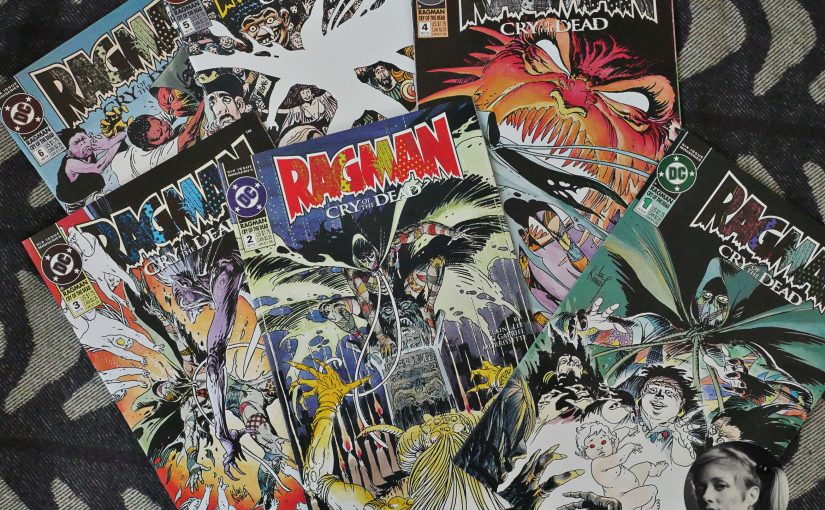 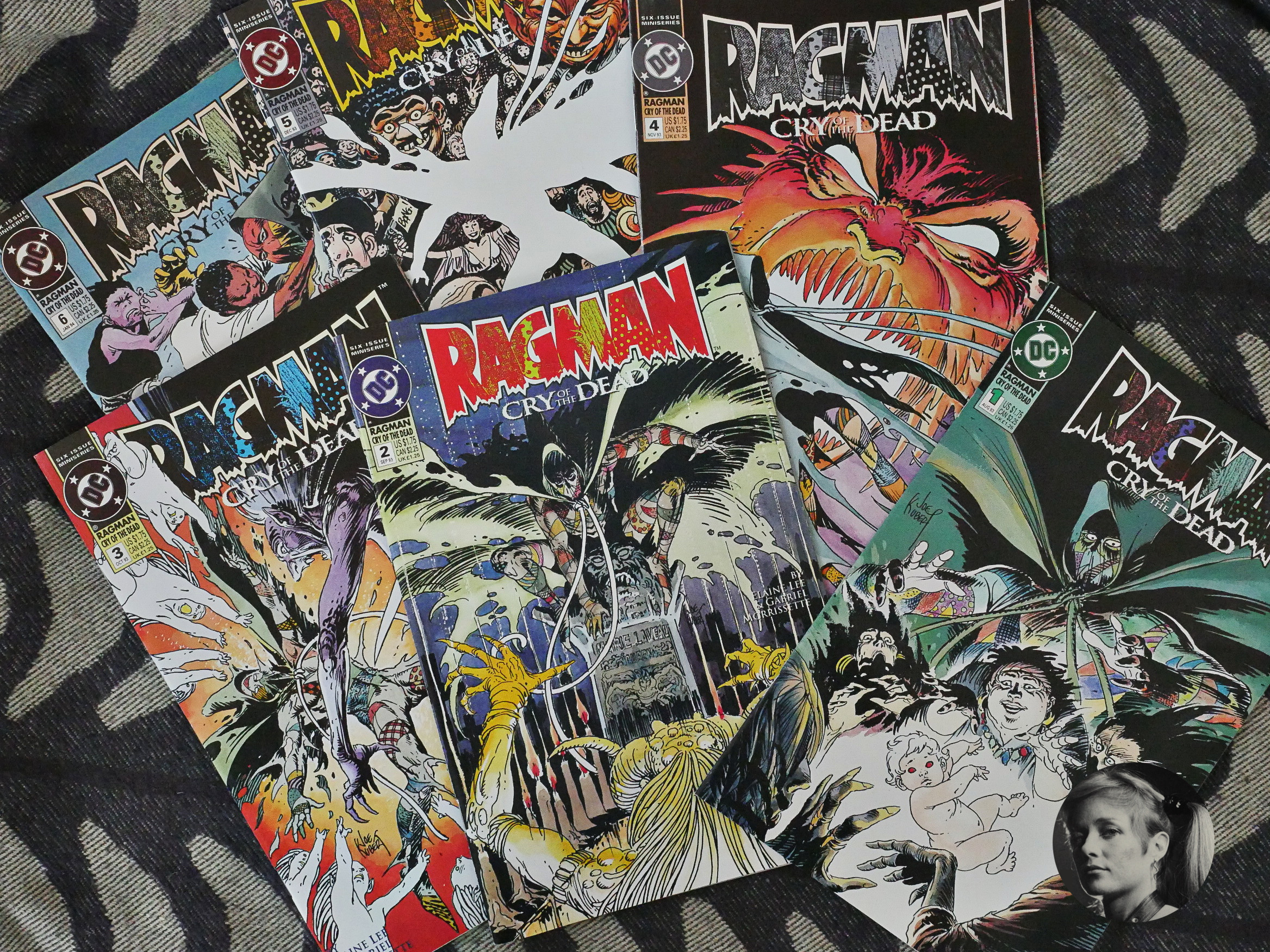 Ragman: Cry of the Dead #1-6 by Elaine Lee and Gabriel Morrissette, published by DC Comics.

(See this for what this blog series is about.)

This is the only series Lee wrote for DC Comics proper, but I’ll be covering her Helix and Vertigo (both DC imprints) later in this blog series. 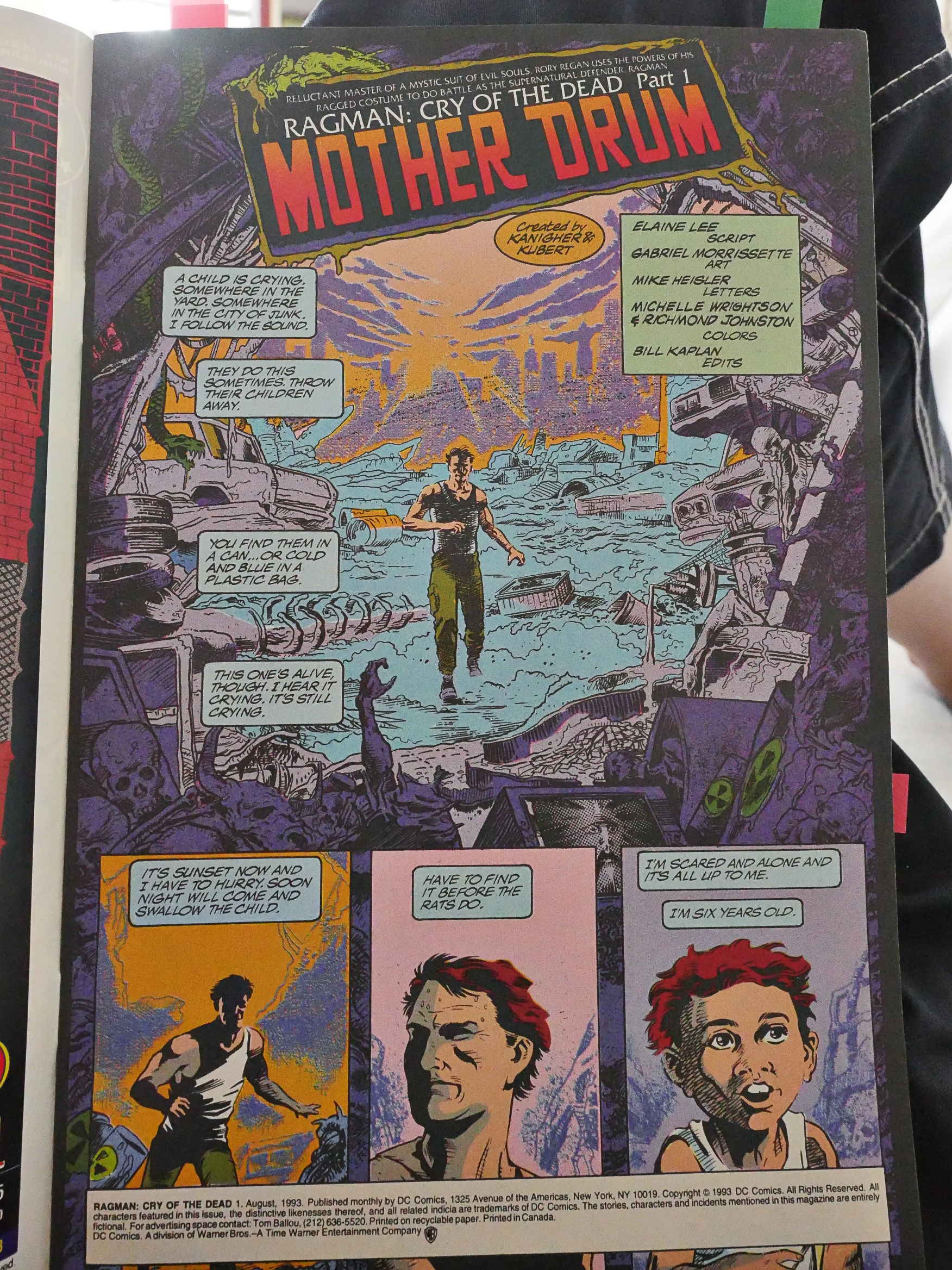 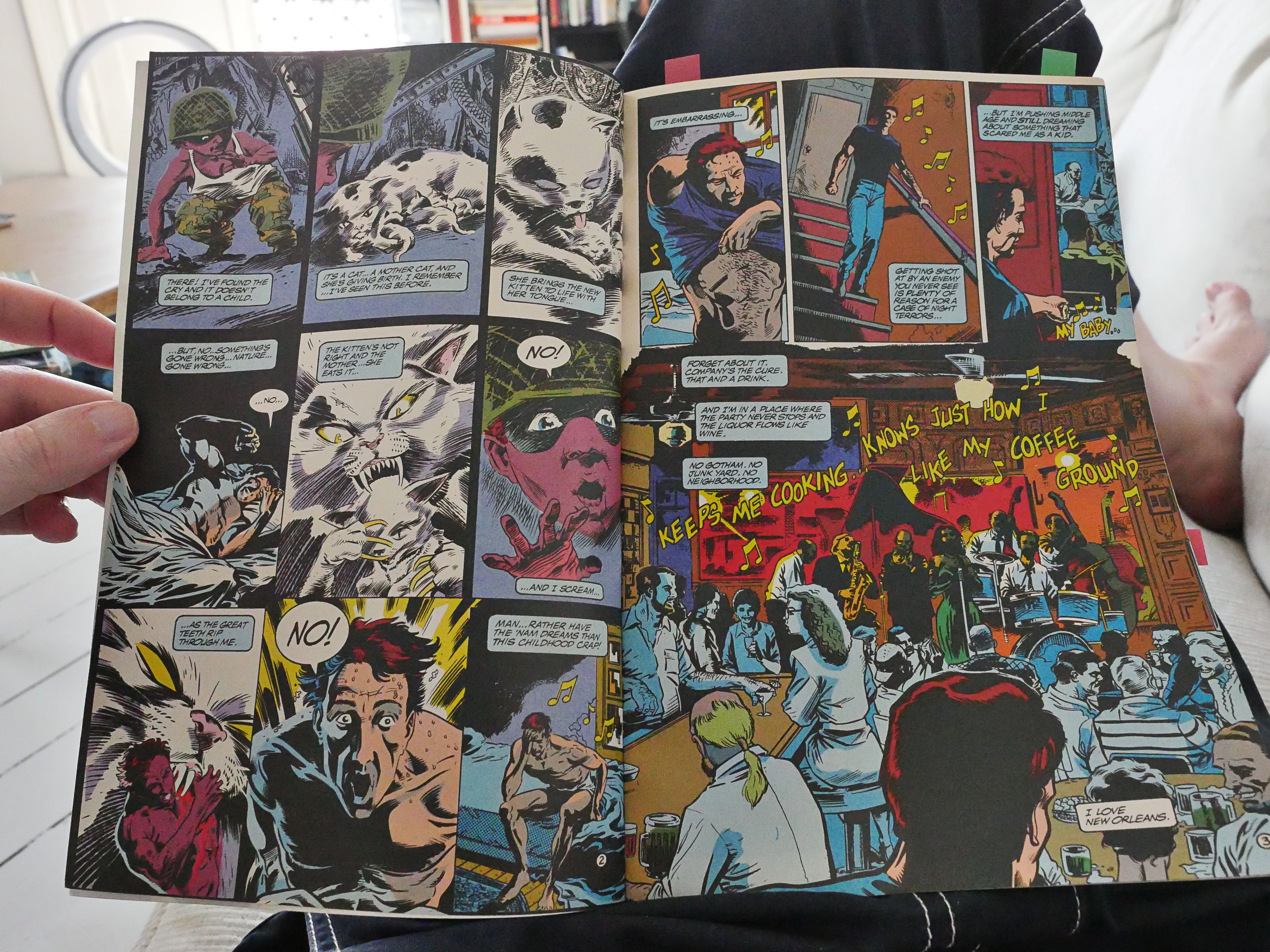 So it starts with a high-intensity dream… and the guy’s a Vietnam veteran? But is dealing with a lot of childhood trauma? Seems fun!

I vaguely remember reading Ragman as a child, but I don’t actually remember anything about the character. He was tied up with the Batman thing, right? DC had such a range of really strange characters and storylines, and I was fascinated by them as a child. They seemed to come from a very different, strange world, while super-hero comics from Marvel were much more mundane. More sci-fi; sure, but less kooky. 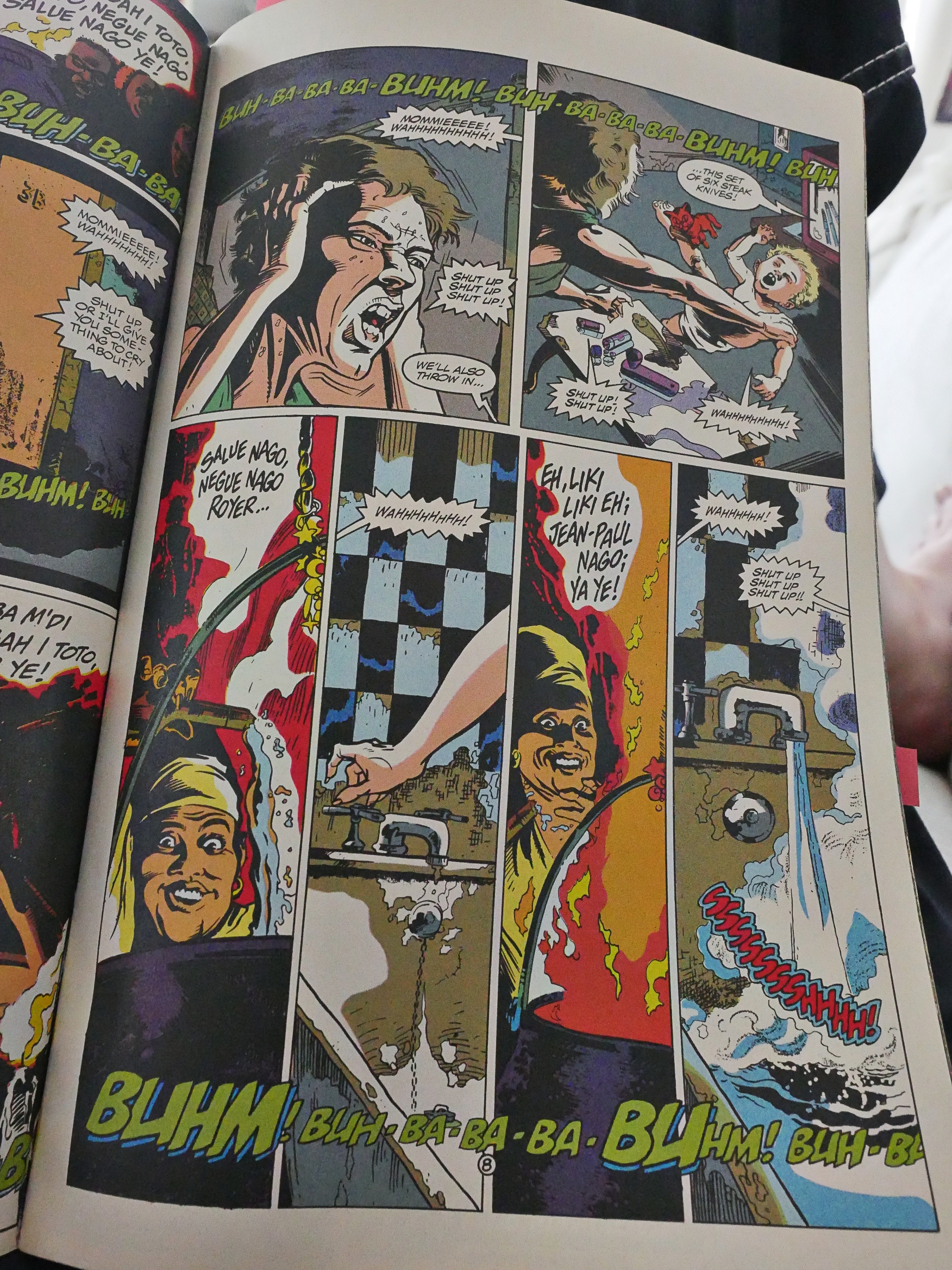 Well… so this is going to be about child abuse? Man. 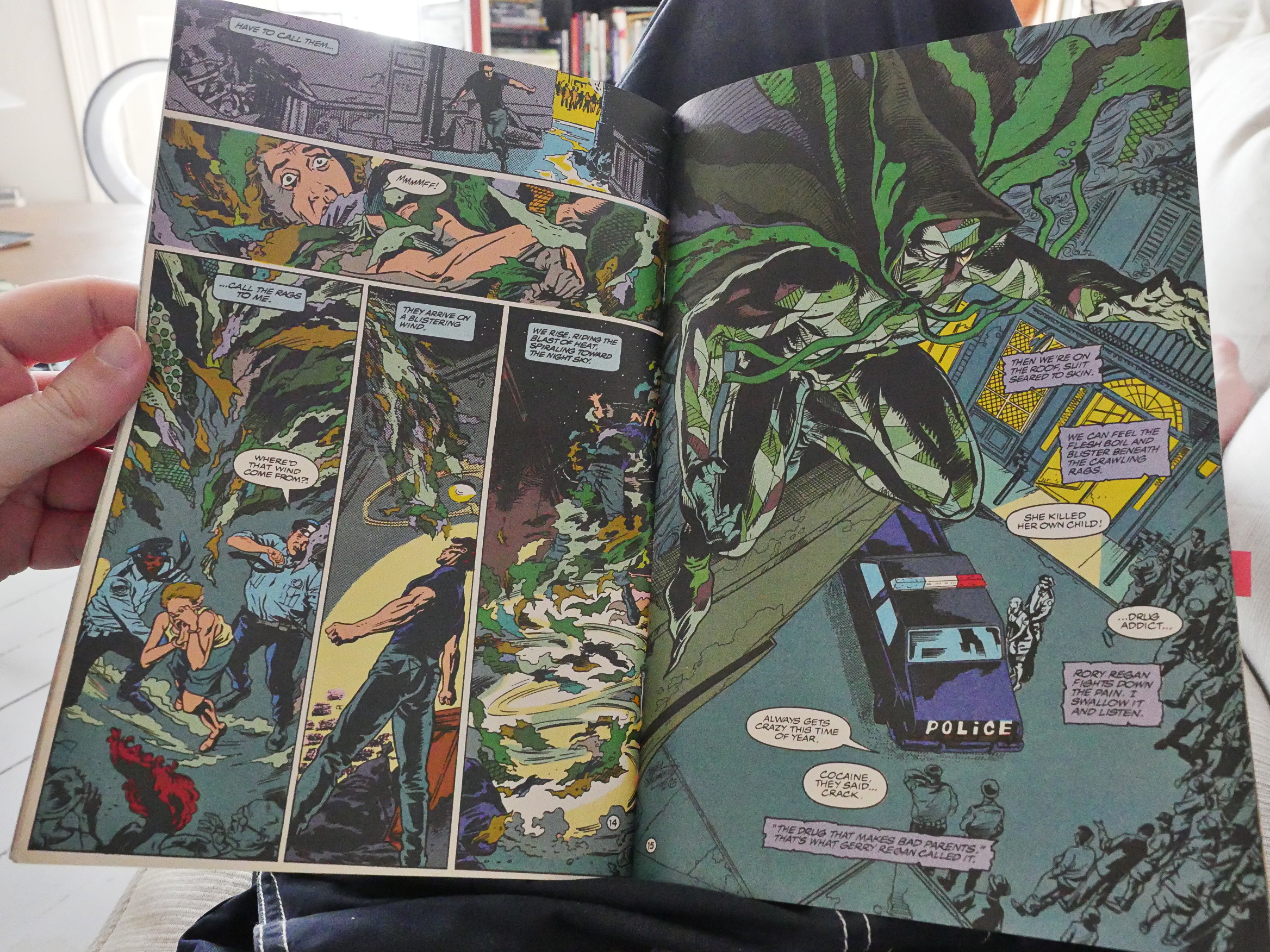 Wha… uhm… Well, OK, this is where they introduce the rags that make the man into the Ragman, and that’s all the explanation we’re getting. In one way, I admire that approach: Over-explaining the premise of the book gets tedious really fast. I mean, you don’t need to say “Superman, who was sent from his home planet Krypton as a child, and” etc… But a guy who seems to be made up out of rags? That could use some explanation. Leaving it out seems odd here, especially since the book is generally otherwise over-written (which is very unlike all the other Lee books I’ve read). 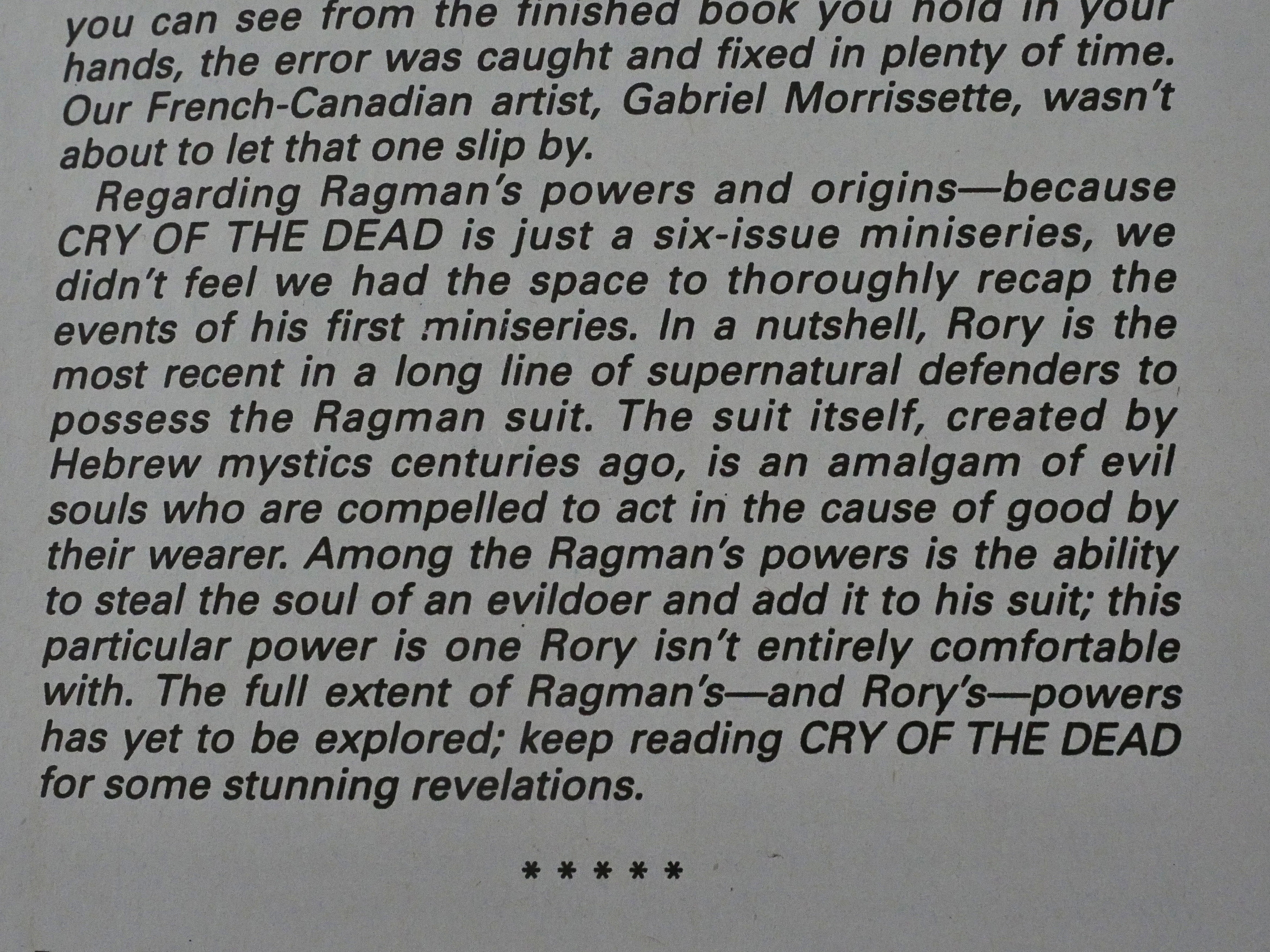 Oh, they explain the Ragman powers on the letters page. Well, that’s helpful! 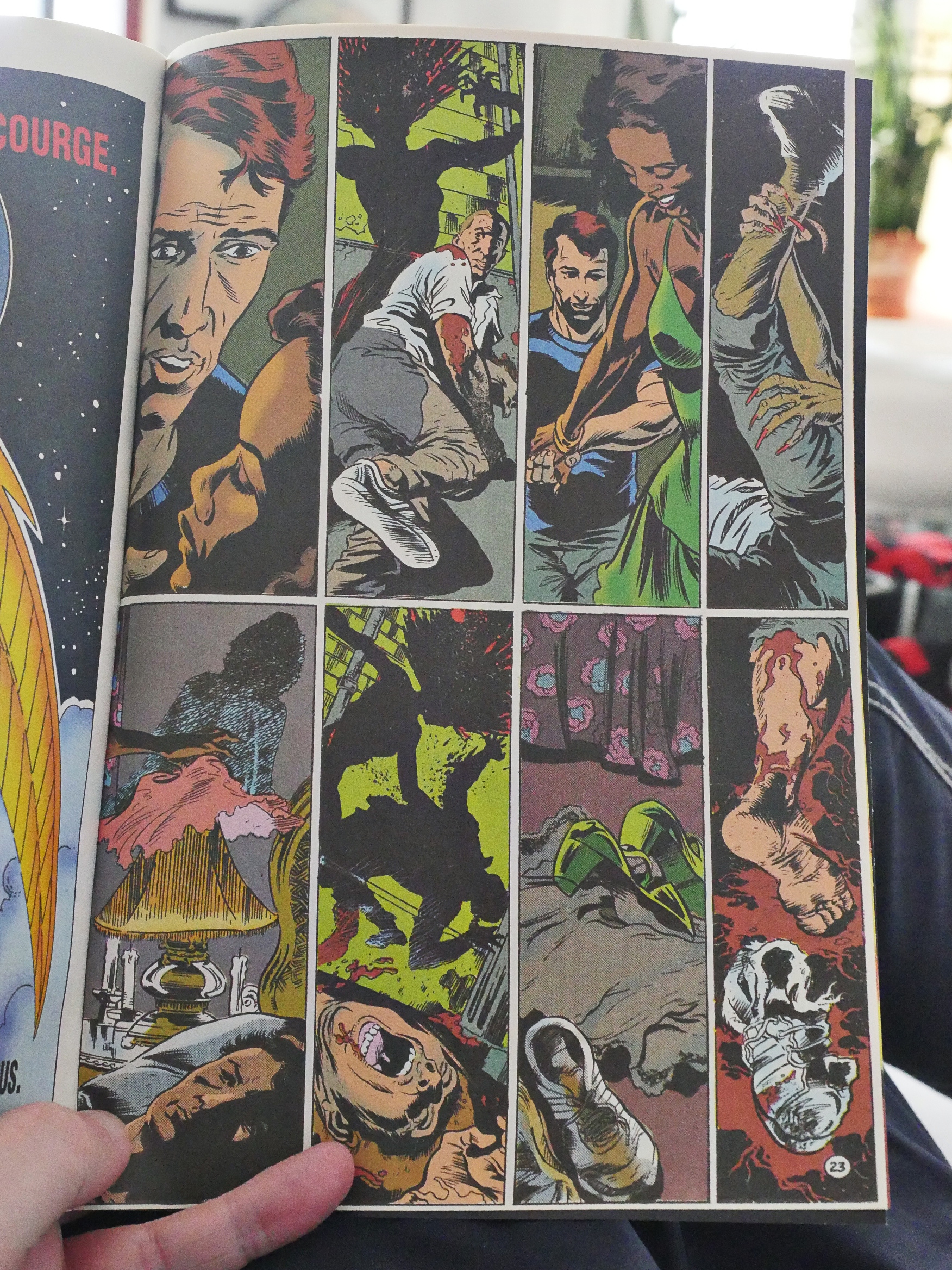 Like I said, there’s a lot of verbiage here — we get the protagonist’s internal monologue and a lot of esplainin about what voodoo is, but then we get this silent sequence. Which would have been nice, if it hadn’t been for the thoroughly trite juxtaposition of people having sex with (apparently) a guy getting killed. 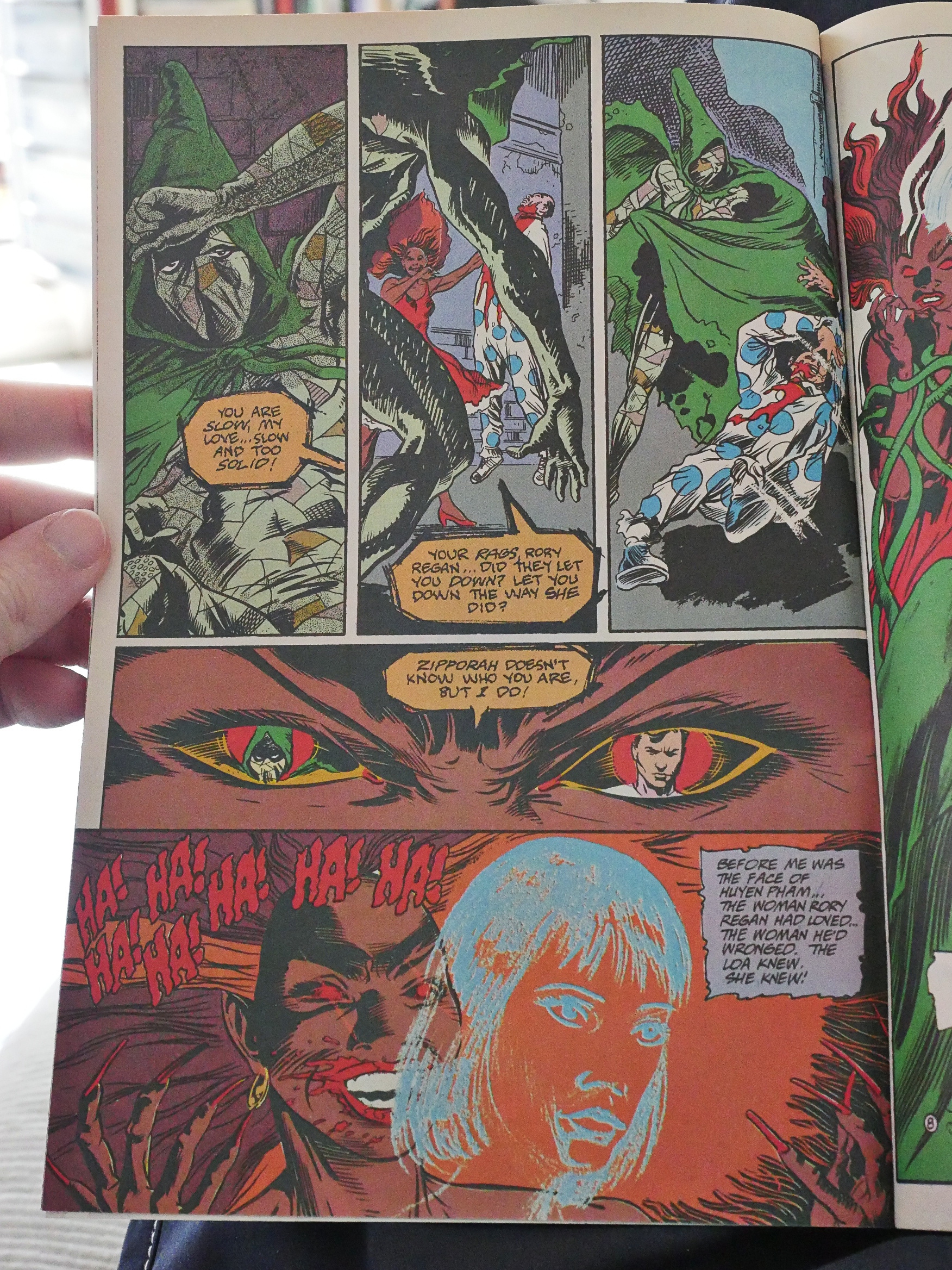 What… “she”? “Let you down”? Is this a callback to a Ragman thing I don’t know about?

In Starstruck (and Ike Garuda), Lee is a master of telling the reader just enough to keep everybody intrigued while pushing the storyline forward (in many directions at the same time, usually). But there’s always enough information there: You just have to pay attention. I feel like there just isn’t enough information here to even tell what’s going on, and I have no confidence that trying to dig through the vagueness will pay off. 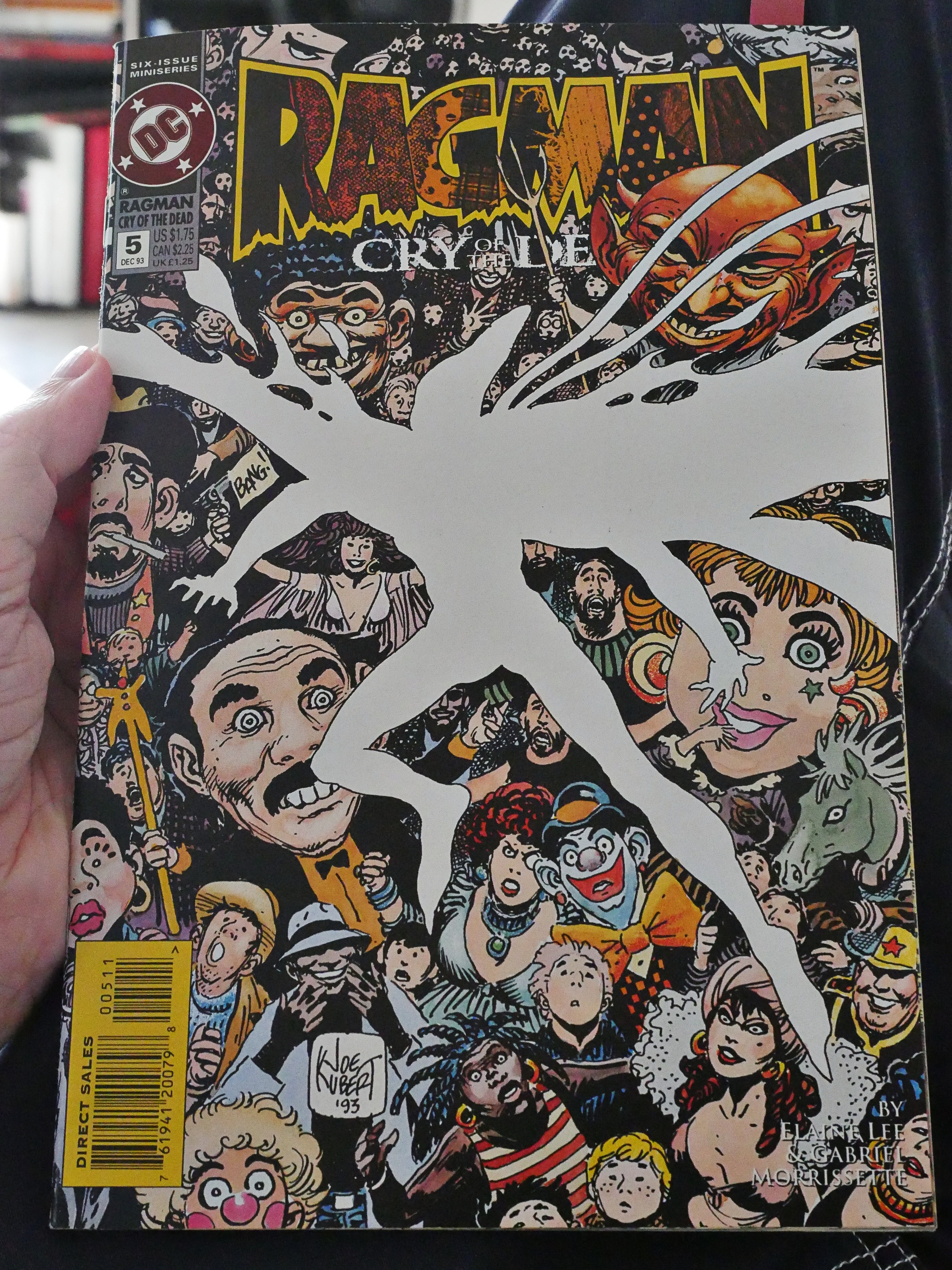 Ragman was created by Kanigher and Kubert, and Kubert does the covers. Quite striking, I think? 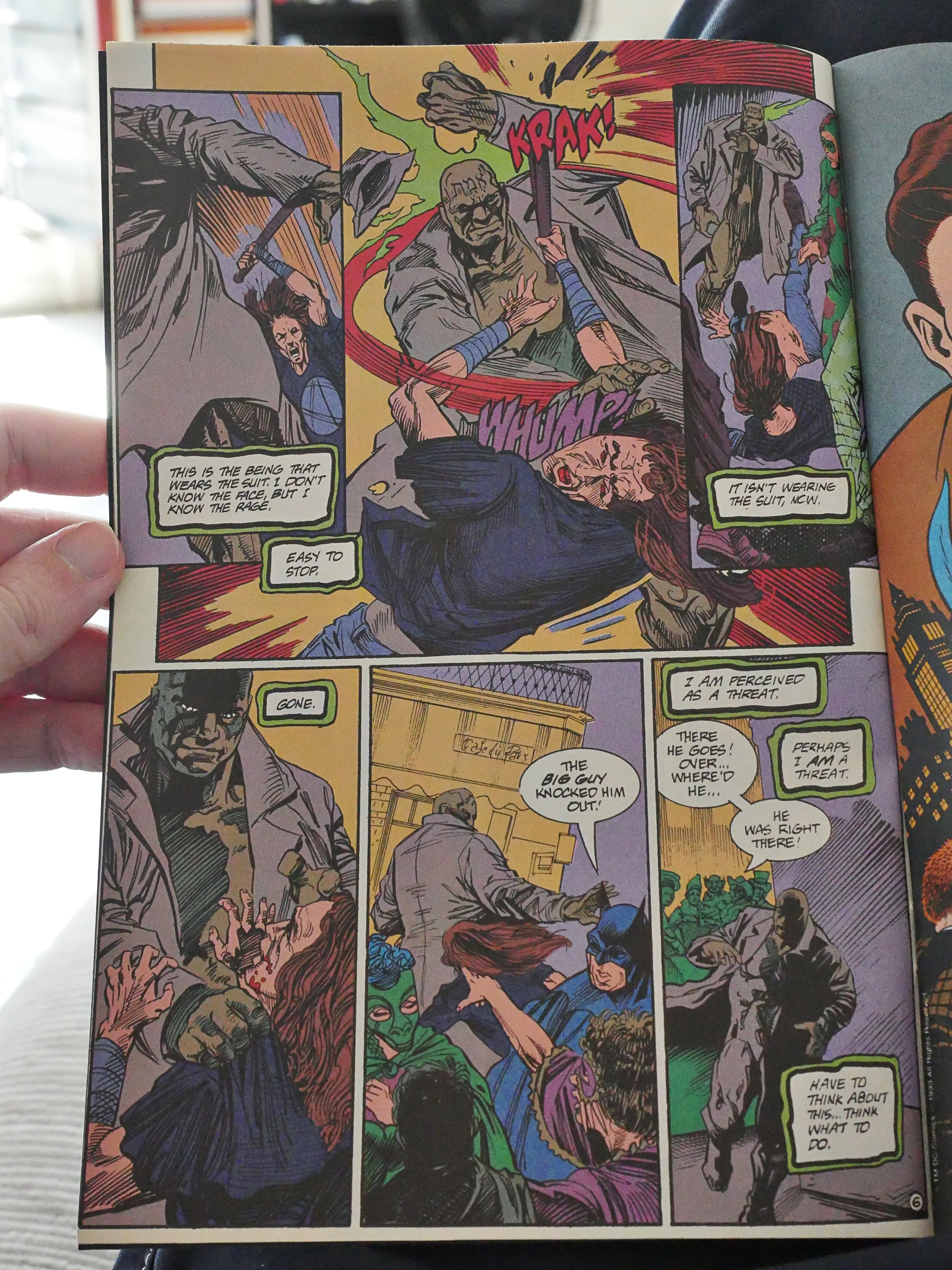 Morrissette’s linework is OK, but there aren’t many storytelling chops on display here. You (that is, I) frequently have to skip back to previous panels to try to make out who did what to whom, and just telling the characters apart is a problem. It doesn’t help that Lee has so many of them, and most of them are possessed by a range of different spirits, so we double up on characters, too… 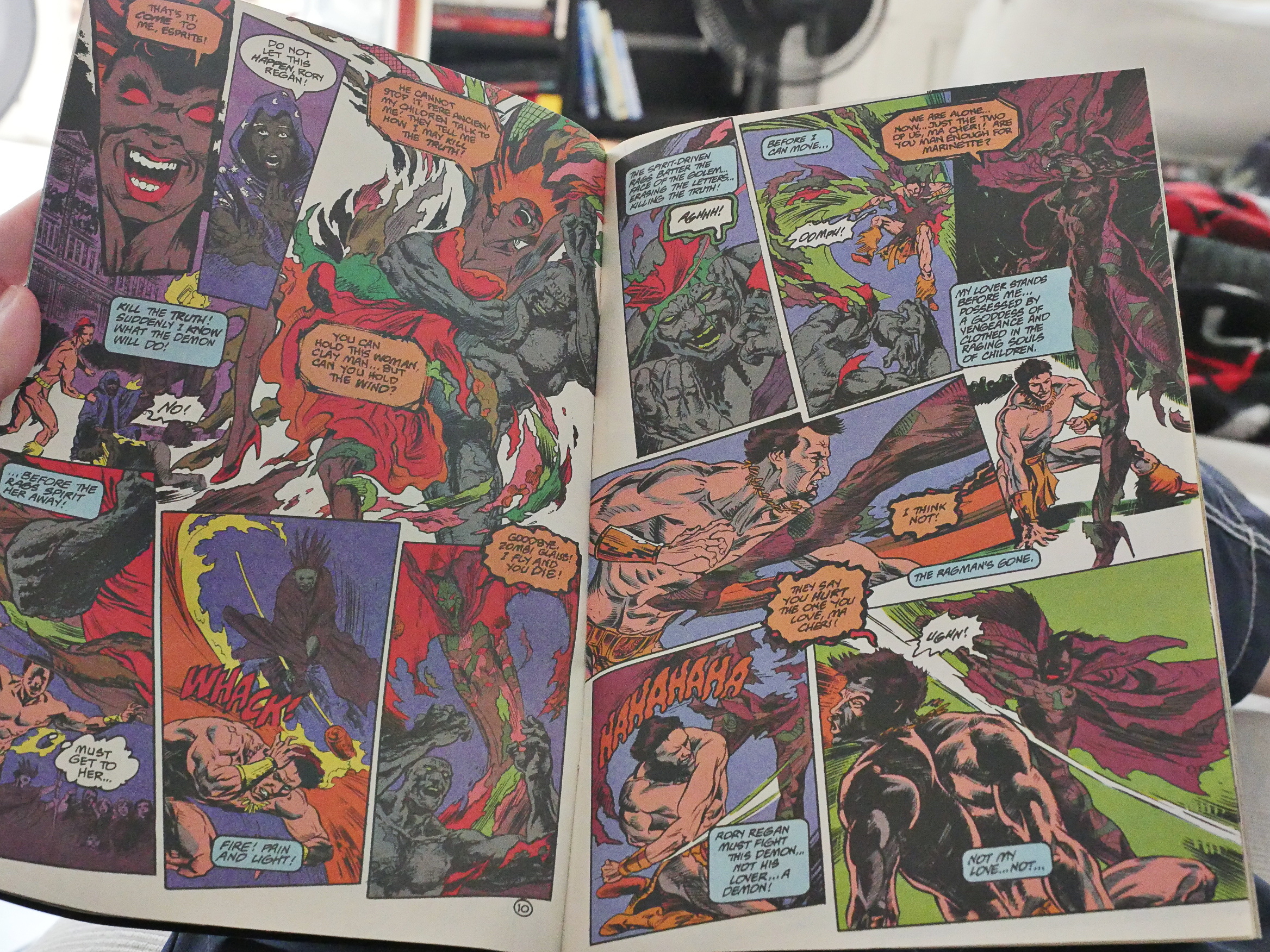 I pretty much gave up during the final two issues to keep track up who all these people and daemons were, because it didn’t seem to be going anywhere interesting. And it didn’t.

The series has never been collected or reprinted, apparently.

I really wonder how it came to be, and whether the, er, verbose incoherence of the book is due to editorial interference.

There aren’t many reviews of it on dar intrawobs, but here’s one:

The series starts out sort of effective. Morrissette’s art is suitably moody and effective, mixing realism with atmosphere (I mentioned it reminded me of Hellblazer artists like Steve Dillon and others but it’s actually more atmospheric than some) and writer Elaine Lee has a good feel for scenes and dialogue. So much so that it actually took two or three issues before I started to feel it had problems.

In short — it kind of carries you along for a bit, but then you can find yourself wondering what you’re reading it for and why.