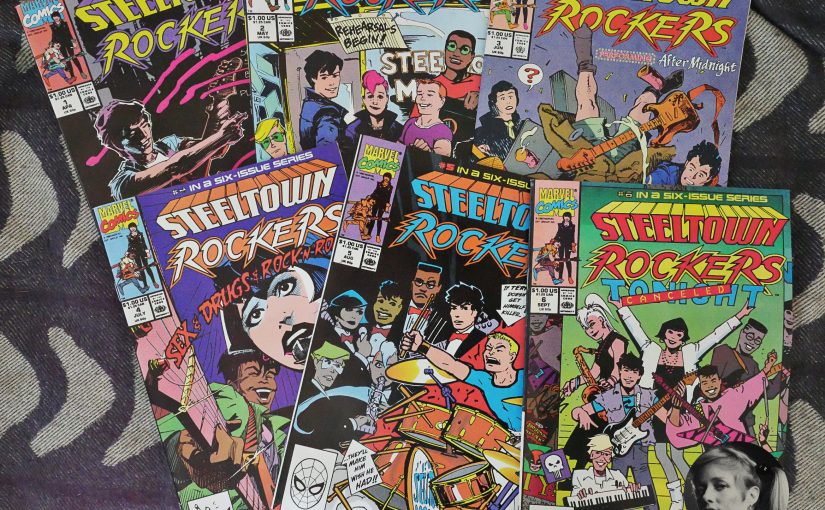 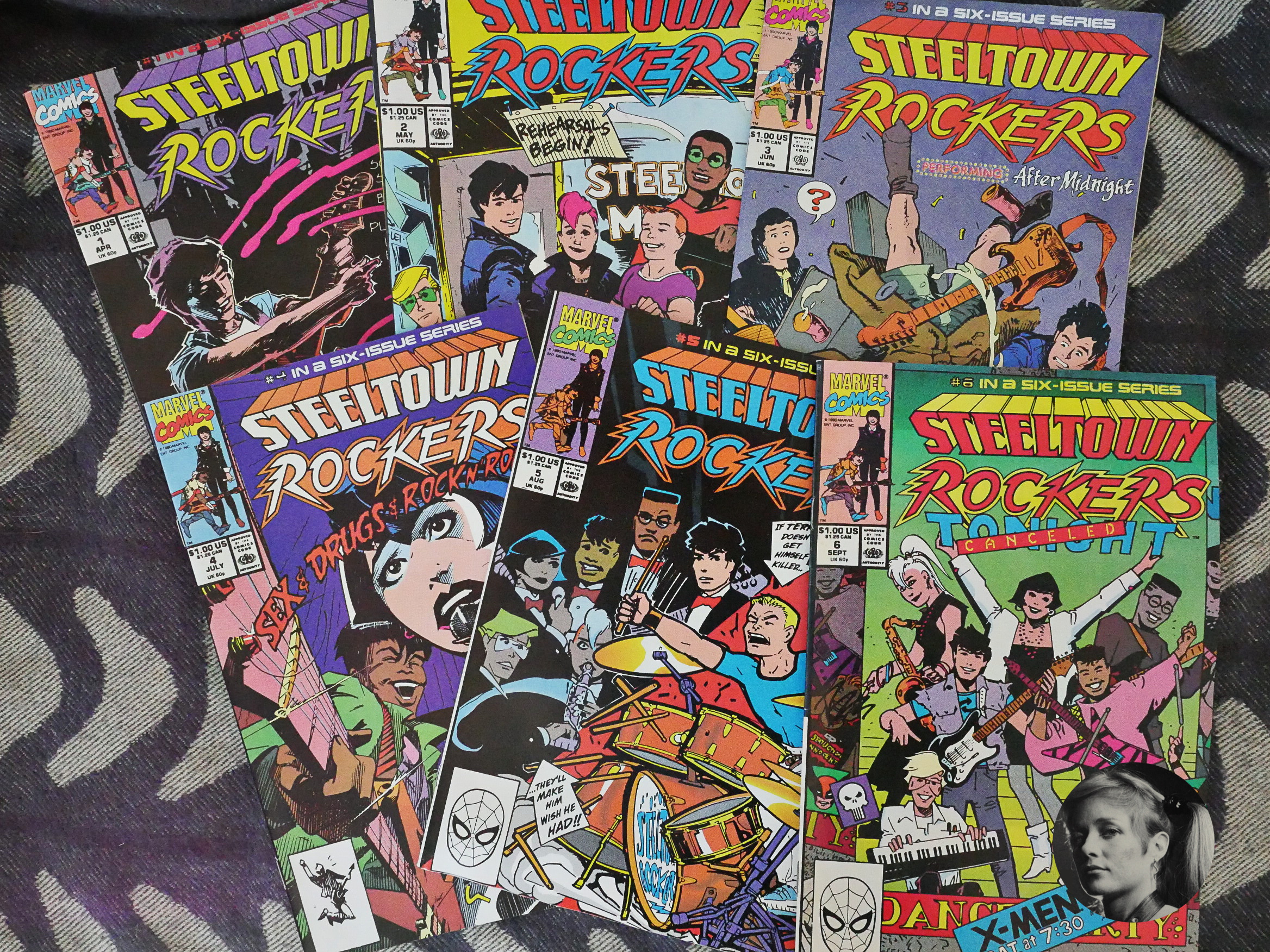 Steeltown Rockers #1-6 by Elaine Lee, Steve Leialoha and others.

I wasn’t planning on doing the Lee comics in chronological order, but I think this may be the earliest one of the ones I’m covering in this blog series, anyway?

Let’s read the first three pages of this mini-series: I’ve always liked Leialoha’s artwork — it’s on the cartoony side of realism, which is the correct side… but his earlier work had all these gorgeous little details, and fun designs and backgrounds. He’s pared it back a lot here: Throughout the series, backgrounds kind of fade a lot of the time…

But I’m really enjoying the storytelling over these three pages: We get a concise view of that guy’s family life, and the short scene with the dad is surprisingly emotional for such a short scene. TV as death, really. 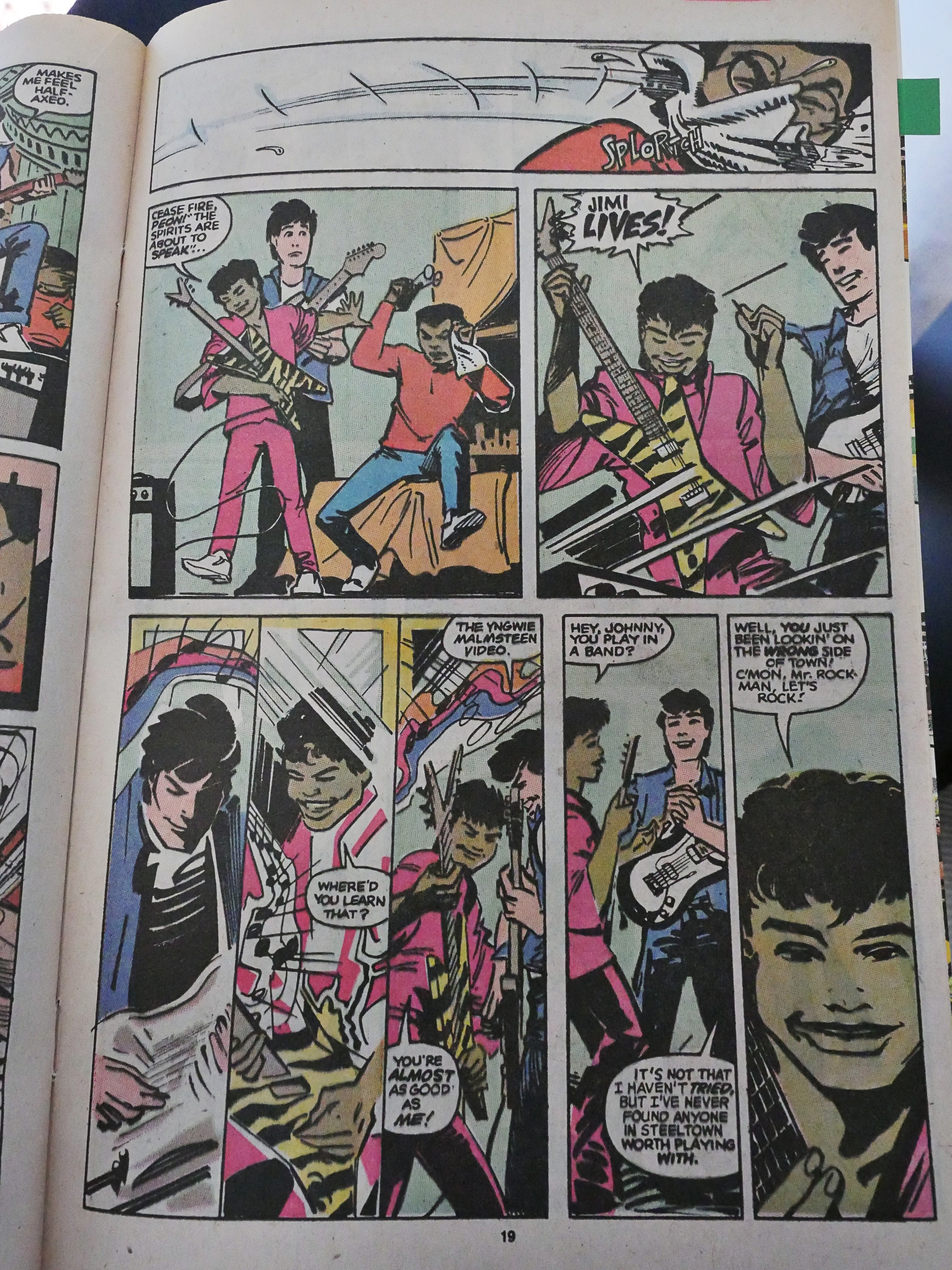 So this is really a comic book, published by Marvel, about a gang of kids starting a rock band? With no super-hero stuff at all? Did Marvel have one of their periodic “let’s try doing something else” periods at the time? And why publish this as a Marvel book instead of an Epic book, where it’d be more of an easy fit?

The copyrights on this book are owned by Marvel (according to the indicia), which makes this all even more puzzling. 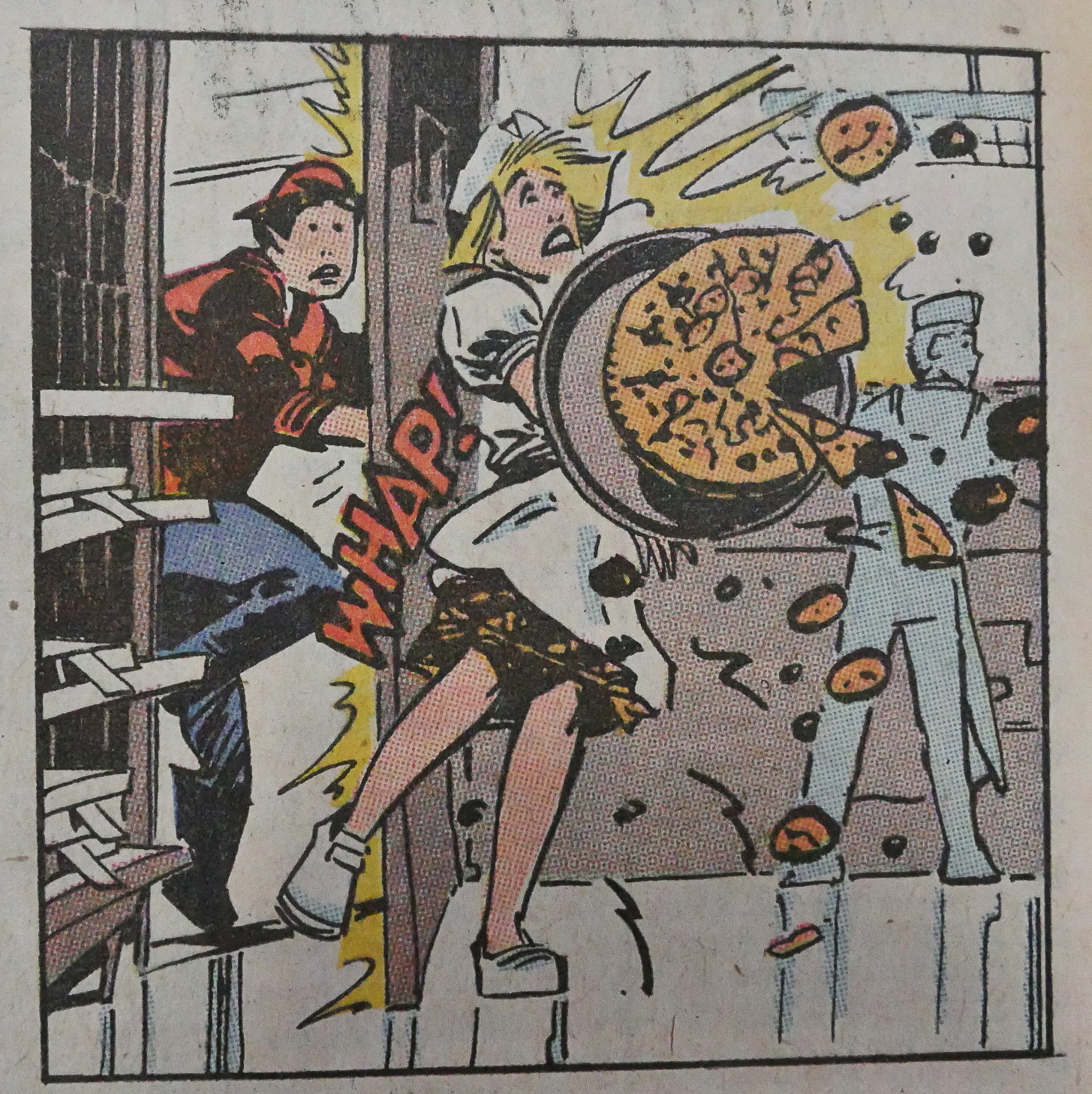 Leialoha’s artwork goes super-deformed in the er action scenes, which is fun. But his figures also seem to grow really short, too, which I think is more due to sloppiness. 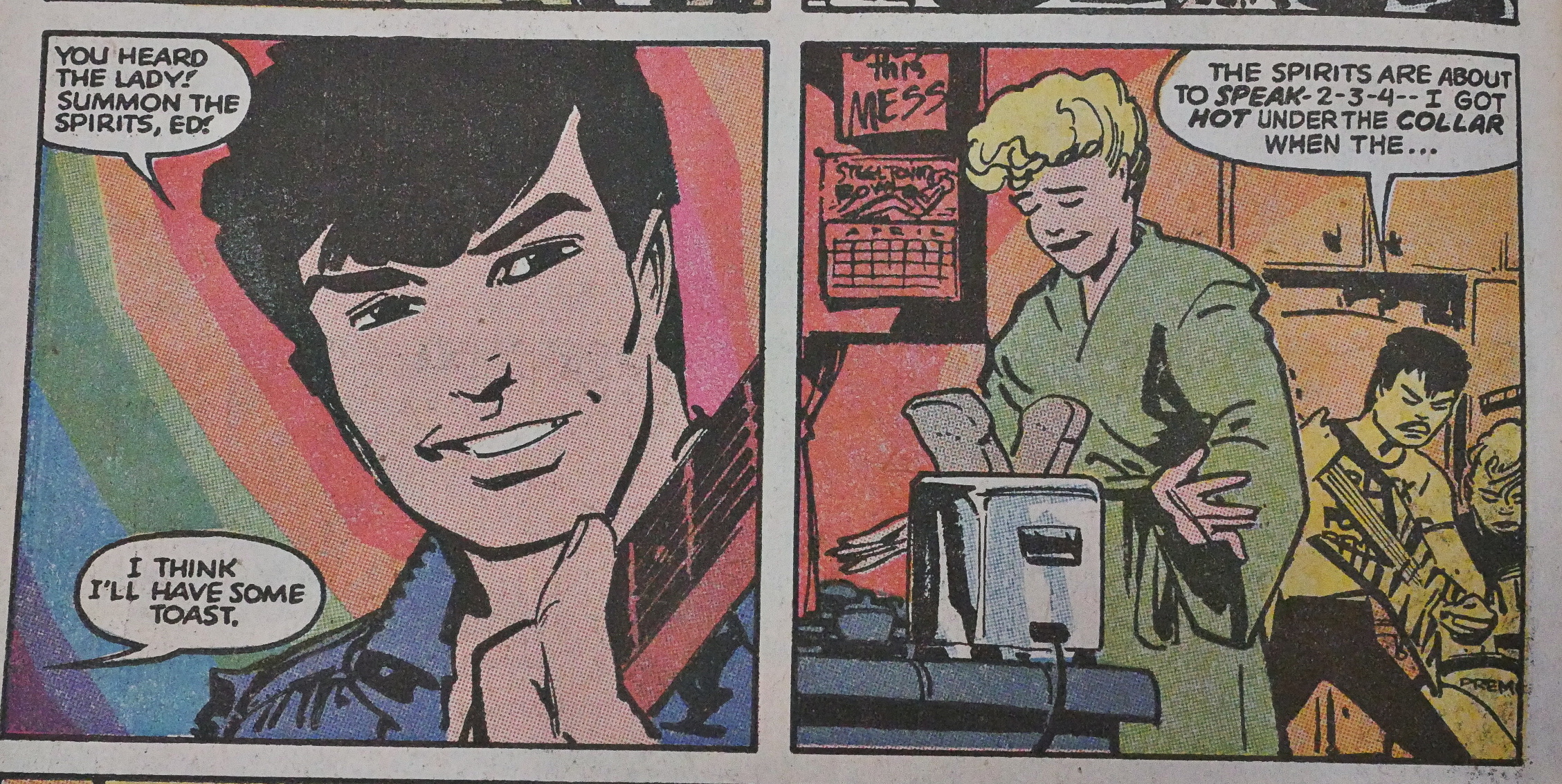 Lee does the colouring for a single issue, and that’s the one with the best (and most entertaining) colouring job. 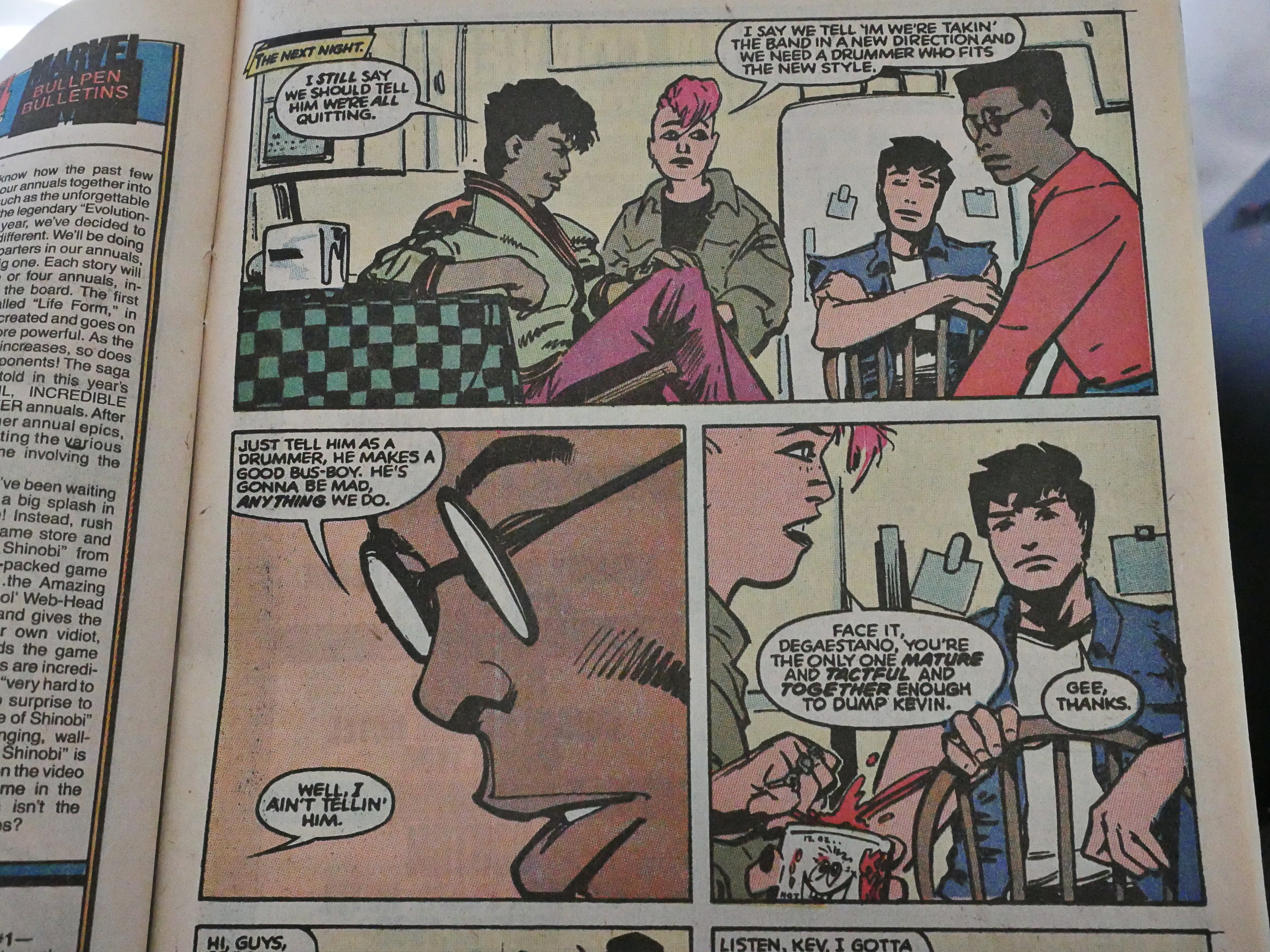 It is a very readable book. The dialogue keeps rolling without any hiccups, and Leialoha is a very… clear… storyteller. And reading about these kids putting a band together is entertaining enough. 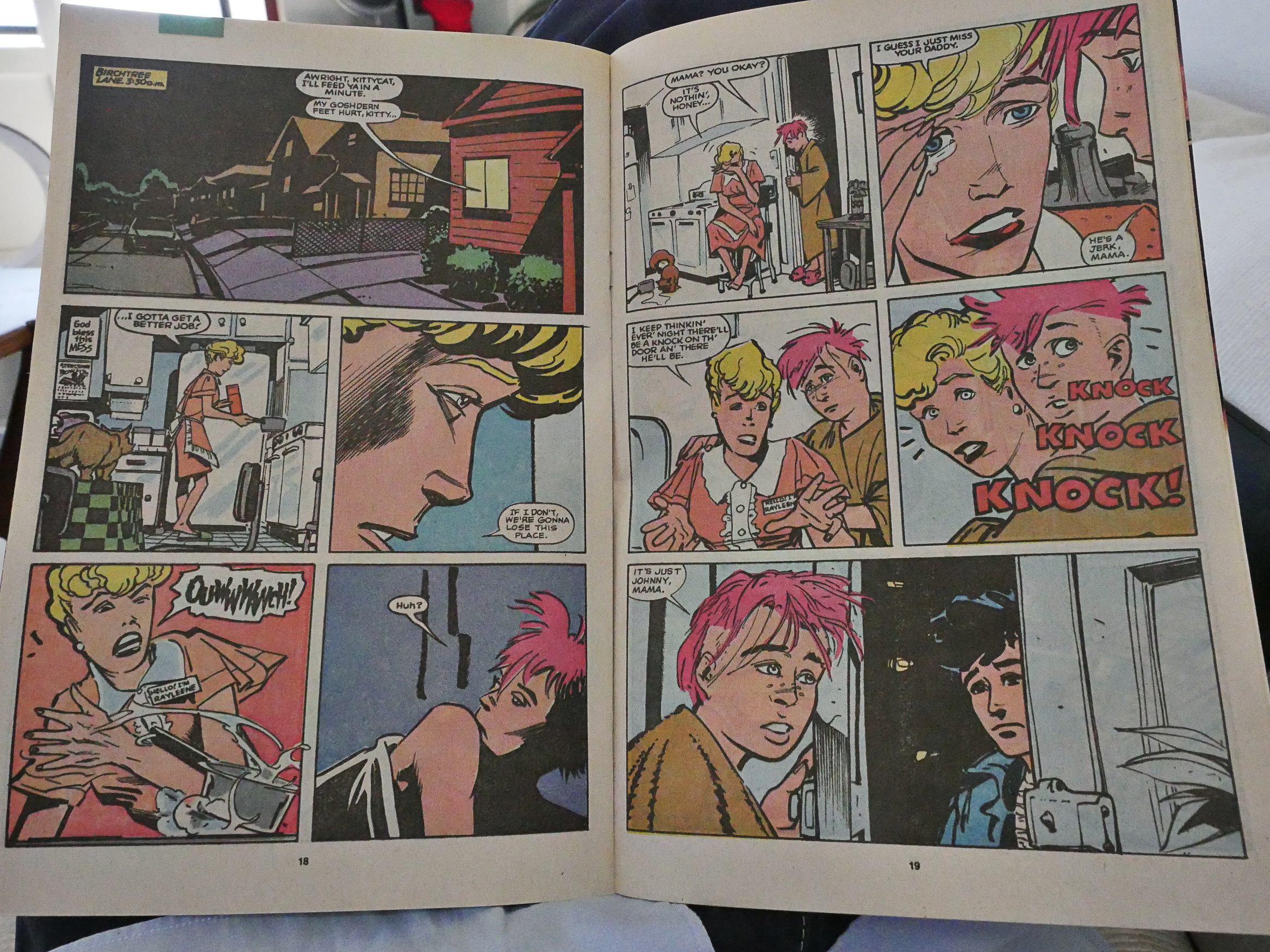 But we also get a peek at the drama in each of the band members’ families (just a handful of pages from each one), and I’m not quite sure that works as well. There’s just so much drama you can take? Even giving the cat food is dramatic, and it’s just a bit much. (Or whatever it is she’s doing… heating up milk?) 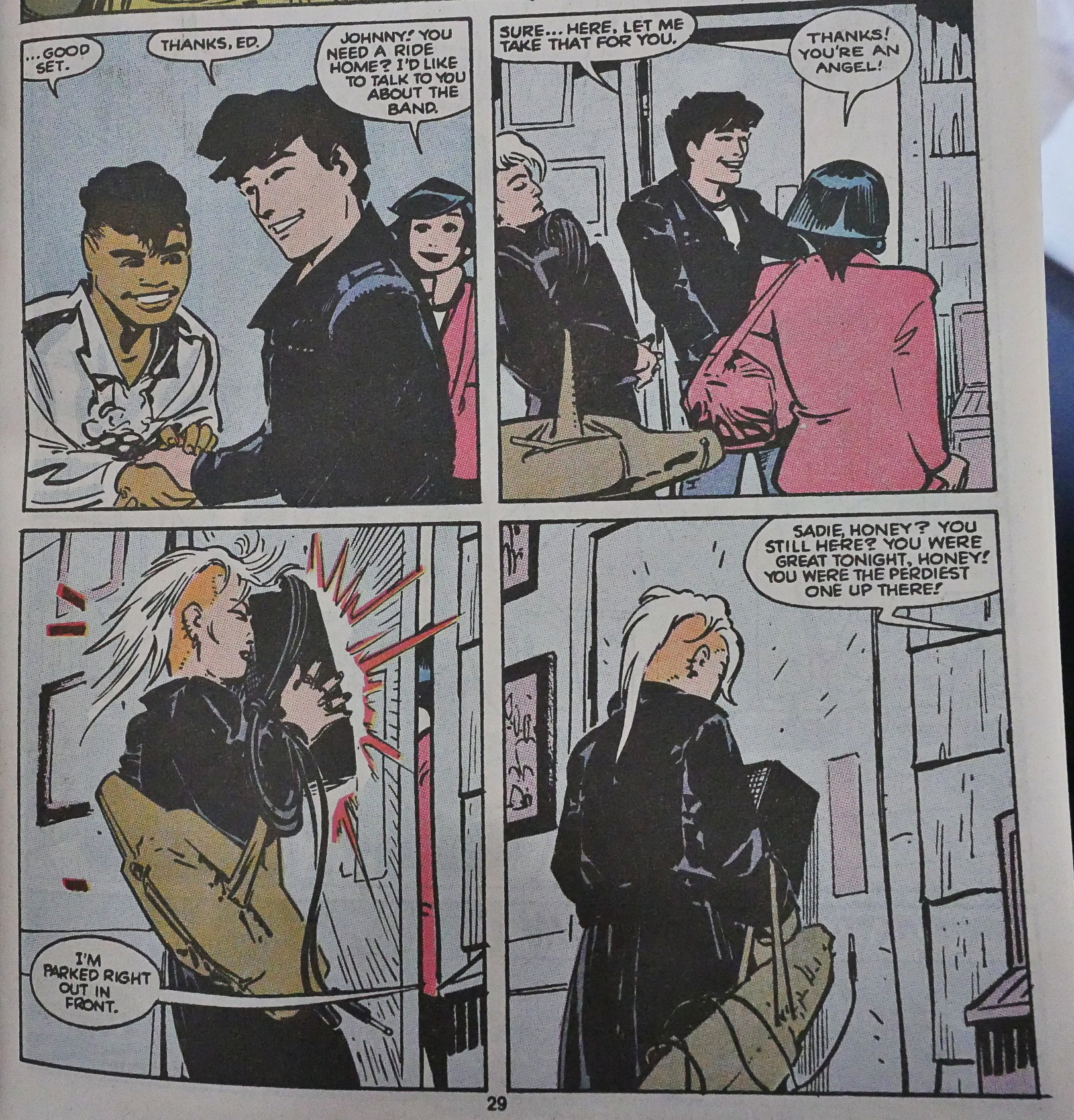 There’s some physical humour, but it’s not really… a funny book? It’s like an 80s teen movie? 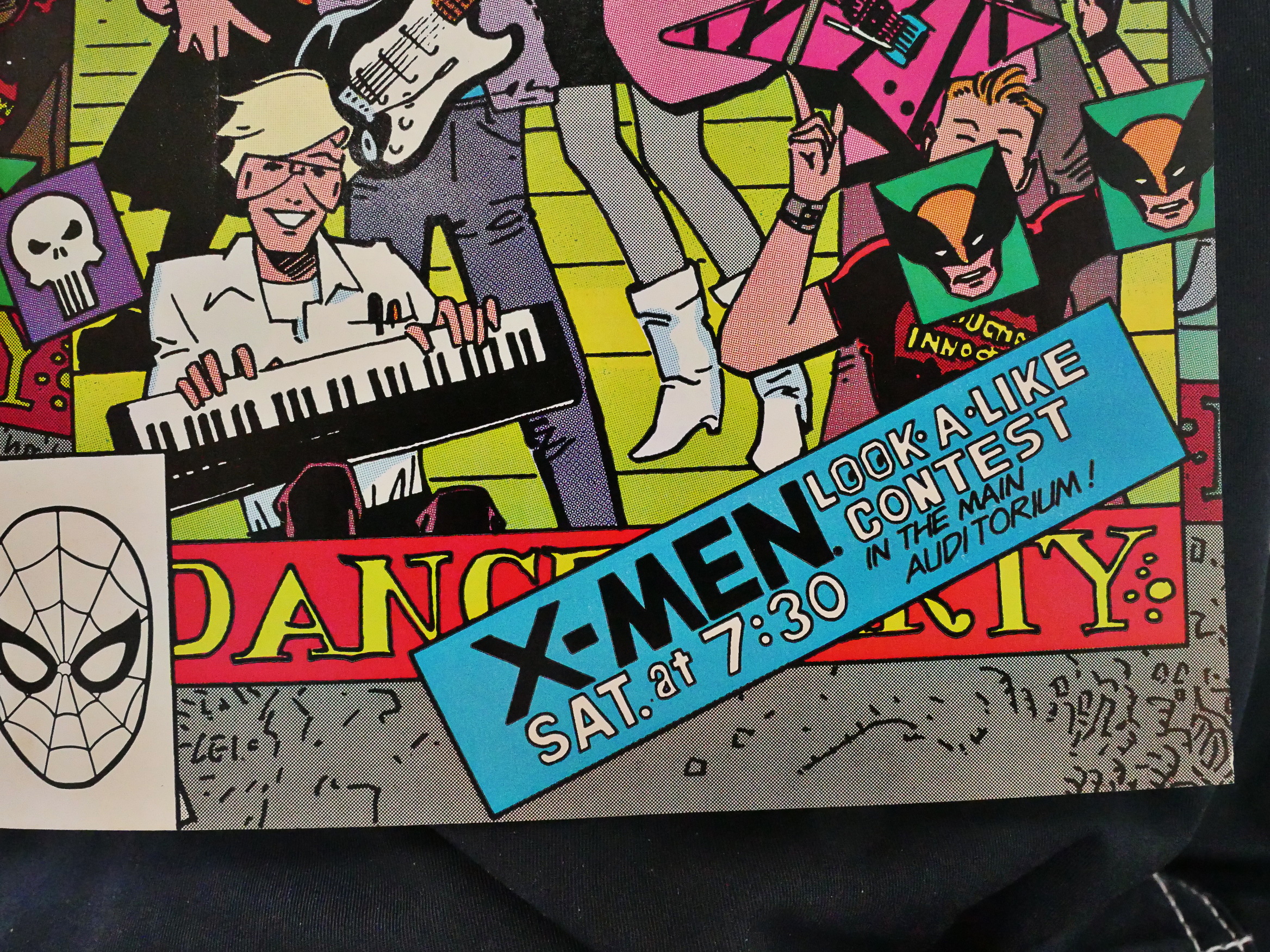 OK, they tried selling the final issue by putting “X-Men” on the cover… 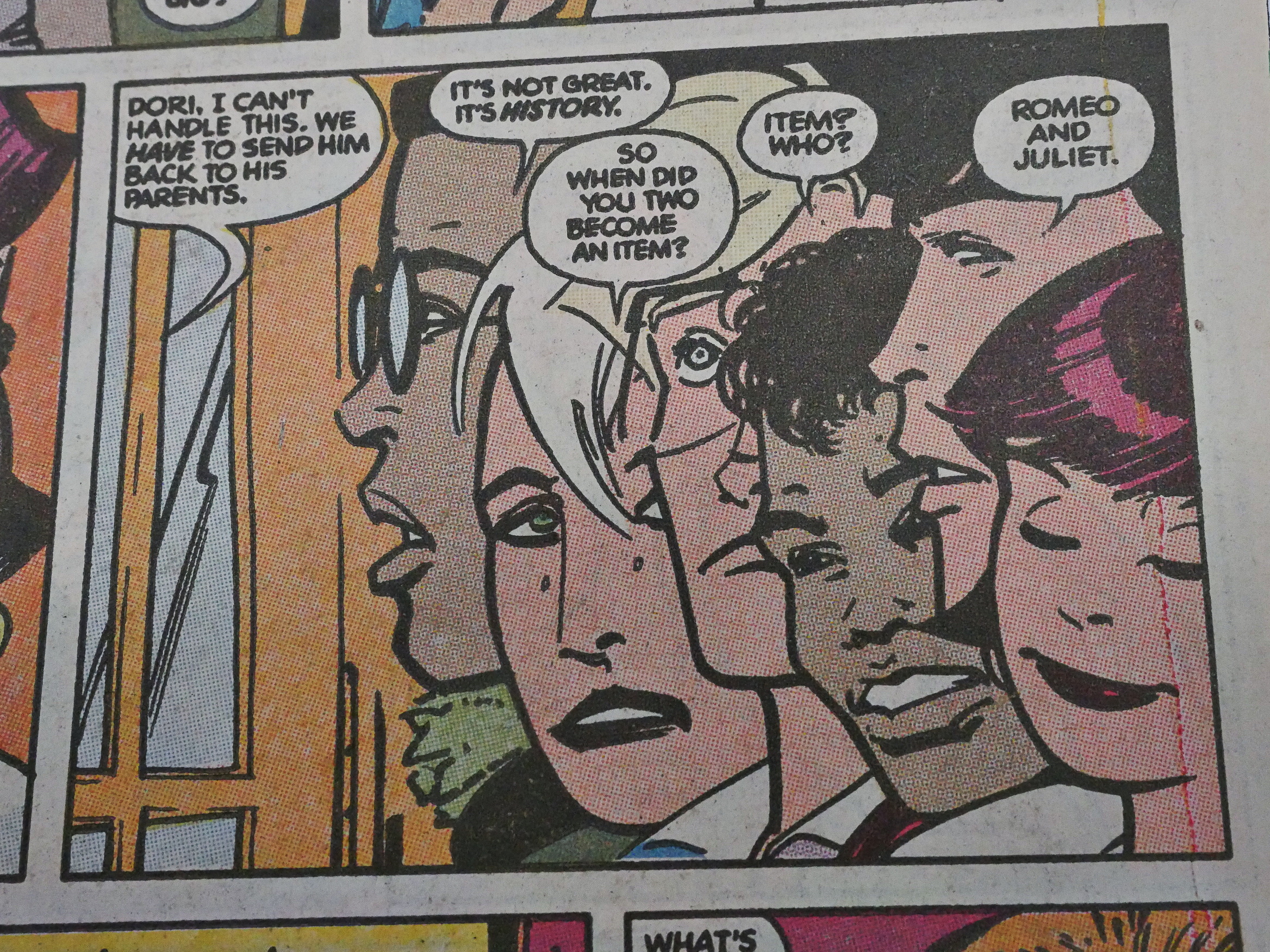 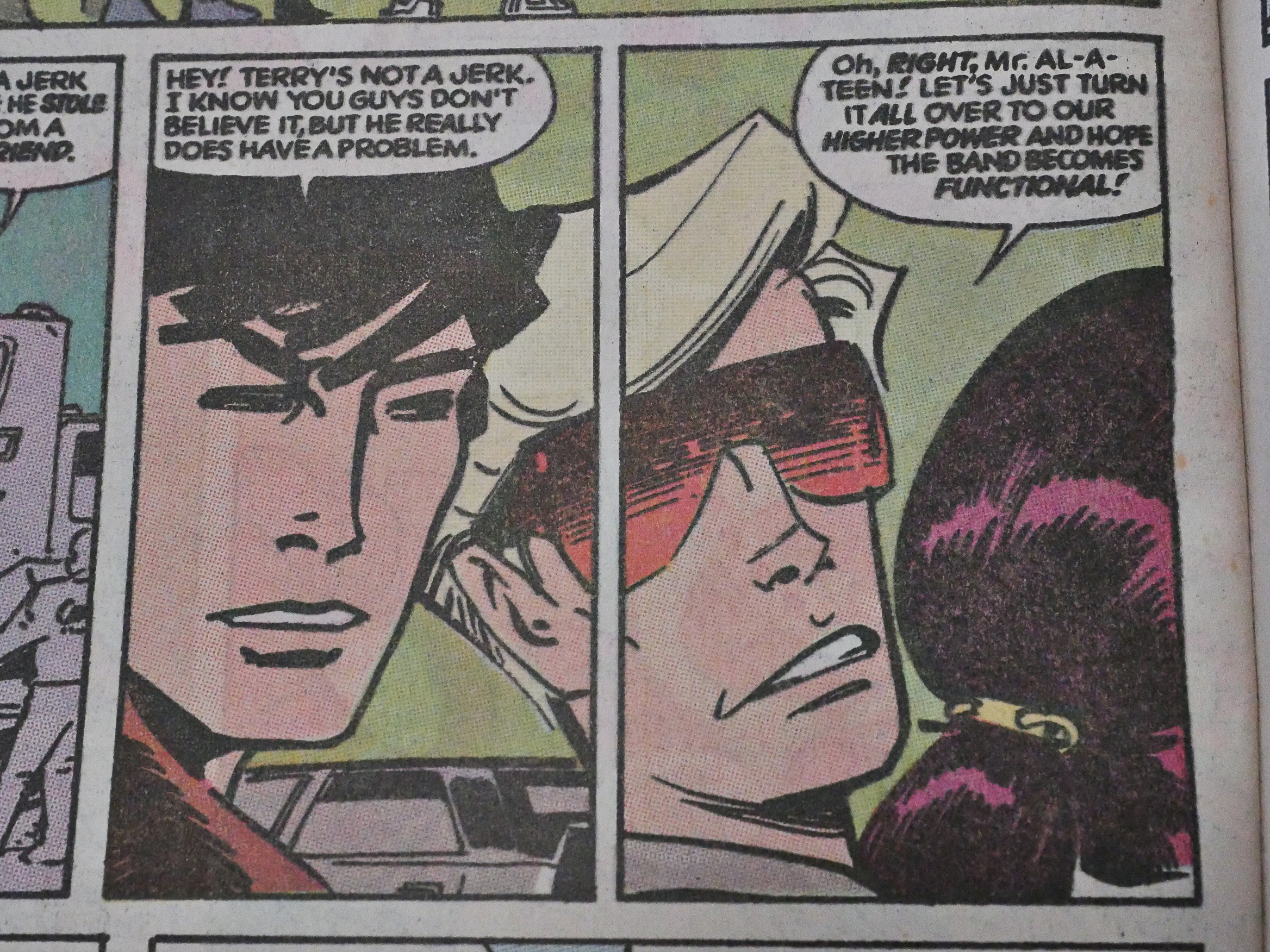 Yeah, and there’s drugs (they’re bad, apparently) and alcohol (even worse) in the storyline.

Well, it’s a perfectly pleasant read — nothing that annoys, really. But there’s not much here to work up much enthusiasm for, either.

What do you get when you combine rock ‘n
roll with Marvel Comics? Why, Steeltown
Rockers, of course.
Everything is on the skids in the town of
Steeltown. The mill has closed down,
threatening to take the town with it. For a
group of local teens, the only thing to do is
form a rock band.
The book promises “romance, rock and
roll, rebellion and realism,” and even a few
things that start with other]etters.
The creative team is no stranger to the
subject. Writer Lee wrote the musical play
Starstruck and artist Leialoha has been a
member of the band• “Seduction of the
Innnocent” Let’s hope this will be better than
that Pat Boone title from the ’60s. –TH—

The book will be completely realistic,
and is aimed at the regular Marvel reader
group—early teenagers—but is hoped to
appeal to girls as well as boys. “There
are no super-heroes, yand not even any
bad guys. Maybe there’s an asshole of
the week,” says Lee. She used her own
childhood experiences and those of her
acquaintances to write the book, but
finds writing a “reality-based” comic
tmk is not always easy, where
the Comics Code is concerned. “If you
have somebody take a drug, do you have
to have five people pop up and tell them
it’s a bad idea, which of course yould
never happen in real life? It’s been hard
because we wanted to deal with the
problems of these kids realistically, and
at the same time, maybe, make it a little
more hopeful, as far as how they solve
their problems. I think that it’s emotion-
ally realistic, for me anyway.

Marvel’s advance hype on Steeltown
Rockers promotes it as “angst in the
X-Men vein—without the mutant
battles.”
I dunno; I just find that description
really amusing. Still, it’s not totally
inaccurate—there aren’t any mutant
battles in this first issue (though there
is a guitar war).
Steeltown Rockers is the story of a
group of blue-collar who sæ
rock music as an escape from their
lives in an economically depressed
city. It’s a pretty familiar idea that’s
been seen before in TV, mwies, and
novels aimed at young teenagers, but
rarely in comics. So kudos to Marvel
for trying something alittle different,
in a format that is potentially acces-
Sible to a young audience.

Although these are mmiliar charac-
ters they all have individual person-
alities and are interesting enough to
hold the tuder’s attention. Elaine Le
has a very good ear for dialogue. The
story is told via conversations and
actions; thought balloons captions
are almost non-existent.
ne result is a story that moves
quickly and smoothly. The pacing of
this issue is not unlike that of the first
act of a play or mwie (Not
considering Lee’s previous writing
include the Starstruck play
comic book adapntion).
Artwork Steve Leialoha is al’*ays
a welcome sight to these eyes, and this
comic is no exception. Leialoha is one
of the handful of artists who can draw
believeable characters, a necessity for
a “real world” story such as this. As
Lee uses dialogue to pace the story,
Leialoha successfully combines a
variety of art styles throughout it to
set the mood.
Despite the rather formula plot and
characters, Steeltom Rockers is worth
a look. Lee and Leialoha are trying
something a little bit different here,
and while it undoubtedly won’t appeal
to everyone, I found it a lot more
enjoyable (and readable) than Marvel’s
usual super-hero fare.
GRADE: ! ! !

The series has never been collected or reprinted, so there are few reviews of it on der intarwebs, but here’s one:

And for all the working-class melodrama, it’s a really entertaining read. The text is minimal, the art evocative, the story compelling; occasionally sublime, largely ridiculous, totally rock and roll.

Not everybody was as impressed:

On a side note — much to my surprise, in the course of my research on the book I found that Steeltown Rockers apparently has a bit of a following. It even has a Facebook page. So maybe I’m just the one out of touch. Maybe I need more small town poverty experience (Gritty!) to really appreciate Steeltown Rockers. Maybe I need to listen to more early Springsteen and Yngwie Malmsteen. Maybe I need to stop being a snob and understand the inherent beauty and gritty reality of this comic. Or maybe liking a book like Steeltown Rockers is just ironic enough now that it has been co-opted into the new hipster cool.

“A 1990 Marvel comic about some teens who form a rock band” might sound like an ideal candidate for Nobody’s Favorites in theory, but — stupid title aside — Elaine Lee and Steve Leialoha’s Steeltown Rockers ended up winning me over with its goofy charm.

Oh, there was an interview with the creators in TwoMorrows’ Back Issue #101:

And it was originally supposed to be an ongoing series (according to Lee; Leialoha says that 12 issues were planned), but Hama left Marvel, and the editors there didn’t have much enthusiasm for the project (which had been in the pipeline since 1986), but finally published it as a six-issue mini-series.