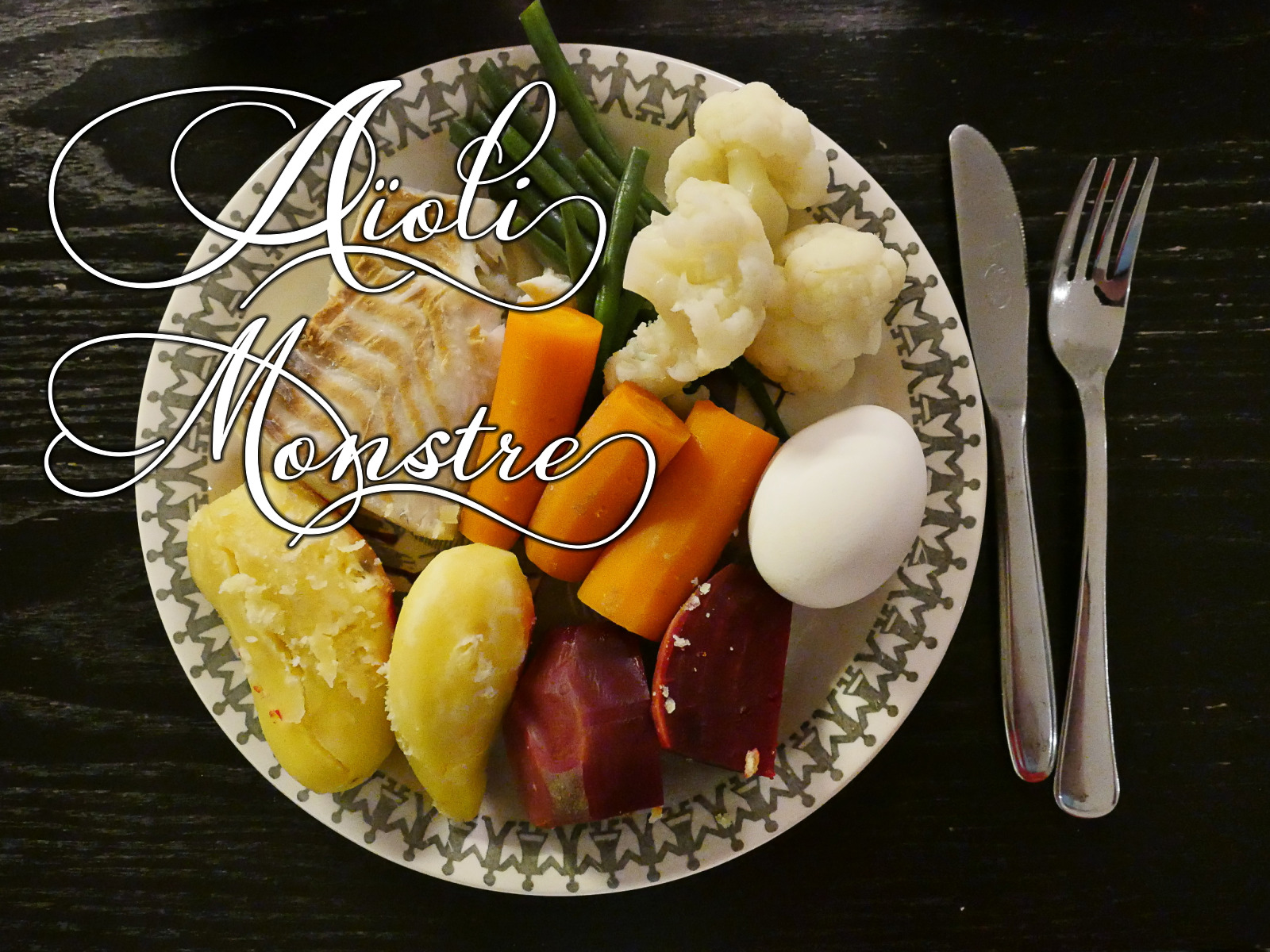 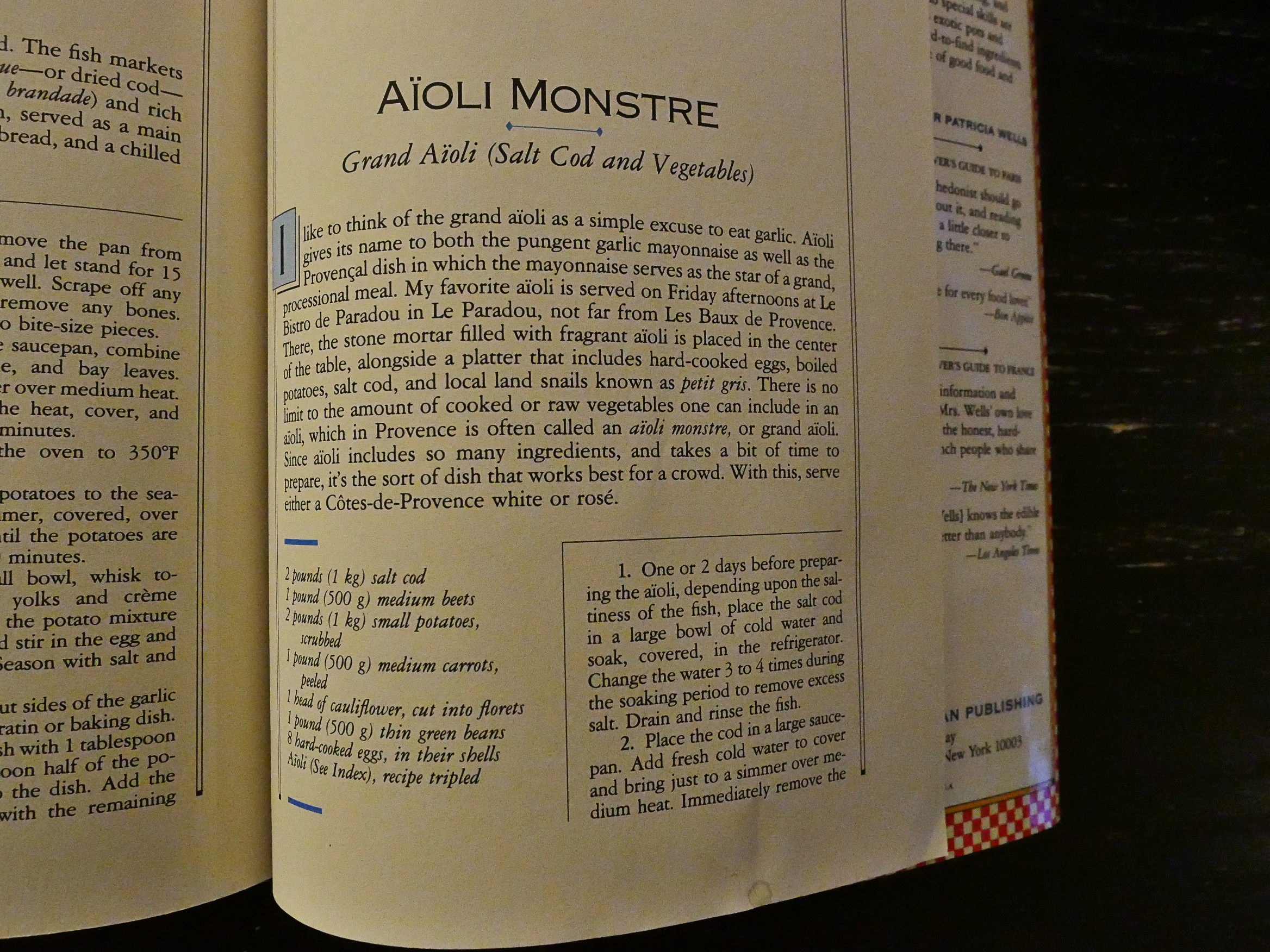 The previous salt cod dish from the Bistro Cooking book was delicious, so I’m all excited about this one: Lots of veggies, cod and aioli. The only thing that’s odd about this recipe is its name: Grand aioli. I mean, that’s just the sauce.

So this is a two-for-one dish, because I’m also making this: 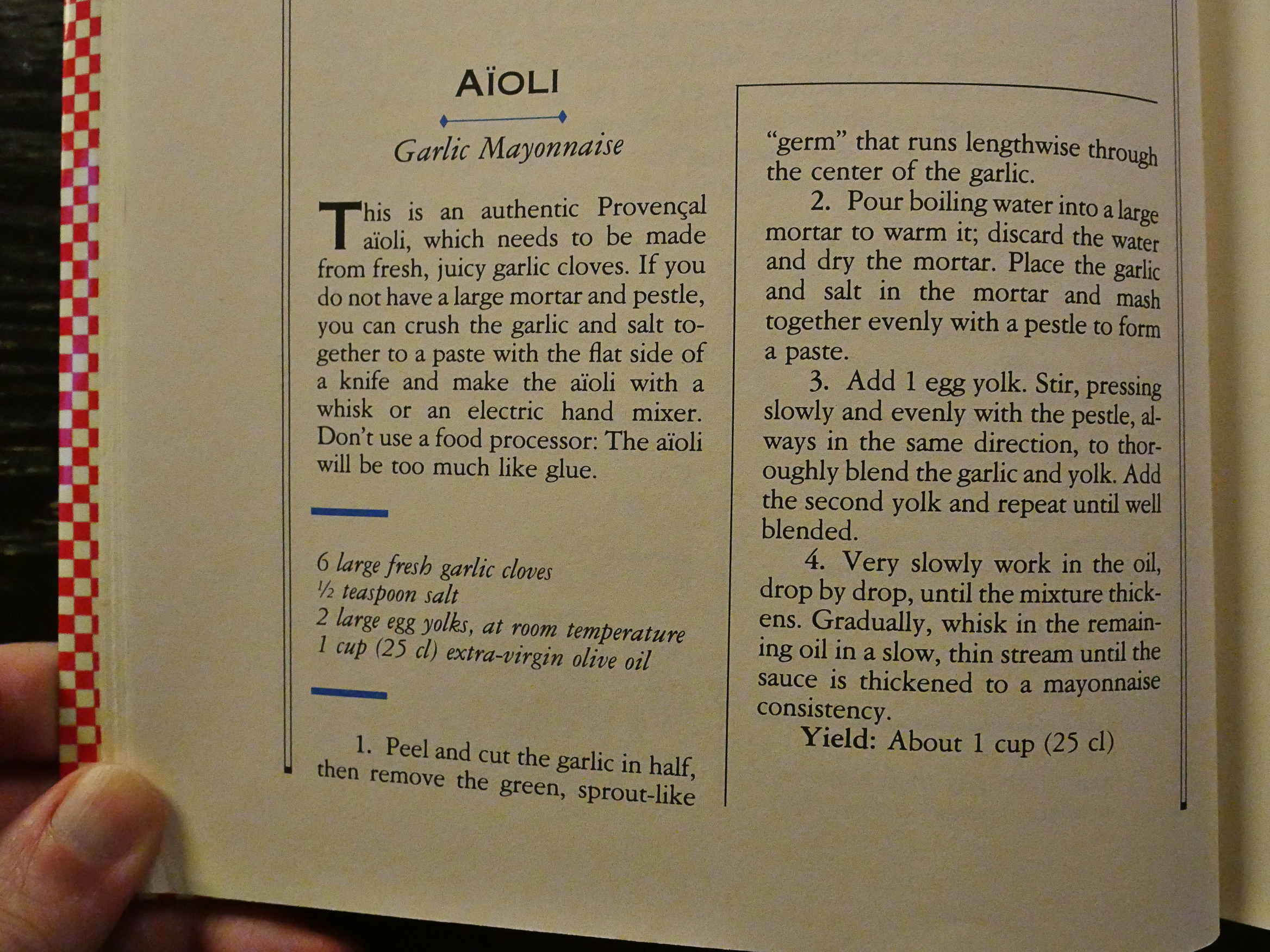 And it’s the first time I’ve ever made aioli from scratch, so I wonder how that’s doing to go. 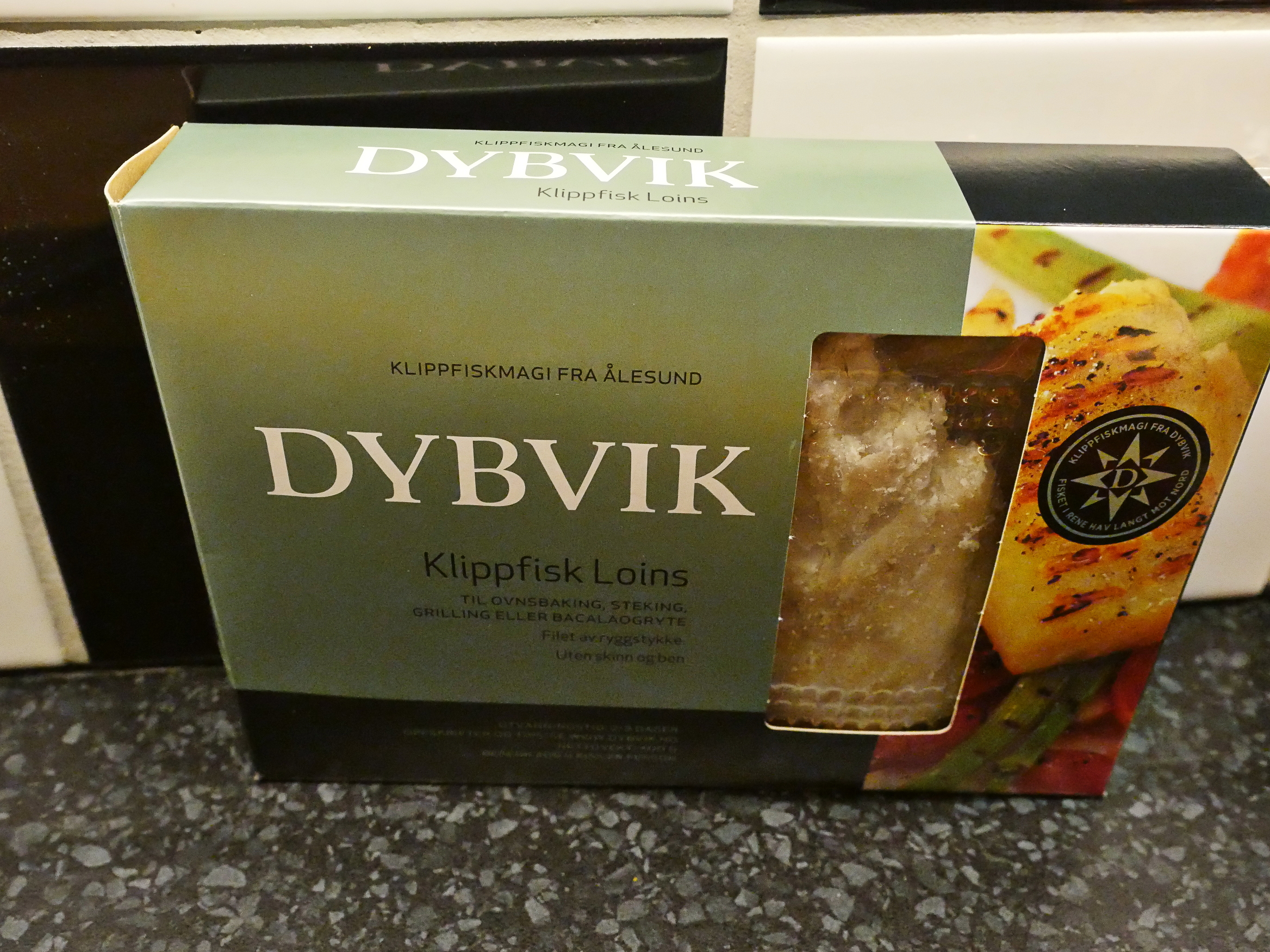 So it’s the normal setup: It’s salt cod, so it has to be desalinated for two days: 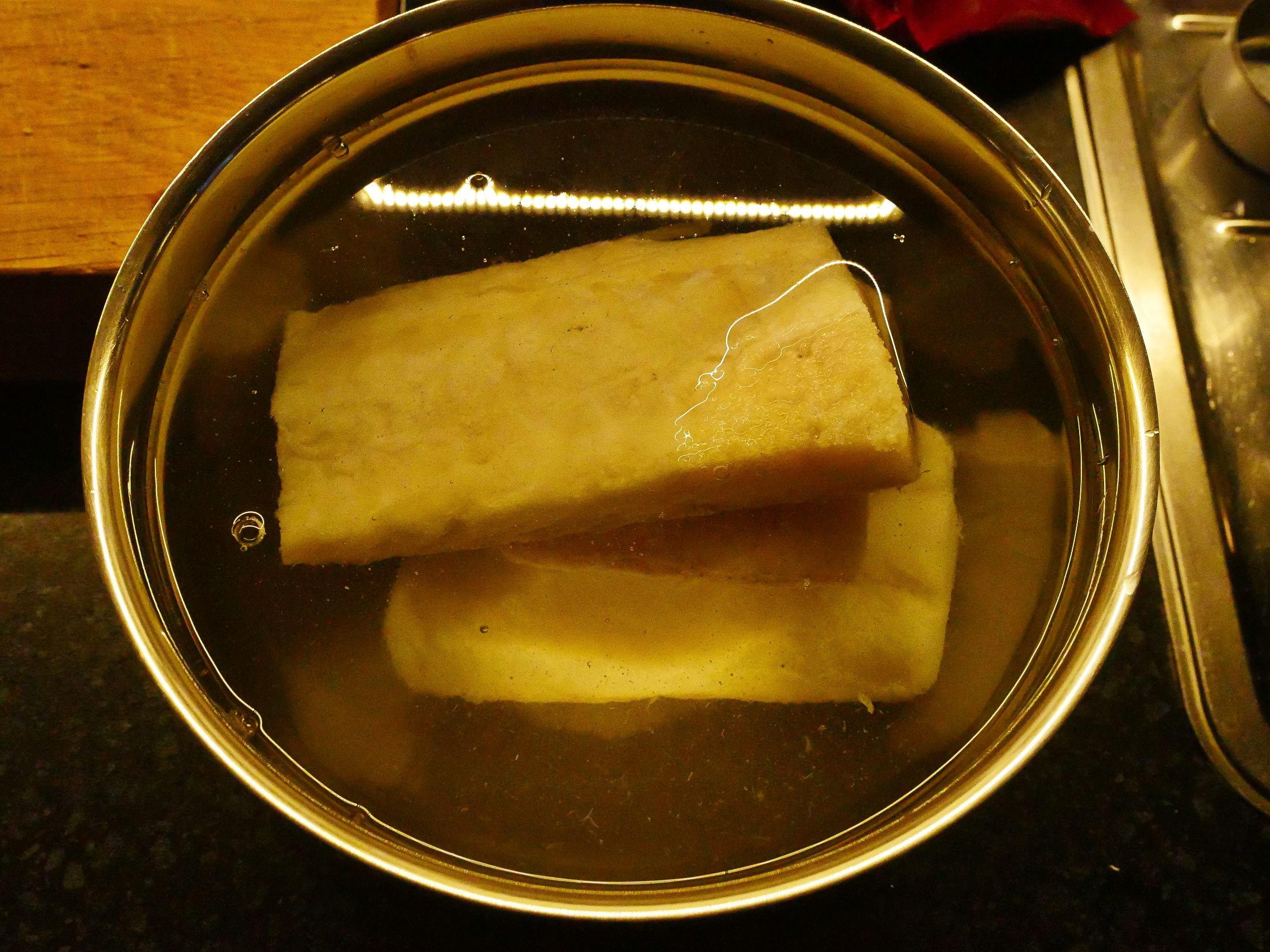 So, into the fridge… While that’s happening, I can read a book? Yes. 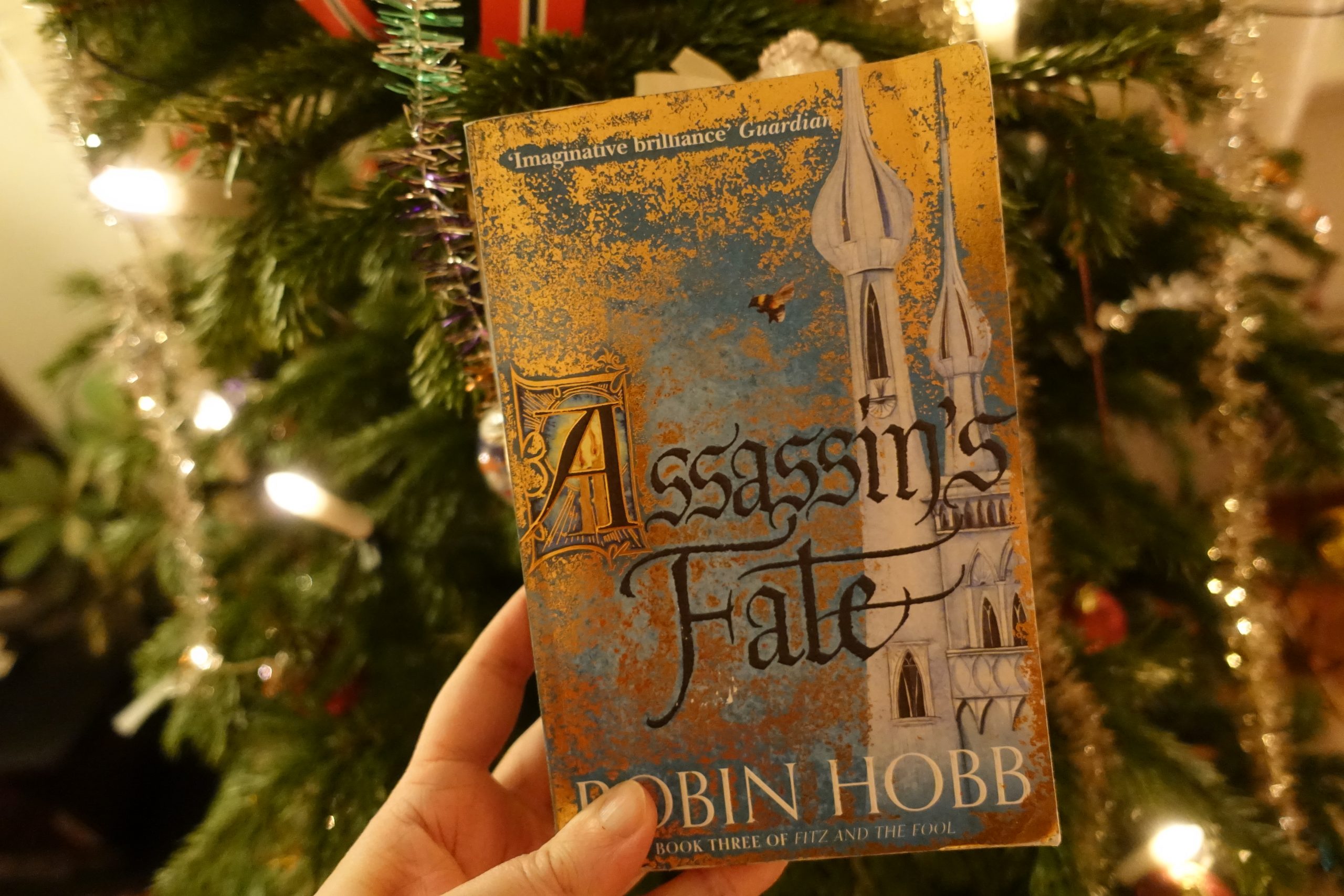 Now she’s just fucking with us.

See the pattern? Now this:

Hobb! Nobody can remember which books is which! Doing a combinatorial mix of words in titles is bad! 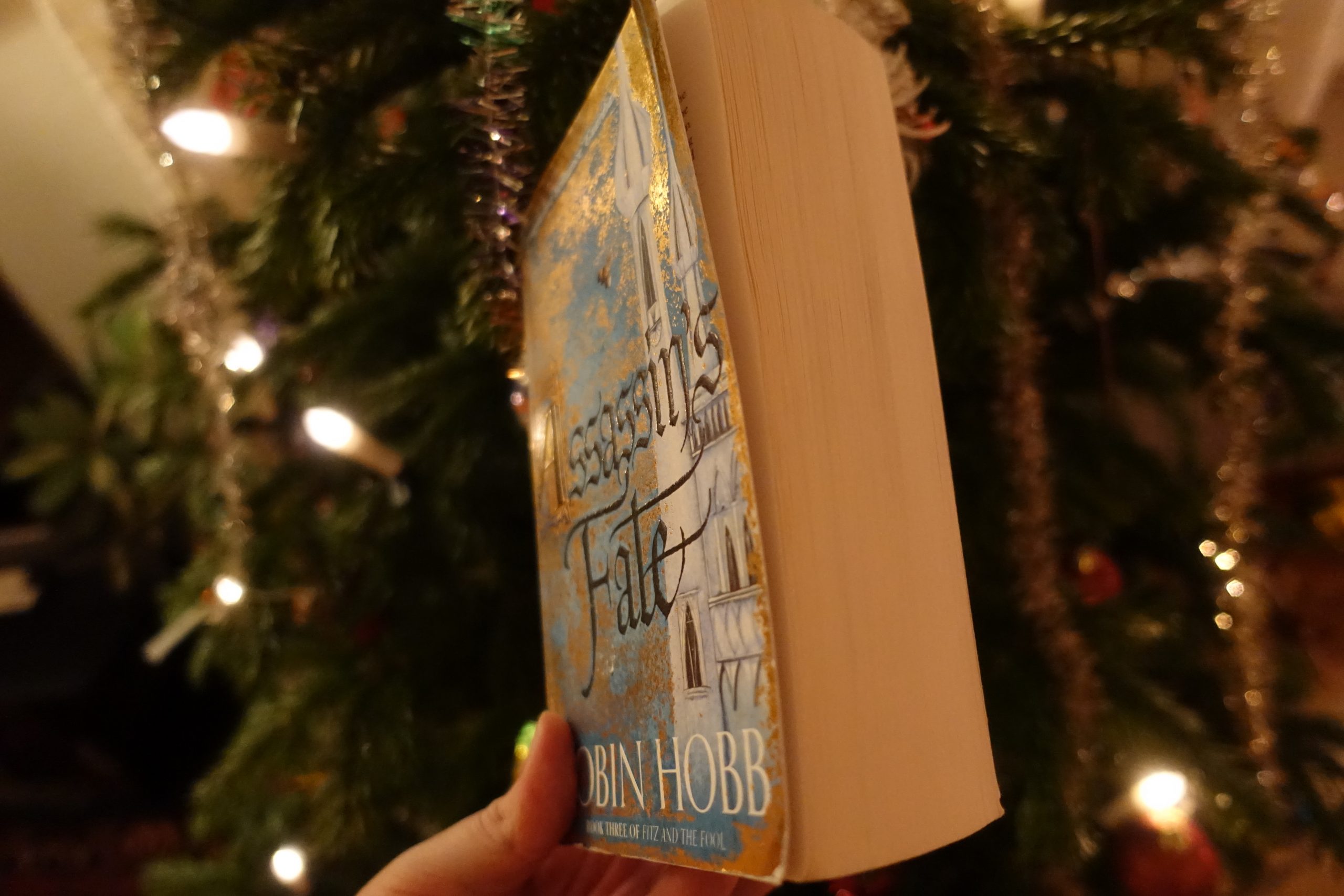 I mean, counting pages. Reading-wise, it’s a breeze. Robin Hobb has a way of writing that makes these books hard to put down: Sometimes the plots are so exciting that it all becomes too much and I just plotz. She’s also really great at world-building; her different societies do not feel like Feudal Japan With Identifying Numbers Filed Off or whatever. 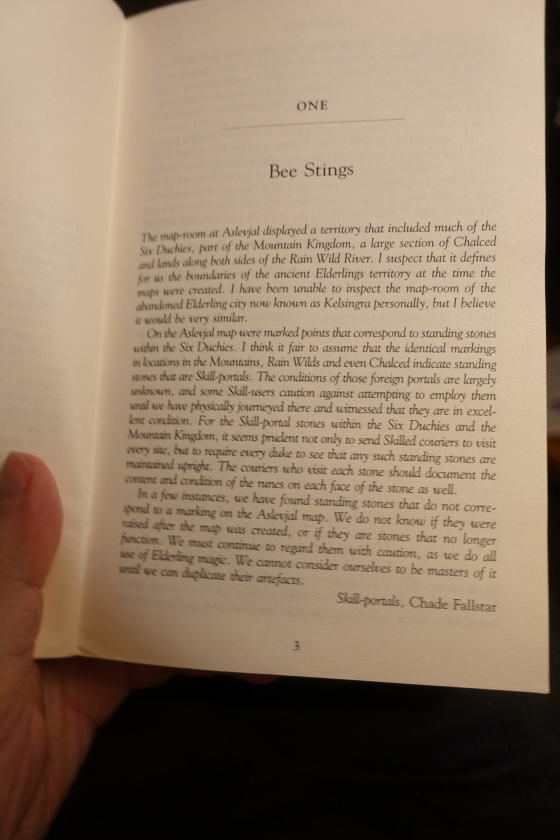 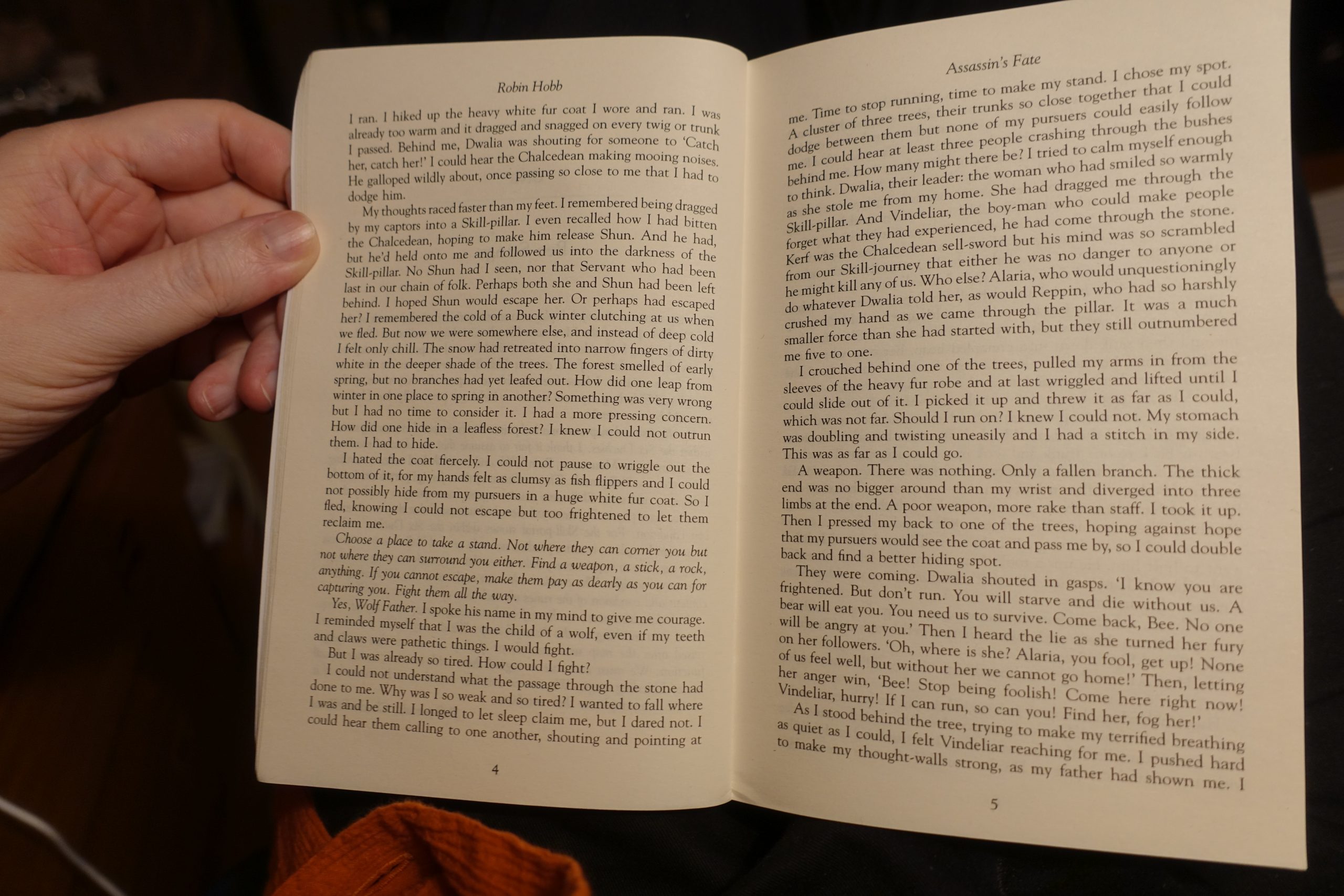 And this is the culmination of this series, apparently. I mean… OK, no spoilers? No spoilers. But it’s the end, so it has a lot to live up to, and it does. While some writers are rather thin on plot development and draw things out (I remember a mid-trilogy 400 page book by Cherryh that could be summed up “The ship took off.”, and was summed up that way in the next book.) But there’s a lot going on here, and everything that happens has repercussions, and there’s no deus ex machina that swoops in and makes all the tribulations of the characters irrelevant, and… It’s solid.

That said, Hobb has some annoying tics. OK, I hate all the torture scenes, but those can mostly be skipped over, but more annoying is that she has two plot gadgets she relies on way too much: Characters withholding information from each other (I seem to remember an earlier book that … just wouldn’t have happened if they’d talked on the first page; this one isn’t as bad), and the other is having Fitz (the titular Assassin) being stoopid.

Fitz always thinks he knows best, and goes off harebrained to sacrifice himself and then the other people go “hm, surely it’s not as dire as that” and then they have to go after him, unlocking doors he’s locked, and kinda sorta save him. Again, there’s not as much of that in this book as in previous books, but it’s a really sad way of solving plotting problems.

Oh, and another really annoying thing, come to think of it: In these books, nobody believes anything anybody says. “Could you pass me the salt?” “Do you really want salt?” These characters can mind-read and dream prophetic dreams and everything, but whenever somebody says something like “Fitz is alive; he just mindcalled me” everybody says “You’re just feverish. Go to bed.” It’s really, really annoying, and it wastes so many pages. One thing I really love about Star Trek: The Next Generation is that they had unconditional faith in nobody trying to bullshit anybody else, and that just makes things move faster. Somebody: “Captain, I think… something’s vaguely kinda perhaps wrong?” Picard: “Everybody assemble, drop out of warp, run a full diagnostic; could we be in an alternate timeline? Did somebody take over our bodies? Find out what’s wrong!”

And the next-to-final scene, with page upon page being spent on Fitz and how sad everything is, boo hoo (well it is sad), and then half a page spent on the Fool, as an afterthought. It’s eyeroll inducing.

But it does work… 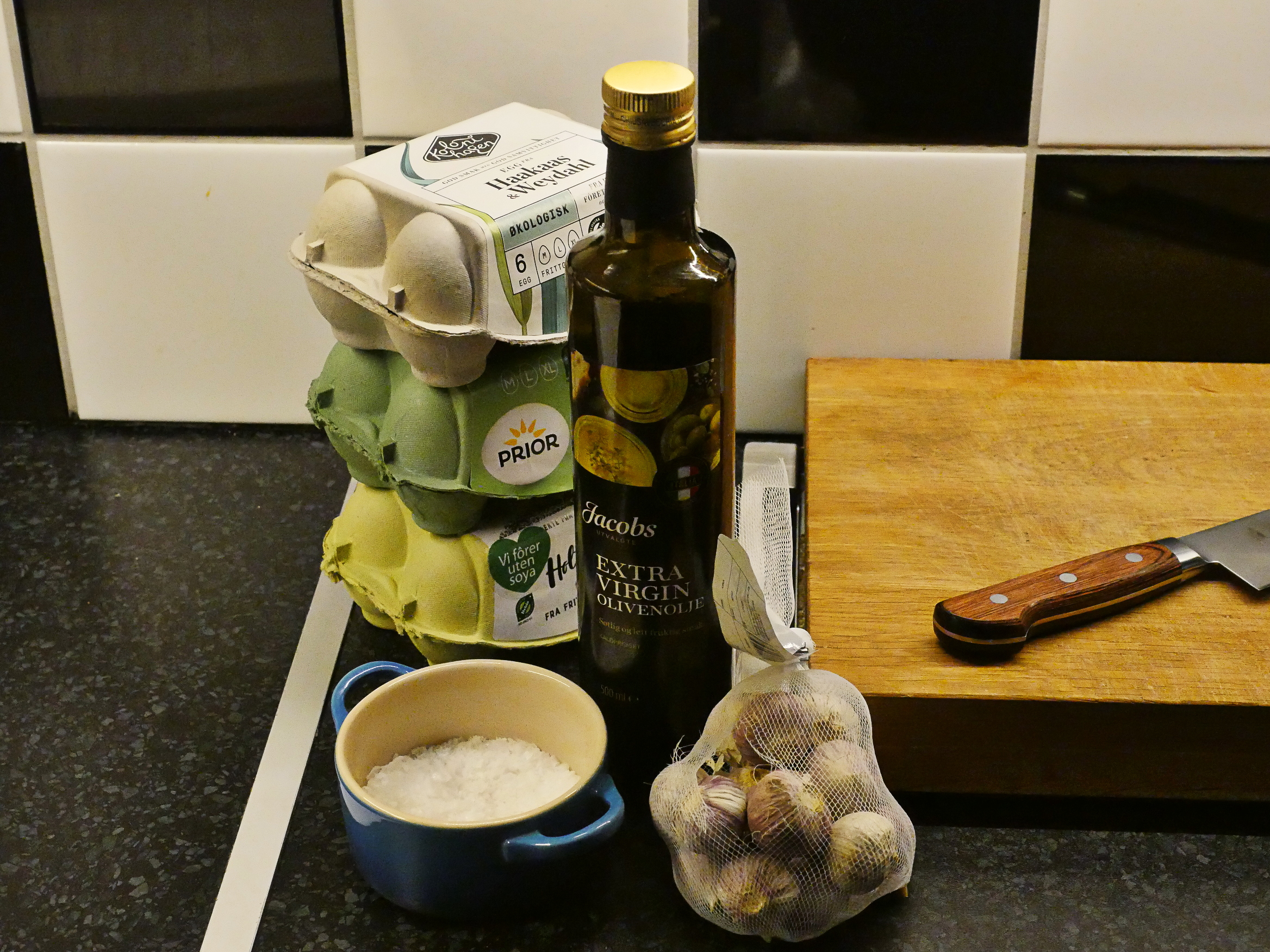 The cod’s been de-salted enough now, so it’s time to start on the aioli. 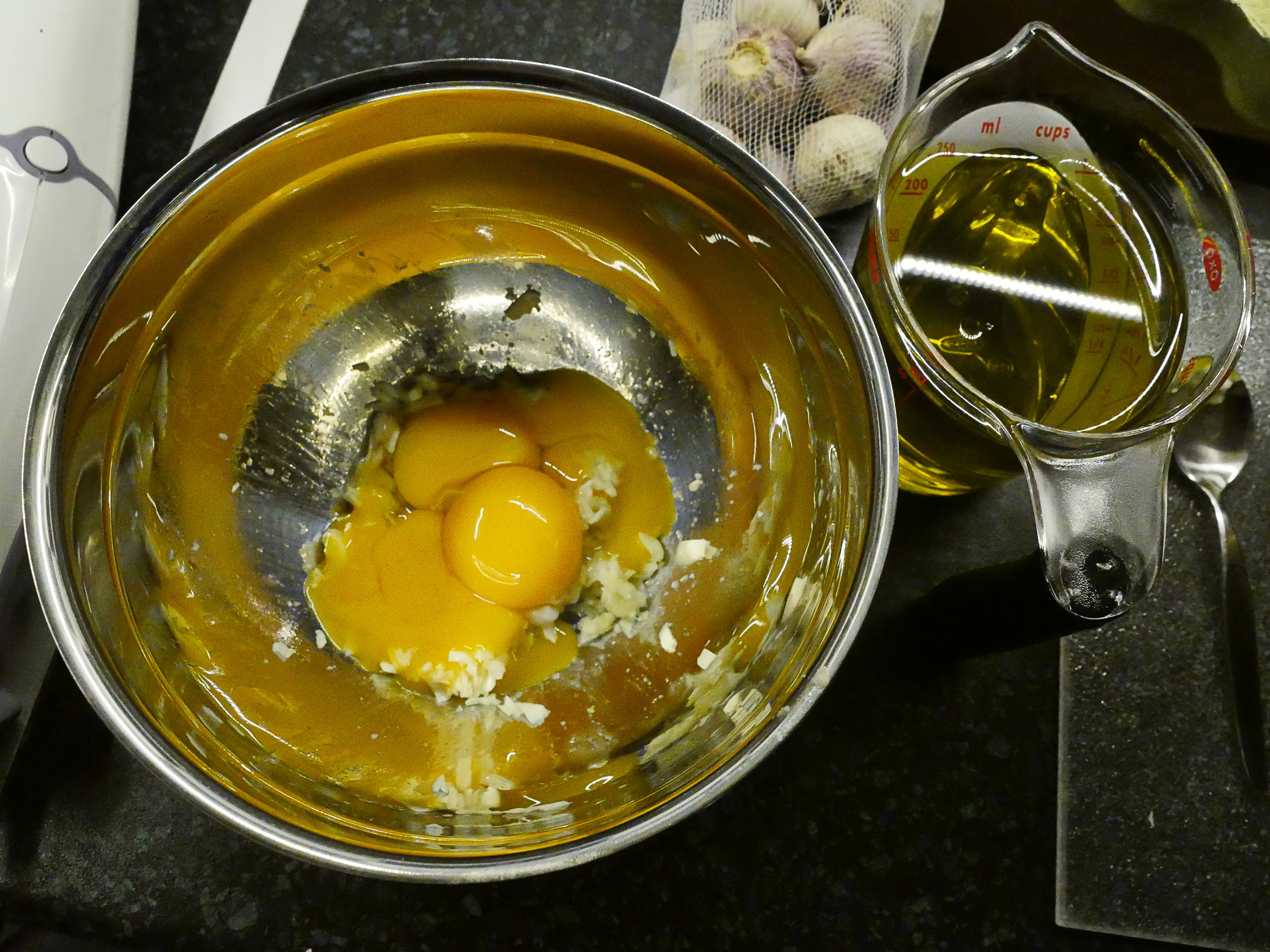 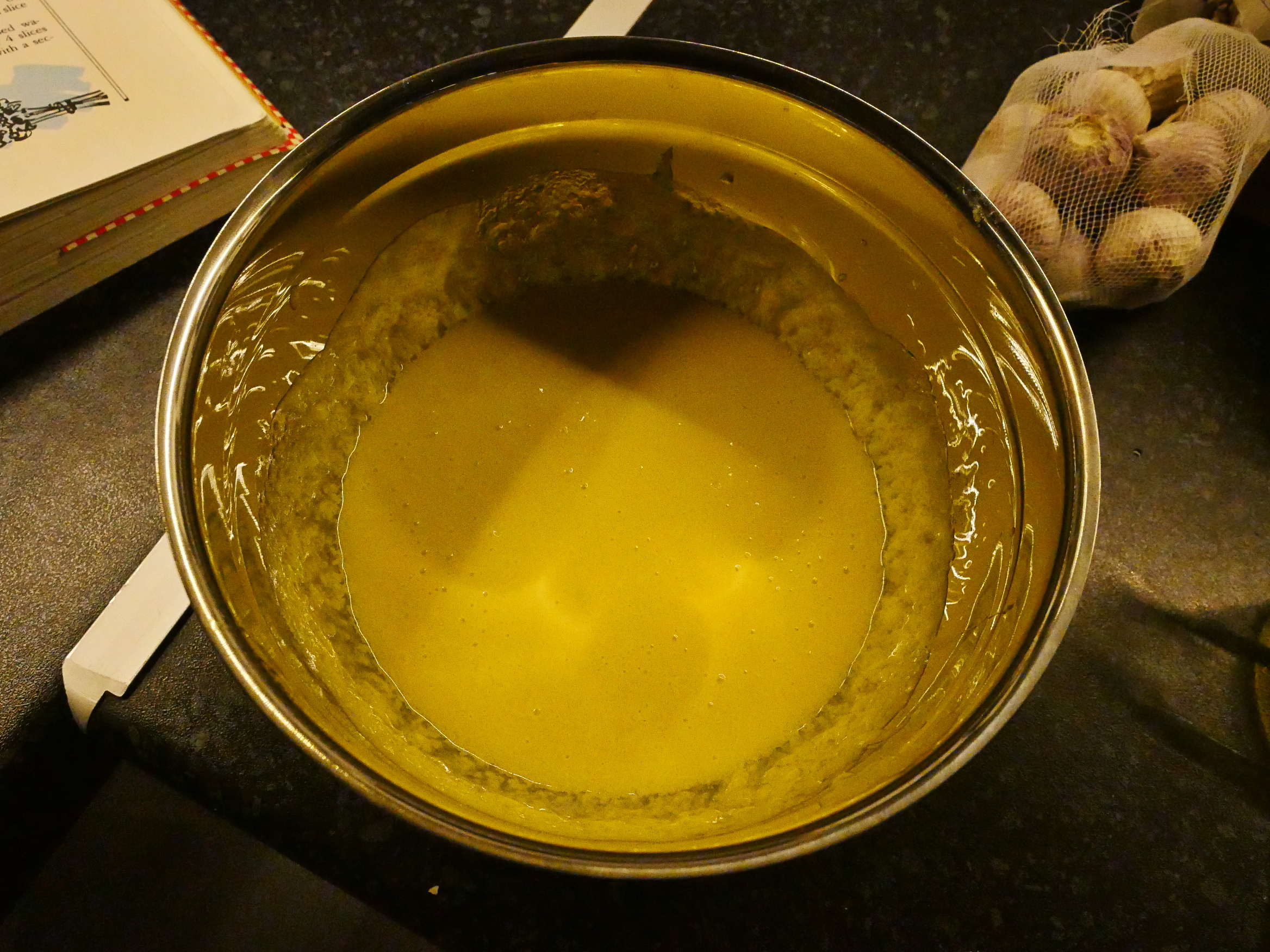 Whisked a lot and then add oil and EEEEK! It separated! It’s horrible and gruesome! 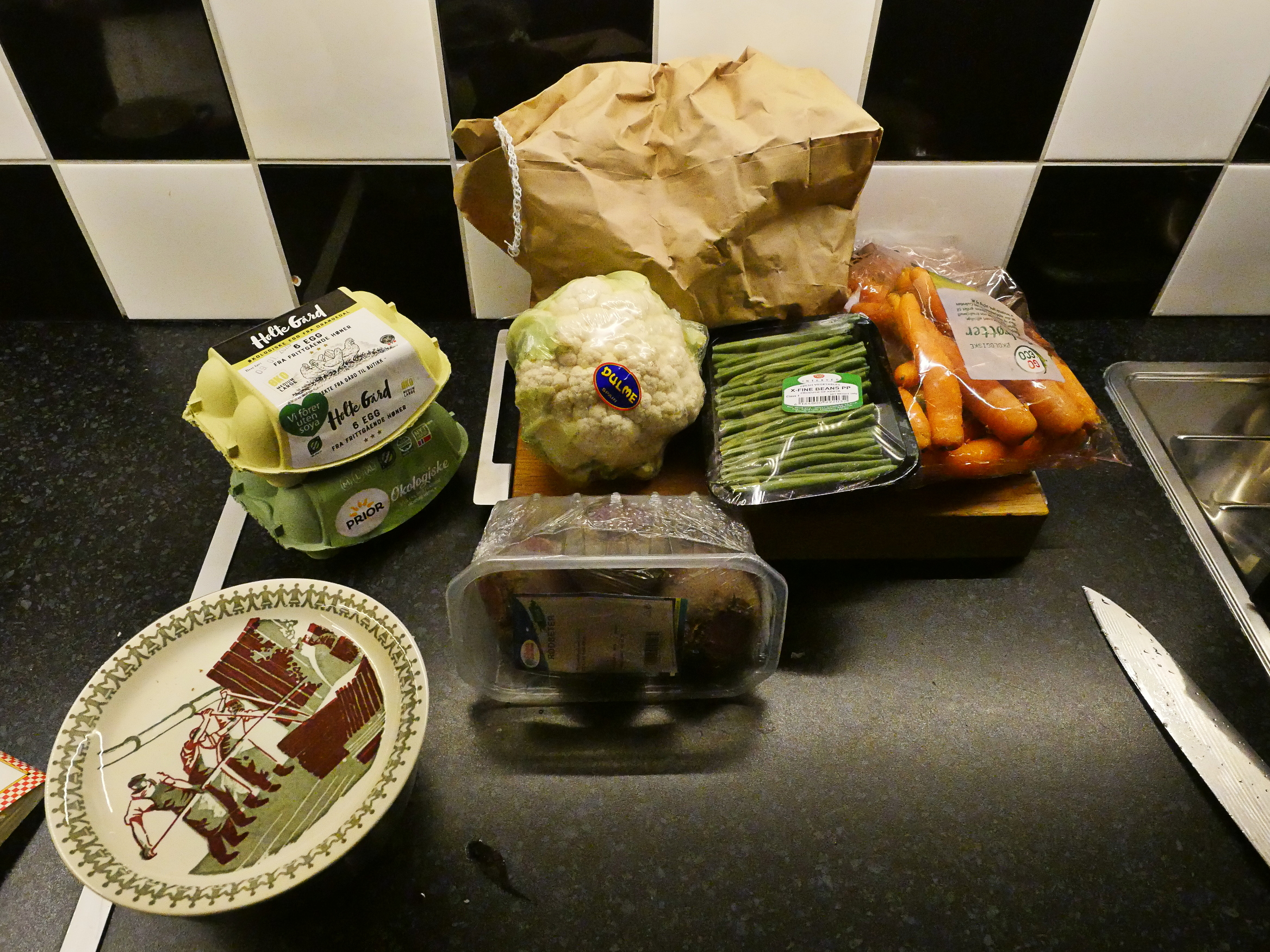 Well, while I think about what to do, I’ll do the rest of the dish.

It’s a lot of chopping. 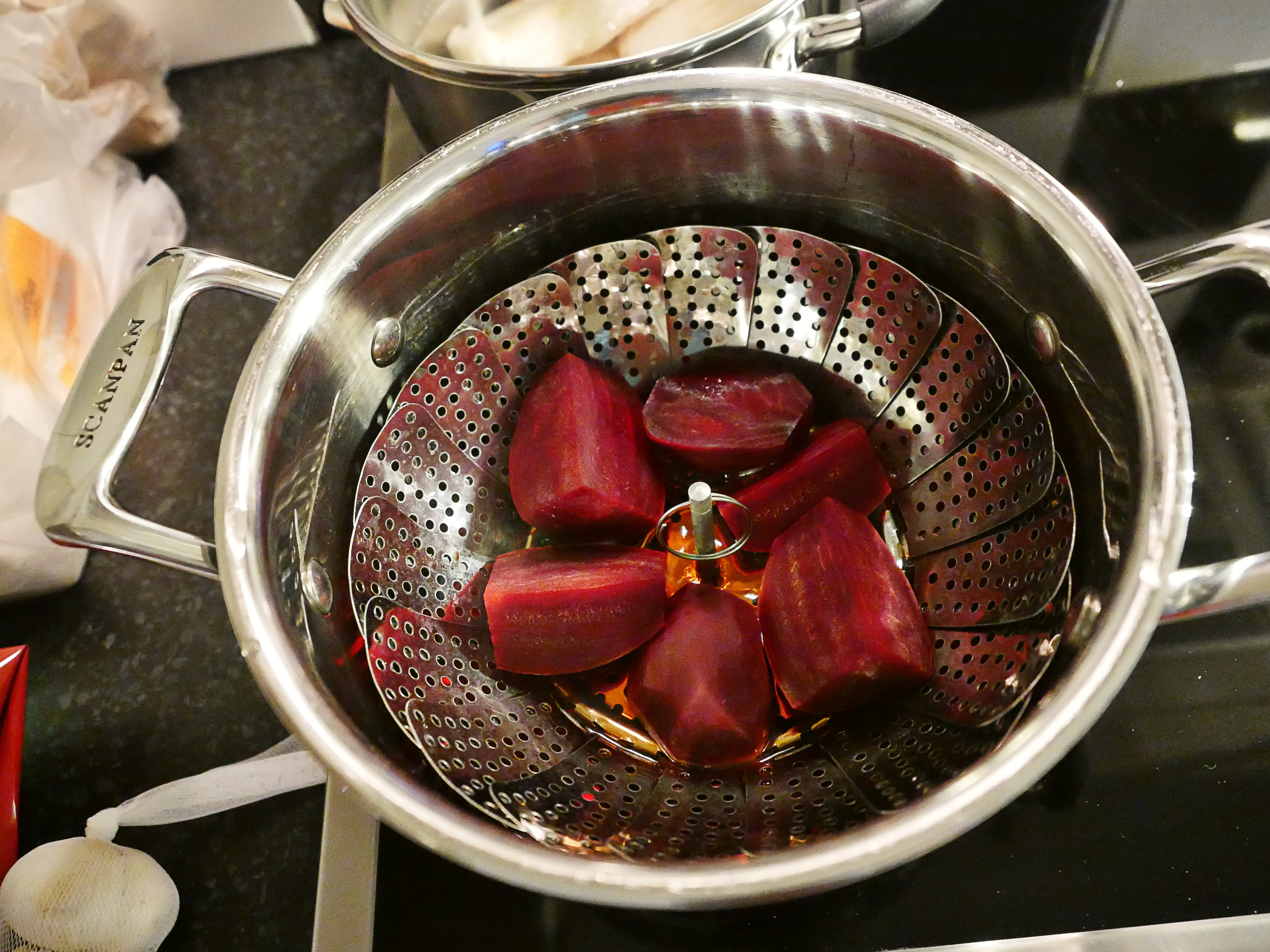 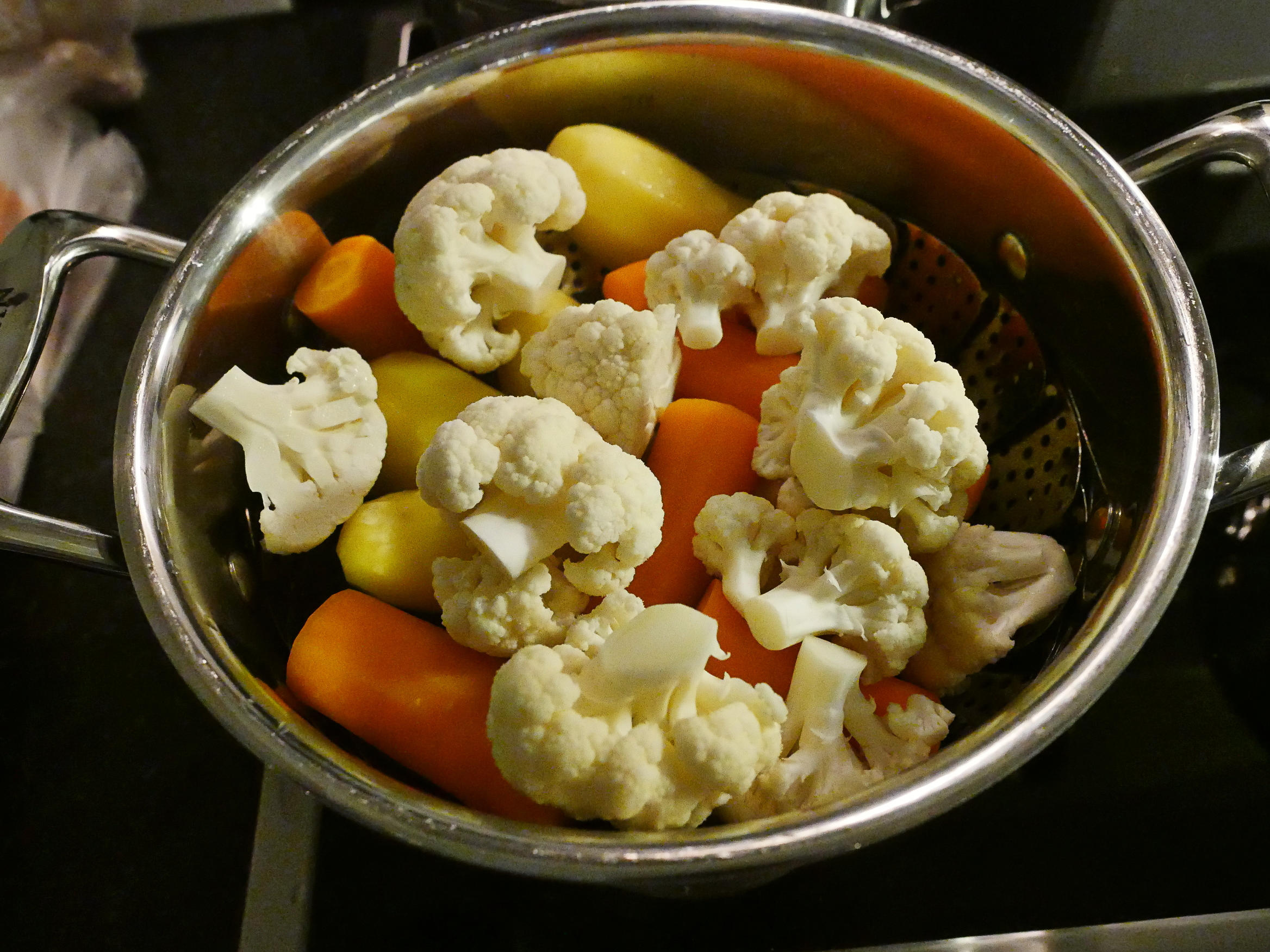 Finally almost everything in… 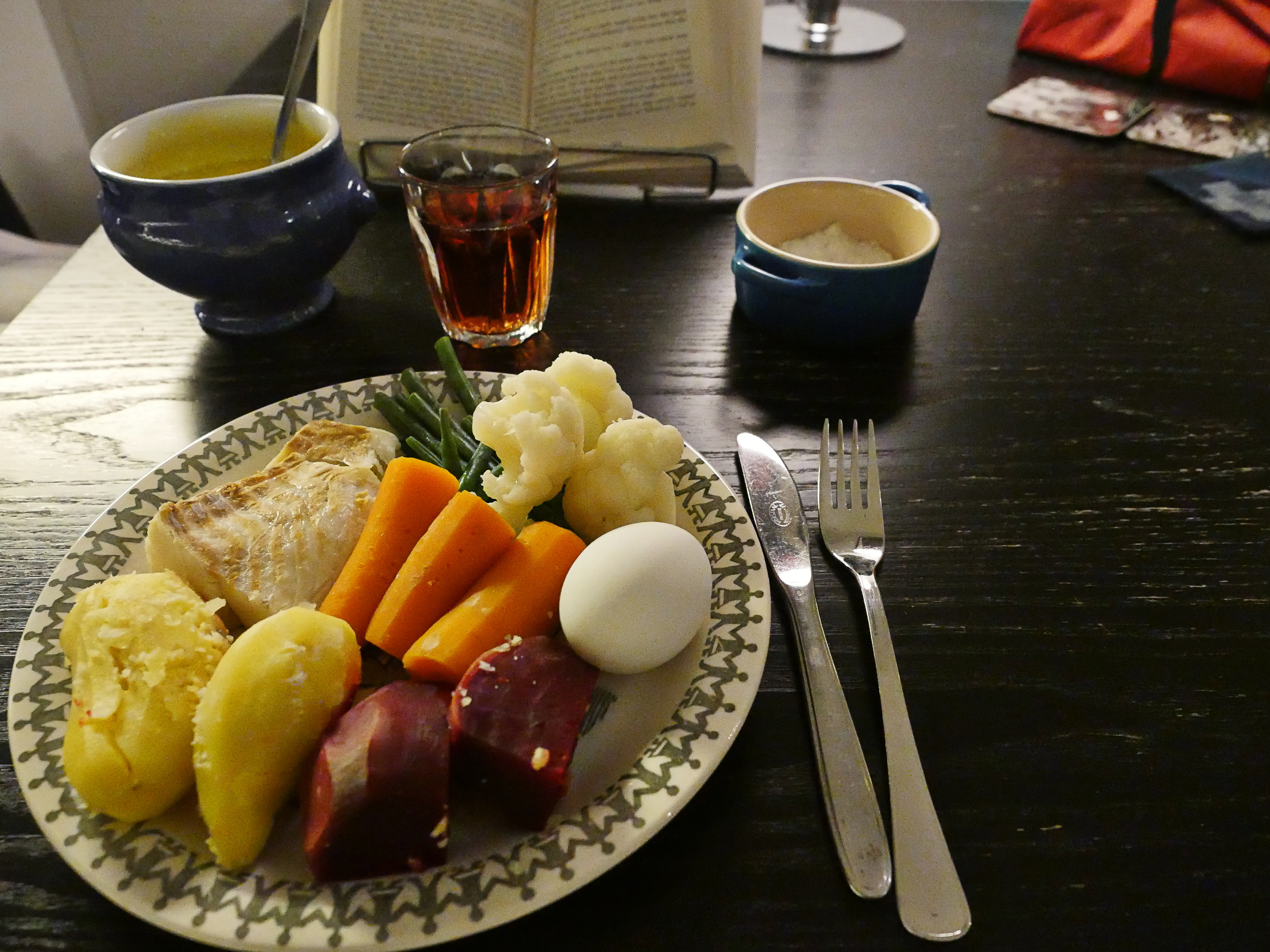 And done! The recipe specifies one hard-boiled egg (in its shell), too, so I did that separately. I guess the shell is to make it more rustic? It’s got that rustic vibe.

I redid the aioli while the veggies were cooking, and added the oil at a much slower pace, and then everything went swimmingly. It turned out a bit thick, though. Perhaps I should have added some water?

Anyway, this was really good. I love salt cod, and it goes great with the aioli. What a good idea. And the beets are also a great component here. I should have added 2x the cauliflower, though.

Some of the recipes in the Bistro Cooking book have been kinda dodgy (or I’m not able to execute them), but this was perfect.