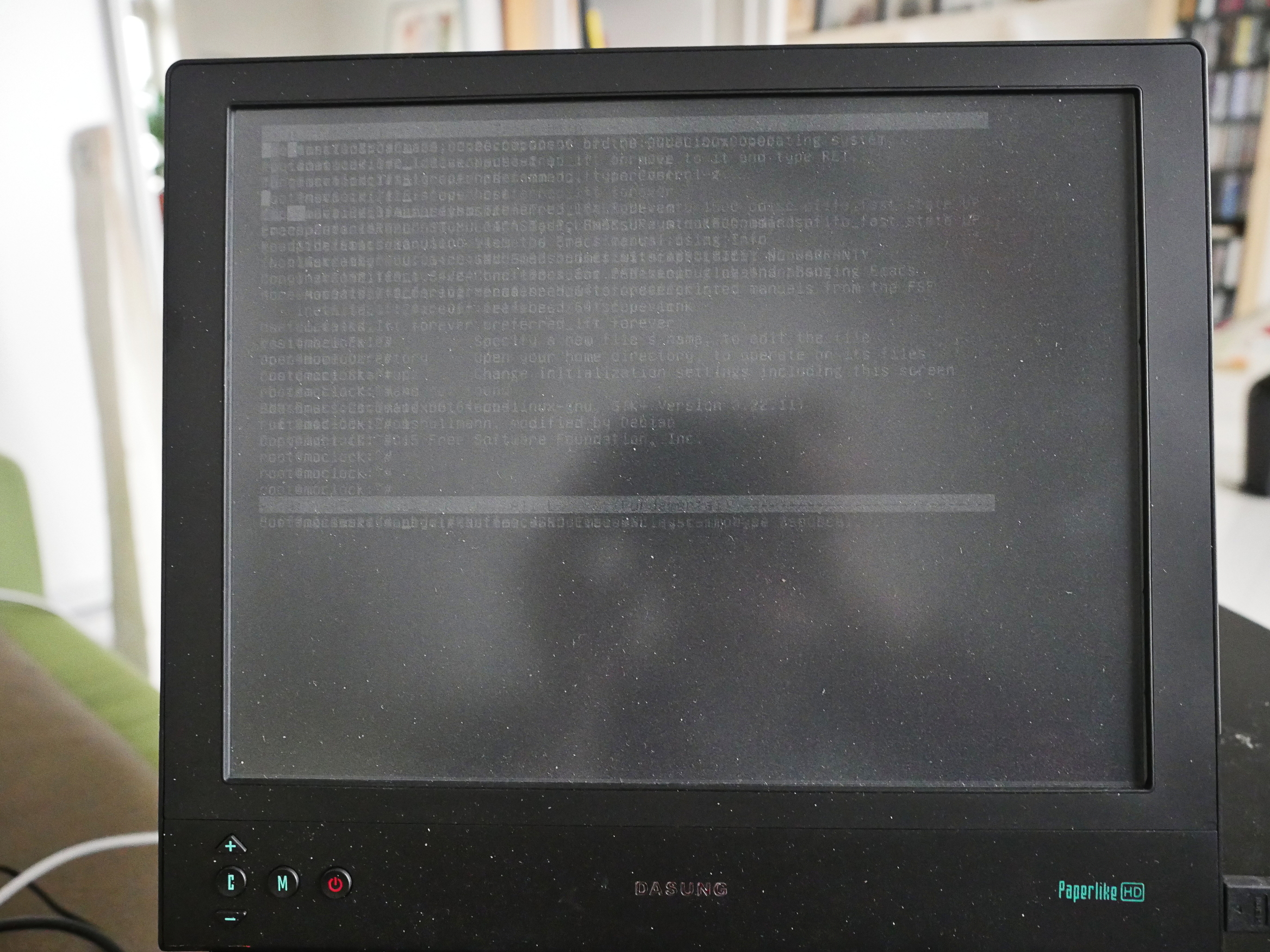 Since the first time I heard of e-ink products, I was pretty enthused: Imagine having something with the resolution of paper and the convenience of a very light tablet to read from! What a marvel!

And then I saw an e-ink e-reader.

They’re horrible! The resolution is way less than paper, and when you flip the page everything blinks and inverts and dances around!

Seemed like a bad joke to me, but I assumed that surely they’d get their shit together and then one day e-ink e-reader products would take over.

Then years later, not much has happened, except that e-books have fallen in market share as people are moving back to paper books. Because those e-readers are horrible.

So, of course, when I read that somebody had made an HDMI e-ink monitor, I had to have one. 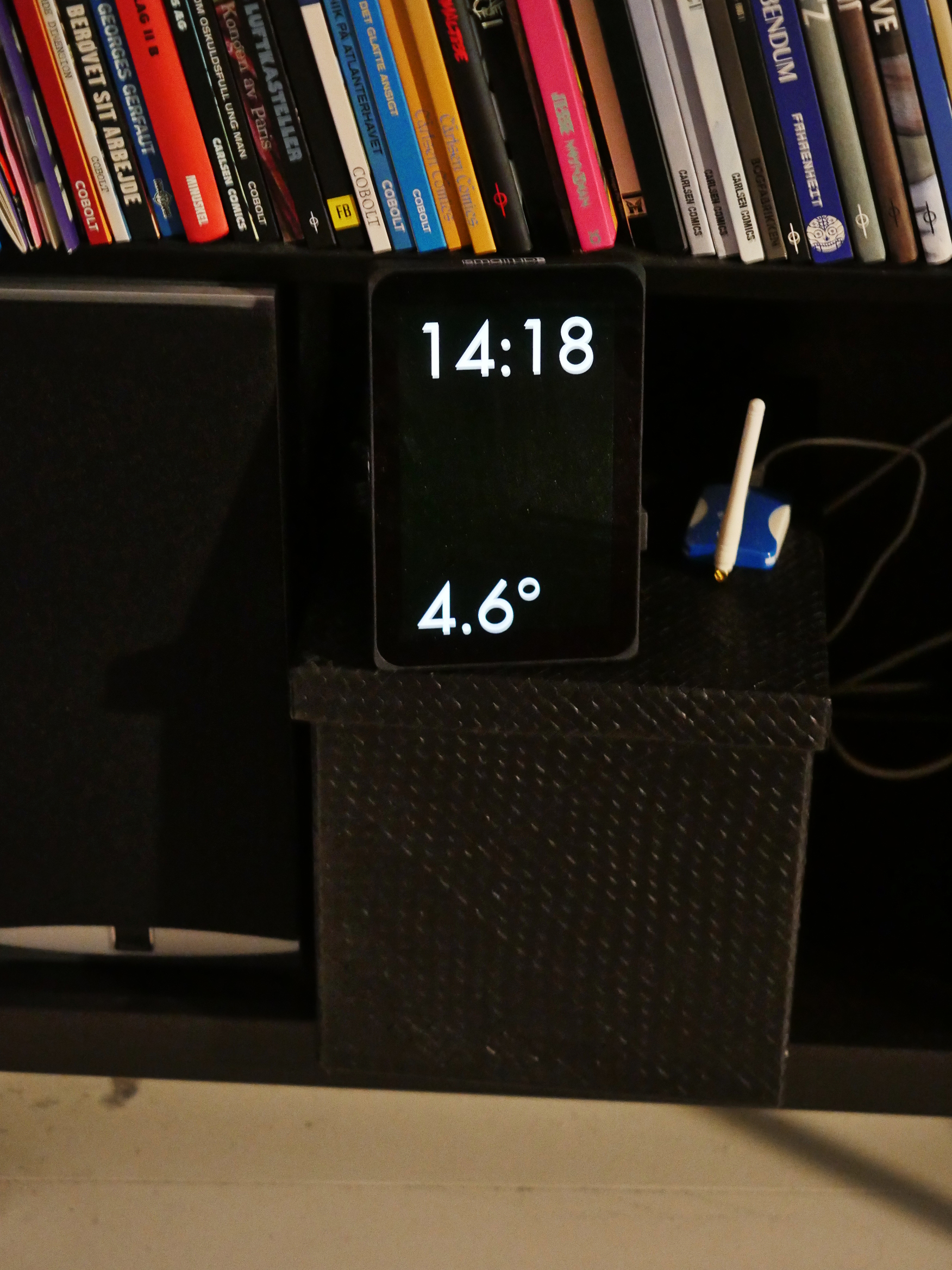 Because I’ve got an Emacs-based alarm clock in the bedroom, and the light from the screen is annoying. Even the OLED screen I bought isn’t black in the black parts. And its response curve goes from, like, #202020 (as black) and then jumps to #808080 as the next-darkest colour it can display.

The e-ink display emits no light, so perhaps it can be used here? 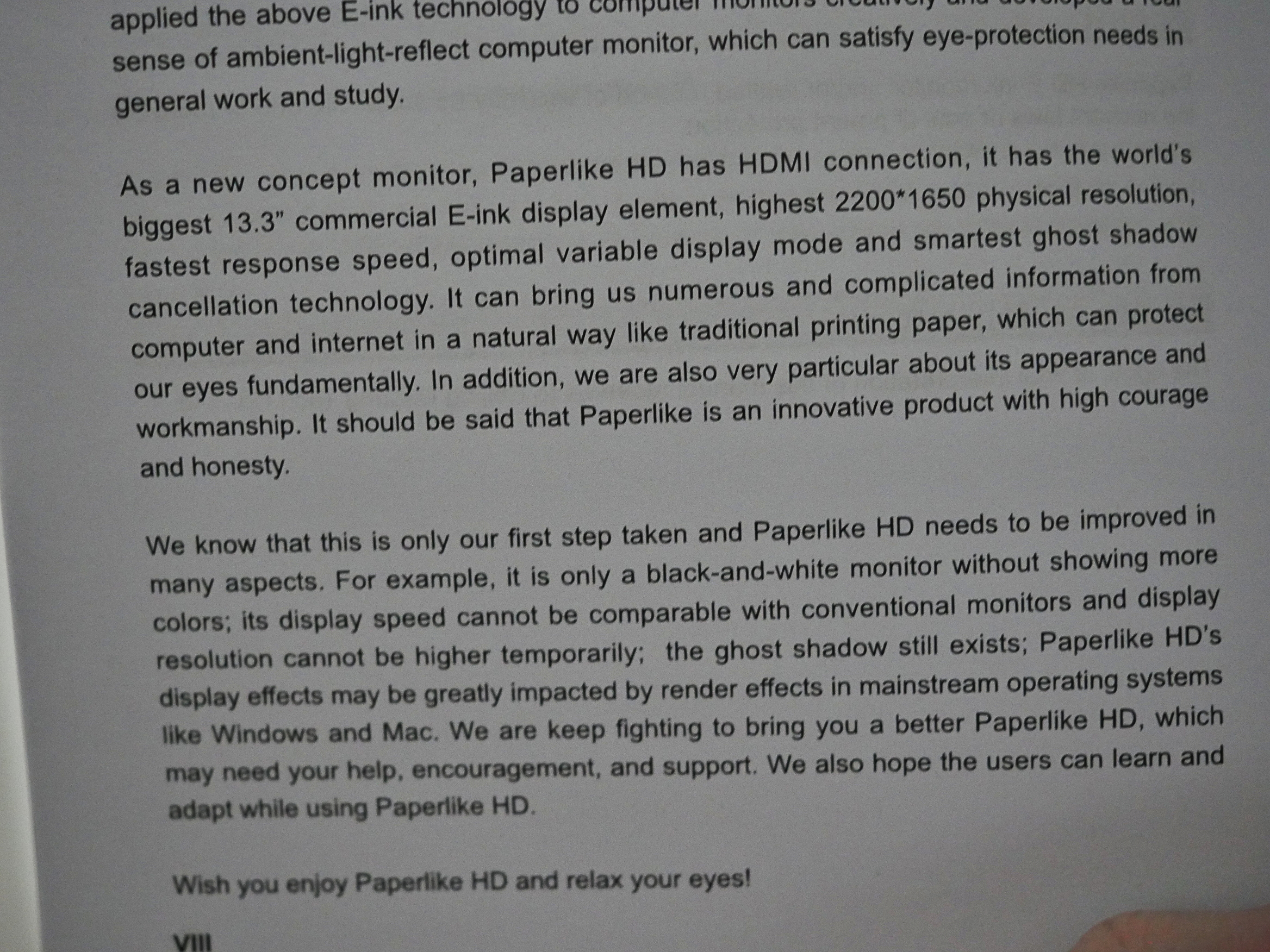 The manual from Dasung is pretty funny. “It should be said that Paperlike is an innovative product with high courage and honesty.” 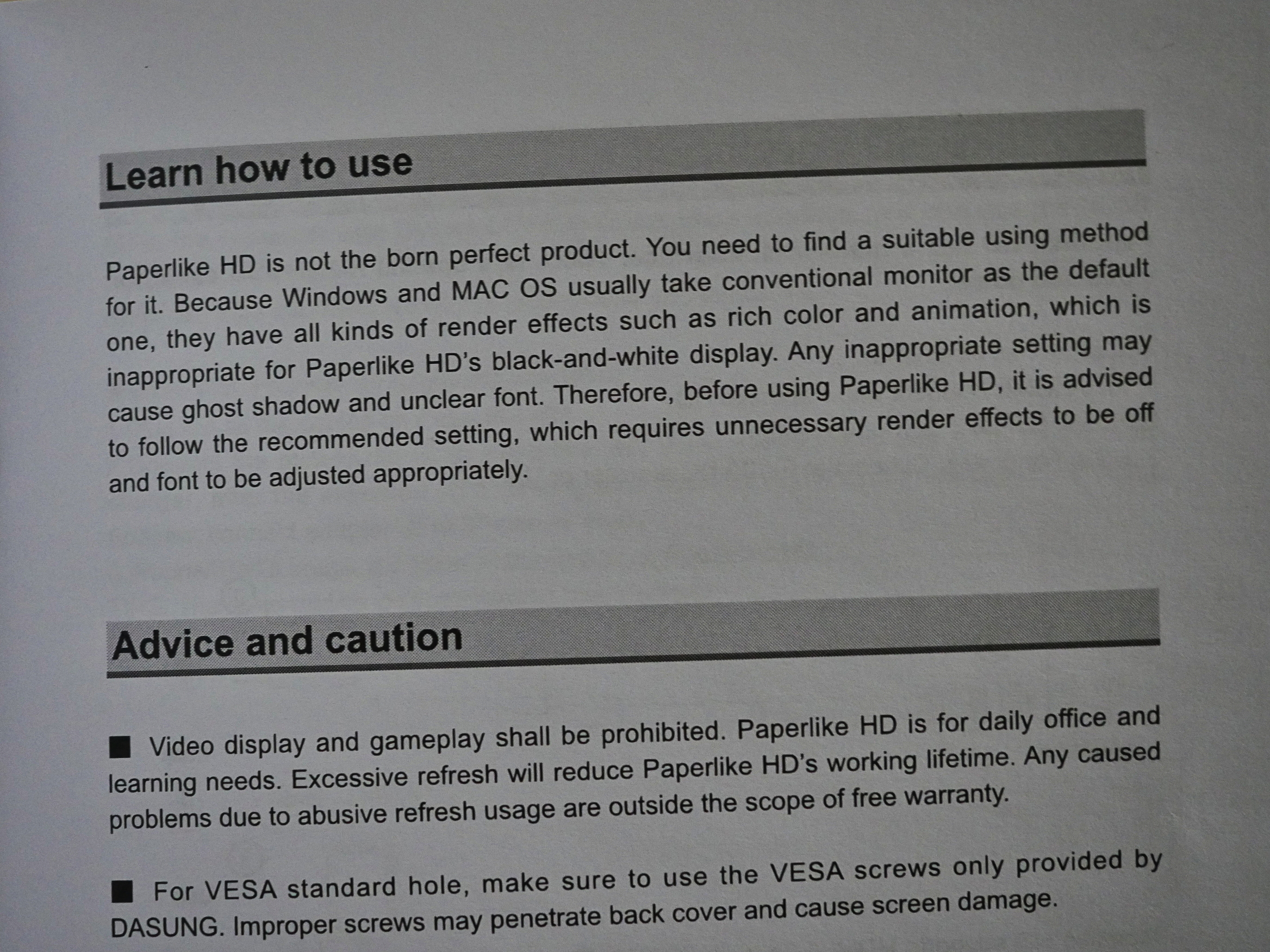 “Video display and gameplay shall be prohibited.”

I mean, I know what they’re trying to say: That this isn’t a perfect product, and that there are severe restrictions to what you should expect this thing to do. Because of ghosting and the other problems this tech has.

It’s a thoughtful product. For instance, you need just one cable: It’s a mini-HDMI connector at the screen side, and at the computer side it’s a full HDMI and a USB connector for power. Perfect. 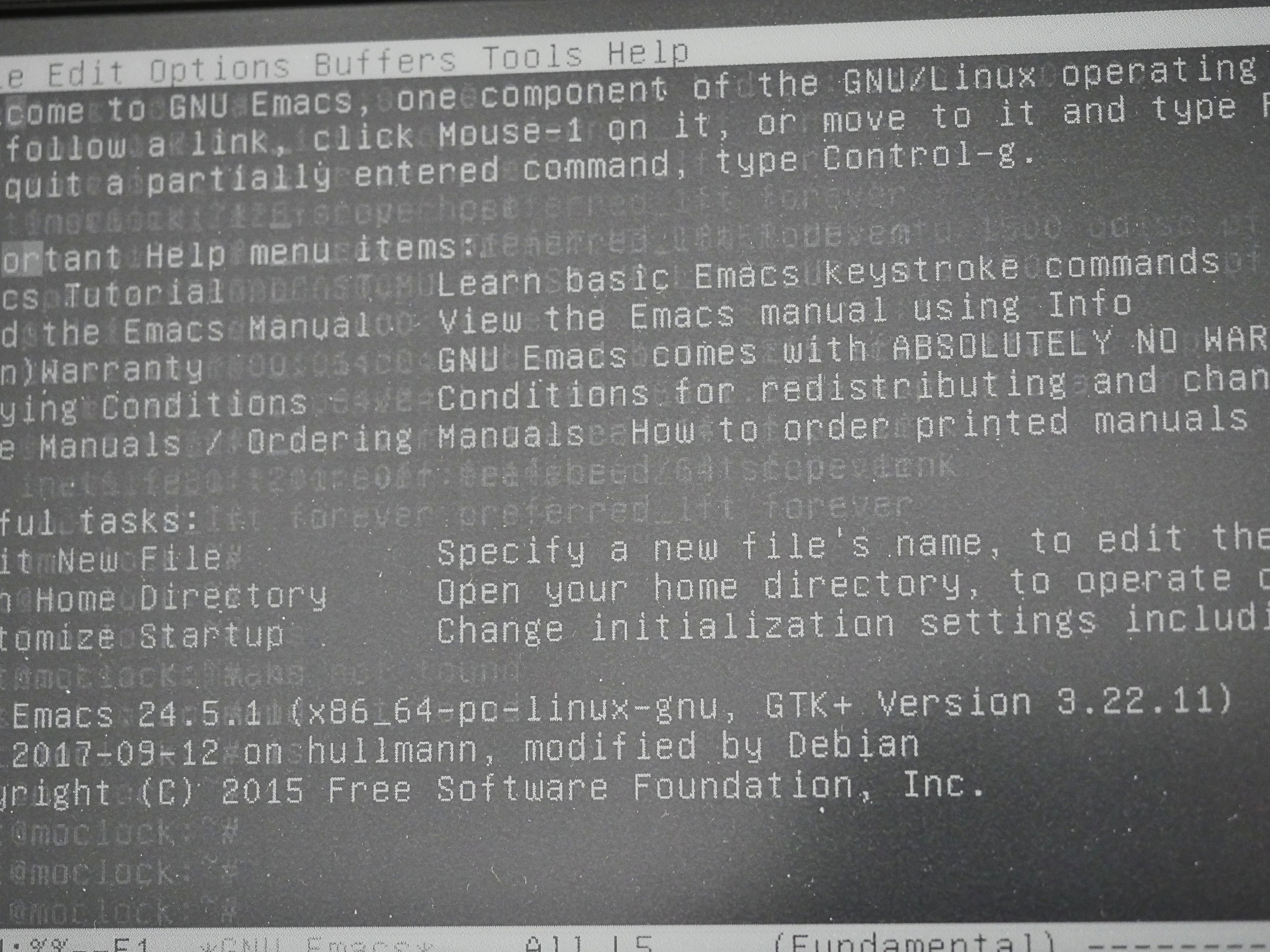 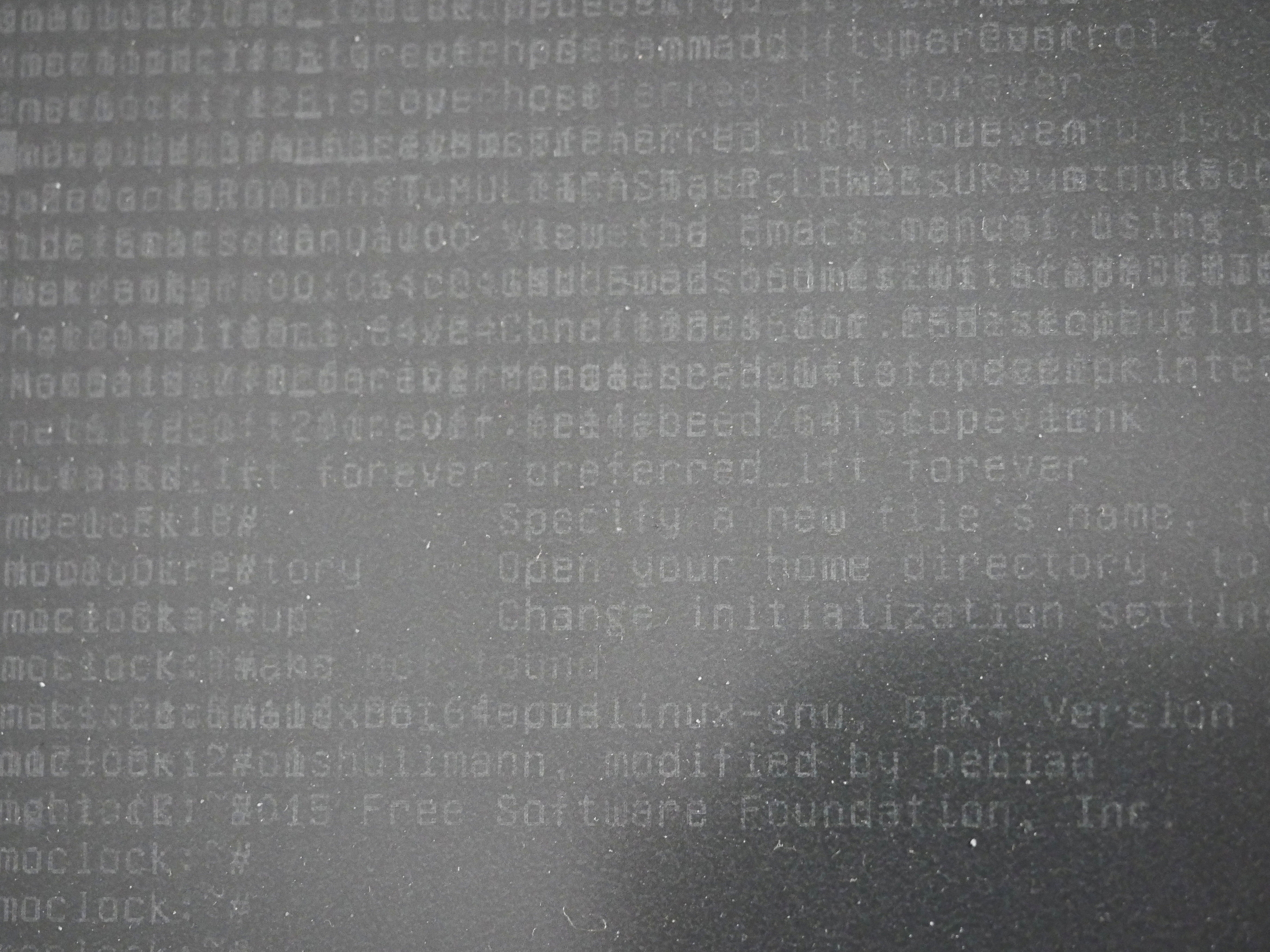 And this is what it looks like when it’s displaying nothing. Not a screen to display secret things on for sure. 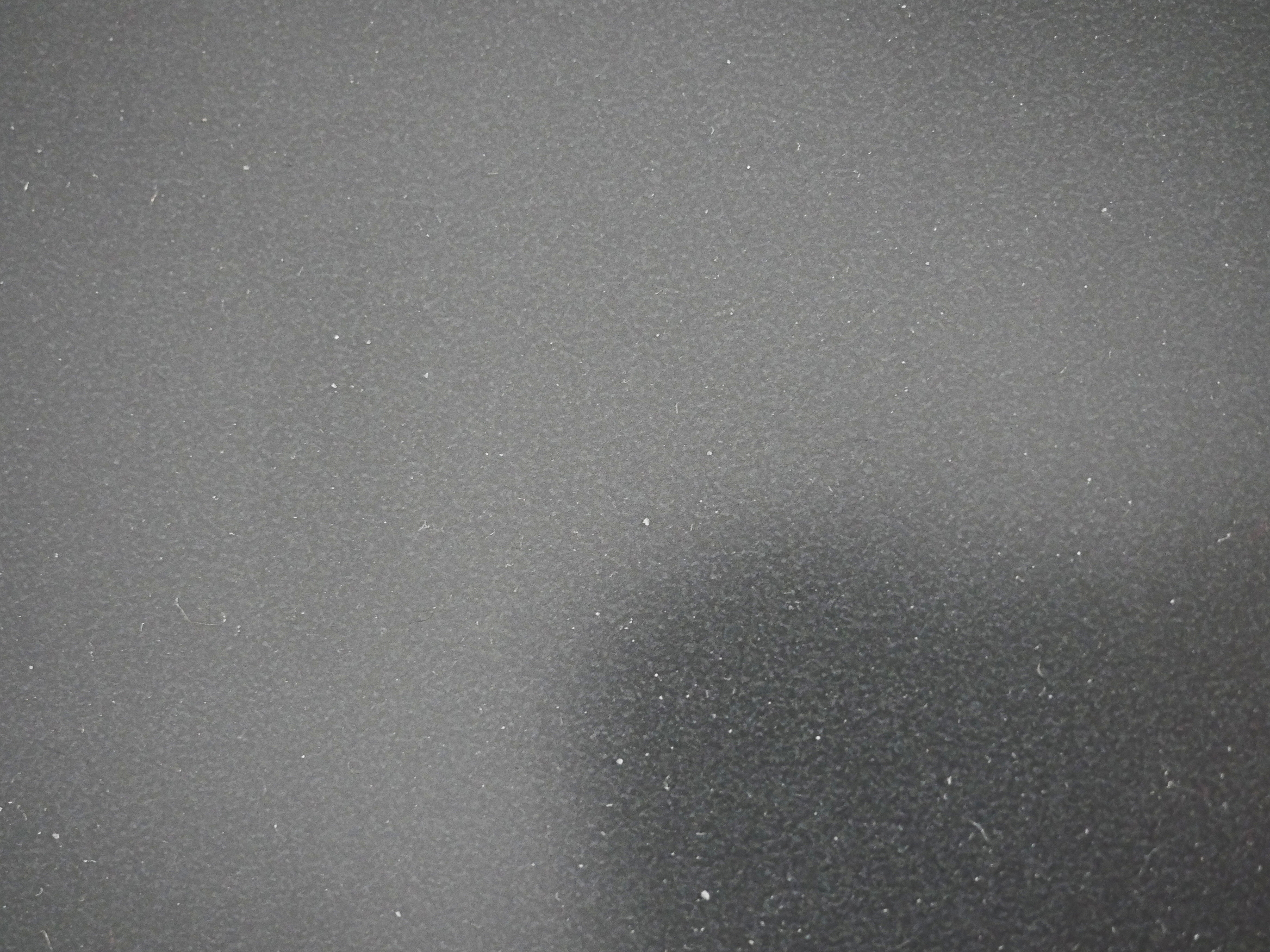 But there’s a “C” button on the screen that flashes to white, and then back to black, and then all the ghosting is gone: 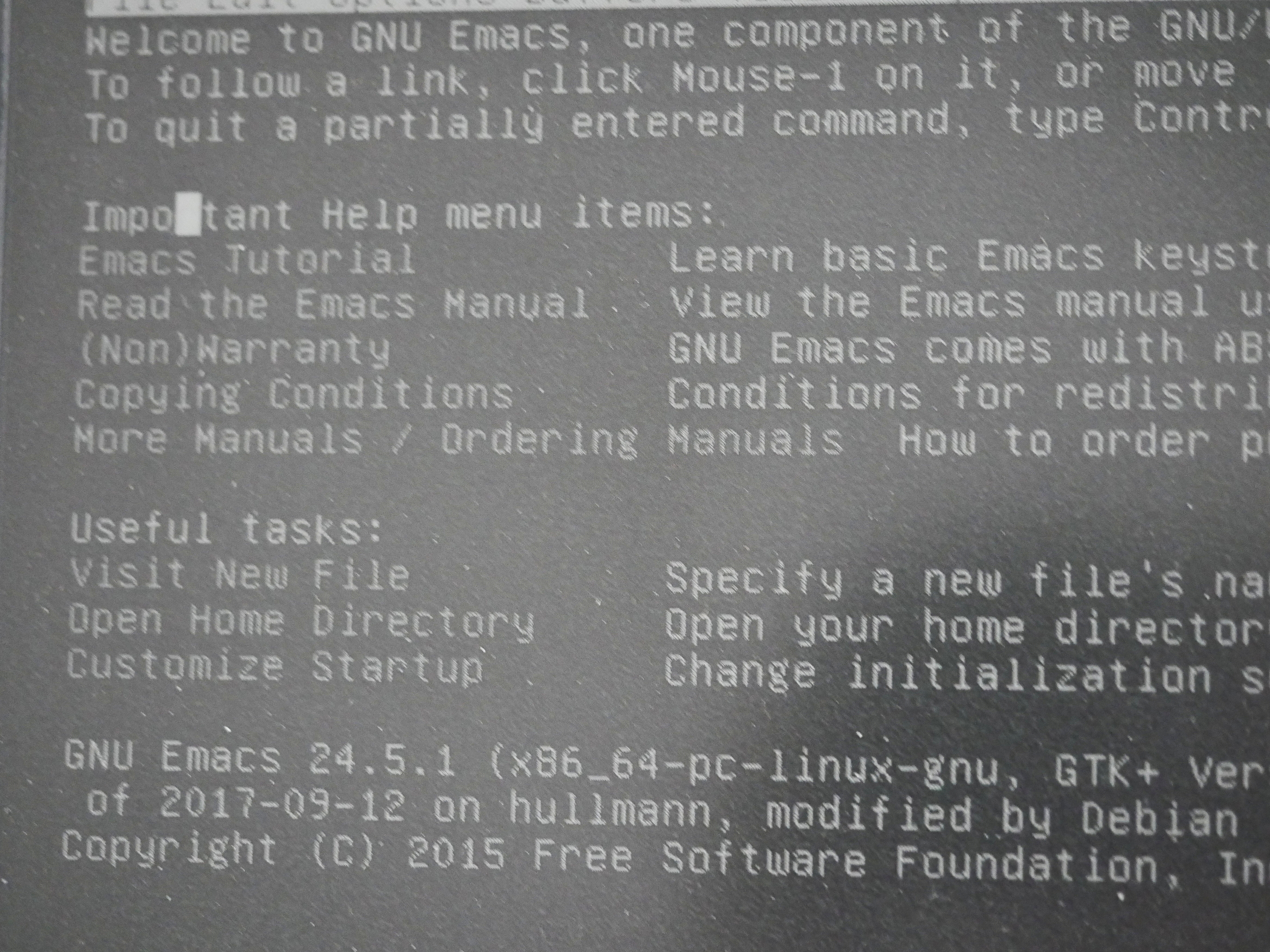 Nice. And it’s supposed to be possible to control this from software, too, so perhaps this is usable as an alarm clock… 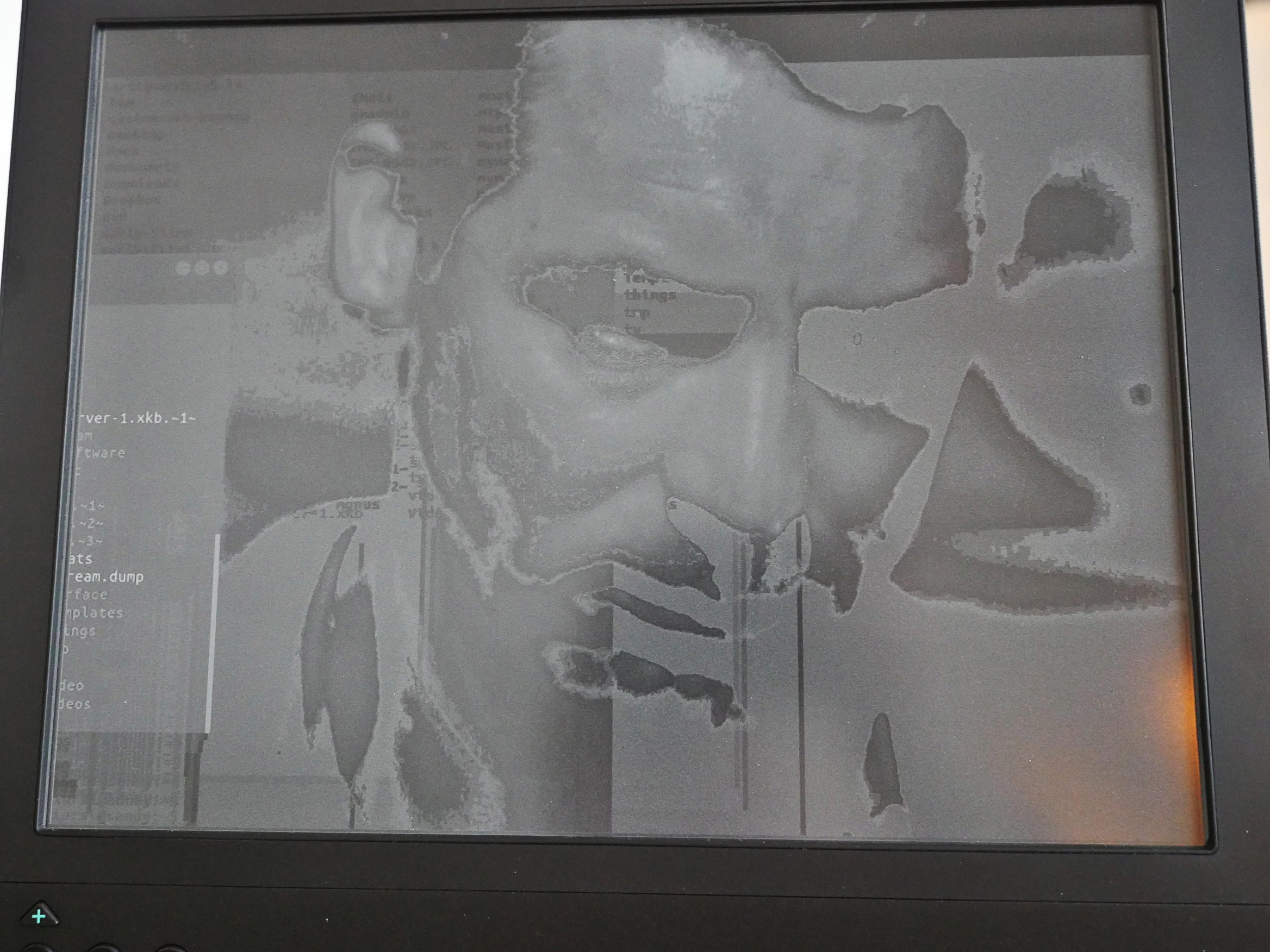 It turns out that this screen has several modes for doing conversion from colour/greyscale to black and white, and one of them are based on dithering. You get kinda fun effects by dragging things over the images, so it’s half the real image, half after images, and… 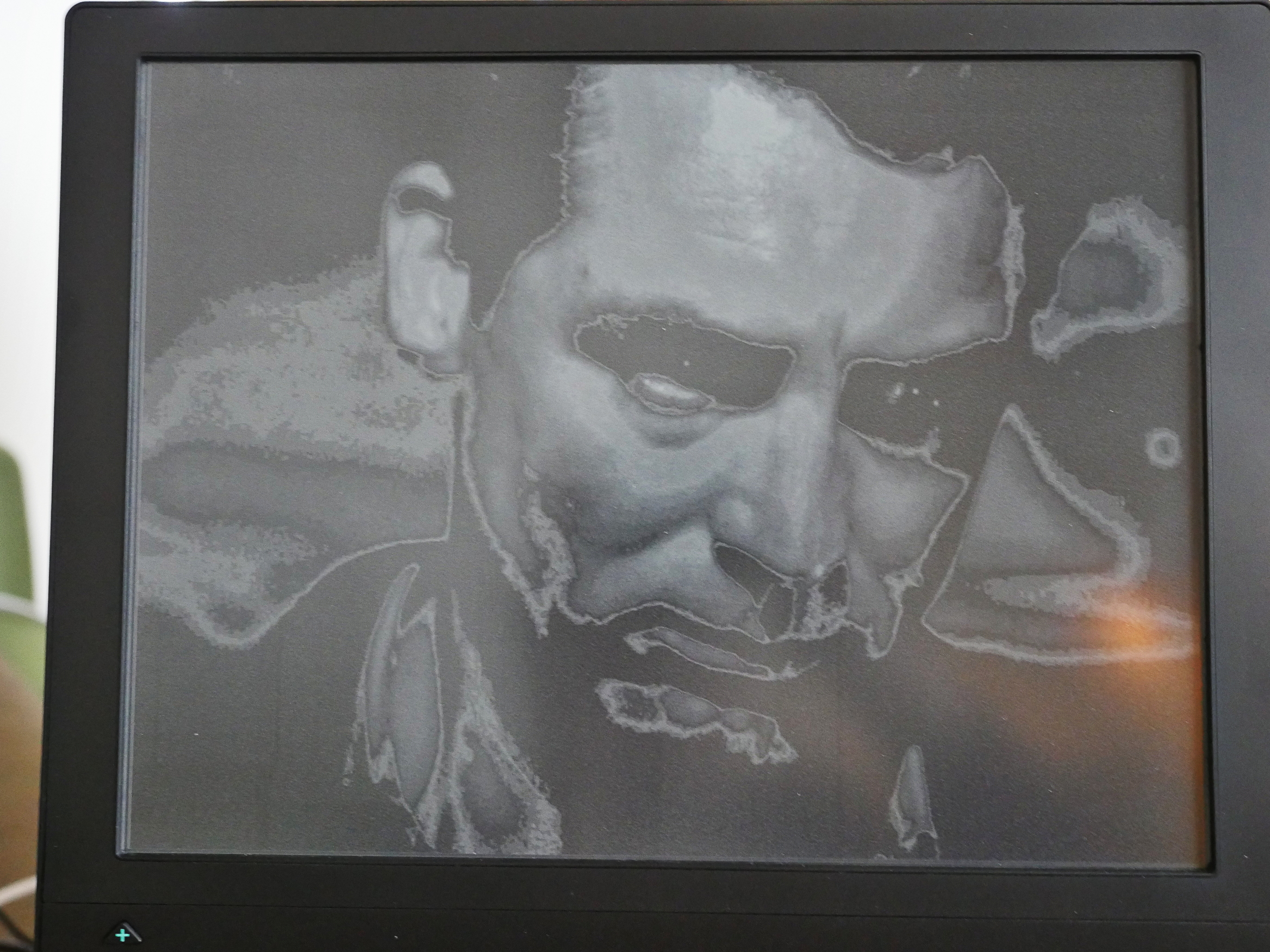 The software-refresh thing is available on Linux, so kudos to Dasung for that. However, it doesn’t work on Debian, only Ubuntu. And it’s not a command line program, but a GUI. However, it does bind a “hot key”, so I could definitely work around that by just sending the program some software-emulated keys.

The software refresh isn’t as thorough as the hardware button… and the program uses 100% CPU while running. Dasung hasn’t made the source code available, either, and people are trying to decompile it to figure out how to work with it.

OK, let’s just try to use it without the software and see what it looks like. 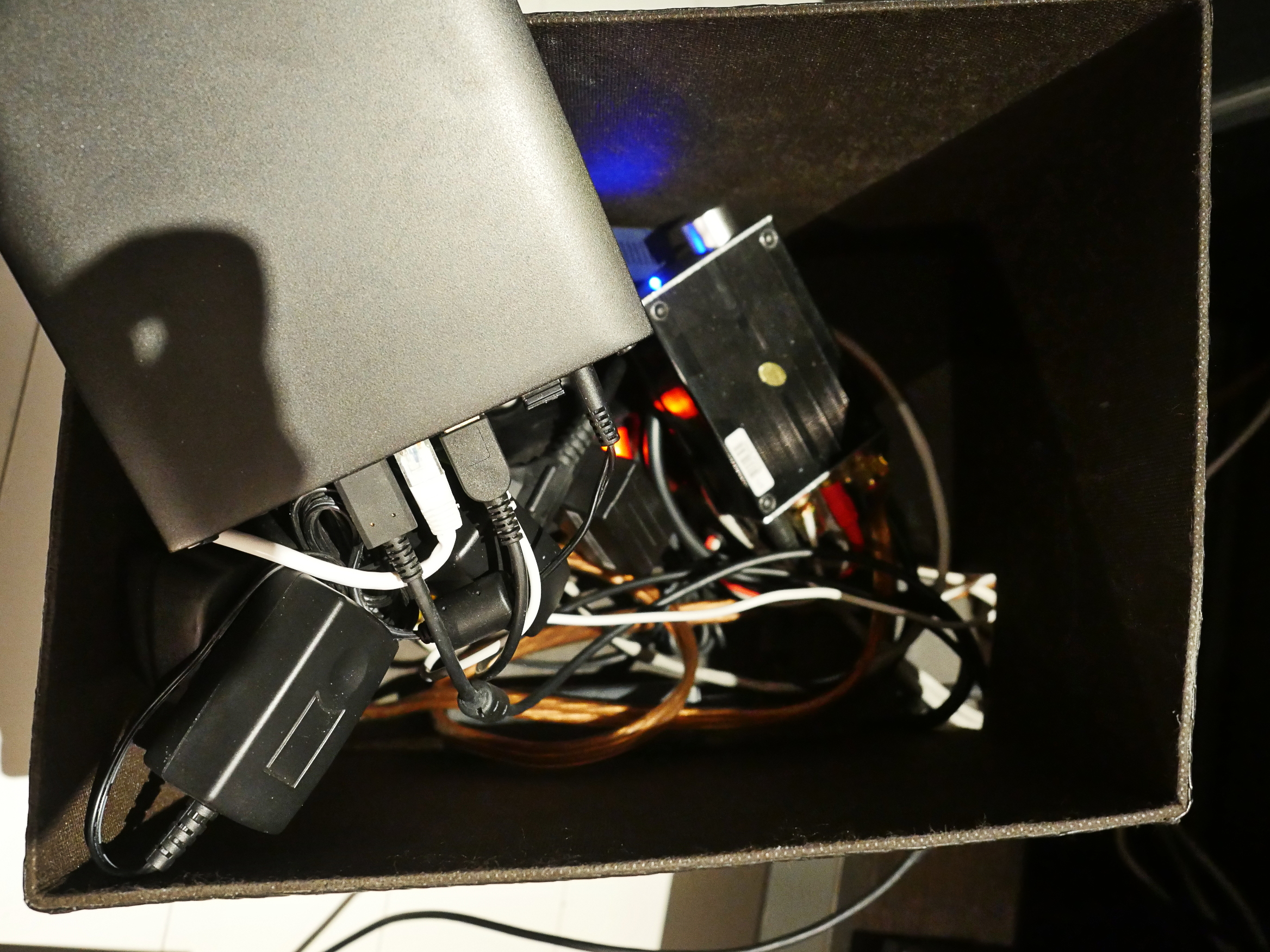 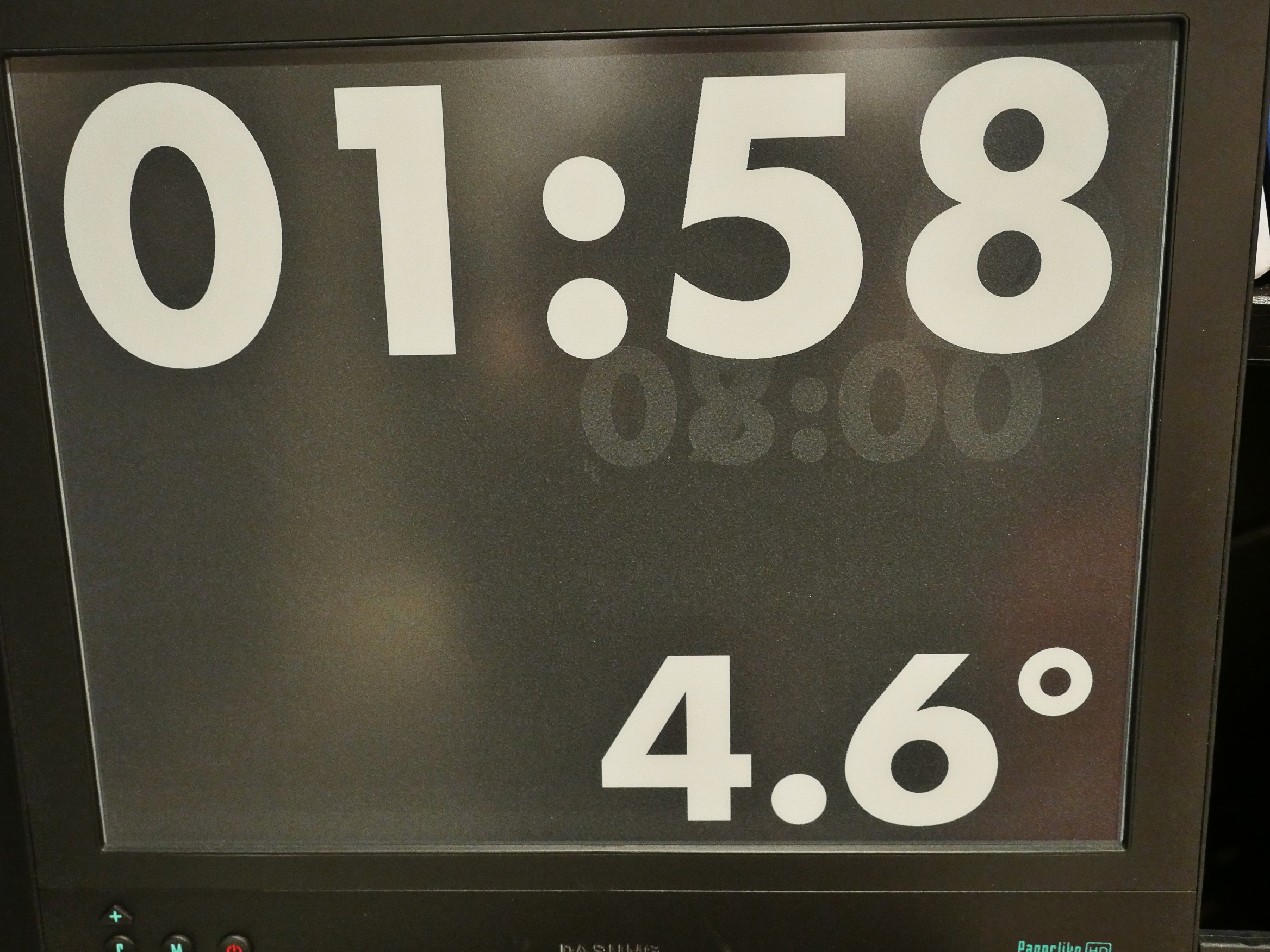 And… Hm. There’s definitely refresh issues, but not quite like I imagined. You can see the missing “08:00” (that was there before), but the time itself is very clear? 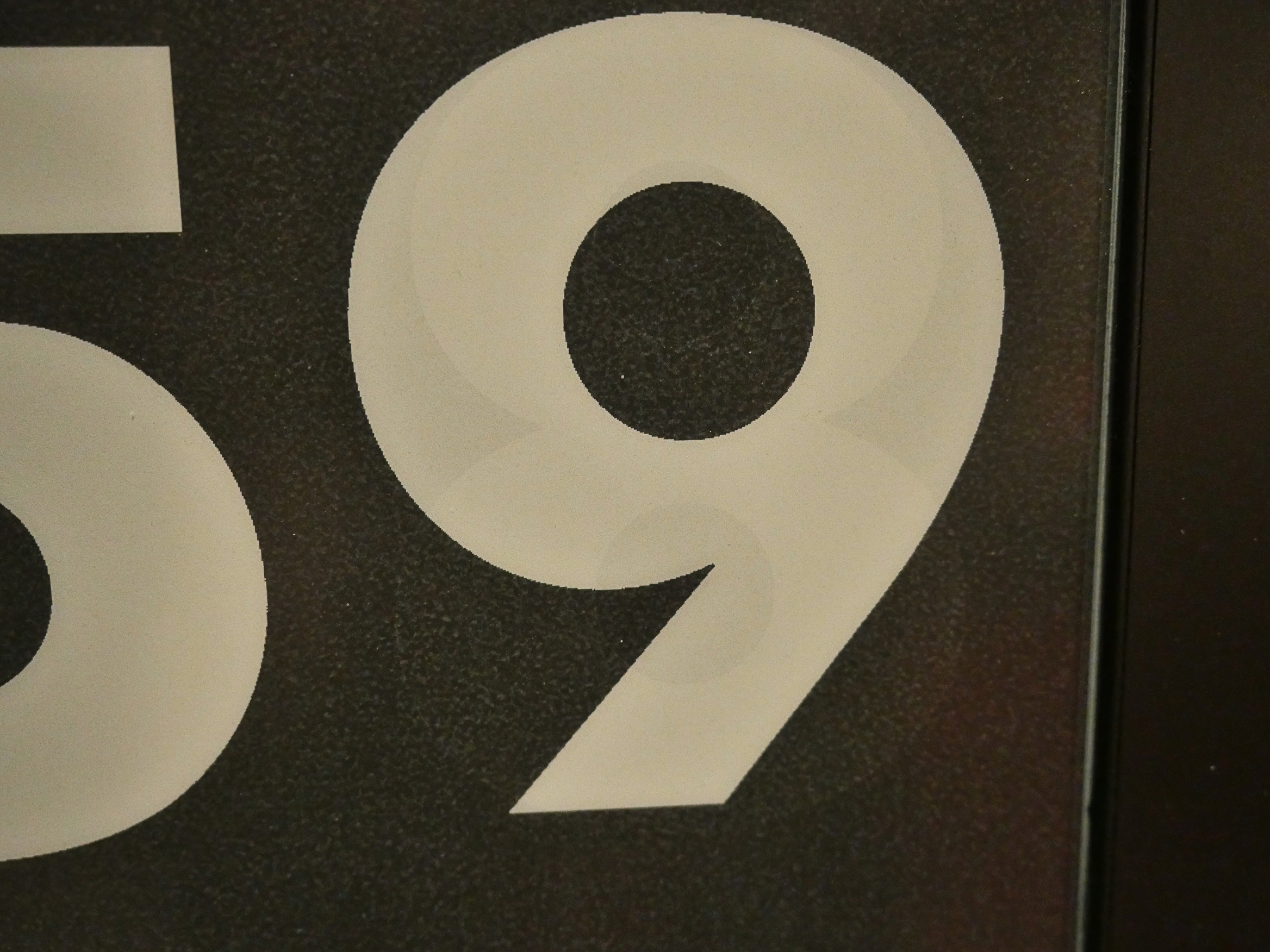 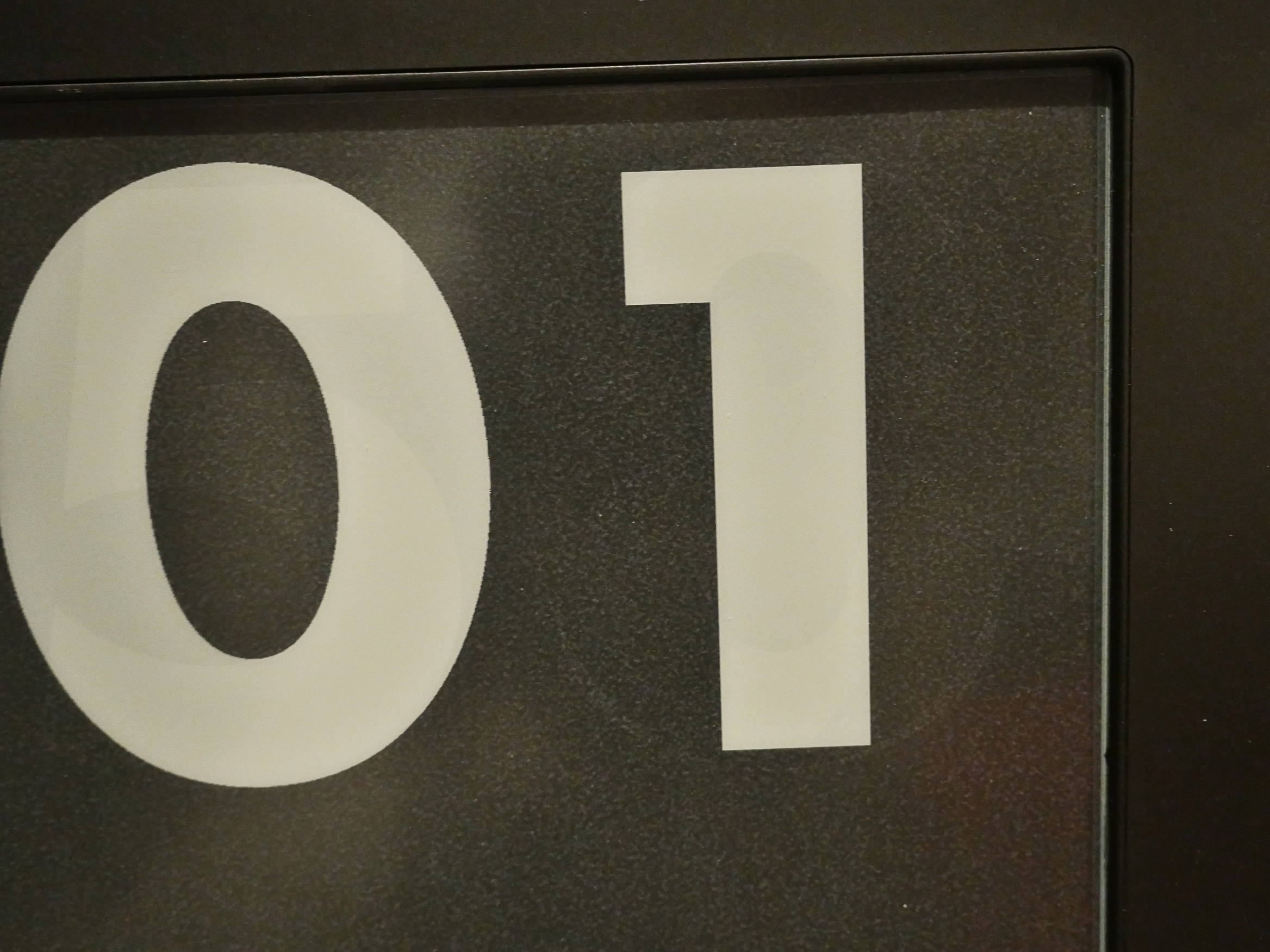 That’s not bad at all, I think? 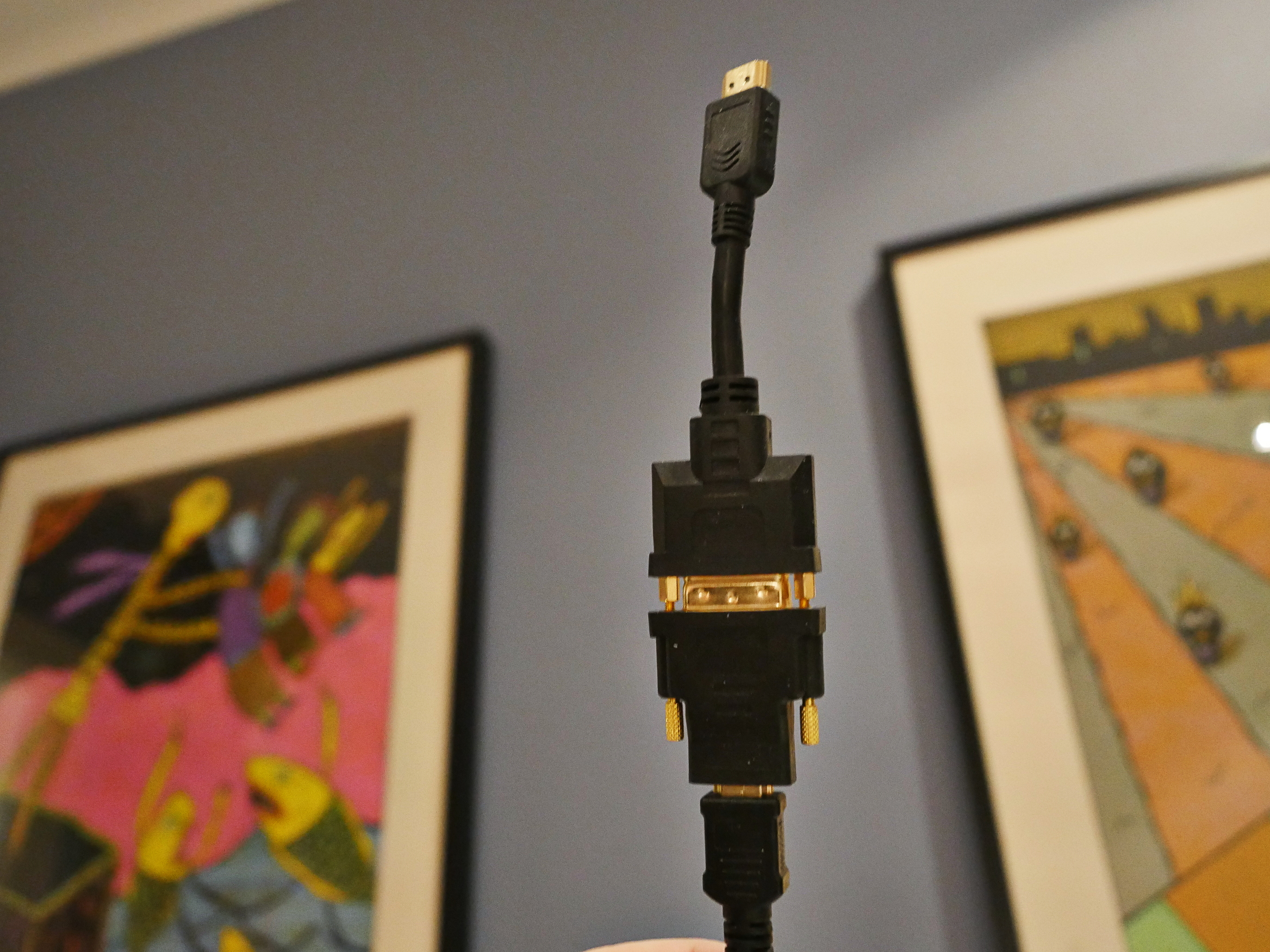 This is what it looks like from some distance. Can’t really see the ghosting at all. Nice!

But then I tried to use this thing tonight, and it turned out that I couldn’t really make the clock out… because it’s too dark! Duh. So I need some lights that I can flick off and on.

Do USB-based lights allow that? It depends? Seems like only very specific hubs has support for this stuff? Are there any USB lights that you can program? That like expose a serial interface you can say “off” to? No? For now, I’ll just use a small Ikea lamp and control it via the Tellstick interface. There! I have the on/off light switch by the bed, so perhaps this’ll work… Perhaps a light that can be mounted on top of the screen would be better, but there’s some glare from the screen, so I’m not sure whether that’ll work. Worth a try, though.

I’m going for a Designers Republic kinda vibe with the design. What you’re looking at is, of course, an Emacs buffer, but I’m using SVG to get things lined up better now.

I mean, not lined up. But better.

One thought on “Paperlike HD”