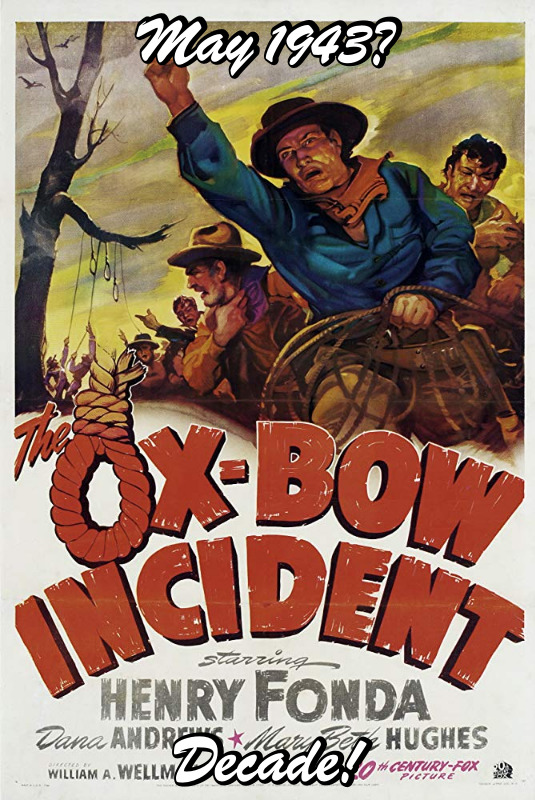 Oh! A western! With a name like that I thought this was going to be about an obscure Pacific naval battle or something.

This is from a director, William A. Wellman, who’s done a shit-load of movies, but who’s unknown to me, for some reason or other.

Aaaanyway. This is a kinda odd western. It’s about a posse going after a criminal, but it’s mostly about the moral ramifications of taking the law into your own hands and all that stuff. Which makes me wonder whether this, taking the timing into account, is a pro-Nazi movie in disguise somehow. Is cow-rustling a metaphor for invading Poland?

Oh, oh, I get it! I mean, this is American movie making a passionate case against lynching people. The people being lynched at the time in the US were black people… so is this really an anti-racist movie?

Or is it just generally saying that a judicial system is a nice thing?

Or is it a totally metaphor-less movie just telling a story about the Old West?

“I thought there were one white man among you.”

So I don’t know what’s this about, but is it any good? This is Clint Eastwood’s favourite movie, and has a generally positive reception. There’s a lot of very pretty imagery here. The actors are arranged superbly to catch their best angles, and the matte painting is superb.

But I don’t know. I was scratching my head more than I was getting into the characters, really.

Popular movies in May 1943 according to IMDB: