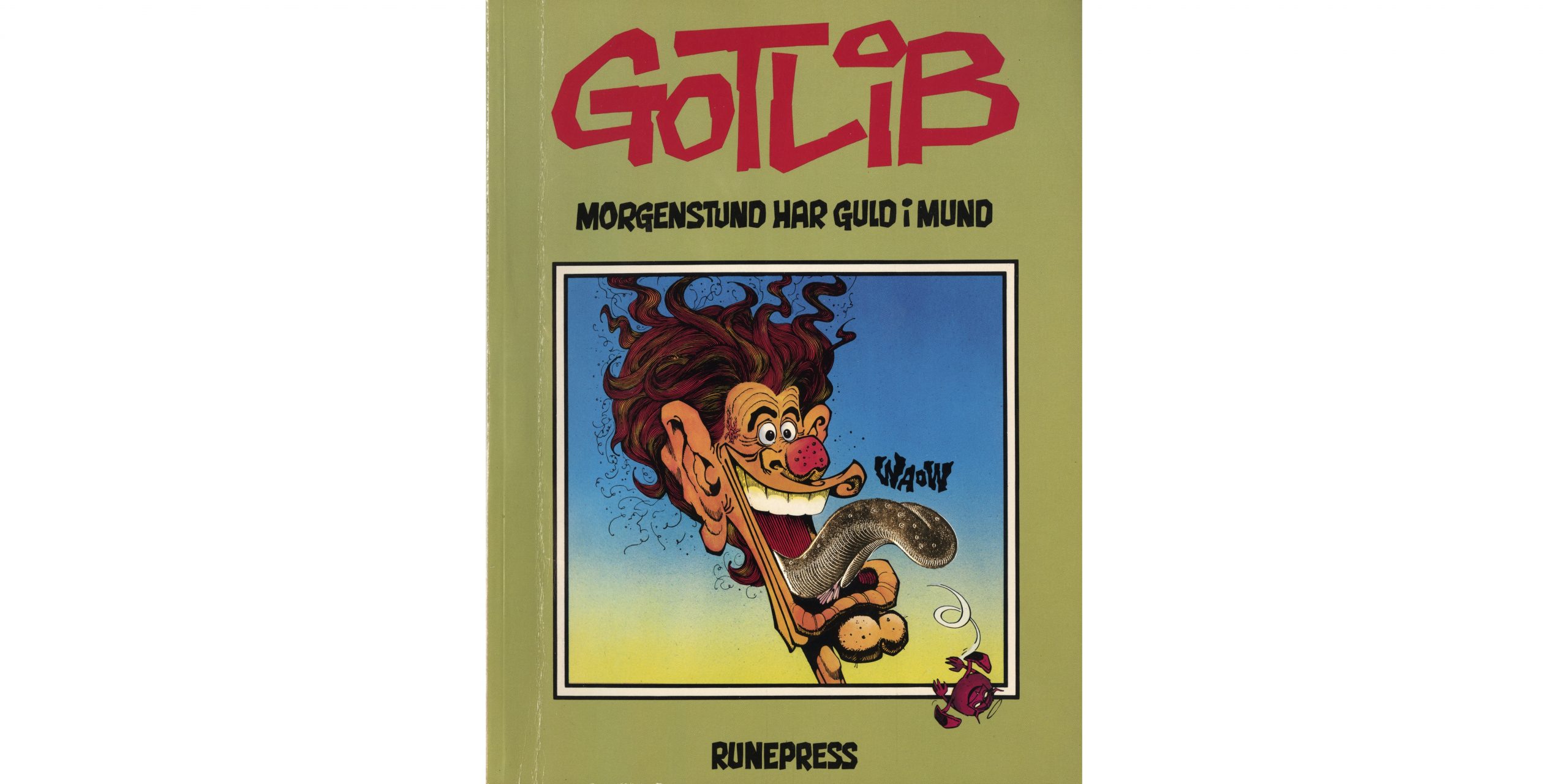 Gotlib was a prolific cartoonist, working from the mid-sixties until his recent death. He started out doing comics for the French Pilote magazine before co-founding two magazines, l’Echo des savanes and Fluide Glacial. Out of his dozens of albums, c. nothing has been translated to other languages. 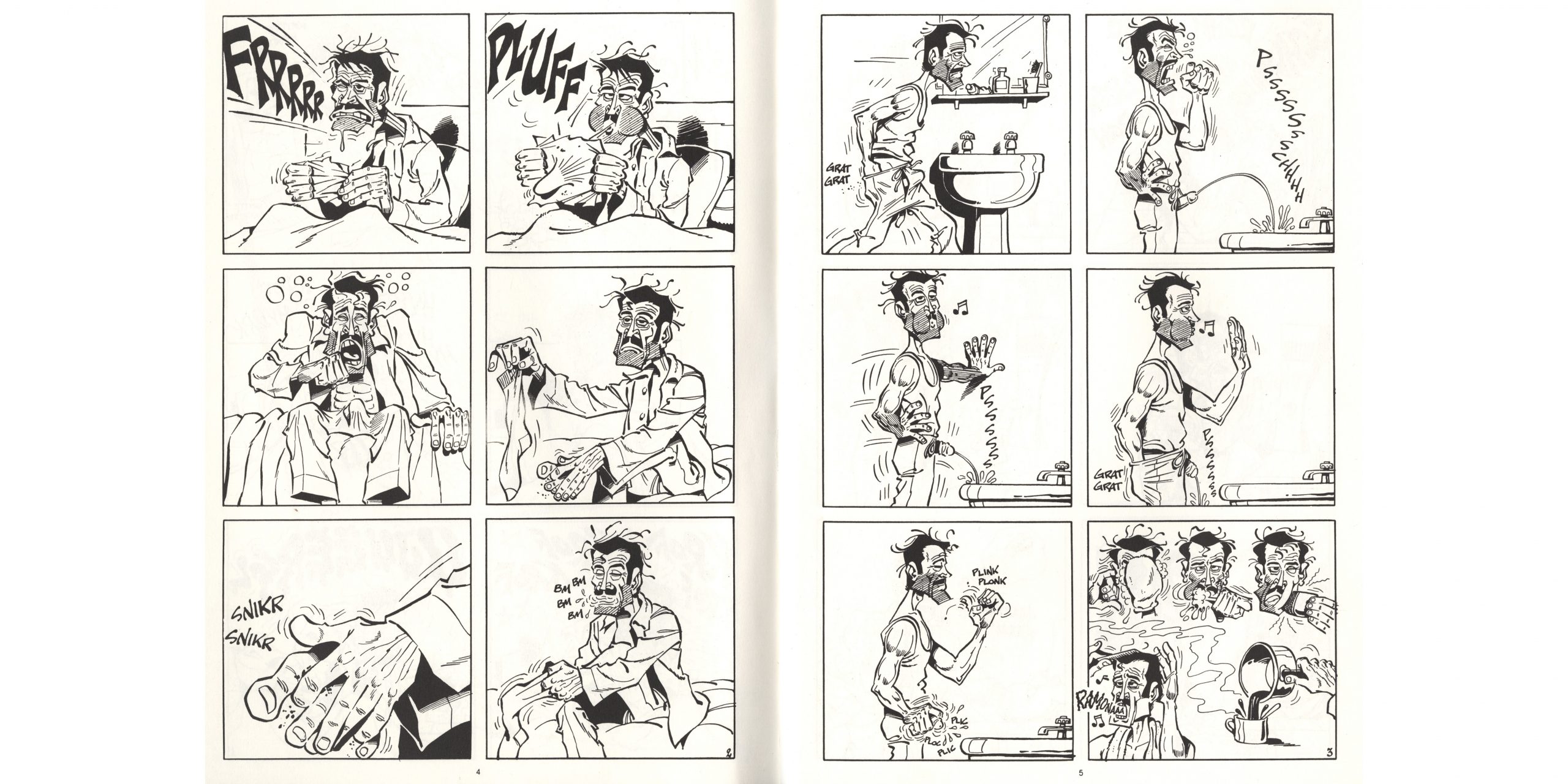 Runepress made a go at it in the early 80s with these four albums, which collect work originally published at l’Echo (the first and third); the second was serialised in the music magazine Rock et Folk; and the fourth in Fluide. And it’s not difficult to see what attracted those weird Danes to this, er, corpus: It’s relentlessly scatological and weird. 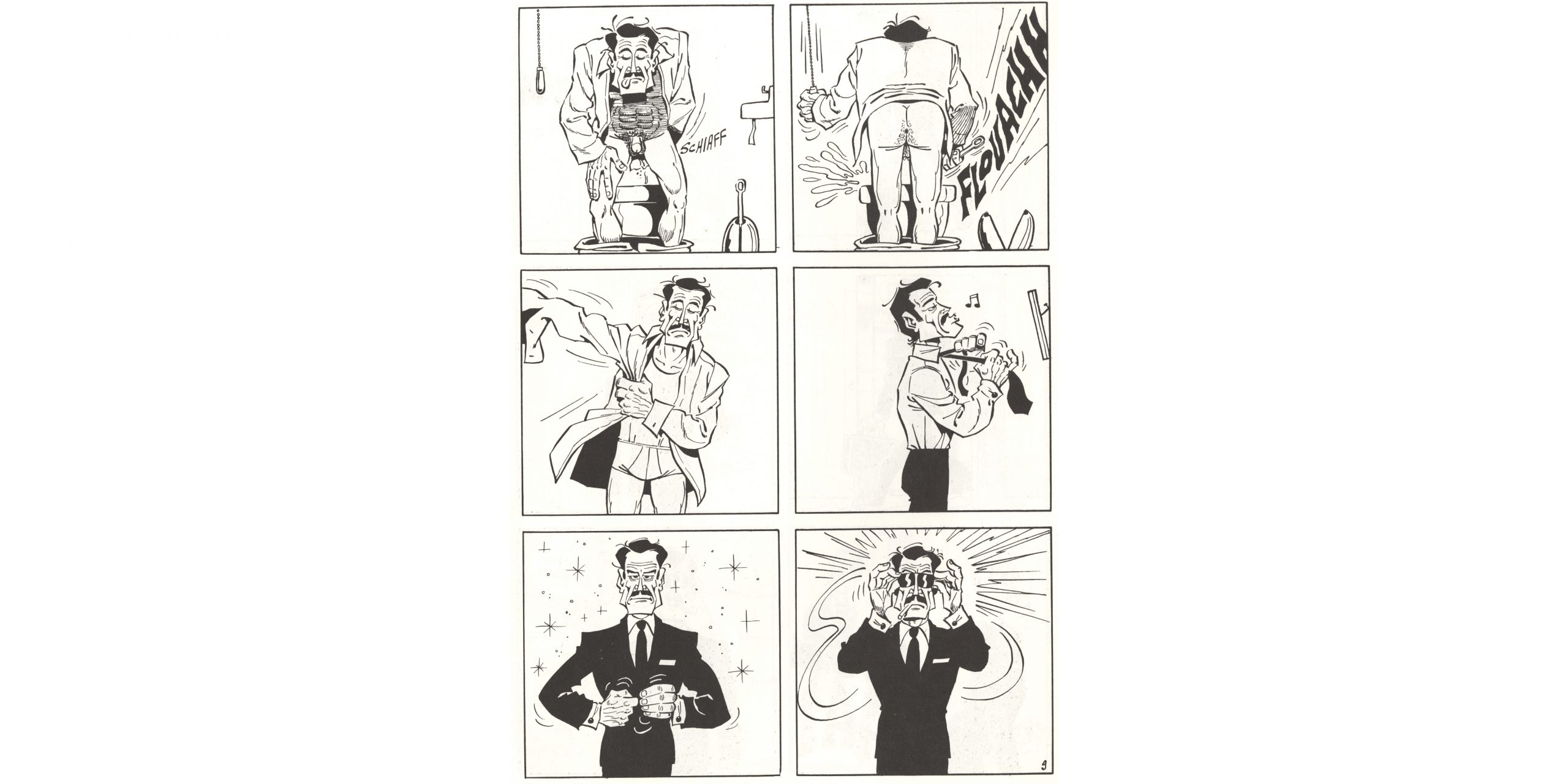 But it’s not just poop and semen jokes for the fun of it. Gotlib, in these strips (originally published in 1973) makes fun of people trying to present a bourgeoisie front by showing that they, too, pick their noses and wipe their asses. (But do all French stand while wiping? Tardi draws it that way too…)

Oh, geez. Is this 9gag or something? This is a serious blog! 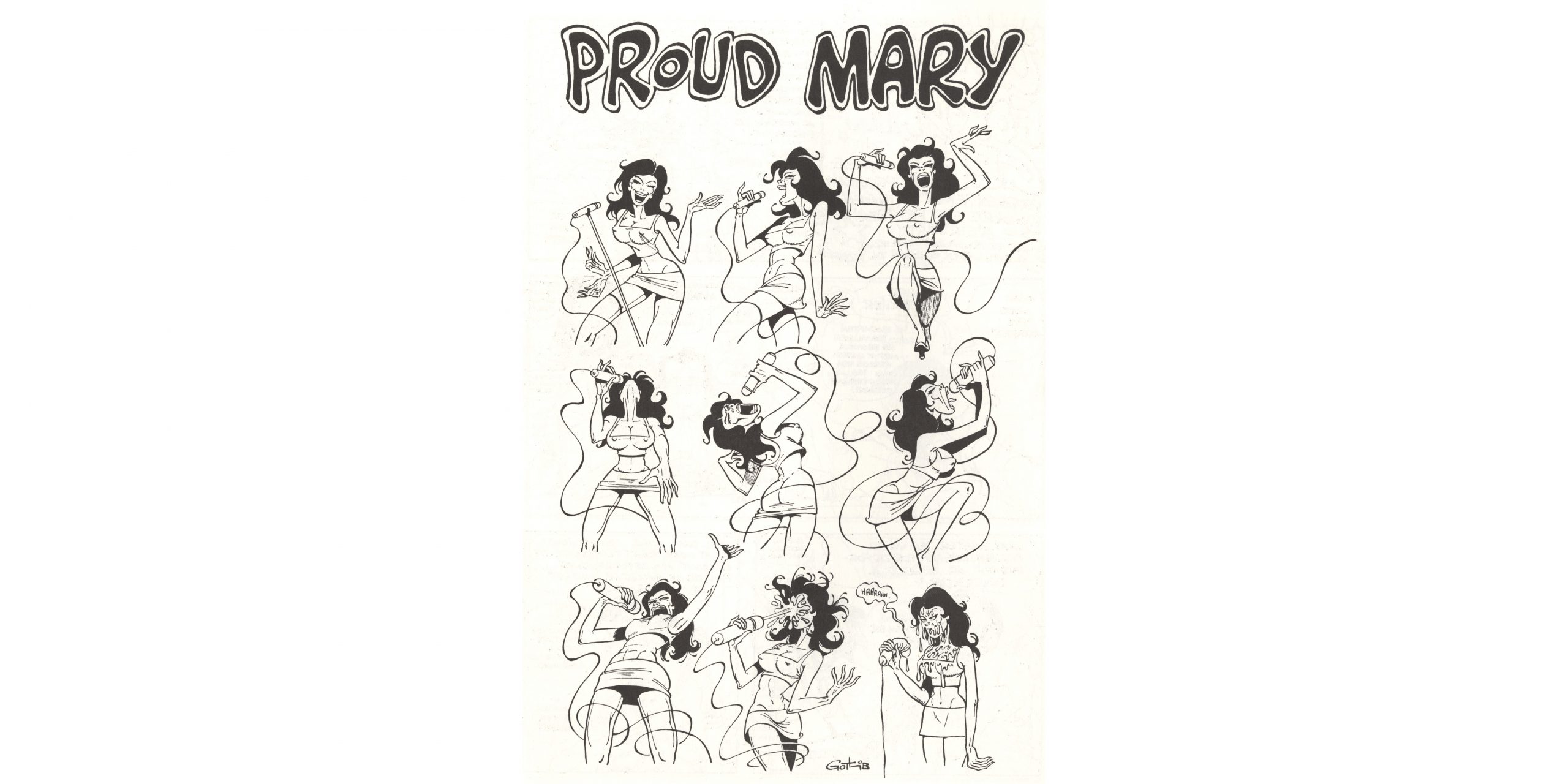 Or… perhaps not. Yes, I didn’t mention it in the introduction, but there’s a lot of phalluses, figurative or actual, in these comics. 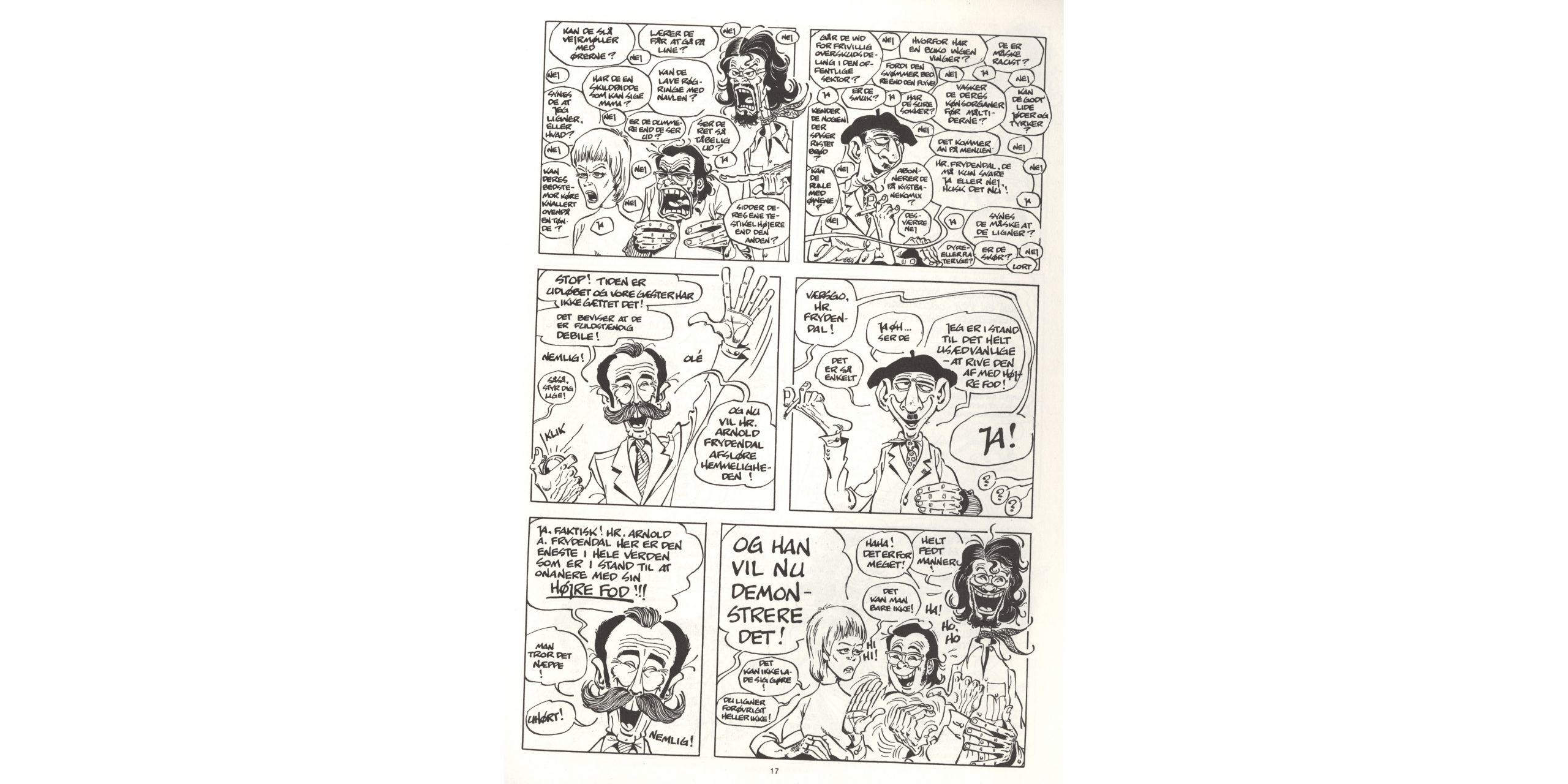 Hm, the first few pages quotes here might leave the impression that it’s all pantomime, but it’s not. About half the pieces are these extremely wordy and very witty skits. At least the Danish versions are very funny, but I’m guessing the original Greek is also a bunch of laffs. 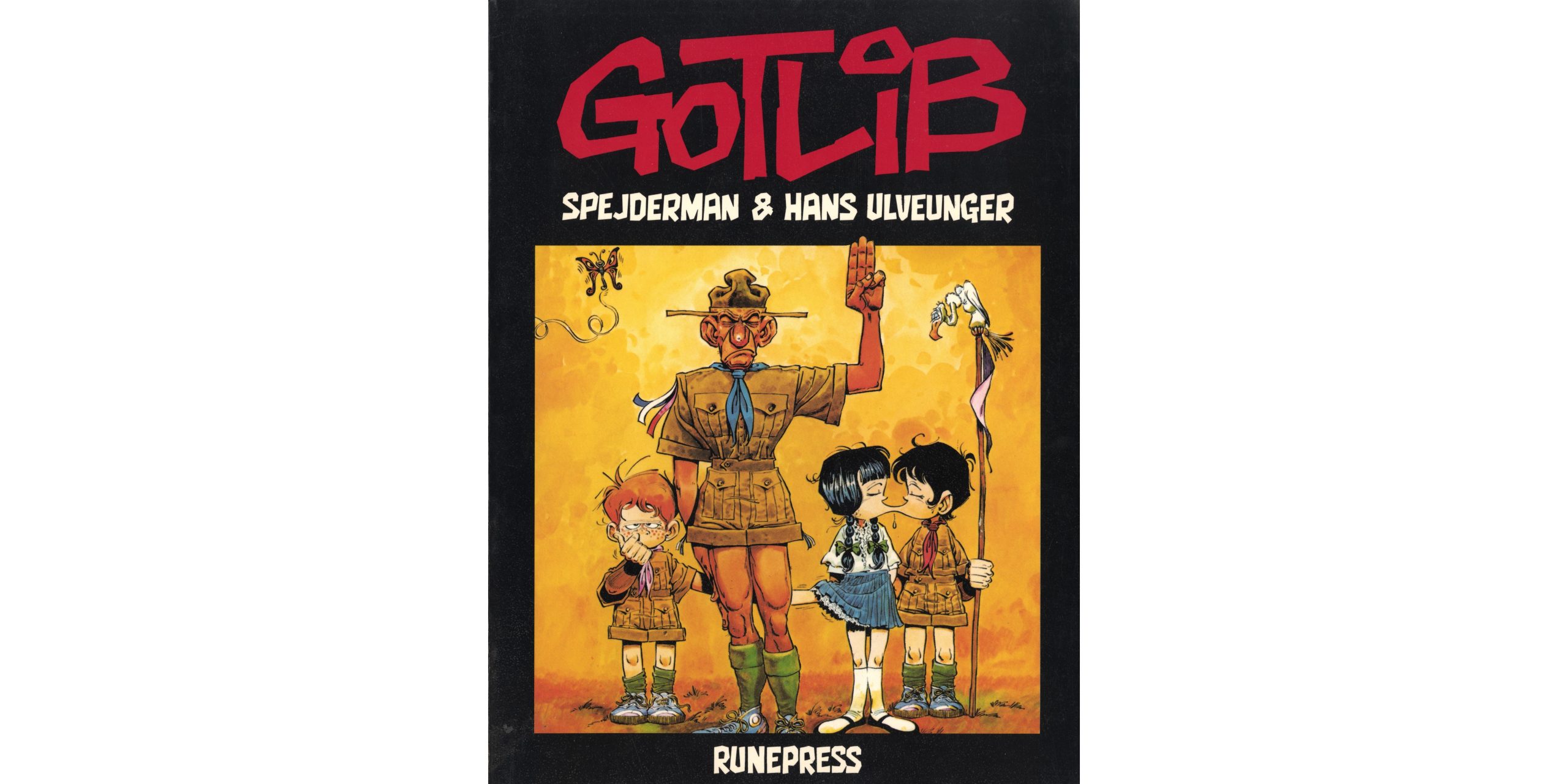 OK, so we have poop jokes and silly word play: It sounds like wholesome fun that you’d see translated to all languages in the world and kept in print indefinitely, instead of Runepress making a go at it for two years and then Gotlib would never be seen again? 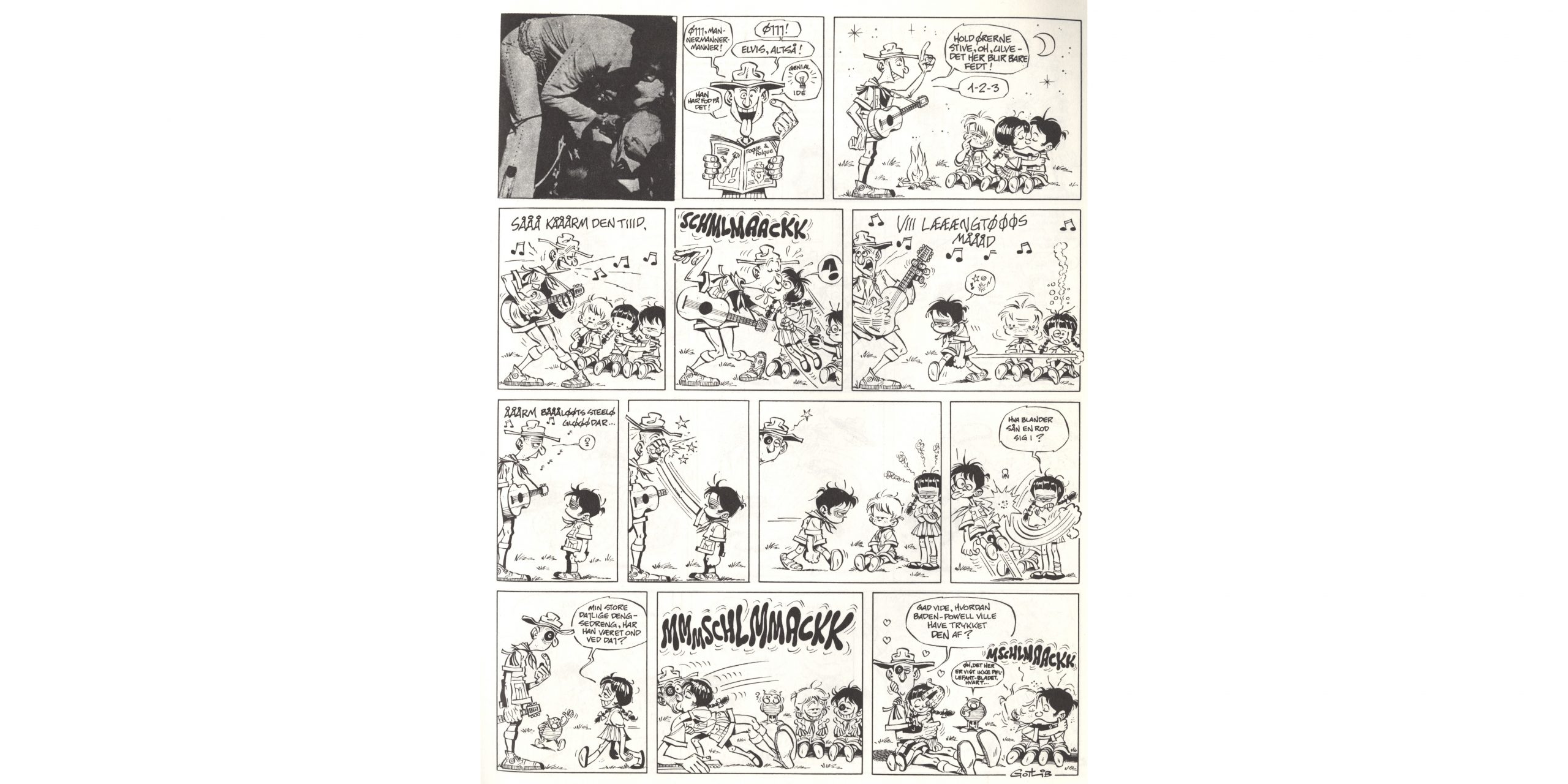 There’s a lot of sex jokes in these books, and I’m not going to excerpt the ruder ones. This is a family oriented blog! As Lambiek says, “Already risqué back in the 1970s many gags are nowadays perhaps even more disturbing to those who are easily offended.”

In this album, all the jokes are about a Scout leader and his flock, and if a Scouting/sex joke comic sounds like a major seller to you… 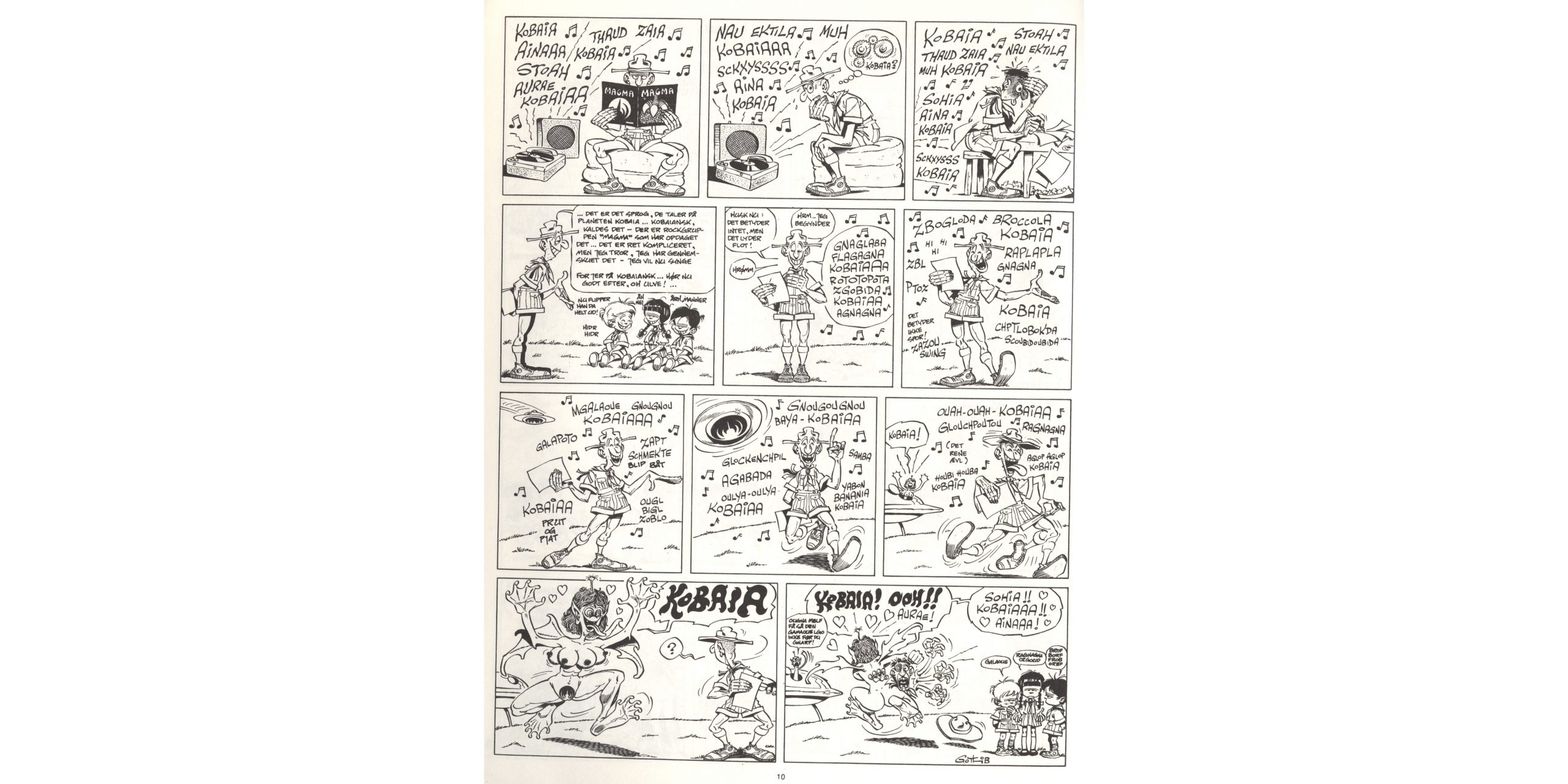 But, in general, it’s really, really silly and absurd. 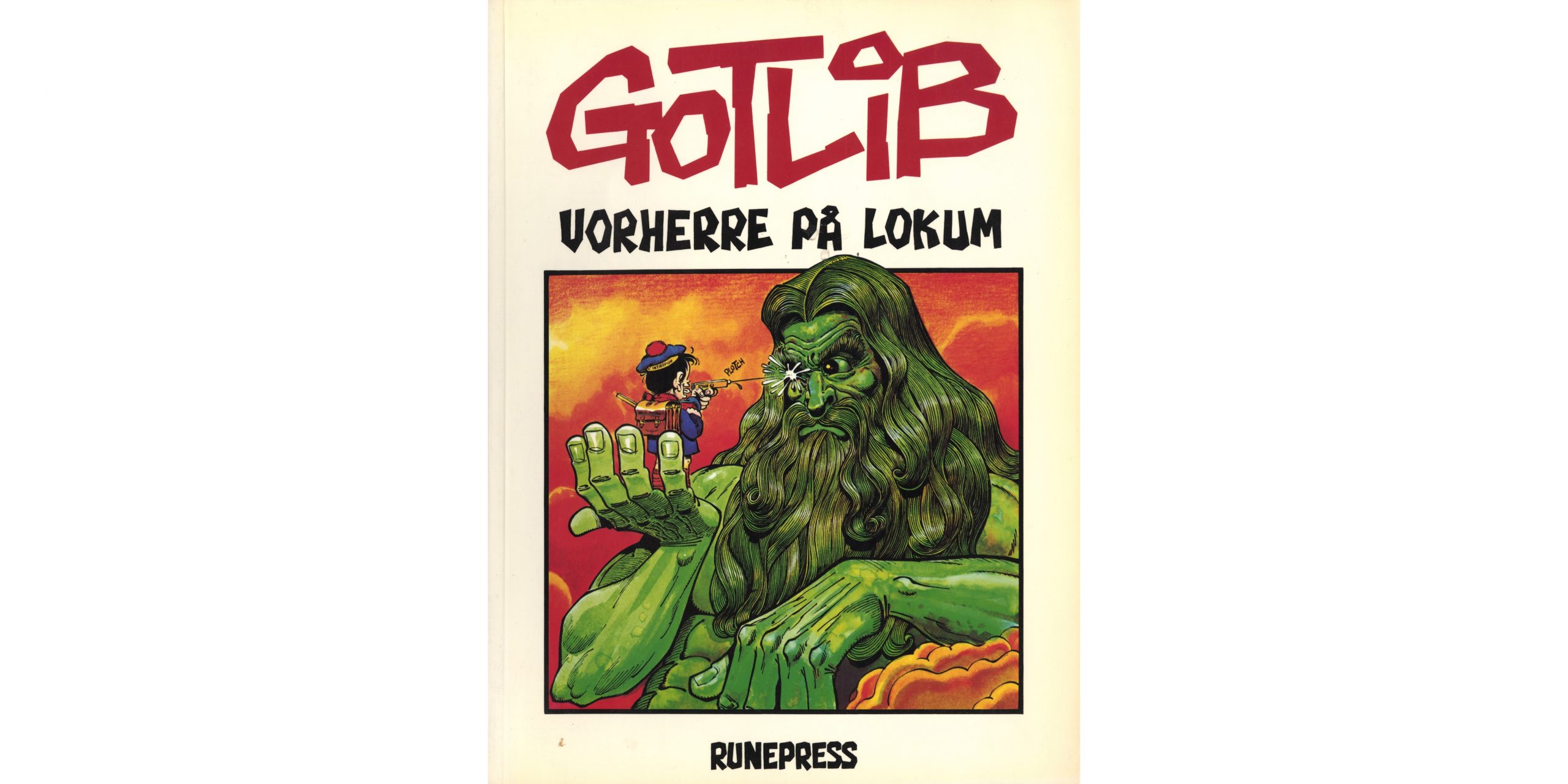 Things reach the apex of things-that-shouldn’t-be-posted-on-wordpress.com-ness in the third album. Here’s the least rude page: 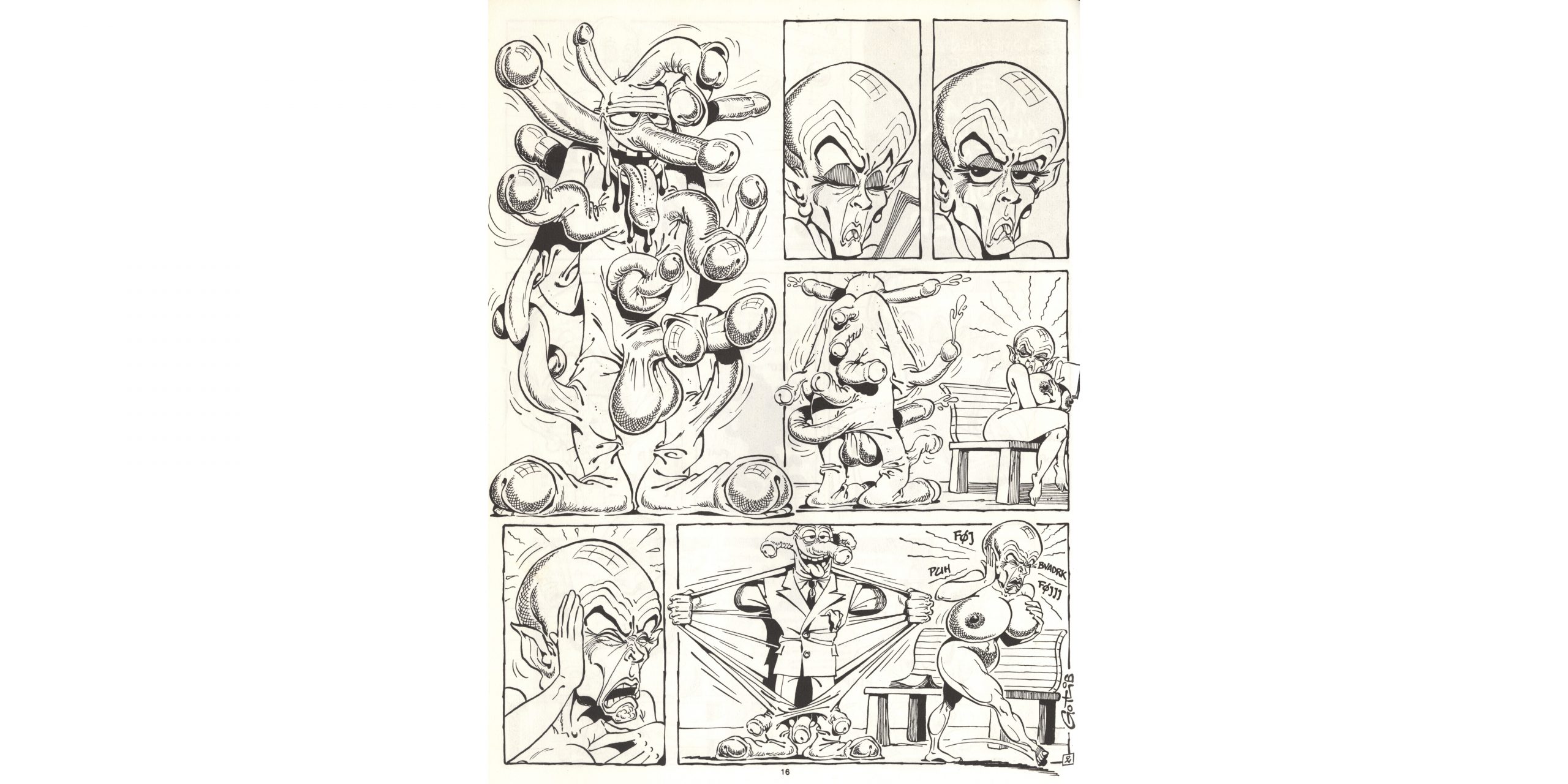 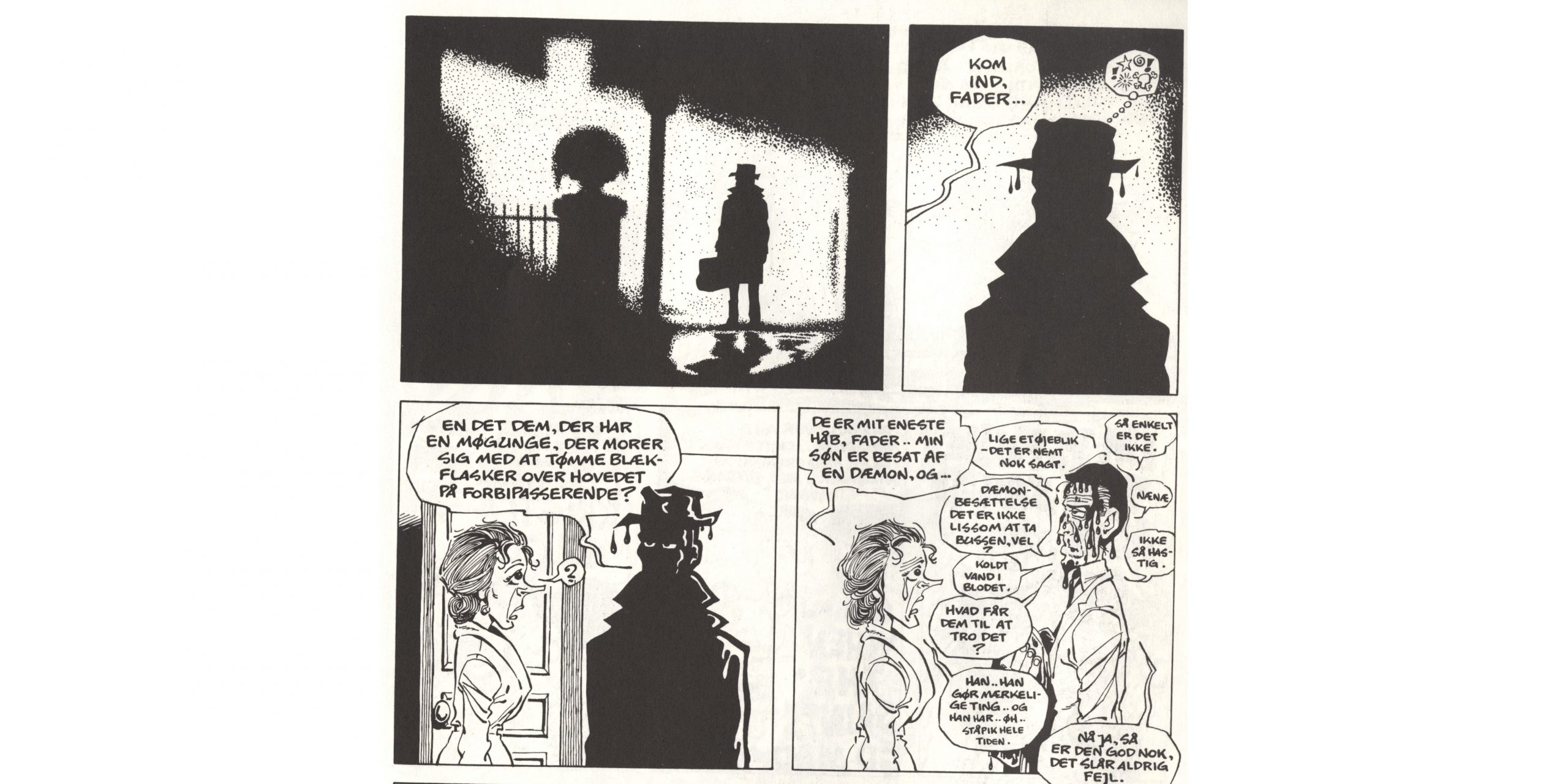 The funniest strip is the Excorcist parody that features a possessed boy instead of a girl, but since the boy has a hard-on through the entire strip, I’ll just excerpt this gag instead. Yes, the possessed boy poured ink out the window onto the priest.  Did Mad Magazine do the same joke? 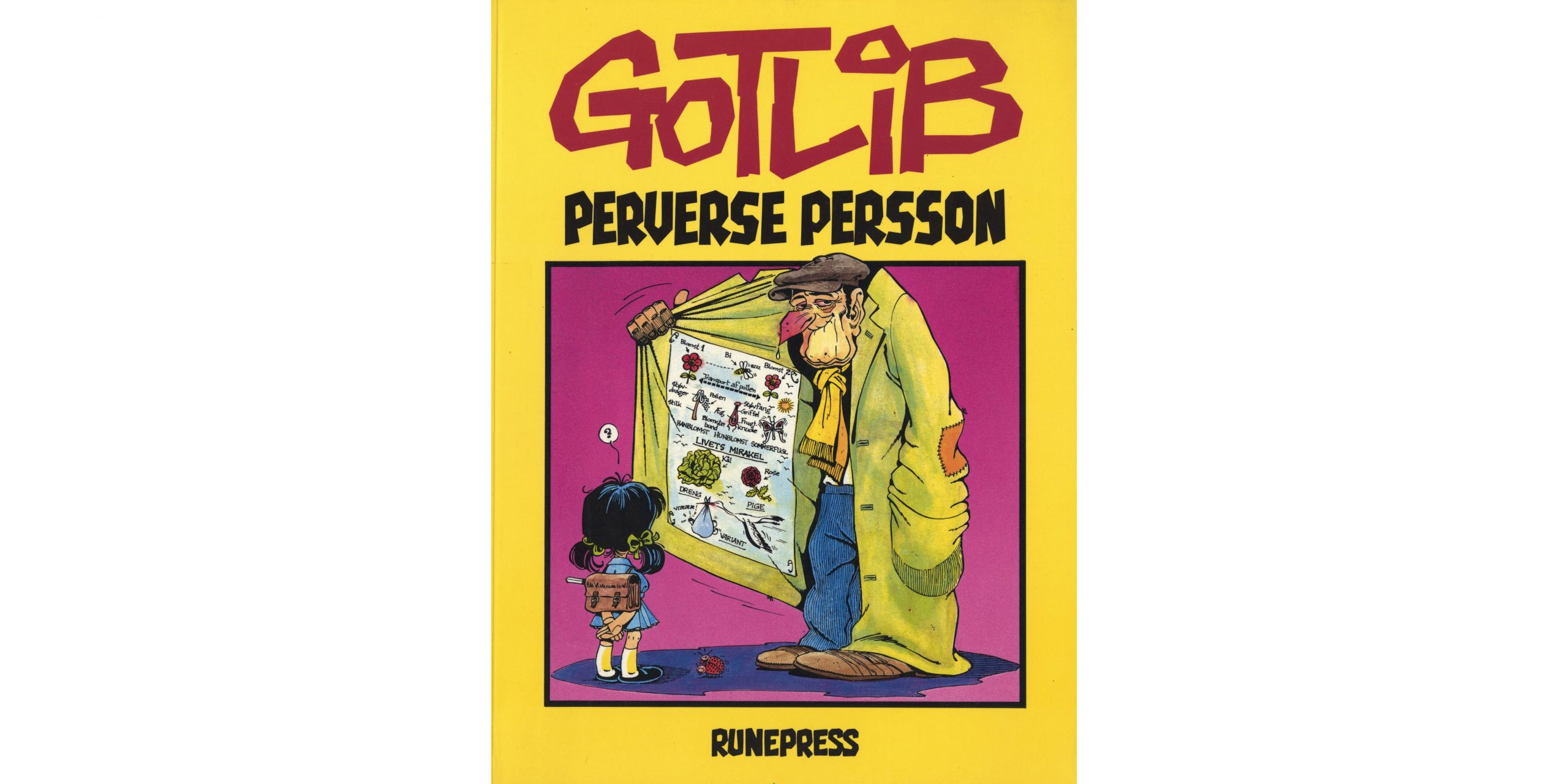 After all this depravity, you might expect Gotlib to take it a notch up with something called “Pervers Pépère”, but it’s innocent in comparison. 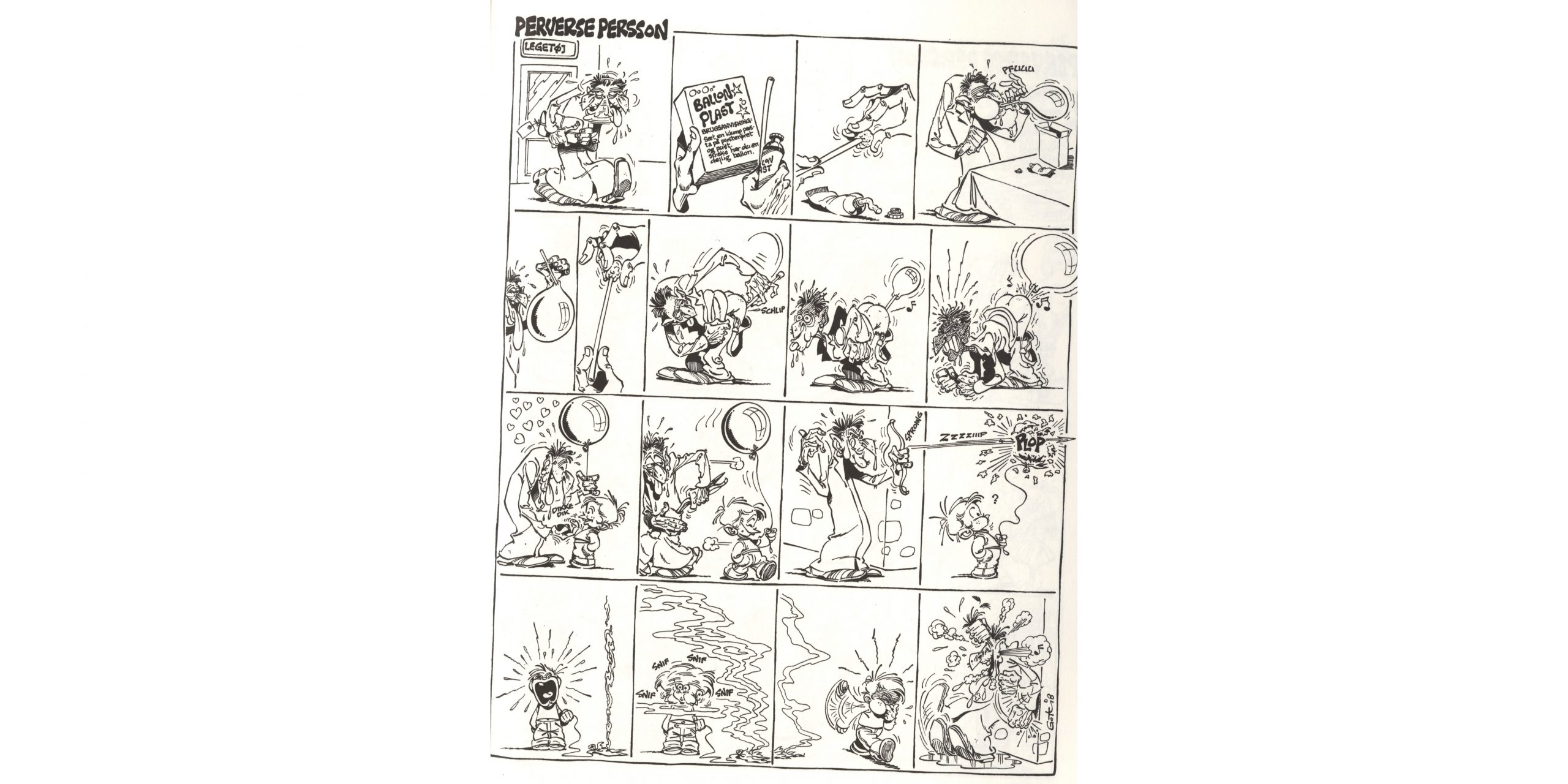 There’s a lot of convoluted fart jokes. But by this time, it’s the 80s, and perhaps Gotlib felt the need to step back from the outrage. 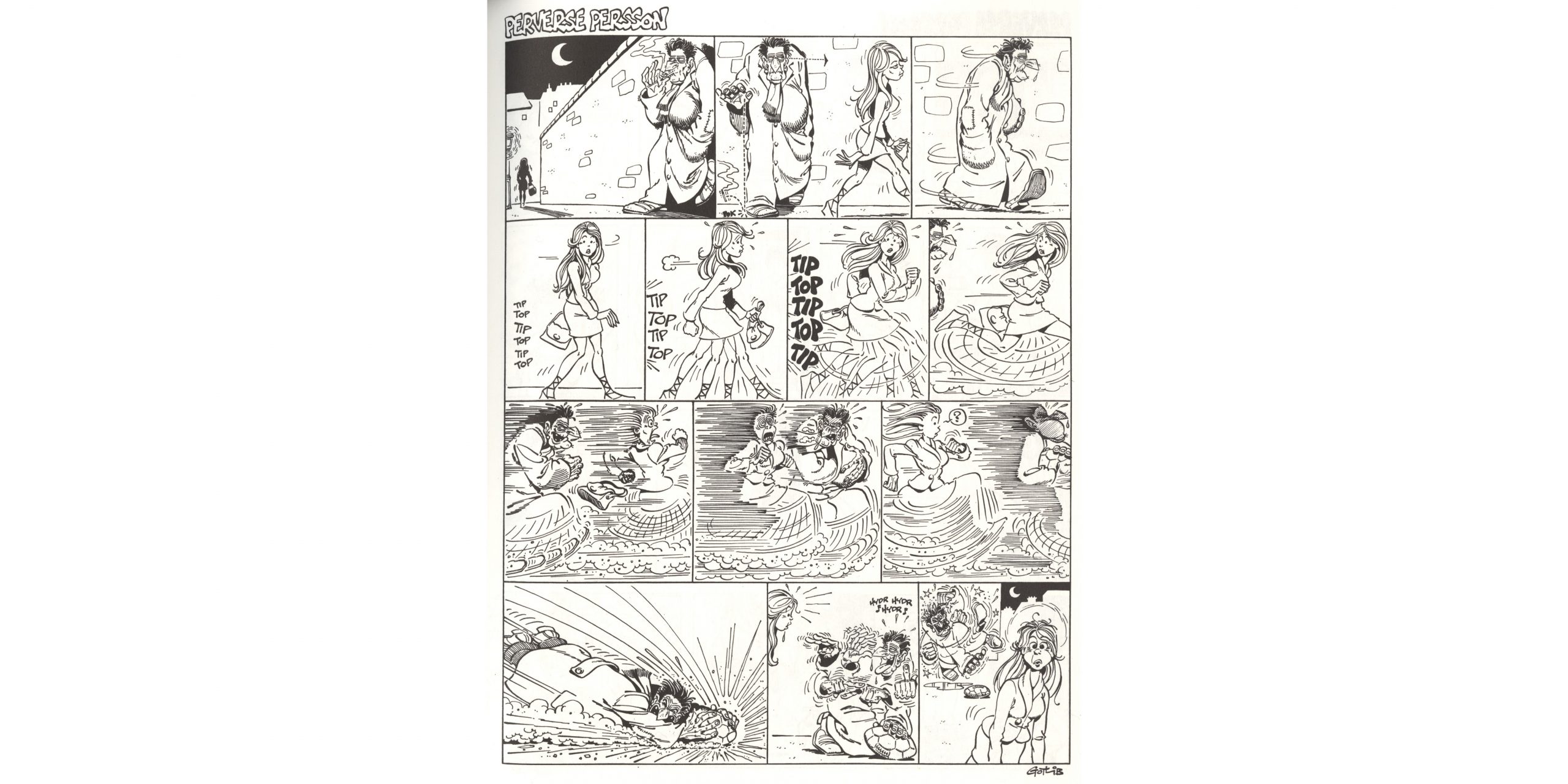 Instead most of the jokes here are about the reader or the characters thinking that something involving genitalia is going to happen, but then it doesn’t. And that gives Pervers Pépère a laugh. So his perversity is that he doesn’t go for the sex… 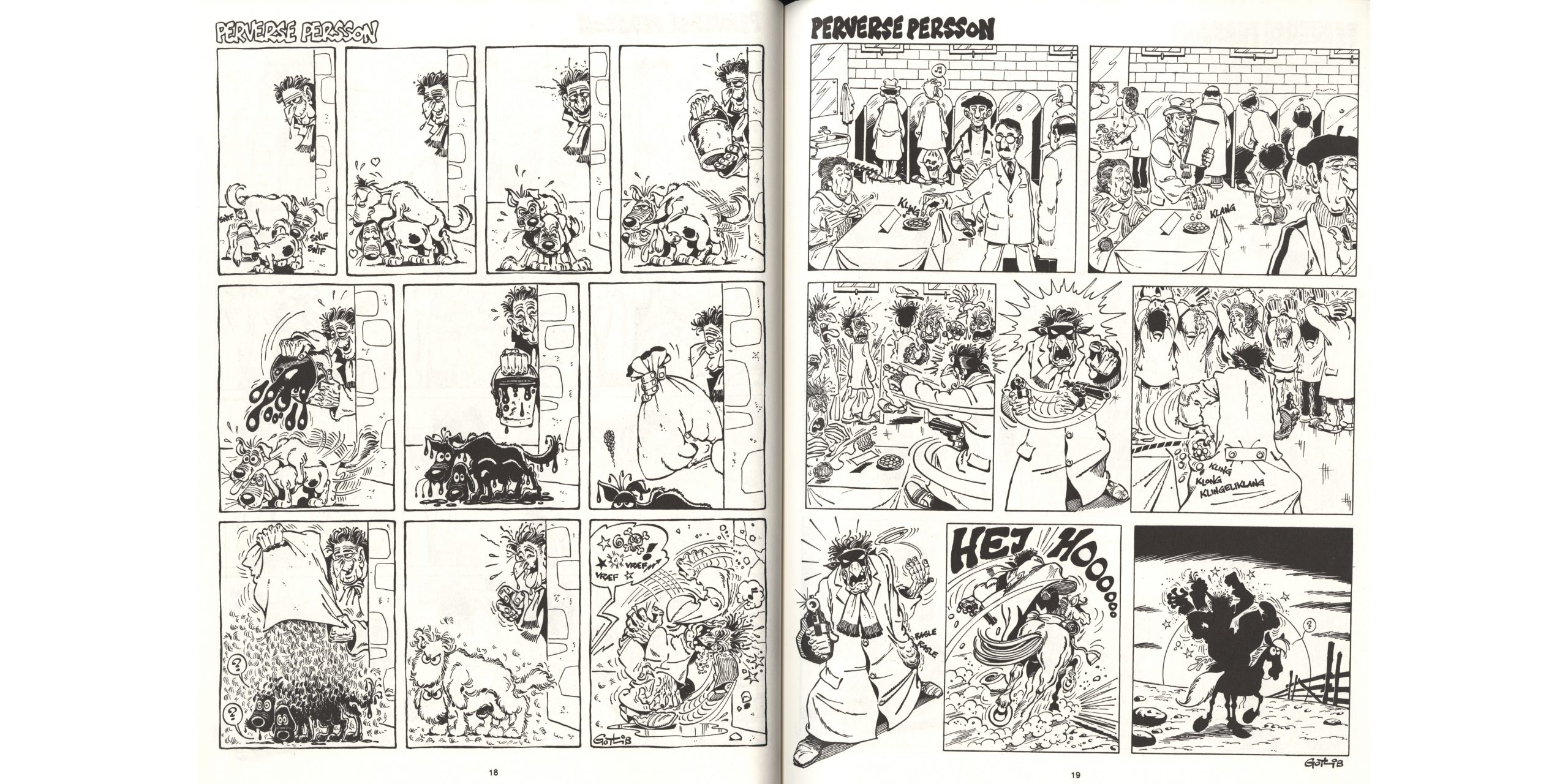 But as with the un-hilarity of the implied rape threat above, most of these strips seem to be looking for a punchline without finding it. Instead we’re just presented with an absurd thing that Pervers Pépère does and then… nothing.

So, to recap: When Gotlib is virtually unpublishably obscene, he’s really funny, but when he’s not, he’s just not that funny. If this is the general gist of his career (and I’ve just read these four books, so this is a very uninformed assumption), then it’s not surprising that he remains unknown outside of France.