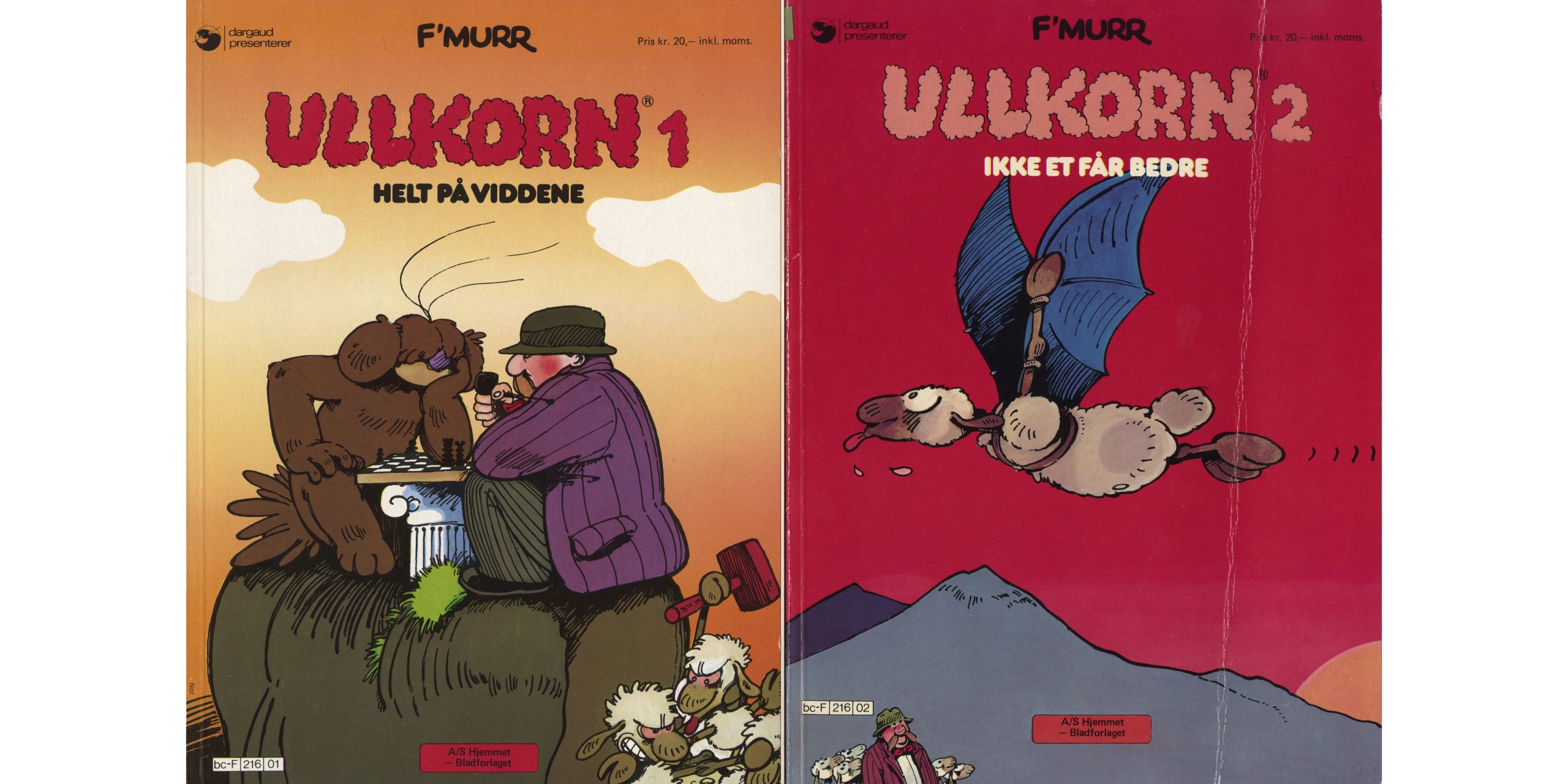 Le génie des Alpages is a series started by F’Murr(r) in 1973. It was originally serialised in the French Pilote magazine and then collected in albums from 1976 on. The Norwegian editions I have seem to (unusually enough) to track the French publications closely. 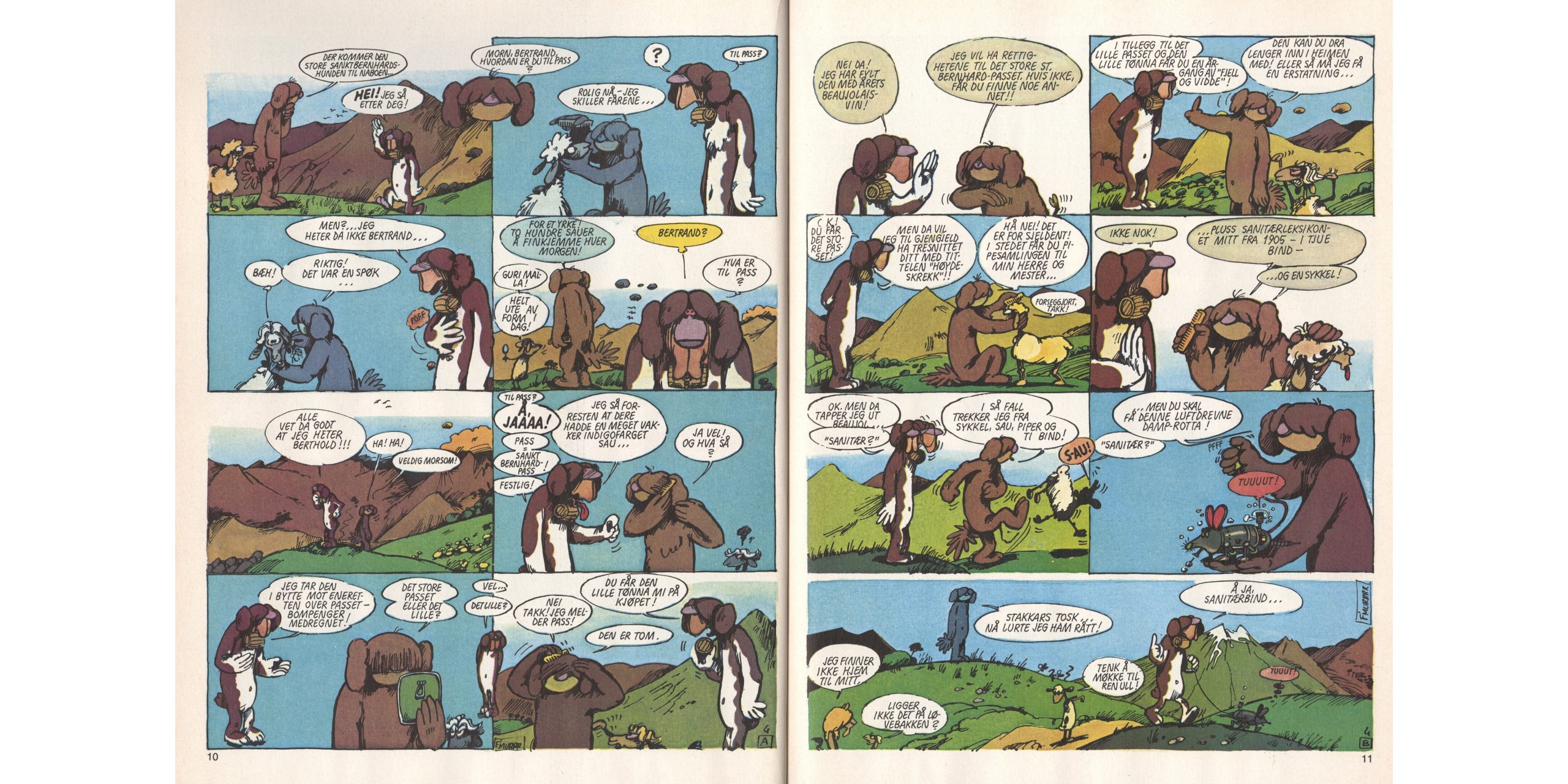 For the first years, F’Murr adheres to a two-page gag format. In the albums, every two-page spread is a little tale of escalating insanity with constant asides and wordplay. The Norwegian translators have really put their hearts into this thing: There are so many puns on various forms of words for “sheep” in these books that the mind reels. 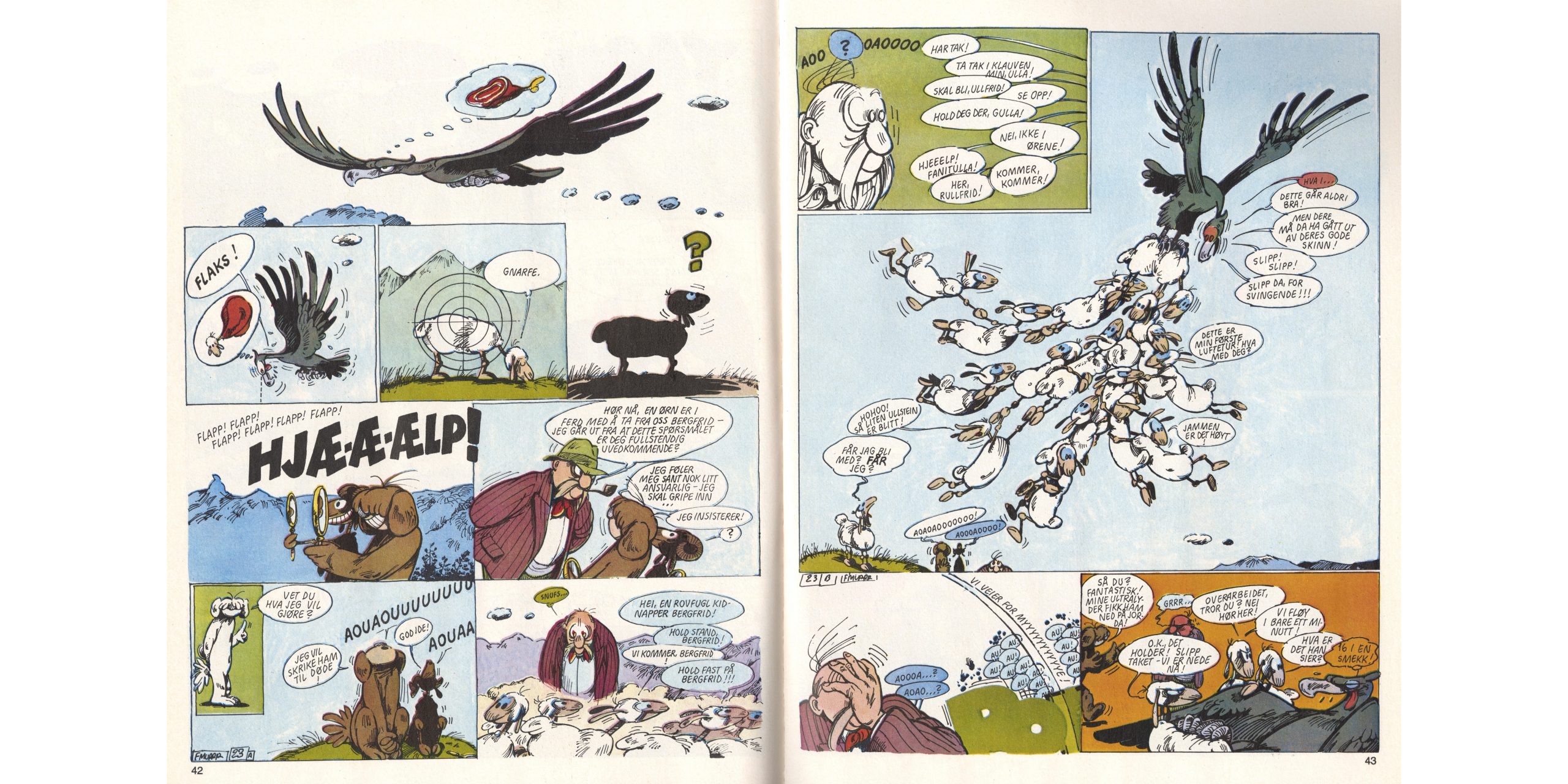 While there’s an impressive amount of nonsensical punning going on, it’s also a series that full of visual gags.

Oh, what’s it about? It’s about a flock of sheep in the alps who all have funny names and various personality quirks (one’s in love with an eagle, one’s an inventor, and so on) and their shepherd and his dog. Along with the ram, the latter two are supposed to be the authority figures in the herd, but they’ve mostly abdicated in the presence of all the lunacy. 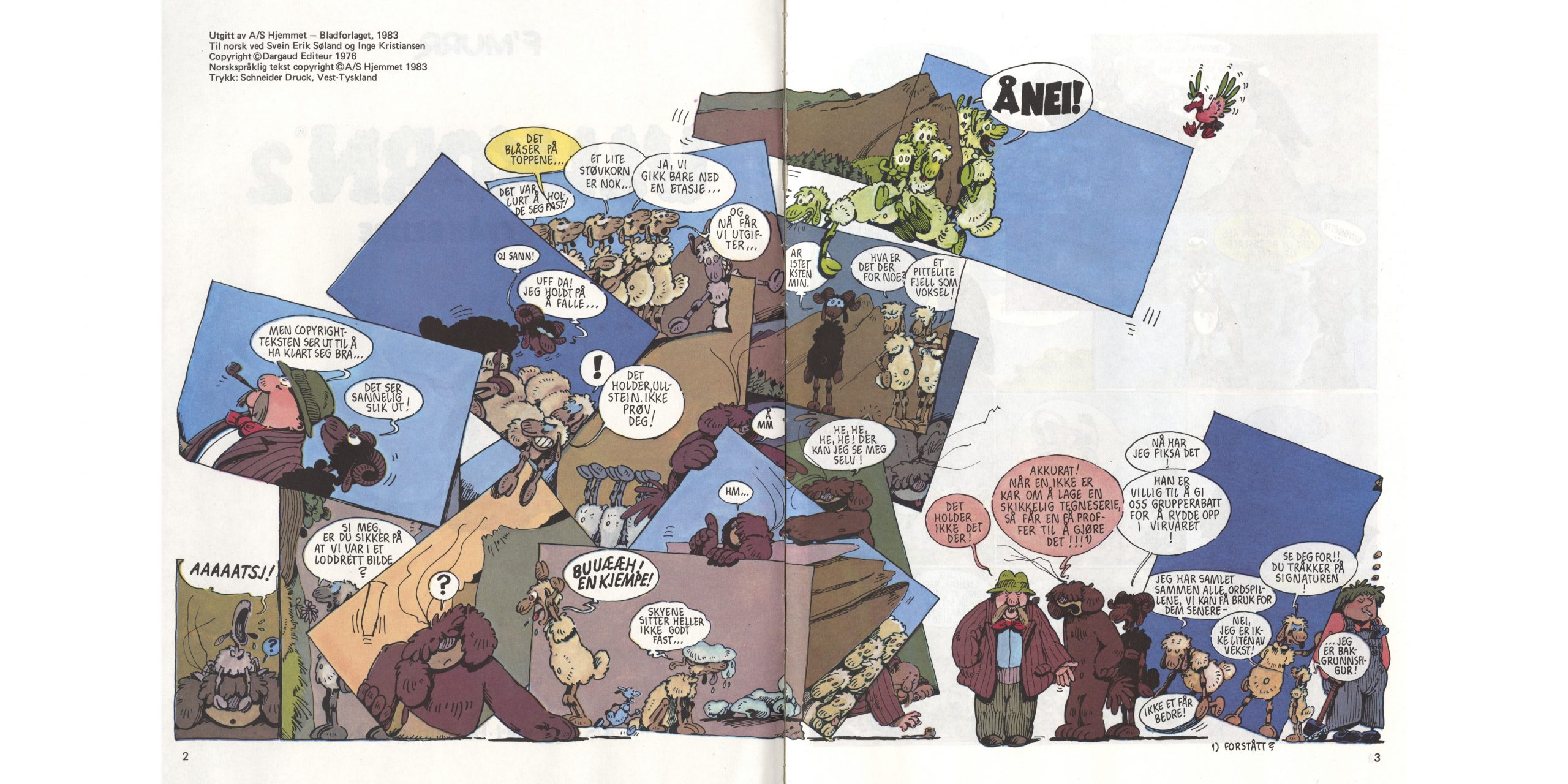 F’Murr loves to play with the construction of the comics themselves, like on this indicia page where the sheep complain about the unprofessionalism of whoever composed these rickety panels. 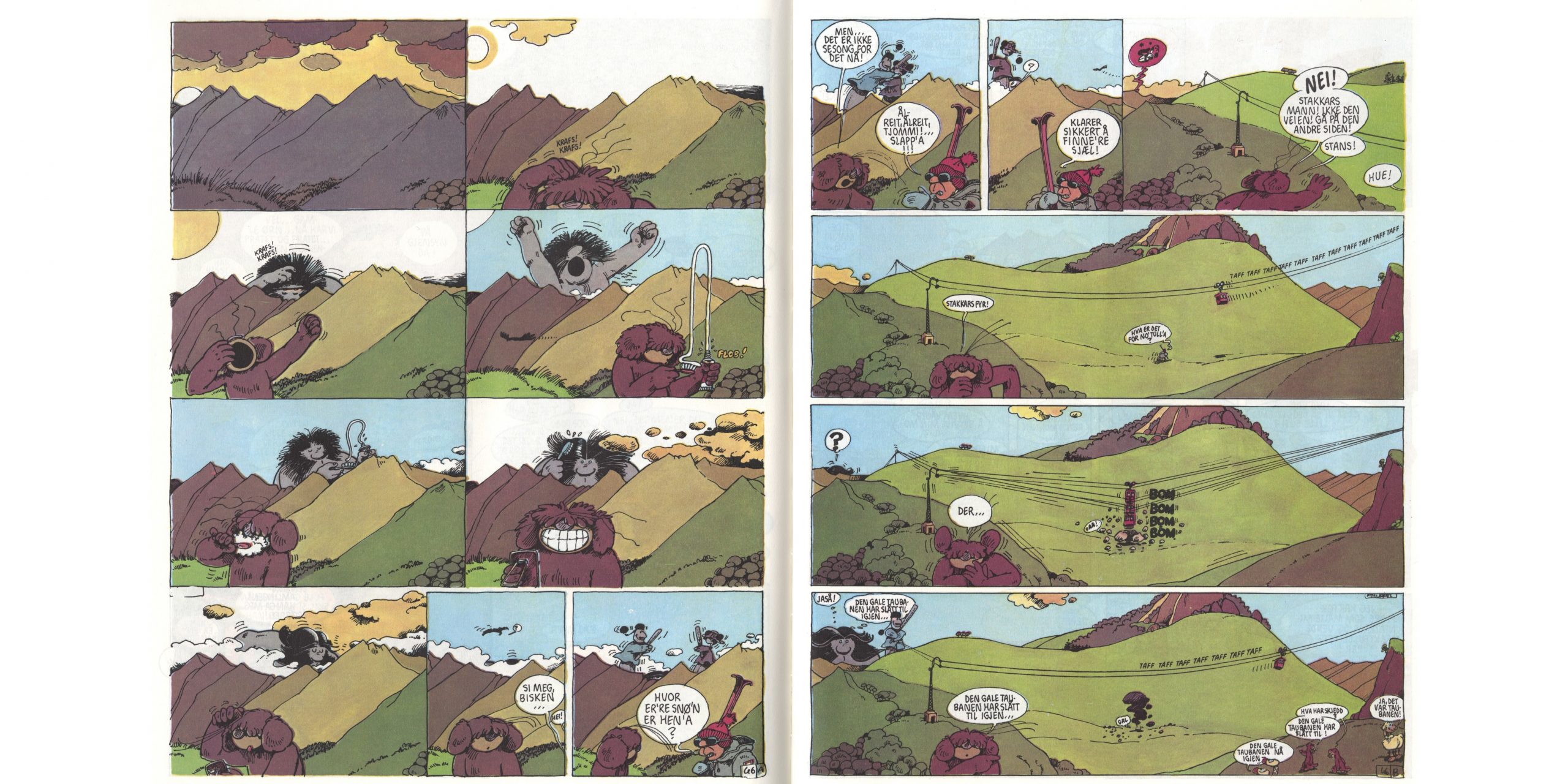 I’m not going to attempt to translate any of these strips, because… it’s too much work, but here’s a nice non-wordy strip. You have the rude tourist who wants to find snow (and there’s none to be found), and then… the murderous funicular kills him. There’s a high death toll in these strips, especially for the tourists.

The murderous funicular isn’t a recurring character in the series, and that’s typical of F’Murr. There are some recurring gags, but he’s impressively inventive: Use a gag once, and then never again. 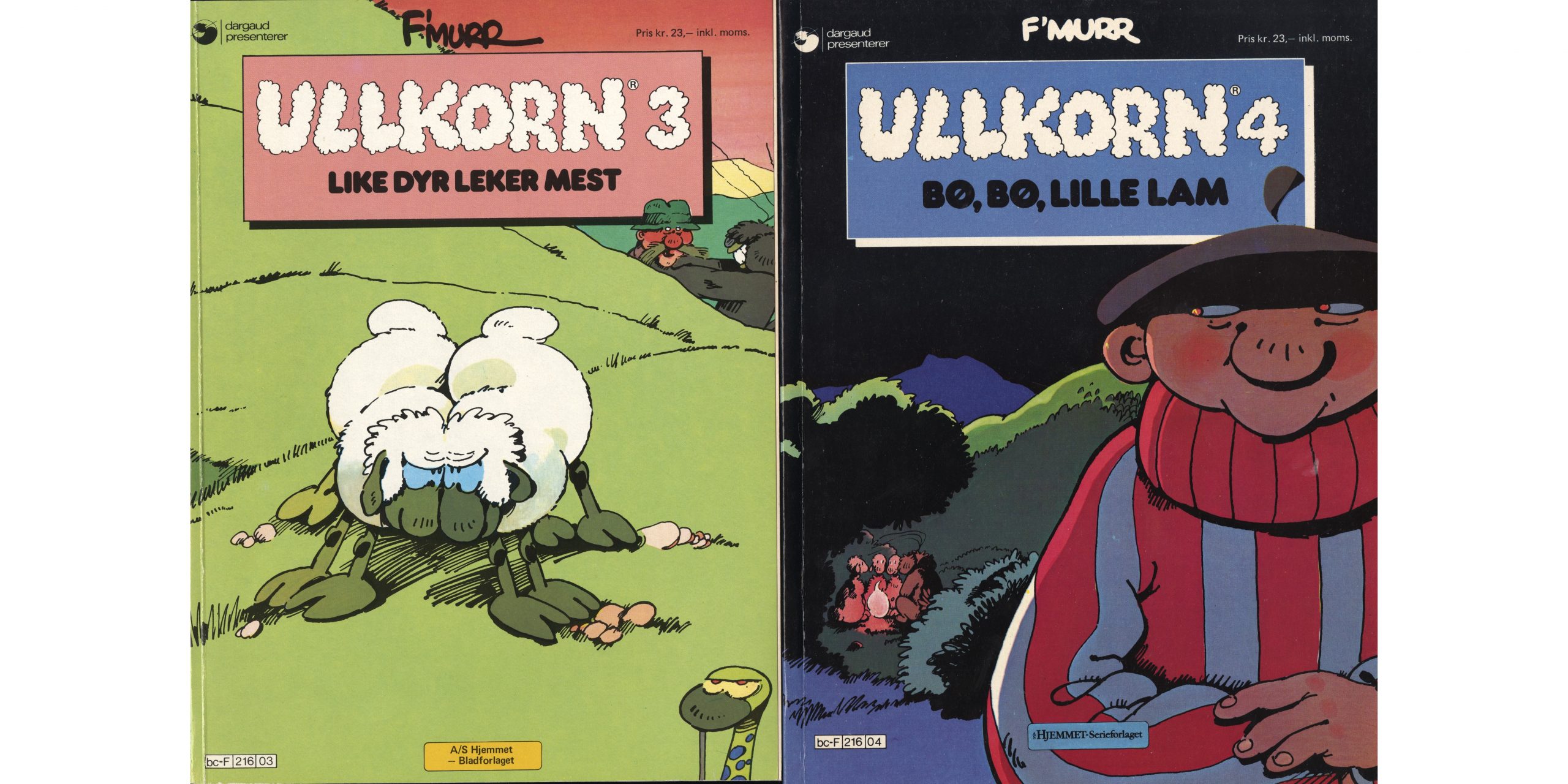 The Alpages “universe” is basically a steady state world. Cataclysmic things happen in every other strip, but things return to normal the next one. However, things subtly change over the years: We get a new shepherd, for instance, while the old one drops by from time to time and is reminded why he stopped showing up. 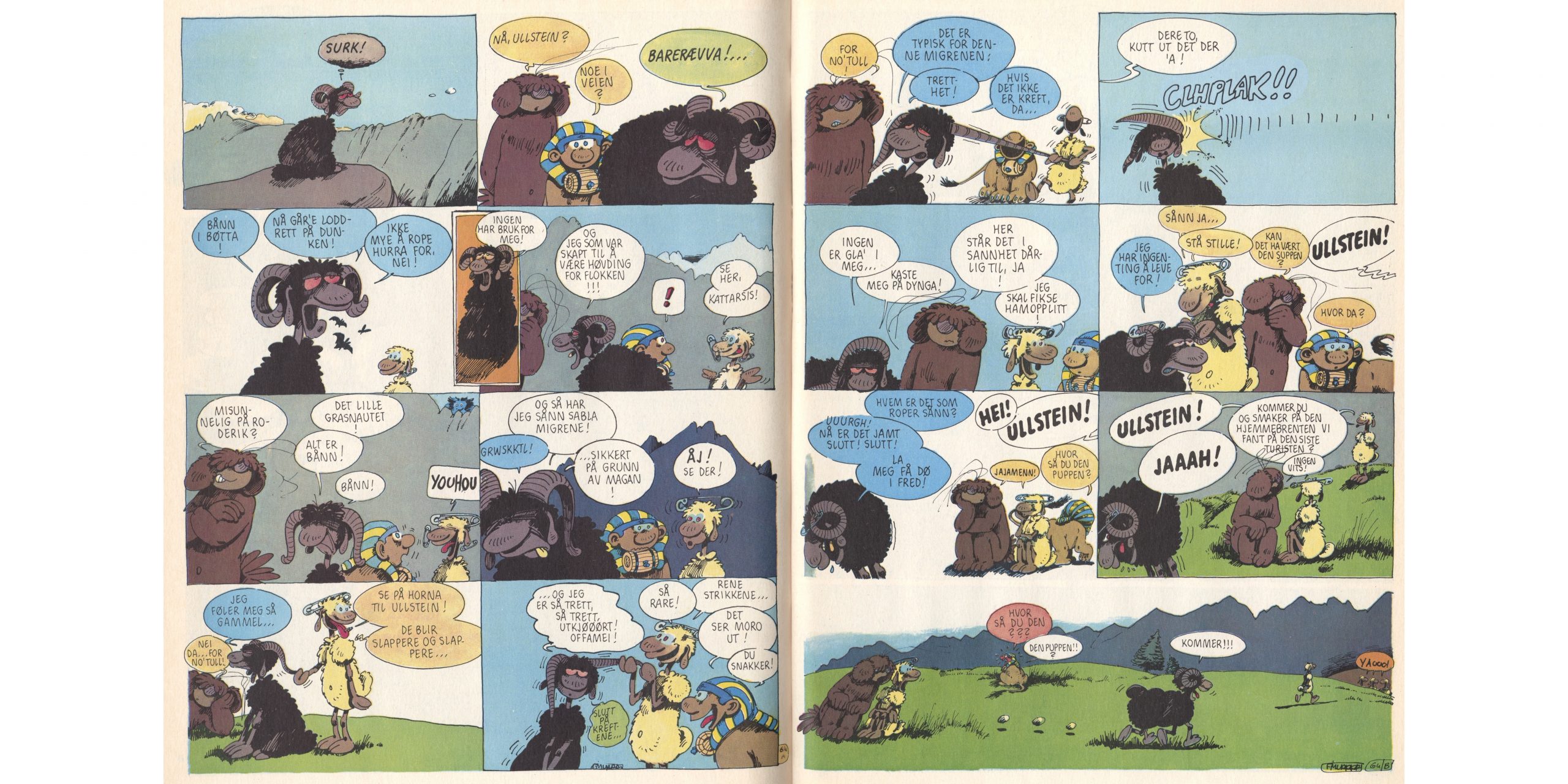 The series isn’t particularly topical, but here we see one of the sheep adorning herself with safety pins, which must be a reference to punk, which was starting around this time. (She tries to help the hung-over ram with the droopy horns.) 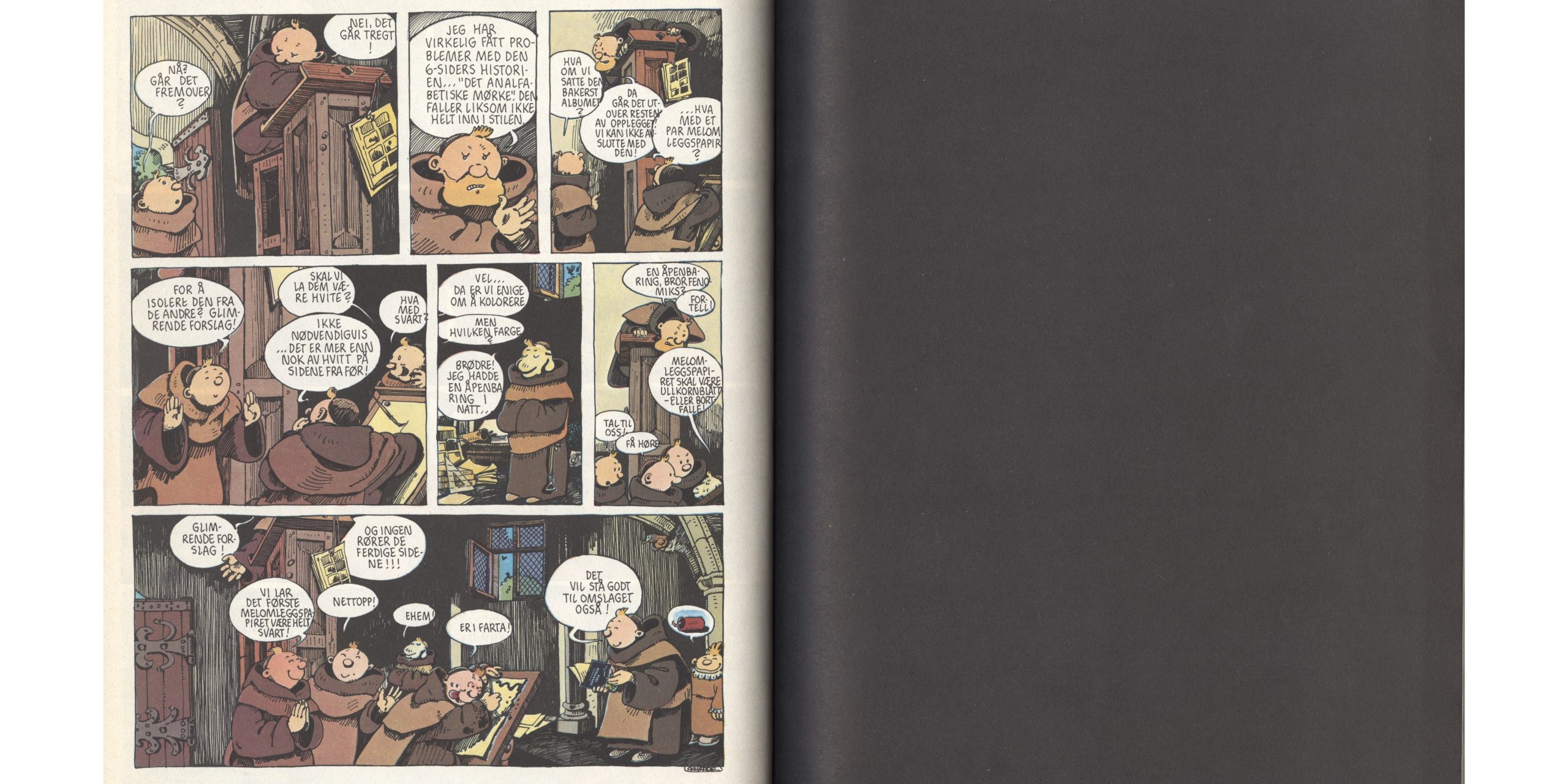 Around this time, F’Murr started doing longer strips, too: Mostly in the six to ten page range. For one of the first one, we get an introduction from these very Tintin-looking monks (who are apparently readying the book for publication) and they discuss how they’re going to feature the next, longer piece in the album without disturbing the rhythm. They decide on an all-black interstitial page. 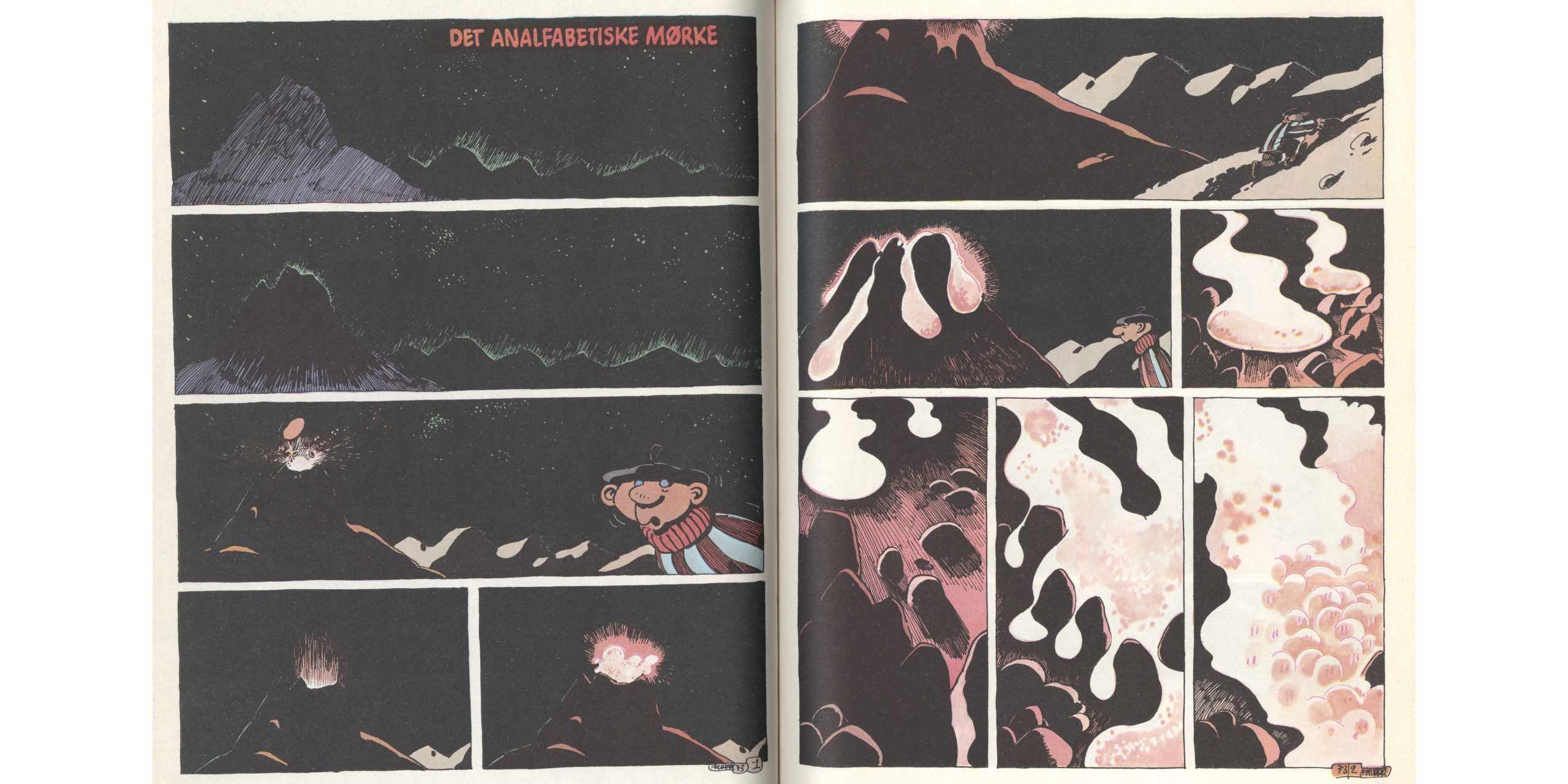 The piece introduced this way, er “The analphabet darkness”, is possibly a parody of the metaphysical sci-fi comics becoming popular in France at the time. Or perhaps F’Murr just wanted to draw a volcano. Who can say? 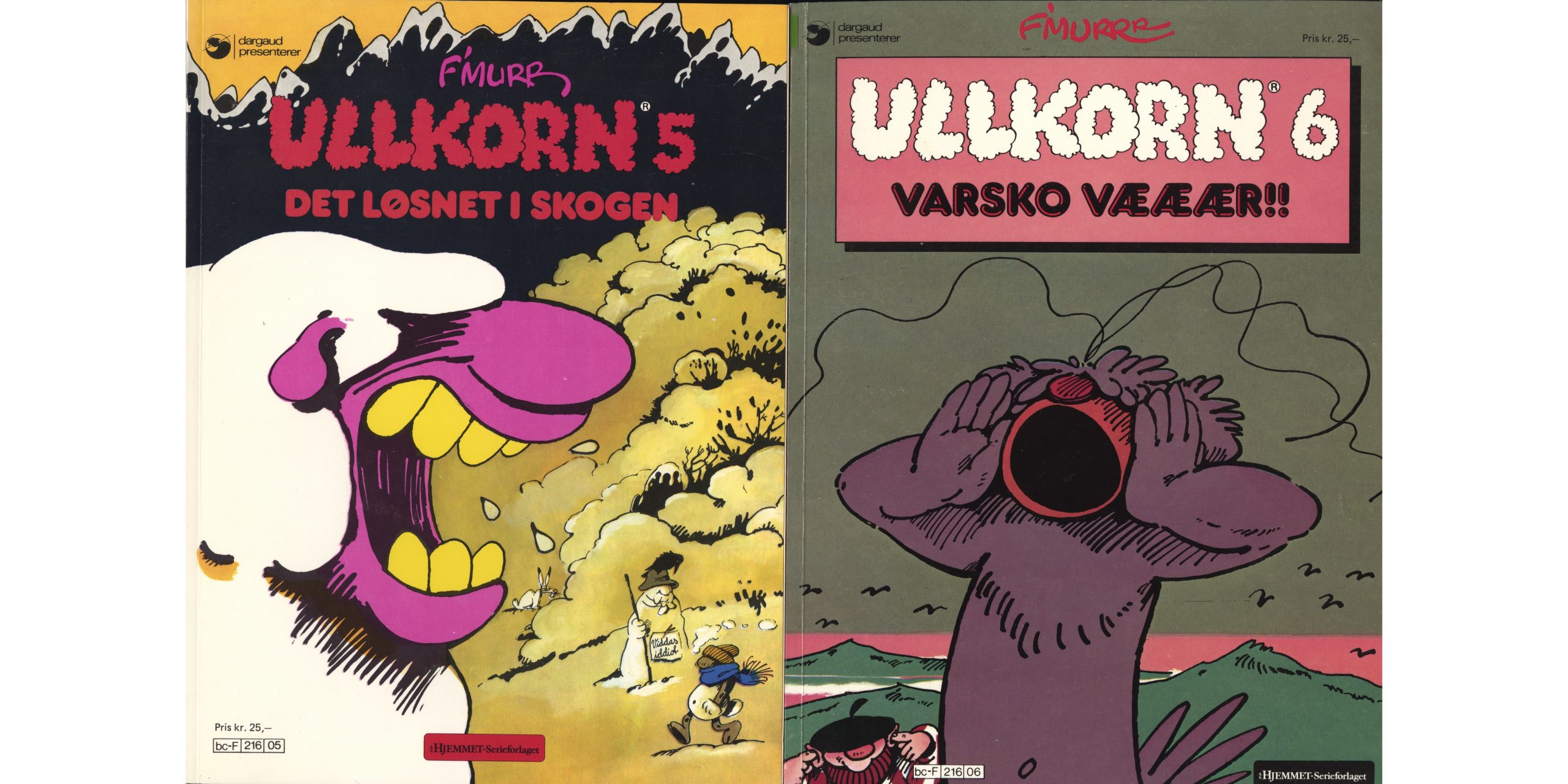 The artwork also develops over the year. It becomes more detailed and consistent, I think…

And there are also atypical panels like this (which is about the sheep owners trying to suppress the a sheep uprising (the sheep want control over the means of production (yes, this is the early 80s))). 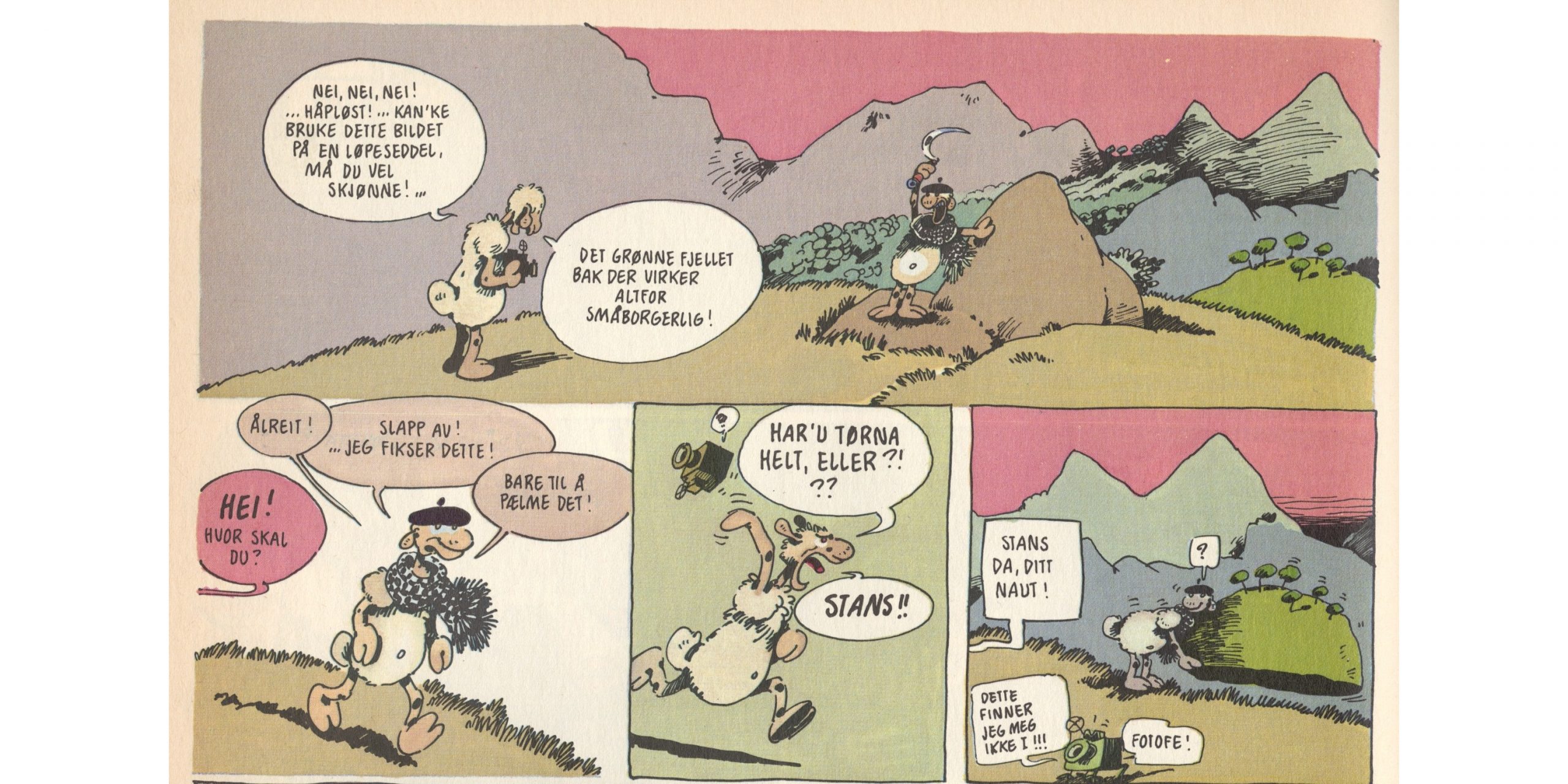 The strips become even more meta, which many a strip dealing with the sheep rearranging the scenery. Perspective is fun.

The series sometimes references Groucho Marx directly, and the humour certainly tends toward the Marxist, but it also has a Krazy Kat vibe going on with the scenery. 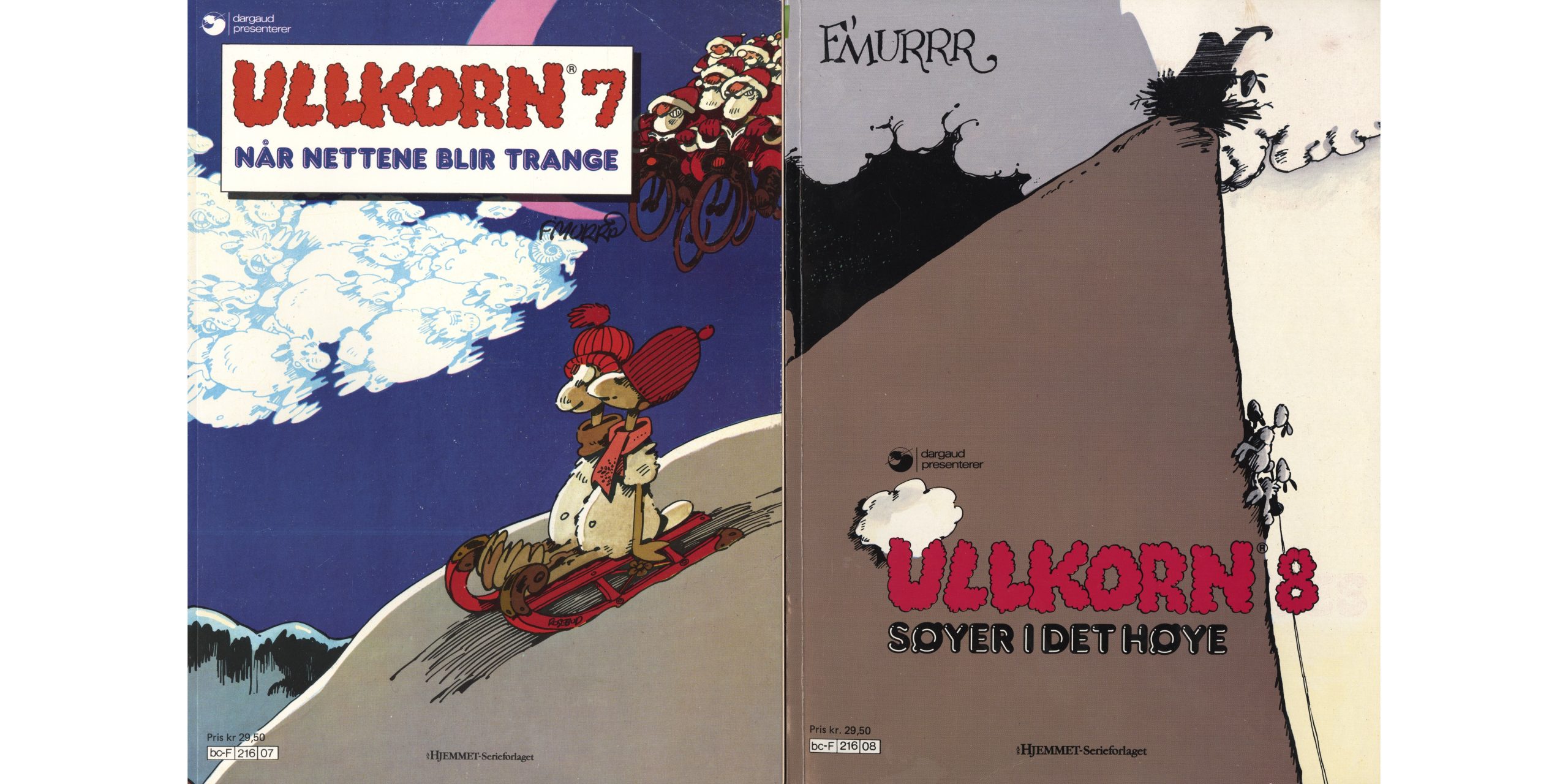 By the late 80s, many of the quirkiest bits have receded. In the early years, you might have five different gags happening at once across a two-page story, but the well of ideas seems to have gotten a bit drier as the years pass. 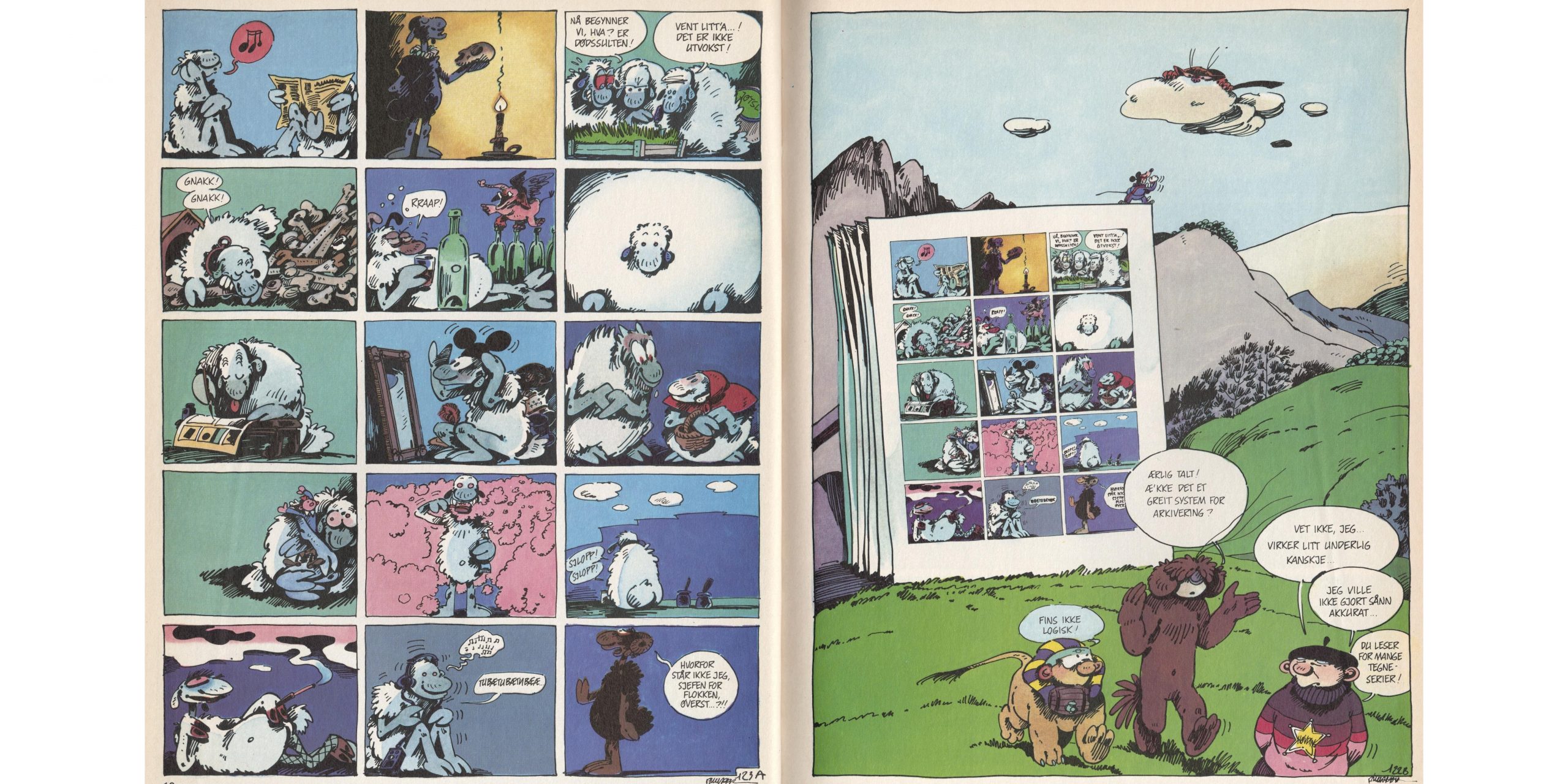 But there’s always new twists to how the gags unfold. 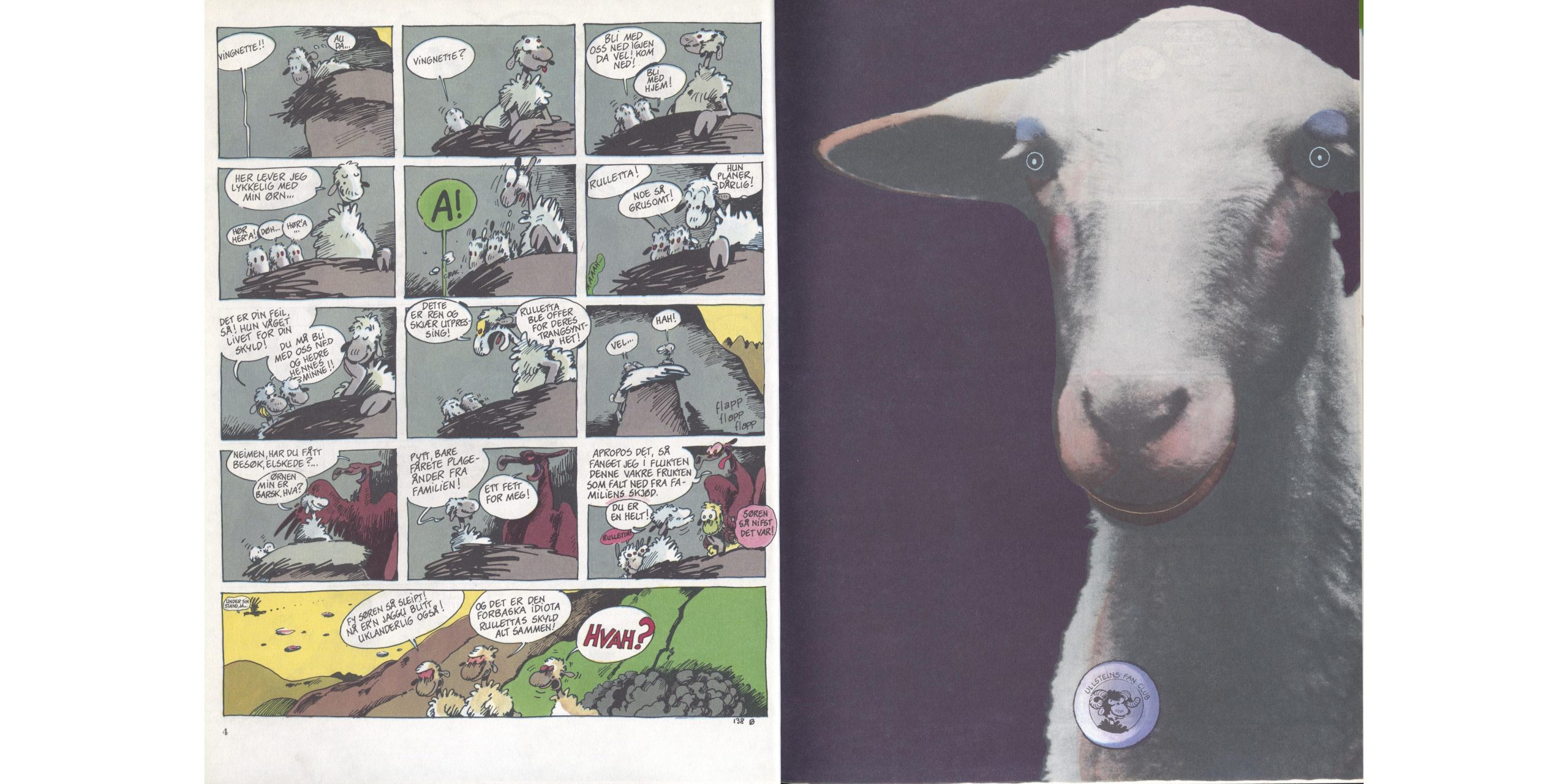 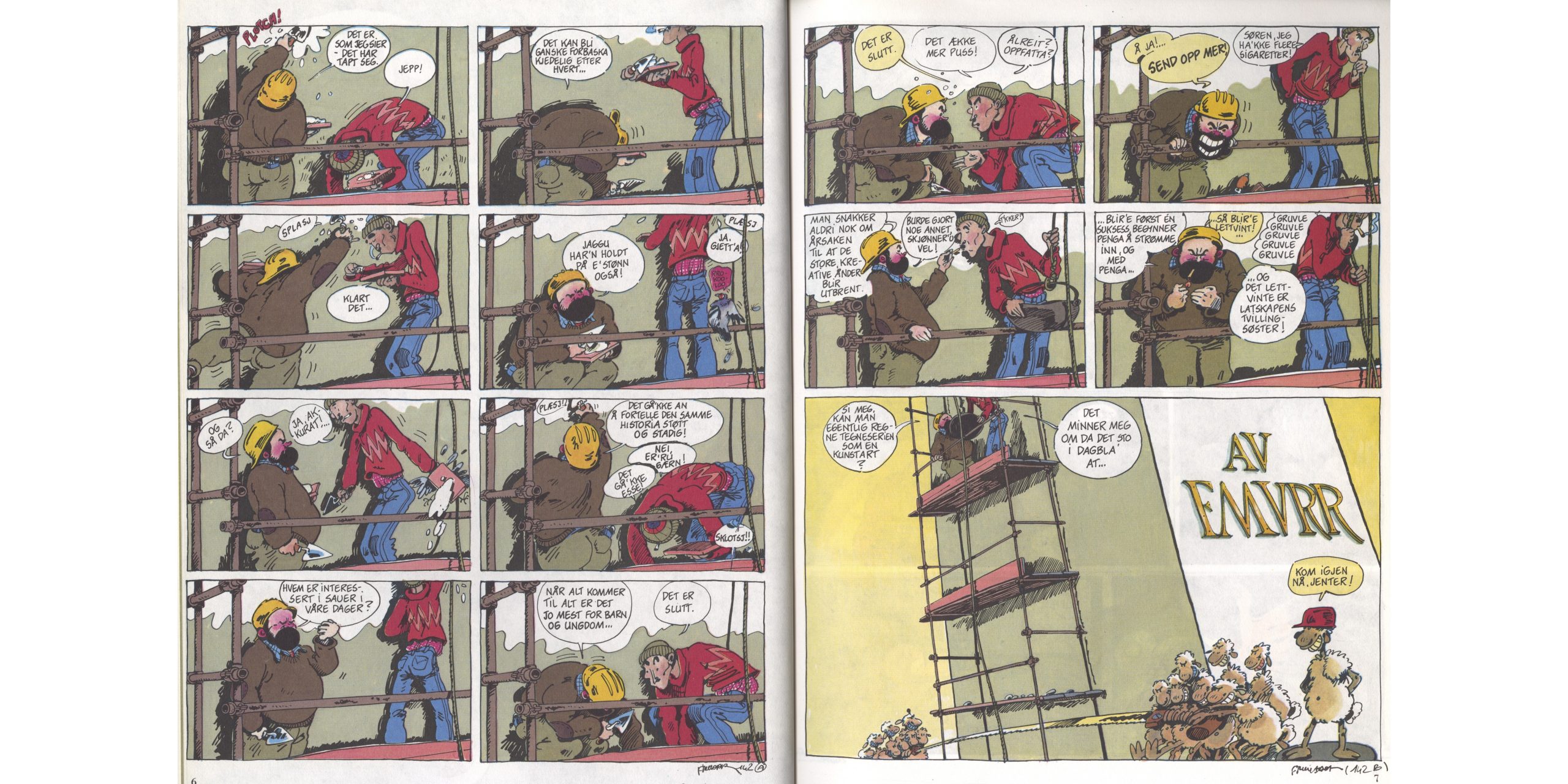 When the final album translated to Norwegian appeared, you start getting some of those normal gags about not having an idea for a gag. The two workers putting up the scaffolding here complain about things having gotten more boring lately, but “he’s been doing this for a while”. “Who’s interested in sheep these days?” 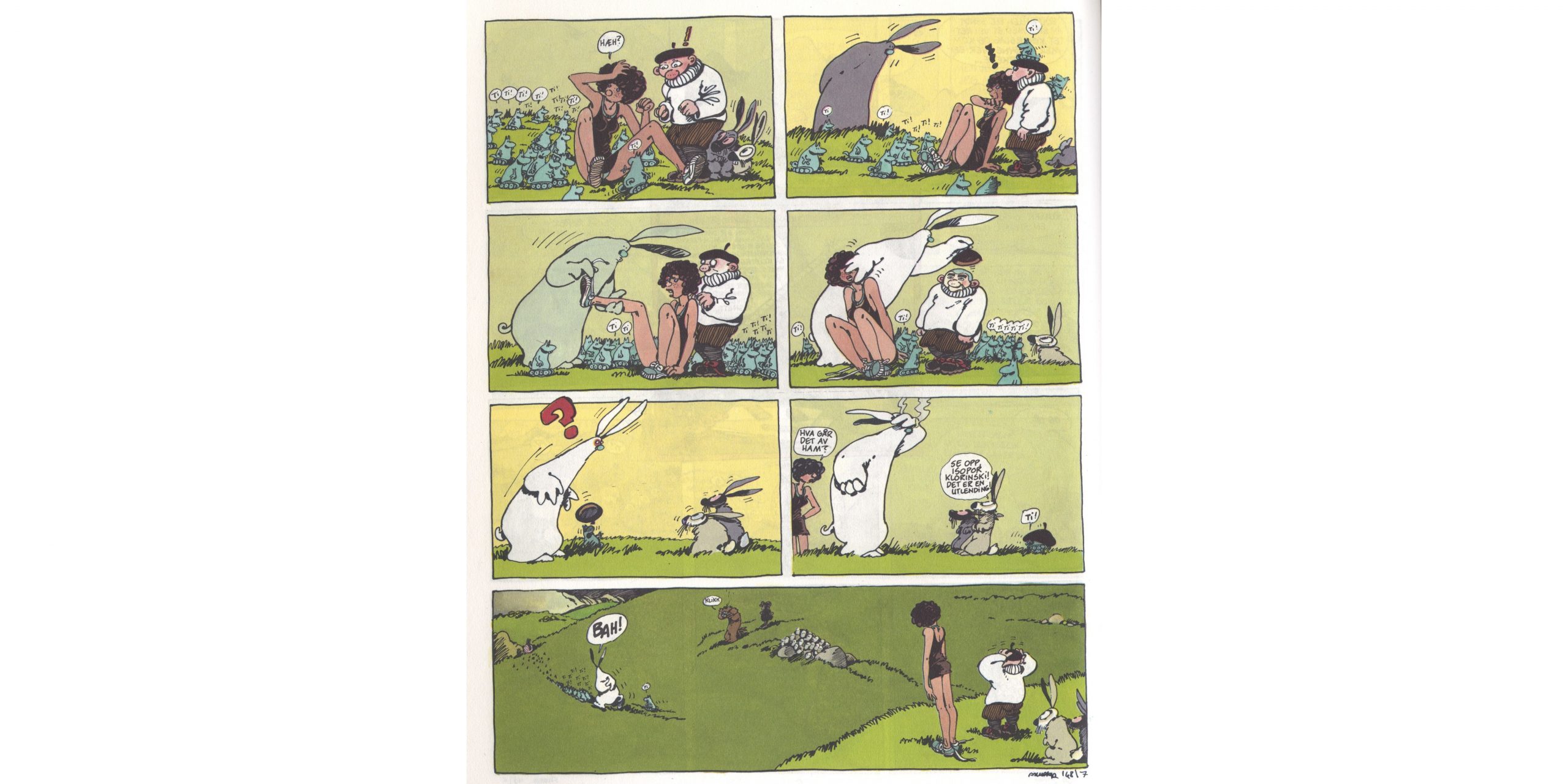 Still, the weirdness keeps on going.

And this is the final panel, and I wondered whether perhaps F’Murr meant this cliffhanger as an ending of sorts, but nope. Seven more albums have been published after this, the last one in 2007.

This is a very strange series, and I’m surprised that the Norwegian publishers managed to get eight volumes published. The Danes only got three done before they had to give up. And that’s unusual, because Denmark is (and had) a bigger comics audience than Norway. Perhaps it was a labour of love for the Norwegian translators (who remained the same people throughout the years) and editors?

I don’t know. Perhaps it was a runaway hit in Norway? This was all before the Intertubes, so I guess we’ll just never know.

F’Murr has also done a large number of non-sheep-related comics in France. Only one has been translated into a language I can read, and from that one I can guess that the reason might be that he’s just hard to translate. There’s a lot of French references, and lots of word play. Anybody taking this on has a bit of a task ahead of them.