I’ve been going on a small press shopping spree these past weeks.

So are the comics any good?

I have a tendency to read the smaller comics first. Here’s some of the ones I found to be particularly interesting from among the stacks I’ve gotten so far: 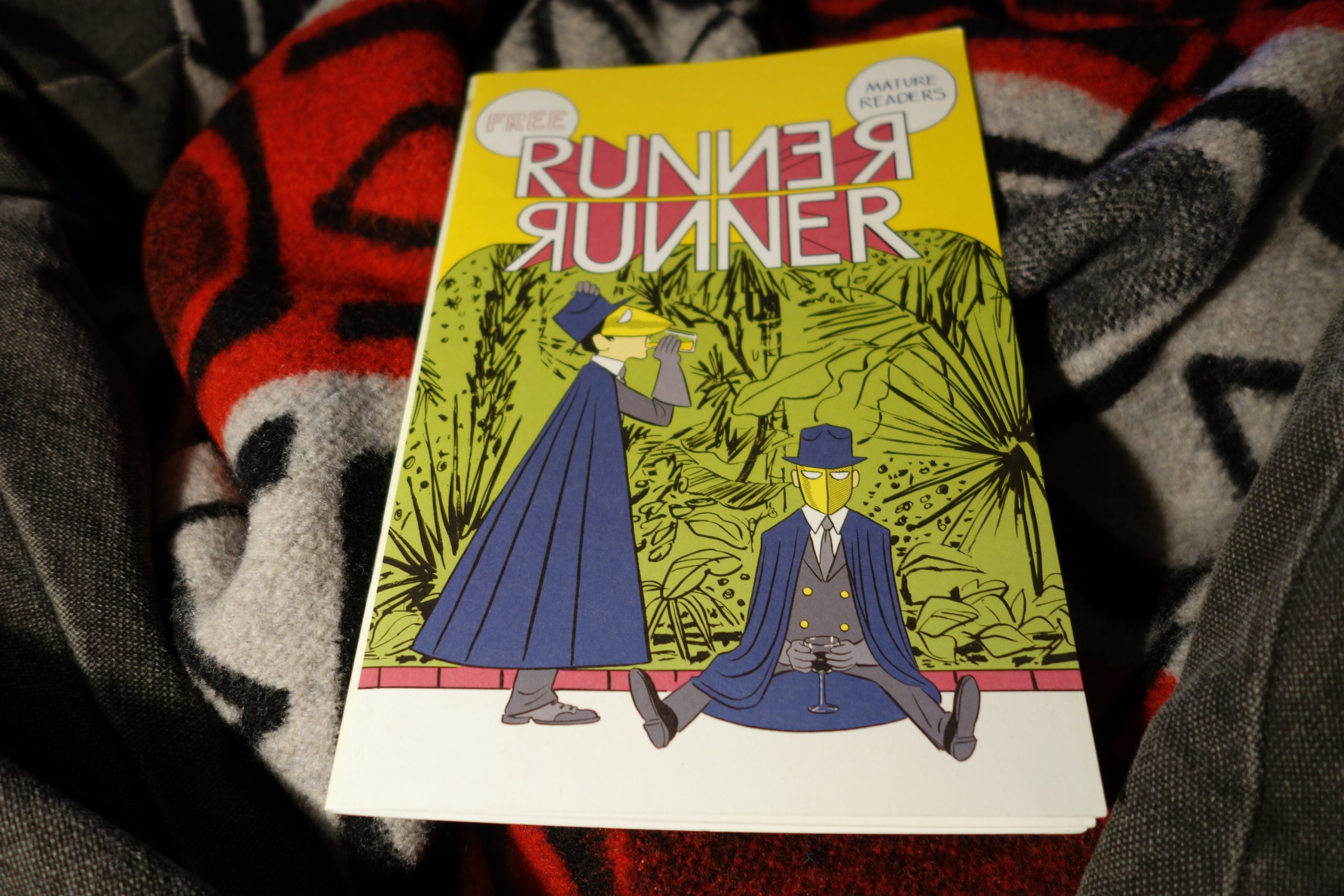 The first story in this anthology is by Sam Sharpe, and it’s really engrossing. 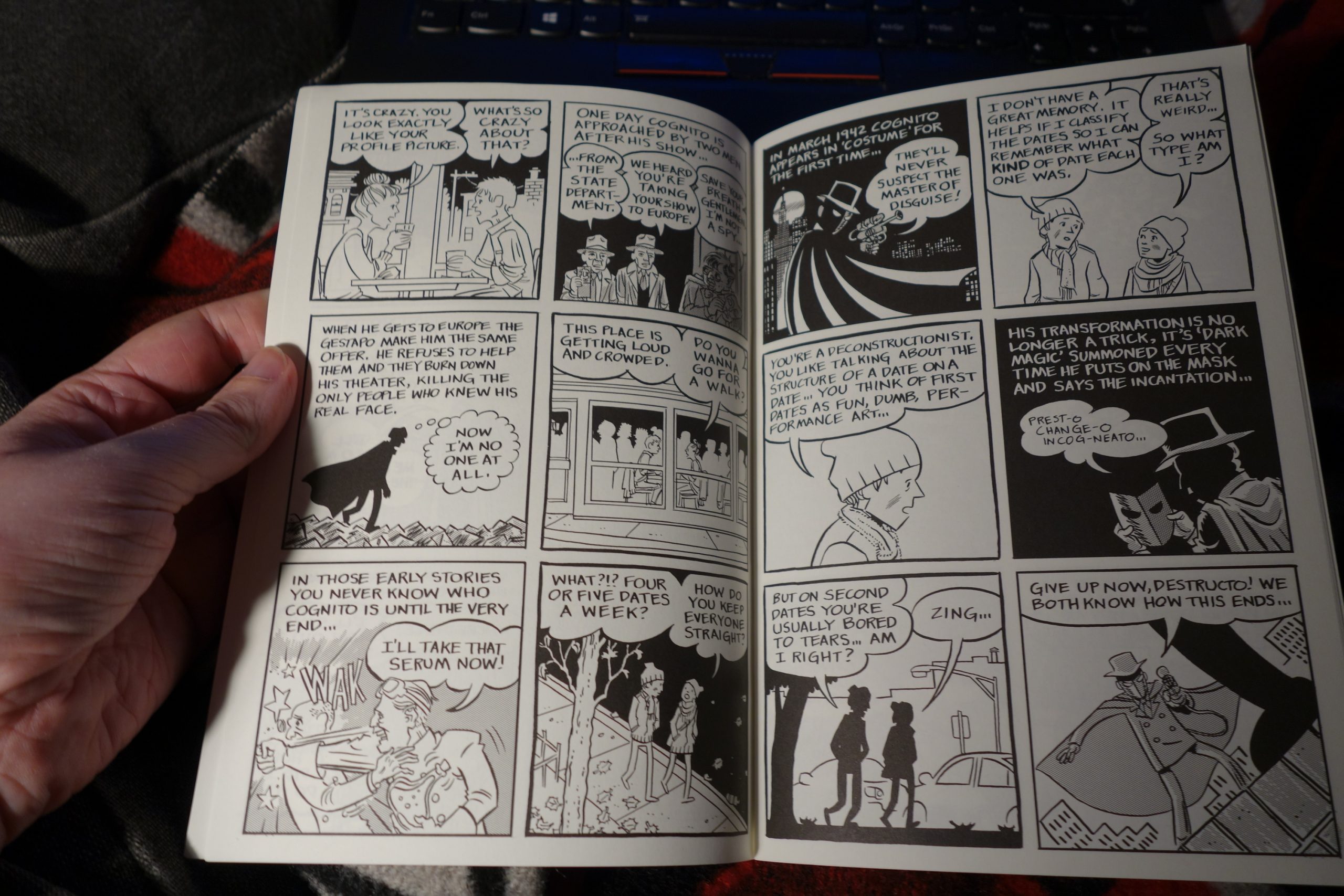 It tells the story of a super hero comic from the 40s interspersed with a tale of blind dates. (I know.) It plays with identity in a way that’s unnerving. It has that Pynchon-like feel of encoded meaning. It’s super. 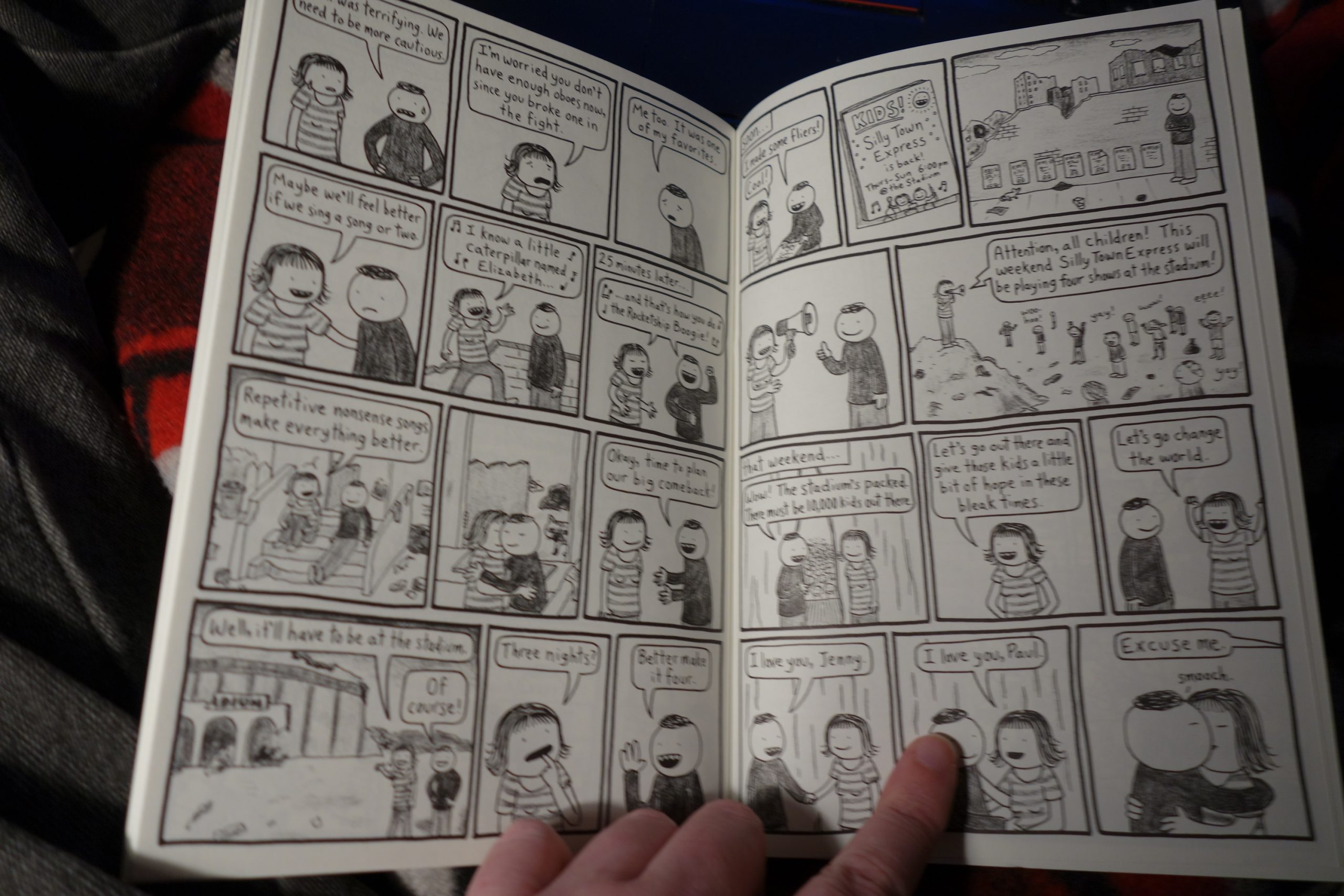 The other two stories, by Evan Palmer and Joey Alison Sayers are also kinda spooky. A three-pack of spookiness. Very nice. 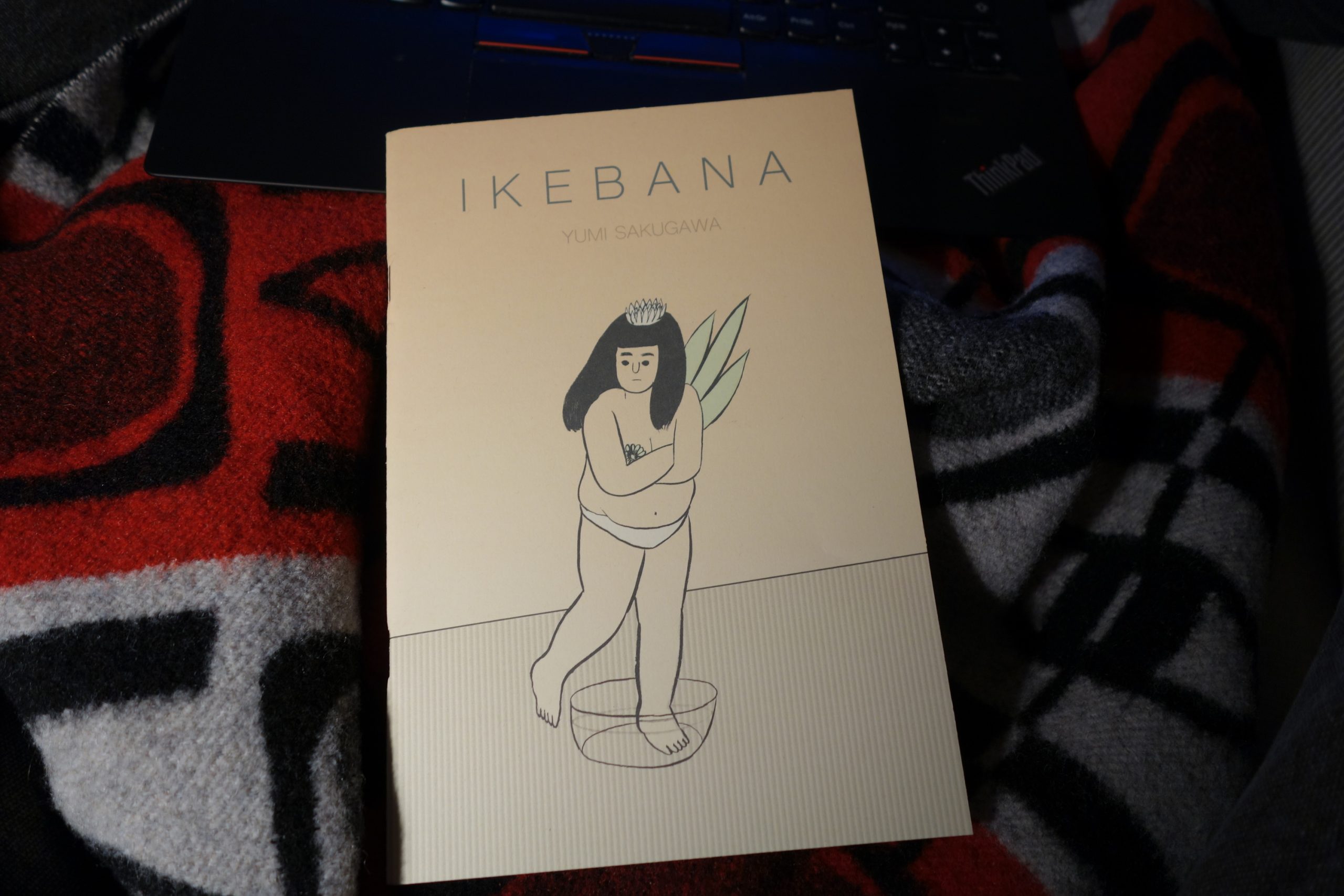 It’s both a funny send-up of art school and a moving, mysterious tale. Like with Runner Runner, it’s also a bit unnerving. Like the characters in the story, we’re not quite sure what the piece is really getting at.

I love mysteriousness and confusion.

The Libertarian by Nick Maandag 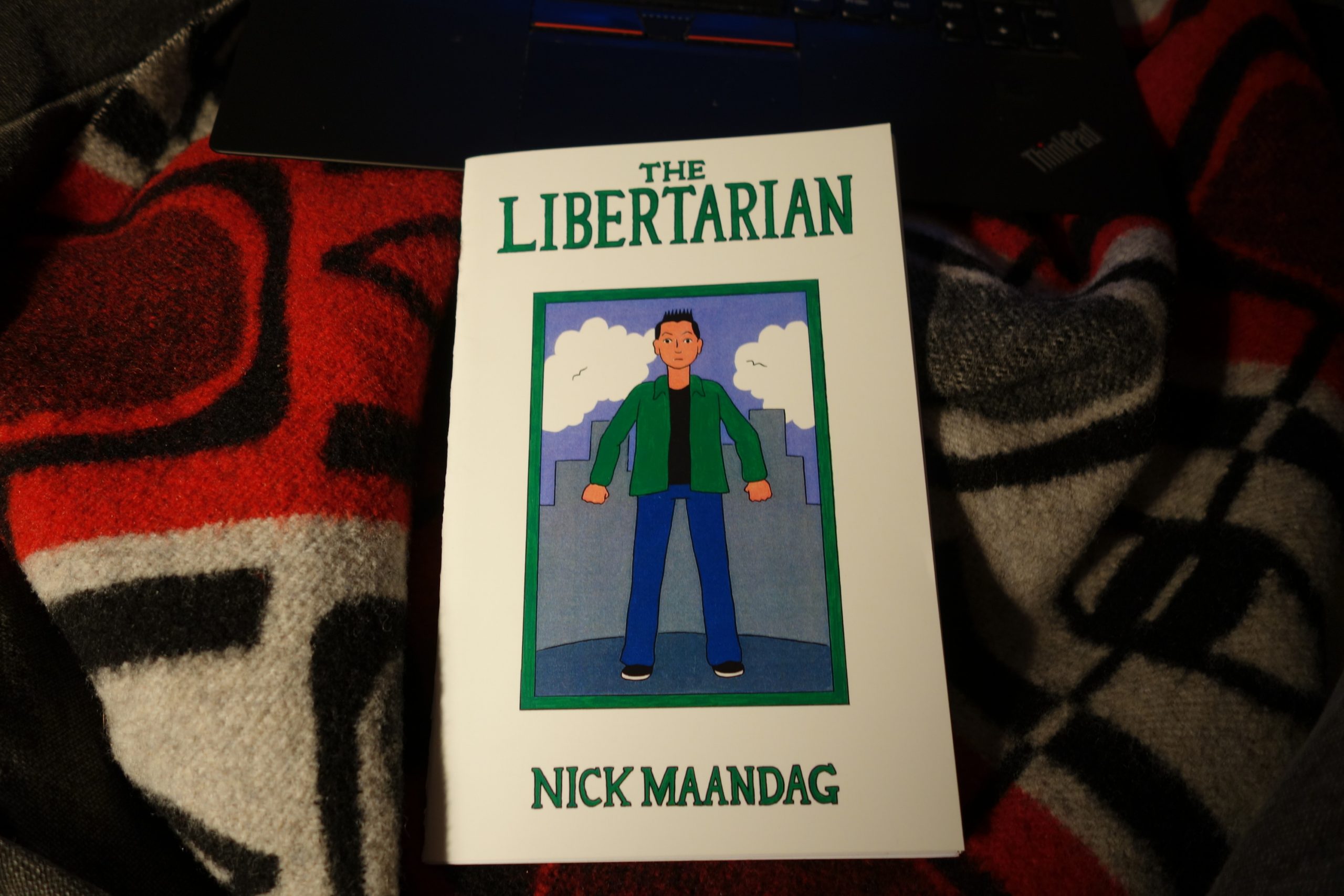 There’s nothing mysterious about this one, but it’s really funny. Storyline: A libertarian has to pretend to be a vegan socialist feminist to win over his current crush. 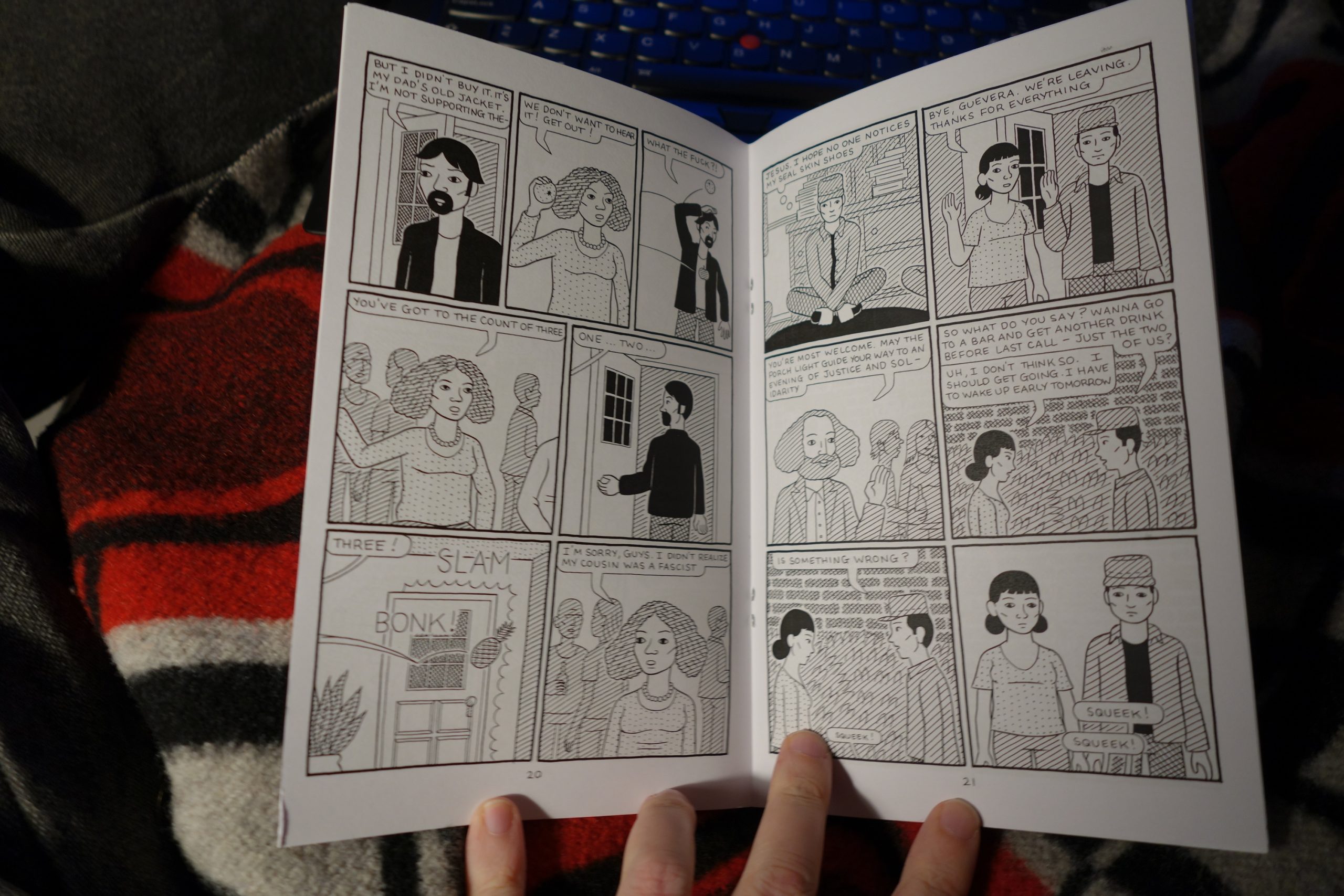 Things go as you would expect, only more so. The stiffness of the drawing helps making things even funnier.

You Don’t Get There From Here #27 by Carrie McNinch 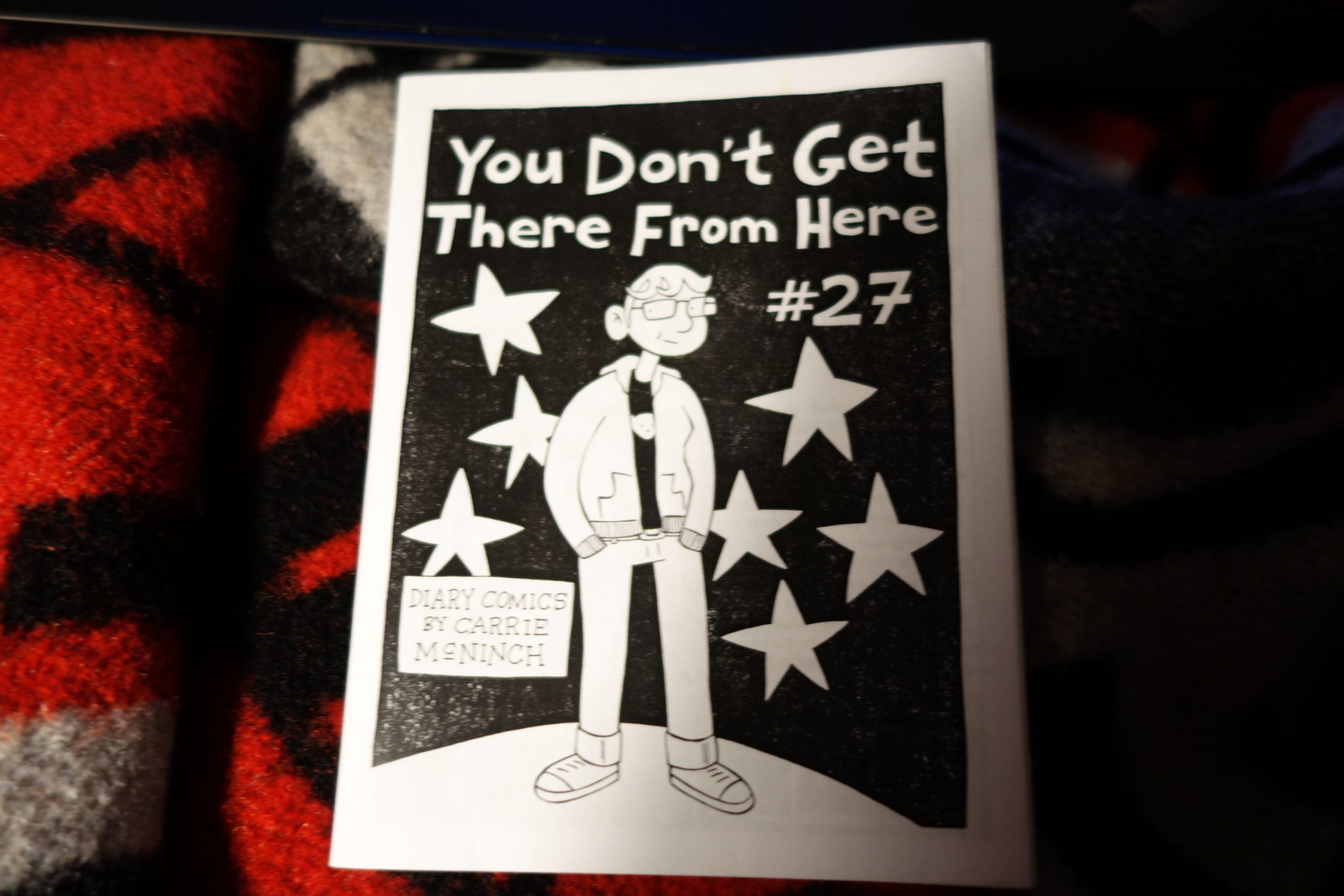 Nothing spooky here either, and not as funny. These are diary comics at their most diary comicness. This is not James Kochalka. He would draw funny nonsensicalness on days where nothing he thought was interesting happened. 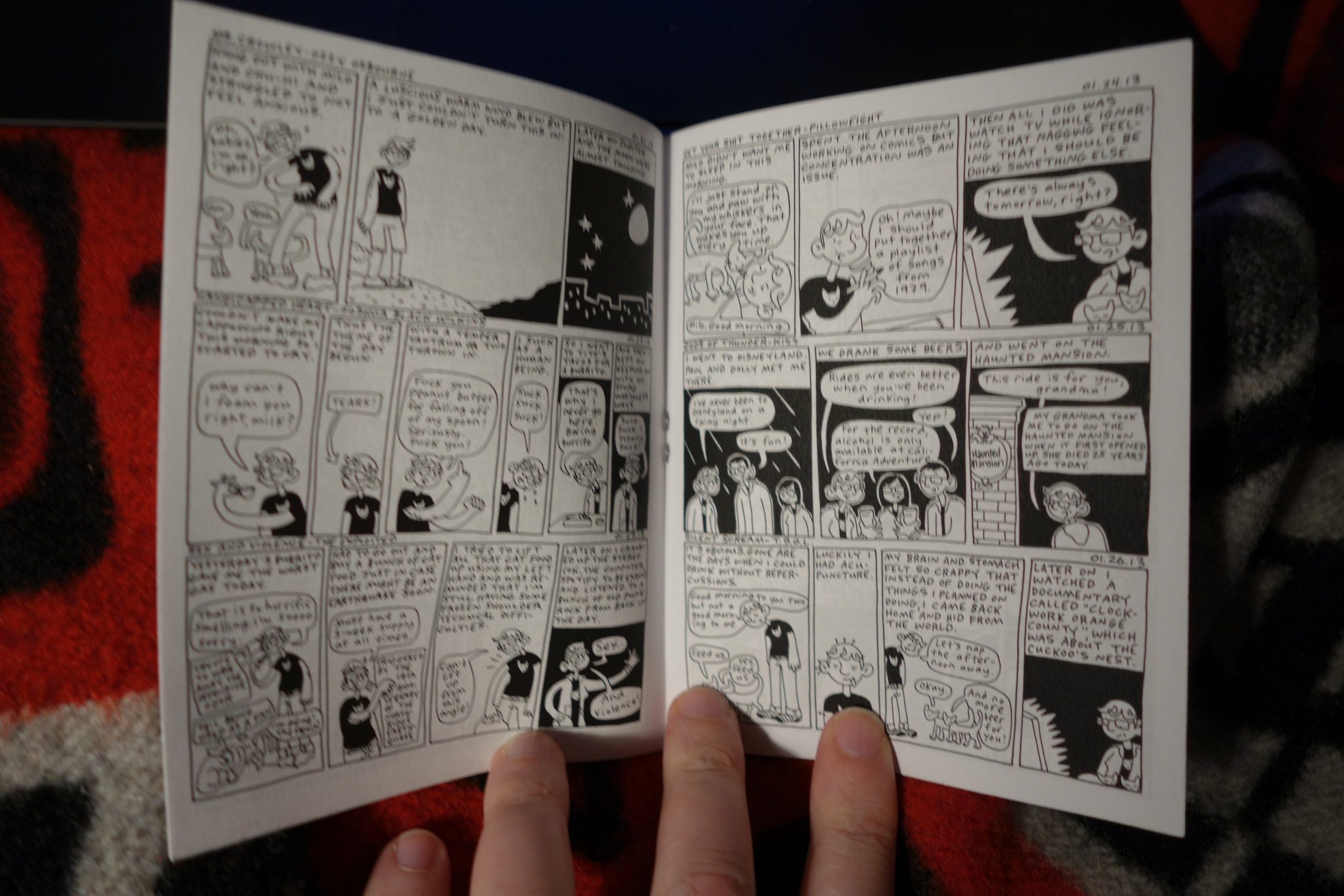 Even so, I found myself reading the strips avidly. The charming art work doesn’t hurt, but I just found the whole thing… soothing.

I went off and ordered issues 1-10 right away. 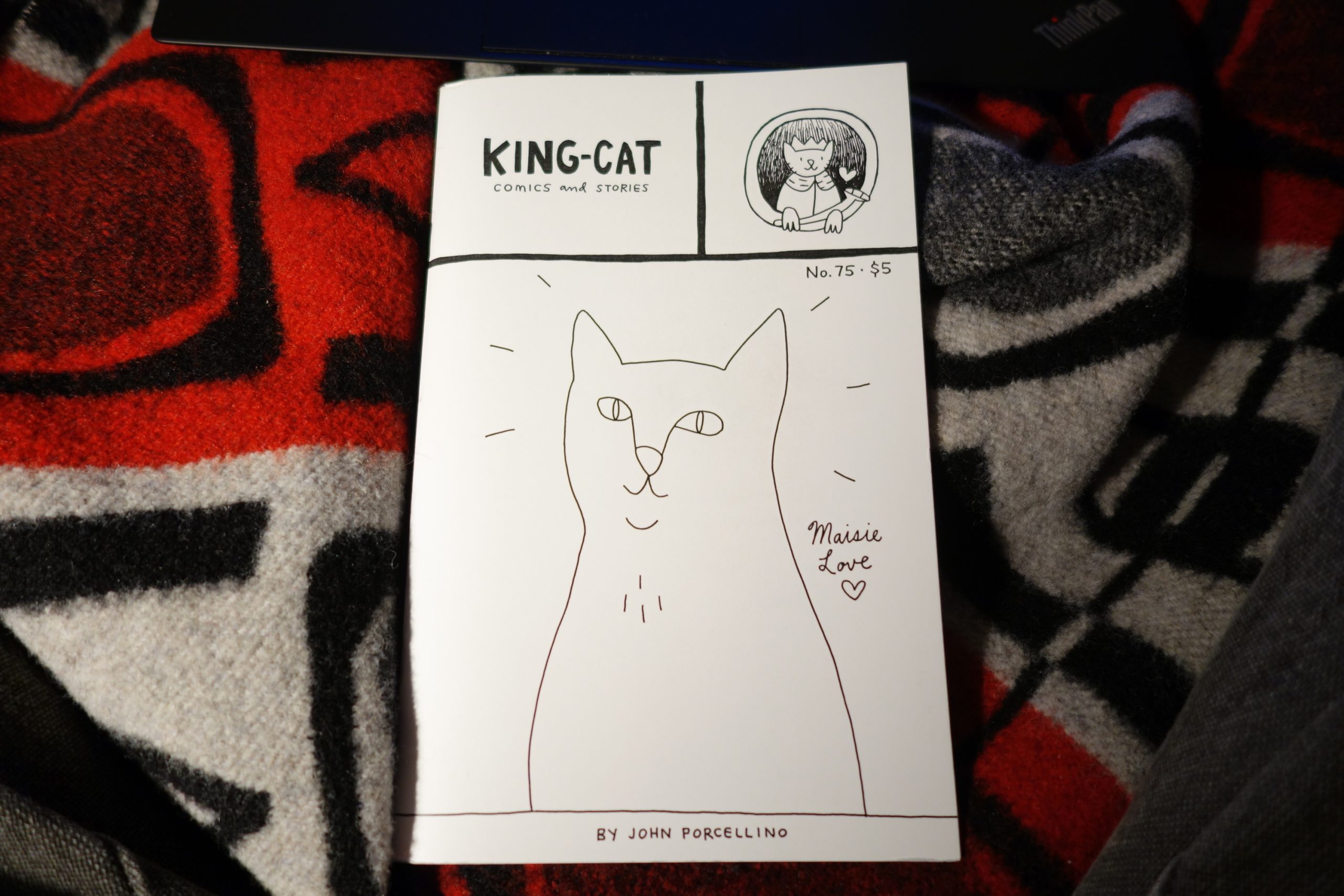 Well, duh. Everybody loves King-Cat, so how interesting can that be? 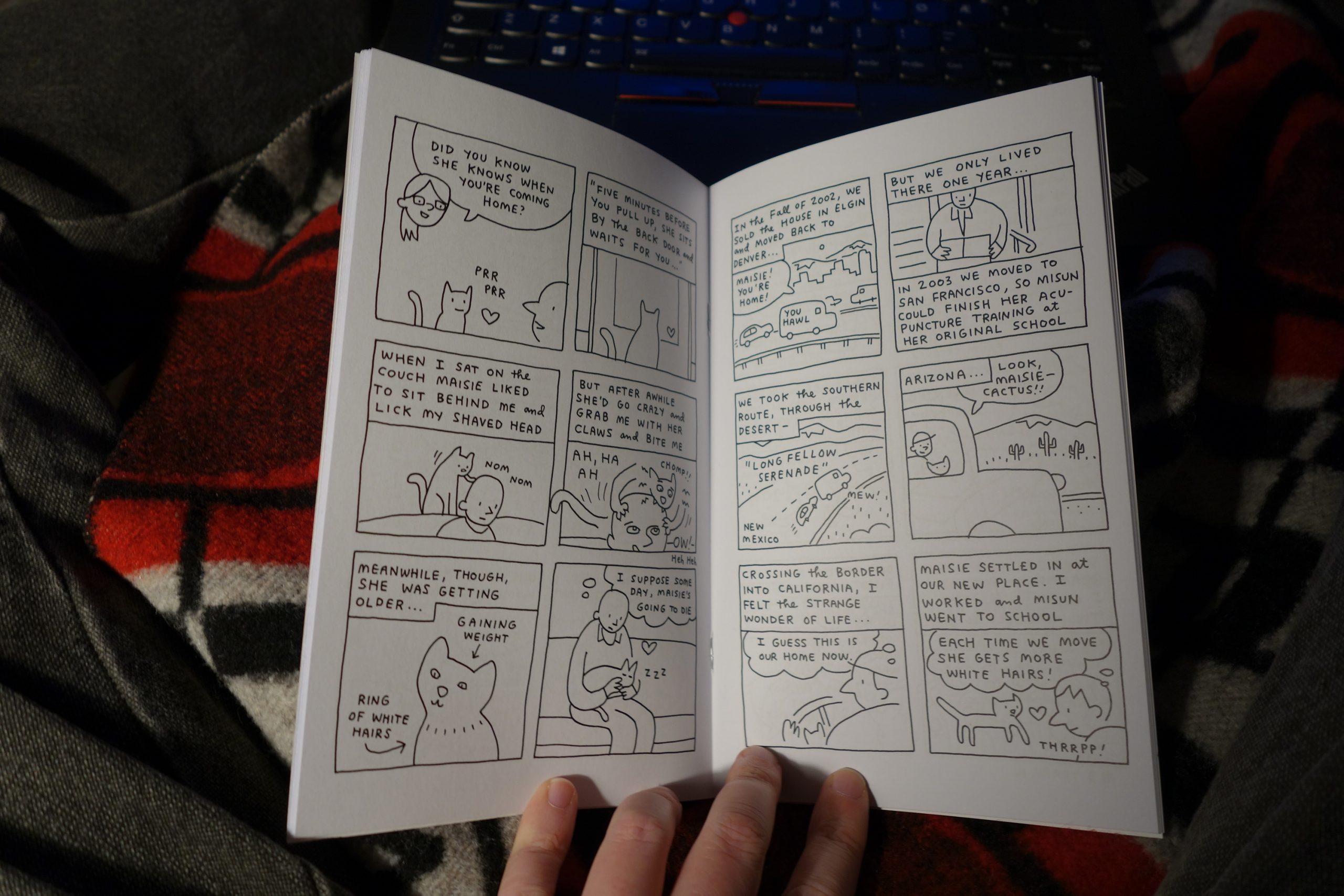 This issue focusses completely on the cat, Maisie, from when Porcellino got her to when she died. I have to admit a cried a bit at the end there. (Well, I don’t have to. But I did anyway.) And there are funny bits in there, too.

And I just love Porcellino’s artwork. So simple, clear and attractive lines. 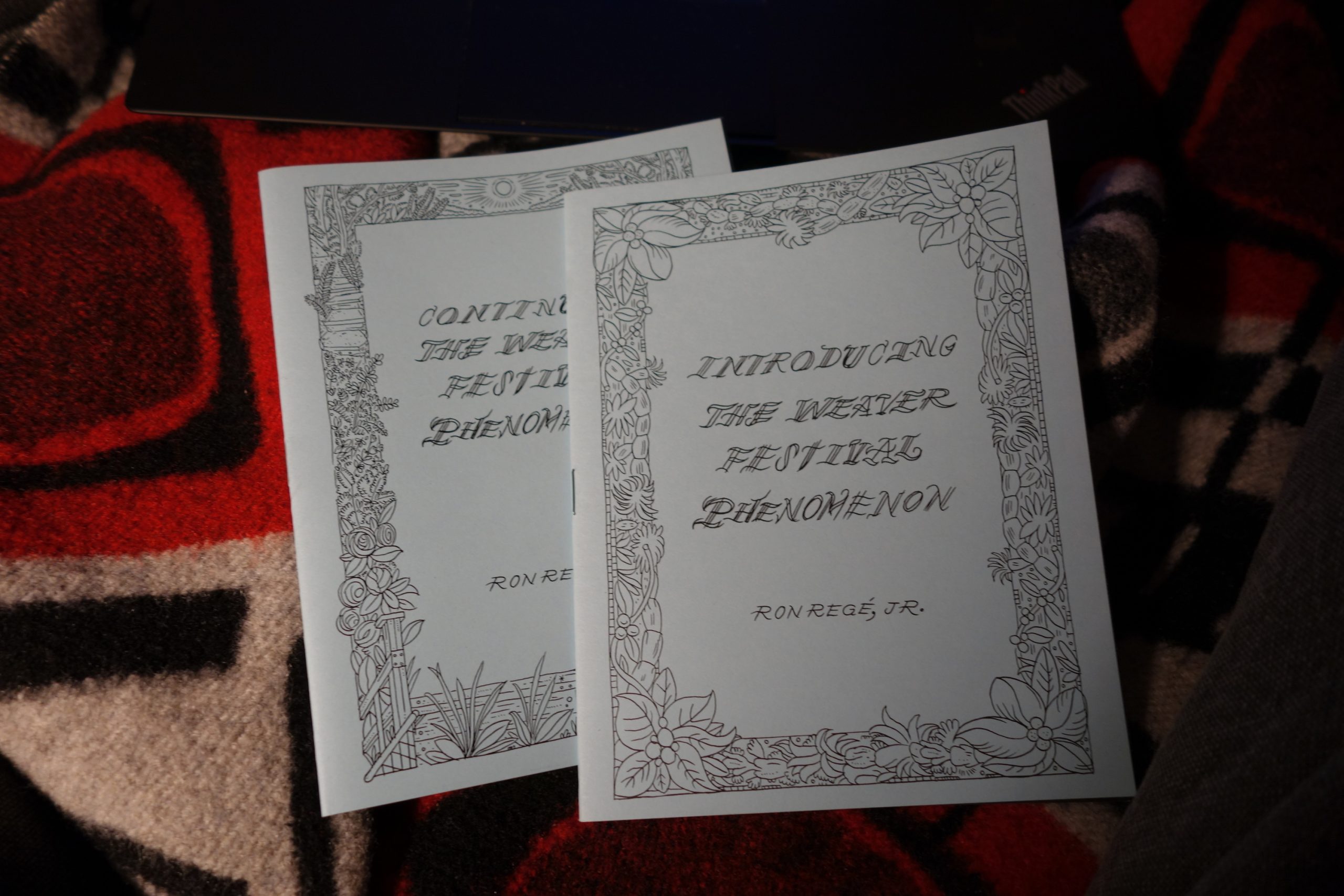 While I do enjoy Regé’s more straight-up philosophical comics, I just adore his narrative work. The tension between the story and the ecstatic art is just wonderful. 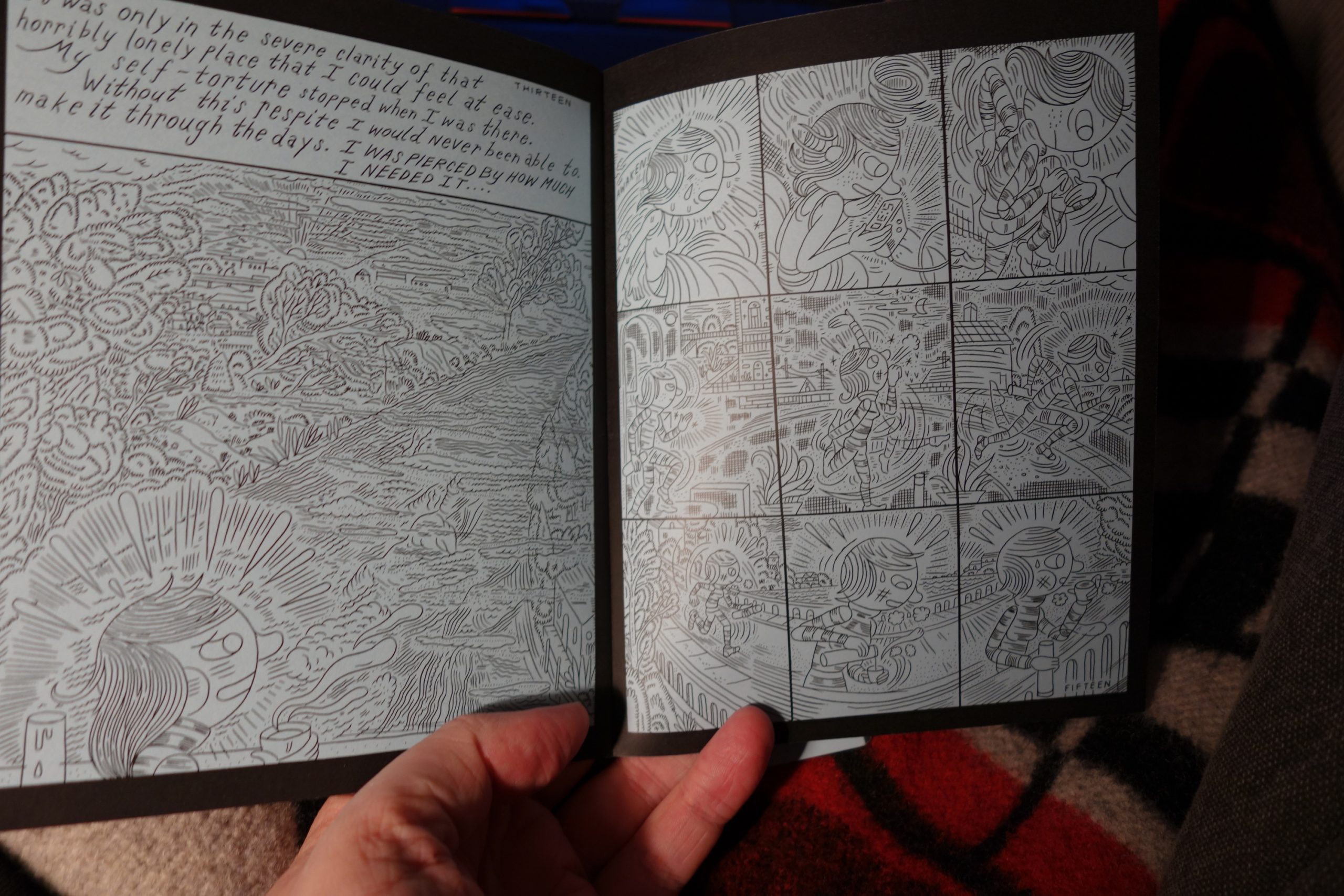 This series of comics is based on a story by Banana Yoshimoto and is about love and loss and stuff. I can’t wait until the third chapter is out. It’s quite engrossing. 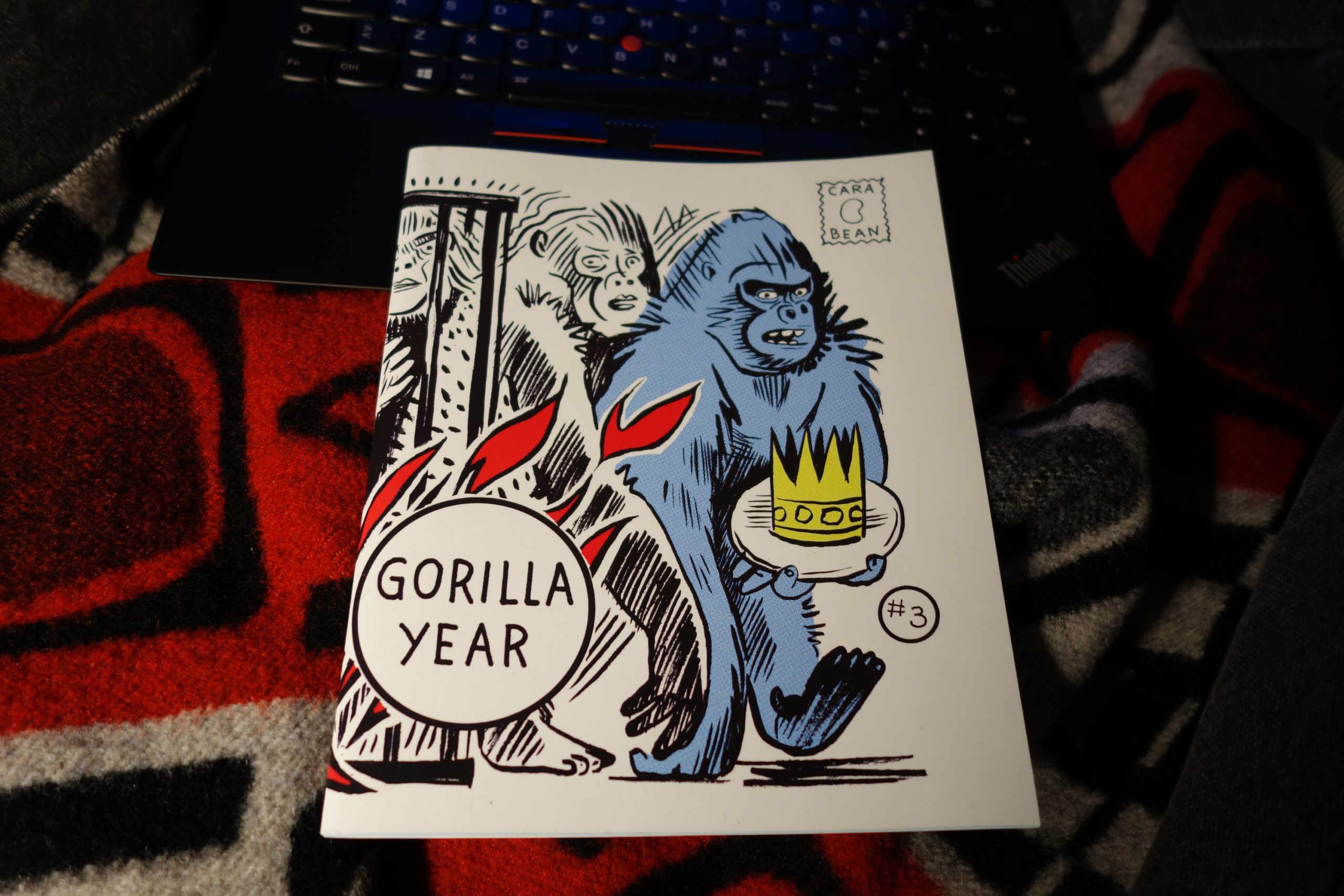 There’s something very appealing in Bean’s artwork. The juicy blacks and the scratchy lines… 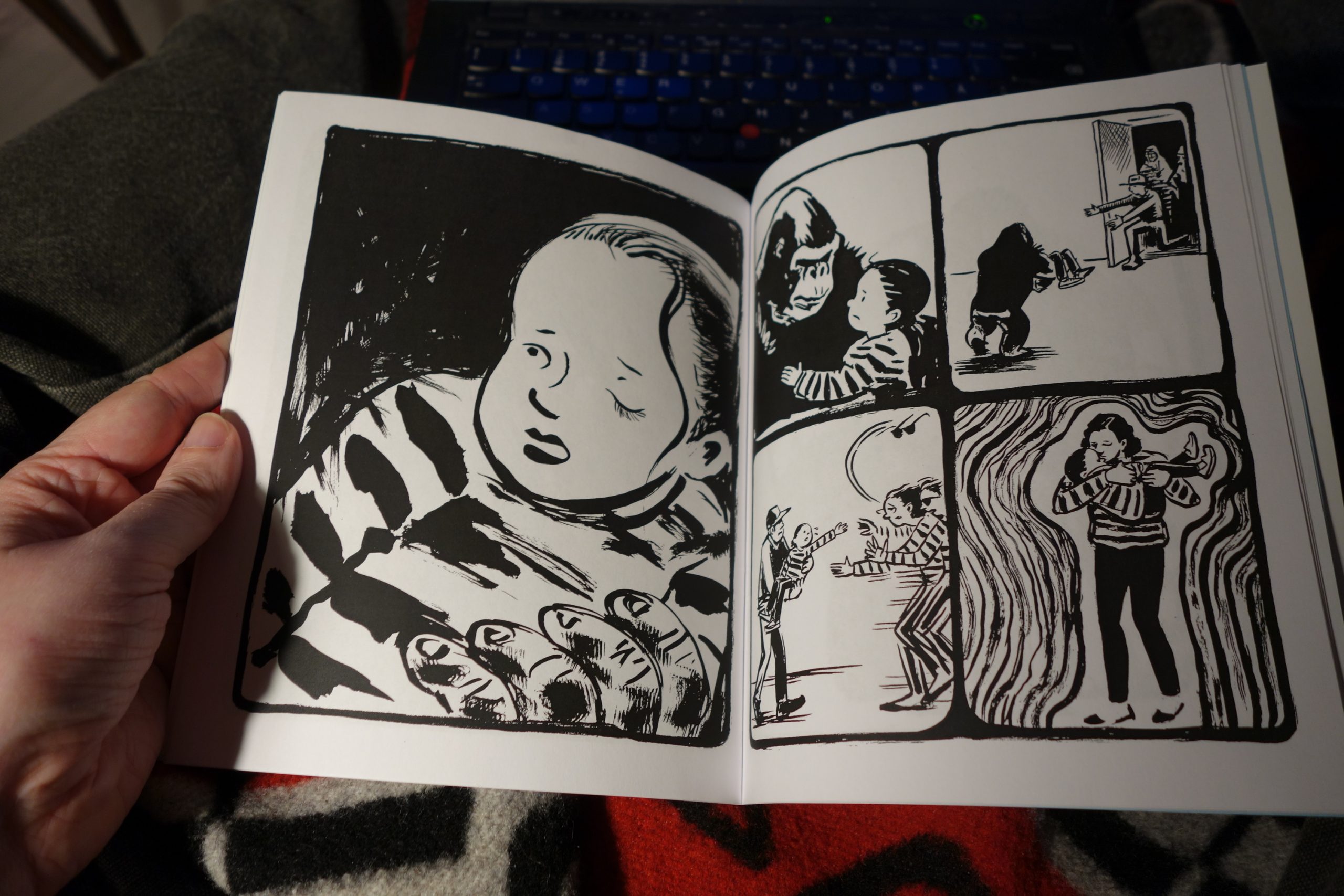 And the stories are both quite affecting and sometimes somewhat loopy.

The Anthropologists by Whit Taylor (Sparkplug) 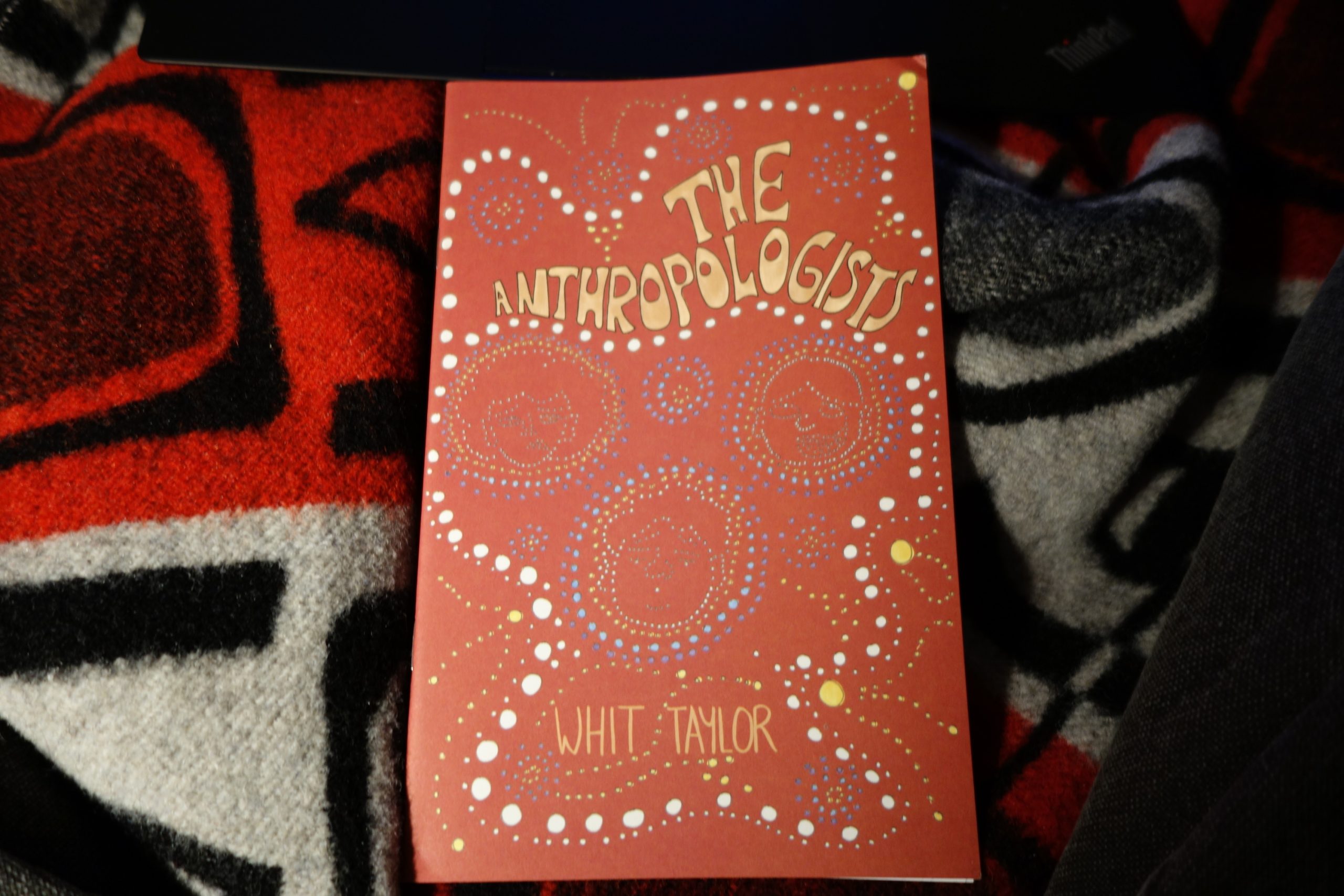 The artwork here doesn’t really appeal to me that much, but the straight-up old-fashioned narrative is appealing. 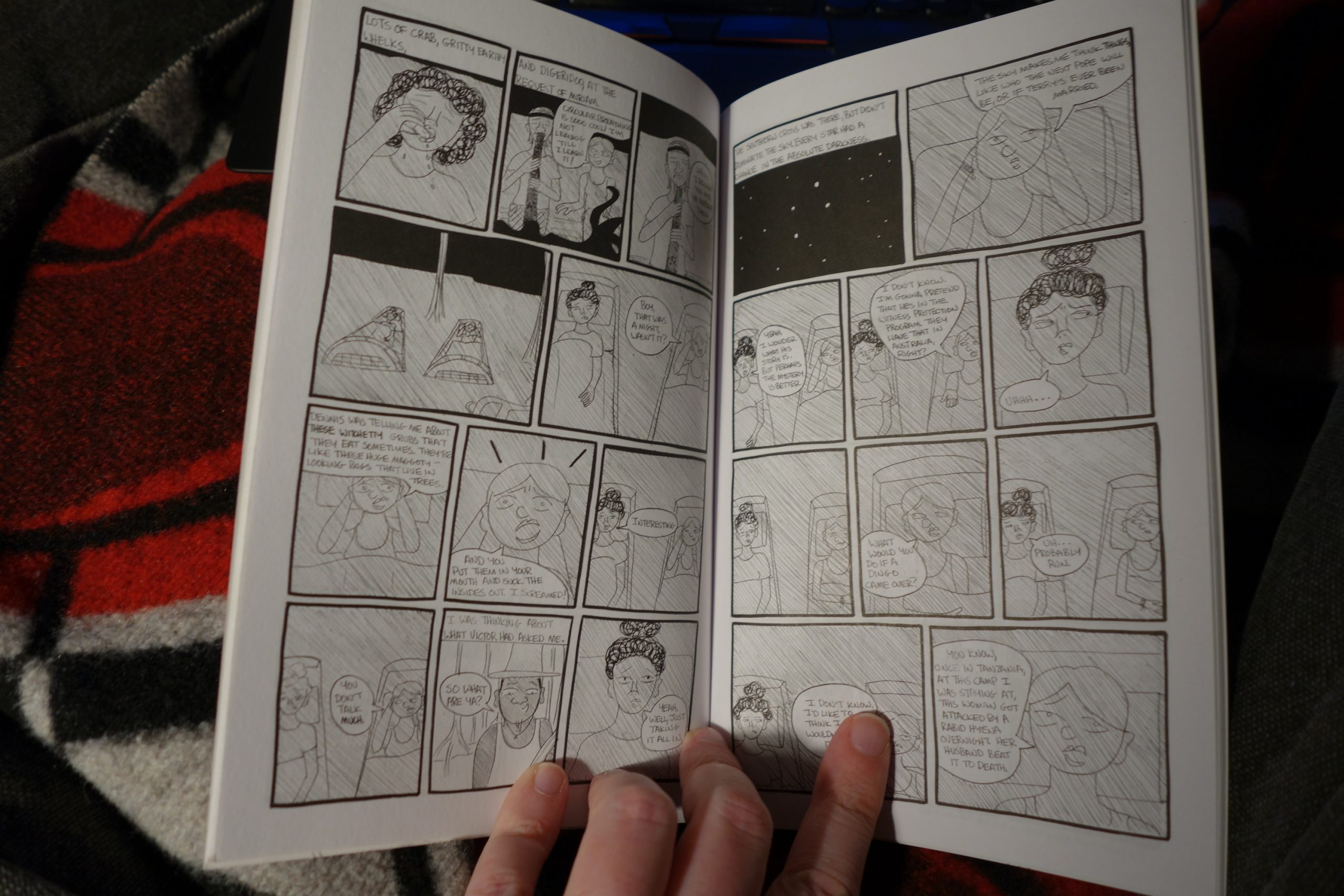 It’s the story of two young anthropology students in Australia. Nothing very dramatic happens, and I guess you could say that it’s not the most original story in the universe, but I still found it quite enjoyable. 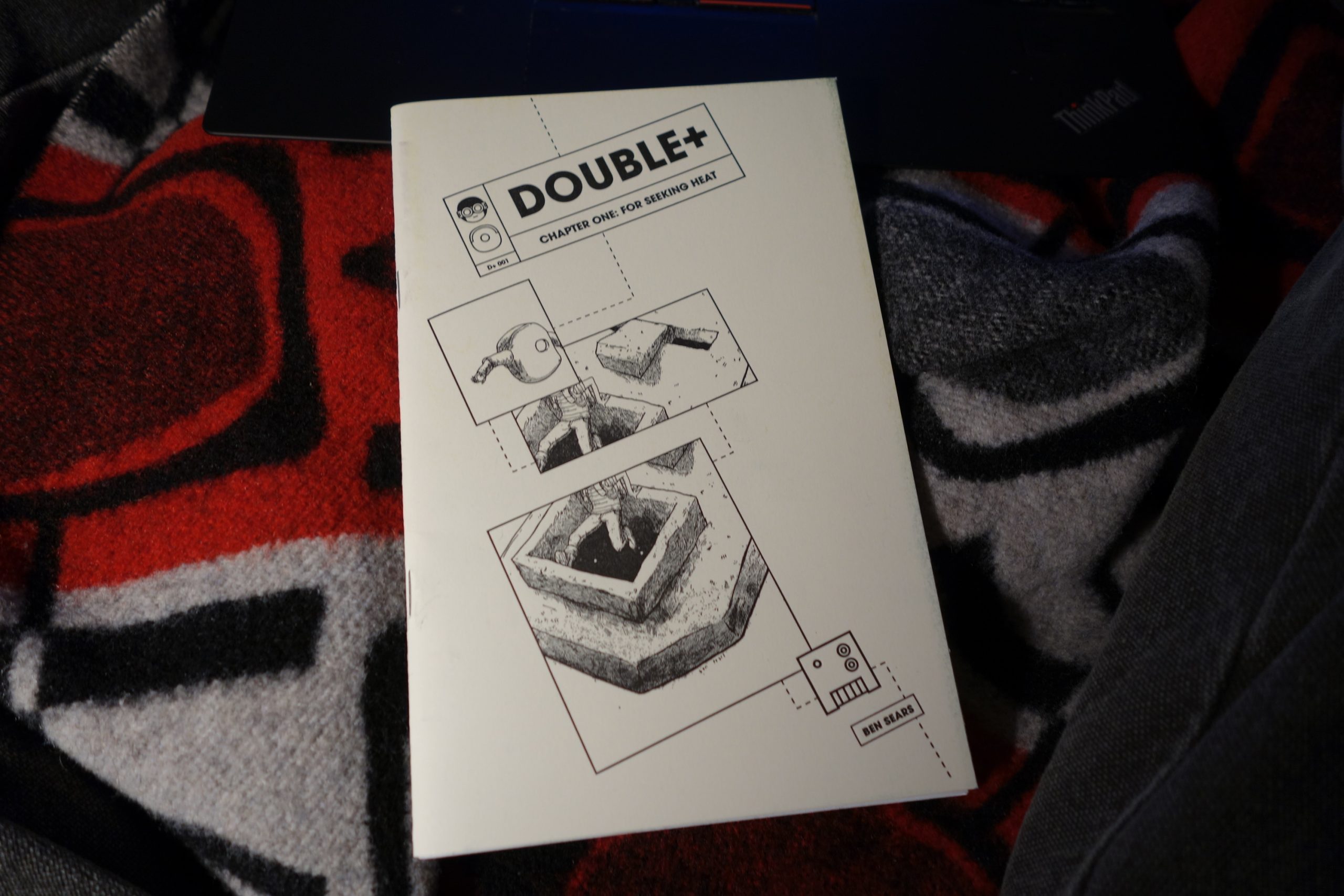 I didn’t think I was going to like this one. At first glance it looked like yet another video game story book (a genre I find way more boring than playing video games, and that’s boring enought), but it’s more of an oddball sci fi quest thing. And the artwork is really appealing. All the pages looks like a sand storm have just passed by. (Or a pixel storm, I guess.) So everything is just a bit smudged and worn. It’s a very nice effect. To round things off, here’s a comic that’s not from my US small press blitz, but from a Berlin trip from a couple weeks ago. 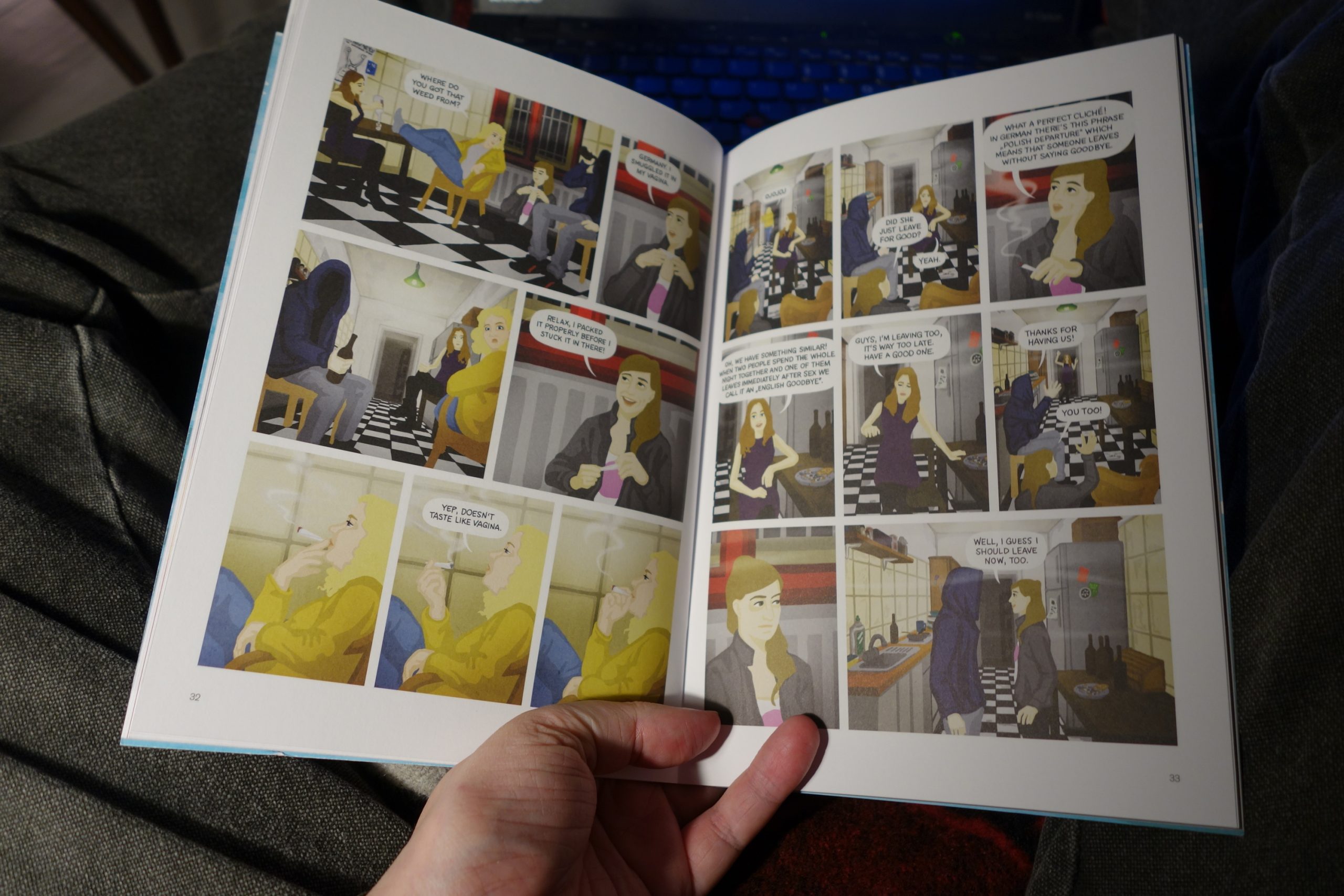 A story of travel and love and smuggling drugs, it has a meandering quality to it that I like quite a lot. The figures are kinda stiff, but the colours are very nice… Well, that’s it. I didn’t want to babble on for too long. Mini-comics, mini-nattering…

Off to order more!