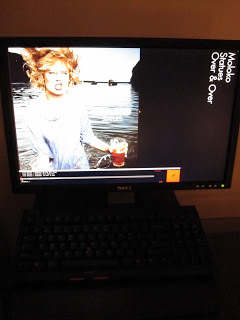 The main issue when I moved to the new flat, oh, three-ish years ago? I think, was how to listen to music.

I want to be able to walk between rooms, listening to the same music.  This means that there has to be some kind of way to distribute music between the rooms.

I looked into various ready-made wireless systems like Sonos, but these all made The System the central point.  I don’t want that.  I want to be able to control the music in any way that I want to, which means from Emacs.

The first element is the sound card.  I settled on a RME Multiface box.  It’s really a semiprofessional music routing card. It has a lot of inputs and a lot of outputs, and you can route any combinations of any inputs to any outputs, while controlling the volume.  You see how this would work for me: I’d just play a flac file, while having each room be one stereo output, and I’d set the volume per output.

I now had all these outputs, but how would I get the music to the various rooms?  I first tried a couple of wireless systems.  They both had two problems: 1) There was a half-second latency, so if you heard sounds from different rooms, it sounded kinda psychadelic.  2) They didn’t work.  That is, they had frequent drop-outs, and made beastly noises while doing so.  I know, I know — nothing that’s wireless actually works.

My second idea was to try a powerline audio thing.  The bandwidth requirements for audio are pretty minuscule, so I thought there might be a chance that something like this would work.  But, as with the wireless systems, it 1) had a beastly latency and 2) didn’t work.  The drop-outs were even more brutal.

So: Wires it is.  I’d have to install wires between all the rooms to get music to them.  But what kind of wires?

That’s when I learned the magical word: balun. It means “balanced/unbalanced”, or something like that.  Basically, a balun is a device that takes an unbalanced signal (like RCA audio) and makes is balanced (or what we computer people call differential).

Doing research over the intertubes I found a few companies selling this stuff.  The baluns are generally non-powered, and use cat5 cabling.  Like these babies:

They are just perfect!  You just hook them up to your audio outputs, string some cat5 to a different room, plug another one in there, and plug the audio output into whatever amplifier/speakers you have there.

The sound quality is totally fine, too.  That is, I can’t hear anything obviously bad.  There’s bass, and there’s treble, and there’s the middle part.  Perfect!

The main problem is, of course, all the cabling.  That means a lot of these: 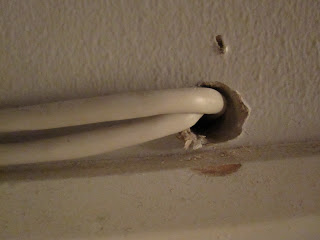 And some stretches off wall that look like this:

Ok, some of those are Ethernet.

That’s a lot of hammering and drilling, but it’s totally worth it.  It just works 100%.  No drop-outs, no odd noises, no latency.  And the fi is so hi.

Wired is the new black.