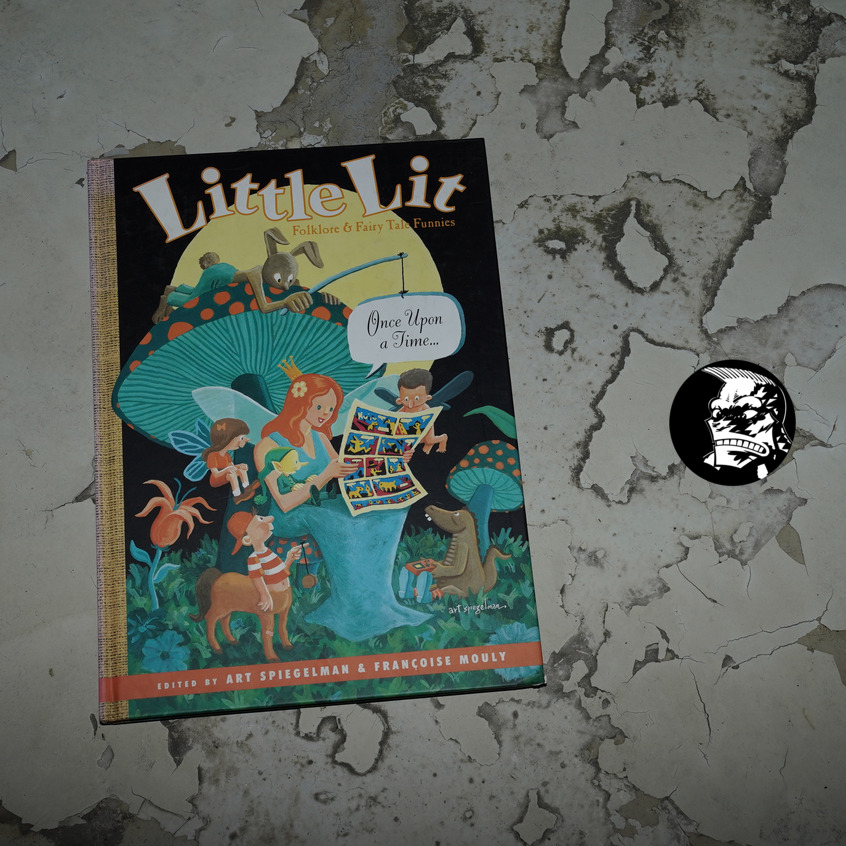 I didn’t originally plan on including anything from the Raw Junior, LLC line of books… but I thought it might be interesting to at least talk about the first spate of Little Lit books.

These are published by HarperCollins, but apparently put together by Spiegelman and Mouly (with Chip Kidd co-designing). The selling point, I think, is what’s in the orange line at the bottom there.

“Comics: They’re not just for grown-ups anymore!” the back cover tells us. Which is a hackneyed joke today, but twenty years ago, it was a pretty novel idea in the US (before all the Raina Telgemeiers and the Dav Pilkeys). 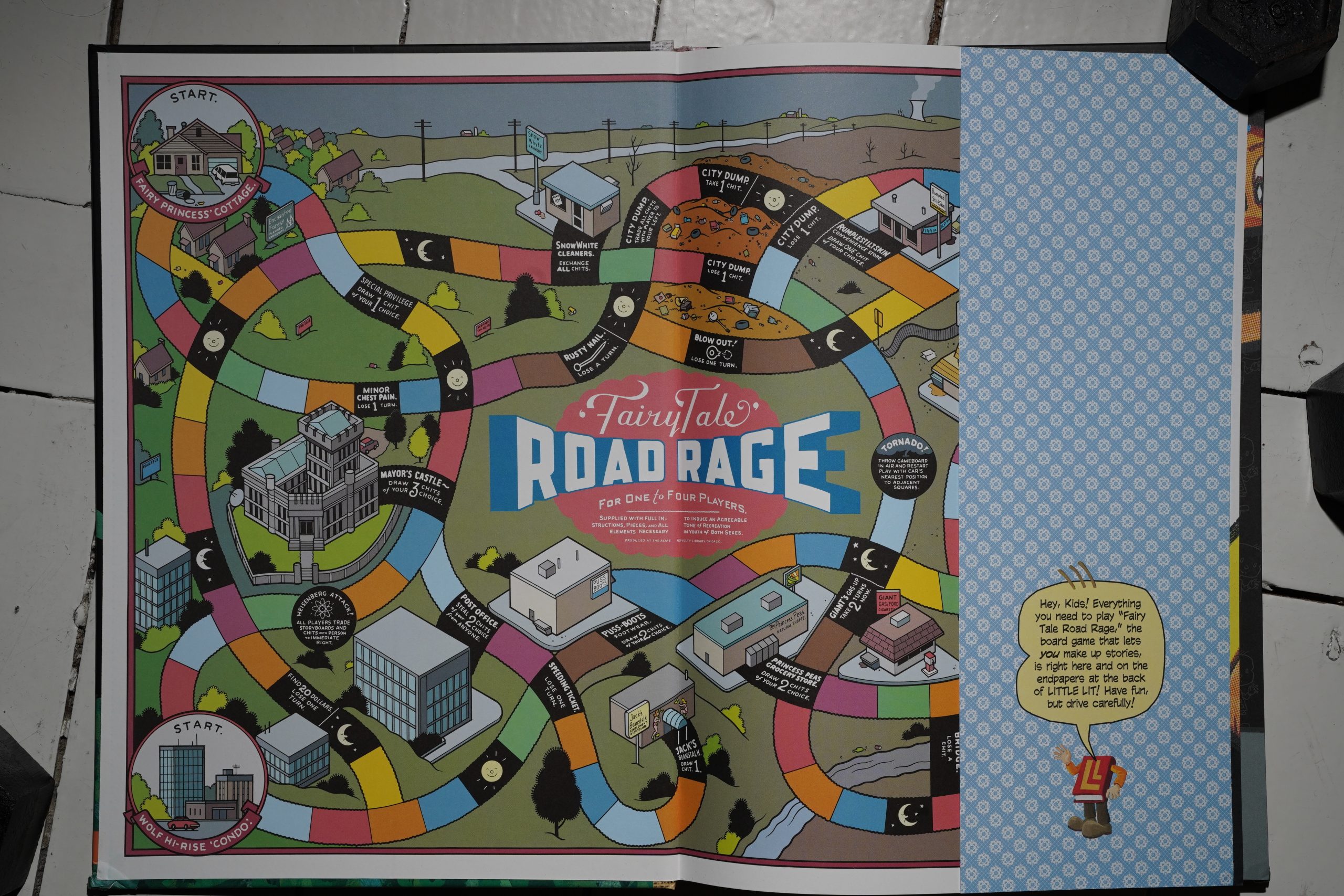 There was a real push to do comics for kids in the late 90s among alternative cartoonists (perhaps because so many of them now had kids). They all had one thing in common: Not a single actual kid would touch those comics with a ten foot pole. It’s instead be older fans of the cartoonists other work that would buy those books and then go “most whimsical! most whimsical!” while stroking their necks beards.

So… we open with a… most whimsical “Fairy Tale Road Rage”… game from Chris Ware, which has things like “Minor Chest Pain”, something all six-year-olds relate to naturally. 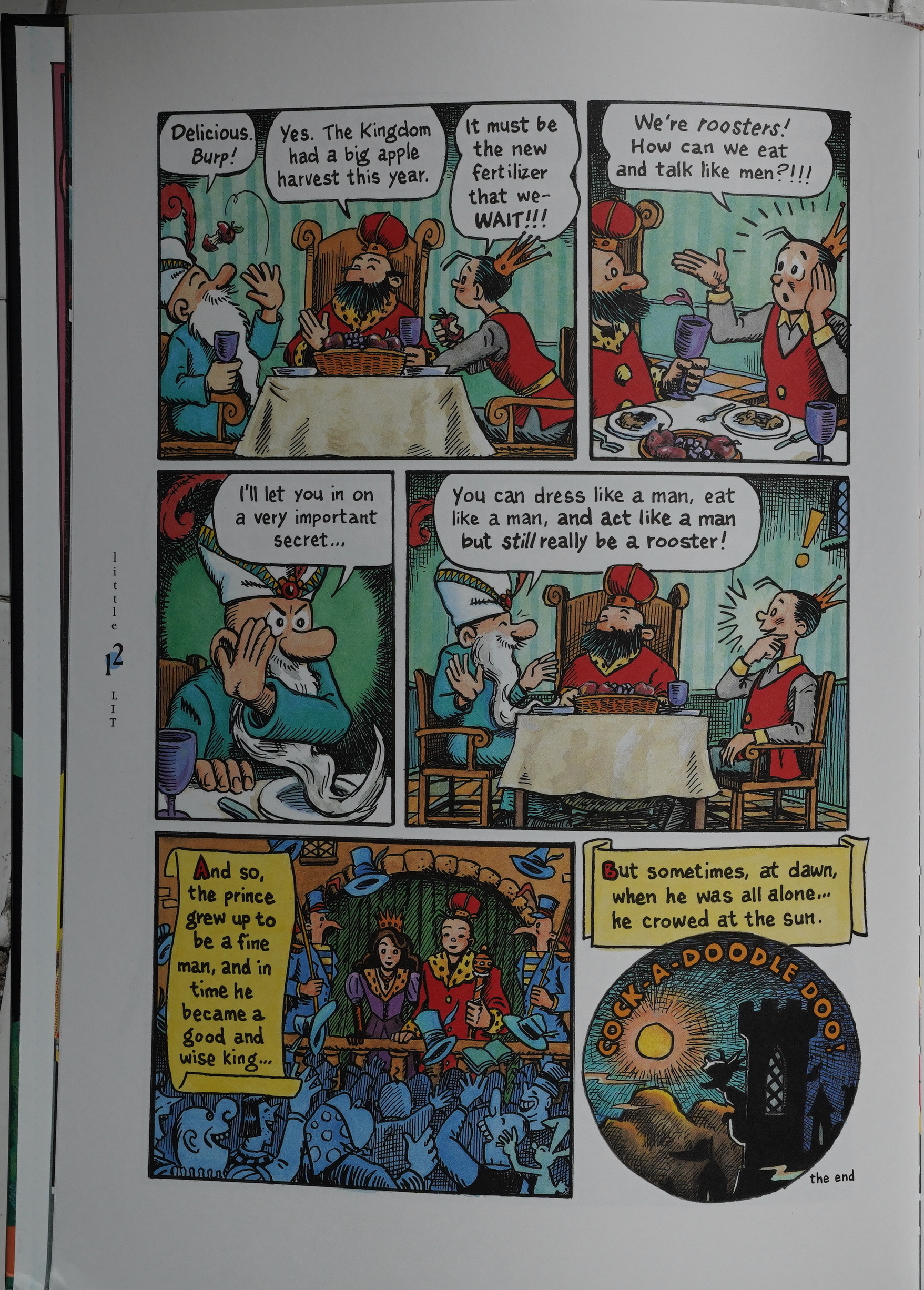 The theme for this handsome book is fairy tales, which I guess should guarantee that no kid would ever want to look at it. (Art Spiegelman.) 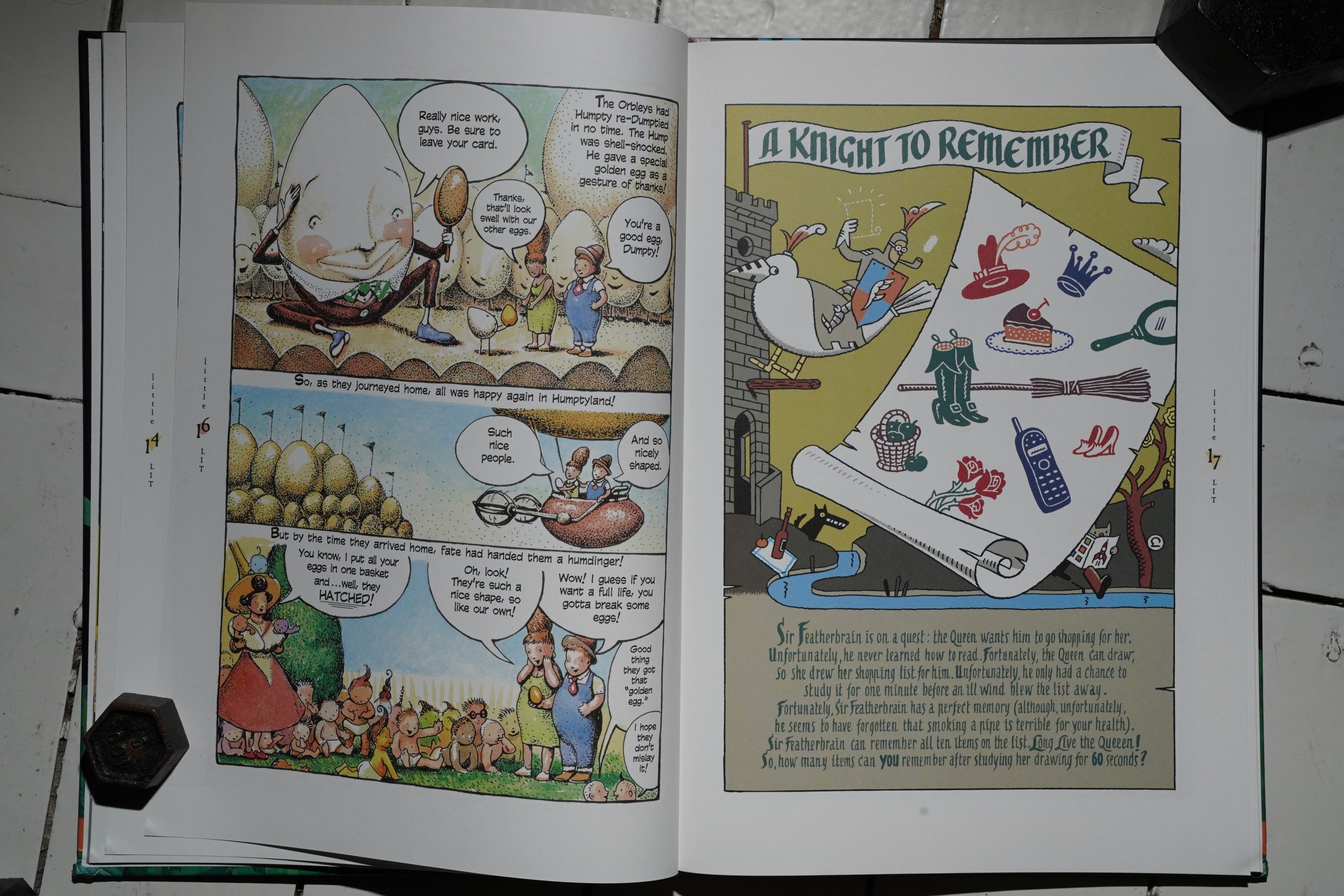 As usual, the artists lean hard into “whimsy”. (William Joyce and Ever Meulen.) The main problem is that they’re jamming so many things in here — I think there’s 18 pieces over 64 pages. I don’t have my calculator on me, but I think that translates to “not a lot of pages per thing”. Virtually none of these stories have room to develop, so they read like weird non-sequiturs. 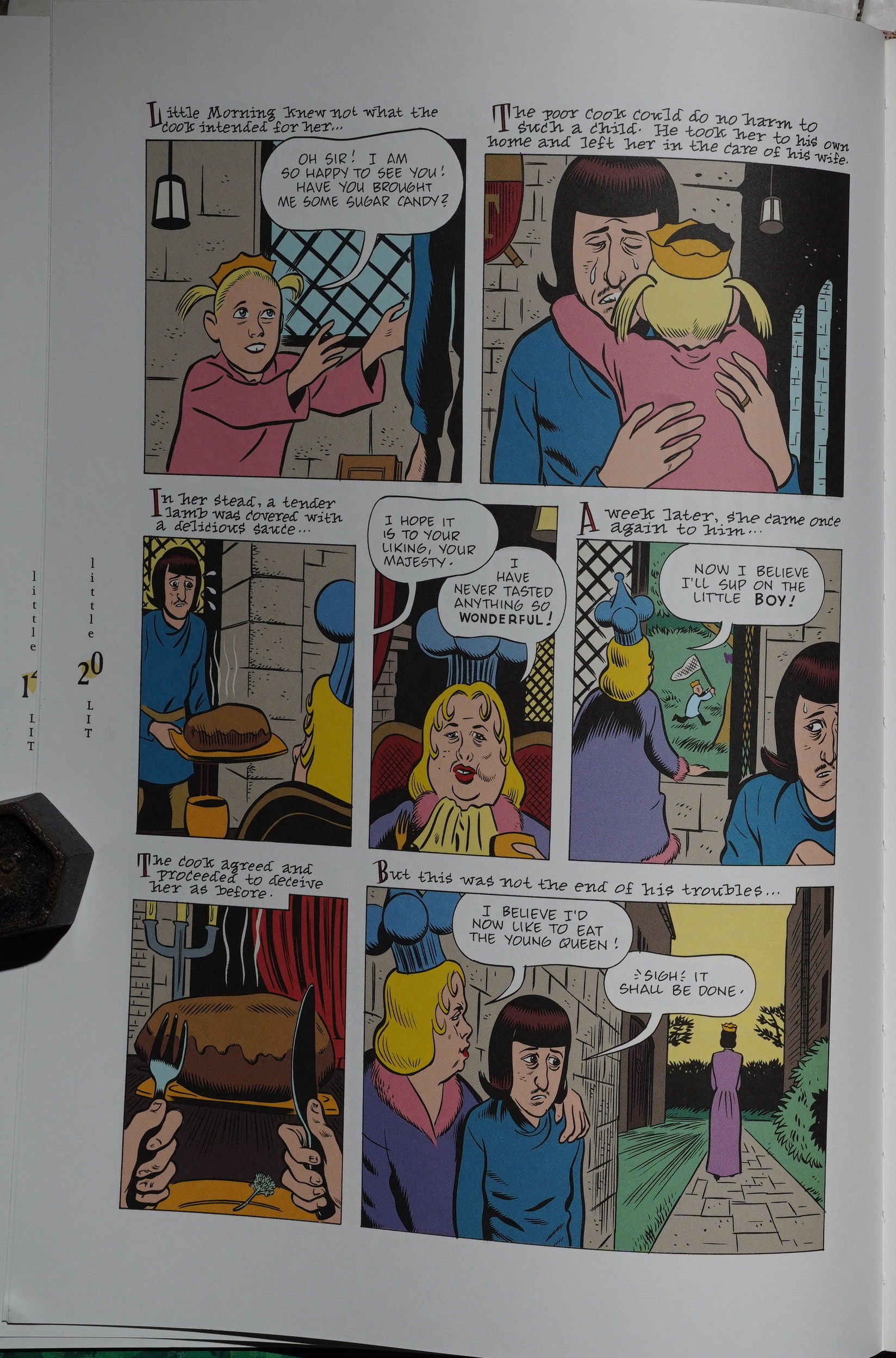 Daniel Clowes does his creepiest story ever. 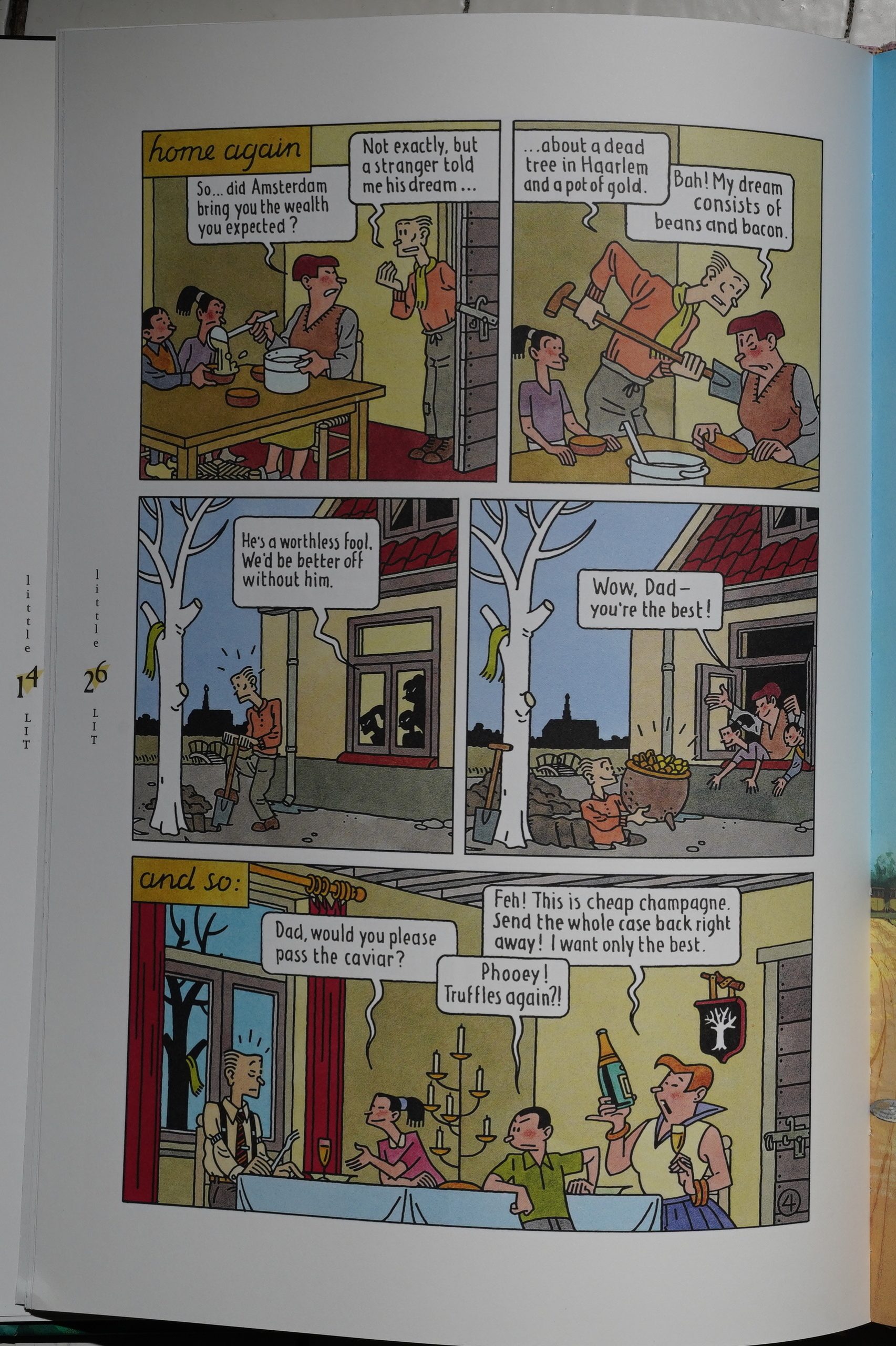 It’s not just that these are bad comics for kids — they’re just bad comics all around. Except this one! It’s, of course, Joost Swarte, and it’s good. 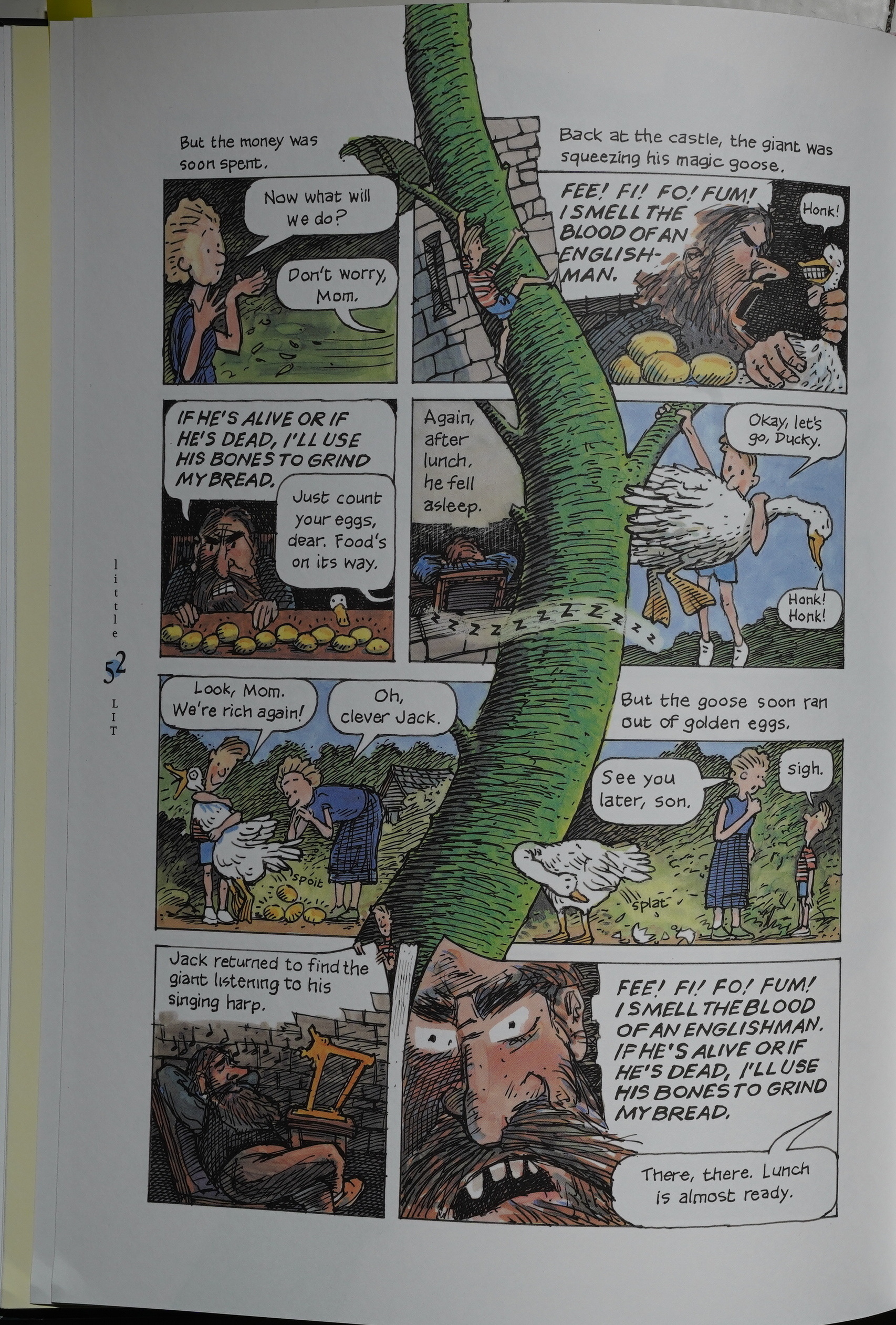 The worst are the ones that just recap a fairy tale kinda straight, like David Macaulay here. 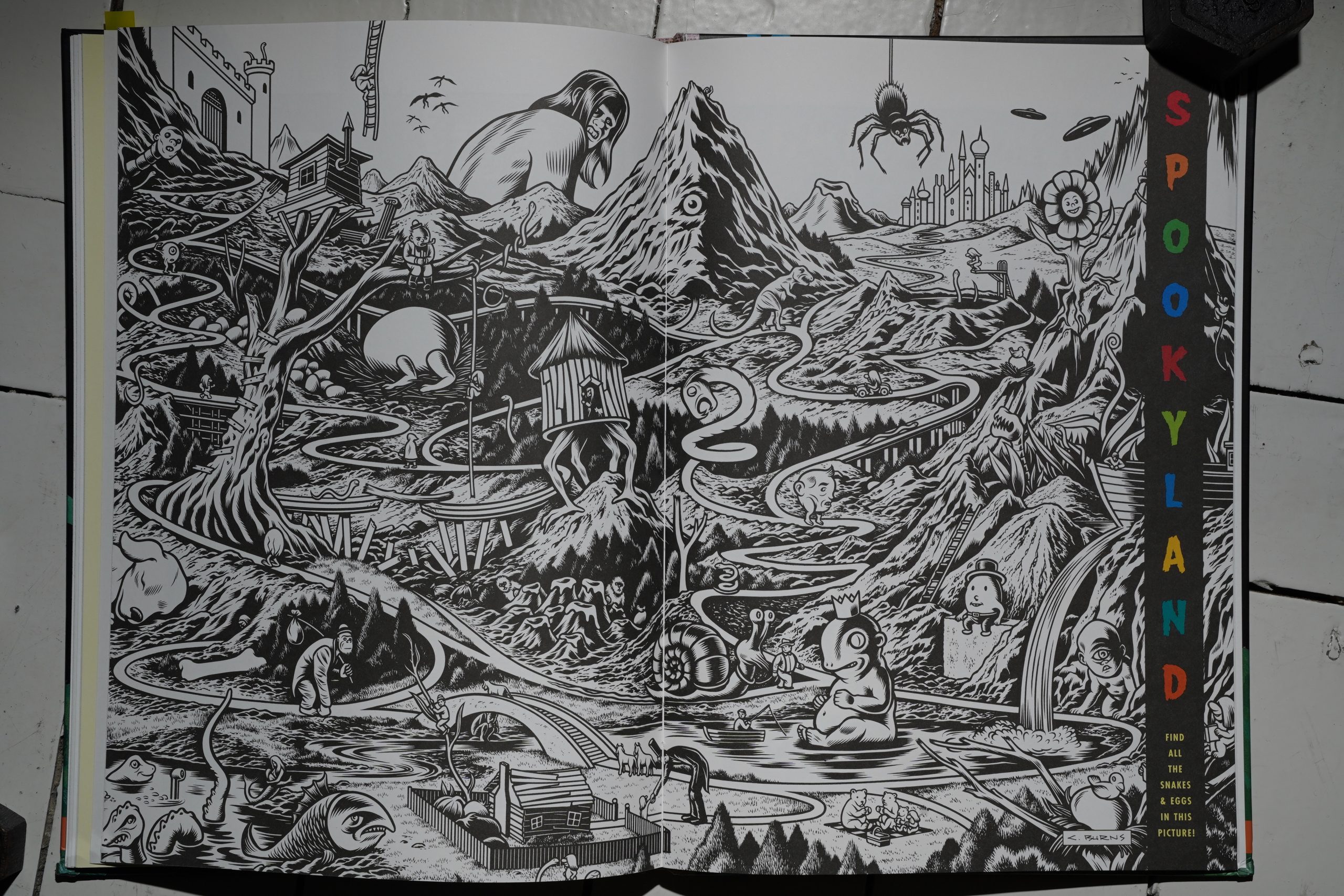 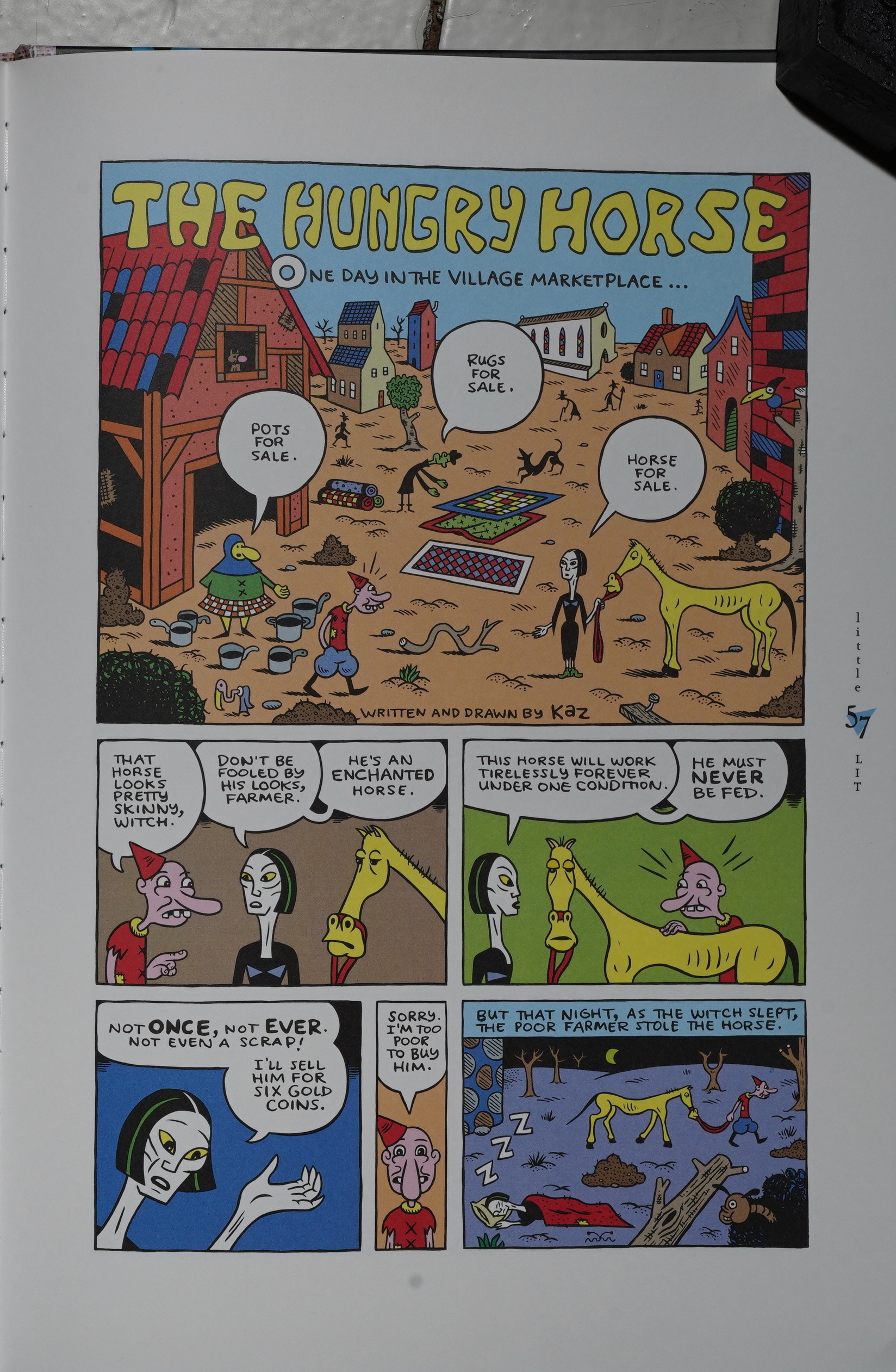 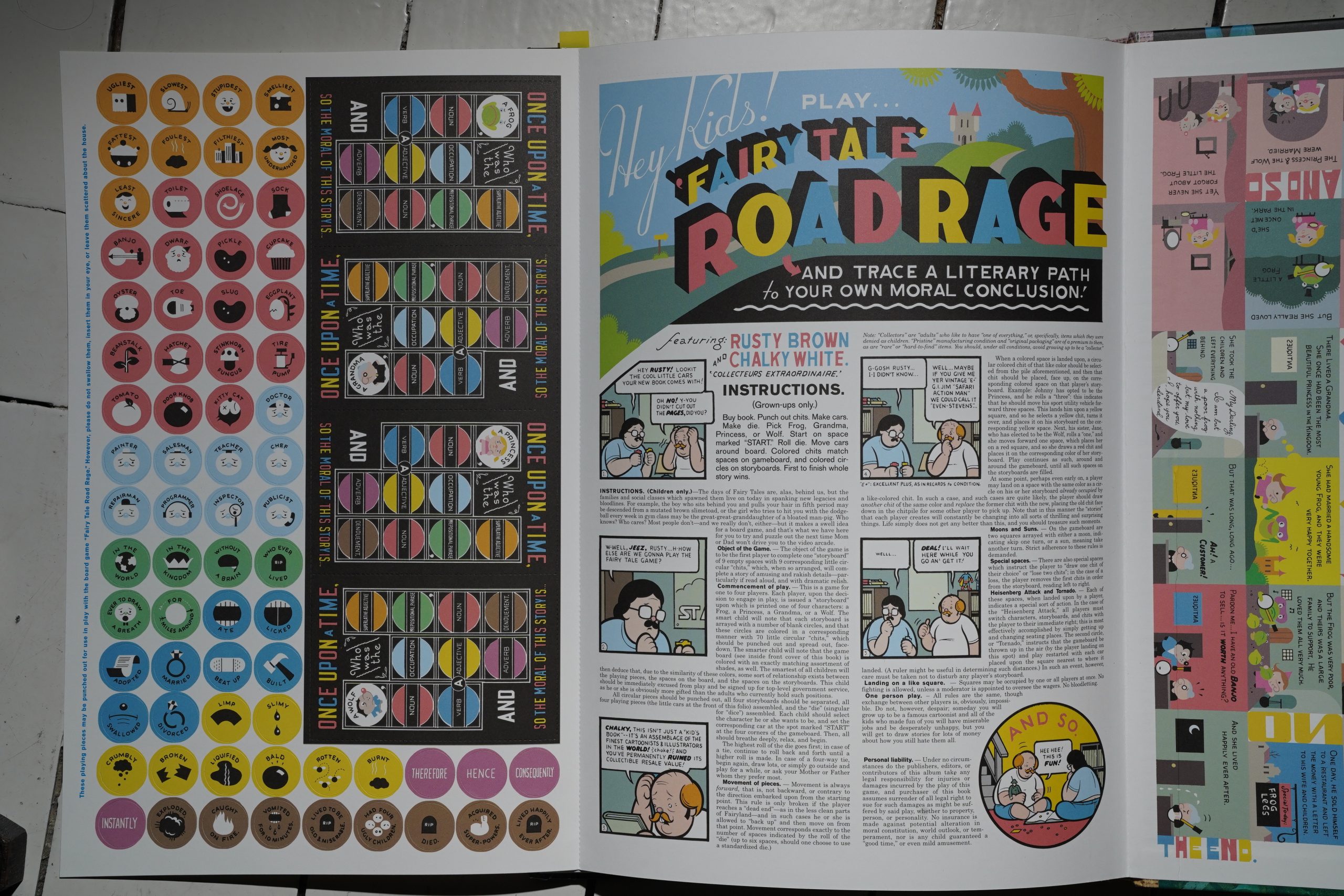 And finally we get the instructions for how to play the Chris Ware game. All the six year olds probably spent hours and hours on this, right?

So what we have here is a classic example of the How Not To Do Comics For Kids genre. (To see what kinds want, go to the nearest bookstore and look at the stacks of Dog Man books.)

I heard Little Lit recently
described (Oh, 0k, I happened to be in the
Fanta offices and overheard one of the phone
guys talking about it, so I eavesdropped, big
whoop) as “A children’s book —well, more of
a book for children with their parents.” That’s
right: t appears to be a childrens’ book but
really isn’t.
As you can already tell, my review of Little
Lit is harsher than a book ostensibly written for
kids probably seems to warrant. This is because
the publishers are trying to do something new
and interesting, which merits closer scrutiny
than standard comic book fare. And the stan-
dards of things for children are different than
the standards of things for parents, which are
much different than the standards of those two
demographics combined. Also, I’ve gotta lot of
rage. But please keep in mind, there is not a
book in the world that couldn ‘t benefit from a
few of Lies basic structural concepts (read:
earnestly intended mistakes).
Let’s start this time with Chris Ware, the
man who, if you lived in a box, you would
probably believe invented comics jut a few
weeks ago. The “story” included here is a mas-
terful game entitled Fairy Tale Road Rage. Mr.
Ware, please note: if you’d really like us to start
constructing these things (and the temptation
is growing to irresistible) please insist on hea’+
ier cardstock Or consider switching to differ-
ent materials altogether. (Who among us
wouldn ‘t blow $14.99 of our next paycheck on
a Ware-and-Kidd-designed board game?)
Please, consider my suggestions. Thanks!
Yet the game itself seems to be a fun cross
between Mad Libs and an actually enjoyable
board game. Seems, I say, because I didn’t put
the thing together. Before we begin to play, we
must read the directions thoroughly. And
that’s when we realize that Ware is taunting us.

Which seems like a pretty good place to
mention Charles Burns. Burns, who in my
opinion has matured from a damn good
comics artist with Big Baby to one of the better
storytellers today with Black Hole. This being
said, however, he really isn’t appropriate to the
expressed theme of Lit, unless you’re really
pushing the old German fairy tale themes of
death, destruction, terror and bloodletting. In
fact, Burns shouldn’t be even mentioned in
the same room with under-14s until they have
proved themselves worthy, and this from the
same Ms. Penmark who feels we should give
away gay porn in the public schools because
we’ve been neglecting the queer youth of
America for too long. Under no conditions
should even the worst of children be subjected
to Charles Burns. The stuff is too scary.
Yet it just underscores my theory that Lit
isn’t really for kids at all, despite the back of
the book’s proclamation: “Comics. They’re not
just for grown-ups anymore.” The comics and
games, some more traditional than others, are
a good mix of funny, gory and sweet. Some of
the stories will be above children’s heads. Or
rather, the underlying gist of some of the stc»
ries will be (kids will enjoy the book solely
because it’s a fancy book made in part for
them) except for the Burns, by which they will
be scared, and it will make them run away and
hide, and possibly never look at another book
again in their lives for fear there could be
inside more black and white line drawings of
things that should be a little bit funny, but
really are the most terrifying things ever
imaginable. Anyway, the thing of having
adult jokes wedged into kids stuff is real-
ly popular right now, and plus, it
makes the kids feel intelligent when
they get the jokes, which is a nec-
essary confidence-booster for
most kids.