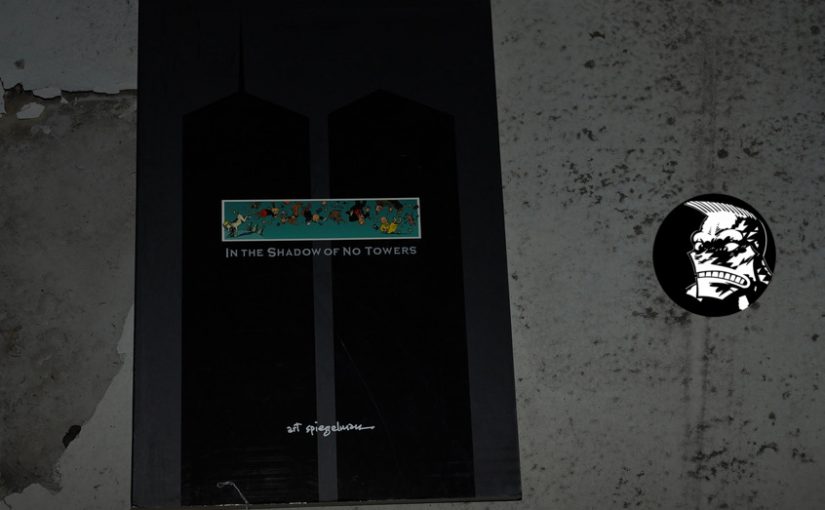 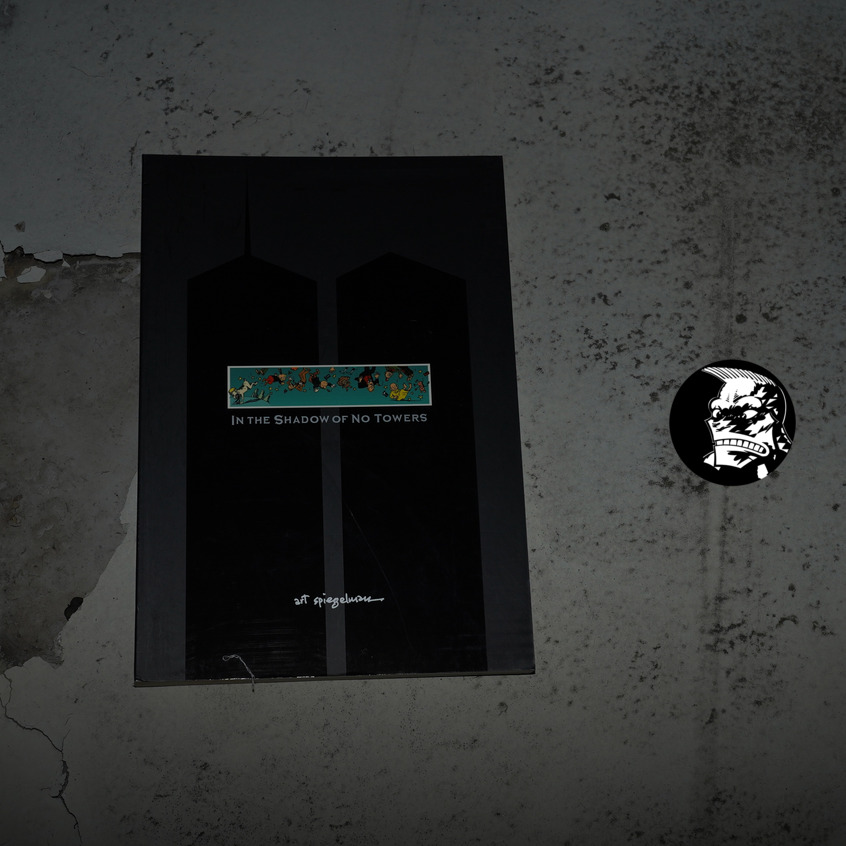 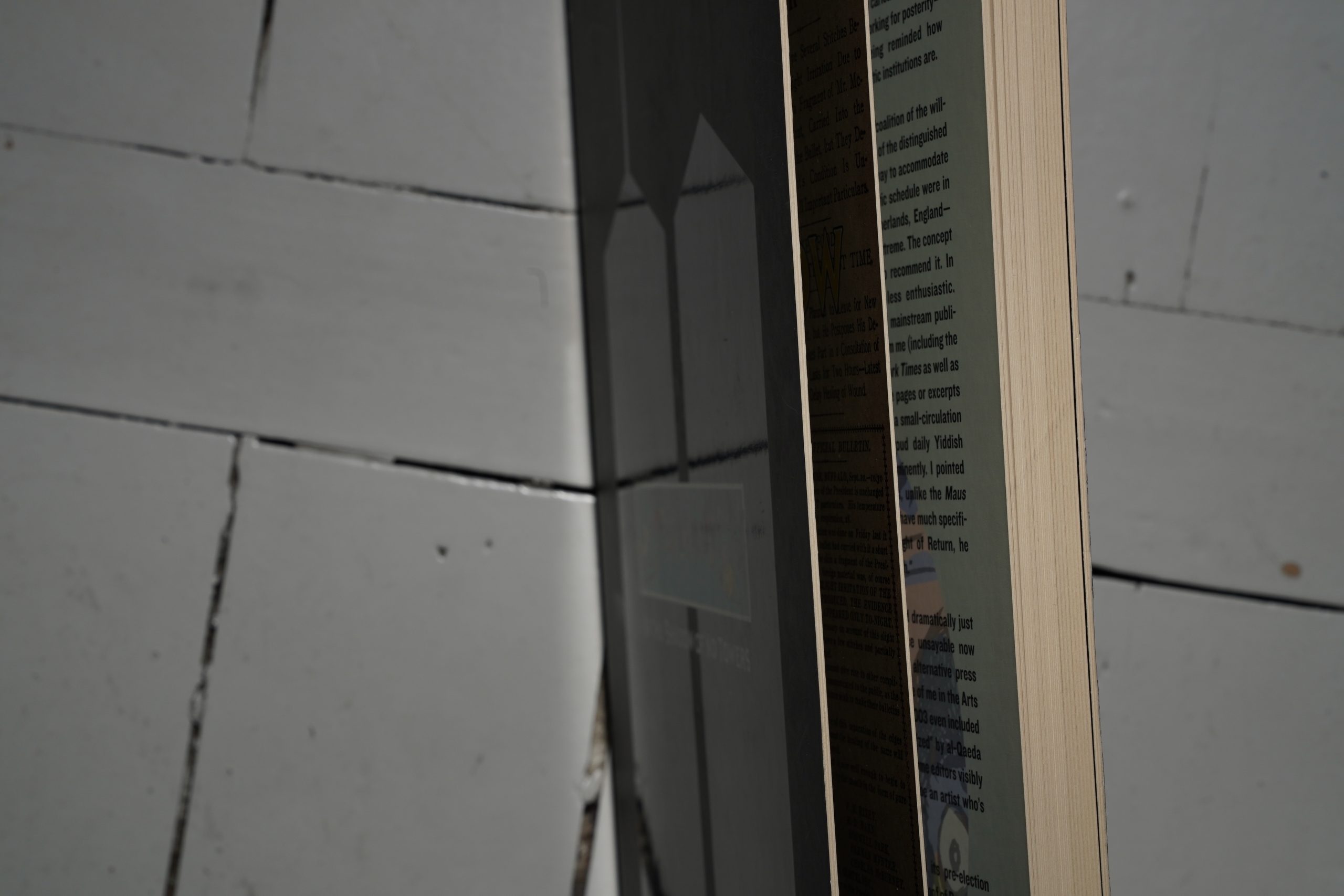 This is Spiegelman’s book about the 2001-09-11 attack on New York, so even being slightly critical feels both churlish and besides the point. On the other hand, I do remember feeling somewhat disappointed by this book, so let’s see…

This is a pretty thick book in just about the same format as Raw. But it doesn’t have that many pages — it’s printed on thick cardboard stock. 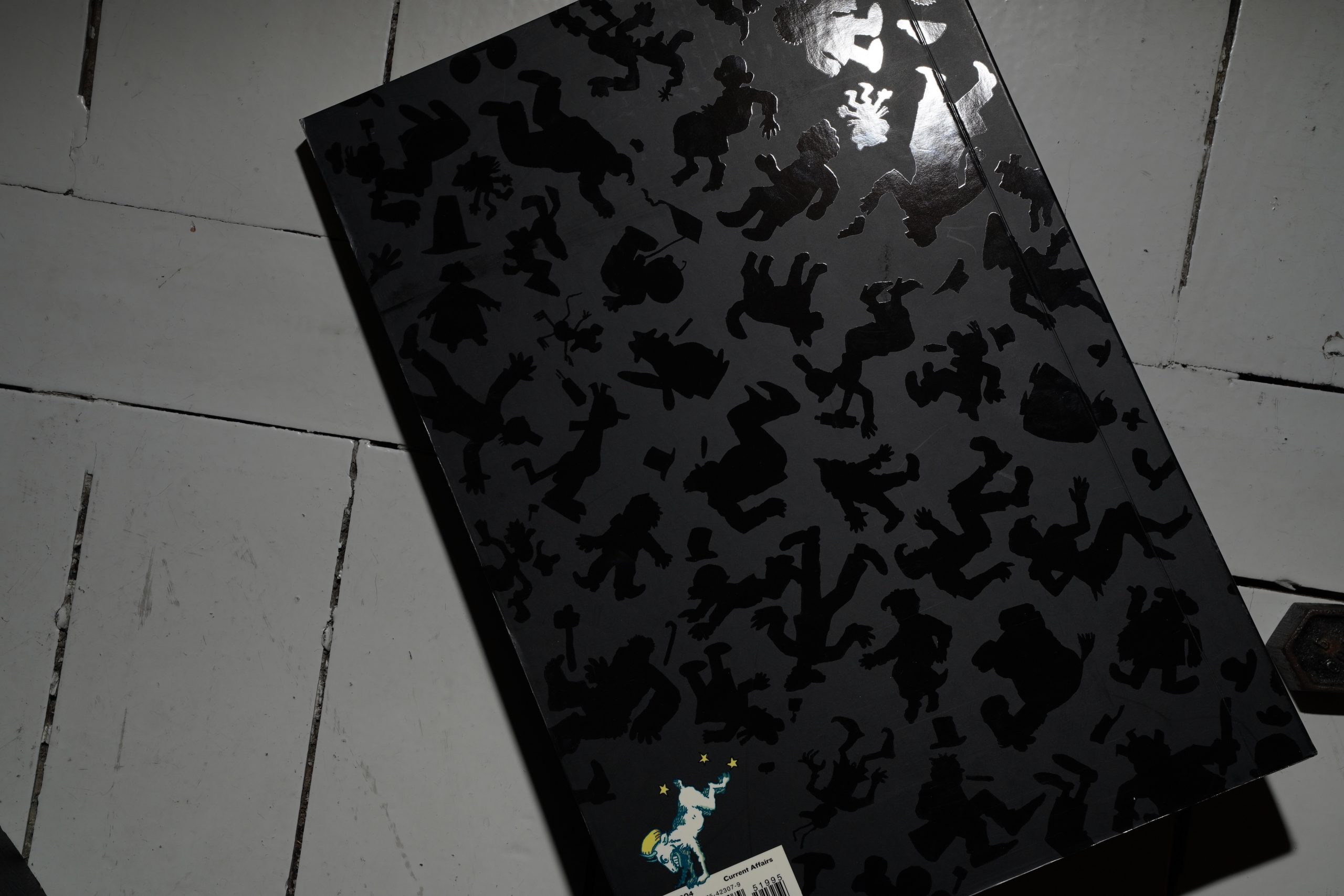 It’s got very high production values — the spot varnish is used in original ways. (This looks totally black unless you’re holding it in the right angle.) But… er… is this… is this in good taste? I mean, I winced when I realised what was going on on here. 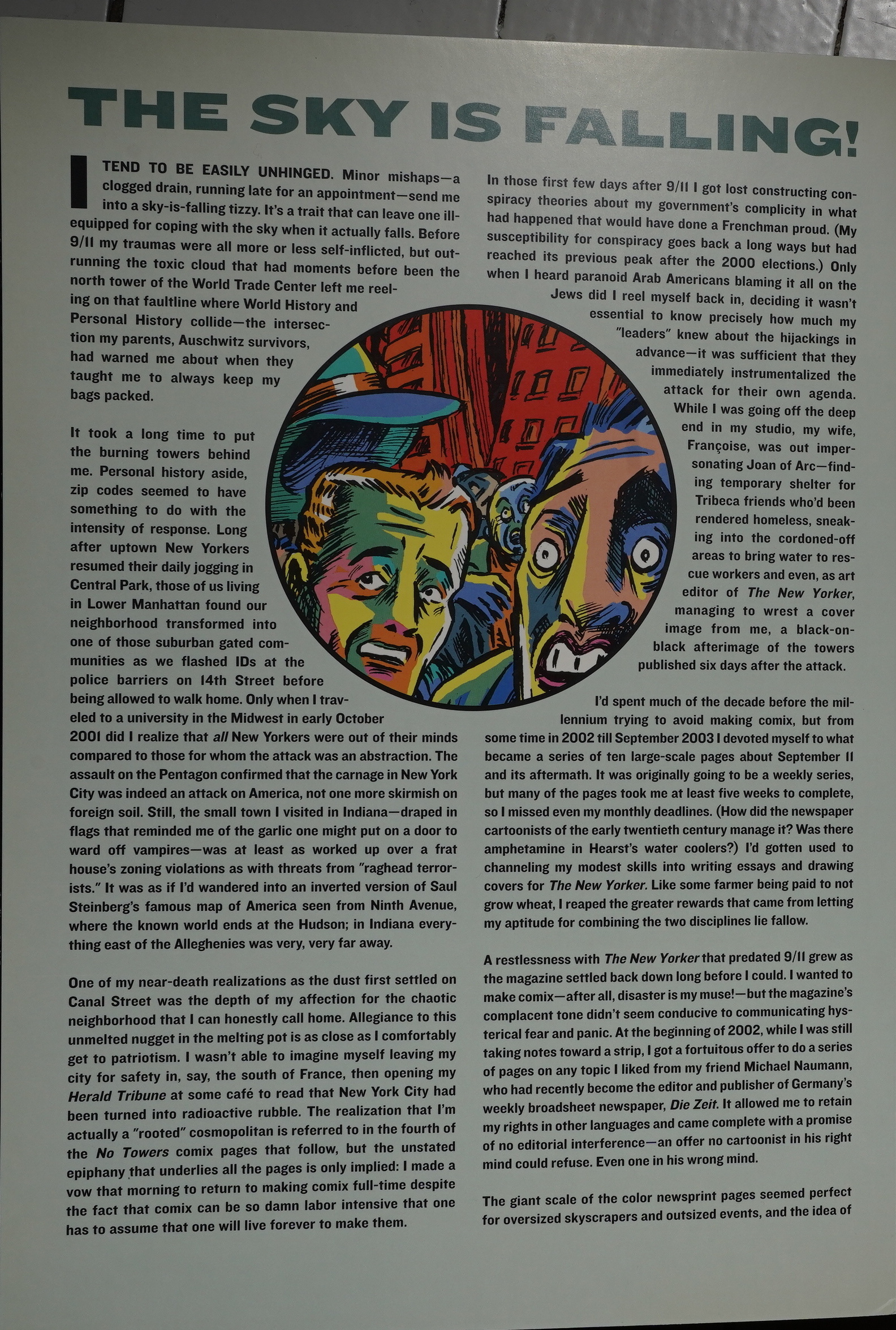 The book starts with an introduction that explains how this book came to be: Spiegelman was offered a full page in one of those German newspapers that still haven’t converted to tabloid format. So one huge, full page per month. 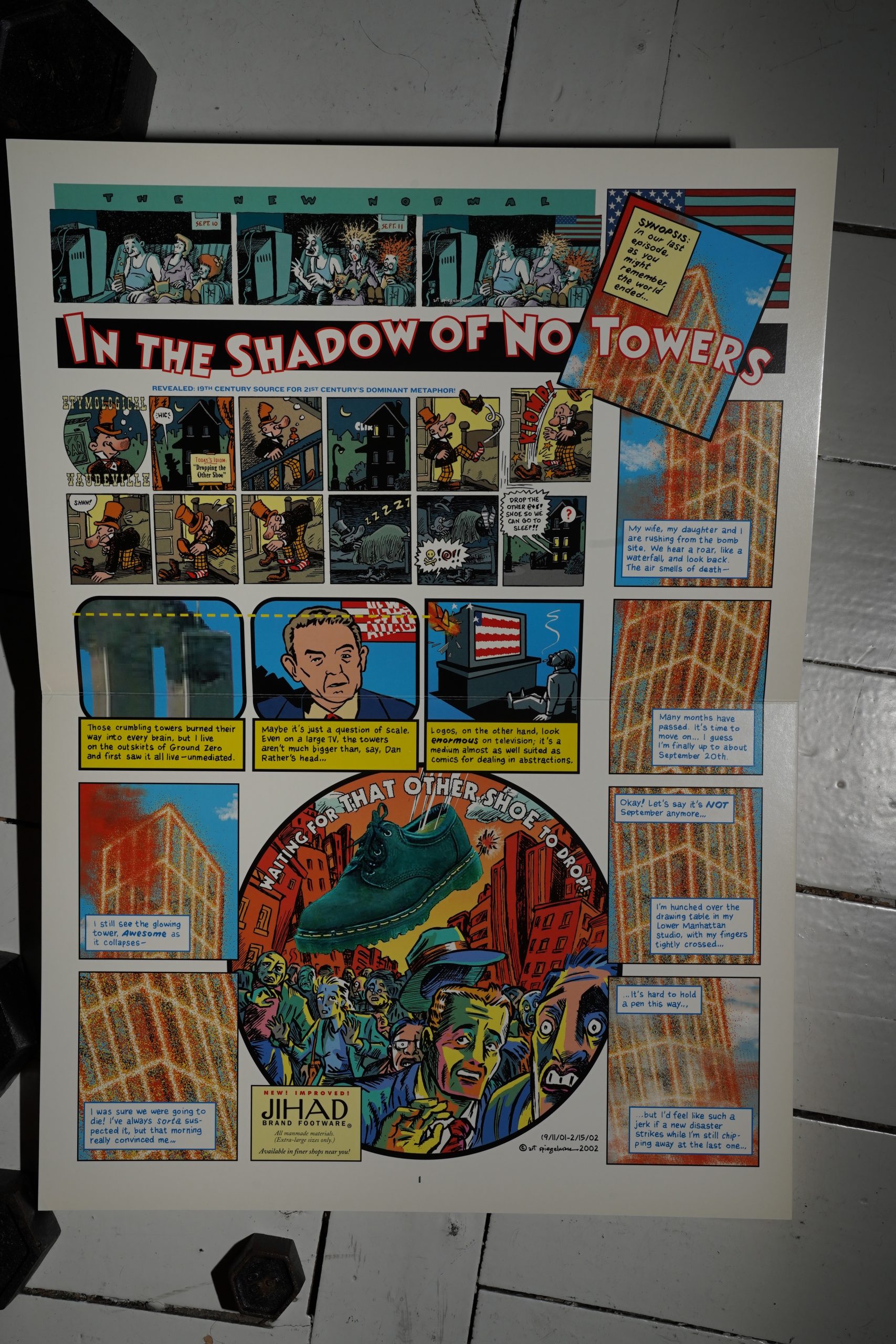 So the pages are printed sideways here — and each full size original page span two pages in the book. I don’t think I’ve seen anything printed quite like this — it’s an interesting object in itself.

And while reading the first few pages, I couldn’t understand just why I was disappointed by the book. It’s pretty strong stuff. 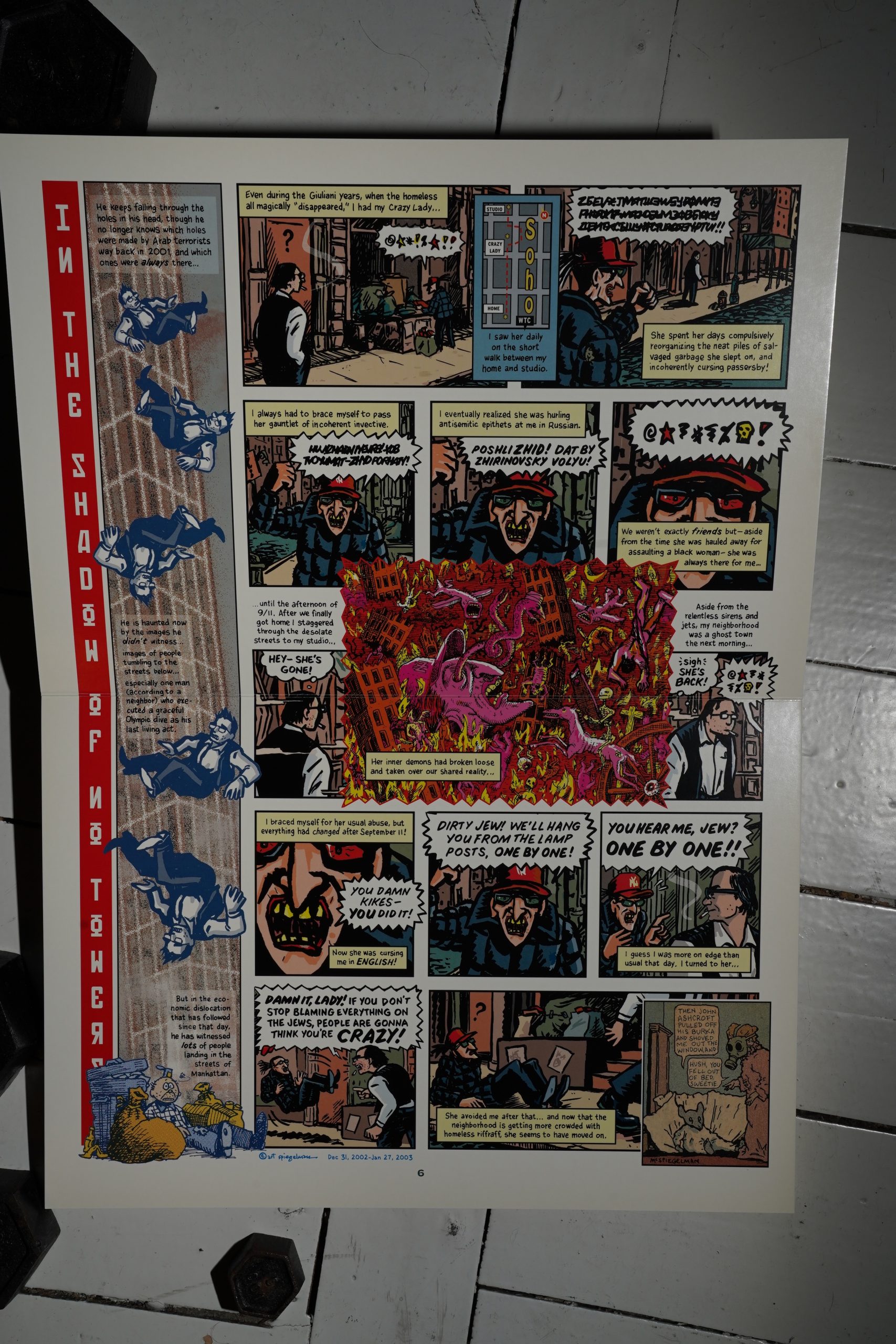 There’s only ten full-sized pages, so there’s not that much room to develop much of anything… but as vignettes go, it’s pretty good? I don’t much enjoy the digital bits, but the artworks fine… 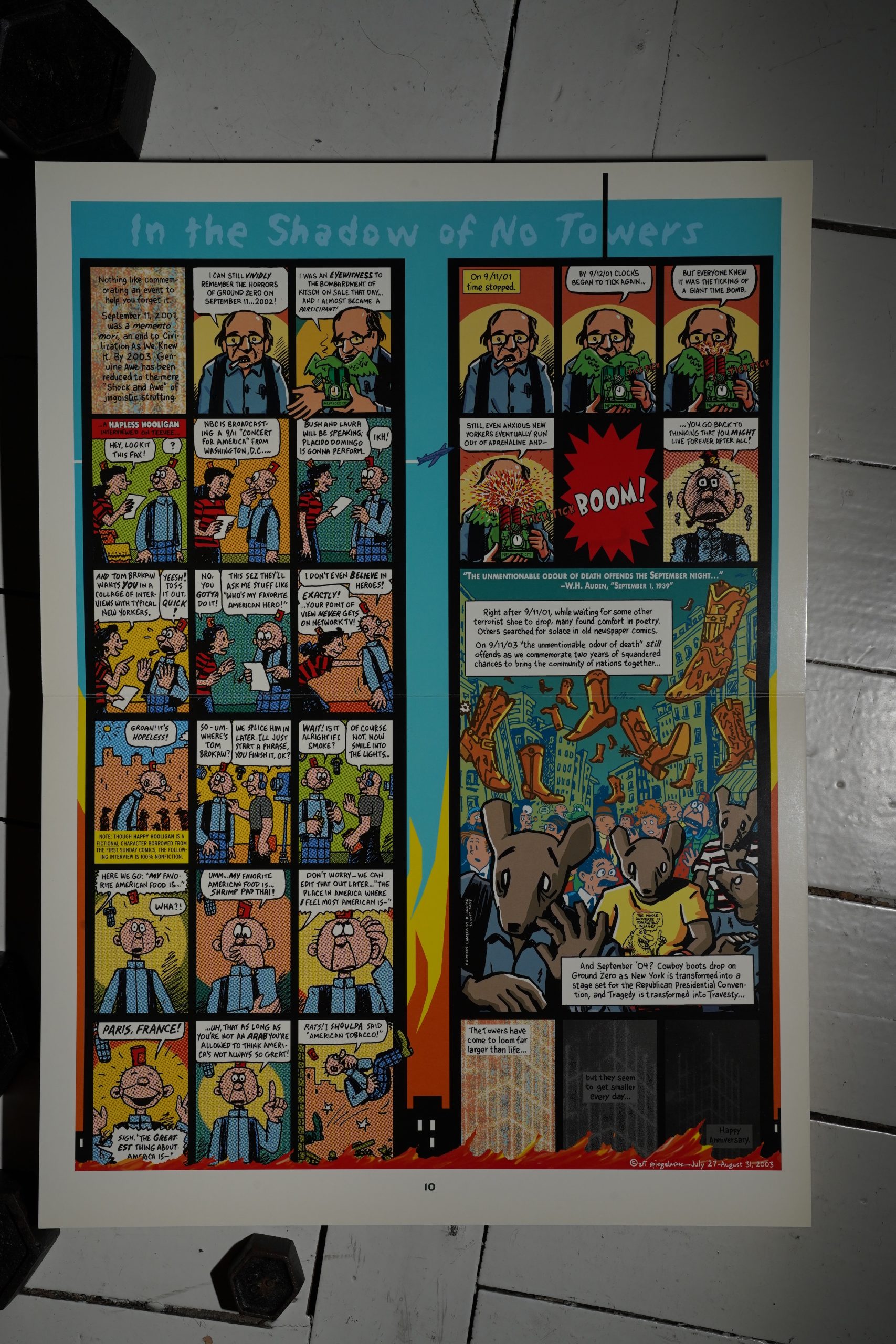 By the tenth and final page, I was agreeing with my assessment from a decade and a half ago — it’s just such a slight book. It feels like Spiegelman was bored by the entire thing by this point. 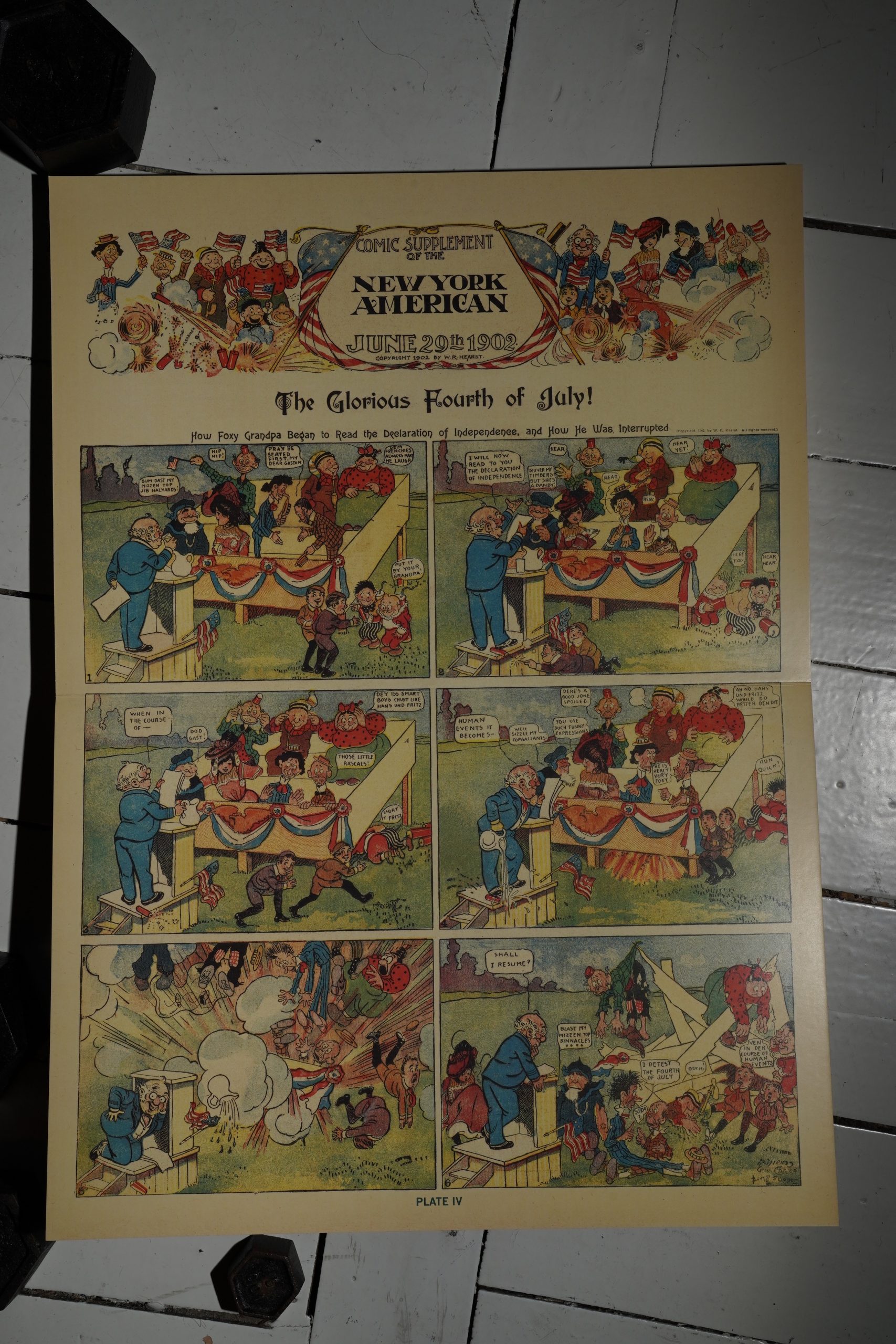 And then… we just get a handful of random newspaper comic strips from about a hundred years before? 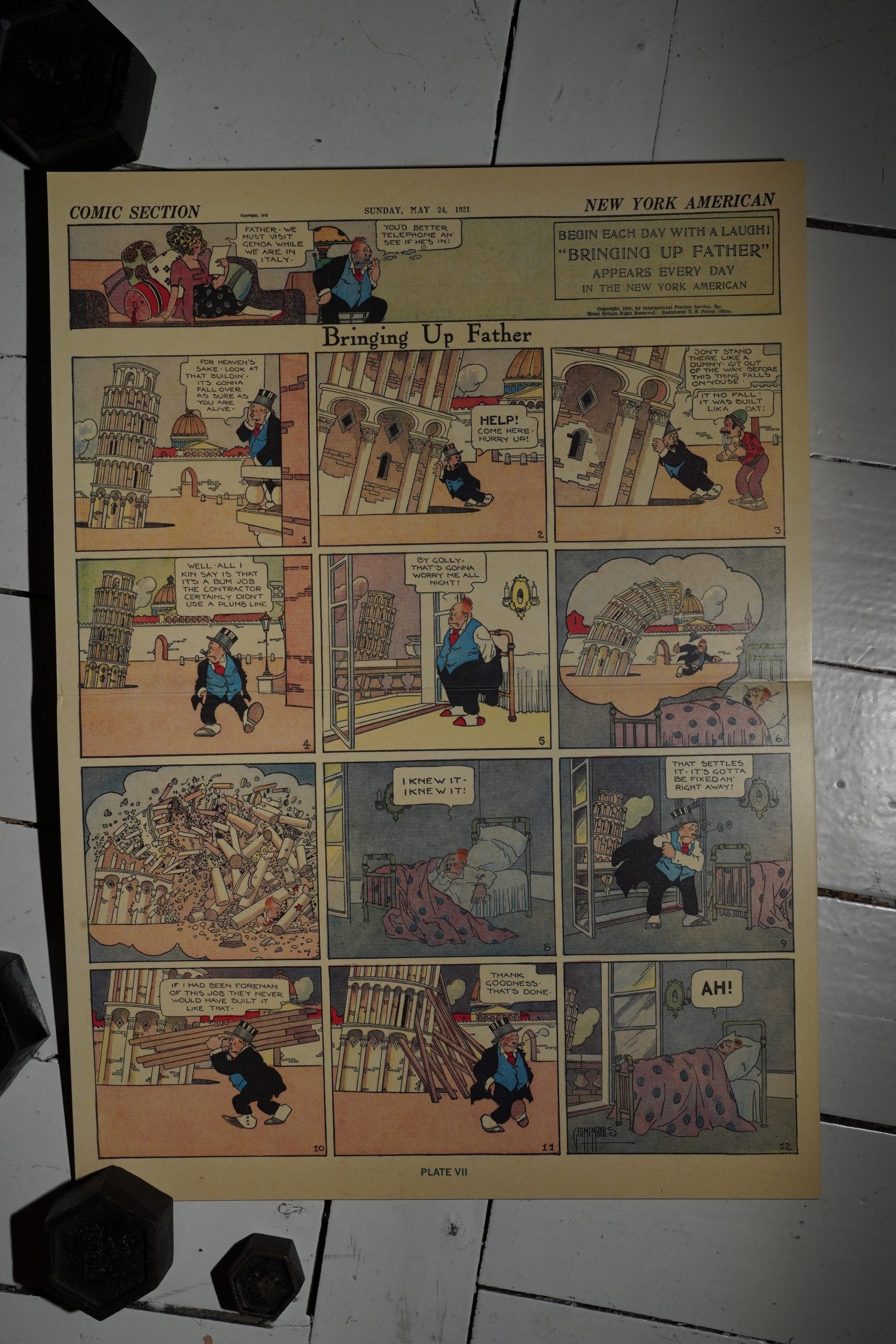 So there you go. I hope I didn’t say anything scandalous. I’ll leave that to Noah Berlatsky, in his In the Shadow of No Talent article about the book, from his phase where he seemed to try very hard to become disliked by all the “serious” people in comics:

The latest cultural artifact to go rummaging for meaning and runaway sales amidst the charred bones of the World Trade Center is cartoonist Art Spiegelman’s “In the Shadow of No Towers.” Spiegelman knows first-hand about the profitability of tragedy — his most famous book, Maus, was based on his father’s experiences in the Holocaust, and was an unexpected and enormous commercial success. That was twenty years ago, however. In the intervening time, Spiegelman has edited some anthologies, written a mediocre children’s book, drawn some New Yorker covers, and generally rested on his reputation as the man who made art comics a (potentially) mass market genre.

Even with all these distractions, however, Spiegelman couldn’t quite grind out a book’s worth of material. Almost the second half of “In the Shadow of No Towers” is devoted to reprints of early full-page strips from the dawn of the medium.

I’m not sure, but I think this is a negative review:

As Spiegelman struggled to come to terms with the losses of Sept. 11, he lost himself in nostalgia for an irretrievable era in his art — the Old World of comics — much as his aging father longed for the Europe that had existed before the war.

The Guardian also couches their words:

In the Shadow of No Towers is most compelling as it charts the changing memory of 9/11. The last panel shows how time only widens the gap between those who can escape the shadow of 9/11 and those direct trauma victims who cannot.

Here’s a clearer one:

Along with the paltry content, the series — originally published in installments — loses something when collected together. Instead of a build-up, there is overlapping and repetition. Spiegelman’s tone also begins to grate. Overwhelmed by the continuing news and by conspiracy theories, he claims that instead of losing his life, he lost his mind. As with anyone who makes such a claim, it’s melodramatic and corny.