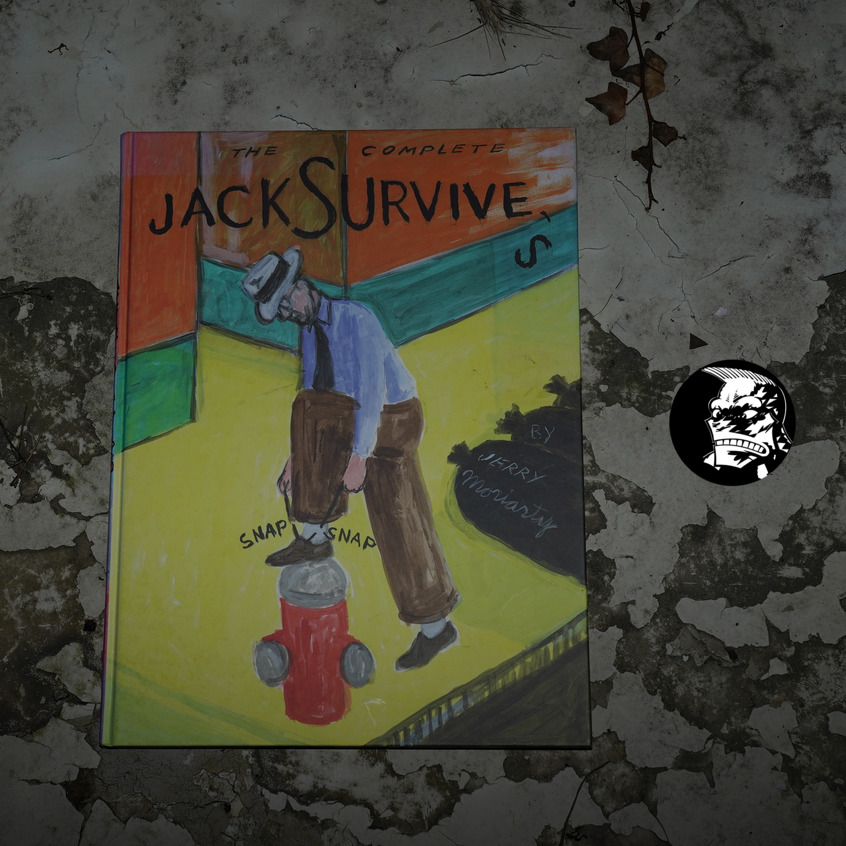 This book was published by the late and very lamented Buenaventura Press, and basically reprints the Raw One-Shot from 84, but adds a few more things. 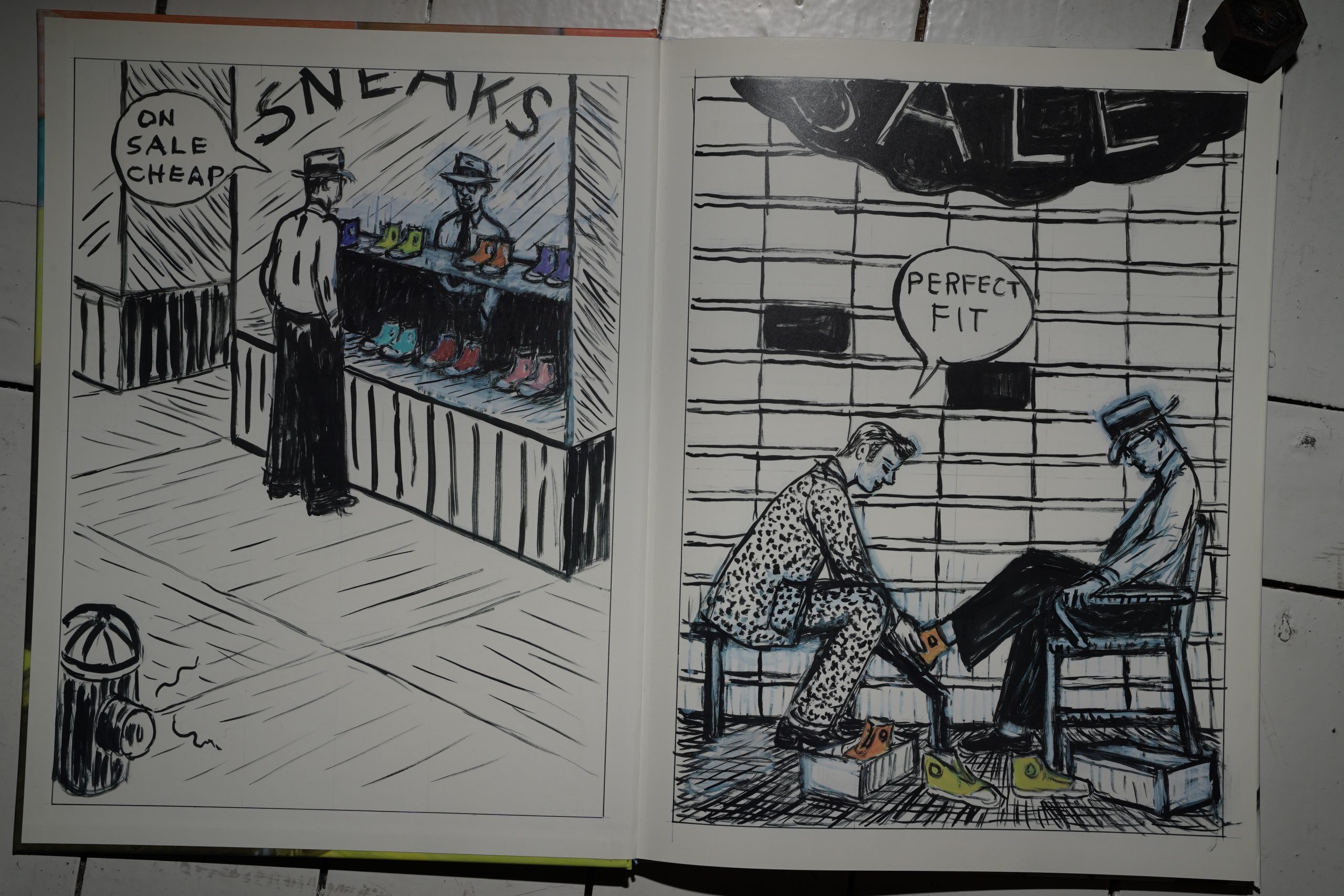 This is in the same format at the first book, but is a hardback and is printed on shiny paper, so it looks less like a mysterious artefact than the original book. 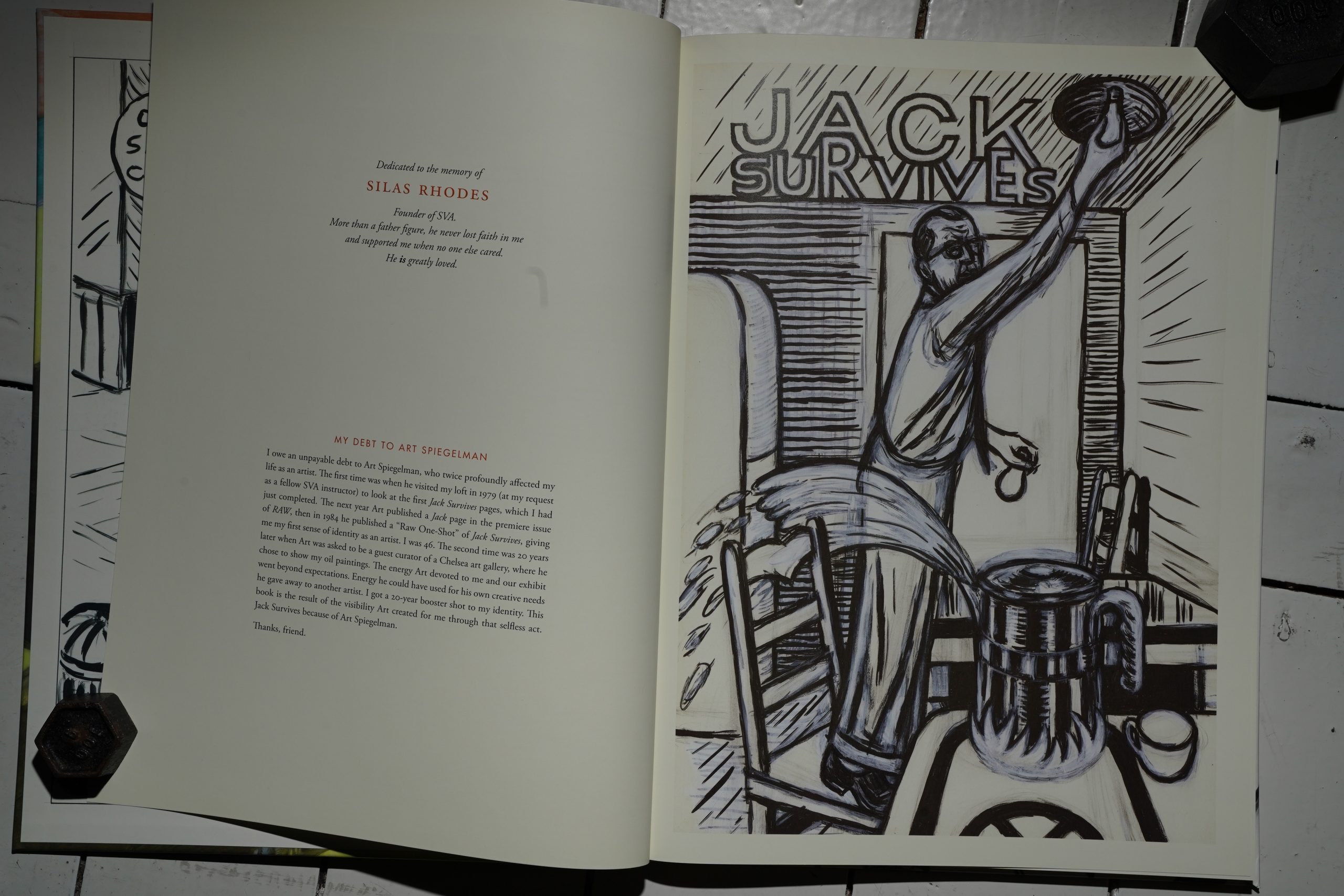 It’s shot (and printed) in full colour, while the original book was in black and white. I’m not sure what all the wispy blueish paint is — is it all white-out? 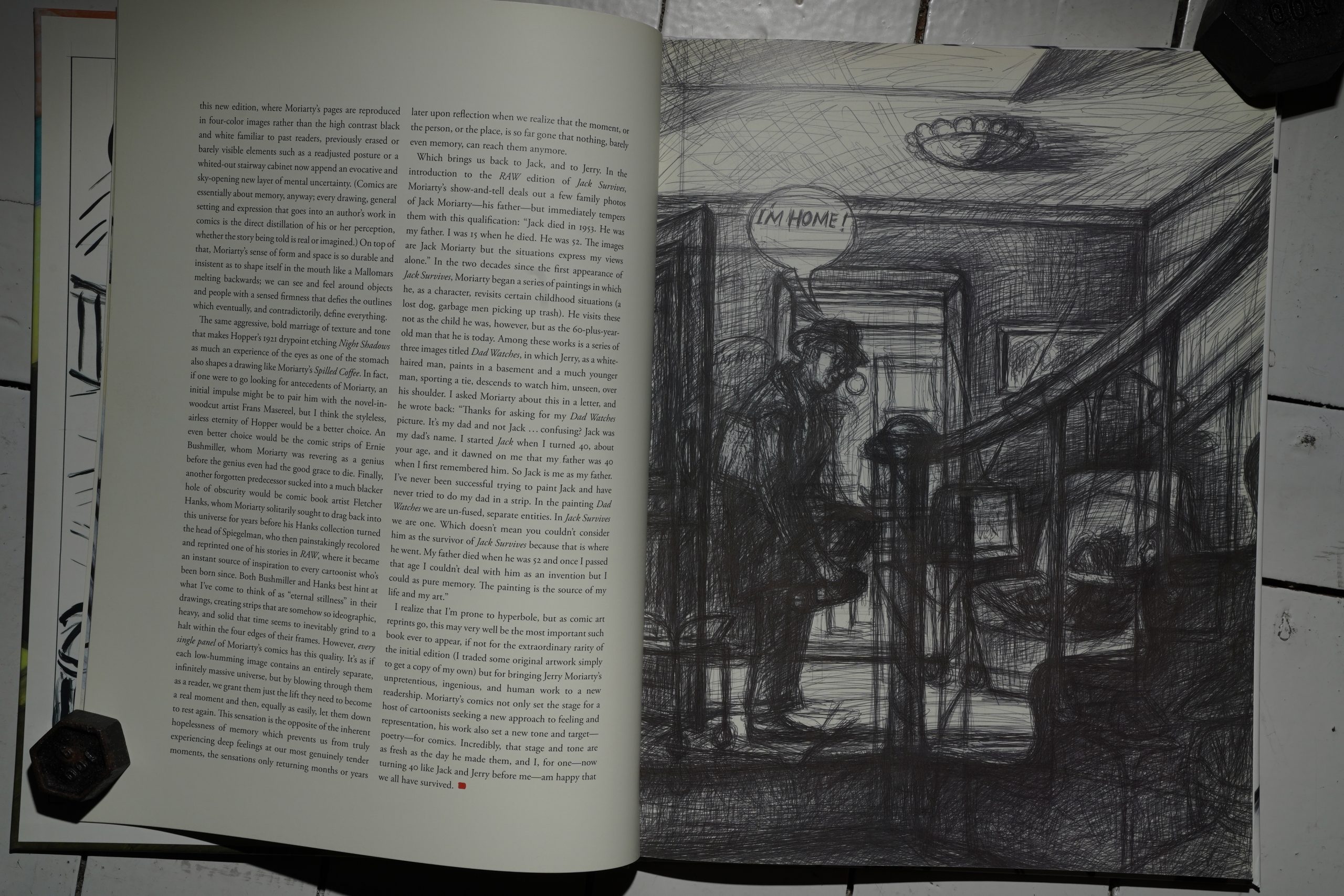 We get two introductions — a short one by Richard McGuire, and a longer one by Chris Ware (who tells us what a genius Moriarty is). I mean, it’s true, but it feels like a hard sell. It’s probably a sound commercial move… 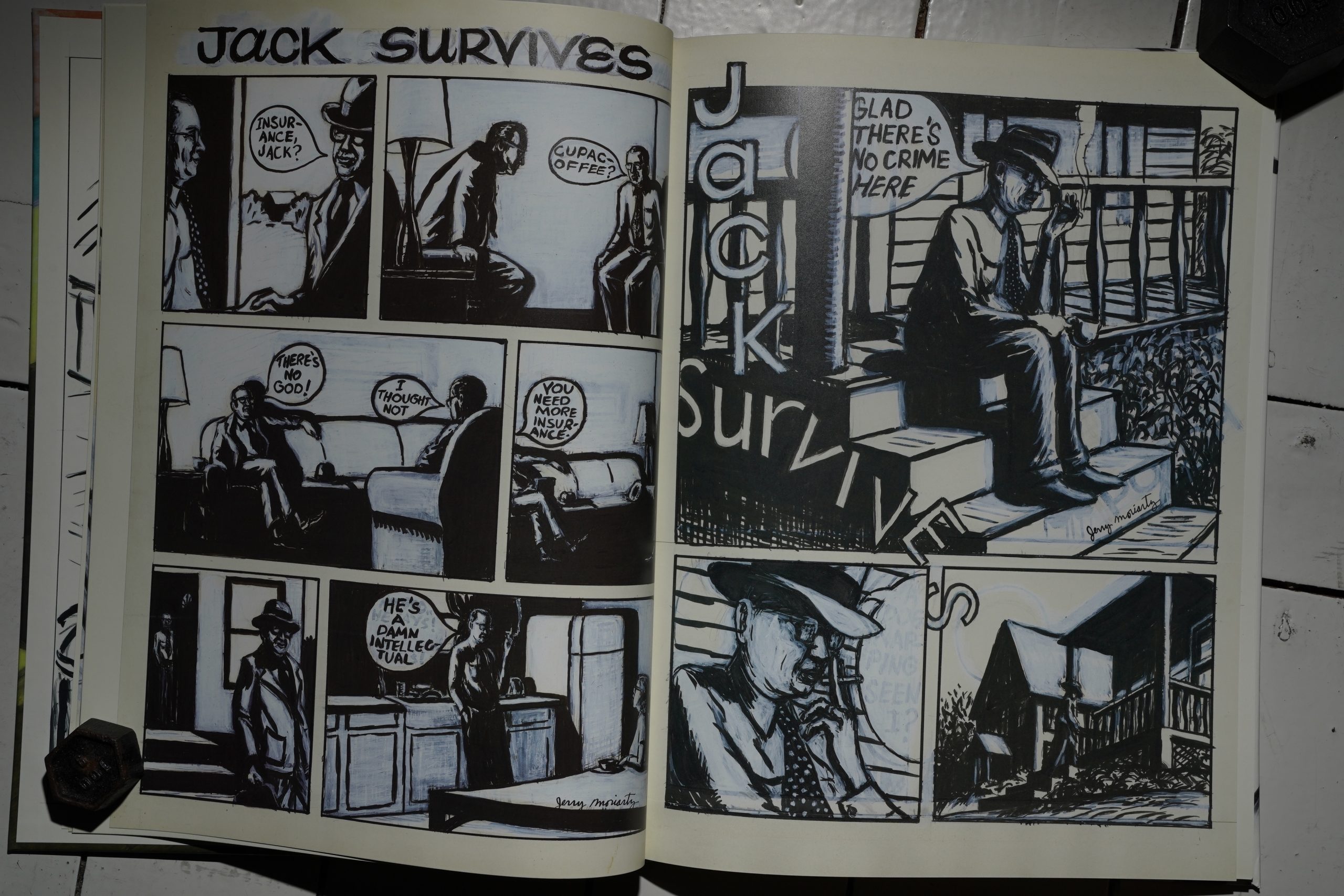 The reproduction here is outstanding — you can really get way into all the details. However — I think the original, stark black-and-white version of this just had more impact? 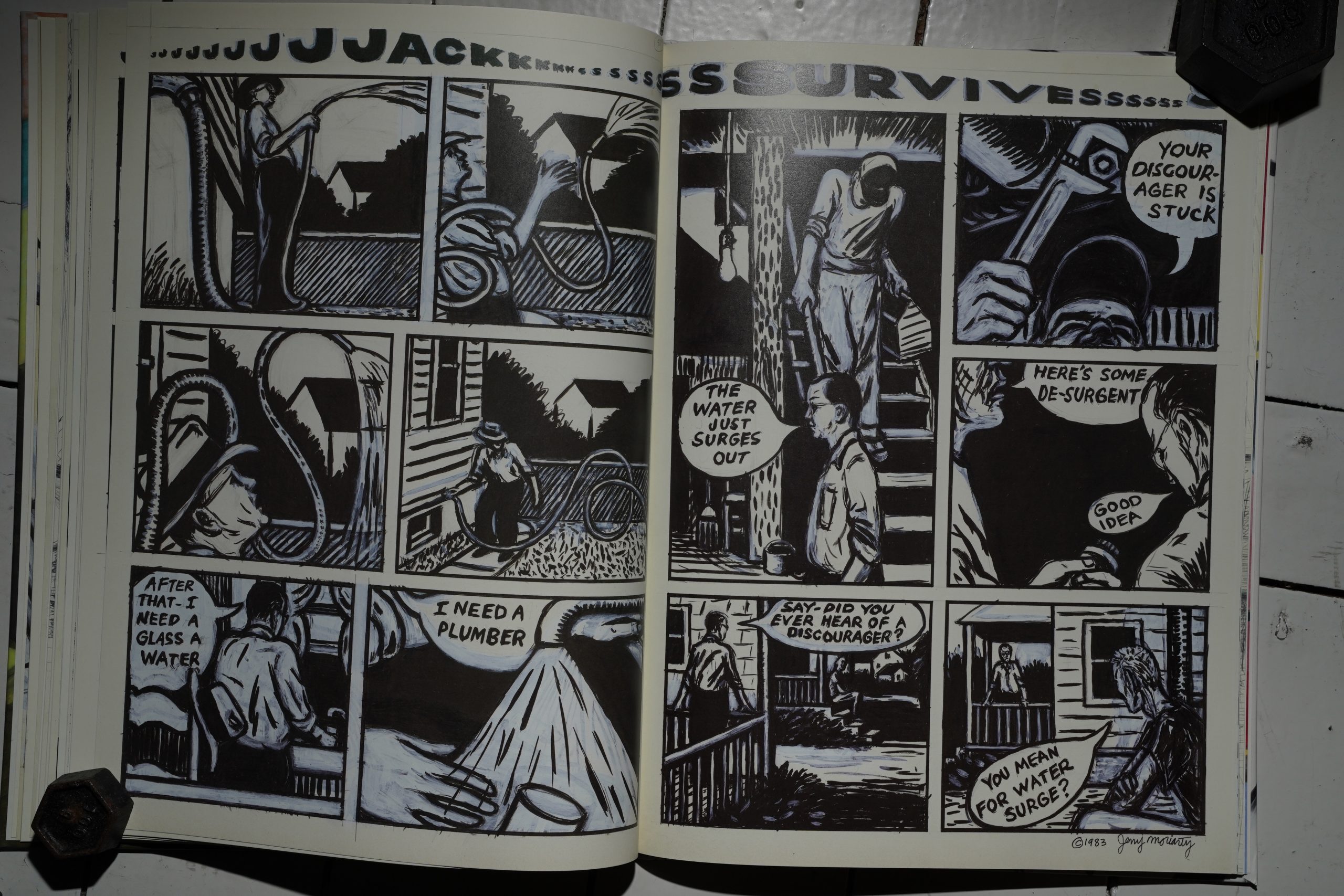 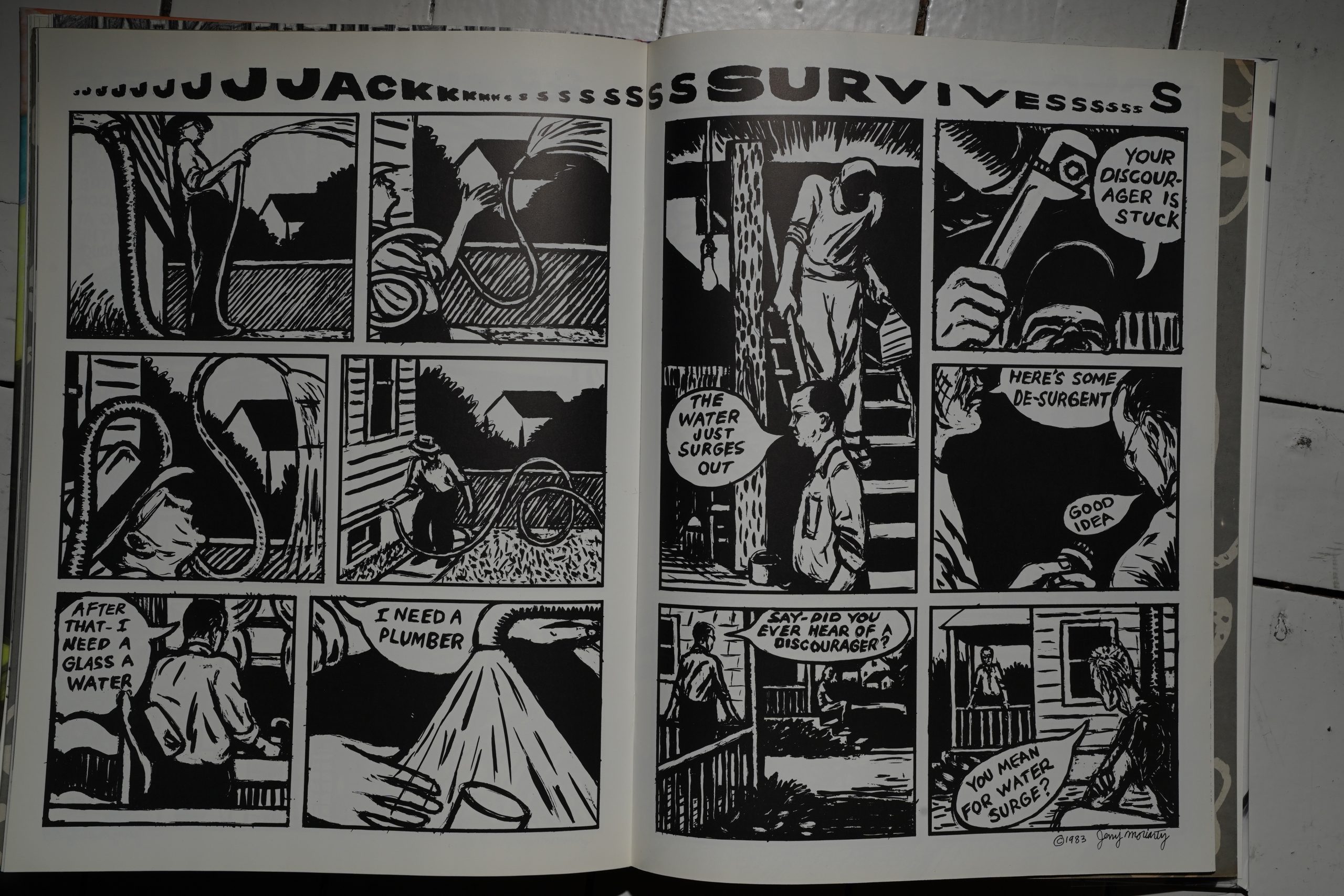 … and here’s the 84 printing. Doesn’t that just grab you more? 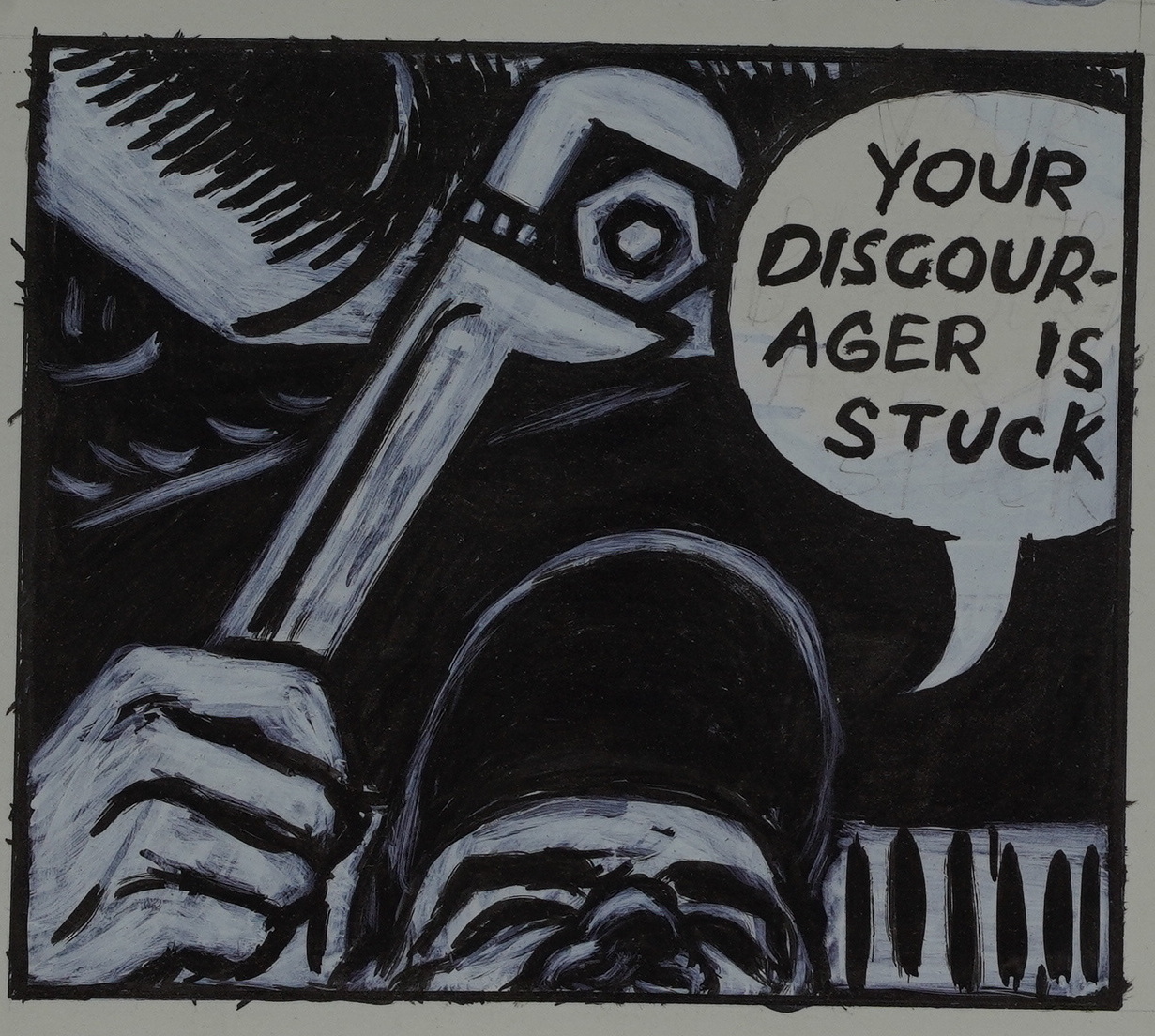 Let’s zoom in on one of the panels… So much detail! He’s really slathered on the blue/white paint here (white-out?) that it’s difficult to imagine that this was really meant to be reproduced in black and white. 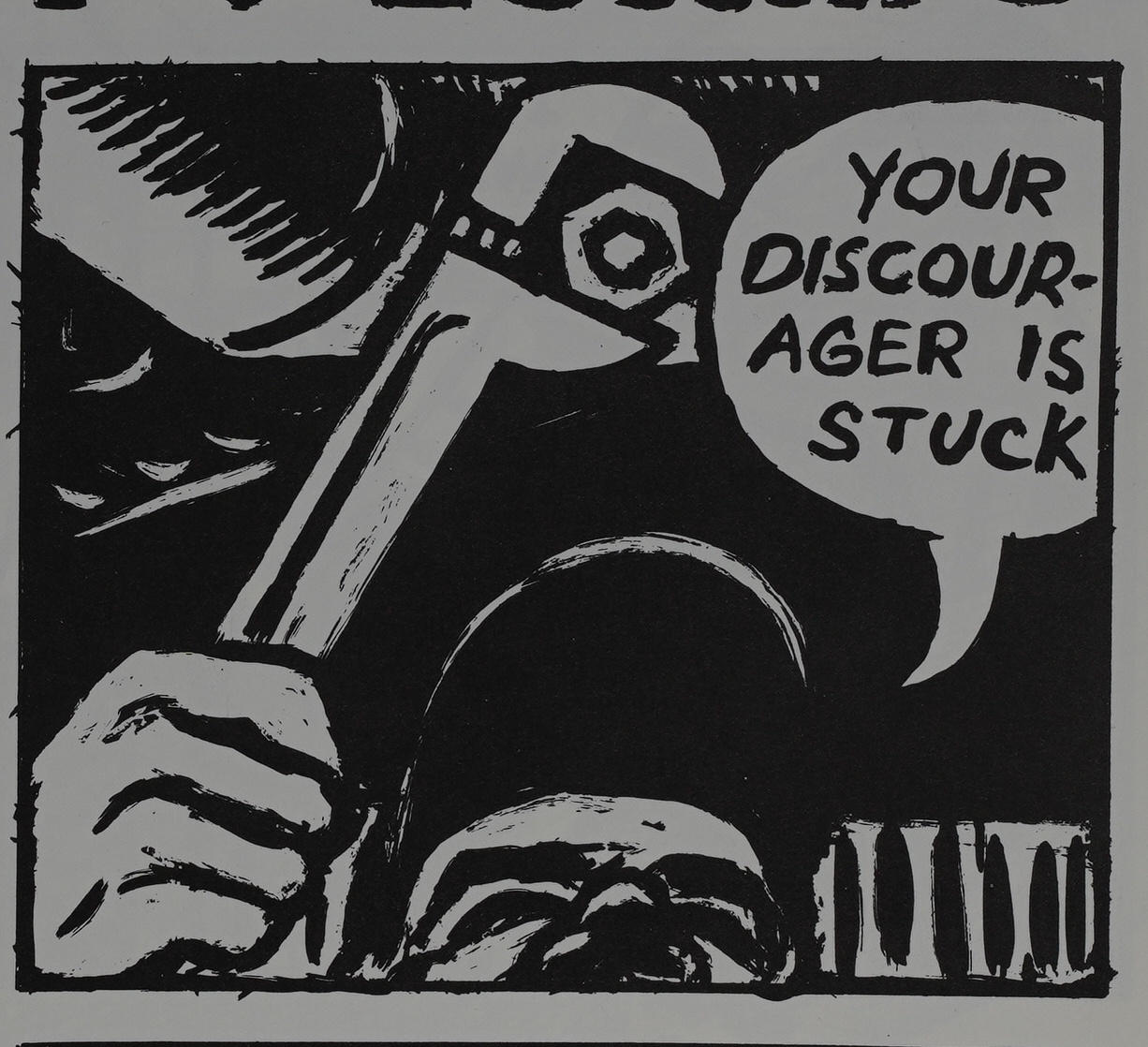 OK, enough of this quibbling — the strips are still great, and it’s a fabulous book. 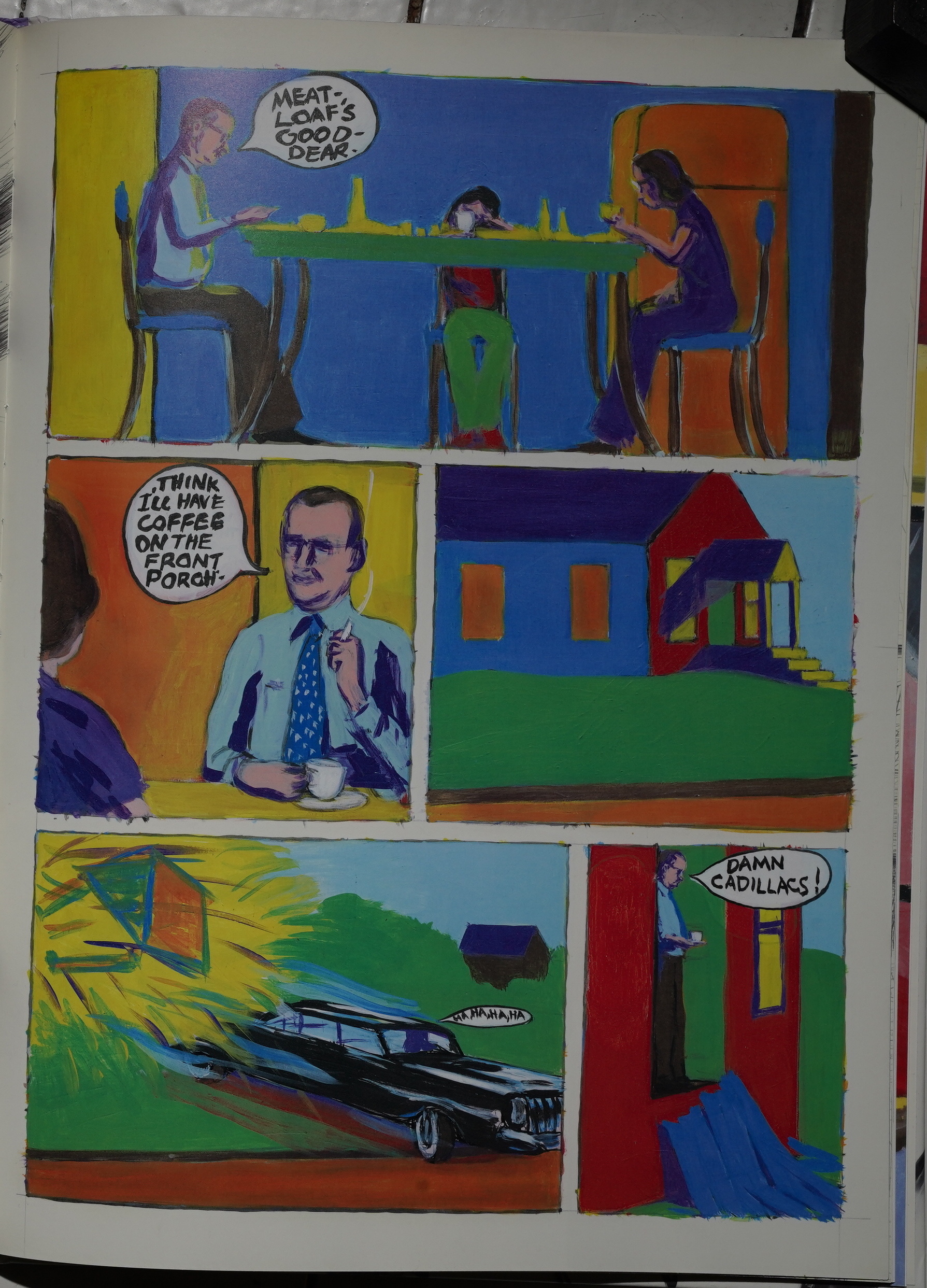 It also feels very generous — we get a bunch of newer pieces to, and that feels like discovering a new treasure trove. 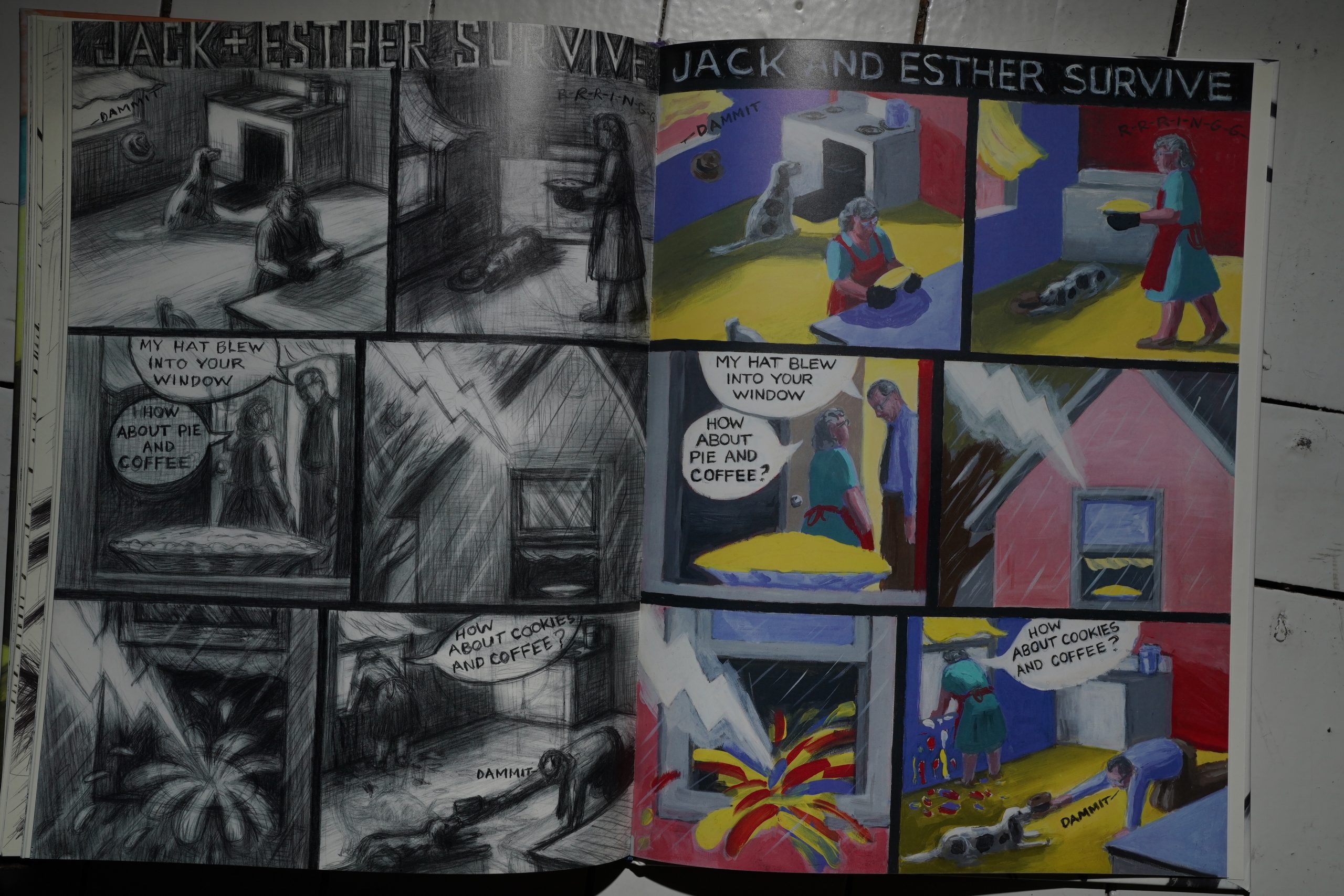 Amazing book from a fantastic artist.

Hey! These people agree with me!

The first version of this book was a ‘Raw One Shot’ in 1984, printed in flat, contrasting black and white. Few people reading this volume will have seen it, but there is a focus and directness in that version that is missing here. Whereas the original version simply presented large format comics, this version is more of an ‘Art of’ book. The colour reproduction of these pages, which are so layered and worked over, is undeniably gorgeous, allowing you to see the original art photographed as is, in blue, black, greys and whites drawing the eye in and around the layers of ink and paint. But there is a distracting quality to that detail which makes the artwork itself almost more important than its subject matter. It might have been better to choose a few strips for this treatment rather than present the whole volume this way, particularly as there are plenty of pencil drawings, unfinished sketches and paintings included which provide a good overview of Moriarty’s style.

Richard McGuire provides a brief preface while Chris Ware offers effusive praise in his introduction.[1] In it, he claims this volume as the “most important” comic art reprint to ever appear. Ware admits a tendency to hyperbole, and I must call “hyperbole” on the statement. Is this volume more important than Krazy Kat reprints (to name just one title that comes to mind) ? This is not to denigrate the work itself, it is excellent, just not as amazing as Ware would have you believe.

It was reviewed a lot at the time:

[…] this year brings The Complete Jack Survives, every strip, drawing and painting meticulously re-mastered to expose their full tonal range and previously little-seen under-drawing, and under-writing (“A dog napping seen I?” surfaces in an empty speech balloon), alongside tender photos and commentary. “My father has had time to become almost mythology to me, so Jack grows more poignant in my old age as I fuse myself with my Dad. 55 years after his death we survive.”

One thought on “PX09: The Complete Jack Survives”