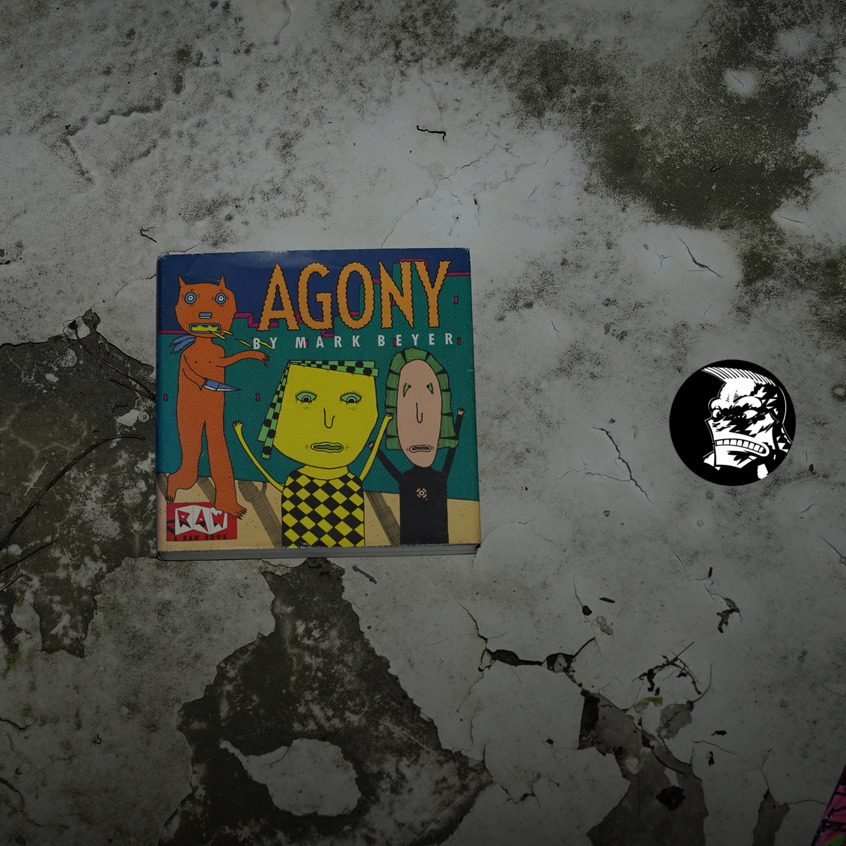 I have two copies of this book — one that I bought in 87, and one I got about a decade ago. Mile High Comics were having a blow-out graphics novel sale, and they apparently had so many copies of this book that they were selling it for $5, so I… randomly bought another copy. Why? It’s a mystery to me, too. 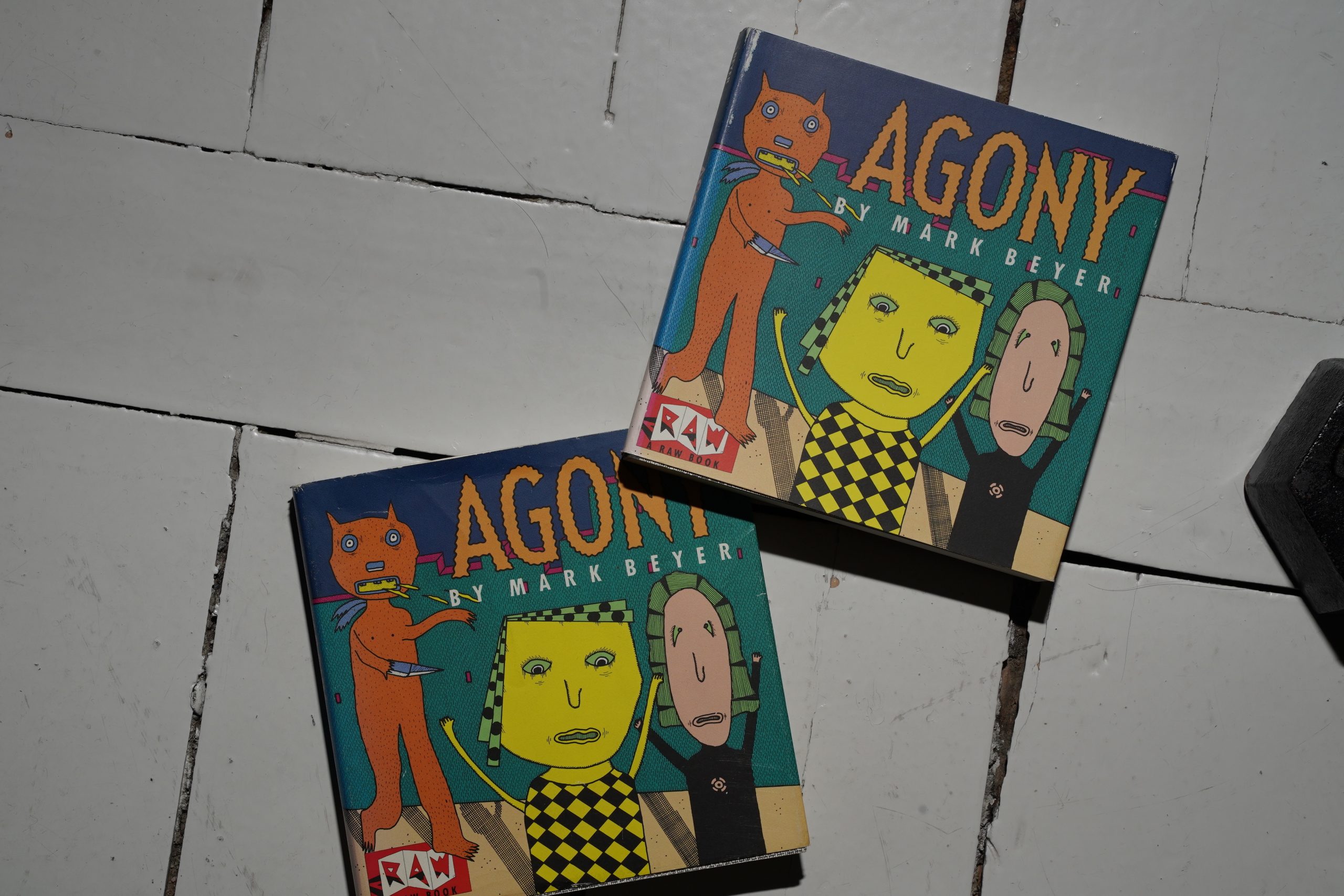 It just seemed wrong that they were selling it for $5?

So I was somewhat surprised that the first book New York Review Comics published was a new edition of this book, because I thought this must mean that everybody who wanted a copy had a copy, but apparently not? Perhaps it just means that there’s virtually no cross-over from comic shop crowds (who had tons of copies) to the bookstore audience (who were apparently craving a copy). 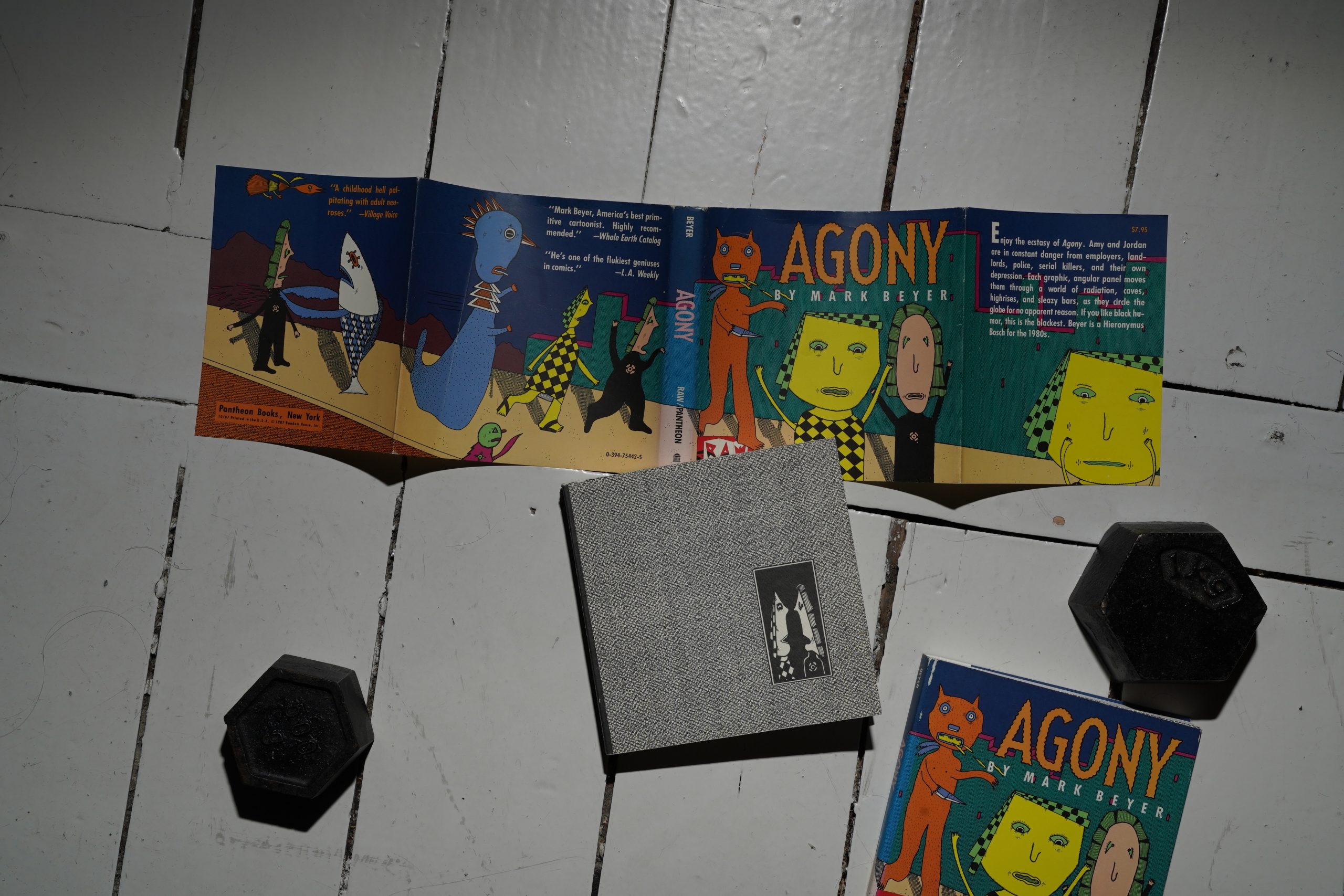 The book has French flaps , and the inner book itself is in black and white. 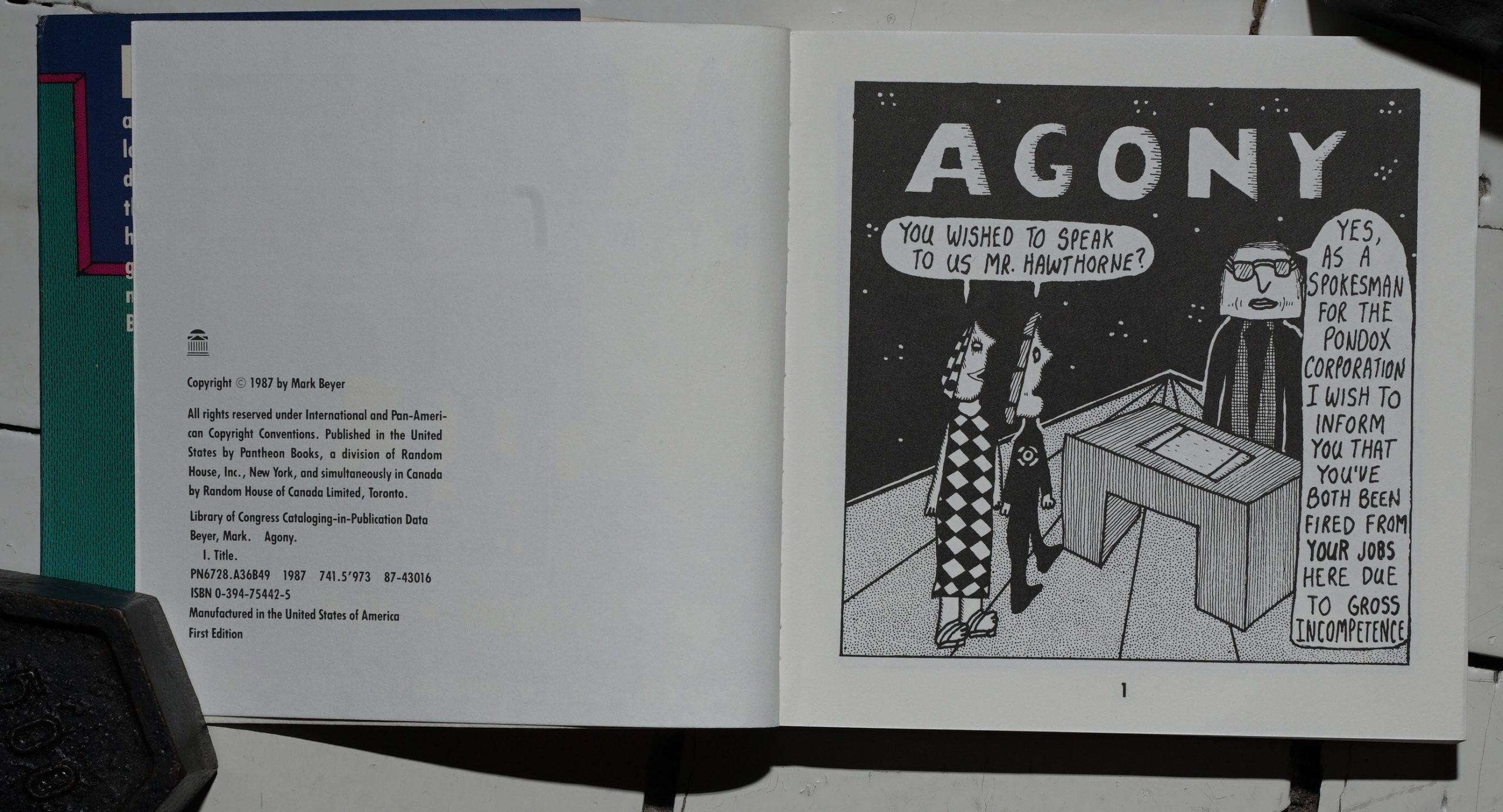 Oops! I just totally crashed Emacs while typing this blog post, so now I have to re-type it… and I hate that. So this is going to be even shorter than ususal!

This book is basically one panel per page, so it’s a brisk read. 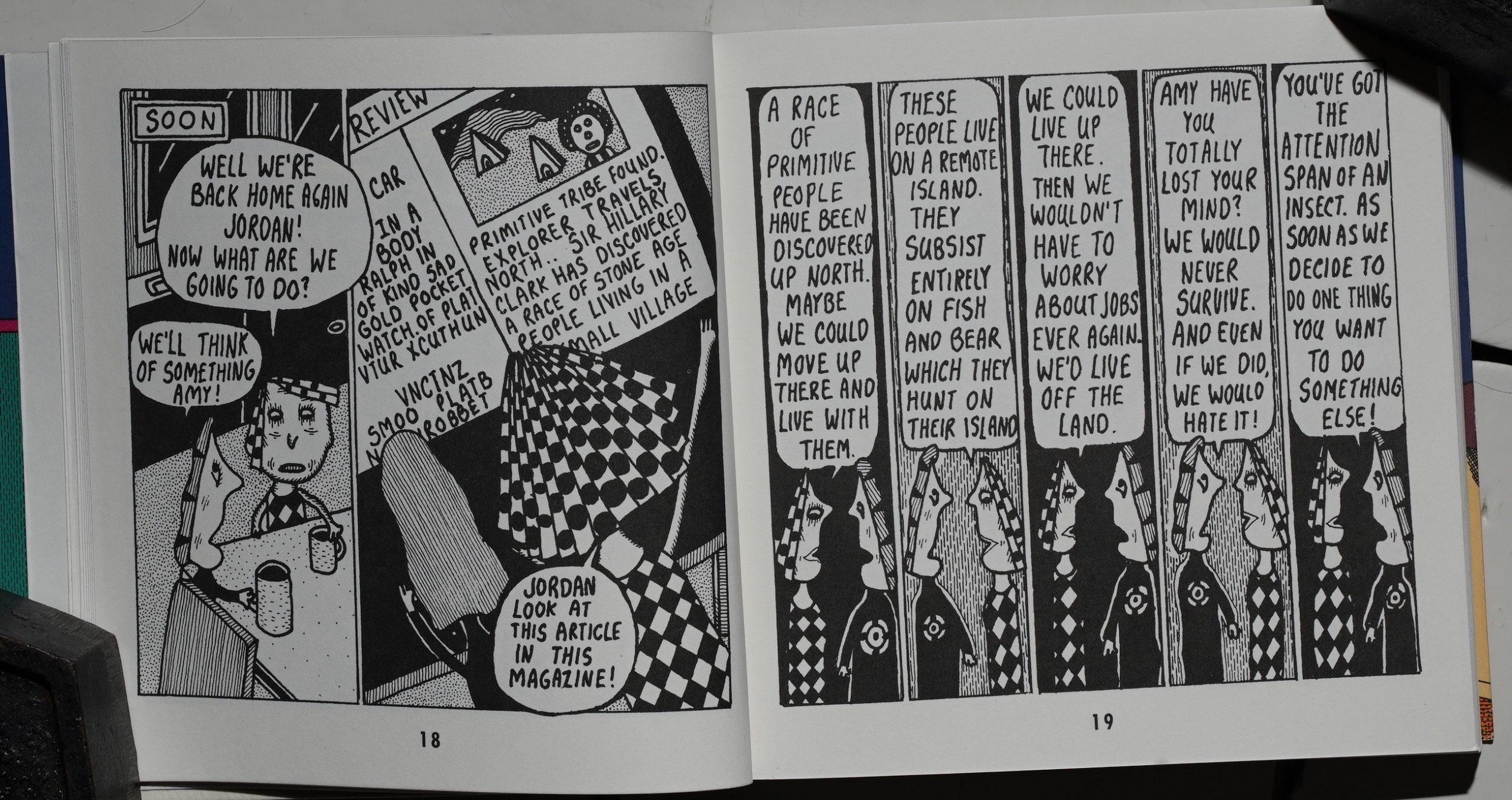 The storyline follows the usual Amy + Jordan structure, where things start out bad, get worse, get a bit better, and then get a whole lot worse. 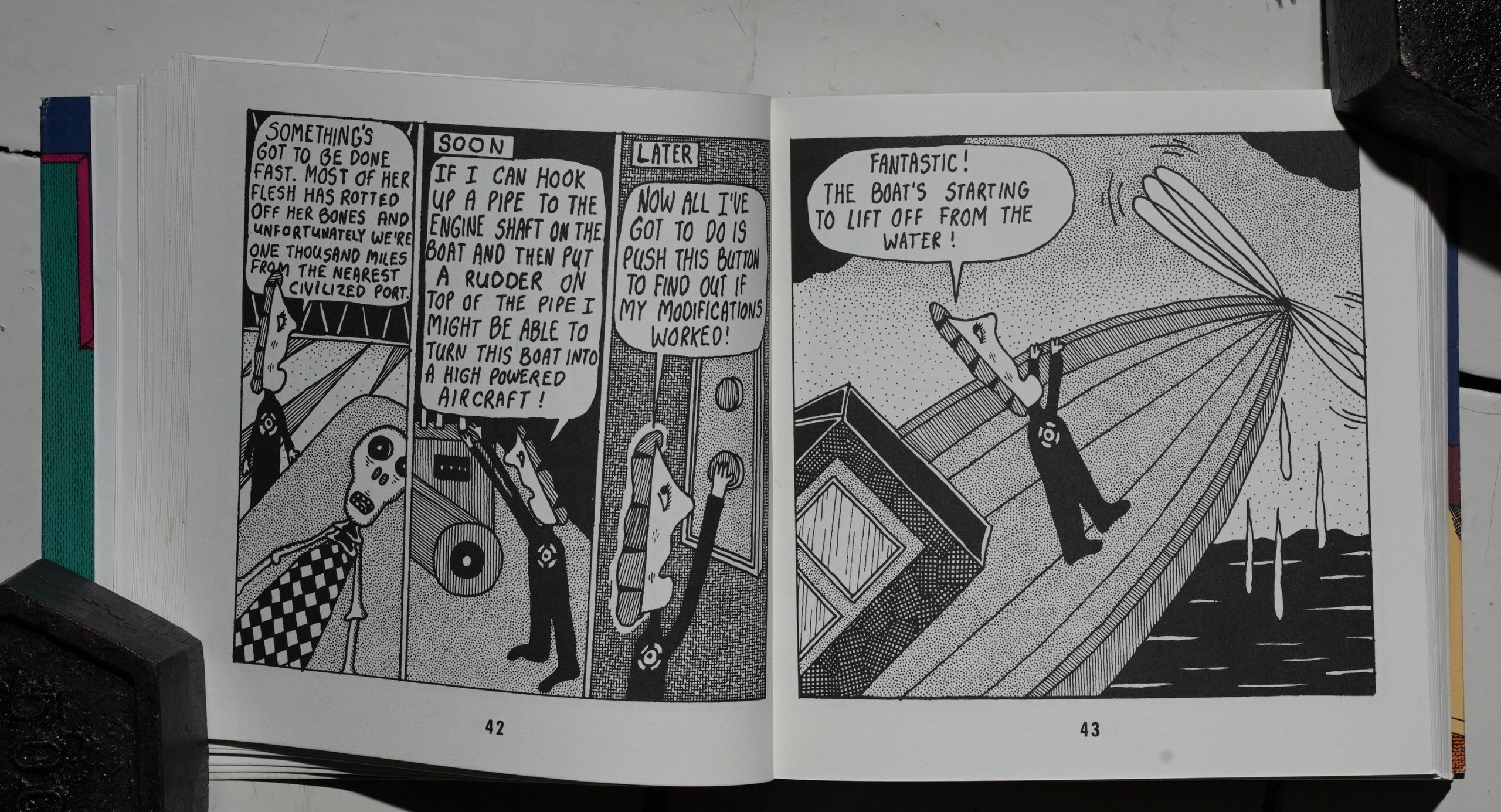 There’s a bit more whimsy in some of this than usual, though. 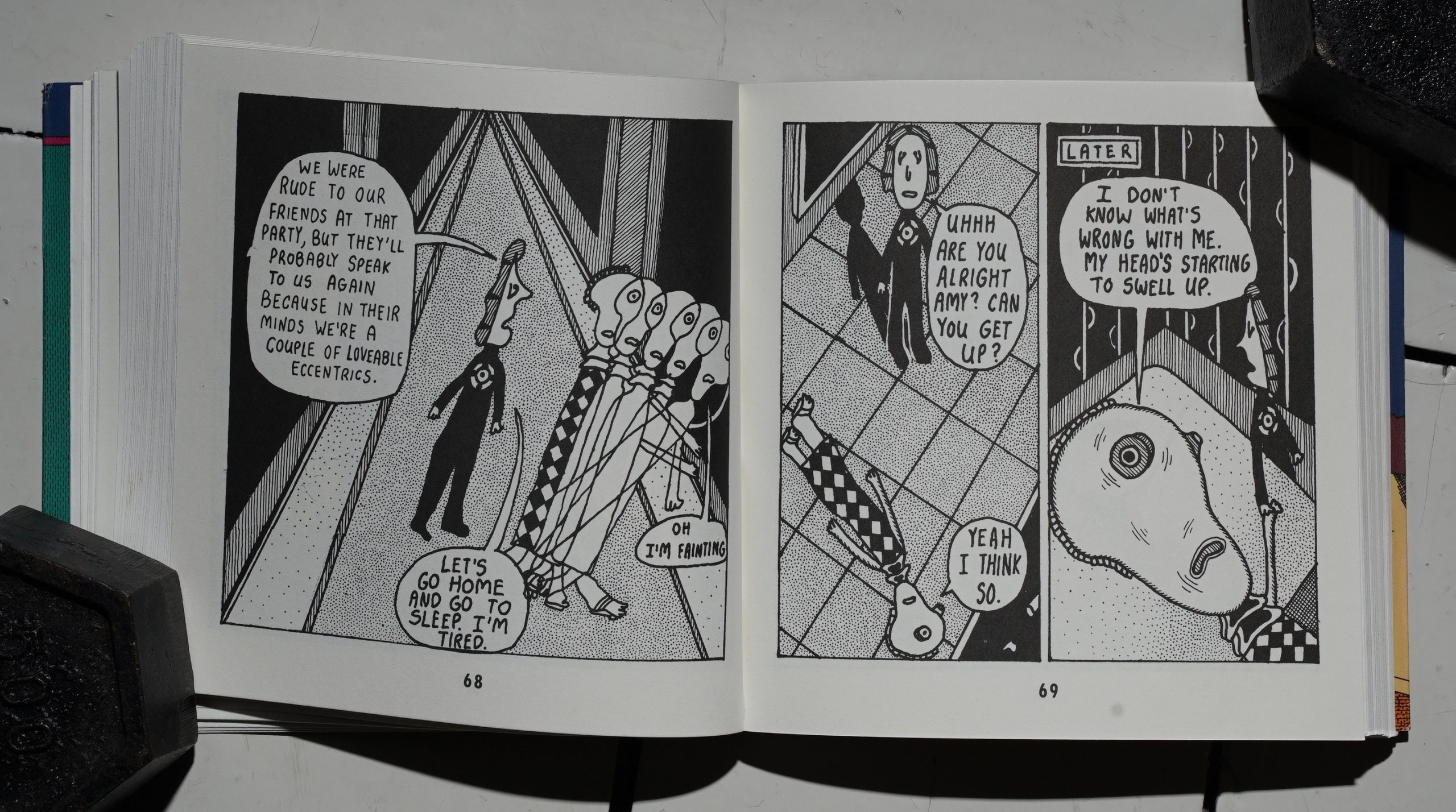 Some parts of this story feel very familiar — I’m pretty sure I read this bit over the past few months? So is this a collection of Amy + Jordan strips with parts edited out and new stuff added? 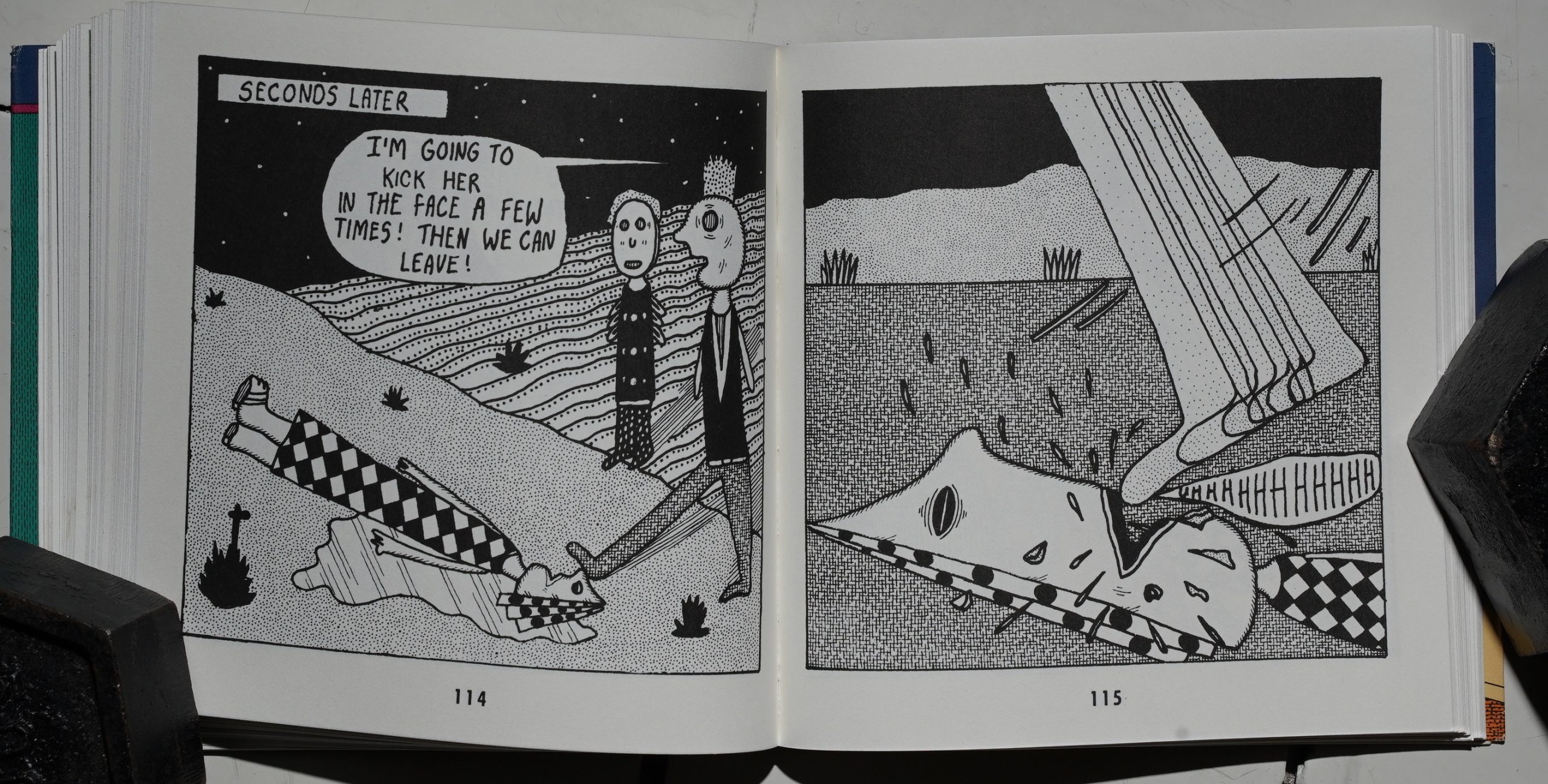 It’s amazing how viscerally horrifying Beyer manages to make some of this stuff.

I loved this book when I was 18, and it’s still a powerful read.

Pantheon has also published Mark
Beyer’s Agony, a 173-page M)rk in a
5″ by 5″ format. As edited and
designed by spiegelman/Mouly, this
edition Of Agony features one large
panel per page and comes complete
with a beautiful colored dust cover.
The copy on the inside front leaf in-
vites the reader to “enjoy the ecstasy
of Agony” (ho ho) and describes Beyer
as “a Hieronymous Bosch for the
1980s.”
Beyer has perfected a primitivist
drawing style that, in its odd distor-
tions of perspective and caricatural
representations of human beings, pro-
vides a remarkably consistent frame-
work for the adventures of Beyer’s tuo
hapless child protagonists, Amy and
Jordan. A storytelling pattern estab-
lished in earlier Amy/Jordan strips
(which appeared in RAW’ and the self-
published Dead Stories) is carried to
further extremes in Agony: Amy and
Jordan are swept along from one
unhappy incident to another, in a
downwardly spiralling sequences of
misfortunes that is unending. (The
conclusion of Agony implies a con-
tinuum.) The sheer excess of bad for-
tune that befalls Amy and Jordan is
itself a source of humor. And the story
itself features the kind of ridiculous
grotesquerie that seems itself the in-
vention of children (‘tind then a ghoul
rips Amy’s head off and throws it in-
to a fish tank. where the fish swallows
her head. Trying to save her head, Jor-
dan gets suallowed by the fish and has
his legs bitten off..
Some
unknown gods have it in for these two
naifs. and our response to each new
cataclysm is a growing inclination
toward laughter, albeit a disturbed
laughter. What happens during this
story turns out so much worse than
one could possibly expect that Agony
becomes a tragicomic epic outlining
the terms of a harsh, unforgiving
reality.
Within the framework of this
childrens• nightmare, the images of
catastrophe are often potent. The most
frightening menace they face is death
by radiation poisoning: Amy’k skin
melts away, and she starts vomiting
blood. As I once noted in a review of
Beyer’s Dead Stories (which includ-
ed the first 81 pages of Agony, under
the same title). “the synthesis of com-
edy and horror here is managed with
such unblinking attention to the
degradation of Amy’s human form that
the piece becomes a fascinating study
in the meaning of the macabre itself.”
There are also chilling, despairing
refrains from the characters at dif-
ferent intervals of the story. When Jor-
dan expresses his anguish by sayipg
things like “Nothing means any-
thing!” or “Whatever you do in life,
it ultimately makes no difference,”
these are simultaneously satirical
caricatures of existential angst and—
on some different level—authentic ex-
pressions of it. The overall effect is
one of a lavish, comic grotesquerie,
in the mode of a French guignol aware
of its own macabre implications. Even
the playful sequences, like the one in
which Jordan saves Amy’s life by im-
provising an ingenious way to make
a boat fly. ends in a comic cataclysm:
Jordan makes a crash landing into the
airport waiting room. Agonv is like a
modern Greek tragedy written by kids
with an intuitively subversive sense of
humor.

Ah, right — the first half of this book is taken from Dead Stories, which Beyer self-published a few years earlier.

As I said up there — New York Review Comics has reprinted it, so there should be even more copies available now.

It was extensively reviewed:

Beyer is able to capture late 20th century angst and anxiety – urban or otherwise – in such pitch perfect fashion that it’s a shame he hasn’t found more places to publish or an audience more accepting of his dark comedic viewpoint. Here’s hoping the re-release of Agony Beyer affords him the opportunity to get some new comics out to the public. I’d love to see his take on our current, overly plugged-in culture.

When I read Agony, I found the most poignant panel was the one in which Amy, meeting a sea creature, kindly offers it peanuts from the palm of her hand. In almost any other panel, this would be a disaster, but for once in this comic, something doesn’t go wrong, and though she may be feeding a monster Amy has a moment of innocent, innocuous pleasure. If we just wait a moment, we’re told, this pleasure will pass, and we’ll feel something new.