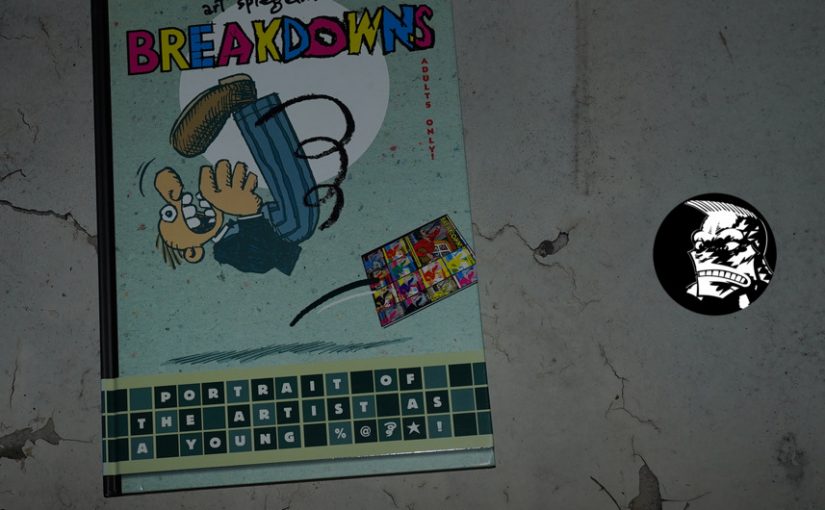 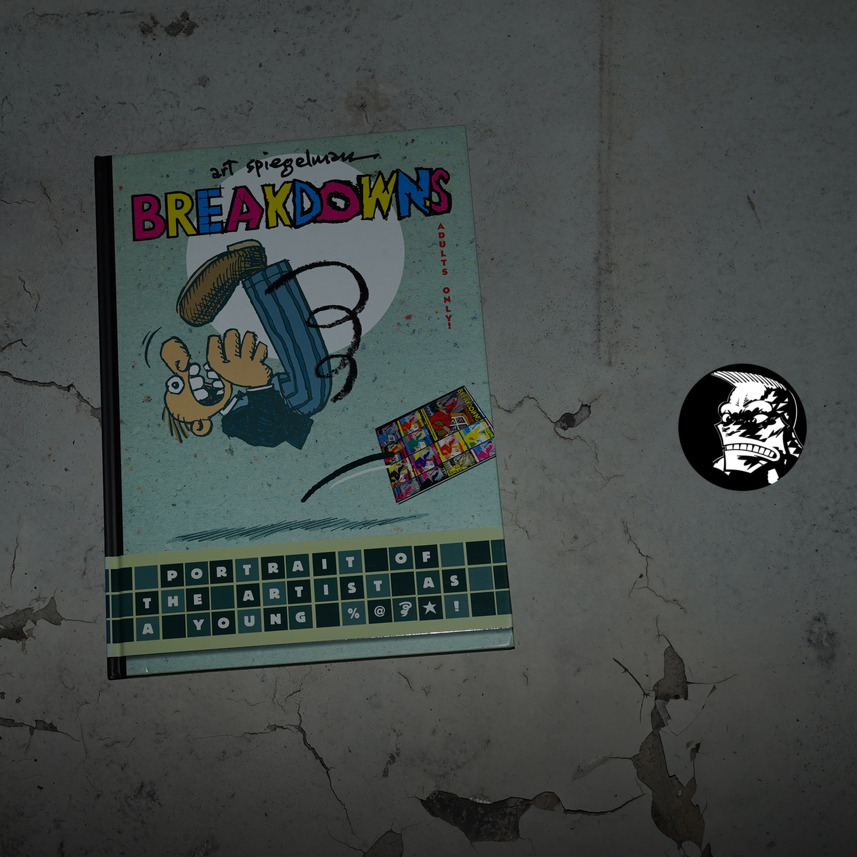 Breakdowns: Portrait of the Artist as a Young %@꩜🟊! by Art Spiegelman (260x363mm) 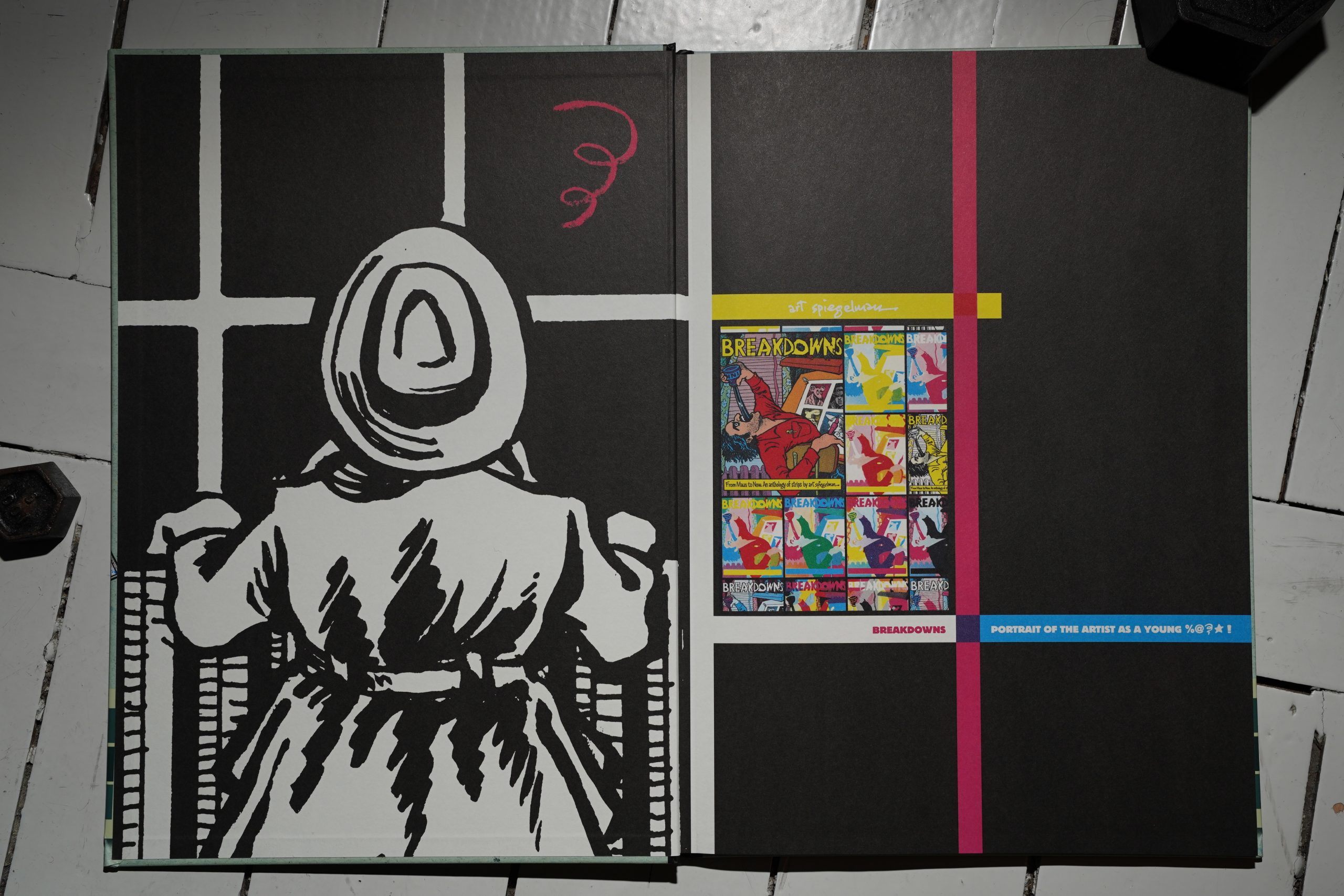 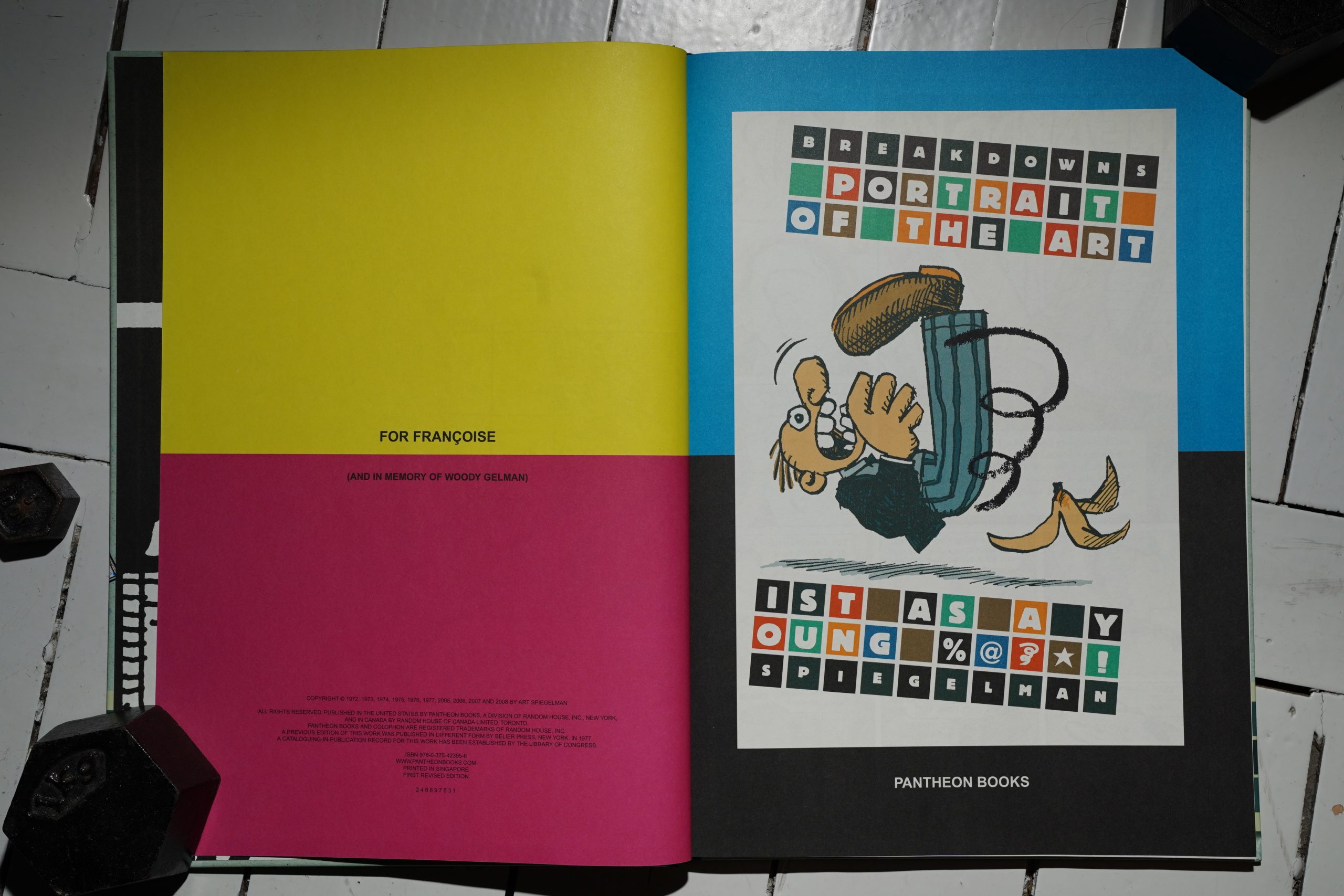 OK, I should probably explain what’s with all this kvetching. I just read the original version of this book, and it was such a thrilling book — a thrilling object.

This book isn’t, and I’m just wondering why: It’s the same format, basically, as the first book: It’s large hardcover book, but it just feels … cheap? It’s so standard! The cover’s got some shiny bits, but… it’s a lot thicker than the original book without having that many more pages. It feels like an ordinary, standard book, while the 77 book was something quite special. 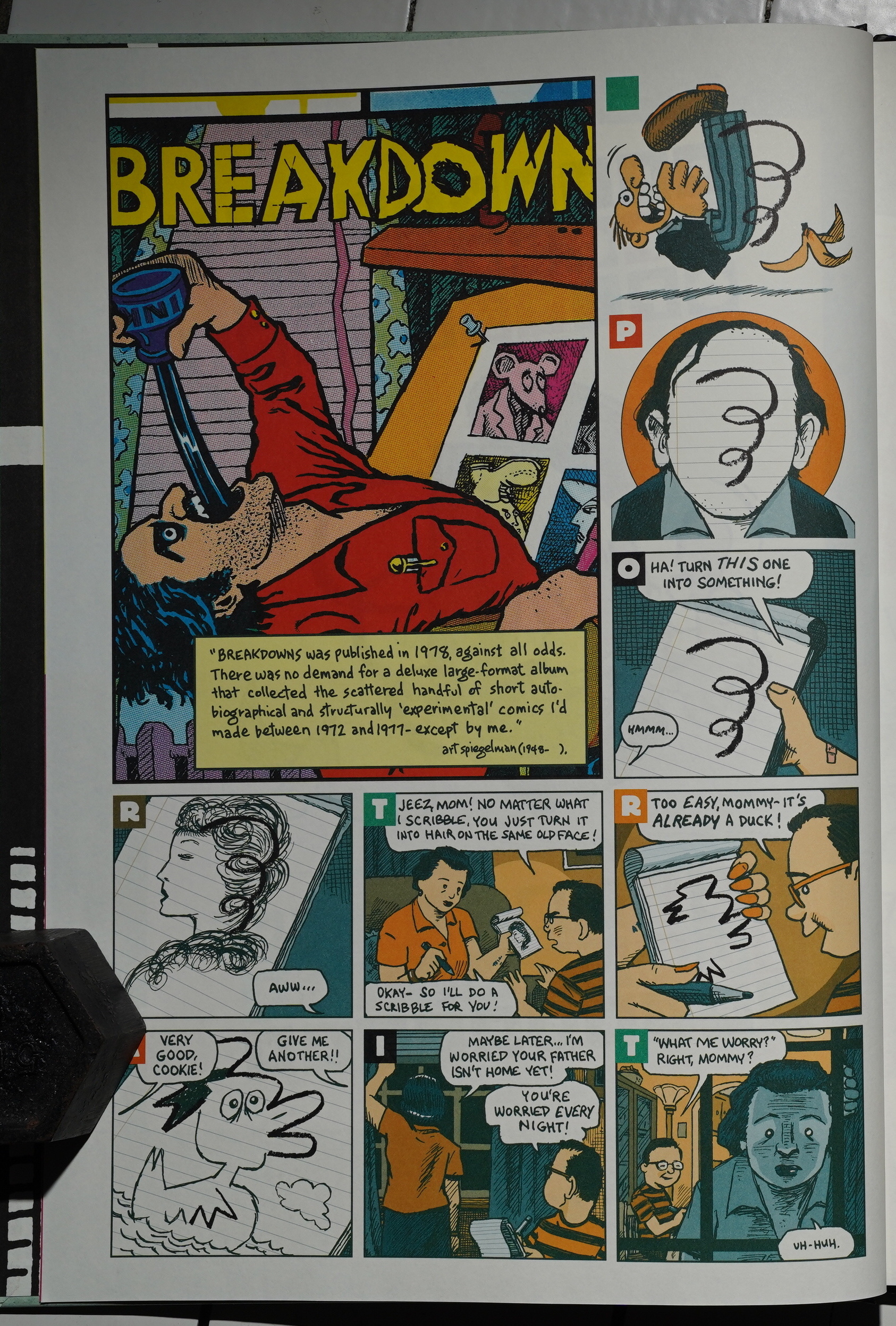 OK, enough with the moaning: This book reprints the 77 book in its entirety, but first we get the story of Spiegelman’s childhood, drawn in this very easy-on-the-eye style. But… kinda… dull… 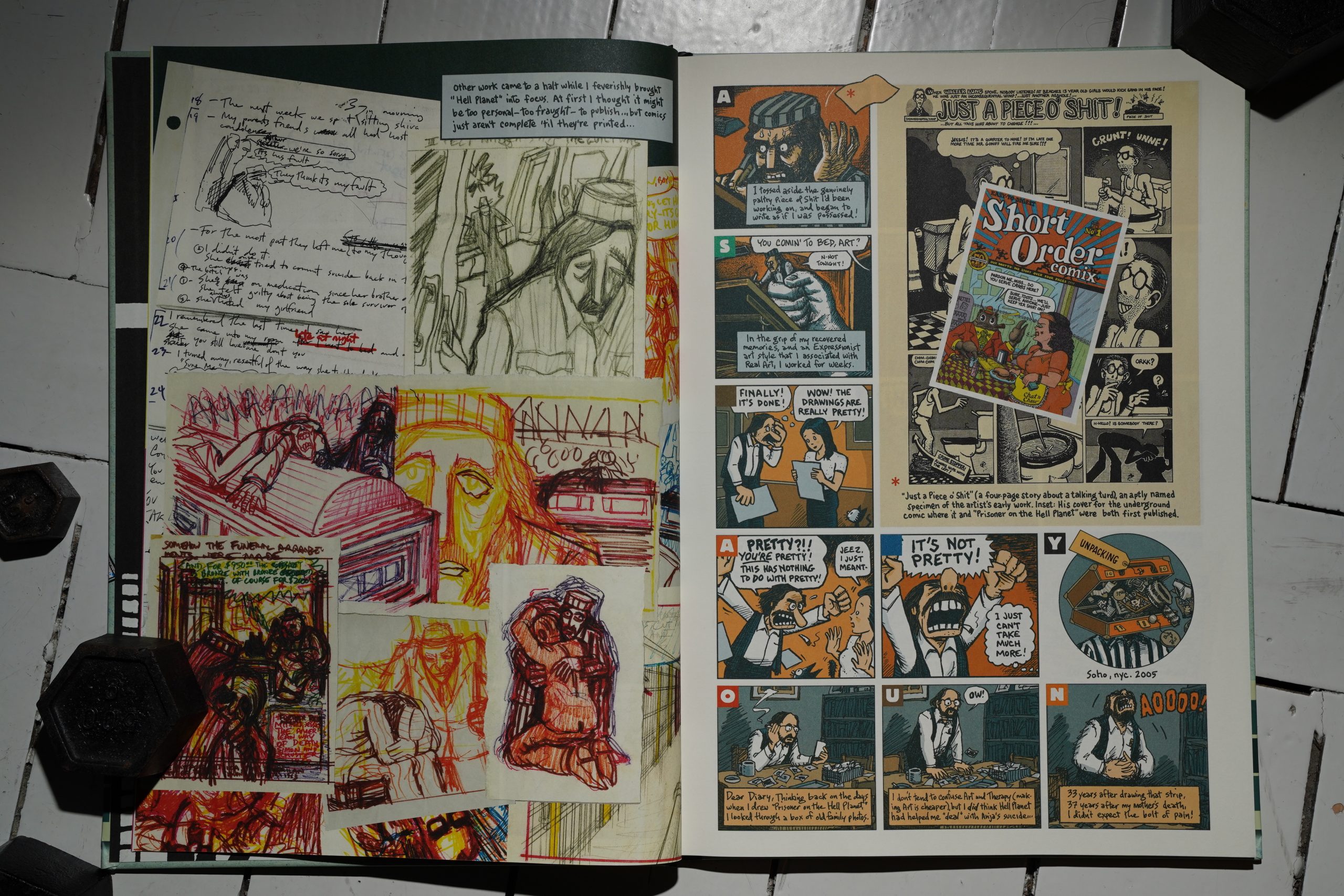 We get a smattering of sketches from around the time, and that’s exciting…

I mean, it’s not that the childhood stuff isn’t interesting or anything, but again, it’s pretty standard. And… Spiegelman comes off as pretty full of himself, and I don’t know whether that’s on purpose or not.

Then we get to the bulk of the book — the reprints. I wondered whether they’d be able to re-do the colour sep shenanigans from the 77 book, so here’s a comparison: The six “covers” to the left are from 77, the six on the right are from 08. They’re not identical — there’s some difference in colour tones — but it’s pretty darn impressive, eh? Some poor soul at Pantheon spent a lot of time on this. Or perhaps Spiegelman still had the seps in his archive? 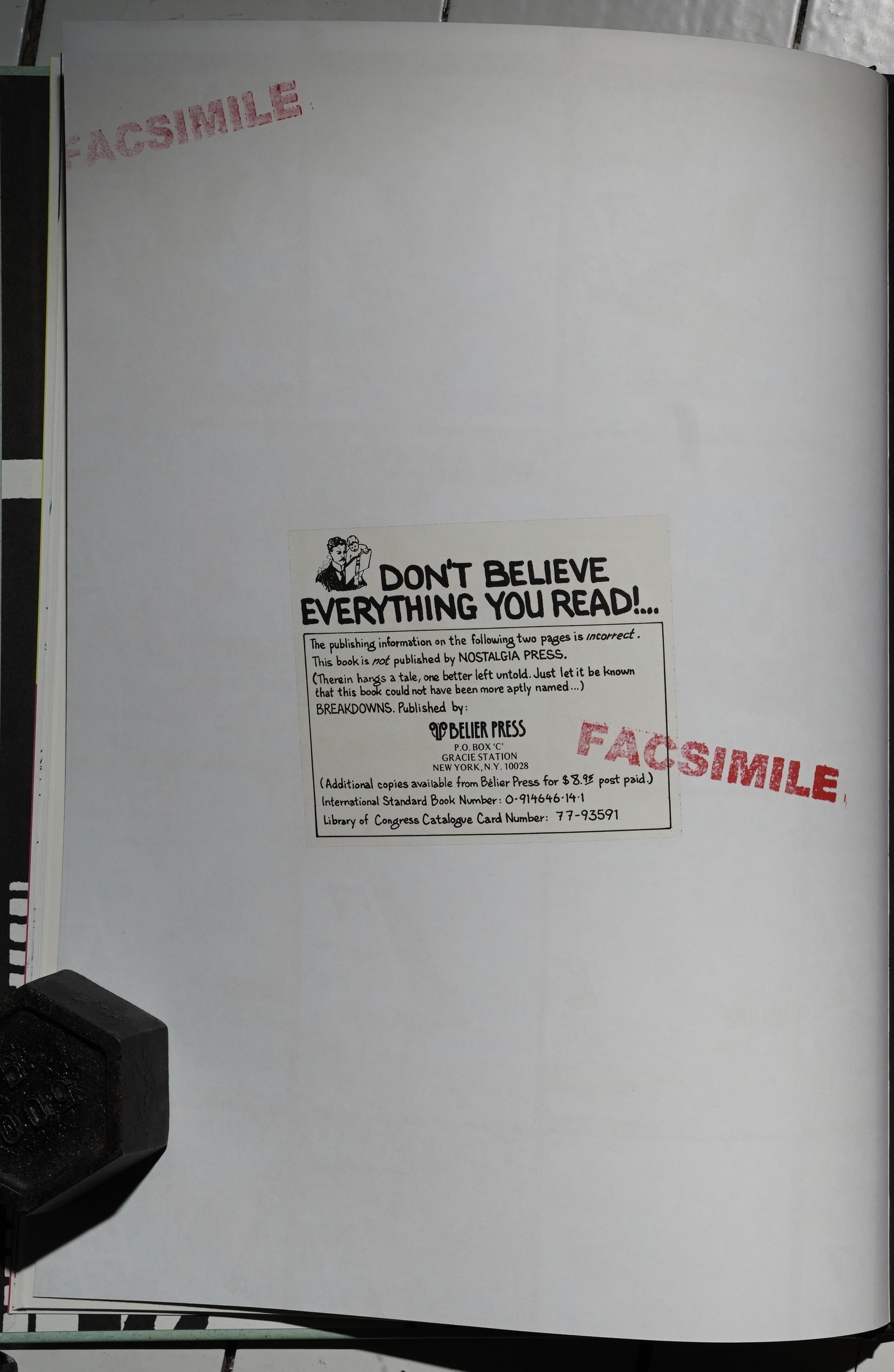 Even the page with the sticker is reproduced. (But they didn’t glue in a new sticker.) 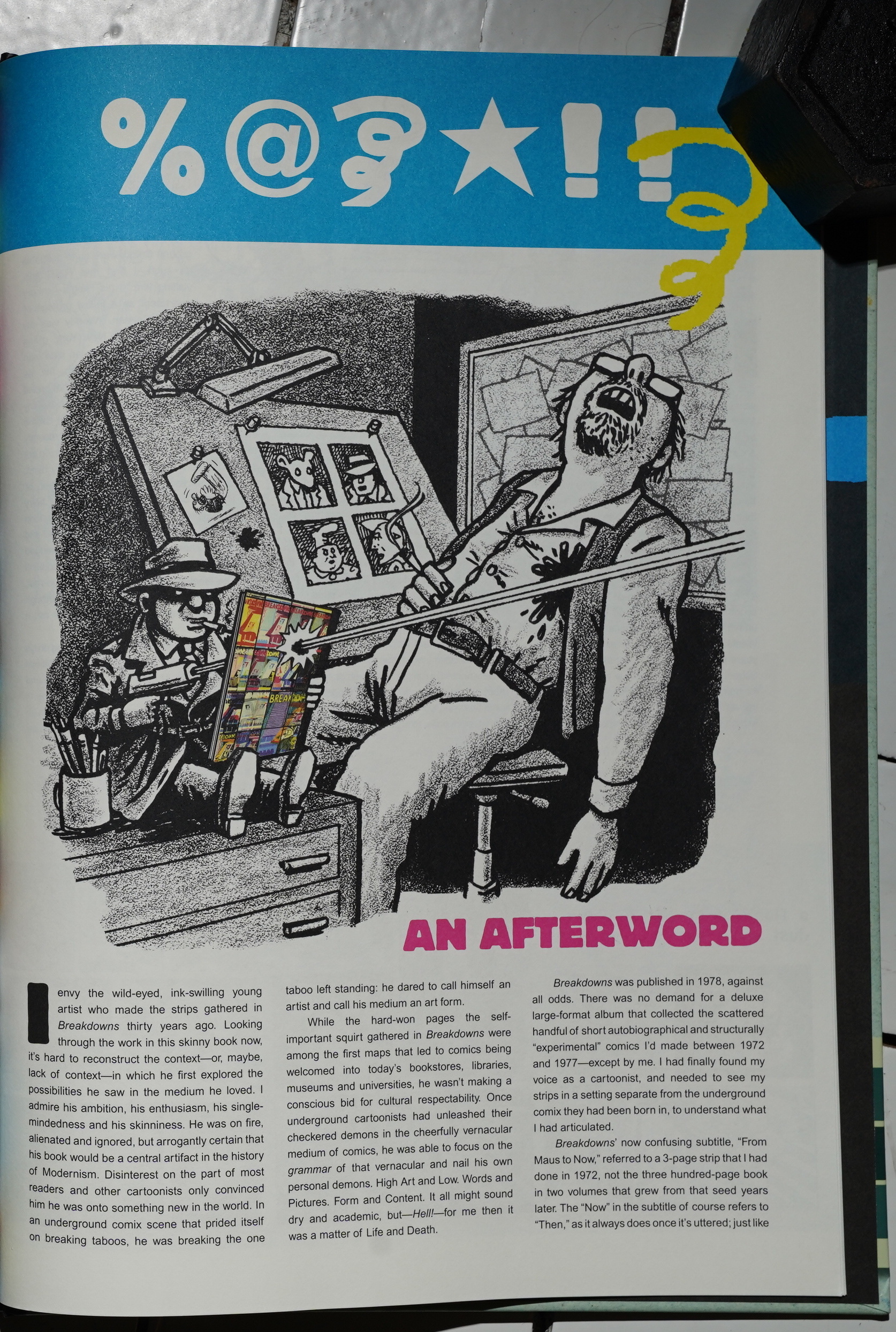 And then we get an essay where Spiegelman talks about himself in the third person a lot. 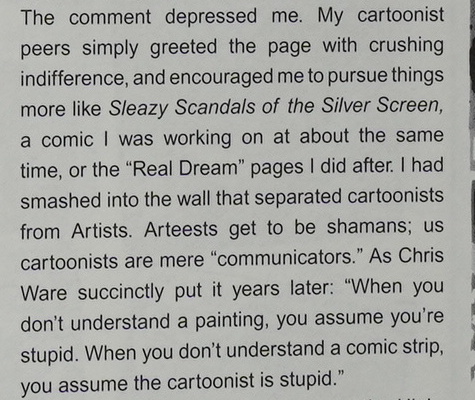 Oh, that Chris Ware is so deep. Who is that “you” that makes these assumptions about comics? And there’s oodles of people that think that arteests are morons — and many of them are cartoonists.

The self-pitying tone (mixed with Spiegelman patting himself on the back a lot for being such a genius) gets pretty grating.

Still, counting as we go, we take up
Art Spiegelman’s latest production, the
reissue last year of Breakdowns, which
Obliges us to cast a moistly rolling eye
back 30-some years in comics history
to see, by comparison, what we may
have learned in the three decades that
the Journal has rhe-
present proprietor.
Time travel is always risky. We may
discover that a foray into Breakdowns is
more excuse than measure, but it’s an
excuse worth taking.
The Irish novelist James Joyce once,
in a flight Of verbal fancy, wrote: No-
birdy avair soar anywing to eagle it.
If not high praise, at least acknowl-
edgment of extraordinary achieve-
ment. And we may say the same about
Spiegelman’s Breakdowns: Portrait ofthe
Artist as a Young (76 IOx14-
inch pages, many in color, hardcover;
Pantheon, $27.50).
My invocation of Joyce is neither fa-
cetious nor arbitrary: Joyce, the inven-
tor Of stream-of-consciousness writ-
ing, was a formalist, unabashed and
unrepentant; ditto, with a vengeance,
Spiegelman, but with pictures. And
Comicopia by R.C. Harvey
Breakdowns is the par excellence exem-
plar of his preoccupation. dubious
relationship between formalists has
scarcely evaded Spiegelman’s attention:
The subtitle of his book echoes that of
Joyce’s semi-autobiographical novel.
Spiegelman’s book gives us the per-
fect pivot upon which we can turn to
look back while standing, firmly root-
ed, in the present. With Breakdowns
as the fulcrum and the Journal as the
lever, we should be able to move the
world of comics.

Considering the content, it’s not im-
possible to imagine how this edition of
Breakdowns came into being.
Spiegelman is a notoriously slow
worker: It took him two years to Com-
plete his last book, In the Shadow ofNo
Towers, which he undertook to express
his alarm and anger in reaction to the
terrorist attack on the twin towers
of the World Trade Center in lower
Manhattan, just a few blocks from his
studio and near the school one of his
children was attending.
“Reaction” implies something nearly
immediate, but Spiegelman’s treatment
soon evolved into a pousse-café of the
agonies the cartoonist endured in the
immediate and ensuing aftermath Of
9/11, in which he layered allusion af-
ter allusion in his original comics con-
struct and then laminated the whole
rbjngæir.b.
per comic strips.

Similarly, many of the individual
undertakings in the book, for all their
pyrotechnical storytelling methods, are
often meaningless in any but a purely
formalistic sense.
‘The longest “story” — the eight-
page “Ace Hole, Midget Detective”
— is a witty visual-verbal spoof Of the
hardboiled-detective genre, deploying
visual allusions to Picasso as well as to
classic comic strips (with a telling dig at
the Comics Code), but it doesn’t con-
dude so much as it simply stops, as if
Spiegelman had run out of allusions to
make. All form but no content.
I don’t mean to imply that Break-
downs is somehow inferior. It decid-
edly isn’t. As a demonstration of the
capabilities of the comics art form,
the book is usually superior. And the
demonstrations are not the stuff of dry
classroom lectures: They are entertain-
ing. One-to-three pages long, they’re
short and quippy, a little like blackout
playlets but often without punch lines.

One thought on “PX08: Breakdowns: Portrait of the Artist as a Young %@꩜🟊!”