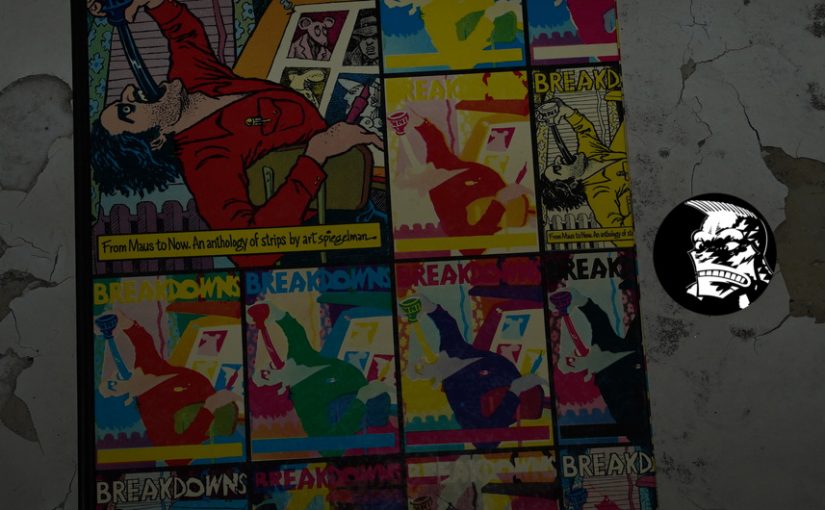 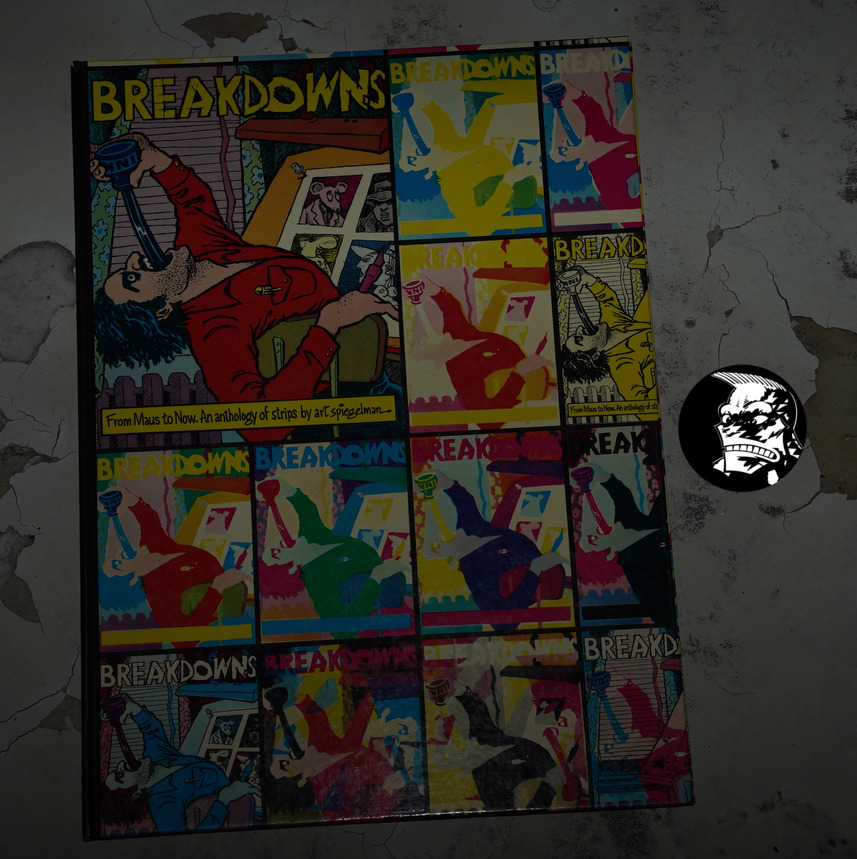 Breakdowns: From Maus to Now by Art Spiegelman (260x360mm)

I got this just a week ago, and I’m really excited to be fondling it now. I mean reading it! Reading it! 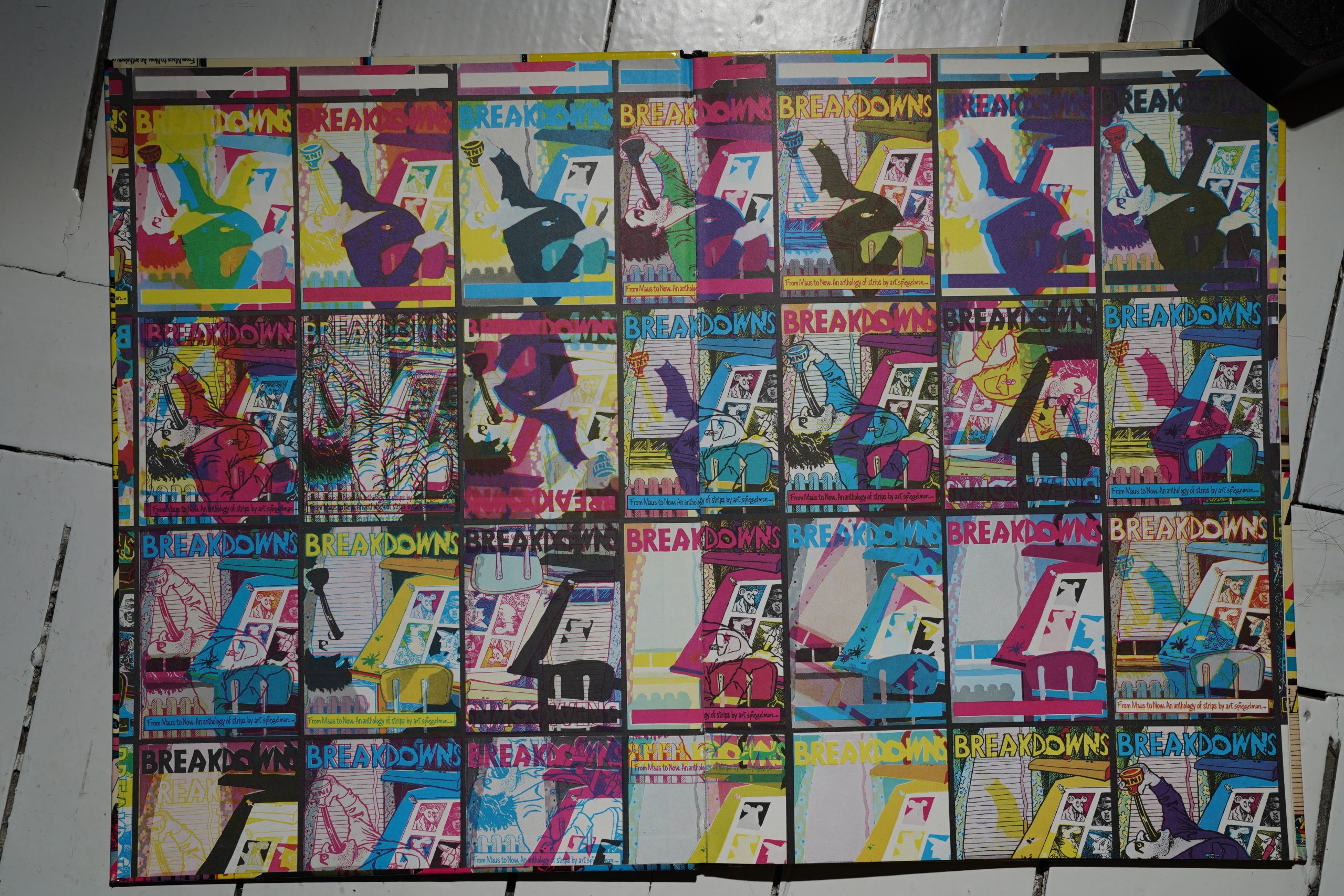 Wow, the colour separation thing continues over the front endpapers, too… must have been so much work to do.

Anyway, this is a collection of Spiegelman work from the early to mid 70s… most originally appeared in Arcade, I guess? But in a smaller format — this is basically in the Raw format, but with hardback covers and a spine. Must have been very expensive to do, and I wonder how Spiegelman convinced a publisher to do it. 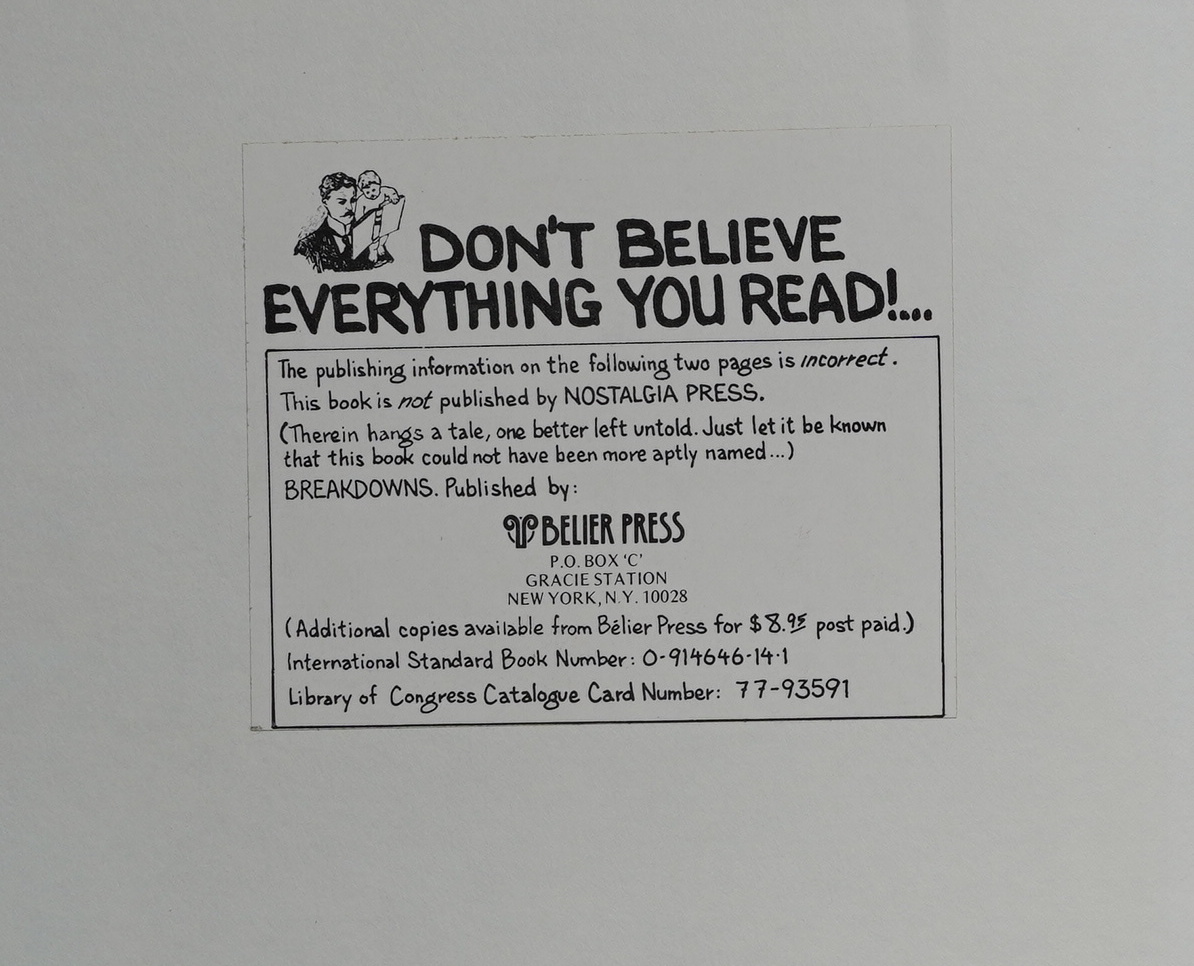 Or… two publishers? There’s a sticker on the pre-colophon page saying that this was supposed to be published by Nostalgia Press, but that they… er… flaked? So it’s published by Belier Press instead. 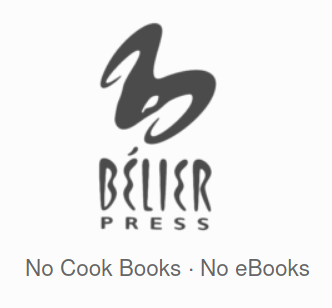 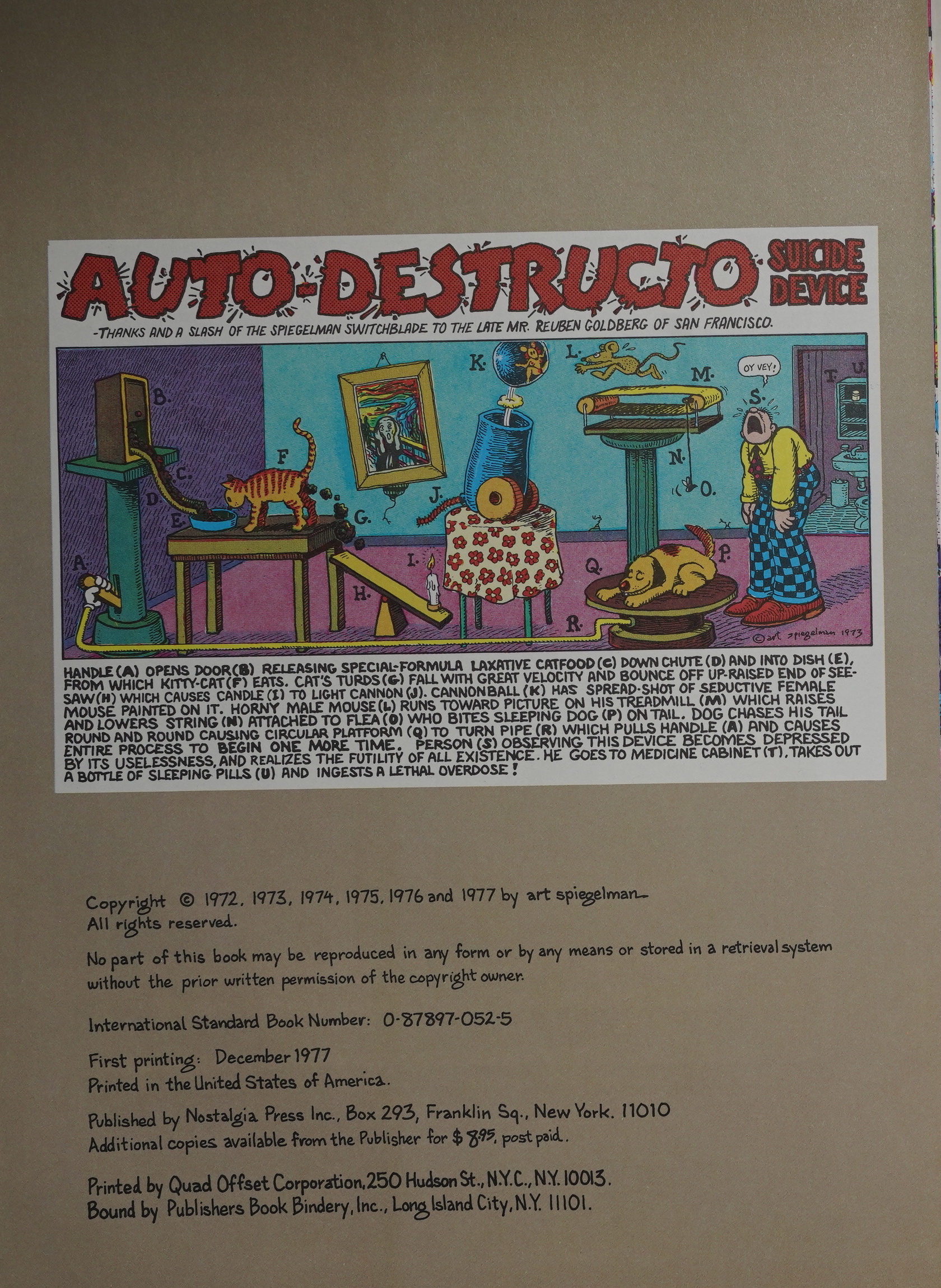 Nostalgia Press is mostly known for publishing comic strip reprints in the 70s (Prince Valiant, etc). I haven’t seen those books myself, but I think they were also pretty big? Perhaps the same format as this book?

Perhaps this explains why Nostalgia dumped it?

Nostalgia Press continued publishing throughout the 1970s. Their last book came out in 1979, following the death of Gelman the preceding year.

It’s way off that publisher’s remit to publish something as arty as this (and there’s sex in it, too)…

(This mysterious mystery is cleared up in tomorrow’s post.) 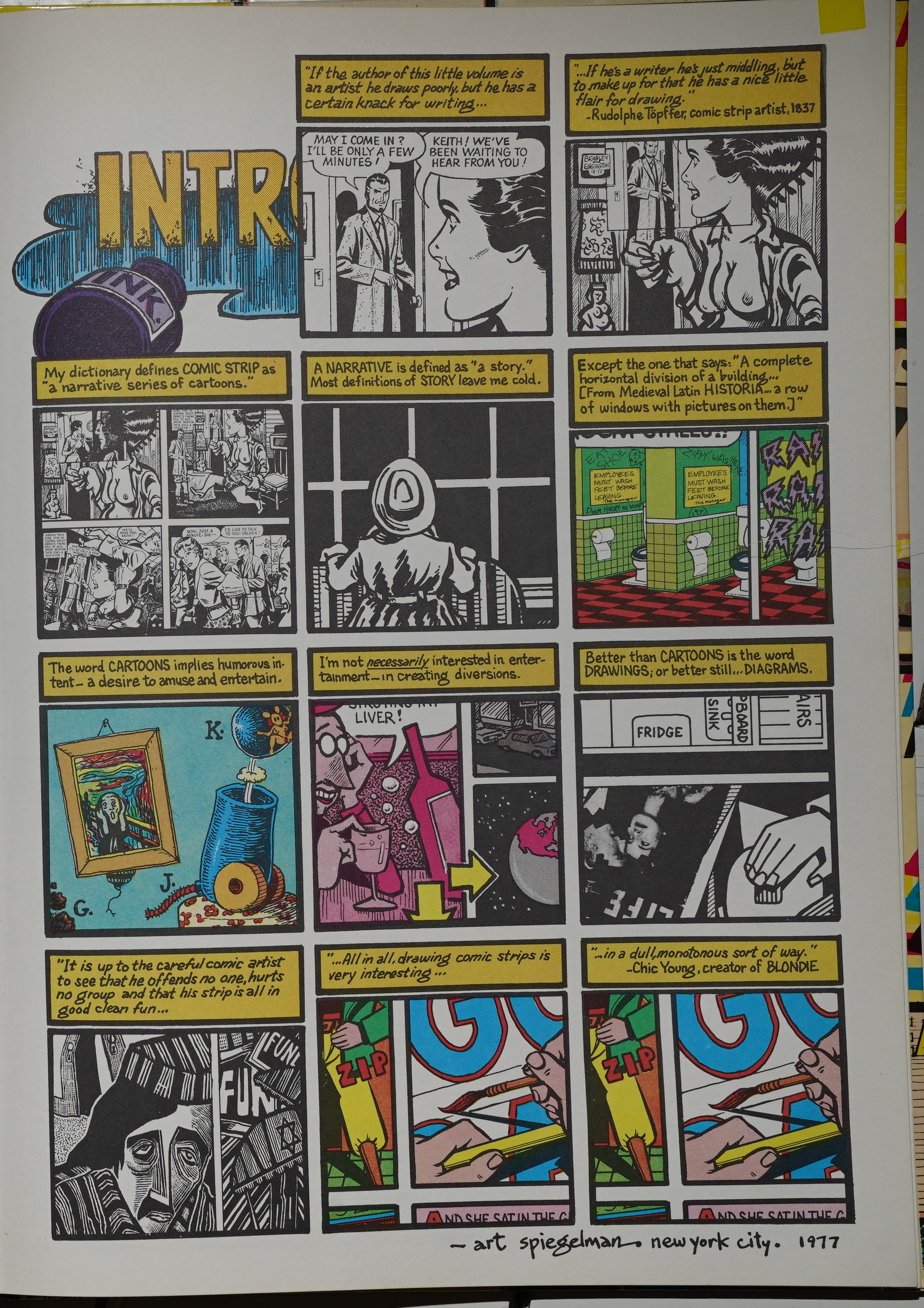 We get an introduction that’s composed of excerpts from the strips… and some wise words from the creator of Blondie. 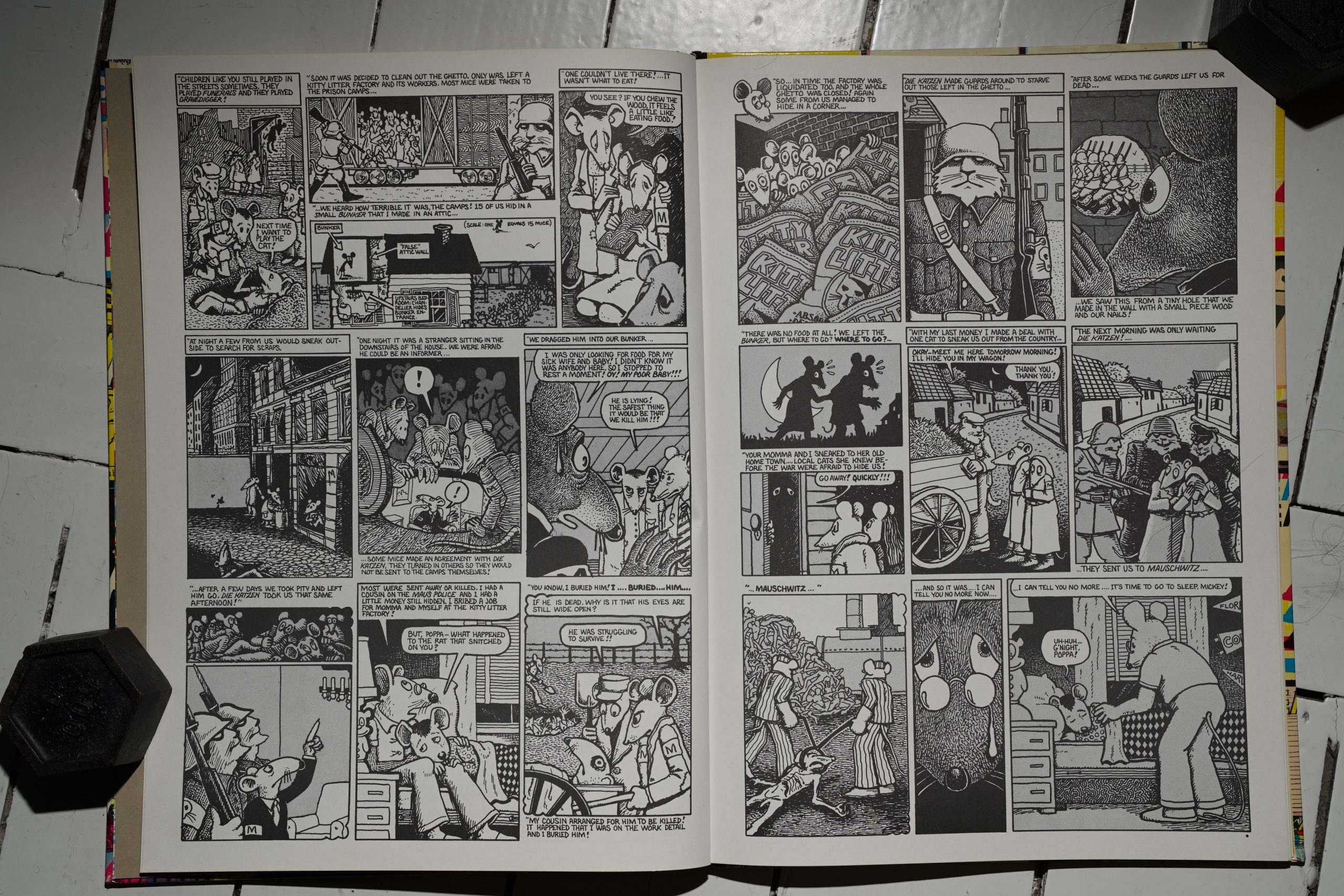 And then we’re straight off into two pretty heavy pieces: Spiegelman’s first attempt at doing Maus, and fortunately he didn’t continue doing it this way — with the mice working in kitty litter factories and… this level of cutesy is pretty hard to take. But perhaps Spiegelman still hadn’t decided to redo the strip at this point? The subtitle is “From Maus to Now”… 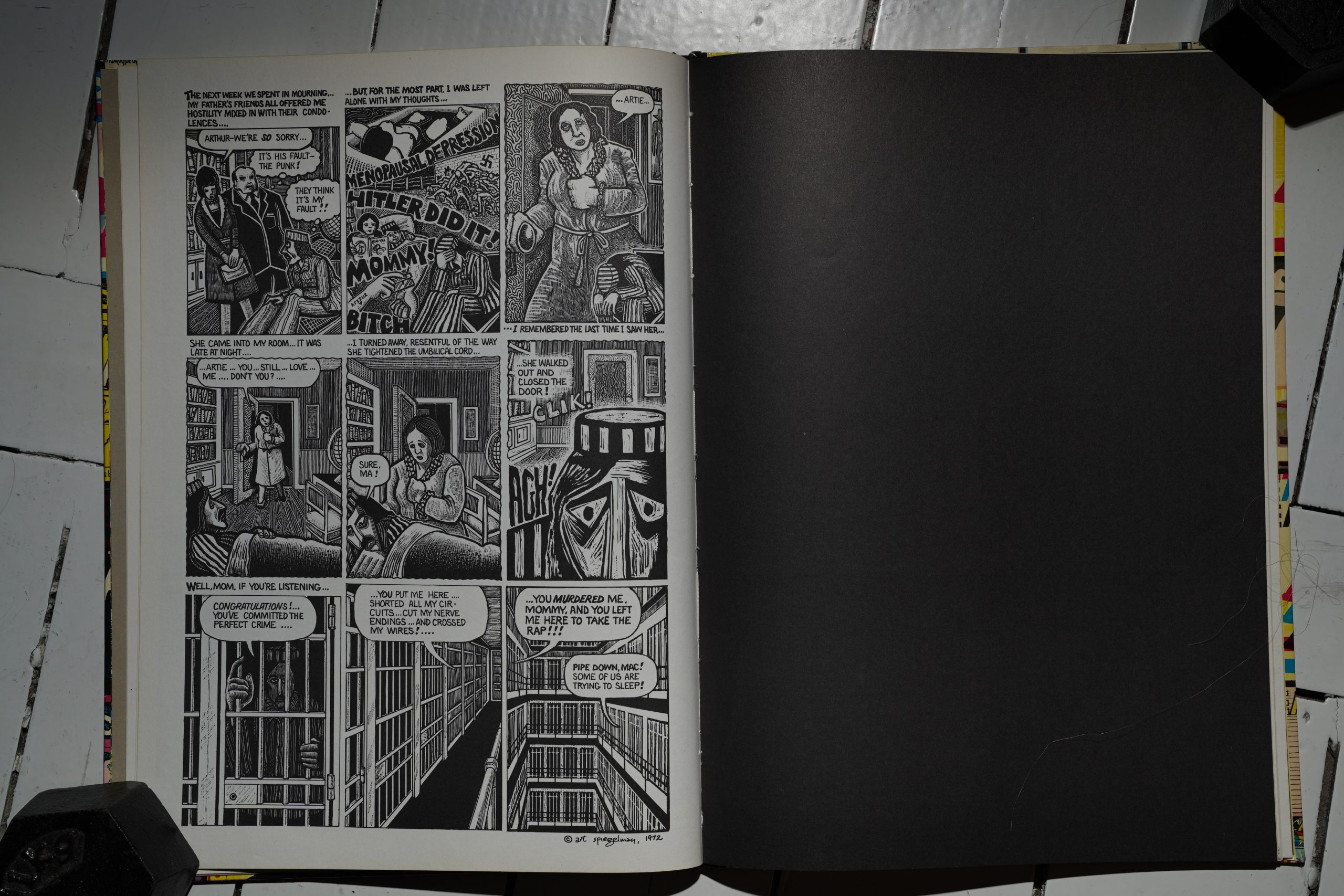 Then Prisoner on the Hell Planet, which I remember reading as a teenager and being utterly gripped by. I’m… a bit more critical now? It’s a howl that hasn’t quite been digested yet, and comes off pretty callous. 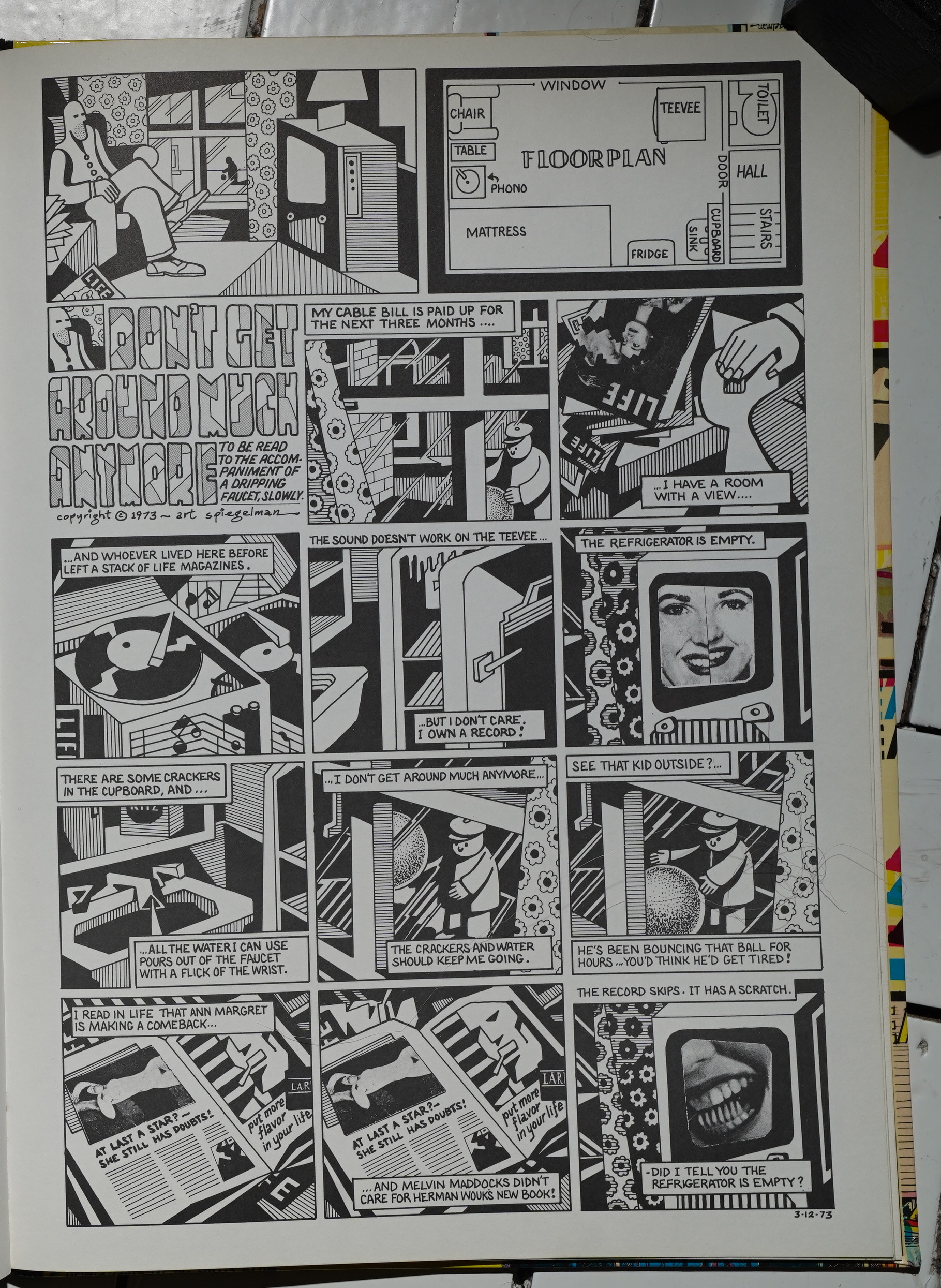 Most of the rest of the book is taken up by these formal exercises… that are just amazeballs. I guess they could come off as cold, but to me they’re just bristling with emotion. 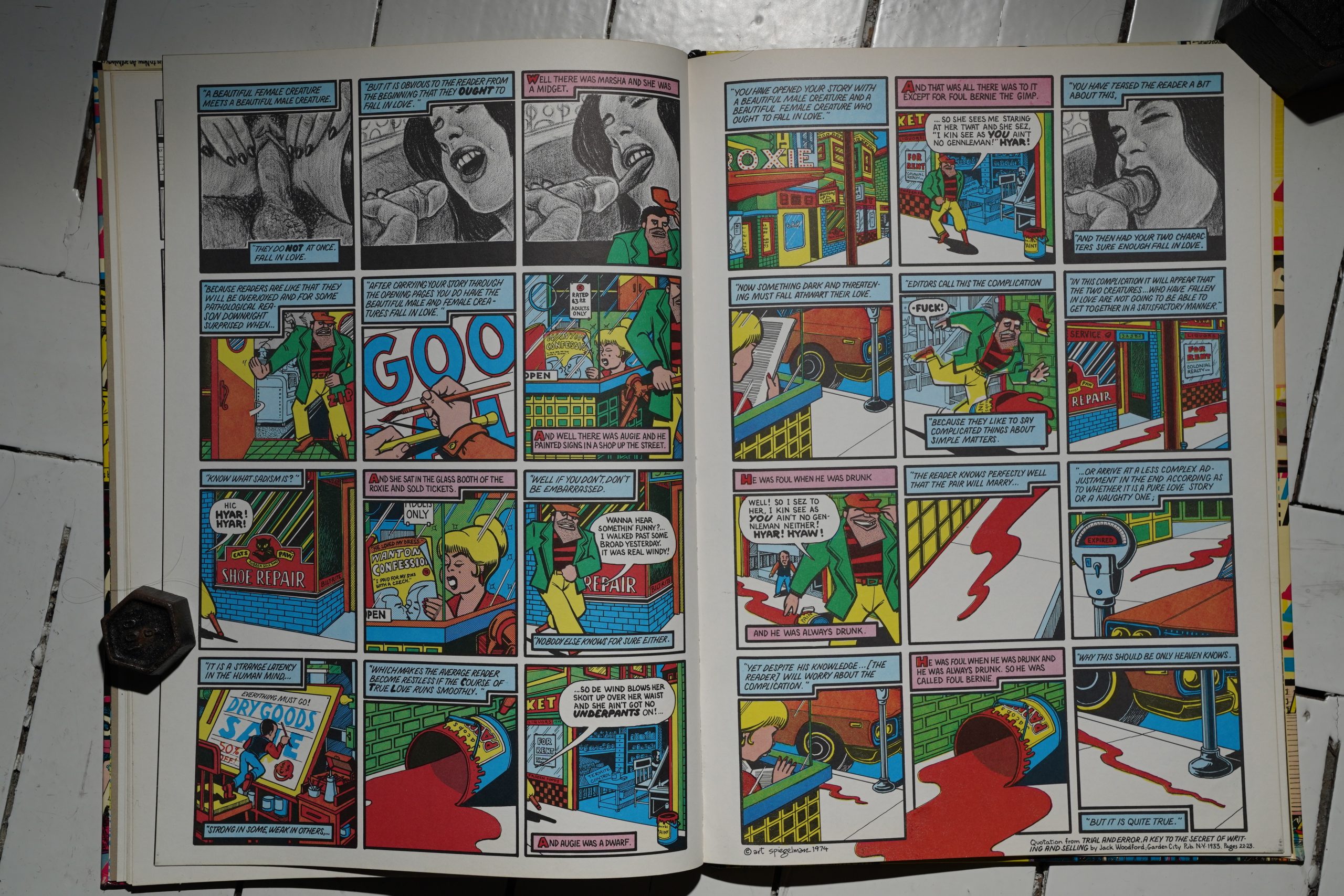 And pretty funny, too. 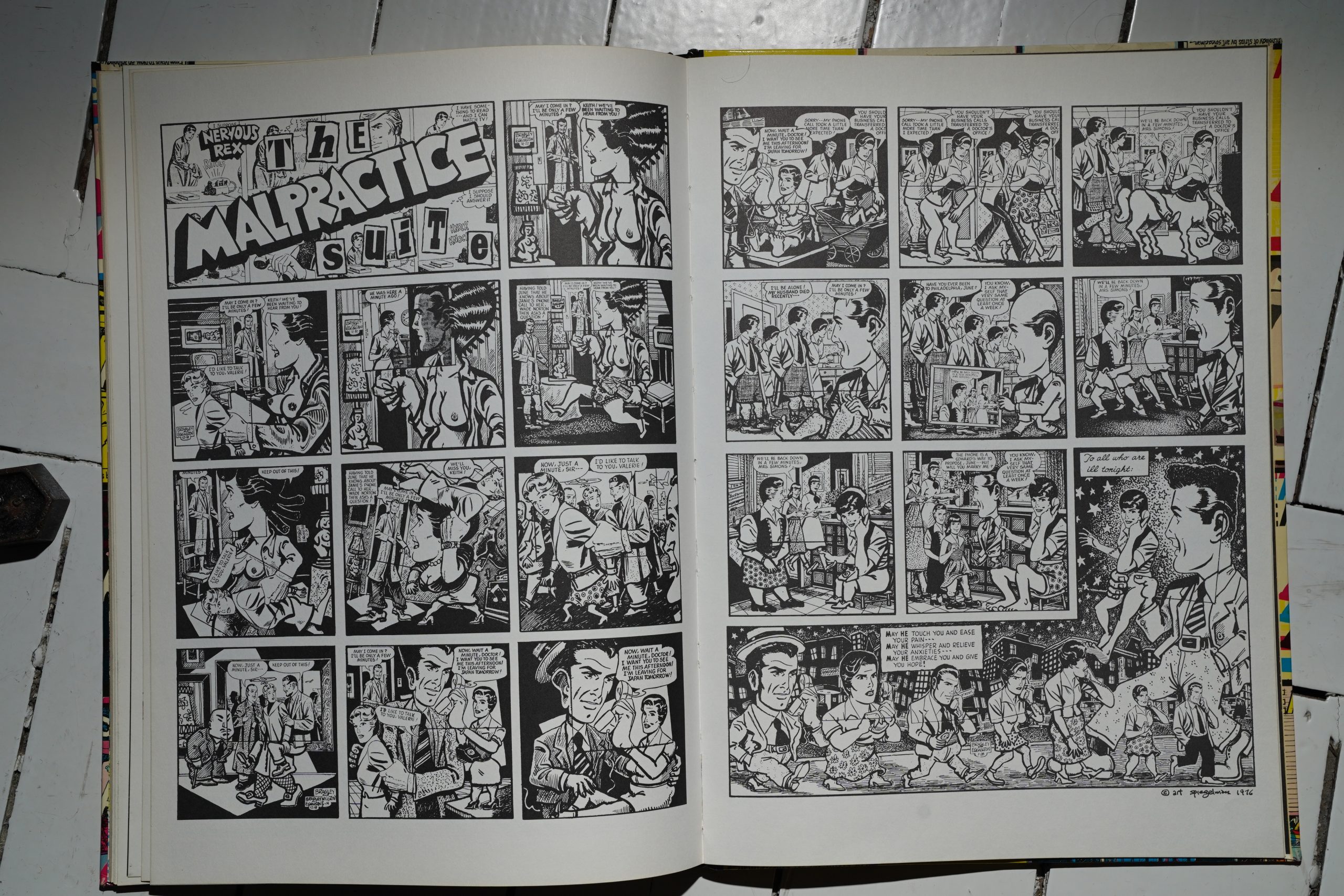 Oh! The Malpractice Suite! I think this was the one that blew everybody’s minds, and you can totally keep looking at this for… well, OK, not hours, but for a long time, finding new, funny bits in here. The expansion of a Rex Morgan, MD strip into… all this… It’s fantastic.

I can’t imagine what it must have felt like to stumble across this book in 1977, but reading it now, it’s absolutely thrilling. It’s not just the contents — but somehow the format just feels so right… as if they’re getting away with something somehow. I can’t really explain it: It’s a slim, large hardcover book… it feels like an object out of time.

I really shouldn’t be quoting at this length, but this is a really insightful review. And… I can’t help finding it pretty amusing the way Benson says “he hasn’t particularly sought fame or advertised himself” — which is what Spiegelman would be viciously criticised for after Raw got going.

Maybe I’ve given the impression that
Breakdowns is coldly abstract or analytical. This
is certainly not the case atall. “Hell Planet,” a
story which more nearly achieves the potential of
the comics medium than any Other I can think of,
is a searing account of an autobiographical
experience with an almost shockin? emotional
intensity that recaps Allen Ginsberg s great play
Radish,
also about an emotional
autobiographical family experience. Like
Kadish, its revelation is unrelenting, and part Of
its power comes from one’s absolute conviction
that it is truthful in every detail.
The same conviction rings with Spiegelman’s
famous story “Maus,” which has often been
described as Jews and Nazis portrayed in funny-
animal terms. Actually, the Story is an
autobiographical recollection; “when I was .a
young mouse in Rego Park, New York, my
poppa used to tell me bedtime stories about life
in the old country during the war…”
• •Maus” originally appeared in a comic titled
Funny Aminals. so perhaps nobody thought
much about the story’s anthropomorphism. But
it’s important to the story, and it’s simple. Most
children hear Winnie the Pooh and such animal
stories at bedtime; Spiegelman heard another
type of tale, and he’s visualized it here in bedtime
story terms.

Despite Kurtzman’s constant use of new
subject matter and forms each issue was in-
stantly recognizable as his work. His very per-
sonal vision and writing style was like a skin that
could be stretched around any different shape of
subject.
In the same way, Spiegelman constantly
changes his approach, his subject matter, even
his concept of what a narrative is. Each job is a
tackling of something new, some kind of ex-
periment. Yet there is a unique overall style that
makes each story distinctly Spiegelman ‘s.
His range becomes that much more evident
when the stories are collected together in one
volume. Breakdowns really reveals a dimension
to Spiegelman’s Work that was perhaps not
obvious when the stories were published months
apart in different publications.
Perhaps the most important similarity between
Kurtzman and Spiegelman is that in their quite
different ways they constantly explore and
examine whatever subject they are writing about,
and attempt to communicate to their readers
their discoveries.
Spiegelman didn’t spell out his intent as an
artist in the introduction to Breakdowns, but
perhaps he was summing it up when he
responded to someone’s definition Of un-
derground comics on a panel at the 1975 New
York convention.
He said, “One thing that disturbs me about
the term underground comics is that I get lumped
together with artists who I have little in common
with, specifically the fantasy escape kind Of thing
that allows people to dream and fall asleep some
more. For me, when I use the word underground
comics mean work that will wake you up, work
that allows you to be able to see more, to become
more receptive, more alive.

2 thoughts on “PX77: Breakdowns: From Maus to Now”