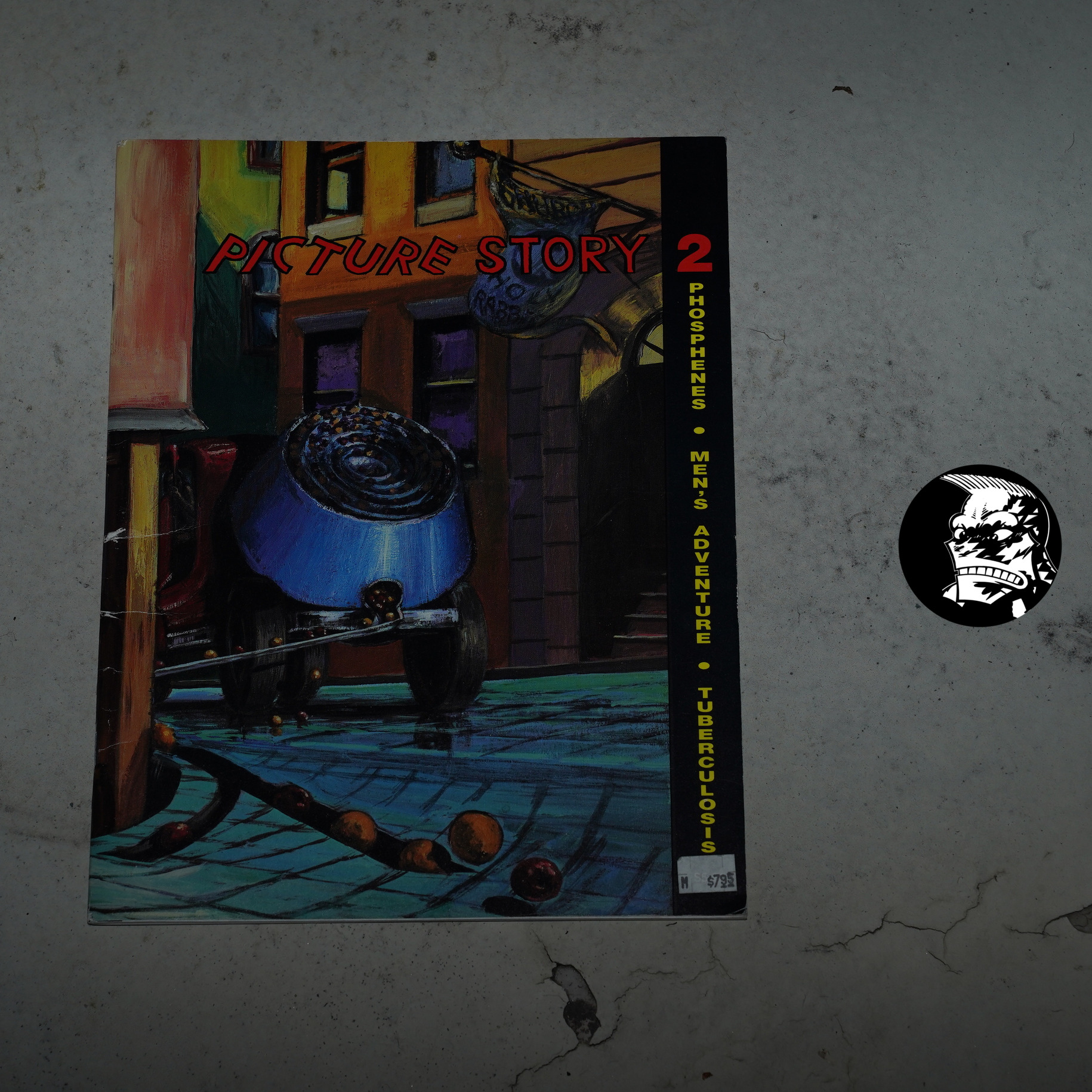 Picture Story Magazine #1 was published by Katchor in 1978… and just eight years later, we have the second issue. 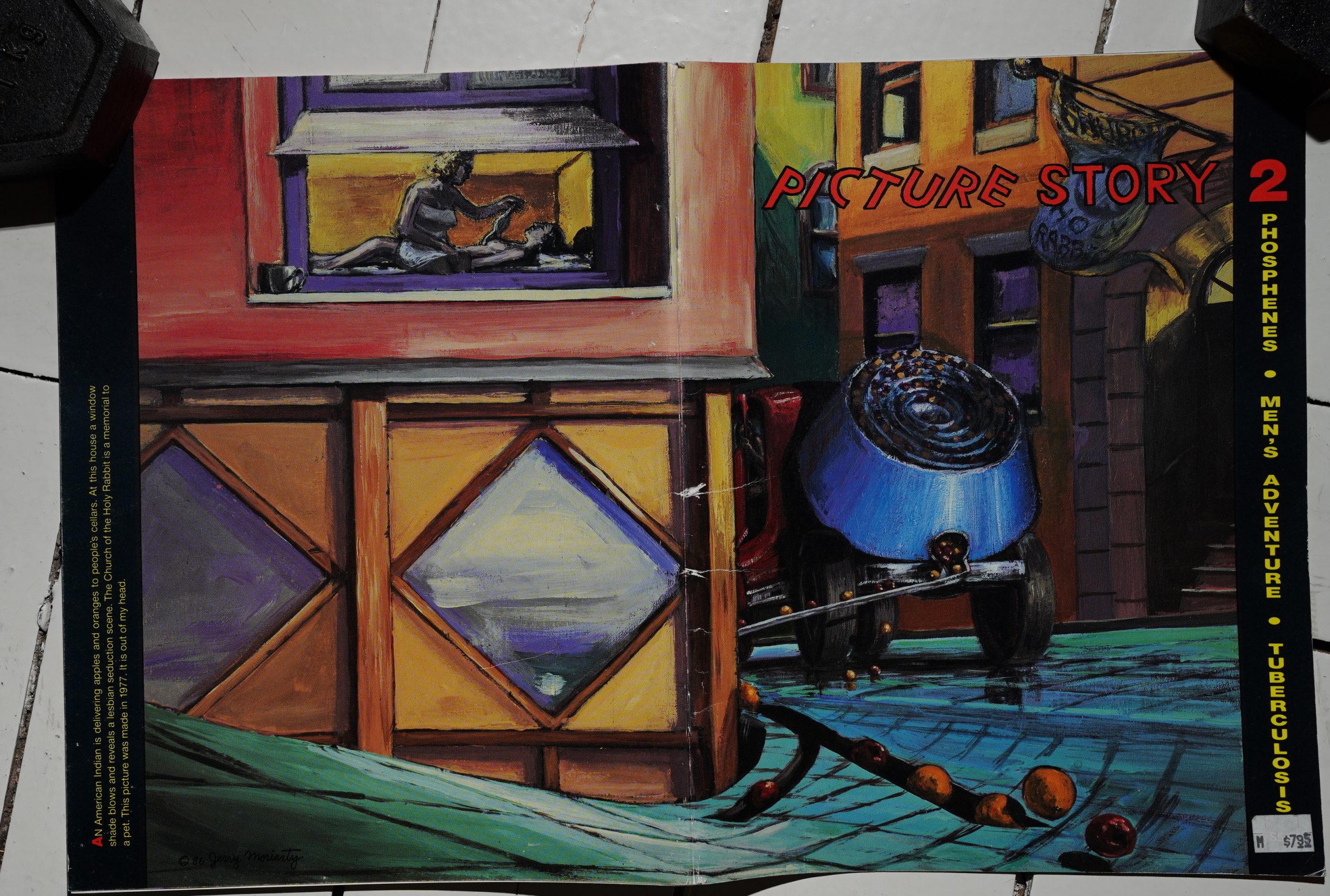 This is a 64 page magazine sized book with cardboard covers and thick interior pages. Jerry Moriarty does the mysterious wrap-around cover. 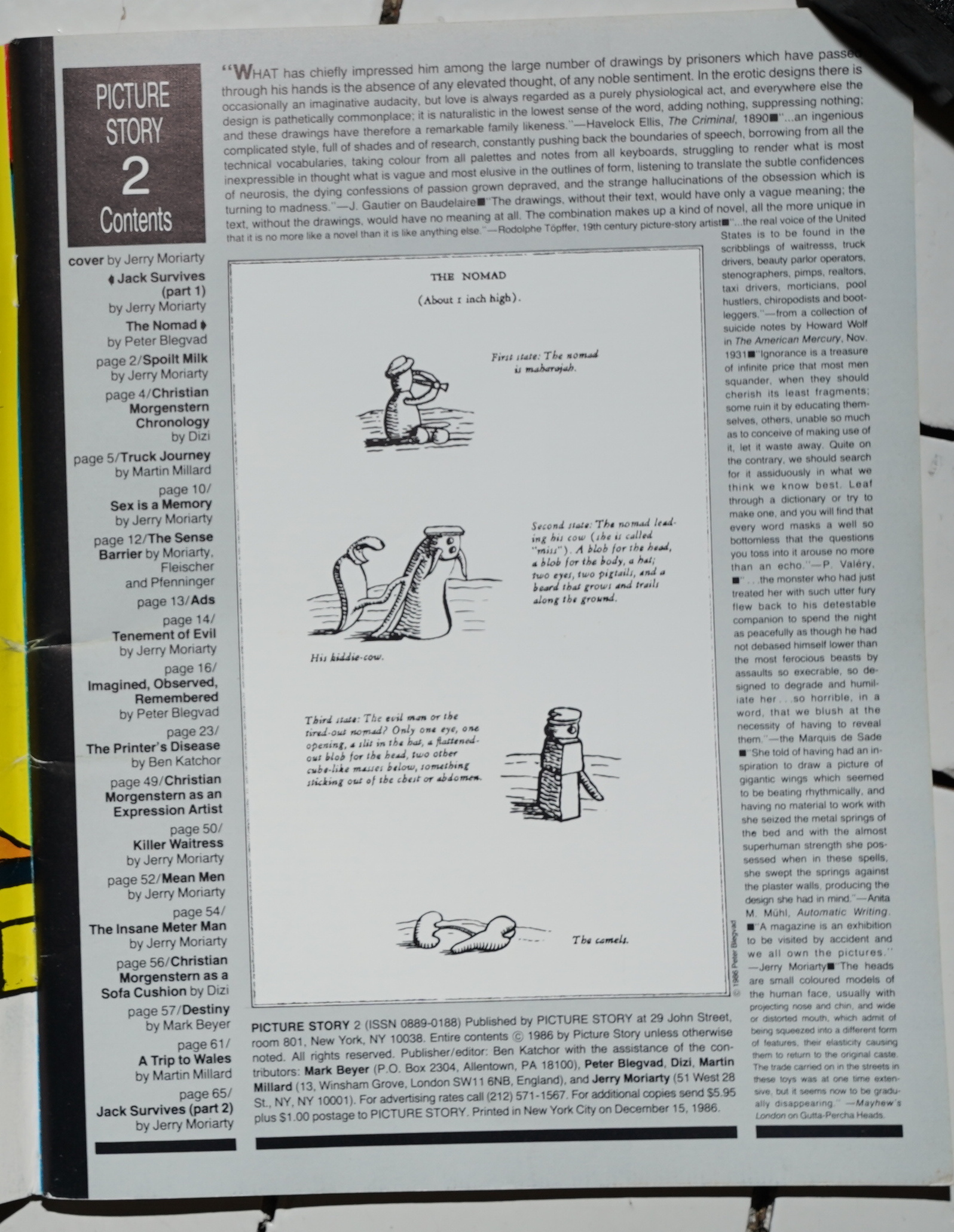 We start off with some pretty gnomic excerpts… 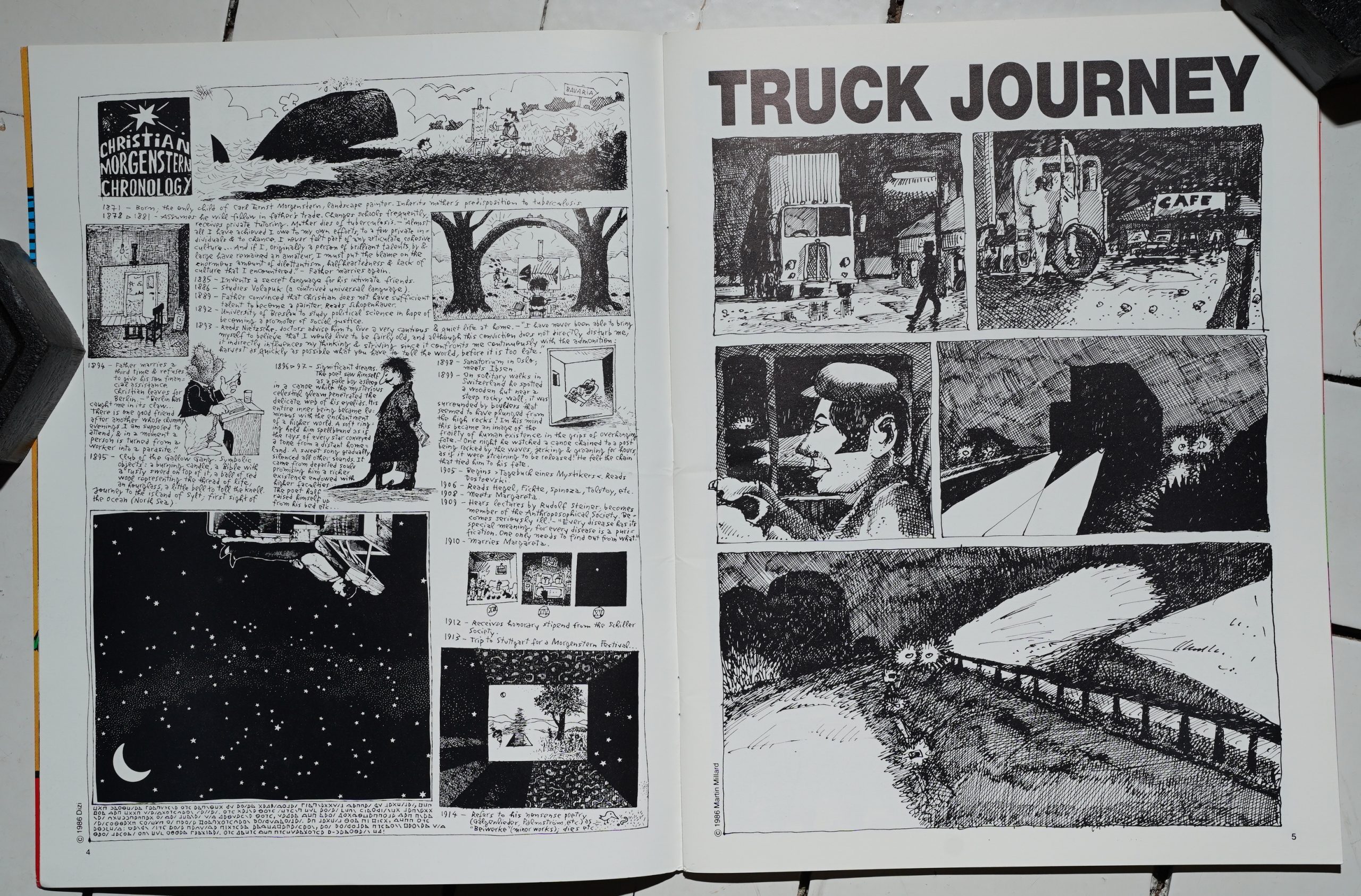 … and then shorter and longer pieces by a variety of people — here’s Dizi and Martin Millard. Many of these pieces mention somebody named Christian Morgenstern, who turns out to exist. 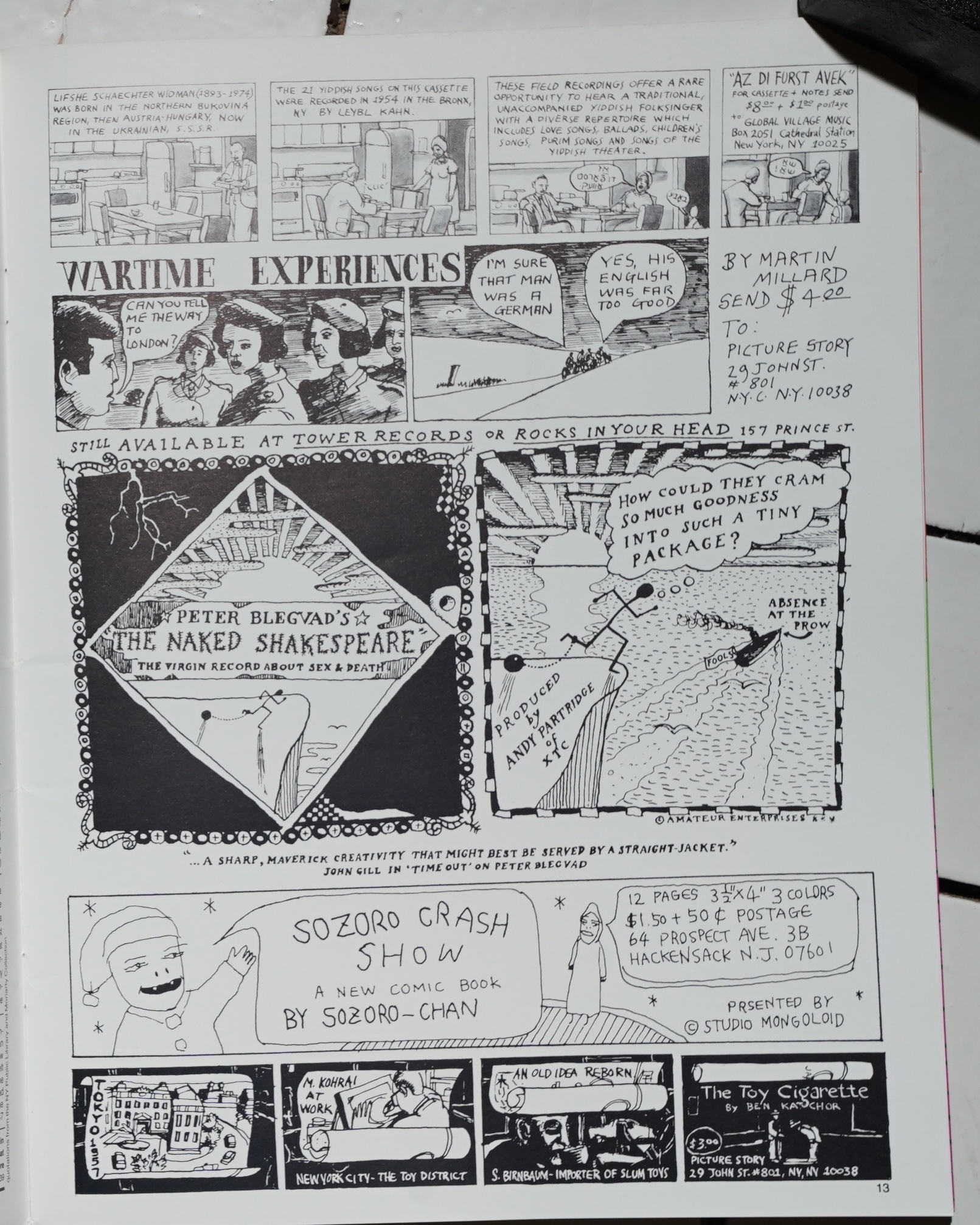 There’s a page of er ads, like The Toy Cigarette by Katchor, and Wartime Experiences by Martin Millard. Which also seems to exist. It’s difficult to tell sometimes with arteests… 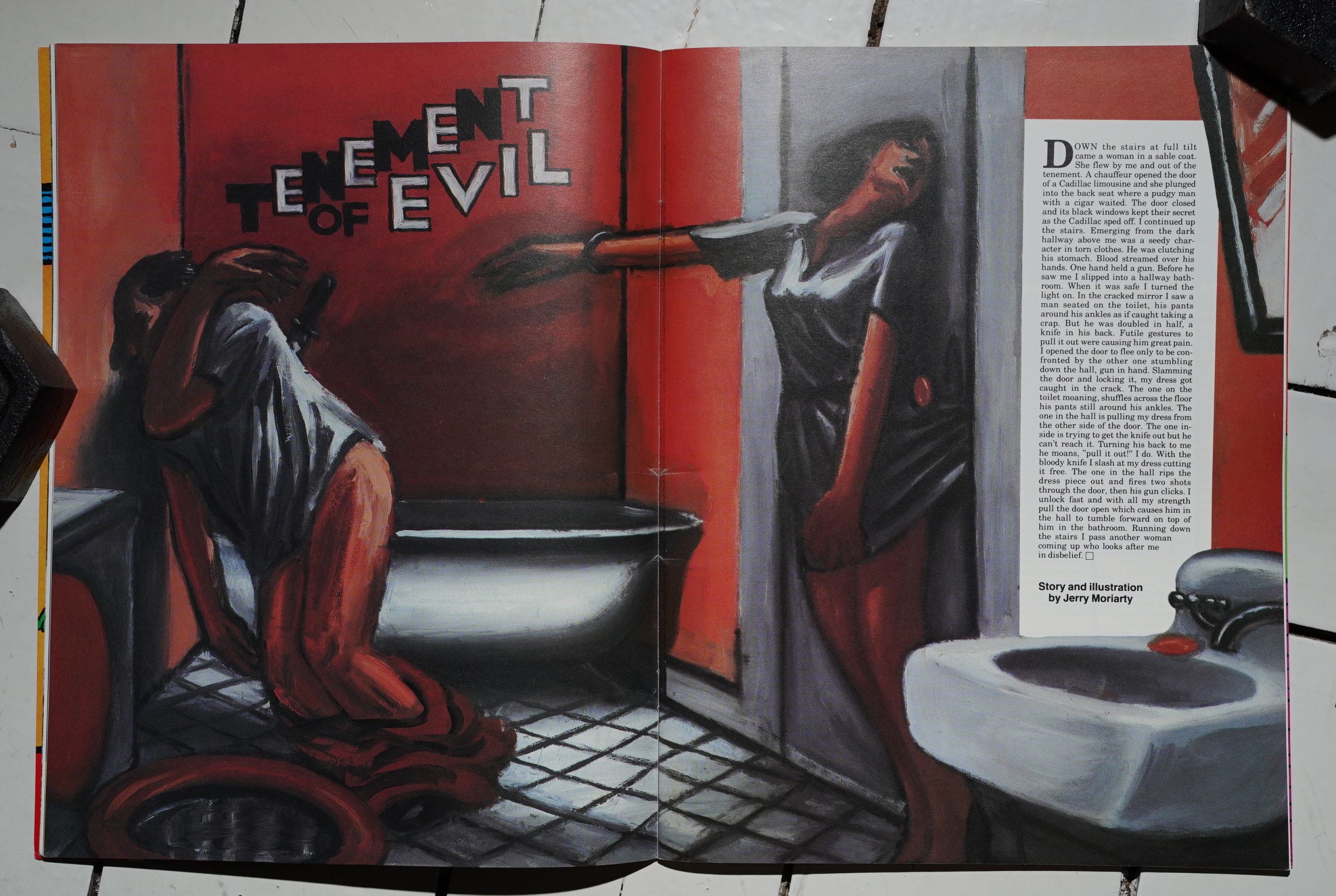 There’s about a half dozen of these gorgeously reproduced spreads by Jerry Moriarty. My guess is that the stories came after the paintings? 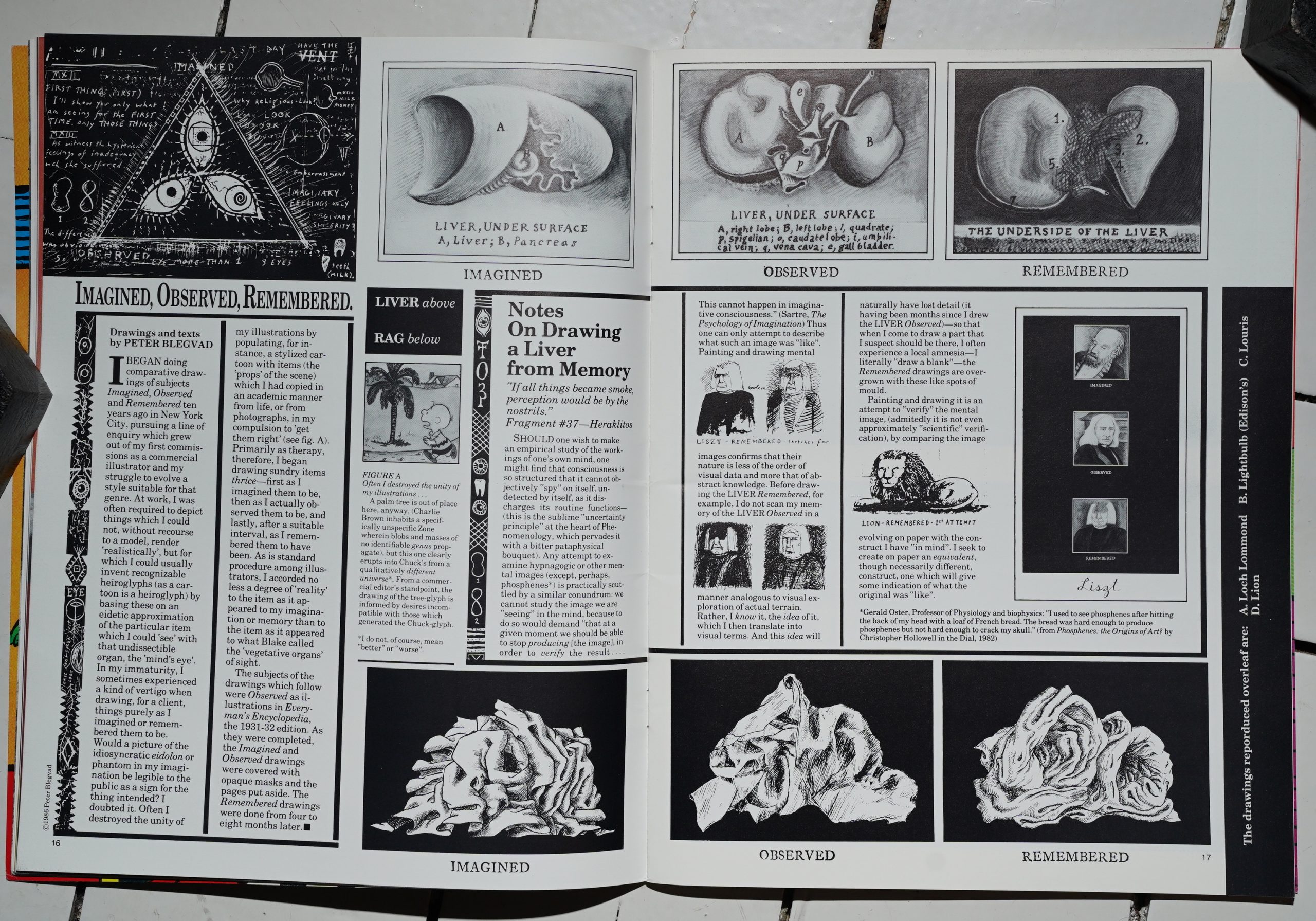 Peter Blegvad does a thing on imagined/observed/remembered…

What is it this book reminds me of… Oh! It reminds me of Ben Katchor! It’s got this vague, strange logic flowing: It’s hard to pin down just exactly is going on, but it makes sense anyway.

I’ve seldom seen an anthology reflect the editor to this degree. It’s delightful to sit here reading this thing. 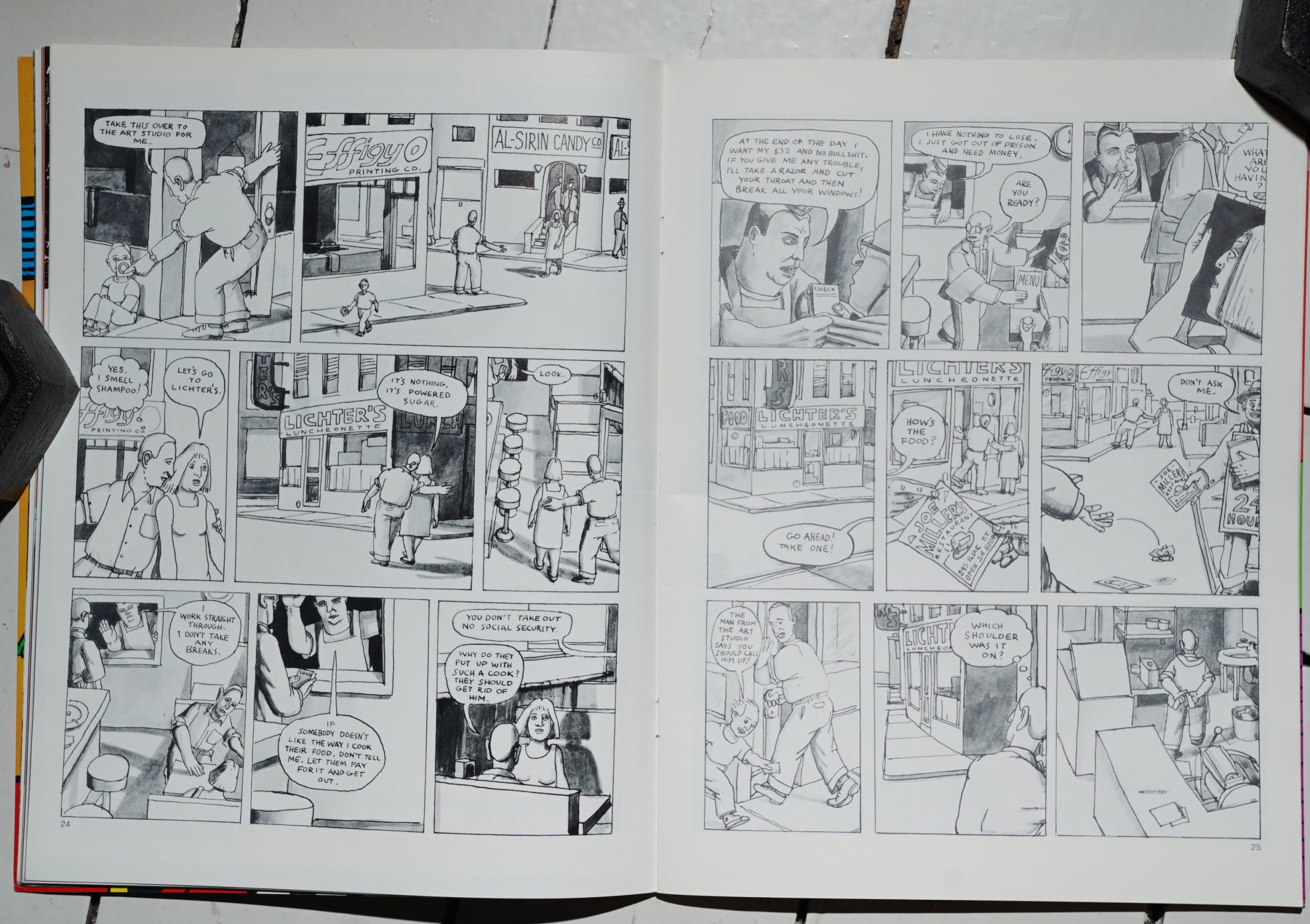 And then Katchor shows up himself, with the decidedly longest piece in the book. It’s 26 pages long, and it’s absolutely prime Katchor. It’s got all these characters and plots that intersect, but it’s never entirely clear just what it’s all about. I read it twice this time over, and I’m still not sure just what the repercussions were for Mr. Laszlo… the printer was going to print something for him, but… what…

Anyway, it’s called The Printer’s Disease, and I don’t think it’s never been reprinted? It’s insane! This thing is amazing!

Santoro: When I read one of your stories that’s six to ten pages in length … I feel you have a little more room to create that believable setting you were talking about. I get the same feeling with the strips, but … the sense of place, the believable setting that comes across in the longer stories…

Katchor: Well, hopefully with all the weekly strips it does that by accumulation. I think if you show someone one strip, they might not get it. And some people only understand it when they see it in book form. They read eighty of them in one sitting.

Katchor: And some people never get it.

Santoro: Y’know, that story The Printer’s Disease, for me, it was the first story of yours that I had ever read. I had seen your strips here and there, but that story really knocked me on my ass. I felt as if I was given a key of some sort to look at your work in a different way. Then I approached the strips and they really began to sing. 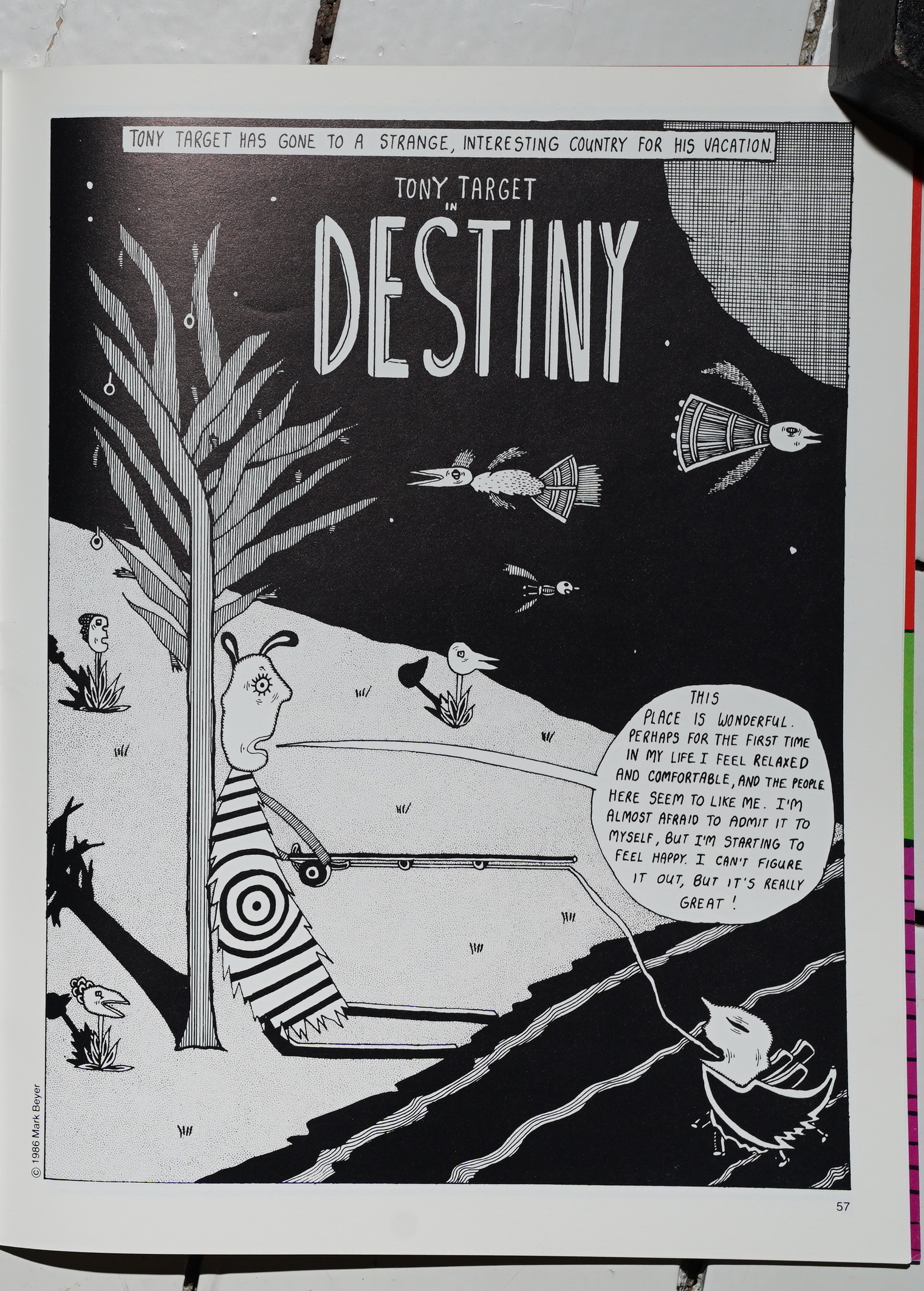 There’s even an uplifting Mark Beyer story in here. (Yeah, yeah, you can guess how it goes.)

The first Picture Story magazine had its charms, but this one is amazing.

I missed the first issue of Picture
Story, but the second issue—edited
and published by Ben Katchor—fea-
tures an array of unusual graphic
material by such New York graphic
talents as Katchor. Mark Beyer, and
Jerry Moriarty. I mention this trio in
particular among the contributors only
to solicit name recognition. (Each has
had work impressively showcased in
RAW over the past years.) In addition,
Beyer has published his own work in
various underground comics (Dead
Stories), and Moriarty has had a col-
lection of his painterly. evocative Jack
Survives strips published by’ RAW
Books.
I was most impressed by the
residual power of the longest piece,
Ben Katchor•s 26-page story, “The
Printer’s Disease.” The story—about
a printer whose life disintegrates when
his health fails and his wife runs off
with another man—is almost painfully
banal in outline, but Katchor unfolds
the tale with unexpected and subtle
narrative twists. (The story alprs to
trail off in a number of meandering
visual and aural asides, though all the
elements cohere by the story’s close.)
It’s an affecting. moody piece of
naturalism, executed in a style of
visual storytelling that is distinctive-
ly Katchor’s. It’s all of a piece.
Moriarty contributes a number of
short pieces—more like highly con-
densed image poems. actually—that
describe violent. sometimes surreal
incidents and events. In one, “Spoilt
Milk.” a farmer climbs aboard a
World War II-vintage Spitfire that has
landed in his yard and machine guns
a barnful of cows. (That one was my
favorite.) In another. “Sex is A
Memory.” a man climbs a tree, sees
his wife making love to a neighbor-
hood girl and falls from the tree. thus
crippling himself sexually and other-
wise forever. The unrelievedly glum
disillusioned tone of these pieces pulls
Moriarty into the domain of self-
parody. (It crossed my mind that the
self-parody might be intentional.)
Moriarty does create a number of
eeries. unsettling images, and you
discover a different perspective on the
satirical sensibility of the Jack Sur-
vives strips in these stories.
Mark Beyer’s four page Tony Target
strip, “Destiny,” the title character
run the gamut of panic. nausea, and
paranoia within the context of a frac-
tured narrative. The images are
rendered in the startling outlines of
Beyer’s expressionist mode of
representing an intimidating reality.
Other features include two wordless
graphic tales, “Truck Jouney” and “A
Trip To Wales” by Martin Millard; a
series of meditations (edited by
Moriarty) on the aesthetic contours Of
sound, and a series of intriguing,
skillfully drawn images that are “im-
agined, observed, remembered” by
Peter Blegvad.
Picture Story has been impressive-
ly printed on high-quality stock. The
color values of Moriarty’s cover
image—which is impossible to
describe but somehow features an
American Indian. a lesbian seduction
scene, and the Church of the Holy
Rabbit—are wonderful. as are the
muted tones of interior color in the il-
lustrations that accompany his short,
short stories.