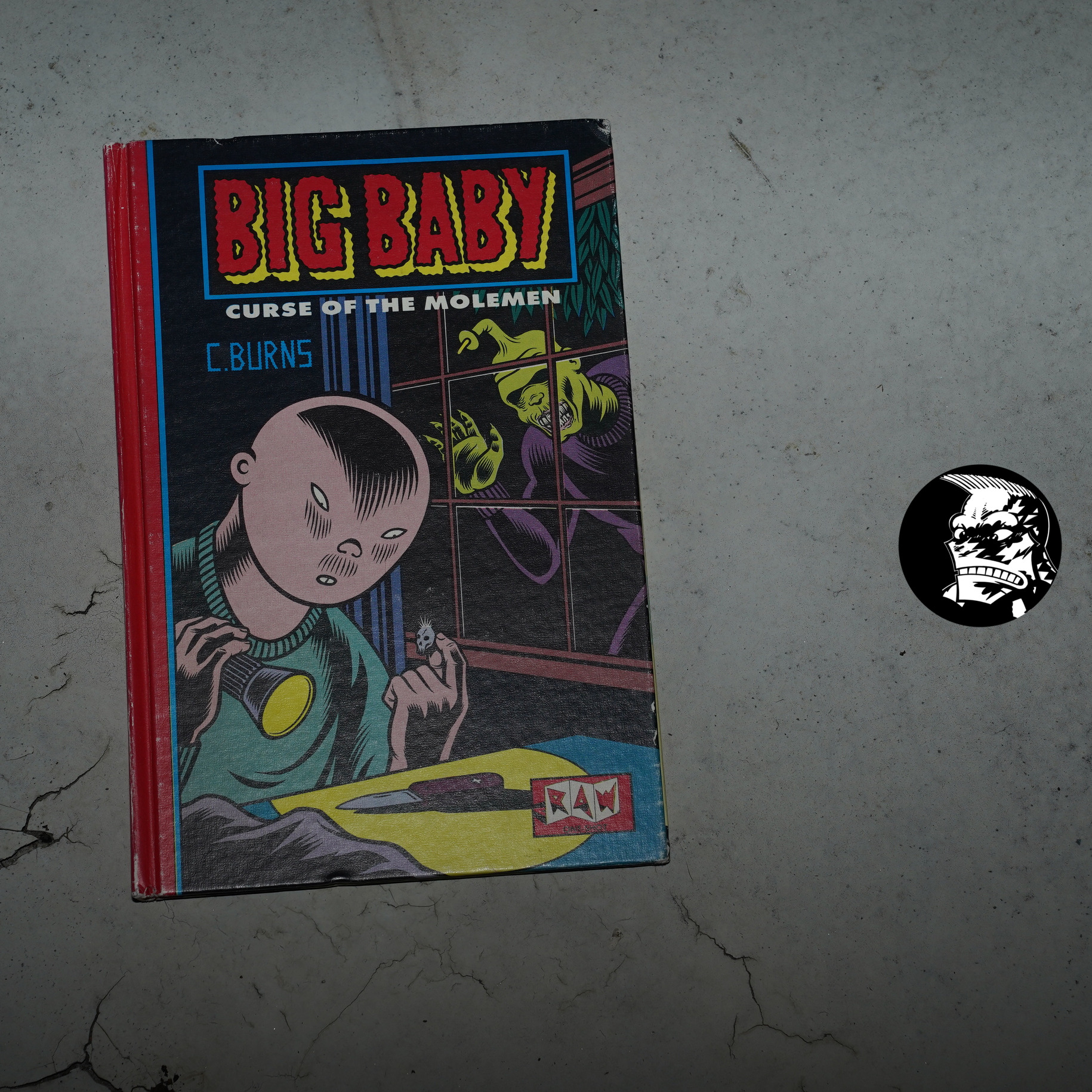 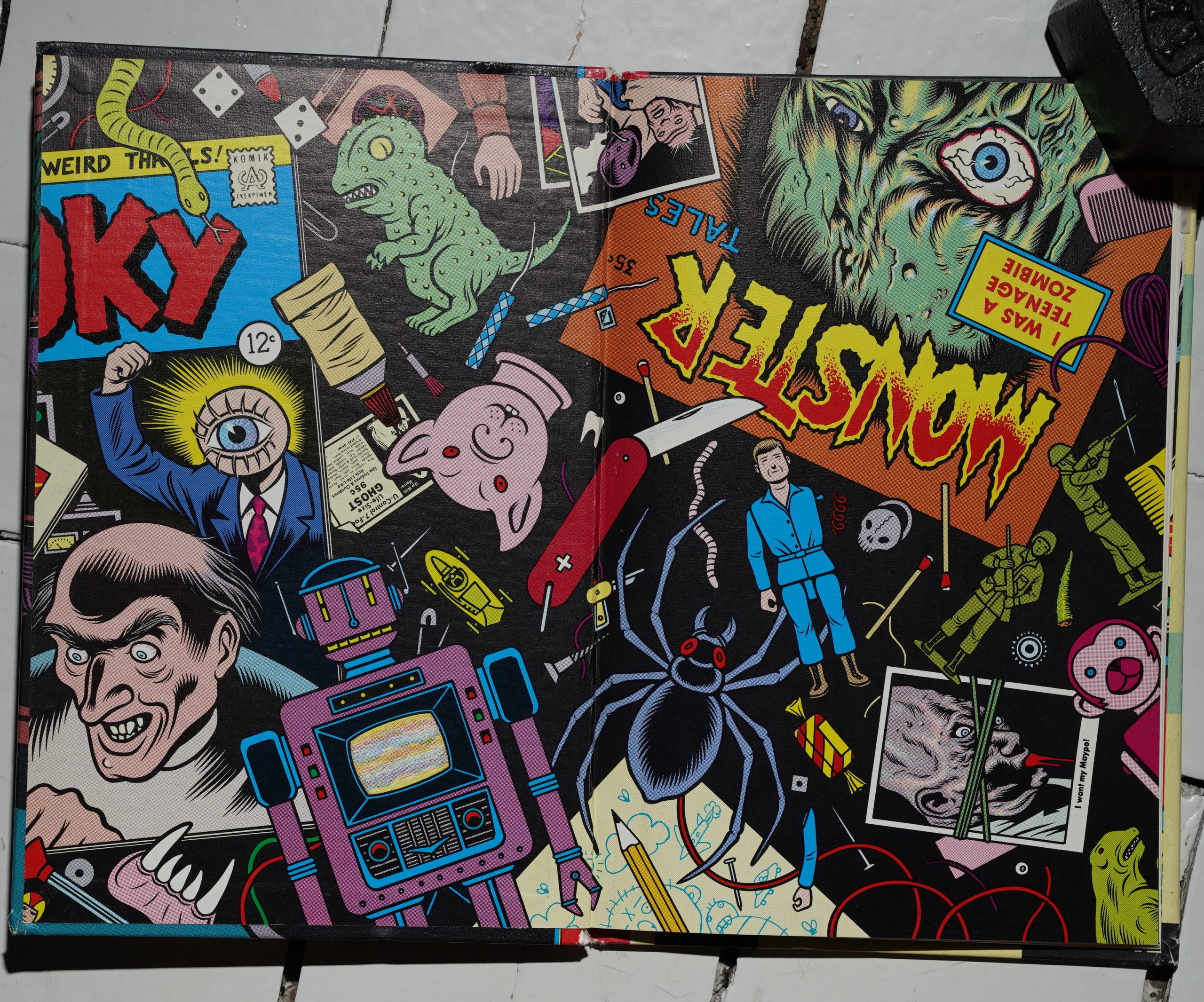 The end papers set the scene: We’re in a 50s child’s world. 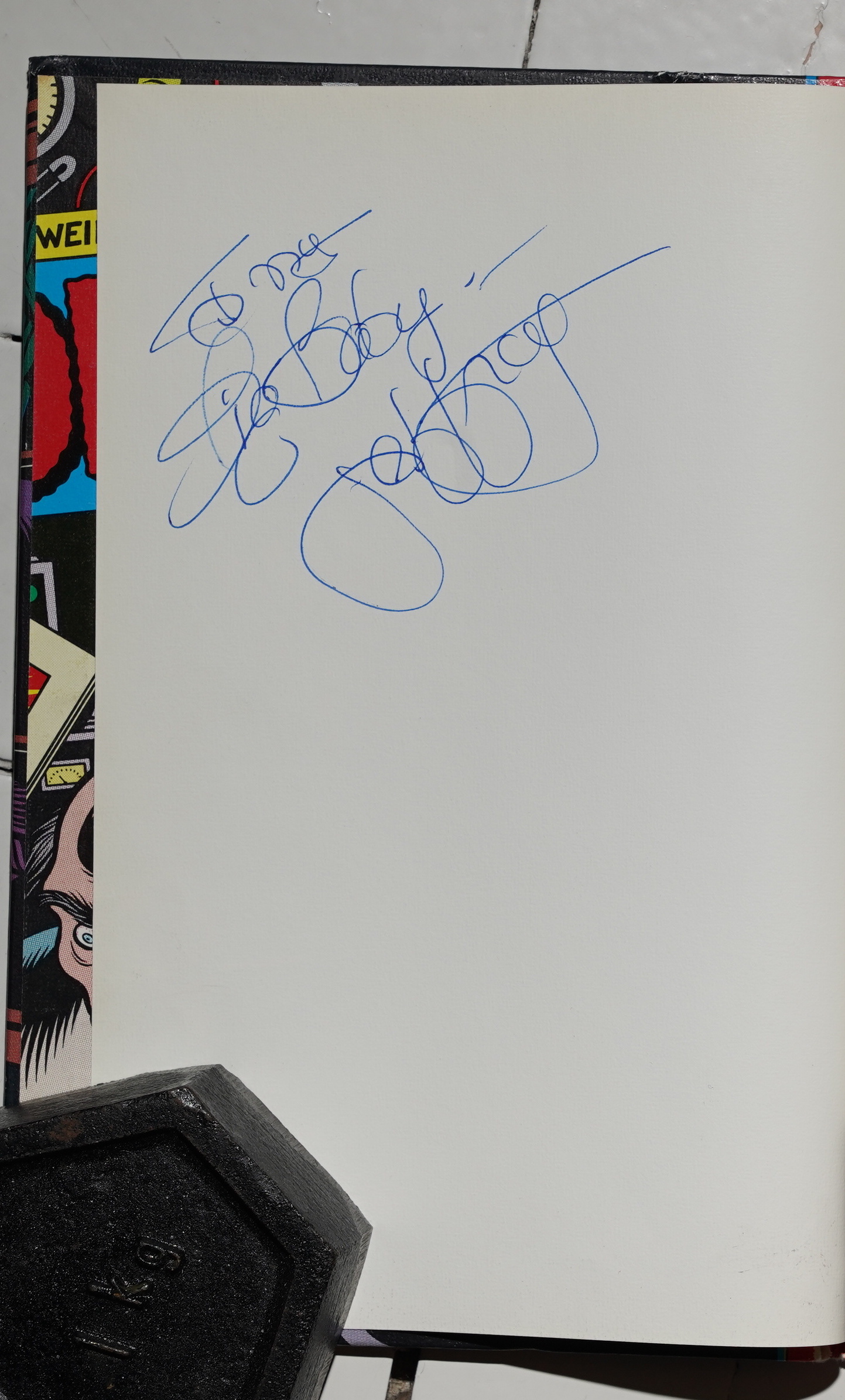 (I’m not sure whether snapping pics like this is an invasion of privacy or not, so I’ll just not mention even the possibility.) 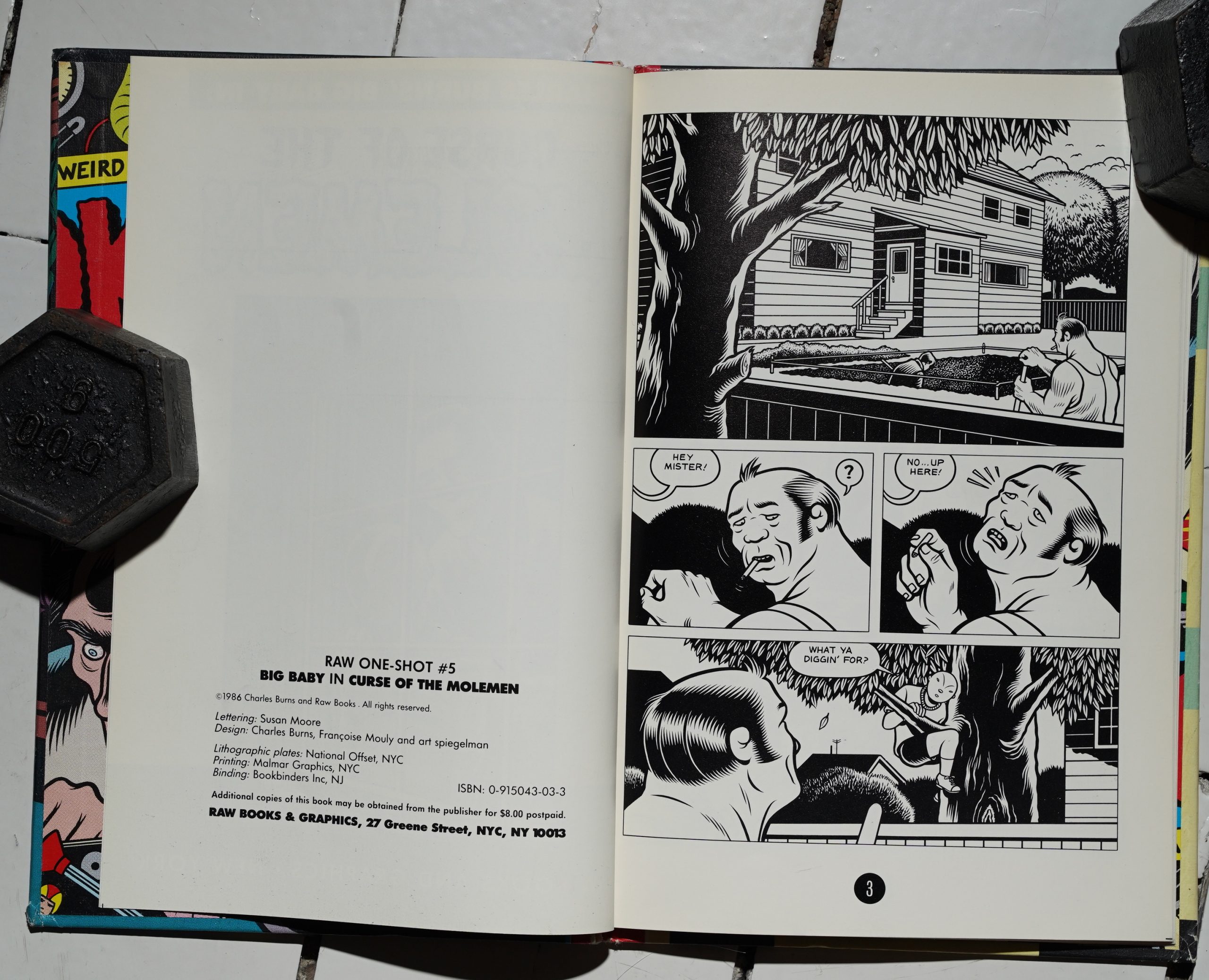 This is a little hardback volume, and it feels so well designed. Yes, it’s a very mid-80s design, with Futura and all, but everything, from the covers to the binding to the end papers to even the indicia and the page numbers just show the care and dedication that has gone into this. And the printing: It’s so razor sharp it feels like you can cut your fingers on those lines. 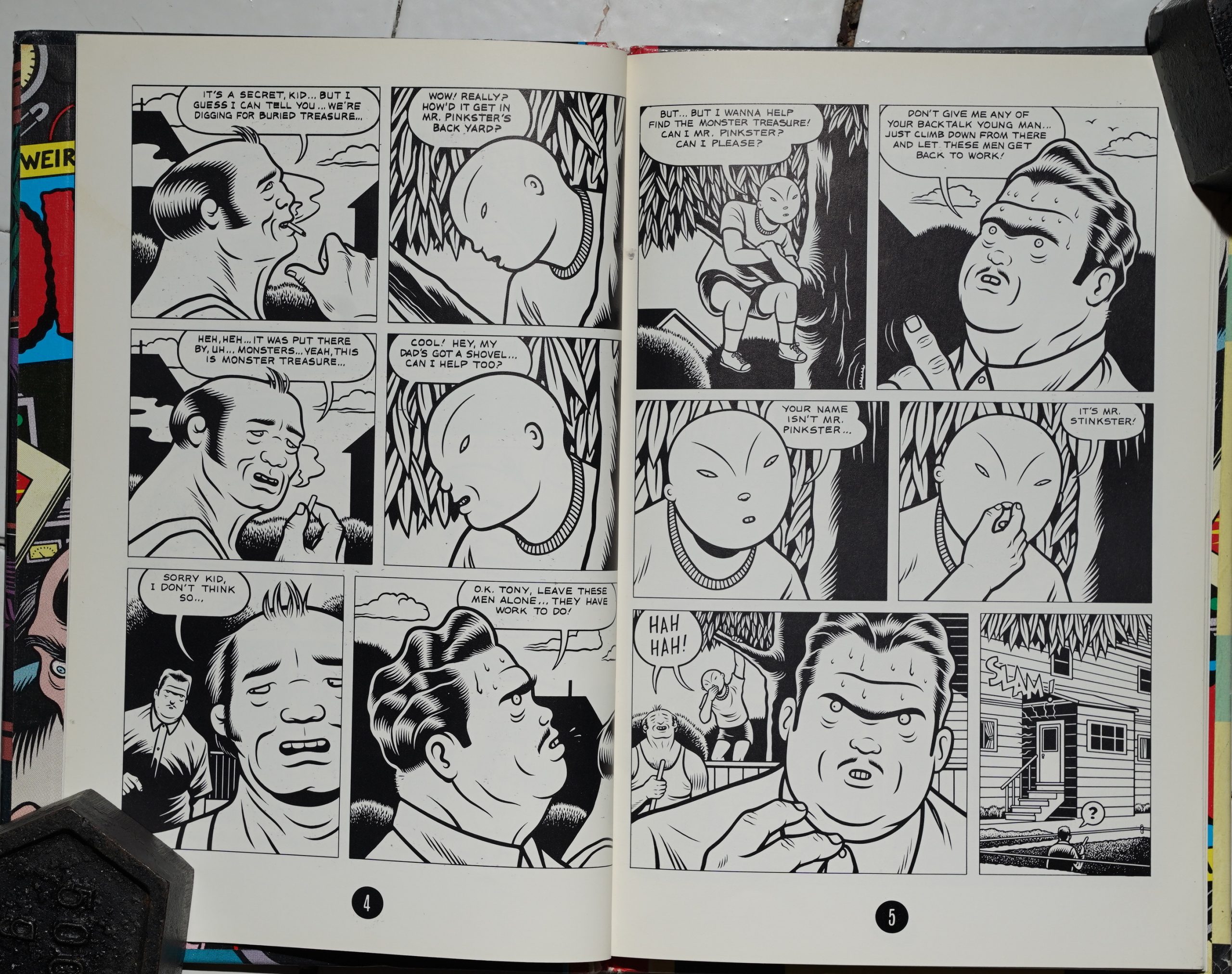 Big Baby’s insectile design is something to behold. 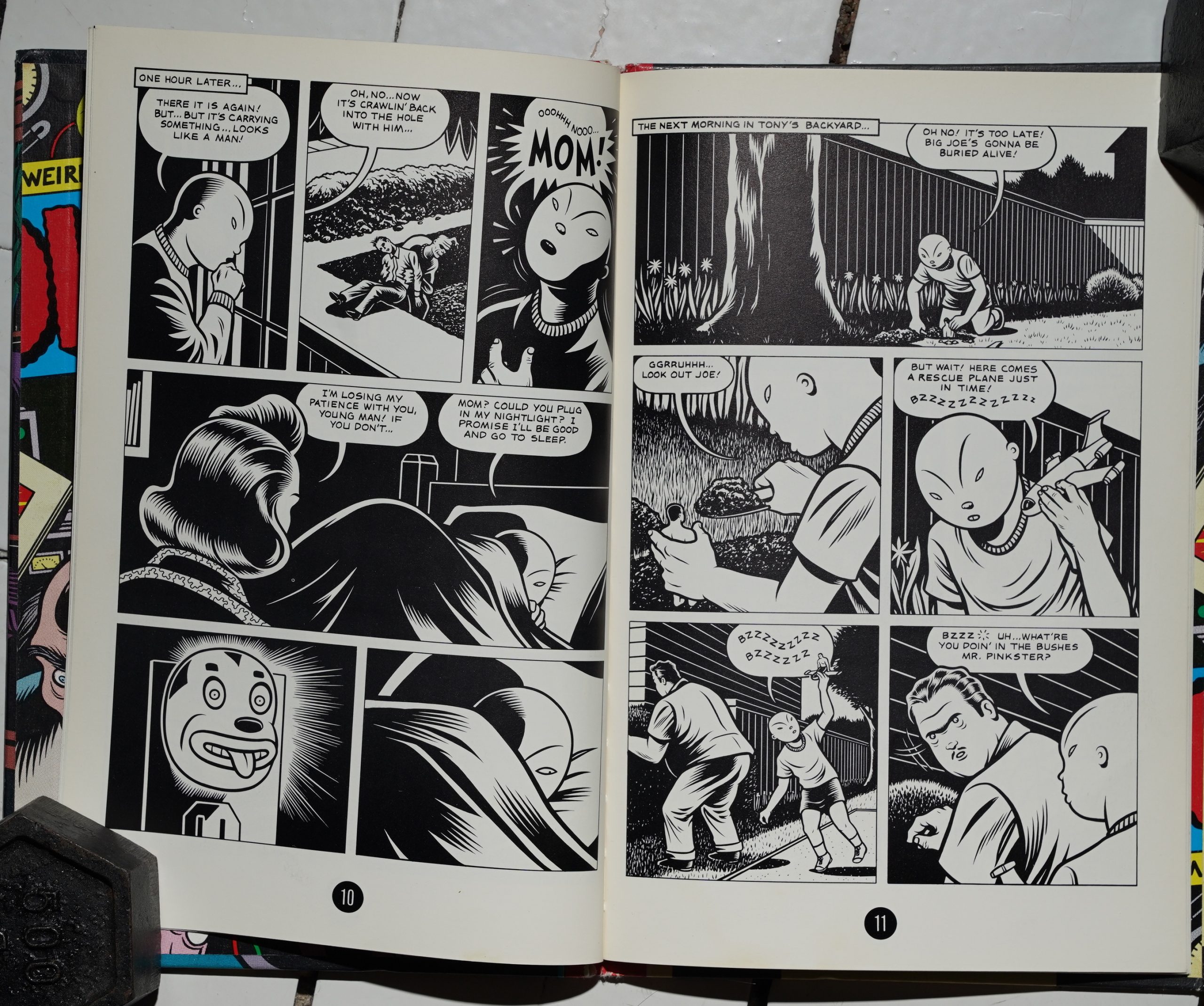 In some ways, Charles Burns was the odd man out at Raw — his stories are very 50s influenced and not very “punk” or “new wave” or whatever at all. But he’d be the odd man out in an Underground Comix setting, too — sure, he’s having fun with this material, but there’s also something unnerving about it all. This isn’t Eraserhead by any means, but it’s tapping into some of the same things. 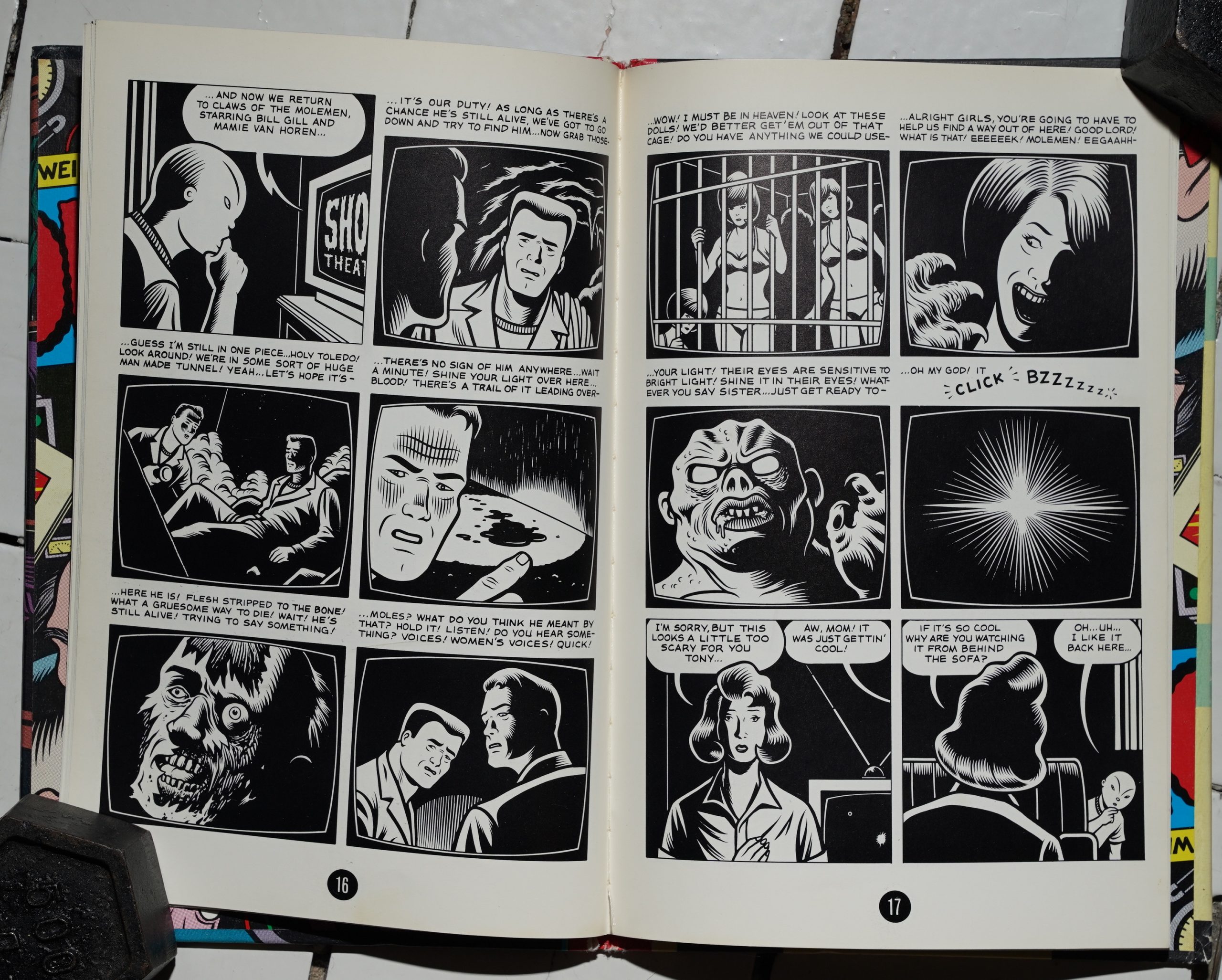 Some EC references in that lower left hand panel…

Anyway, it’s a solid read, and very satisfying as an object.

In Big Baby: Curse of the Molemen (a
recent RAW on&shot), Burns relates the
story of how a young kid (Big Baby, Burns’s
version of the typical American boy as
bizarro) witnesses the killing of a jealous,
wife-beating neighbor by the neighbor’s
downtrodden wife. Thisis the indirect out-
come of a plot which, as the schlock title
cleverly implies, promises a more conven-
tional follow-through of the story’s B-movie
origins. Burns initiates the Story from the
kid’s point of view—Big Baby sees a monster
crawling out Of a hole being excavated for
a swimming pool in the neighbor’s yard
and, later, sees the monster carry a human
victim back into the hole. We anticipate that
Burns will somehow deliver on the basic
horror storyvremise.
He does, but in shrewdly conceived, unex-
pected ways. Big Baby is a good example of
the displacement that occurs in the best hor-
ror stories. What Big Baby enconters When
he finally ventures down into that hole may
or may not be the product of a hyperactive,
hysterical imagination, but the horror of the
mean-spirited, suburban who
feels he has license to use his Wife as a
punching bag overshadows anything else in
the story. When Big Baby learns that the
Creatures are “lady monsters” Who kidnap
human males for their own sexual purposes,
the metaphor for the perversion Of natural
impulses within the constraints of middle-
class marriage is eerily brought to the fore.