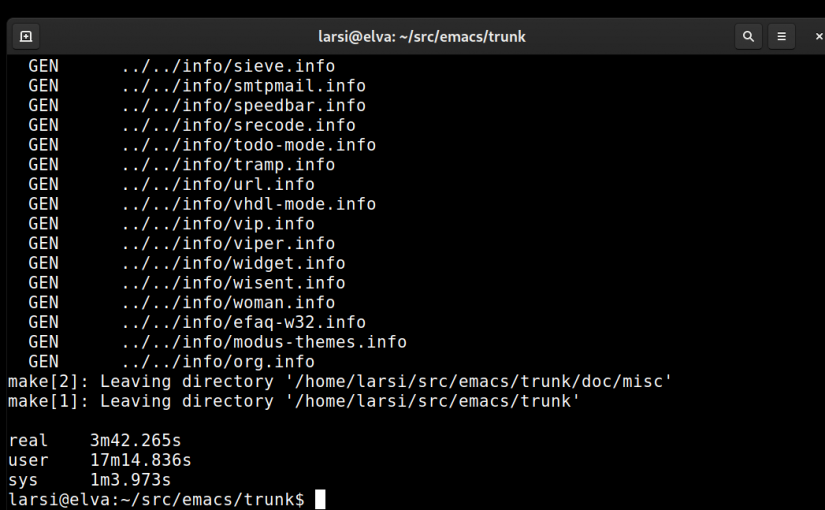 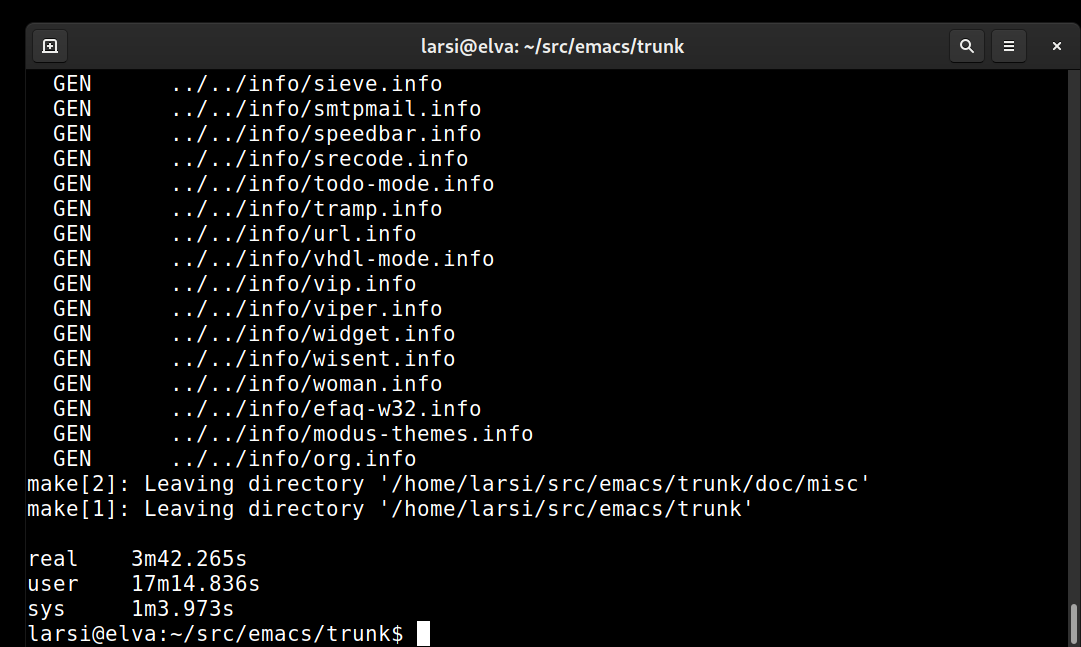 I while back, I was rather impressed with the new M1 chip from Apple, so I wondered what Intel’s response to all that was going to be.

I mean… the Apple laptop was more than twice as fast as my Lenovo Carbon X1, and that was just pitiful.

(On the only thing that matters for people (I’m assuming), which is saying “make bootstrap” in the Emacs development tree.)

So today I got the 9th gen Carbon with the new “Evo” branding from Intel. I got the model with the fastest CPU, as I did with the previous laptop.

All runs are “the second consecutive run” to see whether thermal throttling happens — but benchmarking is hard, dude. When the Intel laptops are plugged in, they throttle the CPU a lot more, presumably because charging the battery makes stuff hotter, so the fan can’t keep up, and the CPUs throttle? So I included runs both plugged and unplugged for the Carbons. (It makes no difference at all for the M1 laptop.)

It’s very variable on the new laptop. From 3m41s to 5m20s, so it’s all about the throttling, I guess? The old Carbon wasn’t this variable, but I guess this means that they CPUs they’re using now are really kinda too power hungry for this laptop: If you have a long, steady load, it’ll thermally throttle the CPUs down to performance levels that are close to the previous generation. But if you’re just doing something that’s quick enough that throttling doesn’t kick in, it’s a lot faster. Everything does feel snappier when using the laptop interactively.

I hear you going: “Yeah, Lars, it’s totes amazeballs that a 3GHz CPU is actually faster than an 1.8GHz CPU… you’re so clever…” But the point isn’t that Intel hasn’t made faster CPUs before — but they haven’t made fast CPUs that you can fit into a 1.1kg laptop before: The 1.8GHz/4 core CPU was the best there was for this laptop last year.

So in the competition against M1, it looks like they’re starting to get there? I mean, this top-of-the-line ultraportable Intel laptop is now only two thirds slower than the beginner-entry Apple M1 laptop.

Sometimes! If you don’t load it for a long time!

Or to sum up: Intel’s still pretty depressing.

2 thoughts on “The Only Evo Benchmark That Matters”