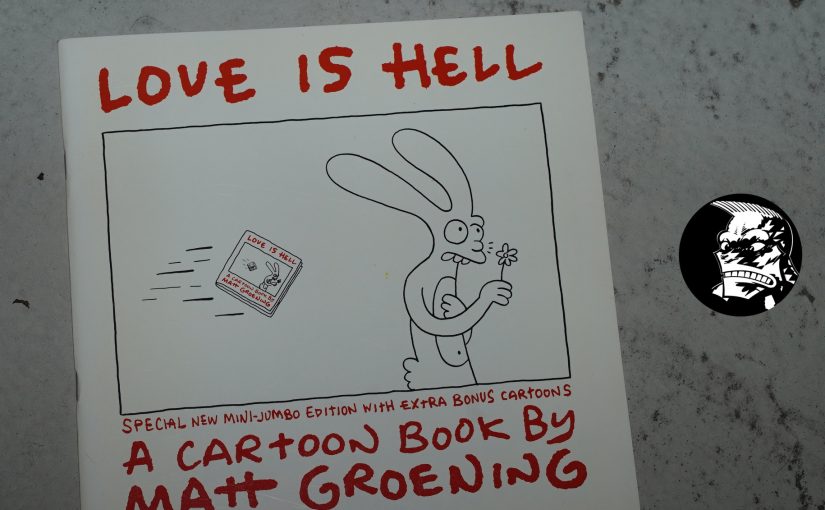 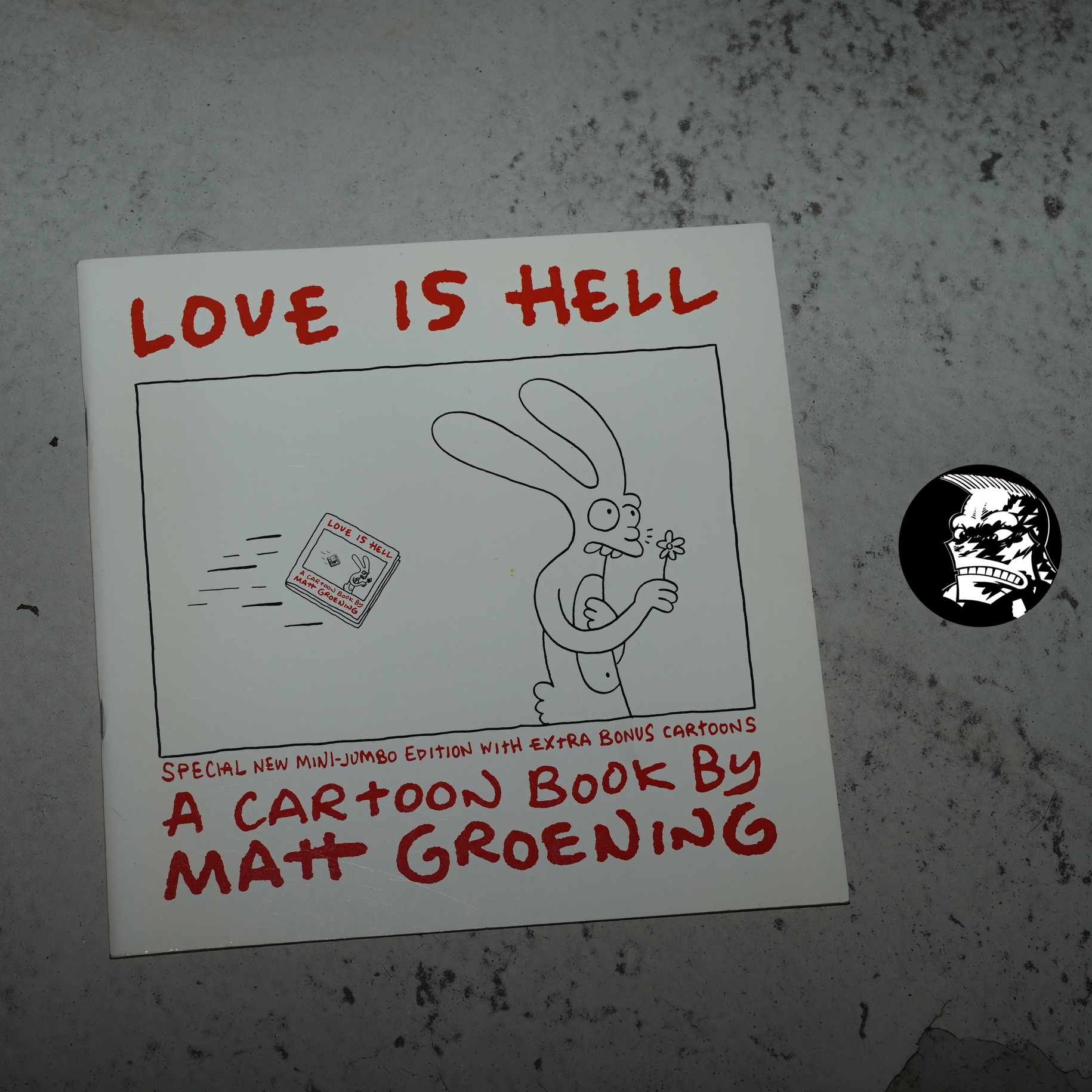 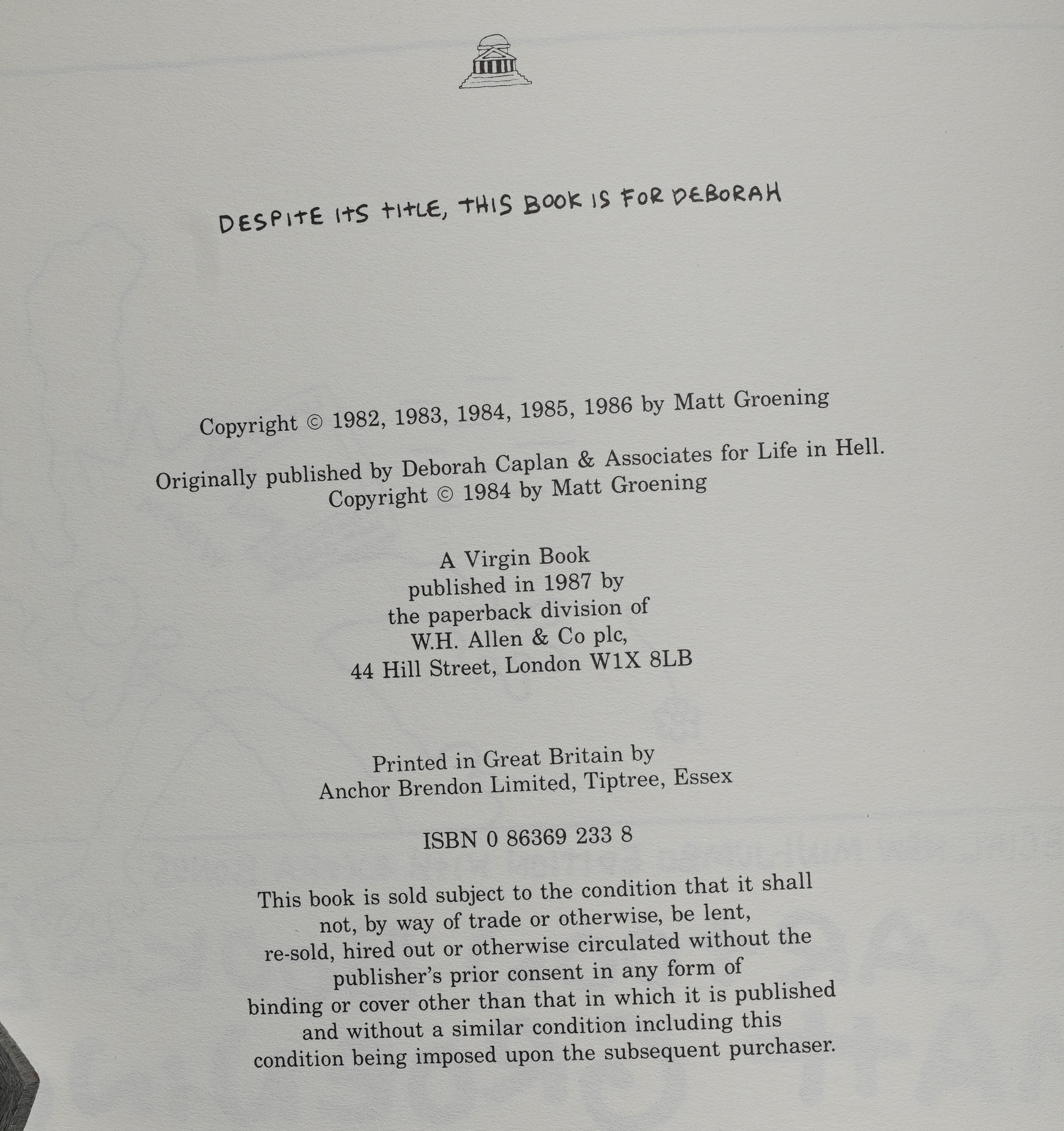 This is so weird — I’ve got the British edition of the expanded Pantheon edition of the Caplan collection. What’s so weird about it is that it’s from 1987, when I was 19, and I could have sworn that I had this book when I was like 16. But I definitely didn’t buy two editions of this, so my recollection of reading Life in Hell in high school is false!

I know, very interesting for y’all, but perhaps there’s something about Life in Hell that gives an impression of having always been in your life…

Looks like the original (shorter) edition of this was in black and white, and only 32 pages. This one is 48 pages, so (according to some of my mathematician friends that I’ve consulted on this matter), that means that there’s 16 additional pages. 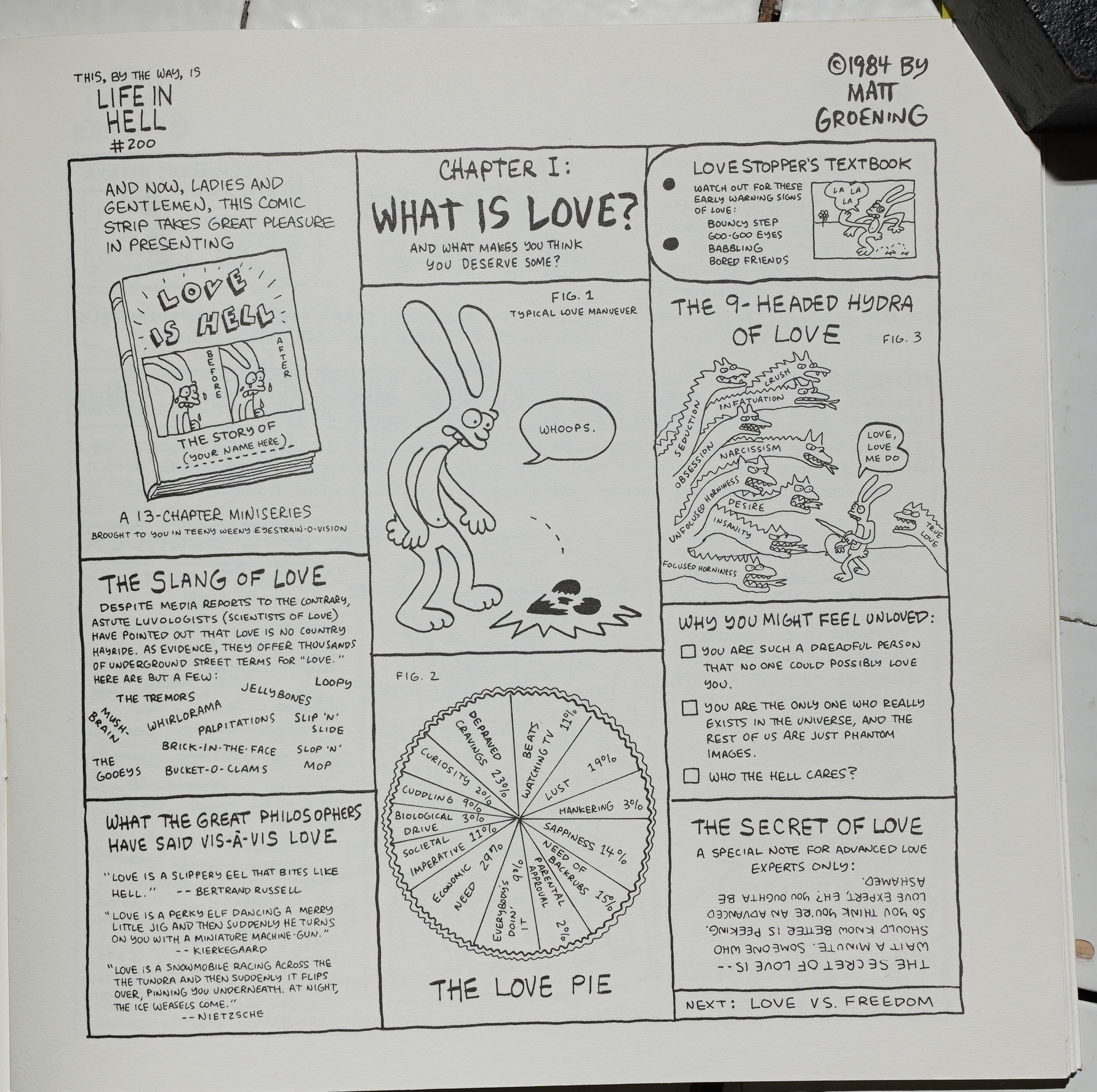 We start off with a thirteen part series from 1984 about lurve. 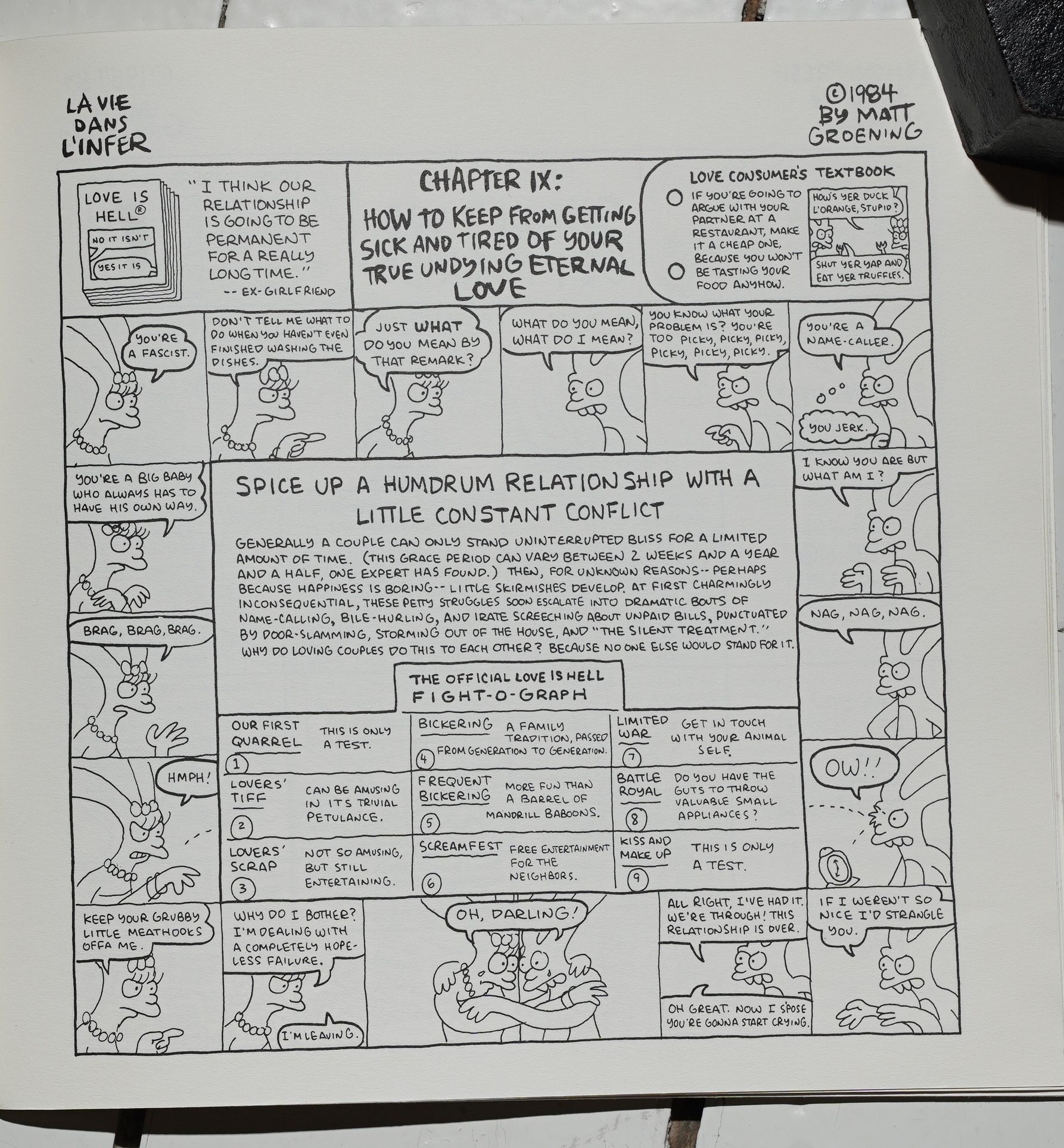 It’s a quite dense serial — very text heavy, with a number of different fun storytelling techniques. It’s a slightly odd commercial decision, perhaps, but it’s also kinda appealing to a more adult audience: One with patience to read all of this, which I kinda doubt an audience in 2021 would find attractive in the same way.

I love it, myself. 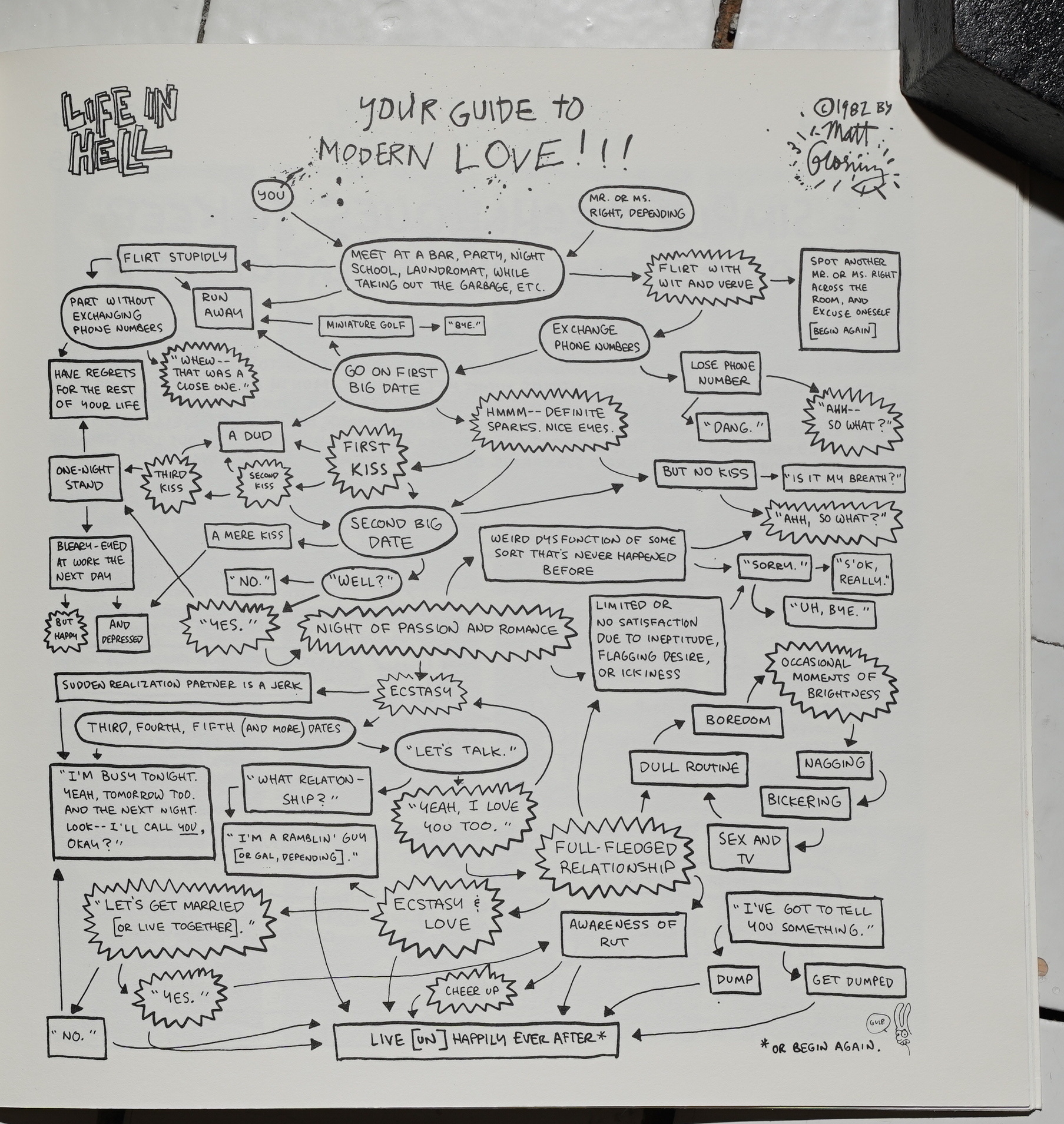 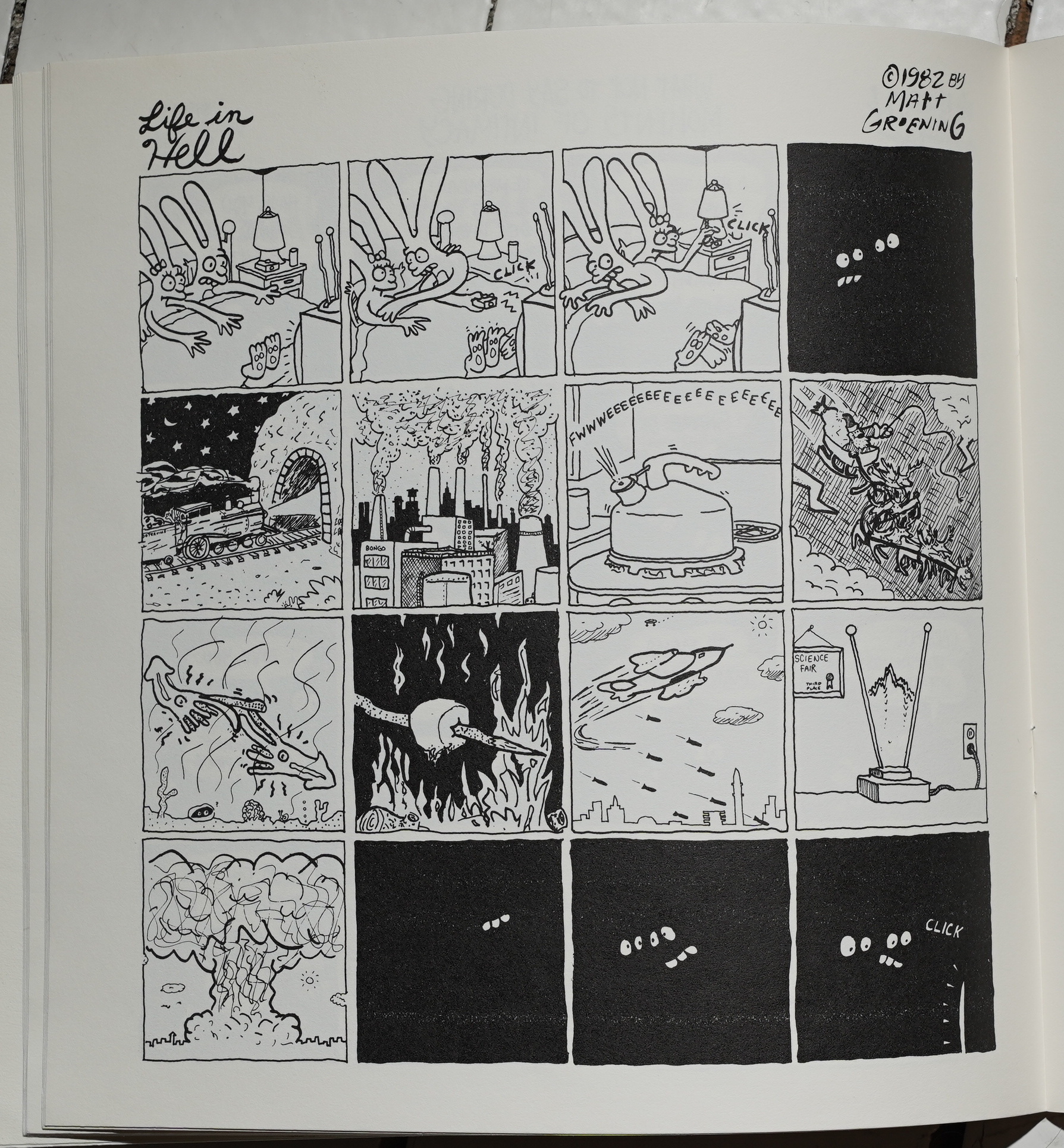 Thinking about Life in Hell, the more simple pages come more readily to mind, but Groening also didn’t shy away from doing pretty intricate cartooning, either. 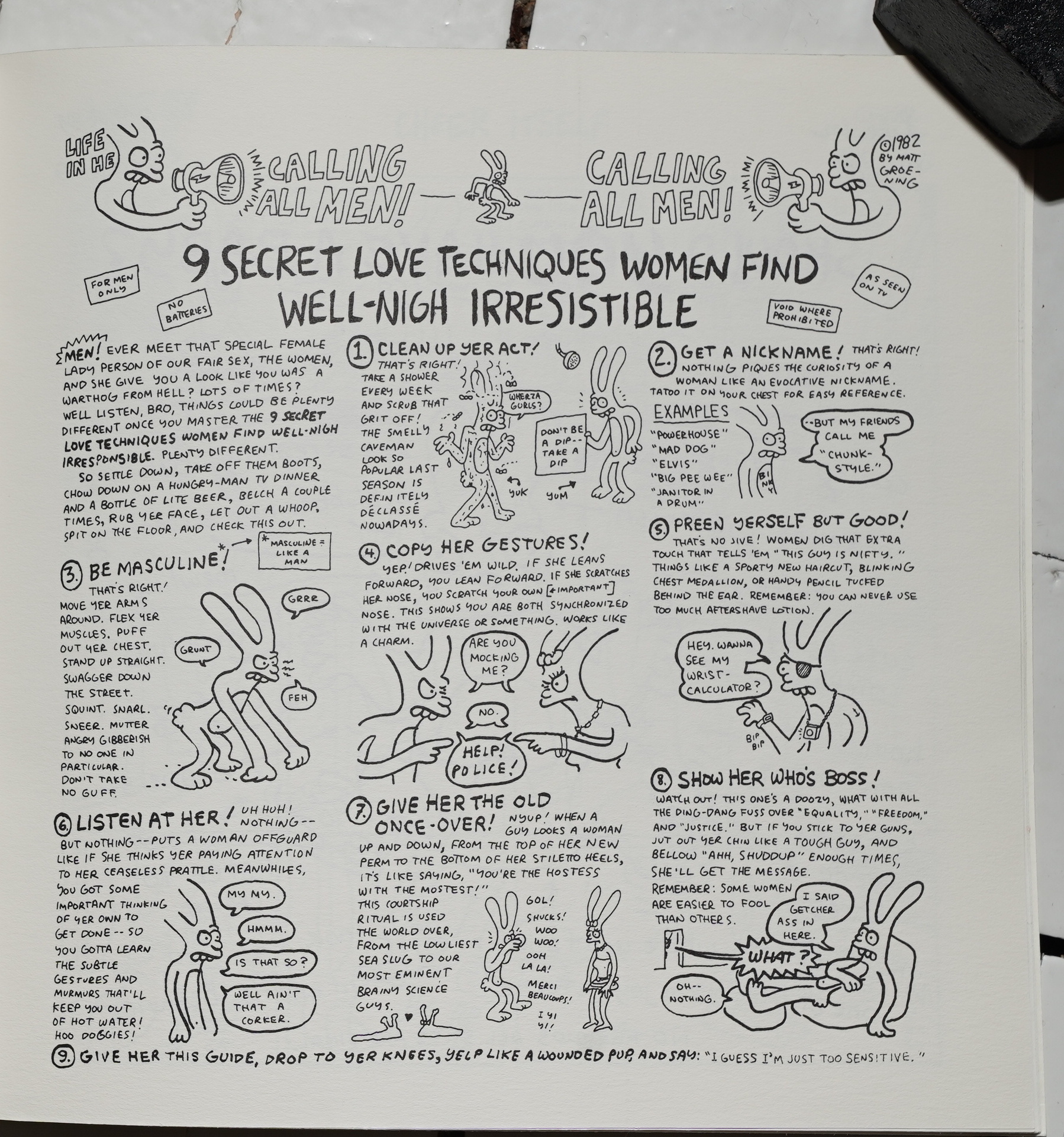 Groening could have become the Jordan Peterson of his time. 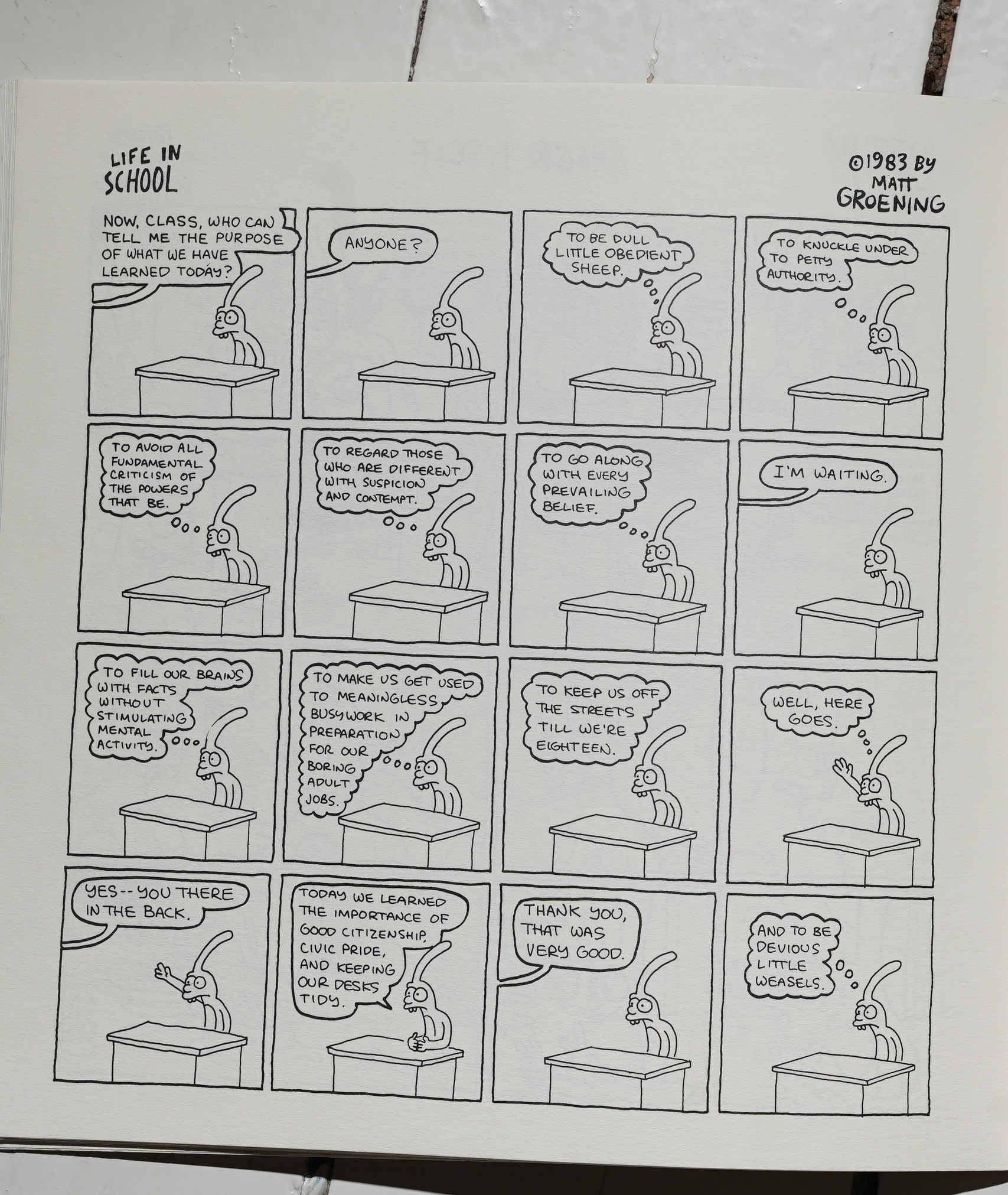 Finally, on page 26 (that’s over the half-way mark, for you mathematicians out there), we get the first strip with one of the continuing characters: The one-eared boy bunny. (His name is Bongo, we learn later.)

And that’s also a surprising decision (to me) — readers love continuing characters. They can identify with them, or sympathise, or whatever… but on the other hand, the book is called “Love is Hell”, so concentrating one subject also makes sense. Perhaps this is part of the additional pages added for the Pantheon edition? 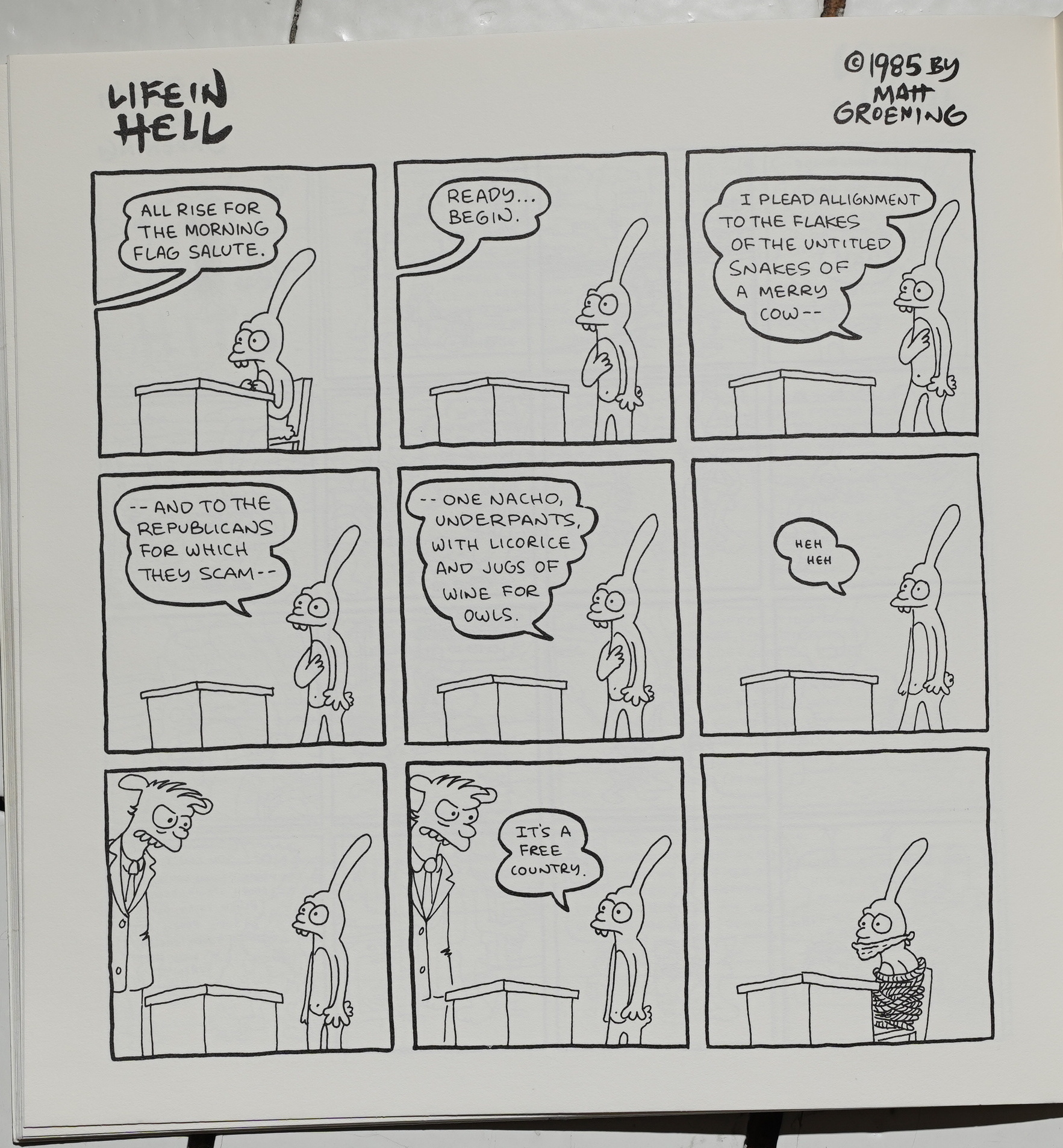 This one is, at least — it’s created the year after the original edition, and things become a lot more streamlined in these newer cartoons, and we start seeing templates that Groening would use with small variations for the next few decades. 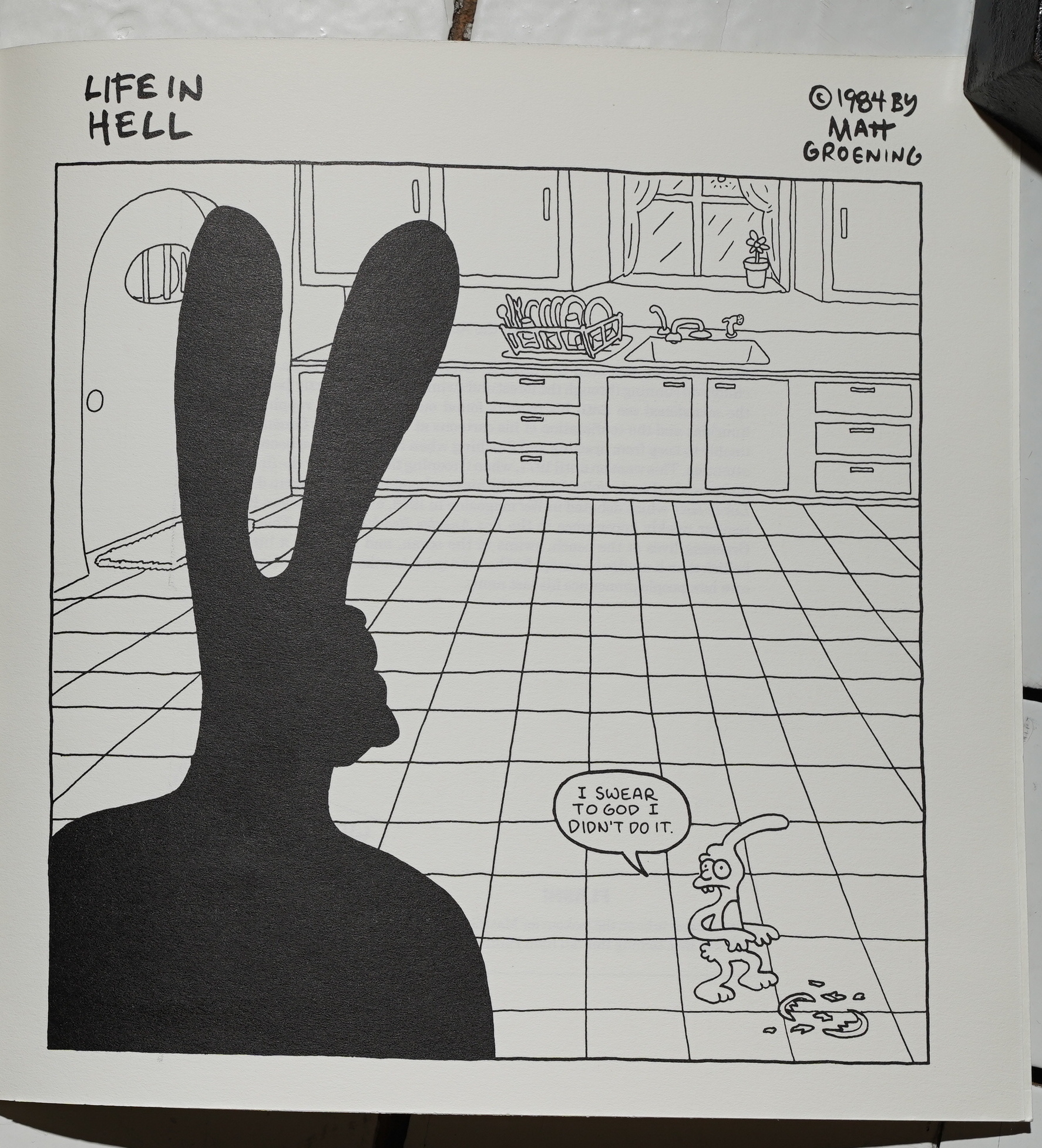 Here’s the most iconic of them all — this one was on everybody’s fridge in the 80s, right? It’s visually very striking, it’s funny, and it’s unnerving.

I guess I was saving the best for last. For
those not fortunate enough to live where
Matt Groening’s syndicated Life in Hell is
availablea should explain that it’s a strip
which appears ‘in alternative newspapers
around the United States, and Love in Hell
is a trade paperback reprinting some of the
best episodes from its five-year run, in.
cluding the 13-part series “Love in Hell,” an
in-depth examination of humankind’sofaüo-
rite sport.
The only «:omic which matches Life in
Hell for the acutenessof its observations is
Love and Rockets and I guess I can’t think
of any higher praise than that. Purposely
text heavy, the drawings are simple but clean
more than adequate. Groening leaves
stones unturned as he presents a richly
comic guide to modern romance. “Watch
these early warning signs of love:”
advises . the first installment of the Love
Stoppers Textbook, “Bouncy step, goo-goo
eyes, babbling, bored friends.” From the
same strip we learn “What the-great philo-
sophers have said Vis-a-vis Love” including
Nietzsche: “Love is a snowmobile racing
across the tundra and then suddenly it flips
over, pinning you underneath. At nighc, the
ice weasels come.”

But the book’s finest moment comes on
the very last page/ wherein Binky, the rab-
bit hero, takes on The Meaning Of Life itself.
That inner voice repeats those nagging
messages of doom “You’ll never make it, give
up now, youll be sorry, itk all meaningless,”
Meanwhile, Binky.. .well Binky lives, going
to school, getting married, raising a family,
climbing-the highest mountain. In the last
panel Binky has died, after living a full, rich
life. “Aha. Told you so,” says the voice.
Heavy, man, heavy. This single Comic
strip captures the awesome paradox that fills
every moment of life, the knowledge of
death, and the fact that we only realize what
happiness is ‘hen we’reunhappy. .unless
we’re lucky.
Groening’s work is a triumph of content
over form. AS much as I love isilliness and
manic absurdism (God knows I’ve used
those •veéy words enough Fimes in this
review), Love in Hell makes you think while
you laugh,- too. Not bad for a simple comic
strip ,about a silly looking rabbit.