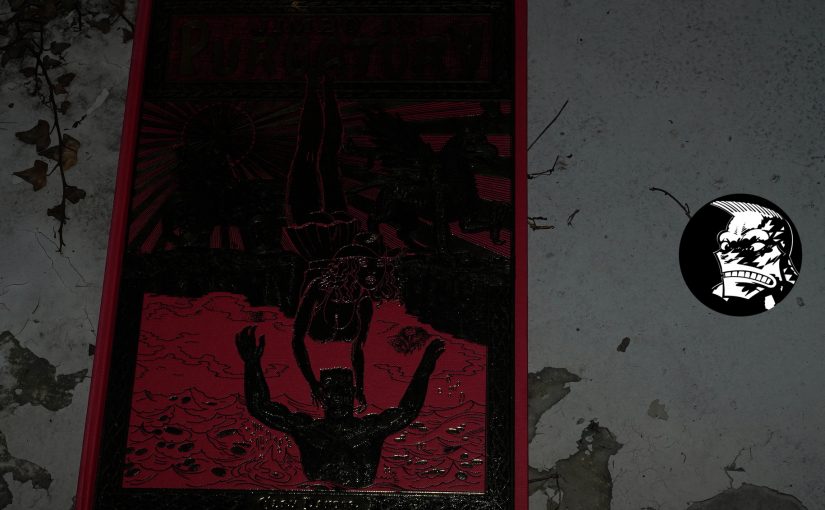 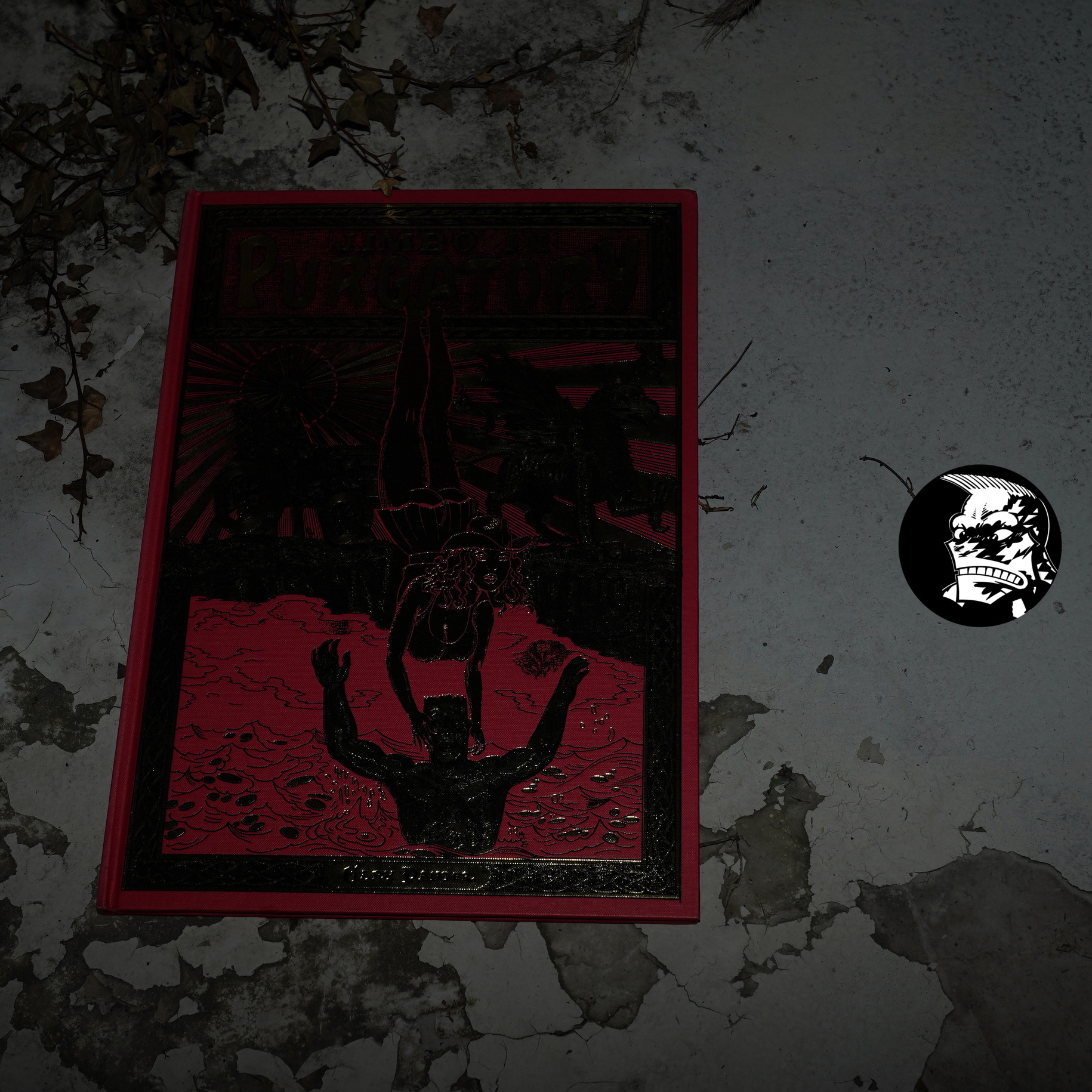 This huge book took Panter a few years to make — started in 1997, and the introduction was written in 2001: 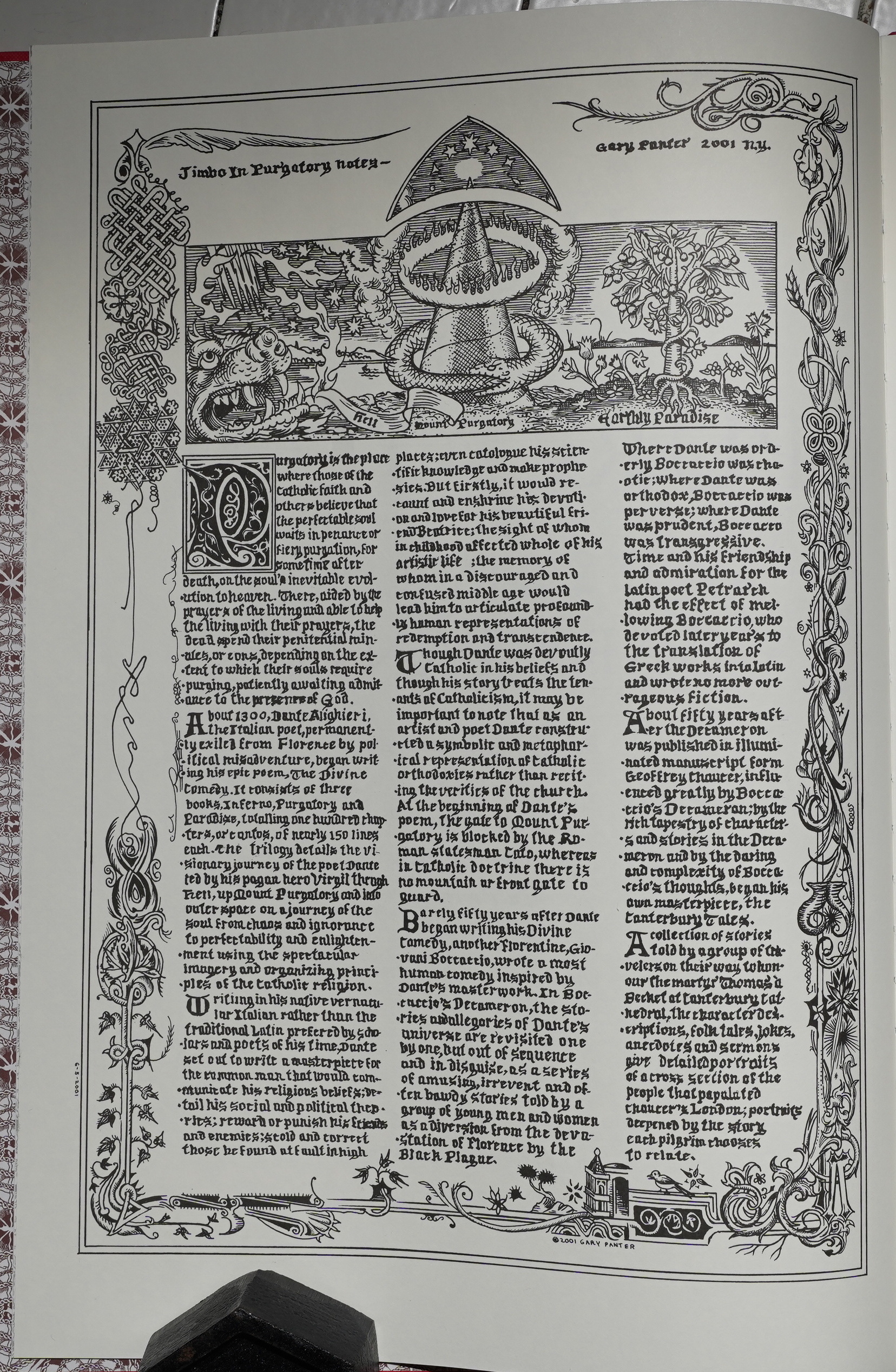 And it’s obvious that Panter’s put a lot of work into this. 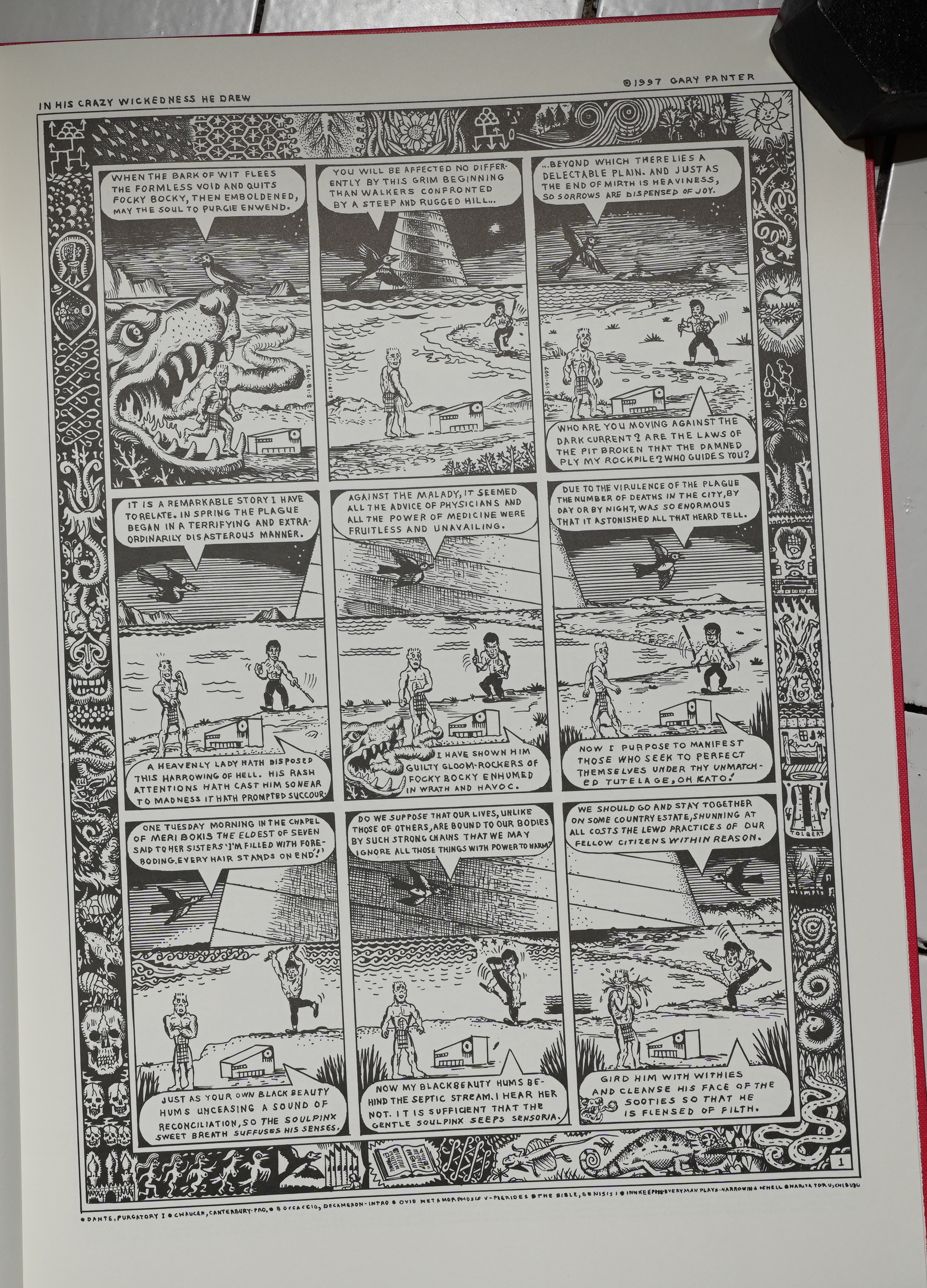 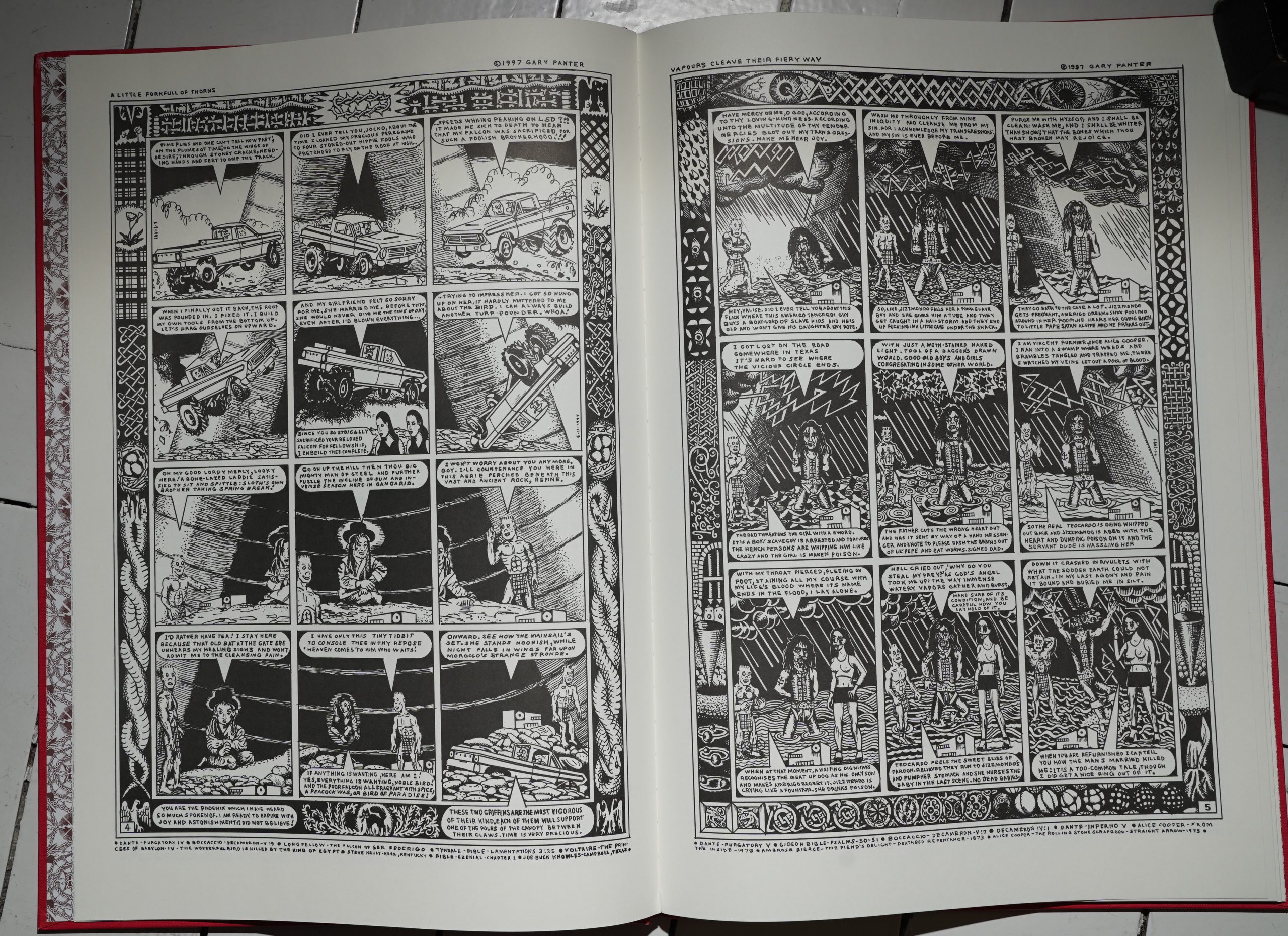 But it’s totally not my kind of thing?

Panter apparently took all these references and distilled them into one single page, and … it kinda reads that way? It’s very dense. 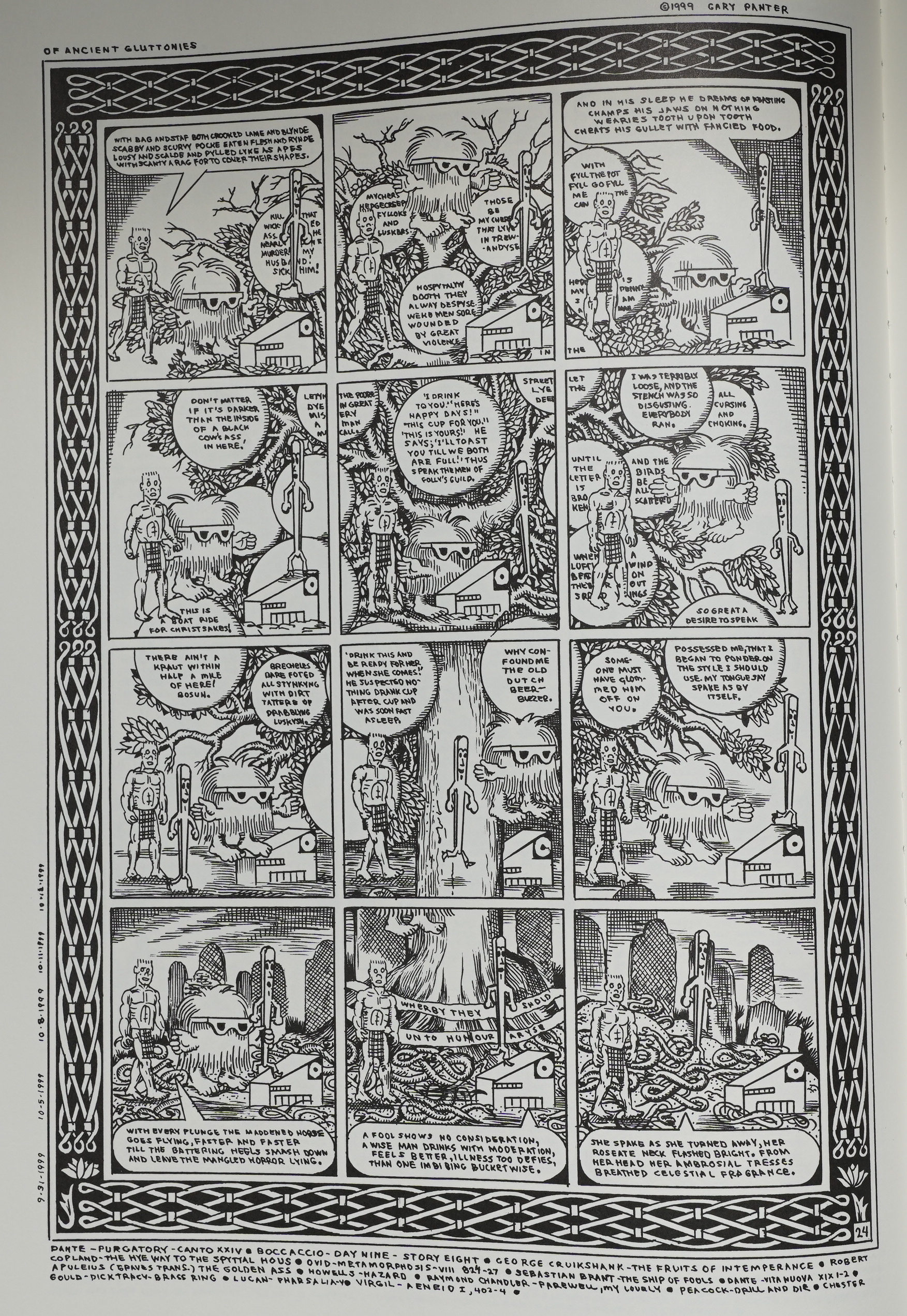 While I was gearing up to write about
Gary Panter’s epic Jimbo in Purgatory,
the critic Andrew D. Arnold posted his
2004 “Best and Worst” comics list at
Time.com. purgatory was Arnold’s choice
for the year’s worst, primarily because
the book is “so impossibly dense I doubt
anyone with less than a Ph.D. in classical
literature Will be able to parse it. NO fun.”
Has Arnold ever read an Archie di-
gest? Or one Of those vanity projects that
advertise in this very magazine? Purgatory
is leaps and bounds better than these, and
I can only assume that Andrew misses
its virtues because he prefers comics that
have easily-digestible stories. Purgatory
is anything but immediately accessible.
Almost all of its text, and many of its
Images, allude to sources as diverse as
Dante, The Decameron, Raquel Welch
in One Million Years B.C. and the ‘zine
Ben is Dead. In his introduction, Panter
cites Joyce’s Finnegans Wake (!) as a pri-
mary inspiration for Purgatorys referen-
till thicket. This is not a comic for
casual readers or those looking for con—
ventional “fun.”
For me, the joys Of Purgatory have
nothing to do with story. Purgatory is
instead the culmination of Panter’s shift
away from narrative and towards the
sensuality Of the eye. In his first Journal
interview (issue #100), Pancer rhapsodi-
cally philosophizes about the mark— the
smudge on the page Without representa-
tional or narrative meaning — and his
medieval high culture and 20th-century
low culture collide as Jimbo meets Alice
Cooper, Boy George and (most stunning-
ly, in a full-page portrait) Eve-as-pun-
kette; but the margins create stable back-
grounds and symmetrical designs that
anchor Panter’s postmodern pastiche. Art
this ambitious and ornate shouldn’t be
dismissed with a U worst” label.

I certainly agree with that, but if I’m to sum up that review, I think it’s “Philistines! Philistines!”

And I note that he doesn’t really have anything interesting to say about it either other than “nice art, dude”. (I’m paraphrasing again.)

The Philestine writes in The Comics Journal #270, page 11:

REDUCTION OF THE INCOHERENT
TO the Editors:
TO answer Craig Fischer’s implied question (“Honorable
Mentions,” T CJ #266) — DO I really think that Gary Panter’sJimbo
in Purgatory is the “worst” comic/graphic novel of 2004? — Cer-
tainly not. Clearly every year sees innumerable books Of so little
ambition and merit that even calling them the “worst” would be
giving them too much attention. A work Of art that strives and fails
to achieve greatness, as I believe Mr. Panter’s does, has far more
integrity than any of those. Calling it the “worst” is just a function Of
the editorial mandate ofa “Best and Worst” list “Best and Biggest
Failure” doesn’t sound as good.
I think-Jimbo in Purgatory fails because it denies its audience a
key function of its form: readability. Note that by “readable” I do not
mean “easy to read.” A challenging narrative can be fun and reward-
ing, but here Panterhas crossed a threshold and created something
more appropriate to exegesis than entertainment. Jimbo in Purg
cannot be read in any involving way. It can Only be looked at.
Noticeably M r. Fischer’s review concentrates almost exclusively on
the visual aspects Of the book. WereJimbO in Purgatory presented
on the walls Of a gallery, rather than a book, it would be inarguably
remarkable. But in its chosen form, with the pretense of a story and
characters but no reasonable entrée into them, the book fails in
spectacular fashion.
Sincerely,
Andrew’ D. Arnold
TIME.comix
http://www.time.com/comix

KELLY: Who be printing the
Purgatory book?
PANTER: I think Fantagraphics is going
to publish it. I hope. NO progress has
been made toward actualizing it, but I
think it was planned for next year.
KELLY: HOW long it be?
PANTER: a 32-page story basically,
but with end papers and stuff like that. I
drew it big, and it was a really hard comic;
it was a willful folly, With the idea that
really my comics come just as much out
of painting activity as they do out of the
practice of comics. The thousand or so
people who like my stuff are really intefr
ested in what it is I’m to do next,
and I am interested in ‘changing things
around, trying Something else, ‘ taking
some system and applying it to a comic
book or a story and see what happens.
peQPIe could argue that your Stuff
is Willfully unclear at times, and that’s Part
ofpgr . Iin nor going to say “charm, ”
but —
PANTER: Yeah, that’s one thing do.
That’s more what I do, in a way, is
change, surprise you, do something else.
But I think the thing is, I’m not trying to
fool people. I’ll change stations on you to
get your attention again. Most people are
very consistent and they have white space
in comics, and they have heavy outlines,
clear and smooth. I’m spazzier than that.
can be pretty controlled, but there are
limits in my ability to tighten up.
Anyway, the Purgamry comic was a
project that was very systematic. It had
this crazy system that I employed to
determine what was going to happen
where in the comic — like a game theo-
ry. I could explain that, but it sounds
really high-flown.

It’s an ambitious failure. And in the last ten years since its publication, there has been nothing like it.

Here Jimbo encounters Frank Zappa, John and Yoko, robots and dragons, among others, and each character is a stand-in for a personage in Dante’s Divine Comedy . They each quote a fragment of text (cited at the bottom of each page) that furthers the plot. It’s a complicated, often hilarious method of dialogue, combining poetic allusiveness with surreal game playing.