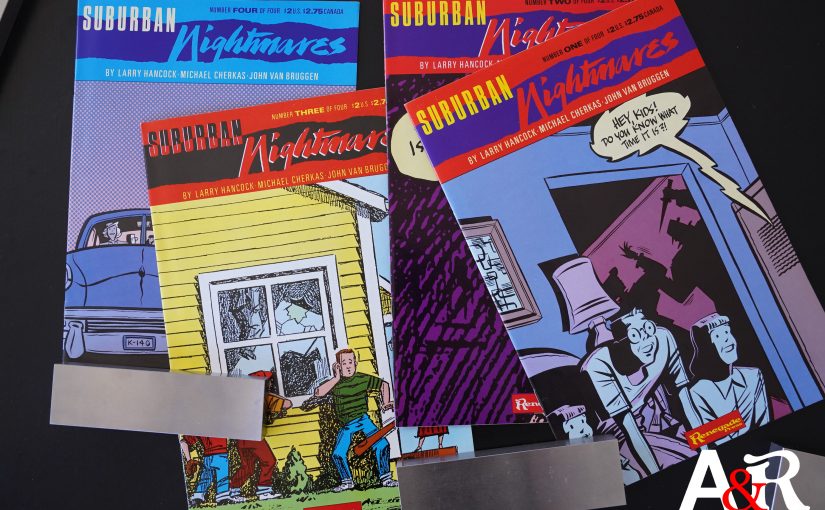 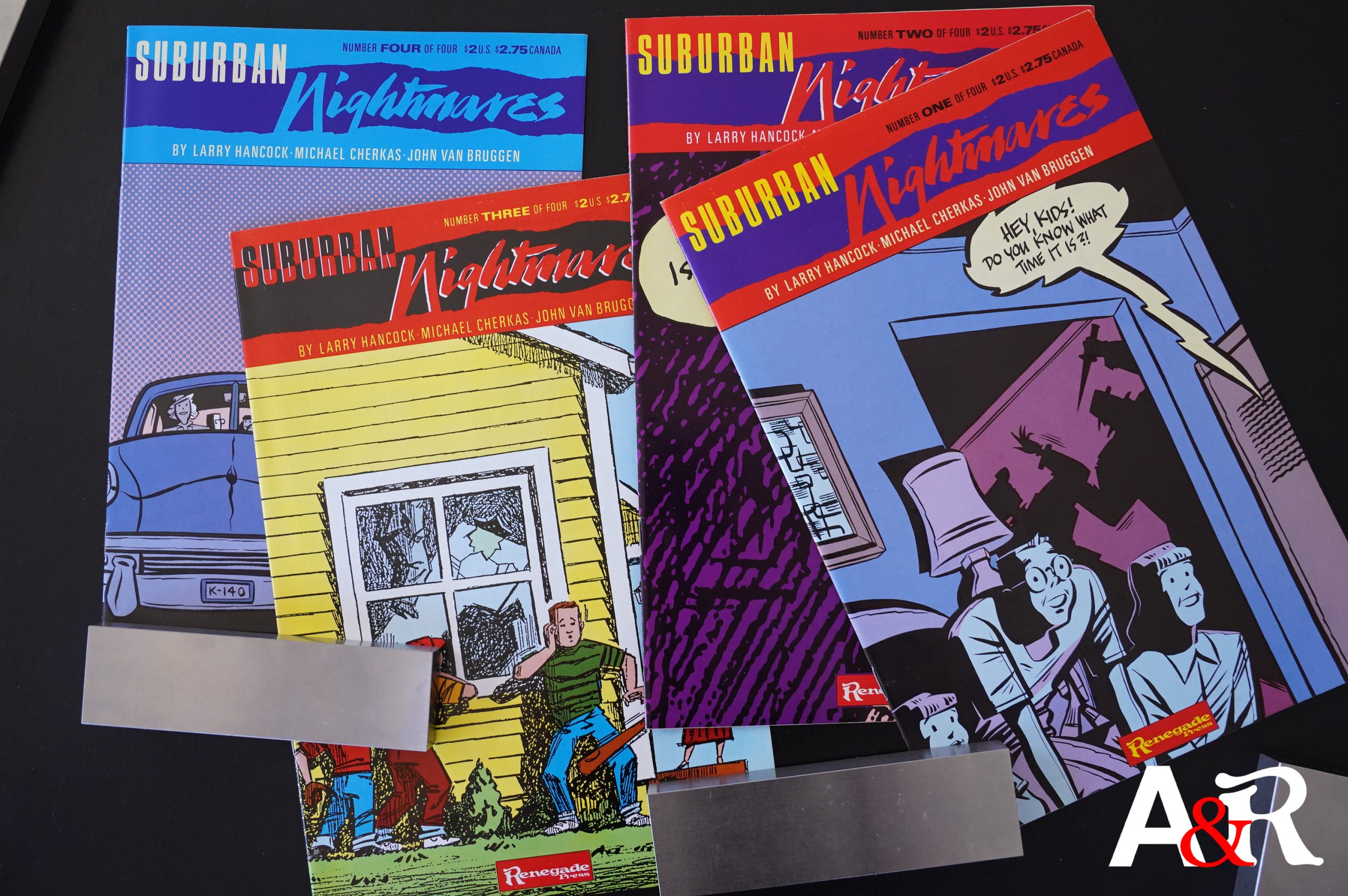 One of the more successful (both commercially and critically) comics at Renegade was The Silent Invasion — so this is a spin-off off of that, sort of. That is, it’s the same creators, working in much the same milieu. And this was published over two months as a bi-weekly series, which meant that the comics shops had to order in the entire series before seeing how the first issue sold. 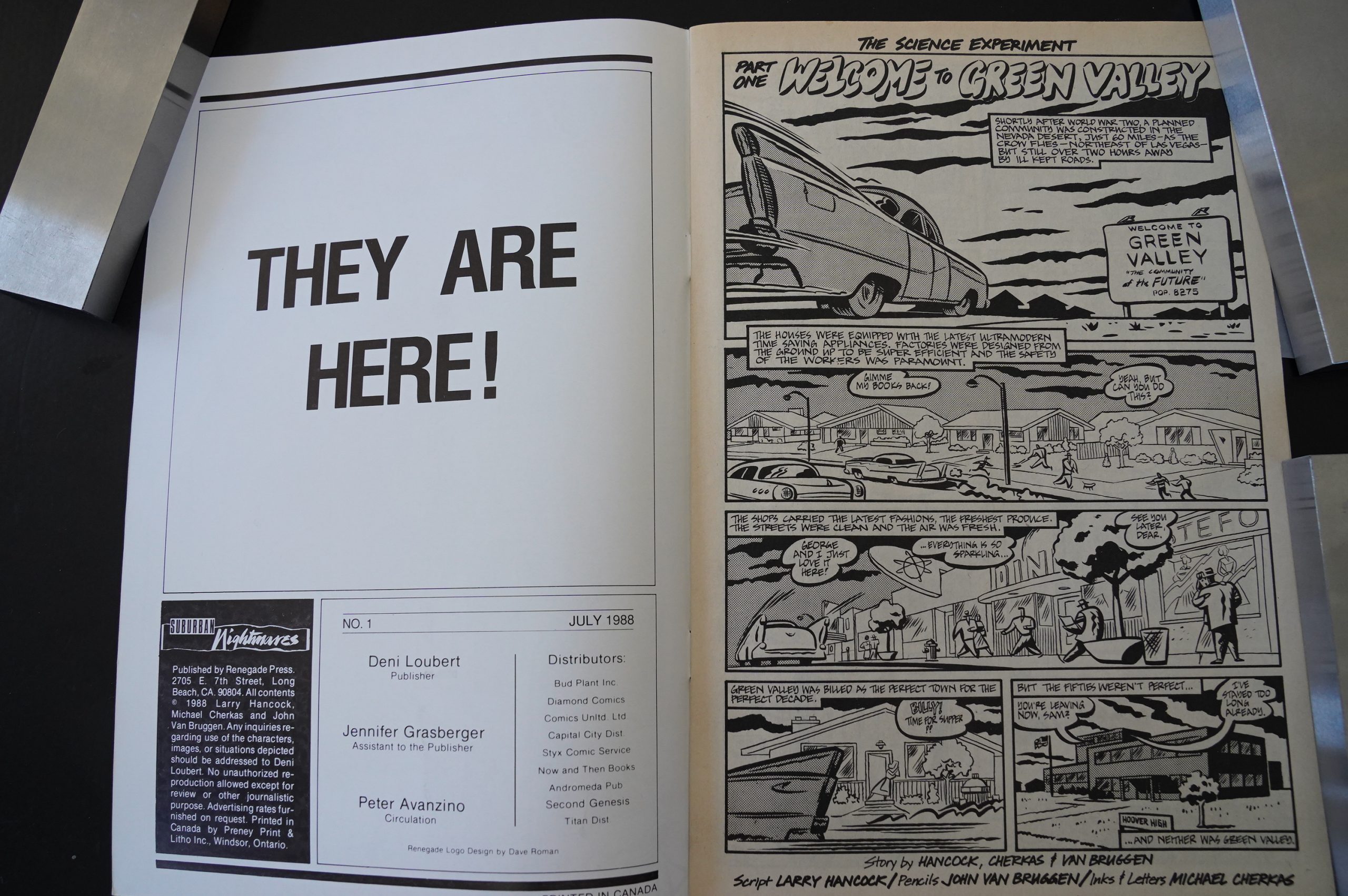 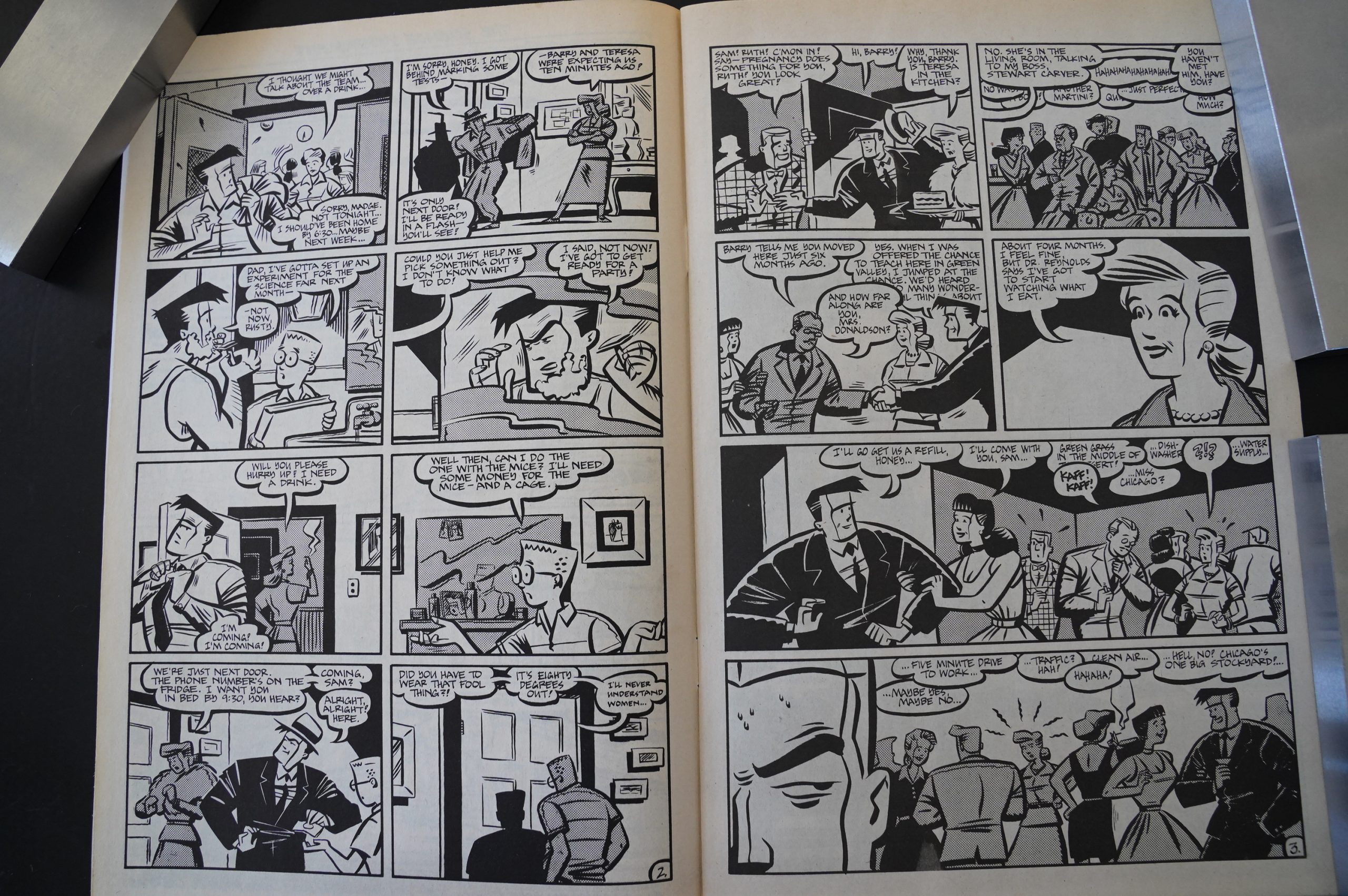 So, the pencilling here is by Van Bruggen, so they don’t look as kooky as when Cherkas does the pencilling on his own. It’s more of an Archie vibe… but with Cherkas’ distinctive neo ligne claire rendering. Looks good!

And as you can see, it’s very dense. There’s a lot going on on these pages — a number of characters and relationships either hinted at or stated. But there’s a reason for this super-compressed storytelling: Each issue has eight pages of this serial, and the rest of the pages are misc. short stories. So the main story only has 33 pages to happen… and the creators manage to do this in a way that feels very satisfying. 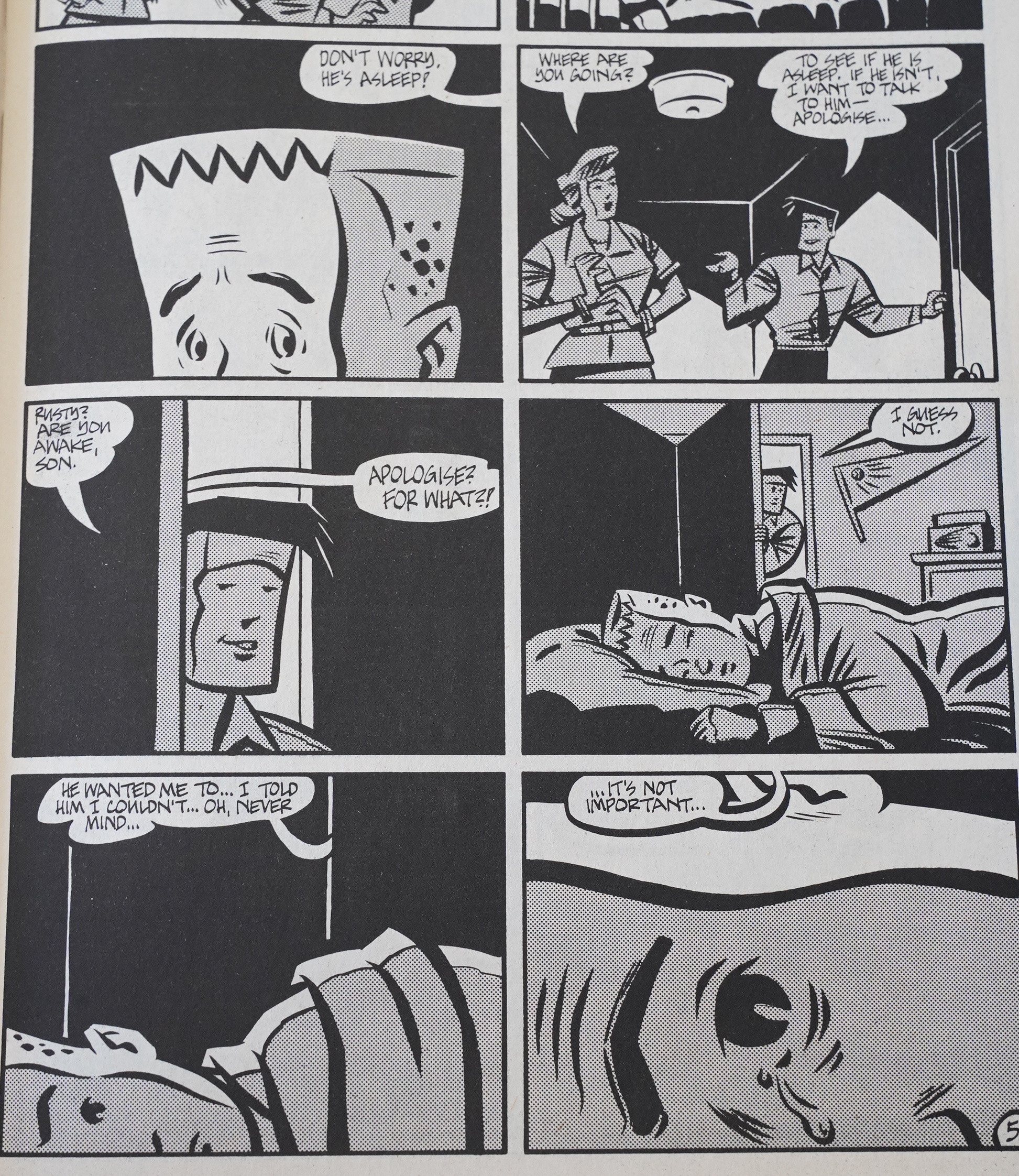 It’s not all people standing around talking, either.

And, yes, since this is Hancock & Cherkas, there’s nuclear explosions, government plots, conspiracies, secrets and all that good stuff. 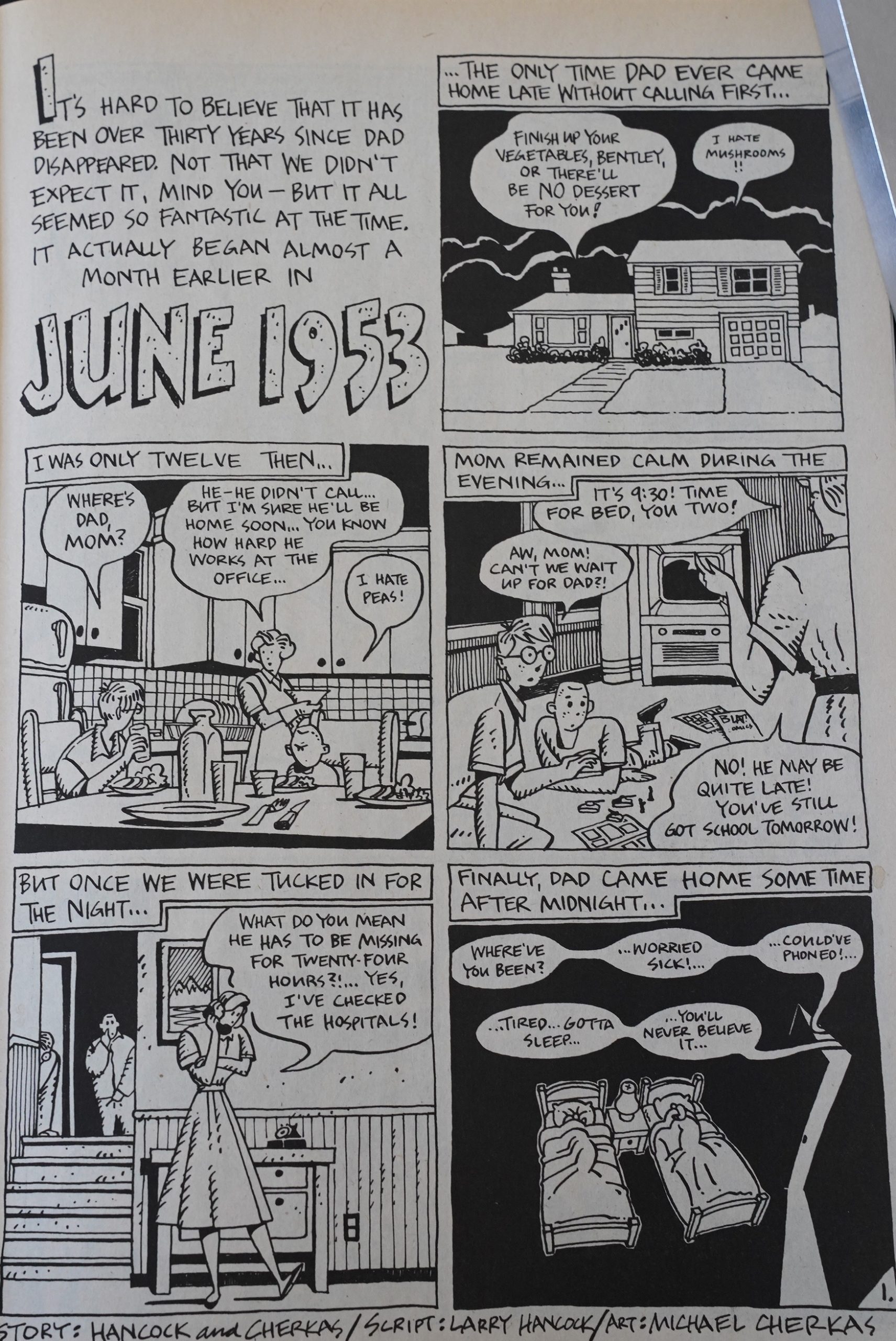 All the back-up stories also deal with subject matter adjacent to the main story, but are all done in different styles. It’s fun. 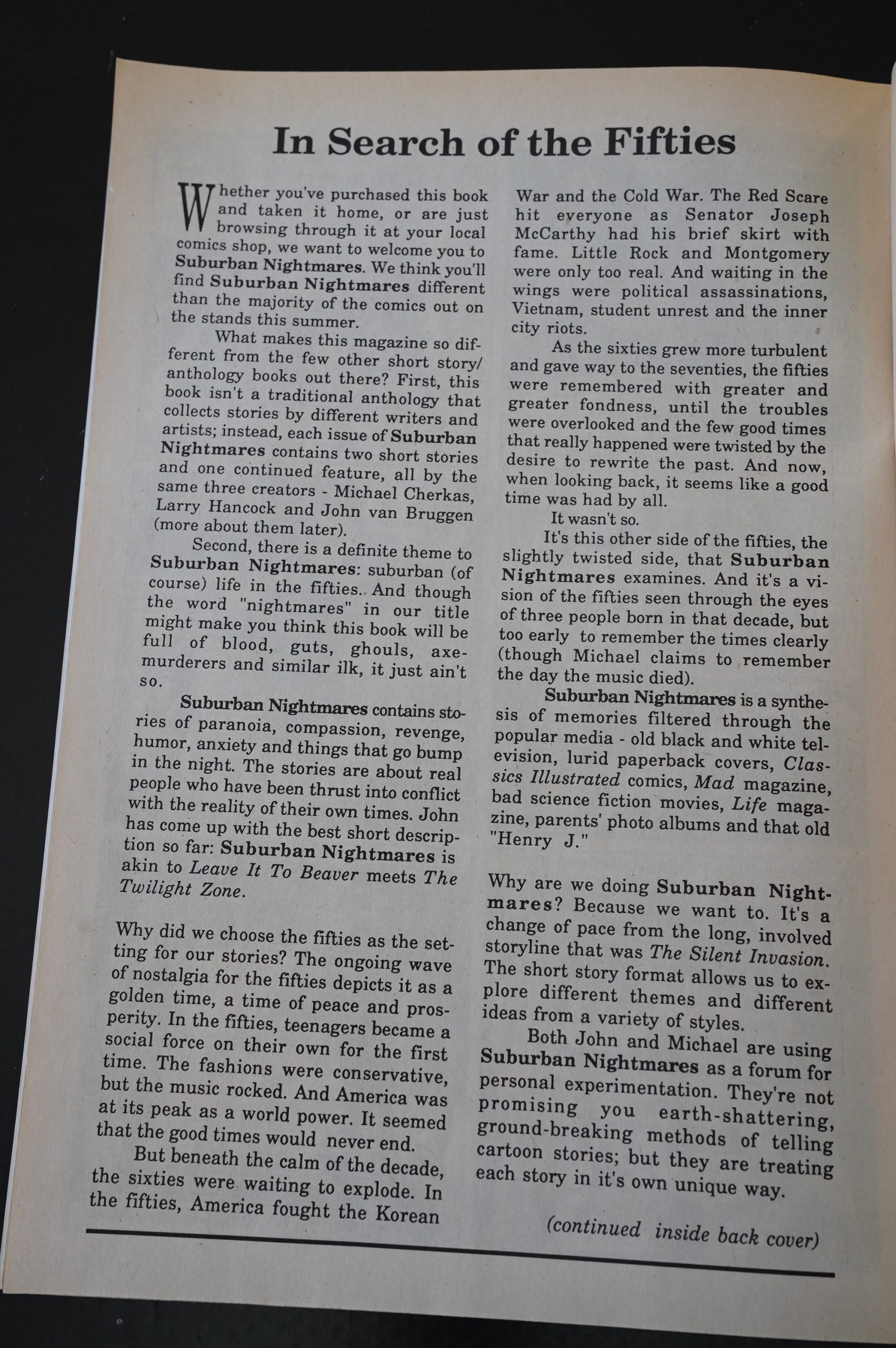 Hancock writes about the rationale behind the series.

The third and final third of each issue is a reprint — of a story that appeared in The Silent Invasion. Since you have to assume that most people reading this has already read that series, that does feel like a cop-out: It’s just 16 new pages per issue.

But if you haven’t read these stories, they’re still pretty good. Not as strong as the new material, though. 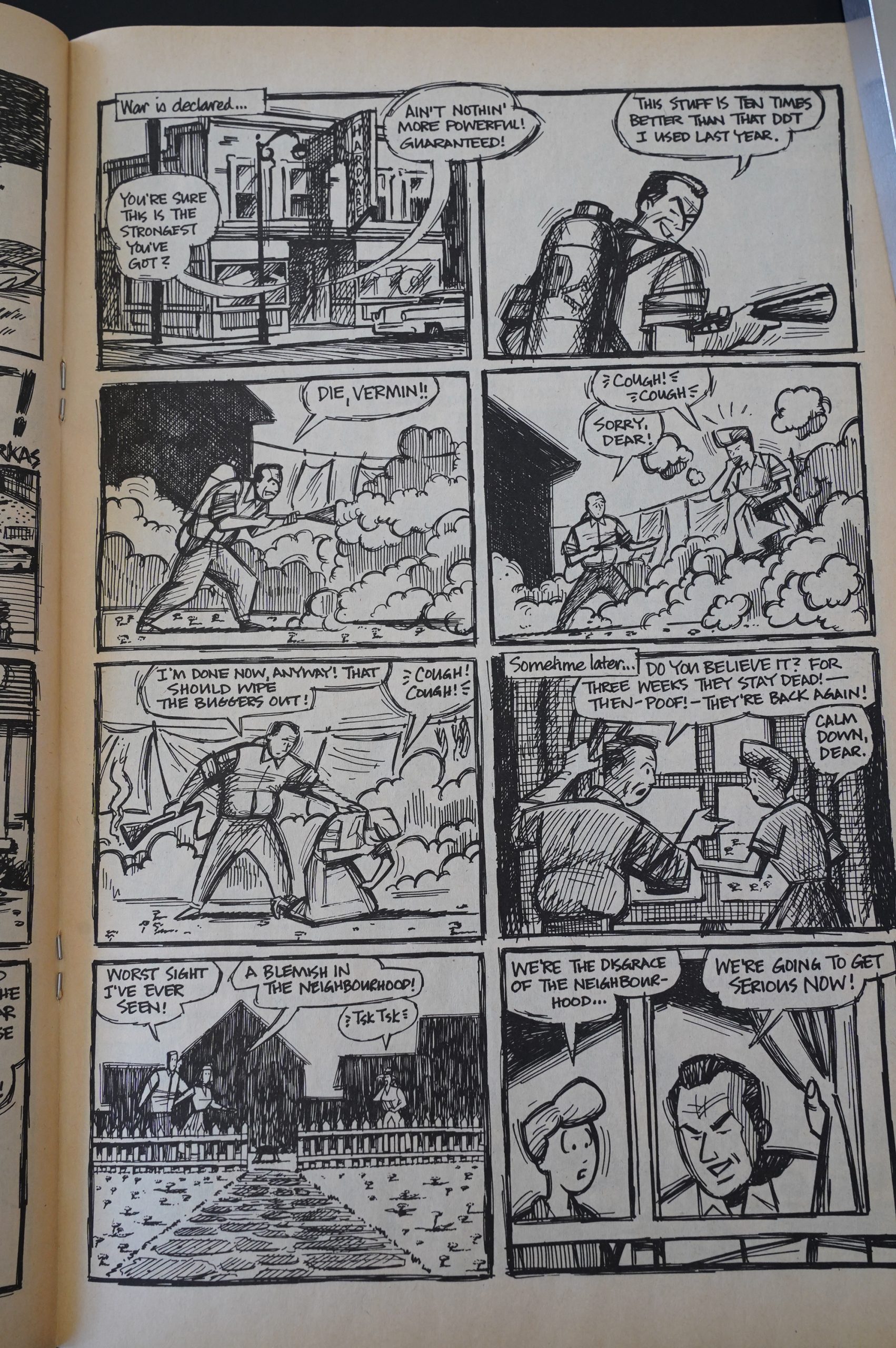 This new story, about horrible, horrible dandelions, is very amusing, for instance.

The main serial is very satisfying — the conspiracies are resolved in a non-groan-inducing way, which is often difficult. I’ve only got one criticism, really — it’s these bits with the son. You see, he’s doing an experiment with a mouse for his school project, and it then dies. This is meant, of course, to be a mirror of the main plot, where the gummint is experimenting on the people of the city here… but it’s a bit too on the nose, innit?

The final back-up story, about a guy who has his entire life shift because he misses a train, is probably the best of them all.

So: This is a pretty spiffy mini-series. 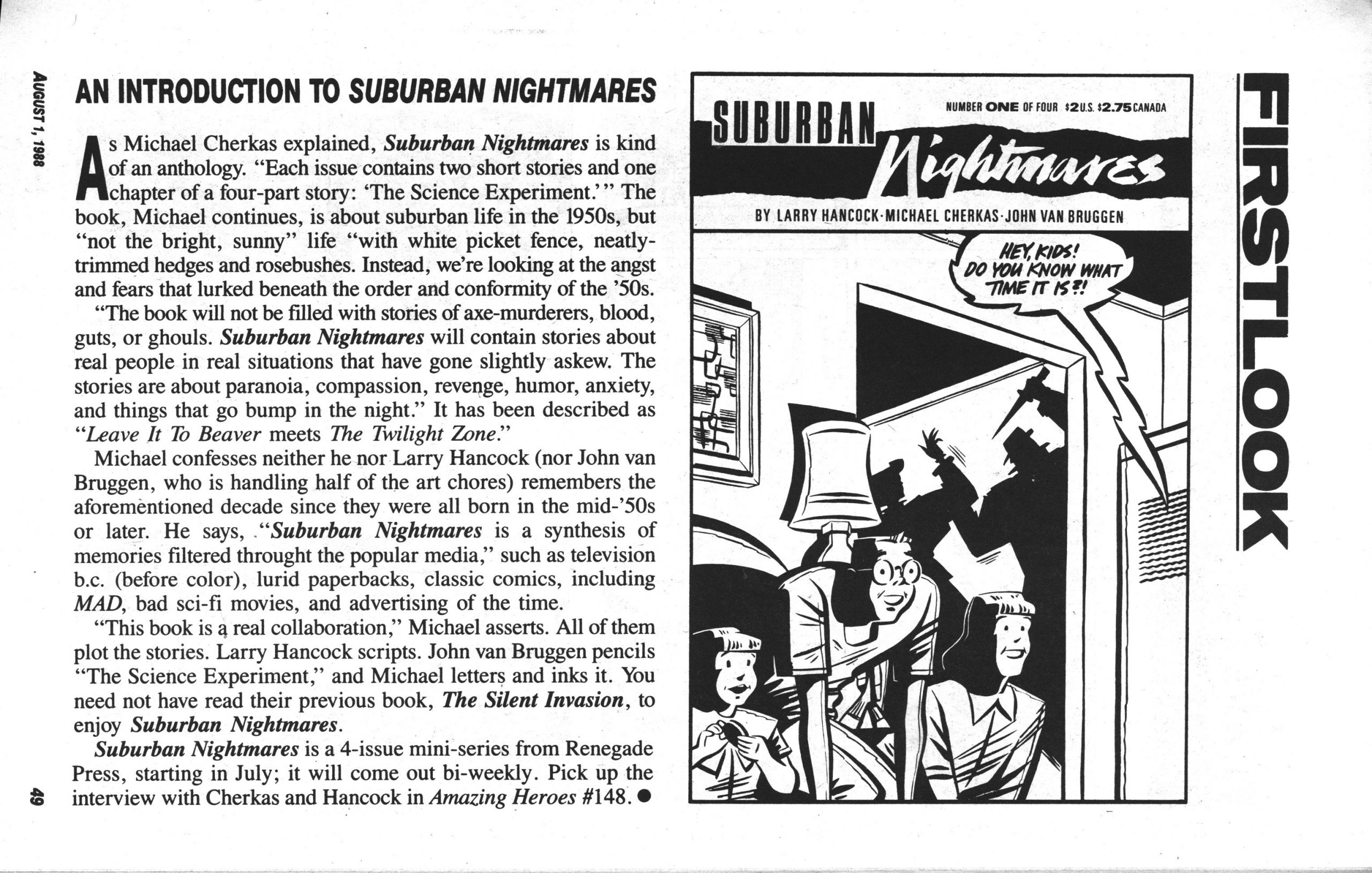 Amazing Heroes ran a preview of the series.

This four-issue anthology series is the
new-—and even better—work from the
creators of the excellent The Silent
Invasion.

Excellent as it was, the huge cast
and complex plot occassionally caus-
ed The Silent Invasion to sag under
its own weight, obscuring the work’s
deeper levels. Suburban Nightmares ‘
short story format is much more
effective.
What the creators are doing, essen-
tially, is creating a fictional ’50s, very
close to our historical ’50s, but blend-
ing that era, with its outward opti-
mism and prosperity concealing a vast
morass of fears (the atomic bomb,)
prejudices (against blacks and com-
munists), and imminent catastrophe
(Vietnam), with the ‘B-grade’ science
fiction movies that were practically
the only place we allowed those fears
to surface. What comes out is a vast
metaphor for the ’80s, where much
the same mask conceals much the
same fears, prejudices, and conflicts.
Some of the stories in Suburban
Nighmares are reprinted backups
from The Silent Invasion, others are
brand new. The longest story, “The
Science Experiment, ” will be anthol-
ogized throughout all four issues.
There’s not much to say about
“The Science Experiment” at this
point. The first episode, “Welcome
to Green Valley” sets up a number
of situations, resolves none of them,
and is, generally, evocative as hell.
The last page of this installment,
where an admiring crowd watches an
atomic test from a hospital window
in the background, while the plot
thickens in the foreground, is one of
the most subtly terrifying comics
pages I’ve ever seen.

I’ve saved the middle story for last,
because last is traditionally a position
of honor, and this story, “June,
1953” is, very simply, a masterpiece
of comic storytelling.

The ending to this story, in this
most bombastic and exaggerated of
media, is a masterful example of
restraint. Without giving it away, let
me just say that no answers are given
but innumerable fascinating questions
are raised.
Suburban Nightmares shares the
unique look of its predecessor—
simple characters, almost caricatures,
given depth and density by exagger-
atedly bold lines and lots of solid
blacks. Heavily influenced by Euro-
pean cartoonists, it’s a style perfectly
suited for human storytelling.
I •m guessing that Suburban
Nightmares is only four issues,
because Renegade wanted to test sales
before committing to a regular series.
If this is so, I hope people catch on
in time, because this is a comic that
deserves to go on for years.
Grade: Mint.

All: How did the idea for Suburban
Nightmares come about?
CHERKAS•. we were just looking for
a new book.
HANCOCK: Well, it came about in
two ways…
CHERKAS: Larry, Larry, Barry!
Hang on. Really, the whole thing was
that The Silent Invasion was ending
and I was interested in doing another
book. But I didn’t want the commit-
ment required of a whole book again.
But with John van Bruggen’s help, we
could split the art duties and John was
interested in working ion the book.
John had worked on “Suburban
Nightmares” when it was a back-up
in The Silent Invasion. So we agreed
we’d try a four-issue series.
AH: Okay, Larry. What about you?
HANCOCK: I was going to say that
the whole way that Suburban
Nightmares originated was back in
The Silent Invasion when Renegade
increased the price on its books…
CHERKAS: That’s the answer to a
different questione That’s why we
started it.
HANCOCK: Why we started it in the
first place..
CHERKAS: I explained why it
became a second book, now you can
explain why it began in The Silent
Invasion.
HANCOCK: Okay. It began when
Renegade put up the price on its com-
ics. When Deni put up the price, it
was only a small increase in the US. ,
but it went up from $2.00 to $2.75 in
Canada. That was a lot and we look-
ed at it and thought that we needed
to give our readers more for their
money. So at that time we decided to
go up to 32 pages: And rather than ex-
pand The Silent Invasion, which
would have taken up a lot of Michael’s
time…
CHERKAS: we said, well, here’s
something that we can work on with
John. Then we talked to him. I’d
worked with John before; he’d done
comics before.
HANCOCK: Michael came up with
the title, Suburban Nightmares, which
works great. We wanted to set it in the
1950s, to keep with the mode of the
main feature itself. And again, it’s sort
of a “Twilight Zone” type of thing.
Actually, the best description of
“Suburban Nightmares” was the one
John van Bruggen came up with:
“Leave It To Beaver” meets the
“Twilight Zone.”
But the back-up feature lasted only
a few issues. We had done more than
enough story ideas, but when the sales
started slumping, Michael couldn t
really afford to continue doing all
those pages even with John’s help, and
especially since John’s pay came out
of Michael’s money. So we had to
drop “Suburban Nightmares” for the
last three issues of The Silent Invusion.
We had all these ideas percolating
around and we thought it was natural
to go on and look at doing another
book. And really, we wanted a break,
a change of pace. We find that it’s
totally different working on the short
stories than working on the one long
episode. We liked doing The Silent In-
vasion, but these short stories are a
totally different way of telling stories.
I find it much more challenging to try
to put something in seven or eight
pages than to try to stretch it out. Now,
there’s not a hell of a lot of character
development—there’s some character
development, but it’s got to be much
more abrupt. It’s got to be much more
brisk then when you just’ develop
somebody over all the issues we did
with The Silent Invasion. This is a
definite challenge to come up with a
complete, concise story that’s en-
joyable in those seven or eight pages.
CHERKAS: And John and 1 are go-
ing crazy because we decided to treat
each story in a different visual man-
ner. Both of us are feeling really
schizophrenic and we keep wonder-
ing who we are. [Laughter] We’re not
the same people now as we were the
day before, but it’s worth the headache
in the end. 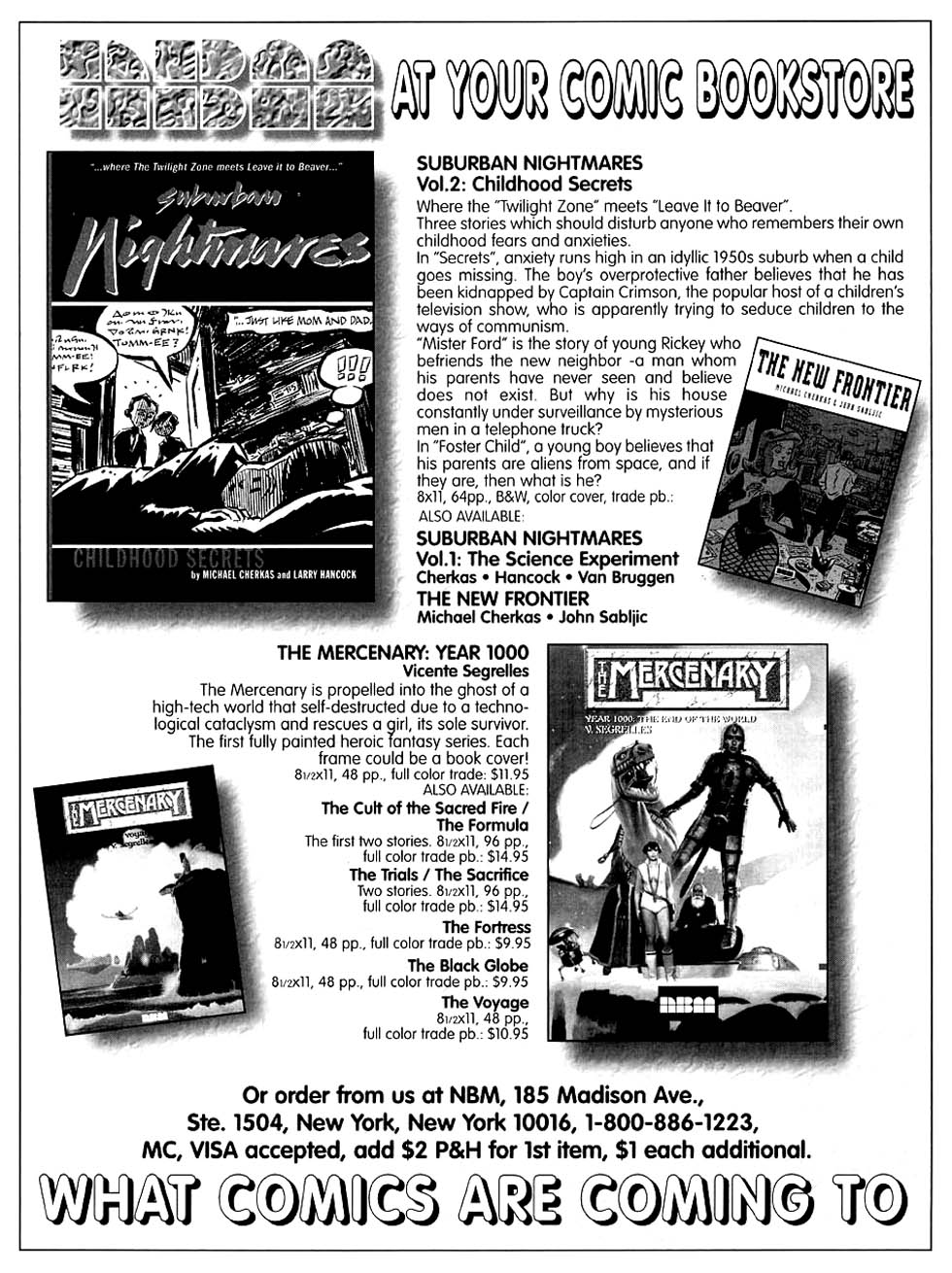 NBM reprinted all the Suburban Nightmare stuff in two volumes.

There are some reviews on the webses:

The use of damaged and discredited characters adds to the mystery elements, and it builds to a dark finale and a grim twist. All in all very satisfying.