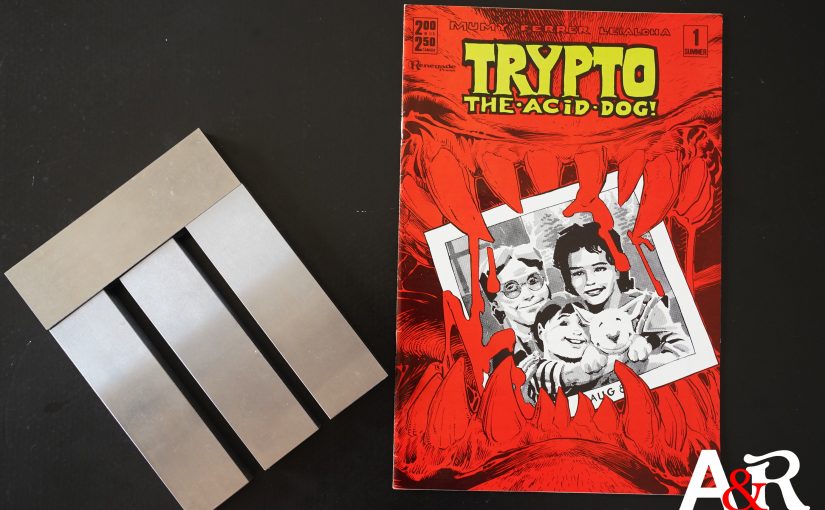 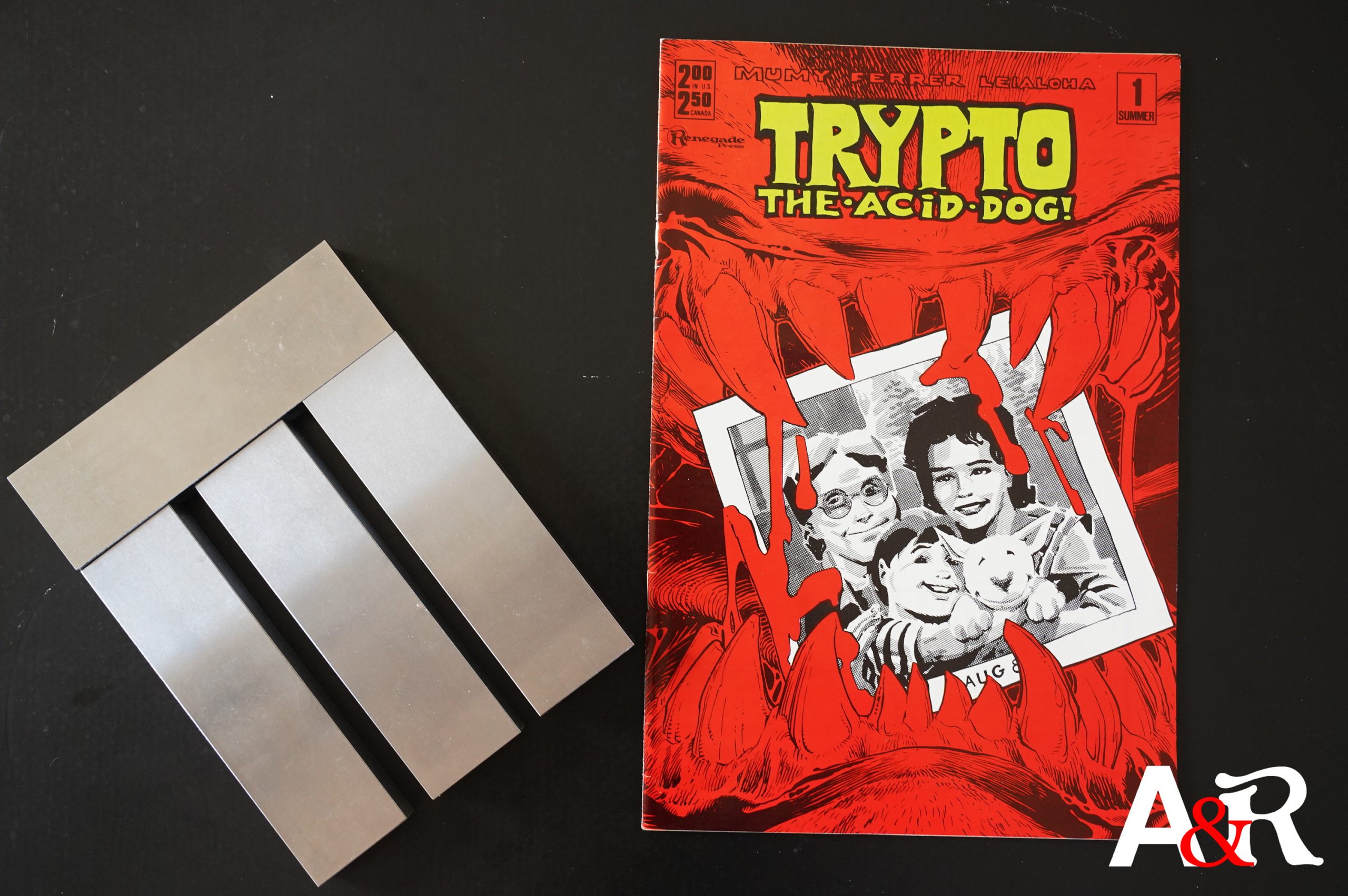 Max Allan Collins (of Ms. Tree fame) writes the introduction here — which is very usual for Renegade. The vast majority of the books have little or no contextualisation… which I kinda like. So let’s skip the introduction and just start reading: 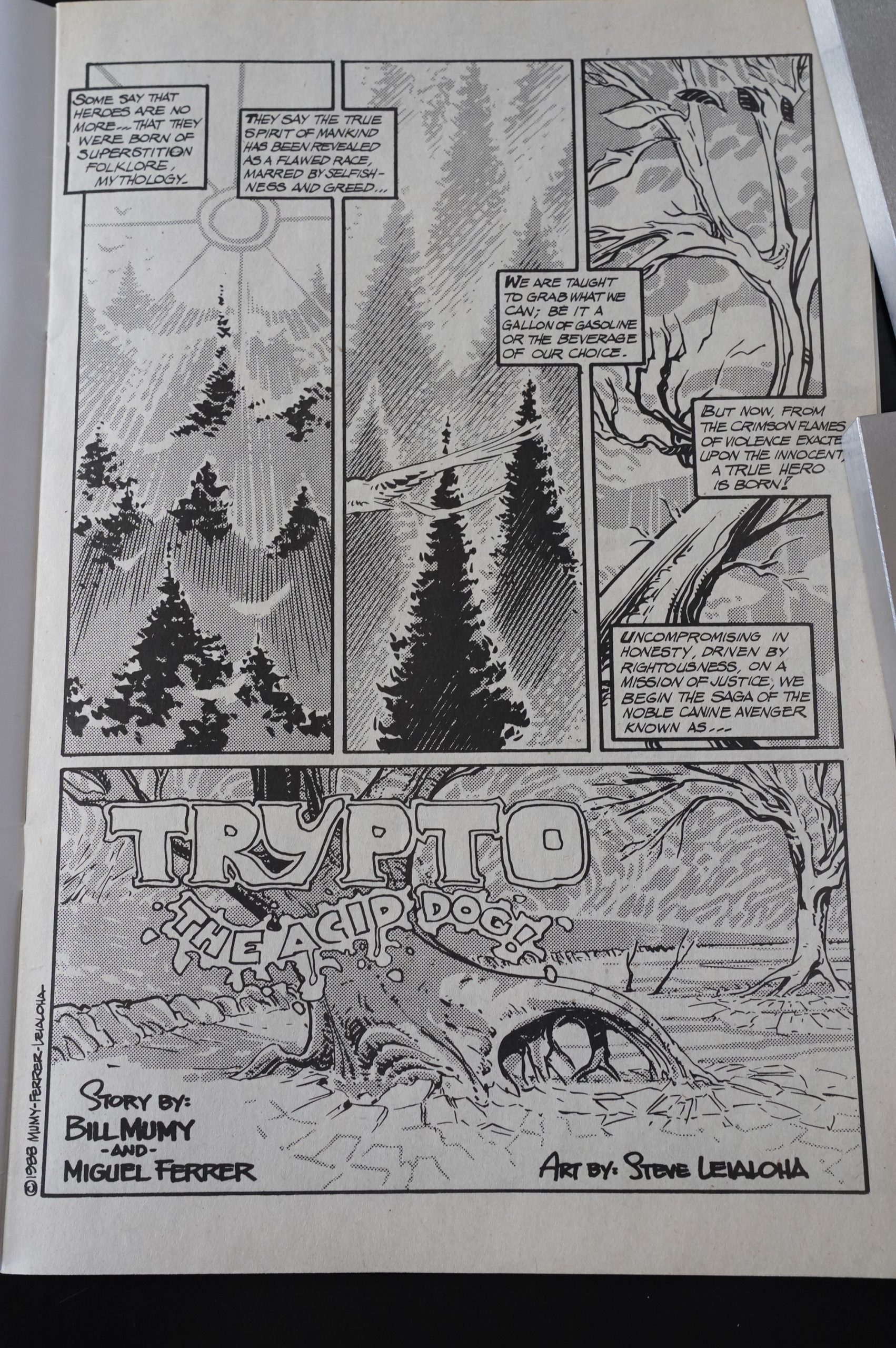 Oh! So this is about environmental stuff, and not about a dog that drops a lot of LSD? I guess the name is both a pun on “Krypto” (Superman’s dog) and on “trip”… 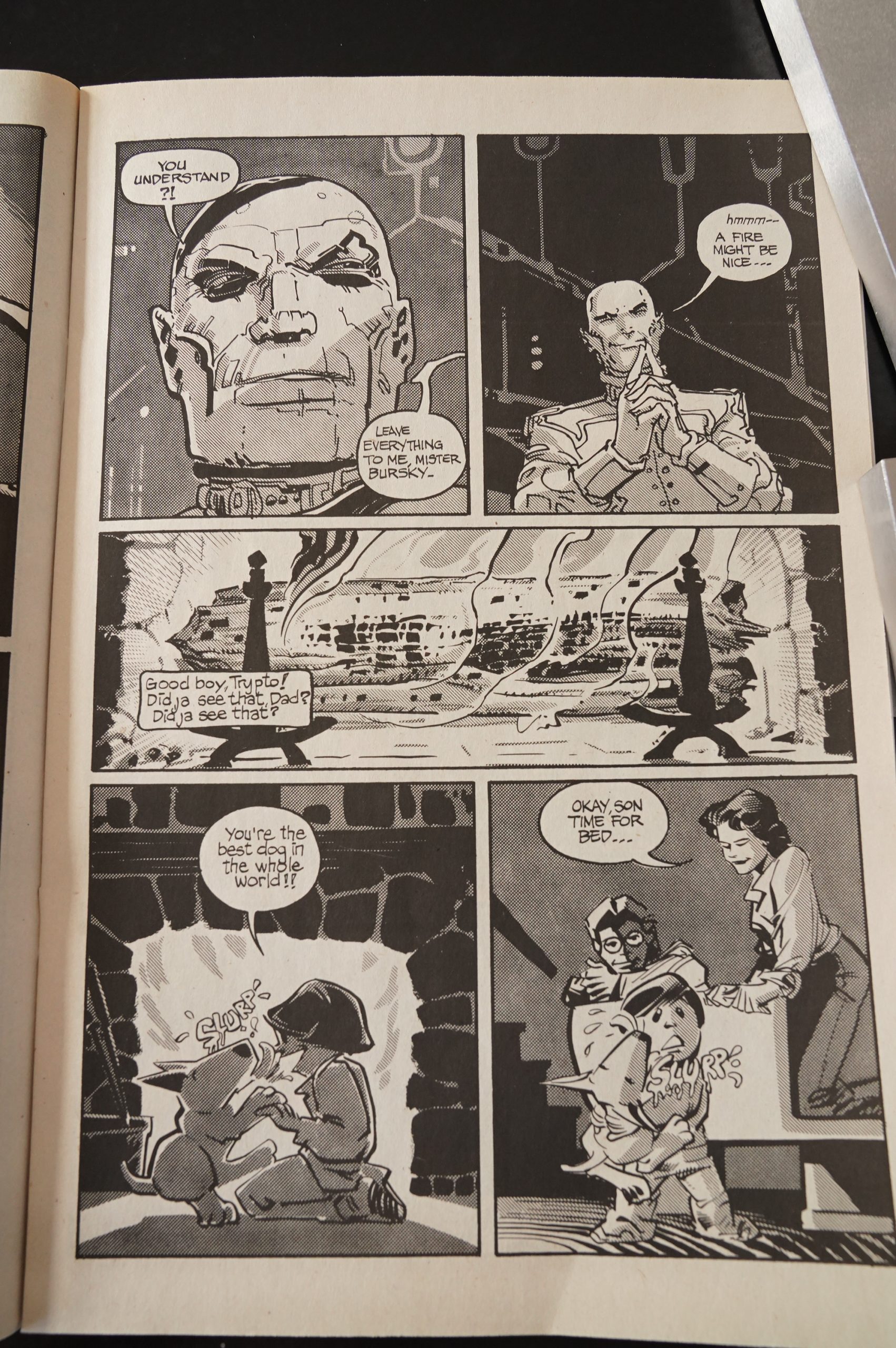 Leialoha’s artwork is lovely, and in his super-toned mode: That is, lots of zip-a-tone in different weights. The cartooning level seems to be different for all the characters, though: The dog and the kid are super-cartoony, while the evil guy looks like something out of a Marvel comic. 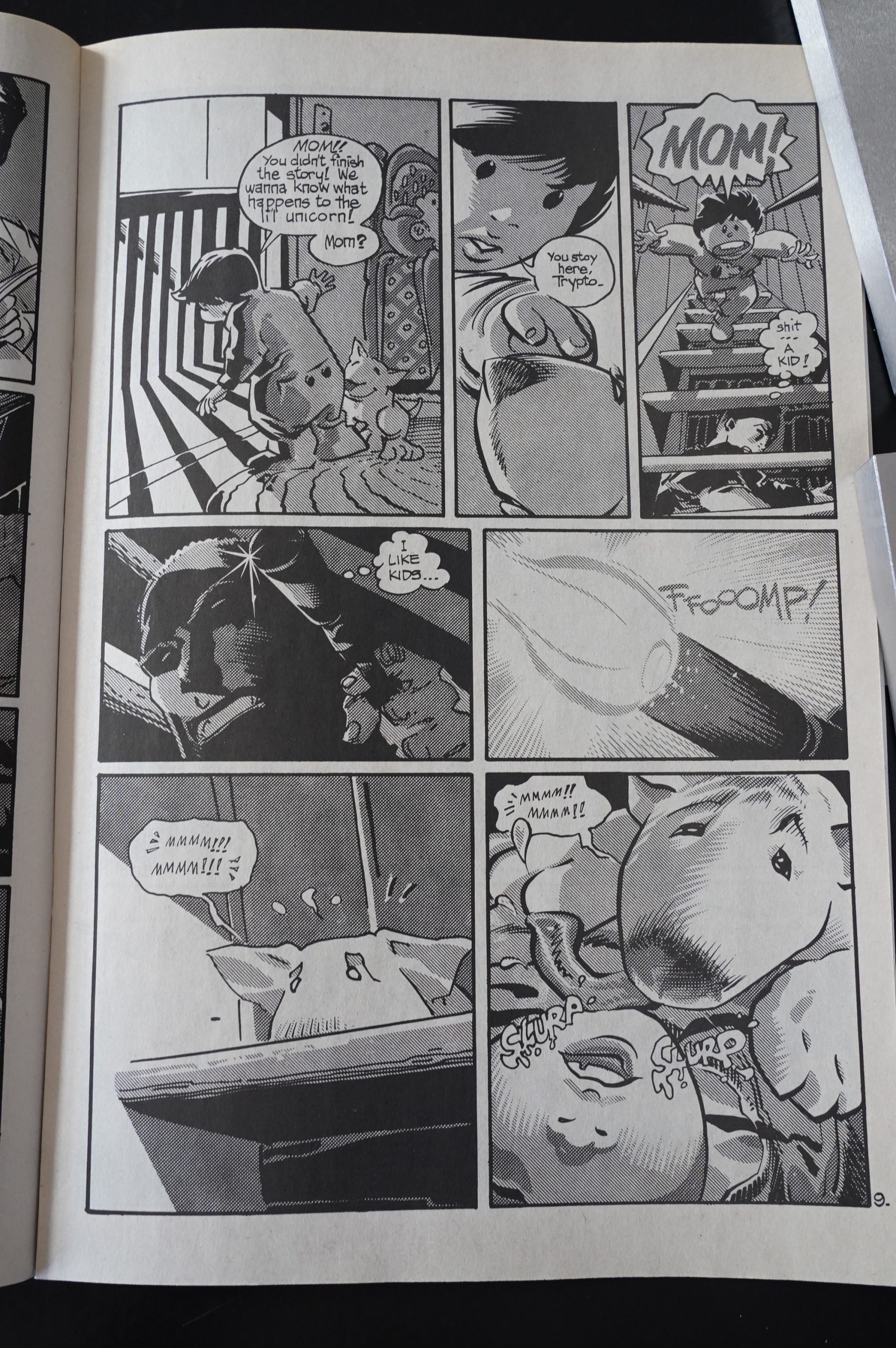 It’s a very brisk, almost abrupt read — we’ve barely been introduced to these environmentalists before they’re killed. Even their kid is murdered. It’s very… efficient? 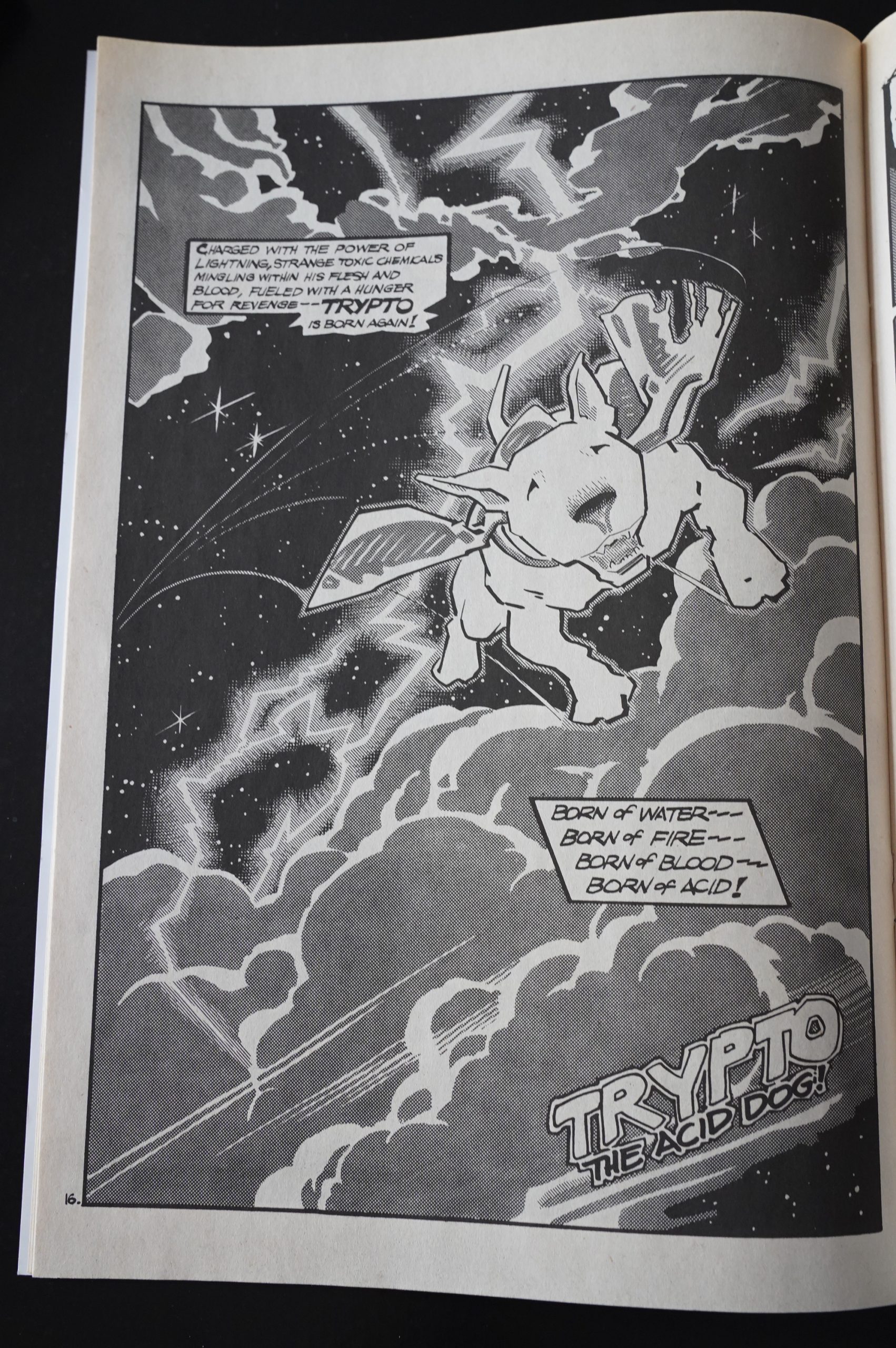 But this is an origin story, of course, so all of a sudden the dog is a super-hero dog… 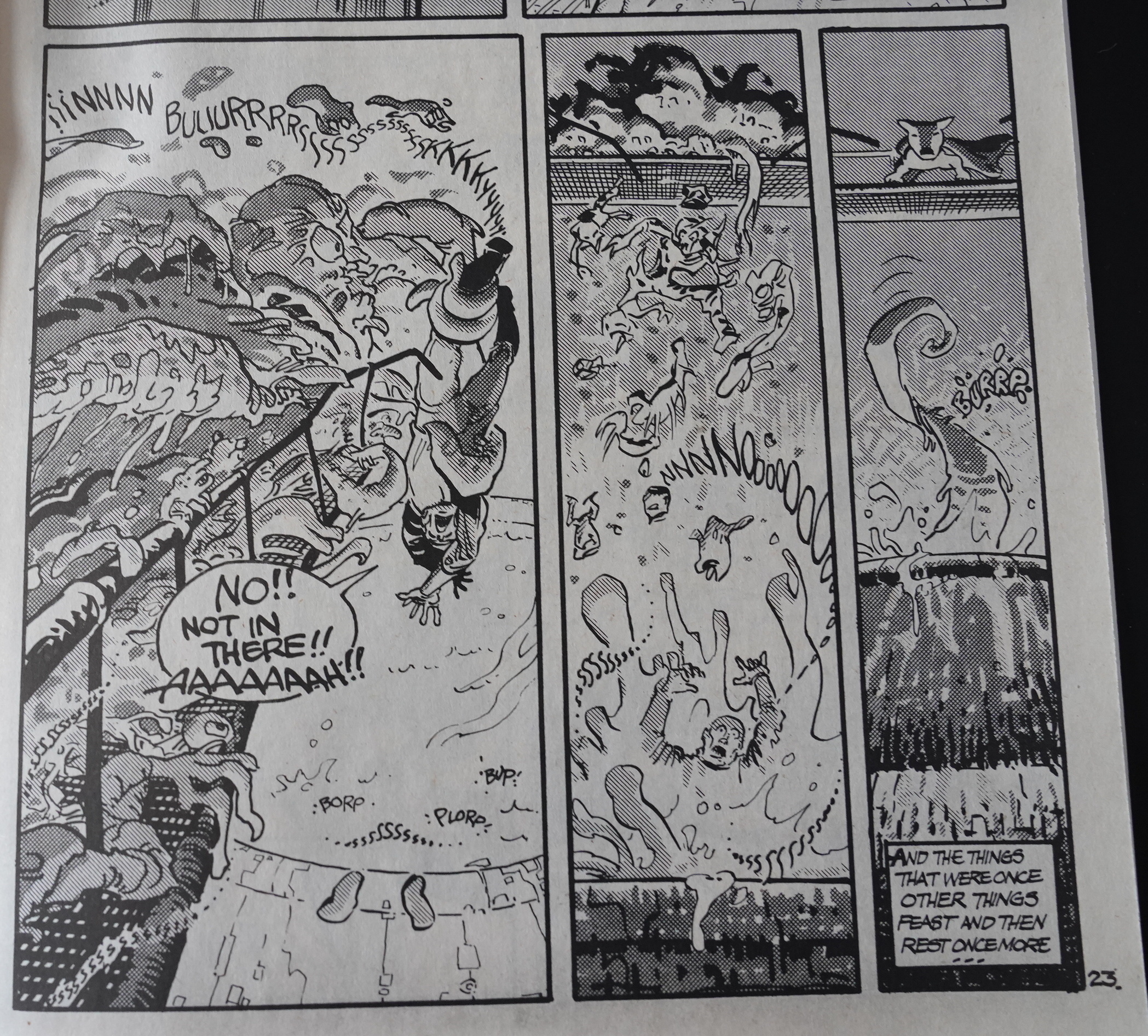 … and the evil guys are all killed.

It’s pretty good as first issues go. I wonder whether this was planned as a series?

OK, time to read the introduction: 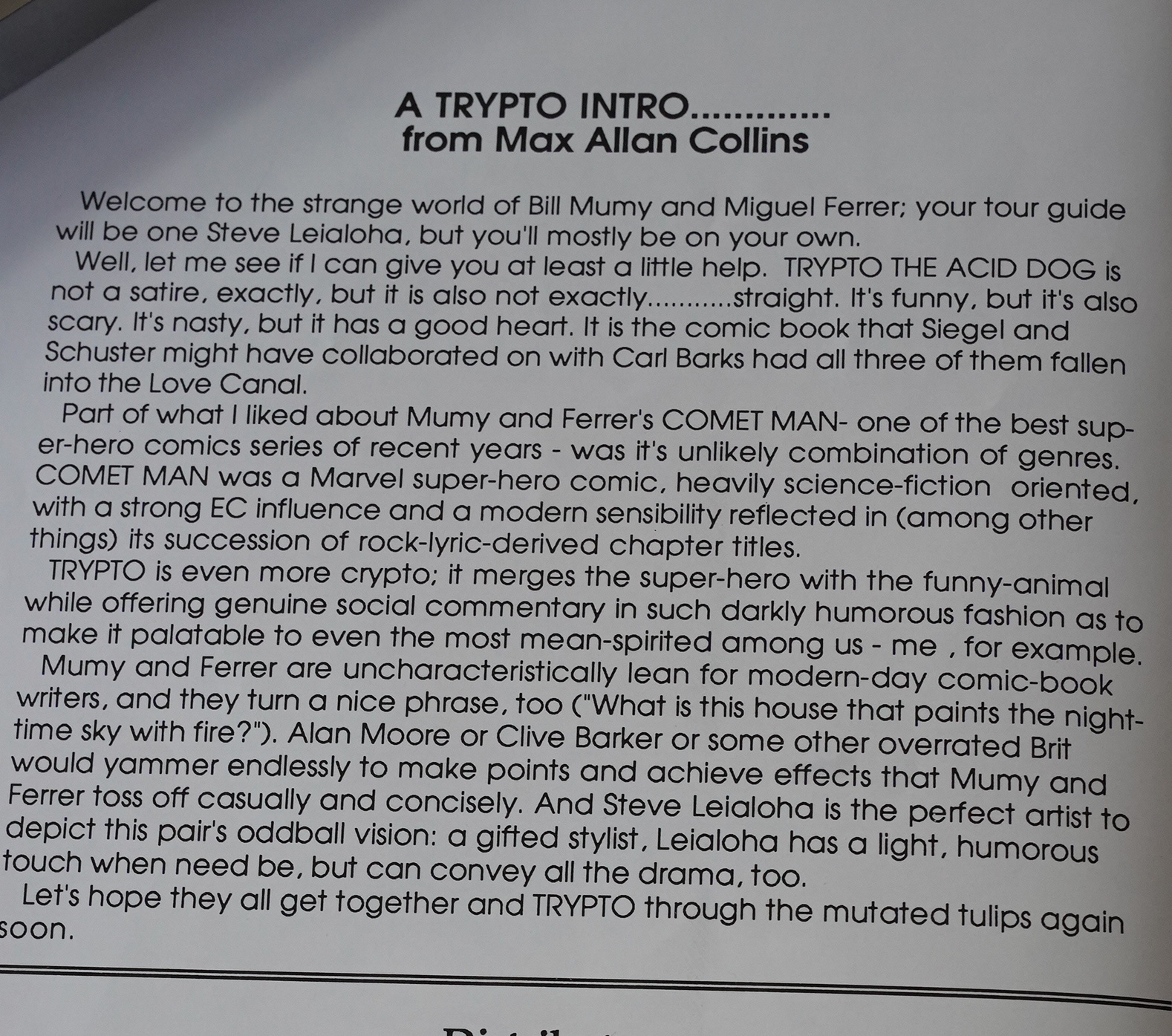 I’m not familiar with Comet Man at all. 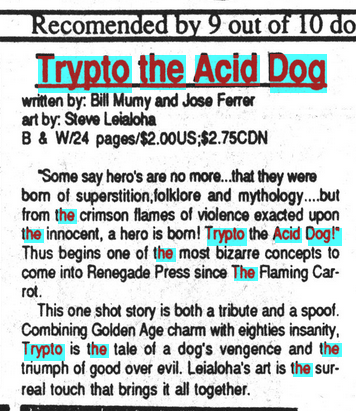 This is a self-contained story about a bull
terrier who finds himself with €uper-
powers. “The best way that I could
describe Trypto is that it’s basically a
really early Golden Age Spectre story,
starring a bull terrier instead of the
Spectre,” said Bill Mumy. Publisher
Deni Loubert sees it as a much more
tongue-in-cheek story which pokes
gentle fun at the Golden Age of comics.
The premise is that a family is assas-
sinated at the beginning of the story and
the bull terrier, in his dying attempt to
escape, tries to cross a river that’s
polluted with radioactive waste. He
drowns instead, but an electrical storm
has been brewing and a lightning bolt
suddenly strikes the river, and the
pathetic form of the lifeless dog,
transforming him into.. Trypto, the Acid
Dog! See justice meted out at the paws
of our hero! See the villains meet their
end at the jaws of our hero! It’s not just
another day in the life of a dog—he’s got
a bone to chew with the bad guys. It’s
his mi»ion from God.

Our dog, Trypto, is a whole other dog who
stars in his own book from Renegade Press. Writ-
ten by Bill Mumy and Miguel Ferrer and drawn
myself, Trypto is based on Miguel’s dog Davy,
an Engli’h Bull Terrier with jaws of iron. Good
boy.. 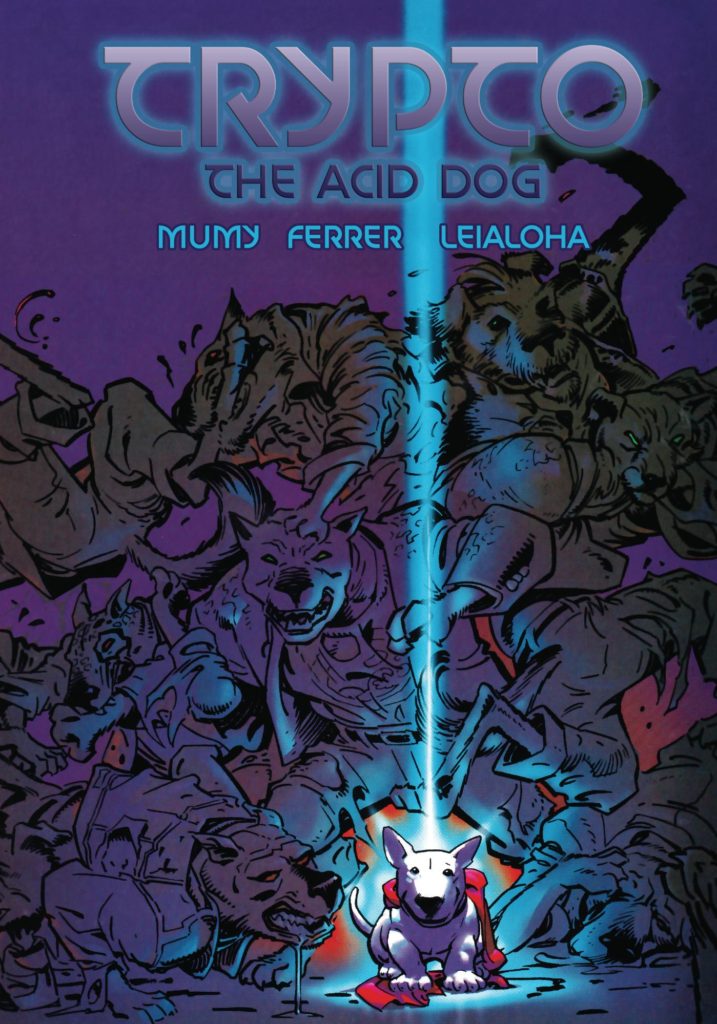 Here’s a review of the original book:

Leialoha’s art is a treat, with Trypto’s cone-shaped head particularly appealing. It’s a simple story with a few good gags but it takes its plot seriously – rather different than the all-out Rex the Wonder Dog as Captain America parody I complained about earlier, offering somewhat more subtle humour.

This is the only review of the collected book I could find:

I’m surprised that no one else has written a review of TRYPTO, the acid dog. It is very charming and exciting. Mumy & Ferrier have a nice quip for speech. Very natural and it was Cartoonist Steve Leialoha that drew me to buy the original comic books in the first place. He’s one of my favorites. The stories are good a dash of Tim Burton in it’s vibe. Well done and most entertaining to read.