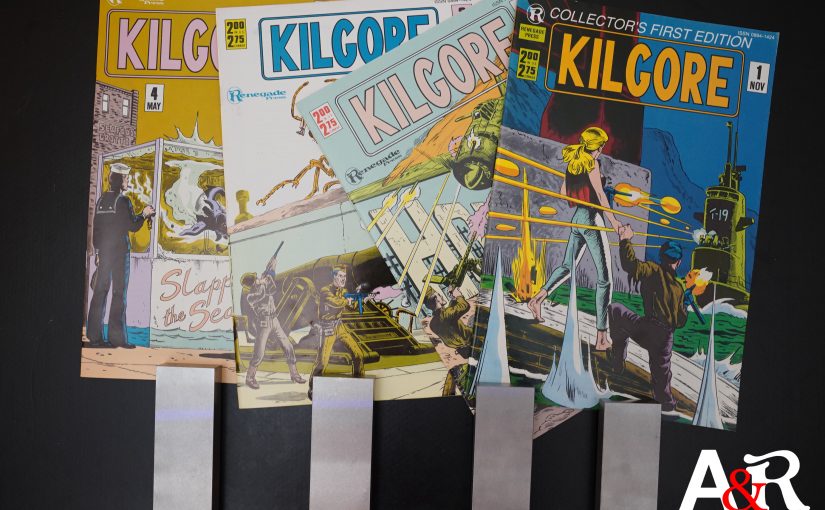 When I’m typing these blog posts (I wouldn’t call it “writing”), I generally do so after I’ve read the entire series I’m er typing about, but I do so as if I was typing in real time while reading? (Rare peek behind the scenes! Secrets revealed!) I don’t take notes while reading, but I add little post-it flags to the pages I want to talk about, and as my short-term memory is kinda good (my long-term memory basically doesn’t exist), I’m able to type up these little ditties.

I’m mentioning it here, because I was befuddled when reading the first couple of issues, and in retrospect some of the points I was going to bring up seem… kinda moronic? Because I didn’t get what the creators were going for, at all?

So let’s read the first three pages together: 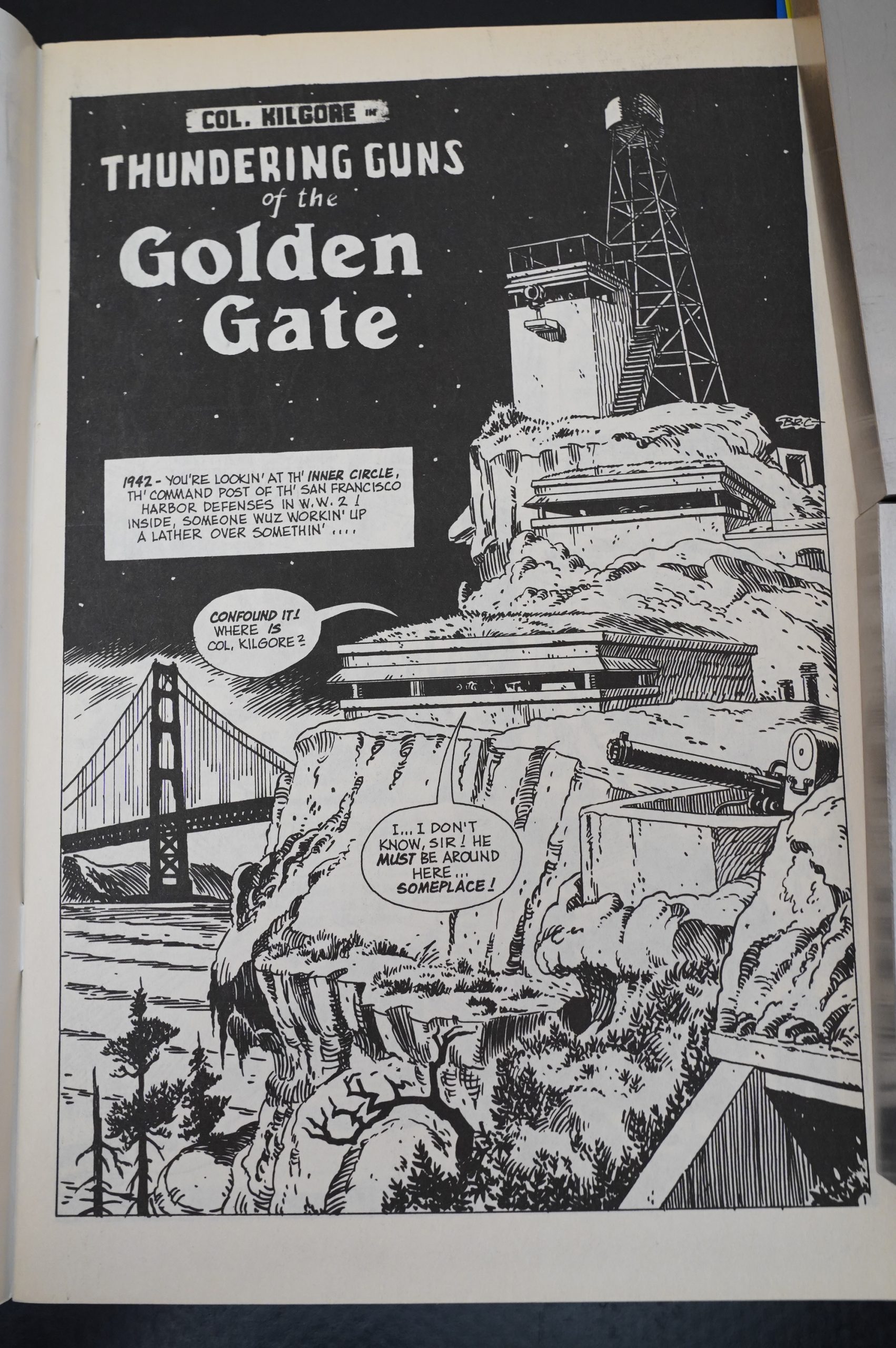 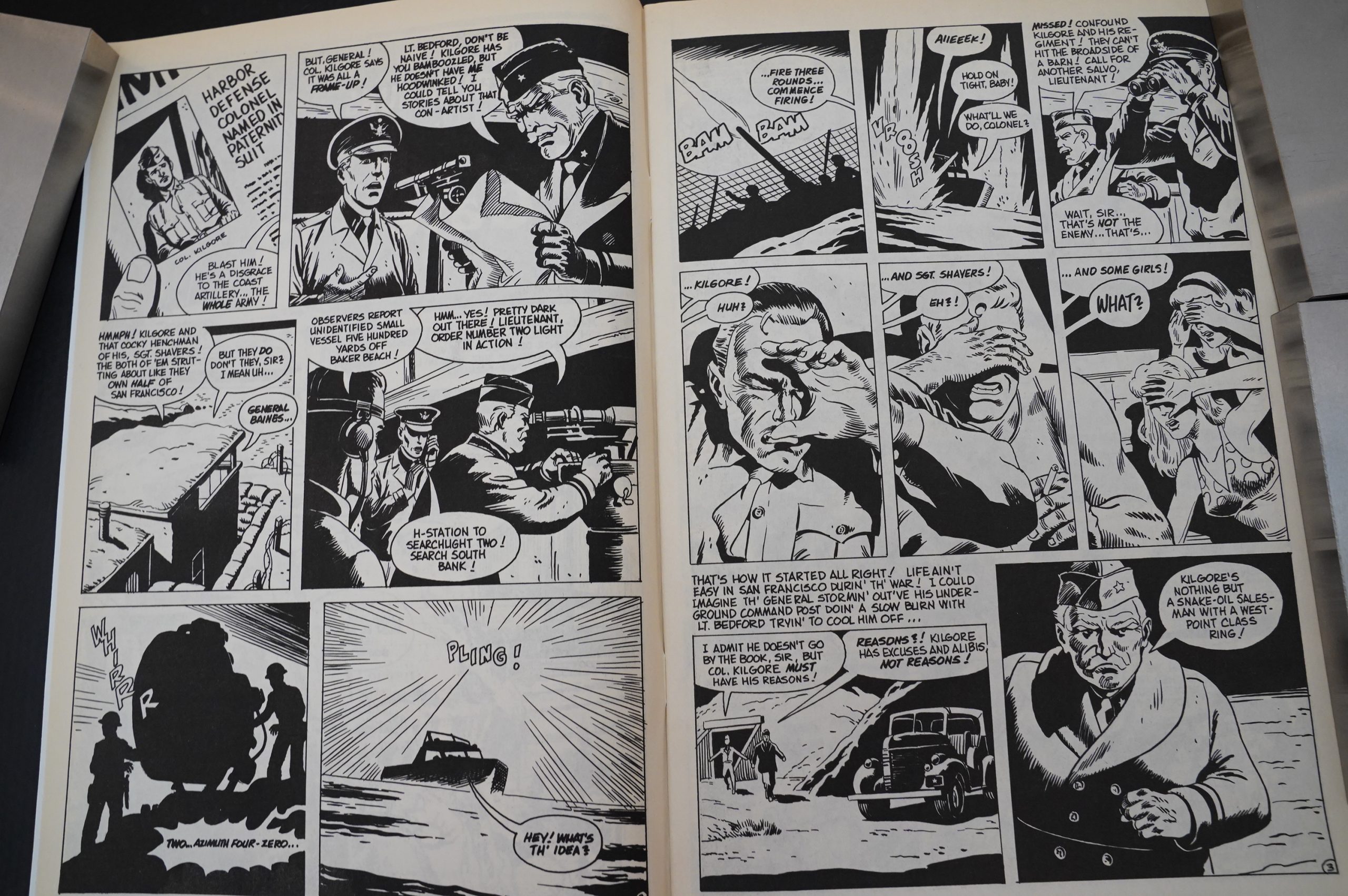 OK, so we have a pretty standard WWII setup, with an ornery general and an irreverent Colonel Kilgore (with sidekicks and dames). The artwork’s kinda attractive. It’s totally of its genre: This could have been from any WWII comic from 1951 to 1987, and from either the US or Europe. (This sort of stuff was being churned out by the metric ton in Italy, for instance.) 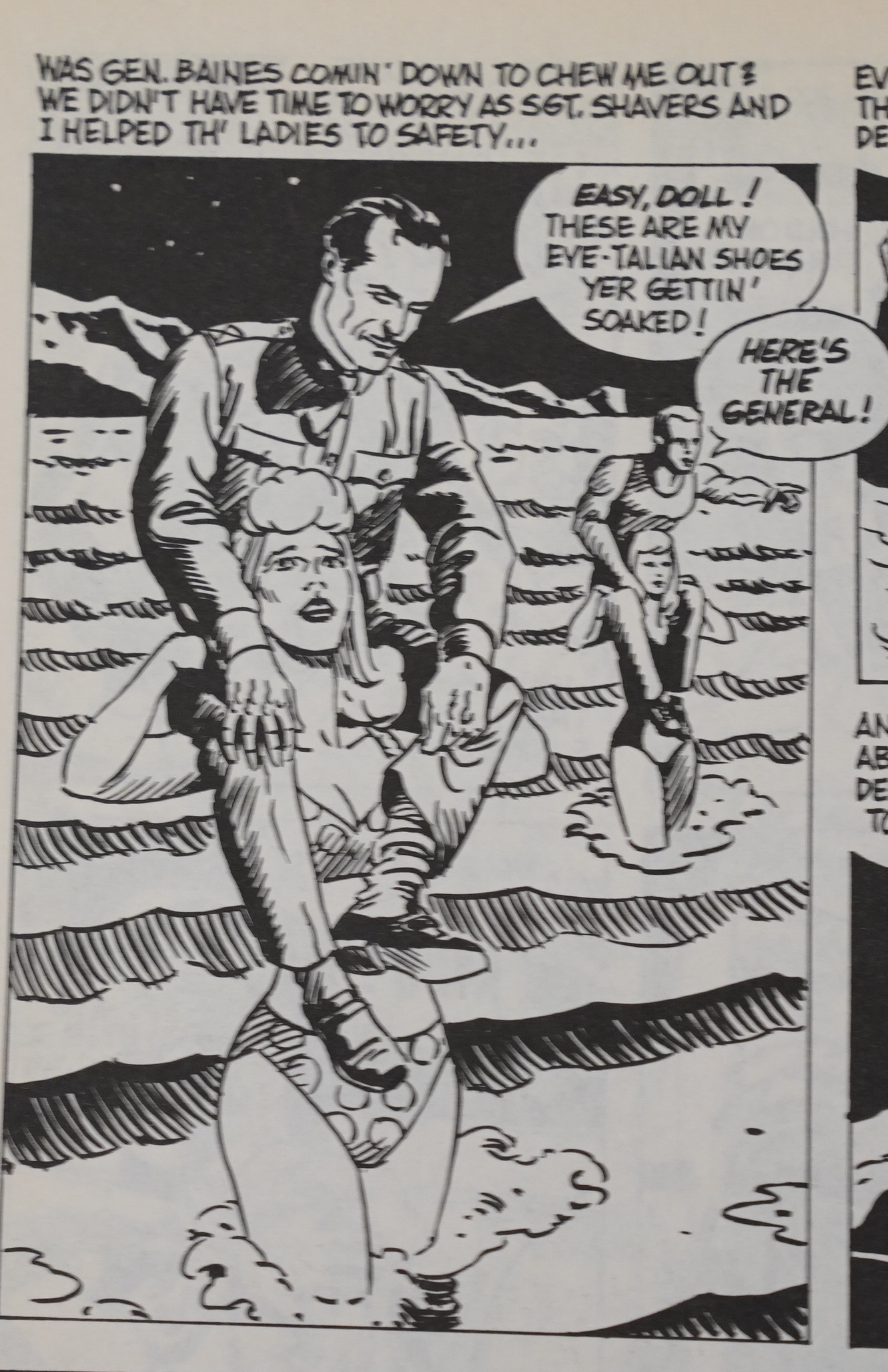 Oh, er… So Kilgore is kinda more of a rake? And he’s very very small? Or those women are reall really big? Hm. 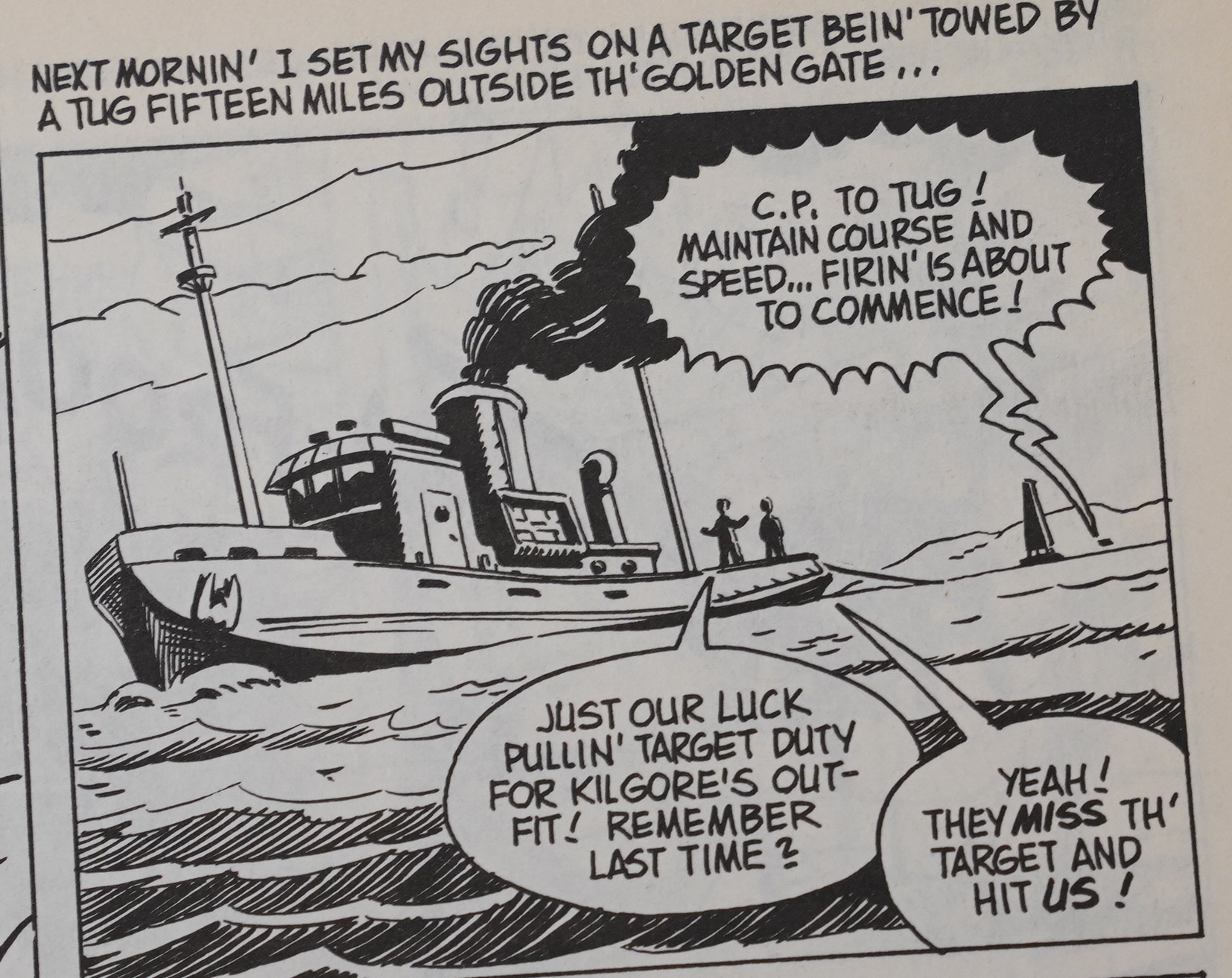 Shouldn’t they move the tug boat further away if they hit it last time? 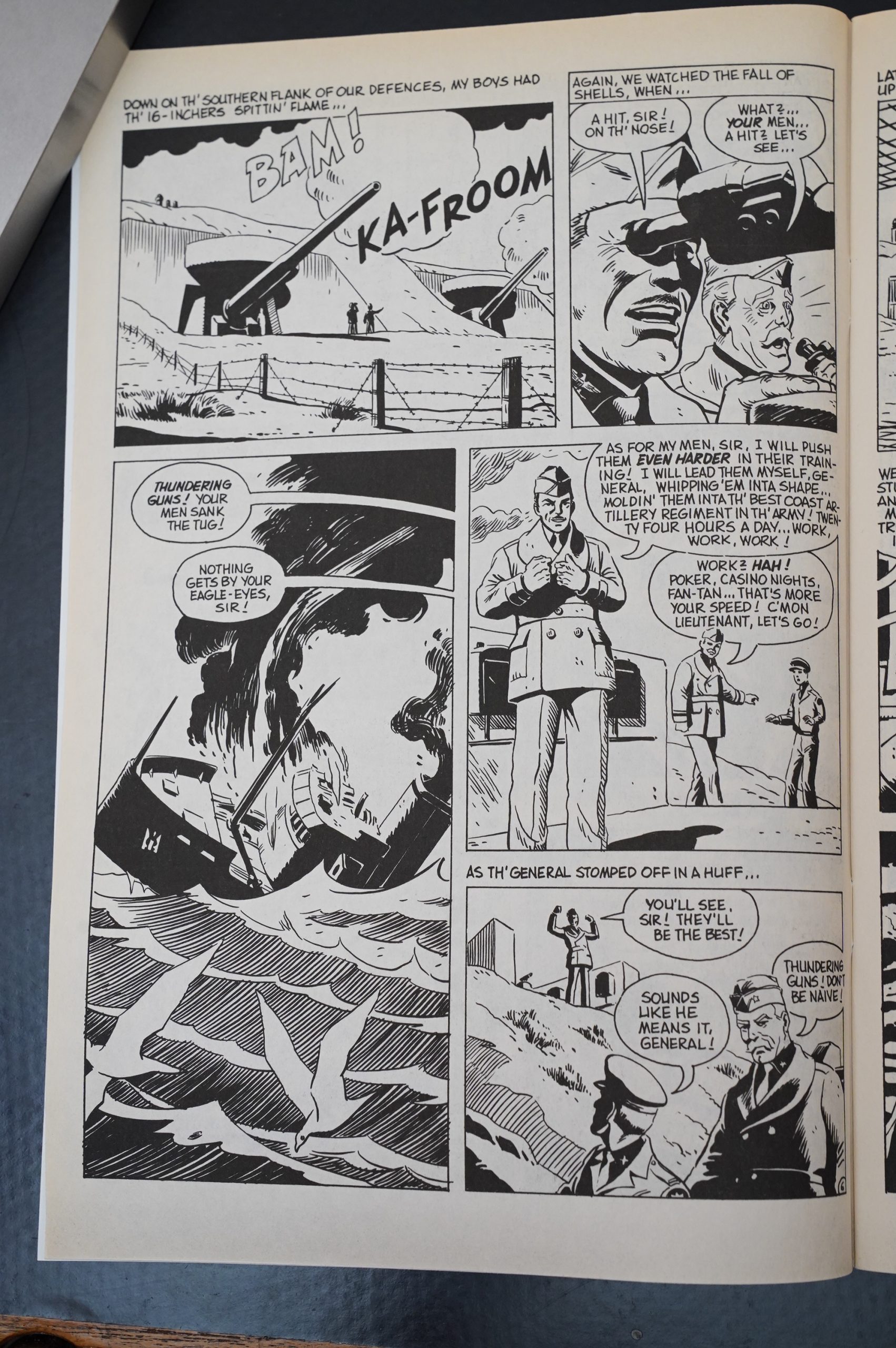 And then… they hit the tug boat again? Presumably killing those people aboard? And the general just shrugs off Kilgore’s actions here and is just… “whatever”? 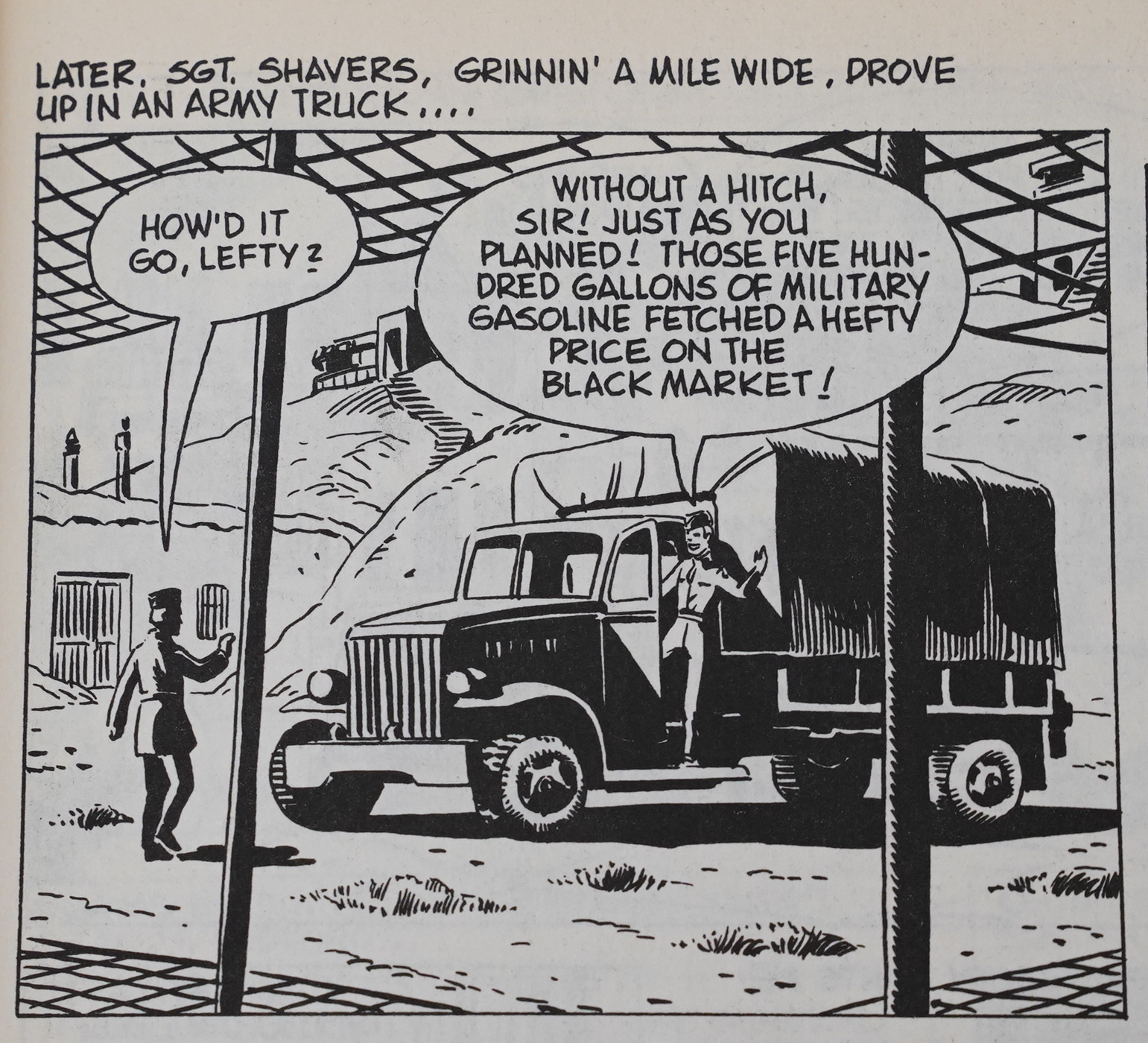 And Kilgore is robbing the military? (But remember than panel for later.) 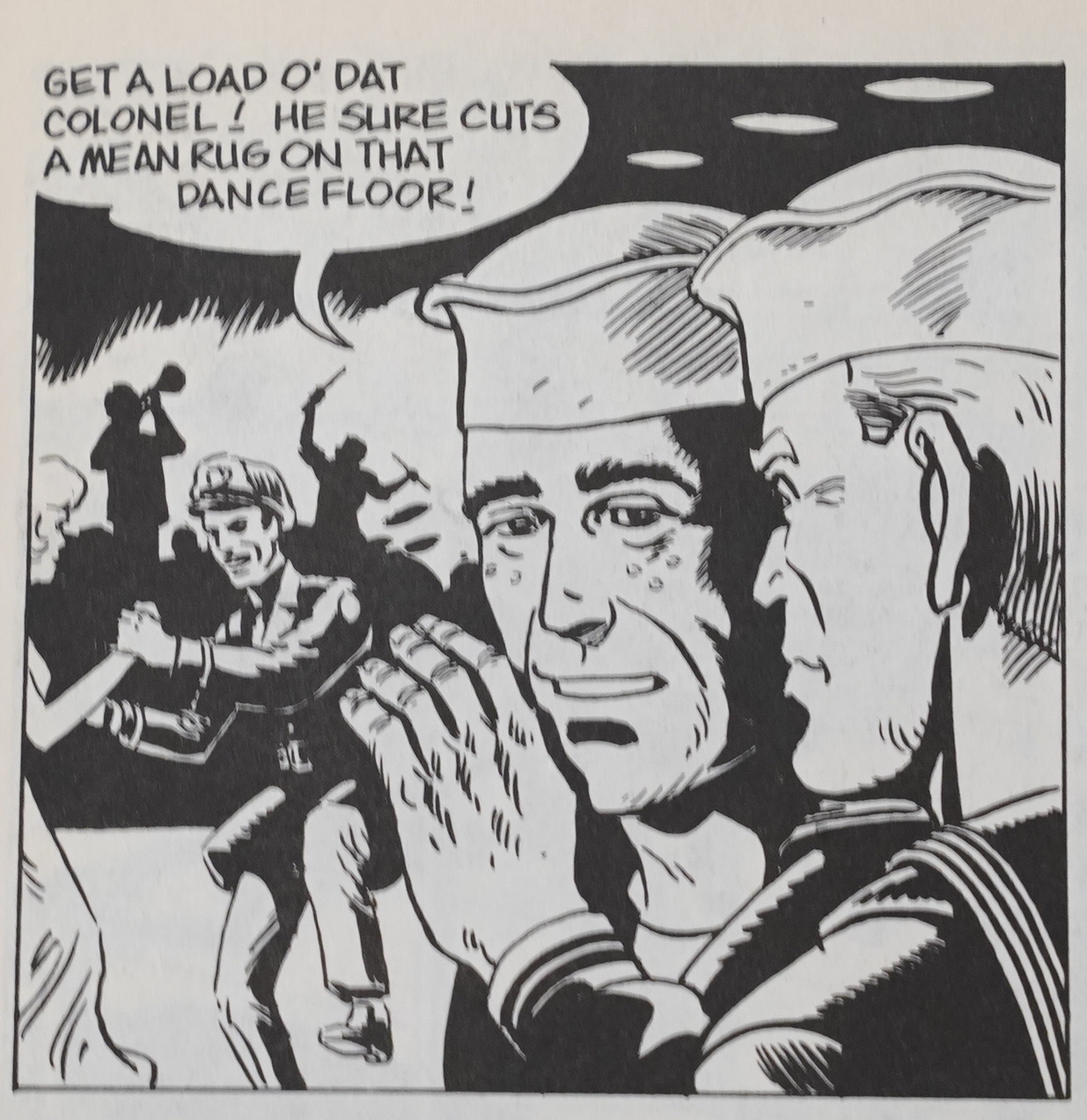 That’s some good dancing! OK, is this supposed to be funny? 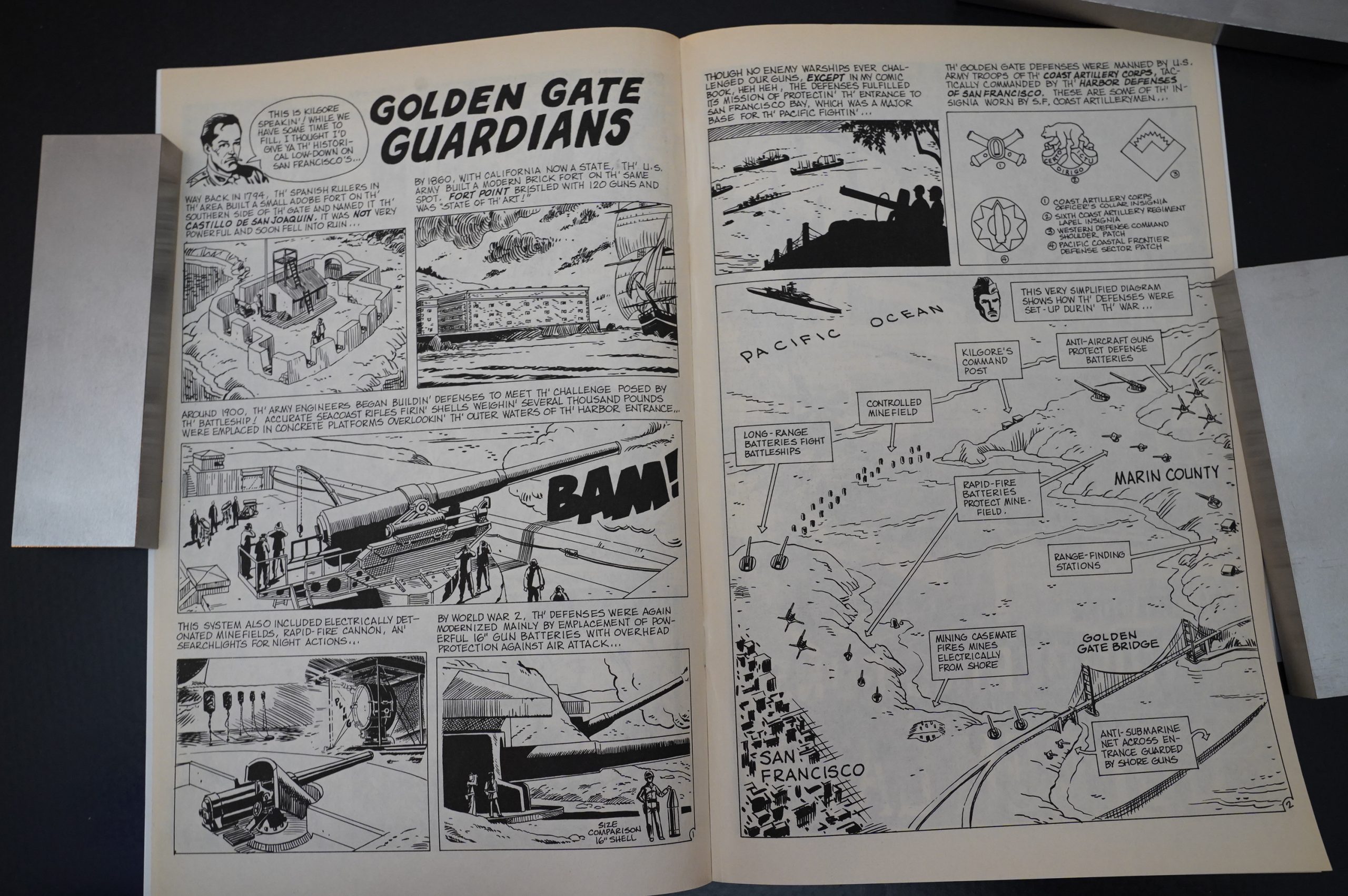 And then we get a two-page spread with… apparently… real historical facts? Or is this a joke? I can’t tell. 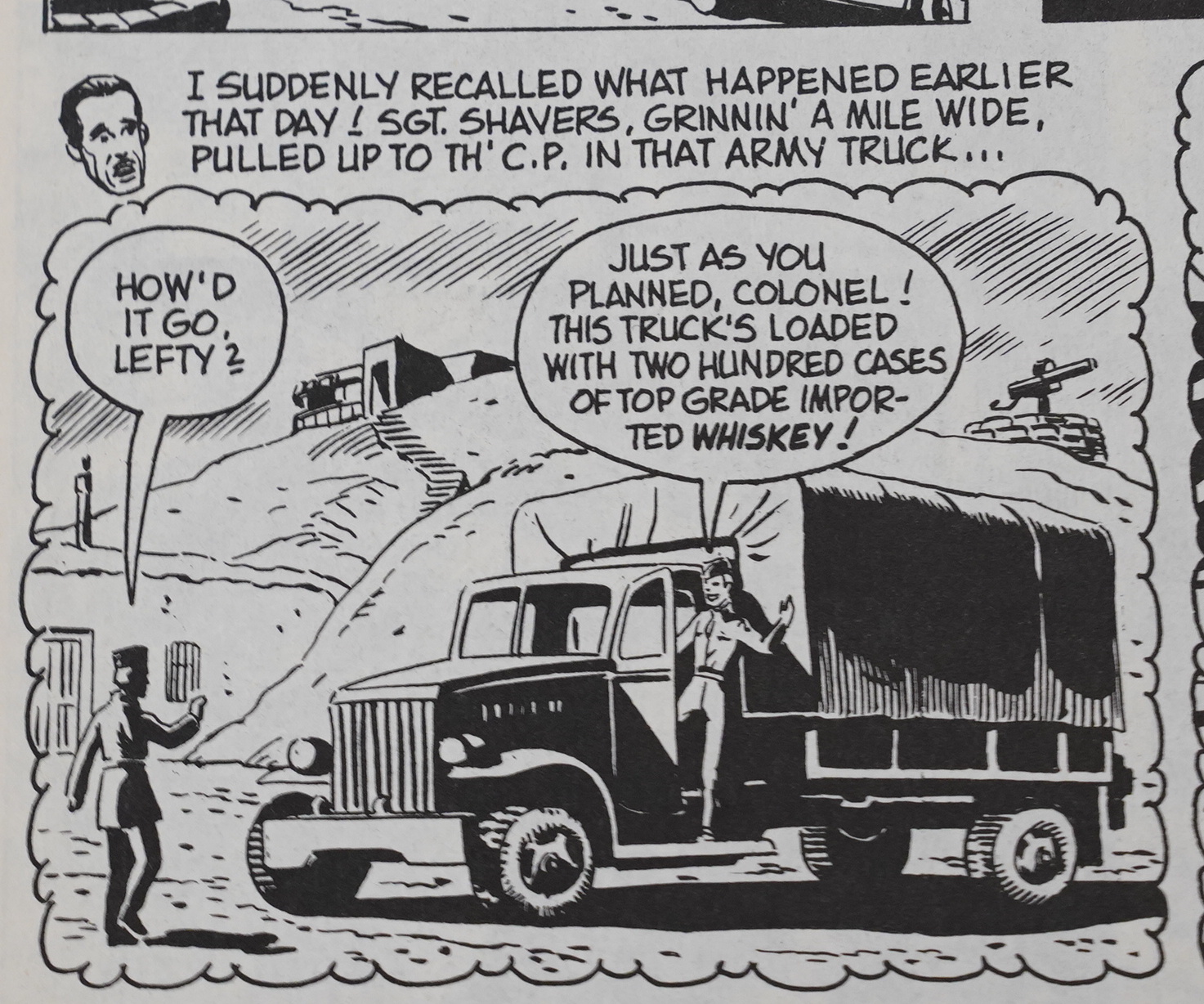 The creators apparently don’t think we have good short term memories, so they remind us of that panel up there. Which makes me wonder whether this series was originally meant to be serialised in an anthology somewhere? 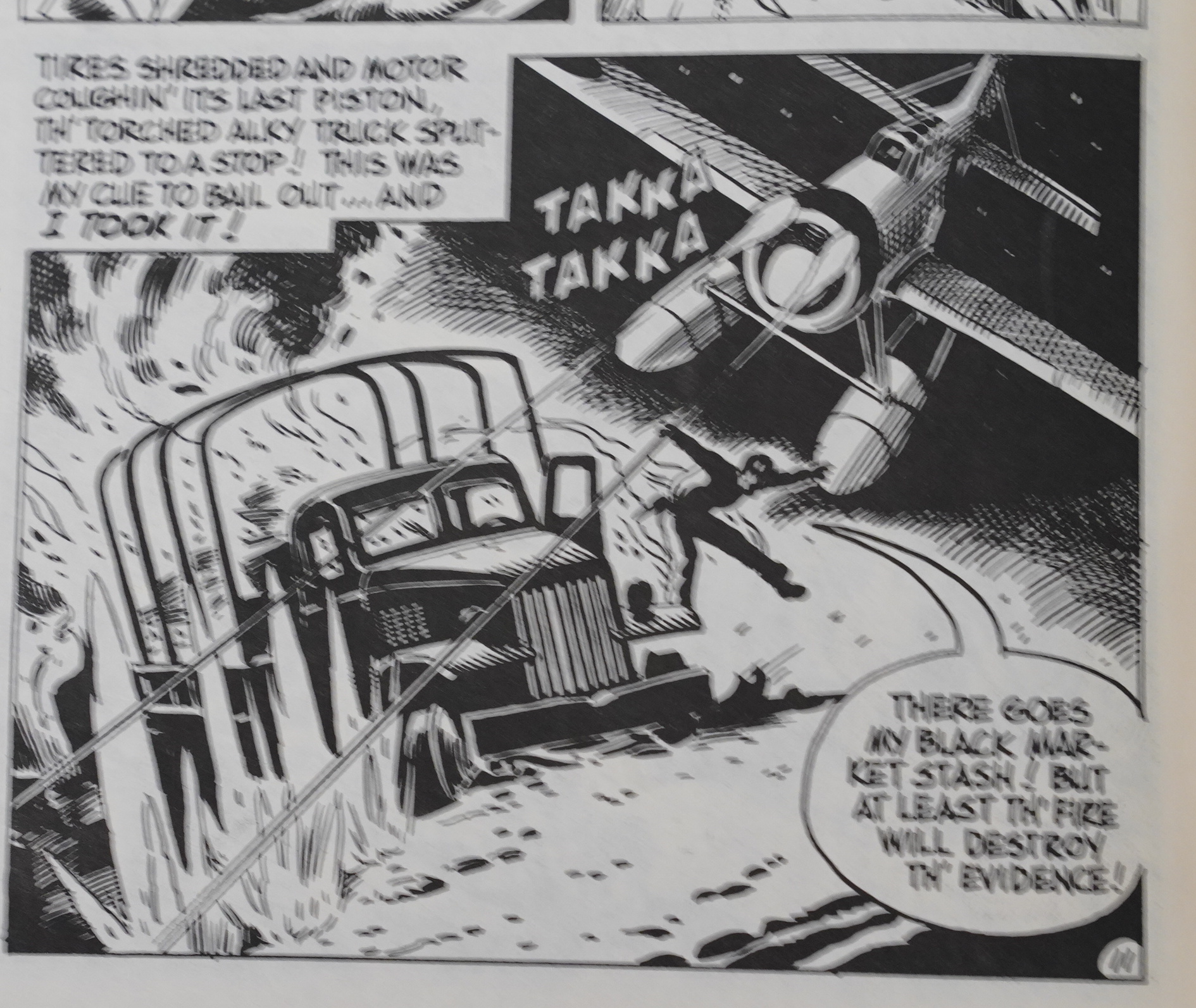 Anyway, it all ends with Kilgore being hailed as a brave war hero, because he’s got a guy to spin all these nonsensical stuff into a heroic narrative.

So at this point in the reading, I was going: “This is meant as a biting satire on military history? The most assholish of assholes in the military will be portrayed as heroes?”

It’s just that the artwork is so staid and standard that it’s hard to believe that you’re looking at outrageous joke after outrageous joke: That panel where Kilgore was riding on her shoulders should have been a dead give-away, but in the context, it didn’t read as Mad-like zaniness, but just… slightly humorous, bad WWII comics.

The other possibility is that I am, indeed, a humourless moron. 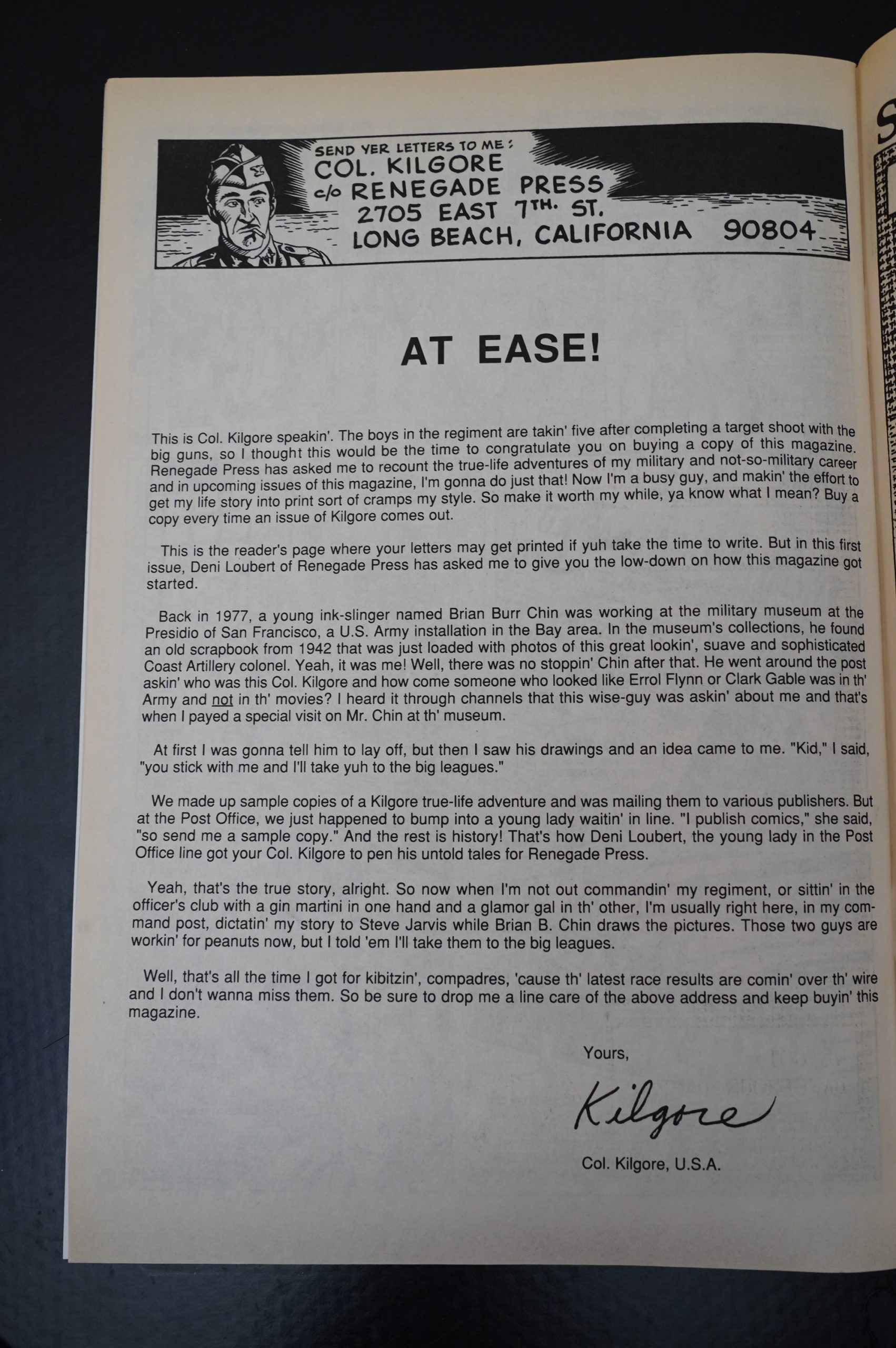 I have no idea whether anything on this introductory page is true, or is meant to be a huge joke. I mean, the central conceit of Kilgore writing this is a … thing … but did Brian Chin work at the military museum? That might explain the seemingly-accurate WWII stuff here. And as there’s no credits in the first three issues, this is the only intimation that the writer (?) is Steve Jarvis, but that may or may not also be a joke. 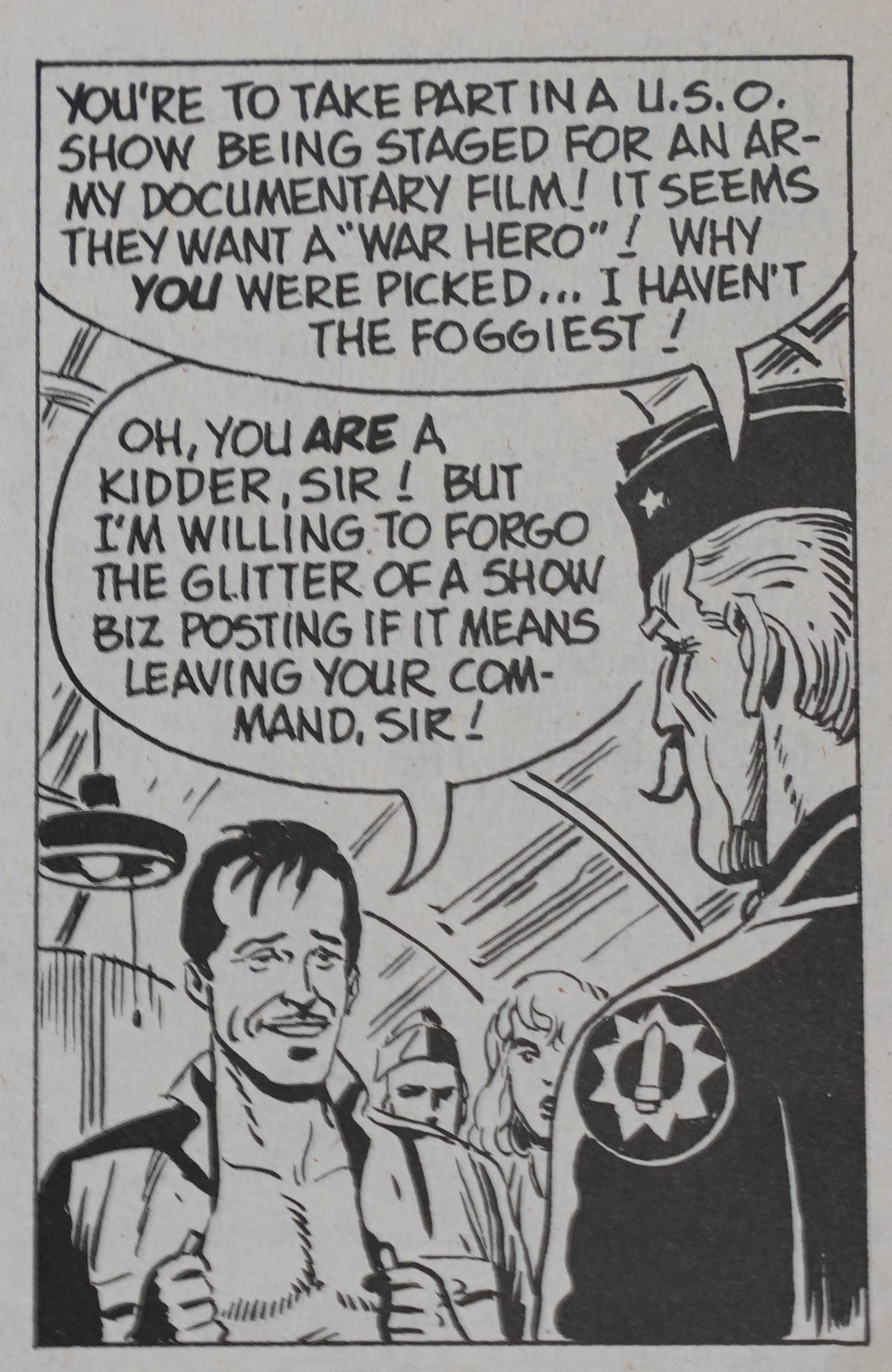 A serious problem with this comic is that the writing is just bad. I mean on a sentence by sentence basis.

In the second issue we drop by Norma Desmond at random — presumably because Chin just wanted draw her? What happens in this scene has no repercussions on the… storyline, if you want to call it that. 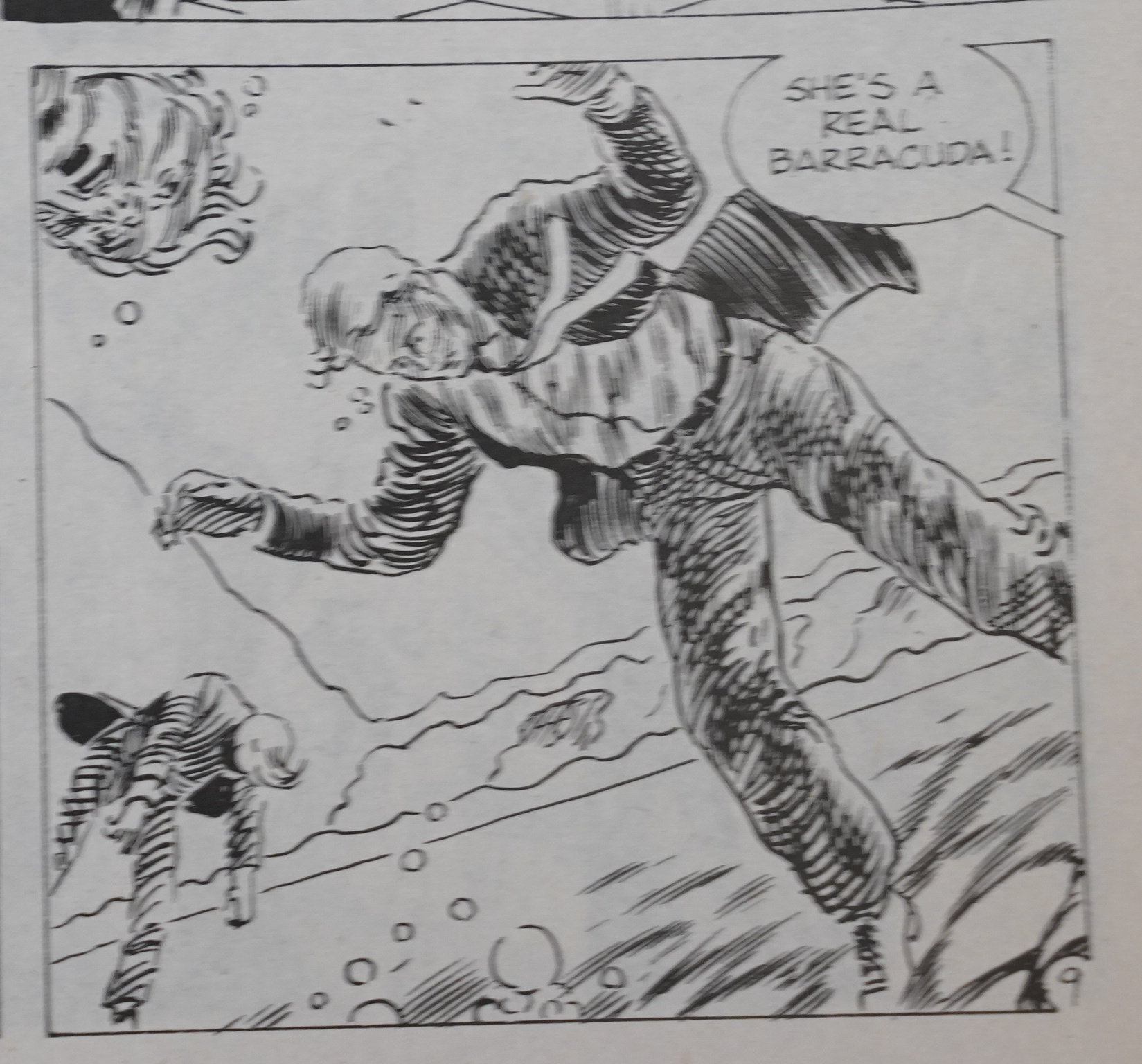 In this version, she’s a mass murderer with (at least) three dead men floating in her pool at the same time. Was the reason for doing those pages just to get to this … punchline? 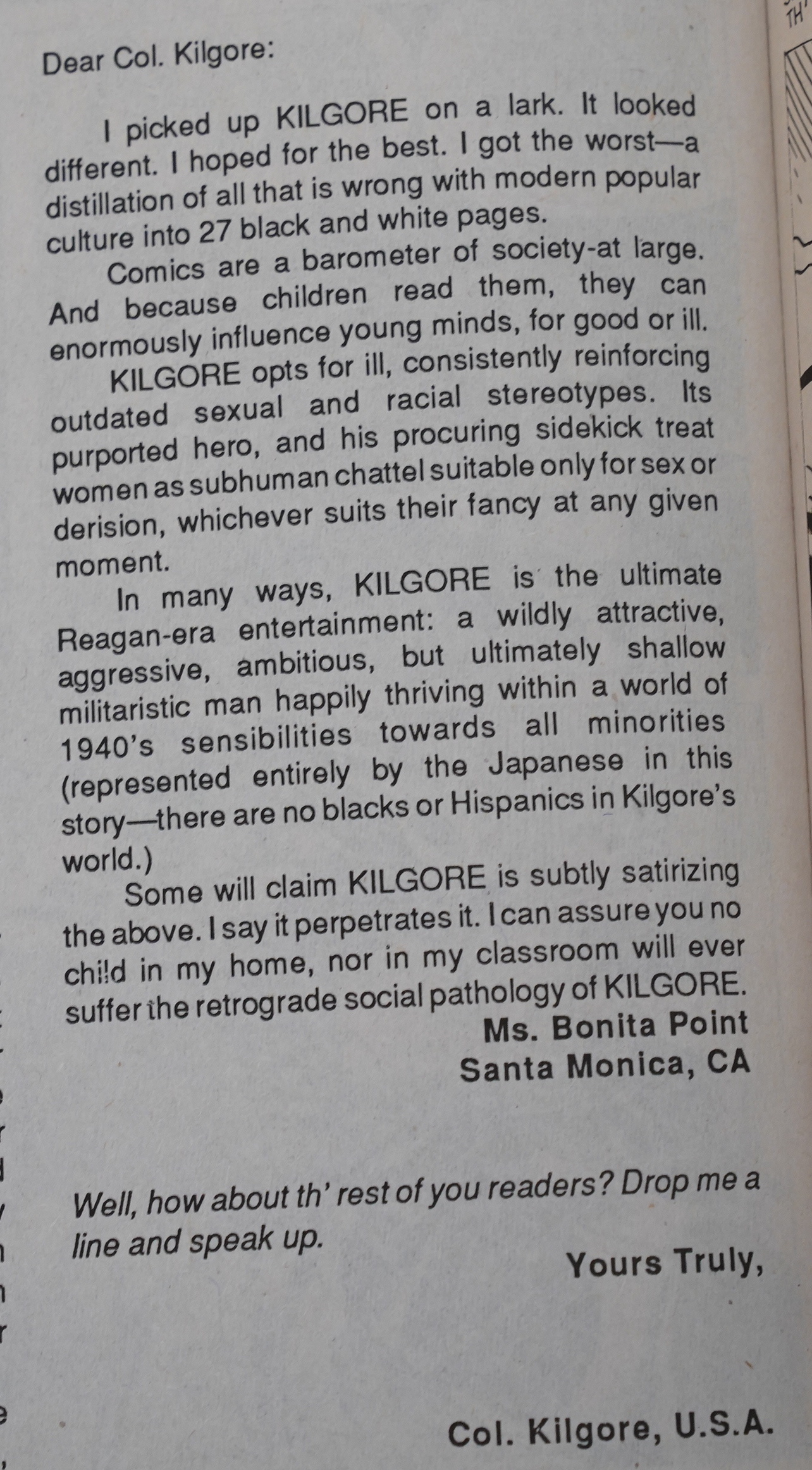 A writer voices her disapproval of Kilgore — like me, she seems to have a problem with reading the book as goofy over-the-top zaniness: The furthest she’s willing to go is “subtle satire”. (Another reader likes it a lot and says “I supposed it’s supposed to be a comedy”, and the rest seem to think it’s straight-up adventure.)

This back-up strip, where Kilgore is a TV preacher, makes the point a lot more clearly. 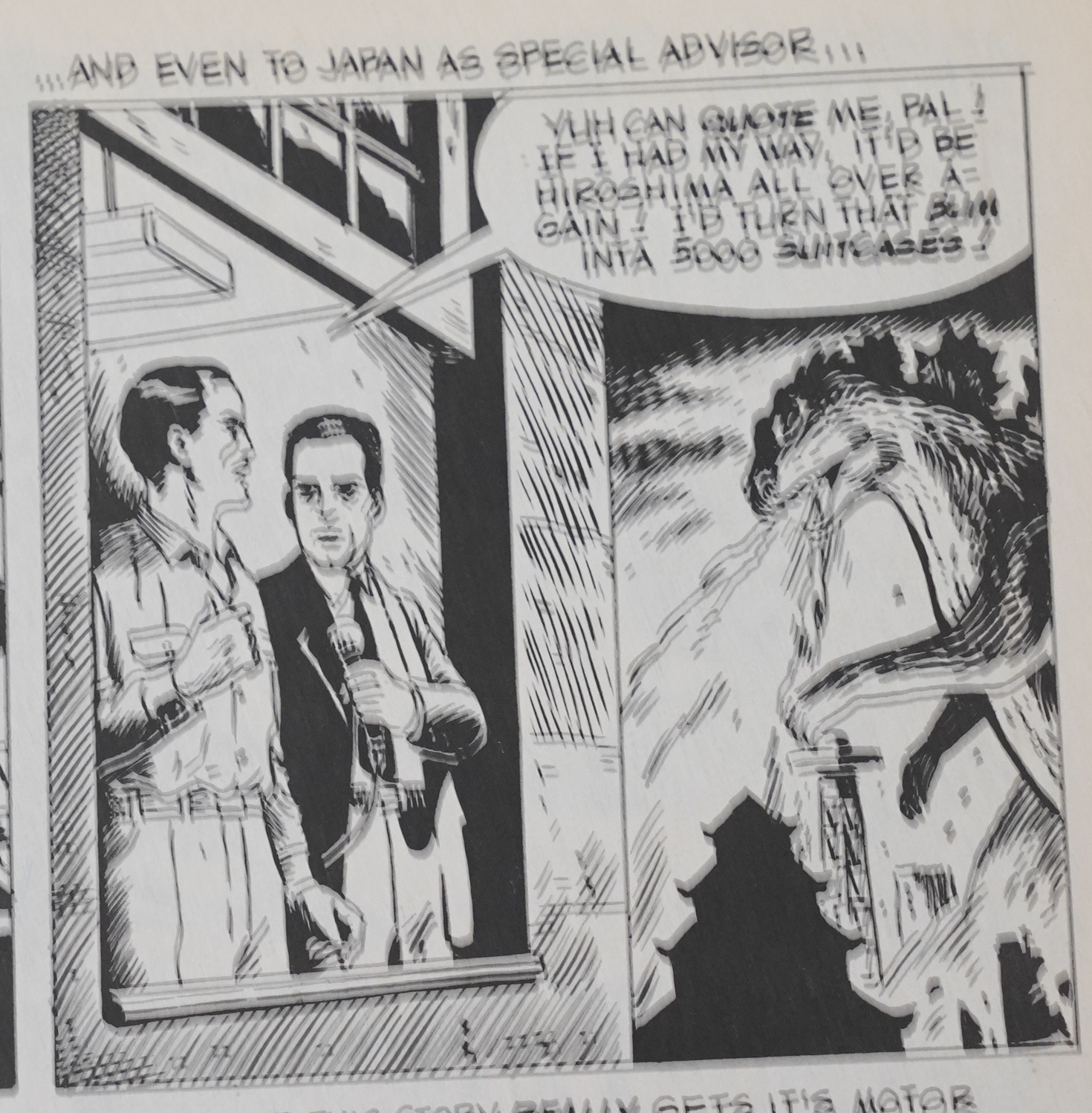 Anyway, in the third issue, Kilgore fights UFOs and Godzilla. 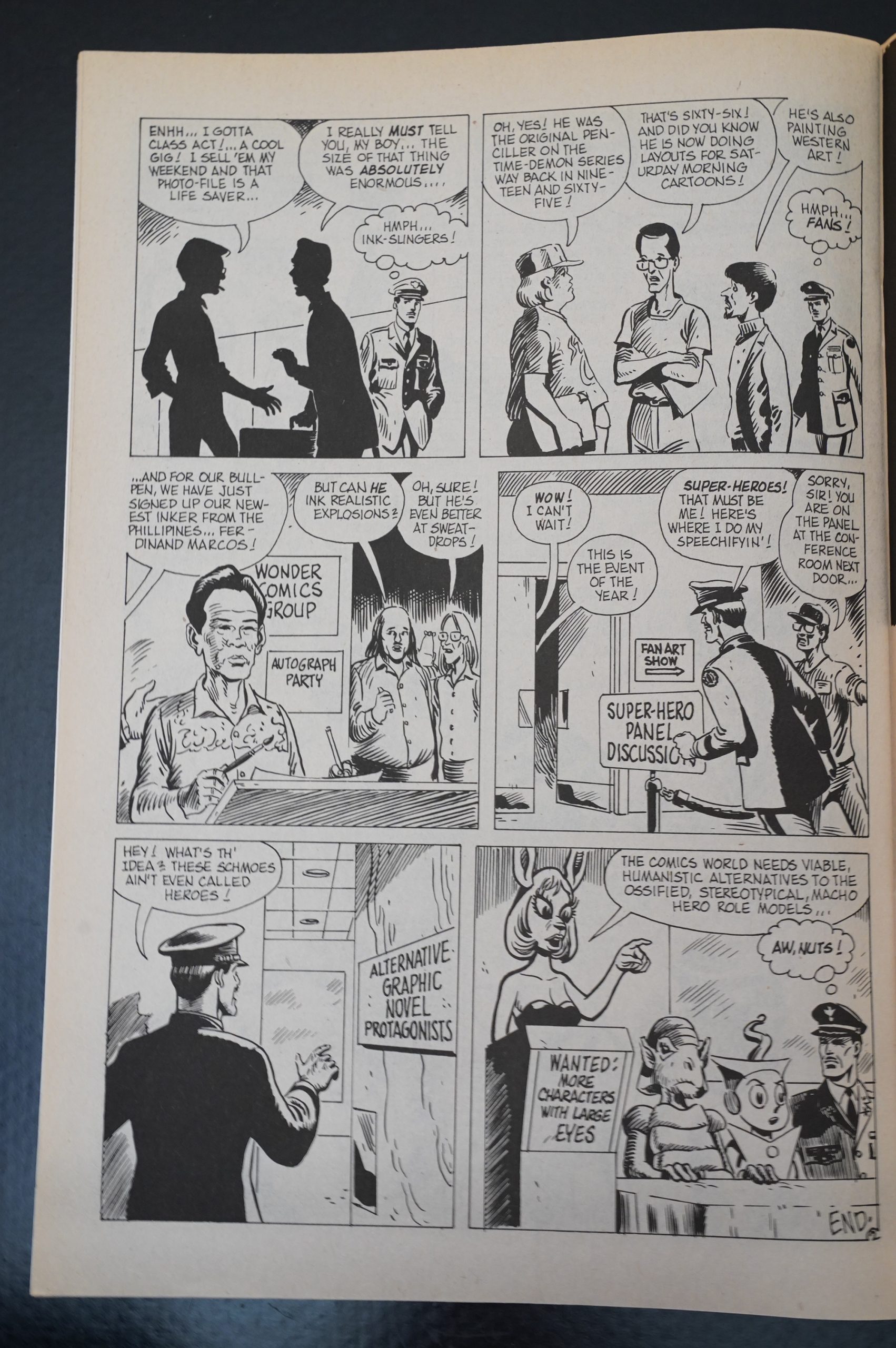 And visits a comic book convention. 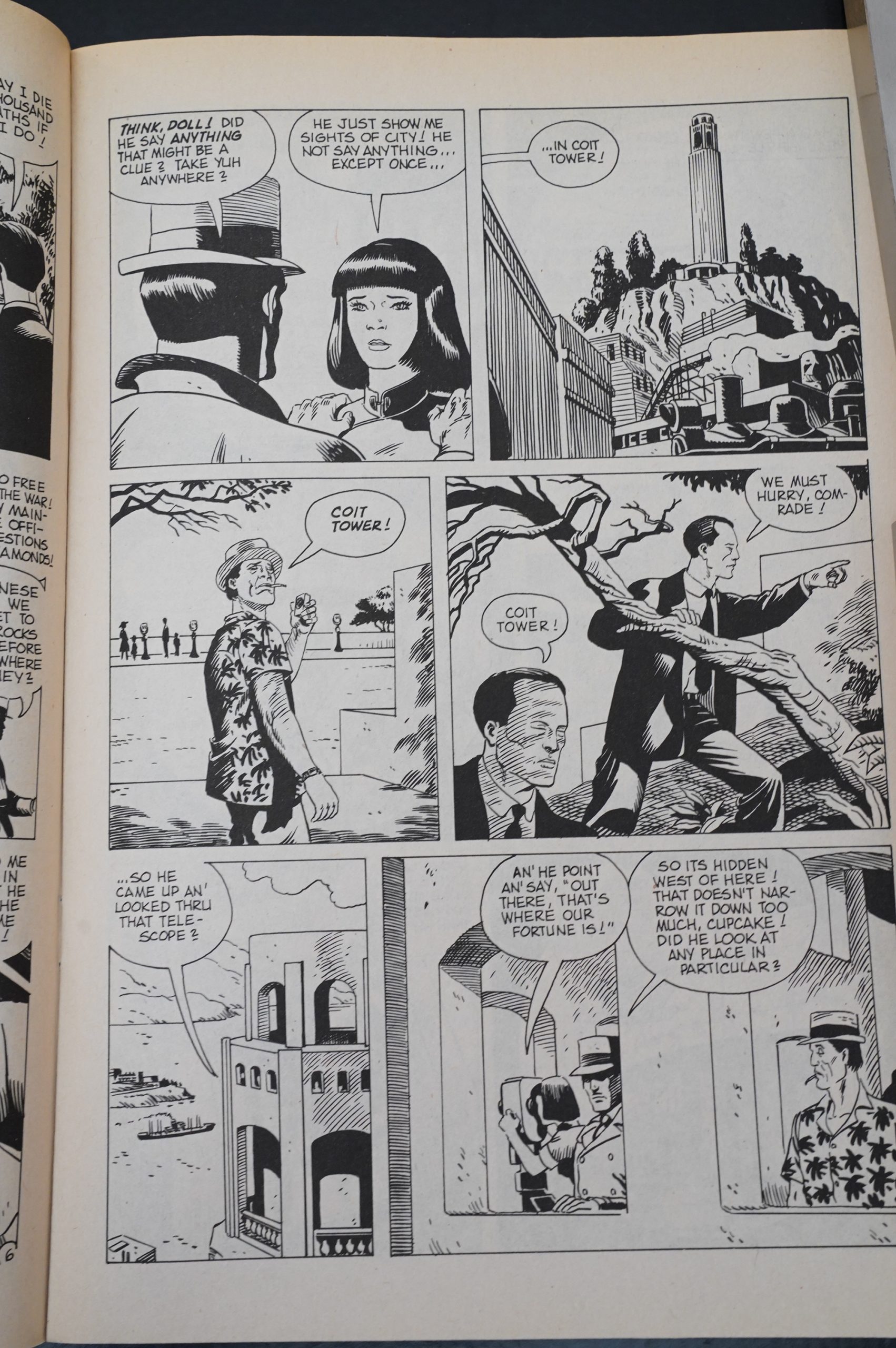 The fourth and final issue has the best artwork of the bunch: It’s cleaner, and we get to a look that’s quite John Severin-derived. Some of these pages are really good. It’s a shame that the plot is basically a noir McGuffin chase with little humour. (And it has nothing to do with the military.) 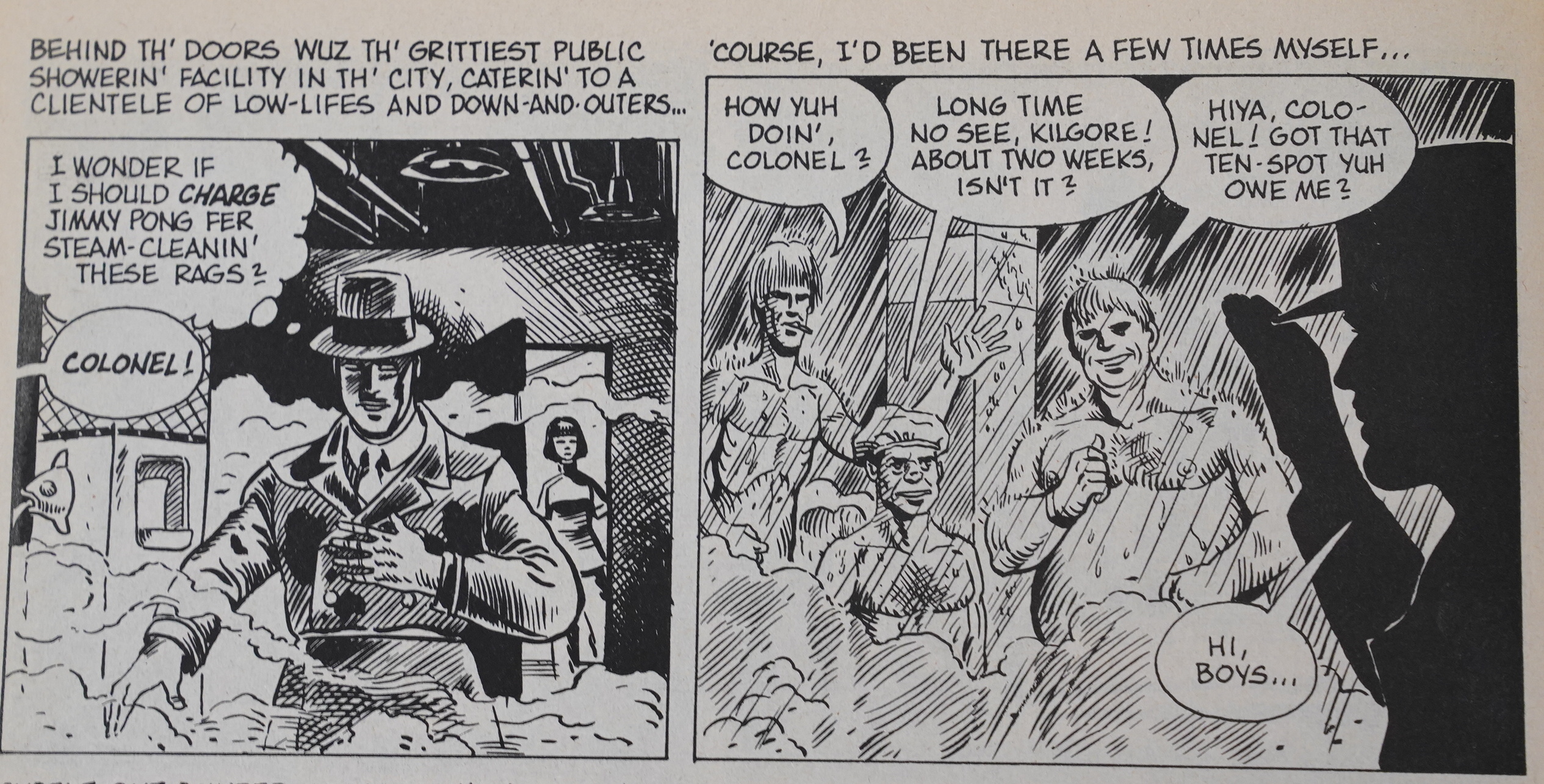 But at least we get a peek into the San Francisco bath houses. I mean, showering facilities. (That is apparently just a grotto with no fixtures, and the water just… comes from the ceiling…)

Most of the Renegade series that were cancelled got some prior notification, so that they could at least say goodbye on the letters pages, and swear to return at a later date. That didn’t happen here.

This series was reprinted a couple years later, and the final two issues (as mentioned above, this was planned as a six issue series) were supposed to be created, but that apparently never happened. The publisher, Diamond, apparently specialised in picking up Renegade series: At least half of those are Renegade-derived.

No doubt you know’ that these are the
true adventures of Col. Kilgore and have
been chronicled by creative team Brain
Chin and Steve Jarvis. COL Kilgore
wanted his biography written up for
posterity, but felt that it should be
accompanied by illustrations so that the
reader will really feel that he was there
with the Colonel in the heat of battle.

In July, #5 is what I call the “Oliver
North Meets Godzilla” issue. Kilgore
meets a beautiful French revolutionary
and some dinosaurs, as well as attempt-
ing one of the most terrifying, death-
defying feats known to man—facing a
Senate Congressional Committee!
Well, I might as well finish up with
#6. due out in September 1988: There’s
a Kilgore guest appearance on the “Ben
Casey” television show. What more
could you ask for? CB Publications: The adventures of
Colonel Kilgore (by Chin with Jarvis)
are collected into The Kilgore Papers
#1, a $9.95 black & white softcover.

That didn’t happen, I guess?

KILLGORE
Written and illustrated by BRIAN CHIN; edited by
WENDI LEE
32 pages; $2.00; bi.monthly from RENEGADE
PRESS
According to writer/artist Brian Chin,
Killgore is based on a real-life person who
was active during WWII with the Coast
Artillery Defense based in San Francisco.
“The guy really existed, but he really isn’t
as sleazy a character in real life as I make
him out to be in the comic,” Chin told us..
In the comic, Killgore is a military man
who is a frustrated actor. To satisfy his
artistic bent, Killgore has a tendency to
turn any given situation into his advan-
tage. “He’s a bit of a practical joker,” says
Chin, “and he wants to make himself out
to be a hero.” Chin went on to describe
Killgore as a dashing figure in the Clark
Gable or Errol Flynn mold, with bedroom
eyes and a pencil-thin mustache. Done in
a “film noir” style, Killgore is “sort of” a
humor/adventure book.
In issue #1 a Japanese sub attacks San
Francisco and Kilgore finds a way to turn
the attack to his advantage. In #2 he is
down in L.A. to assist with their harbor
defense, and spends most of his time
trying to land a part in a Hollywood movie.
In #3 Killgore finds himself inj the ’50s
tracking down some aliens who landed in
the desert: seems he wants to land them
a spot on the Ed Sullivan show. (Appar-
ently, like Billy Pilgrim, Chin’s Killgore is
“unstuck on time.”) Issue #4 deals with
a mysterious lady from Shanghai.
The catch phrase for the series is:
“He’s not peace, he’s not war, he’s just
Killgore.”

I’m unable to detect any chatter about Kilgore on the intertubeses, but you can pick up the series cheaply if you should wish, although I really wouldn’t recommend it.