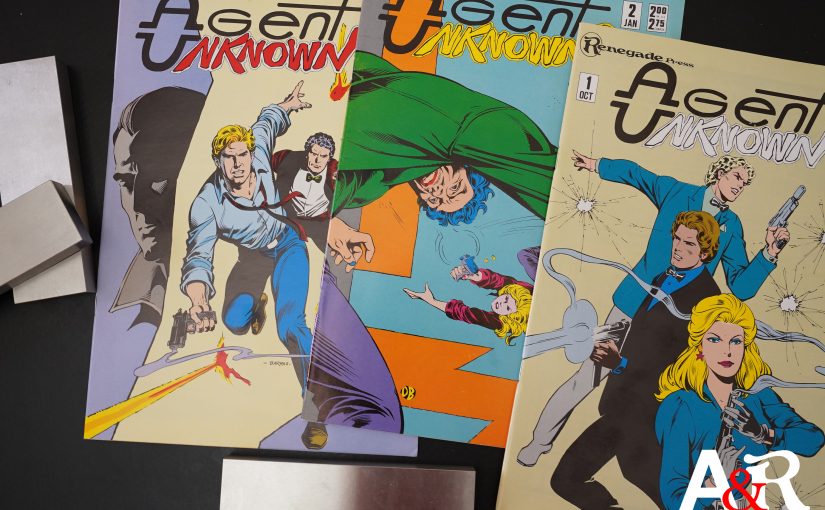 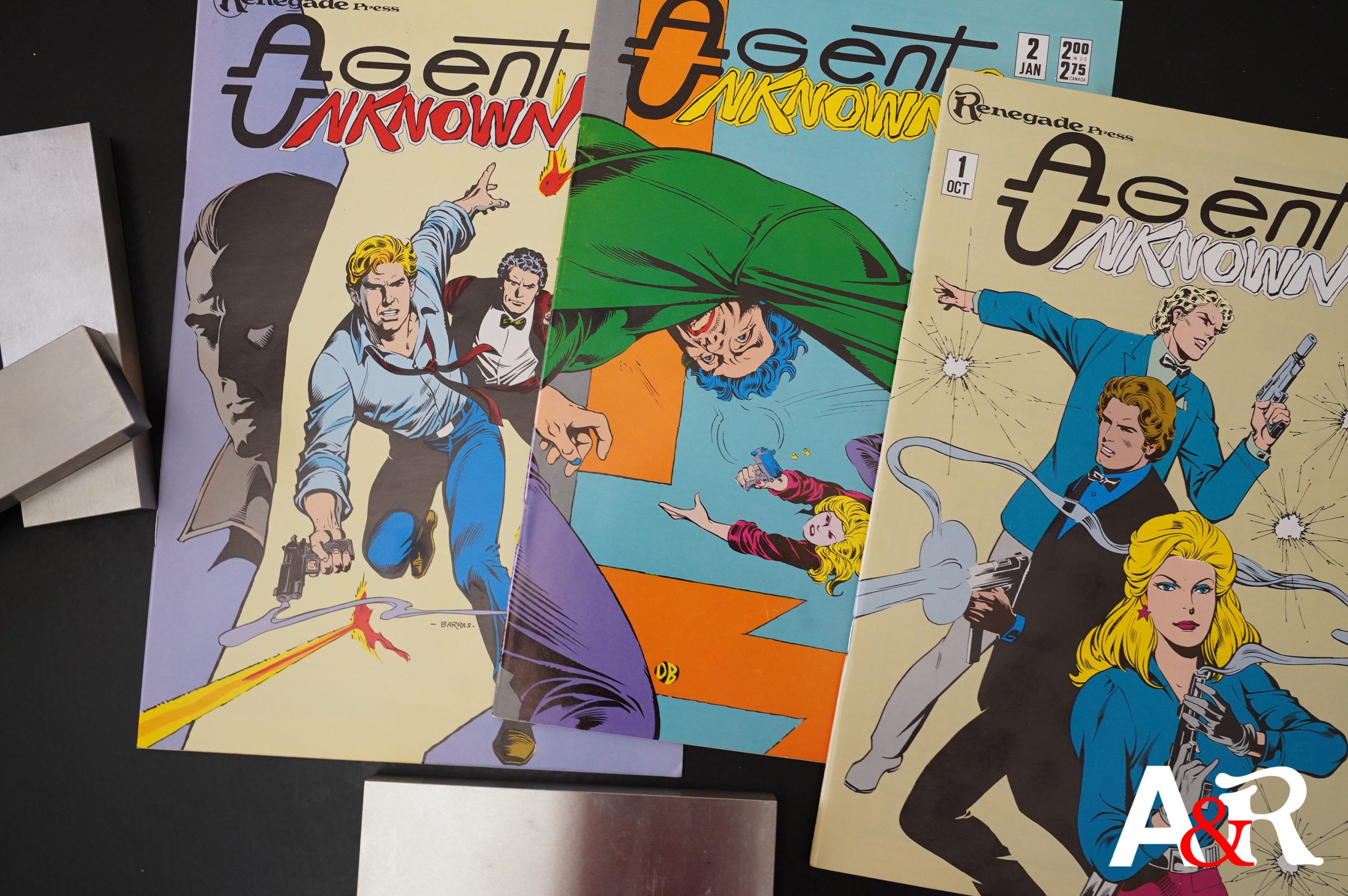 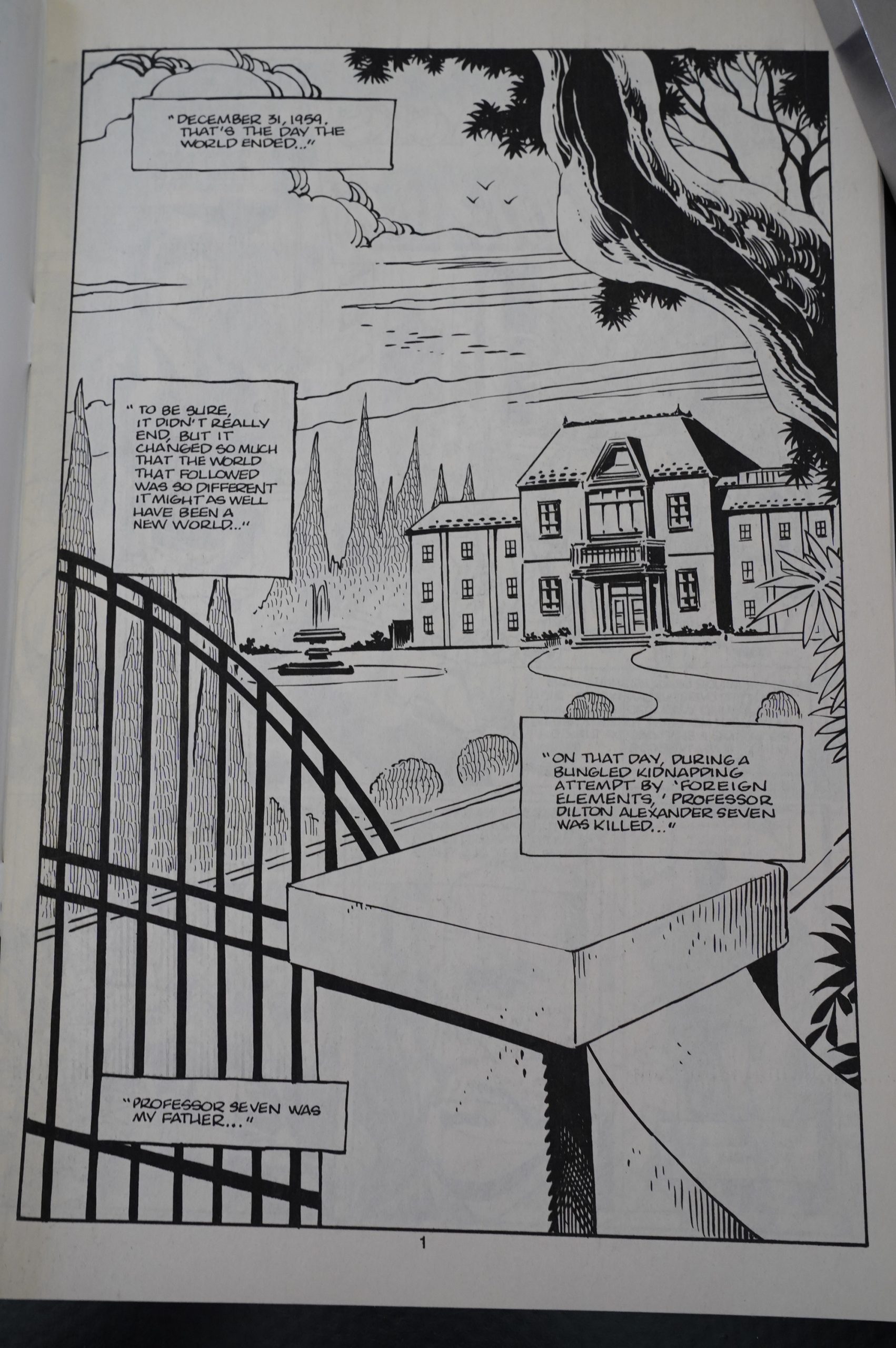 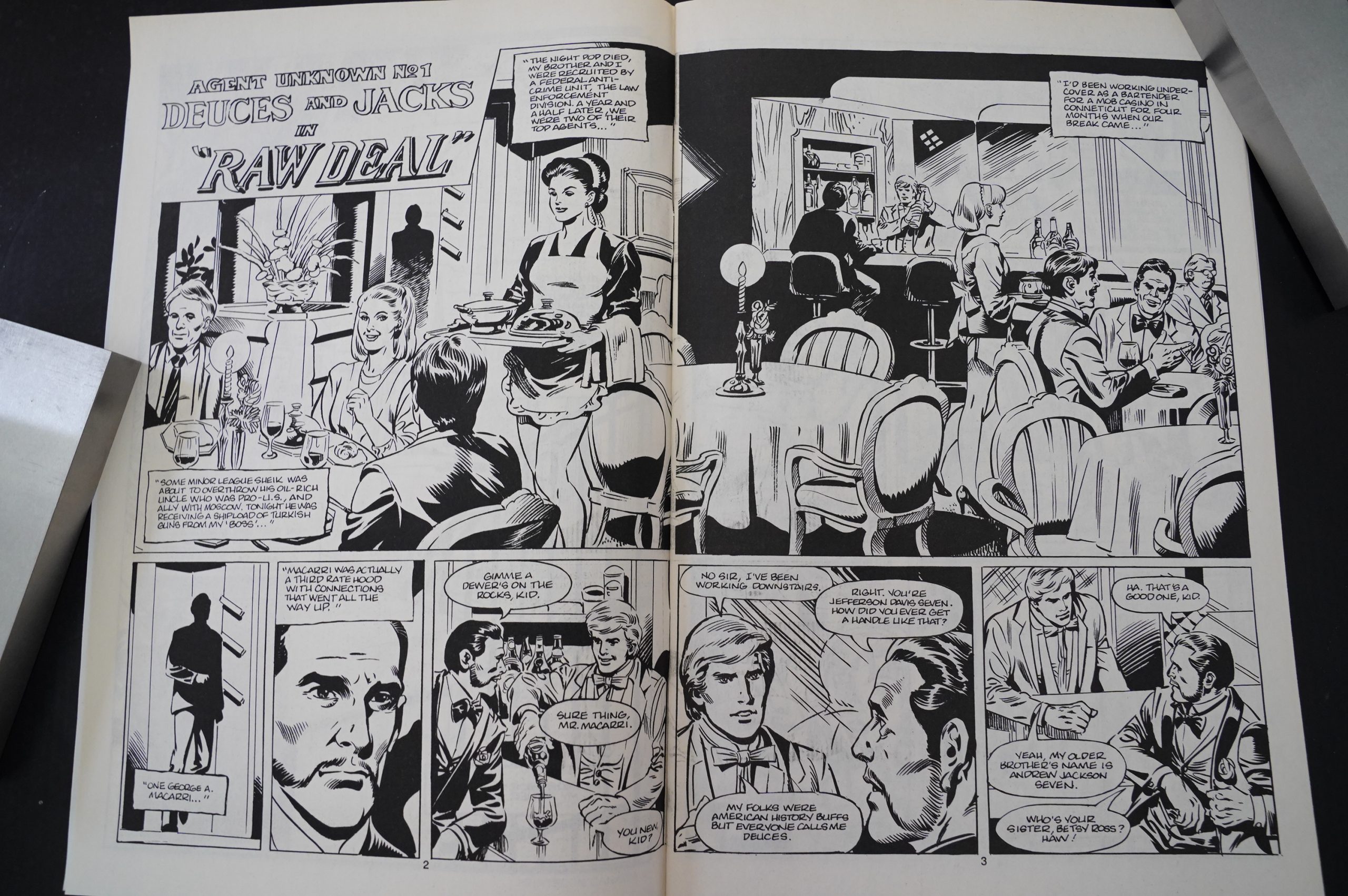 As usual in a Renegade series, there’s no contextualisation as to what we’re reading — my immediate thought upon seeing these pages was that this had to be a reprint of a Spanish comic… but I recognise Dell Barras’ name, and I don’t think he’s Spanish? Lan Medina inks the first two issues (I think; there’s no credits in the second issue). Or… is there a vague whiff of Japanese comics here in the rendering? I googled right now, and Medino is from the Philippines, which er let’s carry on. 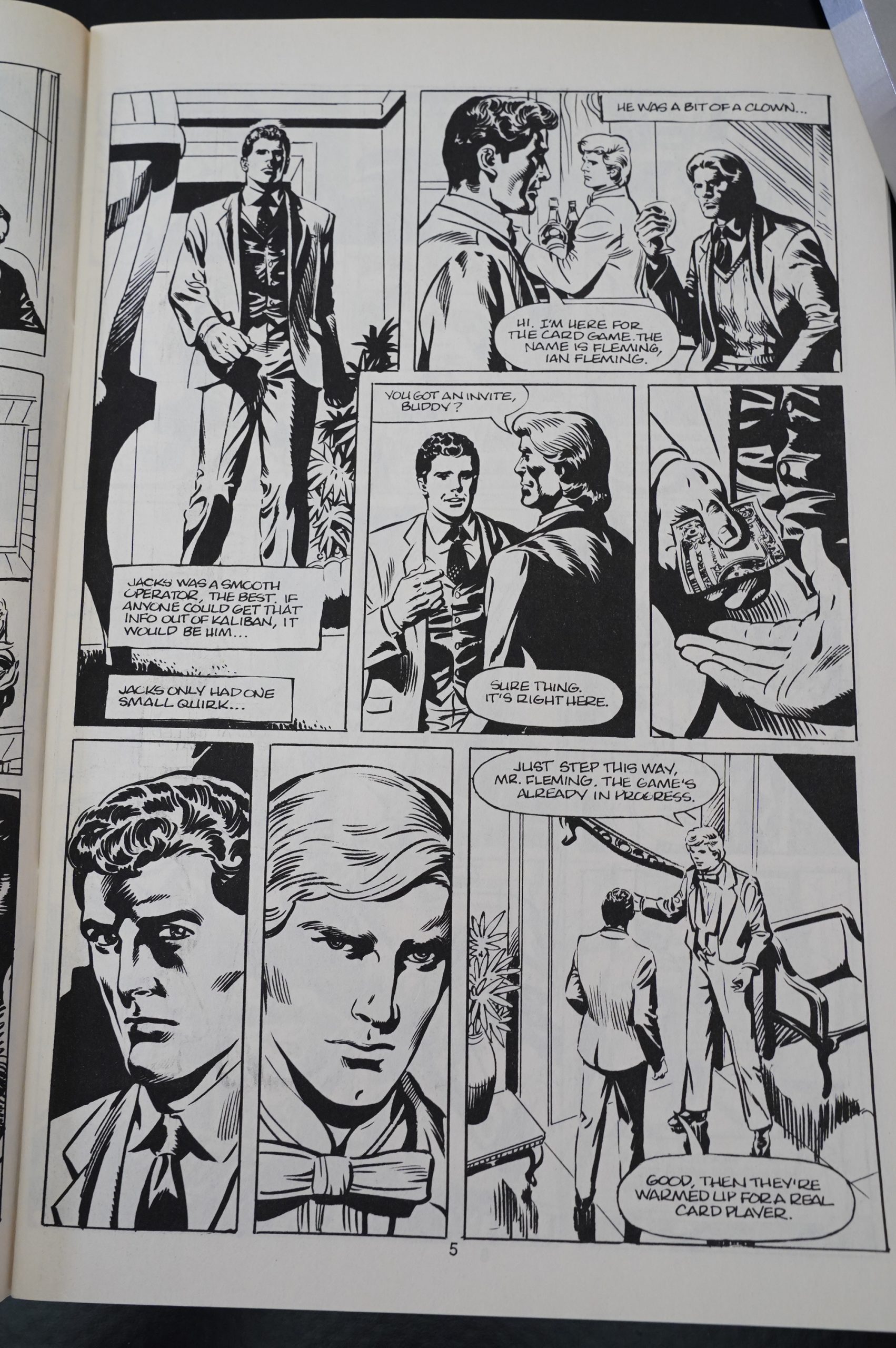 The storytelling veers from accomplished to incomprehensible… often on the same page. It’s not clear how these people are moving in relation to each other, or who they are, or exactly what’s going on here. So you have to resort to “well, that guy is blond(e)… but so’s that other guy… but one has a bow tie, and the other one has a sweater, so it’s the … sweatery guy that’s getting the money? But it’s the bow-tied guy that’s showing him in?”

I wish I could say I cherry-picked this page, but they’re basically all like this.

(Oh, the “accomplished” part was about the look dark-haired-guy and bow-tie-guy exchange — that’s pretty nice.) 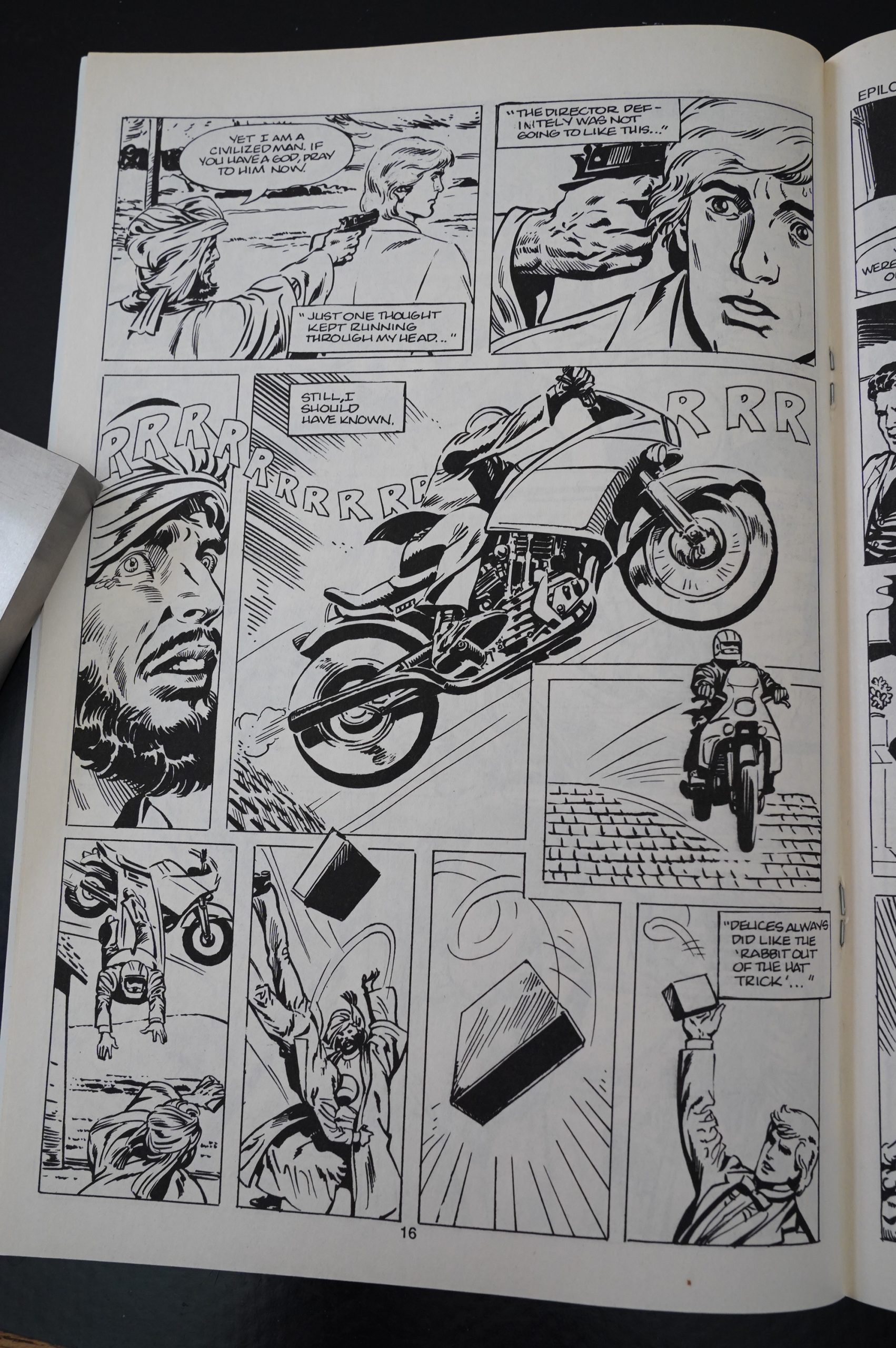 I guess you can tell what’s going on here, but… it doesn’t make much visual sense. 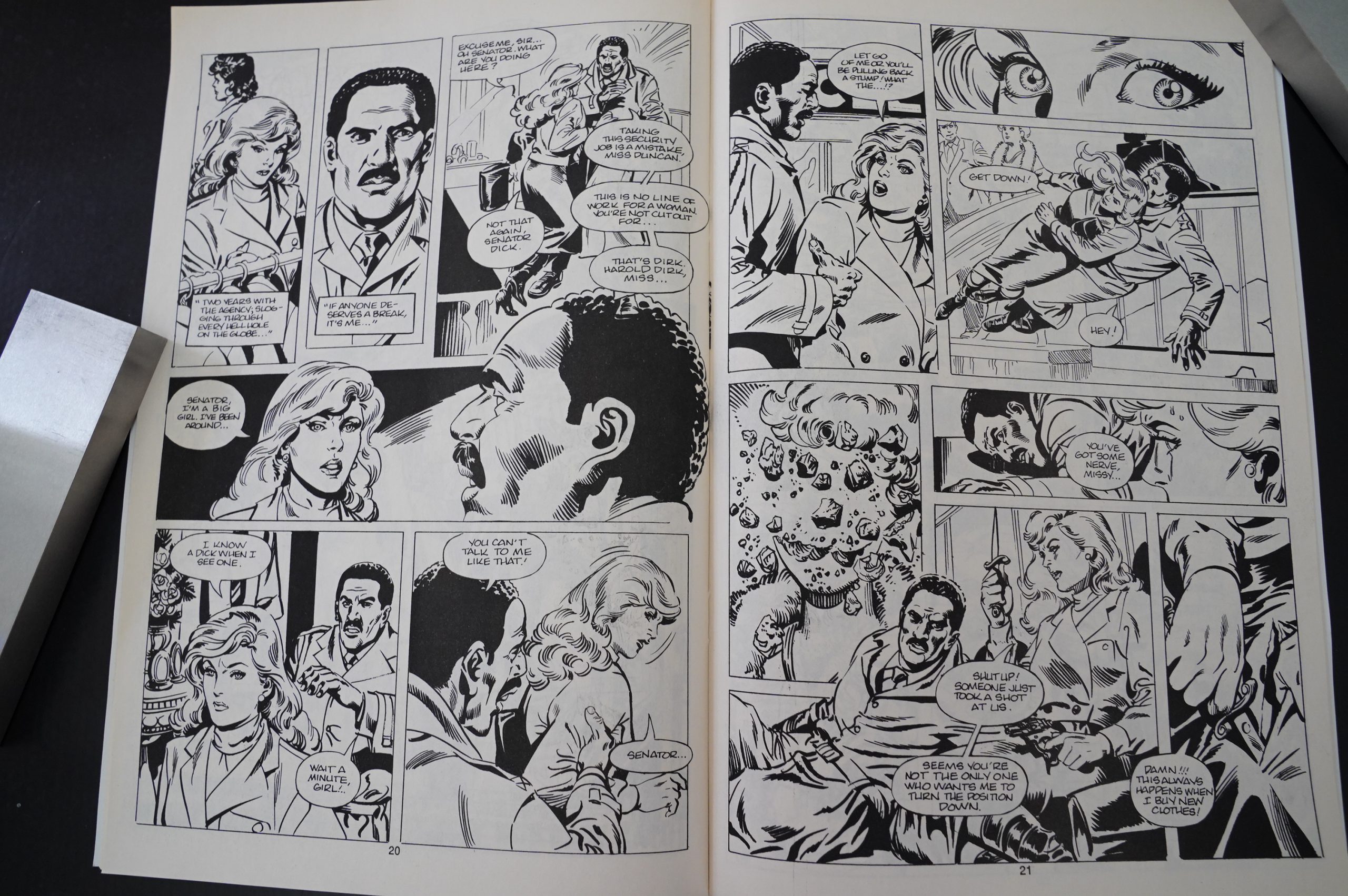 There’s two stories per issue — the backup feature is by the same creators, but is about a different secretish agent. 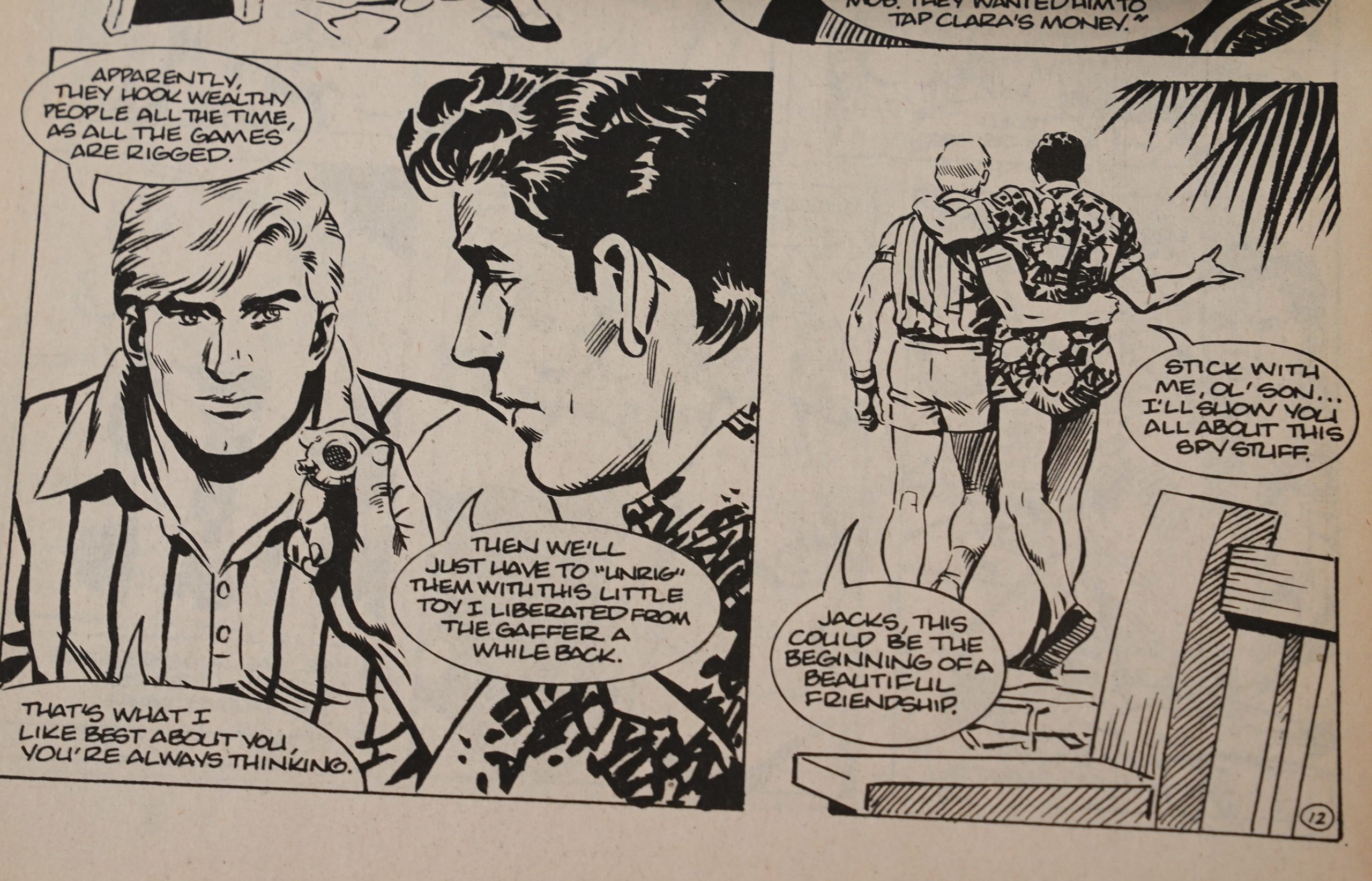 I think those two are brothers? I’m like 80% sure they are? So this is witty repartee… but since the book hasn’t really established for sure that they are, it’s… “Ol’ son”… weird… 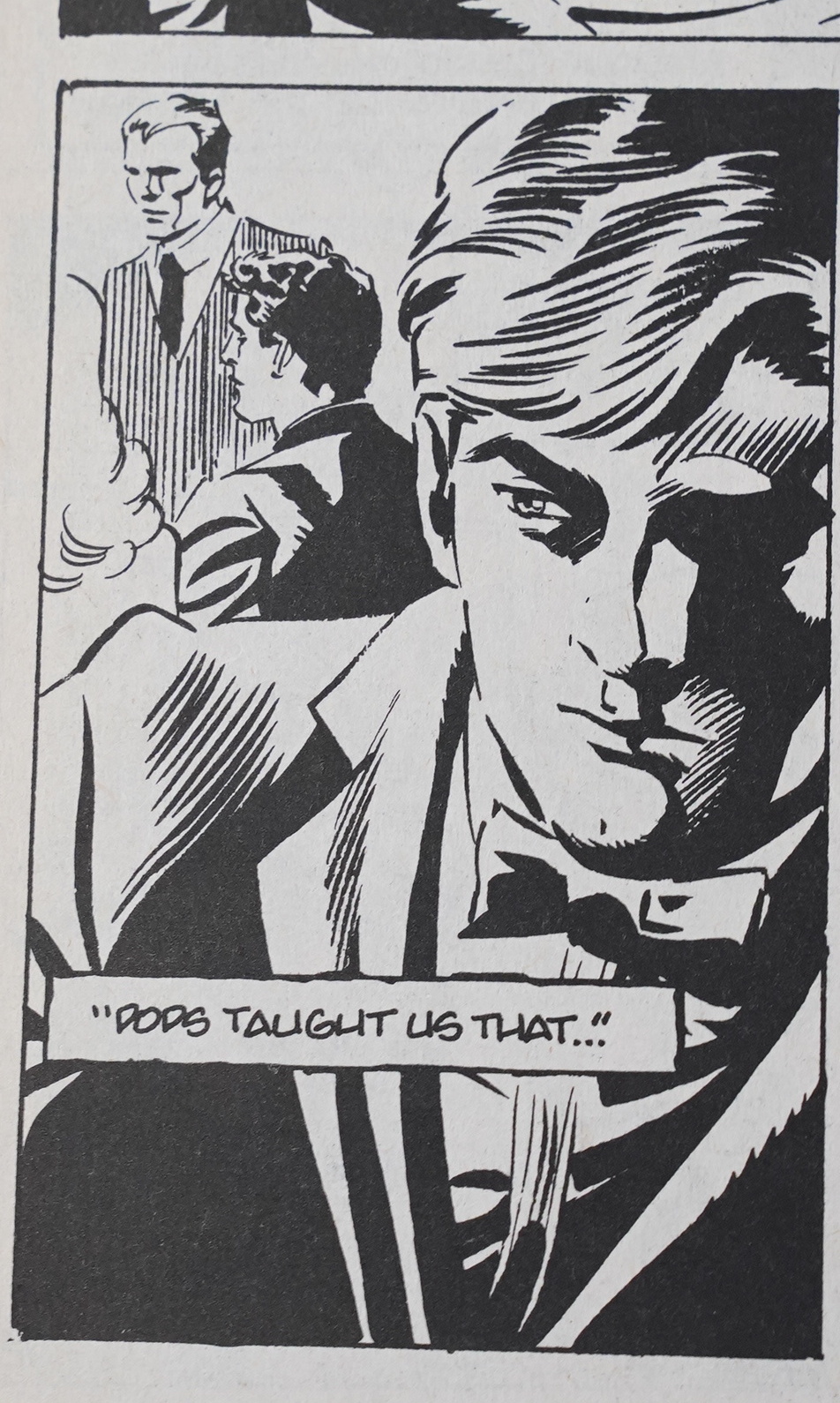 Some of the panels look a lot more like Japanese comics than others. 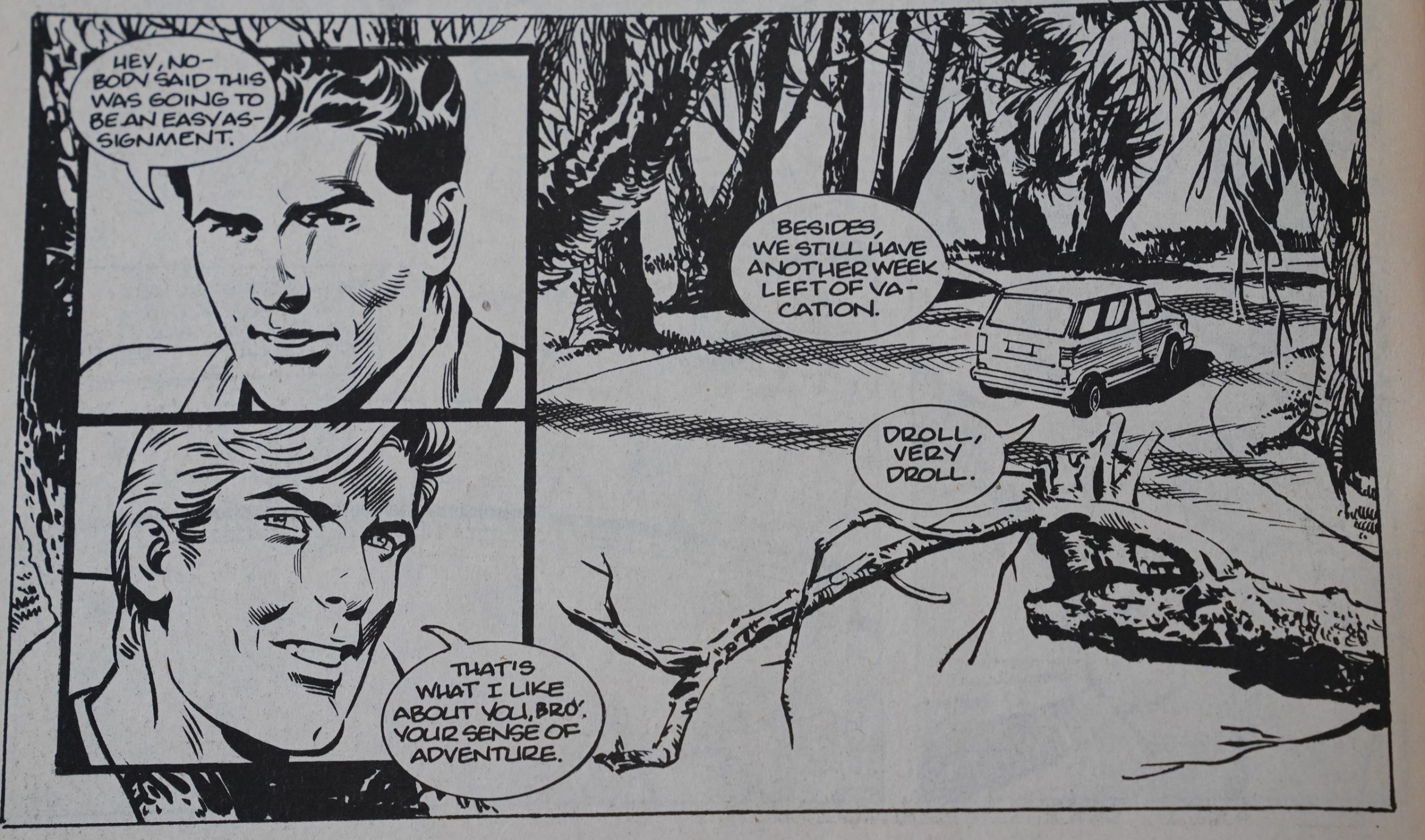 Is it? Is it droll? What’s droll about it? WHERE”S THE DROLLITY!!! 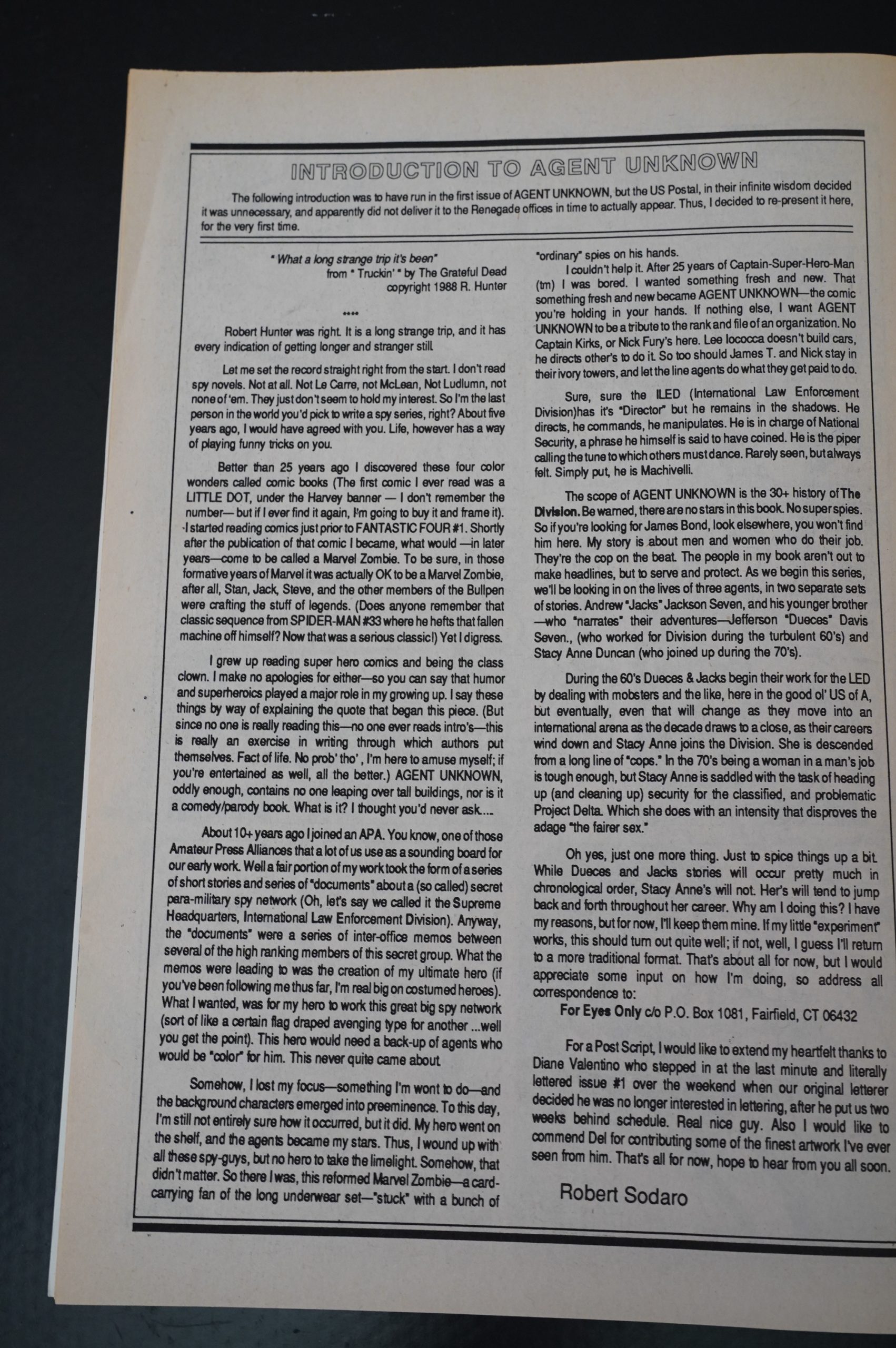 In the second issue, we get the contextualisation that was missing from the first issue: This is not a reprint from a Spanish action comic, but was thought up by Sodaro, who was apparently working for Amazing Heroes at the time. Which explains a lot.

And he seems to have pretty grand plans for the series… 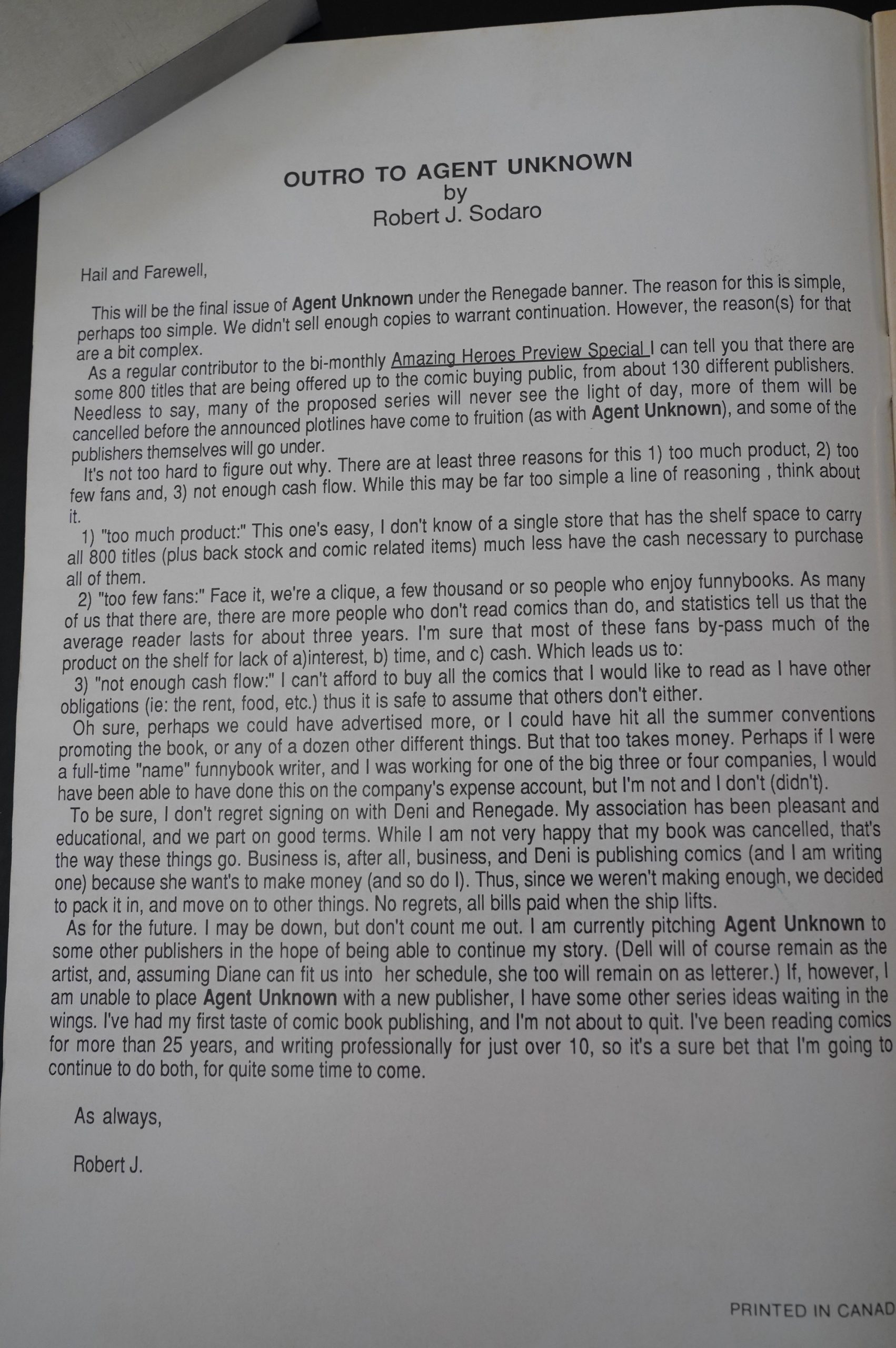 He ends with a threat: He’s gonna continue the series at another company, or if that’s not possible: He’s gonna make other comics. It seems like he carried out his threat, but is mostly writing about comics. 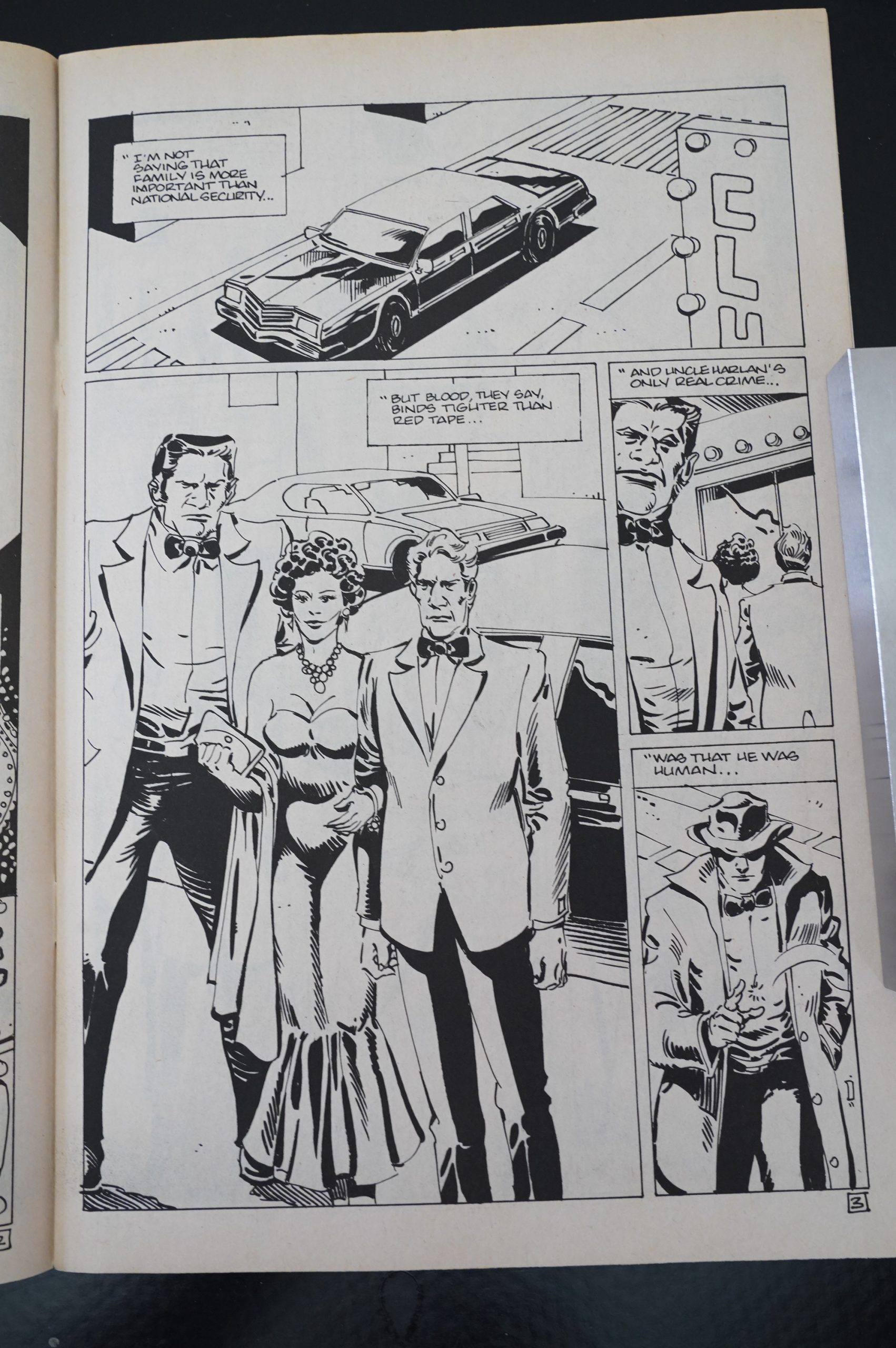 The final issue is inked by Cesar Magsombol, and it’s clear how much of the Spanish/Japanese look was from the inker: This looks totally different, and… 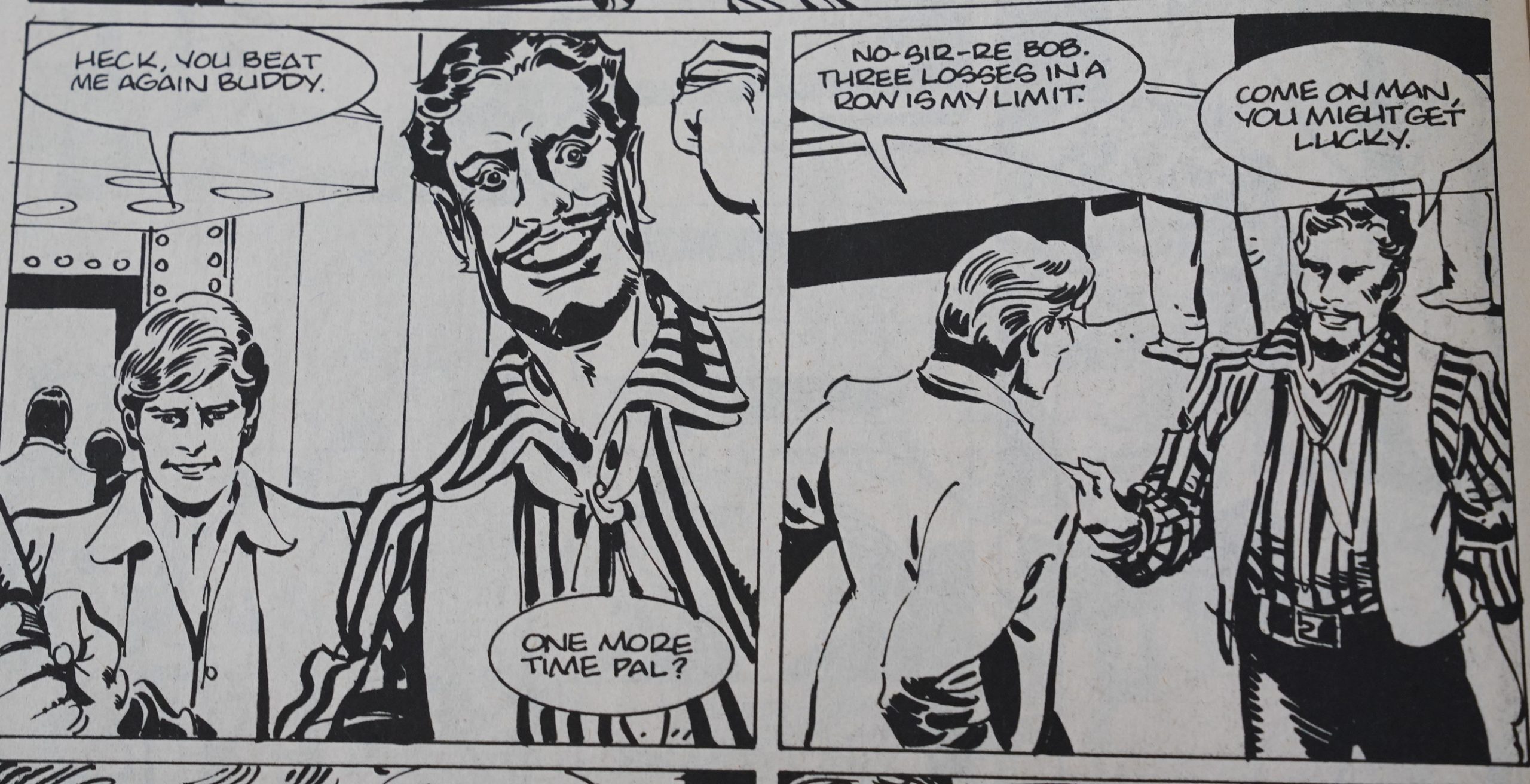 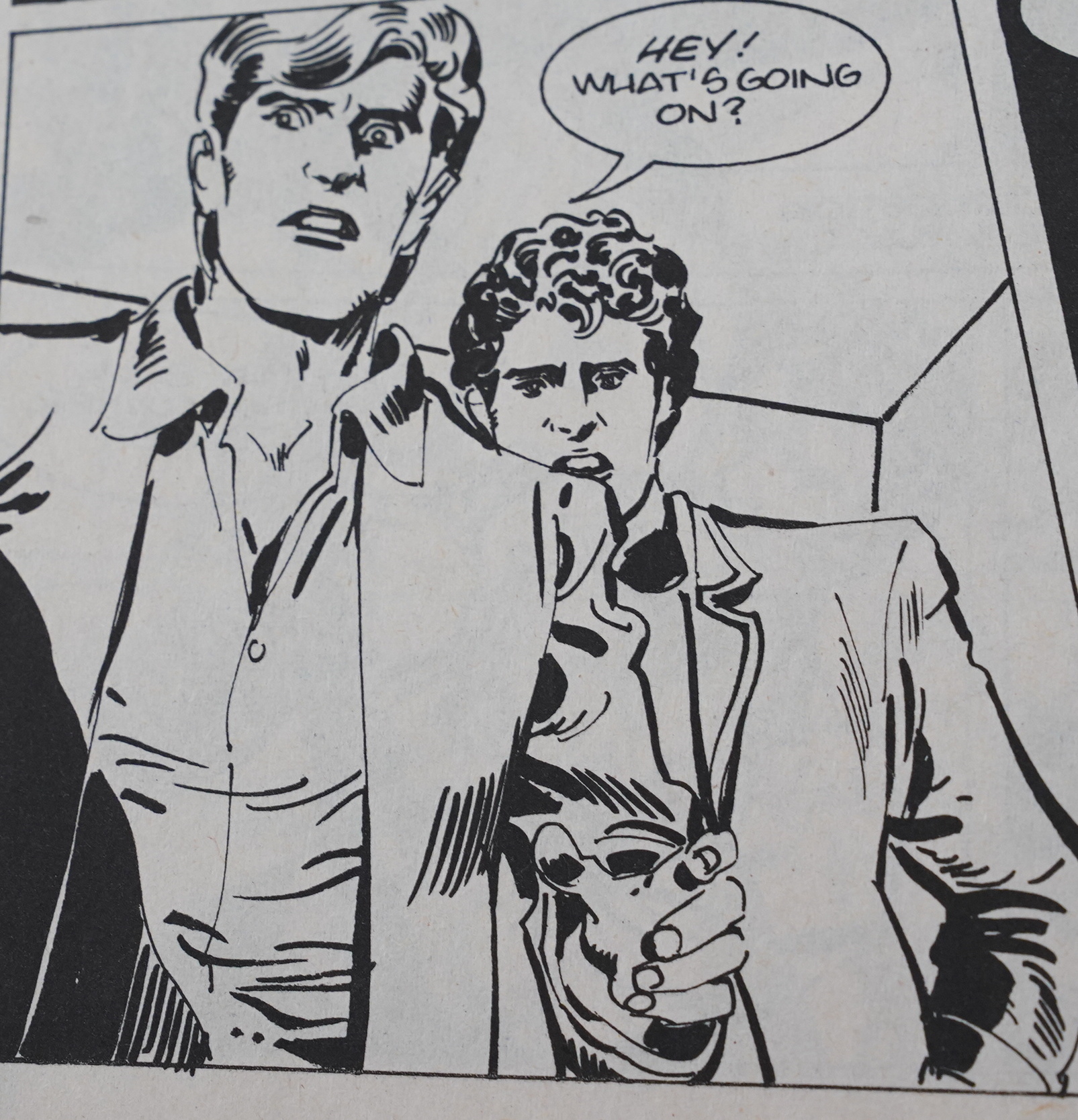 I would not be able to tell you: That final issue was incredibly badly written, even on an Agent Unknown scale.

This series was not continued anywhere, and has apparently never been reprinted… except in the Norwegian Agent X-9 magazine, which made me titter a bit, because they’ve carried so much junk over the years. But even they limited their exposure to a couple of the back-up stories featuring the female agent.

“They carry guns, badges, and they have
their government’s permission to kill
people.” This is the premise for this new
spy series premiering in October. It
features a sweeping storyline where it is
the rank and file of an organization that
are the featured players, rather than the
high echelon officers. “l always found it
odd that a Captain Kirk or a Colonel Fury
would always lead off all action by their
respective organizations,” writer Robert
Sodaro told us. “In Agent Unknown it is
the agency, not the agents themselves,
who is the star.”
The book will be broken up into sec.
tions to tell the 30-year history of a top
secret governmental organization known
as The International Law Enforcement
Division (ILED).

In the initial six issues of the series,
Sodaro will be concentrating on intro-
ducing and defining the main characters
of his cast, which include the three
previously mentioned characters, as well
as Larry Haloran, a tough-as-nails ex-MP
whose wife and son were killed by terror.
ists; and David Benjamin Stryker, an ex-
Mossad Israeli, both of whom now are line
agents within the Division. “With Agent
Unknown I’m attempting to put the secret
back into secret agent stories,” concludes
Sodaro.

RENEGADE PRESS will discon-
tinue ROBERT J. SODARO & DÉL
BARRAS’s Agent Unknown after
issue #3. Publisher DENI LOUBERT
cited “A lack of reader support,” as
the reason for the cancellation, but
SODARO actually suspects a govern-
ment conspiracy to suppress the cur-
rent flood of classified information
being leaked through the comic book
industry. Either way, the book is
done, for now.

More rumors, and debt. “I talked to
Deni because she owes me money for
Agent Unknown,” said writer Bob
Sodaro. “She told me she’s closing up
shop.
‘ ‘I just asked her how things were
and she was nebulous because she
wasn’t sure on what she’d be doing
other than trying to close up shop with-
Out owing any money. I heard this
straight from her,” Sodarosaid. “She
just said she was tired of being a pub-
lisher and worrying about money all
the time and she wasn’t having fun any
more.”
Sodaro, whose book Renegade re-
cently cancelled. said Louberl told him
she was “in the process of placing pr0-
perties with other companies,” was
‘ ’embarking on a writing career, ” and
“thinking of opening a handy-craft
shop.
Apprised of Loubert’s response to
such reports, Sodaro said he “might
have read too much into” their con-
versation.
‘ ‘I just got the impression she wasn’t
going to publish for a while.” he said.
“She told me she didn’t like being a
publisher. that she spent too much time
worrying about money, that she hop-
ed to go some place else and raise
capital and come back to the comics
industry — she didn’t want to do a
Spotlight number [see “Spotlight De-
clares Bankruptcy,” Newswalch, Jour-
nal #1261 and stiff people. That Ren-
egade’s still alive is not inconsistent
with what she told me, it’s just that I
got the impression she was closing up.
“Renegade is still a going concern
as far as she’s concerned,’ • Sodaro
said, “just like I consider Agent Un-
known an ongoing project even though
I’m between publishers right now. ”

Sodaro is still working in the business, and so is Barras and Medina.