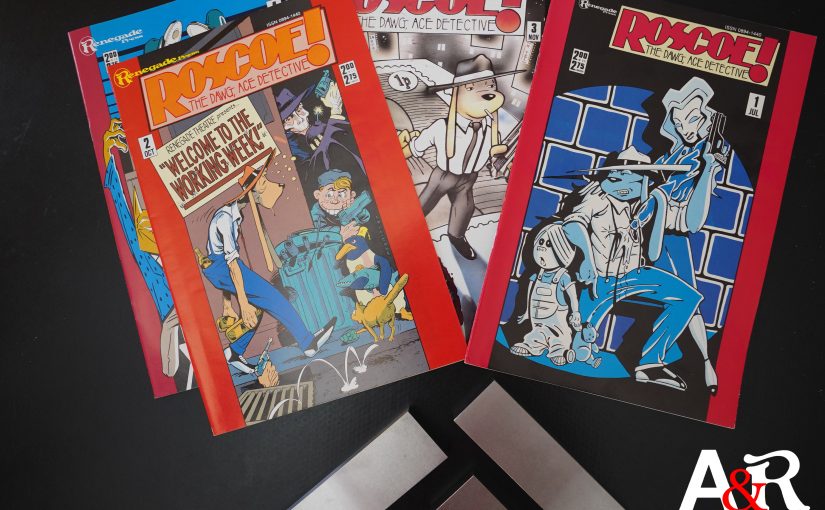 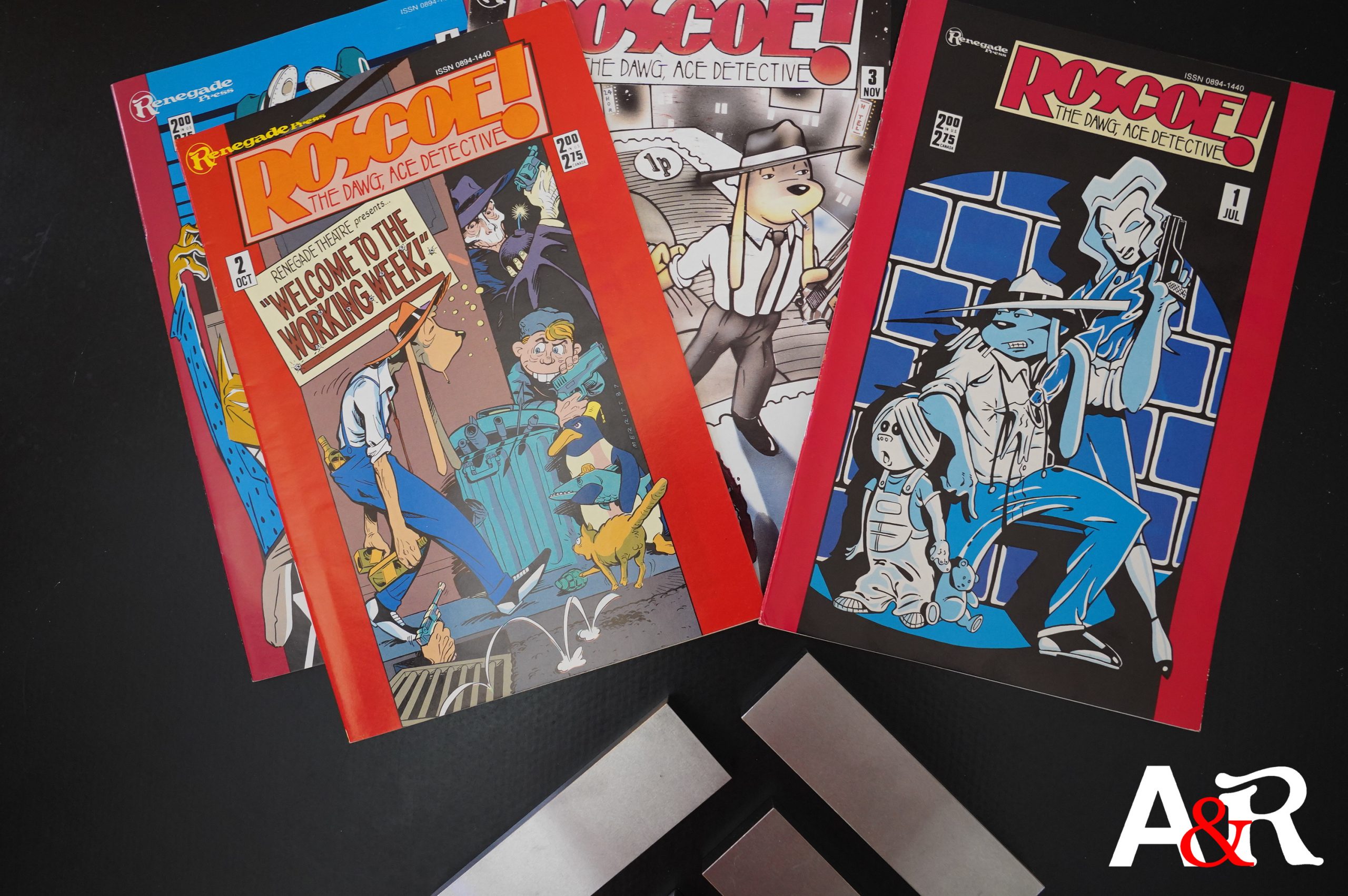 Roscoe! The Dawg had appeared in various issues of Fox — the Australian anthology, but this is his first solo series. Let’s have a look at the first three pages: 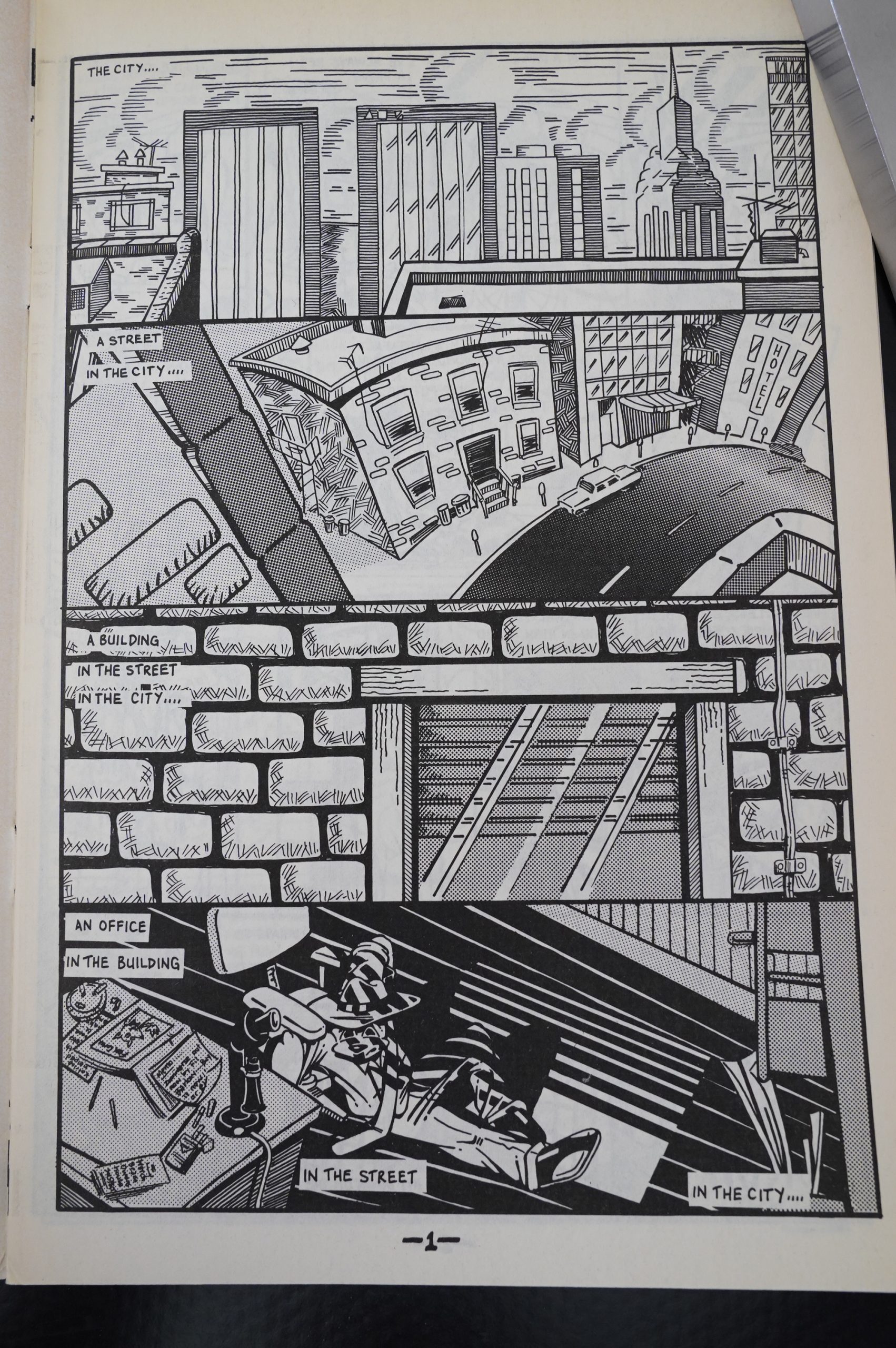 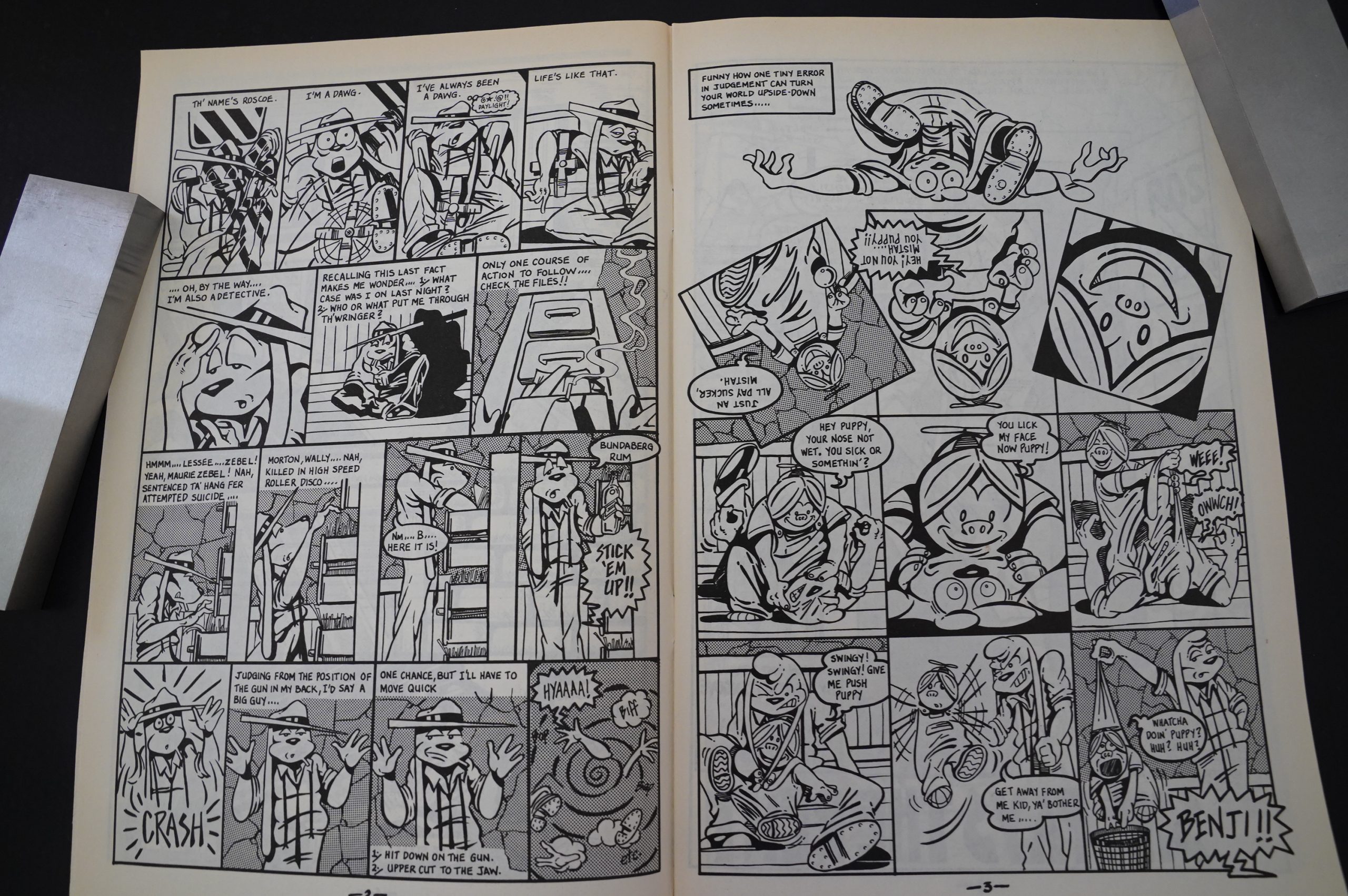 Yes, indeed, we’re in zany noir pastiche territory. I assumed that this was gonna be a funny animal series, but Roscoe! The Dawg is the only animal in the first issue (which is commented upon only by this obnoxious child). 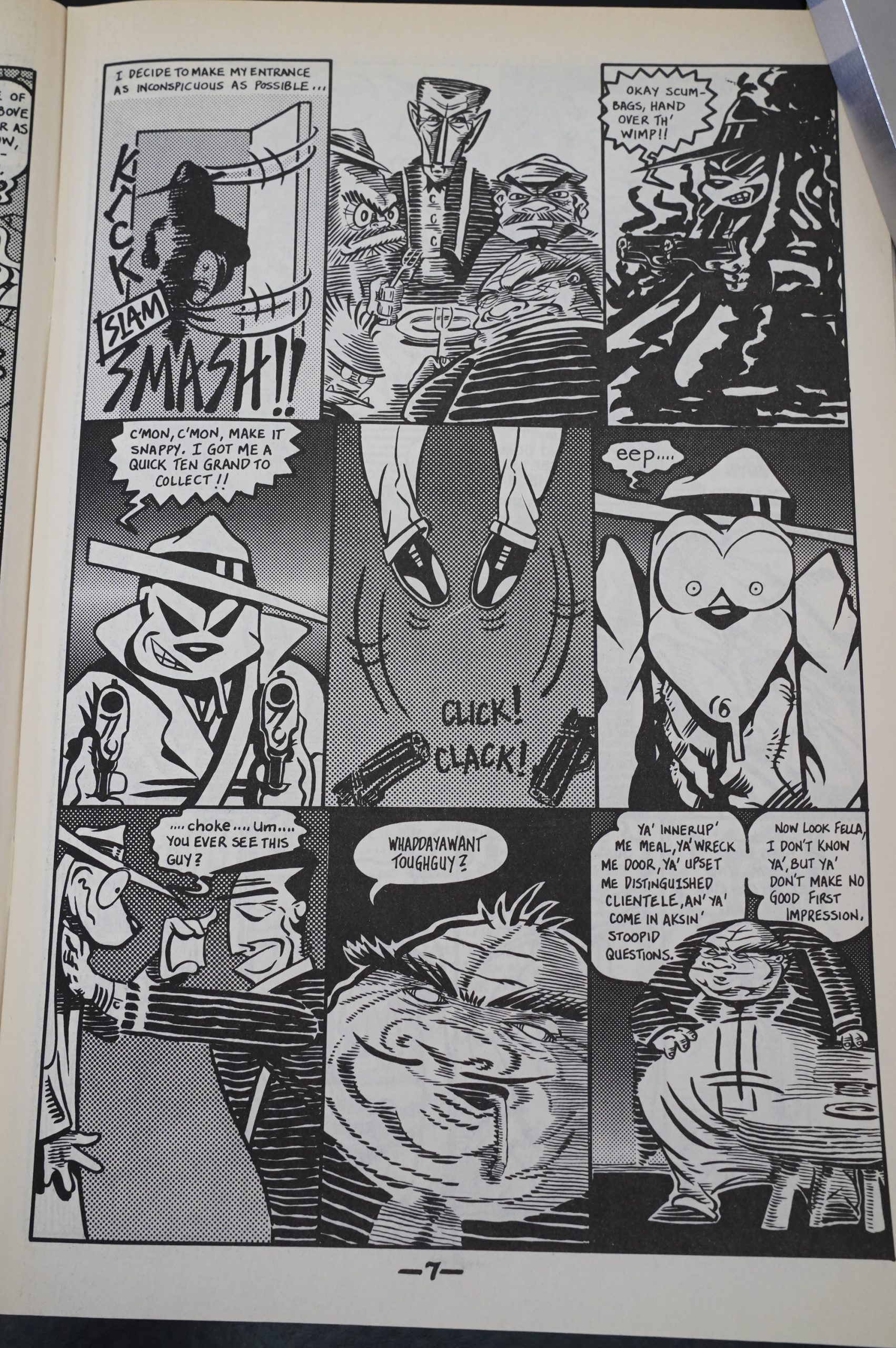 I like how Trengove mikes up the styles a lot, according to what every scene needs. These are very gangsterish gangsters. 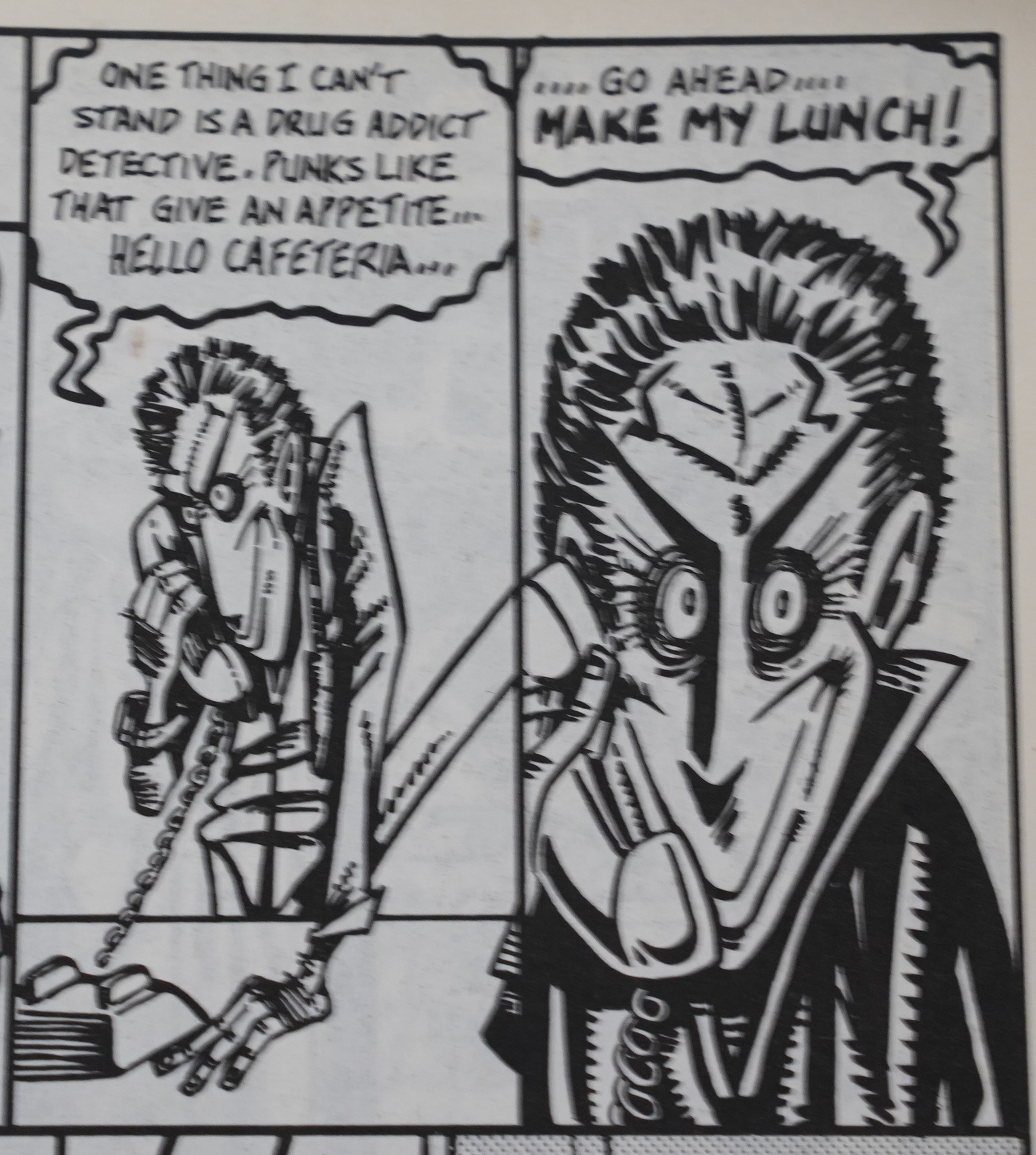 Oops; out of focus… anyway, what I was going to say that… the jokes aren’t all there? The comic has some good things going for it, but neither the plot nor the jokes in the first issue impress. 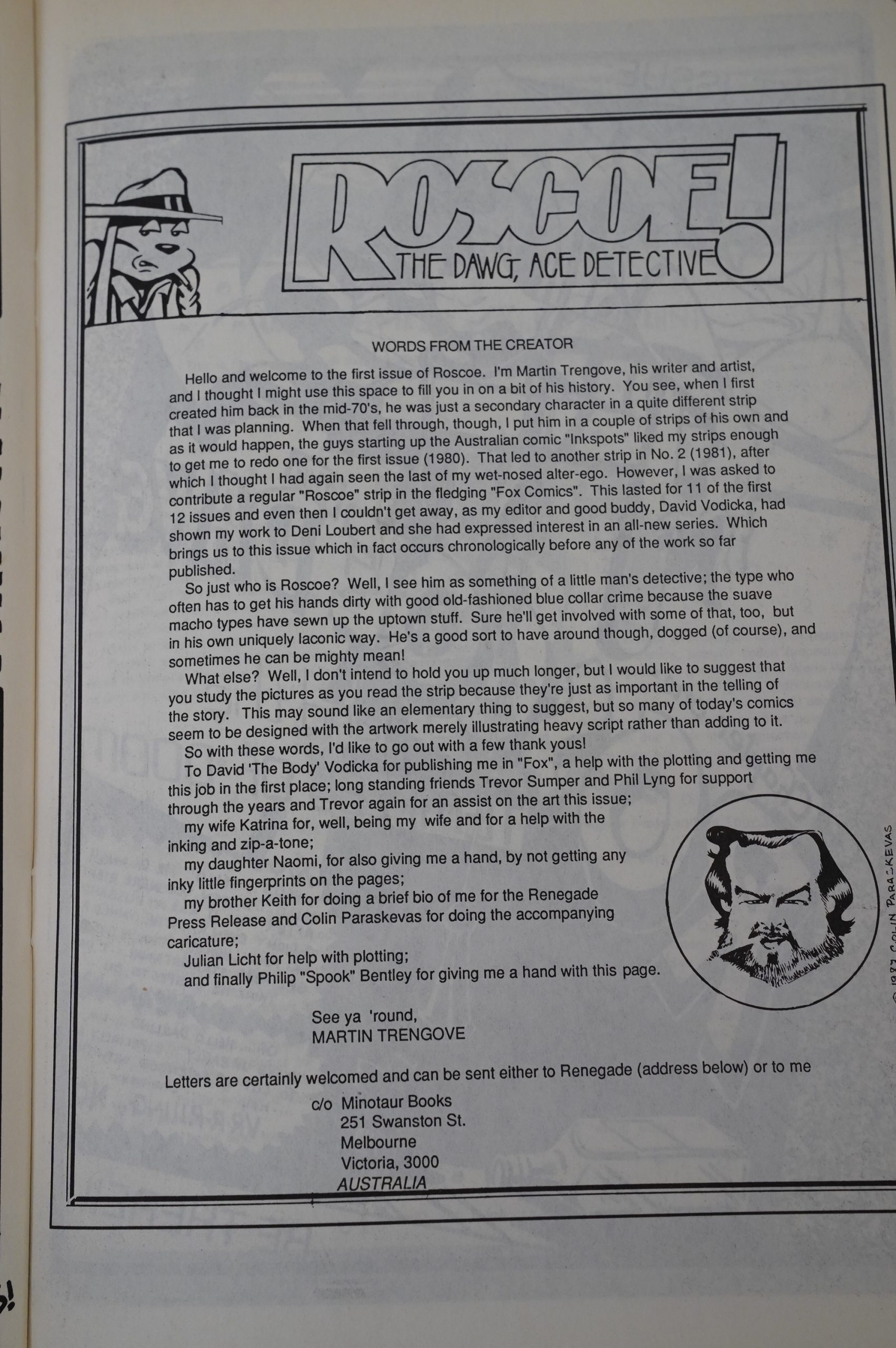 Trengove gives an introduction to the book. 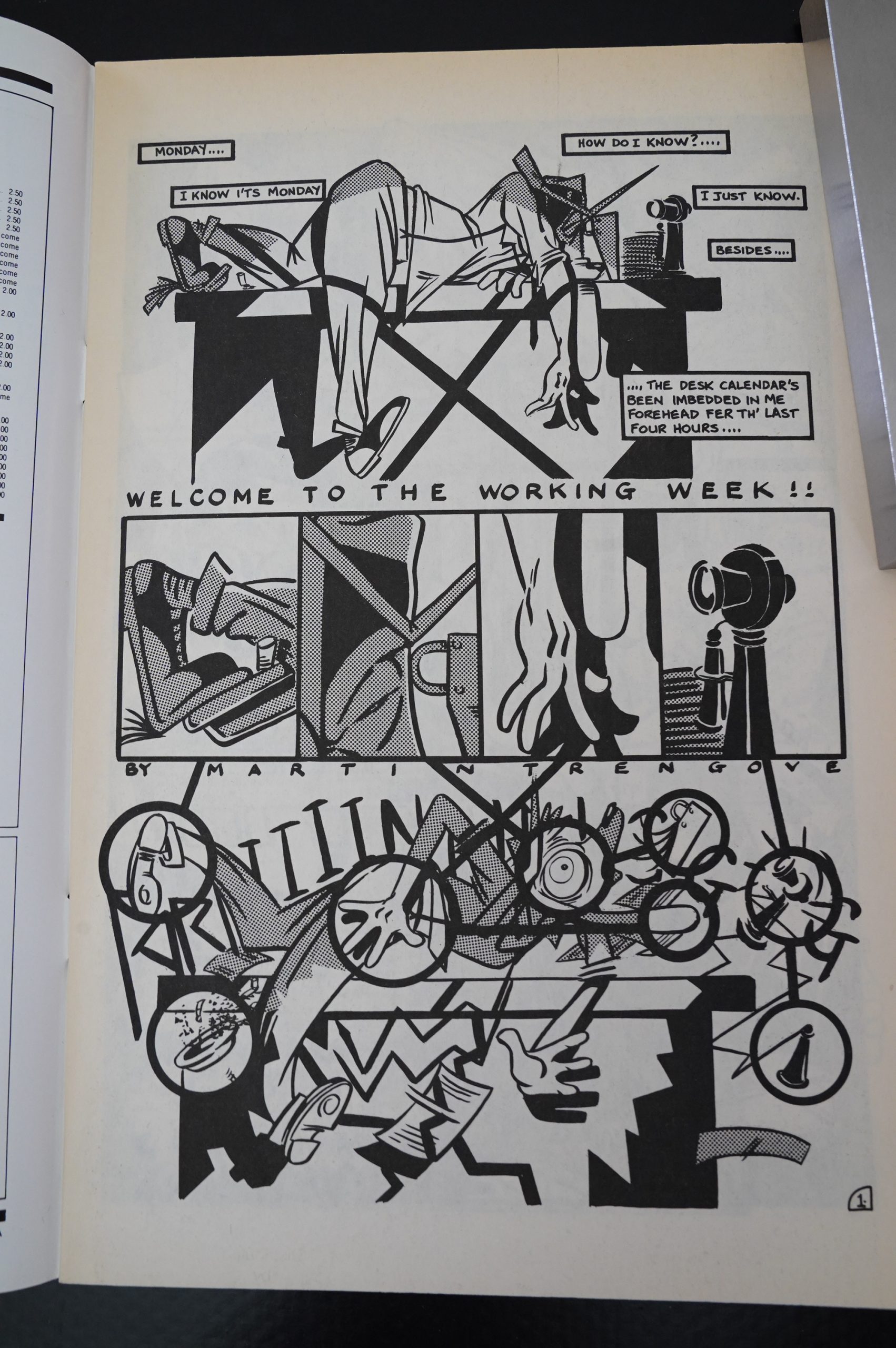 The second issue starts with this page, and… isn’t that kinda fabulous? 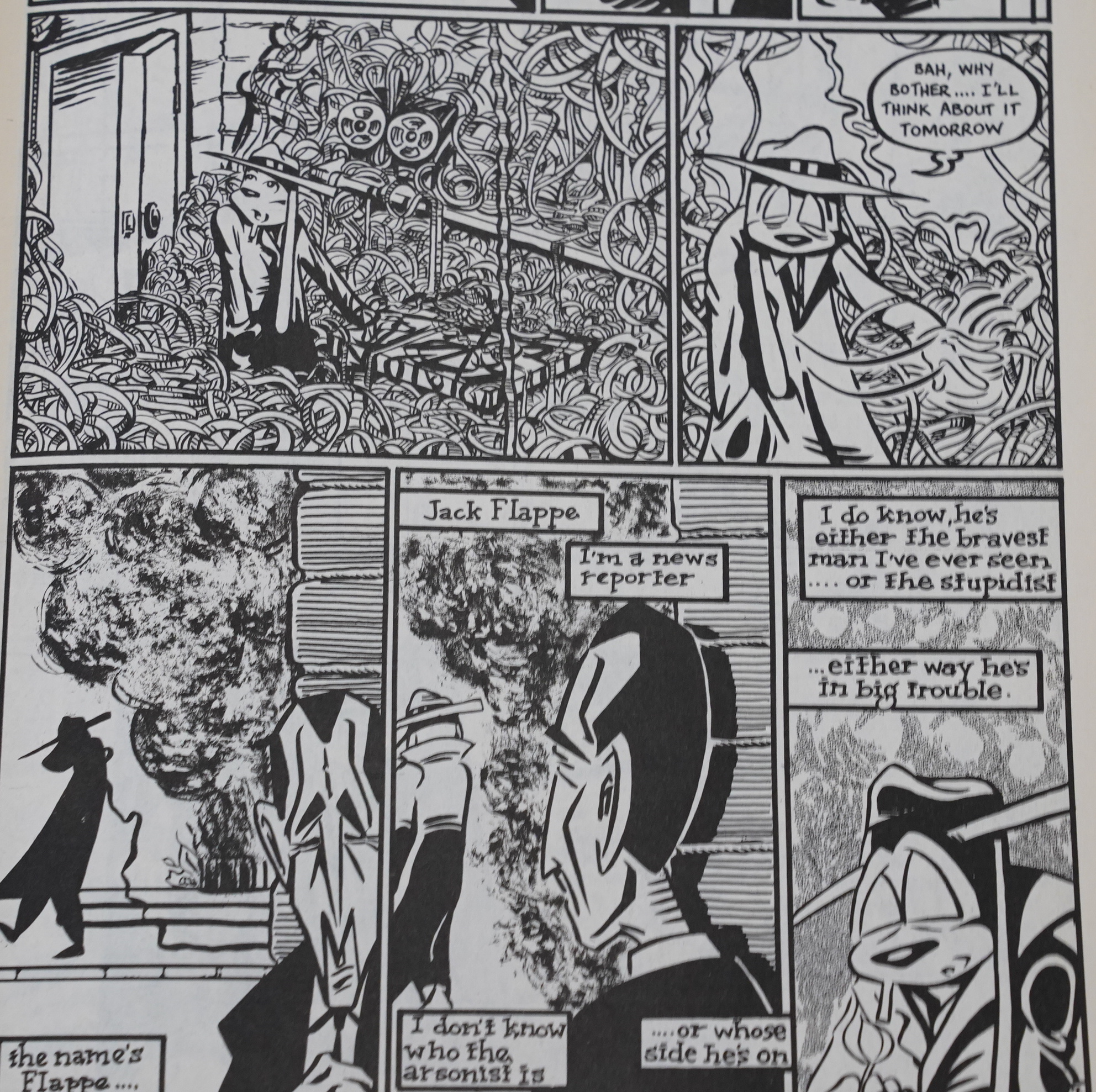 Trengove goes for chaos and non-sequiturs for a lot of the humour… and Roscoe! The Dawg is (it turns out) a total asshole. Which adds to the chaos, because the stories don’t go where you expect them to. But Trengove’s storytelling skills sometimes leave something to be desired: In that those very busy first two panels, it’s not obvious that Roscoe! The Dawg is throwing away his cigarette into that nest of reel-to-real tape… or whether he’s doing so on purpose. 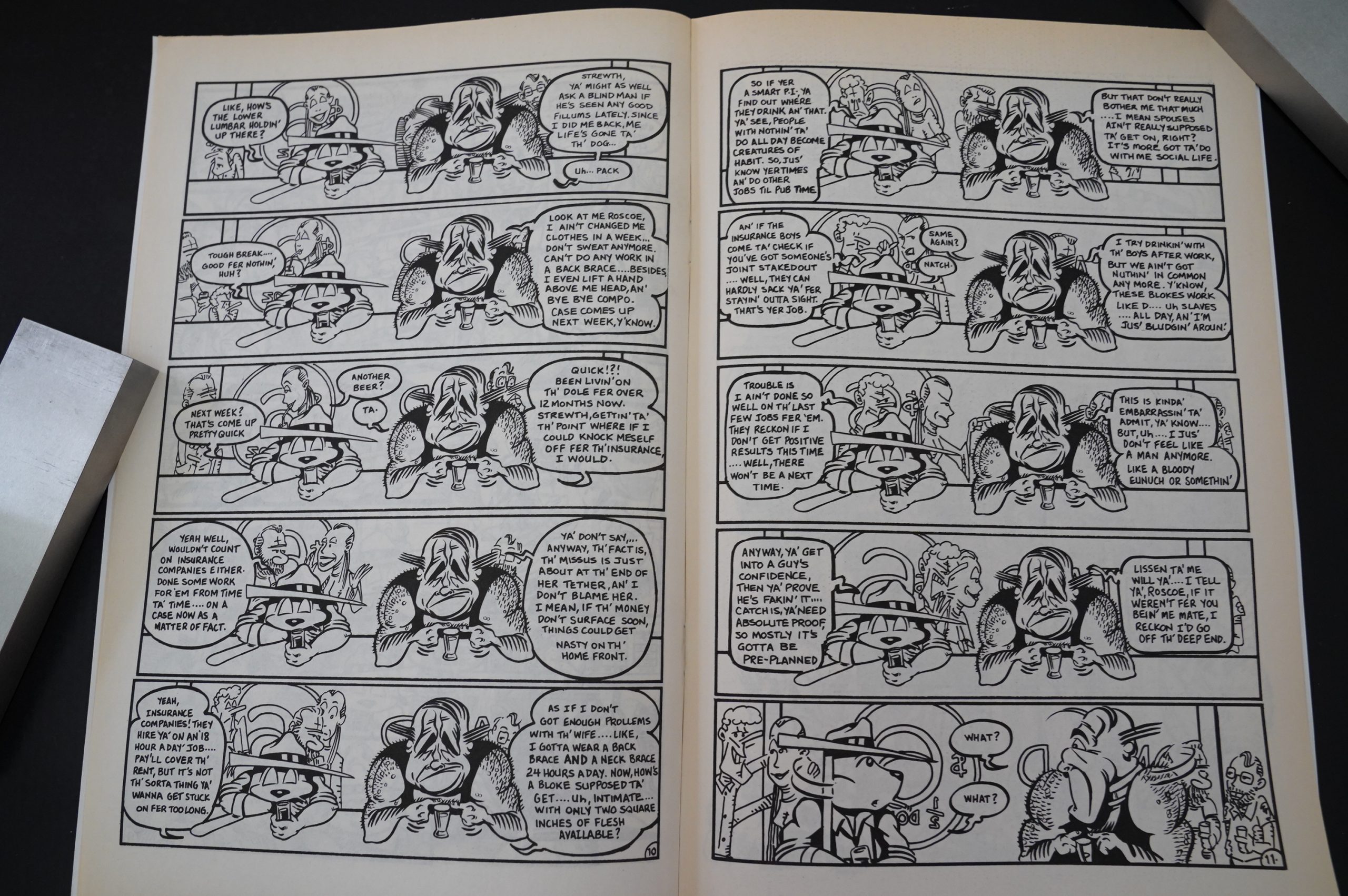 Trengove does have a lot of fun doing this series, though. 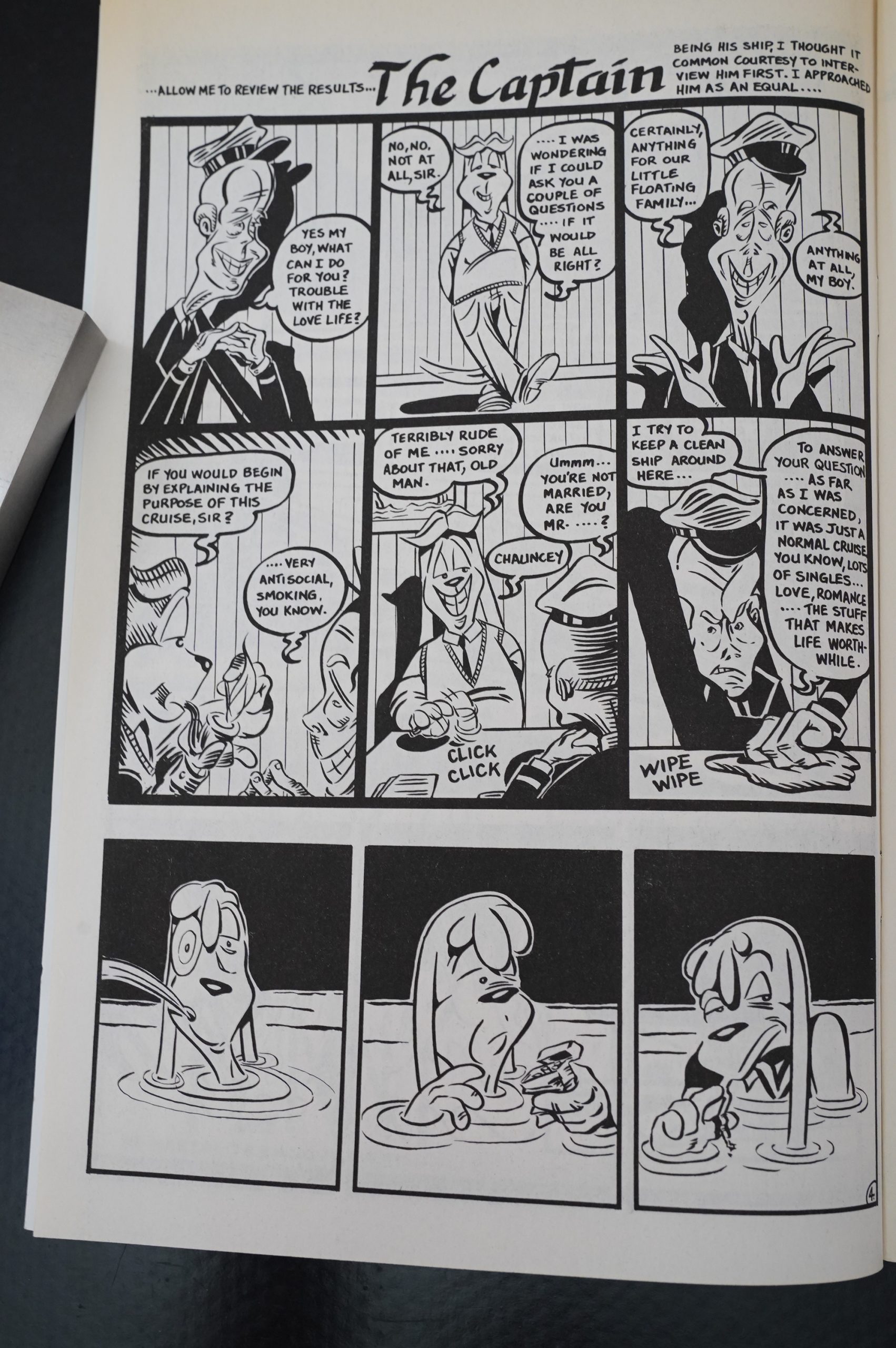 But then! Issue three! It’s got two storylines at the same time — one at the top, featuring a mystery set on a ship, and one on the bottom, which is… er… is that a continuation of the plot from the second issue? It’s not clear, but the boat mystery has both an actual fun mystery plot, a lot of gags (that work) and yet another rendering style. It’s an actual good issue! I’m flabbergasted — it’s great. 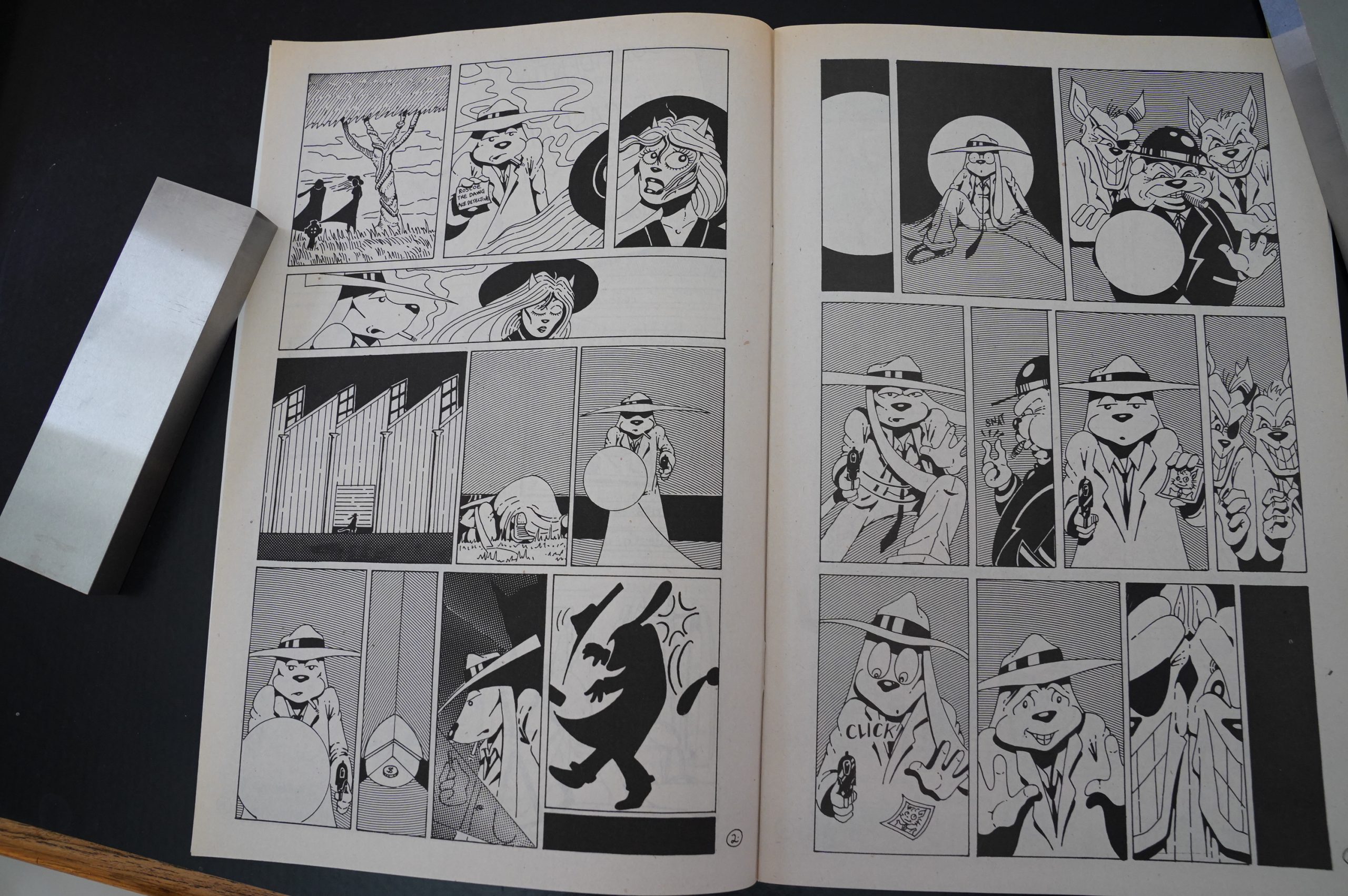 And then… the final issue is a reprinting of older Roscoe! The Dawg shorts, in a variety of styles. The gags work quite well in a shorter format (even if the gag is usually that R!TD is an asshole). 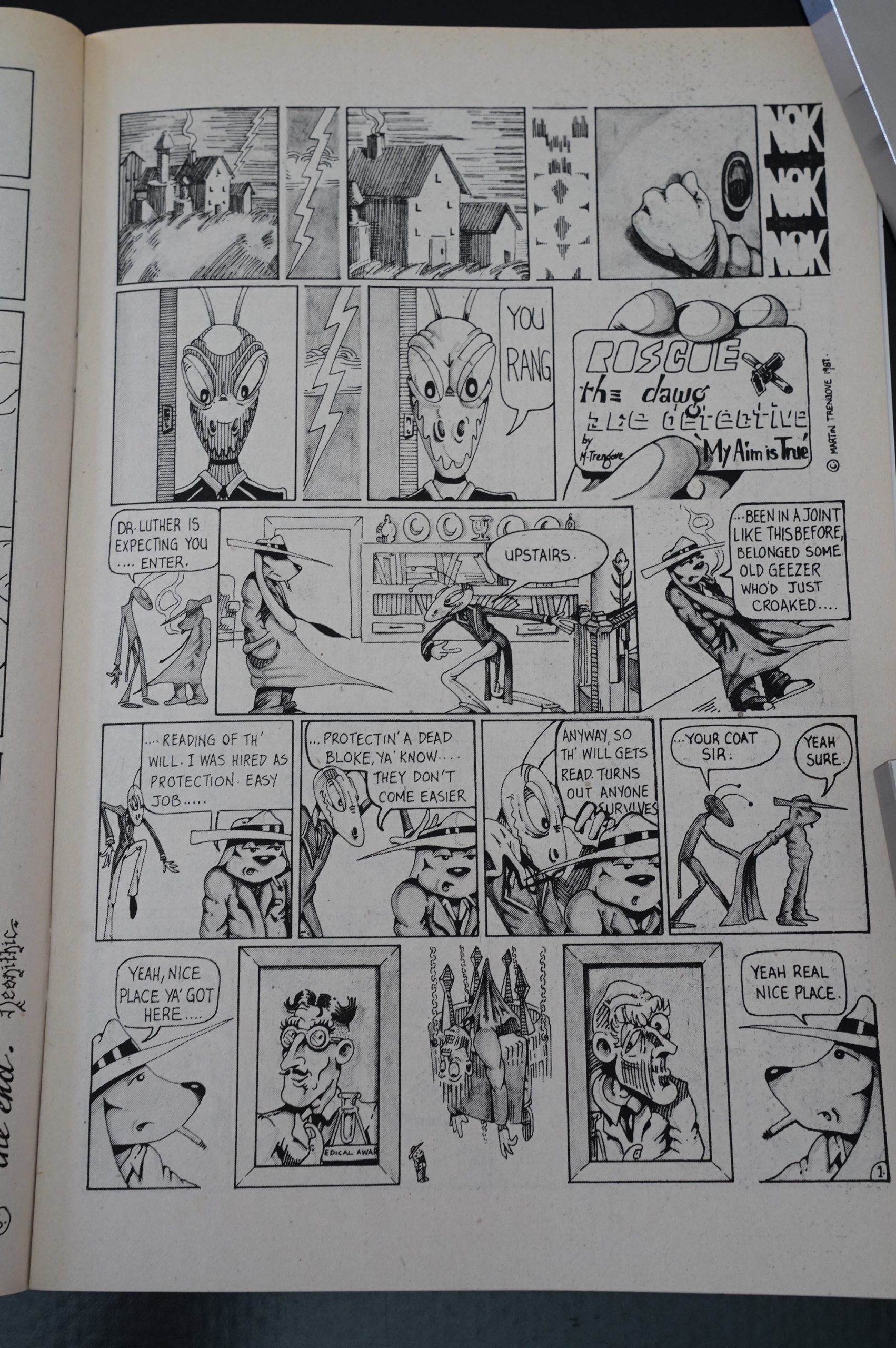 I’m guessing this is a very old piece? 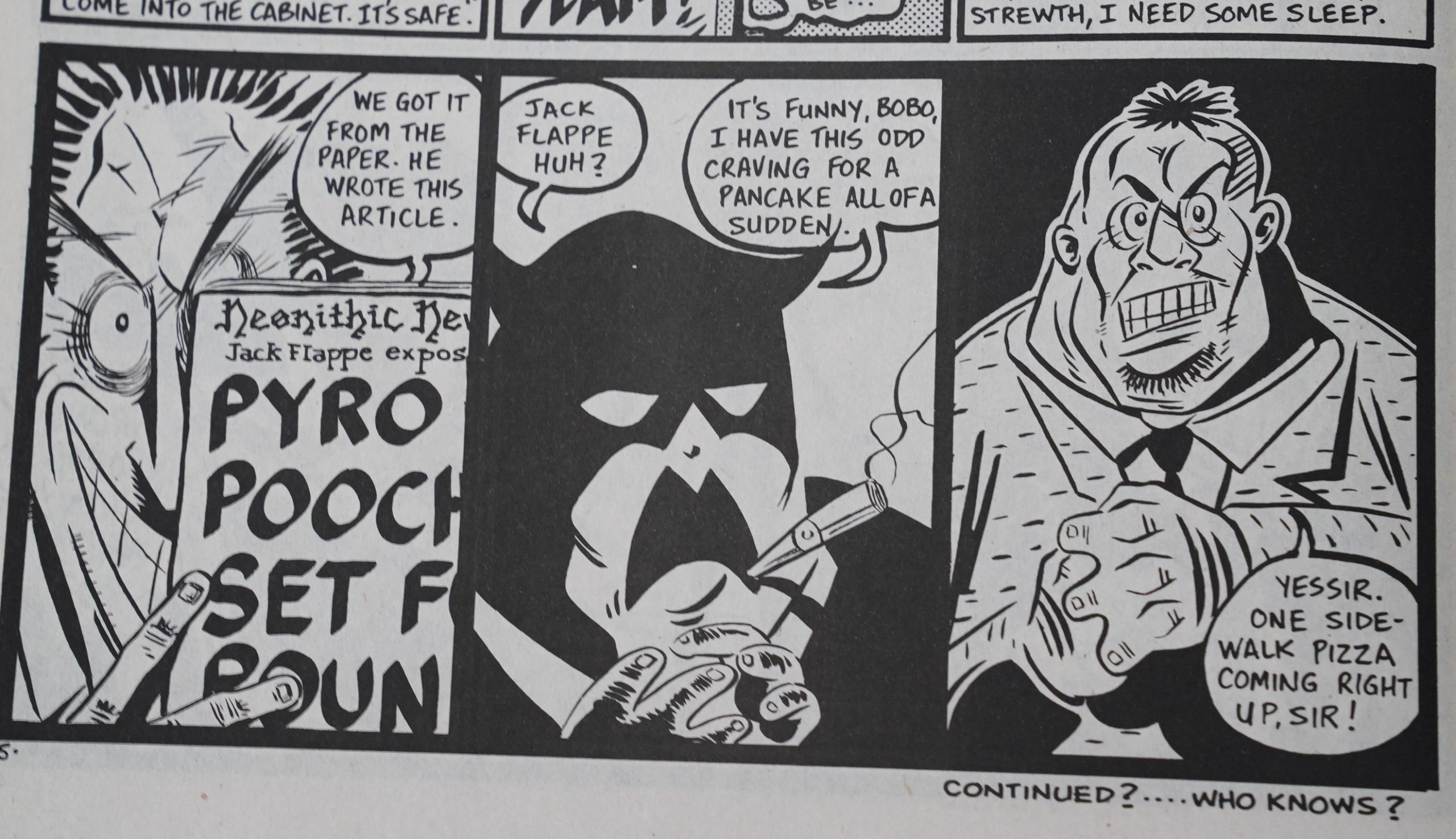 I was starting to wonder whether I was hallucinating that there had been a plot set up in the second issue, but then this … collage … of random panels seem to refer to that stuff. 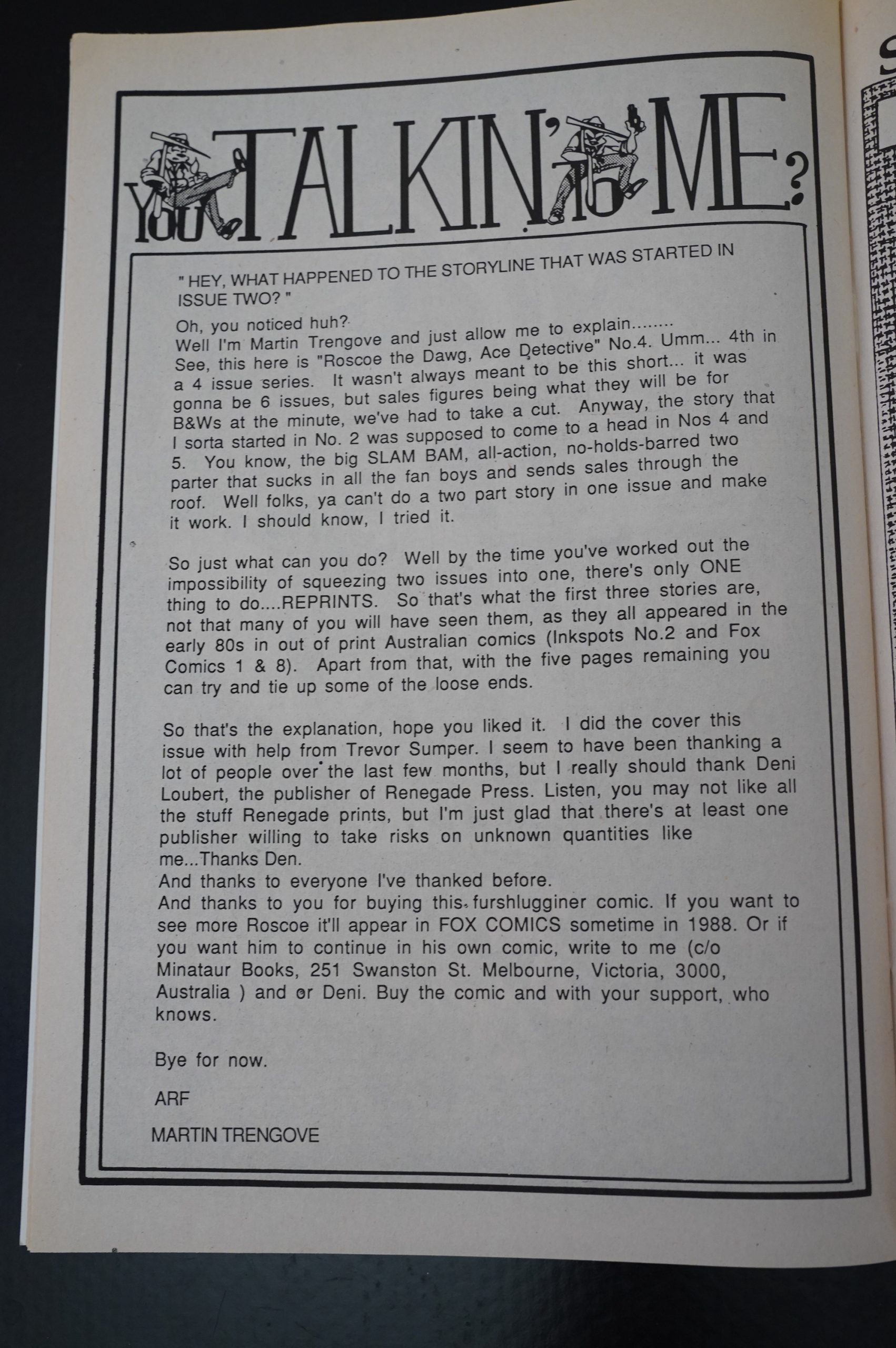 And Trengove clarifies that indeed, there had been a plot, but since the series had been cancelled (due to low sales), he can’t be bothered to finish up that series, and is just doing some reprints instead. SORRY! I totally misread that! He’d planned on wrapping up that storyline in two issues, but since he only had one left, he couldn’t be bothered, so he just ran some reprints instead.

SORRY AGAIN! My fingers keep on writing something he didn’t actually say… so read for yourself. 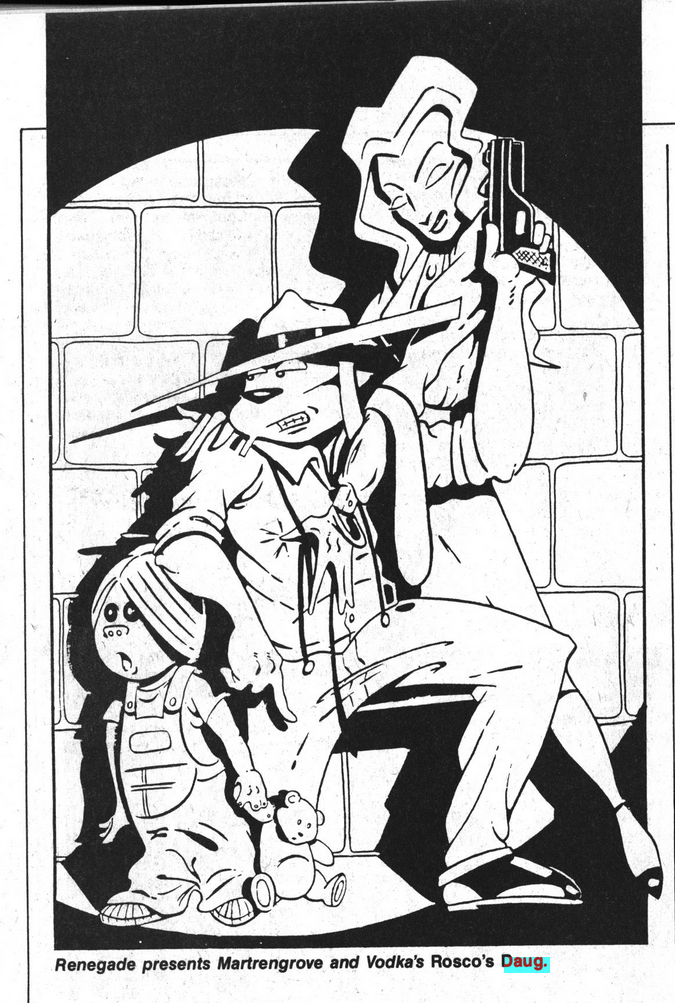 ROSCO’S DAUG
Written by MARTRENGROVE; illustrated by
‘ DAVID VODKA; edited by DENI LOUBERT
24 pages; $2.00; bi.monthly from RENEGADE
PRESS
Imported from Australia (where it was
published by Fox Comics), this series
witl reprint the strip of the same name
for the first time in the US. “The series
is really very visually interesting,” says
editor Deni Loubert. The main character
thinks that he is Bogart, but he really
isn’t. From there is where the fun starts.
While Loubert has a verbal
commitment from the other parties
involved, thetontracts had not been
signed when#is preview was given.
Thus, barring any unforeseen circum-
stances. the. book will appear from
Renegade in the US. in June. —RJS–

Okay, now from here we move on-
to the one and only:
Roscoe the Dawg
Which somehow appeared under
the title “Rosco’s Daug.” Now I’m
not too sure what a “Daug” is. but
I can assure you Roscoe doesn’t own
one. He is, in fact, a dog, or as you
might say: “a dawg.” Following that
the credits read as follows: Creator,
scripter and artist—MARTIN
TRENGROVE (not Martrengove):
Co-P10tter—DAVID VODICKA
(not Vodka, although we all got a
good laugh from this one).
If you want to get technical, too,
the comics are not “imported” from
here since it will be a Renegade title
printing all new strips. Roscoe has
previously appeared out here in Fox
Comics, but these were different
stories. It is, at least, a funny animal
book of sorts (though there are also
“funny humans”).
So there you have the ugly truth.
Of course I realize that it’s of no
great importance since rightly or
wrongly spelt, these guys aren’t
going to mean much to your average
punter, but I’d hate to think someone
out there was going to go through
life thinking that we had some kind
of a stnall furry animal out here
called a “Daug.” Moreover, I’m well
aware that in part this confusion
emanates from the respective Amer-
ican editors, on whom I have been
exceptionally lenient just in case you
happen to print this.

A couple Of titles due out in July
deserve mention. I’ve had an
advance look at both Roscoe the
Dawg and Mechthings, and was
impressed with both. Roscoe, by
Martin Trengove, is a very funny
trip through Hammett/Chandler
territory in anthoropomorphic
drag. Trengove’s angular cartoon-
ing has a hell Of a lot Of zip, and
evokes the requisite film noir ambi-
ance without sacrificing silliness.

I can’t find any discussion of the series on the intertubes, and as far as I can tell, it has never been reprinted.