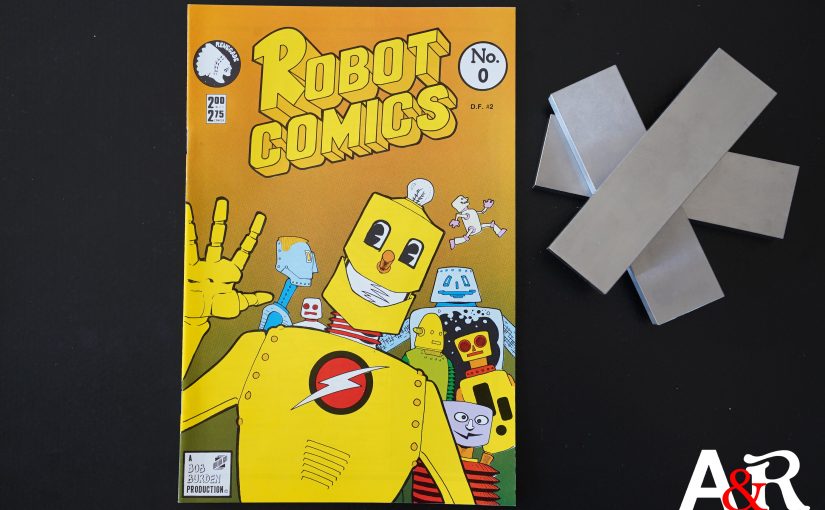 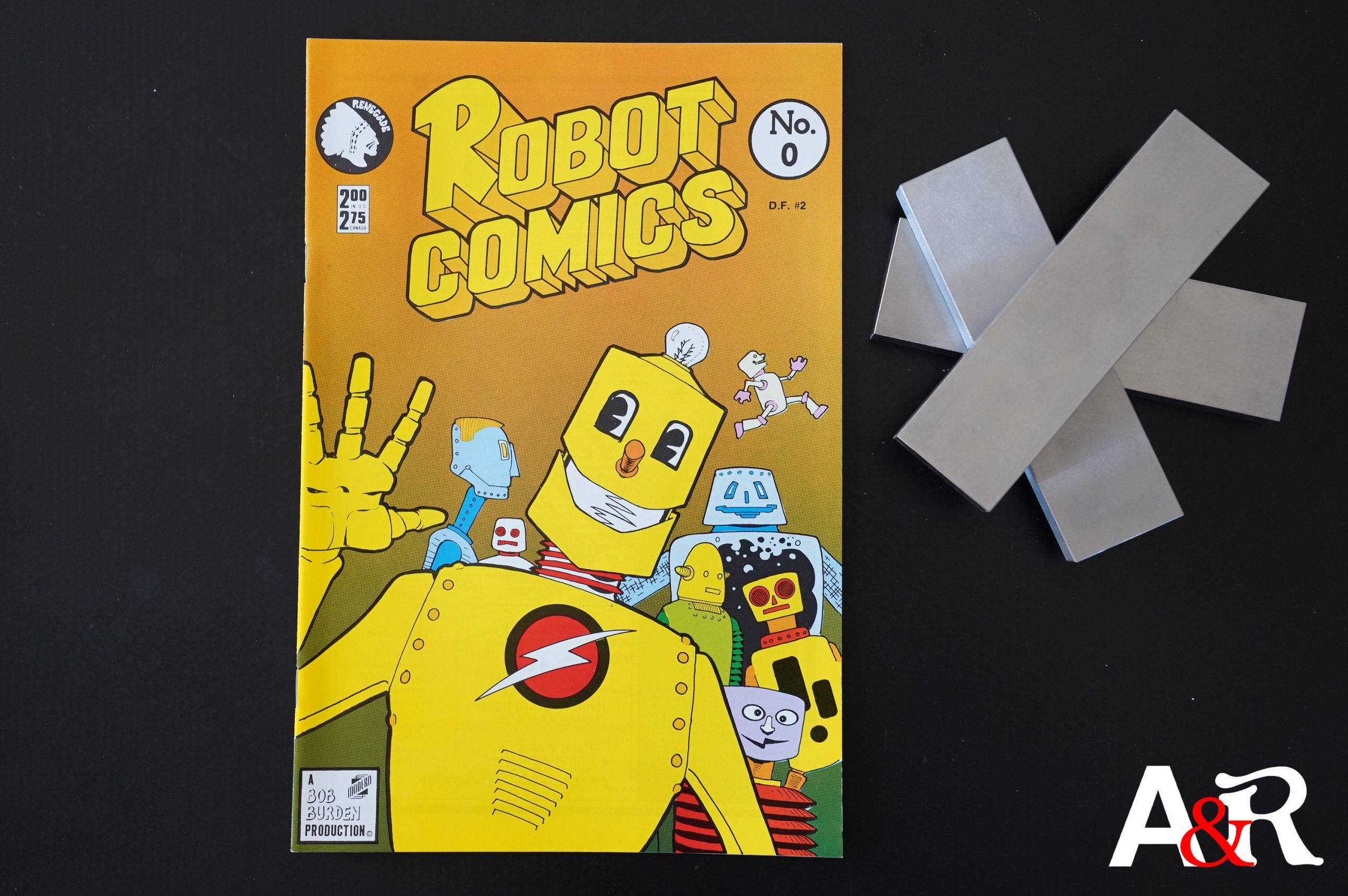 Burden is, of course, most famous for the Flaming Carrot series, also published by Renegade. 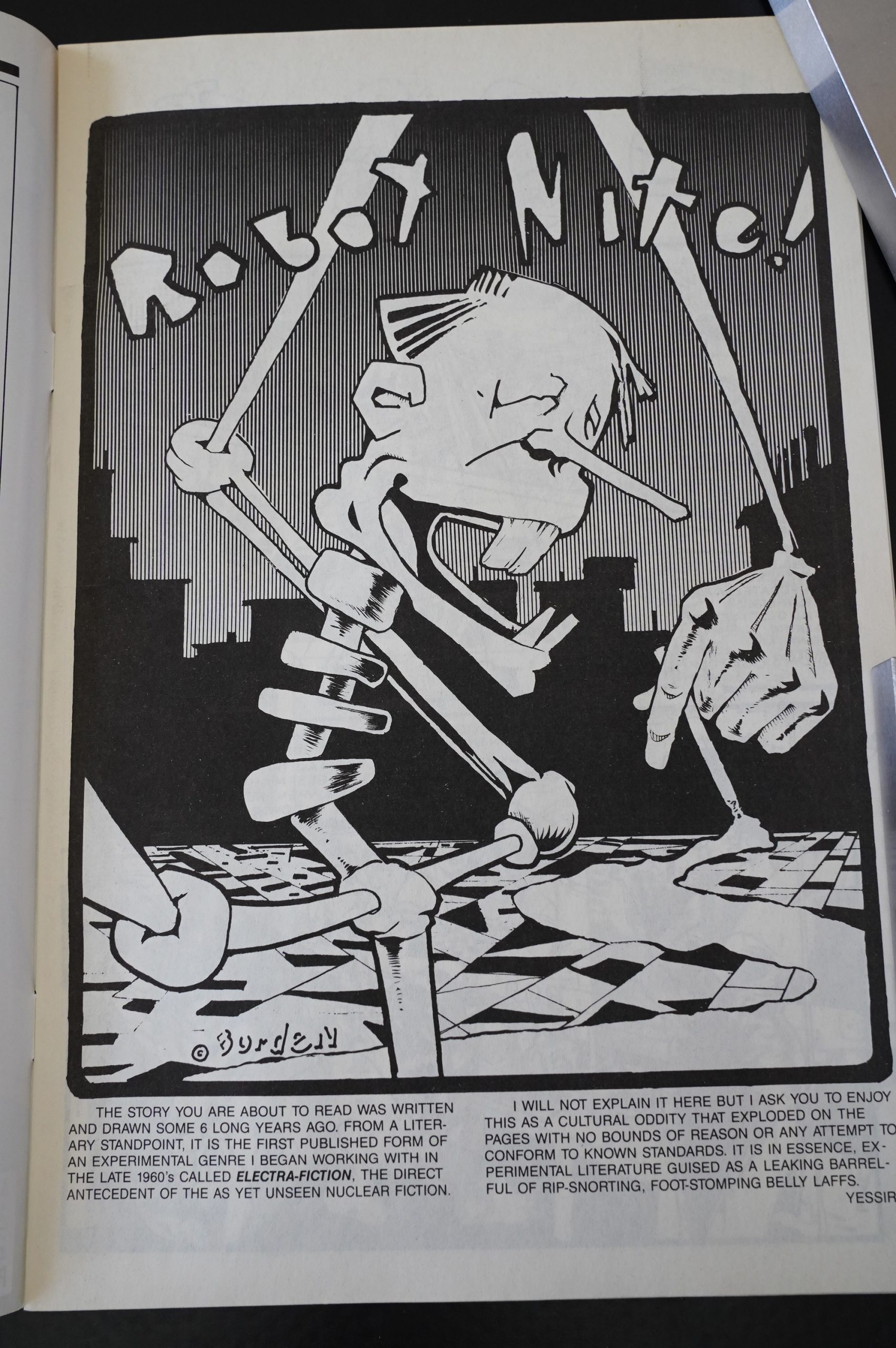 This is apparently a reprinting of a comic Burden had done in 1981. “Elecra-Fiction” is the name of the genre. Let’s read the opening spread: 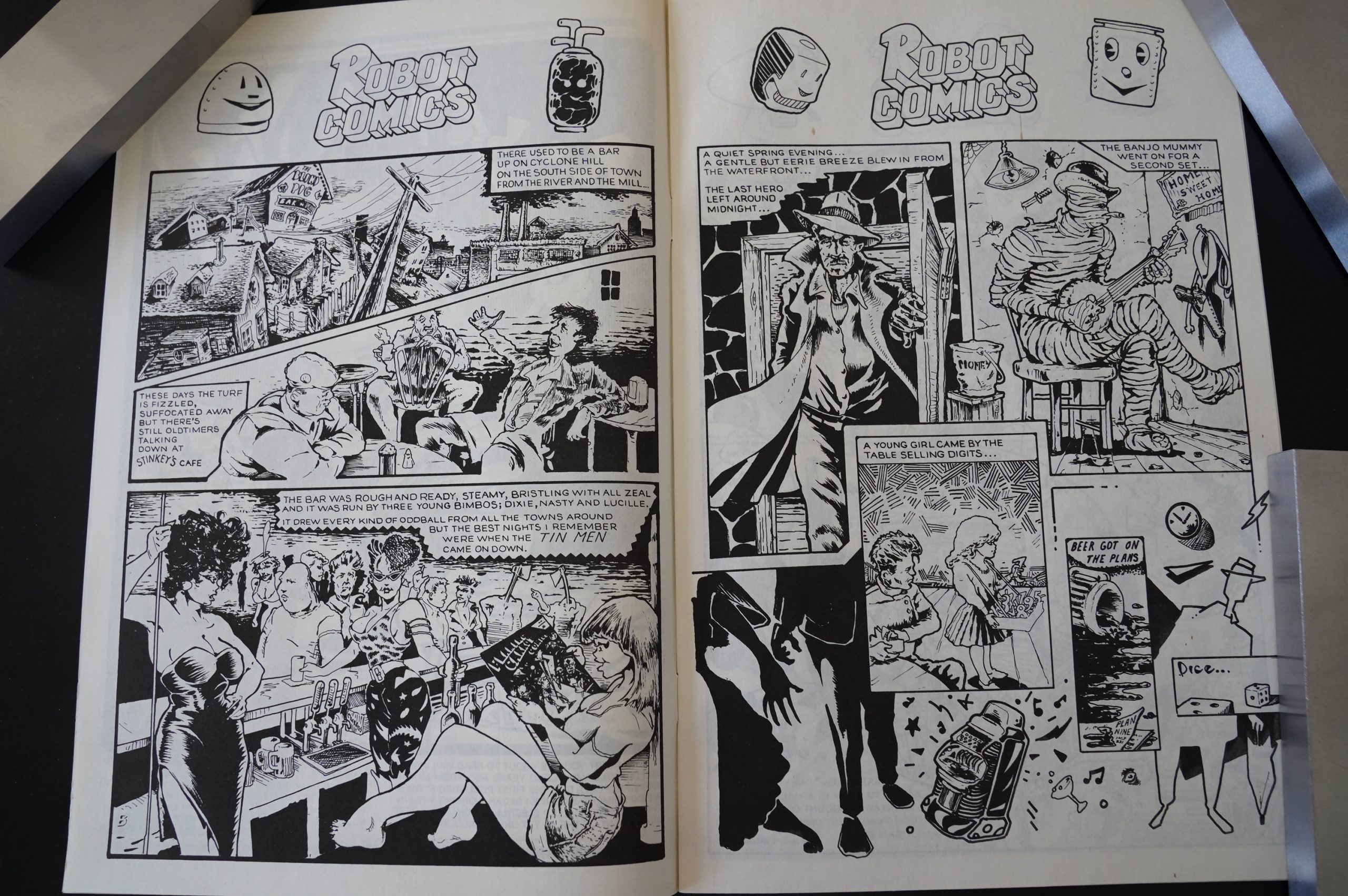 OK, so it’s prime Burden lunacy. The entire issue is just one big fight scene in this bar, which gives Burden room to come up with a joke in just about every panel. 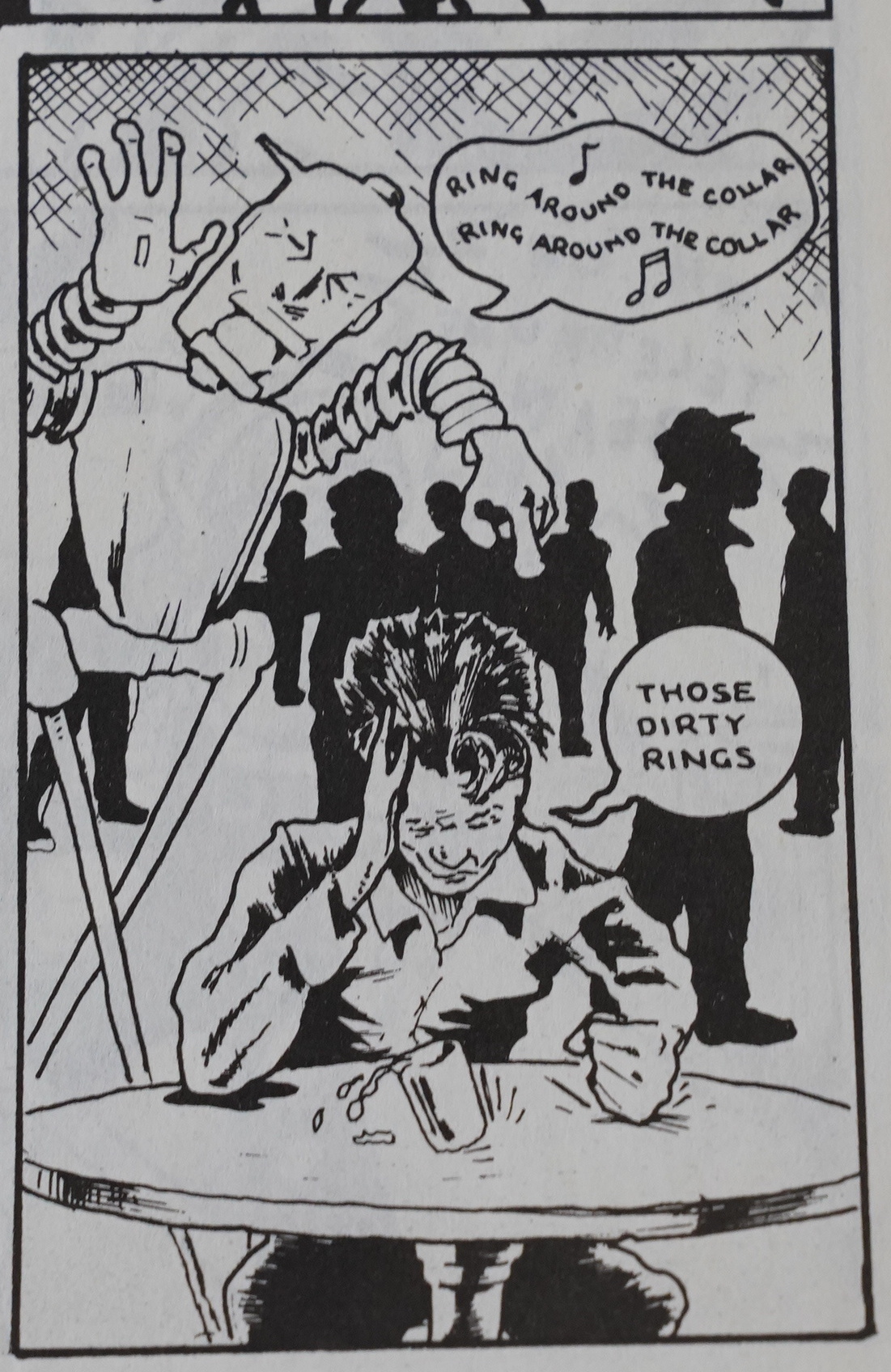 That one made me laugh out loud, for some reason. 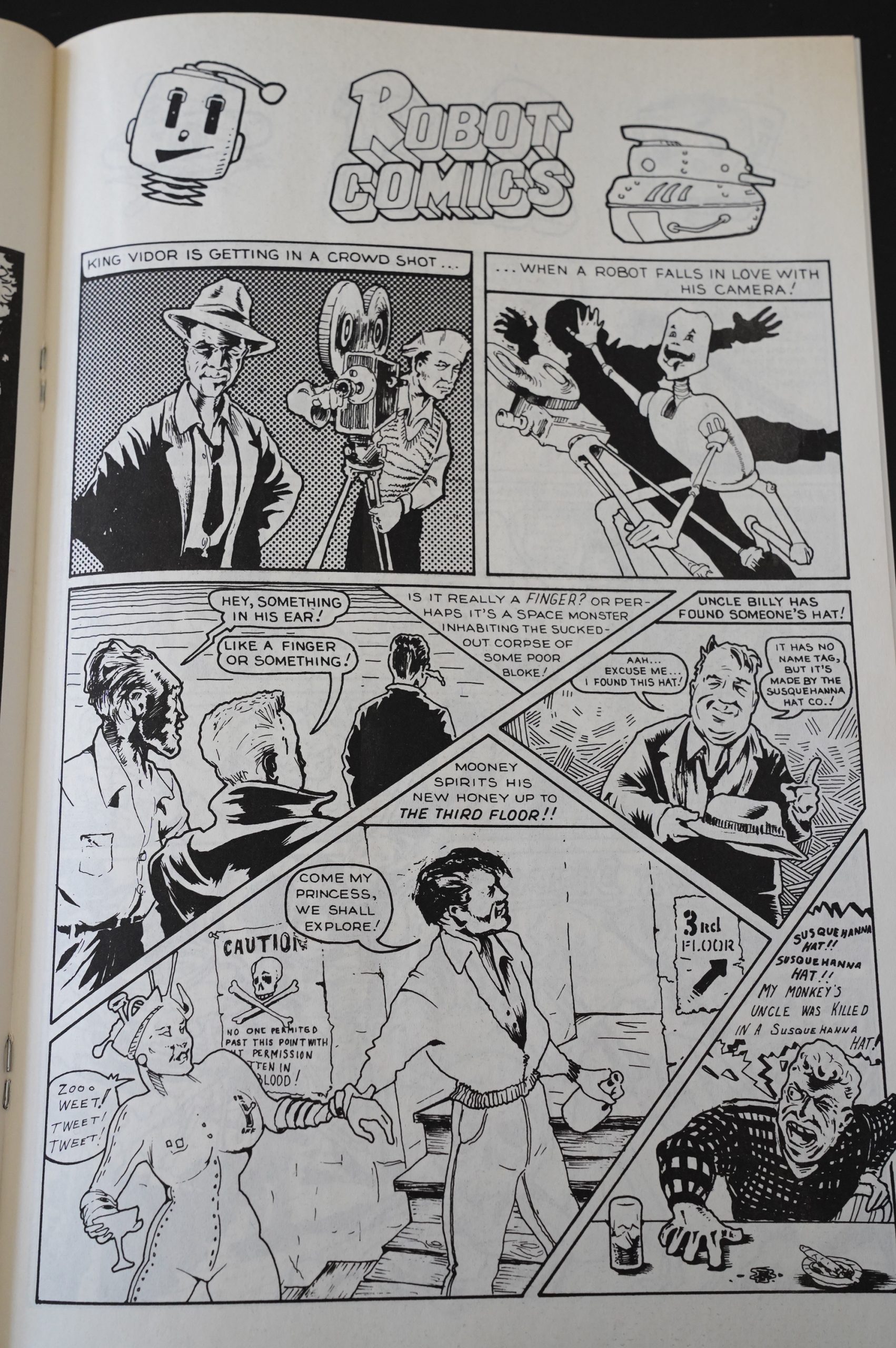 It’s very funny! I also like how the general lunacy is also reflected in the layouts… and Burden’s unique rendering has probably never looked as good as here? 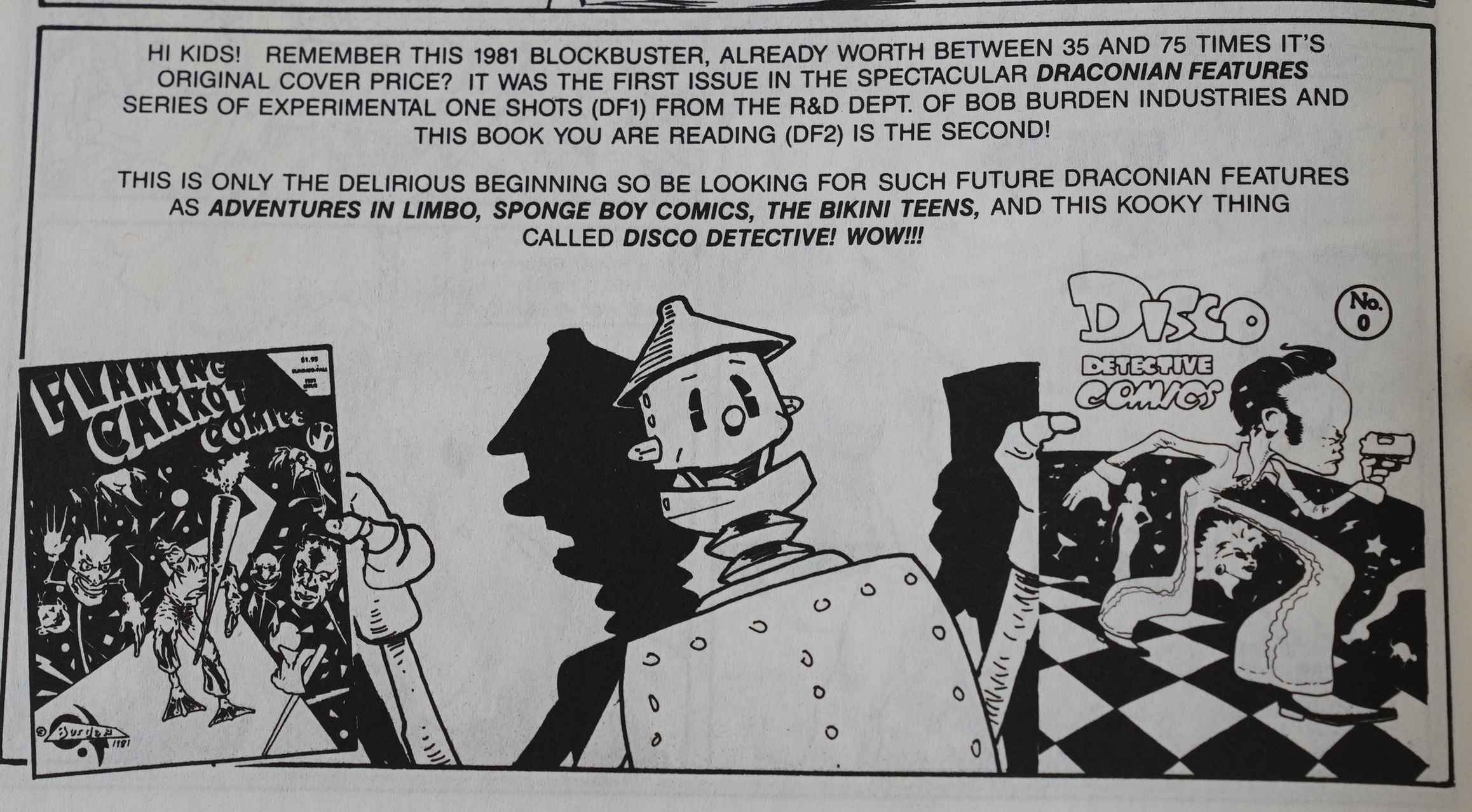 Burden saw his early comics as being part of a series: Draconian Features, and Flaming Carrot was the first one, Robot Comics was #2, and there was supposed to be a Sponge Boy Comics and a Disco Detective. According to comics.org, these comics never happened.

Robot Comics #0 is a new one-shot
written and drawn by BOB BUR-
DEN, featuring a single story,
“Robot Nite,” in which robots swing
and bop, among other things.
Premiering in June, it’s part’ of
Burden’s new “Draconian Features
Zero” series, each issue of which
will have a different title and be
numbered A). The original naming
Carrot #1 published by Burden’s
Killian Barracks Press is now retrcy
actively being considered as the first
“DFZ” issue, and should therefore
technically be considered as Ham-
ing Carrot #0 ‘even though, as
“it says #1 on the
Burden notes,
cover.” Robot Comics is thus
Draconian Features Zero #2, etc.
Asked to explain why “Draconian
Features,” Burden explained: “The
whole concept of draconianism is
this: out of a draconian measure is
born a society. Out of harsh laws is
where civilations and peach comes
from.”

DEPPEY: There was a manic weirdness to Robot Comics, which you did
With Renegade —
BURDEN: — which was almost kind of like a rock video. I did that
thing, and that was a big turning point with me. It was experimental.
I wanted to see how far I could go without a story, just making it up
as I went along. I had just done Flaming Carrot #1, which was an
attempt to carry a full issue and a longer storywith the character. The
first three episodes of Flaming Carrot were little eight-page vignettes,
hit-and-run.
With the oversized No. 1 1 did in 1981, it was a full-fledged sto-
ry. and it turned out pretty well — it had a wrap-up at the ending and
everything like that. But there were some problems with it. When we
premiered it at the Atlanta convention, I didn’t get the bang I expect-
ed. So I said, “l can do something better than this.” So, I sat down
and I started really going nuts with Robot Comics. I knocked that
thing out the very night I got home from the convention — that very
Sundaynightand I started working on the “Robot Nite” story. I just
went to town with it. The issue just started flying out of my mind and
I just started puttingdown on the page. This was like 1981. It didn’t
getpublished till years later. The original artis now dog-eared and
worn. I used to carry the art around in my car and show it to people
and go, “Isn’t this weird? Look at this crazy thing I did. I mean this is
the craziest thing.”
DEPPEY: It does read as though you were making up the Story panel-by-
panel as you went.
BURDEN: And it has sort of a faux-ending; it’s got an ending, but it’s
more ofan epilogue more than a real ending.

I was pleased to discover that
Renegade had published Robot Com-
ics K). Burden’s Flaming Carrol Com-
ics has developed a following during
its run as a Renegade comic—and
many issues have presented Burden’s
zonked•out sensibility in its purest
form. Burden is an adventurous talent,
though it’s never been exactly clear
how he would use and develop his
talent within the parameter Of the
comic book industry. Robot Comics
reveals the early Burden at his most
audacious and experimental—an un-
bridled anarchist generating his own
brand of dad havoc—while Comico’s
Gumby •s Summer Fun Special shows
Burden adapting and using his skills
to engineer a pleasant return to the
dream world of childhood fantasy.

Robot Comics is a surrealist vi-
Sion of barroom Americana. a succes-
Sion of bizarre, unrelated images that
flow with the internal illogic ofa dada
poet’s dream. Item: during the height
of the festivities, one panel features
Orson Welles in his Harry Lime get-
up from The Third Man passing a tat-
tered package to the “banjo mummy.”
while the next has “Uncle Billy”—
who, moments earlier, put a pie crust
on his head and declared himself “The
Ghost of Christmas presents”—now
playing “meatloaf football” with the
robots who have invaded the premises.
The anti-story reaches a climax
when, among Other things, a “space
monster/super cancer” invades the
body of a robot and electrocutes itself
and a probate lawyer is “hung from
the rafters following an ad hoc
plebiscite.” This comic book}dada
poem concludes with an image that is
a fittingly macabre apotheosis of all
that precedes it. At sunrise, figures
“bury the dead (and some of the
wounded)” on the grounds of the
Dixie Twi-Life drive-in movie. It’s an
eerie, apt, funny, nonsense conclu-
sion: America’s lowbrow pop culture
dreams begin and end at the drive-in.