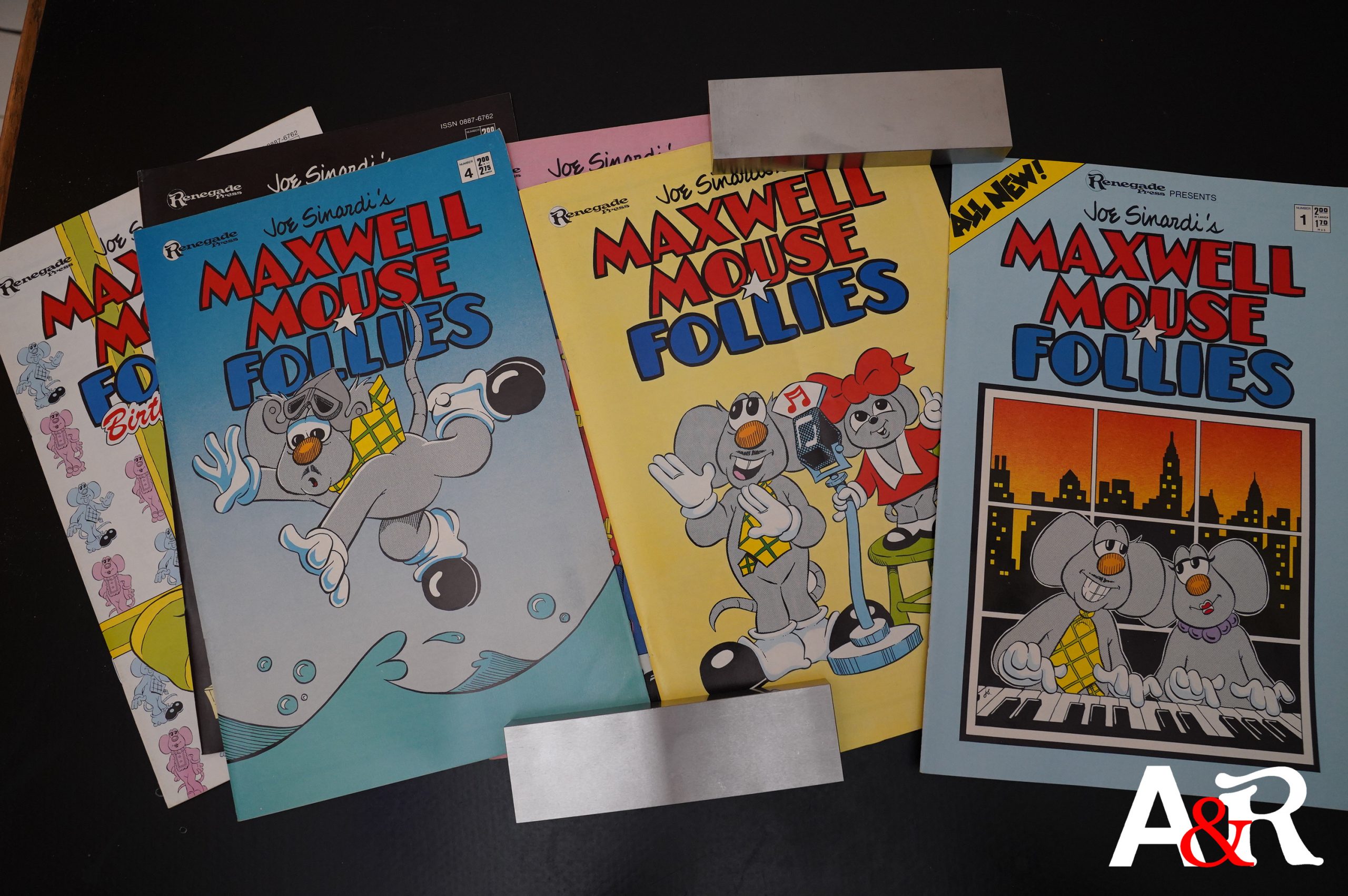 We’re now in the Black and White boom period of the US comics market — patient zero, Adolescent Radioactive Black Belt Hamsters #1, had been released and had shown that people desperate for the next Teenage Mutant etc Turtles would snap up any #1, as long as it’s black and white.

I’ve seen nothing to indicate that Deni Loubert had that in mind when expanding the Renegade line-up, though, but it explains how these oddball titles Renegade were publishing in 1986 (and the first half of 87) had sales sufficient to keep them going for a while. 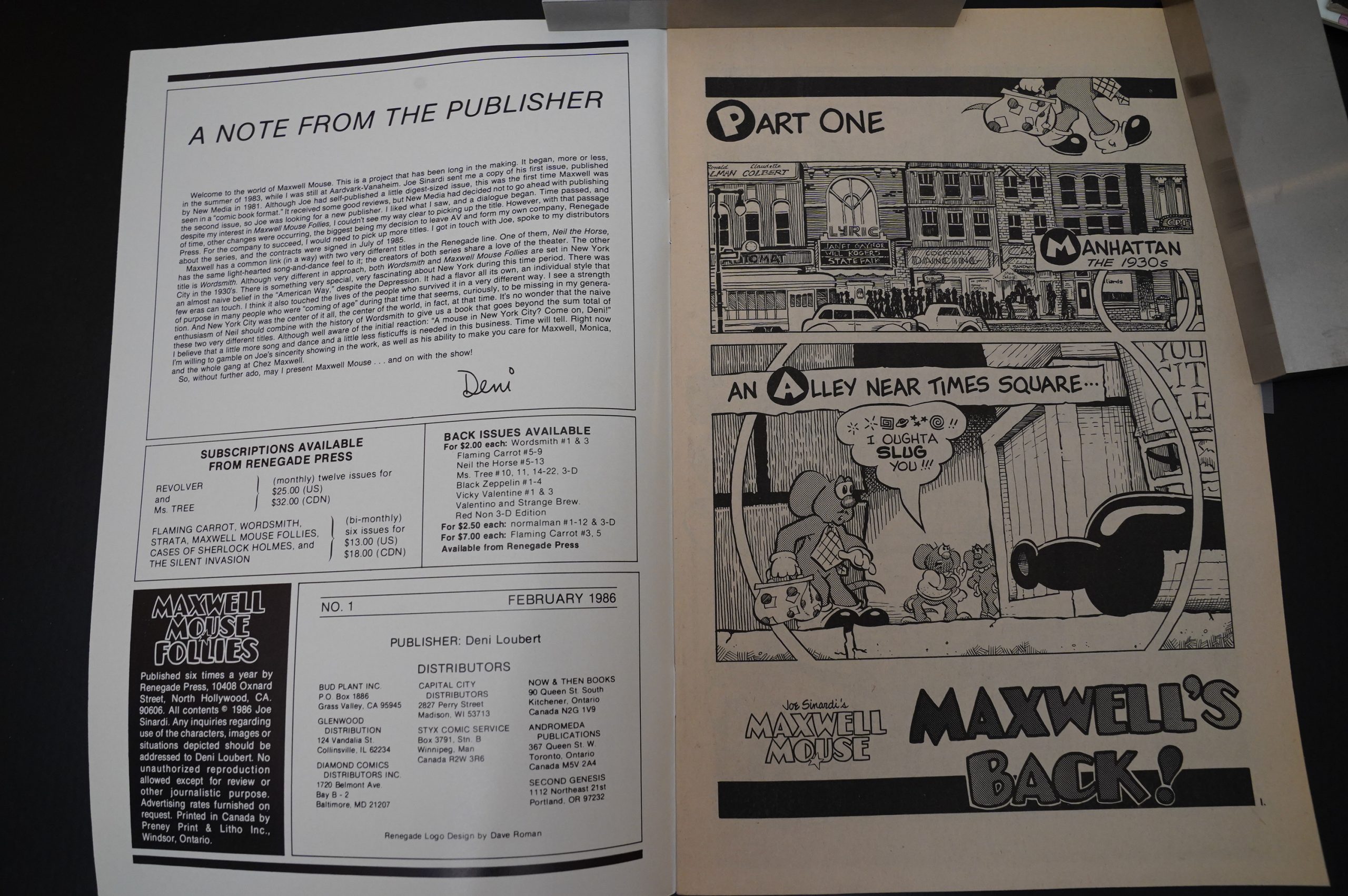 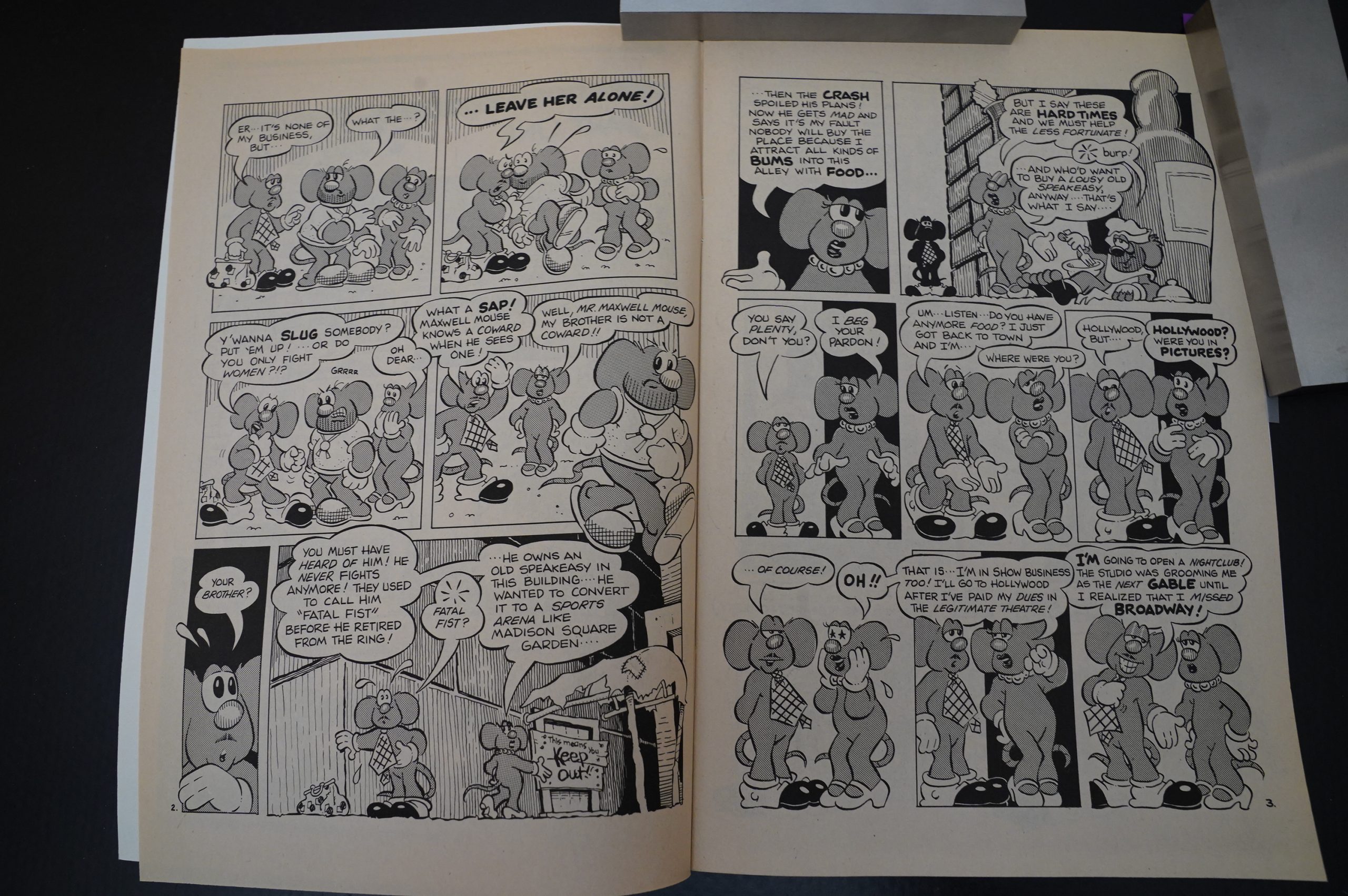 And, indeed, this comic had been in the pipeline for a few years, but Loubert hadn’t been in a position to publish it before now.

So — we’re in funny animal territory here, and it’s immediately somewhat attractive? The anthropomorphic design here is strange, though, even for funny animals. The characters have the classic four fingered (and gloves) design, but the two main characters (Maxwell and Monica) seem oddly… nude. Maxwell wears a tie and shoes, and Monica wears a necklace and shoes, and it just seems really weird. I mean Donald Duck wears a jacket, at least. 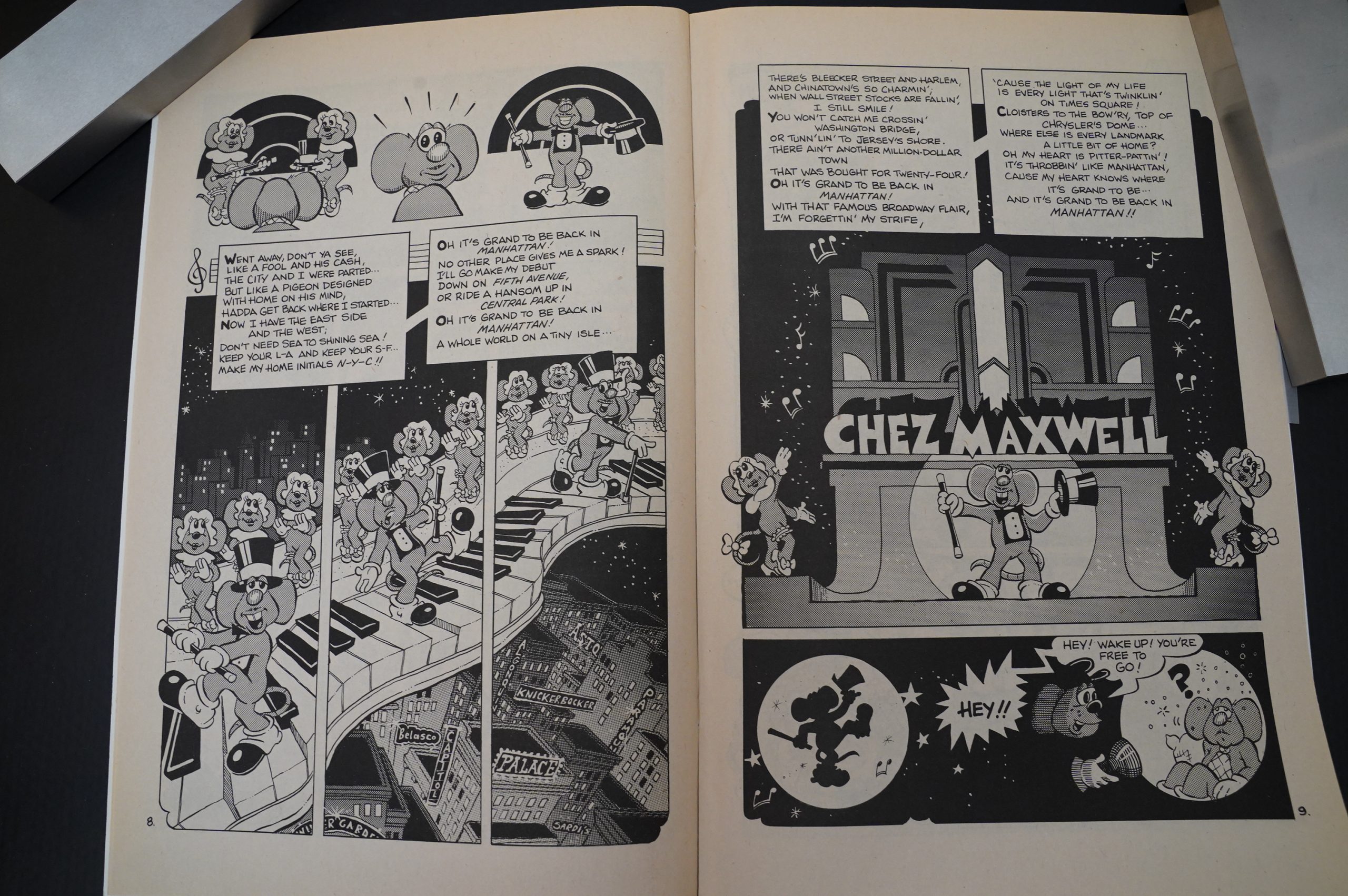 As in Neil the Horse, we get a few musical numbers, attractively designed. (But no sheet music.) 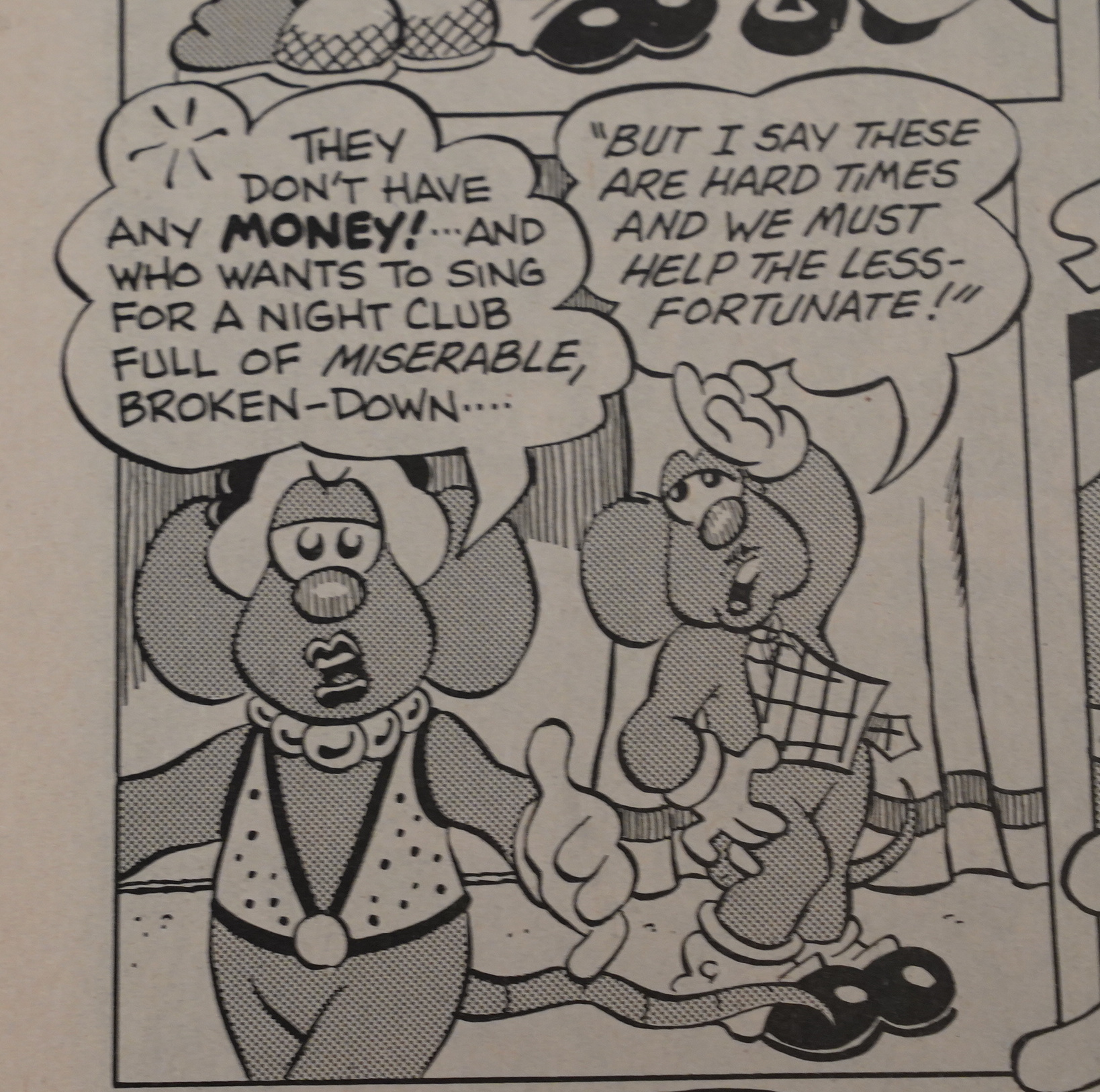 When Monica dresses up, it looks even weirder.

And those are hefty tails for mice. 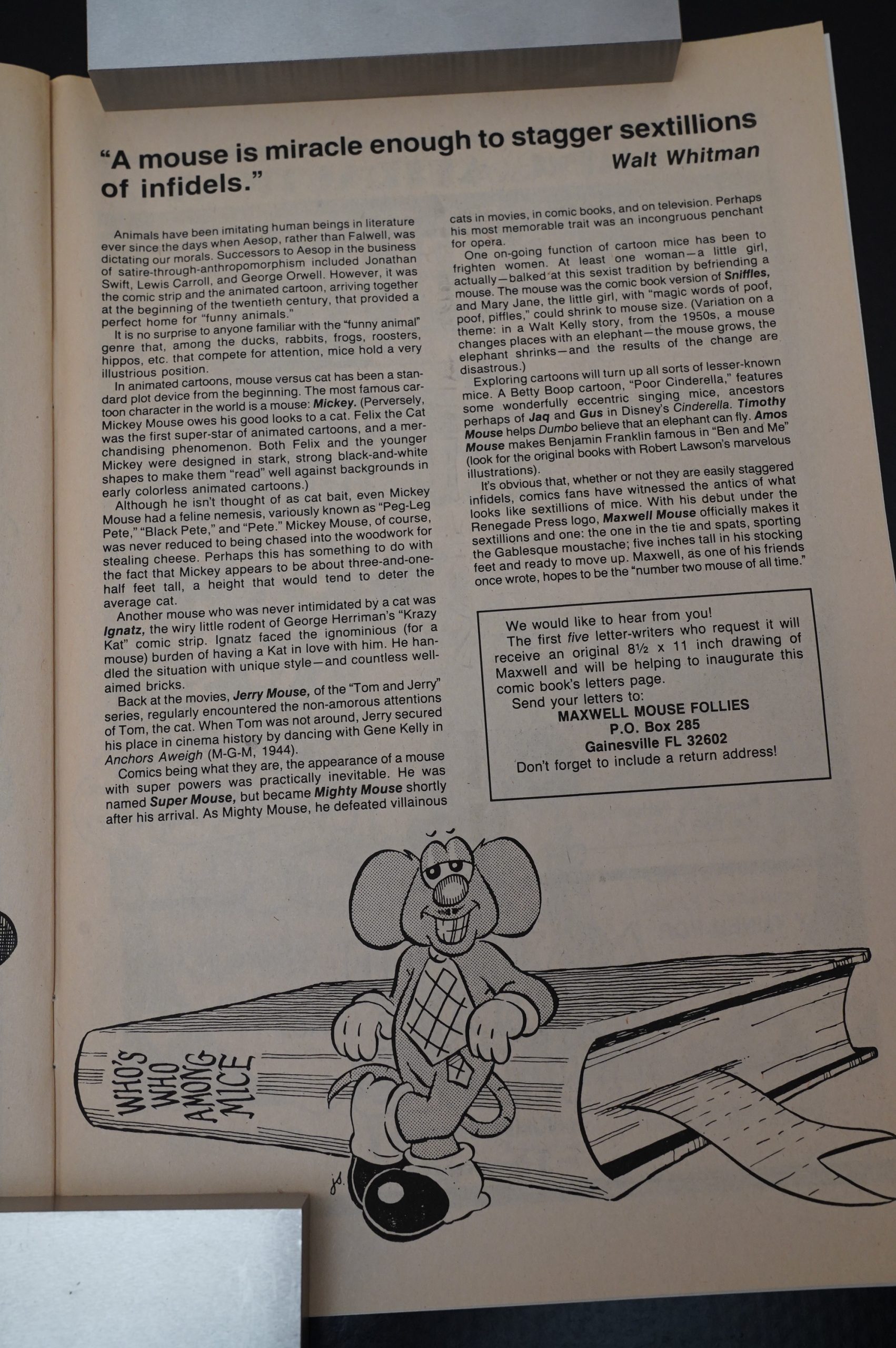 You don’t see quotations from Walt Whitman in funny animal books that often. 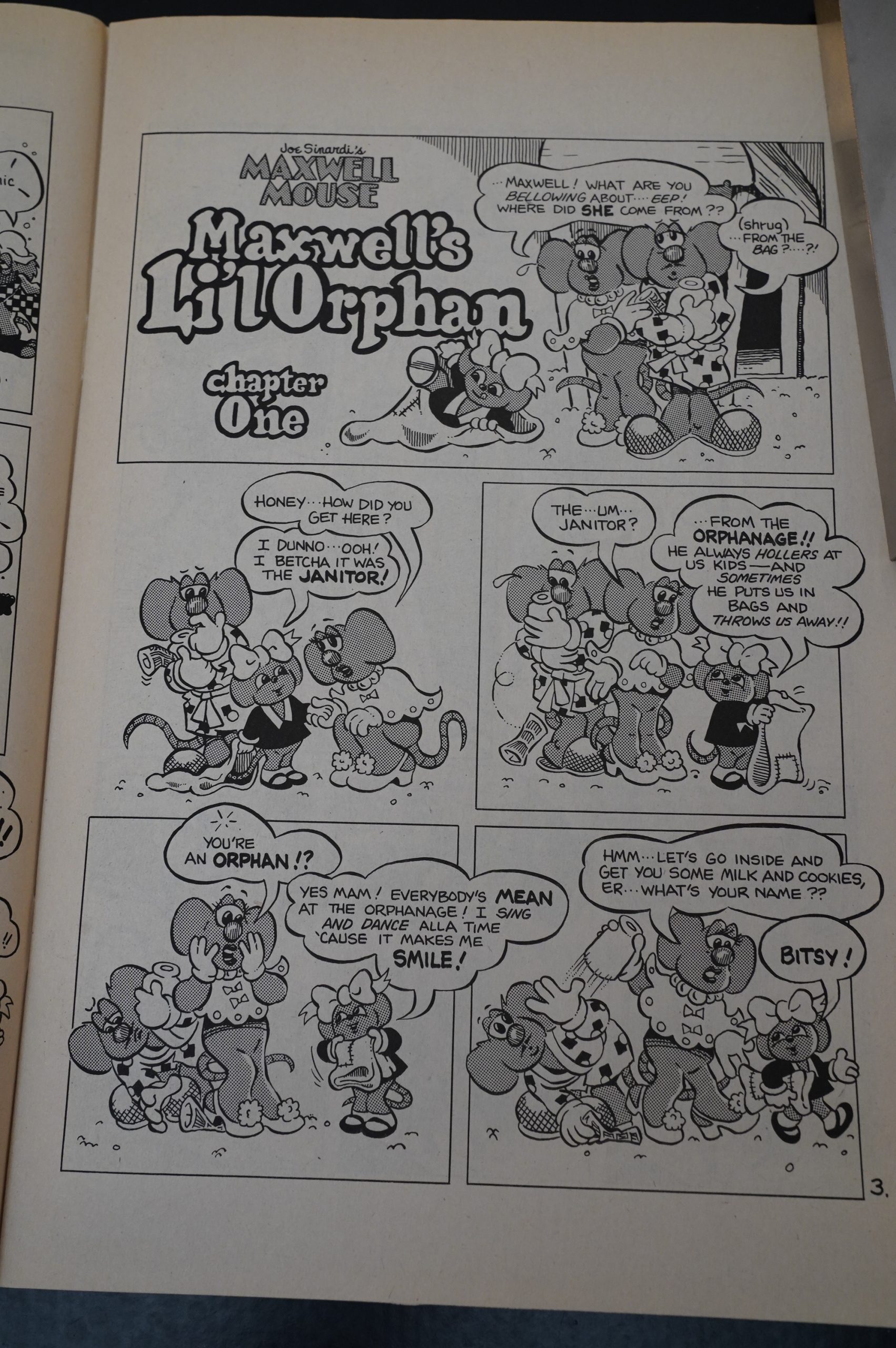 Anyway, this book is surprisingly well made. There’s a lot of amusing bits and references to other comics, and the stories are fun and… actually make sense. I read Strata earlier tonight, so perhaps that has tempered my expectations, but I really enjoyed reading these comics. They move along at a brisk pace. 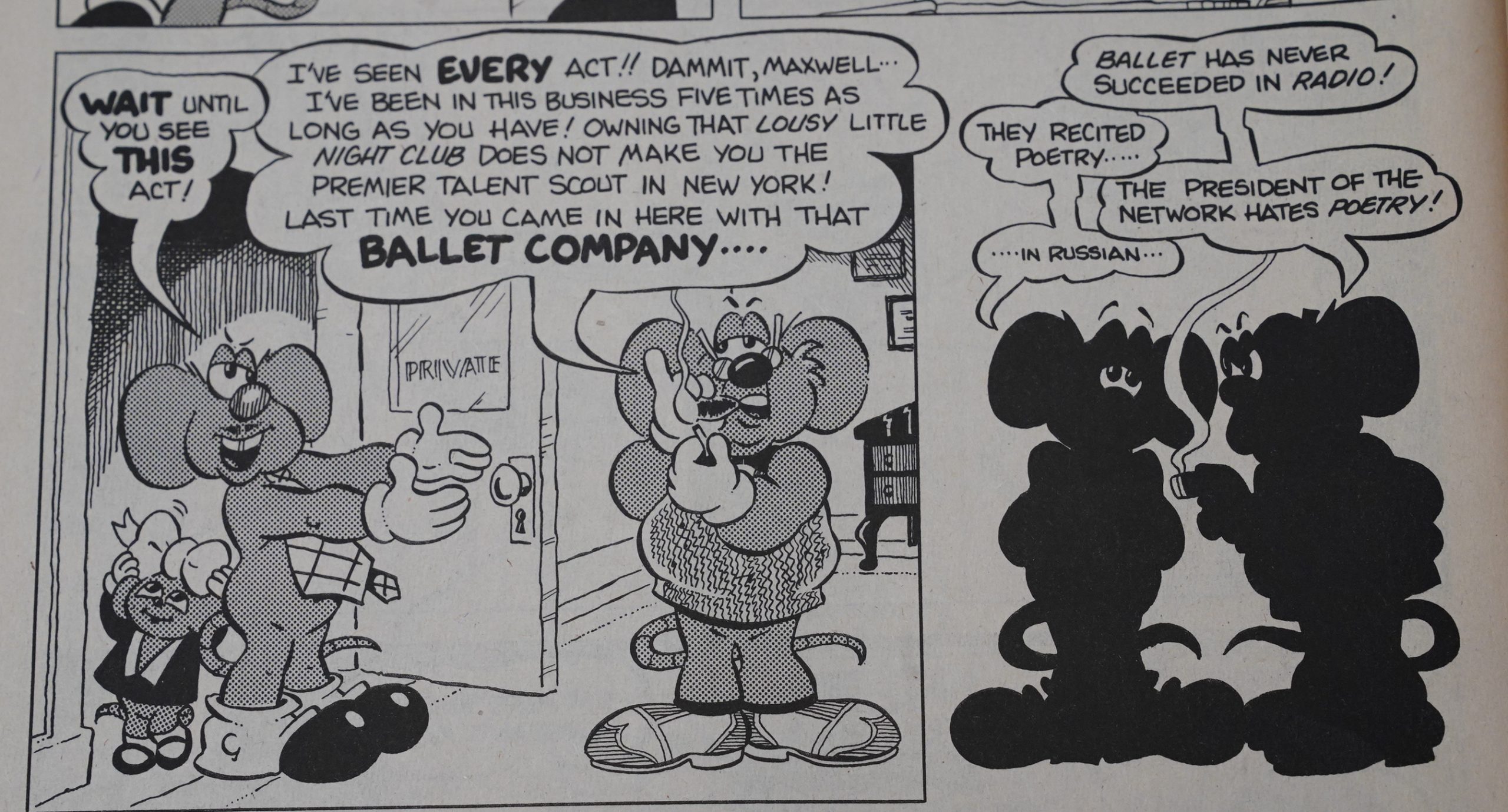 And some of the jokes you could actually picture in a screwball comedy of the 30s. 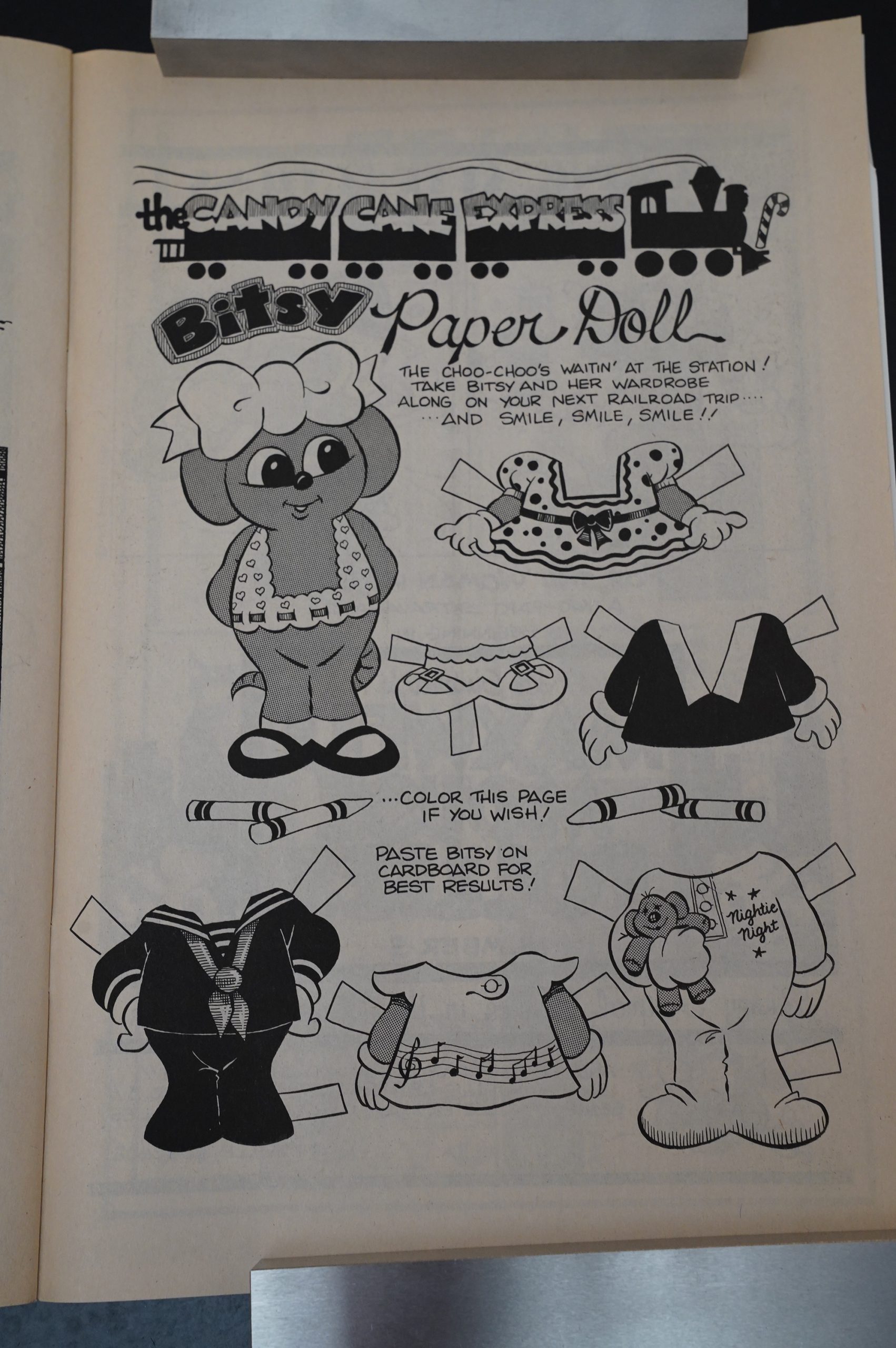 You gotta have paper dolls. 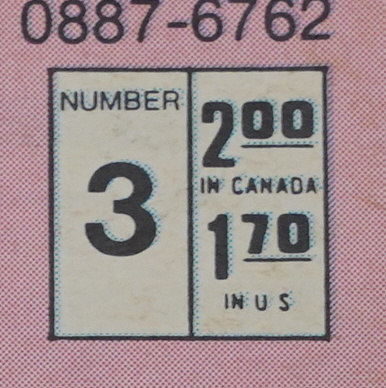 I don’t really have much to say about this comic — it’s nice — so let’s look at some Renegade Press oddities. In the first year, they stubbornly put the Canadian price at the top, which perhaps made sense when Loubert was stationed in Canada… but not even then, because surely you want to have the lowest dollar amount at the top? And besides, the US is a much bigger market. 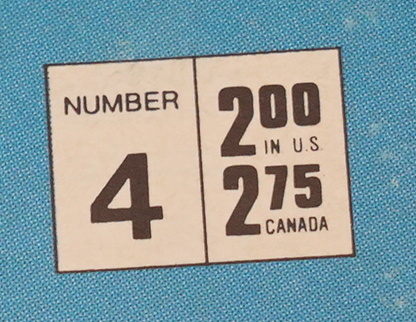 But! When Renegade increase the price across the board, they did put the US price at the top… but it kinda looks the same, eh? The top number remains $2.00. 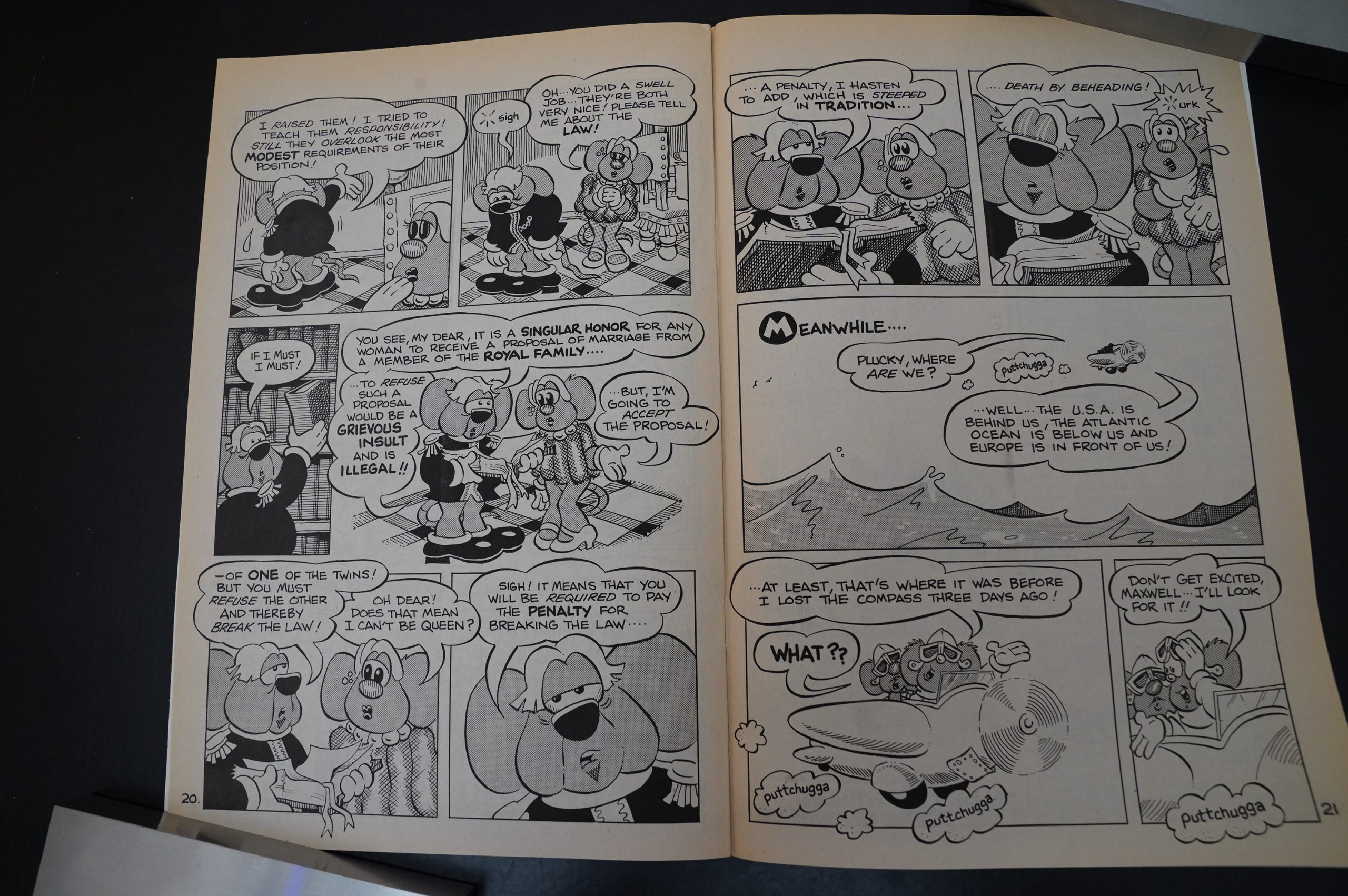 Back in Maxwell Mouse land, we get a two-part story about Monica going off to Europe to marry (or not) a couple of princes. It’s a solid story, and it’s got plenty of amusing gags to keep things puttering along.

There’s perhaps a surfeit of talking (mouse) heads, but we also get some amusing action scenes. 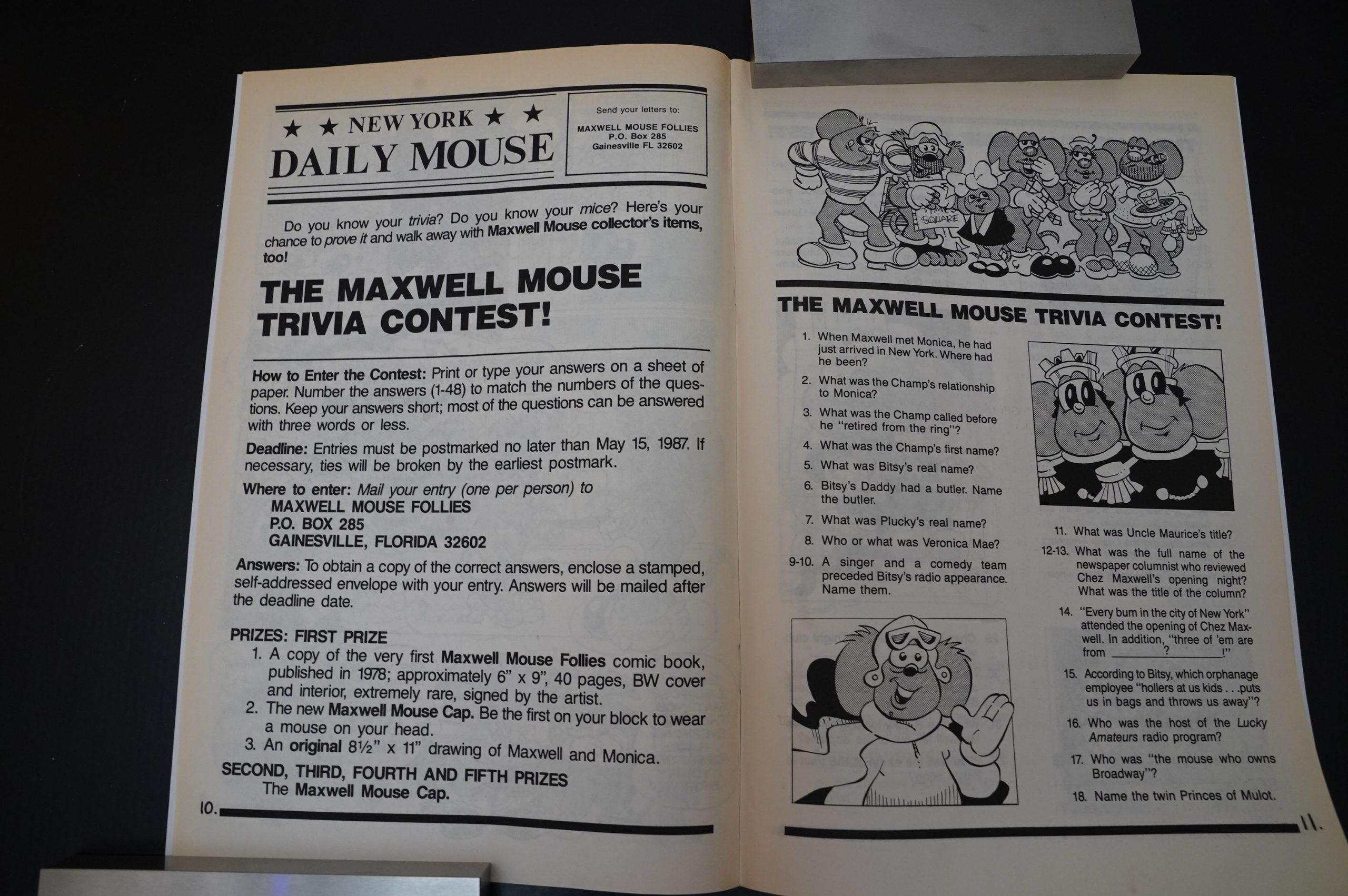 The sixth and final issue is a grab bag of stuff, so I guess sales were tanking or Sinardi was getting busy elsewhere. For instance, we get at 48 (!) question trivia contest… 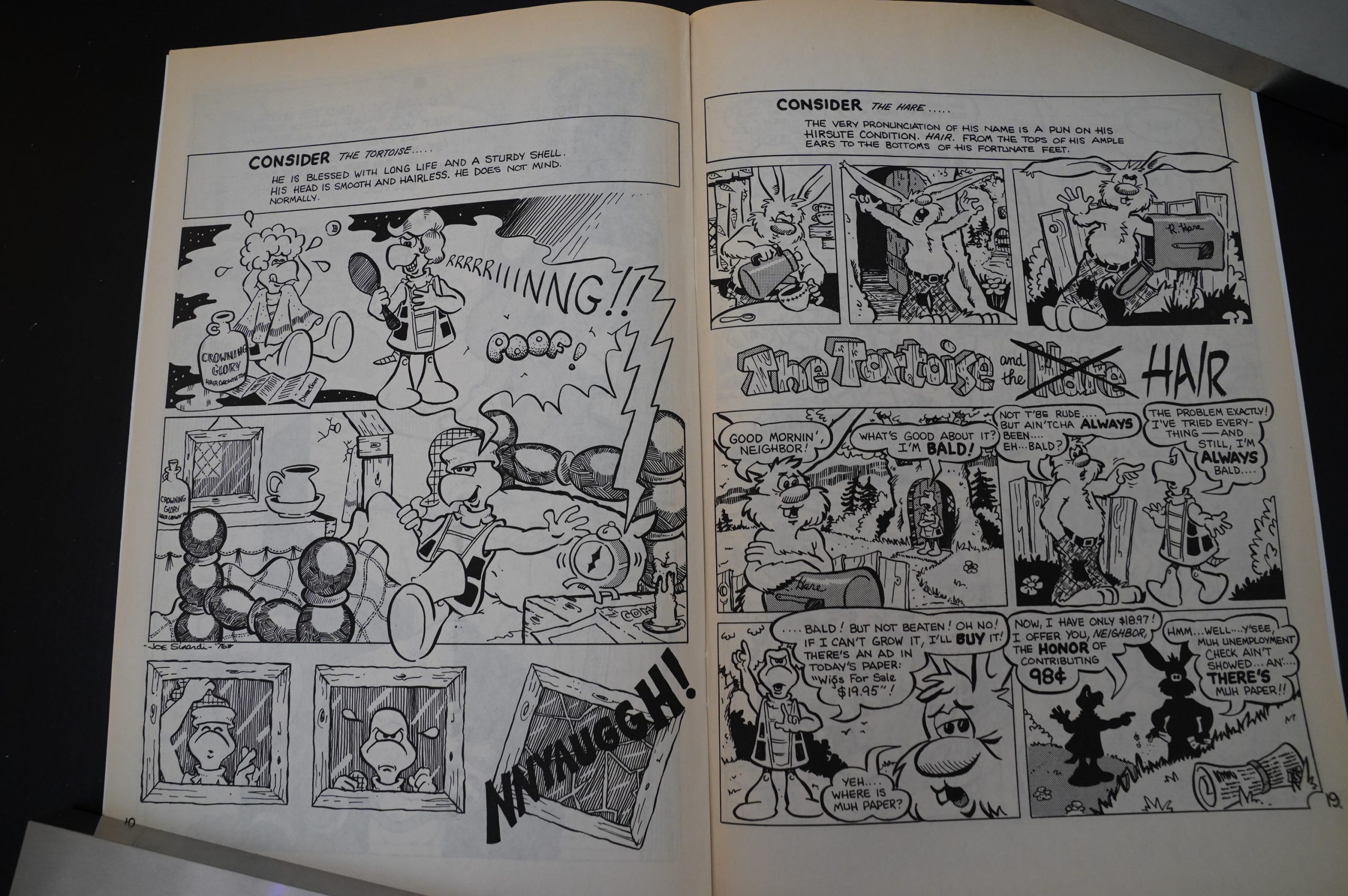 … and a non-Maxwell story probably meant for an anthology somewhere.

This series has never been reprinted, and neither has the original first issue: 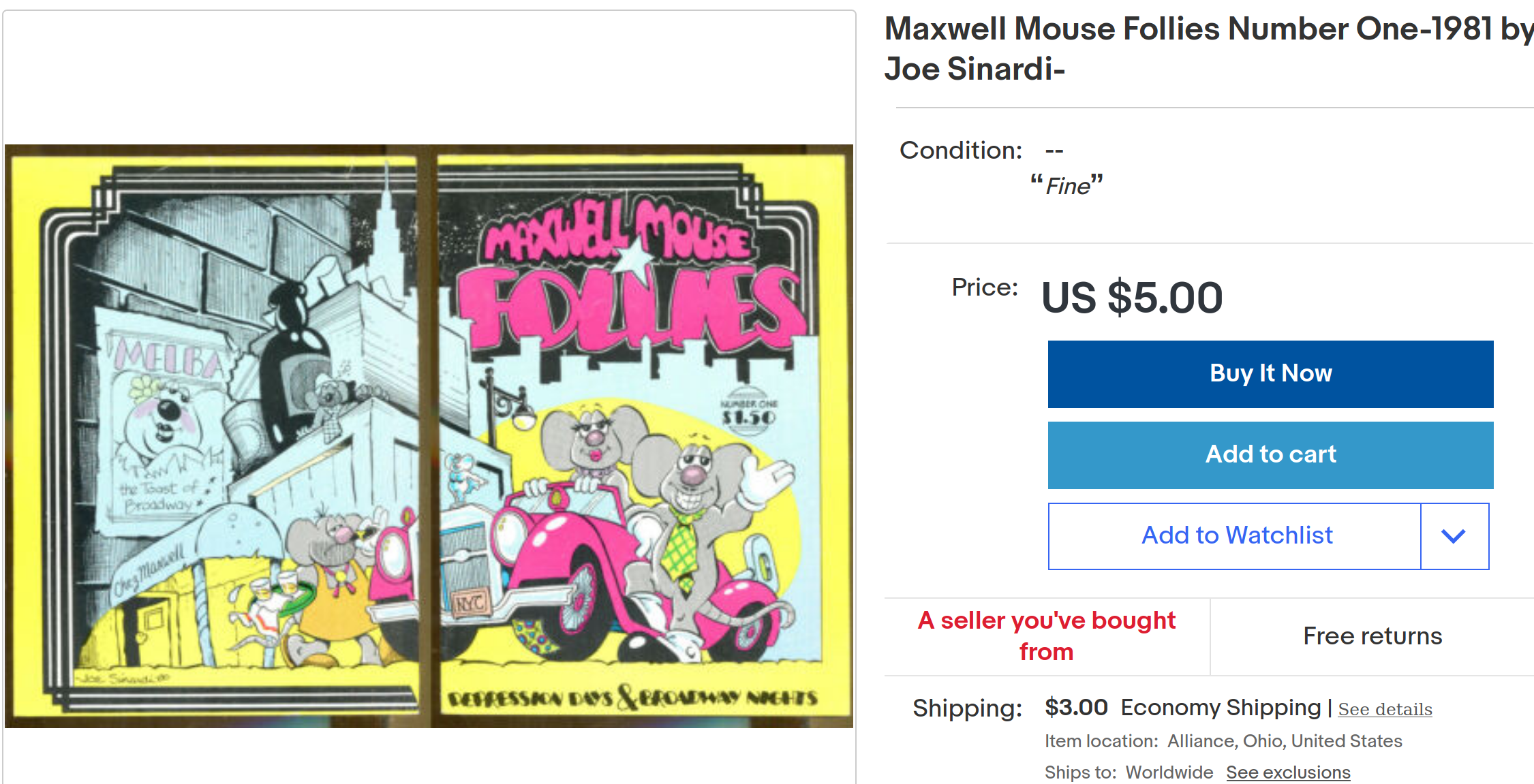 But you can get these comics cheaply.

Looks like Sinardi has plans to bring this series back somehow?

I was unable to find any articles about this series on the intertubes, but Dale Luciano writes in The Comics Journal #69, page 50:

Like a scene out of a ’30s movie, Maxwell
Mouse Follies begins with a luckless hbbo
ambling up to a nattily dressed sharpie
with a Harlowesque blonde draped all over
his arm. “Brother… could you spare a
dime??” comes the familiar refrain from the
hapless hobo. “Outta da way, riff-raff!”
barks the sharpie, belting the hobo a solid
‘ ‘BOFF!”‘ across the chin. “Ooh! You’re so
strong!!” coos the blonde to the sharpie, as
they stroll off down the avenue. ‘As the
forlorn hobo picks up his cap, writer-artist
Joe Sinardi has a luckless hobo-mouse
amble into the panel, followed by a sharpie
mouse and his date. Whereupon the entire
ritual episode is repeated verbatim, placing
the story in depression era New York as
experienced by mice.
It’s a good framing device for this affec-
tionate, clever parody of the conventions
of ’30s Hollywood musicals (as in “Broad-
way! Music! Drama! Romance!”).

From every indication, Sinardi has had a
good time writing and drawing Maxwell
Mouse Follies. He manages quite a few neat
travesties on standard cliches of the
genre—a wryly nonsensical caption at the
opening reads, “The Thirties… Hard
Times… Touch a star and touch the pave-
ment… In the end, it feels the same,” which
somehow manages to sound exactly like
’30s Hollywood doggerel-poetry—yet
Sinardi’s affection for the era and the
dramatic conventions are always apparent.
Basically, Sinardi reproduces the stock
situations of ’30s musicals and plays them
out in a fairly farcical way. Many of the
humorous results are silly, and gags and
situations don’t always pay off as they
should. Sinardi as writer hasn’t always
come up with enough funny lines to keep
the material aloft, but Maxwell Mouse
Follies has an antic, quirky spirit that keeps
you charmed and entertained. The weak-
ness of any single episode and a tendency
toward too much anthropomorphic cute-
ness are compensated for by the overall
appeal of Sinardi’s concept. I wish some of
the writing were better, but the book is still
good.

A couple of new Renegade funny books
also aim to beguile. Each misses its mark by
only a hair. Maxwell Mouse Follies, by Joe
Sinardi, advertises itself as offering “funny
animal comics in the classic tradition,” and
that’s fair enough, if we can expand the
classic tradition to include the liberal
sprinkling Of hells and dammits found here.
Sinardi’s art has plenty of charm, and he
has worked out a delightful mousie.sized
culture, so-existing With the human-scaled
Manhattan of the 1930s. What’re missing
here are the laughs. The second issue
revolves around a adorable little
orphan mousie named Bitsy who provides
about as much fun as a rotten molar. Max-
well Mouse Follies is busy and cute instead
of funny.

And here’s a page from an Amazing Heroes Swimsuit Special: 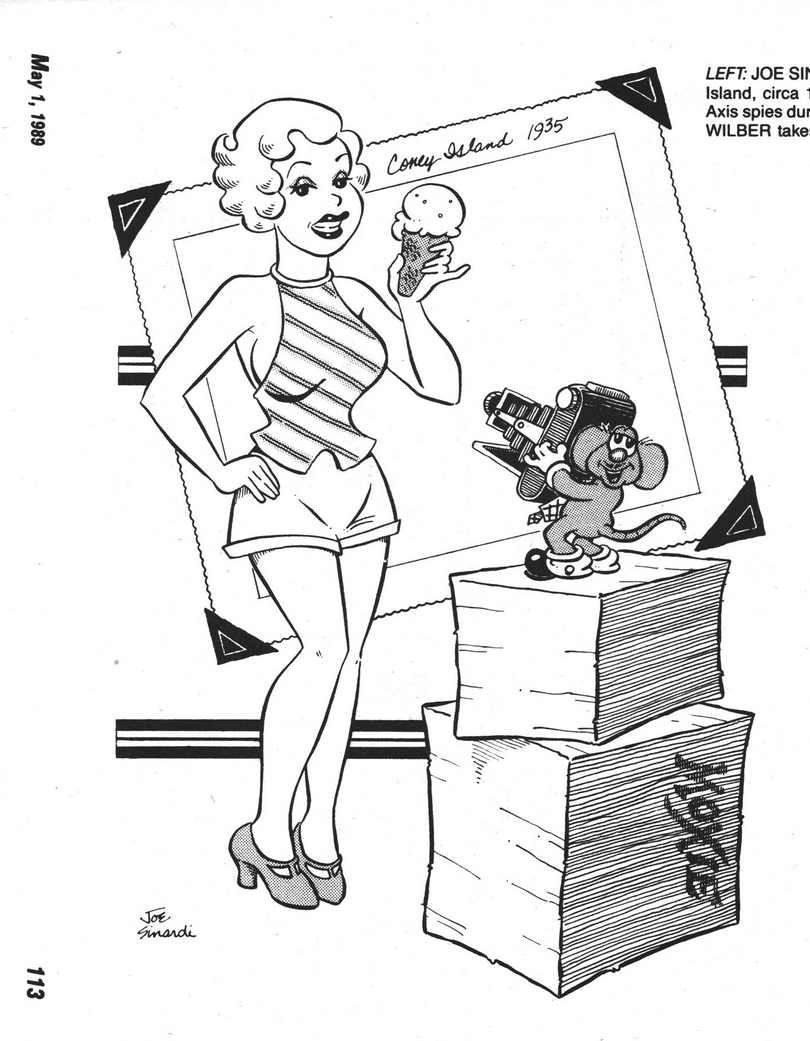