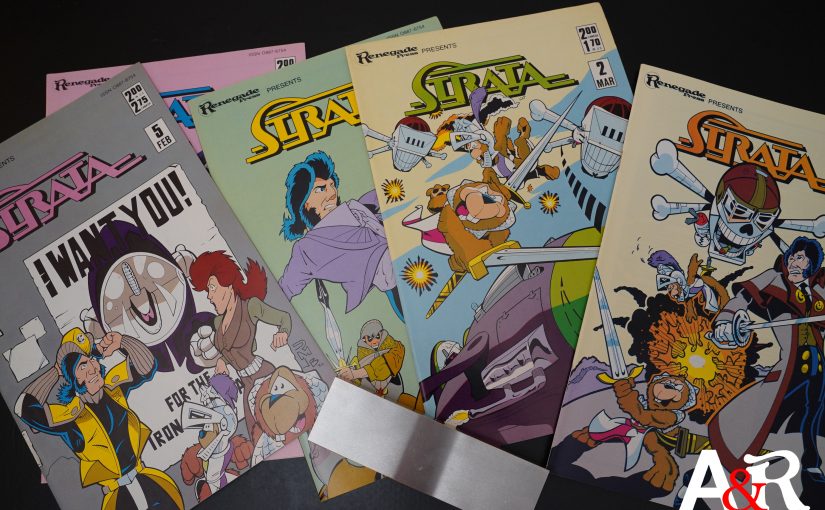 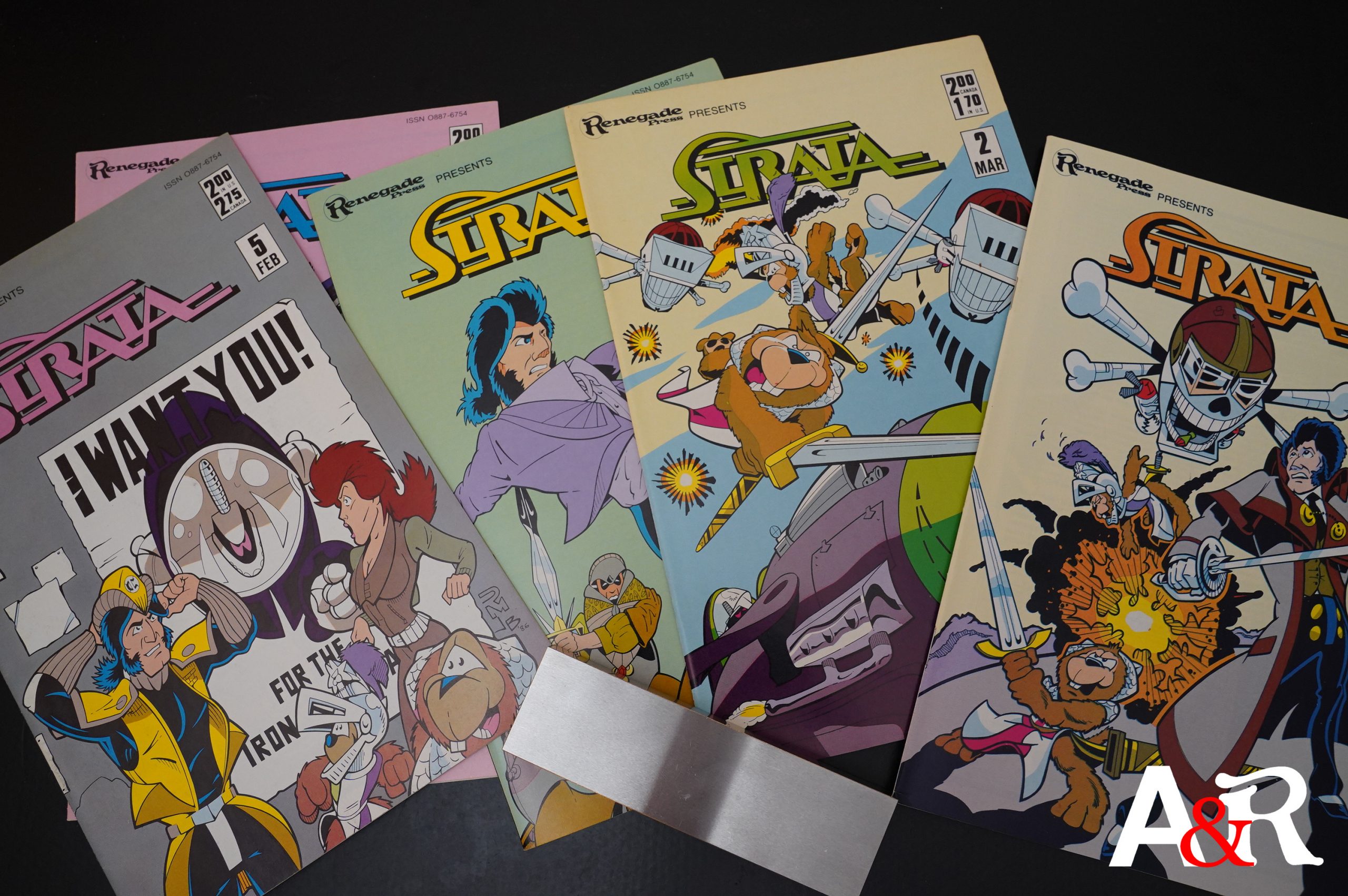 Renegade’s publishing profile is pretty odd, to say the least, but most of the series published by Loubert up till now had been by a single creator, or at most a writer/artist pair. This is the first that has a writer/penciller/inker line-up, I think? 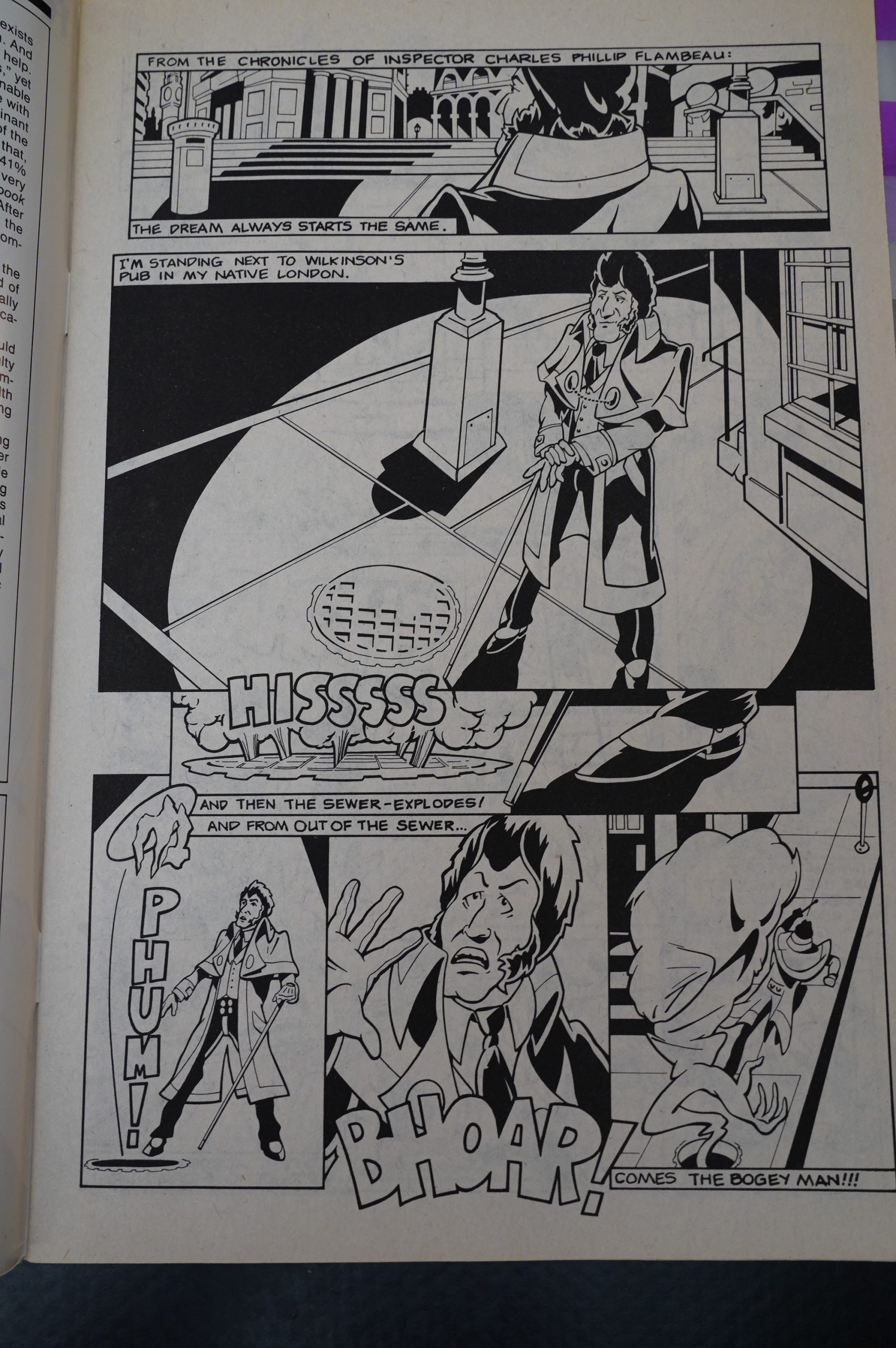 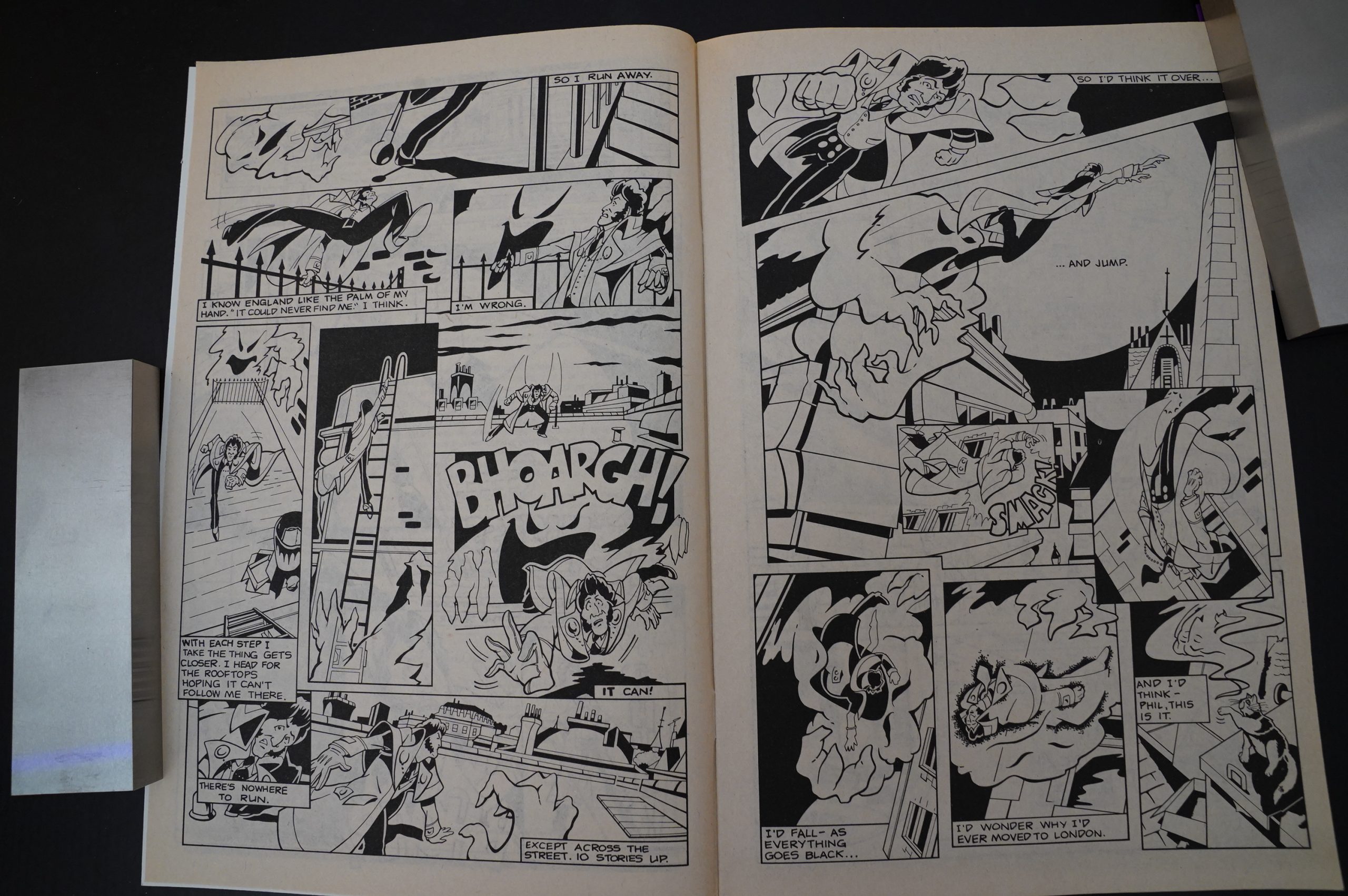 Well, that’s kinda stylish? It’s very stark: No cross-hatching or tone or anything, but a pleasing variation in line weights and black spotting.

It’s also a bit difficult to actually read — my eyes are skidding all around these pages without finding any purchase whatsoever. 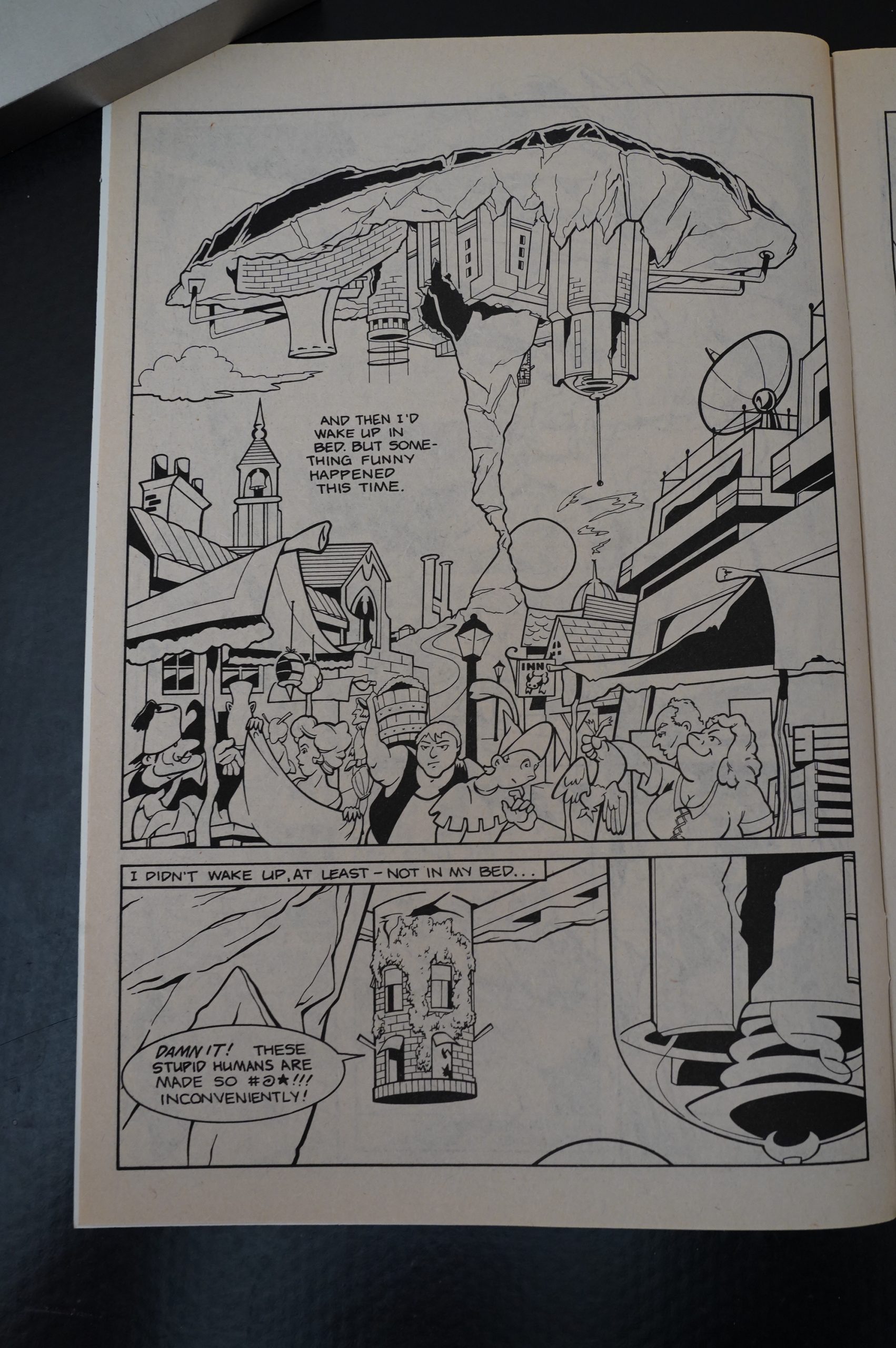 And that’s even before we get to the other worlds, where the design of the world and the characters makes things even more difficult to grasp. 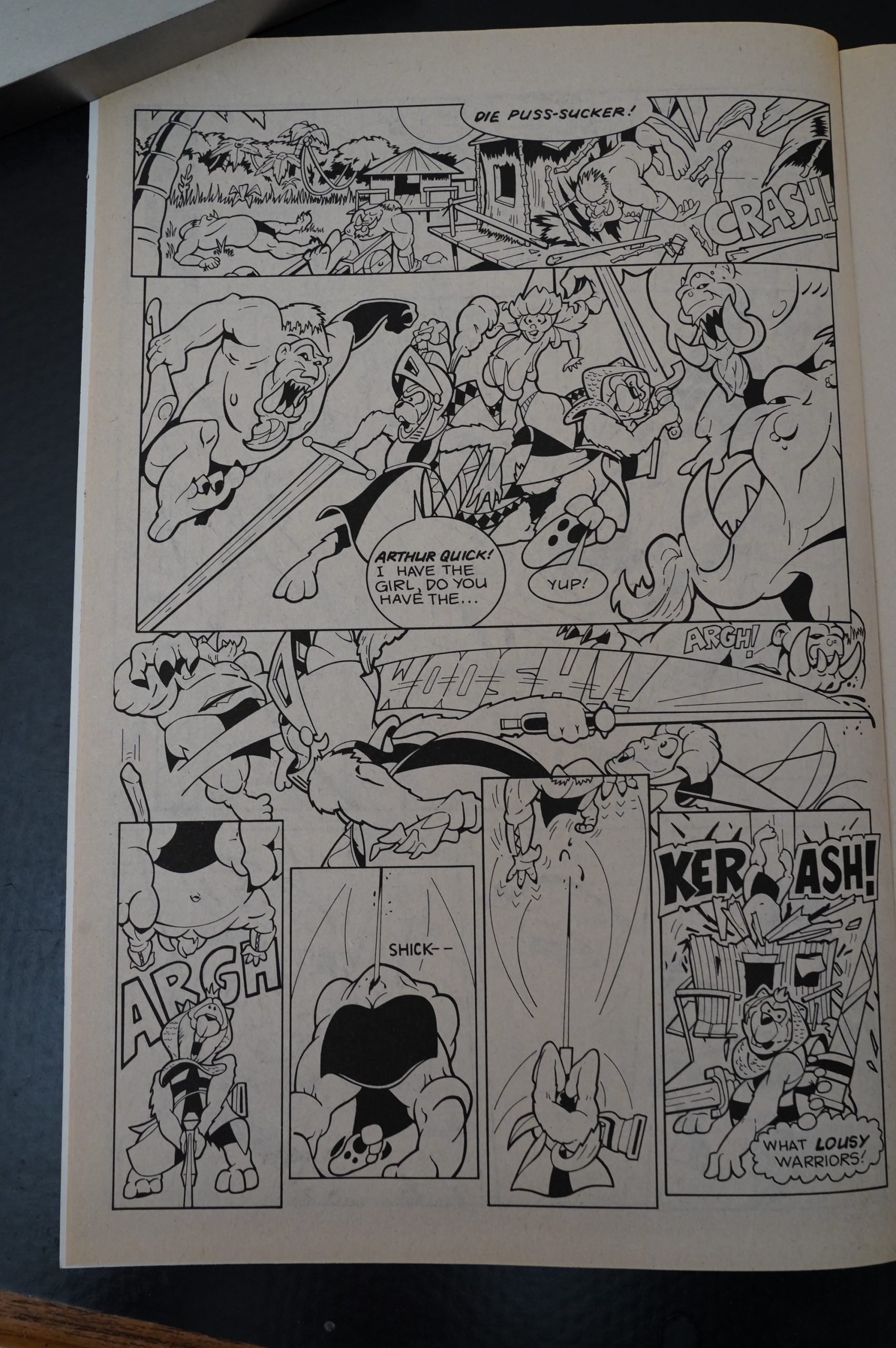 Like… what… what’s going on? If you sit down and concentrate and interpret each panel, character by character, it’s not impossible to make out what’s happening here, but it’s just migraine on paper.

I know nothing about the creators, but I’m going to go ahead and guess that the penciller (at least) is quite young, and has an idea about making chaotic, fun comics, but the chops just aren’t there. Instead of being over-the-top weird action, it’s just a bunch of noise. 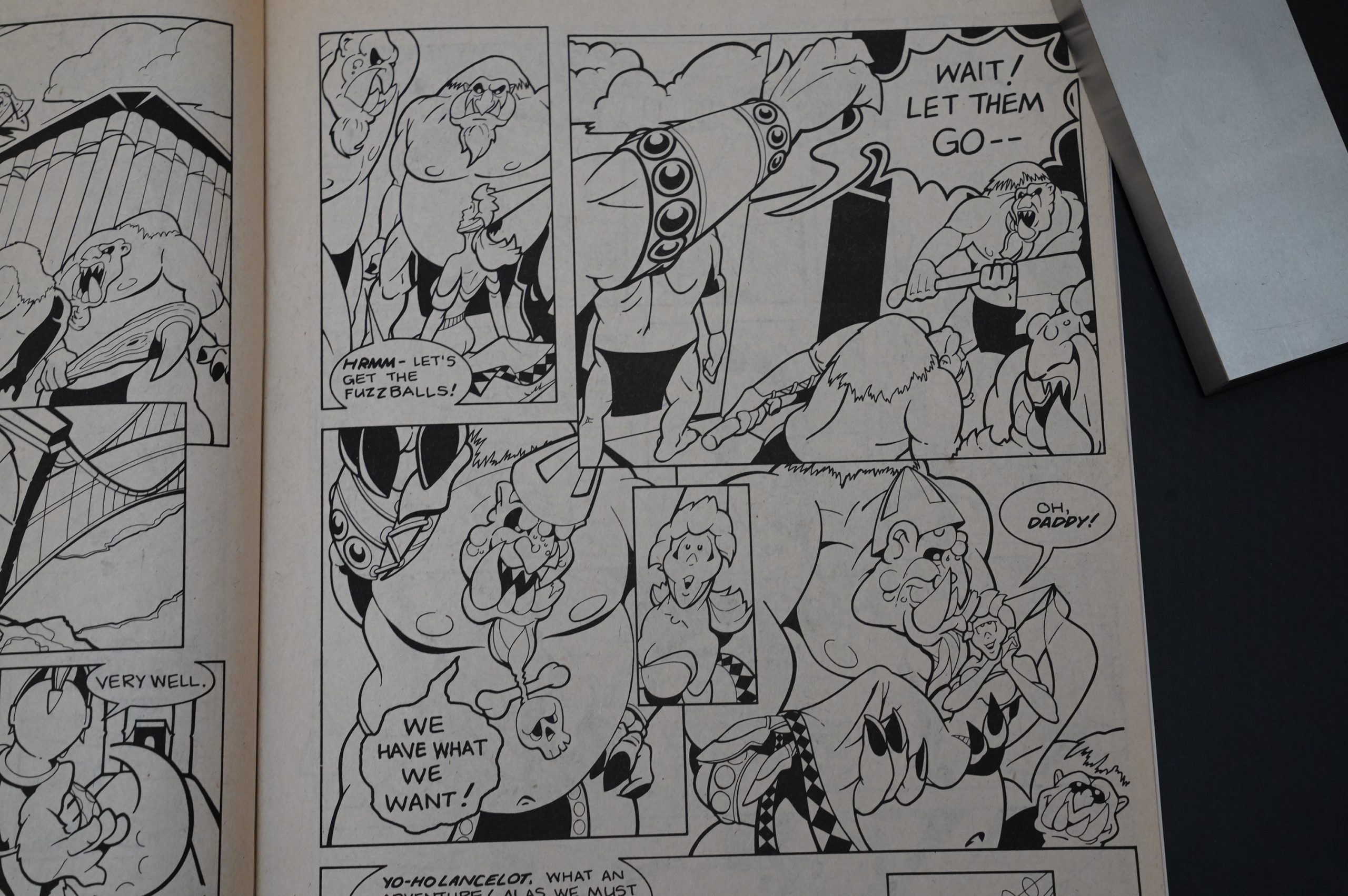 That the story doesn’t make much sense (I think? it’s hard to tell) either doesn’t help. 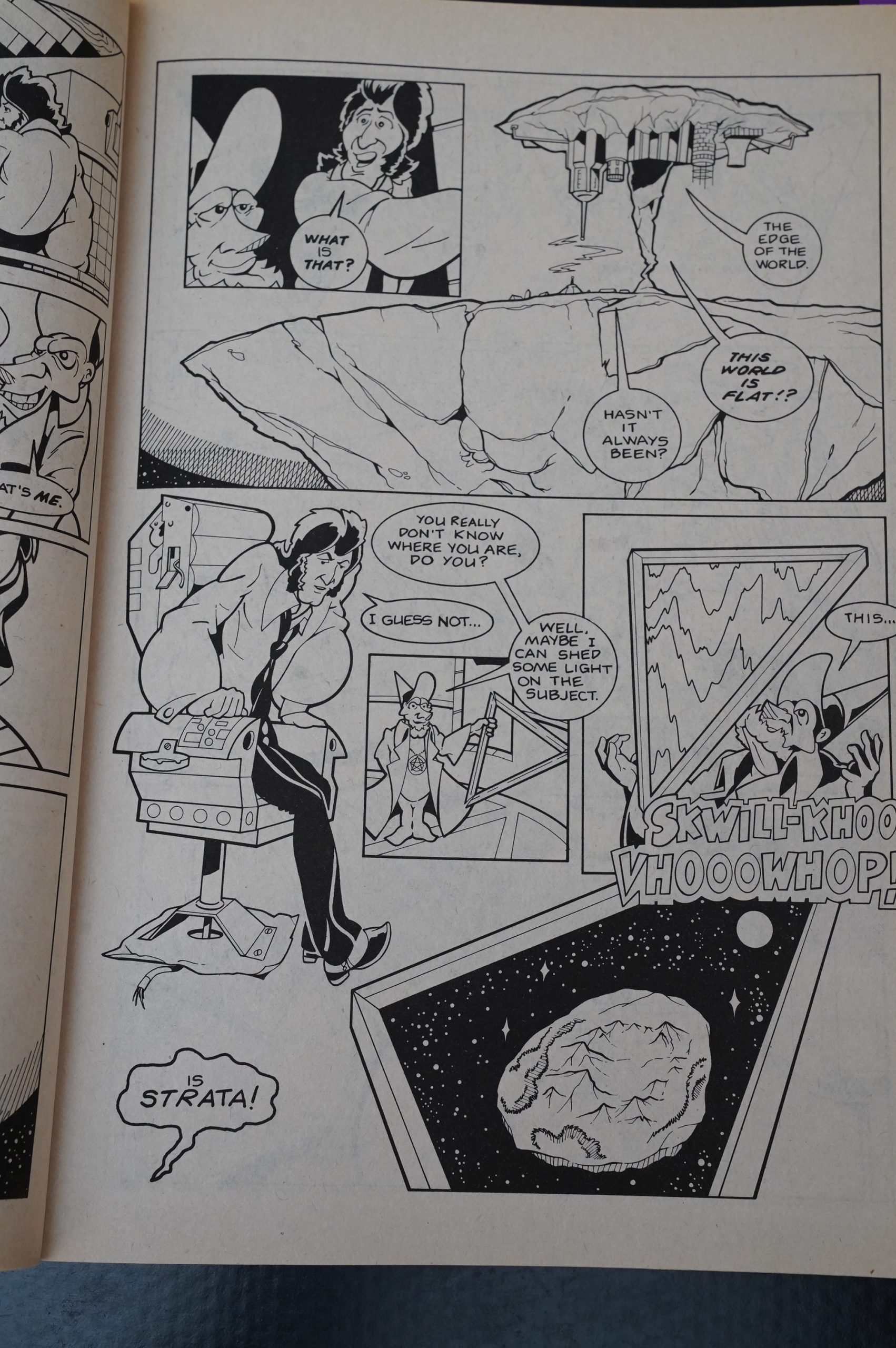 And it turns out that we’re on… Discworld? I mean Strata. 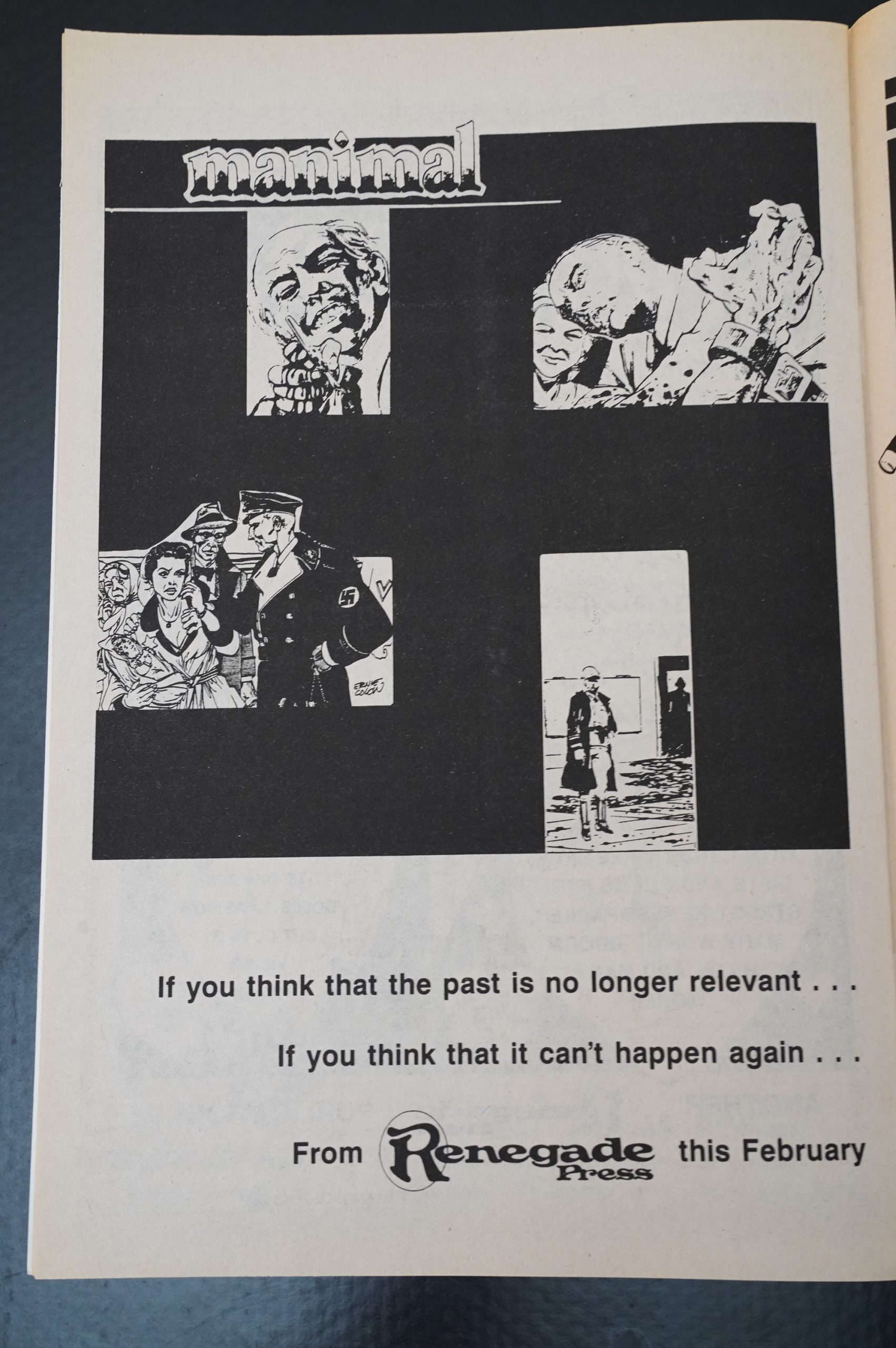 That age-old question: “What does a graphic designer do?” The answer is “Not work at Renegade”.

… Oh! I didn’t get that it was a swastika! I just thought it was a very odd collection of panels oddly cropped.

So perhaps they had a graphic designer anyway. 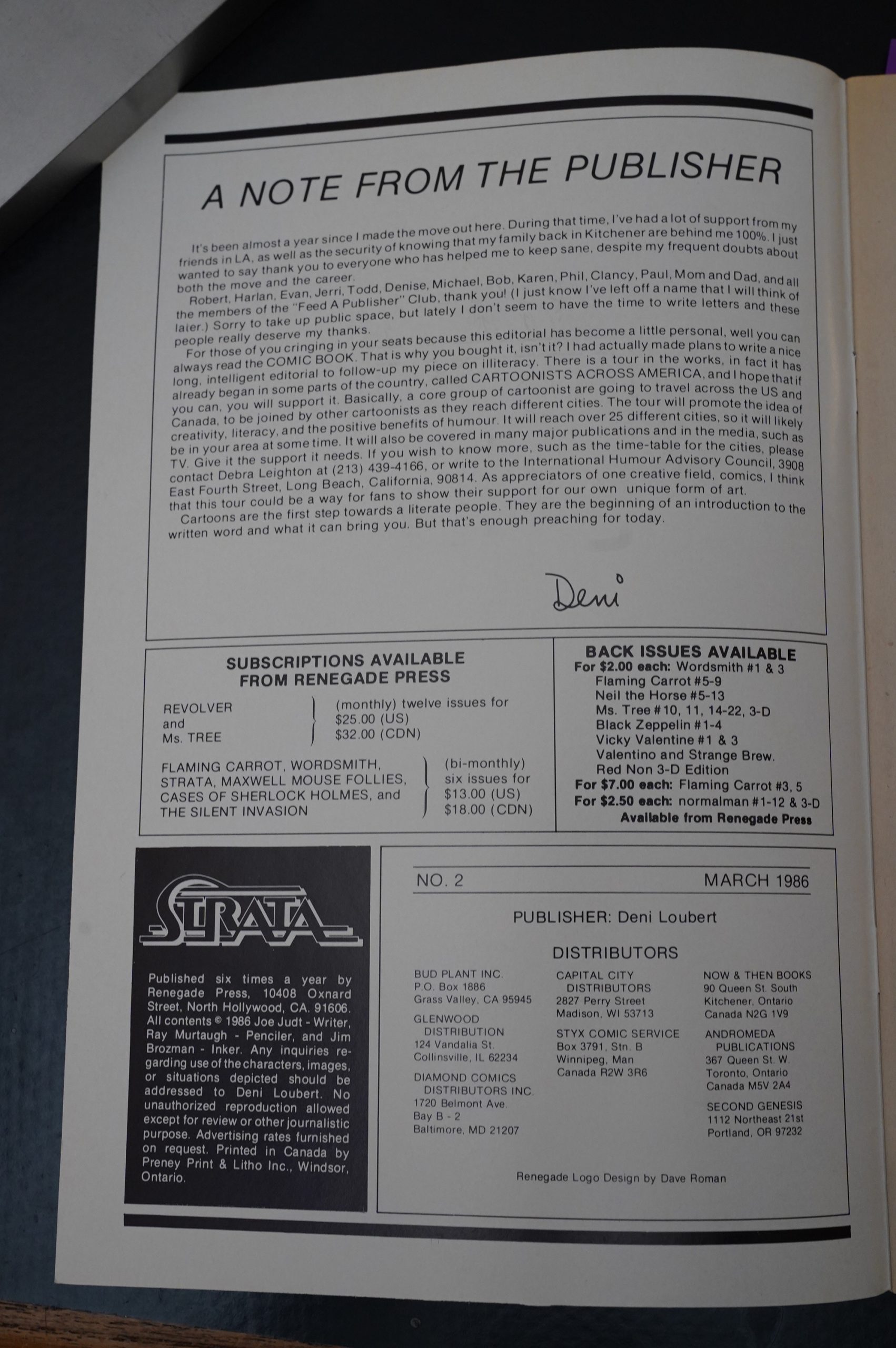 In the first year or so, Deni Loubert had written introductions to all the comics. But by now she’s just running the same one in all the comics (per month). Makes sense. 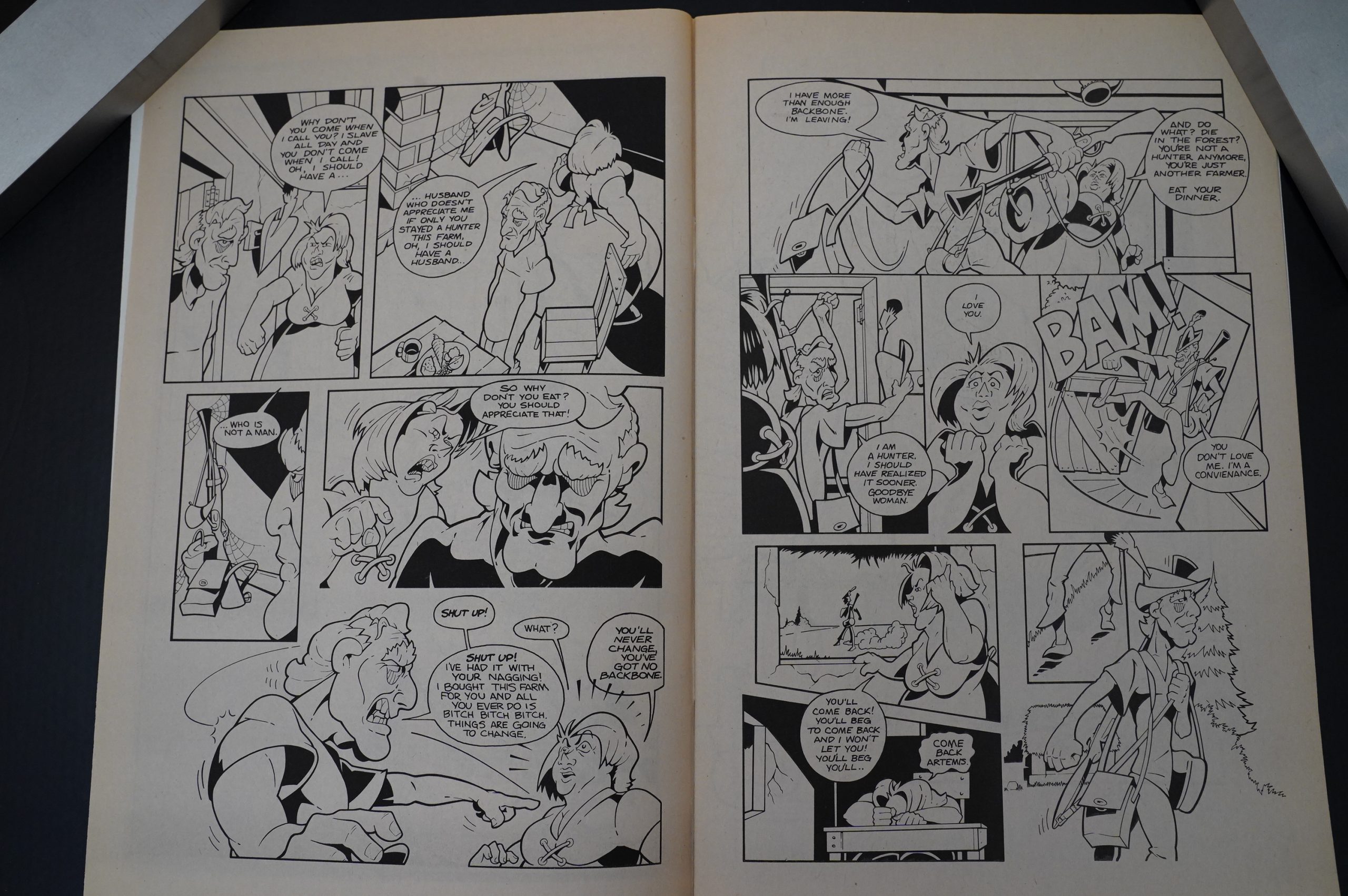 I wondered whether there was going to be rapid artistic development on display here, but nope. 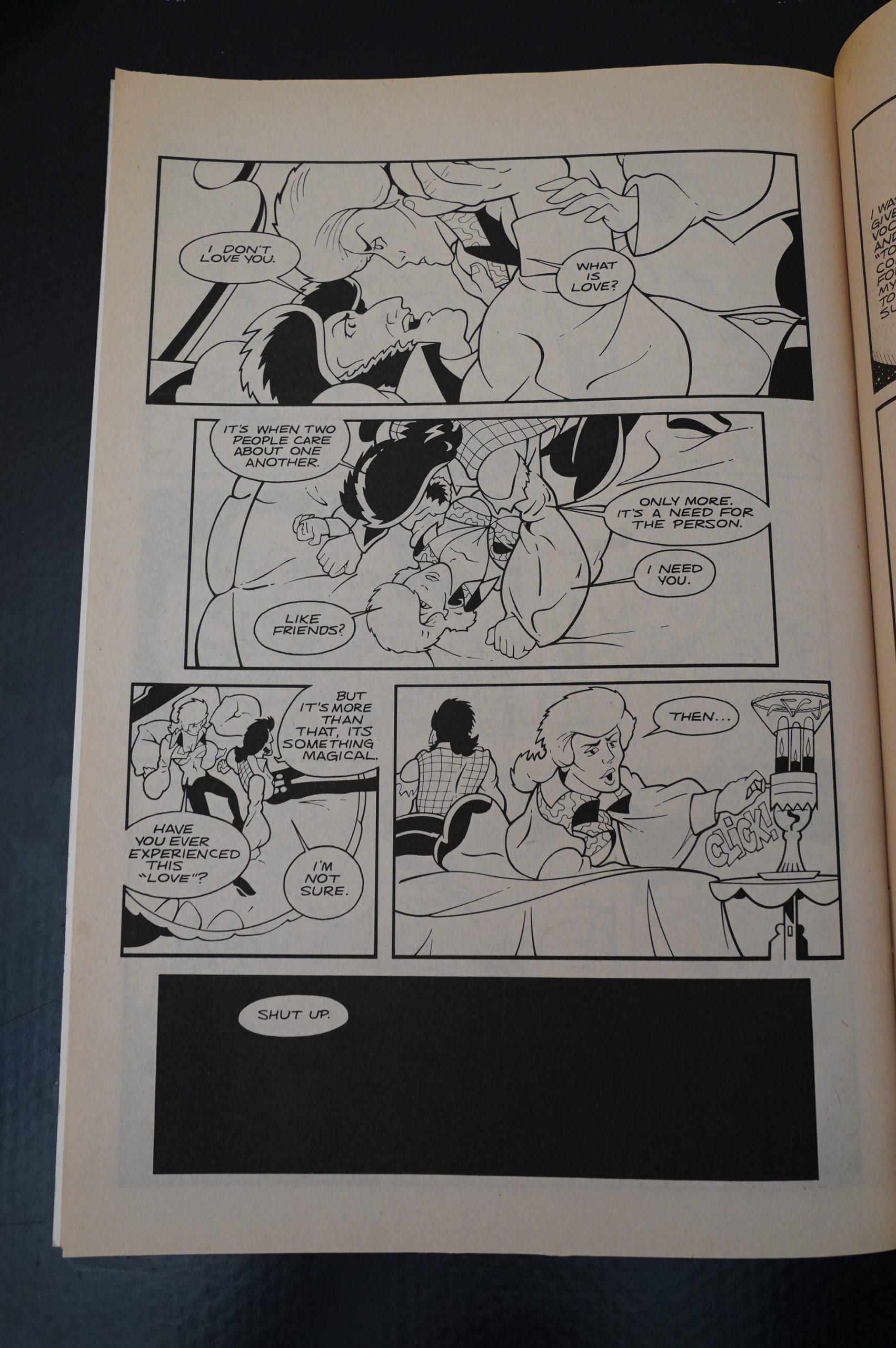 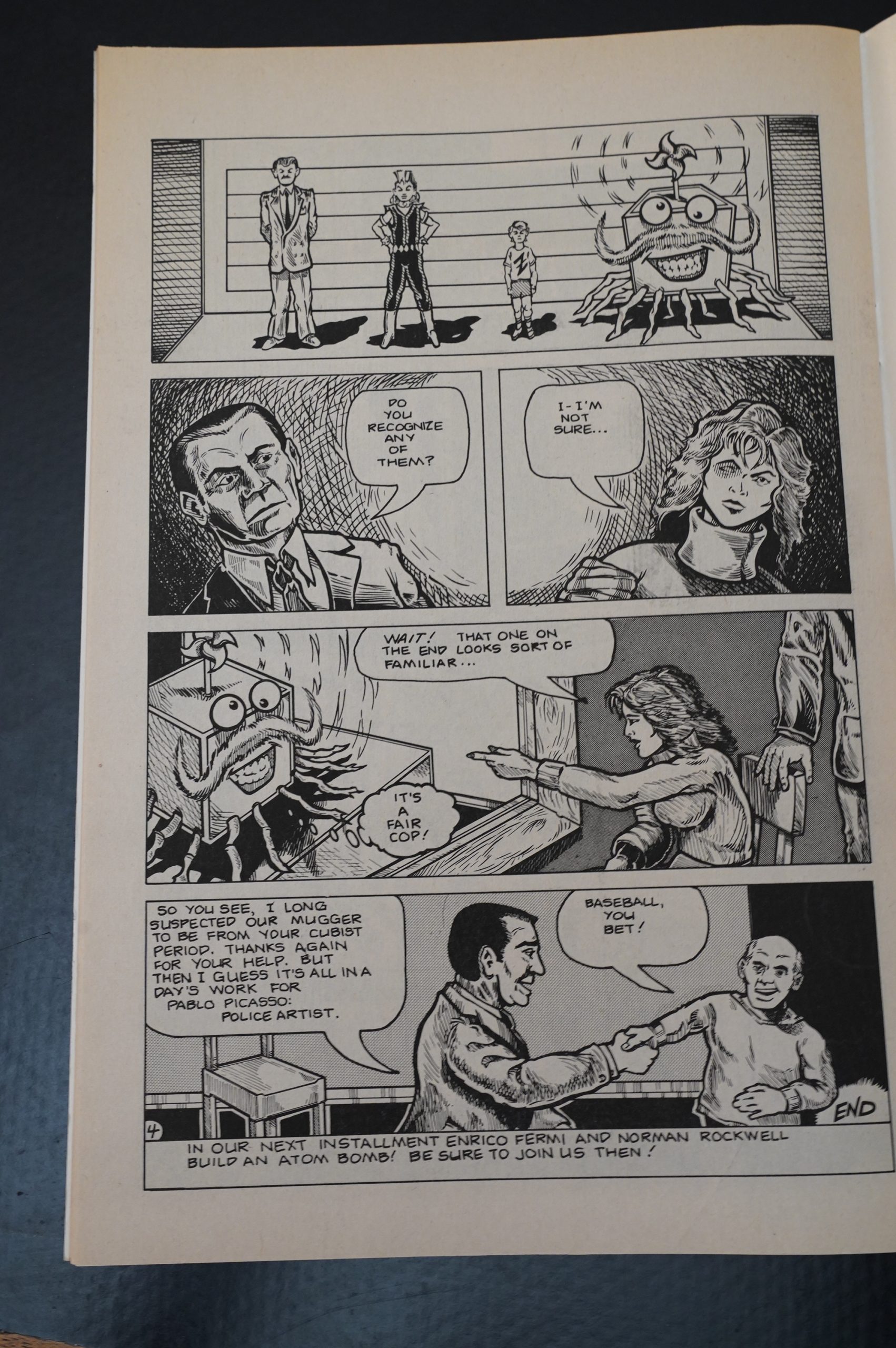 Inker Brozman does the all the artwork on this amusing back-up story written by Jack Herman. It’s about Picasso being hired as a police sketch artist. 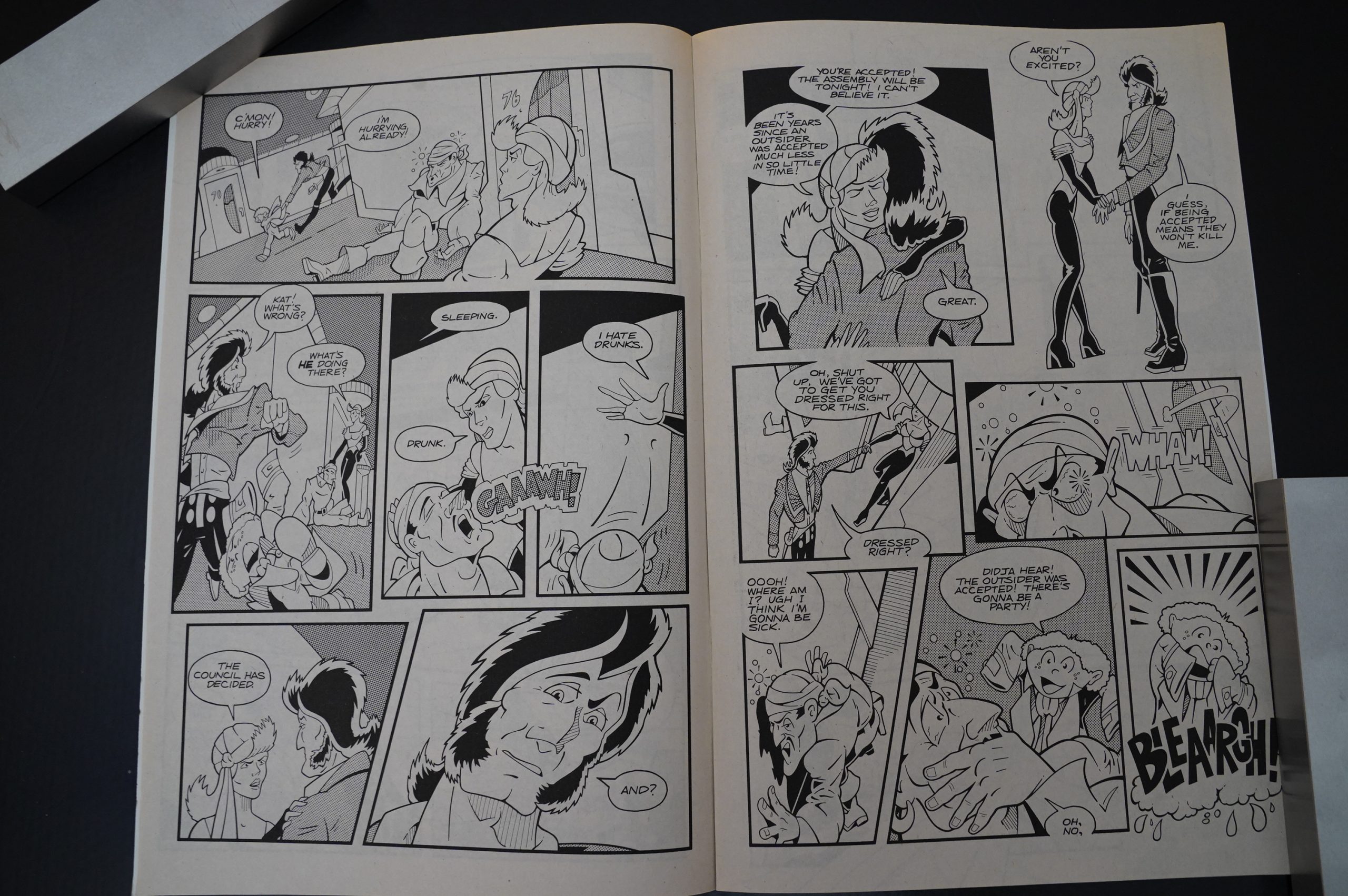 In the third issue, somebody has finally tipped the artists about something called “tone”, and the pages suddenly become legible. But at the same time, they also lose the stark attractive qualities the artwork had. 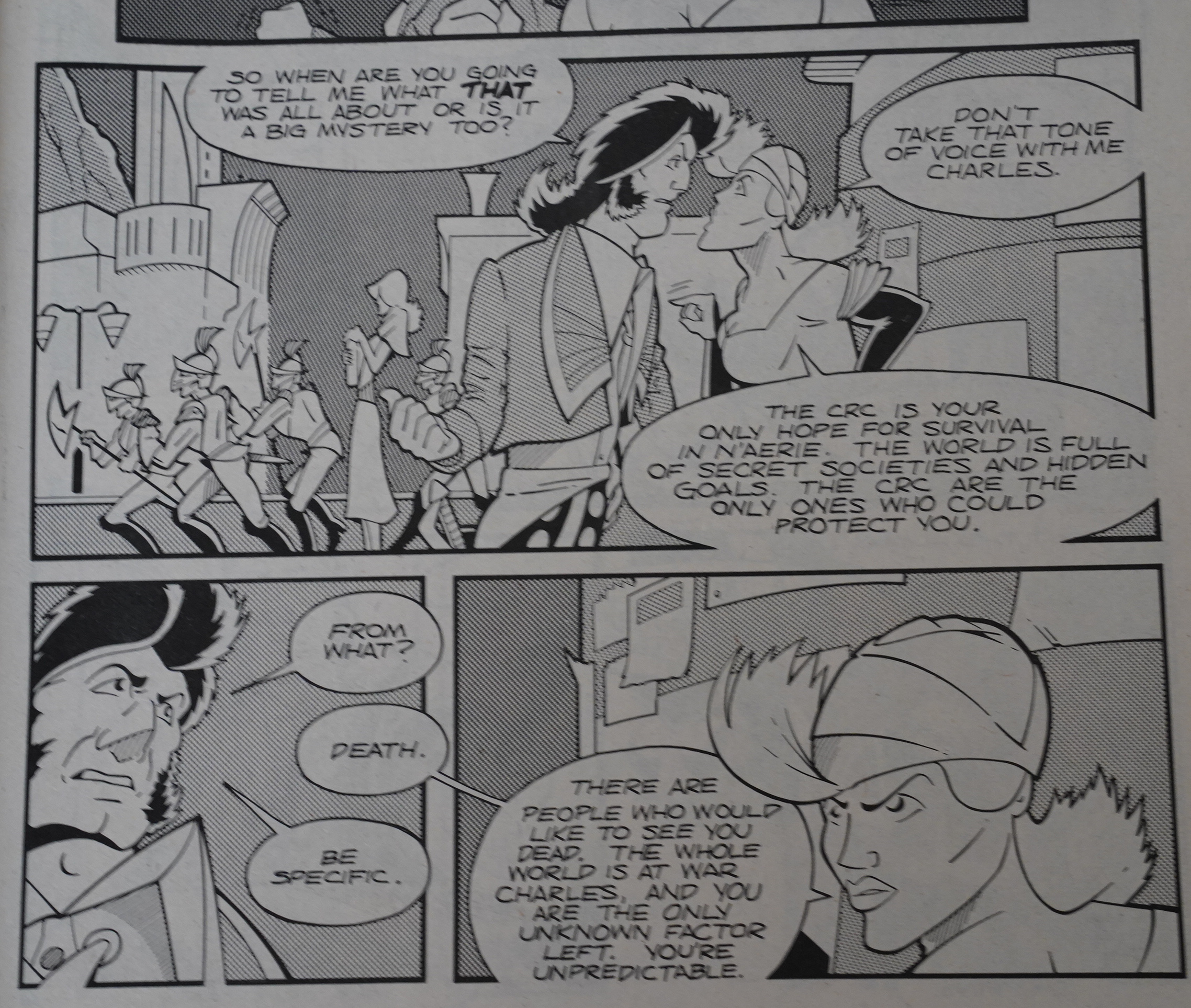 I guess if you’re charitable, you could say that the storytelling and the artwork reflects the state of the protagonist pretty well. He’s confused about the world he’s in, so the reader should be confused, too? 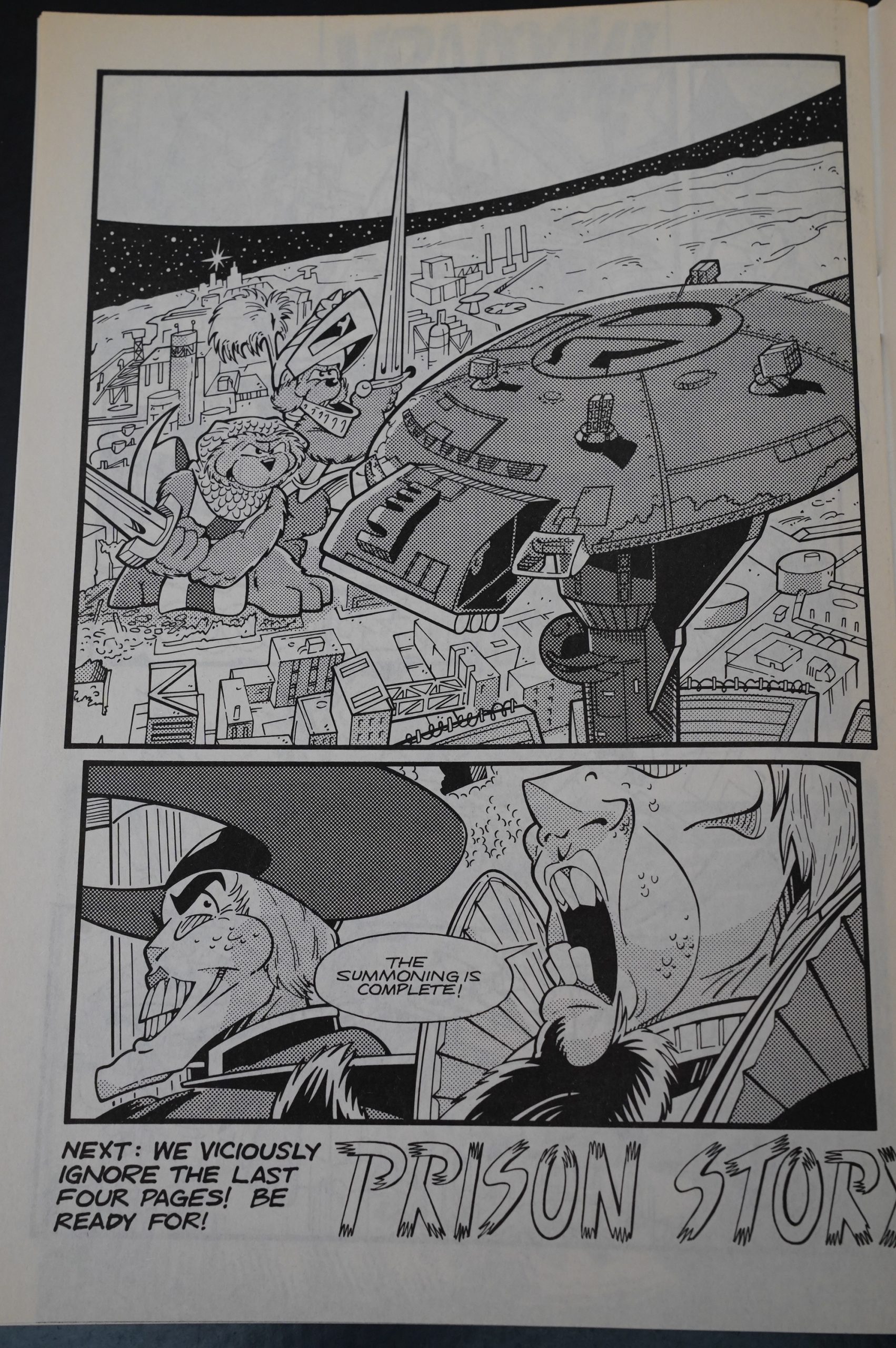 And then… they didn’t really ignore the giant otters in the next issue? 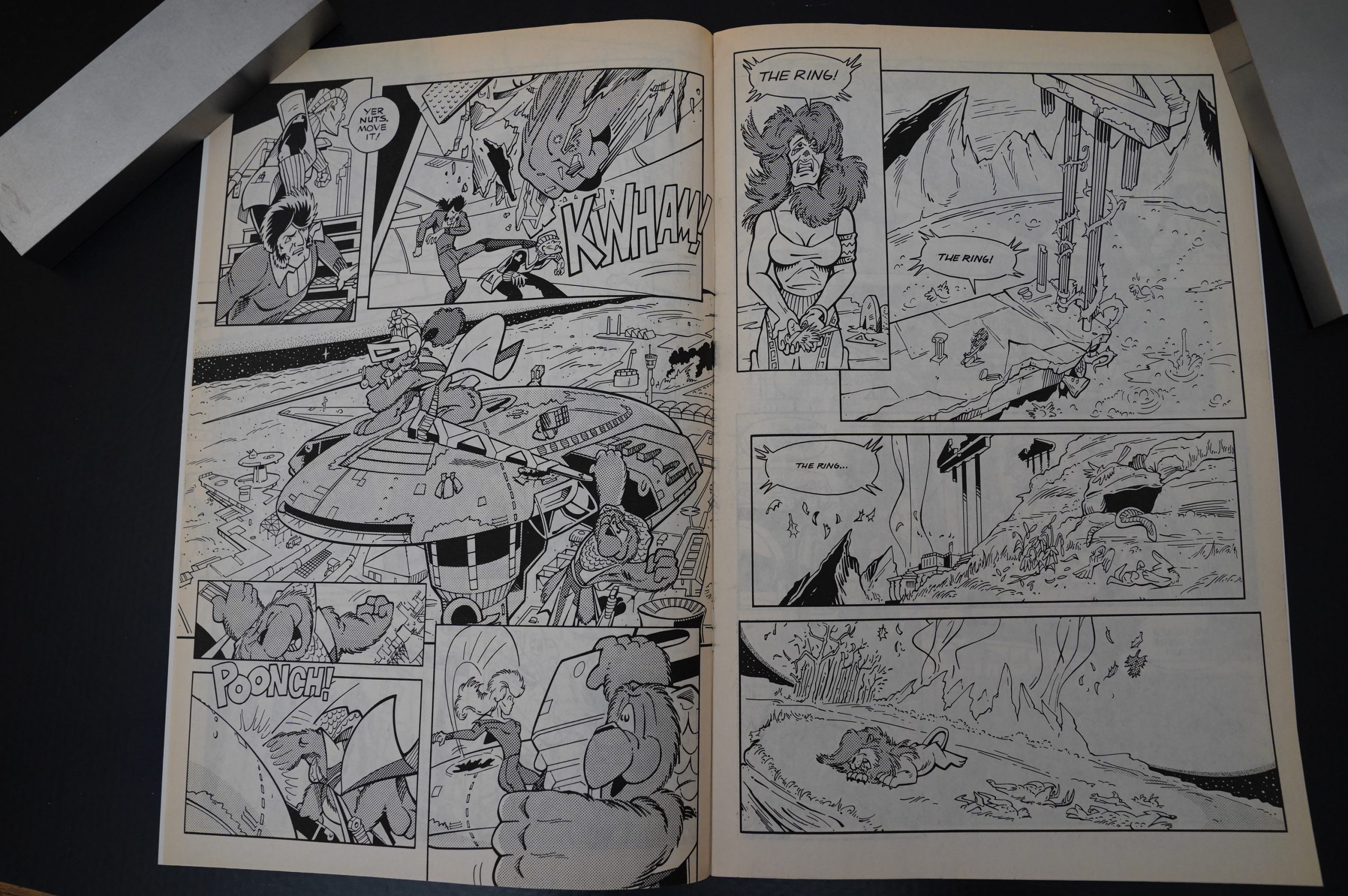 “The ring!”? What? I guess my eyes had glazed over at this point that I even missed there being a ring in here?

Or is it a reference to Tolkien? I mean, just because this comic isn’t funny doesn’t mean that it wasn’t meant to be funny; perhaps I just missed it. 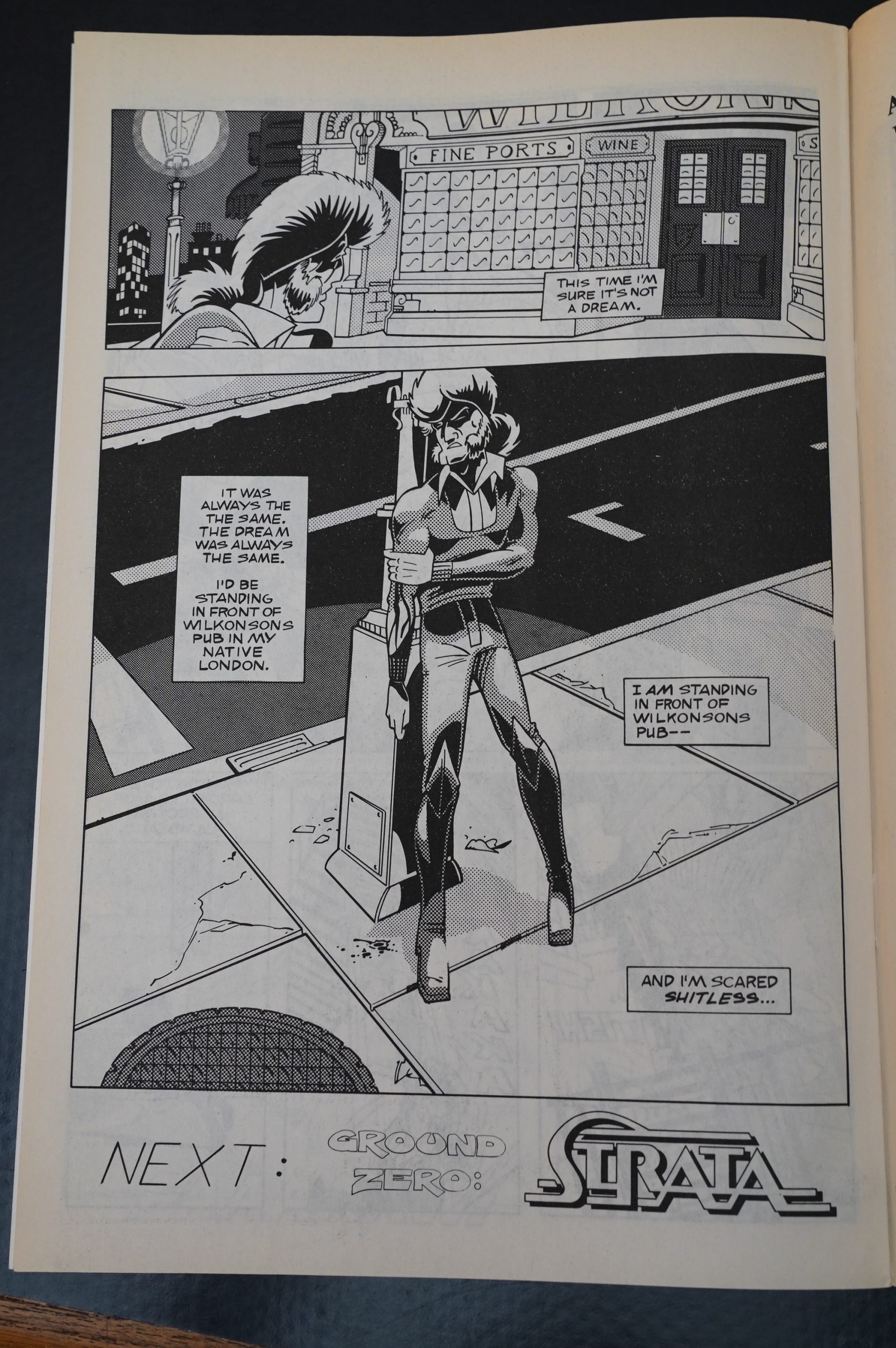 A perfect mess, I guess.

The series wasn’t picked up by a different comics company, so I guess it was just abandoned. It hasn’t been reprinted, either.

Somebody writes in Amazing Heroes #92, page 58:

Strata presents a competently writ-
ten fantasy adventure. Too little time
is spent developing the character of
Flambeau, and too much is devoted
to the slash and stab antics of the
otters. One Bould expect them to be
played as humorous foils to the
human, but there is nothing about
them which is in the slightest bit
amusing. They are simply two talk-
ing animals that don’t have a lick of
sense.
The plot involved—a man is mys-
teriously transported to another
world to which he must tty to adjust
or from which he must try to escape
—is at least as old as the early pulps
(and indeed has antecedents in an-
cient mythology). Still, it is one that
has not been milked completely dry,
and can still be presented effective-
ly. Scripter Joe Judt has done a reas-
onably good job in that department,
though certainly not delivering any-
thing particularly noteworthy or
memorable.
His yeoman-like efforts are com-‘
pletely undermined by the poor
visuals to be found in this issue. It
is a veritable cornucopia of rotten
fruit. The art looks like the work of
a man who learned to draw from
reading old Harvy comics while
dropping acid.
Penciller Ray Murtaugh’s panels
vseren’t laid out on the page so much
as spilled. Each page is a cluttered
jumble of images fighting for atten-
tion but succeeding only in obscur-
ing those around, above and beneath
them. The only uniformity they pre-
sent is in their unattractiveness. The
almost total lack of line work leaves
nothing but sparse black-and-white
illustrations that blend one into the
other.

Harsh! I have no idea what “almost total lack of line work” means. It’s nothing but line work. Oh, they mean cross-hatching? Sure.

Strata could become delightfully Car-
rotoid with only a slight push. It’s a serio•
comic space opera, less richly detåiled than
Nexus, but in that same zany vein. The art
is almost there. Ray Murtaugh’s engaging
pencils have a nearly Burdenesque loopi-
ness; I liked his wild biplanes and his
spaceships that look like, well, watermelons
being gang-banged (you have to see these
things to believe ’em), and his Commander
D’art could be Lady Luck’s Peecolo caught
in a time warp. I wish his hero didn’t 100k
so much like something out of Mike Ploog,
but that’s a quibble. This is good, fresh
work.
I would prescribe a dose of Burden for Joe
Judt, the’ writer, however. There’s a scene
where the lovely lady space ranger throws
herself at the hero and he demurs, saying,
“l don’t love you,” and goes into a song and
dance about having to feel “something
magical.” This bit just begs to be played as
an absurd, Burdenesque vaudeville duet for
skewed egos. Instead, Judt treats his char-
acterS as rational beings, albeit With a touch
of humor. Strata is fun, but it isn’t as inven-
tive as the best books in its field. A judicious
dose of brain dama#, evenly applied, would
help.

Flambeau also finds that having
ones dreams come true isn’t all beer
and skitties. “He’s a very ethical and
morat guy.” says Judt, “and he’s sud-
denly tossed into a world where every-
thing he beiieves and thinks is no longer
true. Nothing is realty as it seems in this
world: nothing is as it seems in this
book. Even it you think you know what
it’s really about. that maynot be true
“There”lbe a iot of swashbuckling.
and a lot of bad jokes. I try to keep
ttyngs as insane as I possibly can!’

Well, that bit was achieved…

I’m unable to find anybody discussing Strata on the interwebs. Joe Judt doesn’t seem to have done anything in comics after this, but Murtaugh seems to be working in comics still, and so is Brozman.