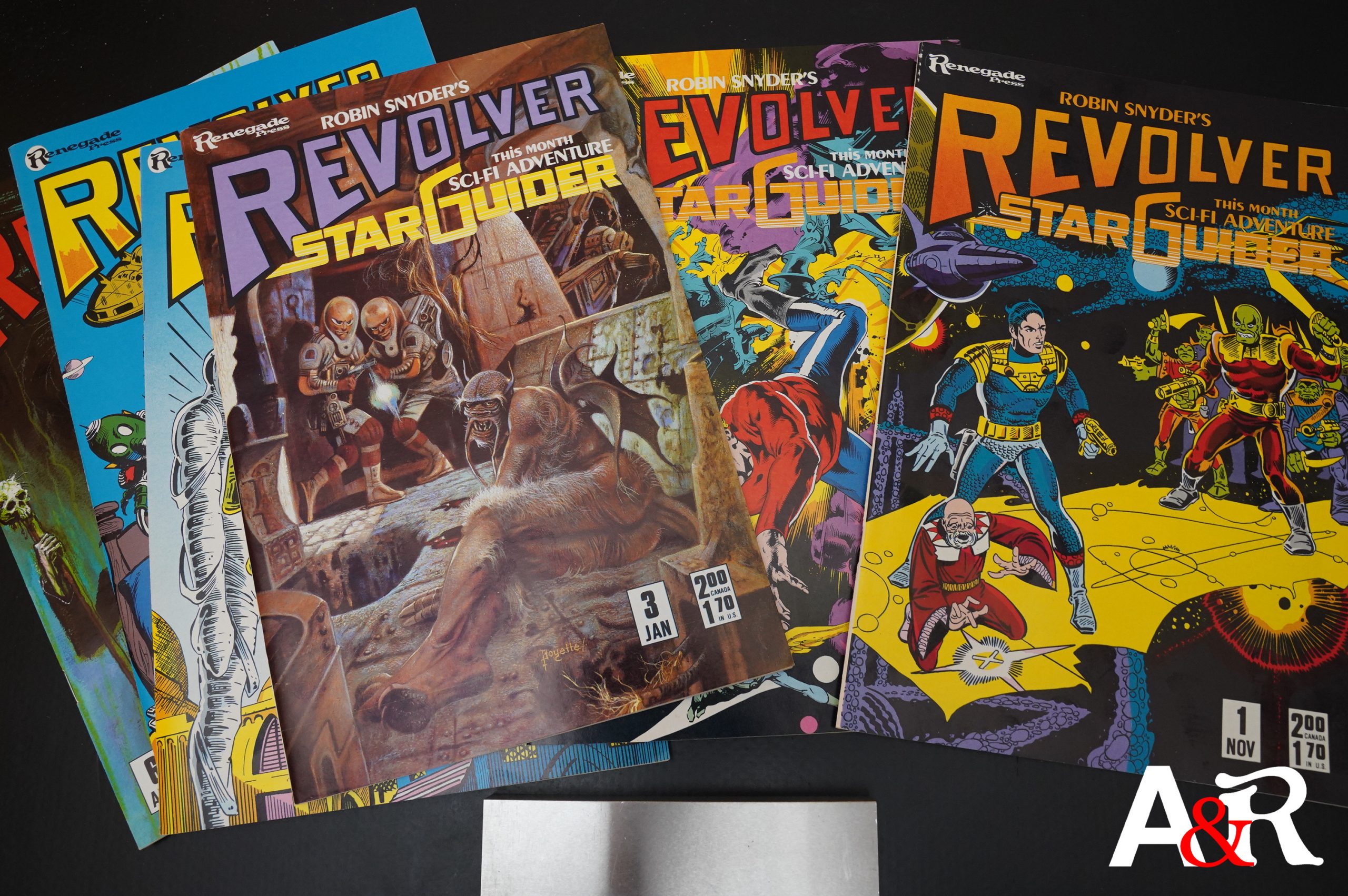 Deni Loubert says in the introduction to this anthology that she’s not much of a fan of anthologies. Myself, I love anthologies: Every issue is an opportunity to surprise and delight the readers with something new and unexpected.

But I understand why many people shy away from anthologies: Since they don’t sell much, many of them (and especially the non “art comics” oriented ones) devolve into the editor calling around to friends and acquaintances asking “do you have any crap in a cupboard somewhere I could use? I mean, unseen works of great art?”

Let’s see what kind of anthology this is. 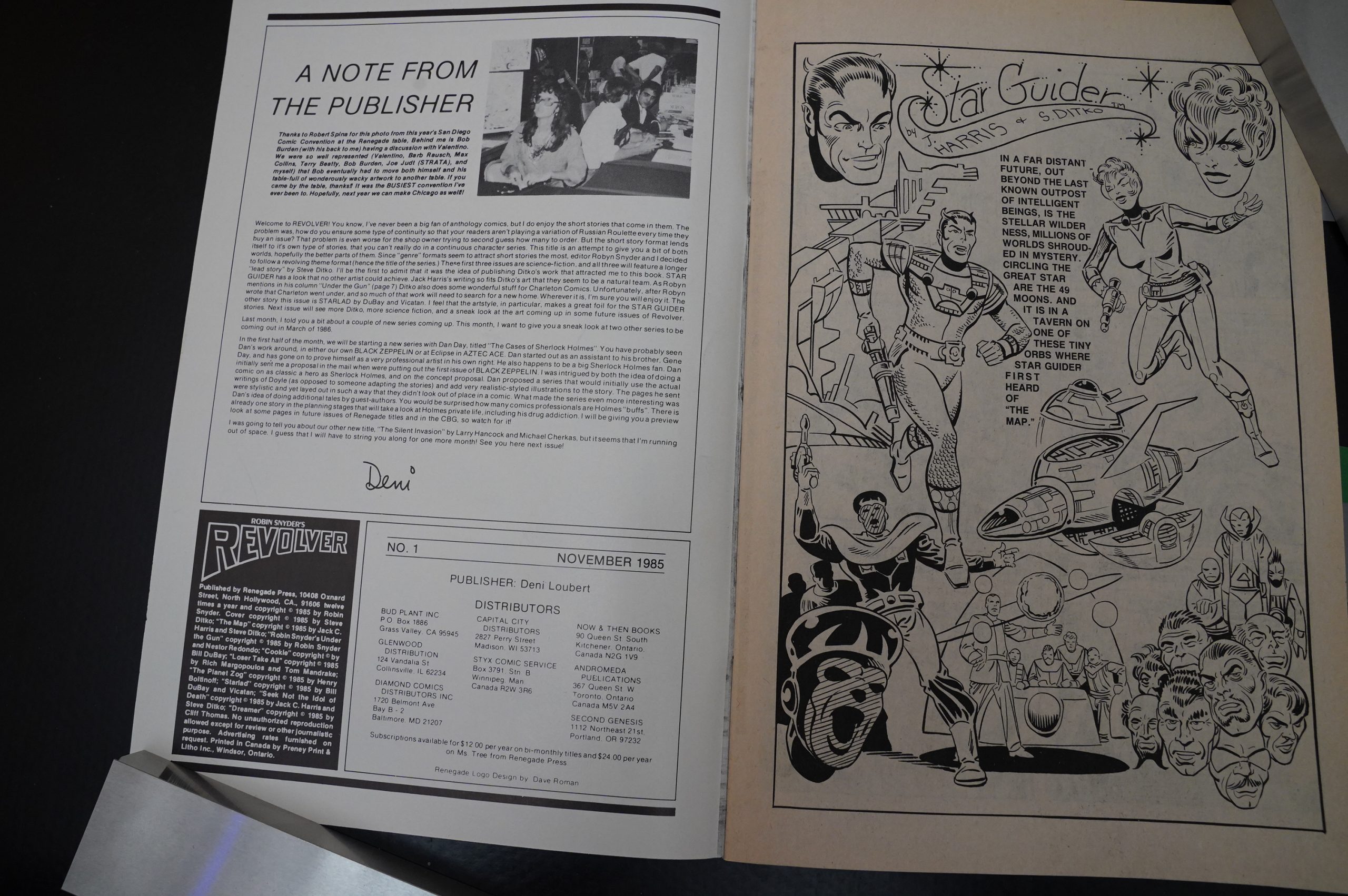 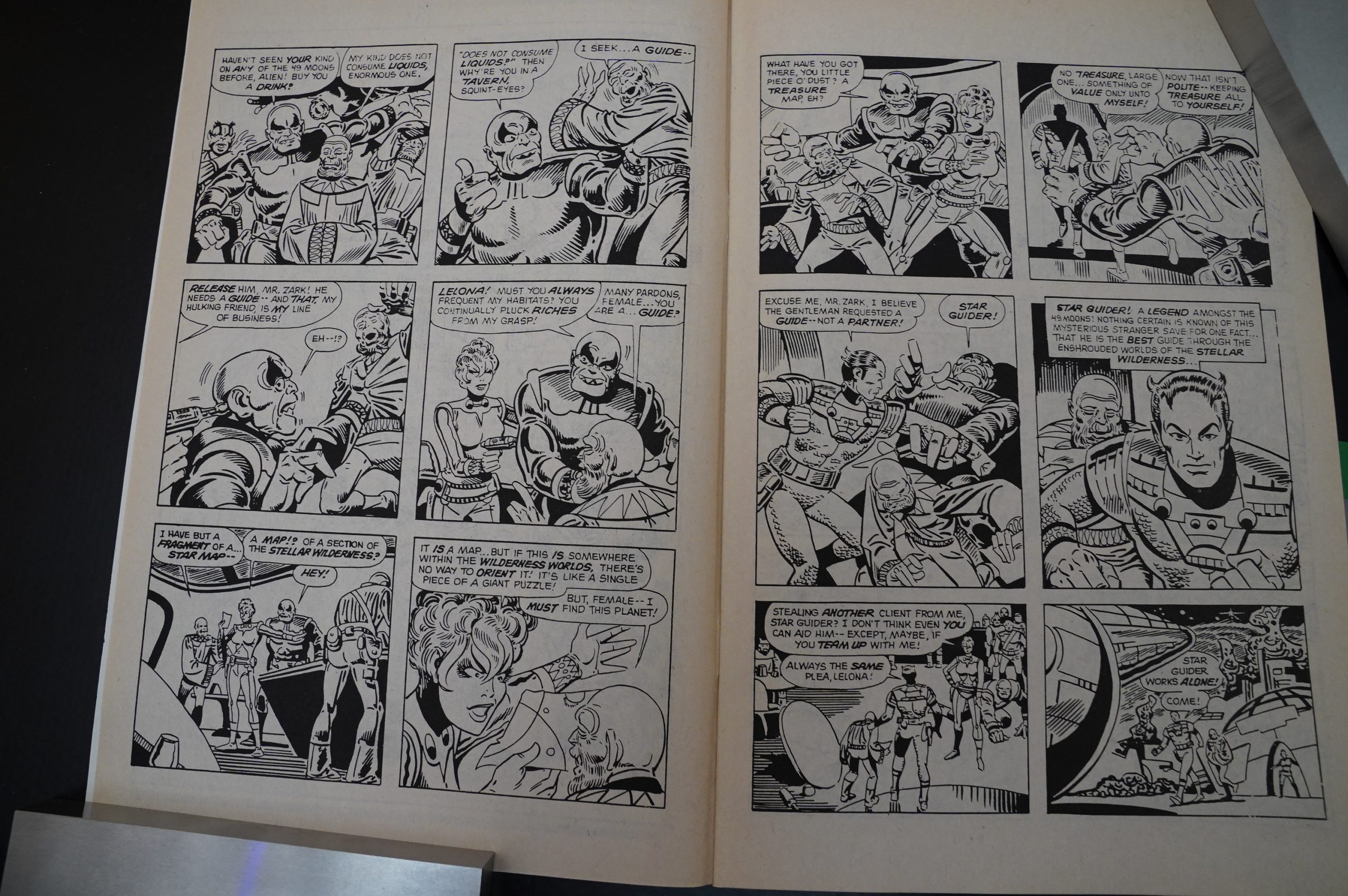 Loubert says in the introduction that they want to have some kind of consistency, so there’s gonna be a long Ditko story in each issue, as well as a bunch of shorter stories. And that’s a pretty good idea, structurally.

The “Star Guider” serial (by Jack C Harris and Steve Ditko) has to have the lamest title ever… it’s about a guy who’s … a guide … to the … OK, he’s a tracker or something.

The pages are drawn in a magazine form factor, so I guess this was originally meant for some other magazine?

The reproduction is pretty horrible at points — looks like it’s been shot from bad xeroxes? 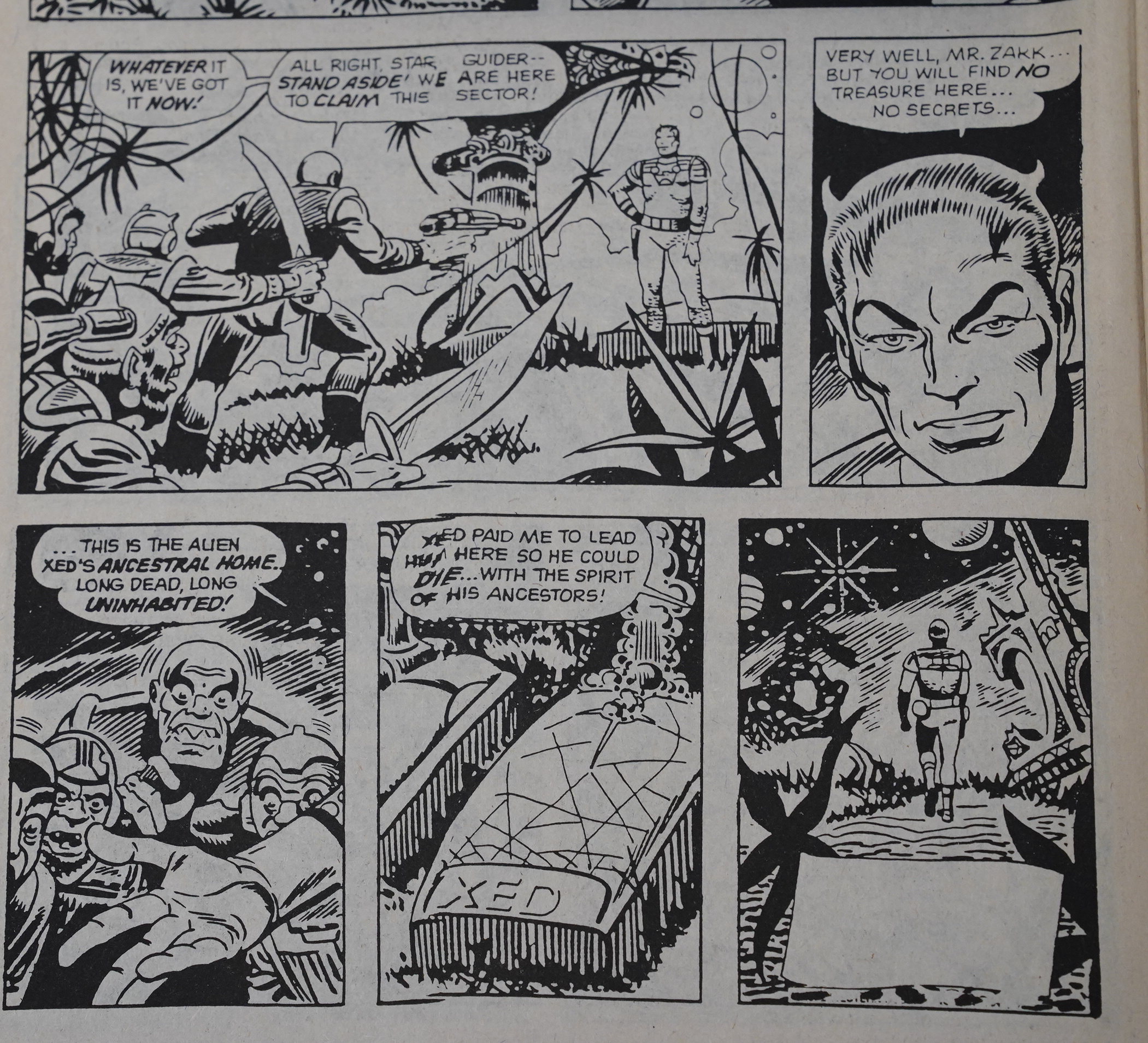 The ending is a standard twist ending, and a blank box under Star Guider as he walks off into… the… moonset. I’m guessing that box had some text about the next issue/story, but was scrubbed when this story was repurposed for Revolver? 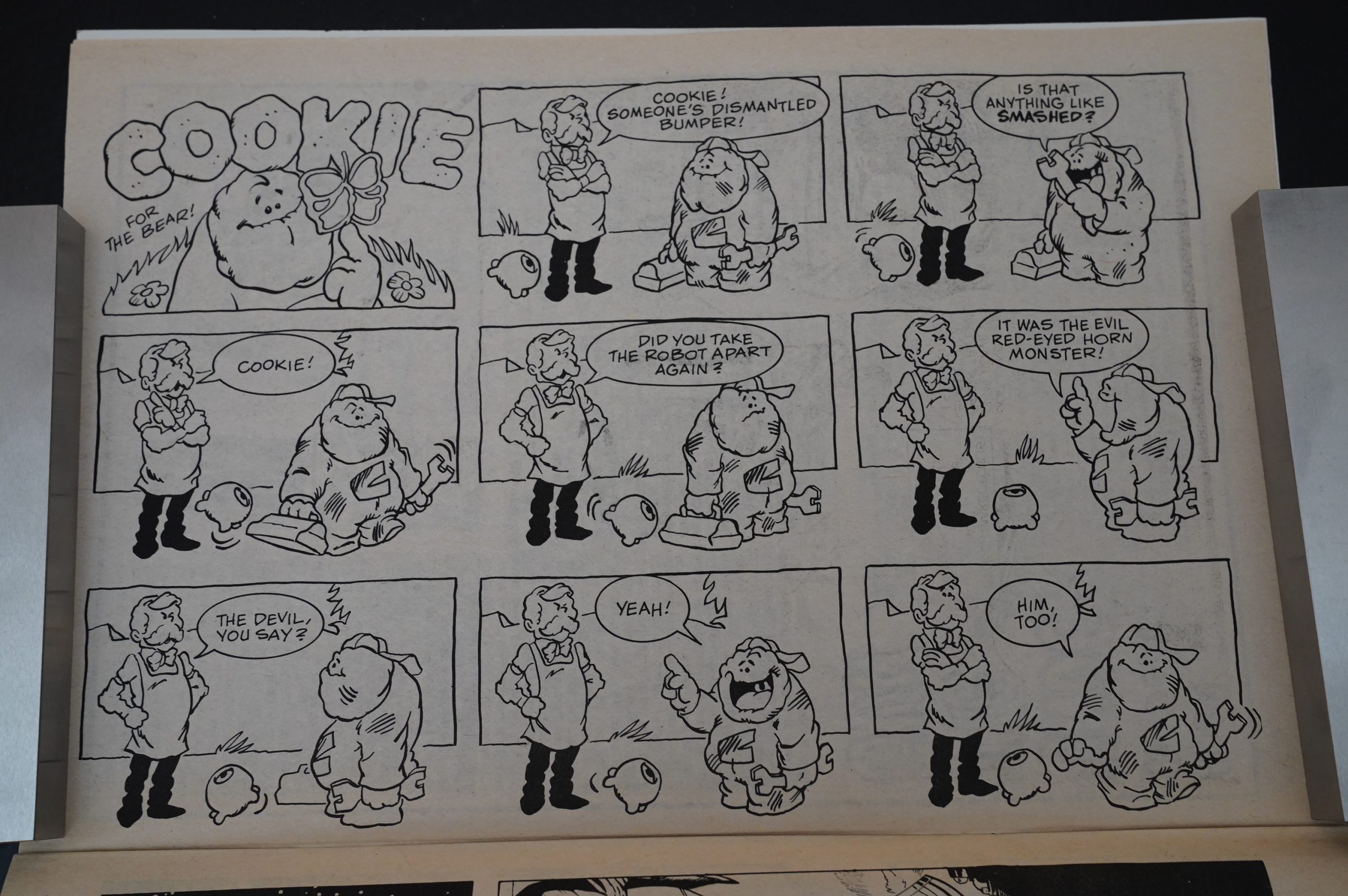 Annoyingly enough, the stories mostly don’t have credits. Everybody’s mentioned in the indicia, so this is by Bill DuBay, I guess? It’s… it’s a joke, I guess? (Explainer: “The devil[,] you say” can mean both “I don’t really believe you” and “was it the devil”. You’re welcome.)

It’s a tonal whip lash from the very serious Star Guider story, though. Rich Margopoulis and Tom Mandrake do perhaps the stupidest story here, but at least the monsters look good. The lettering is by “the Joe Kubert School”, so perhaps they were also students there? It reads like a story from a teenager. 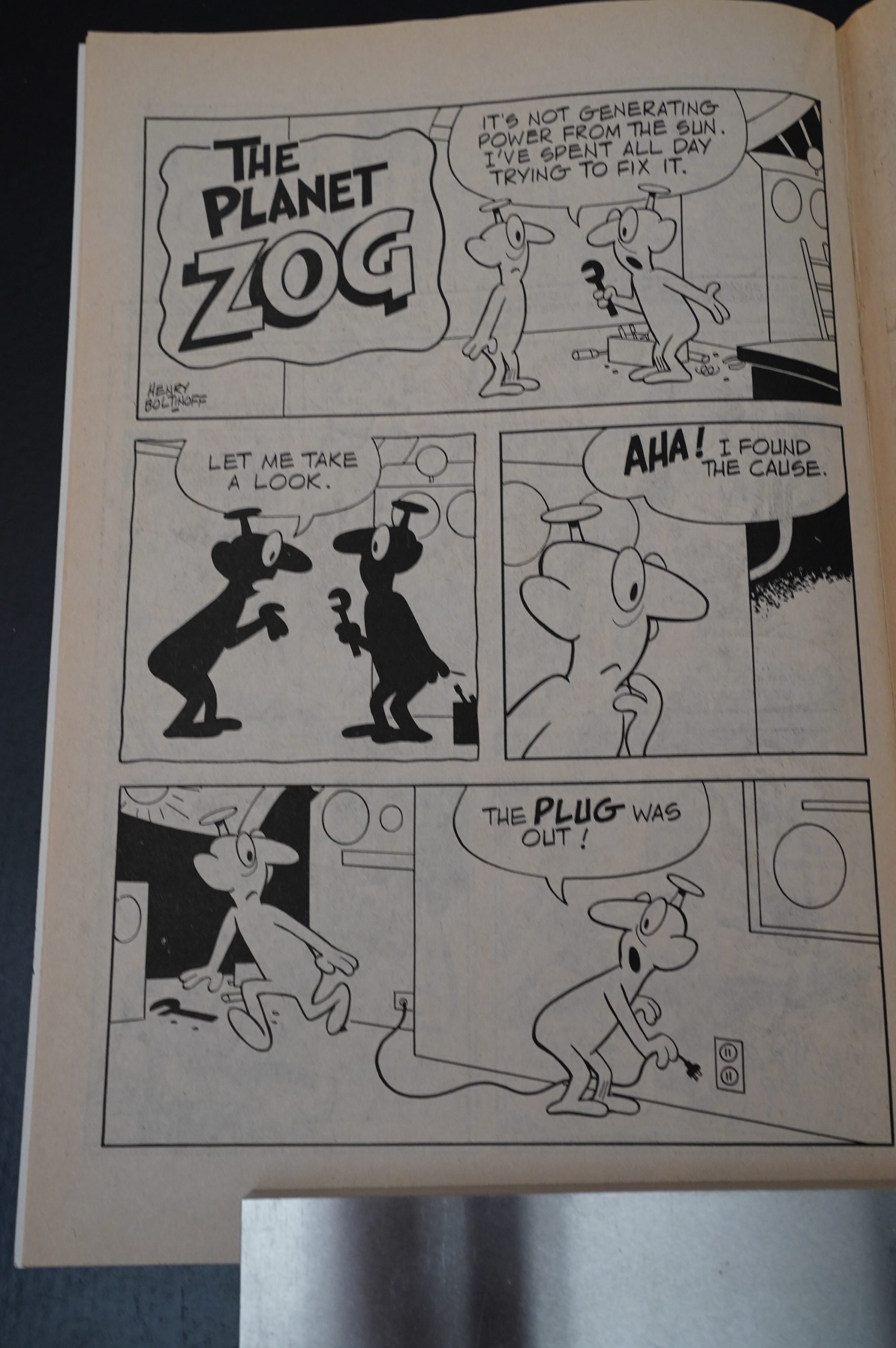 Henry Boltinoff contributes a… I’m gonna go ahead and call it a joke. 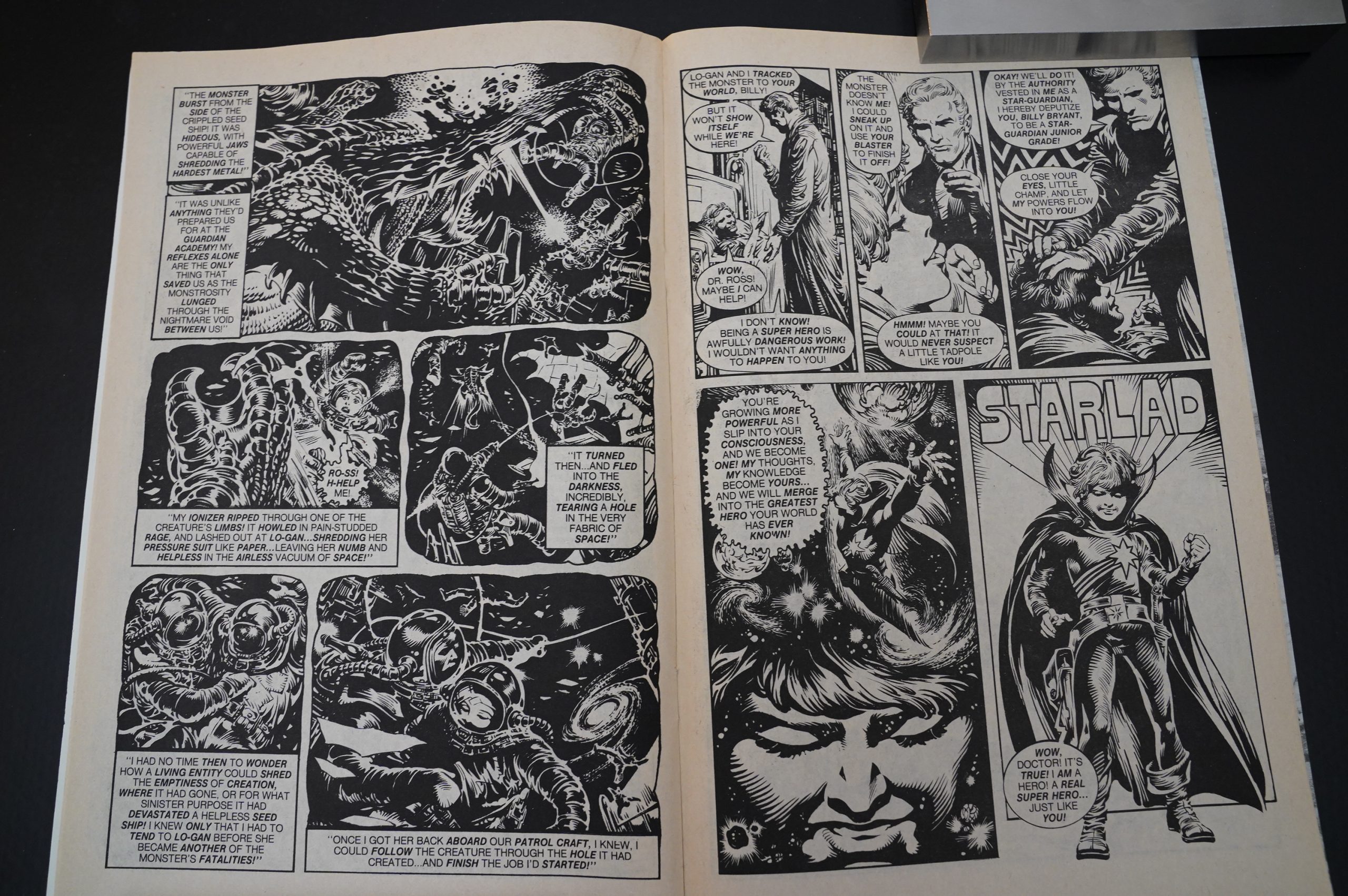 Bill DuBay and Vicatan do a story that’s pretty standard, and in this company, that makes it stand out. I mean, it’s something you could see being published in an actual professional magazine. 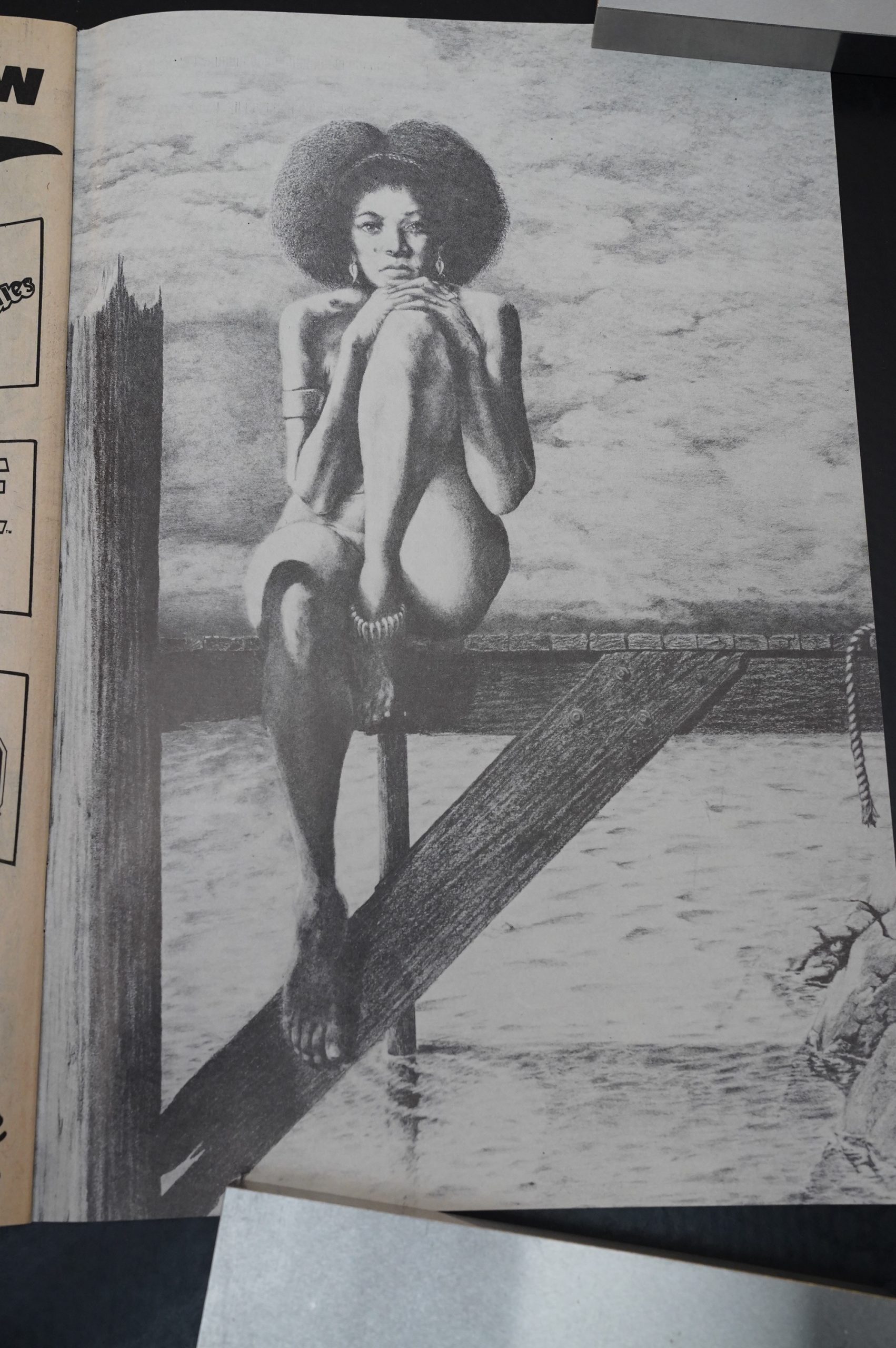 This may or may not be by Cliff Thomas, and is very sci fi.

With expectations properly adjusted, perhaps the rest of the issues will be more fun to read. I mean, I’m not morally opposed to fanzines or anything.

At least Ditko’s artwork is fun to look at. 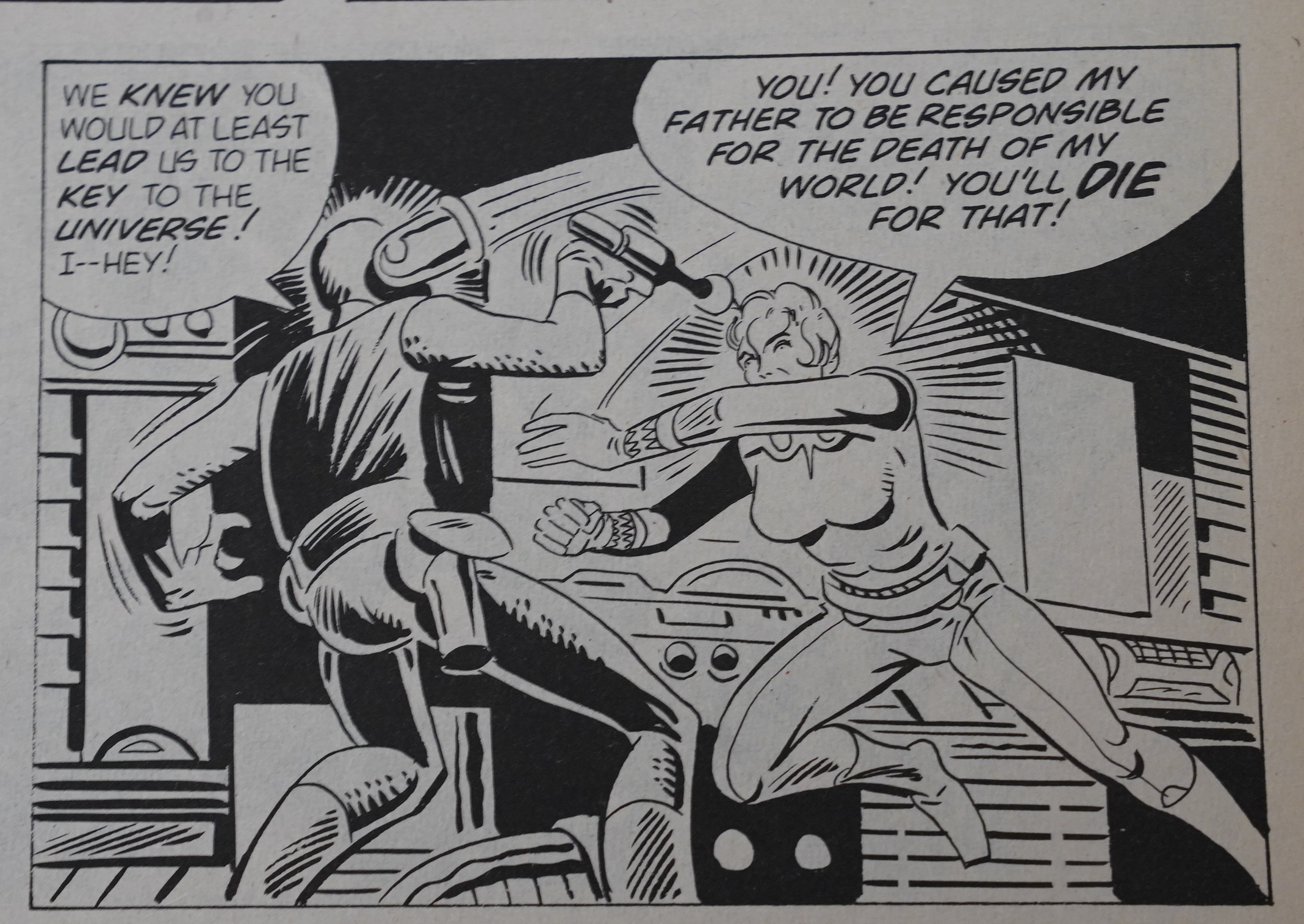 And this is the last appearance of Star Guider. Perhaps Ditko couldn’t take the moral ambiguity of that utterance: “You caused my father to be responsible for the death of my world!” Caused him to be responsible… That’s more like A=A’, isn’t it? 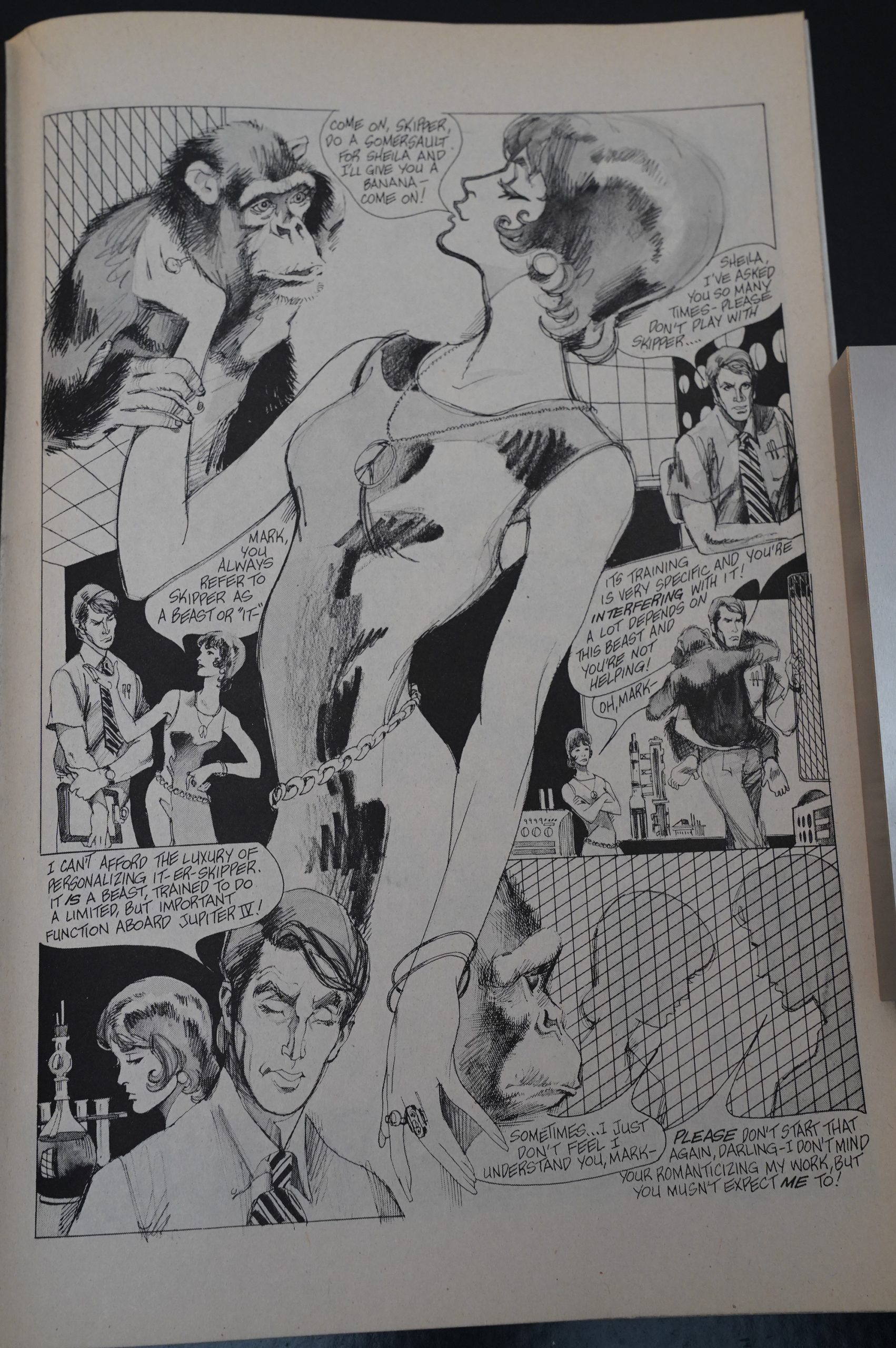 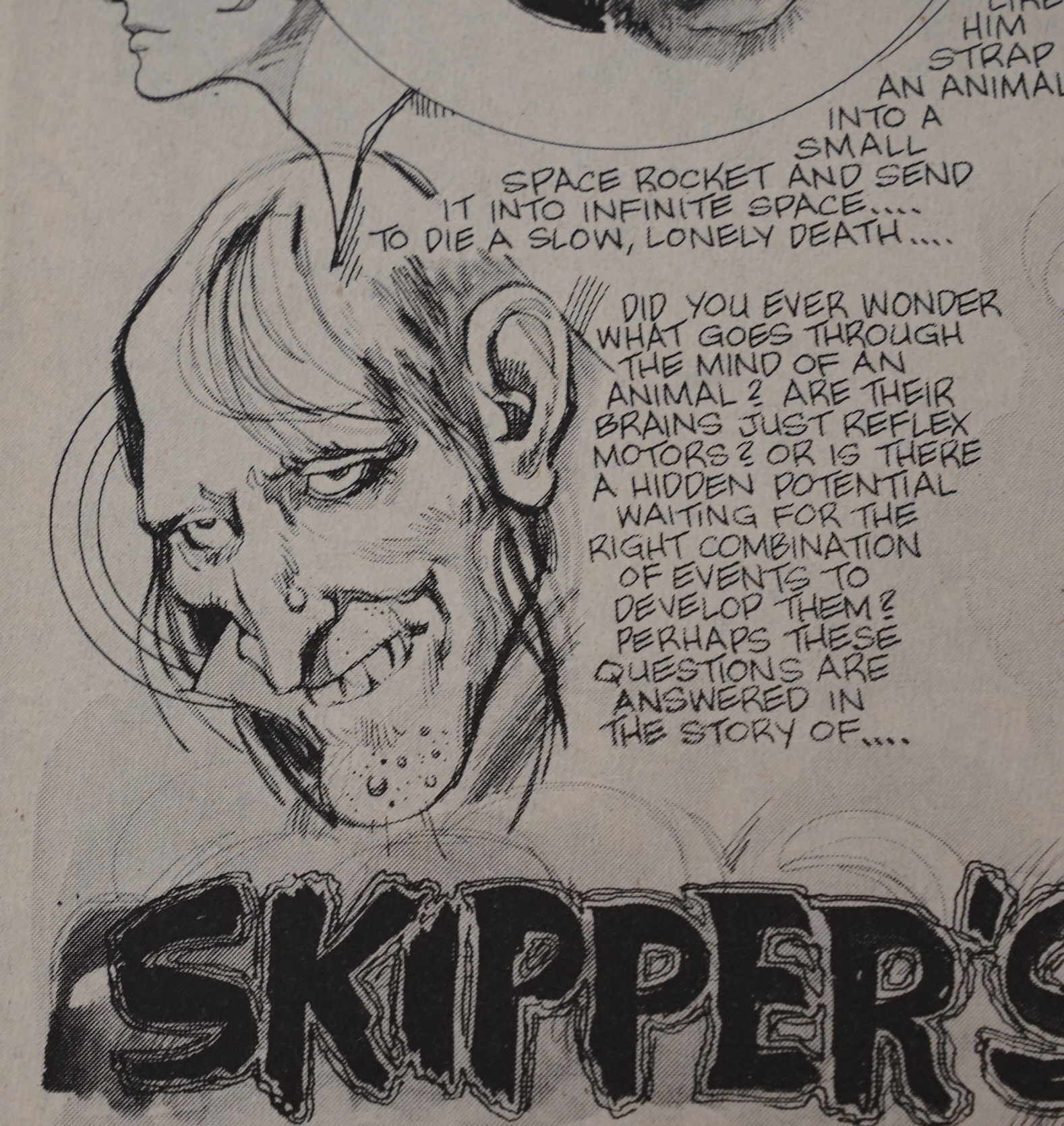 And there’s a … crypt keeper kinda guy in here? I guess this was made for some other anthology. 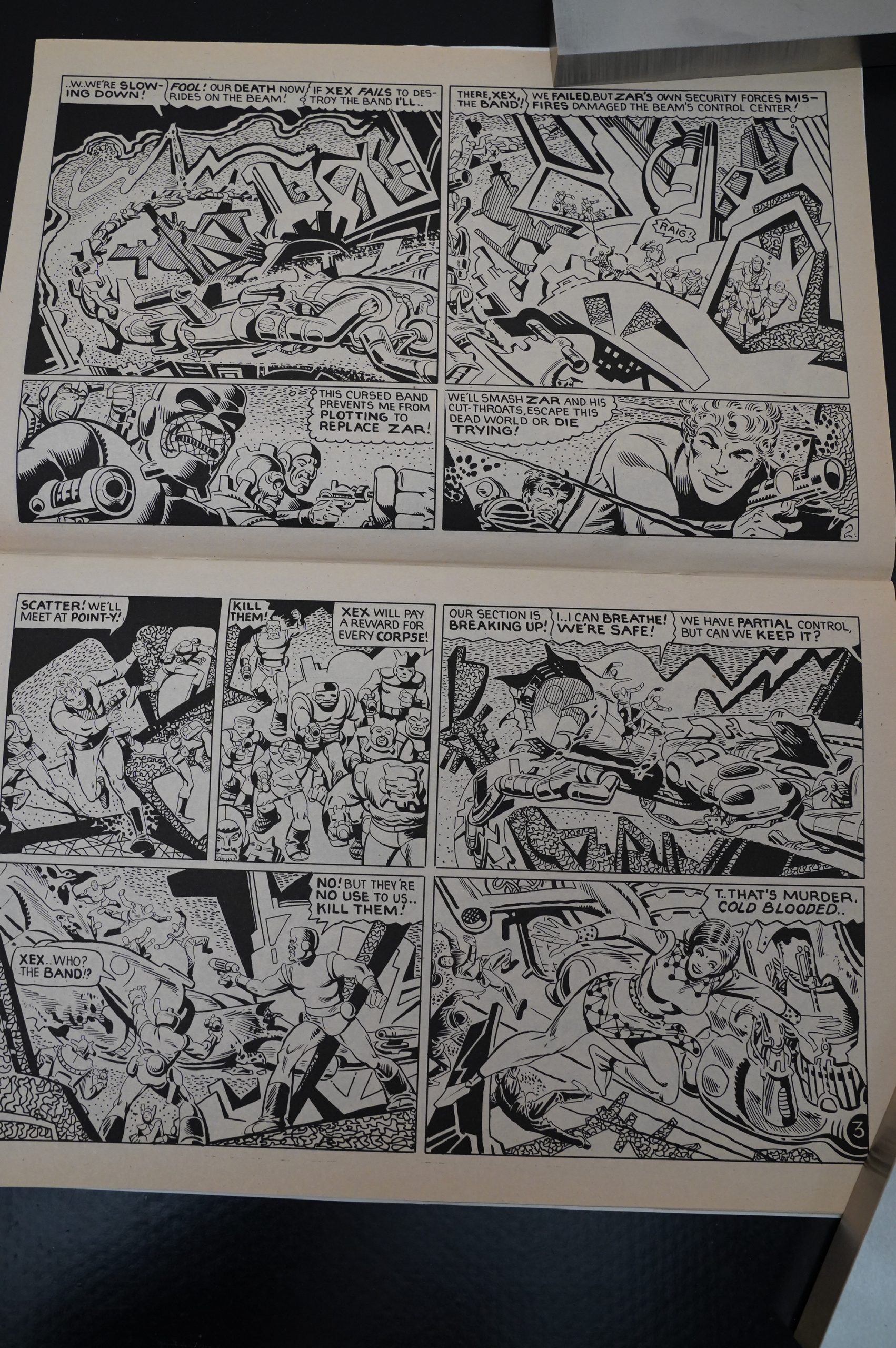 In the third issue, there’s no Star Guider (even if the cover proudly announces “STAR GUIDER”), but insted we get a pretty wacky Ditko story. Love those patterns. 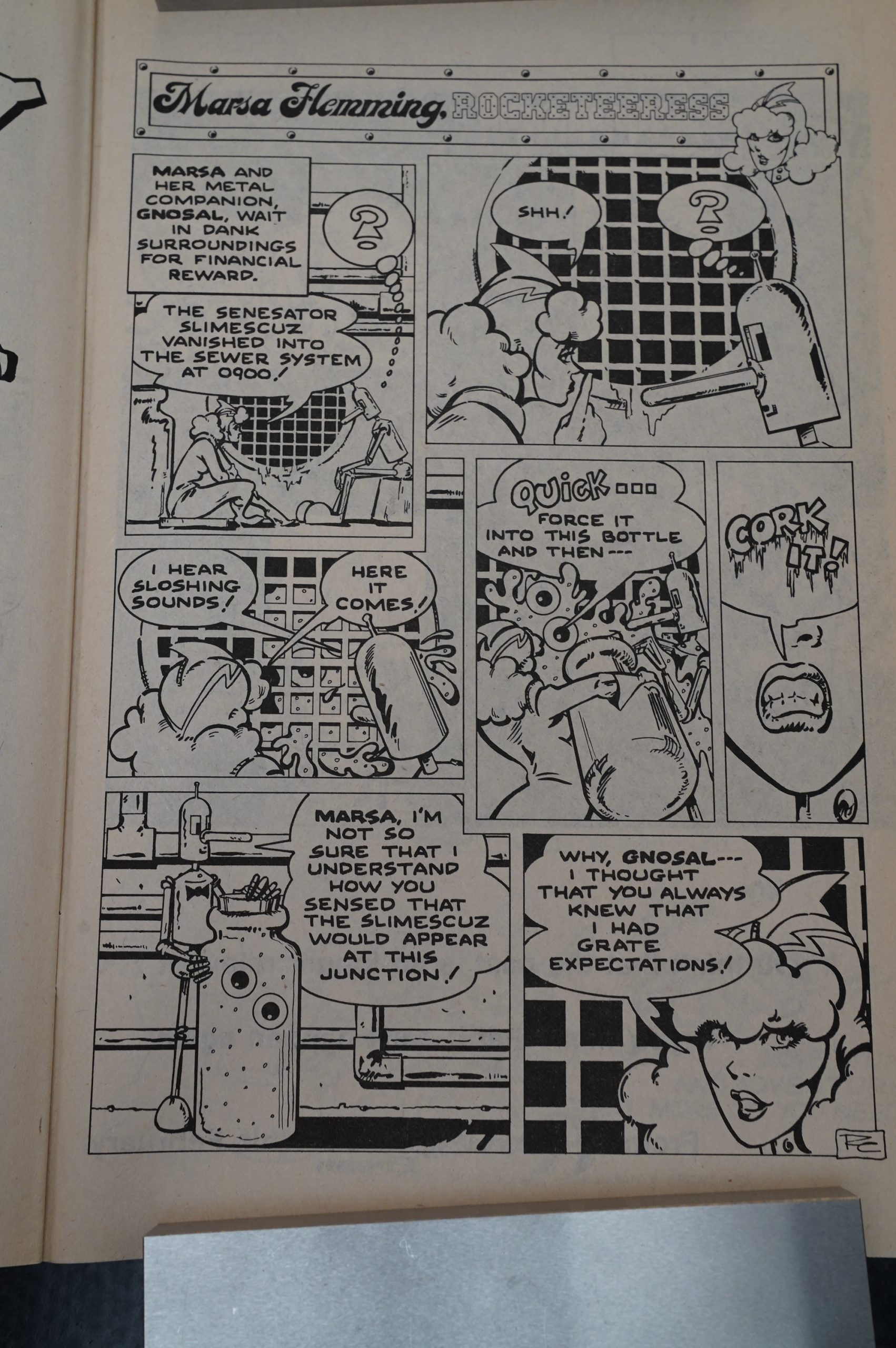 Grate expectations… This is the best page from Richard Connolly. I swear! It is! The other ones were even worse! 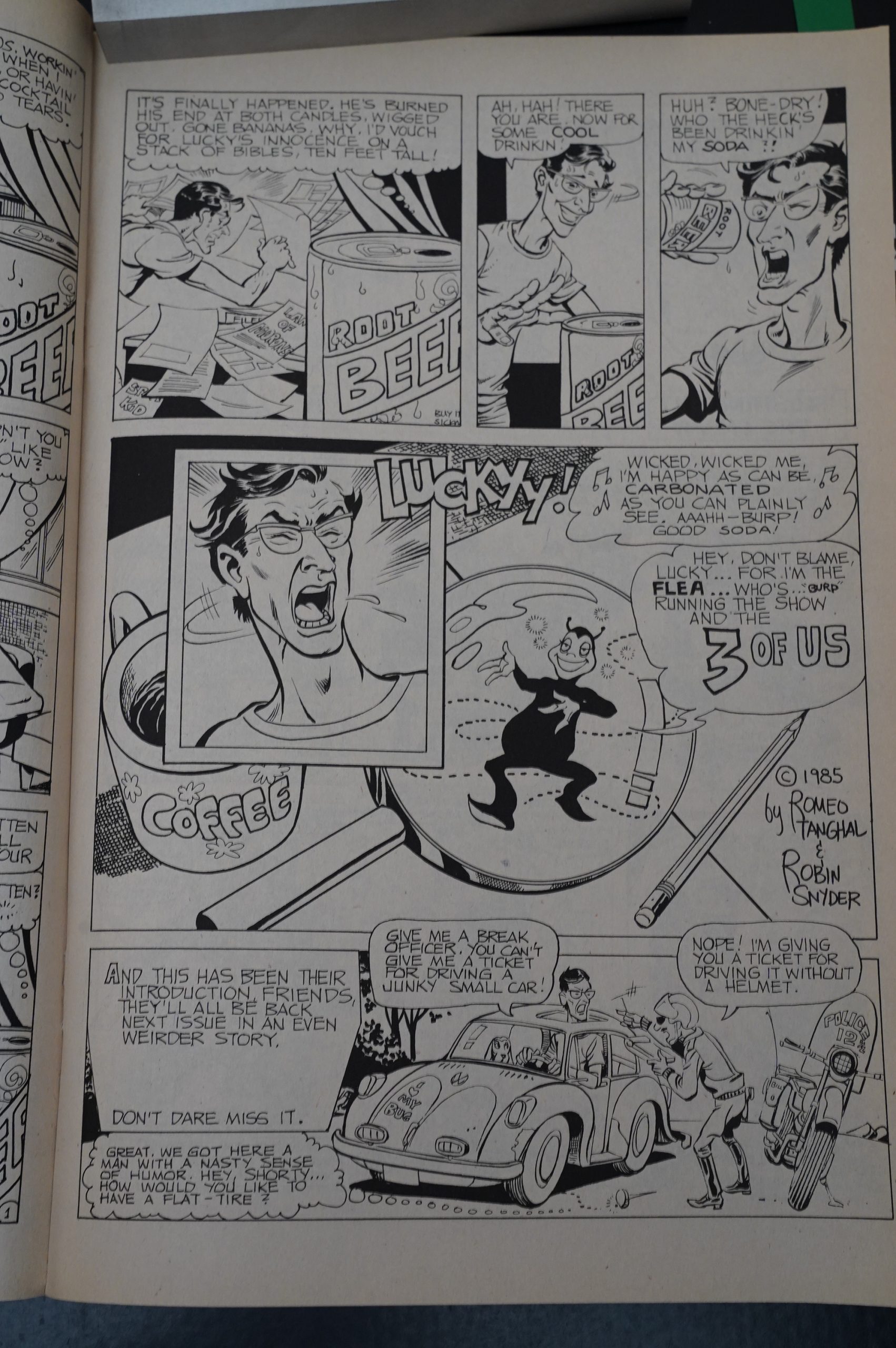 We get this random two page story by Romeo Tangal and Robin Snyder, and are promised that they’ll be back next issue. They aren’t. 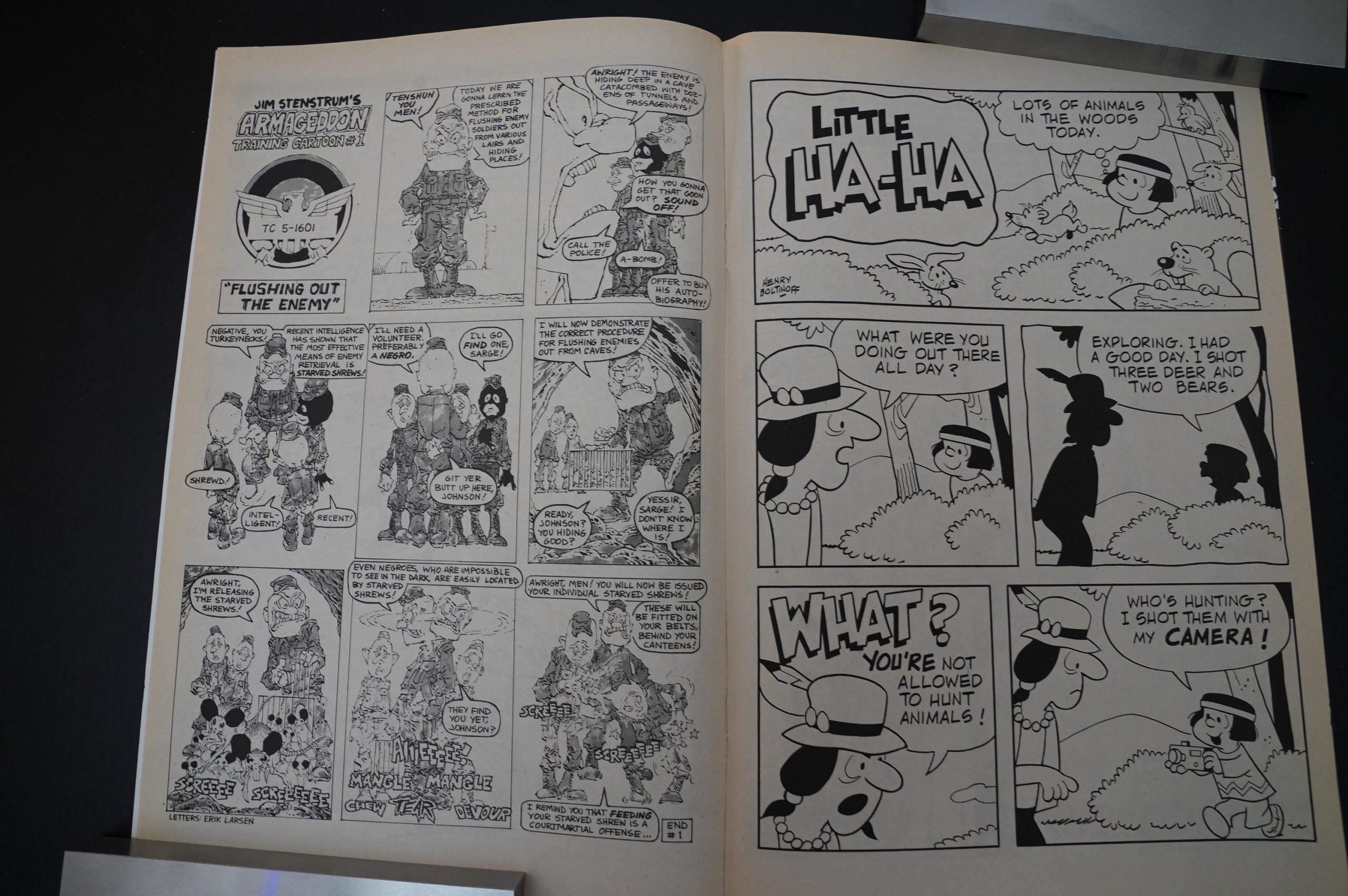 This magazine is such a grab bag of randomness that it’s almost enough to flip me from “what the fuck” to “what the fuck? Interesting!”

On the left, we have a joke (by Jim Stenstrum) which derives the humour from that military guy killing a black soldier.

On the right, we have another Henry Boltinoff piece, which derives its humour from All Mort Walker Comic Strips Ever. Only more obvious. 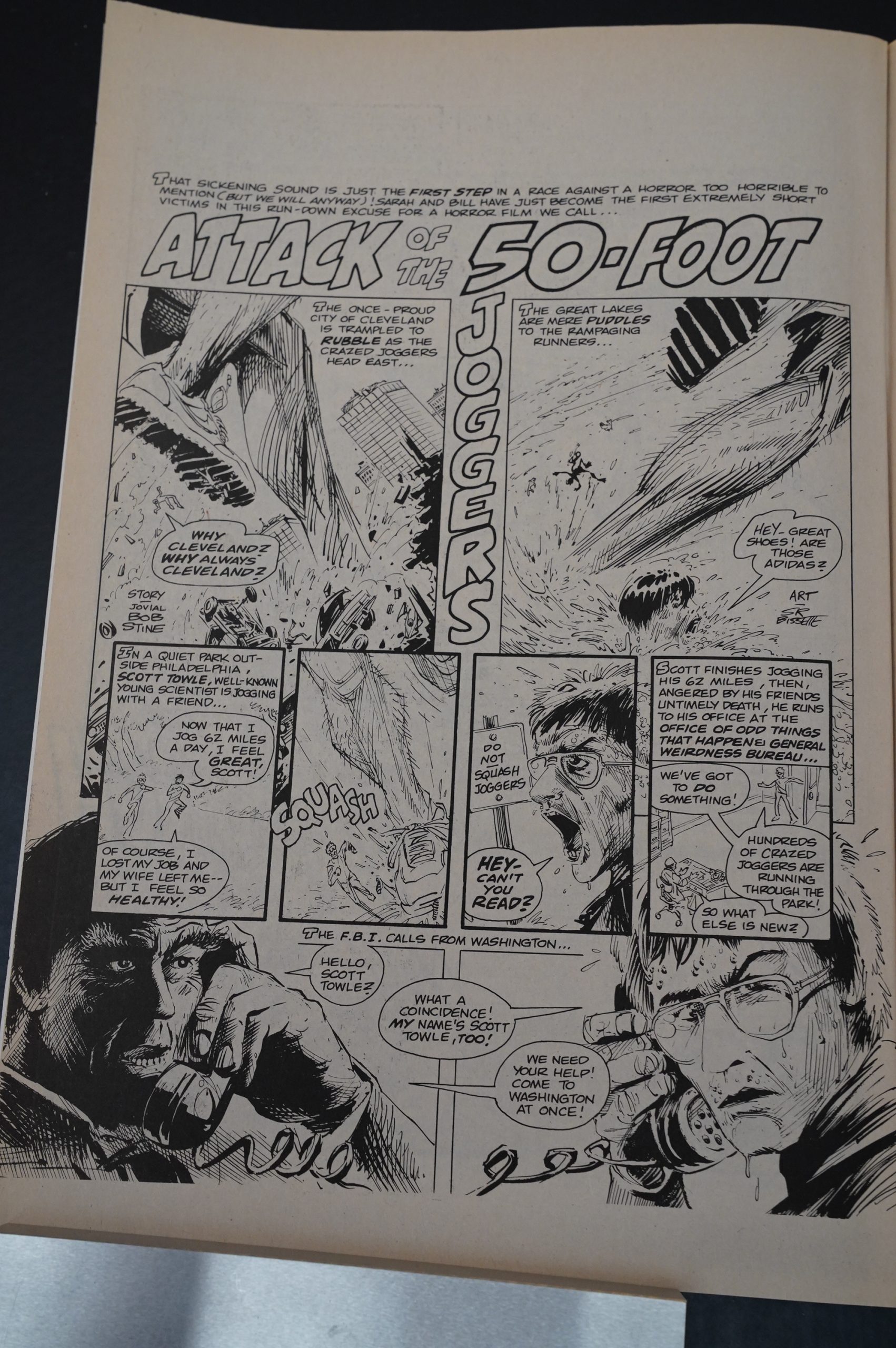 The only thing here that’s actually good is this thing by Steven Bissette and Bob Stine (from the late 70s). Unfortunately, it’s been reprinted a bunch of places before (and probably after). 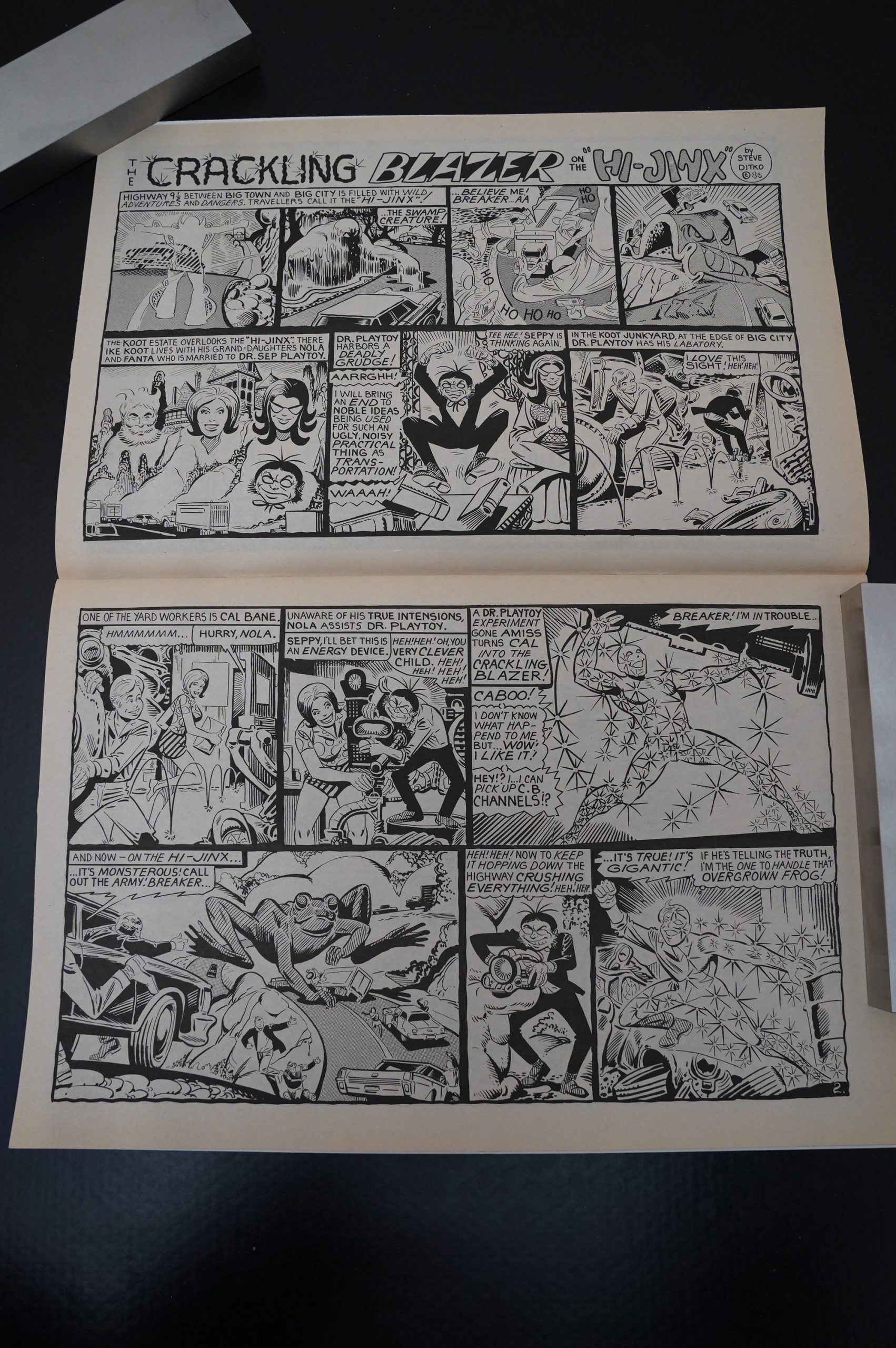 In the fifth issue, we get 20 pages of a proposed Ditko strip that was meant for a defunct magazine. It’s utterly incomprehensible, but you can’t argue with the manic energy. We also get character info… about characters like that living highway… 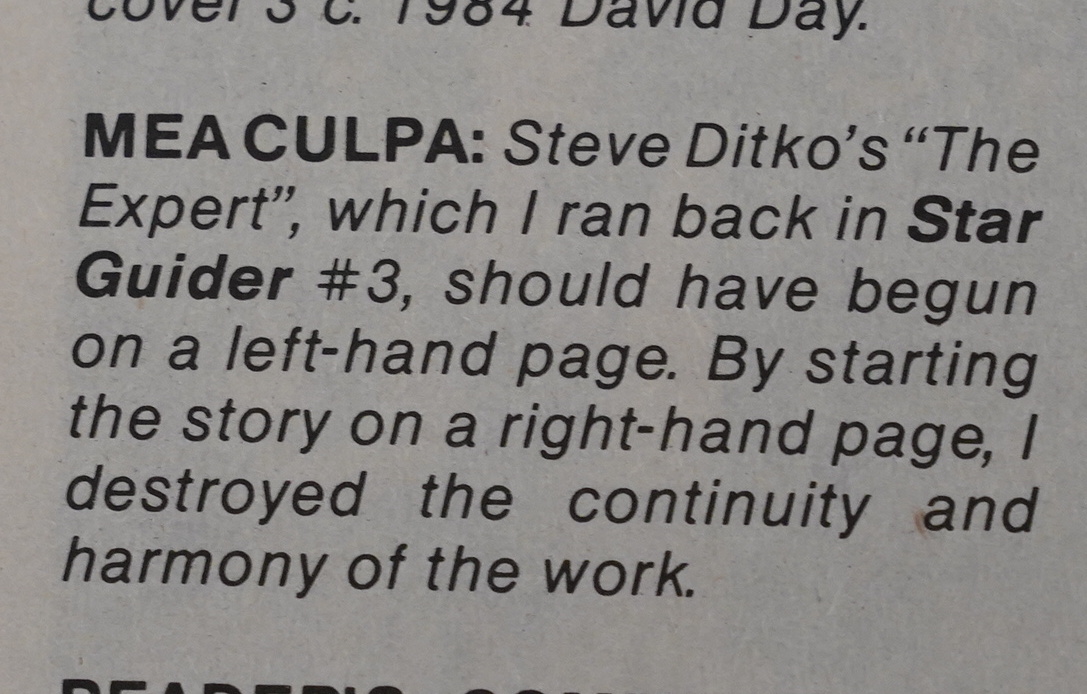 Ah. That explains why that Ditko thing in the third issue was odd. Even on a Ditko scale. Perhaps. 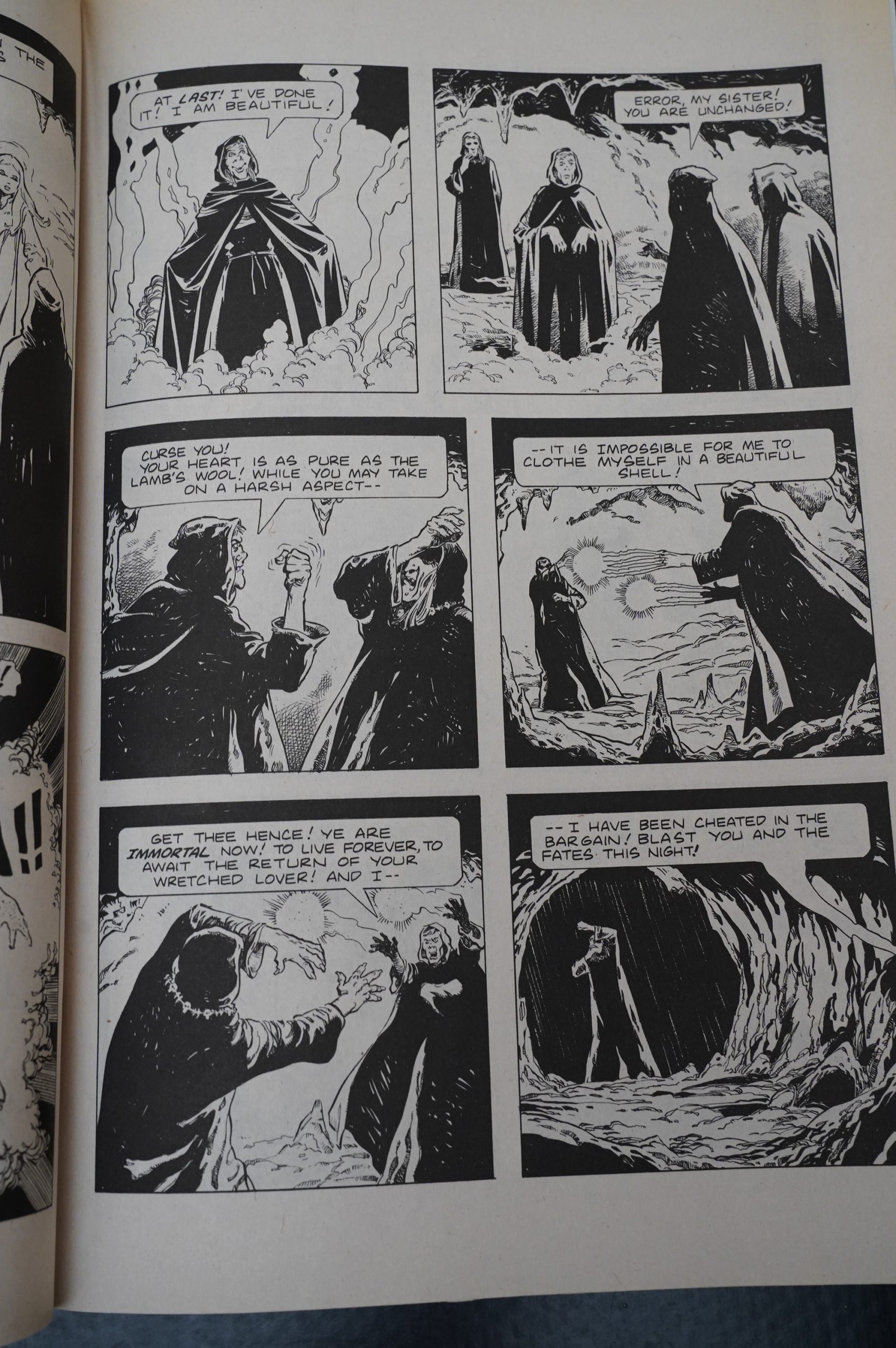 The final issue is dominated by this story by Robin Snyder and Adolfo Buylla. It’s really bad, but the artwork is professional. 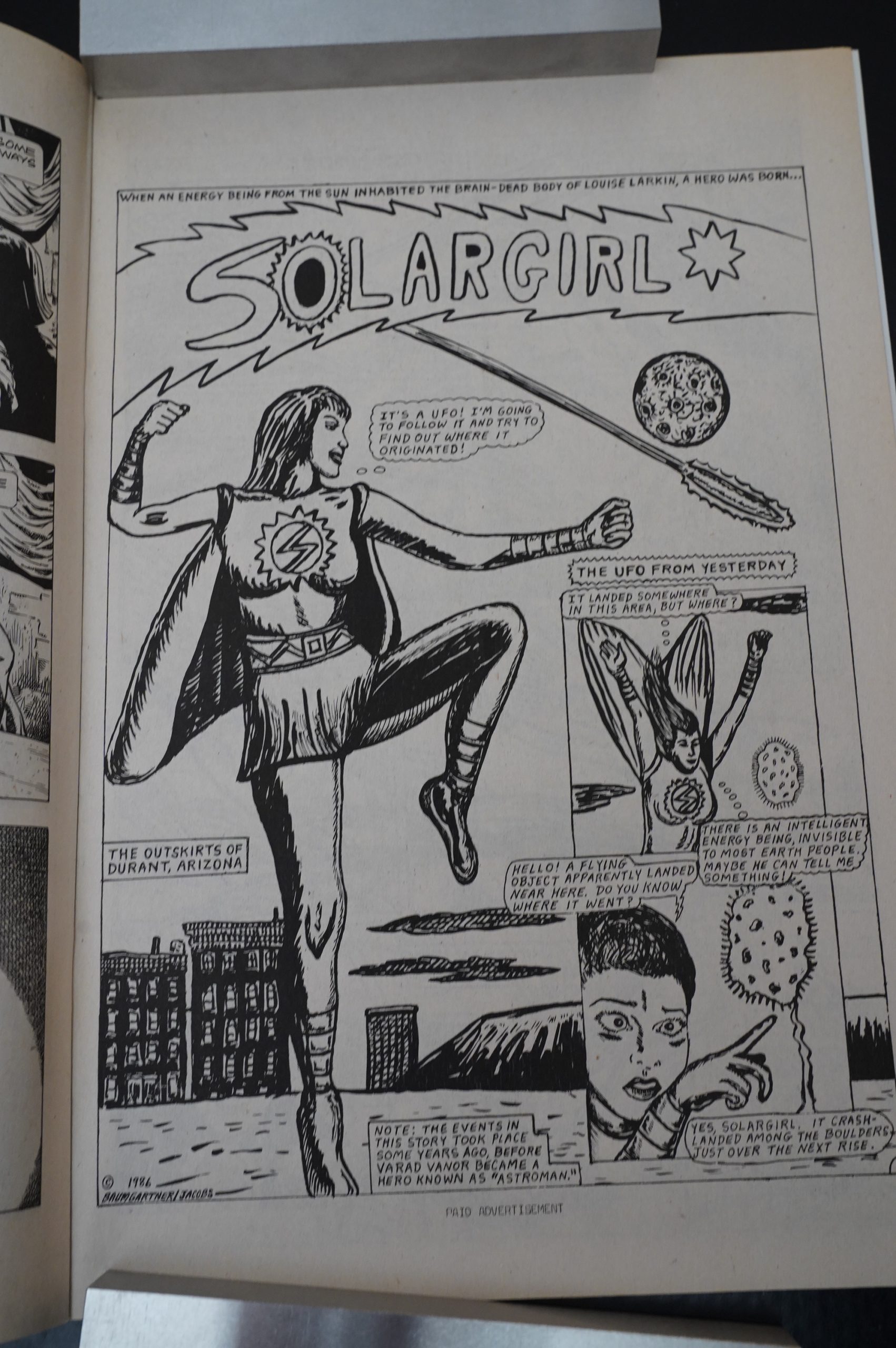 Padding out the issue, we get a three page ad comic (!?): Solargirl, which looks like it was done by teenagers? 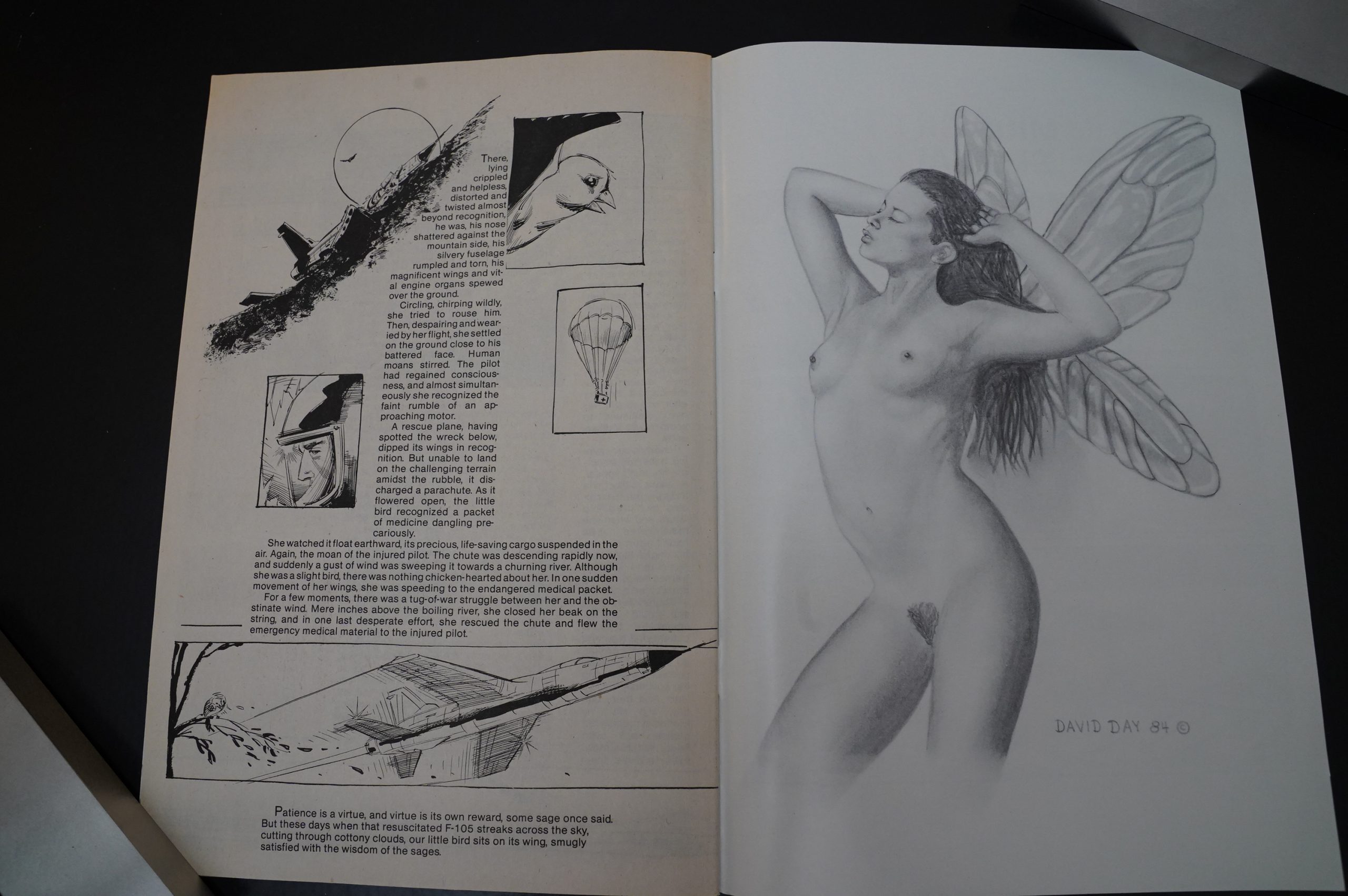 And then a kinda strange text piece, and then a pin-up.

That’s it. Revolver over…

Or is it? Nope: They dropped the name from the cover, but the Revolver series continues in Static and Murder, before ending with the Revolver Annual. I meant to cover the entire series in one blog post, but I really can’t face reading the rest of it right now, so I’ll just split it up.

Revolver is the newest addition to the
Renegade Press line-up of black-and-
white cornics. An anthology title, its
contents appear to have been
plucked from inventory shelves all
over the place. All of them should
have been left in storage.

That’s it. No conflict, no drama—-
no point. In both story and visual
look, this could have passed for one
of those silly s-f TV series of the ’50s.
The biggest kick for me, reading a
rough photoqtat review copy, was the
story’s final caption that had yet to
be remowd–such being necessi-
tated by its message that the reader
could look forward to seeing another
adventure of Star Guide in “the next
issue of… Astral Frontier!” That and
the feel the qtory almost make one
suspect thiq story had originally been
intended for one of Charlton’s old
science fiction fantasy books of 1.5
years past.
Indeed, every feature preqented
here seems to haw been culled from
other companies’ leftovers. There’s
ewn a oneoage gag strip by Murrary
Boltinoff that looks like it came right
from d DC comic of the 1960s.
Representing the “New Tdlent
Showcase” school, vee have a story
by Rich Margopoulos and Tom Man-
drake, entitled “Marshal of the
Zodiåc.” Simon Marshal, a space
wayfarer, is engaged in a champione
ghip card game with his former
friend and partner, Shawn O’Brien.
Marshal attempts to cheat by use of
a telepathic implant dnd a robot who
is monitoring his opponent’s hand.
O’Brien wins despite this—thus prov-
ing that he was cheating. That was
what Marshdl was trying to prove; at
least he managed to convince a jury
I have my
that vvas his intention.
doubts. This story is mon more point-
less than the Star Guider tale.
The next offering is called “Star-
lad.” VVhile it is uncredited, the art
dppears to haw been supplied by the
Redondo Studio. Coupled with a ref-
erence to the Rook, the original
market for thie tale would appear to
have been one of the Warren maga-
zines (and possibly points to Bill
DuBay as the scripter).

This book is simply dreadful from
beginning to end. To put it another
way—if Revolver was loaded with
live ammo, it would probably blow
up in your face. Avoid it.

I usually disagree with everything R A Jones writes, so this seriously makes me reconsider my take on Revolver: Perhaps it was kinda brilliant? Perhaps?

This series has apparently never been reprinted, and I’m unable to find any reviews of it on the intertubes.