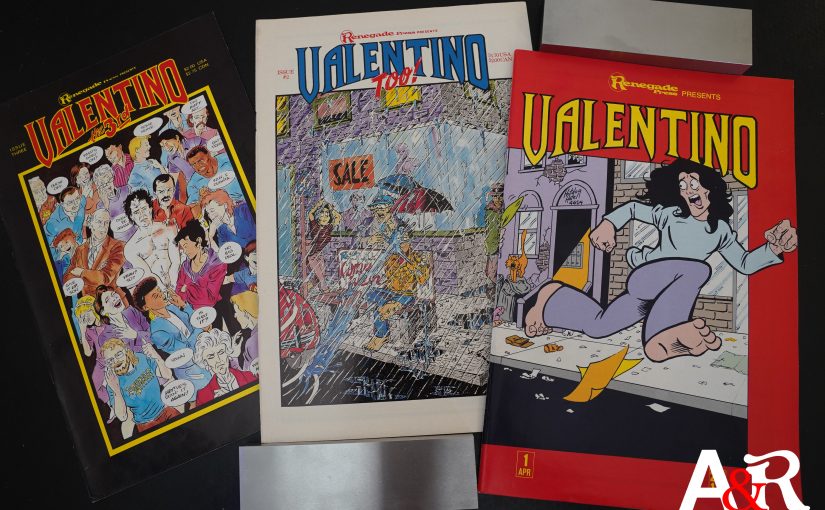 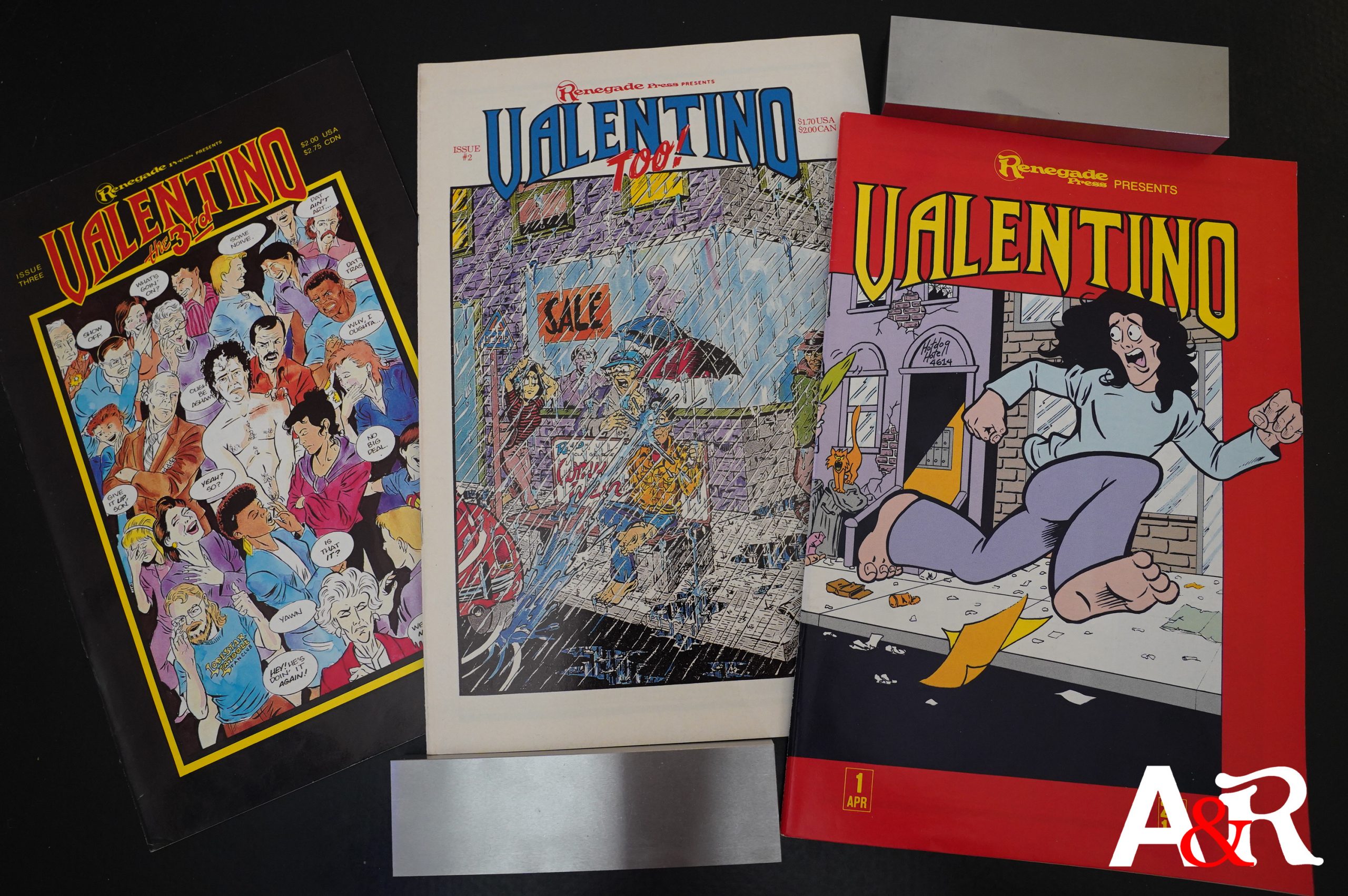 I remember this comic well from when I was a teenager. It seemed fresh and new and original: An autobio comic.

Now, this isn’t exactly the first autobio comic ever: I think people usually point to the Binky Brown thing by Justin Green, and there had then been a bunch of underground autobio comics (Aline Kominsky etc), many of which I’d read at the time — and, of course, American Splendor. But this seemed like a different approach: More lighthearted and more… well… mainstream?

It’s also the first Renegade #1 to be published, I think. 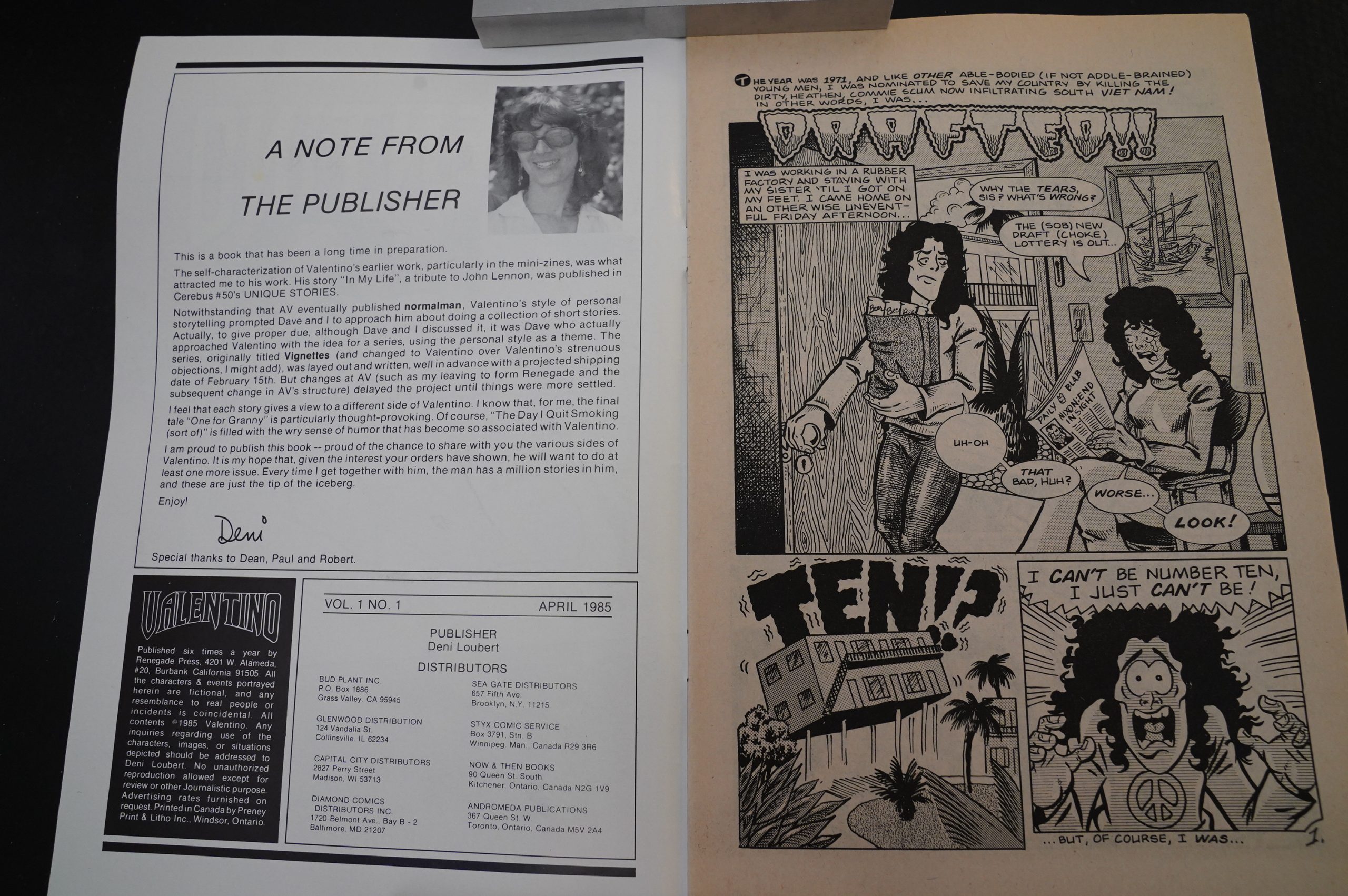 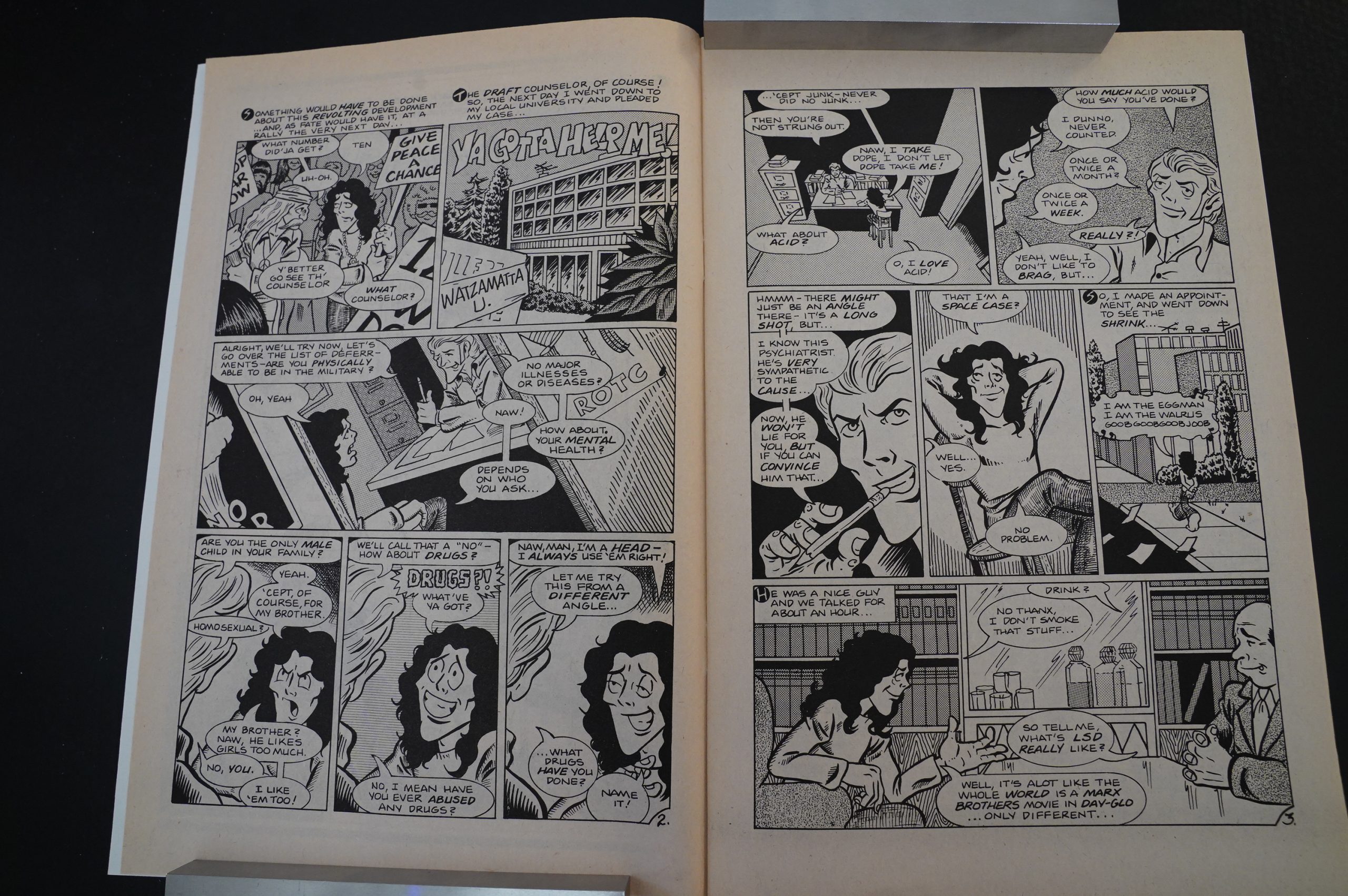 It’s a story about how Valentino dodged the draft by getting a friendly doctor to certify that he’s an acid basket case. It’s fun! 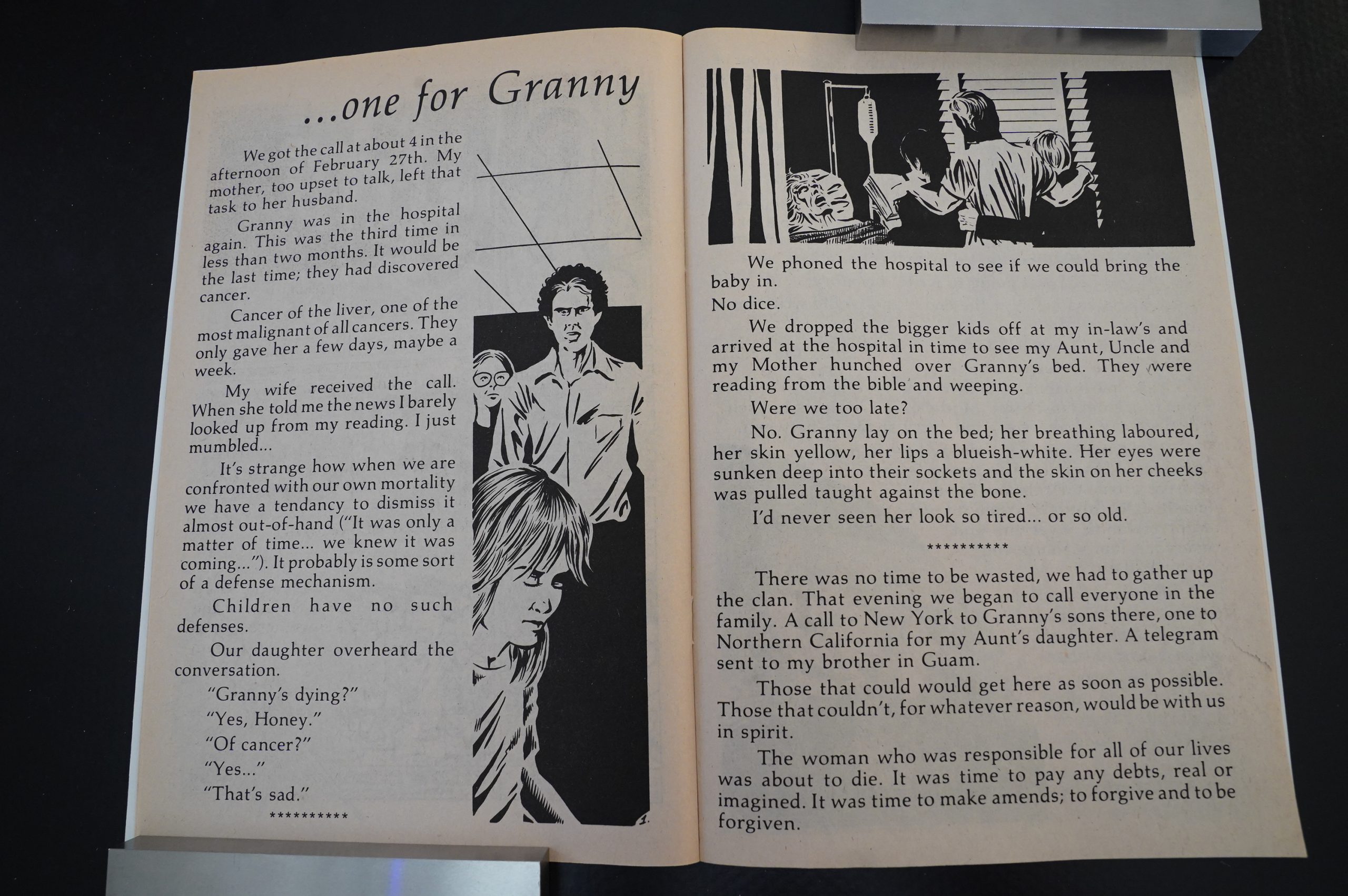 But the longest piece in the first issue (almost half the page count) is this illustrated text thing about his grandmother dying, which… isn’t? 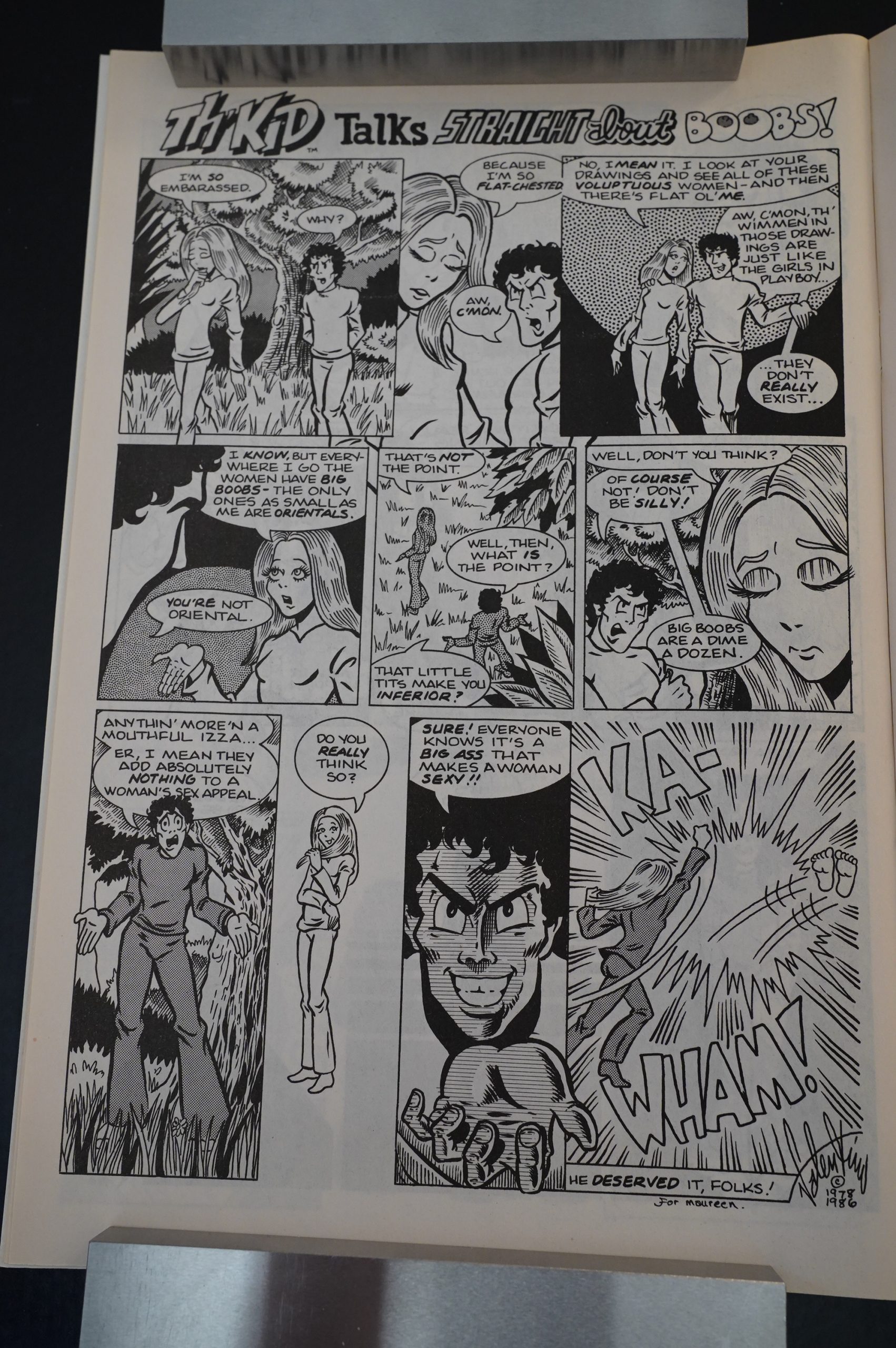 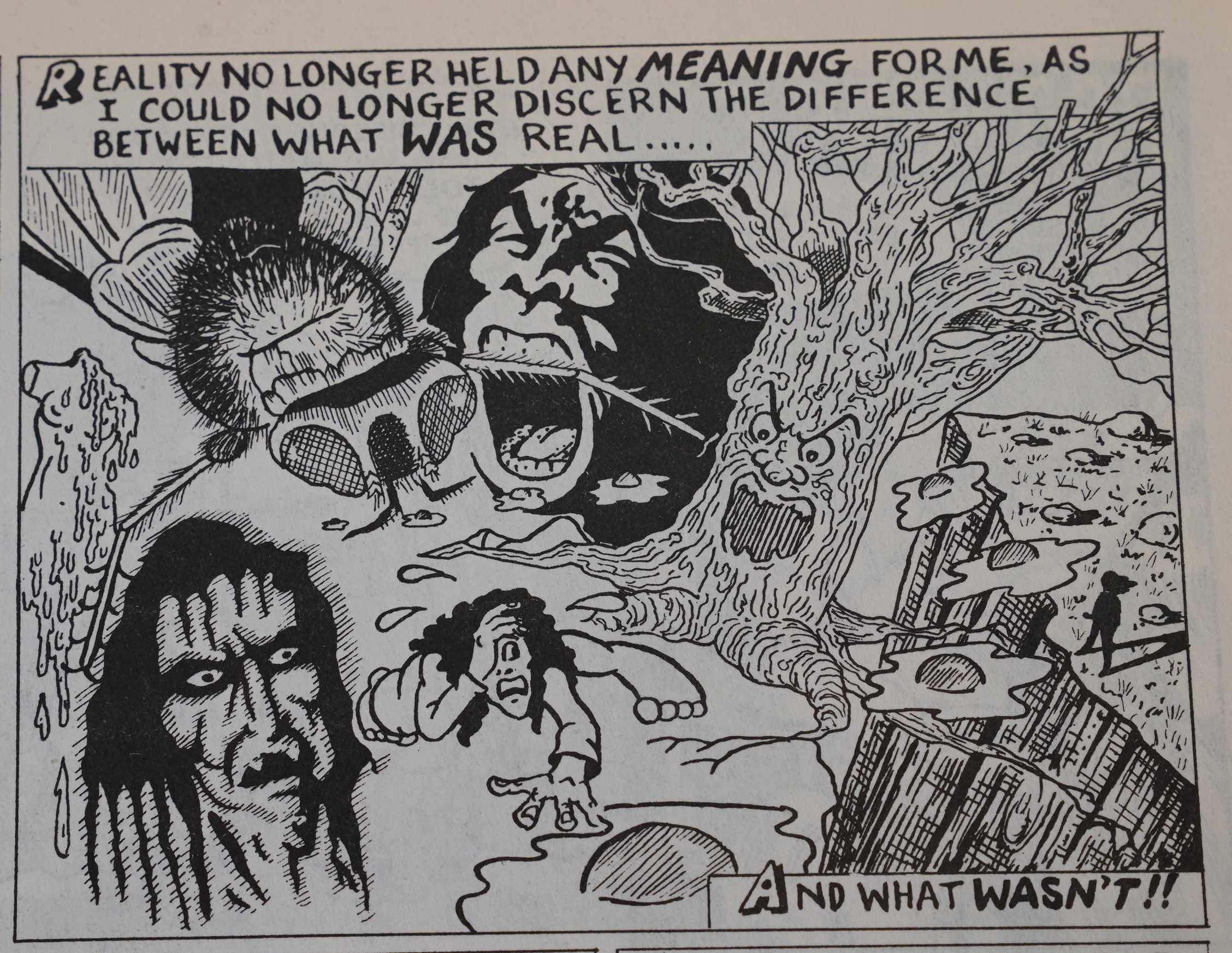 … and an unfortunate experience with belladonna, which left him hallucinating for two months. Perhaps that kindly doctor wasn’t all wrong! 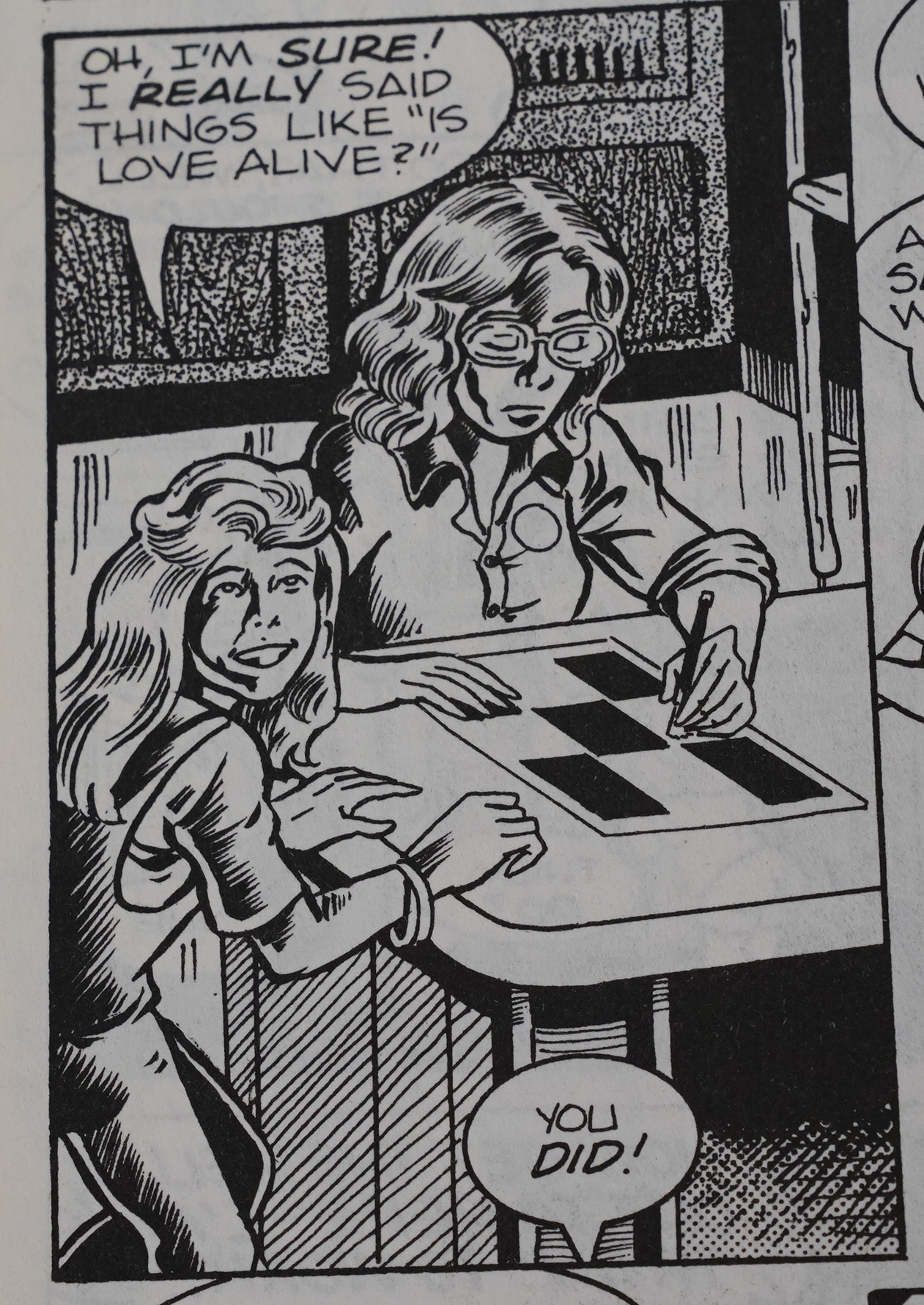 It’s fun watching Valentino experiment with a number of rendering styles. The main problem, though, is that his characters are pretty stiff and awkward, so it looks a bit odd when you try to render them more moodily… 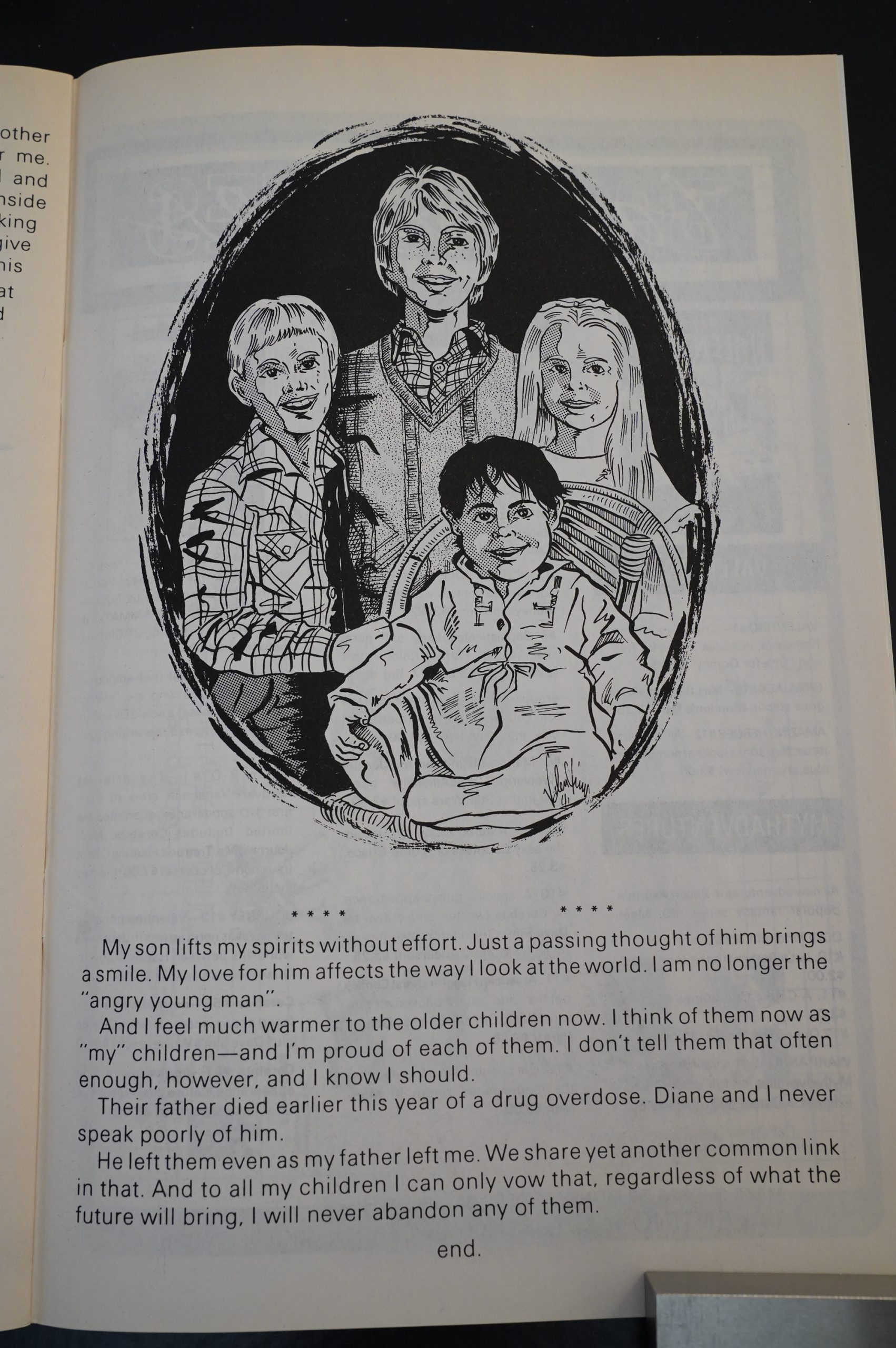 Fortunately the third and final issue is all comics. Valentino has deep insight into how his own mind works. 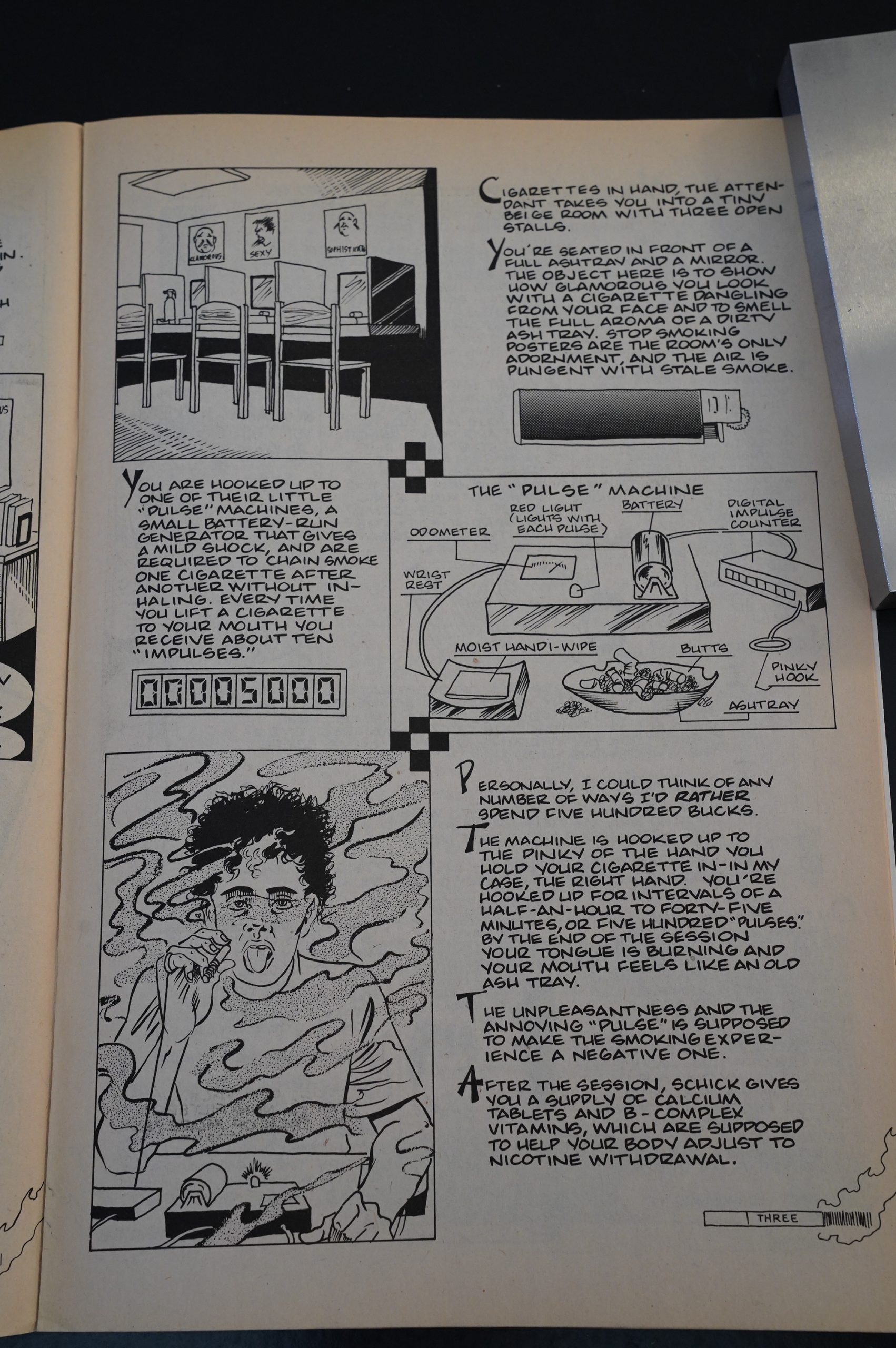 The longest piece in this issue is about trying to quit smoking, and the funniest bit there is this … thing he went to. He paid $500 to sit in a room, getting shocks while smoking several packs of brands of cigarettes he doesn’t like. 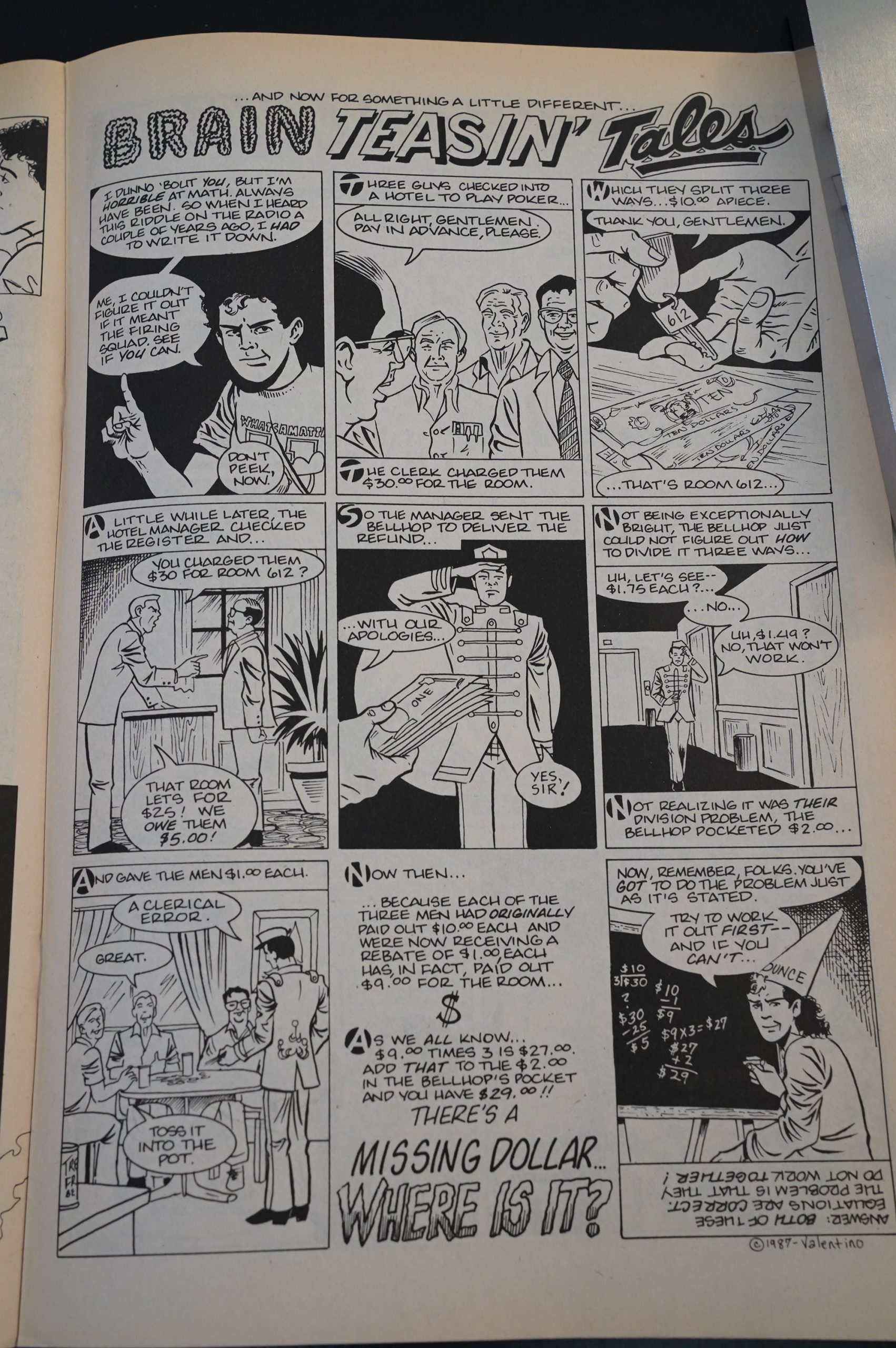 Oooh! I remember that riddle from my childhood! I’ll save you the bother of holding your laptop upside down: 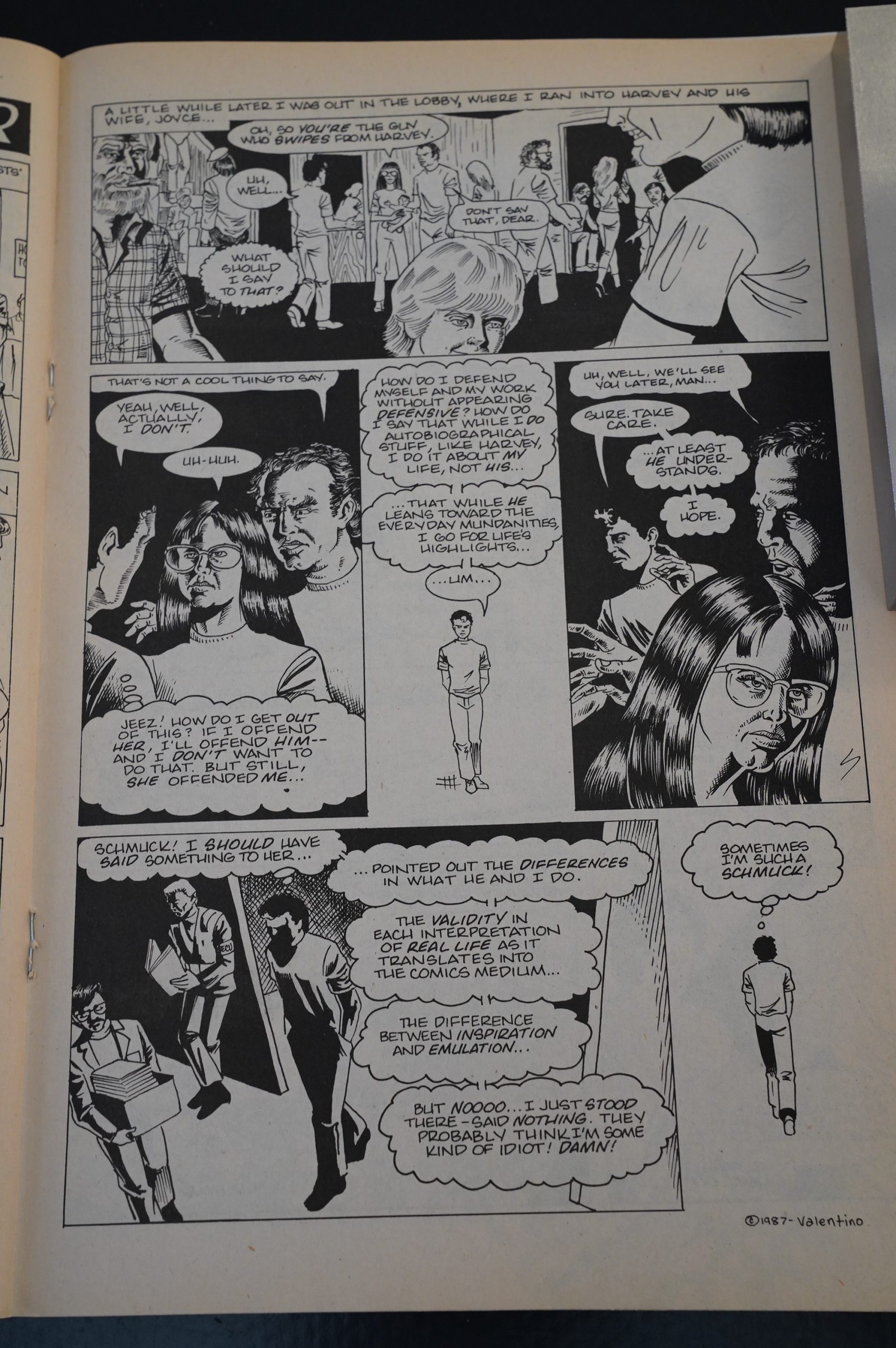 Valentino started drawing super-hero comics a bit after this? I’ve always boggled at that, but perhaps panels like this shows that he’s on his way.

Anyway, these three issues are quite entertaining.

In conclusion, Valentino reiterated the
book’s lighter perspective than the two
preceding ones„ but for those who likes
it, he p’romises to “get heavy again next
issue” (#4), which, for future reference,
will be called “Drawn and Quartered”
and as it looks now will be one continu-
ous story throughout.

I think some (or most?) of these stories were reprinted in a book called Vignettes in the 90s (and that’s the title Valentino wanted to use for this series). He’s done a handful of autobio comics after this… I remember reading A Touch of Silver in the late 90s? Don’t remember anything about it, though.

JIM VALENTINO
Valentino
Before the superheroes Shadowhawk and Guardians ofrhe
Galary and after the superhero parody normalman, came
Valentino’ s autob i ographical series for
Renegade Press.
These three issues are de-
pressing when the reader pauses to
consider the diversity of storytelling
techniques and moods in these stories
— which have by now been aban•
doned for How 10 Draw Comics the
Marvel Way. Of interest to American Splendor readers.
“The Day I Met Harvey pekar” is a tlwughtful piece; it can
be found in Valentino the 3rdJP