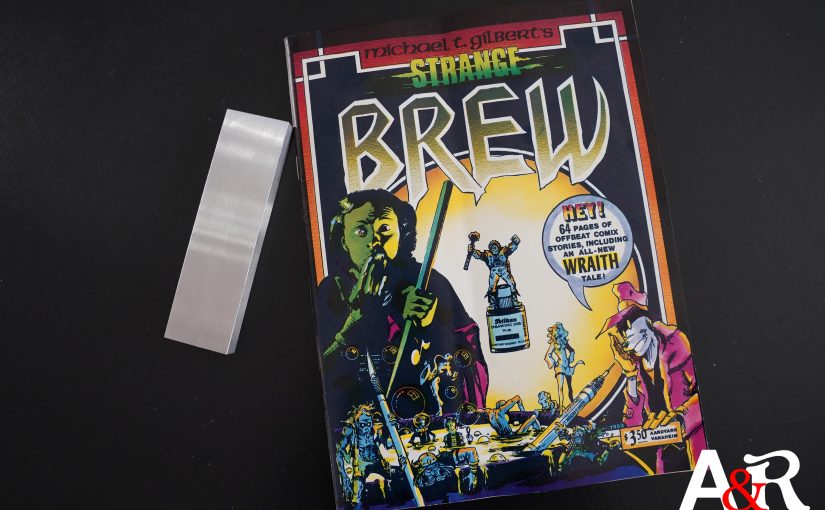 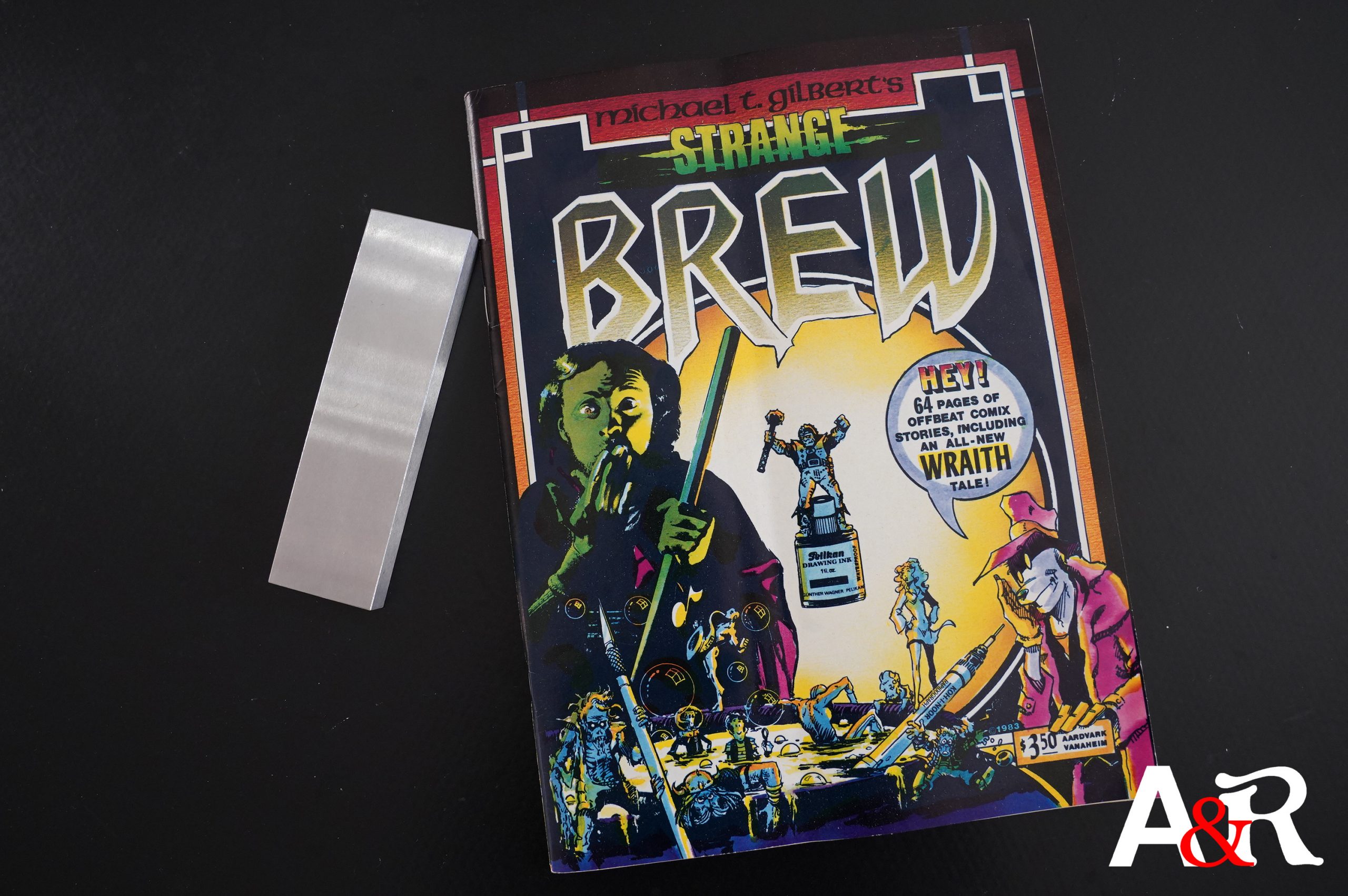 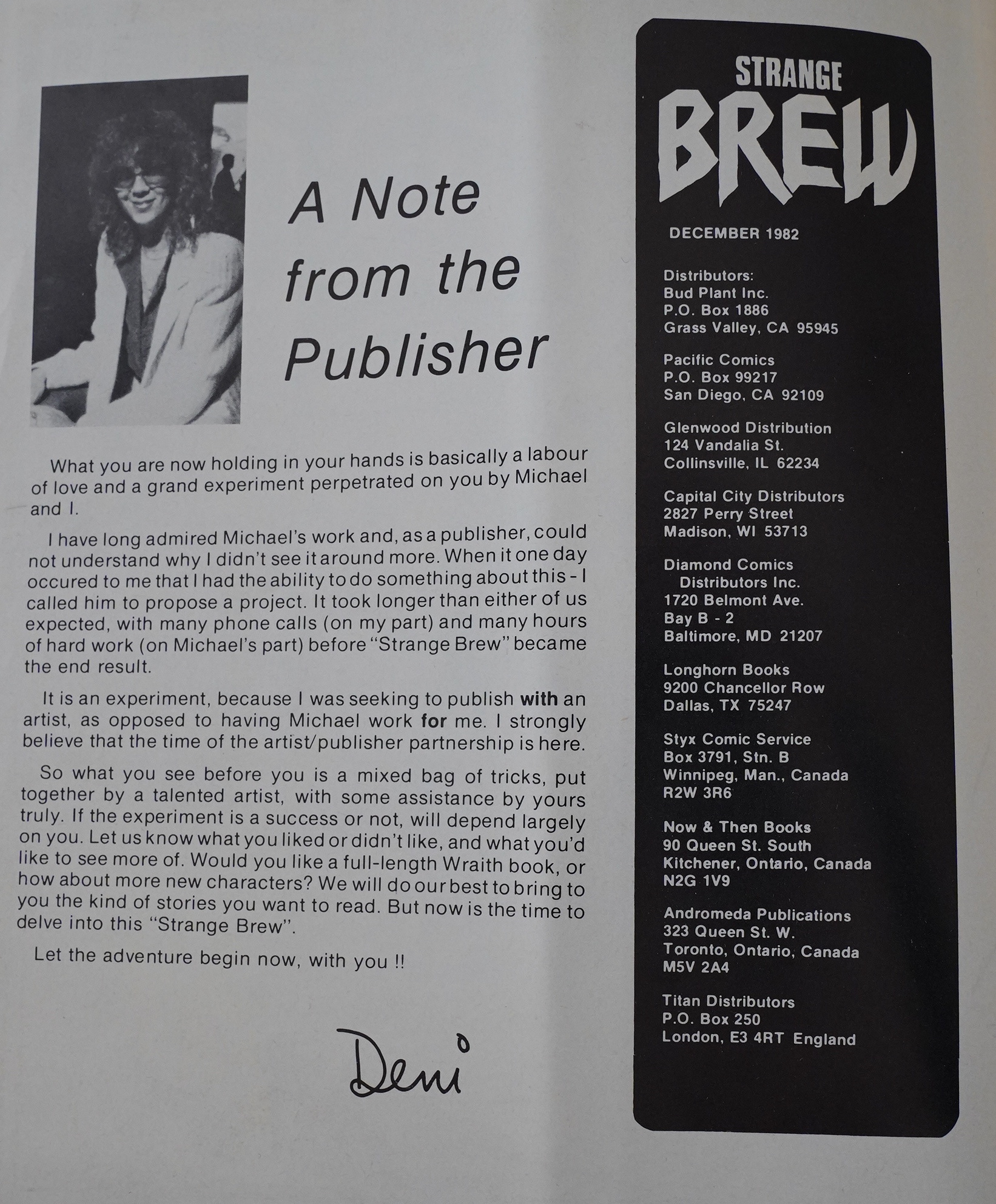 This is the first non-Dave Sim comic Aardvark-Vanaheim has published, and it’s in a somewhat strange format: It’s the same height as Cerebus, but a couple of centimetres wider — so the form factor is more like a magazine, but smaller. It’s the only thing Aardvark-Vanaheim would publish in this format. 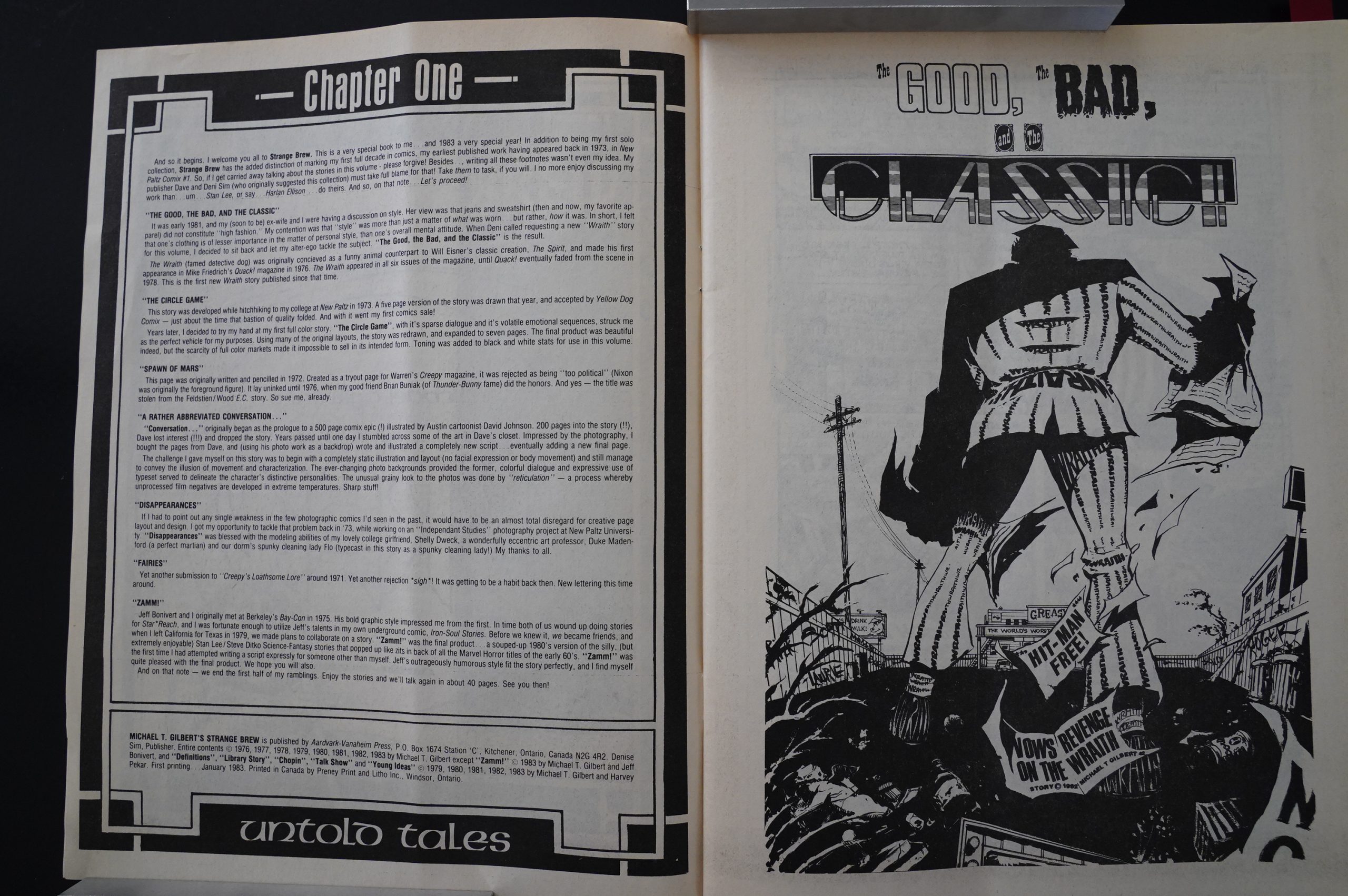 And it’s in two sections: The first (and longest) section is pieces that haven’t been published before (i.e., mostly things that other editors had rejected in the 70s), and one new piece: 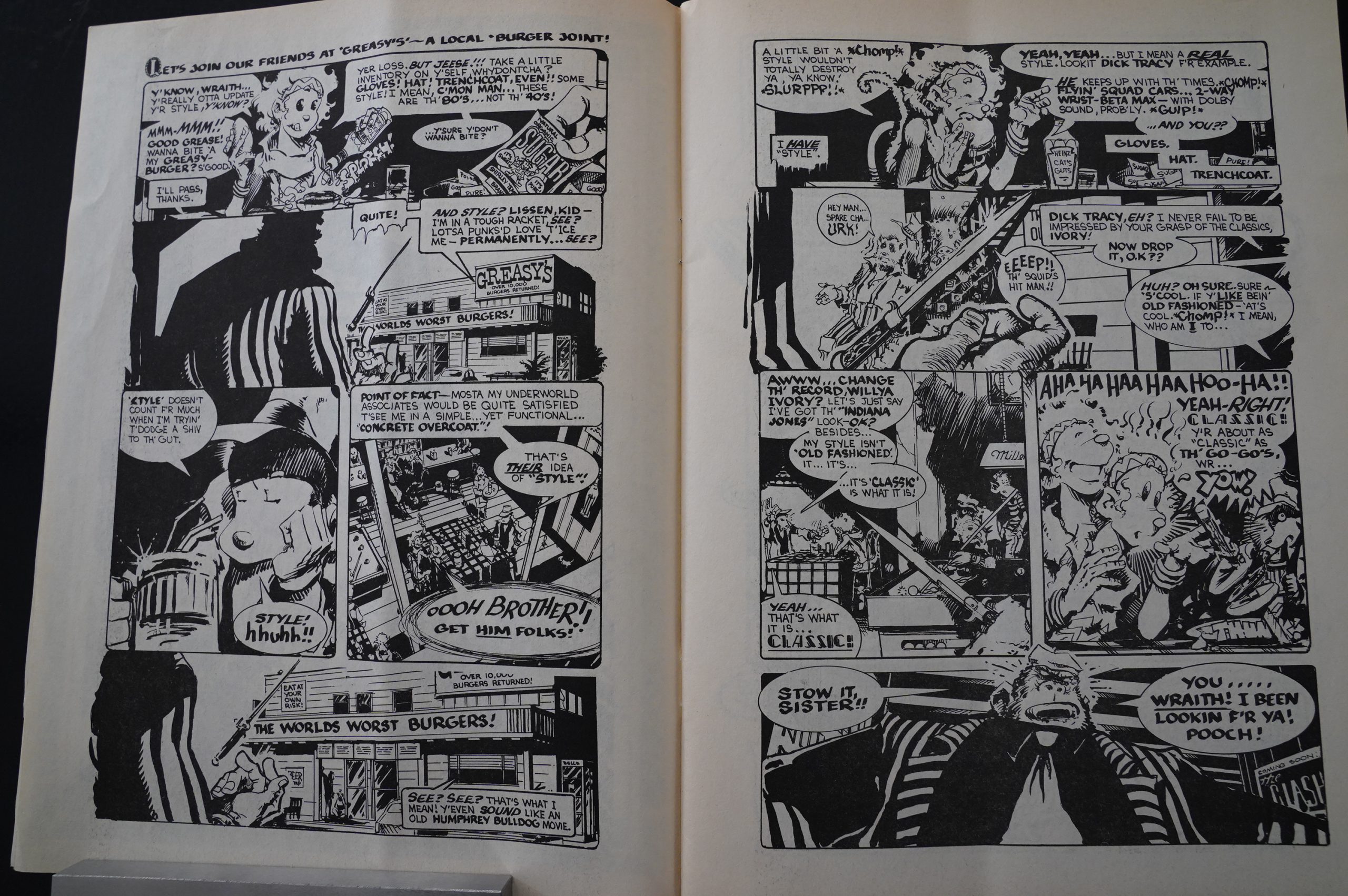 A new Wraith story. The Wraith was Gilbert’s most famous character (basically a riff on The Spirit), and was serialised in Quack! (the Star*Reach sibling publication). (Mr. Monster is perhaps more well-known today.) 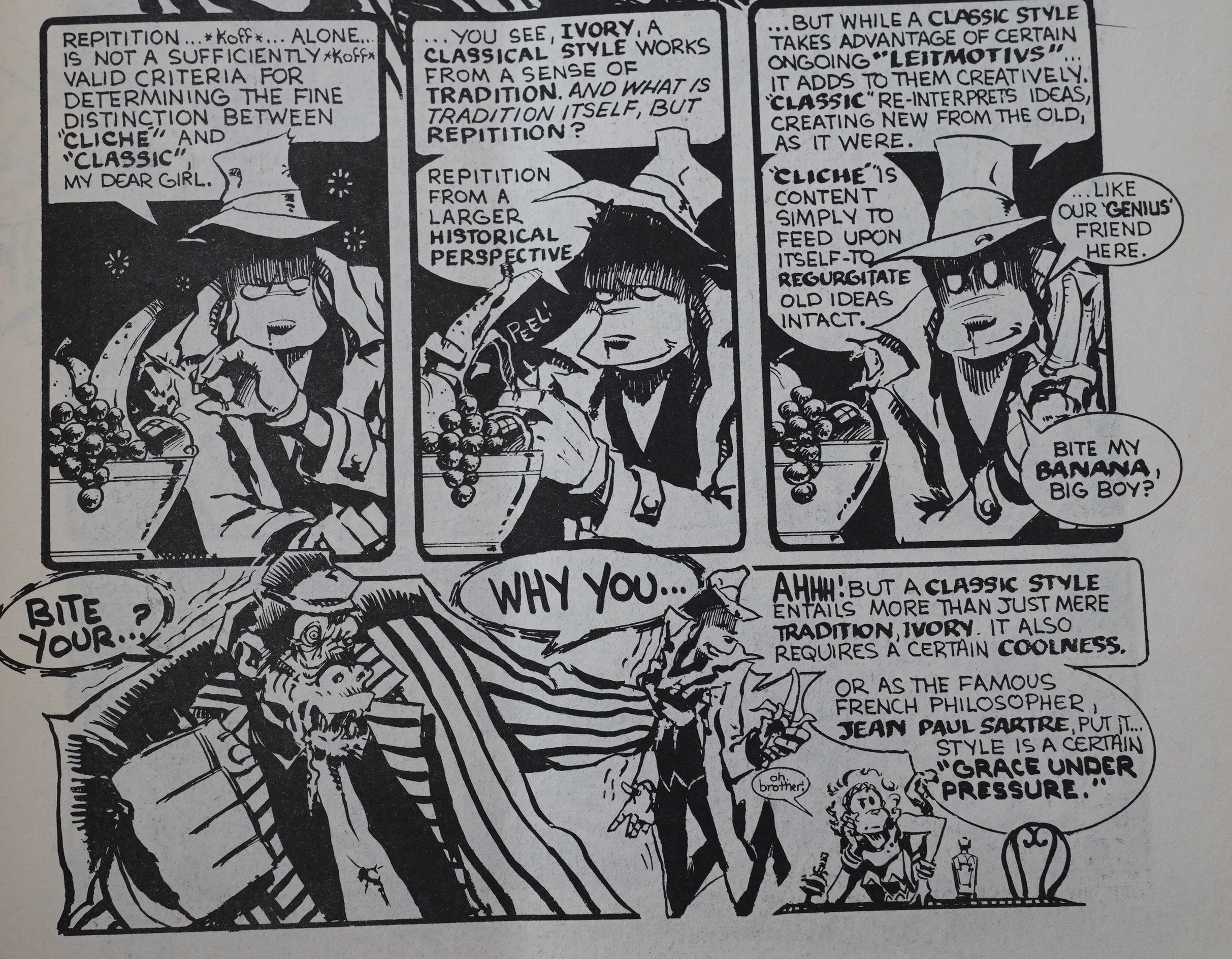 It’s a very Gilbert story. I love his linework and character designs, but he has a tendency to pile everything on so hard that it makes actually reading the stories kinda a chore? But, I mean, it’s witty…

Gilbert has one mode when being funny: Pile on the crazy. If you’re in the mood for that sort of thing, Gilbert is your go-to guy. 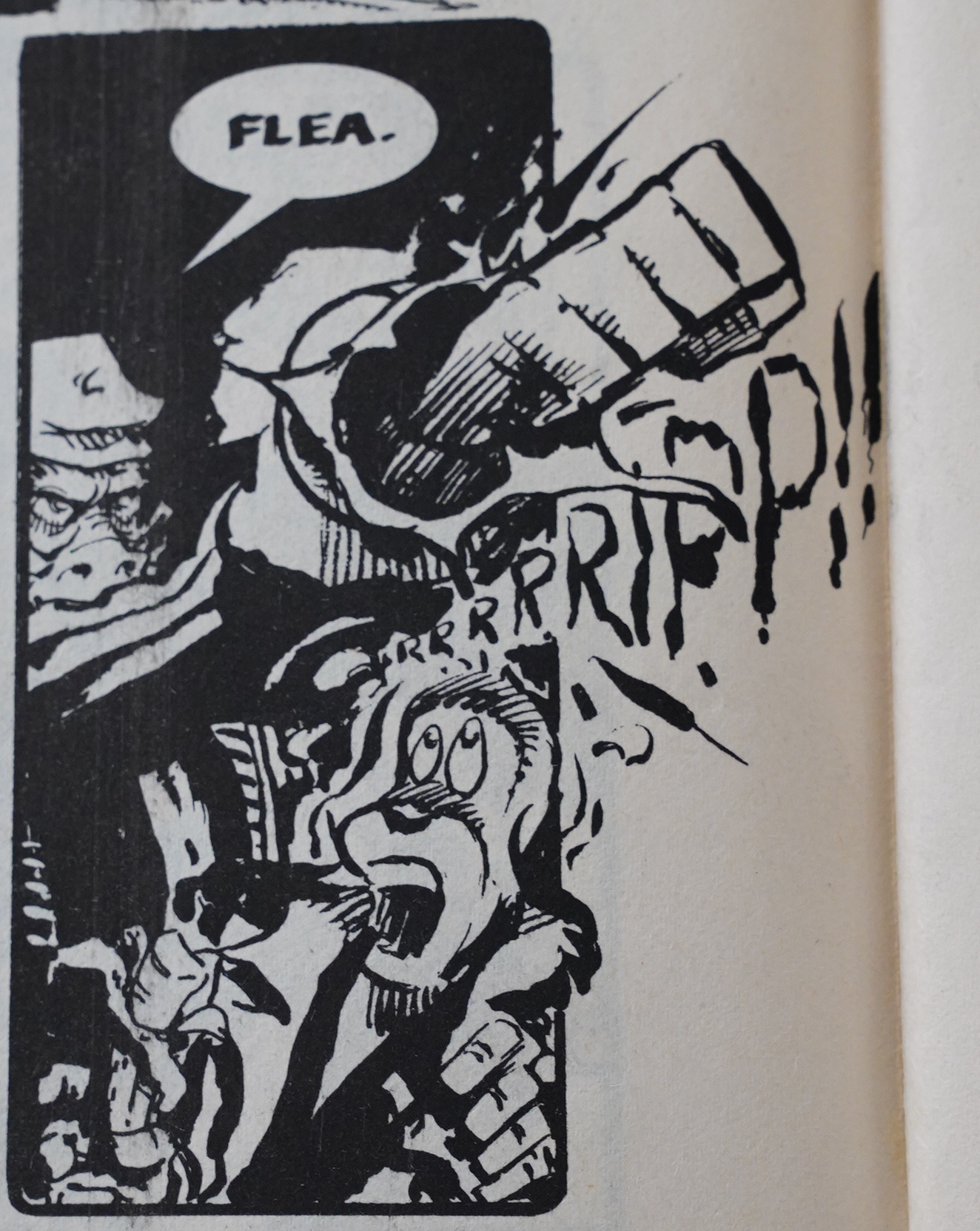 There’s so much action it bursts out of the page. 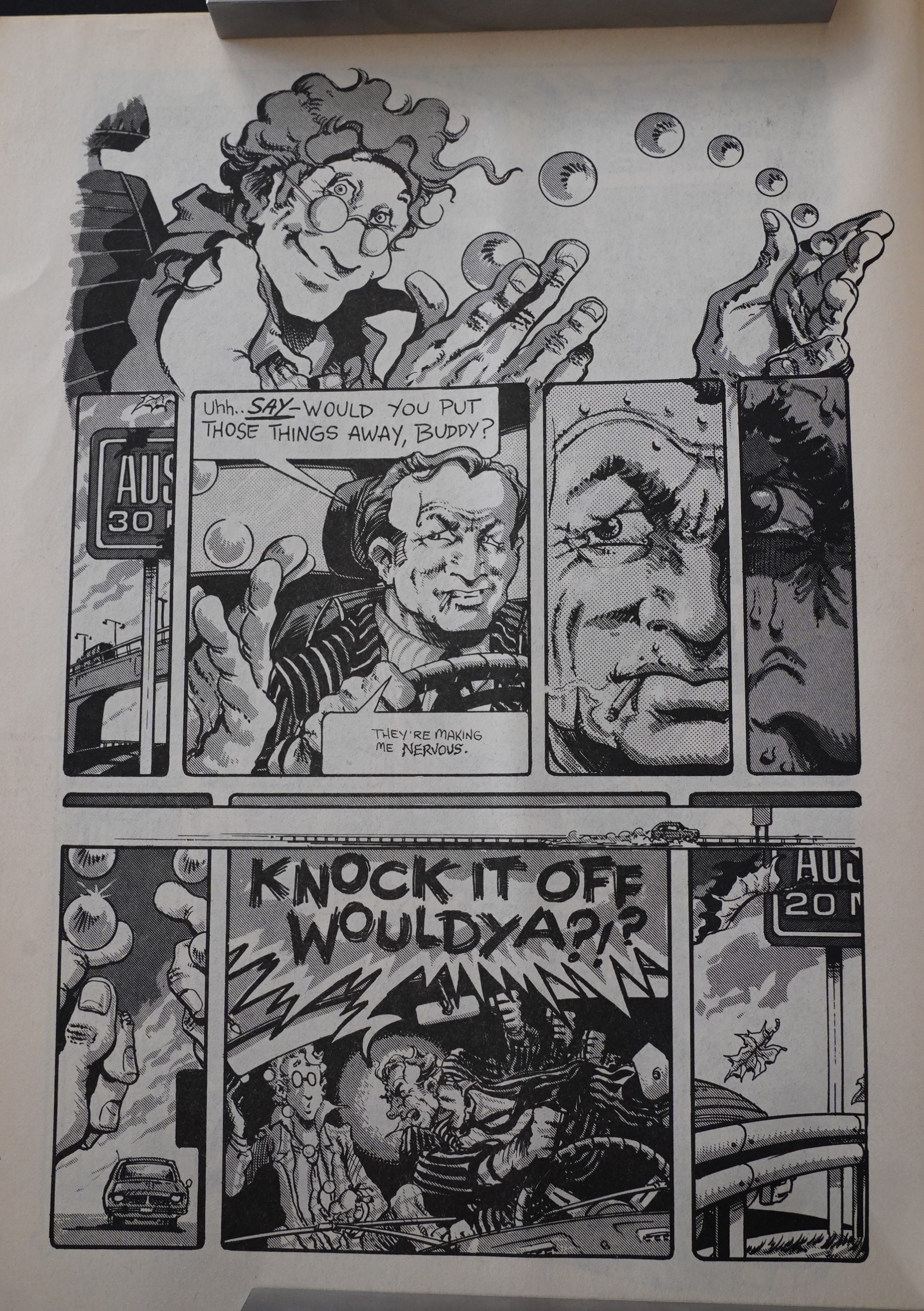 The other pieces are older, and are done in a variety of styles, but mostly feature twist endings. 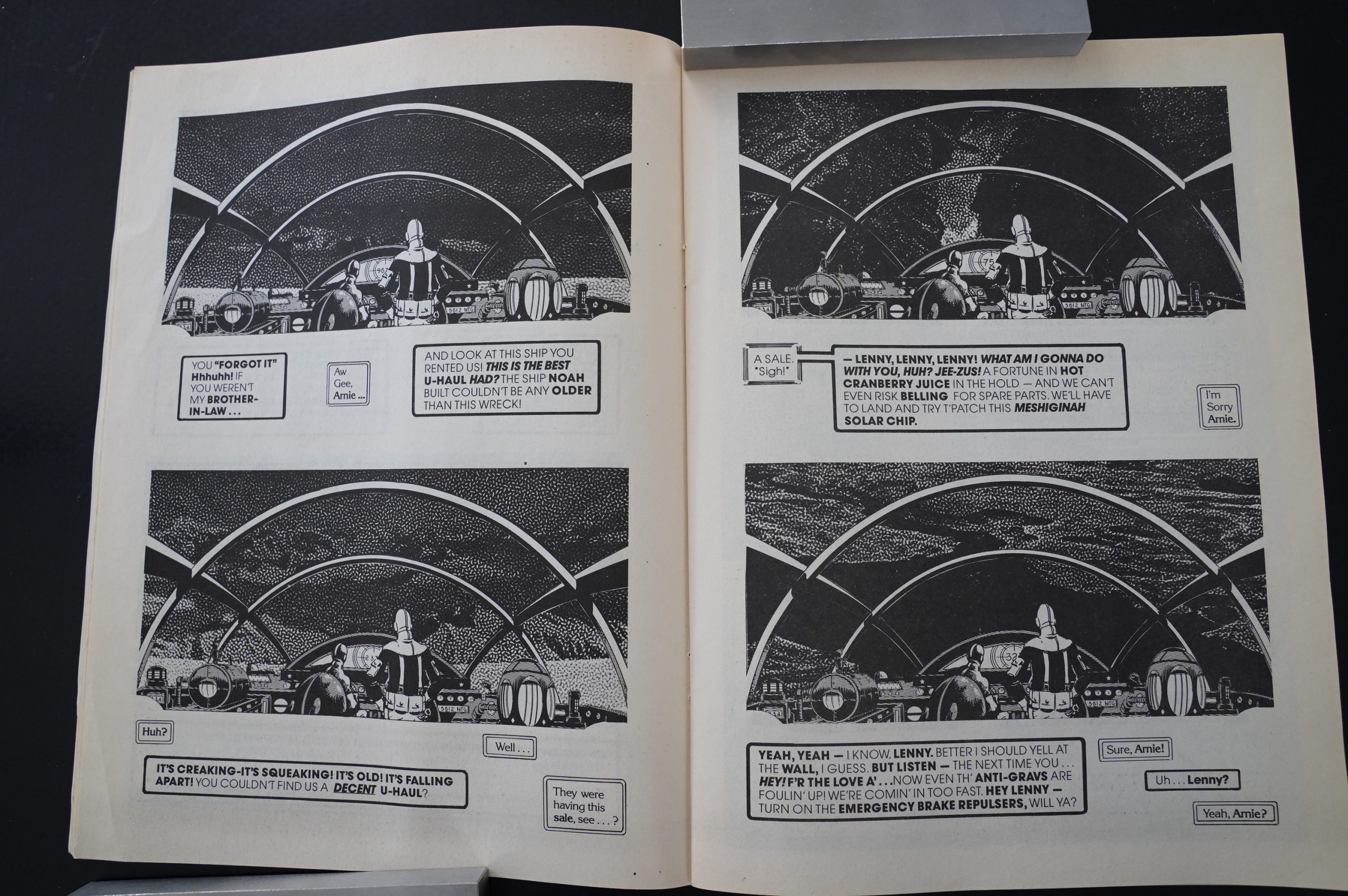 And several of them have one thing in common: Gilbert is avoiding having to actually draw anything, so here we have an experiment in repeating the same character poses over a shifting series of photos… (Which are repurposed from a 500 page graphic novel by David Johnson that Johnson abandoned after completing 200 pages.) 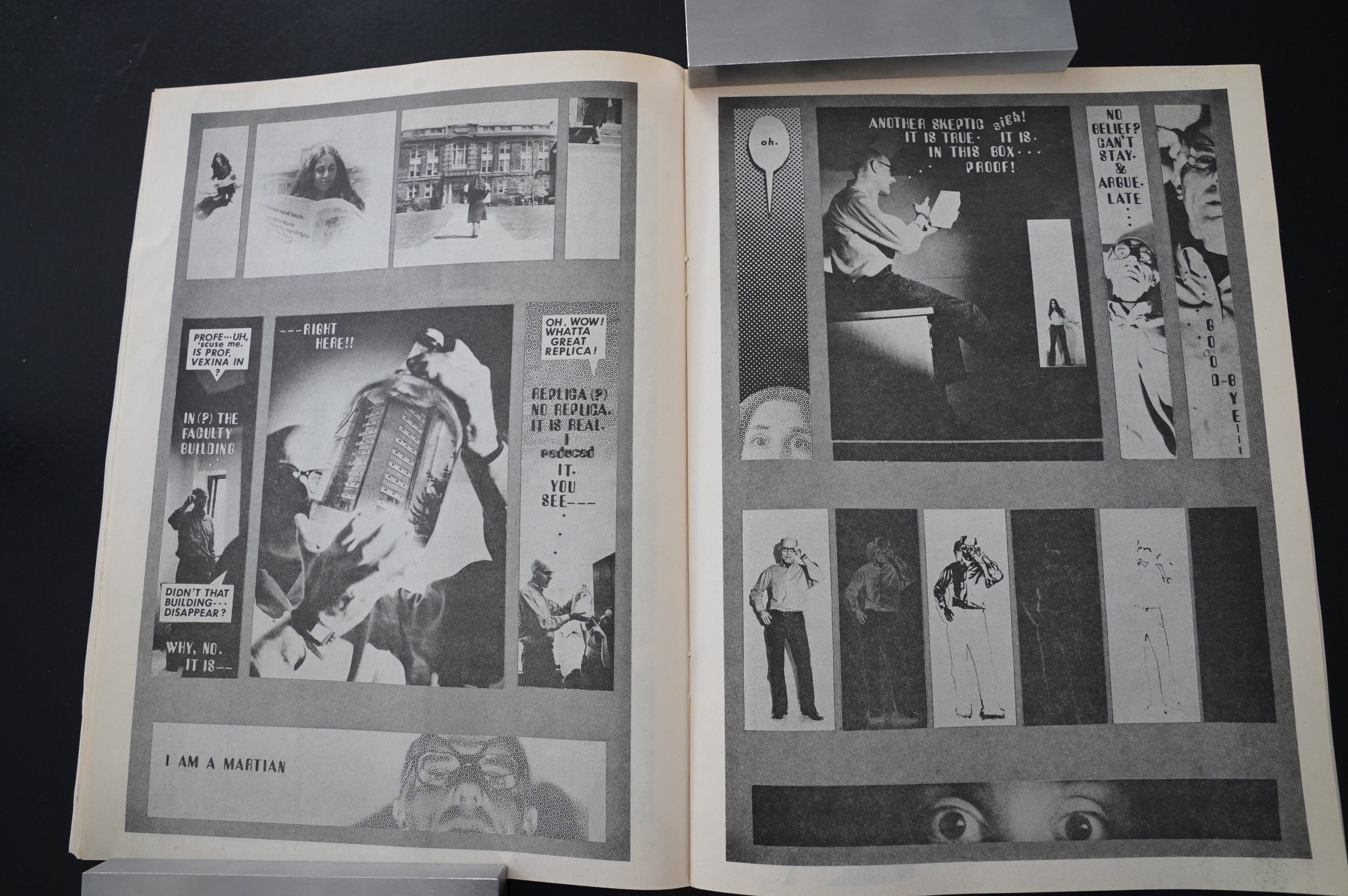 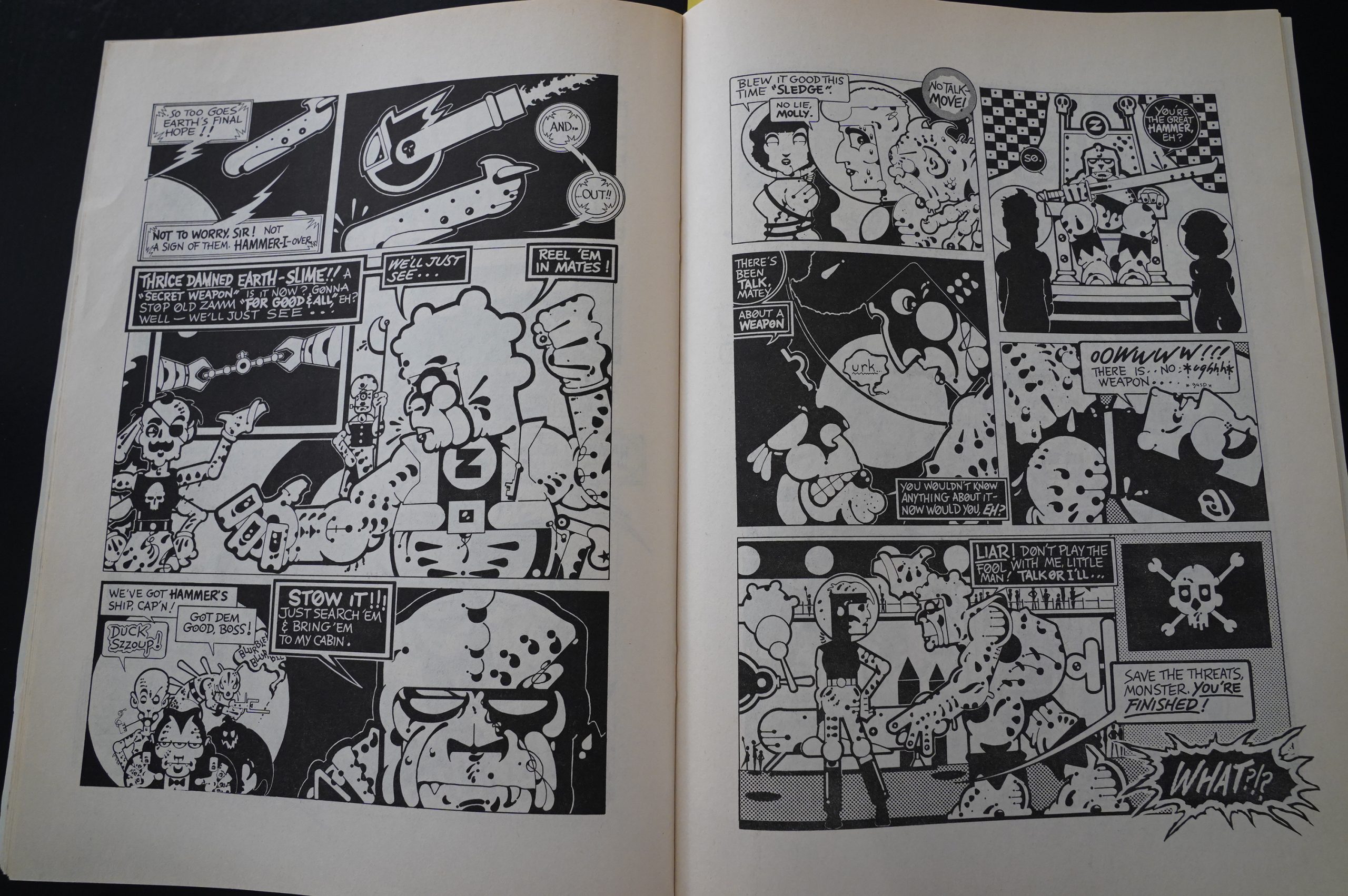 And having Jeffrey Bonivert draw it. I do love looking at Bonivert’s extremely distinctive artwork. 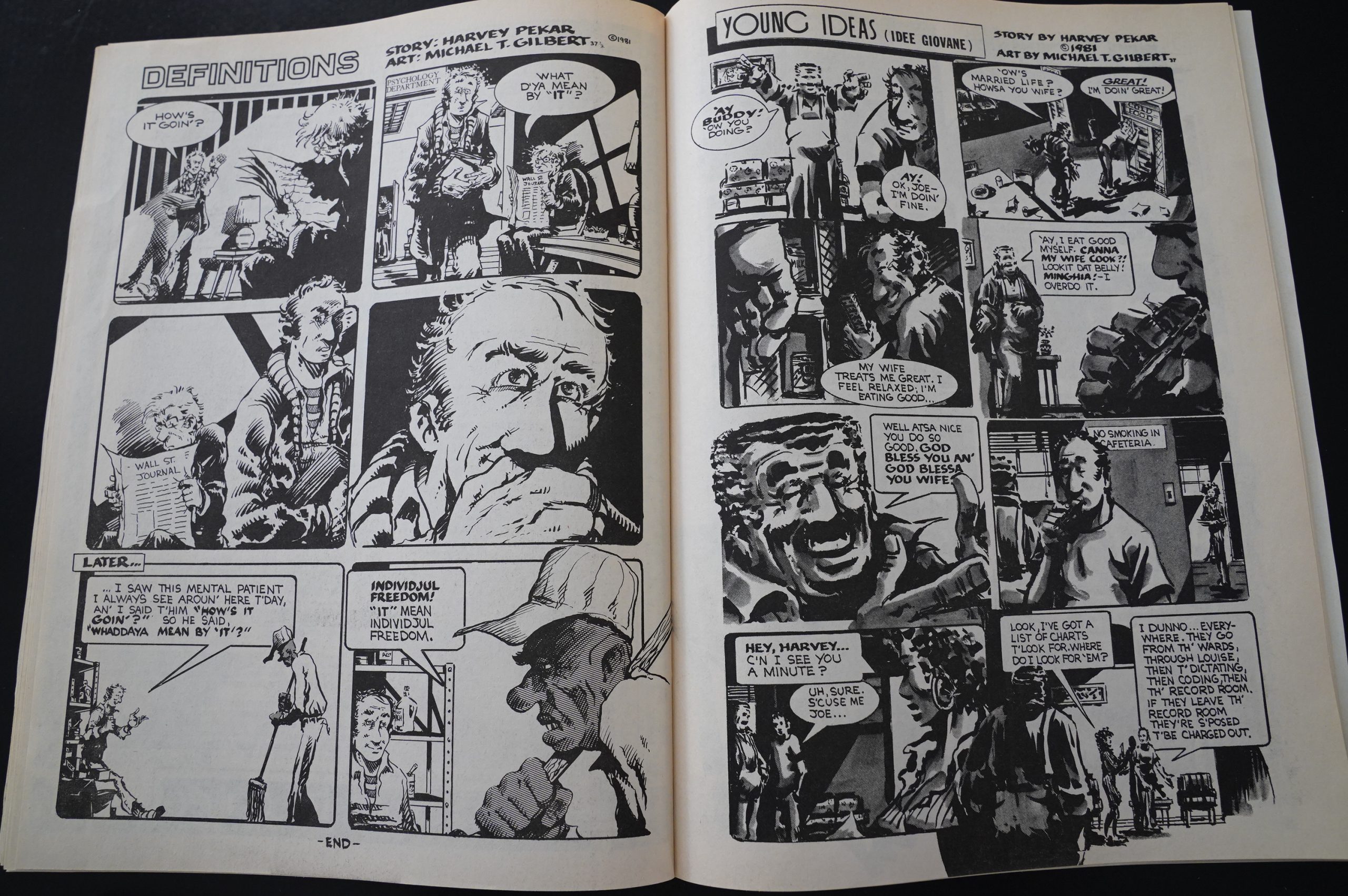 The last third of the book is reprints — several pieces from American Splendor. Which reminds me: Why has nobody ever done a comprehensive American Splendor reprint? There’s been a few “best of” compilations, but I don’t think anybody has tackled a complete one. I mean, I can understand why, because there’s some… er… less-than-professional stuff in there, but it’s a historically significant series, and the original issues are hard to find. I still haven’t read issues #1, 4 and 6… Let’s see… 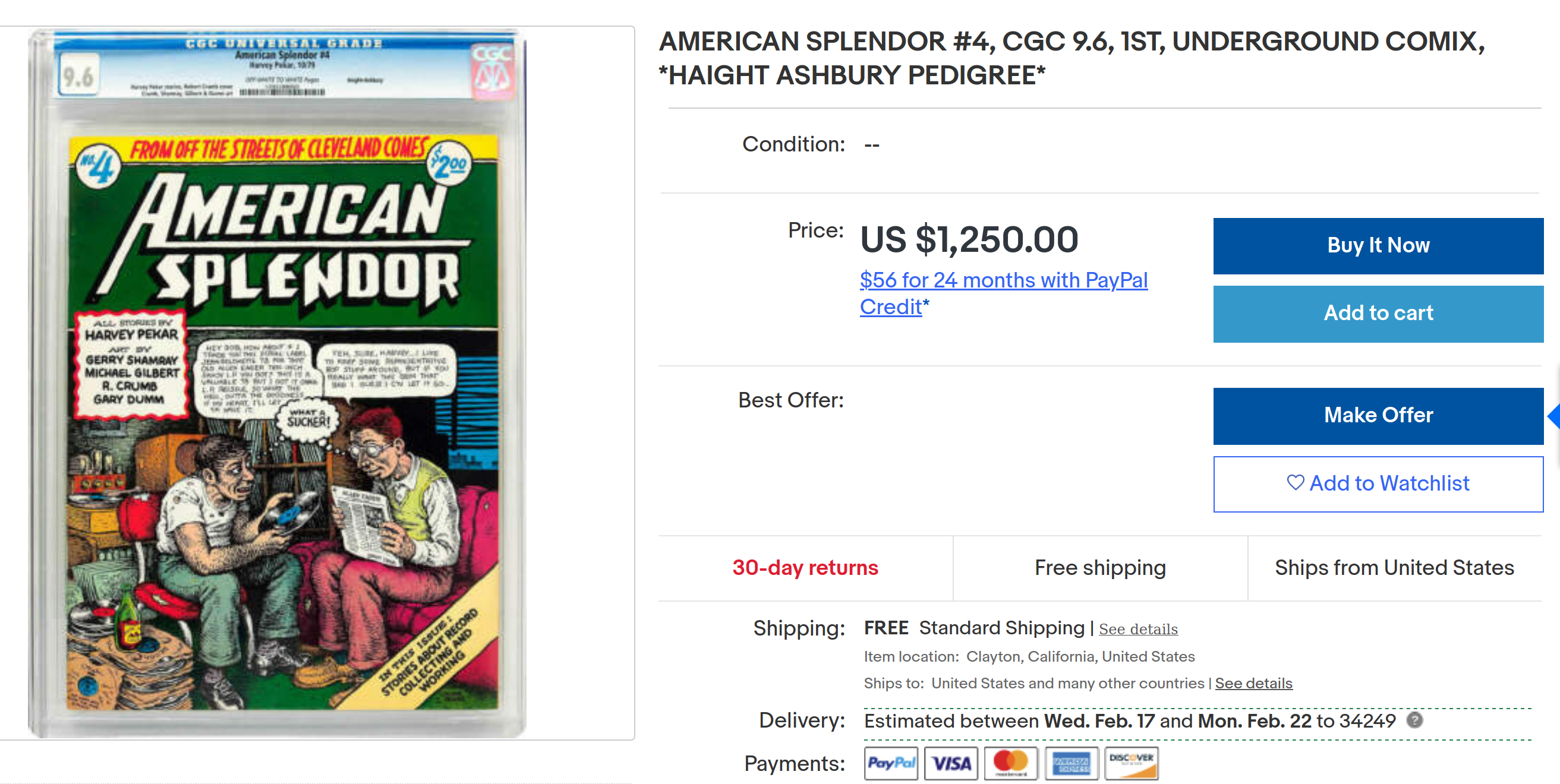 Hop to it somebody! Get the reprints rolling! 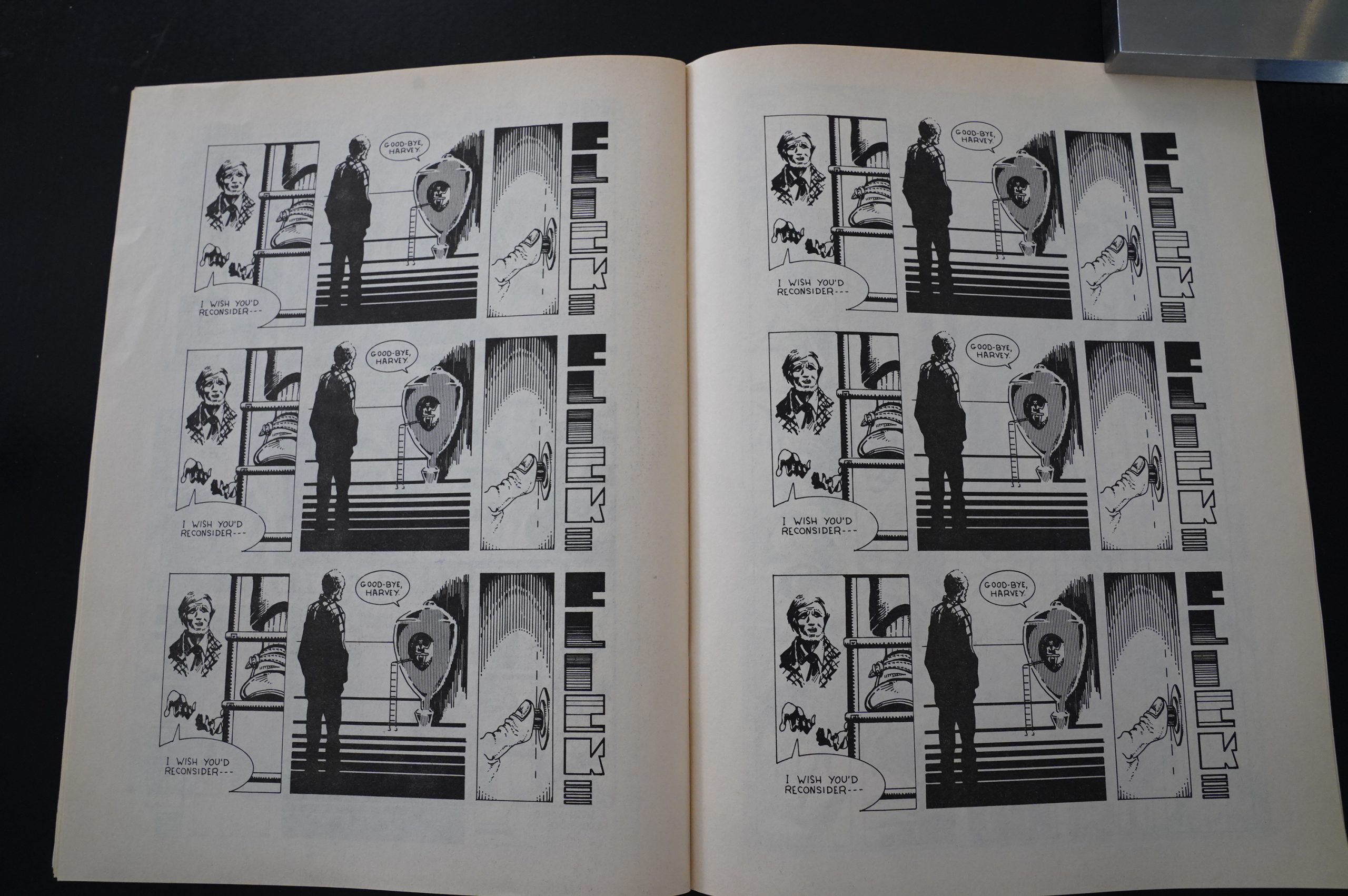 Did I mention the “avoiding actually drawing” thing?

GILBERT: I have a new eight-page Wraith story. That’s
the first time I’ve done that character in four or five years.
Deni suggested it because she thought it would help sales,
but, also, I enjoyed doing the character again after all this
time. There will also be a story called “Circle Game,”
which ‘was originally intended for color, but, due to the
limited color markets, it ended up here in black-and-
white. I also included a ten-page collaboration that I did
with Jeff Bonivert, a story called “Zamm!” done in the old
Lee/Ditko mold. Jeff was also one of the people who ap-
peared in New Pala.
I’ve just gotten back the color proofs for the cover of
Strange. Brew, and they look very nice. I’m really happy
about that. You work very hard for a very long
time—especially on a project like this, where there are so
many component parts, and you just see bits and pieces all
through a period of months—and it’s a very satisfying feel-
ing to see it all finally coming together in one package.
STEW’ ART: Do you plan to continue using The Wraith from
time to time?
GILBERT: Oh, we’ll be seeing The Wraith again! I ac-
tually have done some work on a full-length Wraith story.
STEW ART: Did say that Strange Brew intended to
be a springboard to being able to uork on that full-length
Wraith Story?
GILBERT: That was the original idea, before the Elric
Spirit #30.
GILBERT: Well, it turns out that the Sims are big Wraith fans—
The Wraith is a character I created early on in Quack! comics—and
they wanted me to do a Wraith comic book. I had planned out a
50-page Wraith story, but it would have taken me many months to
do it. Generally, you don’t get paid until publication, and it would
have been very difficult for me to work on this for six months or so
without getting paid. As a way of getting around that problem, the
Sims suggested that I let them put out a reprint anthology of my
It’s an interesting phenomenon…fans will
not remember you unless they can
associate you with a character.
works; and that would give me some lead money to work on the
Wraith project. As it turns out, Strange Bréw is really very little
reprints and mostly material that has never been published before.
STEWART: Are the reprints primarily from the Star*Reach maga-
GILBERT: There is some stuff from Imagine. I put in all the stories I
did with Harvey Pekar. are acouple of things from the
New Comix.

Michael T. Gilbert’s
Strange Brew
(Aardvark-Vanaheim)
Better he should have called it Mixed Bag.
From the beginning Gilbert has been a
kind of standing threat, always giving the
impression that, giyen a regular forum and
time to develop, he was ready to become a
major figure. Well, here it is ten years, and
one has to start wondering whether the
threat is just a tease. Not that Strange Brew
is necessarily the work of a talent dying on
the vine; the flashes of brilliance are as
present in the late material as the early, but
on the same token, you can read the entire
ten-year retrospective and still not have
any idea of what Gilbert thinks about any
given issue. The Brew is thin gruel: a couple
of clever three-page vignettes padded out
to eight and ten pages; three Harvey pe
slices of life which are, as usual, more bre
than meat; a fumetti; three atmosphere
pieces. That leaves his Eisner hommage,
the Wraith. It’s still his best work, it’s still
charming, but it’s still derivative of another
man’s work (similar criticisms have been
raised about ,Ankfray Illermay). And yet,
you can’t count him out; the talent is still
there, and he really hasn’t had the regular
forum he needs. Perhaps his involvement
with Pacific Comics and p. Craig Russell
will lead to something. Perhaps it better.
The time has long been right, and is begin-
ning to rot.

I was unable to find any reviews of this on dar intertubers.