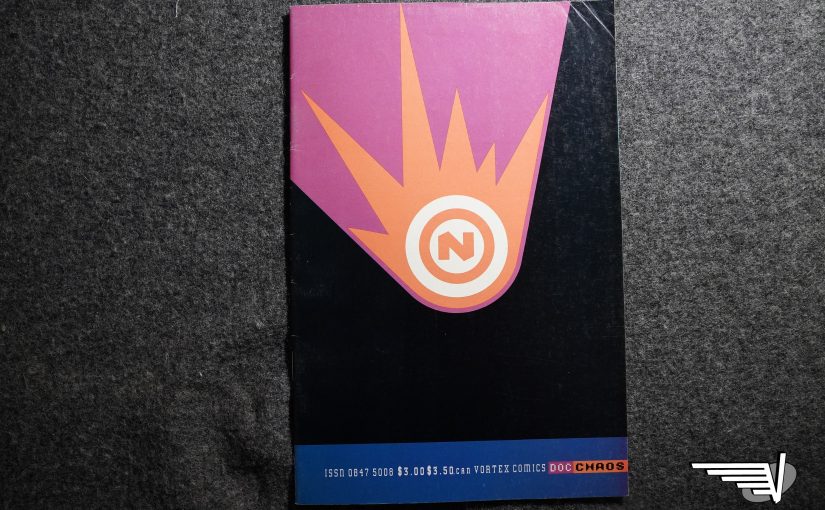 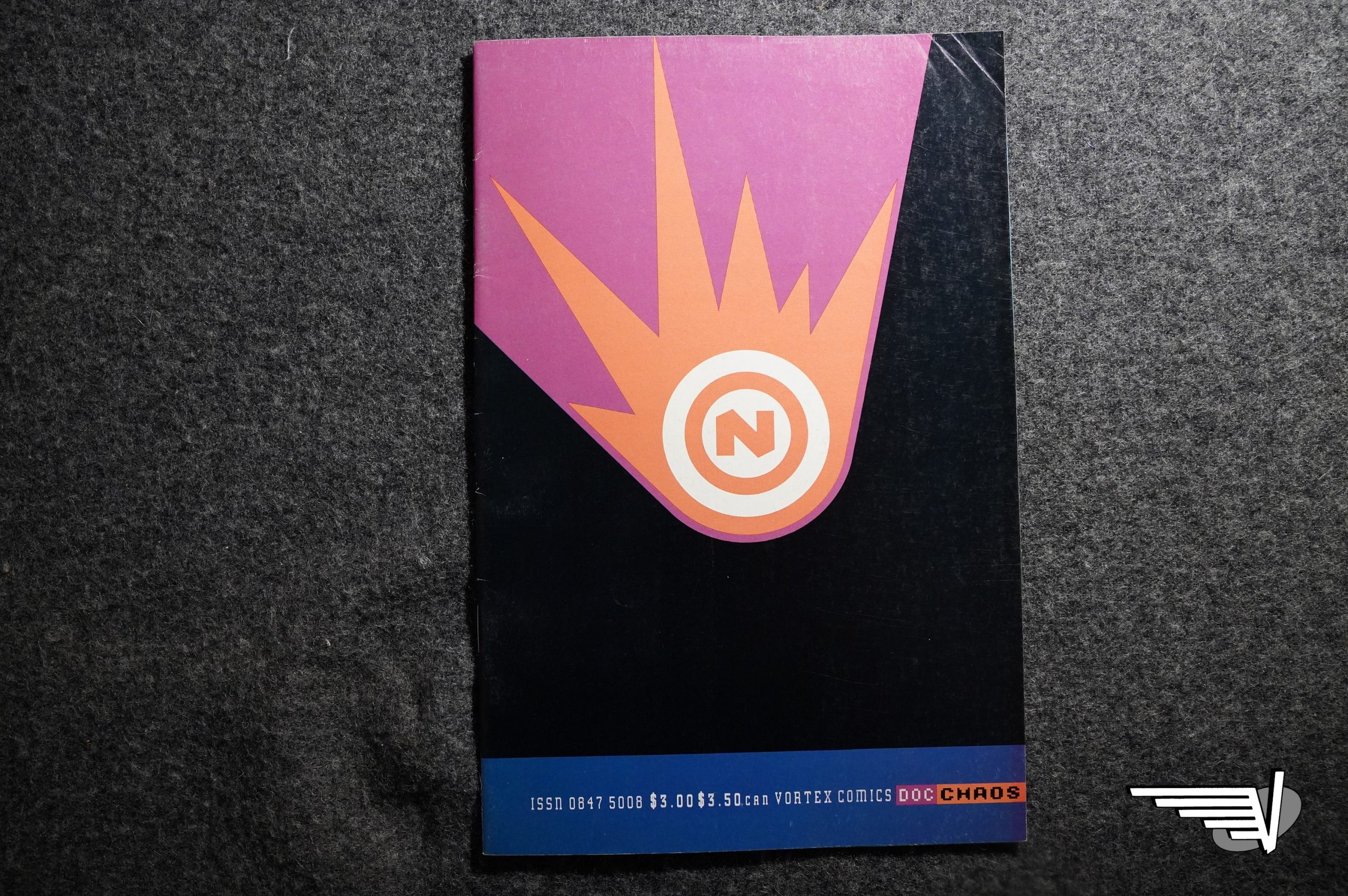 Based on the name alone (“Doc Chaos”), I assumed that might be a book by Peter Milligan or somebody like that. If there are anybody like that. I mean… Freakwave… Paradax… Doc Chaos… 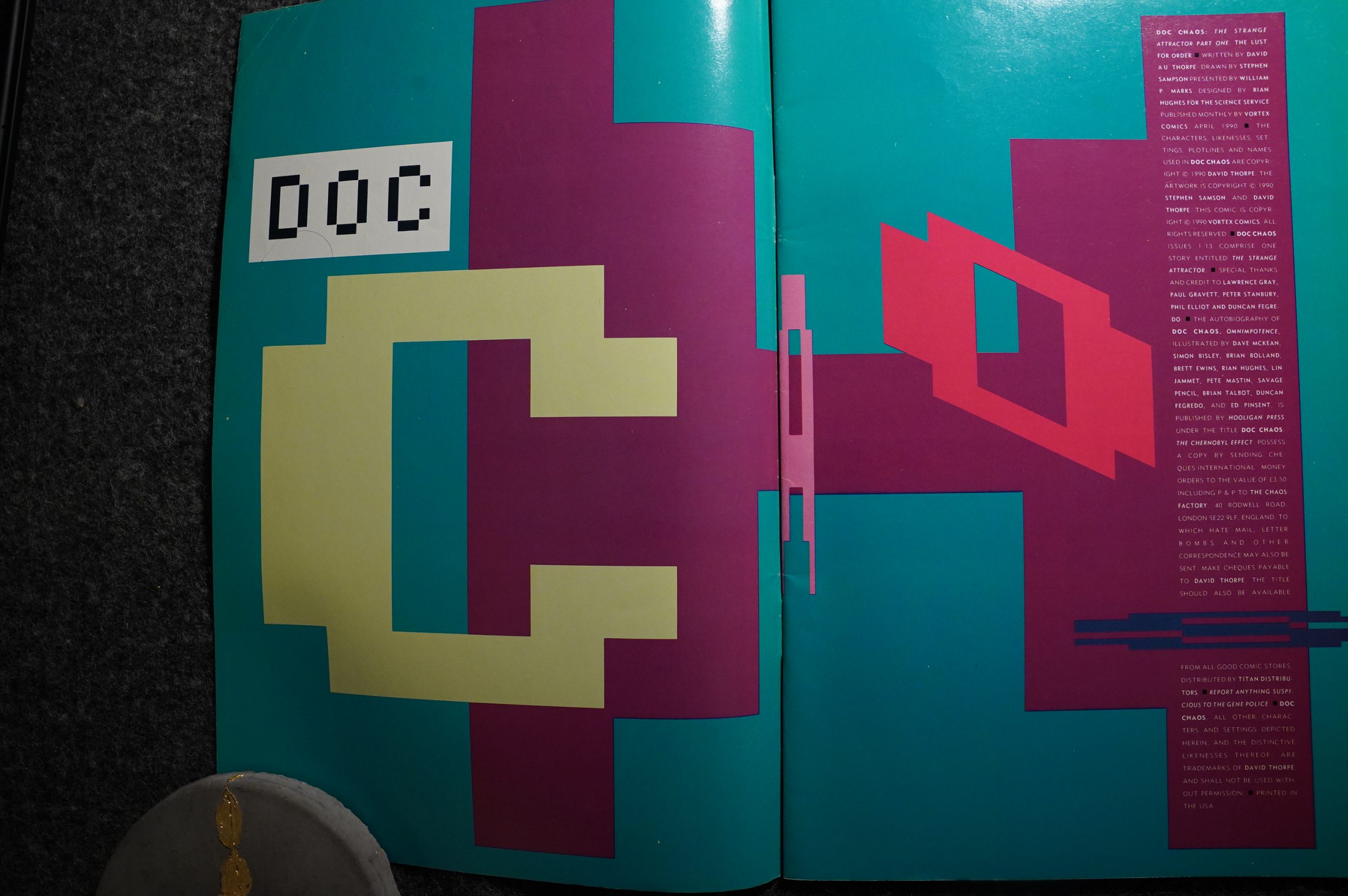 But it isn’t. It’s a bit hard to read, but this seems to be a project from David Thorpe? And there’s supposed to be thirteen issues of this series, but there’s been previous incarnations:

Thorpe’s next work of note was Doc Chaos (1985–1990). Doc Chaos was a commissioned TV series, two comics series, and a novella. Limehouse Productions commissioned scripts, which were co-written by Thorpe with Lawrence Gray. A comics version achieved a cult following. The first series was serialised by Rob Sharp’s AntiMatter Comics, then collected into books by Paul Gravett’s Escape. In North America it was published by Vortex Comics, with cover designs by Rian Hughes. The scripts were adapted into comics by artists Phil Elliott, Duncan Fegredo, and Steve Sampson.

Well, OK then! This is gonna be awesome! Let’s read the first four pages. 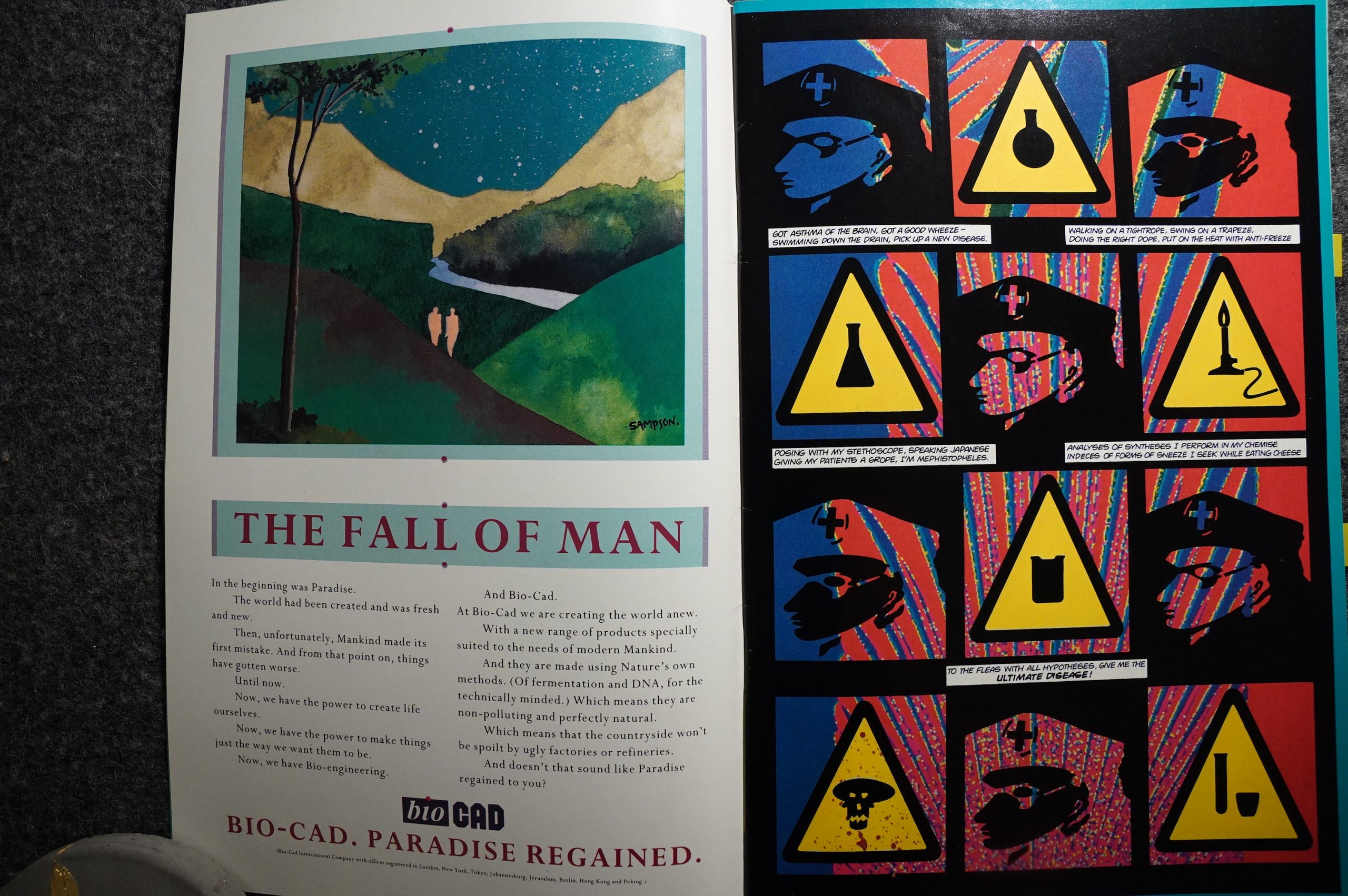 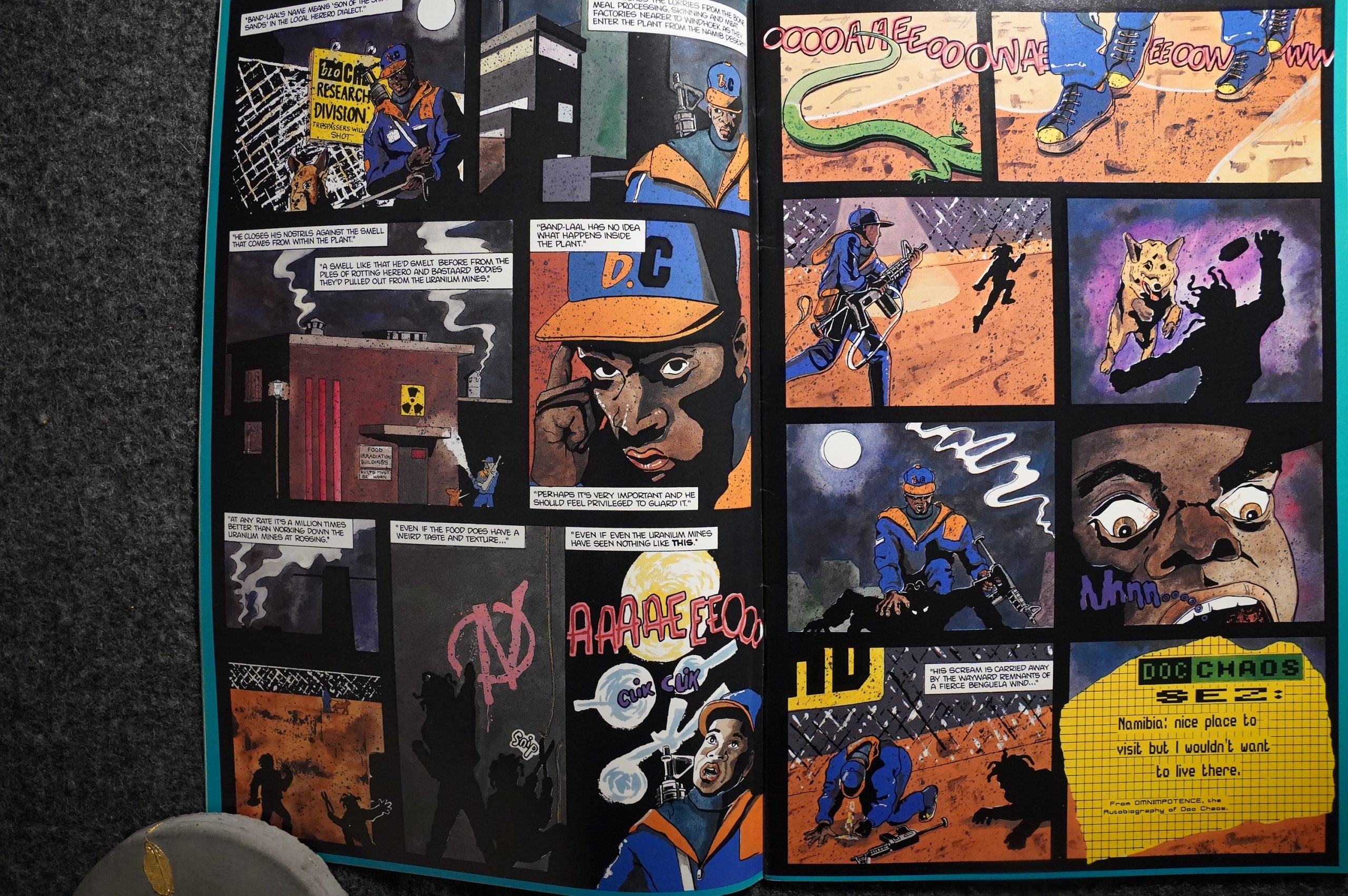 Is this super-refined, super-arty artwork (a la Pushwagner cough cough), or does Sampson just not know how to draw a human being? 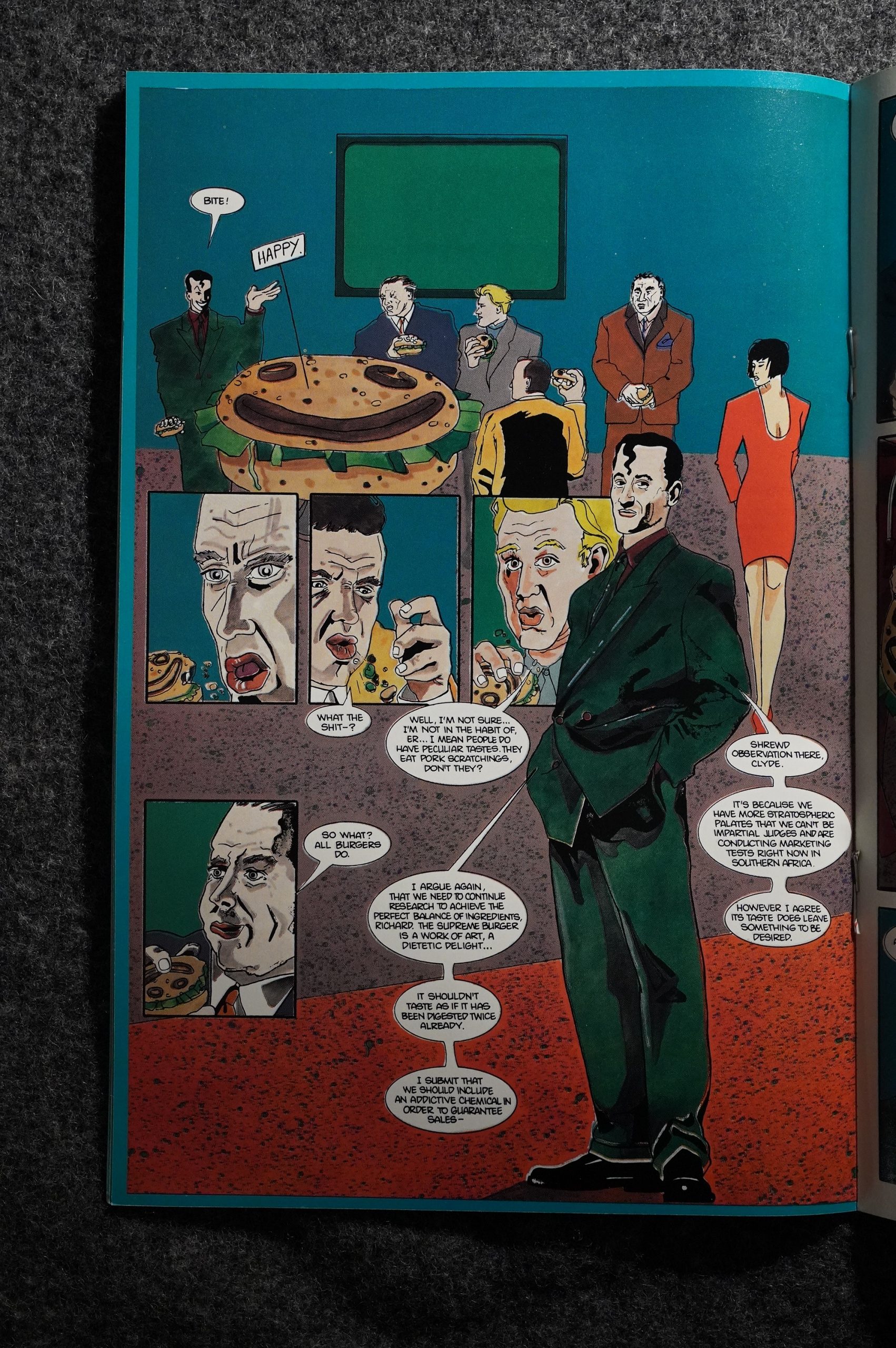 But I think pages like this kinda dispel the mystery: It’s just kinda amateurish. The storytelling is muddled and uneven. Even word balloon placement feels random.

But I do love these wild, wild colours. It shouldn’t work, and perhaps it doesn’t. but I still love it. 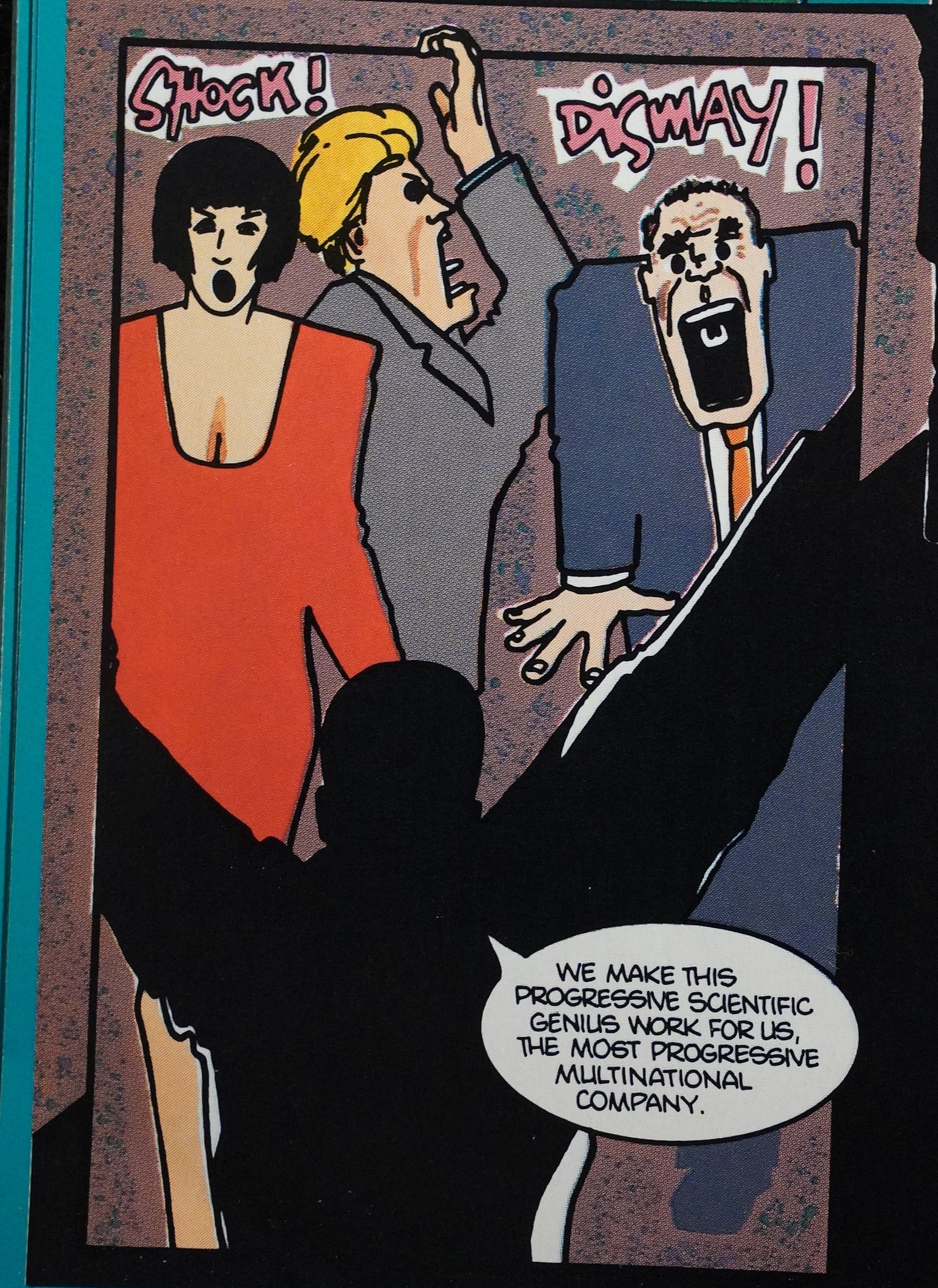 Dave Thorpe’s satirical allegory of present-
day Britain continues with a look at two
British youth cults in issues #3 and #4. The
College of Unlimited Ecstasy is a hedonistic
cult run by the svengali-like Jock McLeod
while another youth group is more anarchic-
ally minded, wearing large spikes on bald
heads implanting music directly into their
brains. “That’s a dig at dependence on the
material world,” said Thorpe, “with the
theory that the more people use machines
the more they merge with them. A person
who uses ther computer a lot will gradually
merge with the computer and a person
working in a sweat shop will gradully begin
to merge with their sewing machine.” The
merge is initiated by a virus. Attempting to
induce all the various youth cults back into
labor is The Ministry of Leisure, once better
known as The Ministry of Employment.
With mayhem raging all around, Tito is
now being mistaken for Doc Chaos, and is
being hunted by the police. He in turn
suspects Eve of being an agent of Doc
Chaos, and it’s business as usual while
everyone is looking for Doc Chaos.
Thorpe has planned the first dozen issues
as self•contained stories with ongoing plot
threads as part of an overall story titled “The
Strange Attractor,” and issues #5 and 6
concern the Gene Police. They’re technolog-
ically advanced dog catchers with hermetic-
ally sealed suits and a large van into which
they throw all mutants en route to Centre For
Genetic Rehabilitation. It’s a pleasant little
place where Doctor Bedlam gets to perform
unspeakable experiments on the mutants,
who’re not the cuddly super-powered types
found over at Marvel. That story is titled
“Splice My DNA.” Well, it made me laugh.

Apparently more issues were made? But never published?