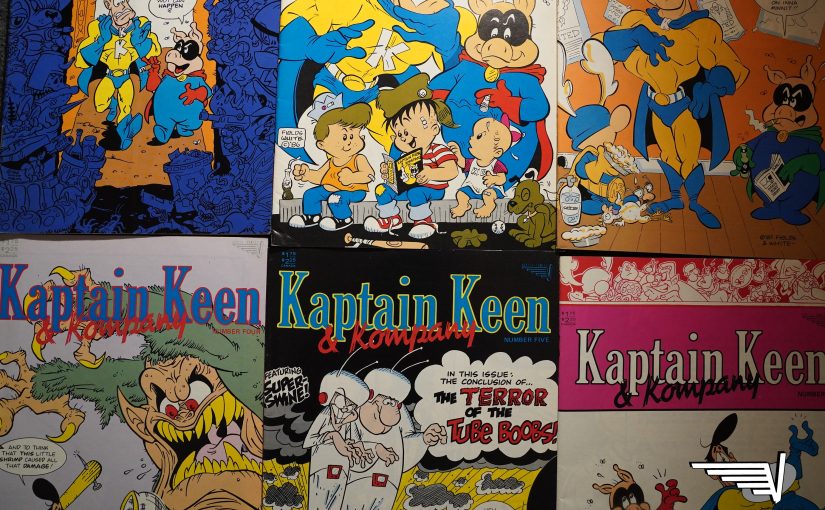 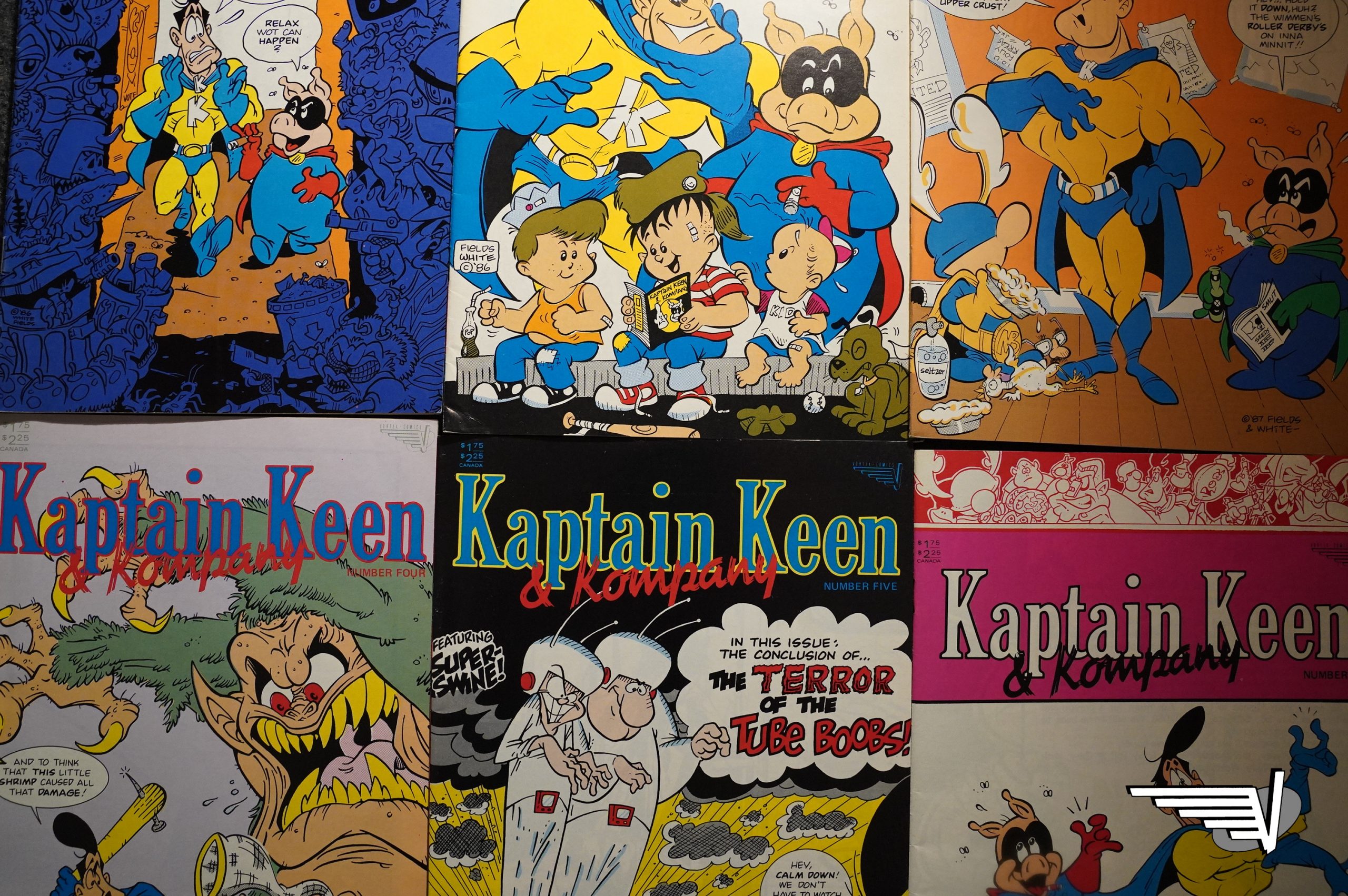 This is one of the Vortex series that’s most unfamiliar to me. I think I picked up one issue over the years, but I’m reading the rest for the first time today.

And why is that, if I was such a Vortex fanboy as a teenager? Because it’s from late 1986, when the Black and White Boom was in full swing: “Investor” hysteria had everybody buying any comic, as long as it was in black and white… for a few months. This meant that a shitload of shitty comics were pumped out by unscrupulous hustlers and hucksters, and I (naturally assumed that this was one of those). 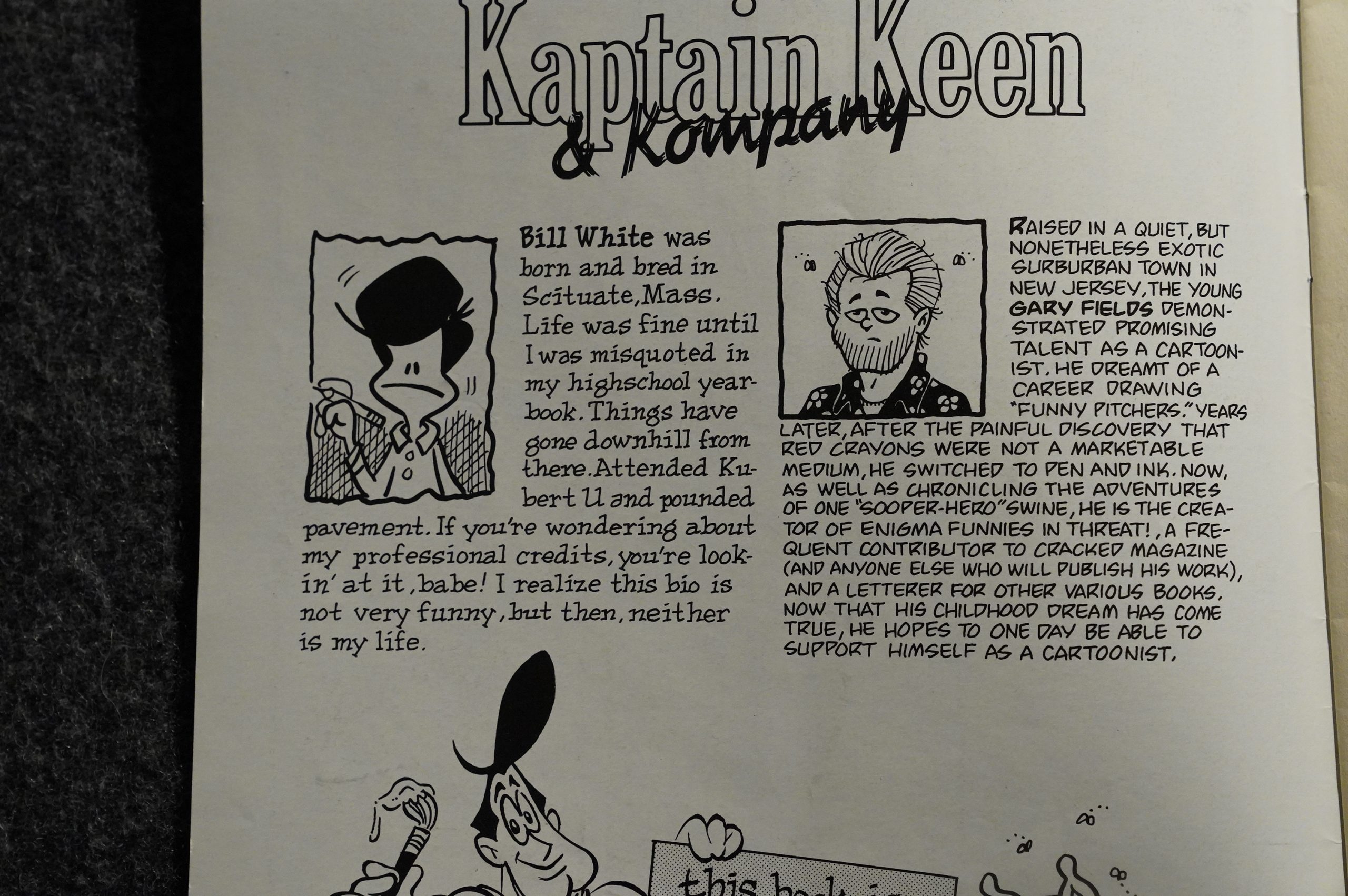 On the other hand, these “investors” weren’t actually reading what they bought, so the same phenomena allowed talented people to publish some odd and worthwhile comics for a while.

So what part of that quality gamut does this land on? Let’s read the first three pages: 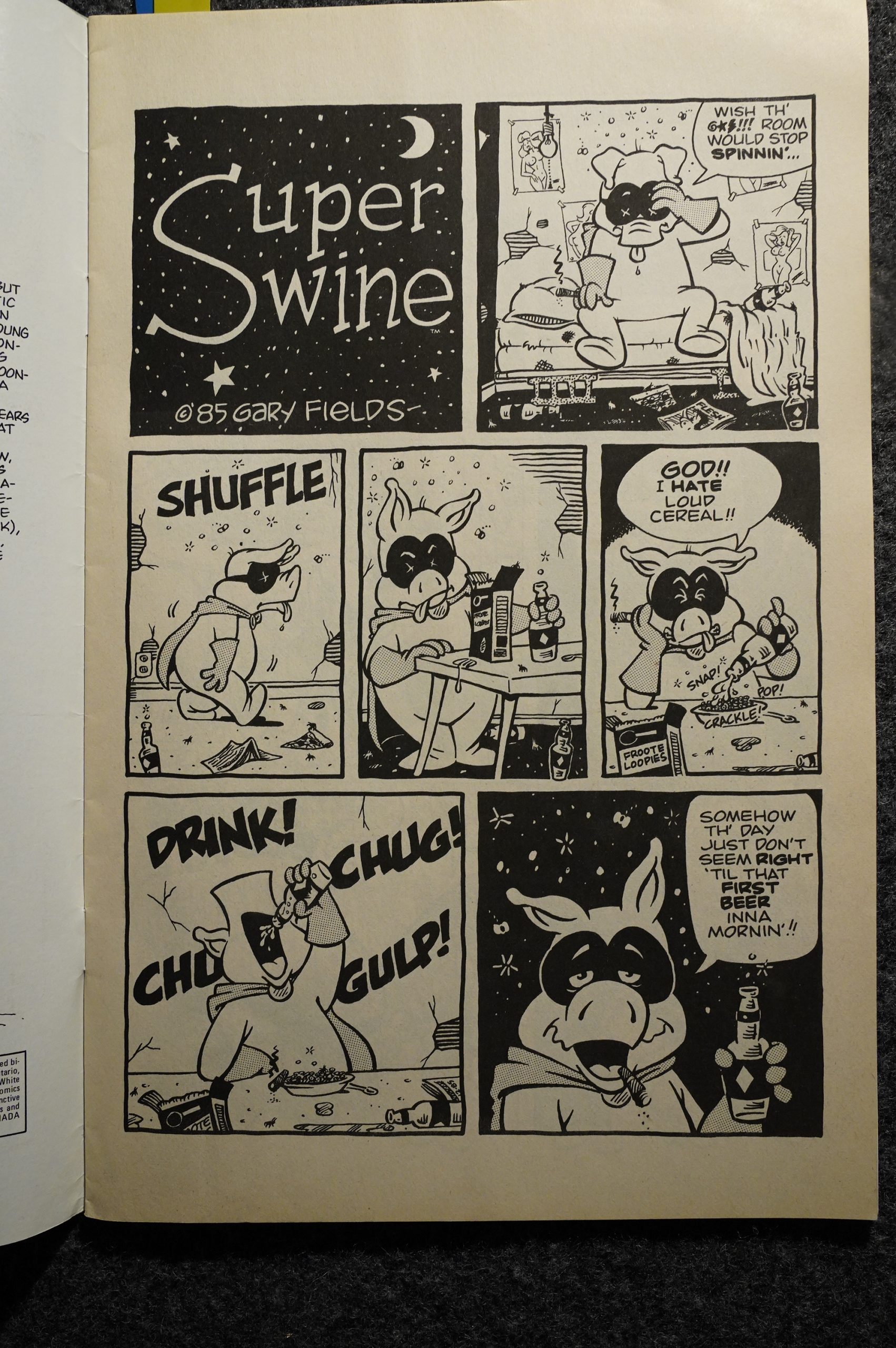 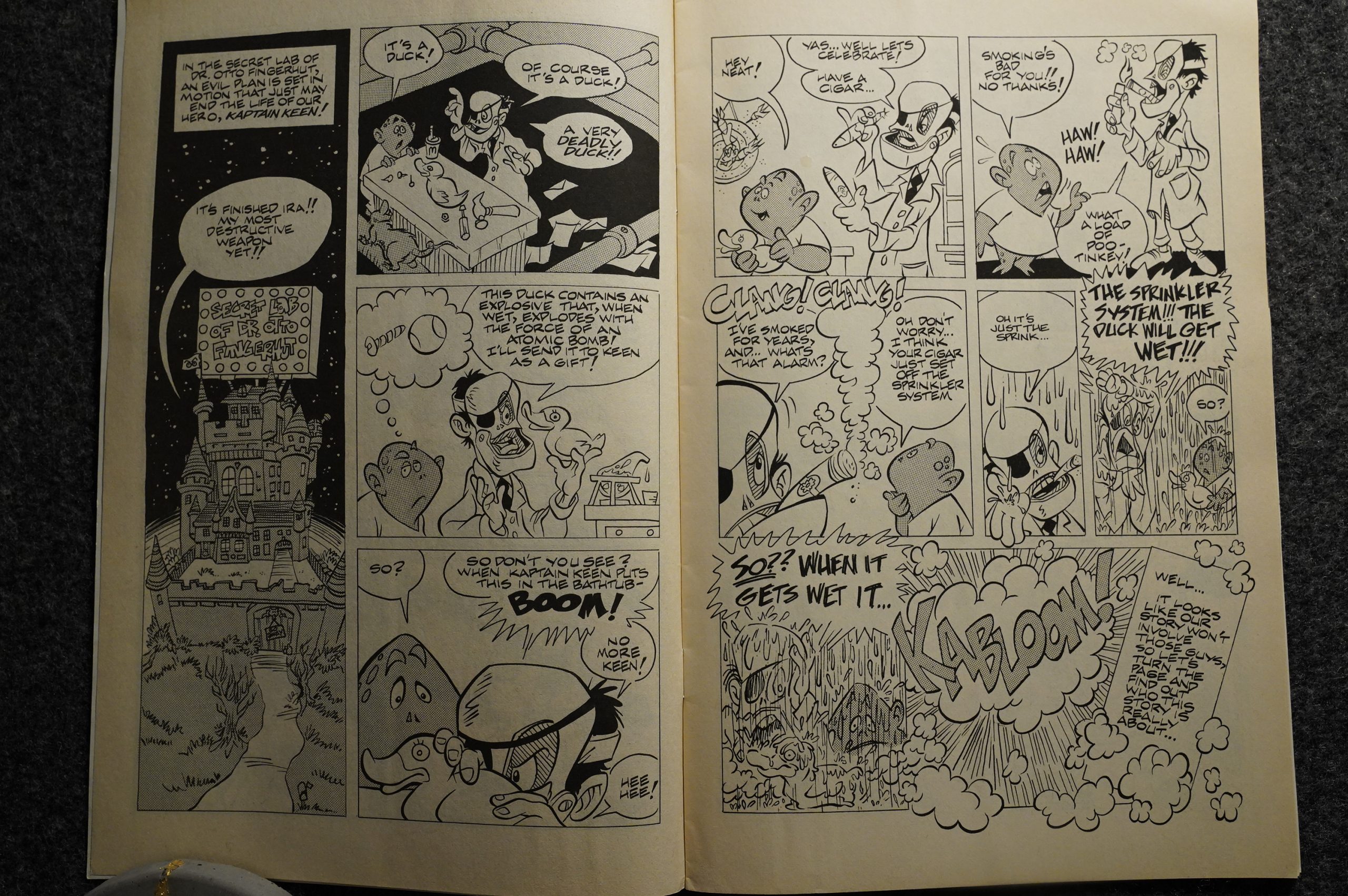 OK… this is definitely not shat out to land in the nearest Mylar poly bag, but displays some talent. It’s a pretty fun way to start a series. 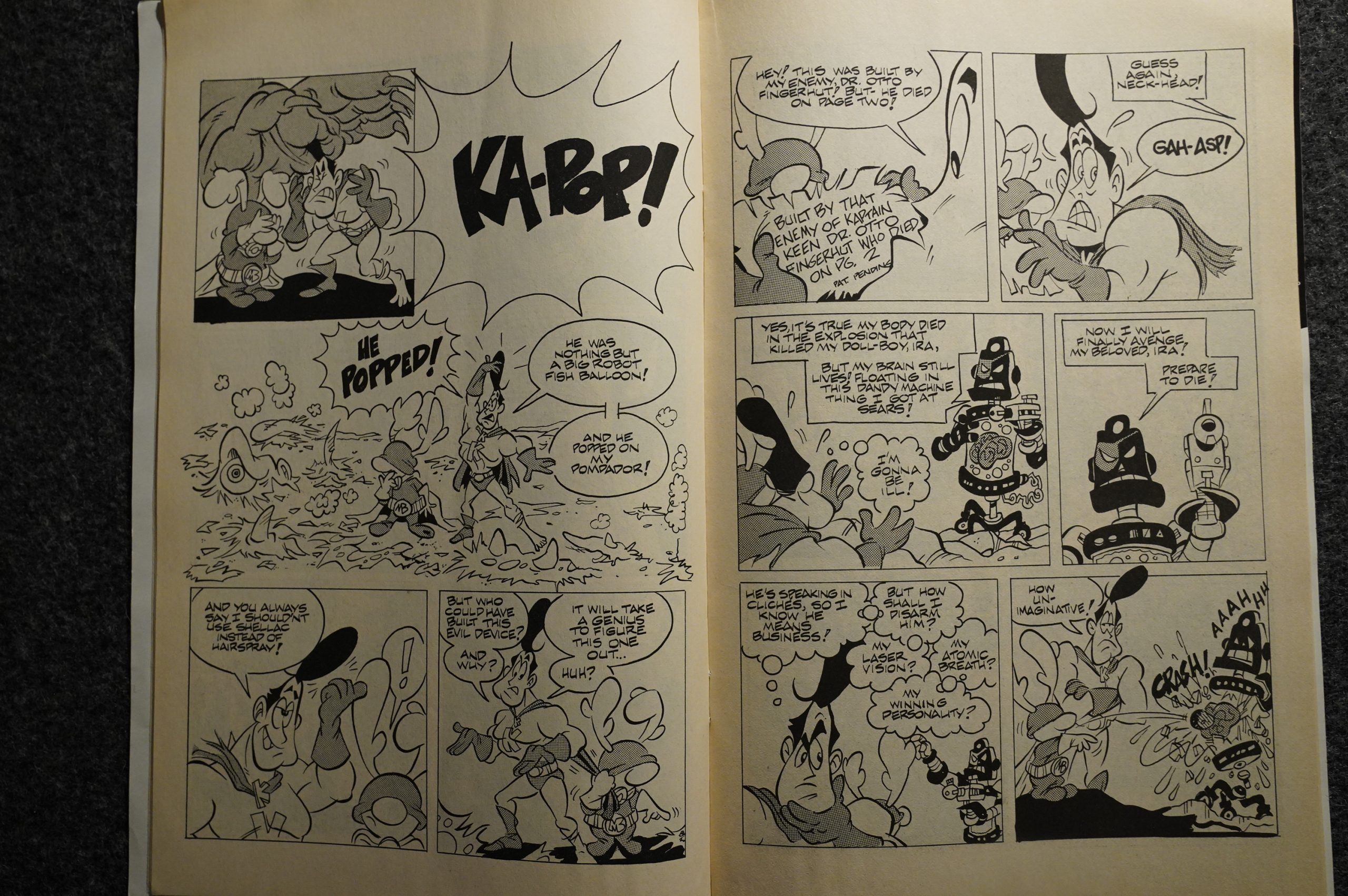 But while it looks charming in a kinda standard way, the skills are sometimes a bit lacking. I’ve looked at these pages several times now, and I still don’t know exactly what Moose Boy is throwing at that robot guy. I mean, not that it matters, and the abruptness is the gag, but it’s still just not… quite… there. 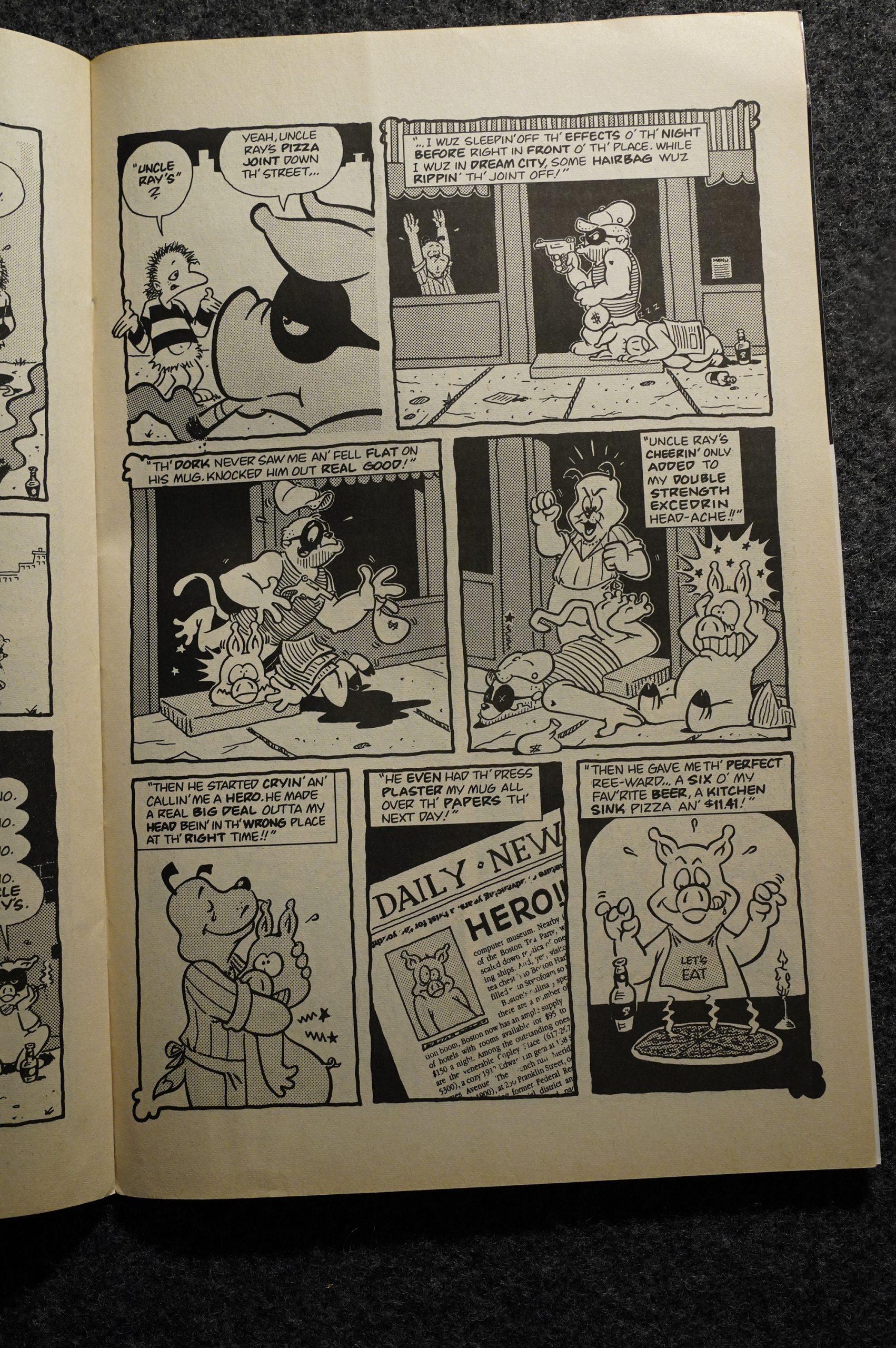 The name on the cover is Kaptain Keen, but there’s probably more Superswine pages in here. As each issue is just 24 pages long, that doesn’t leave a lot of Keenity. 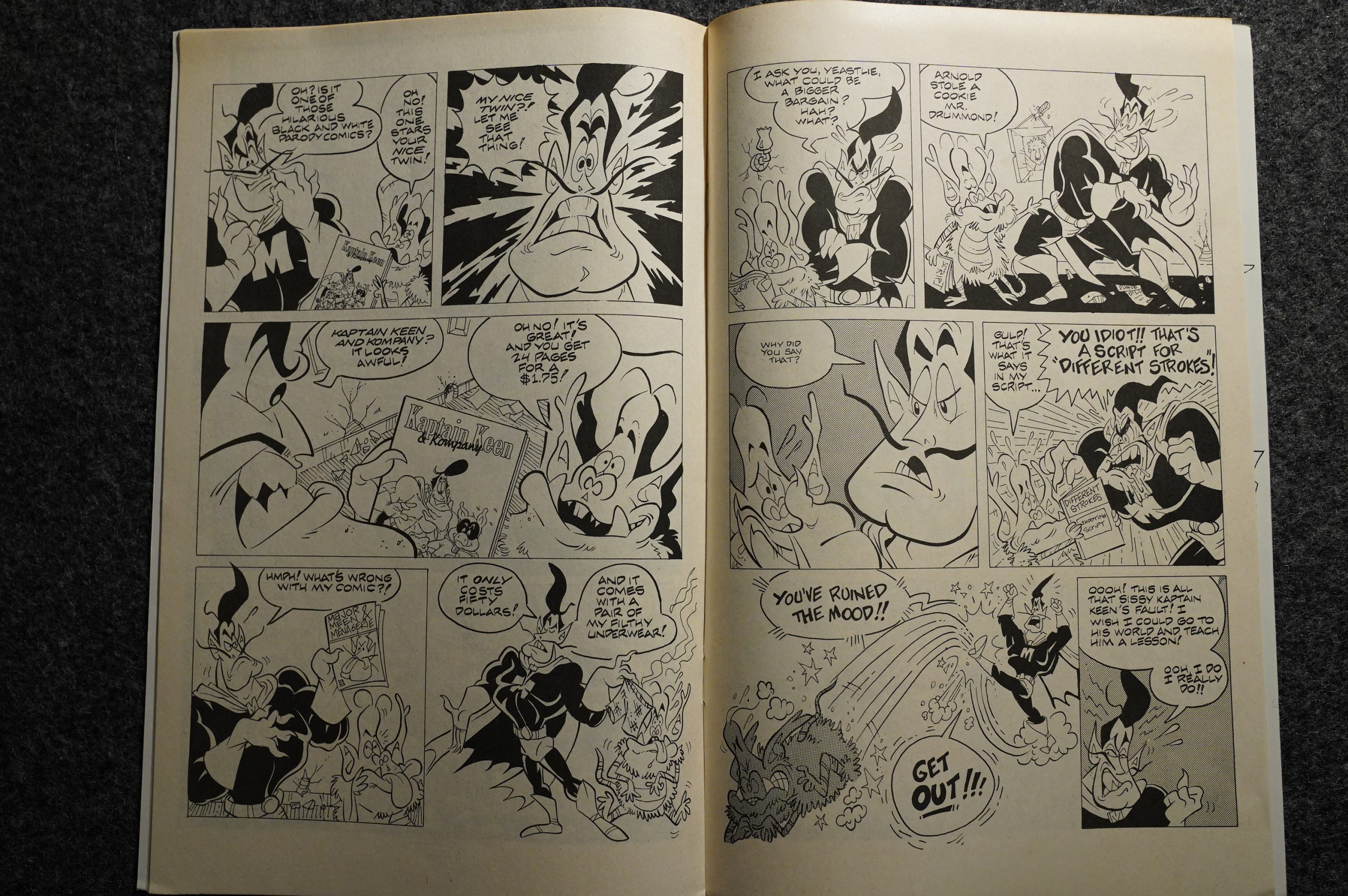 Hey! That sounds like a comics promo device that somebody should try! 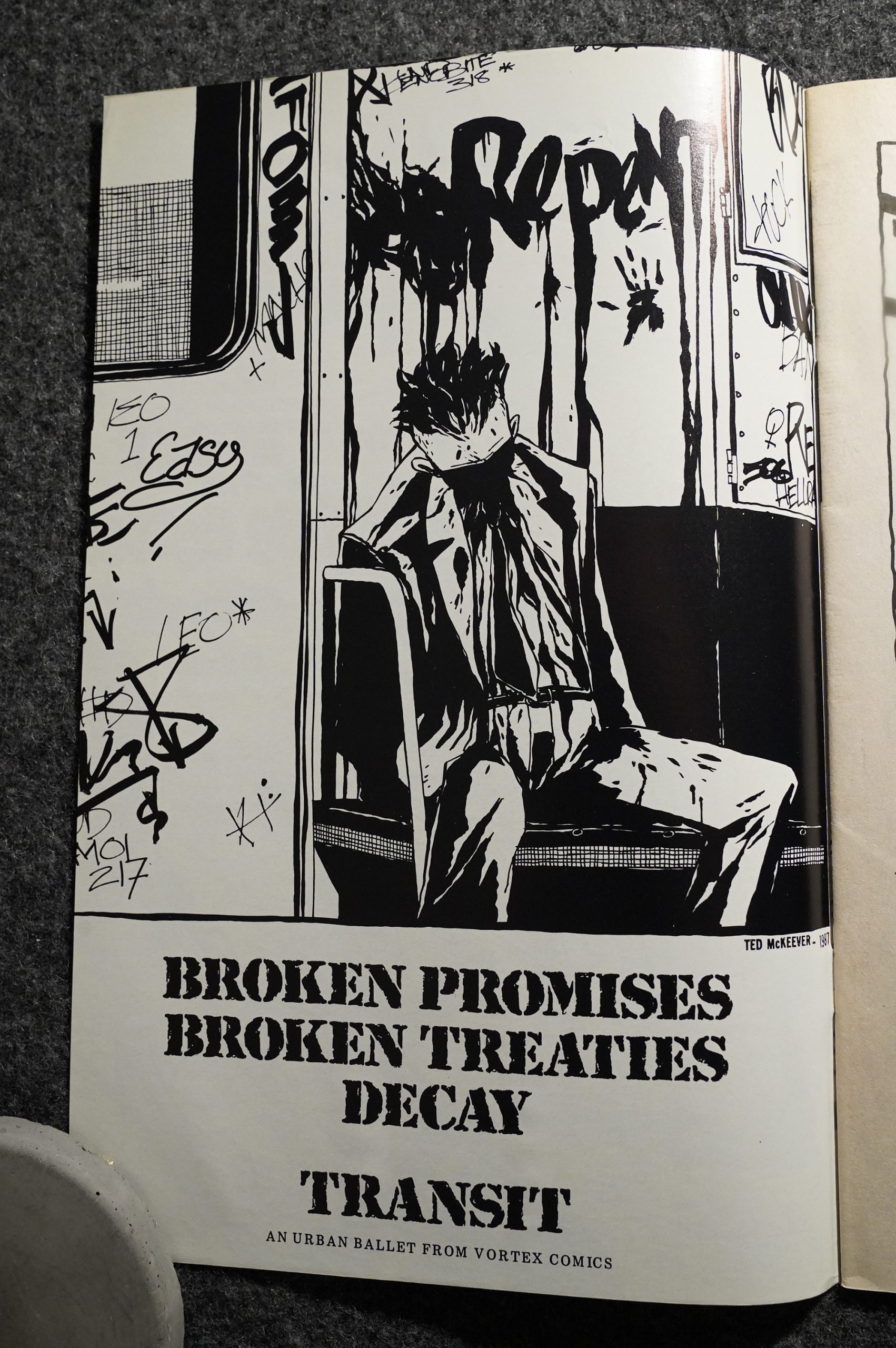 Cool ad for Transit, but… “Decay”? As a selling point? Well I guess. 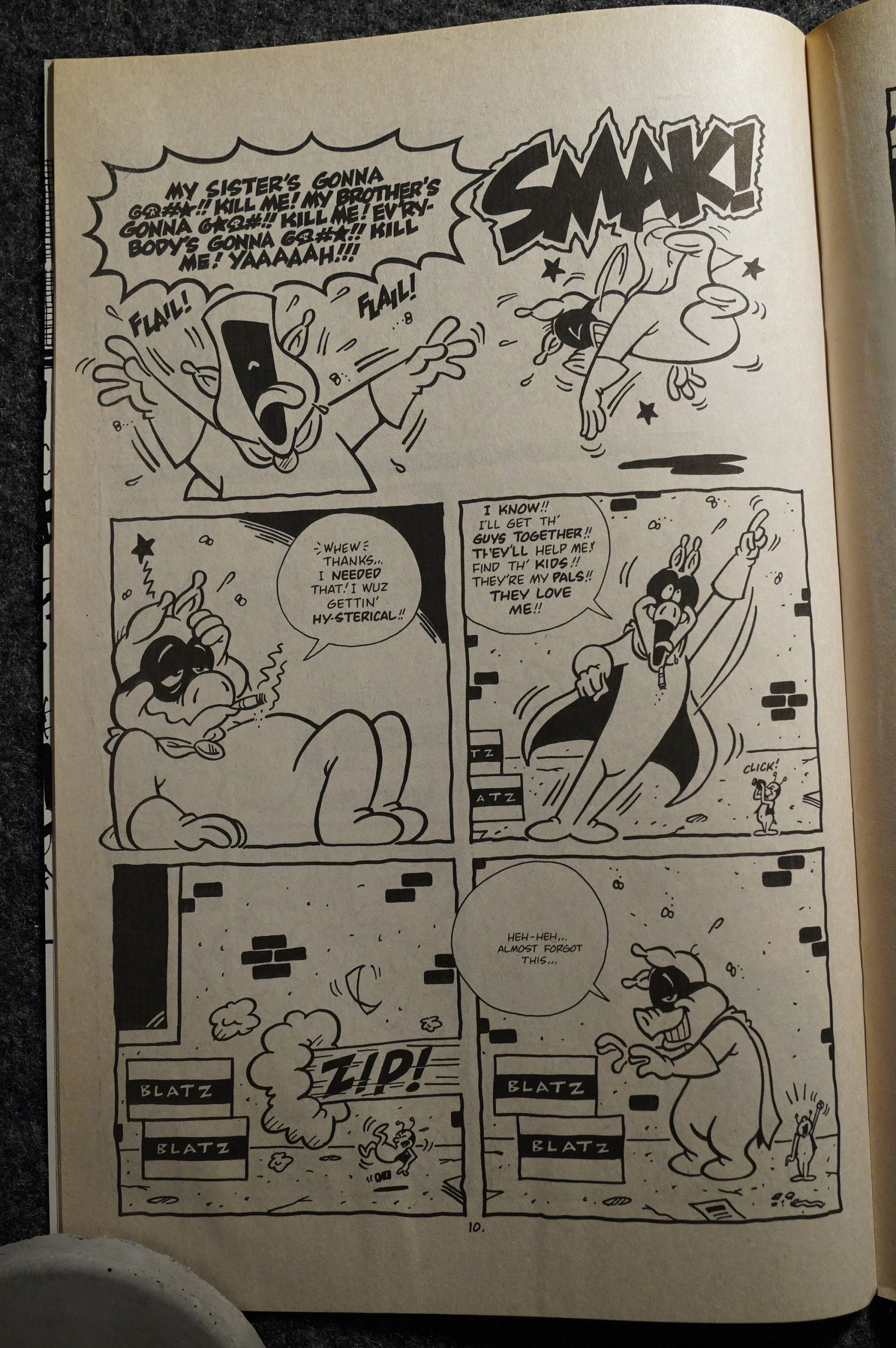 So speaking of overreach… here’s Superswine slapping himself because he’s getting hysterical, which is a good gag, but… can you actually tell that that’s what he’s doing, or do you just deduce it from the narrative of the scene? 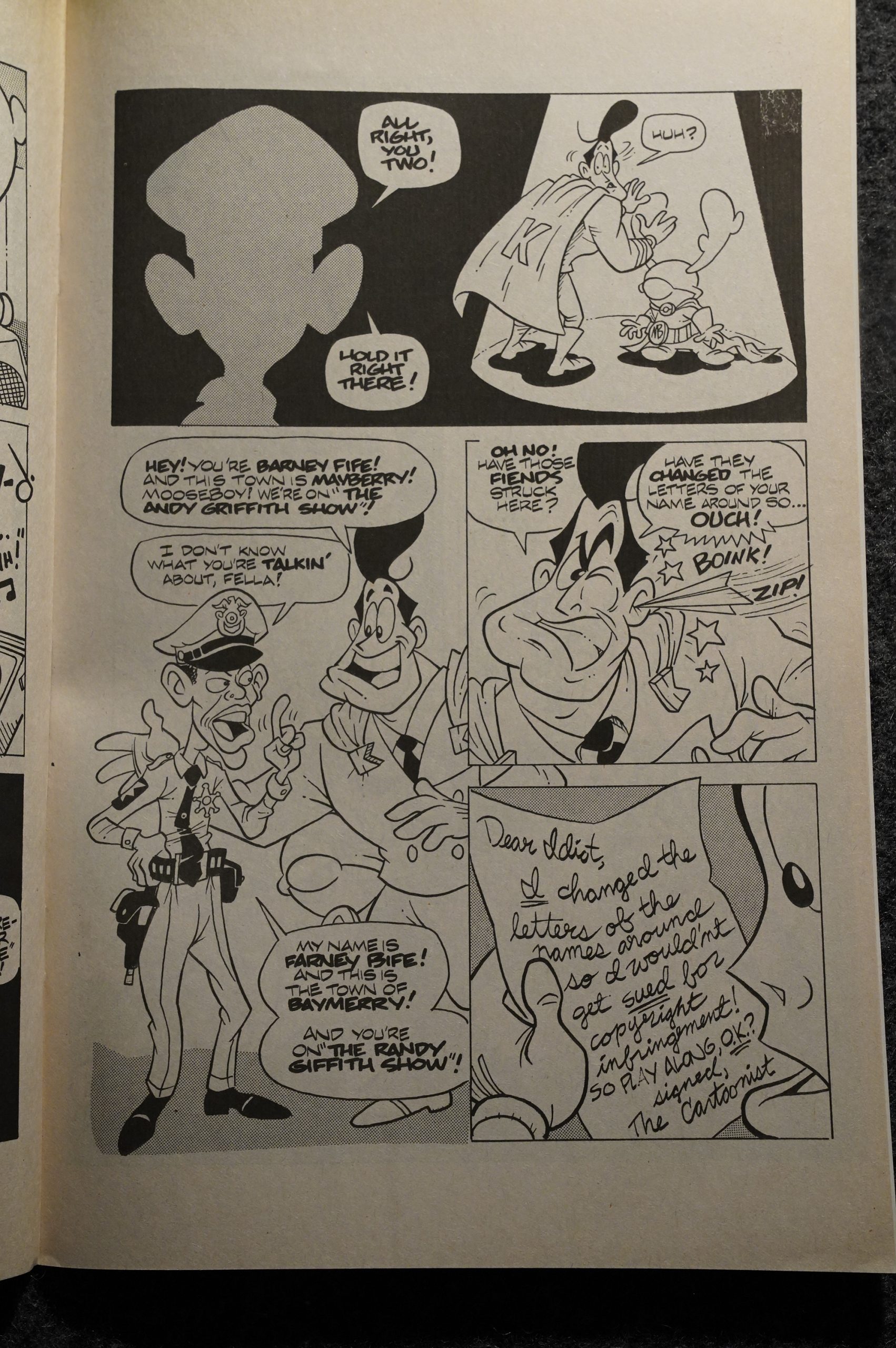 There’s some meta humour in here, but less than you’d expect. 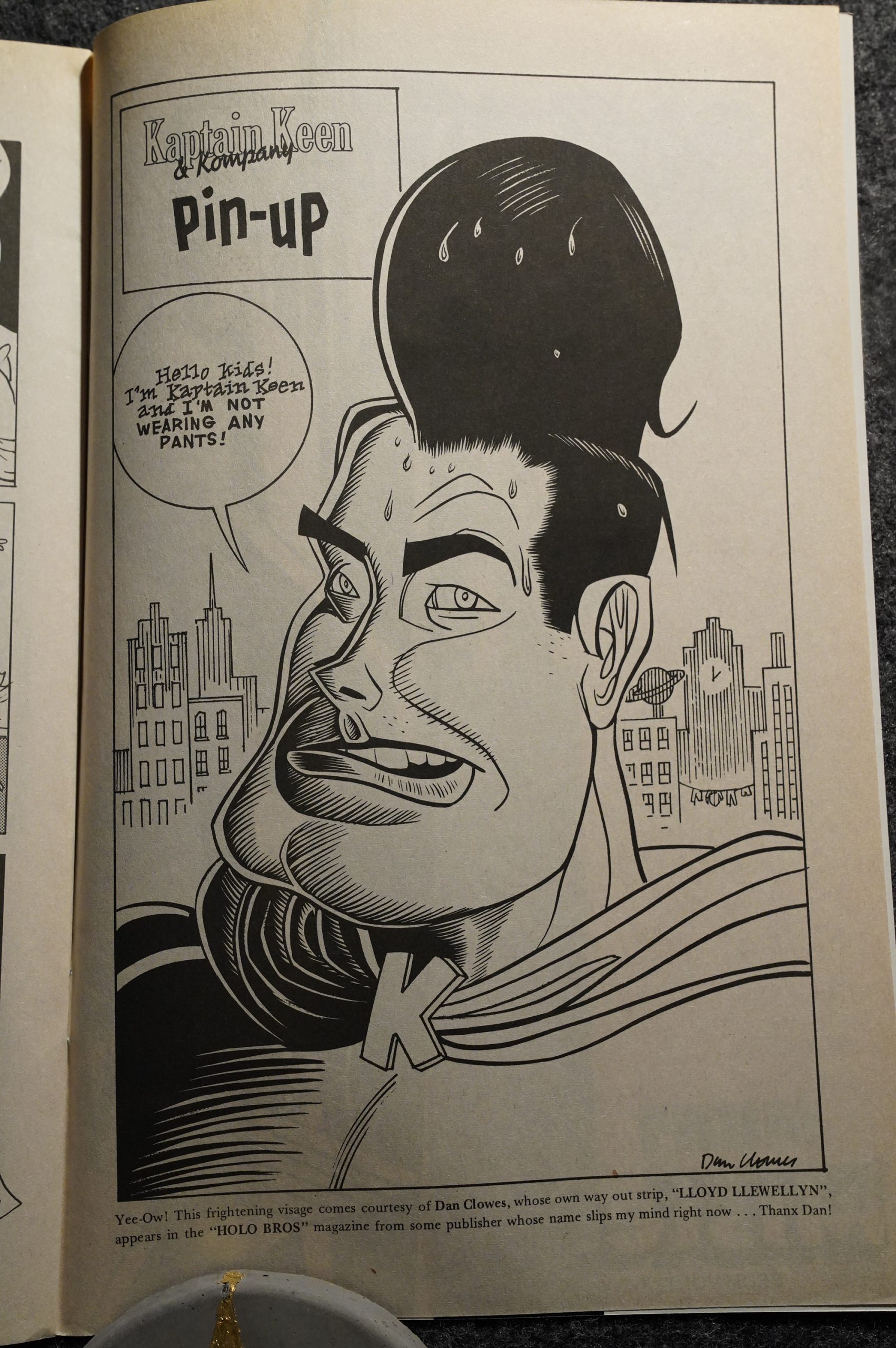 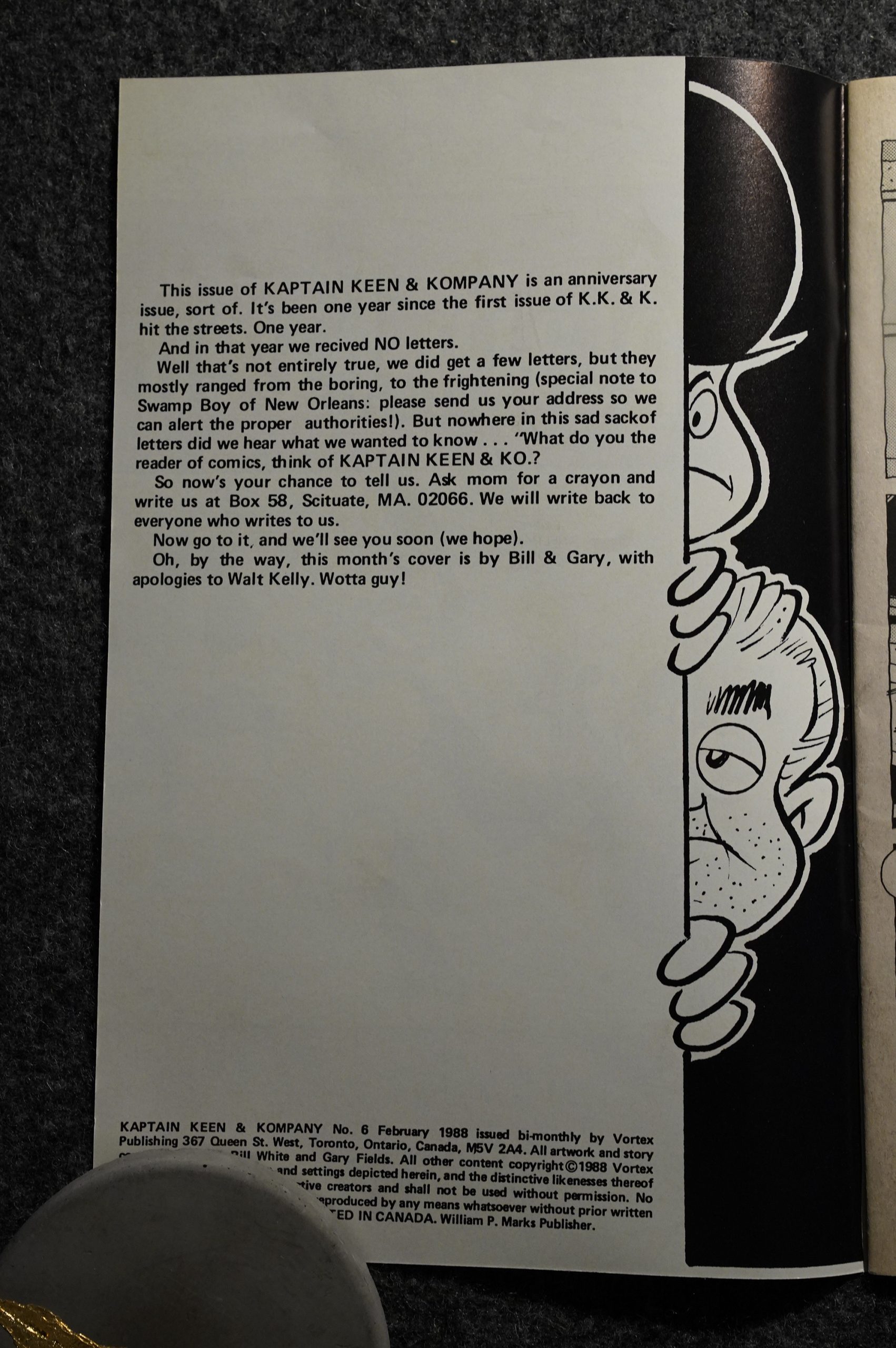 In the sixth and final issue, the creators complain about not getting any letters. I’m guessing the reason was that few who bought the series read it… 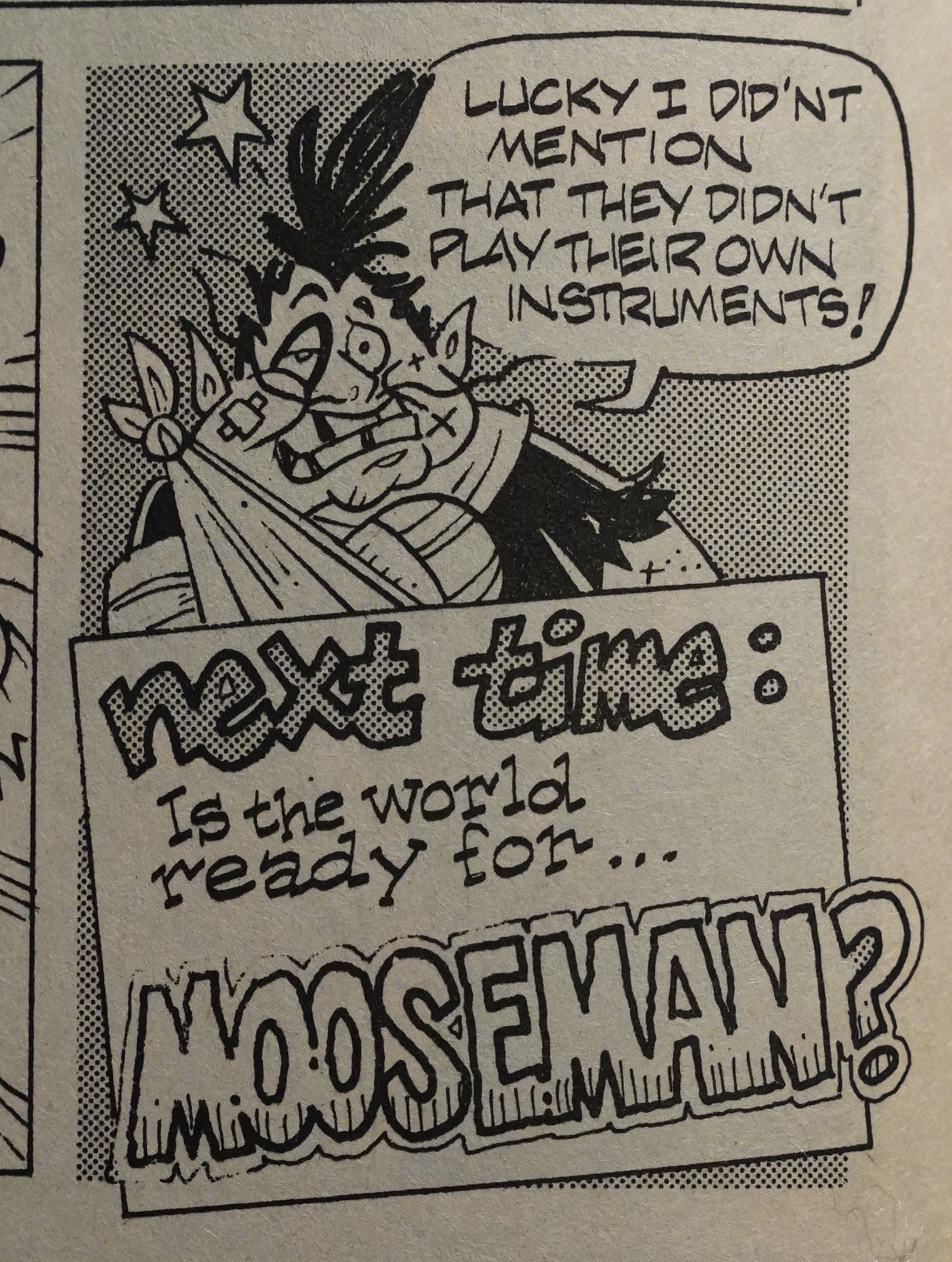 And we end the series with the traditional way of saying the series has been cancelled: A “next time” panel.

I wonder whether anybody reviewed it at the time…

Somebody writes a preview in Amazing Heroes #133, page 99:

Kaptain Keen will continue to toss adult-
level satire from behind the seemingly
innocuous facade. The big news here is
that KK has been optioned for a possible
Saturday morning animated program.
Should this actually happen, there is a
possibility that the book might change
somewhat, in order to be consistent with
the TV show.

According to Vortex publi9her Bill Marks,
Kaptain Keen and Kompany will change
slightly in the next few issues, as there will
be more of an emphasis on continued
storytlines. He also says the book will try
to maintain its juvenile-look/adult-appeal.
“Like Rocky and Bullwinkle, this book will
continue to toss adult-level satire from
behind the seemingly innocuous facade”

And… that’s it. Not a single review in Amazing Heroes or The Comics Journal.

Kaptain Keen did not continue after being cancelled, but Superswine has been published by several companies over the years. But apparently the only person who’s written anything about it is me.