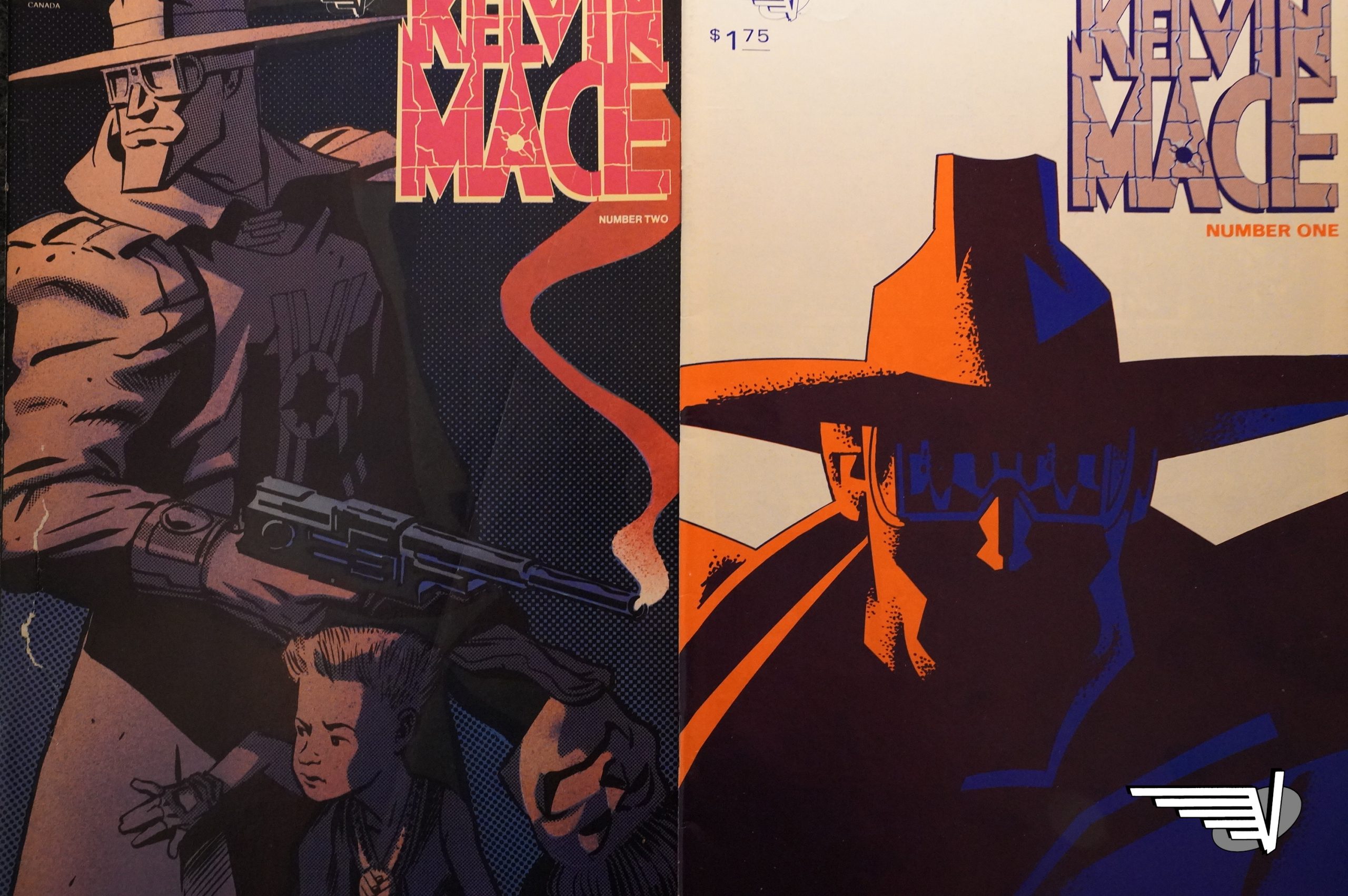 Ty Templeton introduced Schönefeld in Stig’s Inferno as a young guy mainly working in the commercial illustration business, and was therefore swimming in money… But after the Templeton lured Schönefeld back to the comics business, and they collaborated on several things, and Schönefeld also coloured books like Mister X. 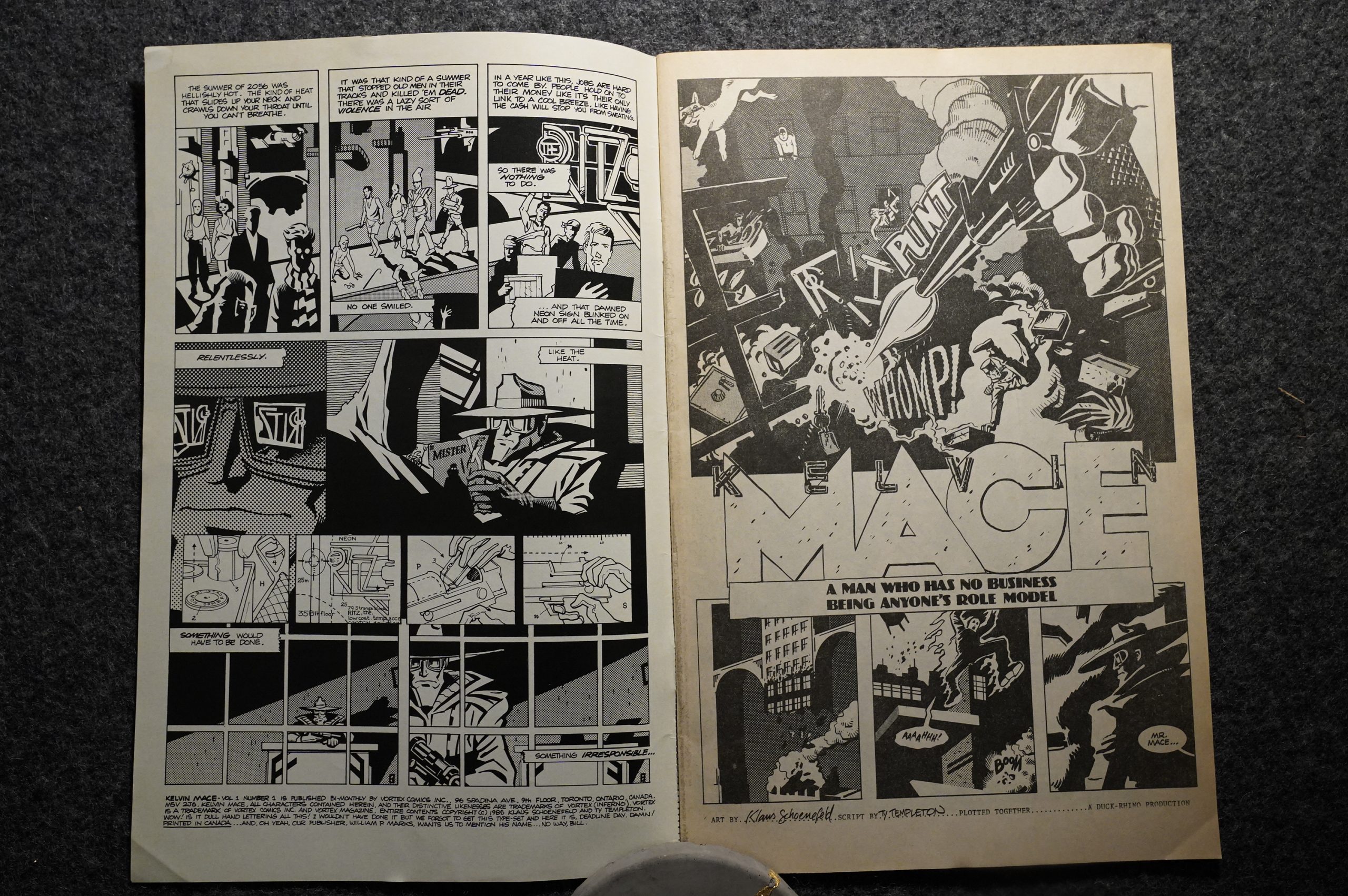 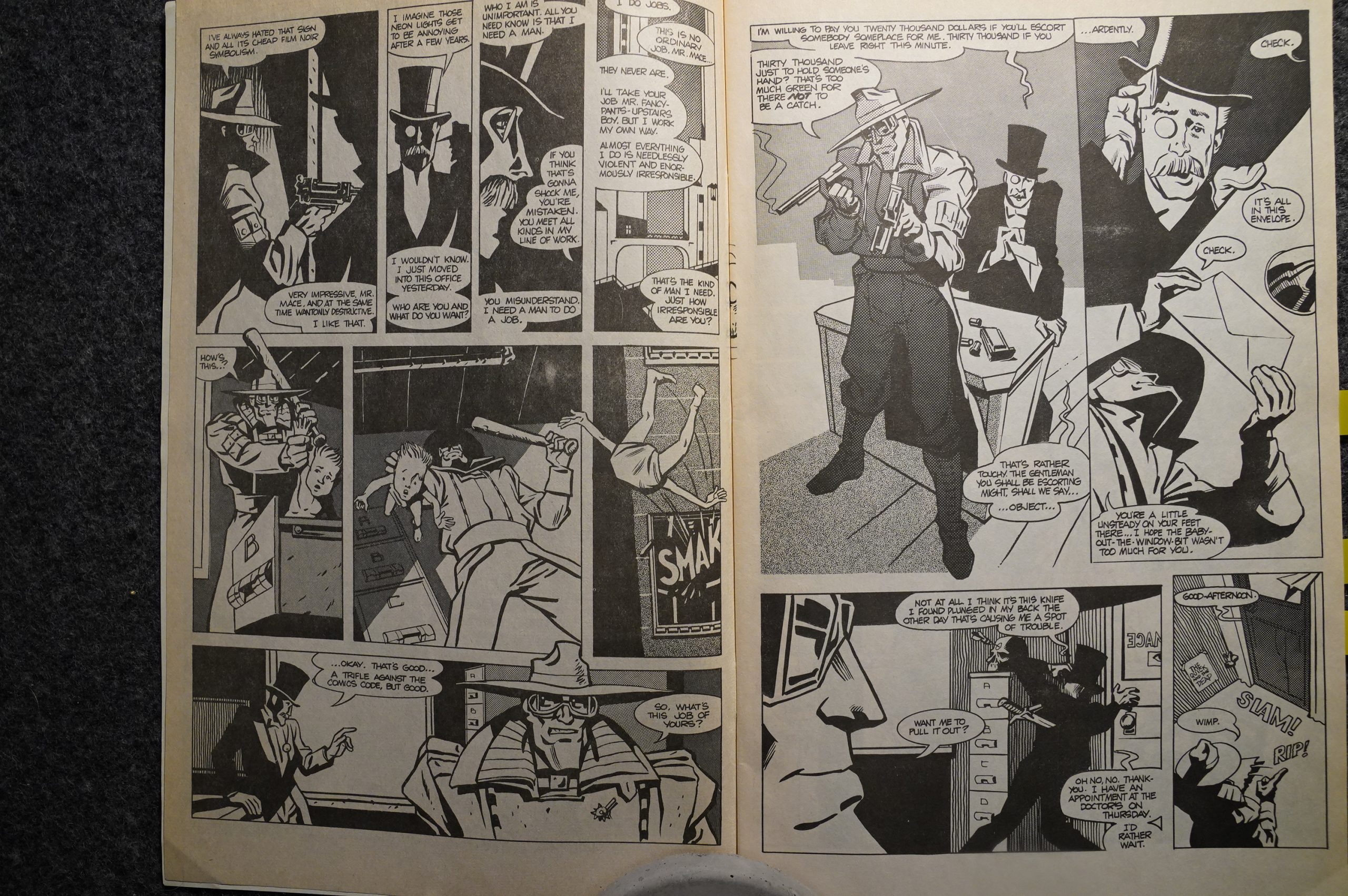 Schönefeld does the artwork here, and Templeton wrote the words? I would have guessed that Templeton did some of the artwork, too, but Schönefeld seems like an incredibly talented chameleon: Some of those lines look very Templeton, while others (like the guy in the hat) don’t at all.

The humour is definitely more bratty than Stig’s Inferno — the main gag is that Mace is a super-violent, stupid buffoon, which is a tried and true character, but can easily tip over into sheer edge lord tedium. I think they manage to make it work here: The baby-out-the-window gag is suitably outrageous, but it turns out that he’s not really hurt (on the next page; he’s actually Mace’s trusty side kick). 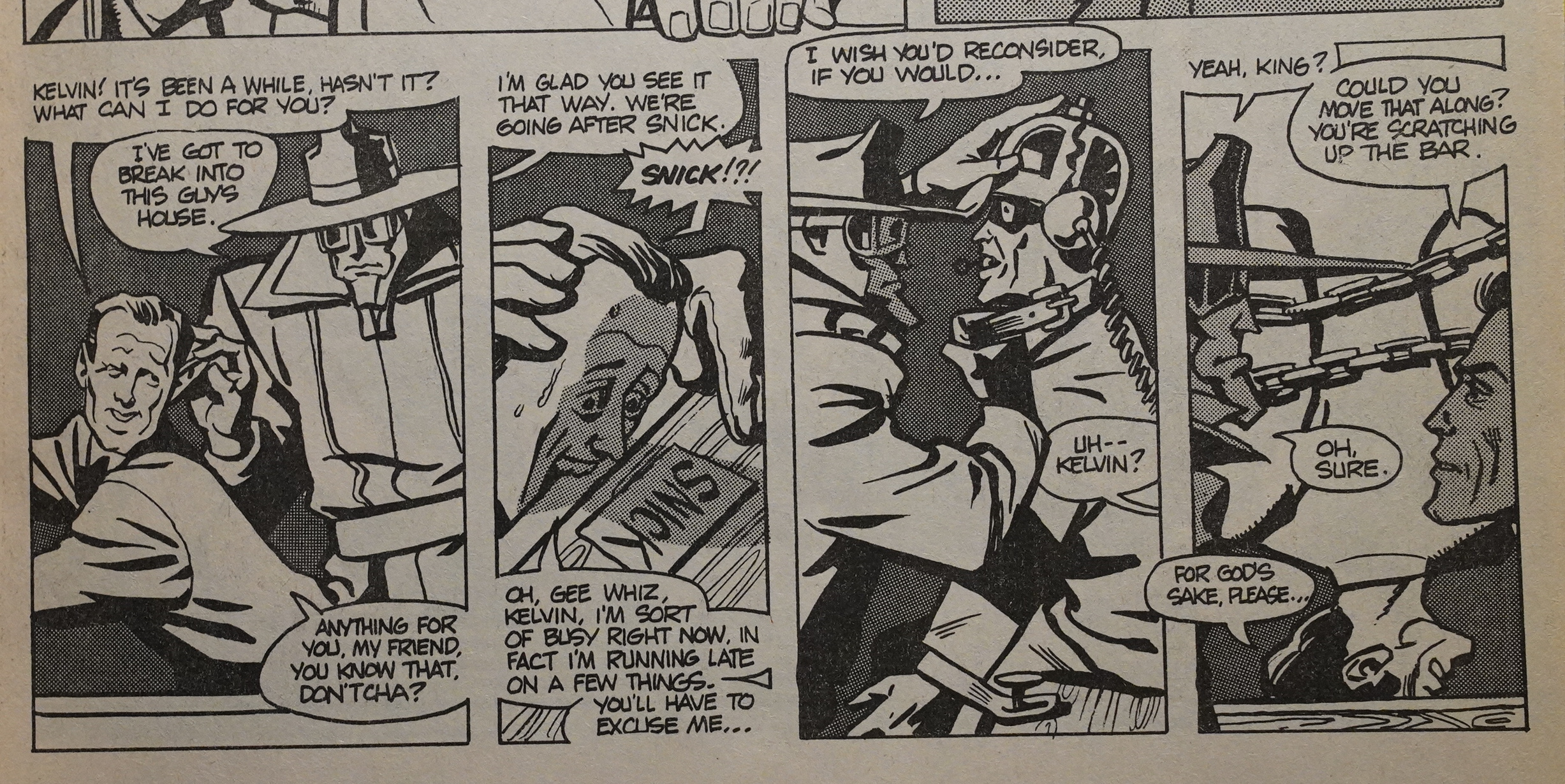 The sheer manic absurdity really works here, I think, with suitable insane escalation over these four panels. I love the juxtaposition in the first panel between the guy trying to escape out of the panel (and away from Mace) while keeping up the pleasant conversation, to Mace putting him into some kind of… torture apparatus in the third panel (still with the polite conversation), and… what’s even going on in the fourth panel? 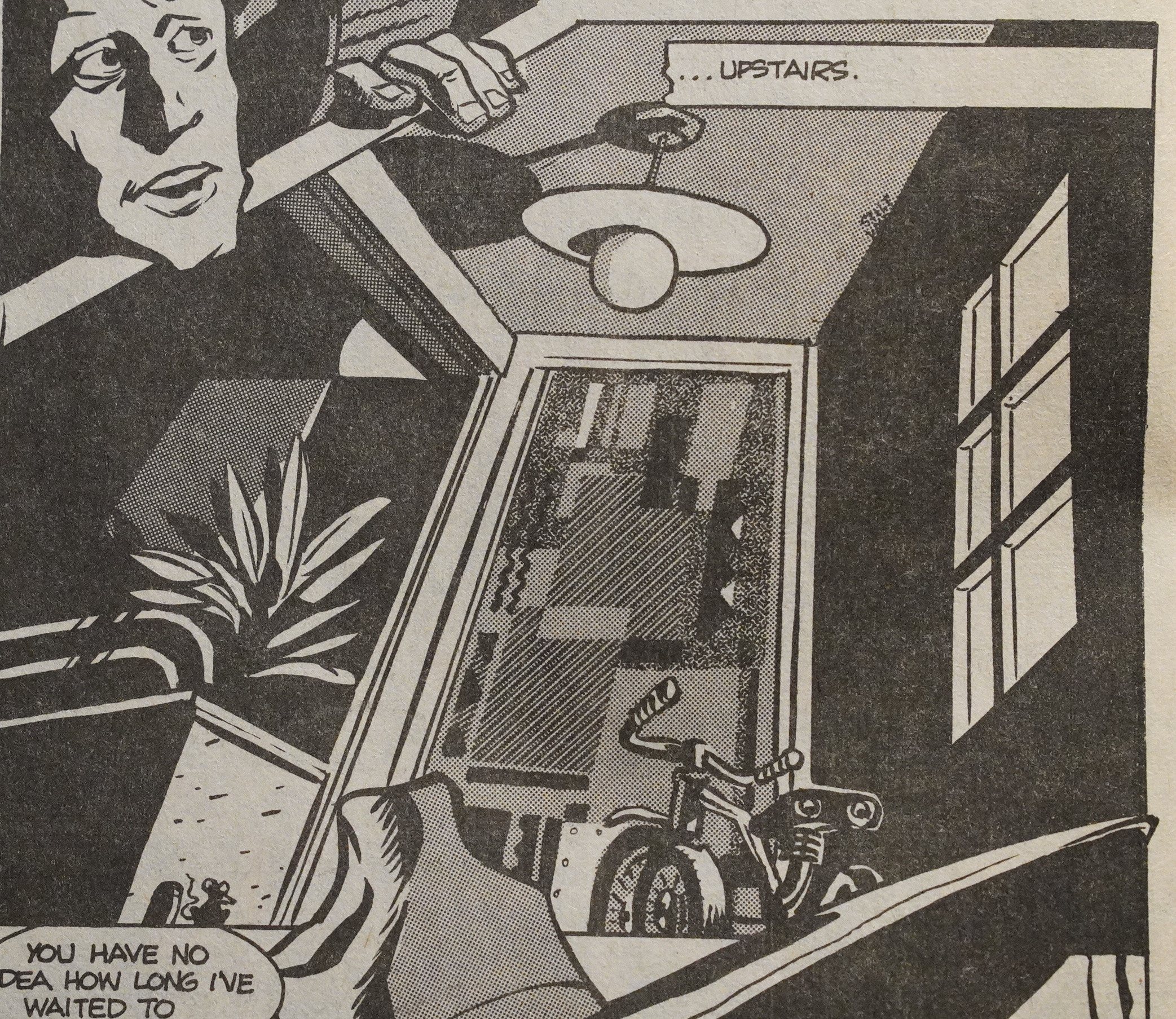 The printing on this issue is really awful, though. Sure, it’s newsprint and you can’t expect miracles, but it’s pretty horrendous, especially what with Schönefeld doing these absurdly intricate panels, and zip-a-tone all over the place. 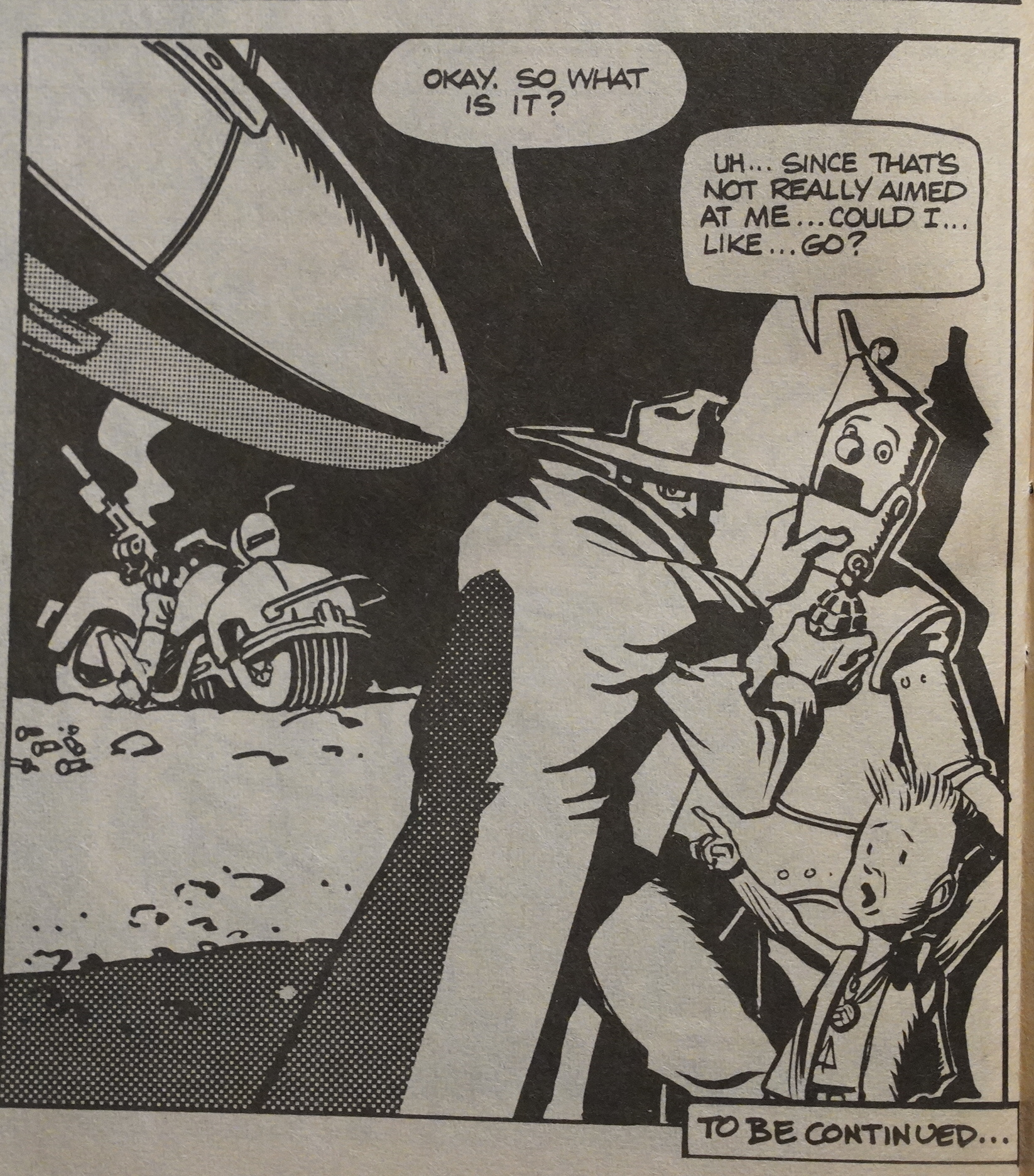 And we end on a cliffhanger. 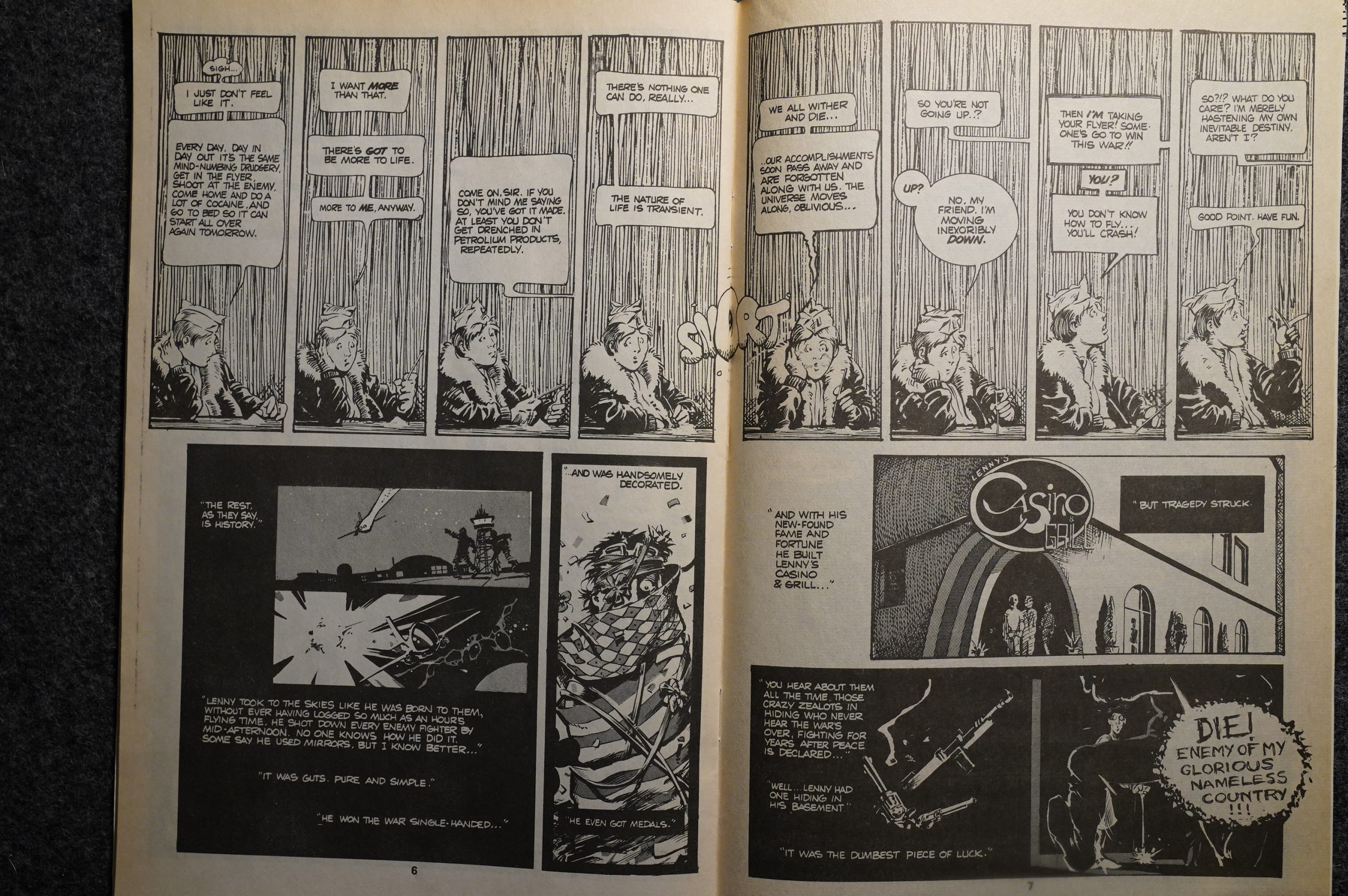 And then there’s a backup story written by Templeton with artwork by Mike Dringenberg? It’s a story with a very different tone than the main feature, so it’s an odd choice. 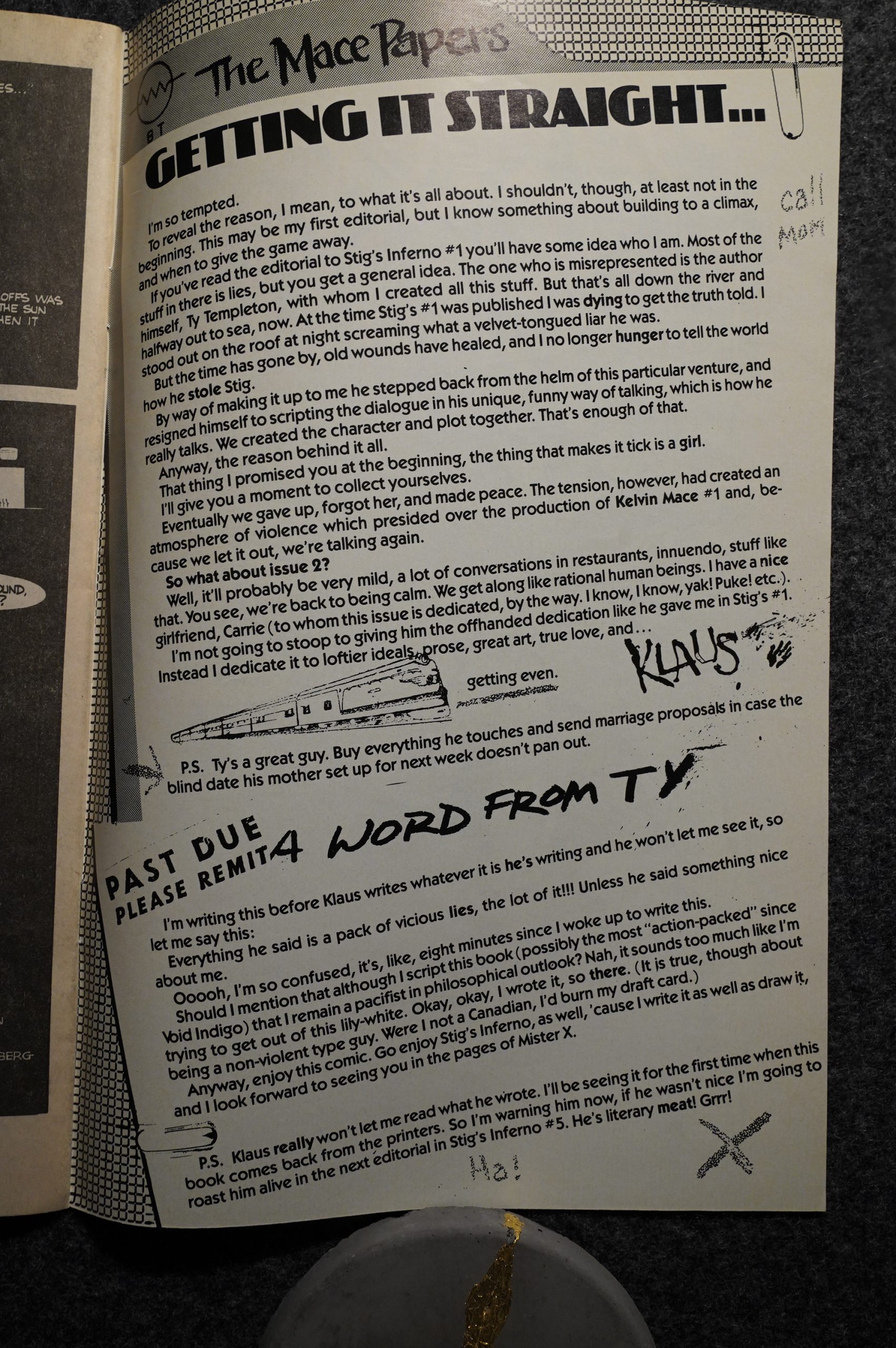 Schönefeld (and Templeton) get some words in.

So that’s the first issue: It’s totally jam-packed. It’s got so many gags going on each and every page that the cumulative effect starts getting to you after a while: Everything becomes really funny even if any single joke isn’t that brilliant.

So… thumbs up! A really solid start. 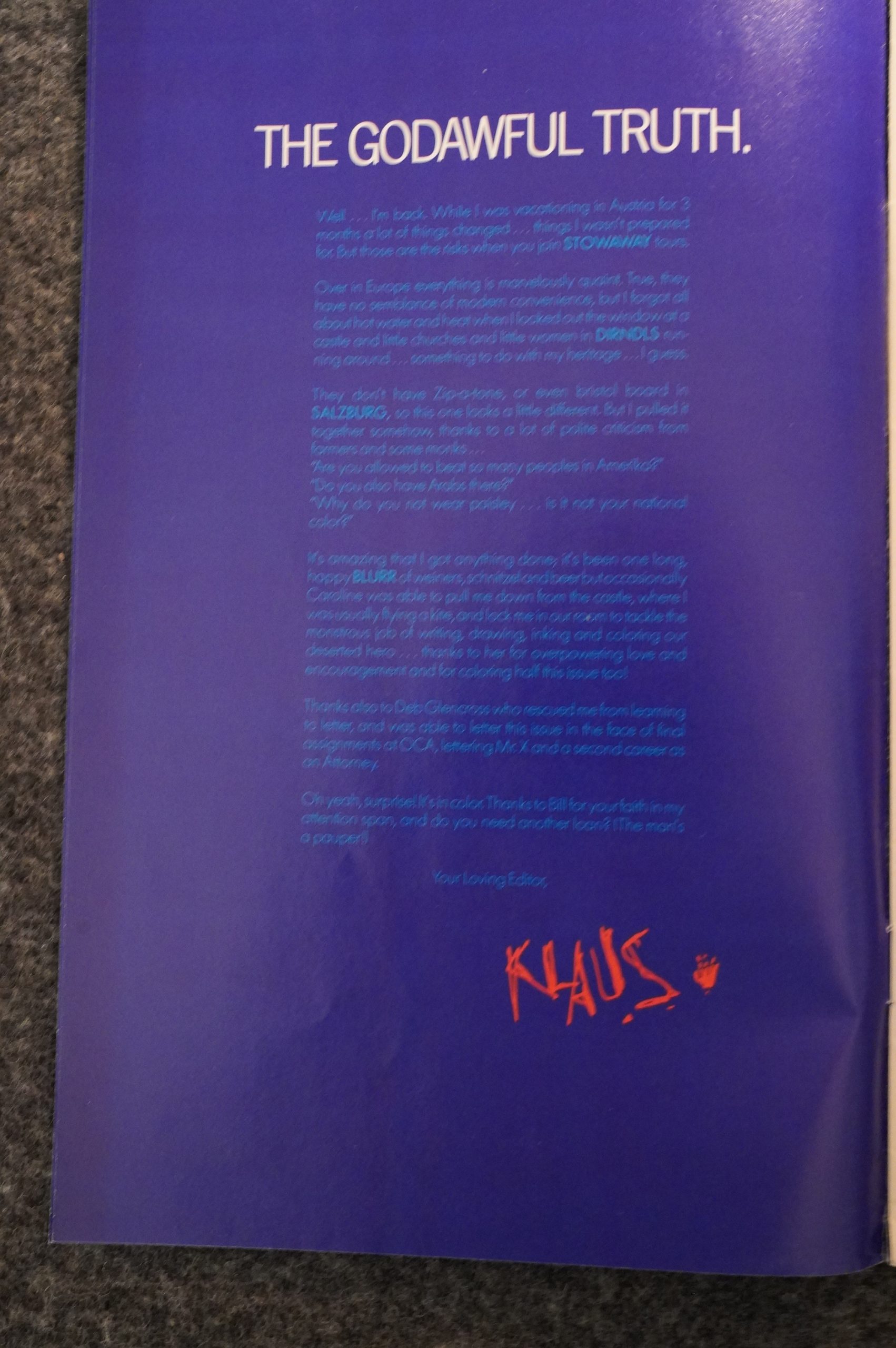 And then the second issue arrives some time later, and it’s in colour, and Schönefeld apparently did it (without any Templeton involvement) while Schönefeld was on holiday in Europe? I wonder whether he got any inspiration from being in Europe… Let’s read the first three pages. 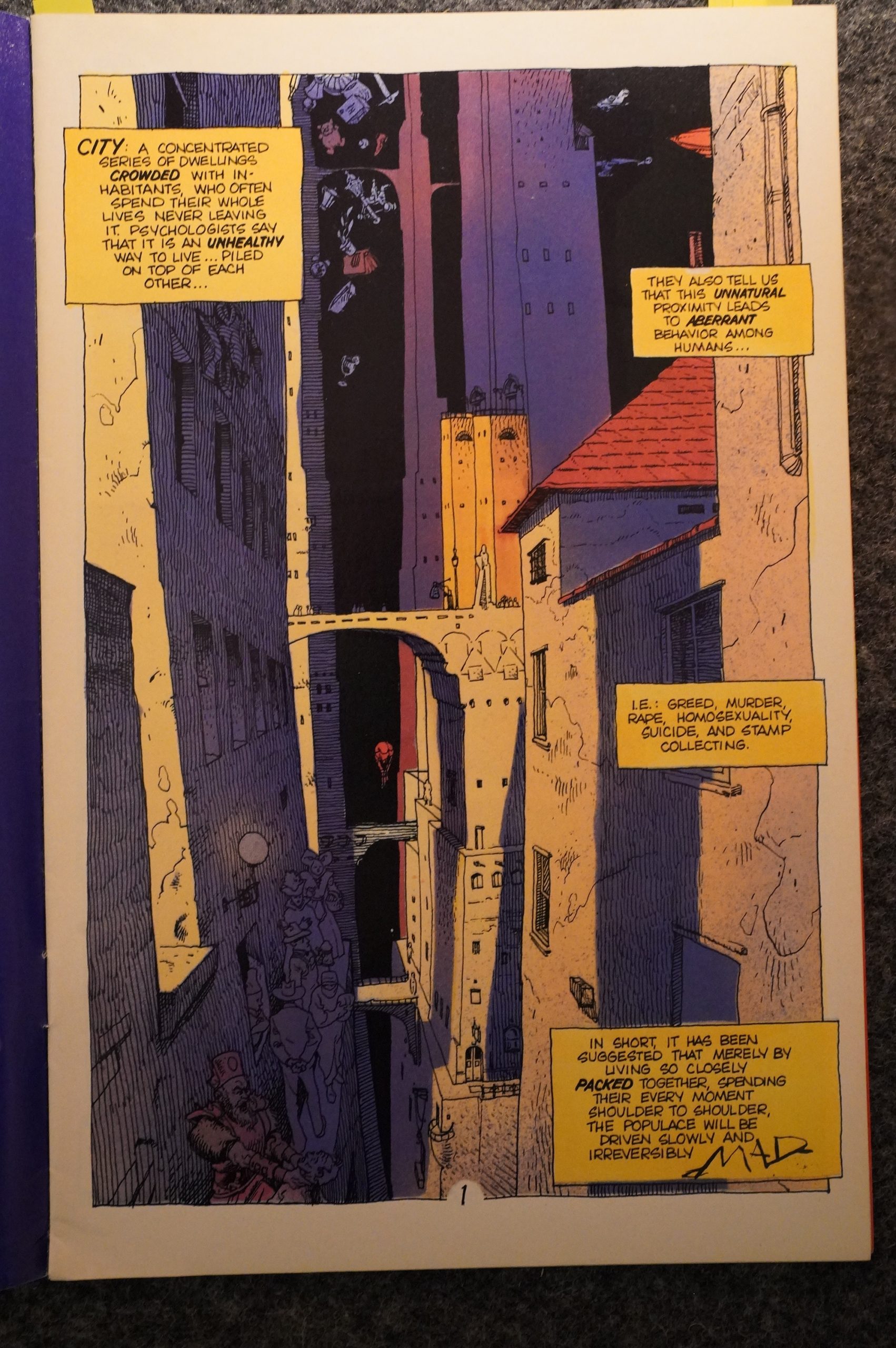 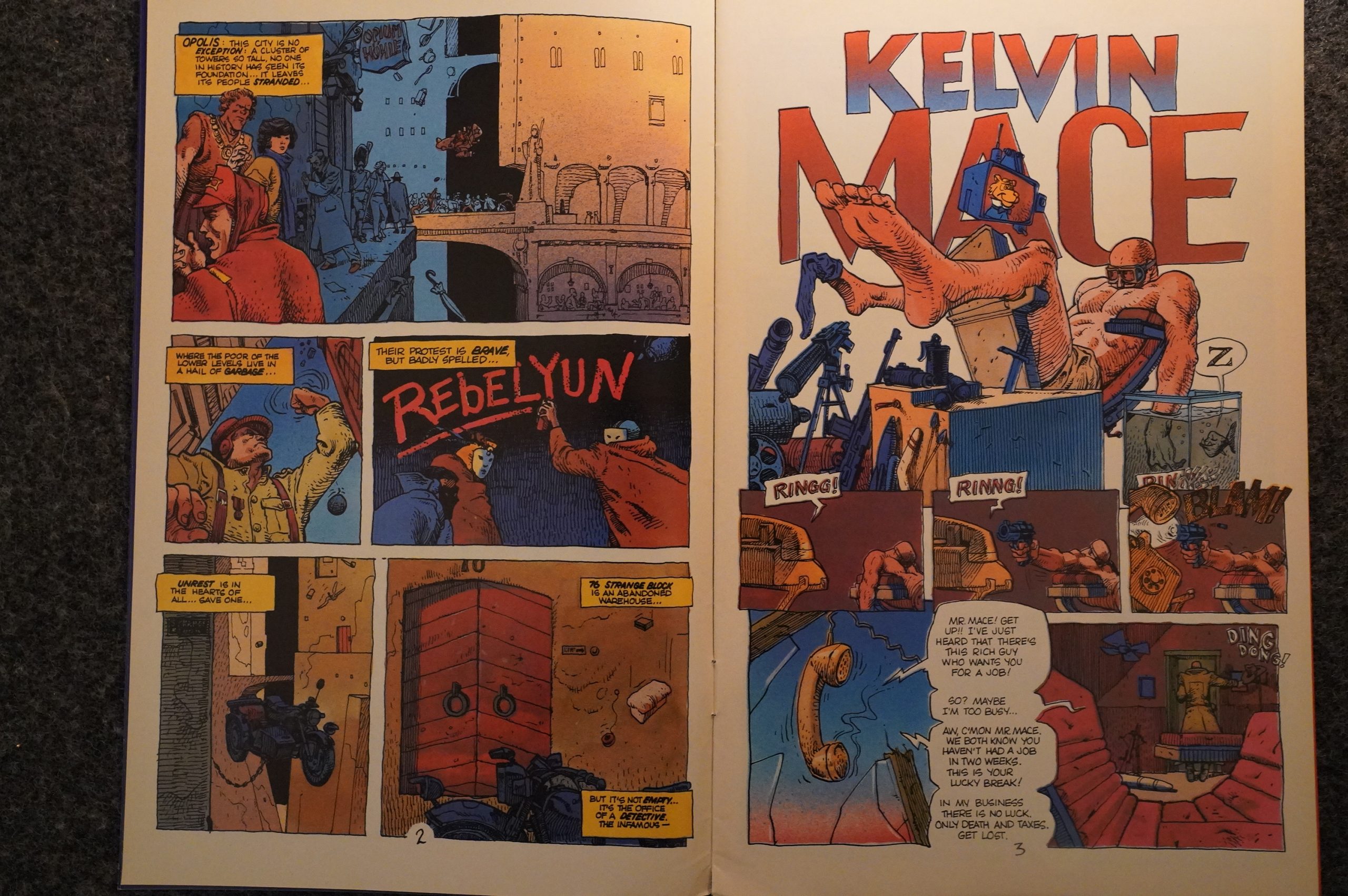 This is the most perfect Moebius pastiche I’ve ever seen, I think. Not the content, but the line work and the character/city design. He explained in the intro that he didn’t find any shops that sold mechanical tone in Europe — I don’t know whether that’s a tongue in cheek explanation for the shift in style or not. 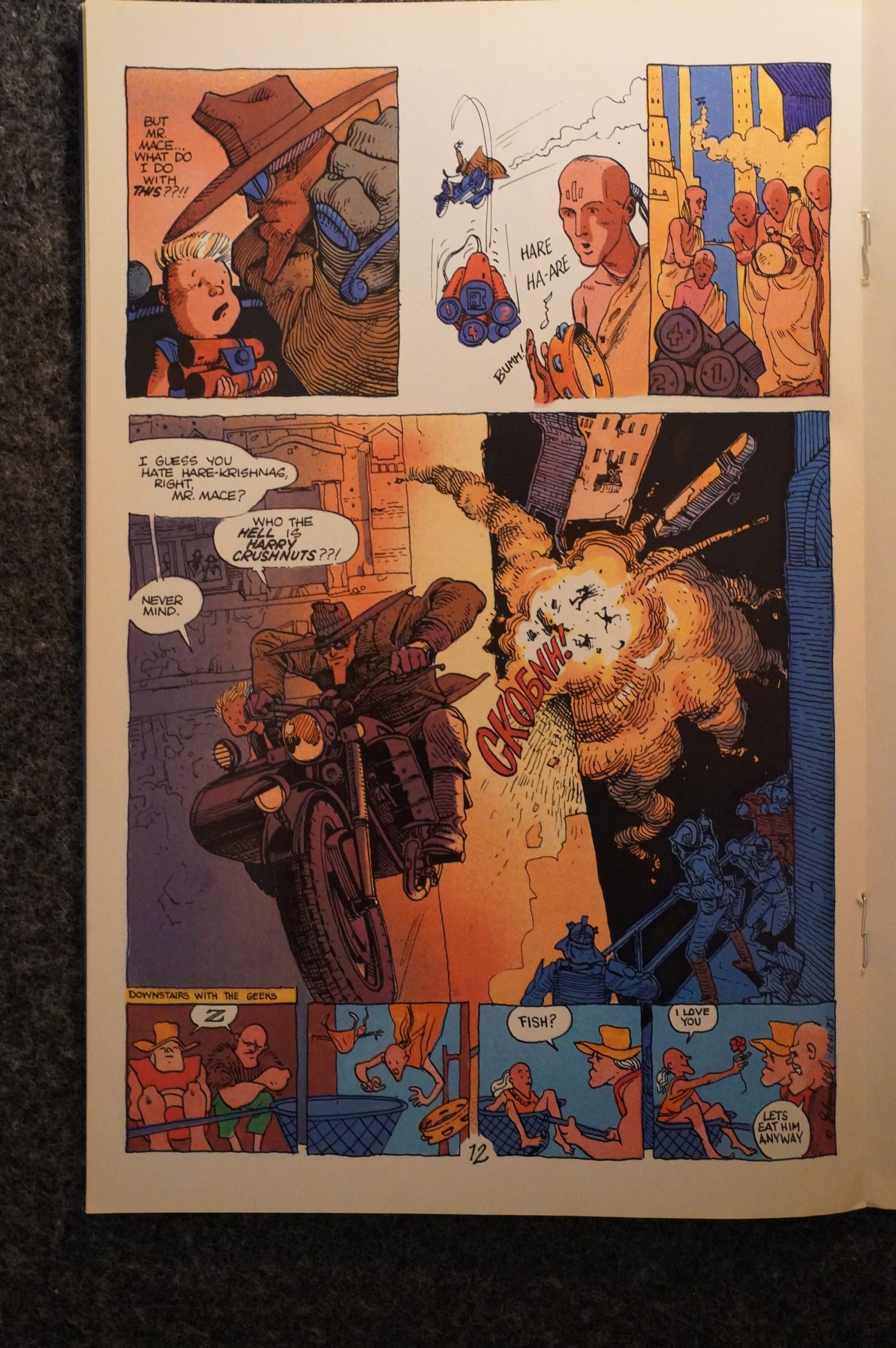 The story in the second issue has no connection what-so-ever with the story in the first issue (which ended on that cliffhanger), and it’s a lot less funny. Templeton crammed thirty jokes into every page, while Schönefeld is more economical. It’s still very funny, and it’s perhaps… a more well-constructed story? The plot is a bit of a cliché, but it’s performed with elan.

And it looks gorgeous. 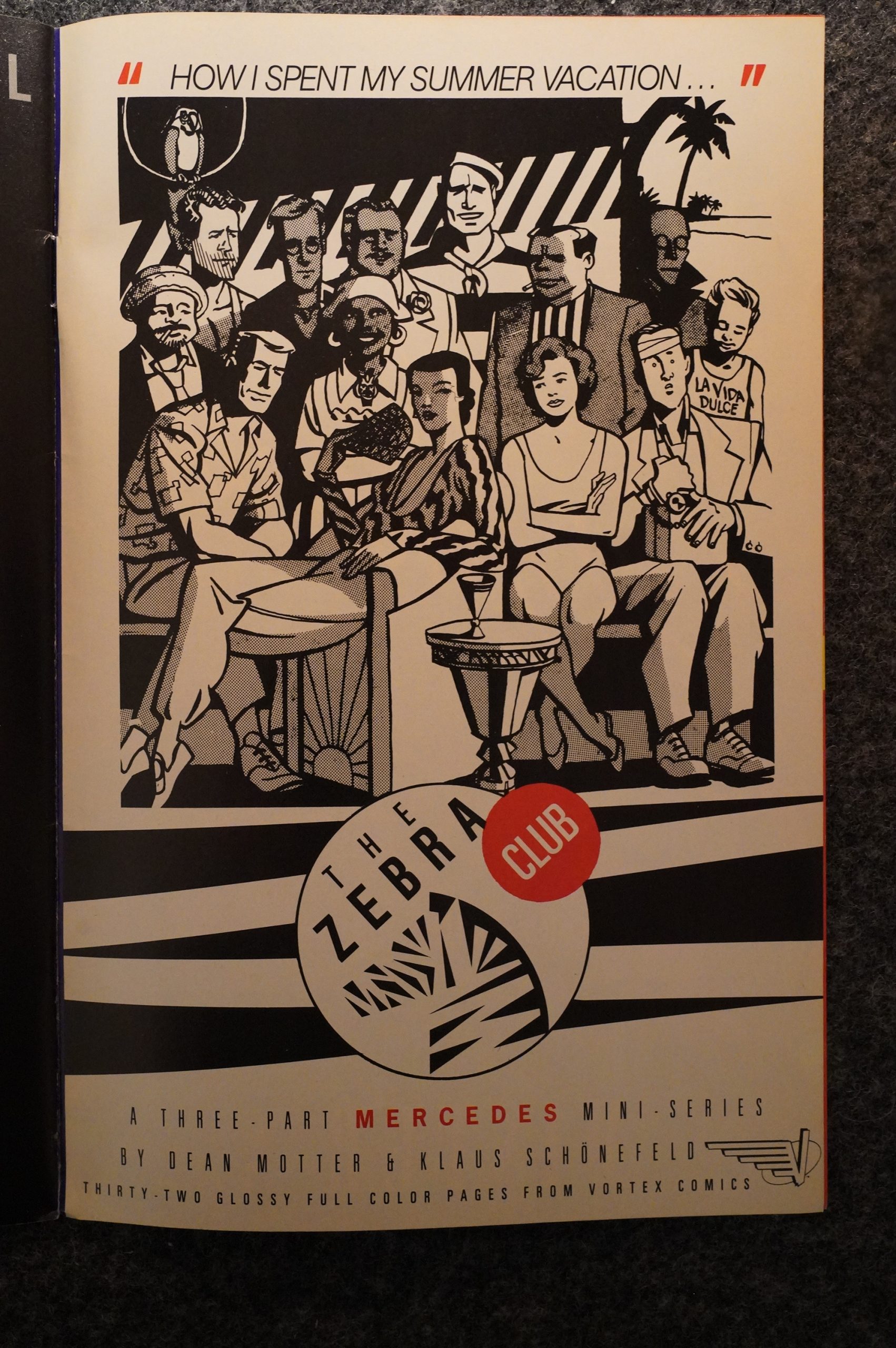 Oh, Schönefeld was supposed to do a Mister X mini-series with Dean Motter (about the Mercedes character)? Again, a very different art style than the first two Kelvin Mace issues.

Klaus Schoenefeld. a young
Canadian artist best known in the
comics field for his work on
Vortex Comics’ Kelvin Mace
(which he created) and Mister X.
died Of a heart attack on May
8th. 1986. The heart attack
occurred as the 24-year-old
Schoenefeld was jogging to the
grocery store.
Schoenefeld. a native Candian
of Austrian origins, made his
living as a commercial storyboard
artist and drew comics on the
side. His collaborator and
roommate Ty Templeton (creator
Of Stigl Inferno). told the Journal
that Schoenefeld’s death came as
a “massive surprise” to everyone
who knew him.
“The real pity.” Templeton
said. “is that Of his really
good comics work hasn’t been
seen by anyone. If he had been
putting the kind of effort into
comics that he Was into his Story-
boards. I’m sure he would have
been a really big name within a
few years. Now. of course. we’ll
never know.”

The Toronto-based Vortex Comics
is sponsoring the Klaus
Schoenefeld Memorial Scholar-
ship at the Ontario College of
Art. Klaus Schoenefeld, who died
of a heart attack in May, was
artist and co-creator with Ty
Templeton Of Kelvin Mace,
producing two issues for Vortex
before his death.

According to Bill Marks, pub-
lisher of vortex, all profits from
the Sales of the reprints of the
first t’.vo issues will fund the
scholarship. • ‘It (the scholarship)
will be awarded for excellence in
comic artwork,” said Marks.
Although the Ontario College of
Art does not offer a degree in
comics, “it is the largest art
school in Canada,” said Marks.
Both Schoenefeld and Templeton
graduated from the college.
Vortex is currently negotiating
with the Schoenefeld estate for
the right to continue publishing
the series, according to Marks.
“We’re looking for a suitable atist
now,” said Marks. “But if you’ve
seen Kelvin Mace, you know that
we’re looking to fill pretty big
shoes.”
Issue #2 Of Kelvin Mace is
currently available, and issue #1
will be available in November.
Both reprints are bla$ and white
and retail for $1.75.

From the 2011/2012 scholarship results from the OCAD university:

But financed by the Leo Burnett ad giant? So I’m guessing he was working for them when he died?

From a Templeton interview in Amazing Heroes #111, page 24:

So we were going to do Stig’s In-
ferno for the college paper. We sat
around and did ideas and sketches
and doodles for weeks and weeks
and, because we were essentially
lazy bastards, we never actually
finished it until Klaus got this job
doing the storyboards for this art
studio and making unbelievable
amounts of money. (In the interim,
by the way, I quit college.) And that’s
when Bill Marks and I got together
and he said “Do you want to do your
mvn strip?” and I went “Yeah! I want
to do Stig’s Inferno.” Klaus didn’t
have time so that’s why I did it by
myself—although if he were around
to tell you he’d tell you a different
story.
So I did it by myself which got
him a little mad because he wanted
to do it but he realized he couldn’t.
That’s where Kelvin Mace came
from: we decided to come up with
a series that he could do the draw-
ings for, and since at the time the
Vortex schedule was to put out a
book every time there was a full
moon or an eclipse, we figured we’d
have lots of time to put one together
on the same schedule. Kelvin Mace
was kind of not-like-Stig’s, but just
as much fun. Unfortunately,. only
one issue of it ever came out..
AH: I thought there were two.
TEMPLETON: Well, yeah, there
were, but the second one doesn’t
count in iny mind because Klaus
drew it in Europe as an attempt to
get me angry. He went off to Europe
on vacation and came back with a
full issue of Kelvin Mace that he’d
written by himself and handed it to
Bill to publish; they published it
without mentioning my name on it
anywhere even though I co-owned
the copyright on the character and
he uns supposed to be my character
and I was suprx)sed to write it. Klaus
told me later that he did it entirely
because I’d done the first issue of
Stig’s on my own, so he did it to piss
me off. Sadly, it was the last one he
did, because then he went and had
a heart attack on Queen Street atx»ut
two weeks later.
I don’t know if I should really go
on and on about him. I could go on
and on because I’ve known him so
many years…
AH: Well, it’s not like anyone else
is going toe..
TEMPLETON: Yeah, 1 guess not.
Someone should. In print then:
Klaus was the most talented artist
who ever lived, absolutely, bar none.
He could draw better than anyone
who ever picked up a pen. It was
stunning. I looked at sketches he did
when he was seven years old and
they’re better than what I do now.
He had this one problem with in-
credible laziness and he was always
very satisfied with what he did. He
never pushed himself to get better,
so he have drawings that were
not as great as, they could be but he
would publish them—and then he
would doodle and the drawings
uould be absolutely magnificent and
no one would ever see them. There
is a huge stack of drawings sitting
at his dad’s house right now that his
parents uouldn’t let anyone look
through, which is really sad. I tried
to talk them into letting me publish
a book of his drawings. They’re
actually interested in it now but at
the time they didn’t want to talk
about it, and unfortunately, I don’t
really know if anyone would be
interested in publishing a book like
that. Other than someone who has
taste, someone who’d be interested
in seeing the drawings of an incred-
ible talent. Fantagraphics, mavbeo
AH: It’s a possibility…
TEMPLETON: Is it, seriously?
Because I love to edit together
a book full of his drawings. Actu-
ally, you’re going to see some of
them anyway because you asked me
to put together stuff from when Stig
was being invented and I pulled out
some of the sketches he did. Since
he was originally supposed to draw
it most of the character sketches
were his and you’ll see the way he
drew. I mean, the stuff he put out
in Kelvin Mace, compared to what
he could do, was just dreck. The
second one actually is closer to what
he was able to do, but that’s the one
where he traced Moebius drawings
all the time.
It really is a bit ofa drag, because
not only was he a magnificent art-
ist. he was also an incredibly intel-
ligent person and a terrific singer
and all that crape We were roomies
for about four years; I miss him
dreadfully. In 1986, somebody de-
sided they were going to mess with
my life: Klaus died on my birthday,
the day my fiancee moved out of the
house: BOOM! “Welcome to reali-
ty, Ty!” BOOM! This also put a
damper on me drawing Stig ‘s Infer-
no, which is probably why the first
[newl issue is not as funny as I want
it to be. I think it could be funnier.
It was the first time I’d ever drawn
a Stig’s Inferno that I knew Klaus
wasn’t going to see, which was really
odd. I mean, even though he and I
didn’t uork on it that much together,
I’d still go over and talk about the
stories and plots with him and he’d
always look at the final issues and
say, “You creep, why are you doing
this by yourself?” But his name went
on every one of them, he was still
part of every issue because he cre-
ated the character. He named him
Stig. I was originally going to call
him Bob.
AH: I assumed it was a pun on
“Styx.”
TEMPLETON: You did? It’s not.
I’m much cleverer than you think–
no, I got that backwards: I’m not as
clever as you think. It’s from Monty
Python.

I looked for reviews of Kelvin Mace on the interwebs, but couldn’t find anything.