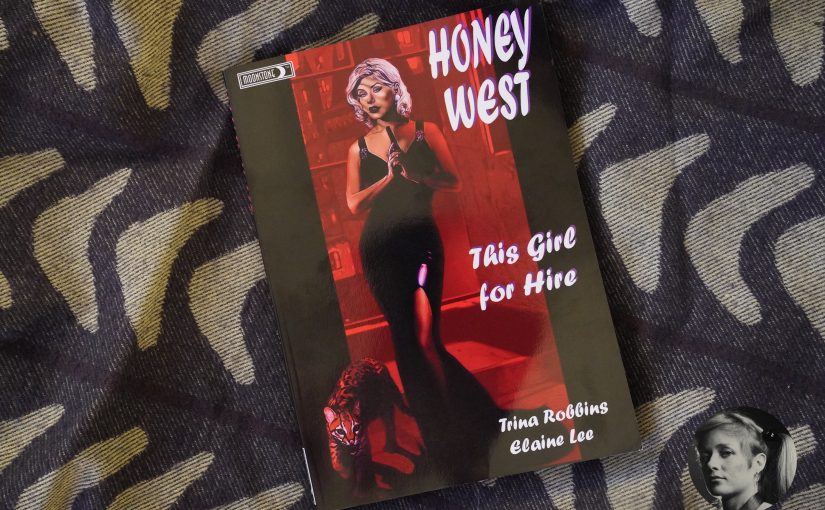 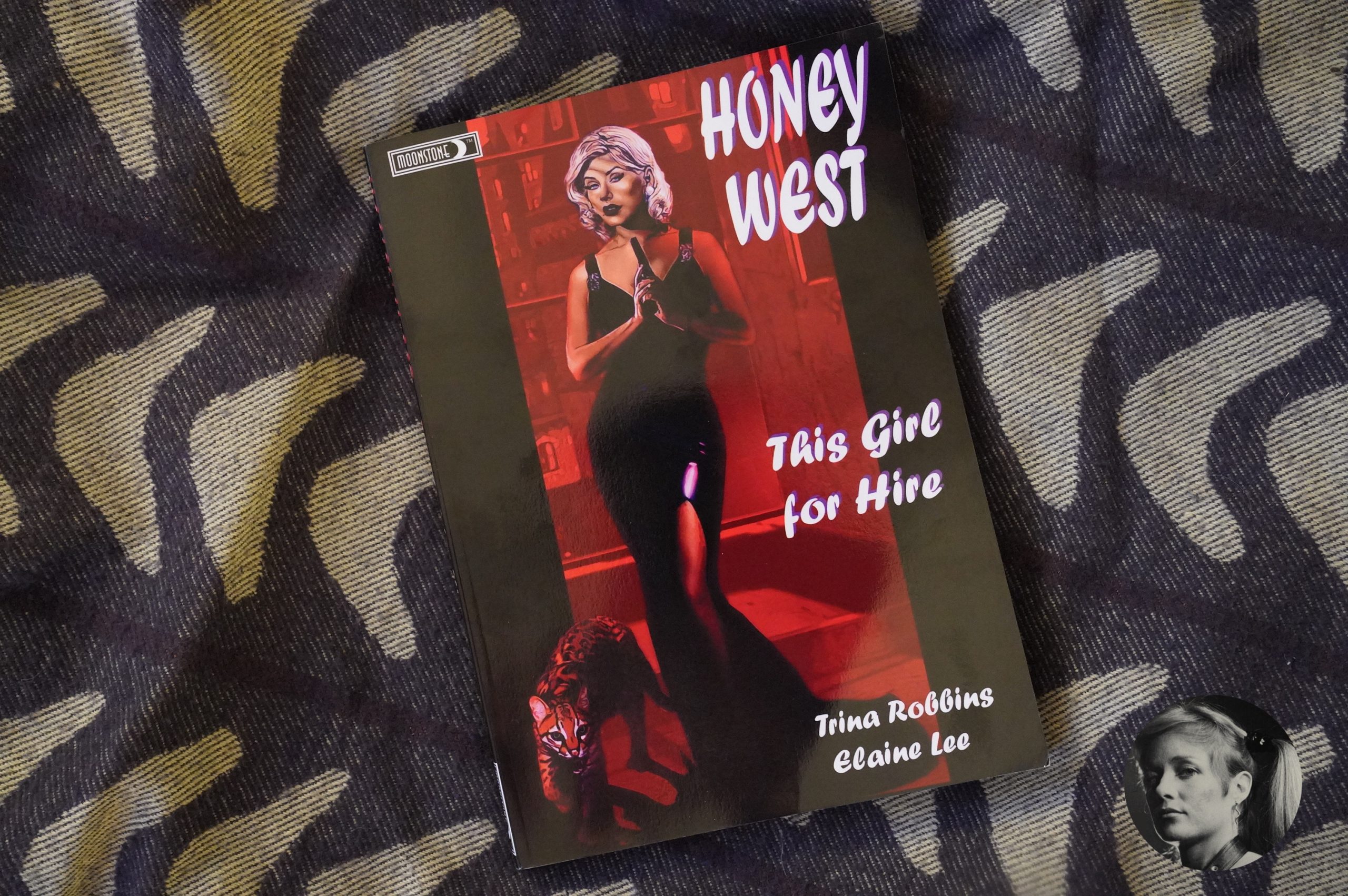 Honey West: This Girl For Hire by Trina Robbins, Elaine Lee and various, published by Moonstone.

Hey! It’s been a month since the previous article in this blog series. That’s mainly because I discovered a couple Lee items while I was doing the main part of the series, so here we are in a mop-up heat. (Is that a word? I normally don’t do sports references.) 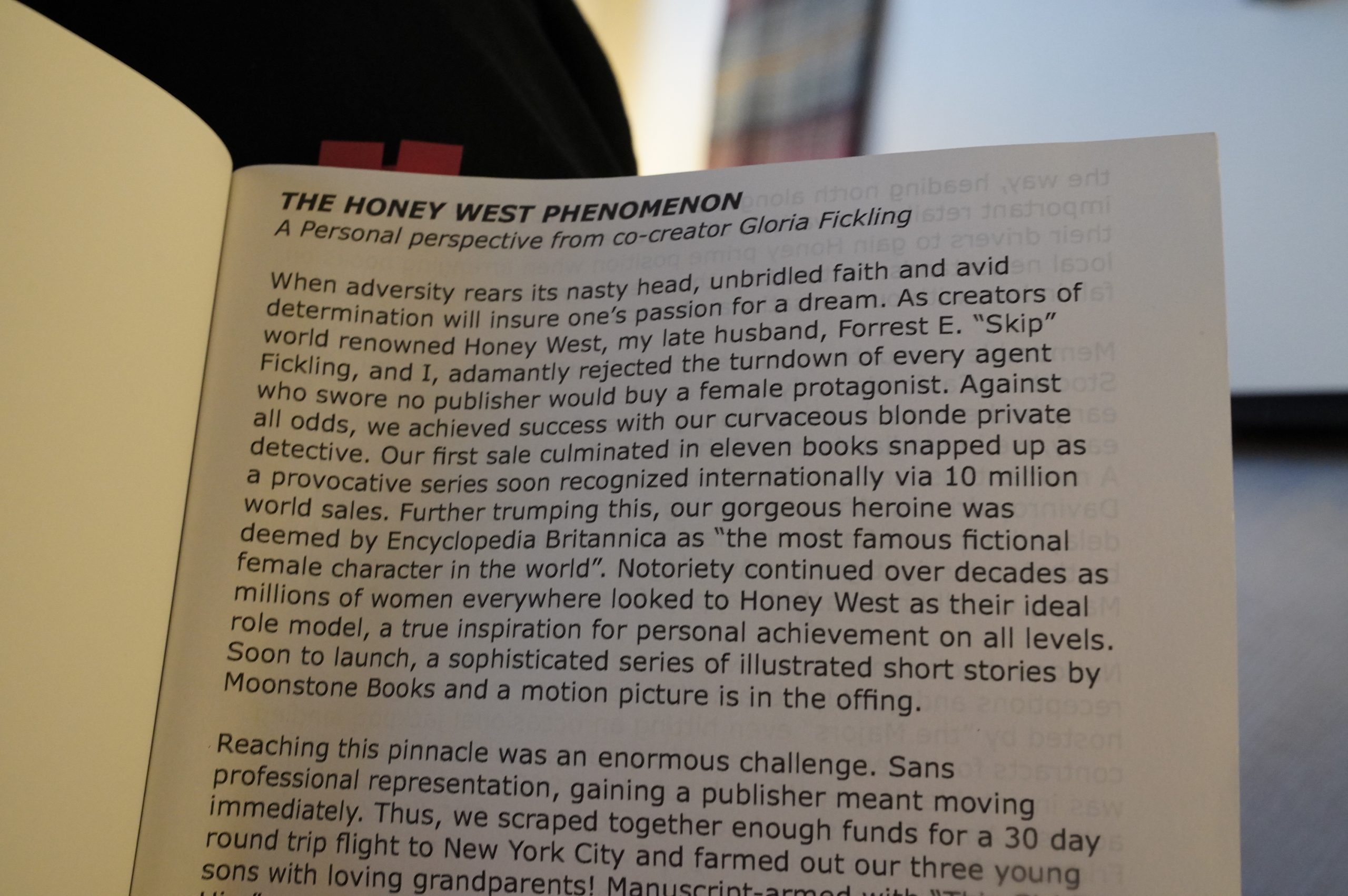 So we start off with a word jumble masquerading as an introduction by Gloria Fickling… Honey West was apparently a… series of novels? Sometime in the past? Fickling isn’t very specific in her er introduction. There’s also a TV series? Probably? In any case, everybody raved about Honey West, even if they had to overcome so many obstacles, somehow. 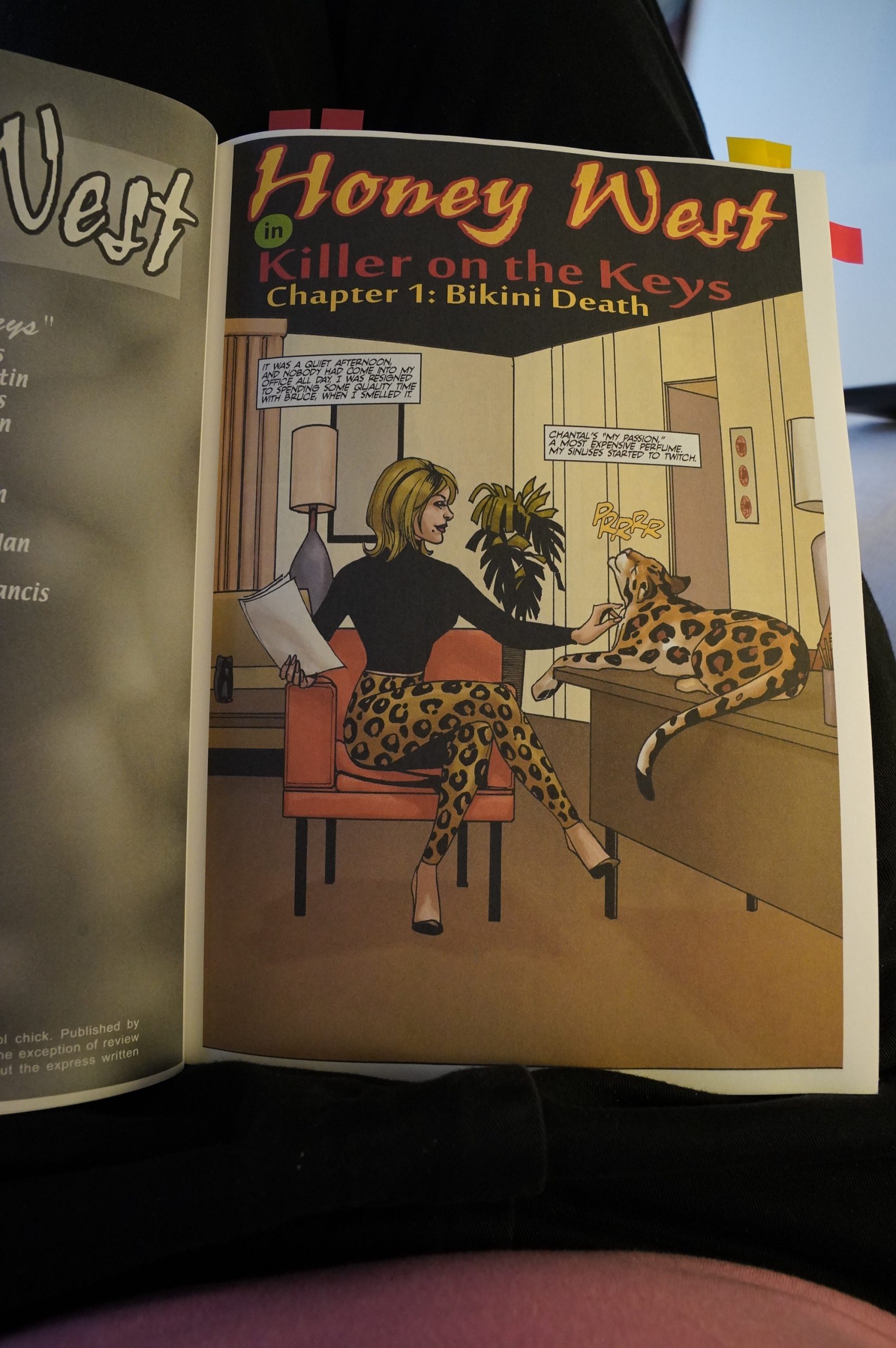 ANYWAY! This is a collection of a series published by Moonstone, and I’m guessing that it was originally printed better than this. This book feels like a print-on-demand thing: It looks like it was printed on a laser printer on ordinary printer paper. It’s just nasty.

But that’s certainly a nice jaguar she’s got on the table there! With matching pants!

The first two issues aren’t written by Lee (instead they’re by Trina Robbins, with artwork by Cynthia Martin). Since this is a blog series about Lee, I should probably just skip those issues, but, hey, it’s Trina. I like Trina. I guess I could just read them without blogging about them, but is that even possible? 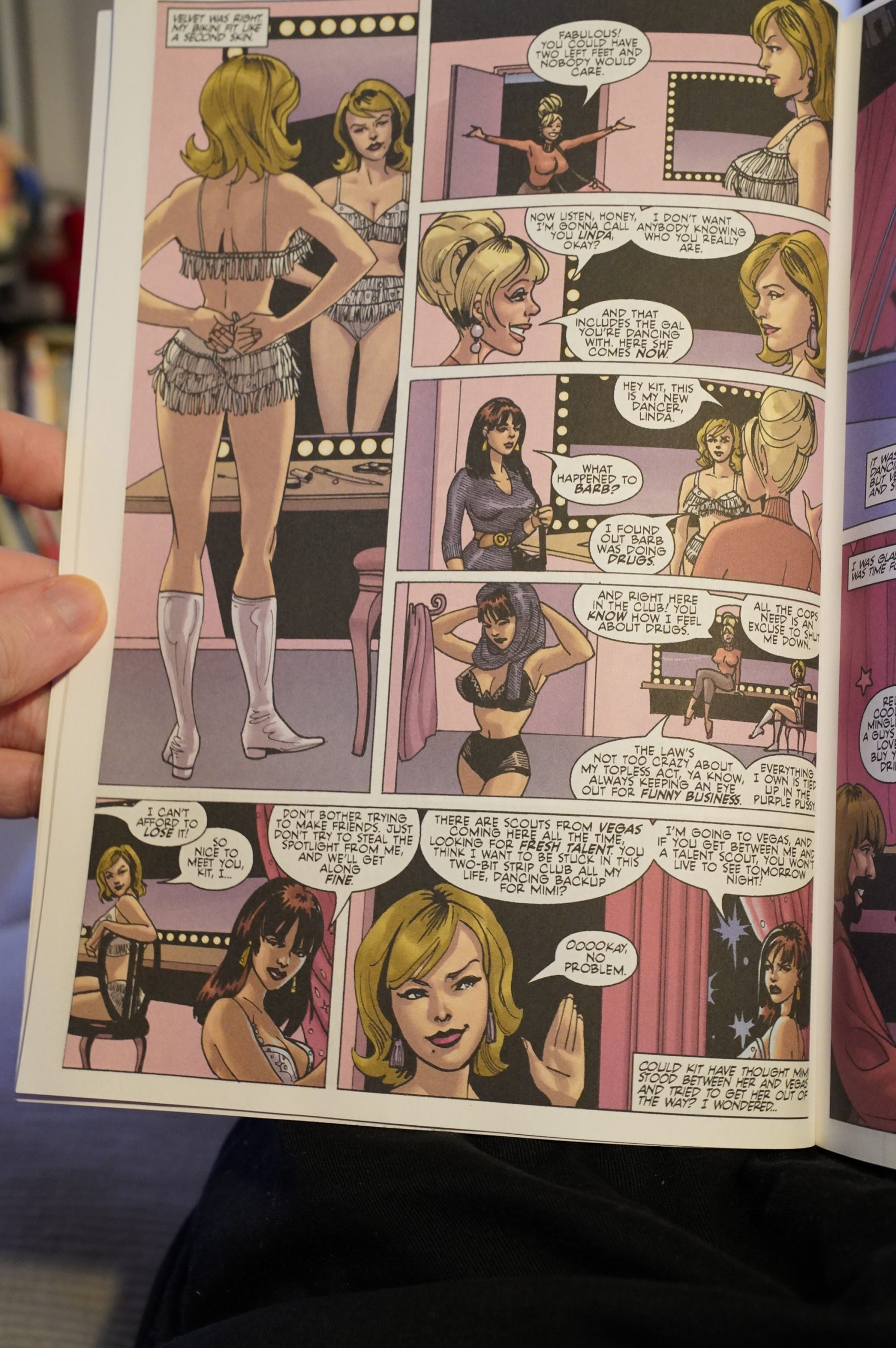 So Honey West is a private eye who goes undercover a lot. Here she’s not so much under cover as not very covered at all as a stripper. 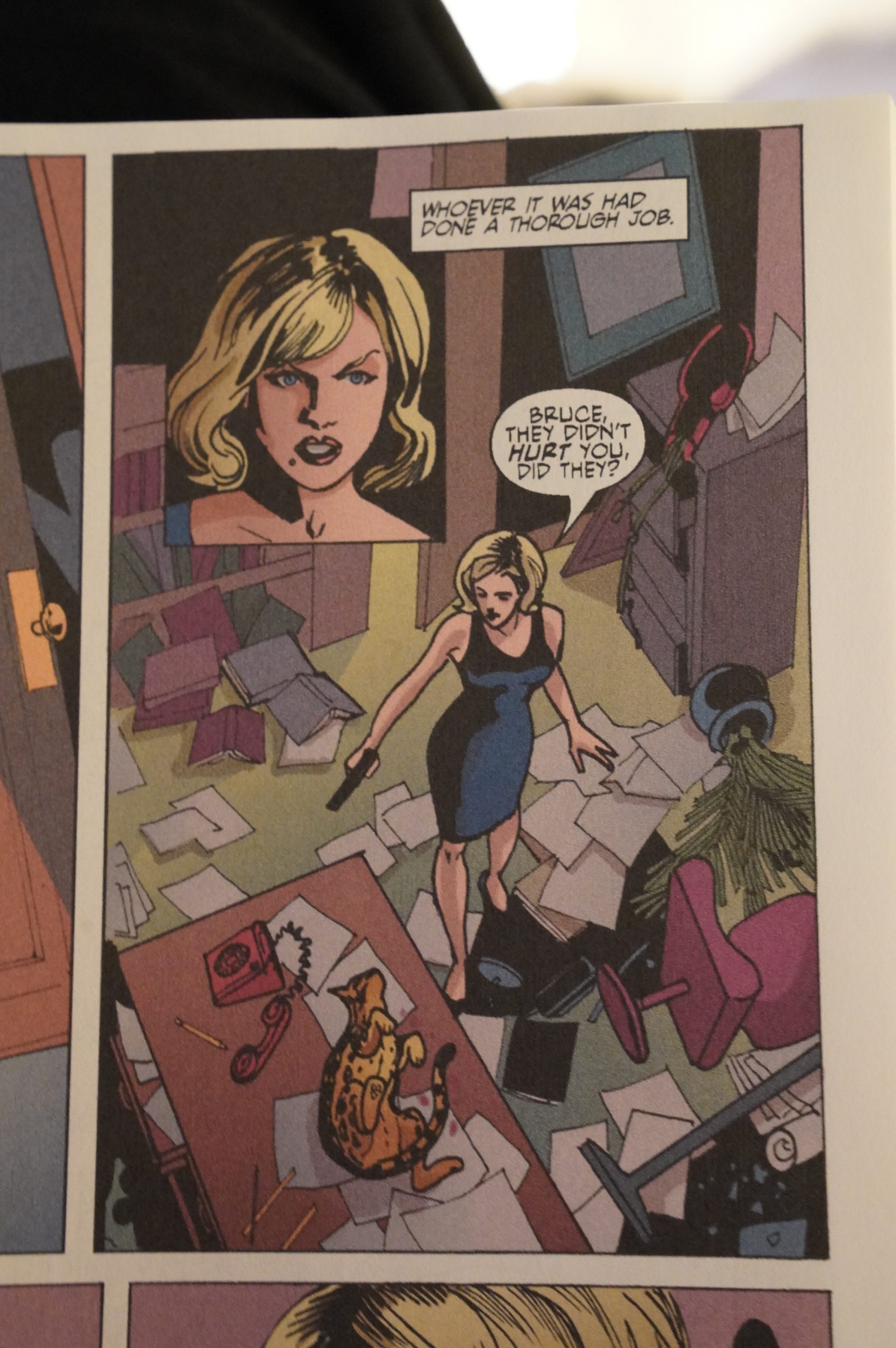 (Spoilers: It changes size a lot. It’s supposed to be an ocelot, which is a largish cat, but the artists can decide an just how big it’s supposed to be. But that is a very nice Cat In Repose drawing, isn’t it?) 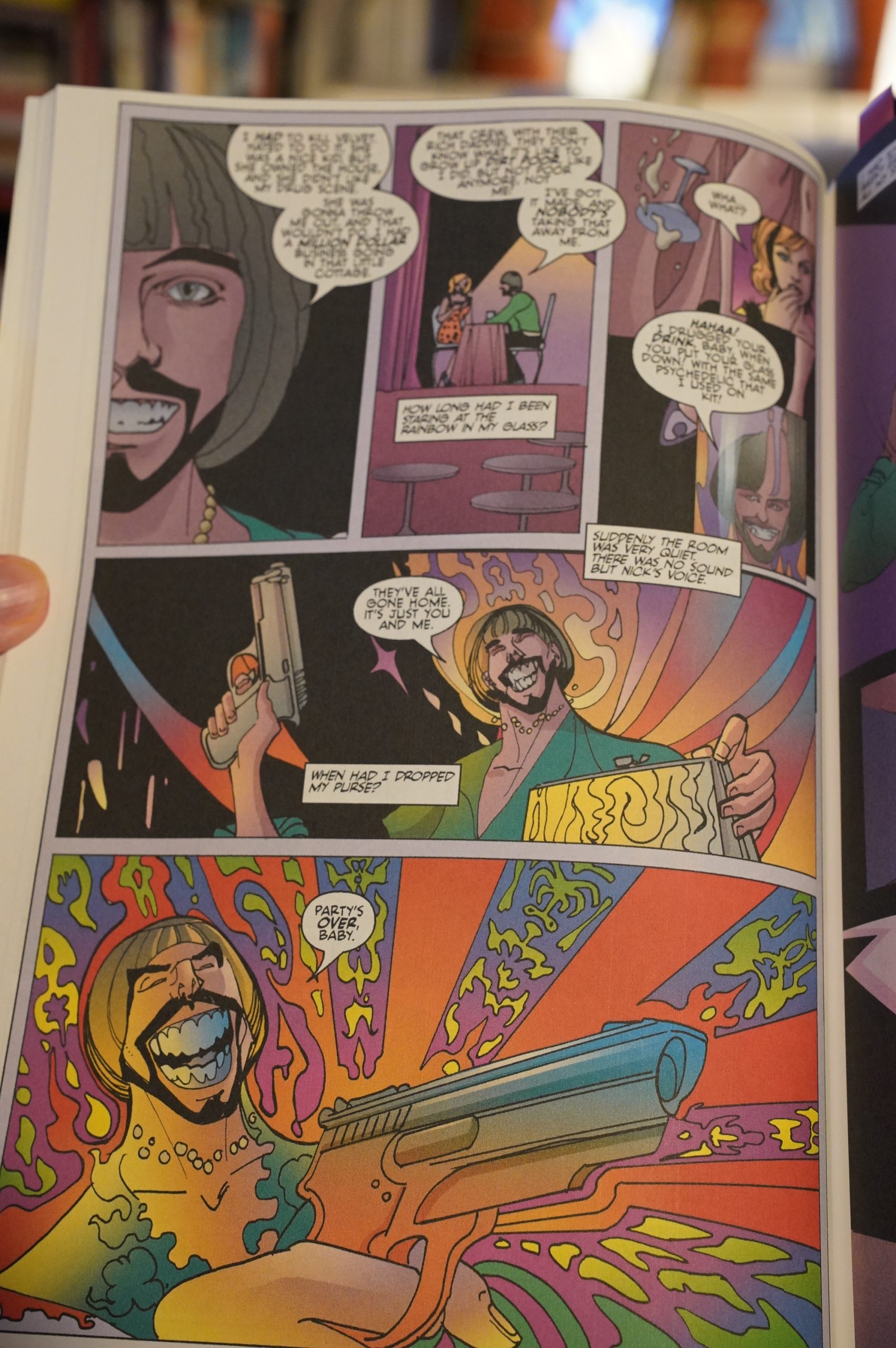 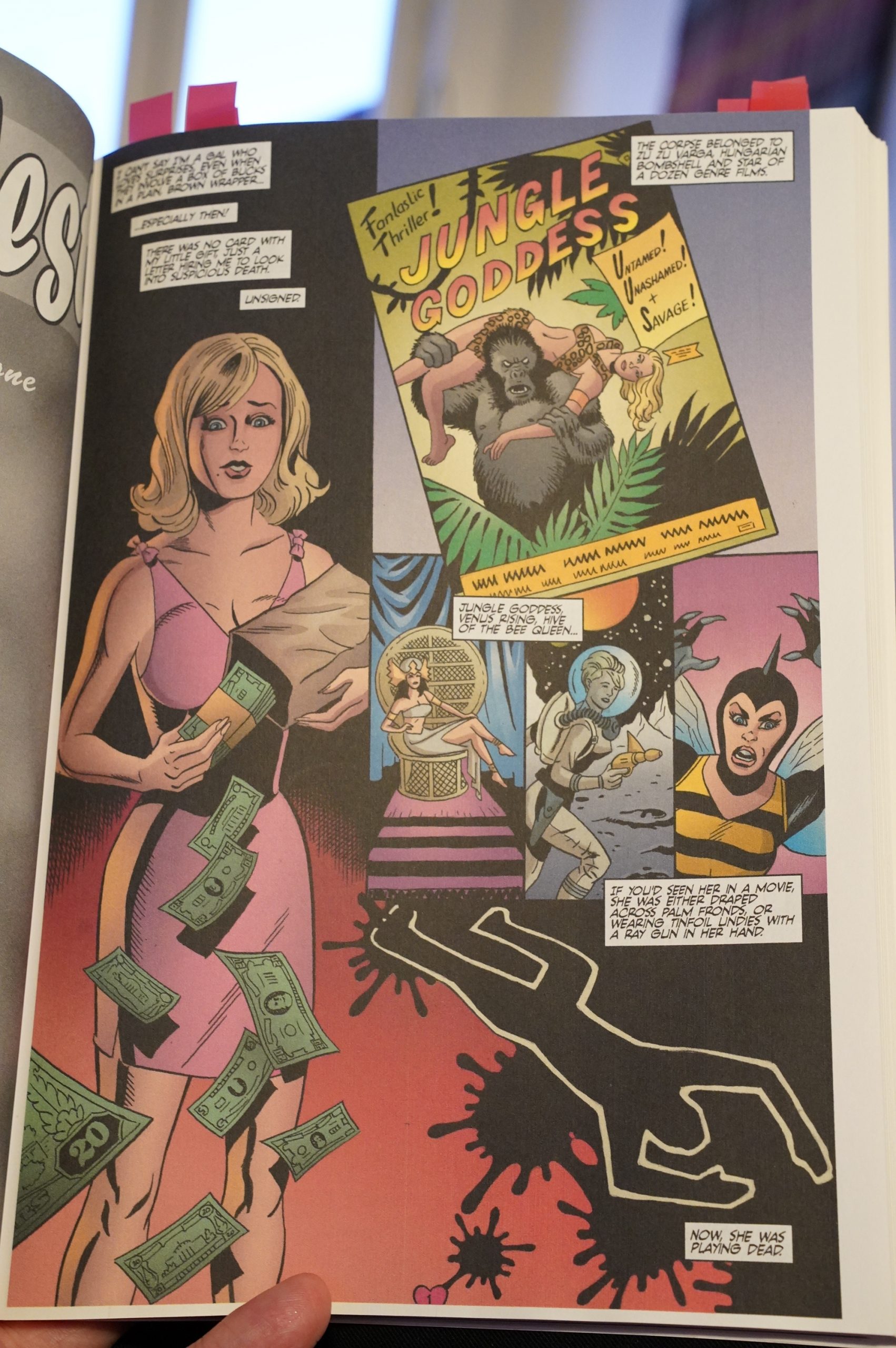 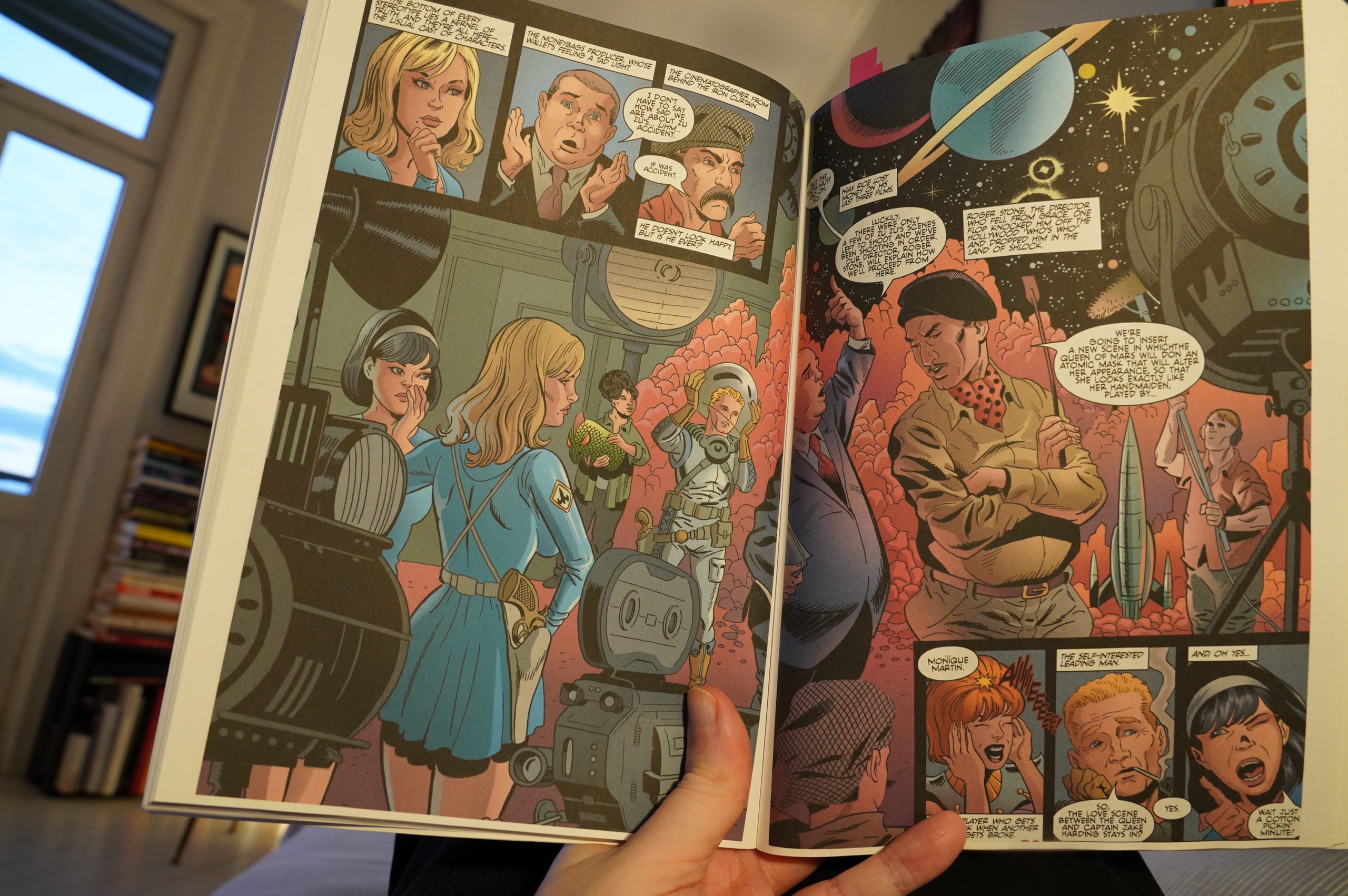 Now, this is more of a real noir outing. It’s more formally inventive than the first two issues — look at the natural way the voiceover I mean the first person captions no I mean the voiceover and the dialogue integrates in that spread up there. It’s a splash page with a lot of information being conveyed, and it’s fun.

The artist is Ronn Sutton, so I guess some of this may be his contribution, but it feels like a very Lee way of storytelling. 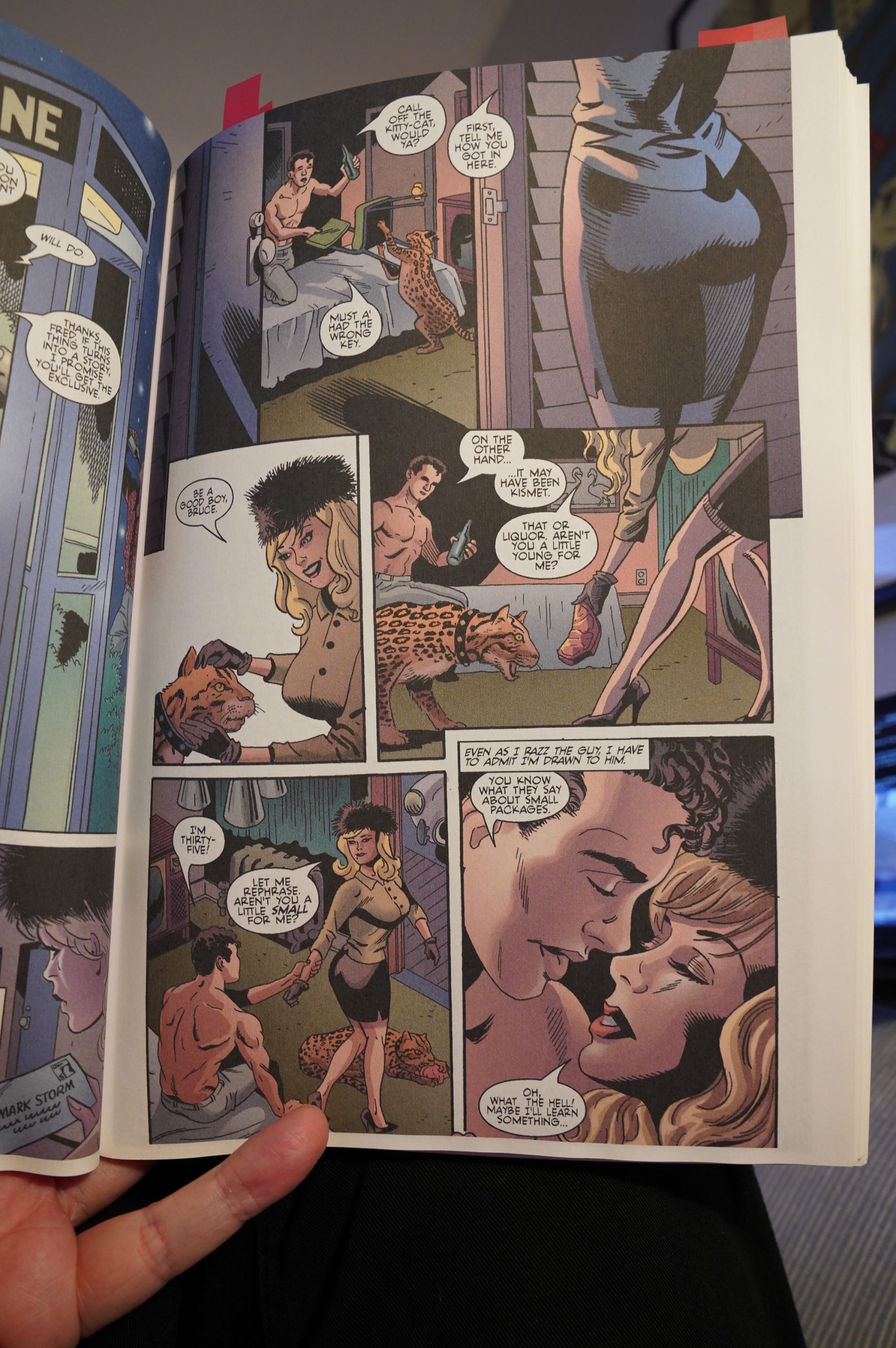 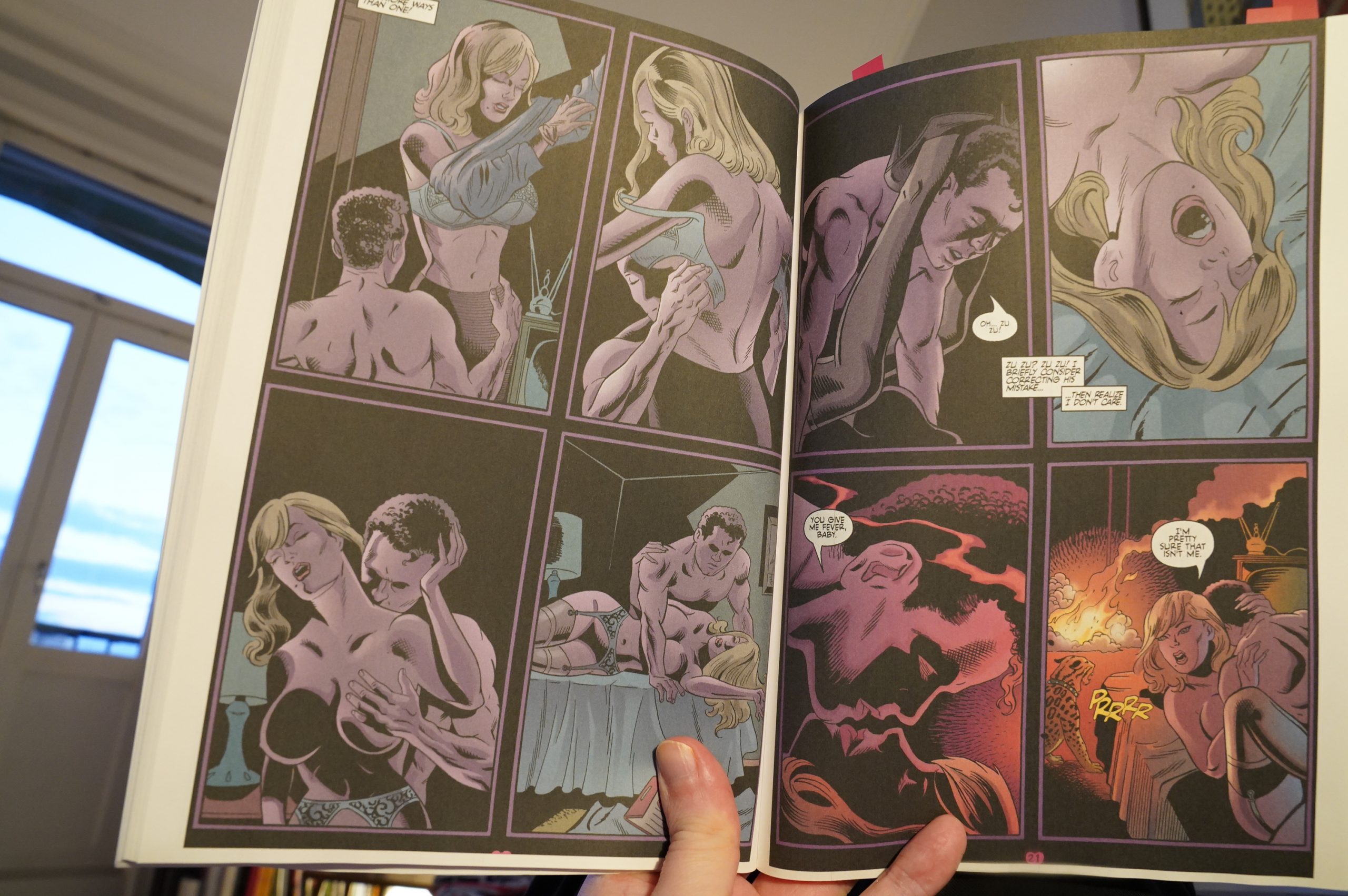 Oh, the printing! It’s so annoying! I’m guessing the pages were supposed to be “full bleed” (i.e., the images extending to the edges of the paper), and it is that at the top (almost), but it’s cut off at the bottom. And the format is a bit wider than the artwork, so there’s borders on the outside… and there’s a white gutter in the middle.

I’m just saying: It’s so slapdash that I wonder what’s even the point of putting out a physical copy looking like this.

Except the millions and millions of dollars, of course. 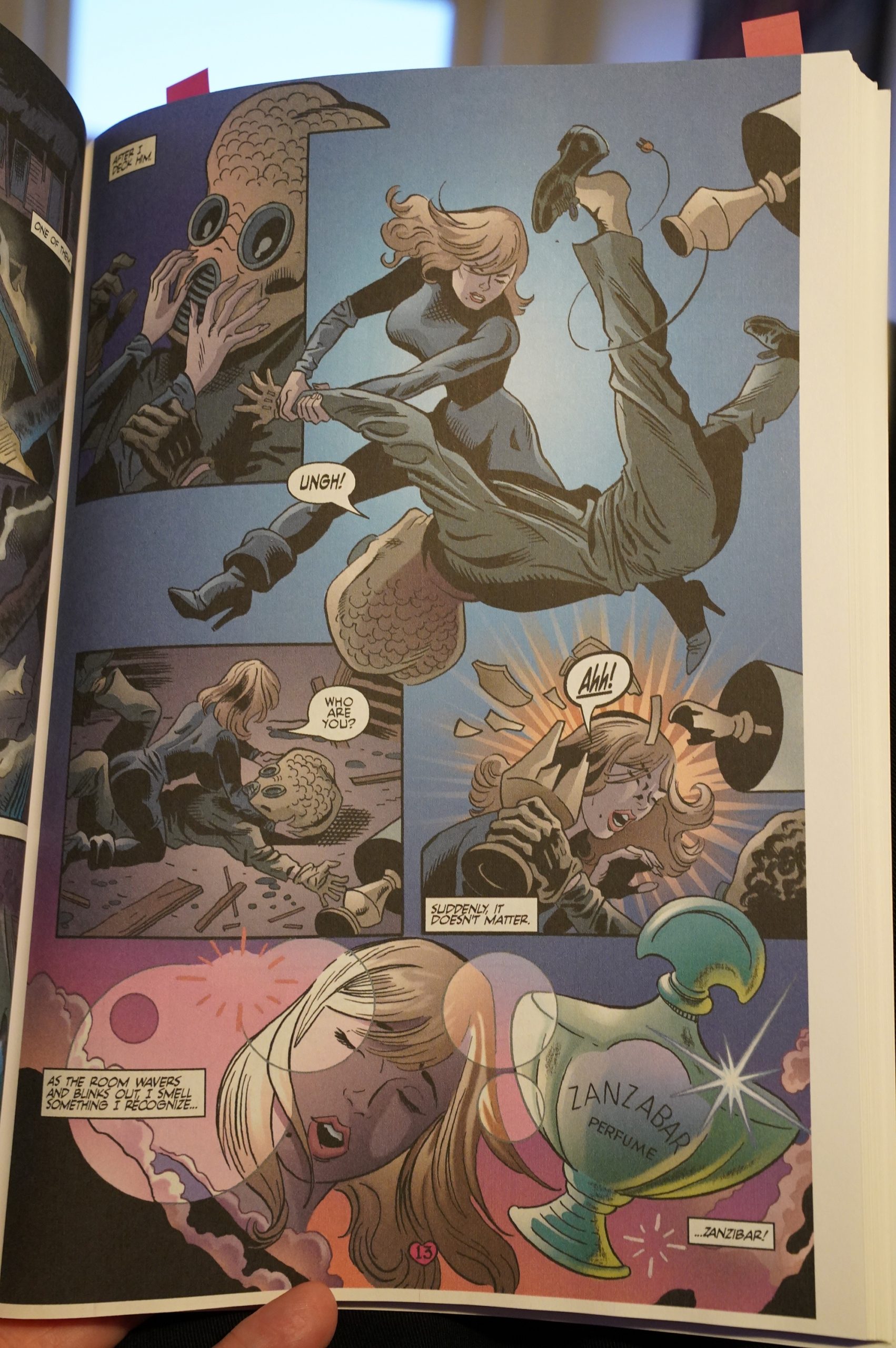 As this is a hard boiled private eye story, Honey West gets knocked out at least once per issue. I guess that’s fair, but the repetition gets a bit… sadistic after a while.

It’s a pretty fun read, altogether, but … I find that I have virtually nothing of interest to say about it. (Yeah yeah, I hear you.)

(Then there’s two Trina issues to round out the collection, and they’re OK, too.) 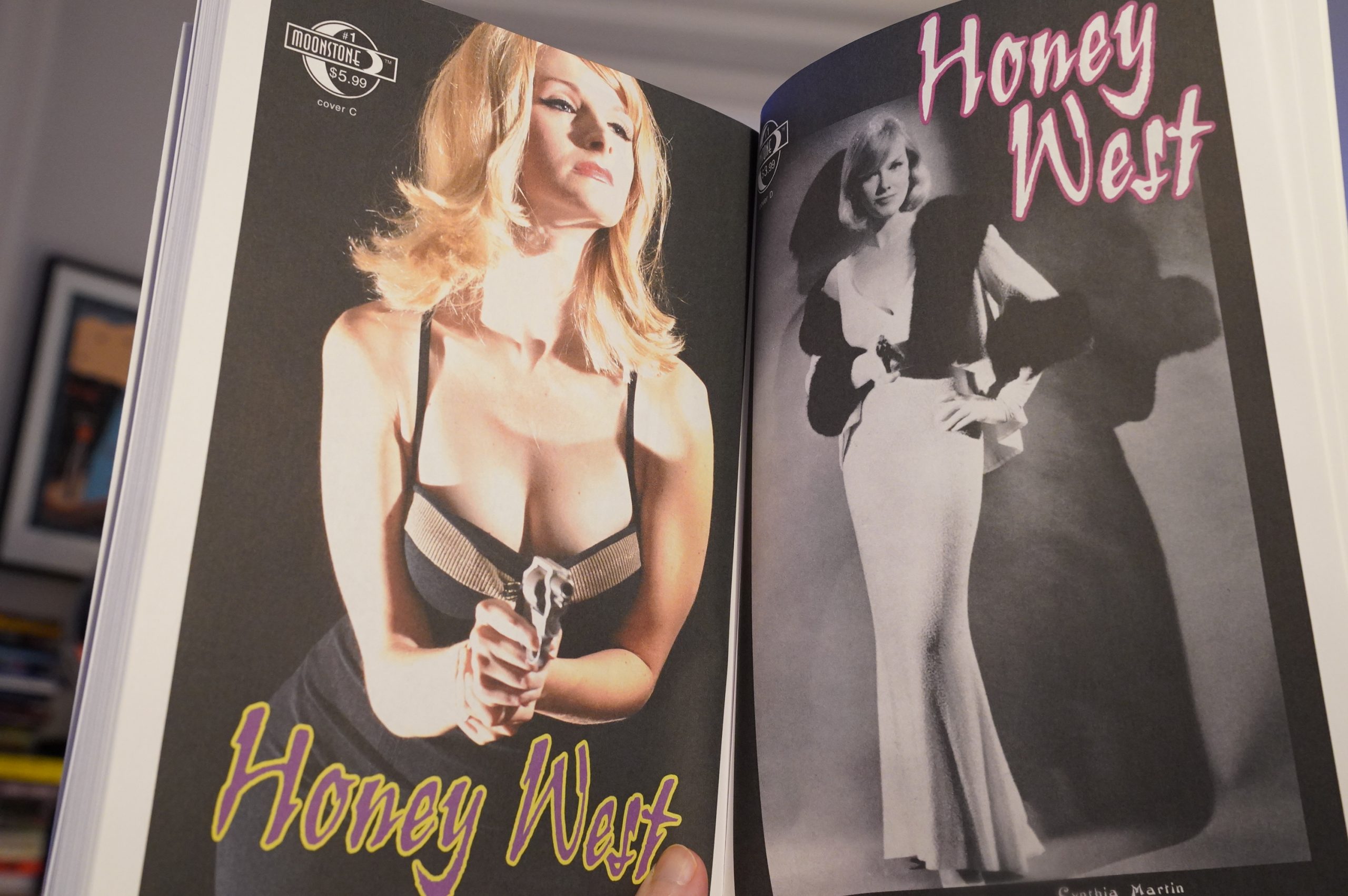 Finally, we get the alternate covers, and they’re totally tasteful. 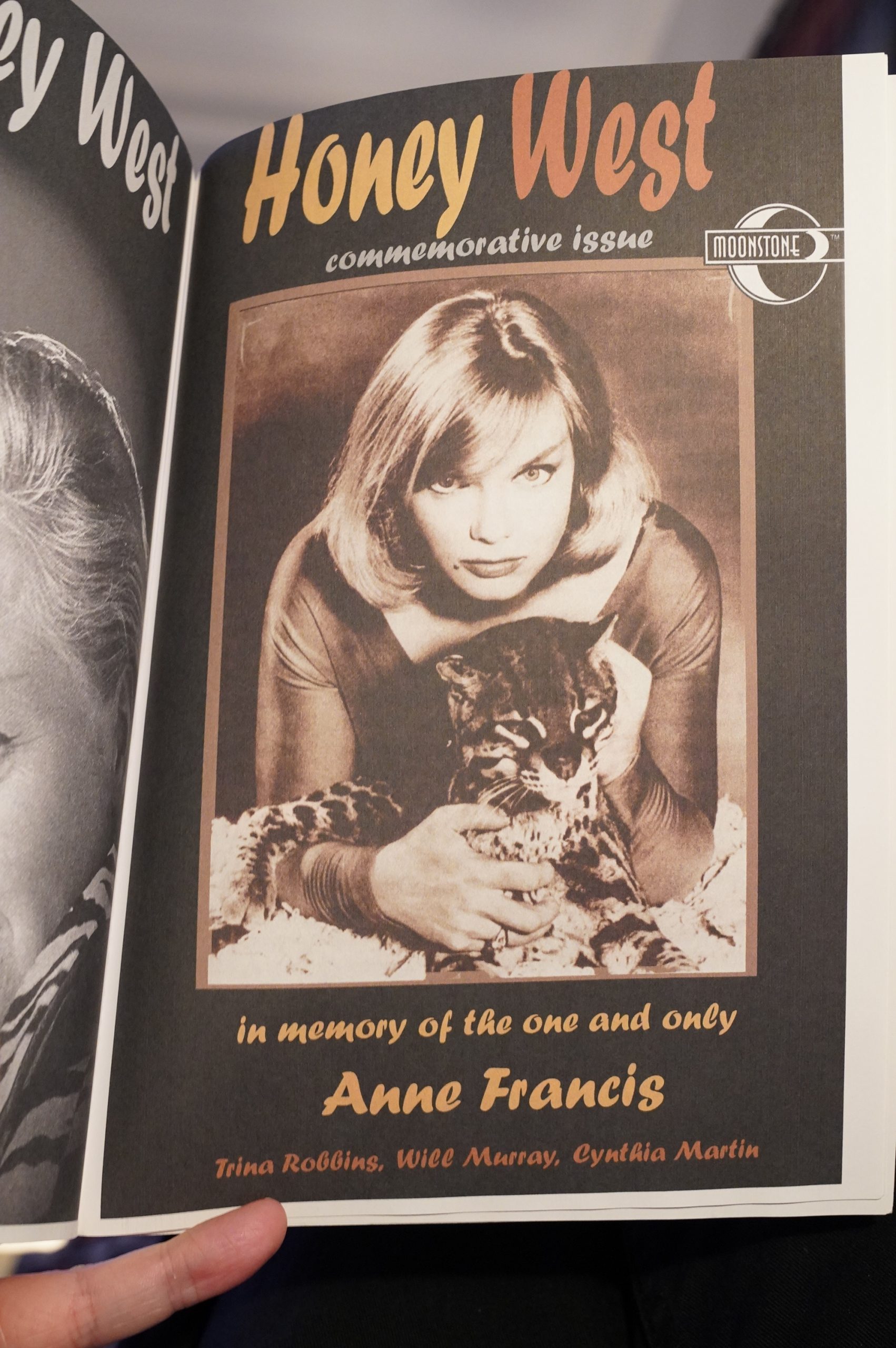 But what does the interwebs think of it?

To my surprise, the last page of the comic stated that Honey West was a television show back in the 60s. In further researching Honey West, it turns out that not only was there a television show, but a novel, first released in 1957. And the very first (and last at the time) Honey West comic book was released in 1966. Now, 44 years later, the second issue (and the one I’m excitedly reviewing) of Honey West has been released, titled: “Killer on the Keys, Part 1: Bikini Death” (August 2010; #1).

I recommend this comic to anyone who wants to laugh, and who wants a break from gratuitous gore, the zombies, or superhero themes. It’s sexy, funny, and delightful!

I think they liked it.

Most importantly, Cynthia Martin knows how to visually narrate a mystery. This makes her ideal for the new adventures of Honey West. VCI Entertainment appears to be offering a ten dollar off coupon on the Honey West DVD set sold at their site. However, at this point in time, VCI does not recognize the coupon.

It’s an entertaining pair of comics; a pair I wished I’d liked more given the pedigree. Oh, it’s all deftly done but a little flat. There are some good lines, a couple of laughs and the cartoonily fluid but precise art of Cynthia Martin keeps it all swinging along in a frothily frictionless manner. Actually, it took me a while to warm to Cynthia Martin’s art but once I realized there the scale of her cat wasn’t off (it was an Ocelot; it’s that kind of book) I relaxed and appreciated the clean surety of her line.

As in Elaine Lee’s debut issue, this Honey West, despite the presence of Bruce, is firmly entrenched in the paperbacks rather than the television series. Ron Sutton and Ken Wolak follow Lee’s lead and fill the panels with inflagrante Honey moments. This isn’t sexist; it’s accurate.

“I’m having a lot of fun working on these issues” Sutton said. “In the original novels Honey West was a much sexier character than she was portrayed on television. So I’m trying to re-instate that. The story takes place in 1965 and I’ve worked hard to visually recreate that era: the hairstyles, clothes, furniture, etc. The mid-60s was also probably the last hurrah for that very girly-girl sex kitten image. That’s what I’m trying to bring to my version of Honey. She’s very alluring, well-built and she’s always on the verge of spilling out of her clothes”.