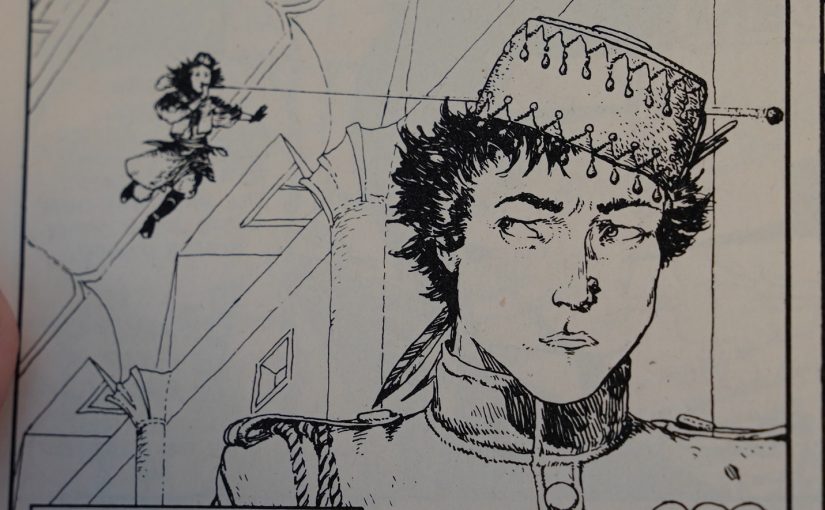 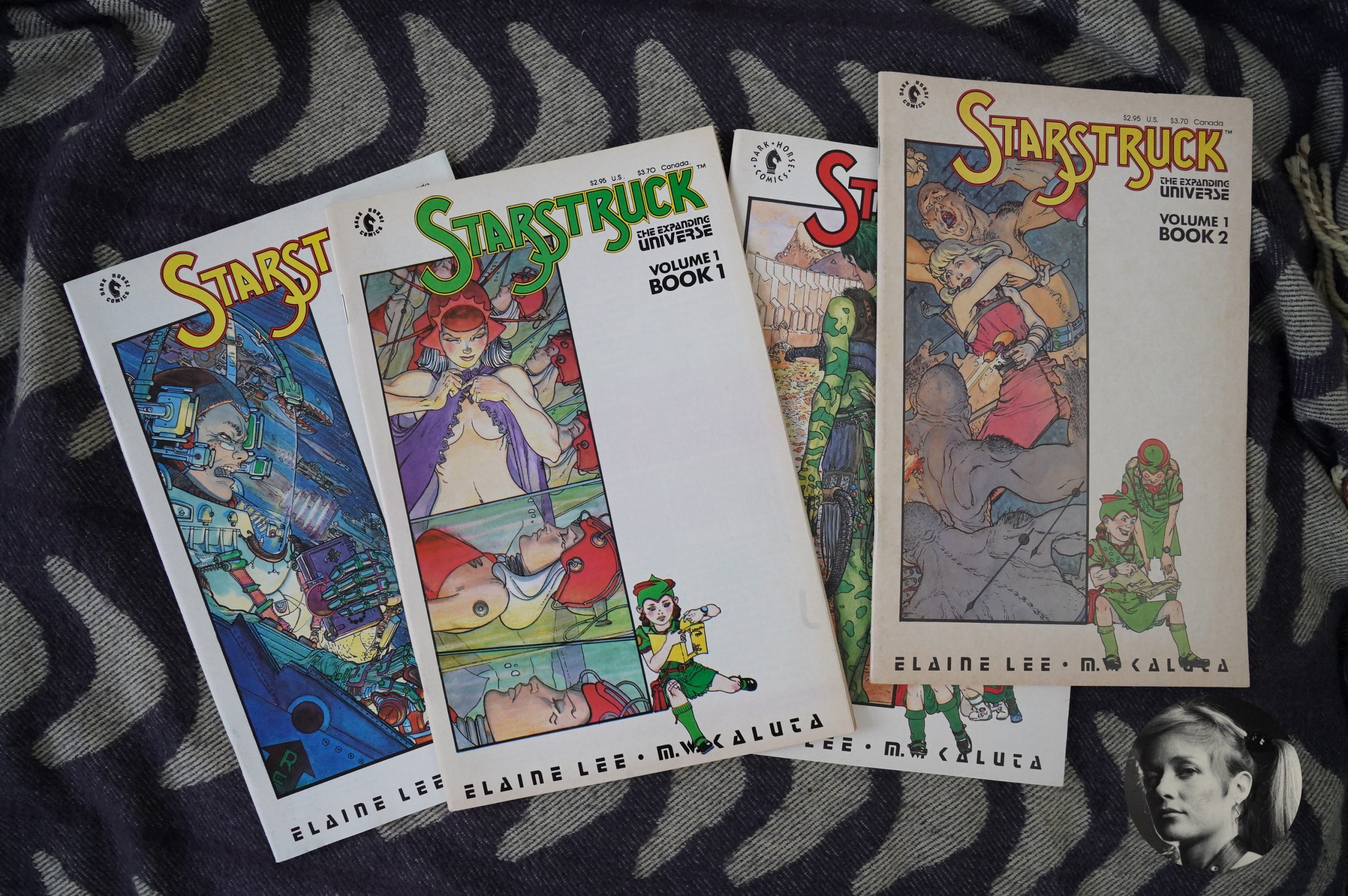 I wasn’t going to do any Starstruck-related stuff in this blog series, but it occurred to me that I had the Dark Horse series, and it might be interesting to read it and compare it to the IDW collected edition.

(Oh, Here’s an explanation of what this blog series is. And I wrote about Starstruck here.) 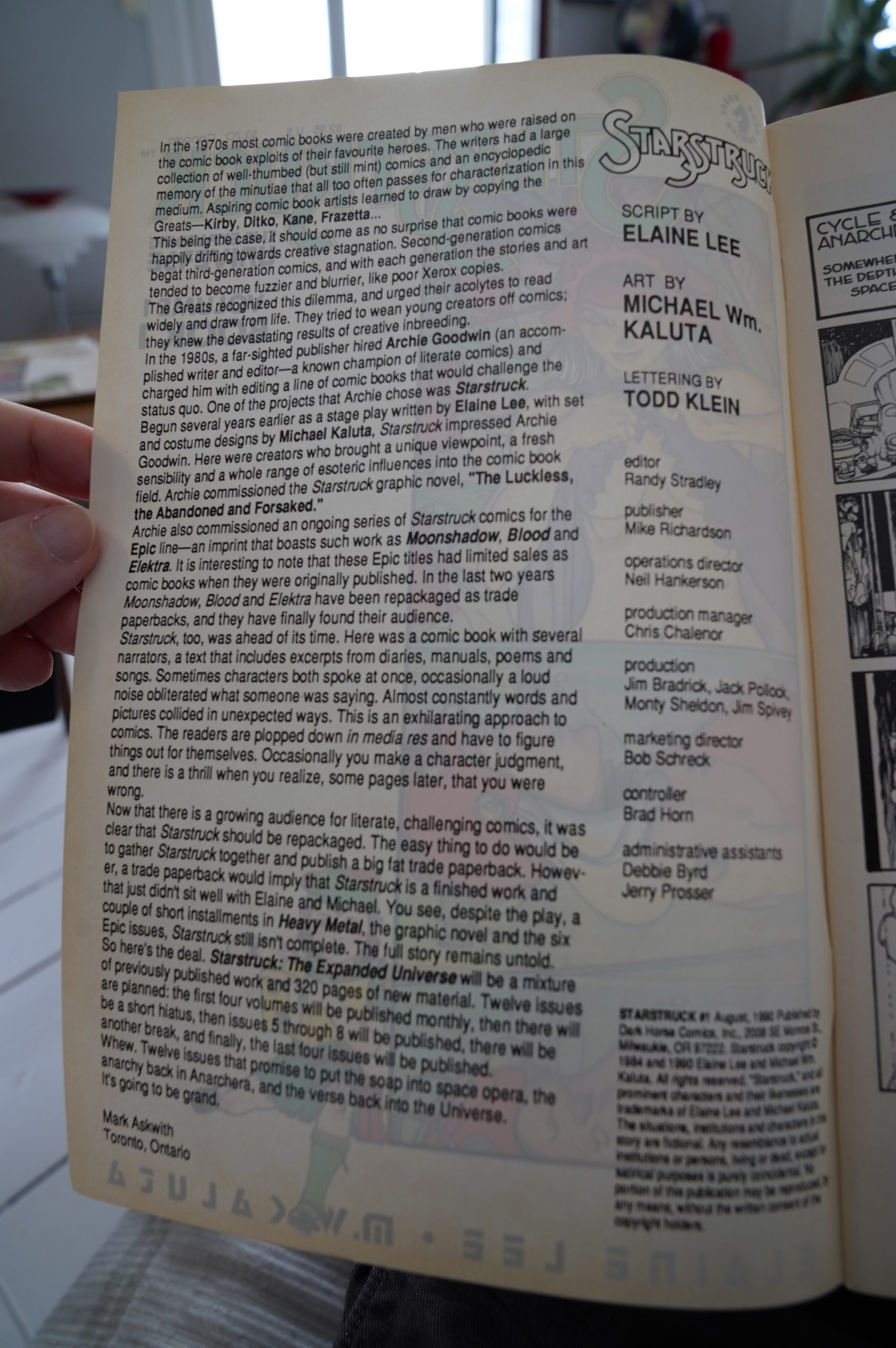 First we get a somewhat revisionist history by Mark Askwith — Archie Goodwin didn’t “commission” the first Starstruck graphic novel so much as reprint it: It first appeared as a serial in Heavy Metal.

But we’re told what this series is: It’s an expanded version of the graphic novel, the Epic series, and then presumably what was supposed to come after the first six issues of the Epic series (which had originally been planned as a 12-issue series). 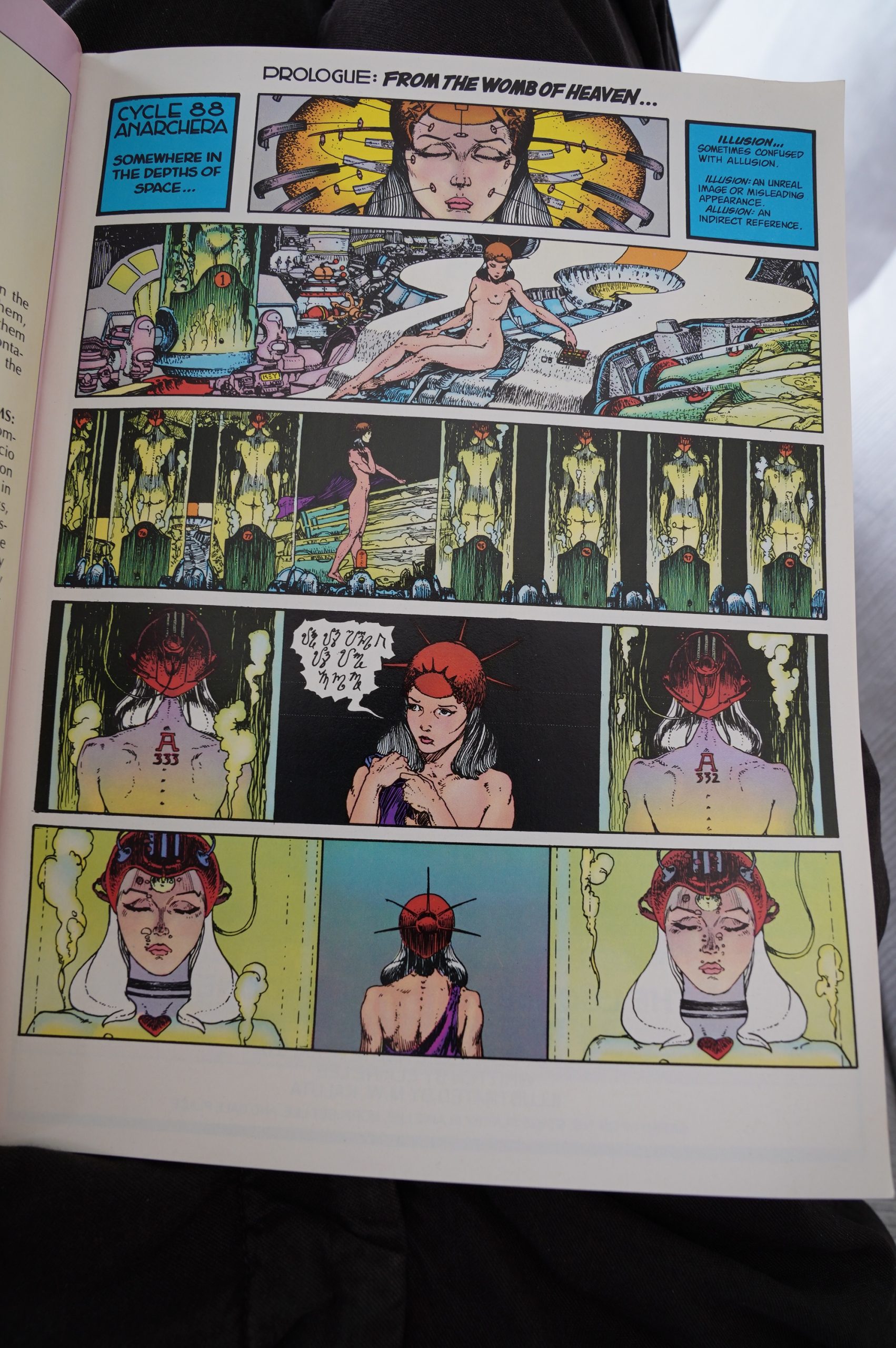 Above is the first page of the graphic novel.. 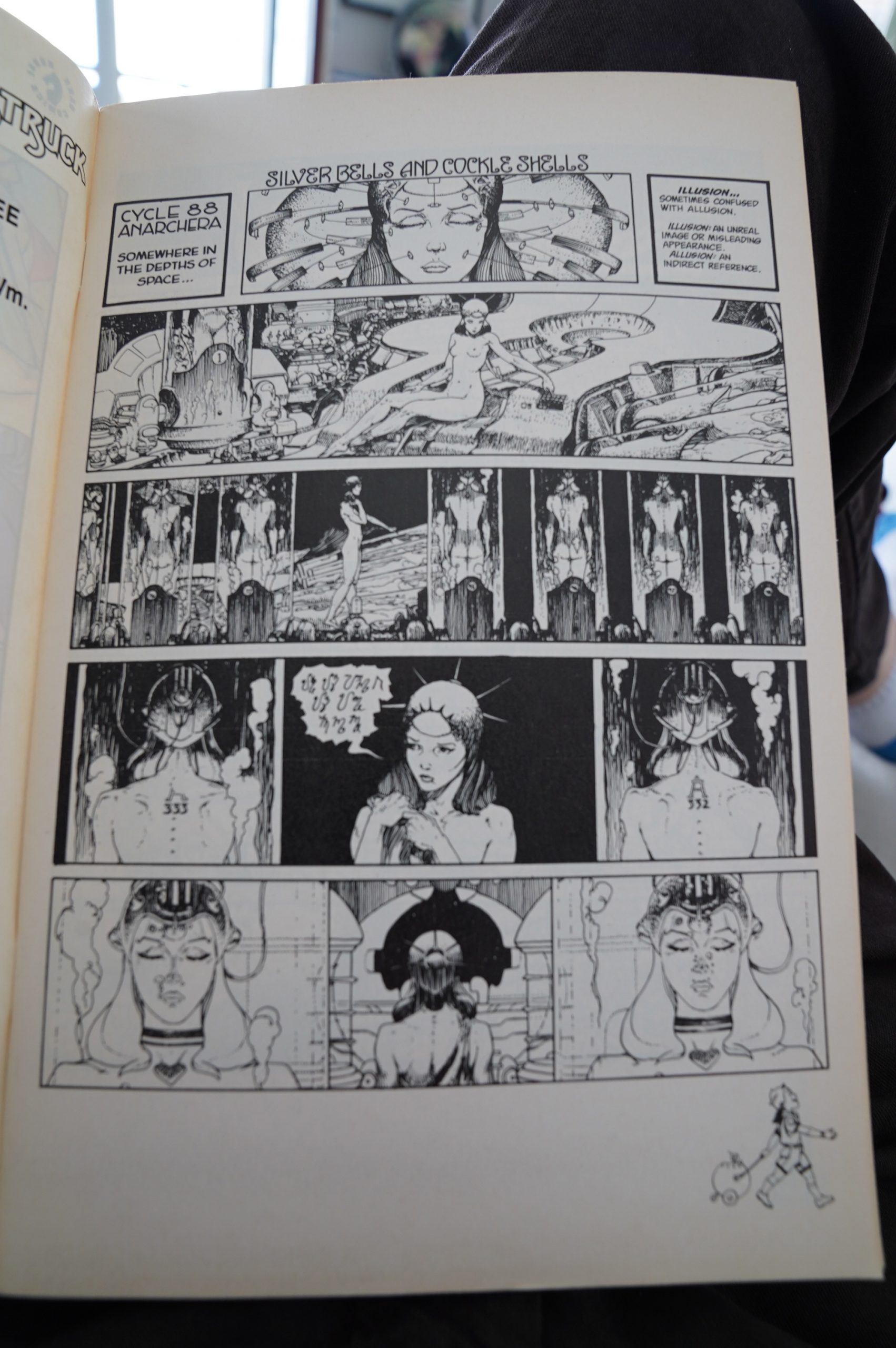 And then the first page of the Expanding Universe series… Famously, the IDW version is in comic book ratio (higher or narrower than the magazine/graphic novel ratio), so Kaluta (with Lee Moyer on colours) had to elongate the artwork on all the pages reprinted from the graphic novel. Here he’s just added an almost-repeat row to the bottom, but they use a large number of techniques, like making panels taller, or adding more space, etc. 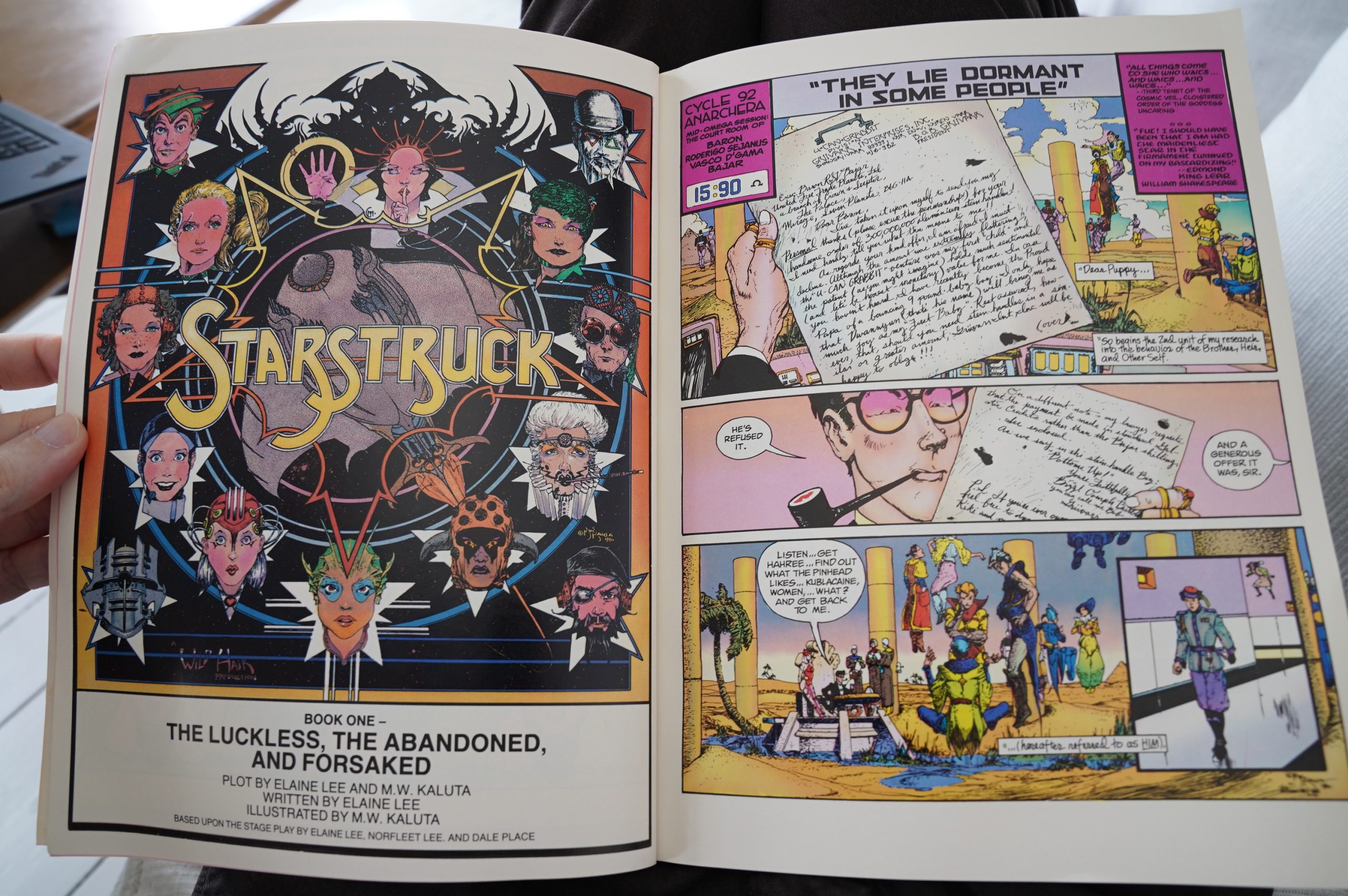 And then these are the next pages from the graphic novel… 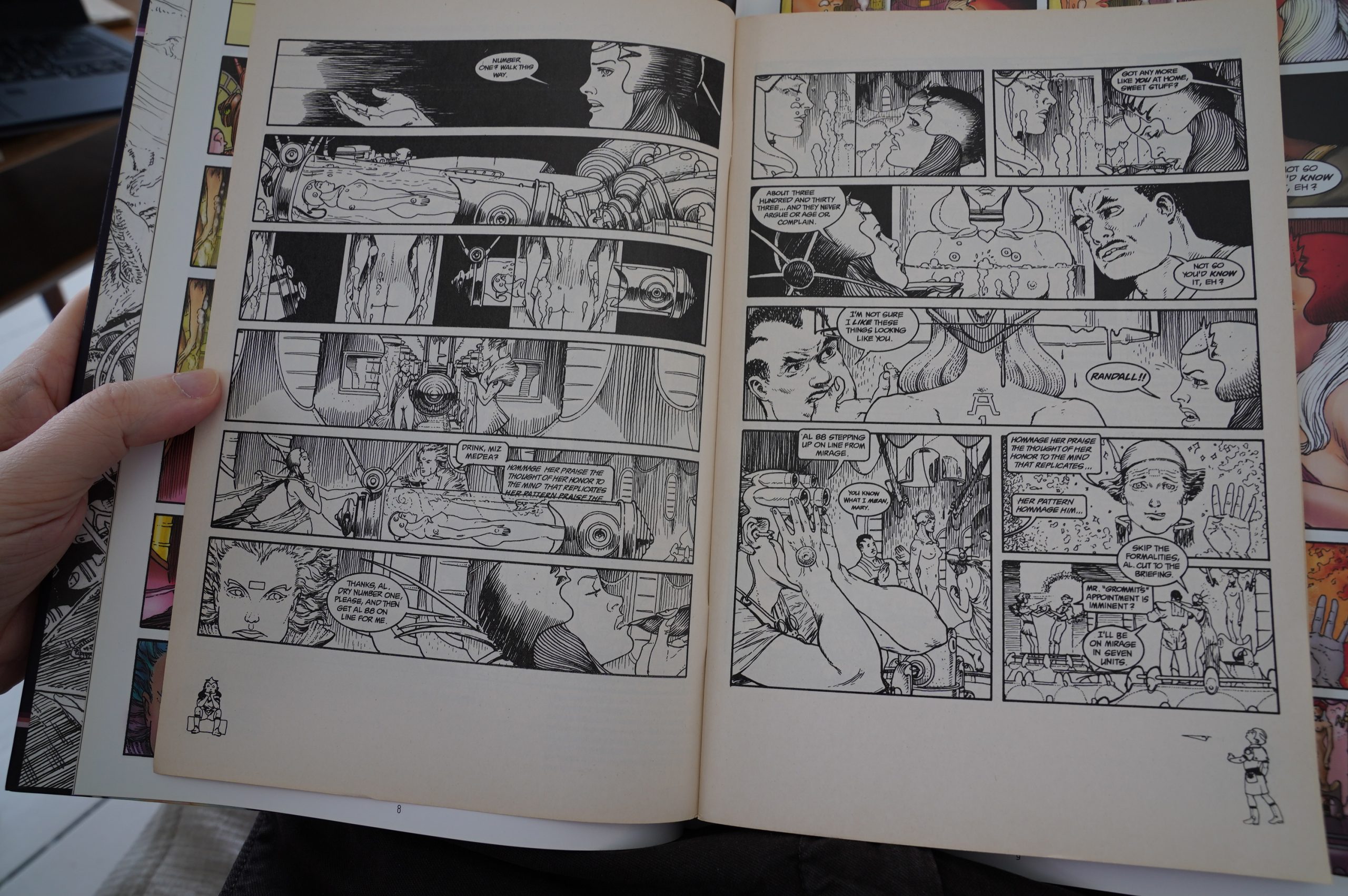 But these are the next pages from the Expanding Universe! These are new pages! So they did the new pages in the graphic novel ratio, even if the book is printed in comic book ratio? Perhaps they were aiming for a final collected edition that was all in graphic novel ratio?

I had assumed the IDW version was in comic book ratio because the new pages from the Expanding Universe edition were in that format, but… nope. 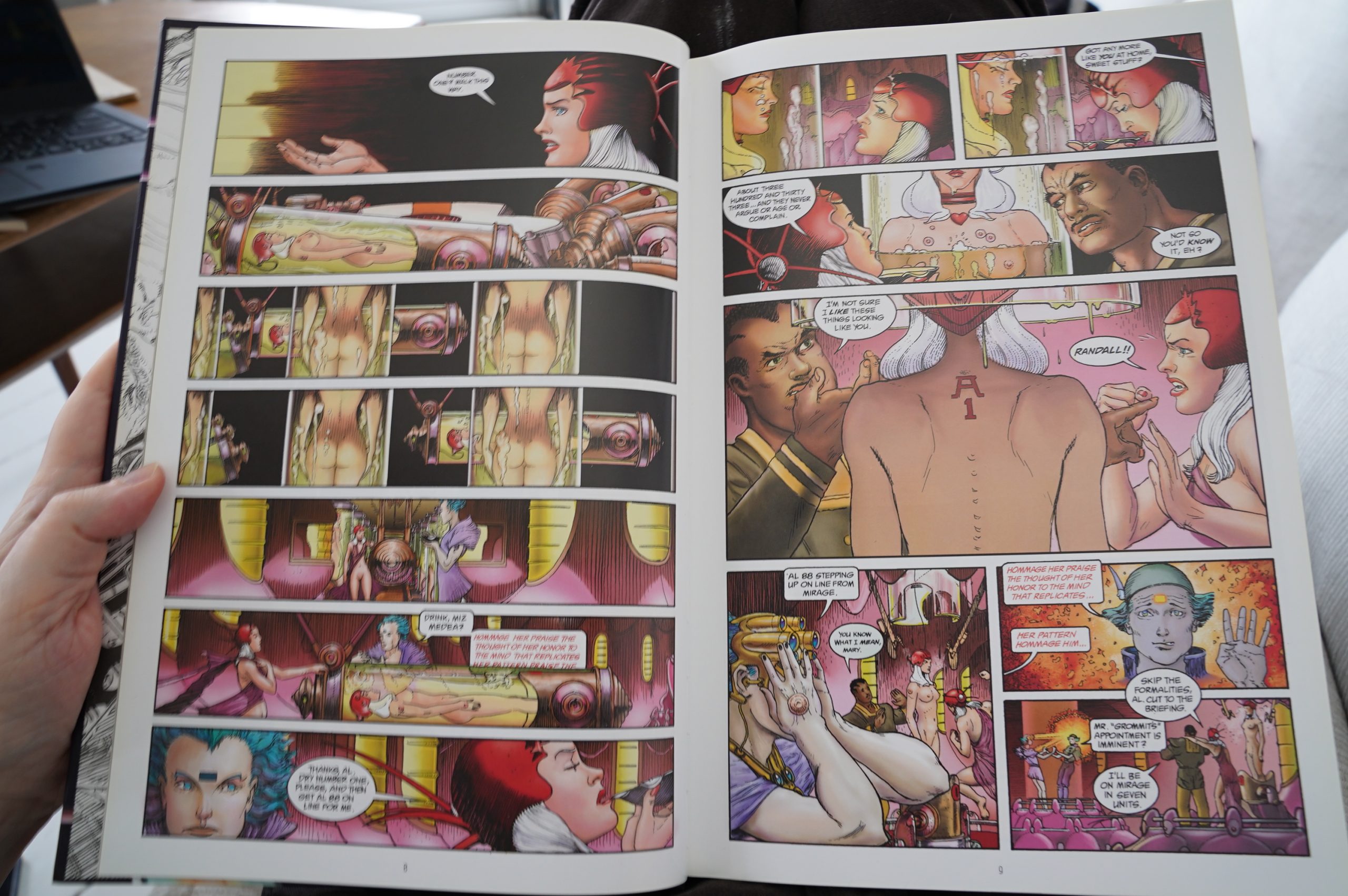 So even these pages have to be elongated. 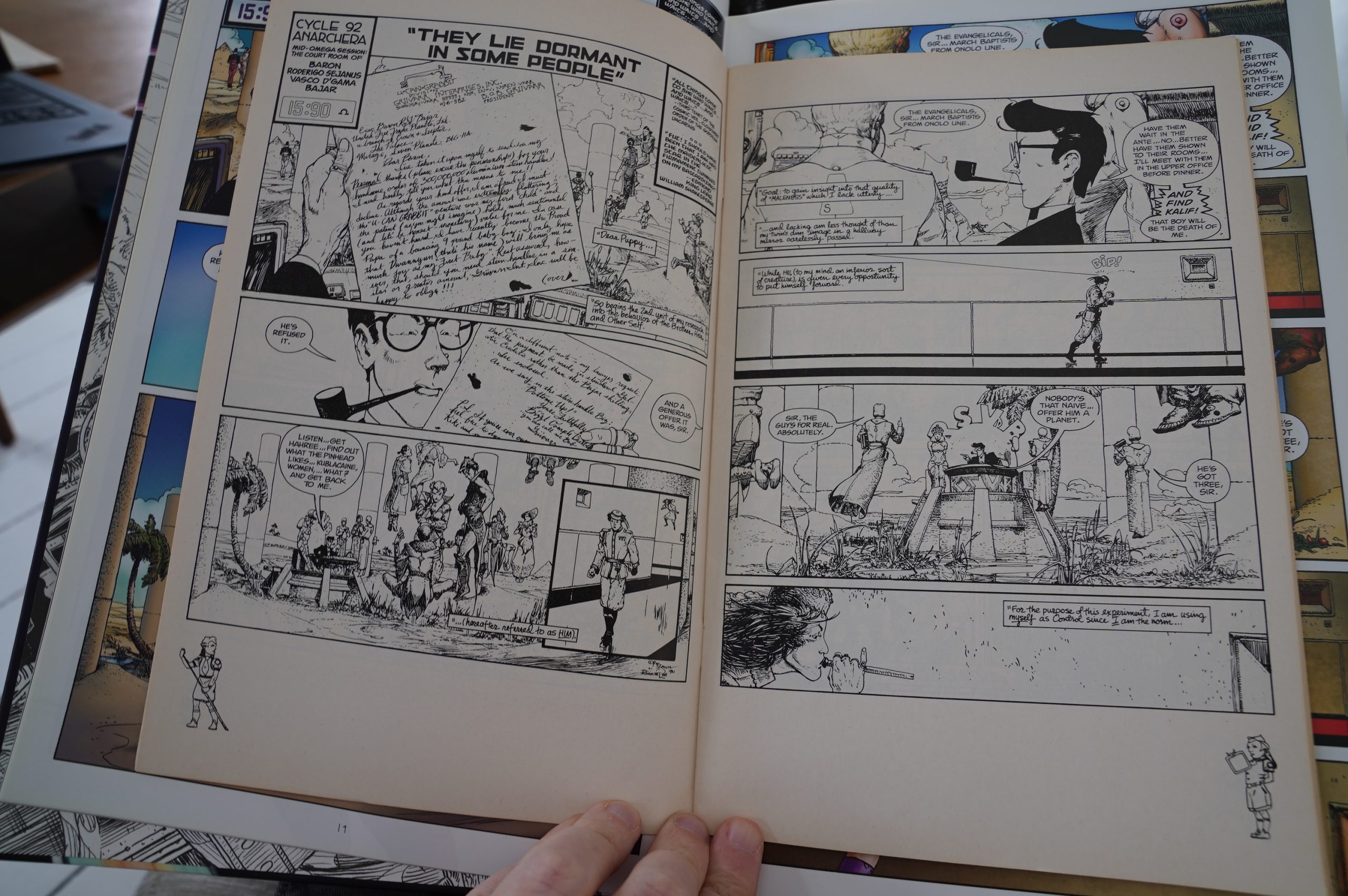 Then we’re back to the graphic novel pages… 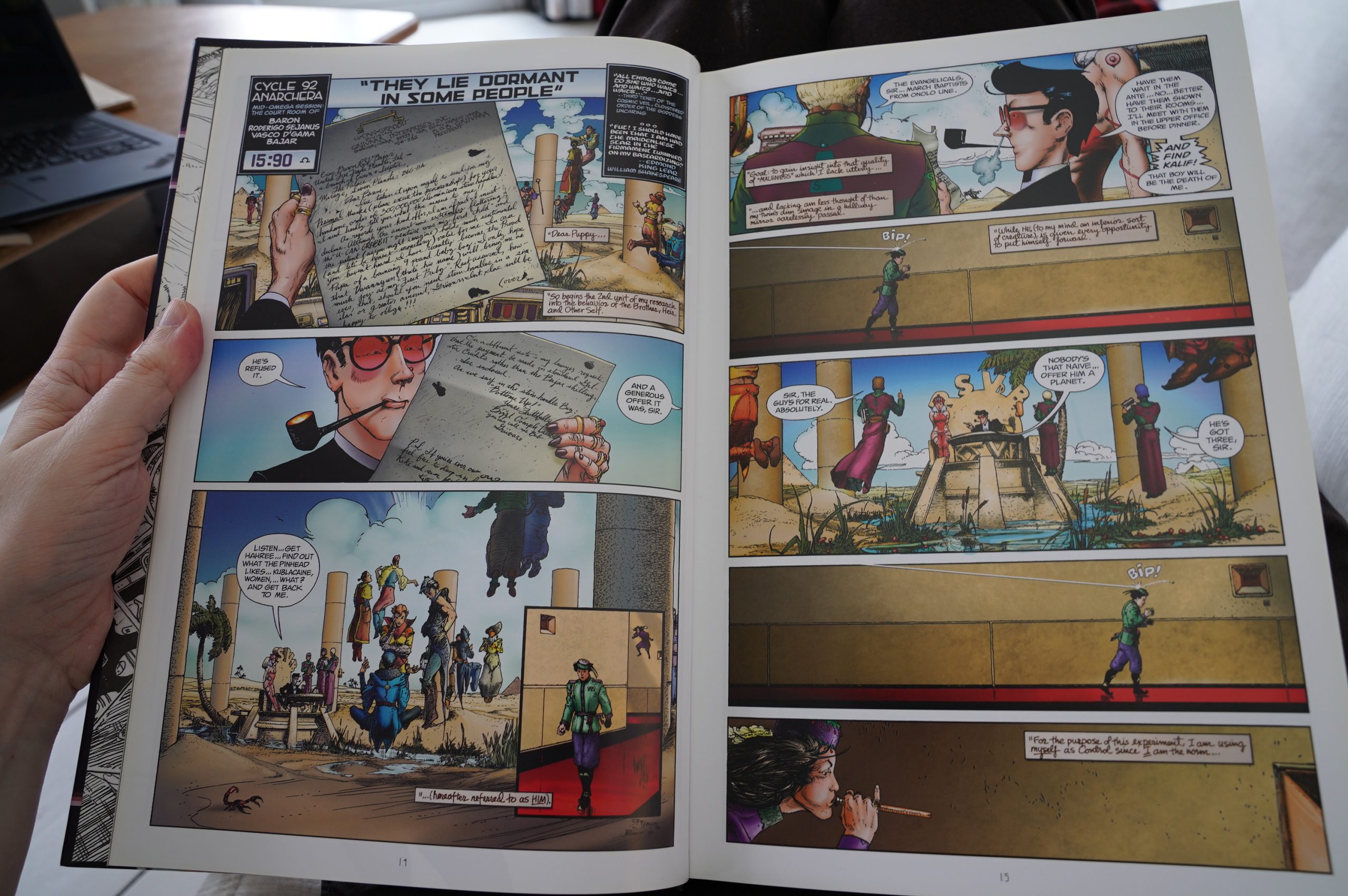 (here in biggenated version) again. It’s pretty seamless! Of course, Kaluta’s artwork has more of a 70s flair in the original version… the hairdos are just a bit more … soft. 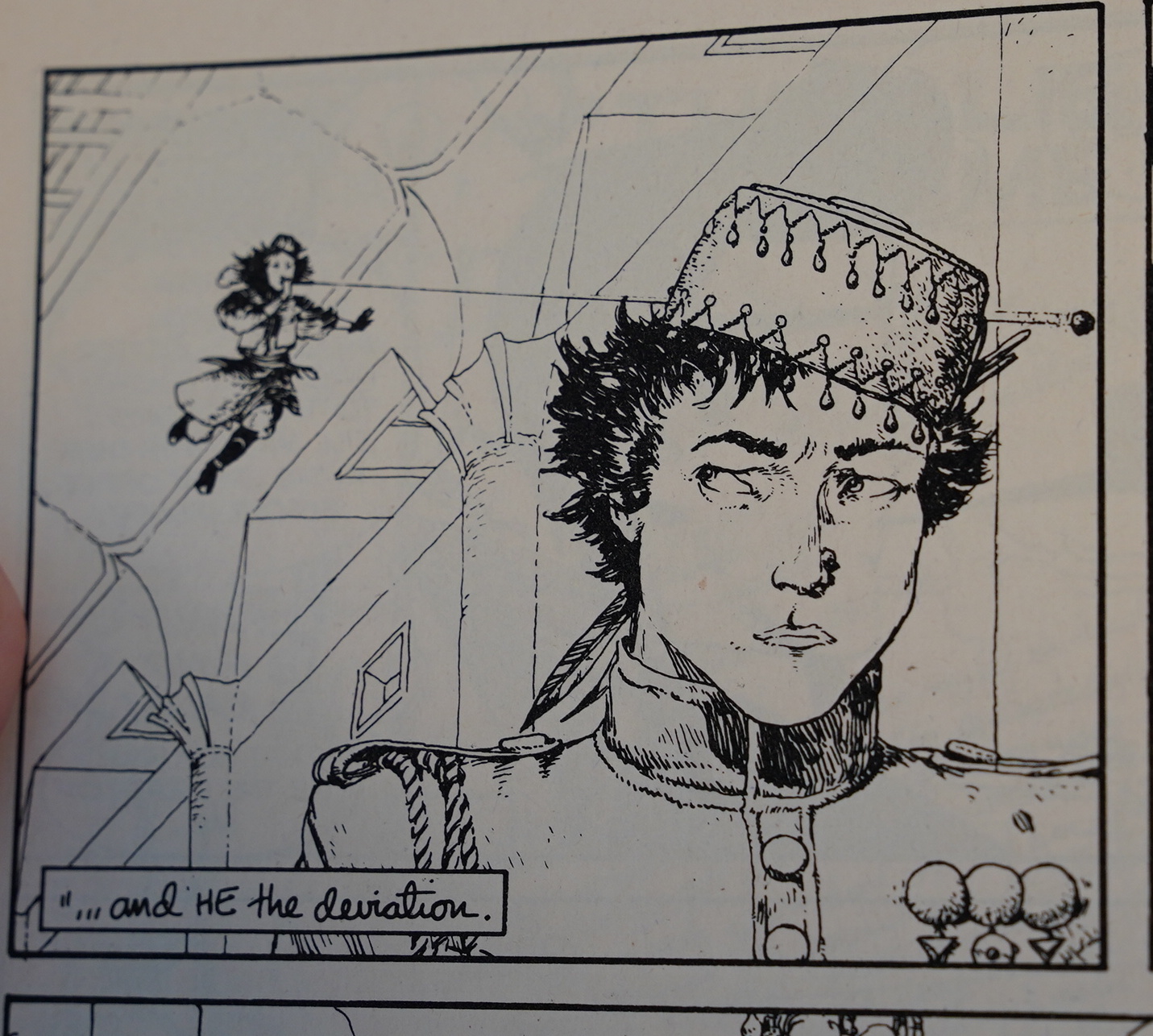 The printing in the Dark Horse edition leaves something to be desired. Sure, it’s printed in a smaller format than it was drawn for, but even so, the lines have a tendency to disappear into nothingness… 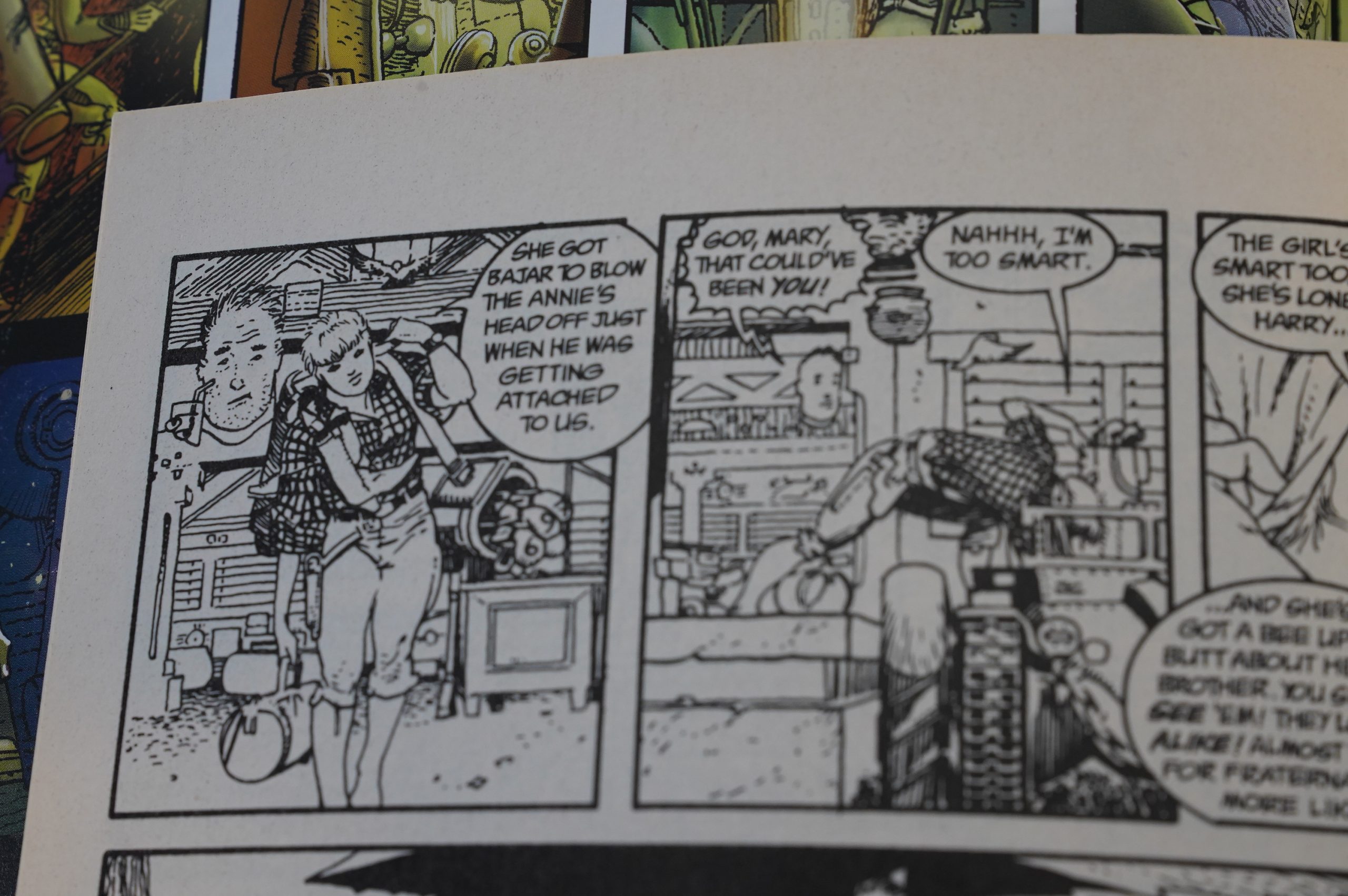 Basically, the Dark Horse version covers the same stretch of storyline as the graphic novel, and then adds the first issue of the Epic series. That’s ~100 pages originally, and this version is 200 pages long, so that’s 100 new pages.

So what’s on these pages, then? I mean, the original graphic novel was a great, fun, exhilarating ride. It basically… makes things clearer? I know that sounds like the most boring thing ever, and there are a couple of scenes (like the above) where the characters are talking about things that we already know (if we’ve been paying attention).

Fortunately, these explanatory pages are mostly confined to the start of the series, and then we instead get the backgrounds on Galatia 9/Bruscilla the Muscle (and other characters. It’s not that these are vital to the plot, but they’re really fun, interesting reading in and of themselves. The IDW edition is (except the enlongening) page for page identical with the Dark Horse edition: The dialogue is the same, and everything happens in the same order. There’s basically nothing new, except somewhat minor things like the heading on the page above. 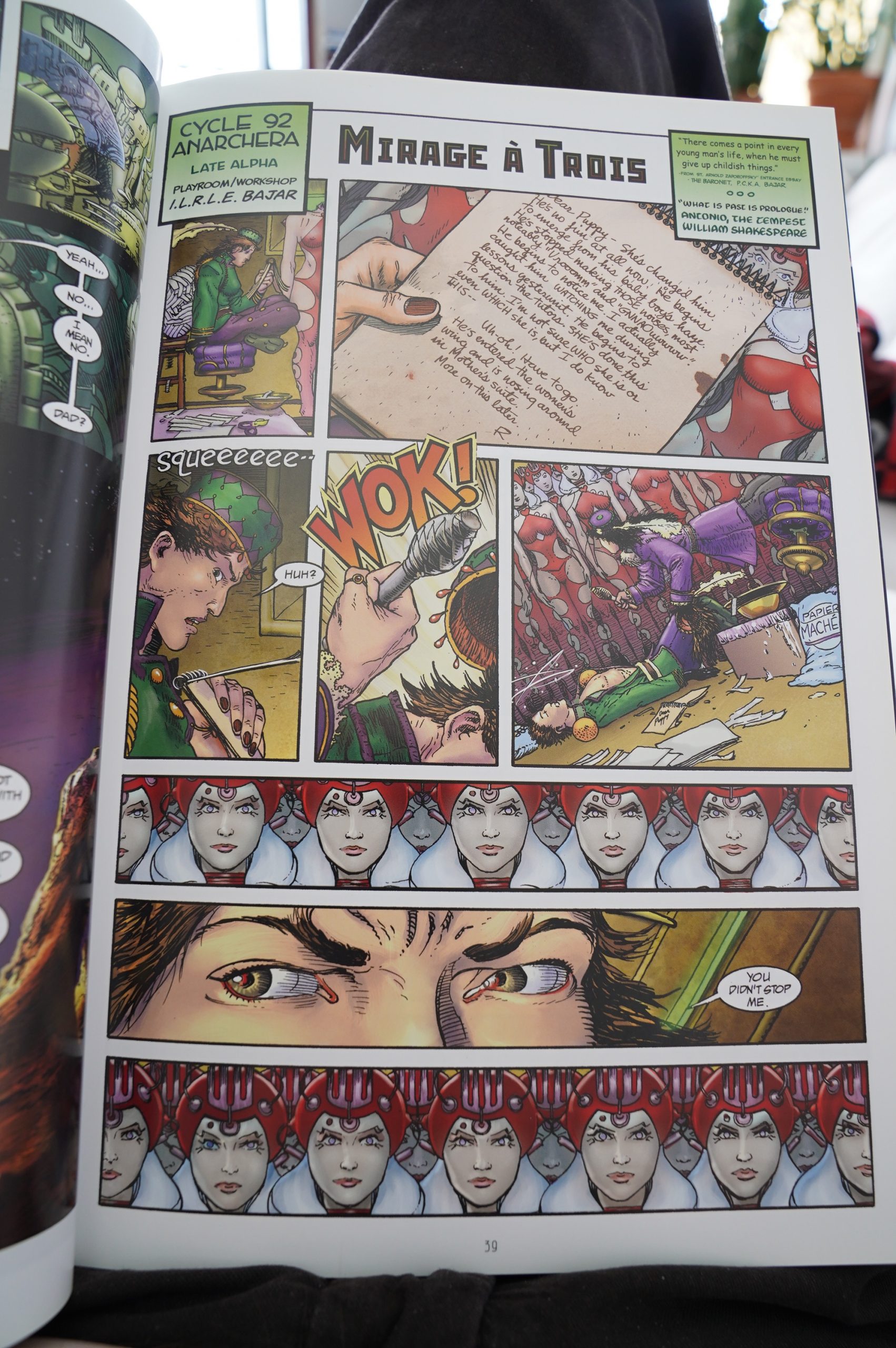 … which has gotten a date stamp and a quote in the IDW version. 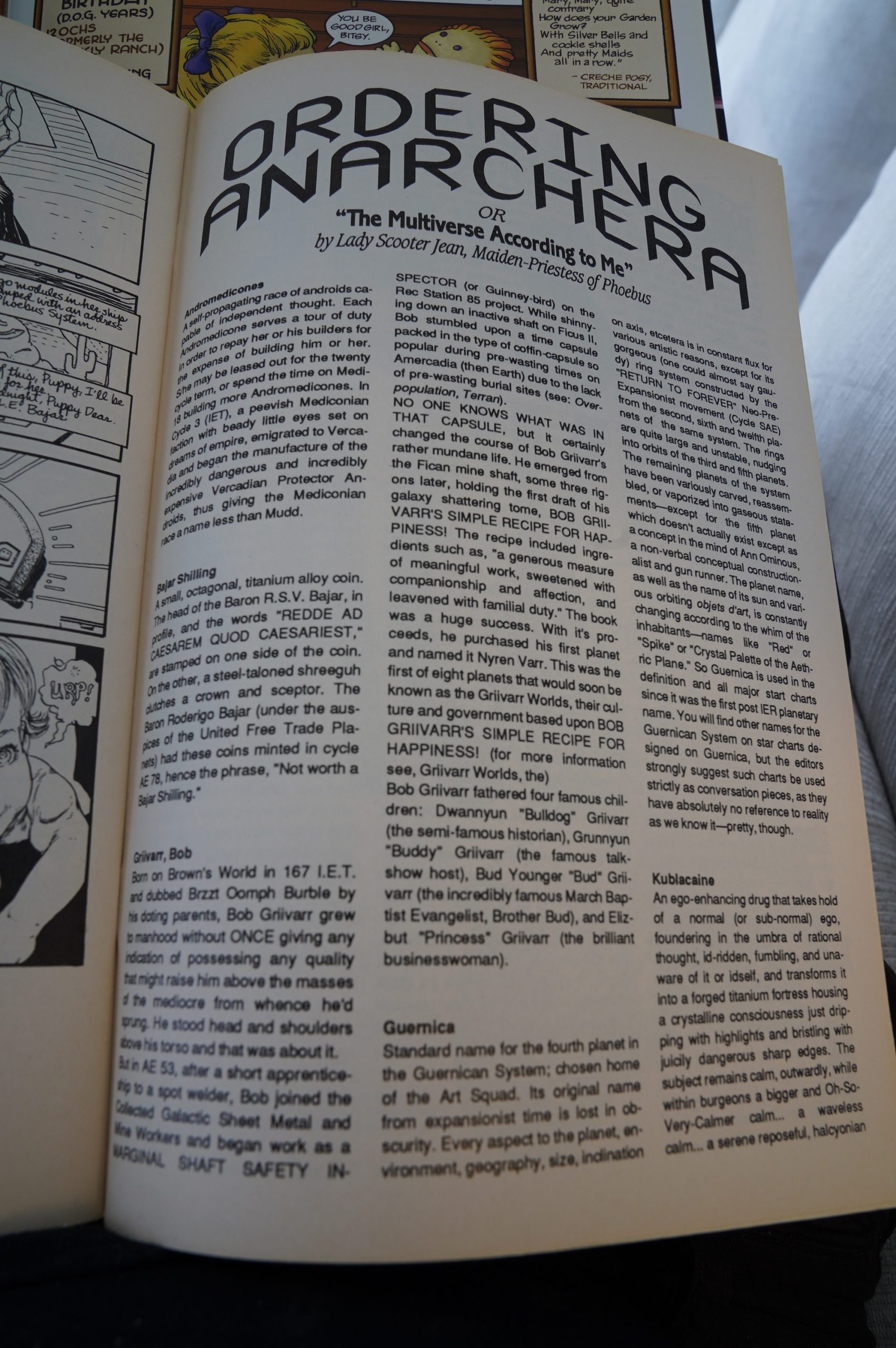 And, of course, we get the infamous dictionary entries that Starstruck has had since the Epic days. I love them. They often fill out details, or make connections between characters that you may not have already made. They… broaden and deepen the Starstruck universe without being a cop-out: They aren’t pages of text that you need to read to understand what’s going on; everything you need to know is in the comic itself, if you just pay attention. These are just extra fun bits. 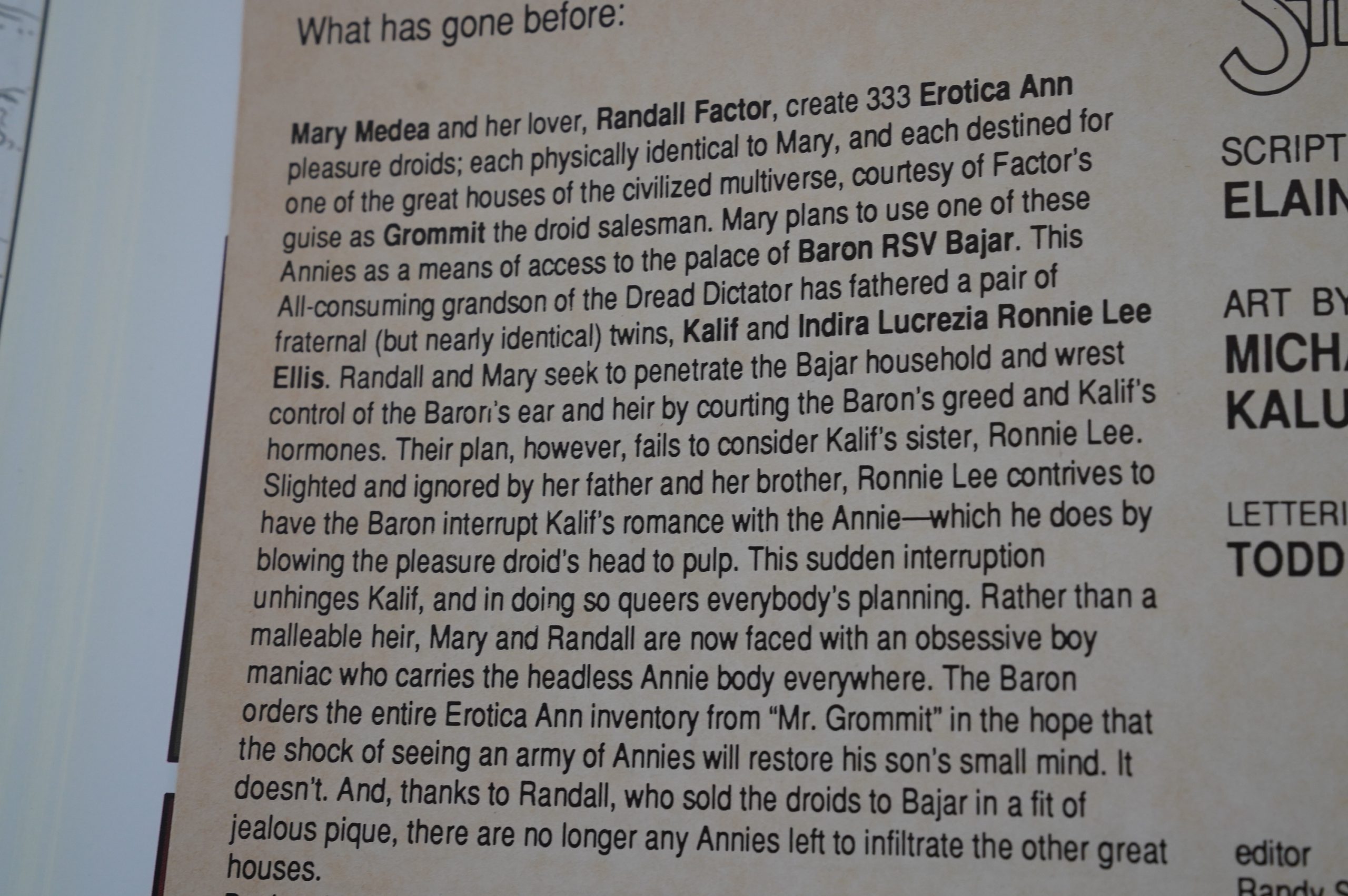 And, if you really piece together what’s happening, the recaps by Lee Moyer are very lucid and to the point. I guess kids these days may not get that panel, what with people probably more used to seeing themselves in selfies than in mirrors, but I just love that detail of Molly Medea above imagining herself as she sees herself in the mirror. (Not reversed scar.)

Anyway, I didn’t really plan on re-reading the series for real, like, but just look at the edition, but again I found myself engrossed in the book. It’s just such a perfect comic book. Kaluta’s artwork never fails to impress: It’s gorgeous through and through, and so inventive, but it’s also so damned readable. The storytelling chops are out of this world, especially considering how much this series is about identities and self, which means that you have a bunch of characters that look (on purpose) very similar… and yet it’s never confusing. (Except when it’s meant to be.)

And reading it this way, comparing and contrasting editions, you’d think would take all the fun out of it. But it totally doesn’t, because it’s already a work that you really have to stop and think and go “but wasn’t… yes! hah! hah!” a couple of times per page, so all these editions just makes it even more of a fun puzzle. Oh, I said that the IDW version was identical? I lied. There’s (I think) three totally new pages, and they’re mostly like that page on the left. (I looks like filler, but it does totally make sense in context.) That means that we get a different left/right page dynamic on many of the spreads, but I think that perhaps the IDW spreads are slightly better. And then… we run out of graphic novel pages. And here’s the first Epic Comics page, so we continue straight onto the Epic Comics version. Anyway, the additional pages stop when we reach the Epic Comics portion in the final issue (which is 64 pages long; the others are 48 pages). So all the additional 100 pages went into the graphics novel expansion. Except… the page above which was added to the end… Which is sort of mashed up with an original Epic page. It does help with the flow a bit, because the wax guy came in a bit abruptly originally.

Anyway, I’m guessing that means that the next four issues would mostly reprint the remaining five Epic issues, and then we’d finally get the continuation in the final four issues?

Instead we had to wait until 2015, when Lee and Kaluta published the kickstartered Old Proldiers Never Die, which does indeed reprint the remaining Epic issues, but I haven’t done a comparative reading, so I don’t know how much it expands upon it. Anyway: The more I read Starstruck, the more I love it, and I already loved it to bits the first time I set my eyes on it.

If you haven’t read these books yet, hie thee over to bookshop.org.