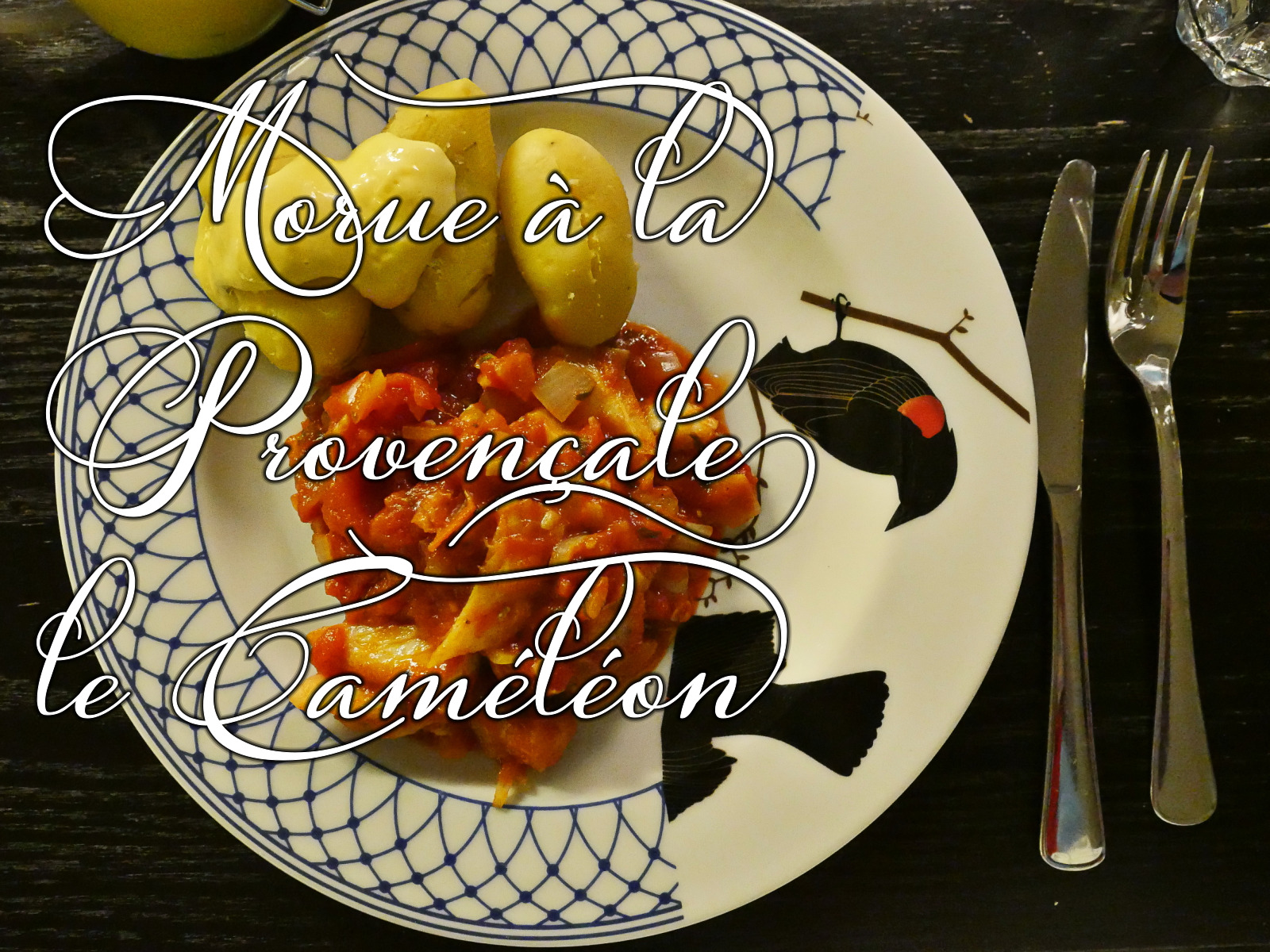 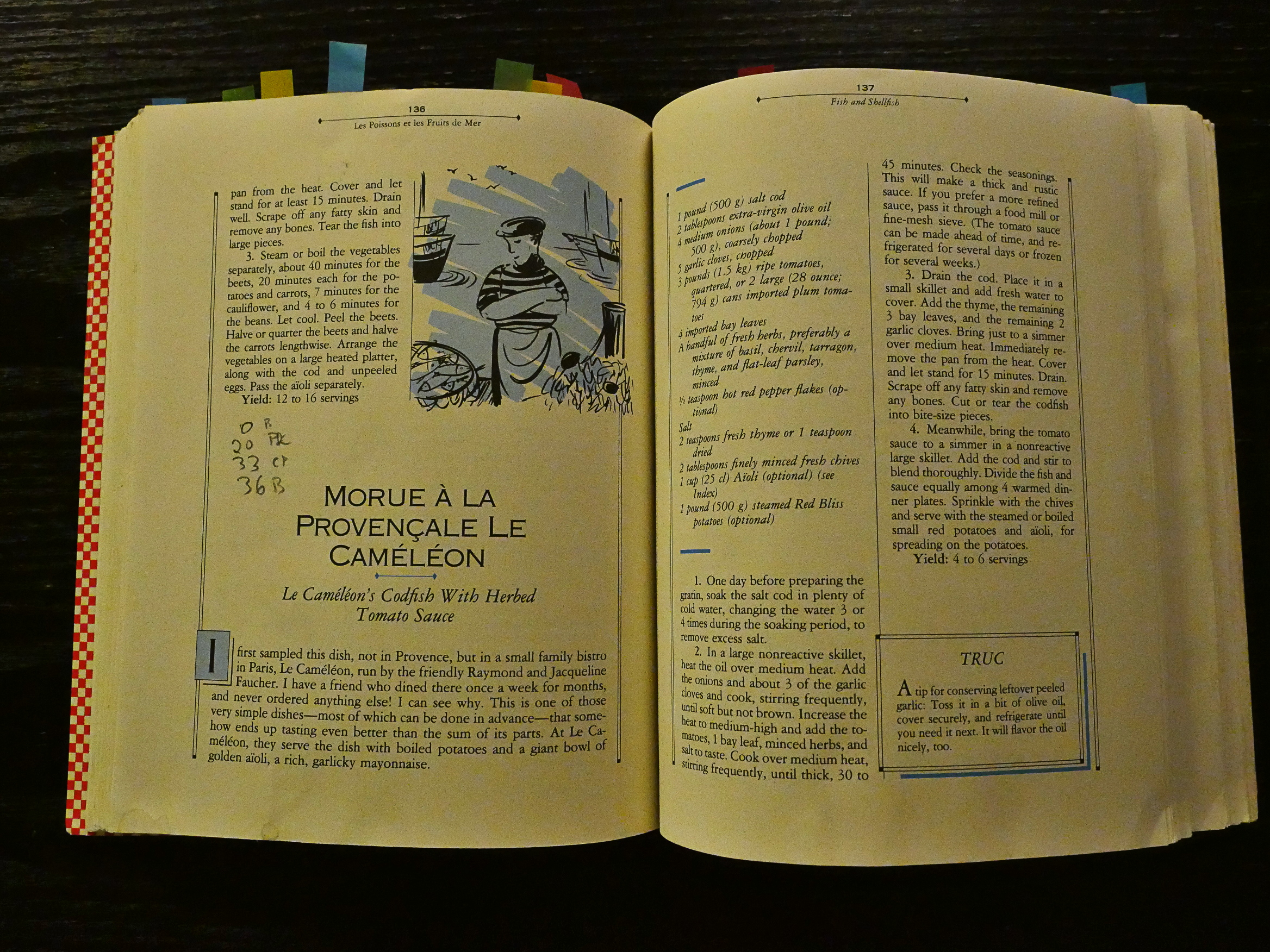 The salt cod dishes in the Bistro Cooking book have been pretty spiffy… this one looks like it’s in a more bacalaoish direction than the previous ones, what with all the tomatoes and stuff. 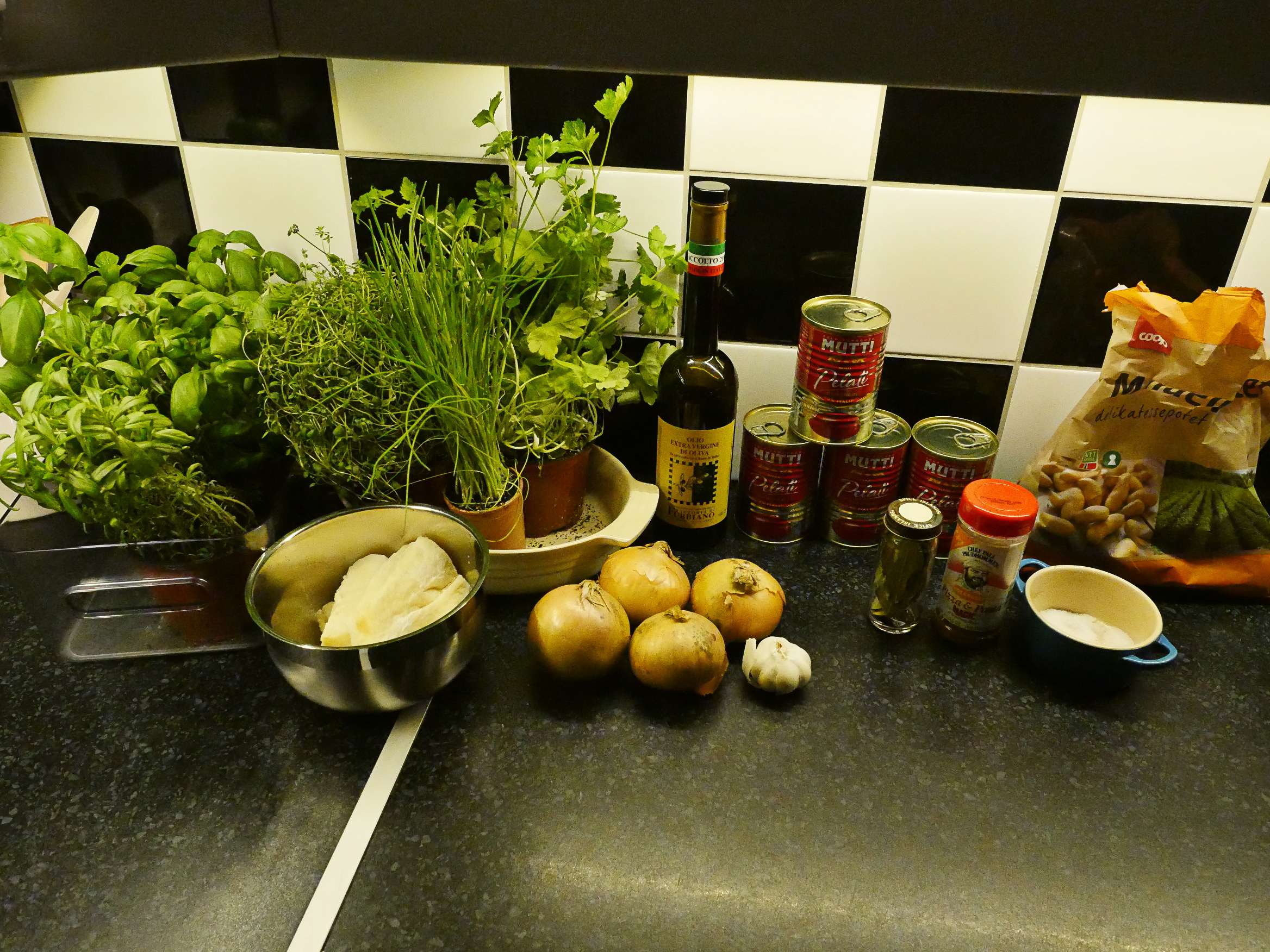 There’s all the usual stuff… and then a whole lot of herbs. Even before starting to cook, it smells delicious. 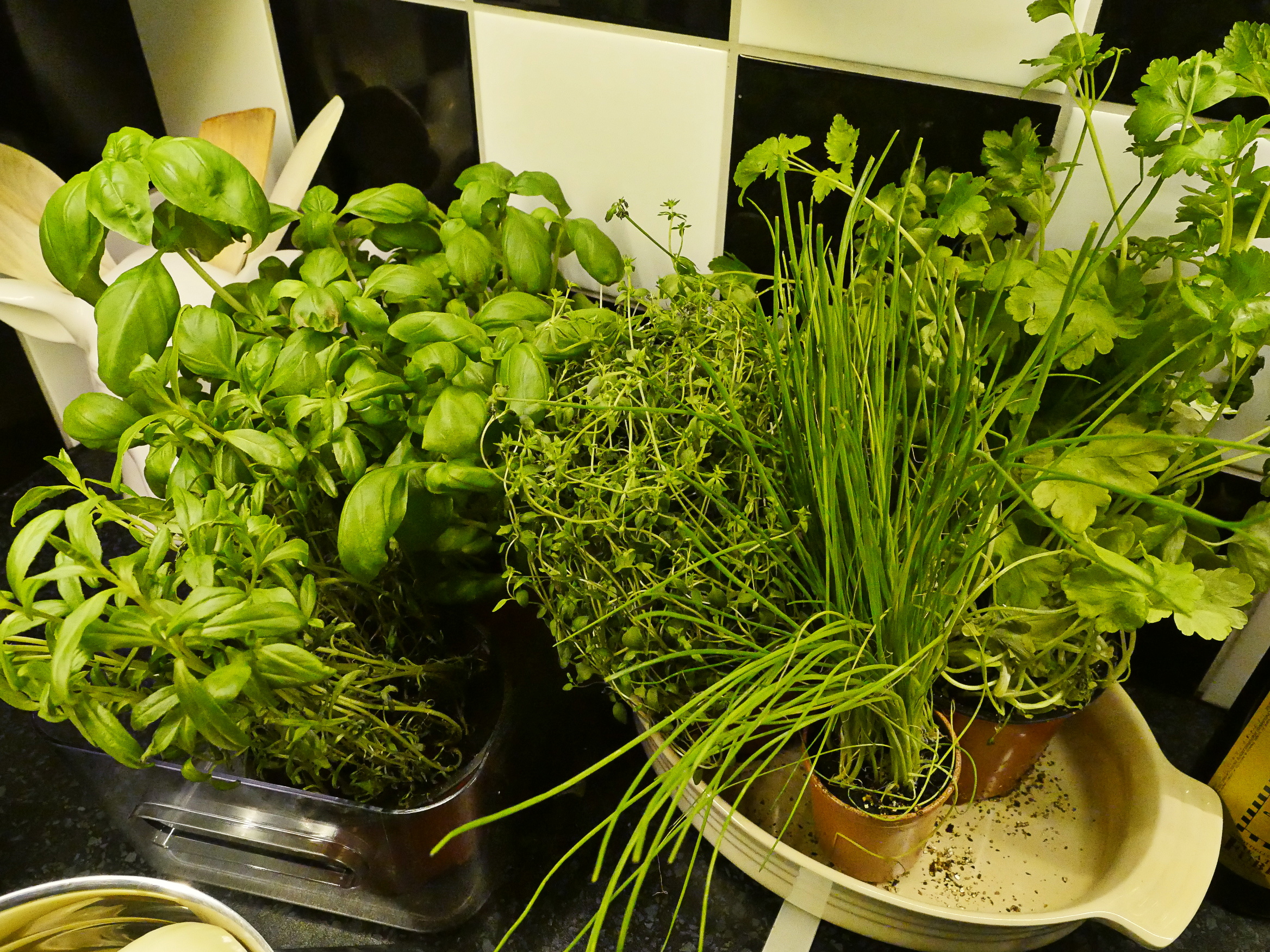 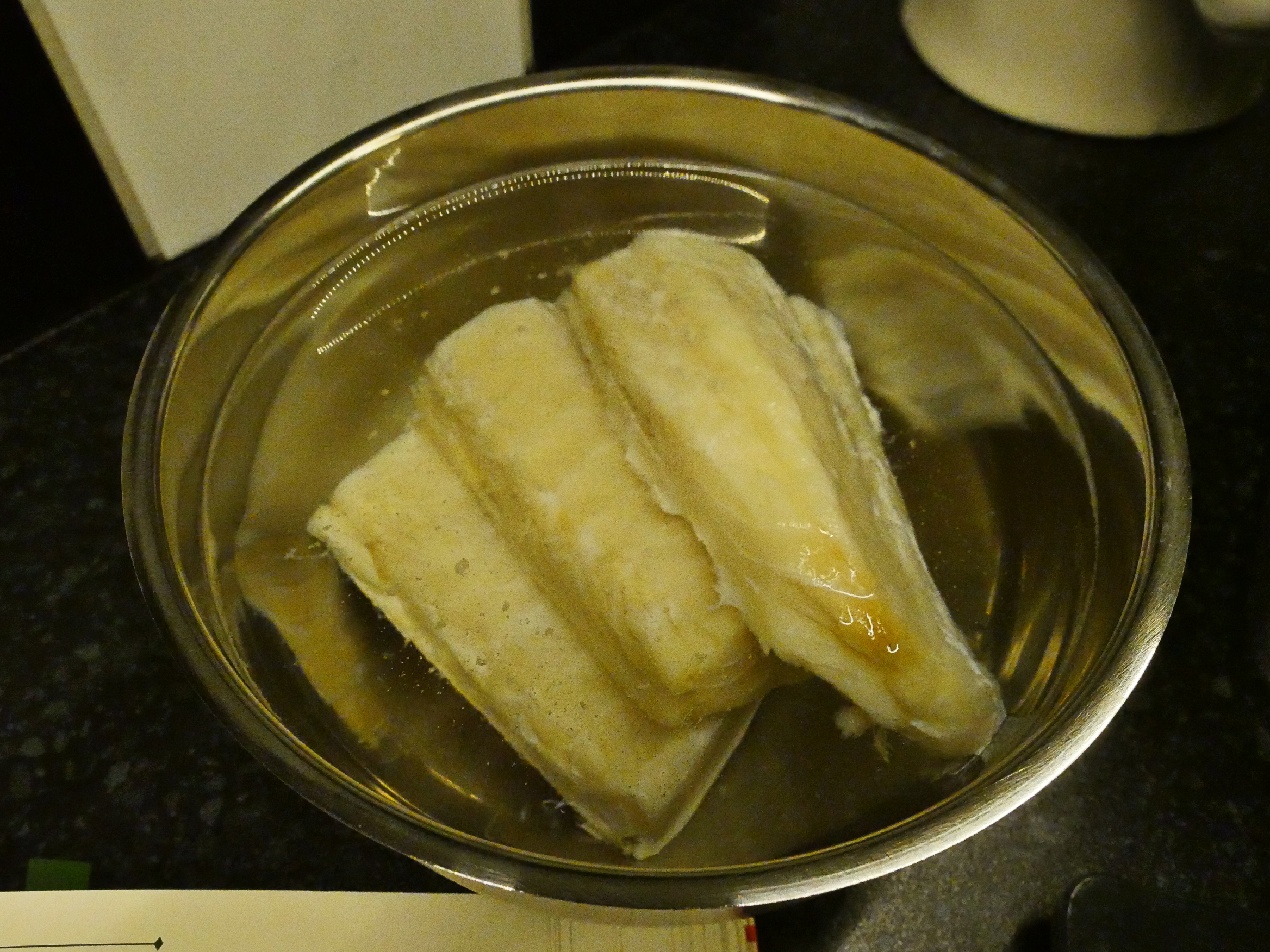 Oh yeah, there’s the salted cod that I’ve been watering for a day or so. 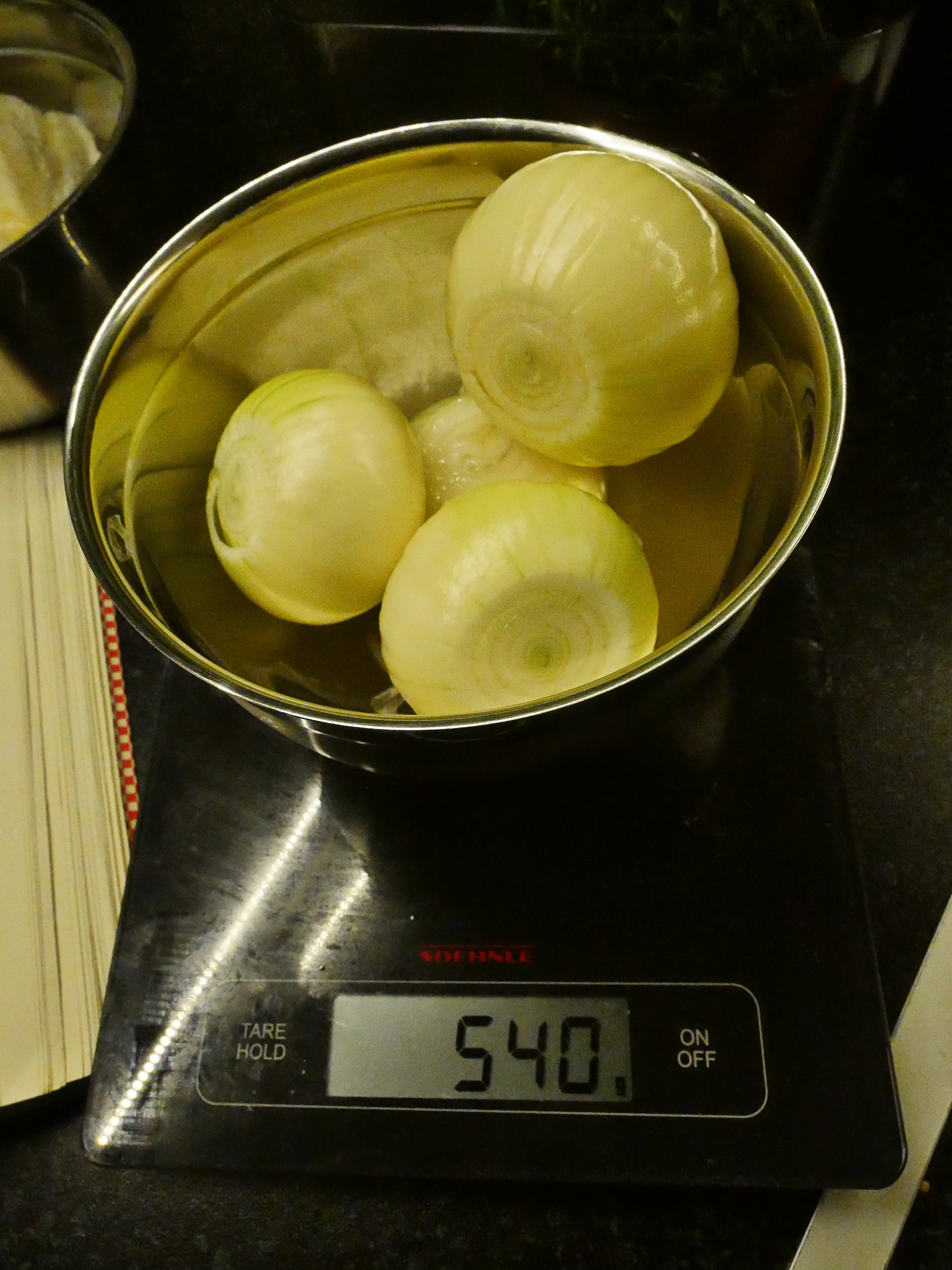 My favourite kitchen implement (after my new spiffy knives) are these bowls. I’ve got a whole stack of them, and they stack really well, so they take next to no room, but whenever I need something to put something in, these are usually perfect. And very steely. 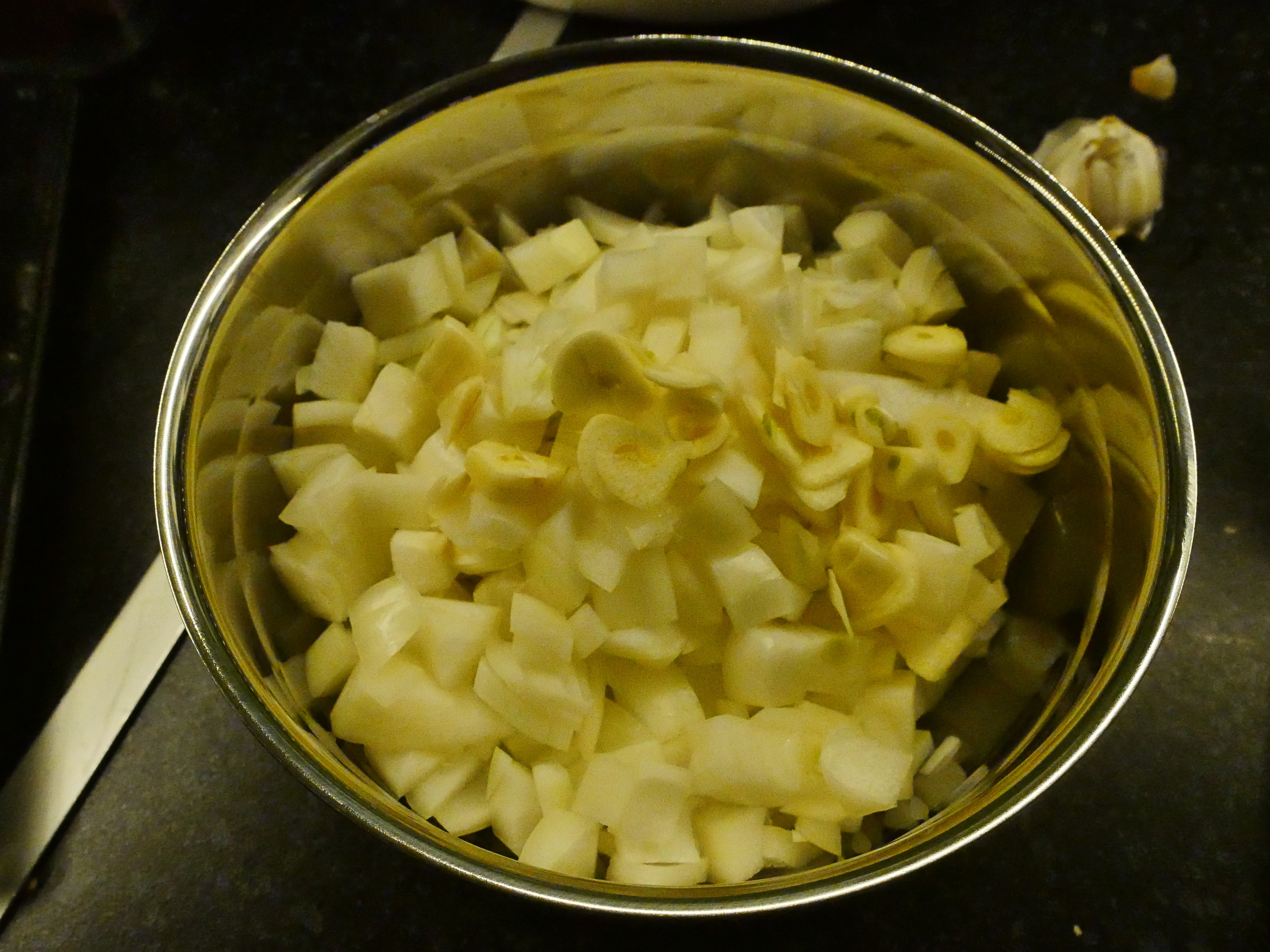 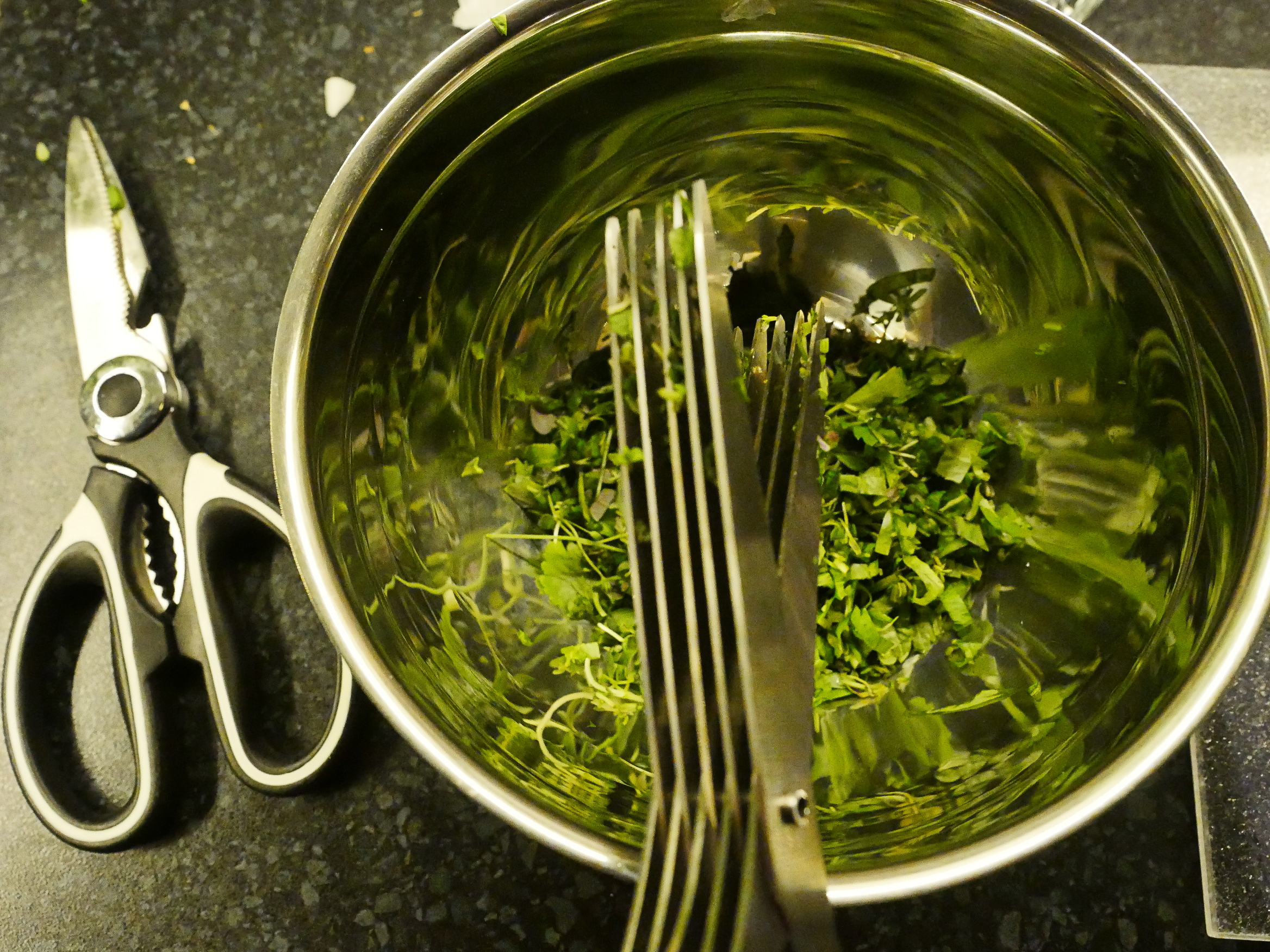 These herb-cutting shears are also really nice. Dishwasher safe, too. Makes chopping herbs so much easier and faster. 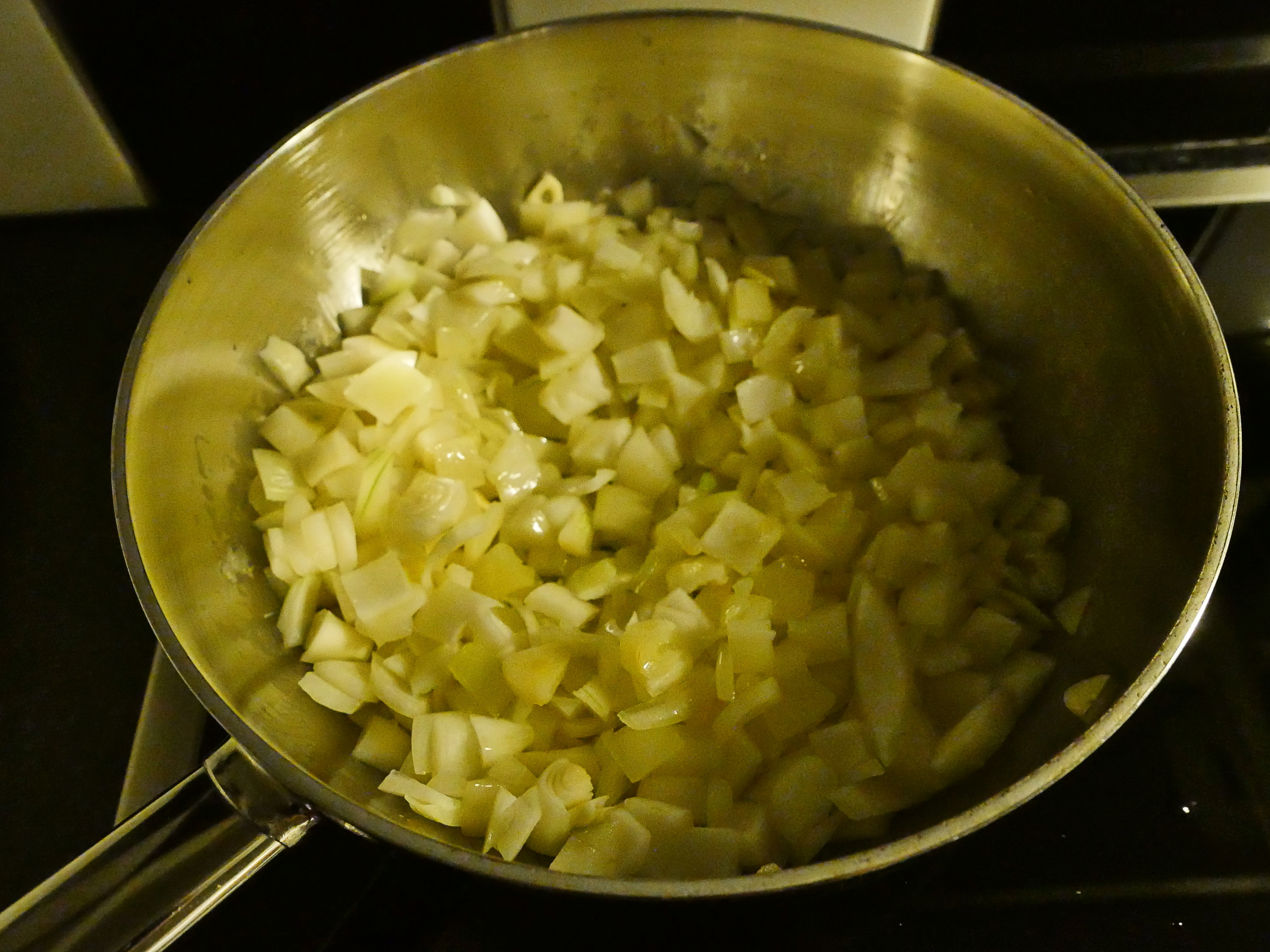 OK, so the onions go into a pan to soften up… 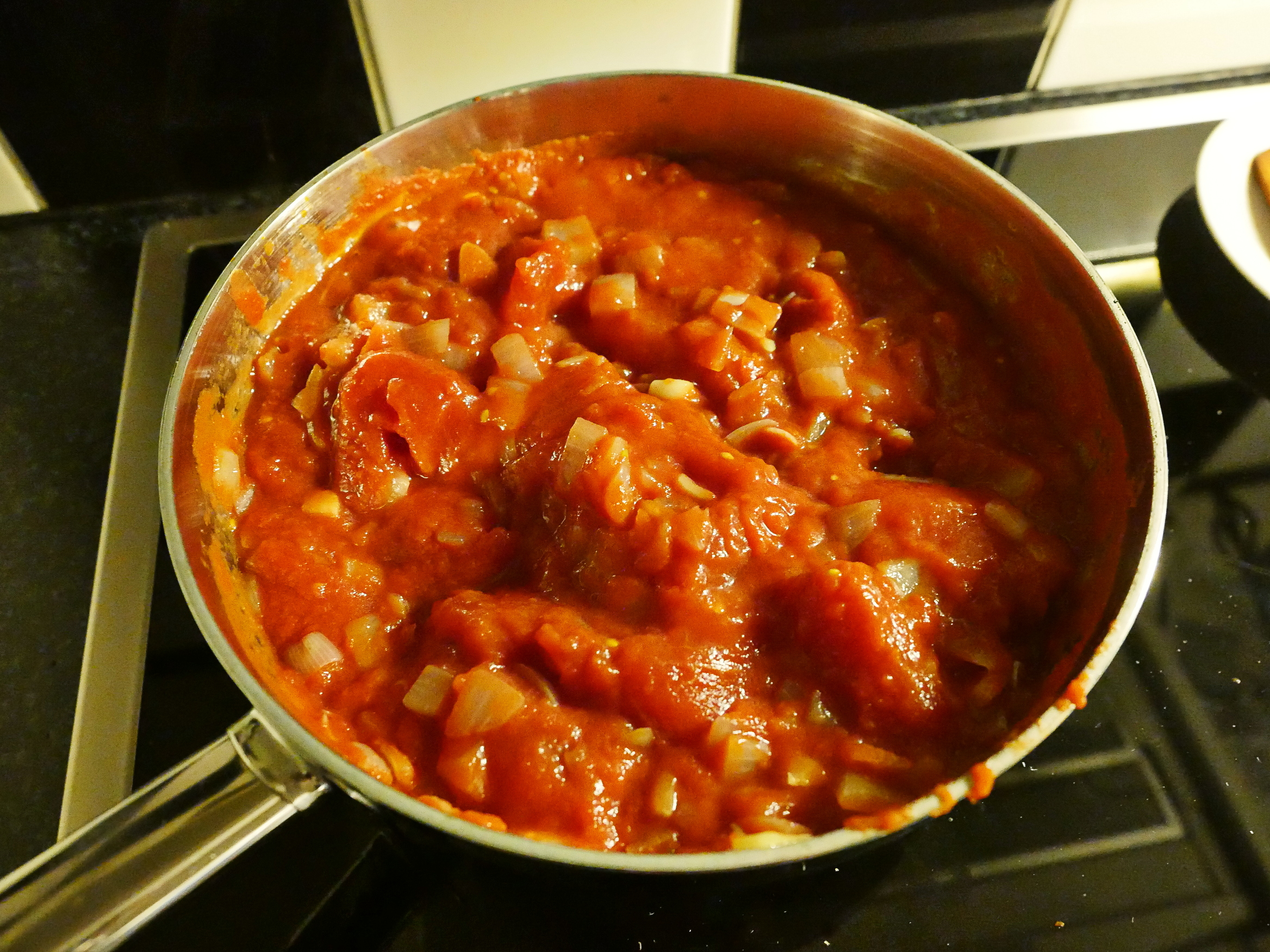 And then dump in all the tomatoes. And then all the herbs. Mmm. 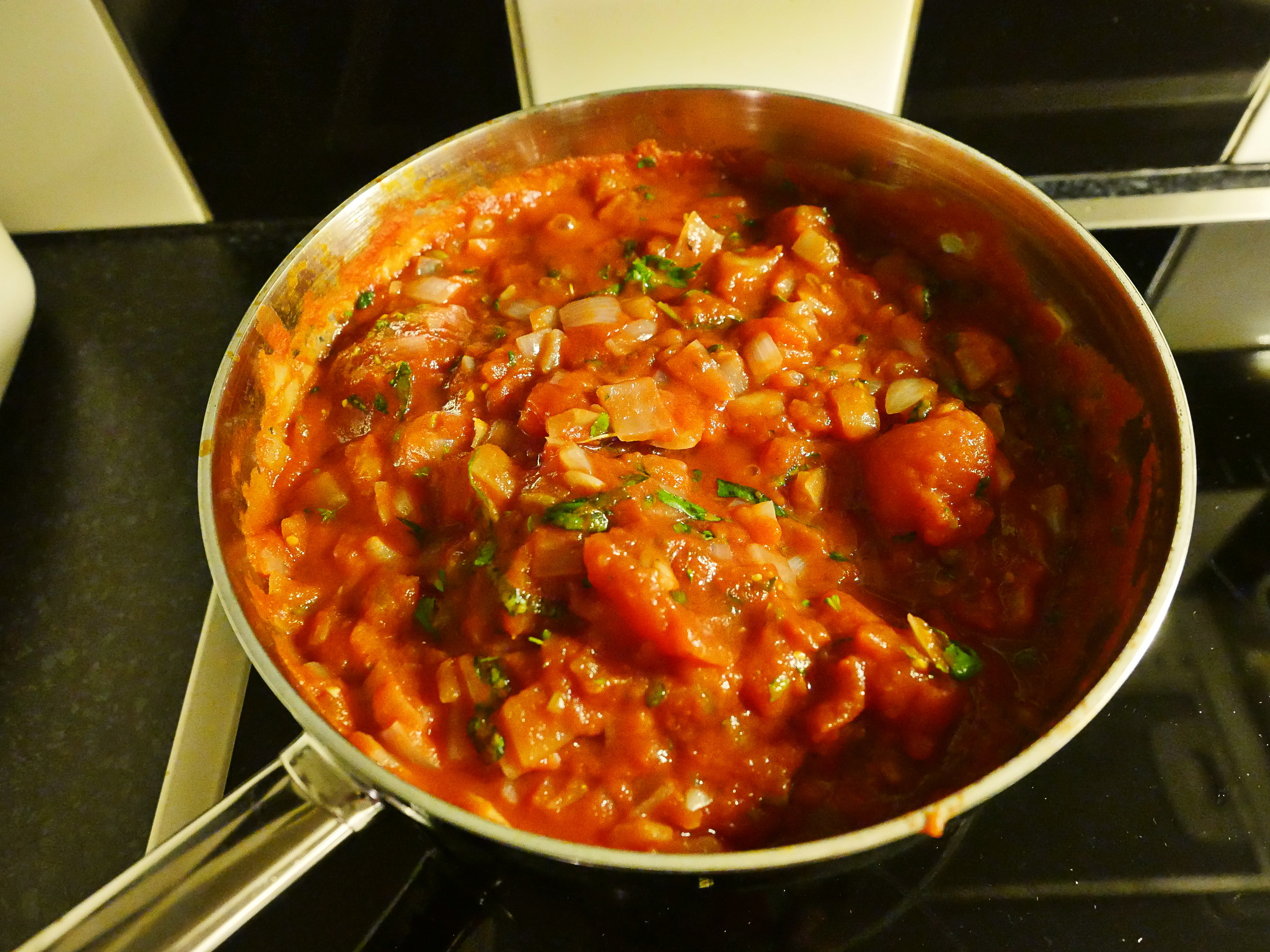 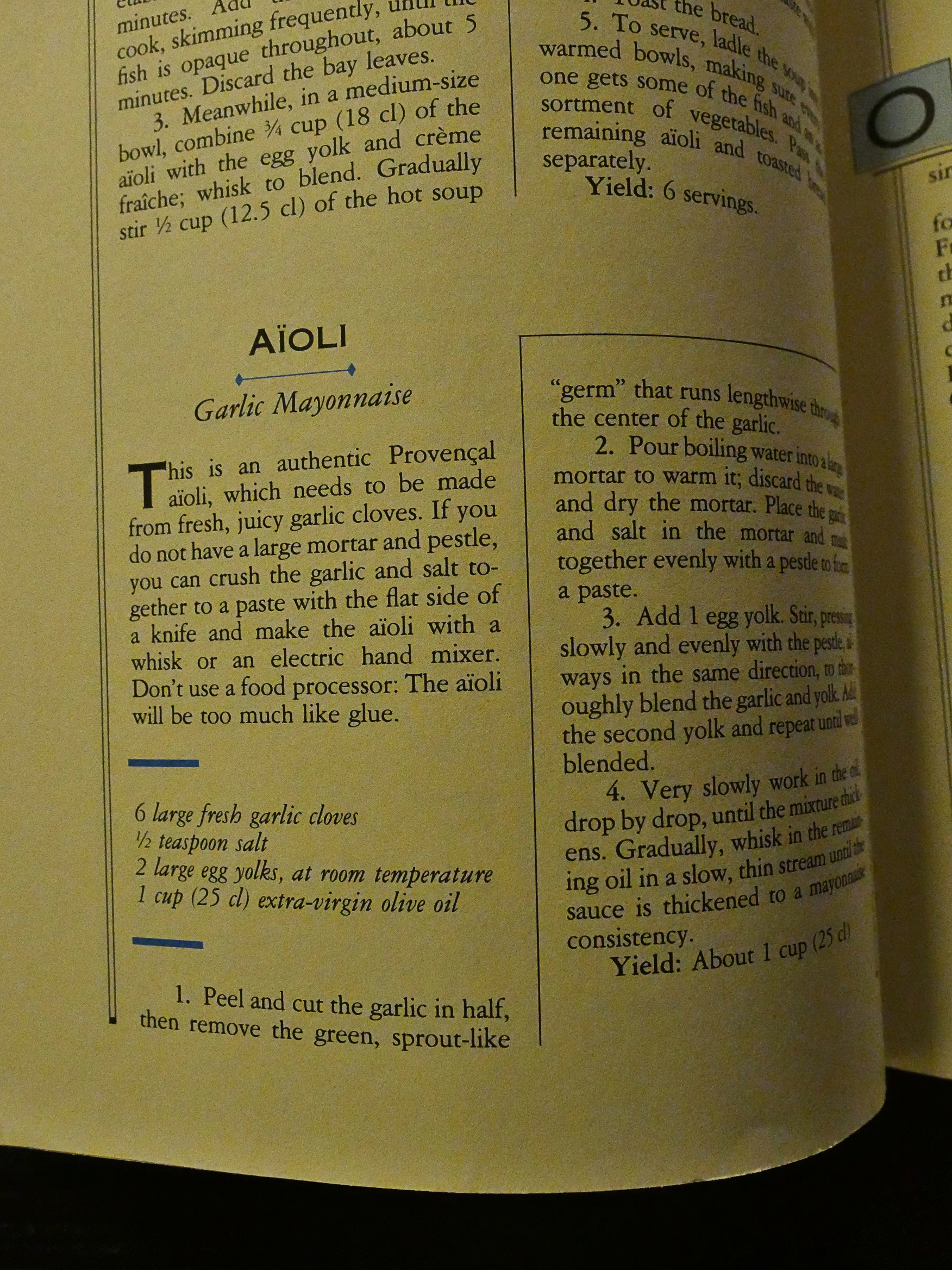 And there’s aioli to go with the potatoes.

I’ve made aioli before, but it was not a huge success. You see that recipe? Garlic, salt, egg yolks and extra-virgin olive oil? Basically everybody agrees that that’s a totally loopy recipe: It tastes way harsh. Most of the other recipes add lemon juice and Dijon mustard, so I’ll try that this time. So it’s garlic and salt… 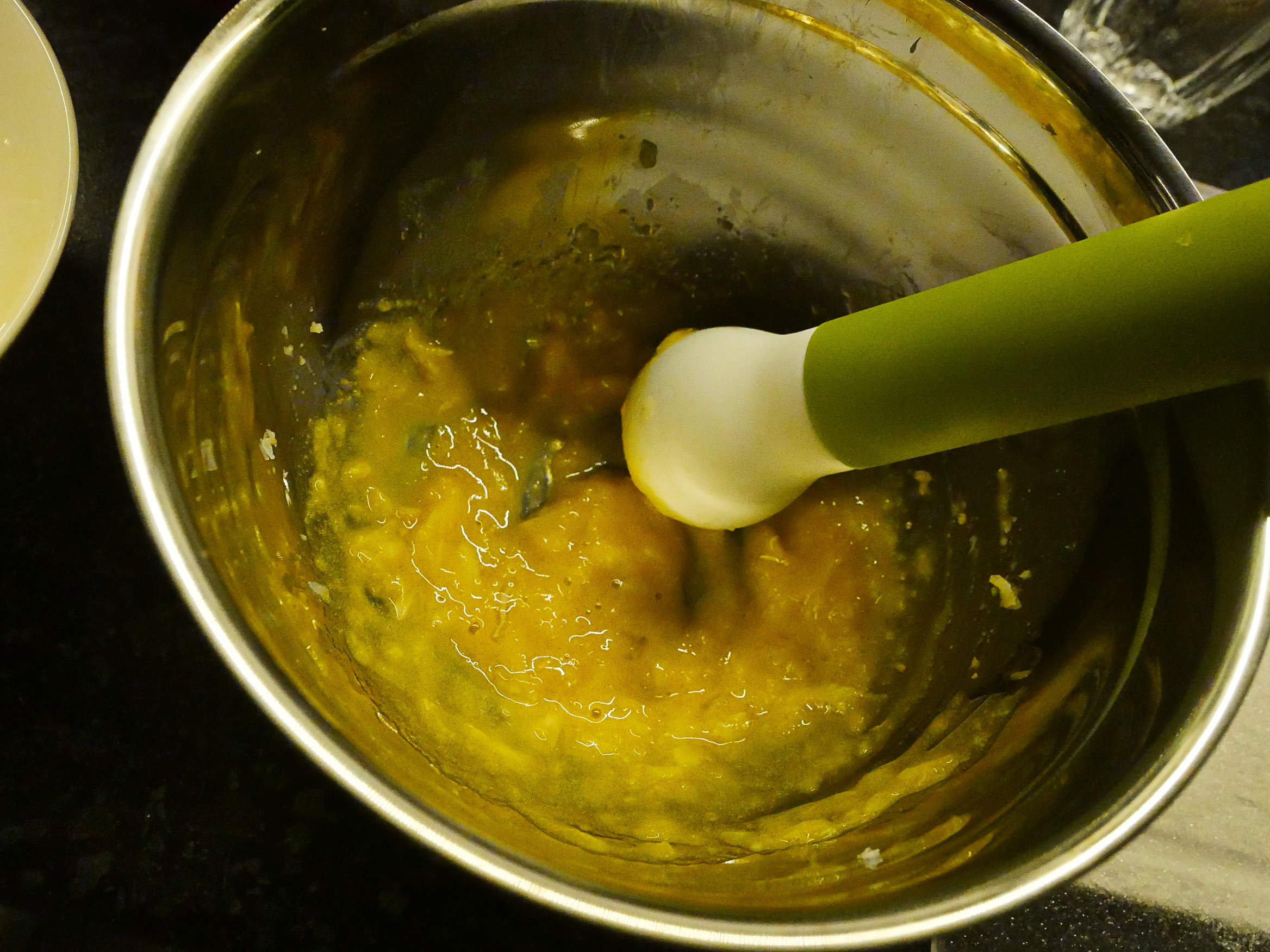 Mashed with a pestle. … and then stir in the olive oil slowly. It didn’t break! And then I added lemon juice and mustard… and it was still pretty harsh, dude.

I see that basically everybody else recommends using mostly neutral oil, and just one third extra virginity stuff, and I think that’s a very sound idea, because this was balls-to-the-wall virgin, man. Meanwhile the sauce has been puttering away… … so it’s time to start the cod. Bay leaves and thyme… … and then tear it all up. Looks pretty bad, but it’s a bit on the delicious side. And then into the onion and tomato sauce for a couple of minutes. Oh, I need something to read while eating. The next book on the shelf is What If It’s Us by Becky Albertalli & Adam Silvera, and I have no recollection of buying it. Let’s read the first three pages: And served with boiled potatoes with aioli. Hm… well… it’s OK? But the tomato sauce definitely needs more… more… It just needs more. The sauce was rather flat: It needs more garlic, more herbs, and more chili, and perhaps some paprika? I mean, it’s not bad, but it needs more. The book tries so hard have the repartee be witty, but mostly land on “well, that’s an awkward stream of words” instead. I appreciate the effort, but it’s not actually funny. And I’m not the prime audience for this book (you may be surprised to learn that I’m not a teenager *gasp*), but everything in this book is so deadly earnest. Whenever our two protagonists get together, one of them will say something that’s just So Seriously Inadvertently Wrong that there’s all this sadness and low-key drama that ensues that it just gets a bit unbearable after a while. There’s four hundred pages of this stuff, and it’d be excessive at half that length.

Still, there’s some cute scenes here and there. It’s fine.

But it needs more.

Which made this a perfect pairing with the dish.