I have my music on an USB3 RAID5 consisting of three external disks connected to one of these, which isn’t a bad little computer: It’s has a 1.7GHz i7-3517UE (Ivy Bridge) CPU, so it’s small, but not horribly slow.

But then one of the disks went AWOL and I thought that perhaps it was time to upgrade the disk array. It’s about seven years old, after all, and surely things have gotten better in the meantime.

My main use case, is, well, it’s a file server that I play music off of: 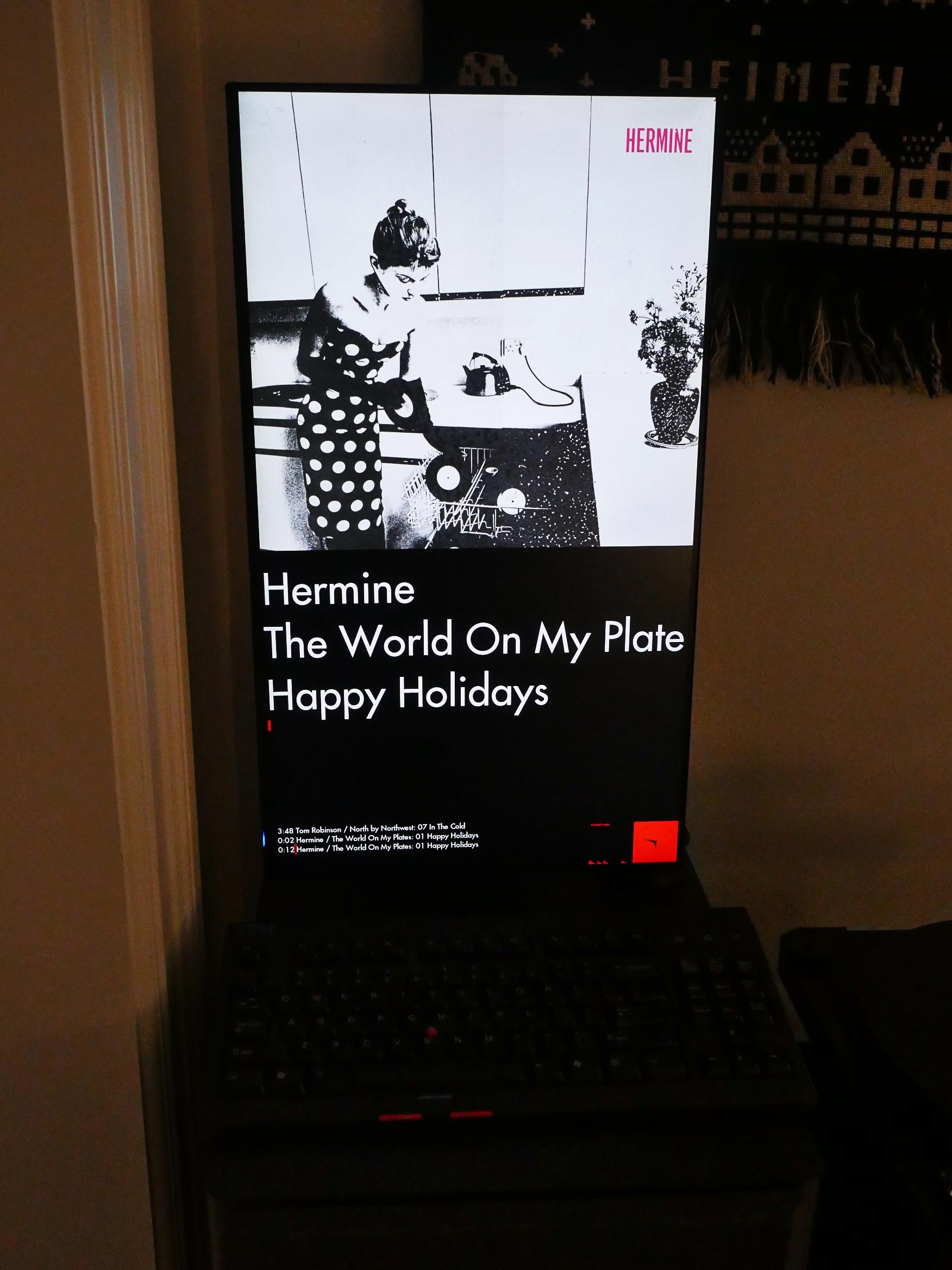 That’s not a very strenuous task: It basically has to feed out FLAC files over NFS faster than my stereo machine (pictured above) can play them, and basically no machine made after 1987 is too slow for that task.

But my Emacs-based music player doesn’t do any caching of metadata, so if I ask it “show me all the 8K records I have in chronological order”, it has to read eight thousand files, and that takes a while if the disk is slow. This is a problem that has grown year by year, of course, so it’s another reason to explore faster disks.

(I mean, I could add a caching system to my music system, but to quote what Leonard Nimoy said in The Empire Strikes Back: “Meh.”)

So I got a couple of USB3 SSDs. Splurge! I connected them up to the Intense PC and started copying things over. I wondered how slow the original RAID was, and it turned out to be 50MB/s, which is very slow, indeed. With the new disks, I should get like, er, more! MORE! 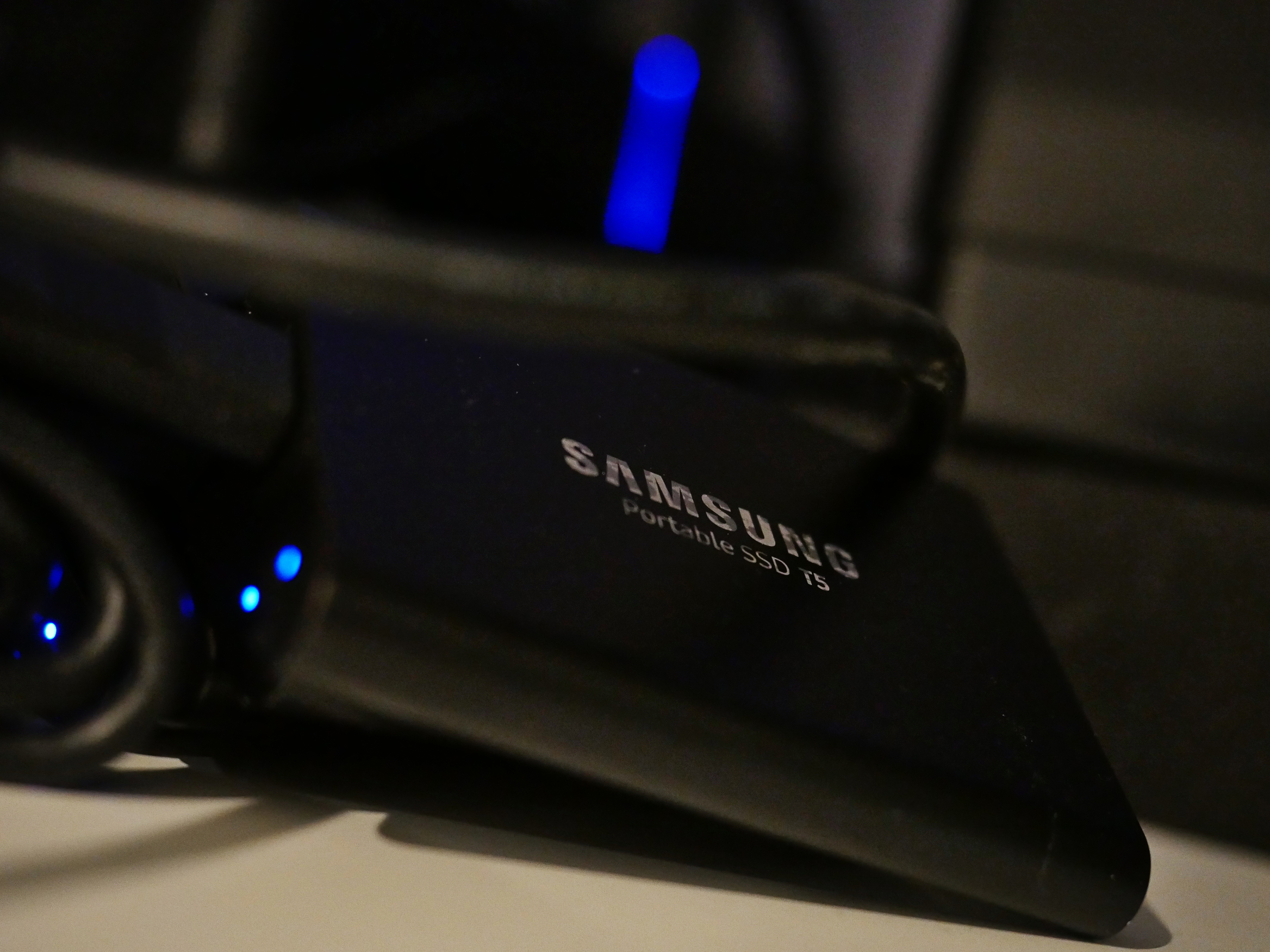 Copying finished, I did indeed get higher speed. 100MB/s. Which is pitiful. The native speed of the SSD should be 500MB/s, but given USB3, it should be slower, but not 20% of the speed.

So after much head-scratching, I noticed that the CPU was pegged to 100% whenever I read intensively from the disks. Is it possible that USB is such a crappy system that a 1.7GHz Xeon CPU from some years ago would be the bottleneck here? 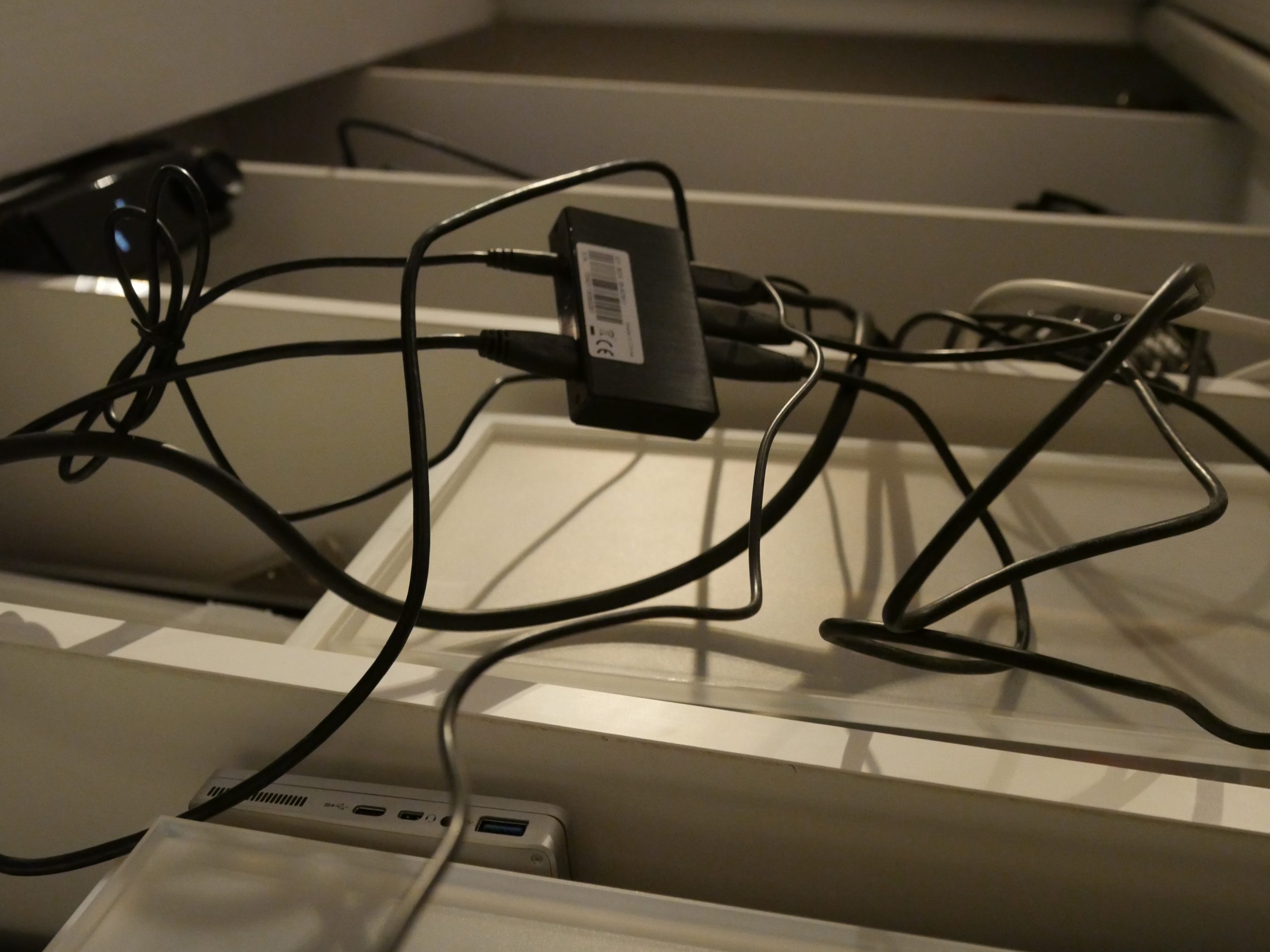 So I extended a USB3 cable to the other server I had in the same closet, which I had bought a month earlier to do the RAID for my film collection: 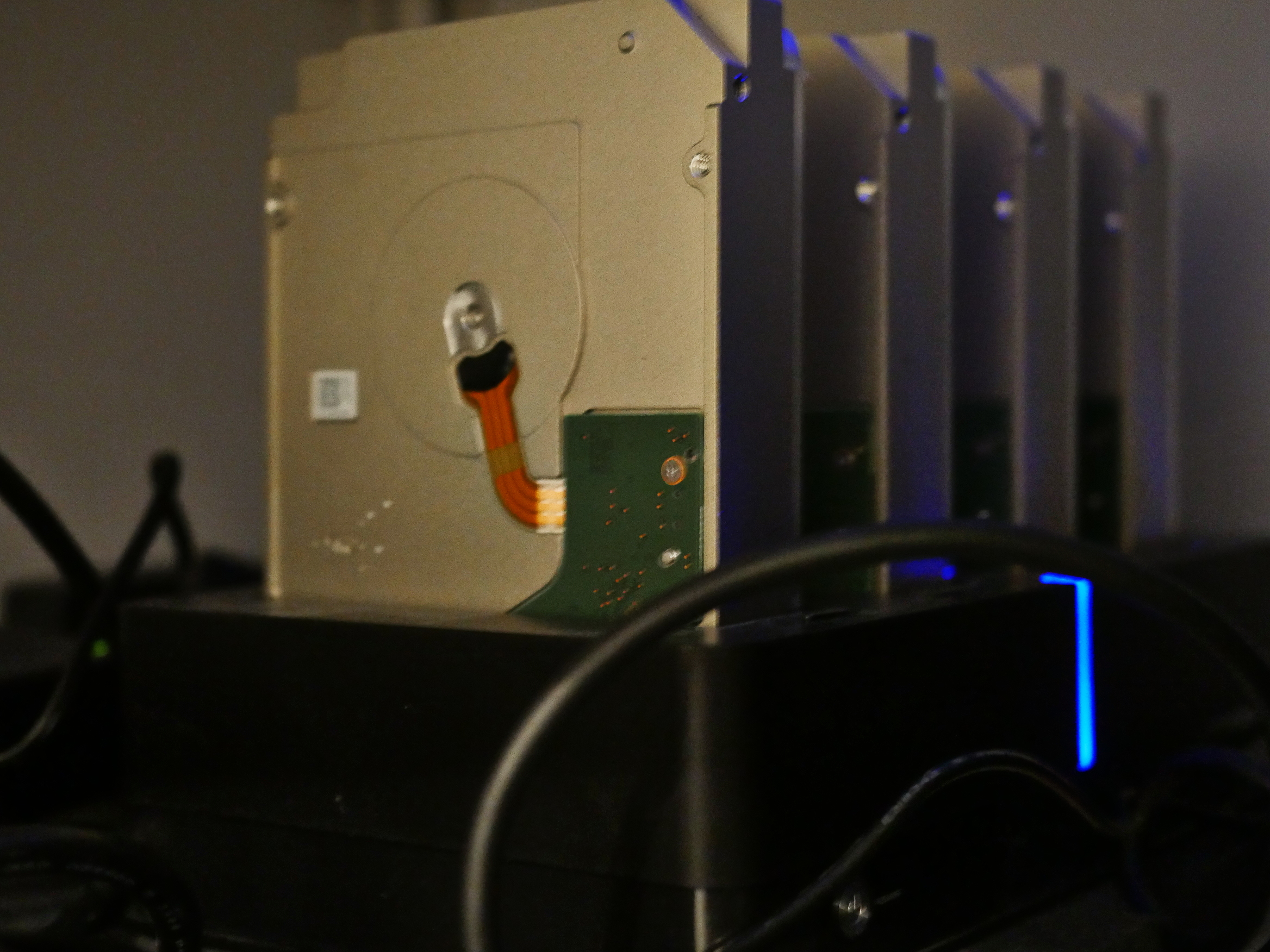 And… Wow! 320MB/s reading speed! 3x faster than the older machine, with the same SSDs, USB3 hub and everything.

I quickly rejuggled my setup and made that machine do the /music array, too, and sighed a breath of relief.

Now I can play music six times faster than before! Whoho! 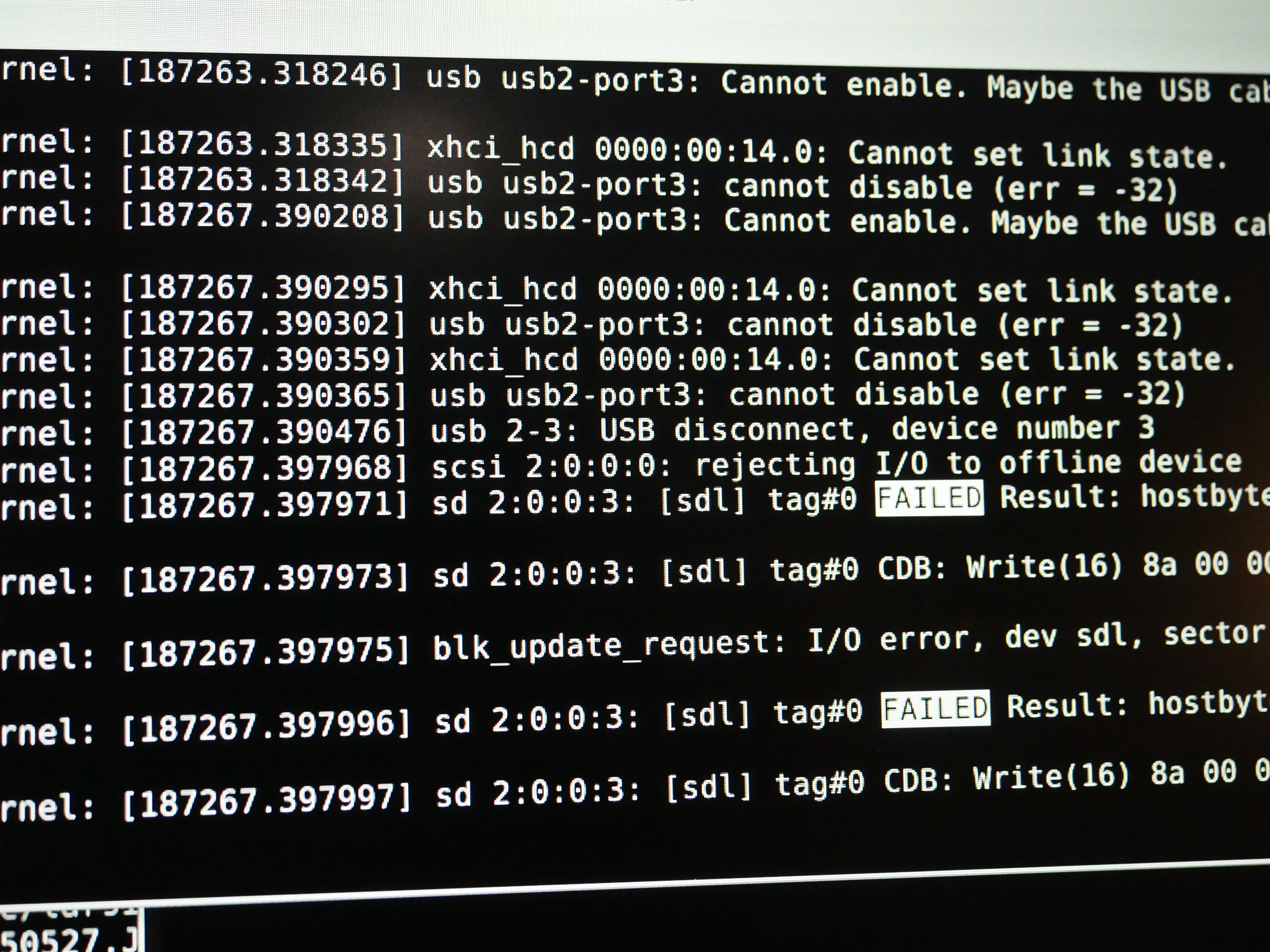 The RAID went AWOL, always with the same messages about “tag#0 FAILED”, “USB disconnect” and “I/O error” on various /dev/sdx-es.

I first suspected the USB3 hub, so I got a new one… A couple of days later, the same thing. Tried a different USB3 cable (it’s always the cable!); same thing.

Of course, after each time this happens I have to rebuild the RAID, things get inconsistent and stuff. 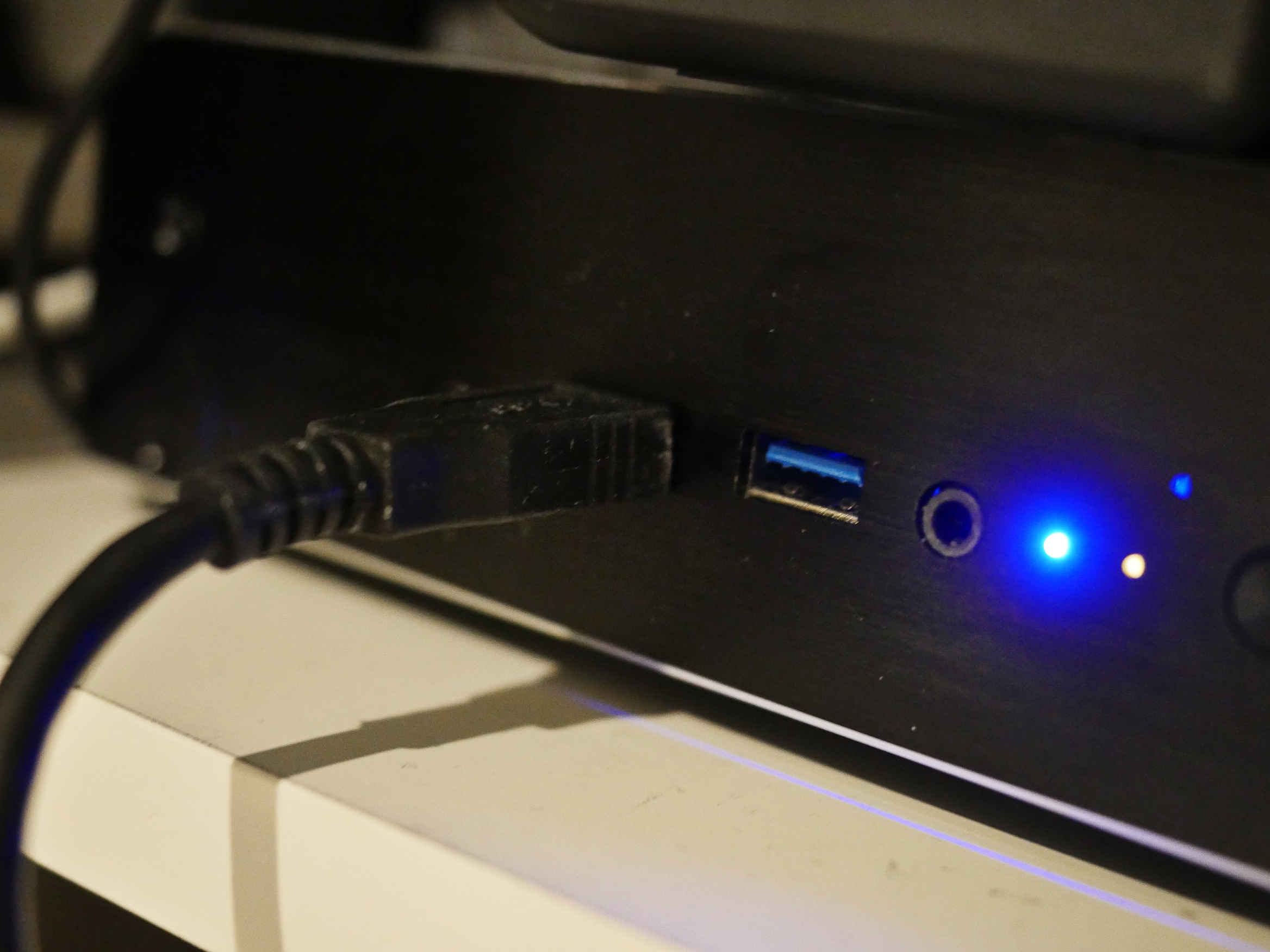 Finally, I move the USB from the port on the left there to the right…

So: The takeaway here is: 1) USB is a janky thing. It’s not quite like SCSI in olden days (no goat sacrifices needed), but it’s janky. 2) If your USB is slow, get a faster CPU.

The good thing about USB setups like this is that, in my experience, once you get them going satisfactorily, they’re pretty stable. Unless you do something crazy like insert a new USB device. Then all bets are off.

Of course, having a machine with room for plenty of SATA disks internally would be better, but I’ve never seen one that’s a) small and IV) allows easy access to disks that have failed and have to be replaced. 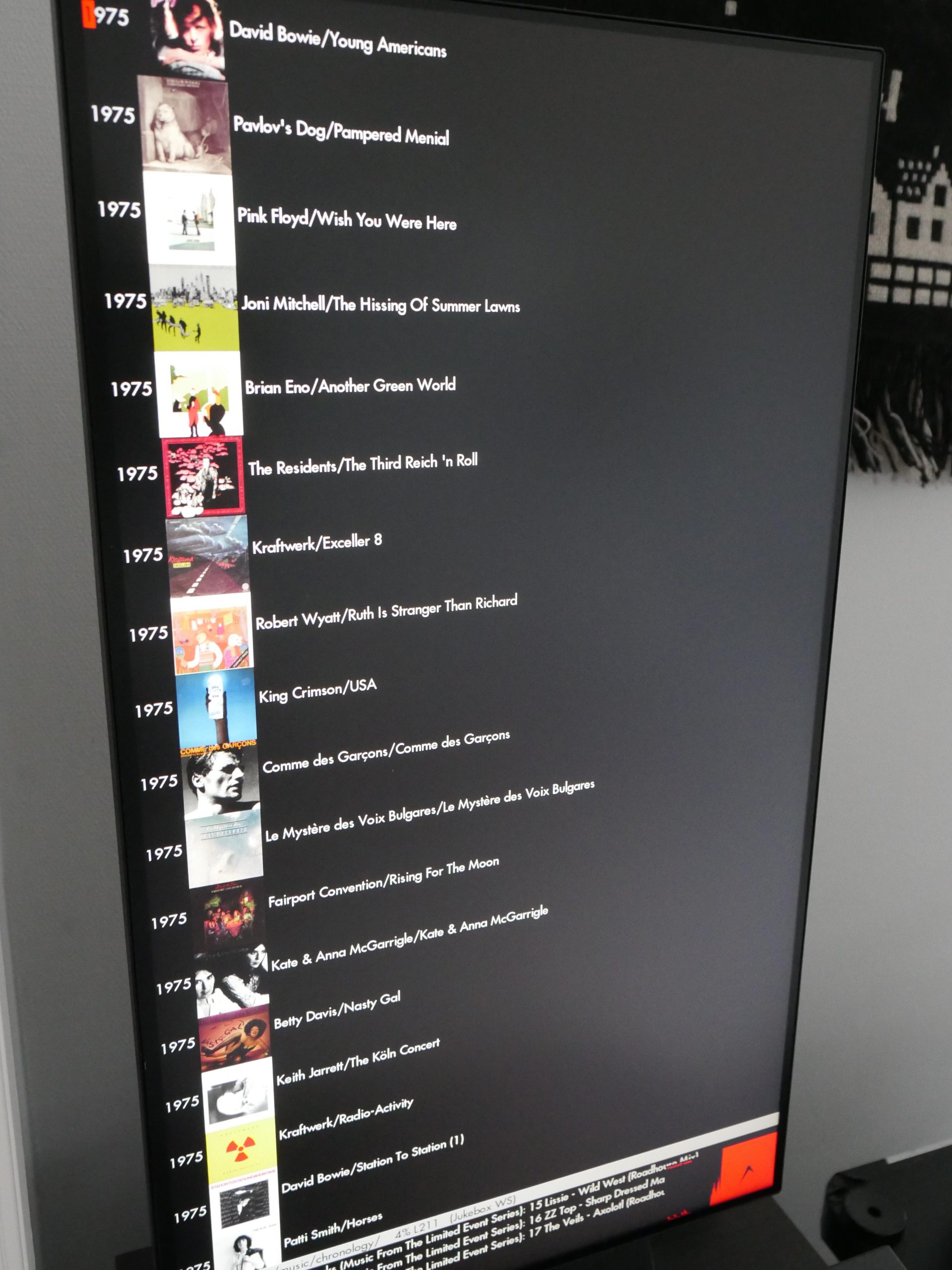 I can now display all the albums from 1975 by the snap of your fingers! If your fingers snap really slowly. But still!

And since the /dvd disks spin down automatically, my computer setup is now 100% without anything mechanical moving around normally, and I can walk past that closet without hearing any humming sounds.

Well, beyond my tinnitus, that is.

One thought on “Fast Music, or: USB Is Weird”