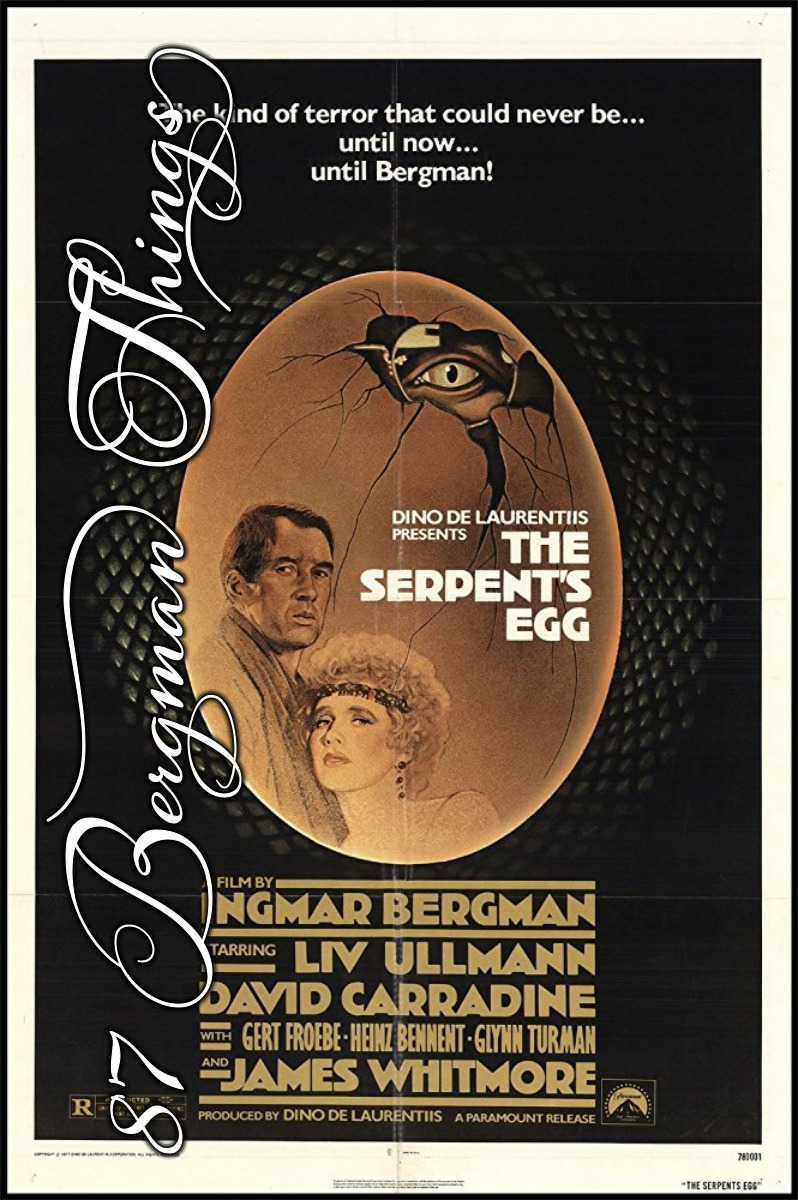 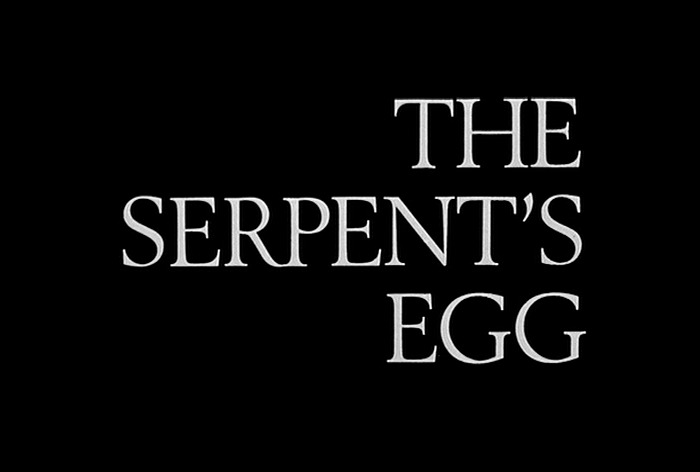 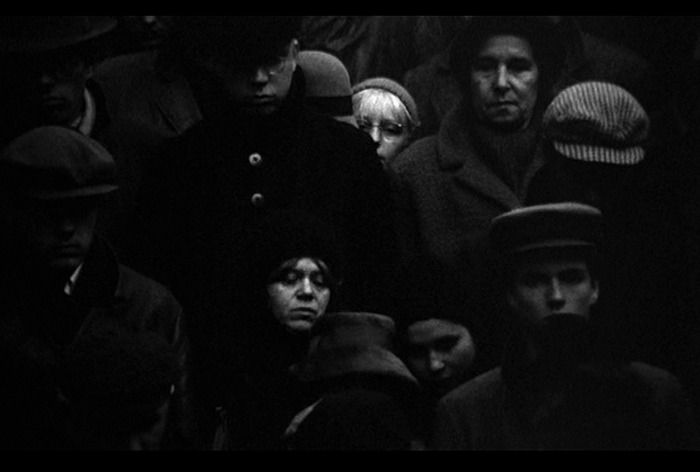 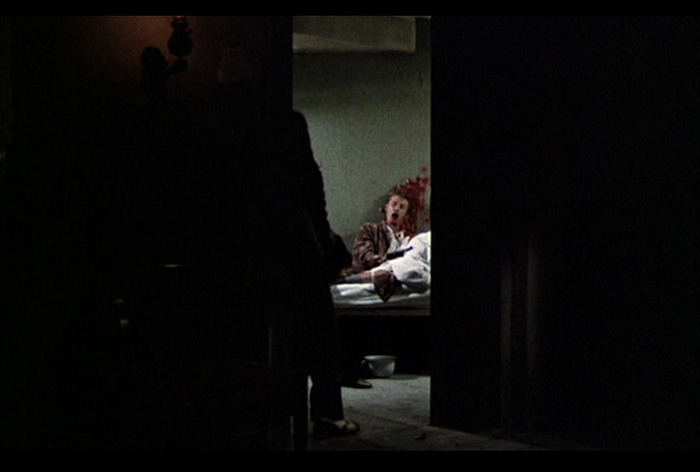 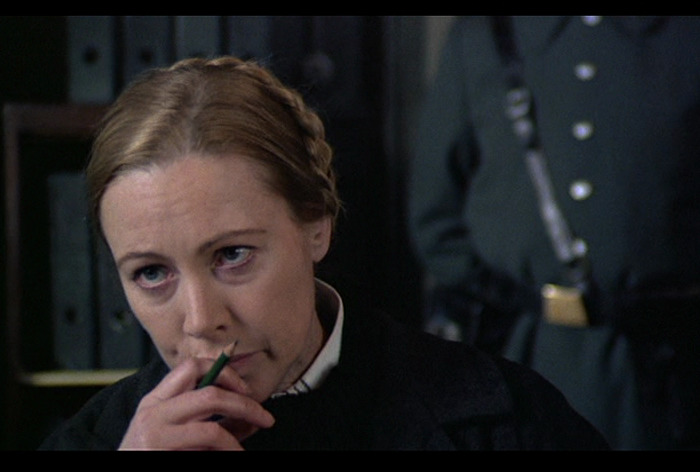 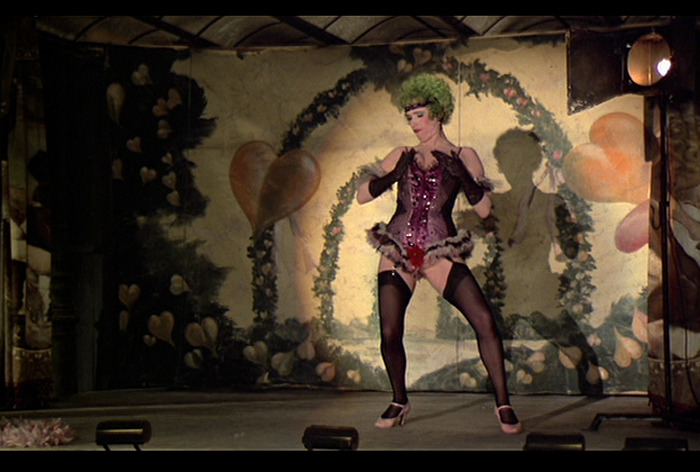 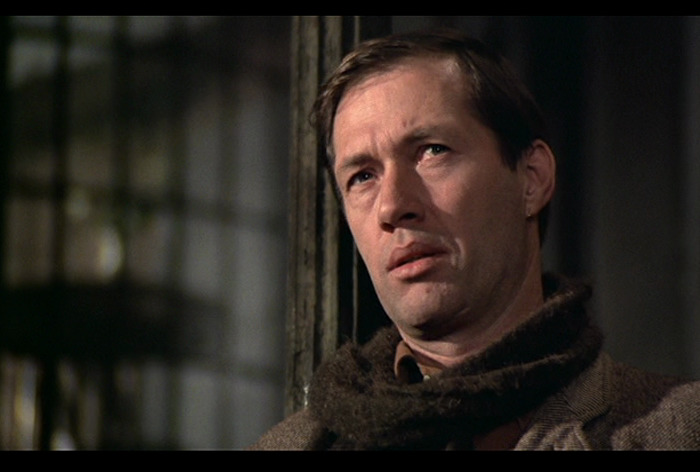 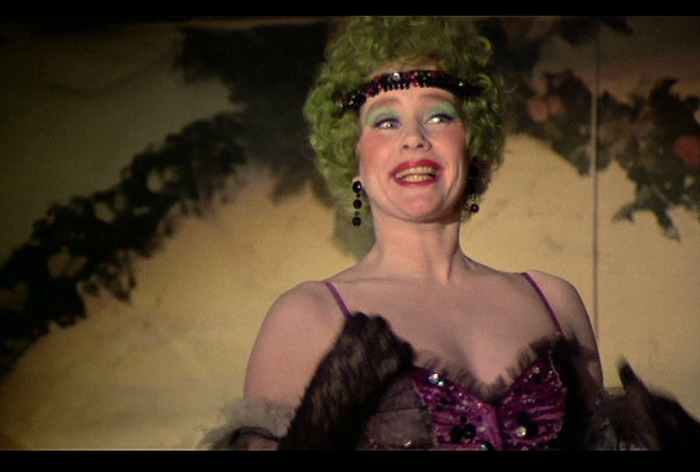 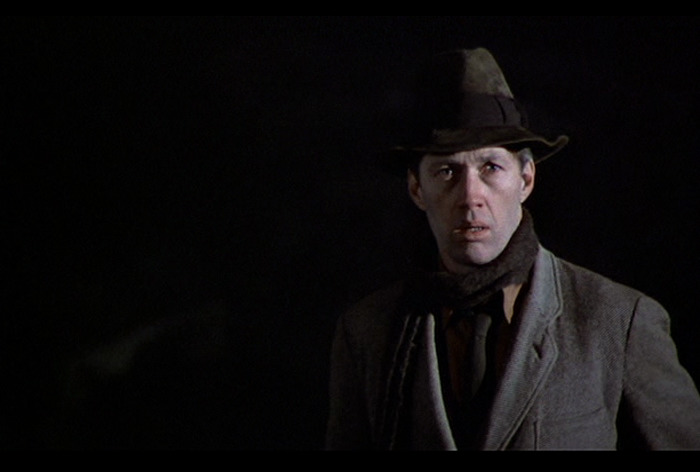 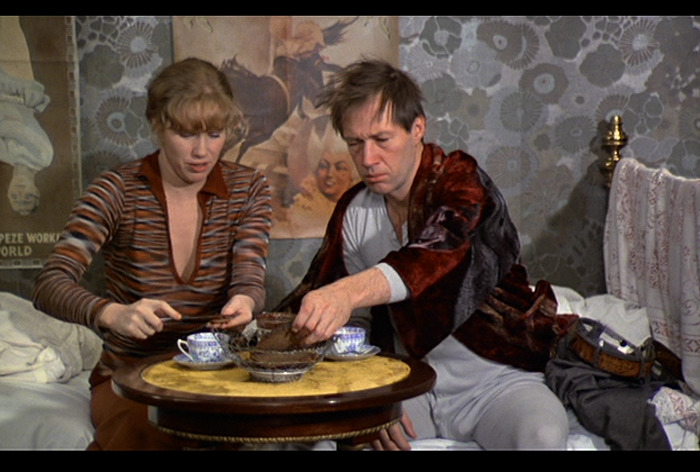 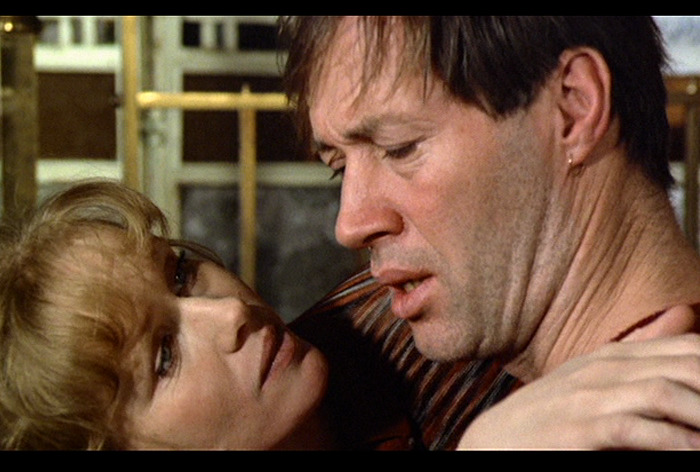 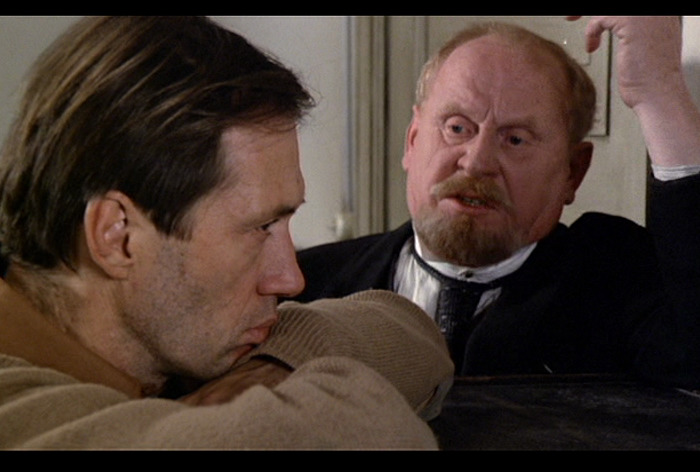 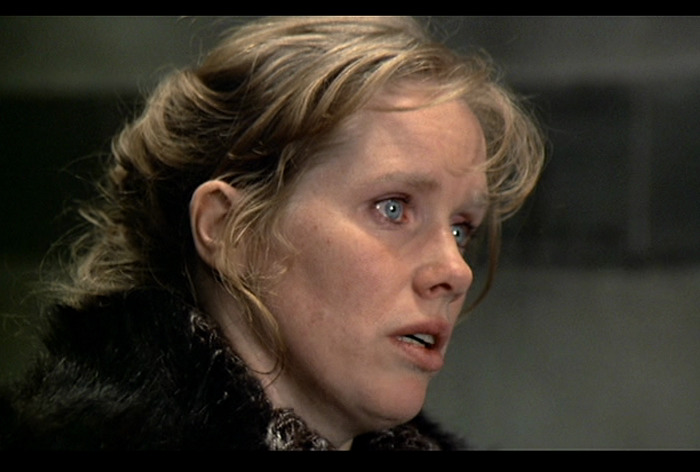 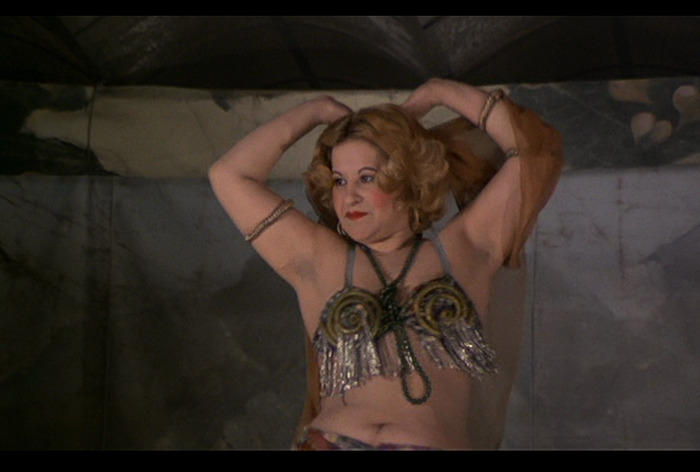 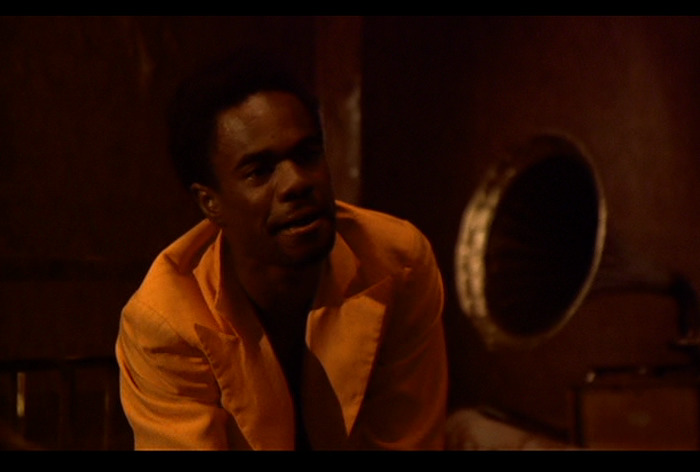 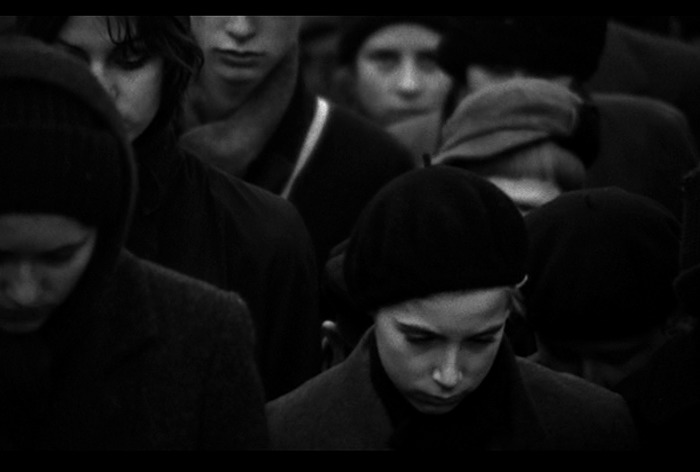 Hey! I watched this in 2014! And I’m not really looking forward to watching it again… but apparently I bought a new copy of the DVD for this blog series.

This is Bergman’s first film after he fled (sort of) Sweden after being accused of tax evasion. He got an enormous budget from Dino de Laurentiis again, and built a huge set in Berlin.

Bergman first tried to get Dustin Hoffman, then Robert Redford, then Peter Falk, then Richard Harris (!), and finally ended up with David Carradine as the male lead.

I think the Peter Falk version might have been kinda cool.

Anyway, since I’ve seen this one before not so long ago, I chose to watch it with David Carradine’s commentary audio track this time. He has amusing anecdotes to tell. “Well! What faces are we going to make today!” Bergman apparently told him one day, which I can totally understand. “The only piece of direction he ever game me was ‘Perhaps you’re doing too much.'” Which, I guess, means that he never read Bergman’s Images:

The minute the lights in the theater went out, Carradine fell asleep, snoring loudly. When he woke up I had no chance to discuss his role with him. Carradine’s behavior repeated itself during the filming. He was right owl and kept falling asleep on the set. He was found slumped just about everywhere, sound asleep. At the same time he was hard-working, punctual, and well prepared.

Carradine corroborates this in the commentary track without knowing: He says that he was out every night partying, and living his own life with his family that had come over, with a son that got up at six in the evening, so they stayed up all night.

But Carradine says that Bergman kept him isolated on purpose, to get him to fit his role better as a foreigner in Germany (which is shades of Gunnar Björnstrand accusing Bergman of deliberately making him believe that he (Björnstrand, that is) was deathly ill during the production of Winter Light so that he’d play the part of the sick priest more, er, sickly).

Carradine goes one further and claims that Bergman made the German authorities not approve his (Carradine’s, that is) marriage until the last day of production. To keep Carradine alienated.

Bergman: Criminal Mastermind, or Actors: The Things They’ll Believe, Eh? You be the judge.

Carradine says many an amusing thing, like: “So many people have called me an instinctive actor.” I’m sure! But that’s apparently not true, because he analyses his every single pose. I wouldn’t have thunk!

“God I was pretty there.”

At one point Carradine says the he asked Bergman “aren’t you worried about your soul?” and Bergman didn’t understand the concept and said “I’m an old whore”, which wasn’t what Carradine meant. (I guess Carradine is Christian or something?) Bergman also gave Carradine a hard time for being a vegetarian and made him start smoking, allegedly.

“One of the things about Ingmar is that there’s a great cynicism. I think he feels above most human problems and most human beings. And I think there’s a very great possibility for him to be a very cruel person as a result of that. And you know, he’s actually very kind.” “He just decided to be kind instead to avoid his nature.”

“I have a feeling that the only reason he made this movie […] was because he wanted to get together with Liv. And the only way he could do that was to make a movie and put her in it. And of all the ladies he had worked with, he was the fondest of her. And he was more fond of her performances than he was of Harriet’s or Bibi’s.”

“Ingmar is the kind of person who always wanted to be an old man.”

Somebody should make a complete transcript: “Carradine on Bergman”.

It’s really fun getting an American perspective on Bergman. Like in “tee hee”.

Anyway, Liv Ullmann is pretty good here, but she really has nothing to work with here. It’s a mess. And Carradine is miscast.