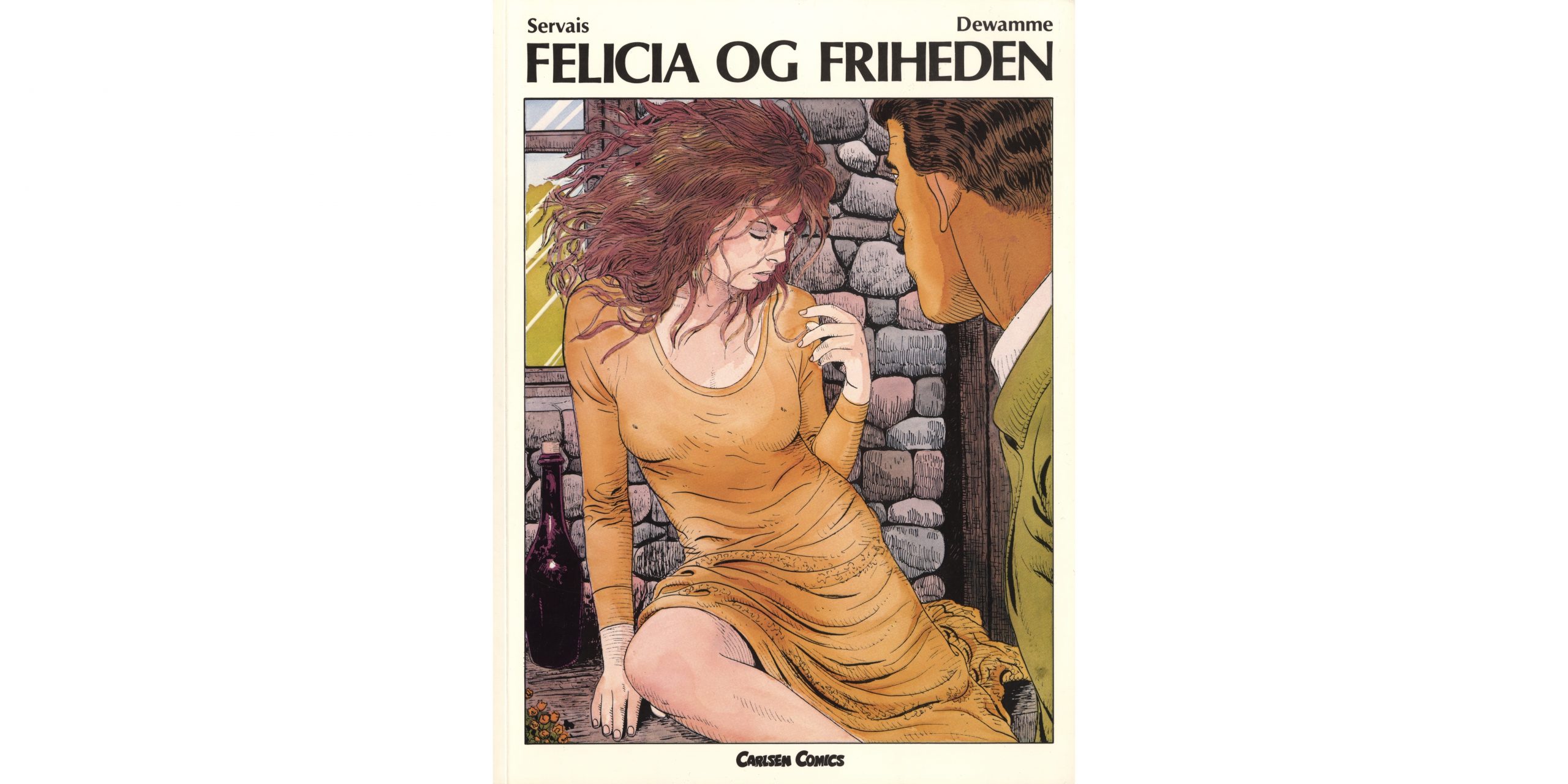 Both Jean-Claude Servais (the artist) and Gérard Dewamme (the writer) are Belgian, which makes a first for this week’s little trip through Franco-Belgian comics, I think? All the other ones have been French. Very French.

These stories were originally serialised in the Belgian (À suivre) magazine. 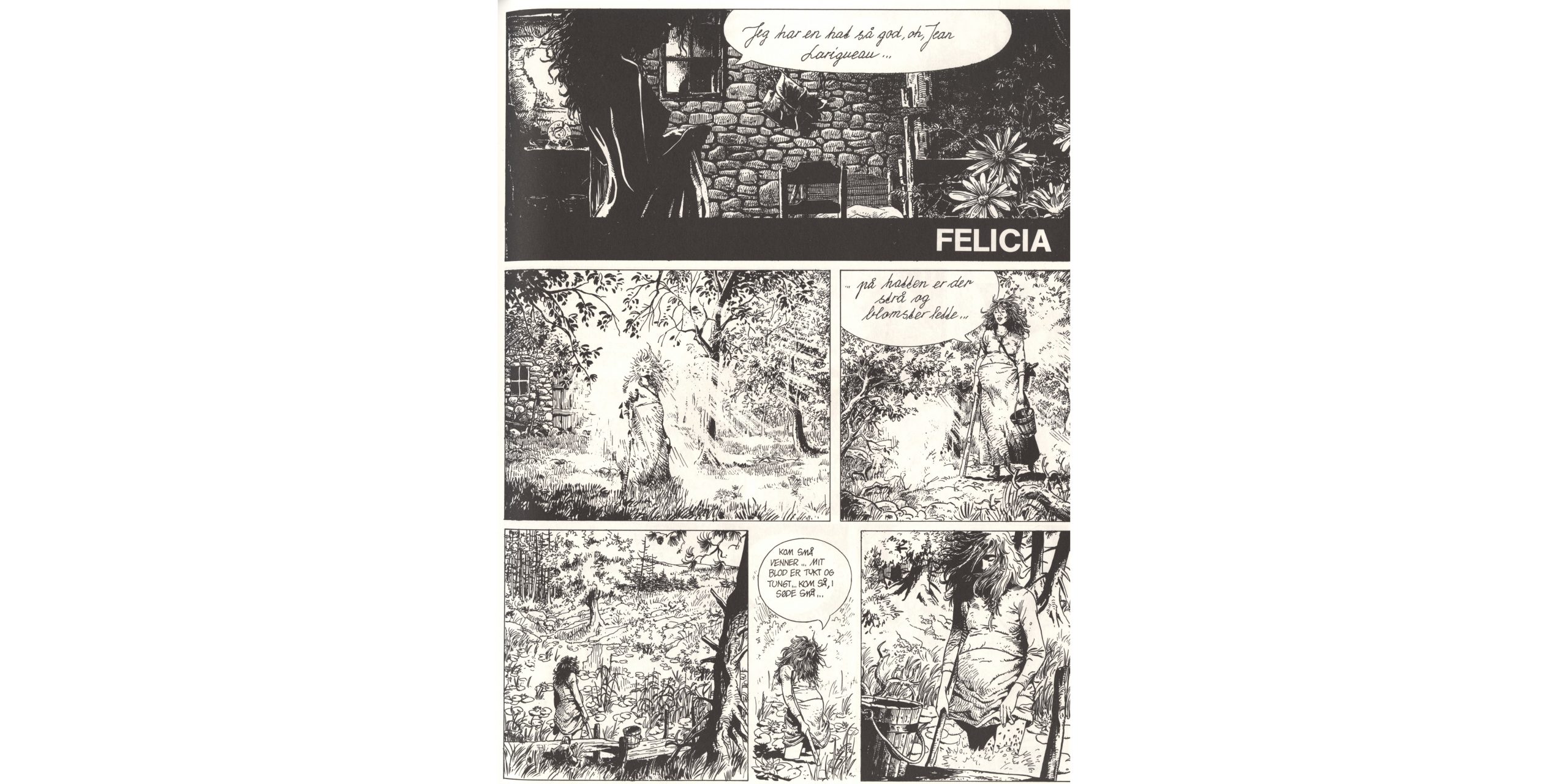 I’m not sure whether I’d term this a very Belgian comic (after all, no big noses), but it’s certainly a pastoral series. The forest is a tangible presence throughout, as well as the seasons, foraging for food and hunting for bunny rabbits. (As well as catching leeches in this very efficient manner, later to be sold to the apothecary. (When did they stop using leeching in Belgium, anyway?))

Our heroine throughout the three albums is Felicia, who we can see wandering through the forest: A woman of nature. The Danish name for this album is “Felicia and Liberty”, or something. Freedom is what’s important for her, and she shuns convention and all those nasty things that follow from being tied down.

The vast majority of women who appear throughout the pages are like the sour-faced biddies to the left, while the men are mostly gregarious and fun-loving. 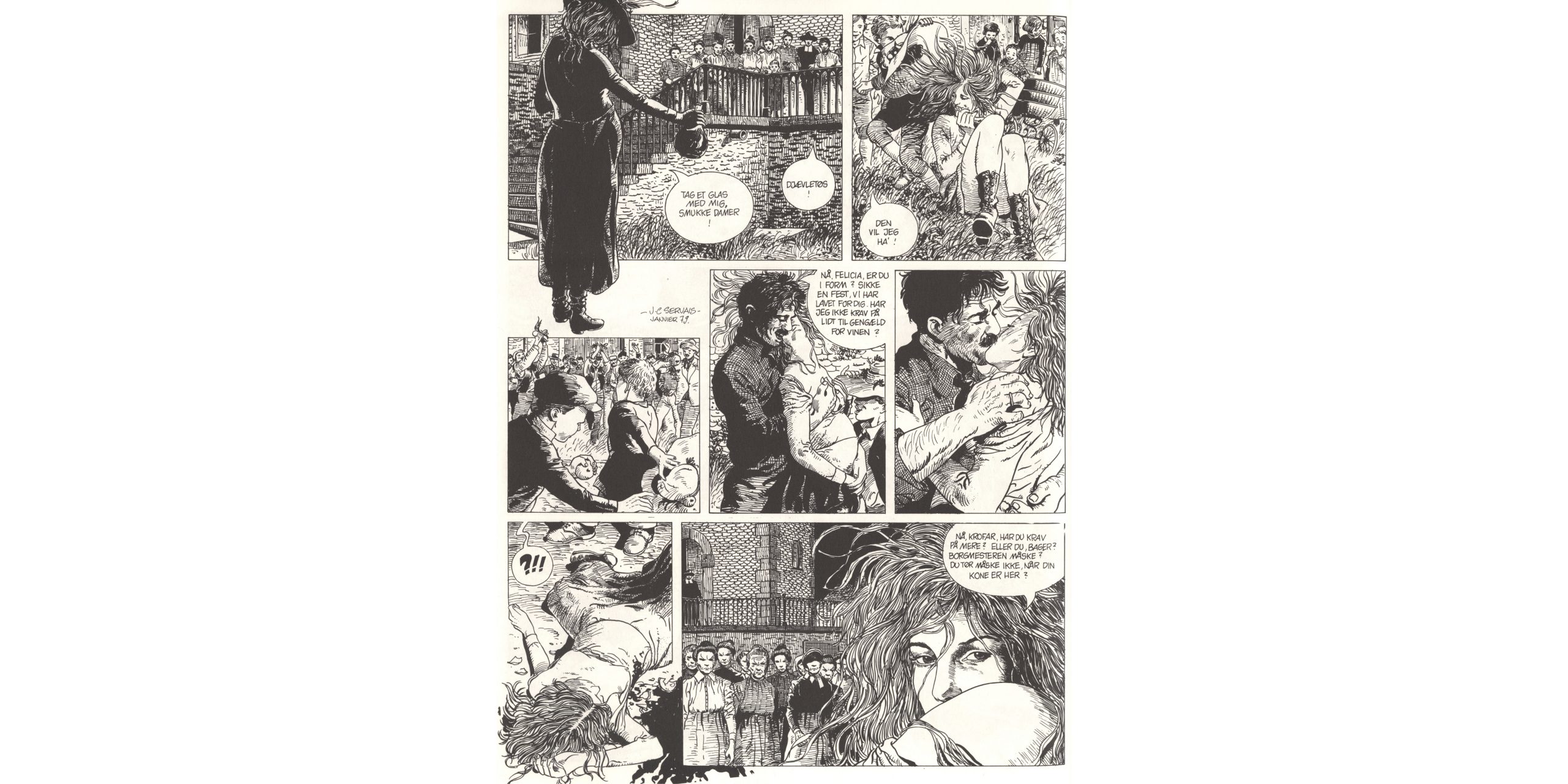 And then things shift suddenly without… much reason, other than melodrama. Servais’ artwork can sometimes be difficult to read: It’s not clear why she’s suddenly on the ground, and it’s not clear why the villagers then decide to throw this very pregnant woman into a lake. (Spoilers: She survives, the baby doesn’t.) 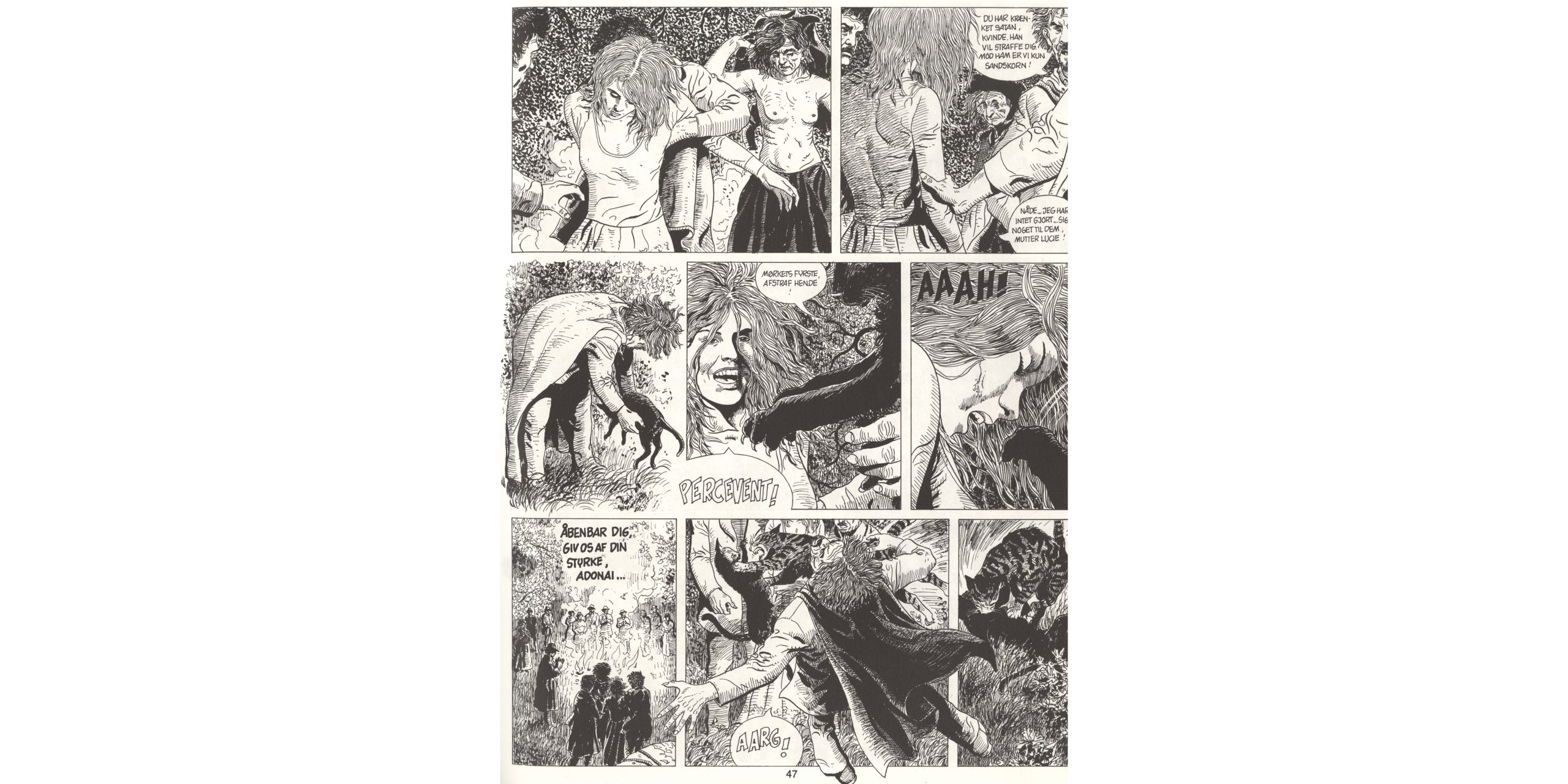 The first book is a series of short stories, one more melodramatic than the other. The above is from when she tried to join a coven, but then she… stumbled while offering the blood to Satan… which made them angry… and the cat attacks her… but her own cat comes to her rescue…

In another story, she loses her memory (after getting hit over the head and then gets raped) and is then sold by the police (?) to an abbey (!?) to work as a slave (!?!). 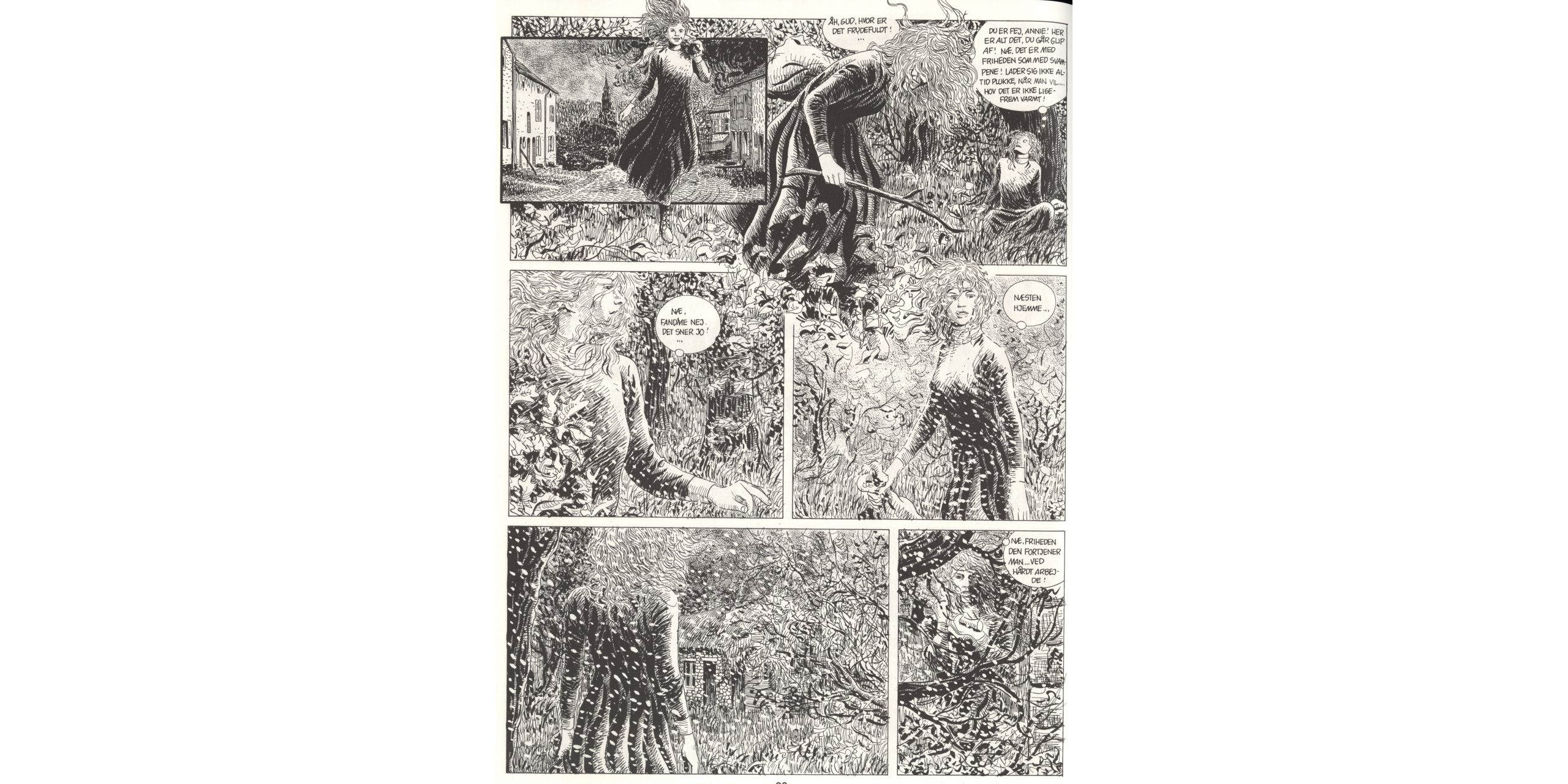 But still, you can’t deny the power of some of these pages. Servais’ detailed artwork with these almost traditional layouts: He has a tendency to make Felicia stick out of the panels, and going “full bleed” out into the margins of the book. (Quite unusual for its time.)

Felicia is constantly breaking through the confines of these, frankly, extremely silly and somewhat tedious stories. 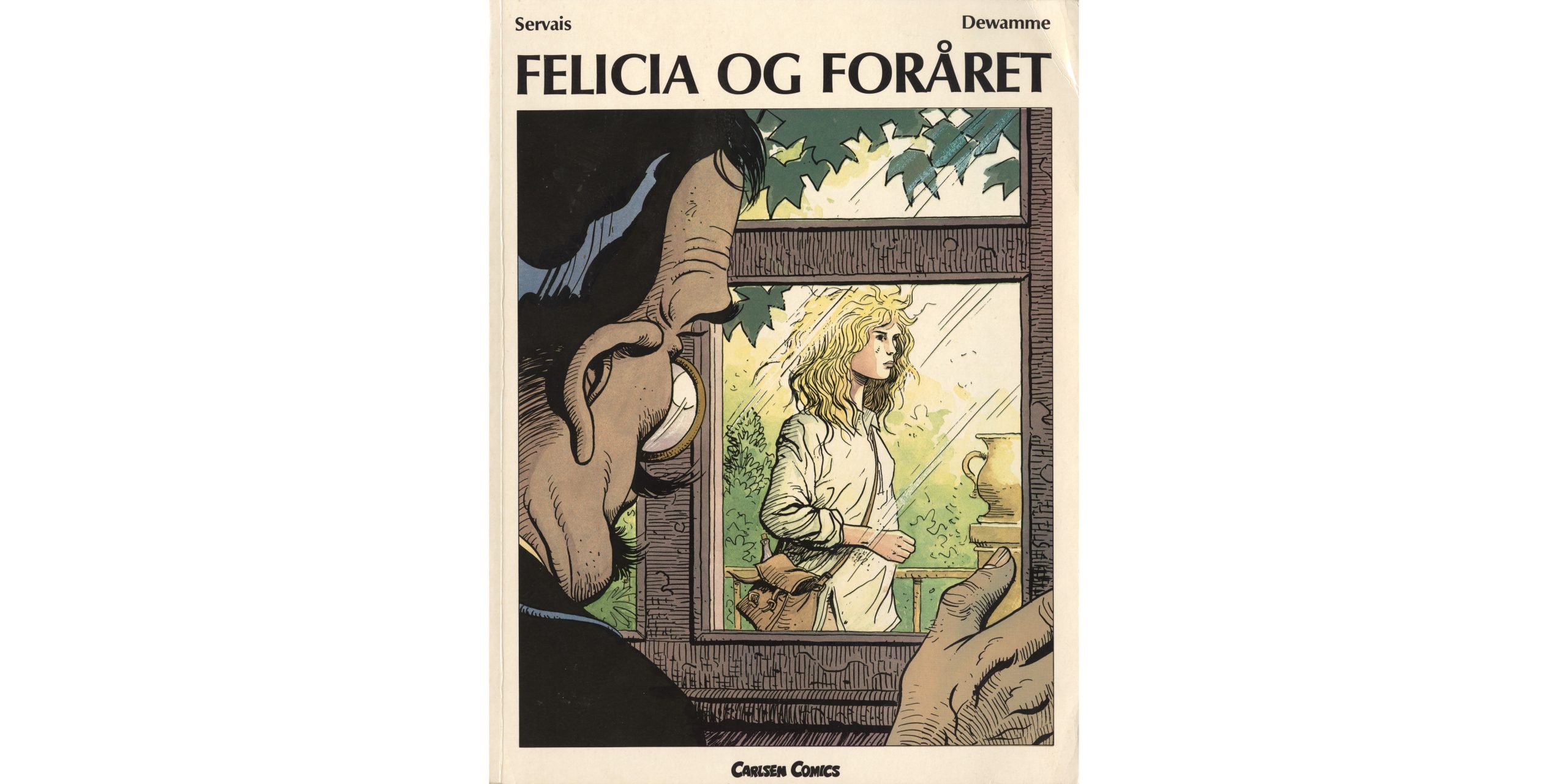 I only bought the first of these albums as a teenager (presumably because I didn’t think Servais made interesting comics), but I got the next two albums now, because I was curious as to whether there’s be any development. 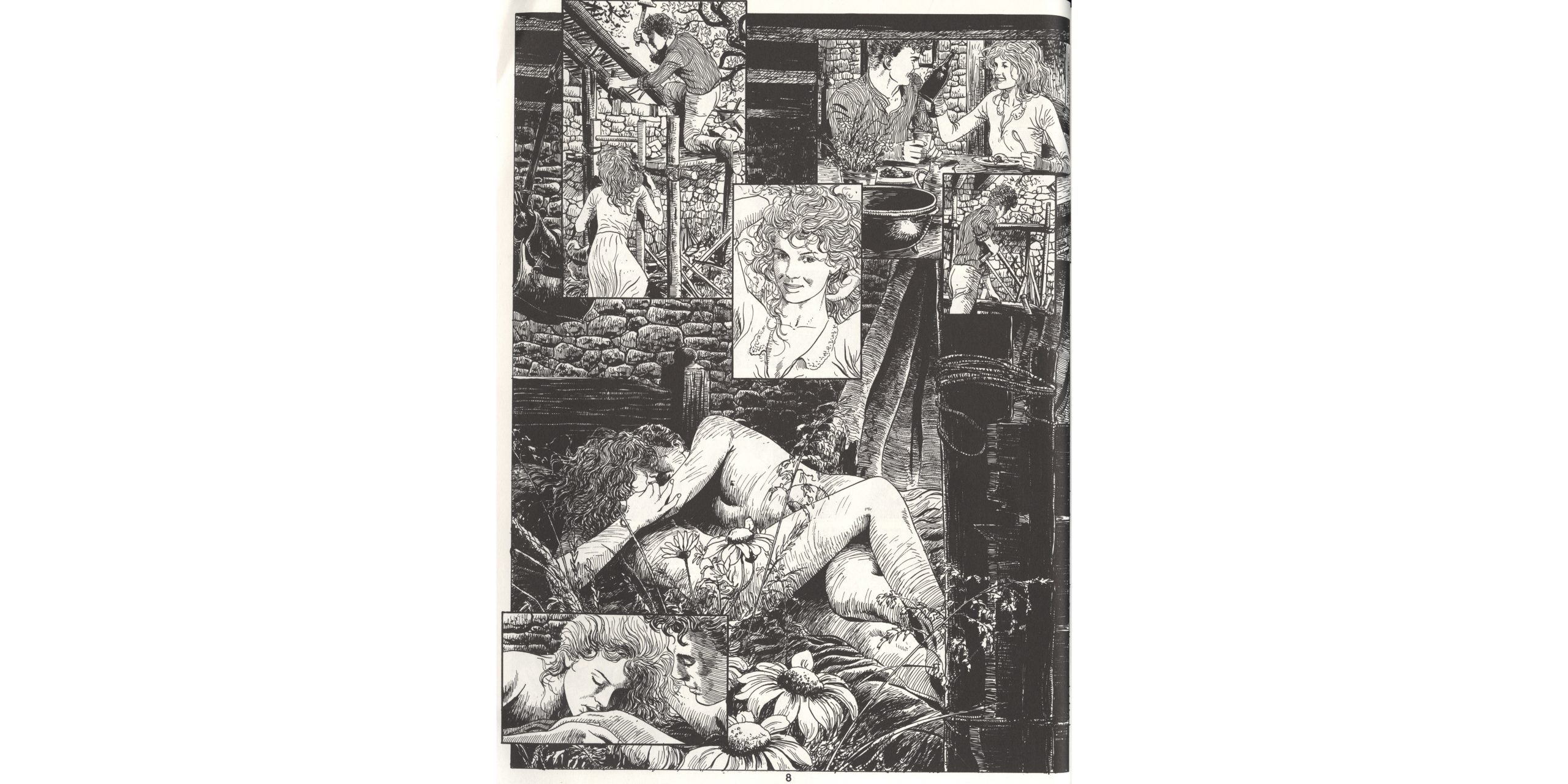 Indeed, the artwork seems to get even richer than in the first one. But using a “love montage”? It’s so cinematic, and I don’t mean that in a good way.

As for the story… Instead of being a bunch of (literally literally) unbelievable stories, there’s just one story that’s so monumentally moronic that I’m not going to bother writing anything about it.

Guess whether the dwarf up there is evil or not. 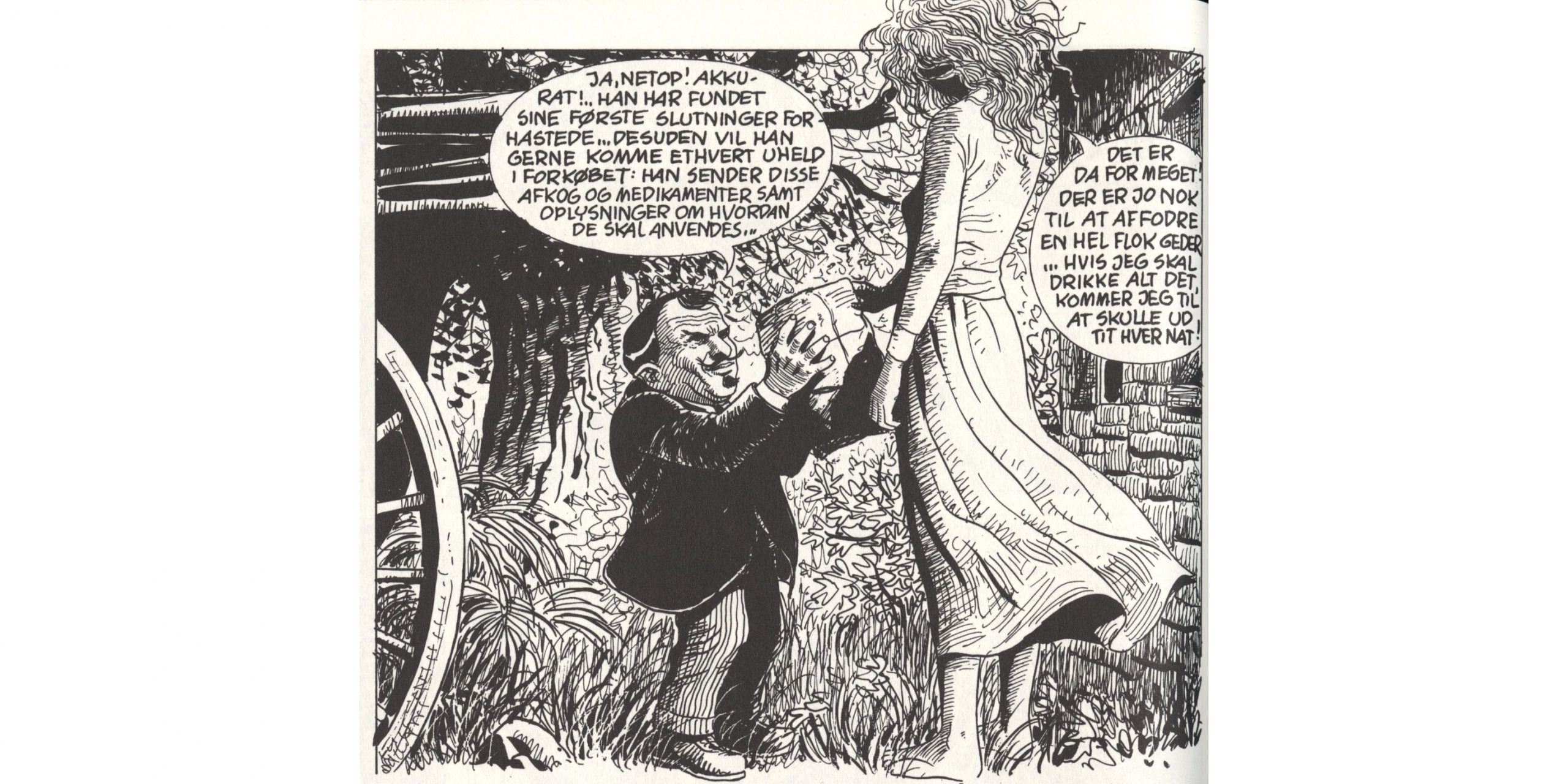 As in the first album, the pleasures here are from Servais’ artwork. As usual, Felicia is poking out of the panels all the time, but it’s especially effective in panels like this to emphasise their difference in heights. 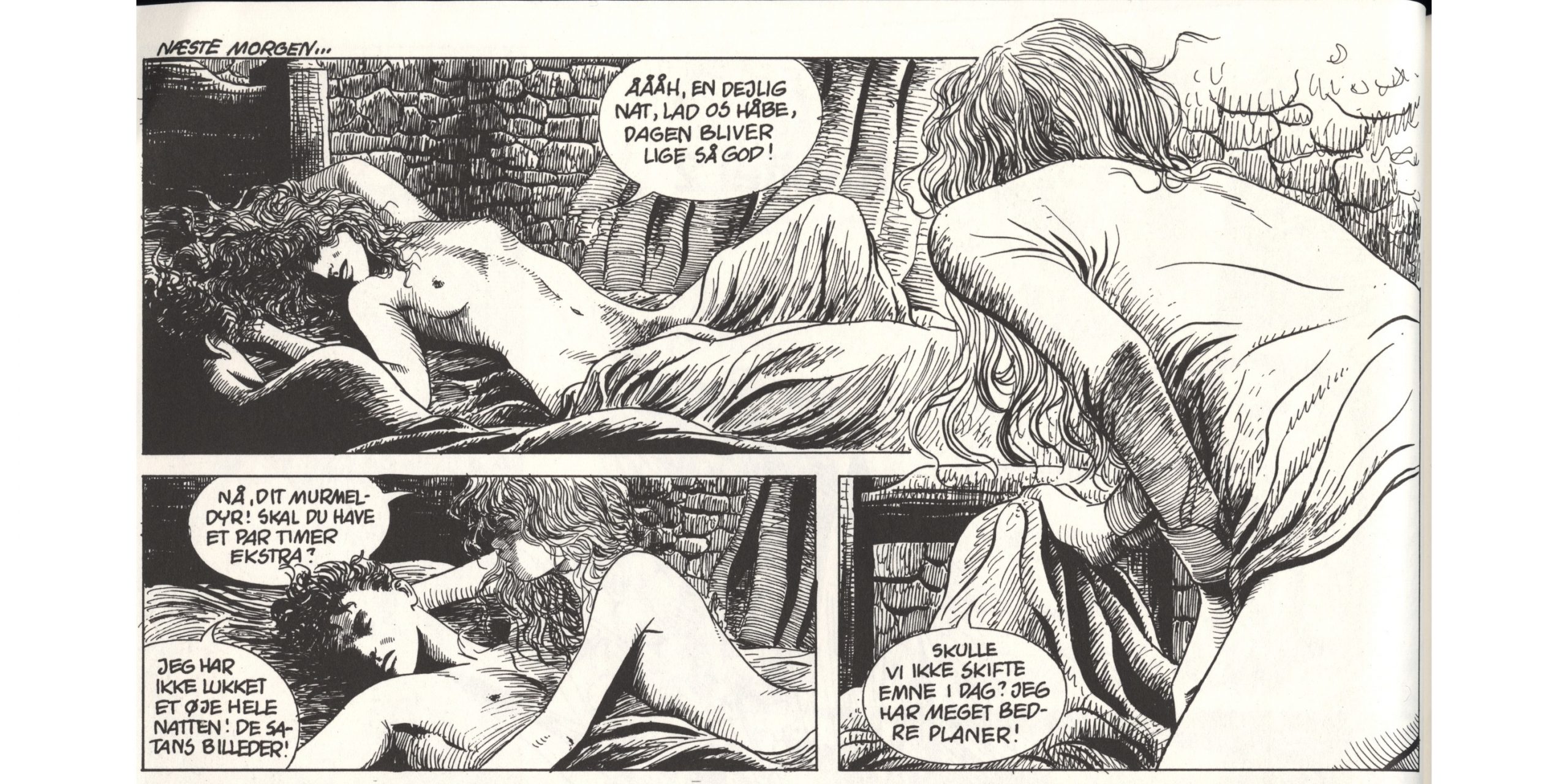 Other pages look a bit like Servais has been studying Milo Manara’s layouts a bit too closely. 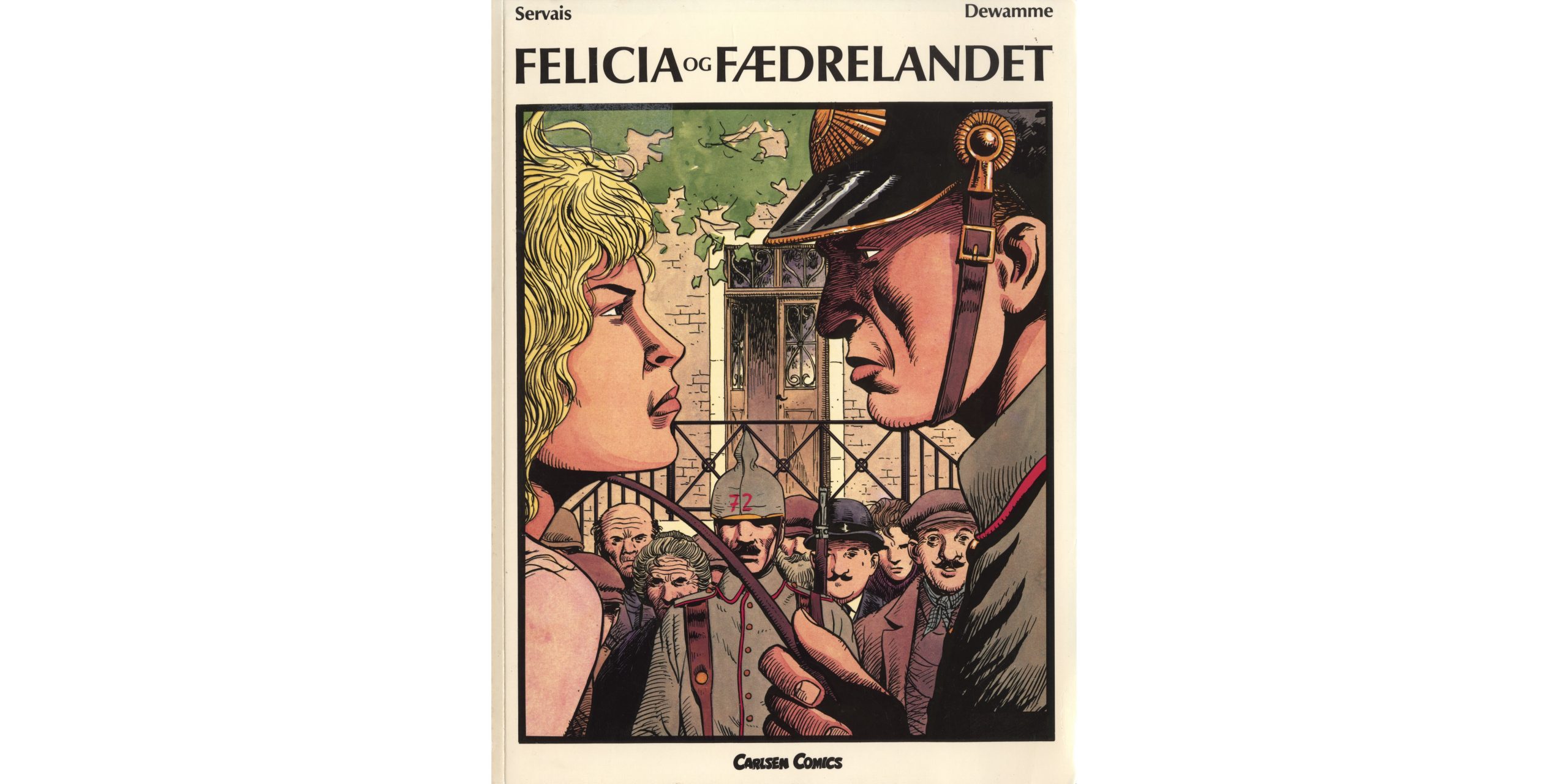 And then the Huns attack! 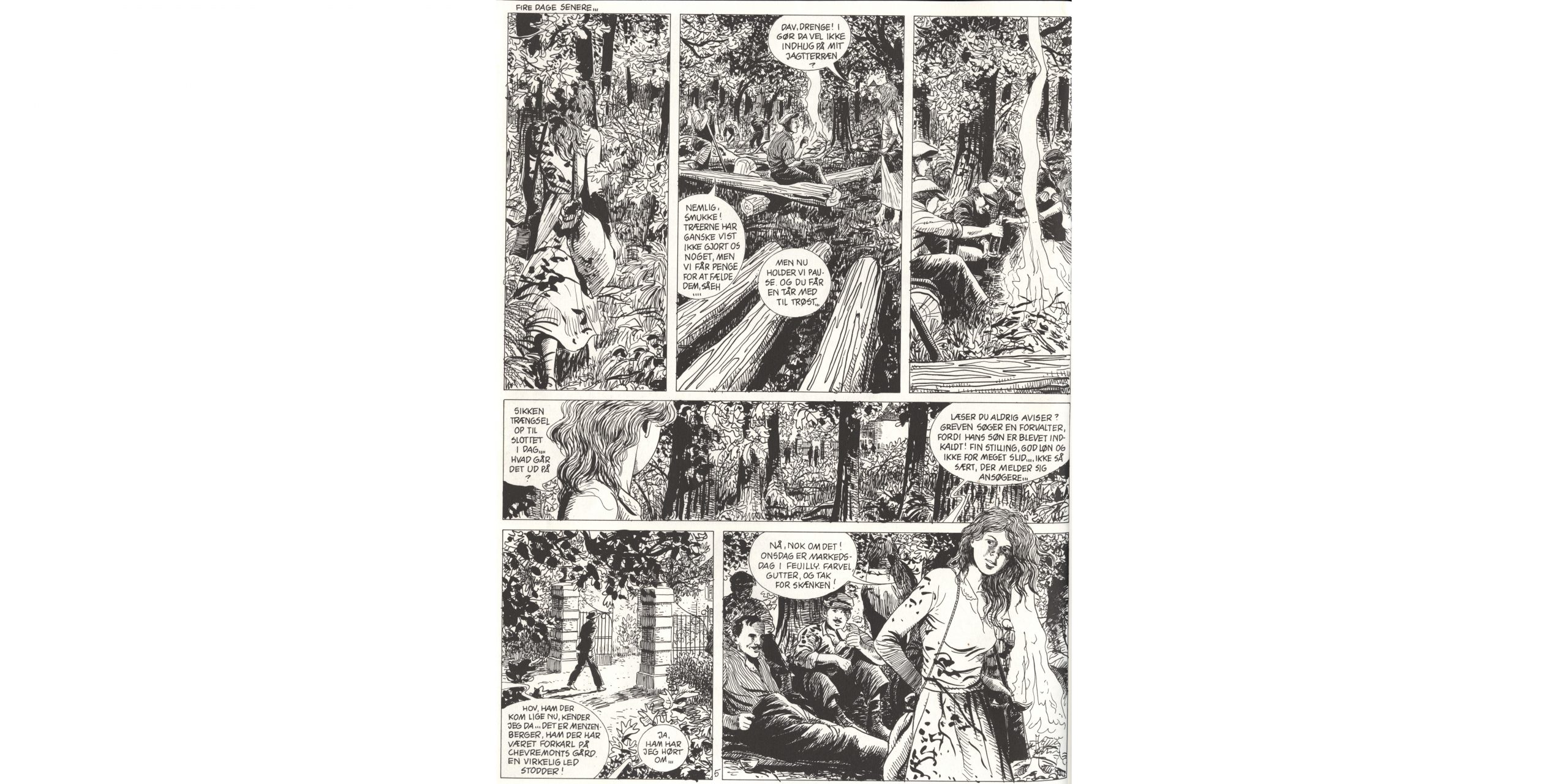 I read this book an hour ago, and I’ve already suppressed what it’s about… Uhm… Let’s see… While I’m thinking, just ponder the cosy scene in the forest above. 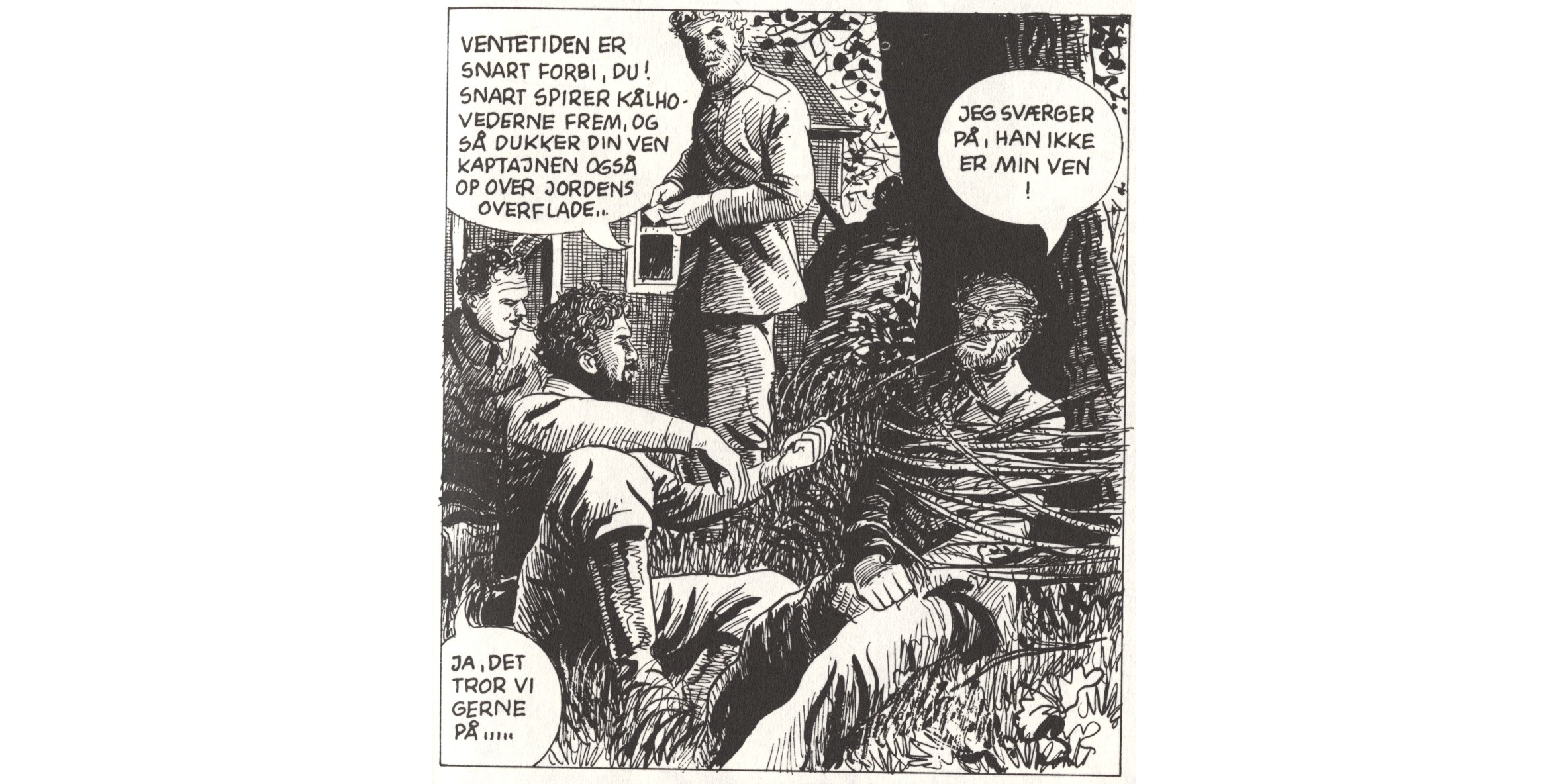 Oh, yeah, there was treason and revolt and stuff. Yeah. Nothing important, but note the excellent binding technique the French resistance uses for this traitor. And since they apparently had him tied up for several weeks, they presumably had to untie and tie him up again several times a day.

This series was republished in the naughts in an expanded version (in France), and in colour. These three albums became tomes 2-4, and new tomes 1 and 5-7 were added. Fortunately, these haven’t been translated to any language I read, so I’m able to resist the compulsion to get them, too.

Servais has published a large number of works over the years, and about half a dozen more have been translated to Danish. I wonder whether they have less groan-worthy plots than these Dewamme-written ones…

One thought on “BD80: Tendre Violette”