I’ve had the same monitor in my stereo control system for many years. It’s a 20″ Dell that’s OK. 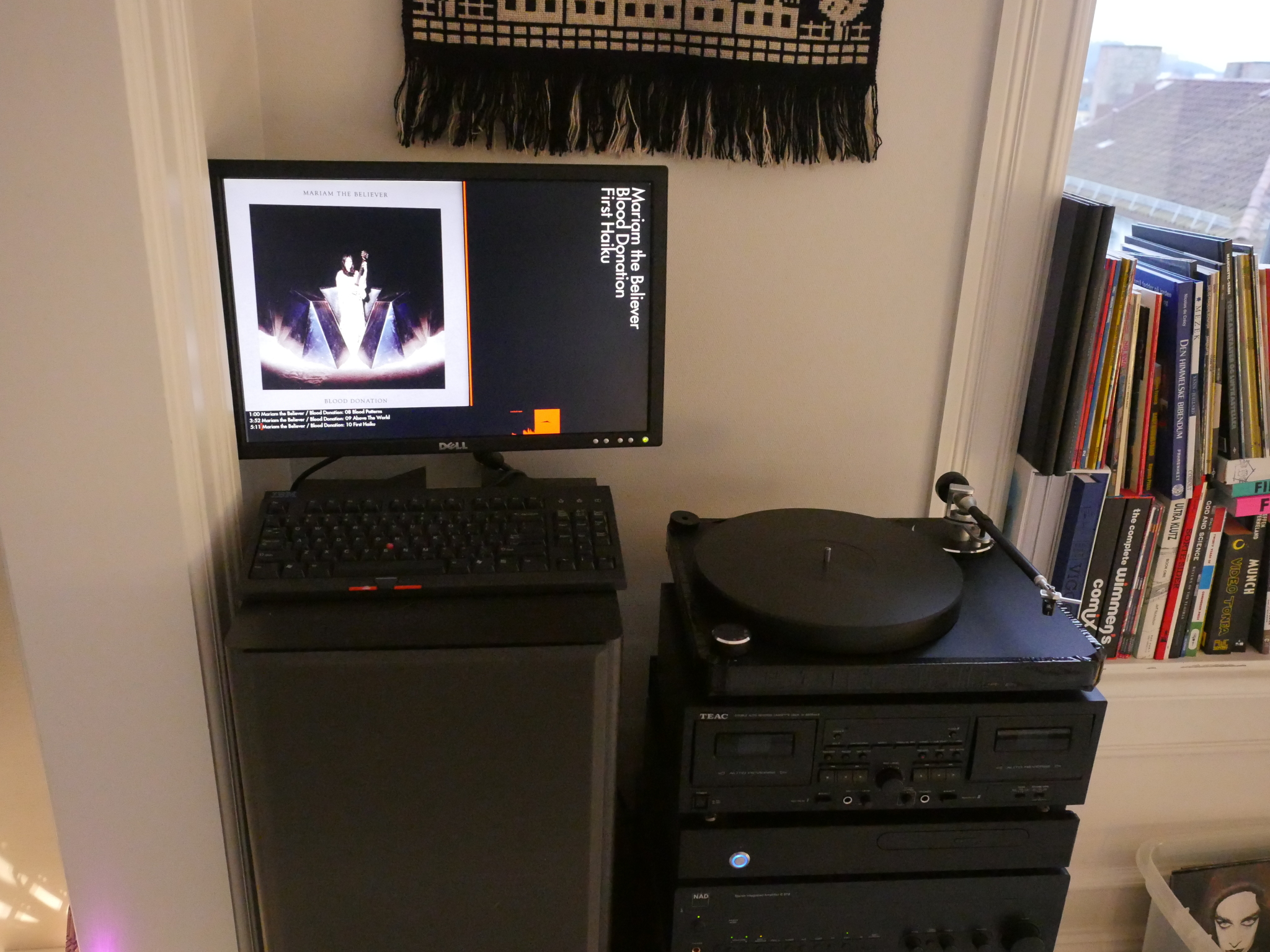 It’s got an appropriate size for the living room. But lately it’s started having a high-pitched whine. If I play only punk music I can’t hear it at all, but otherwise it’s slightly annoying.

So I went looking for a new monitor. I thought it might be nice to have a rotated monitor this time: Higher than wide so that I can display the name of the currently playing artist un-sideways. 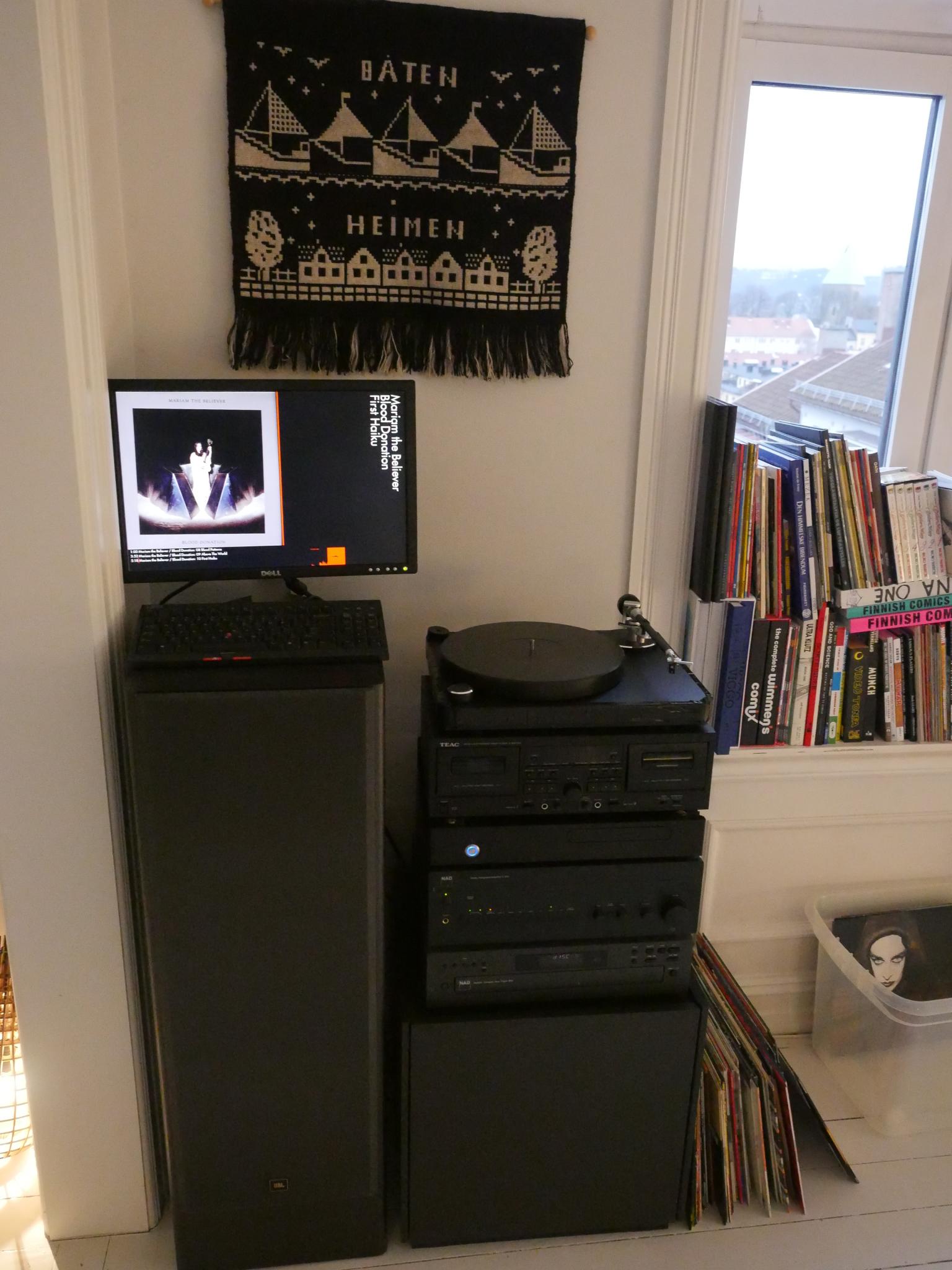 So my specs here were: No logos, and no bezels wider on any sides, and as small as possible. The logo/bezel thing because inevitably that looks weird when rotated, and this is in the living room. Looking pretty is nice. 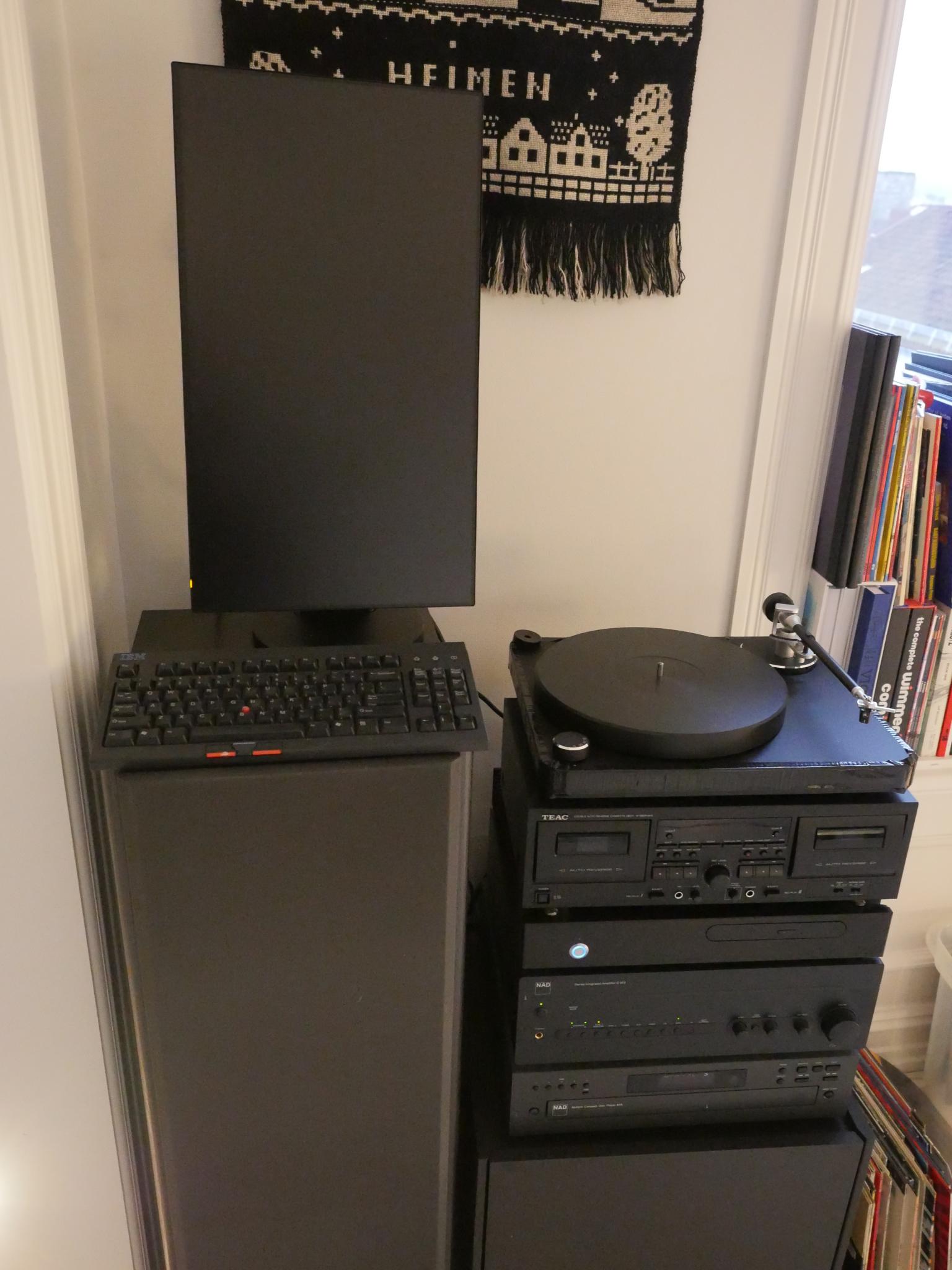 Behold! After searching for hours, there was one (1) monitor that fit the specs, and it’s this 24″ NEC EX241UN. It’s got very narrow bezels and no logos and nothing ugly. So it’s just like a matte obelisk.

But my stereo computer machine is oooold. It’s based on a 2GHz Pentium M 32-bit CPU. I think I bought it in 2005, possibly? You can see it underneath the cassette player up there… It’s in a Hush enclosure. 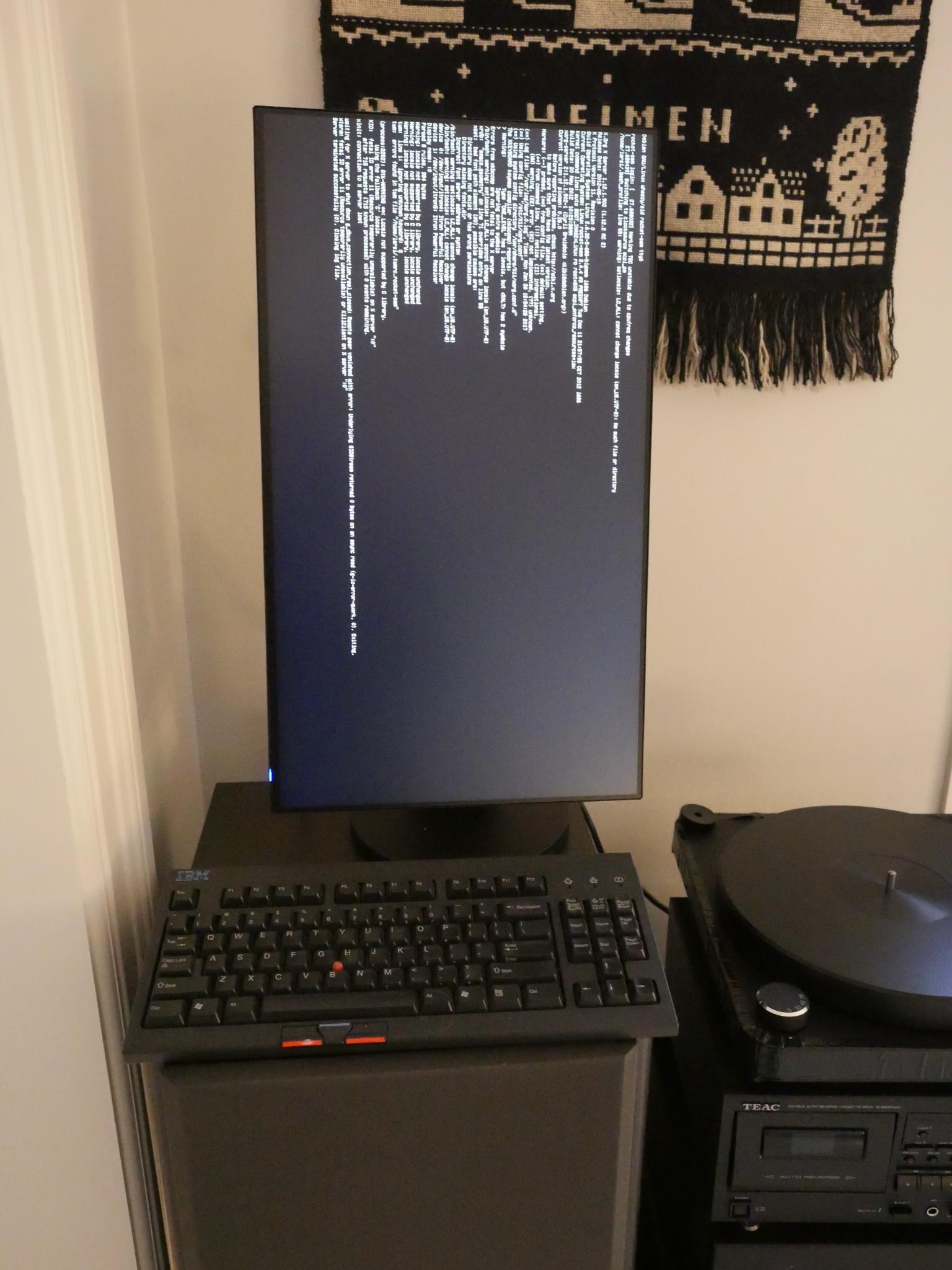 And it managed to connect to the screen! I wasn’t quite sure whether it was going to be able to do that, because it’s also a Pentium M motherboard and the video routing is not very well supported by Linux by default. But I managed to route the DVI signal out instead of the LVDS and VGA, and there’s … the Matrix? 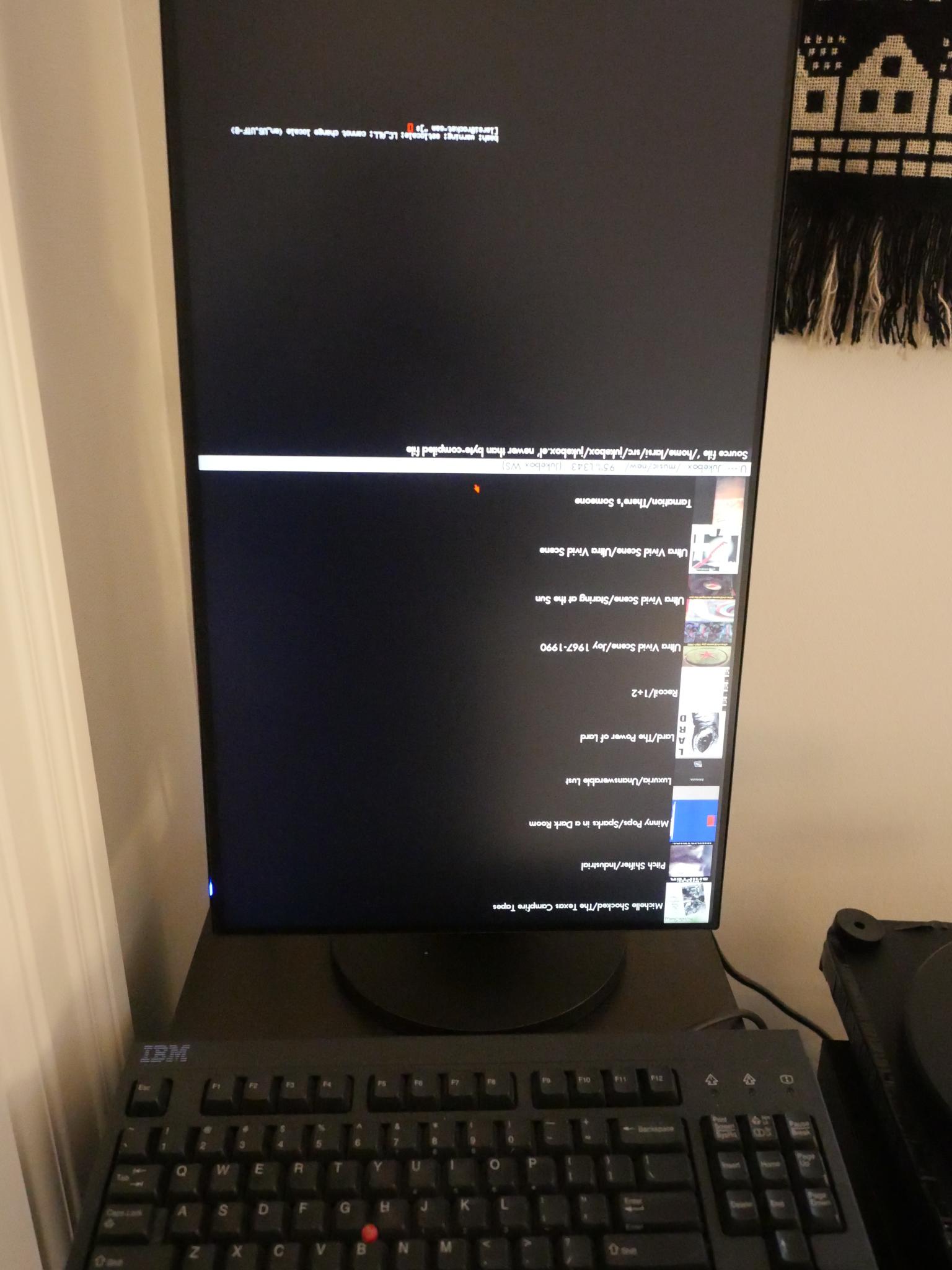 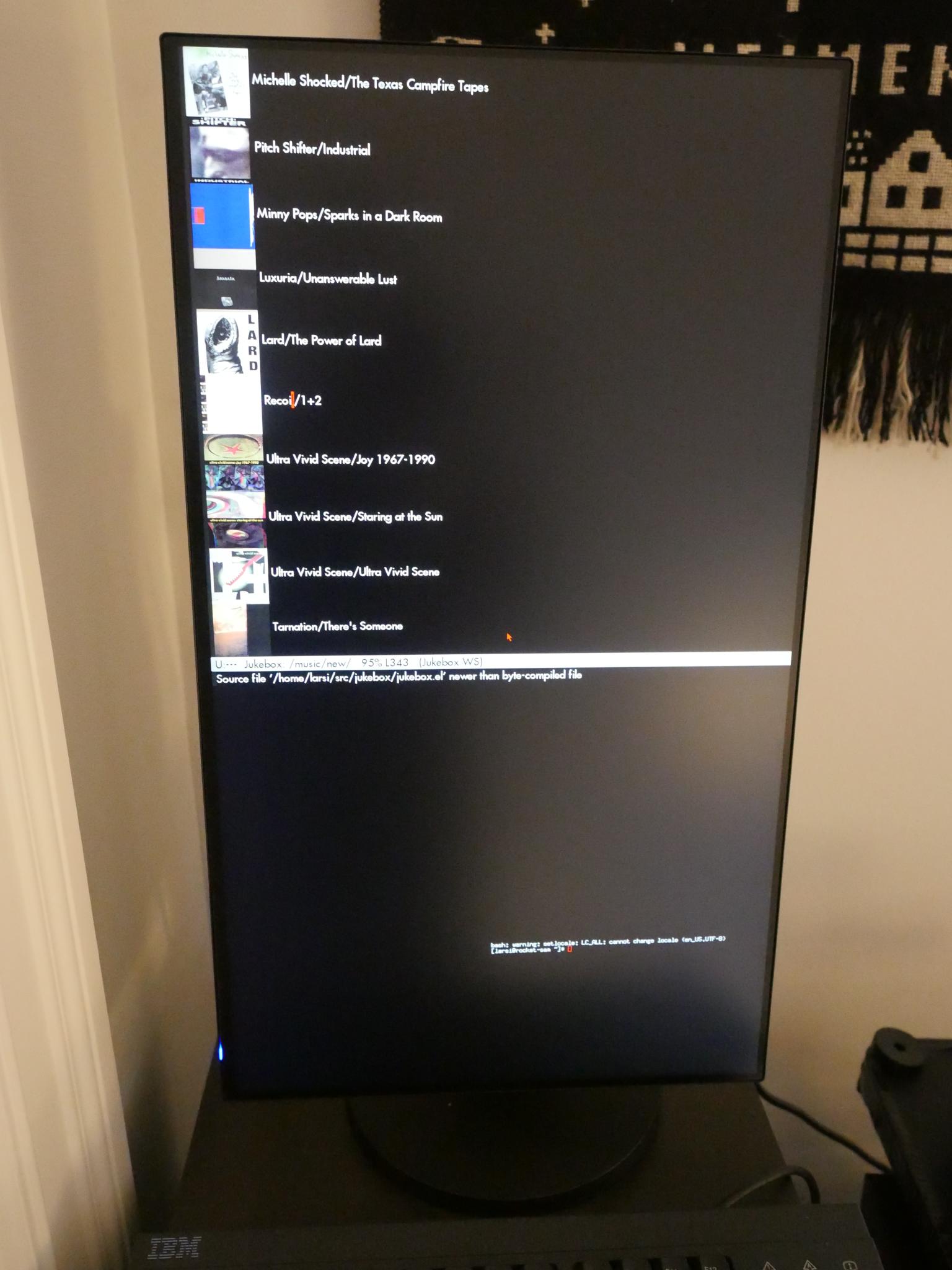 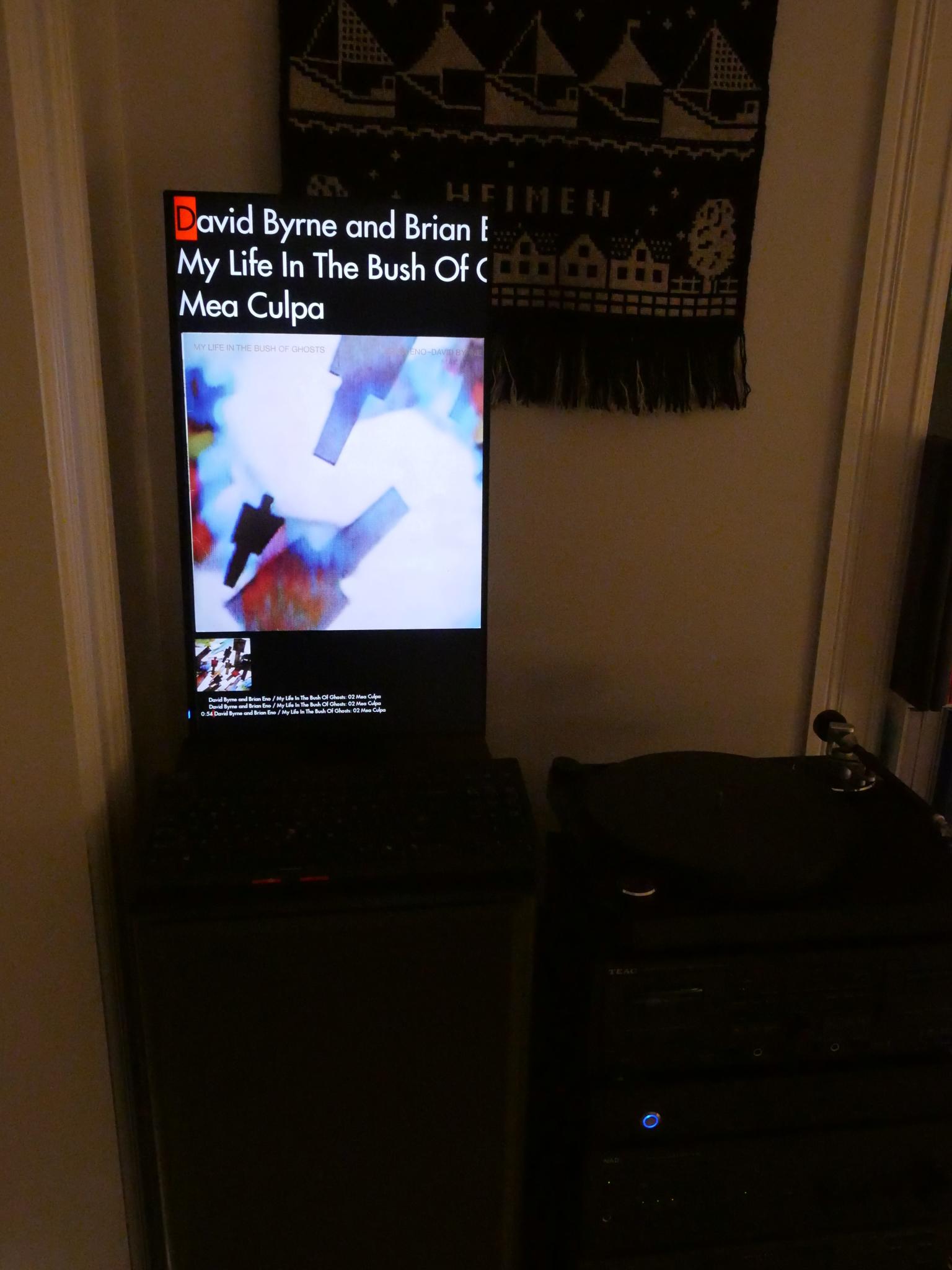 Now I have to rearrange all the display data… Hm… Does that look nice?

The monitor itself is pretty nice.  Quite wide viewing angle, but when I standing there at the screen looking for something to play, I do get a slight sheen at the bottom of the screen, so it’s not perfect.  But it’s completely silent, as far as I can tell over my tinnitus. 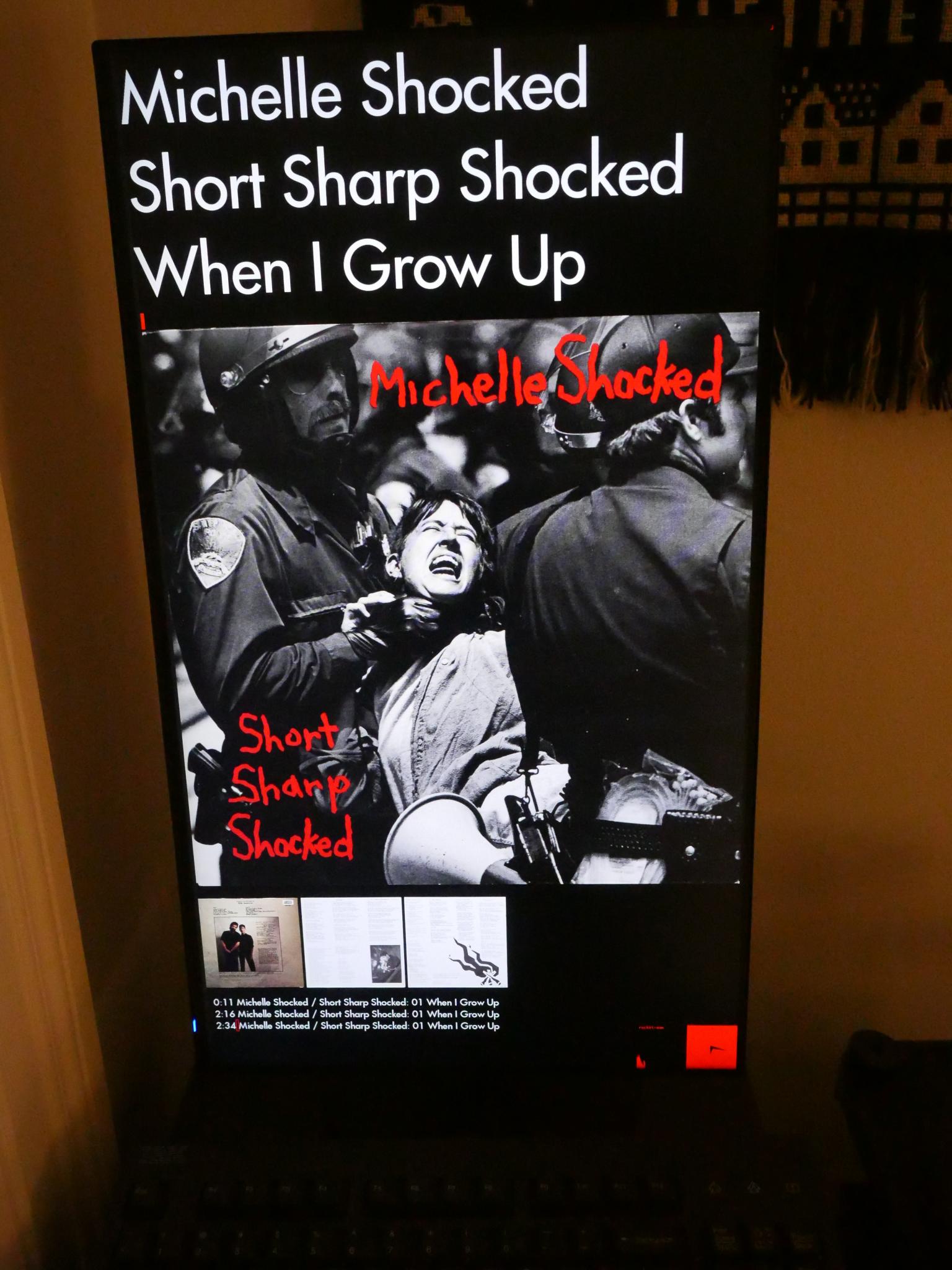 Perhaps I should have a clock and a load monitor there. Just so that not 100% of the screen is Emacs. I don’t want to appear fanatical or anything. 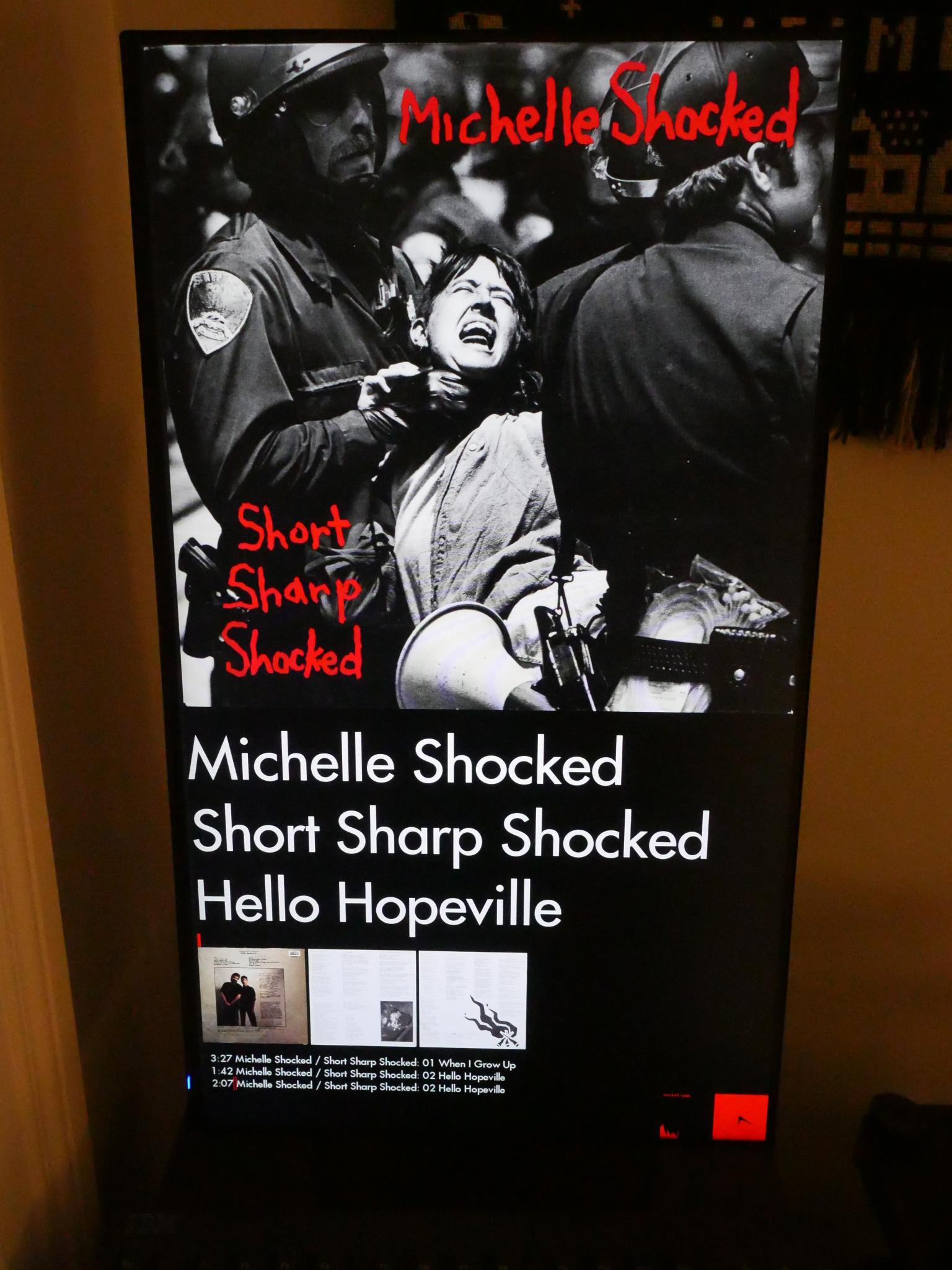 Or perhaps the sleeve on top?

Hm… Perhaps I should make that font smaller. I’m nearsighted, but not actually blind. 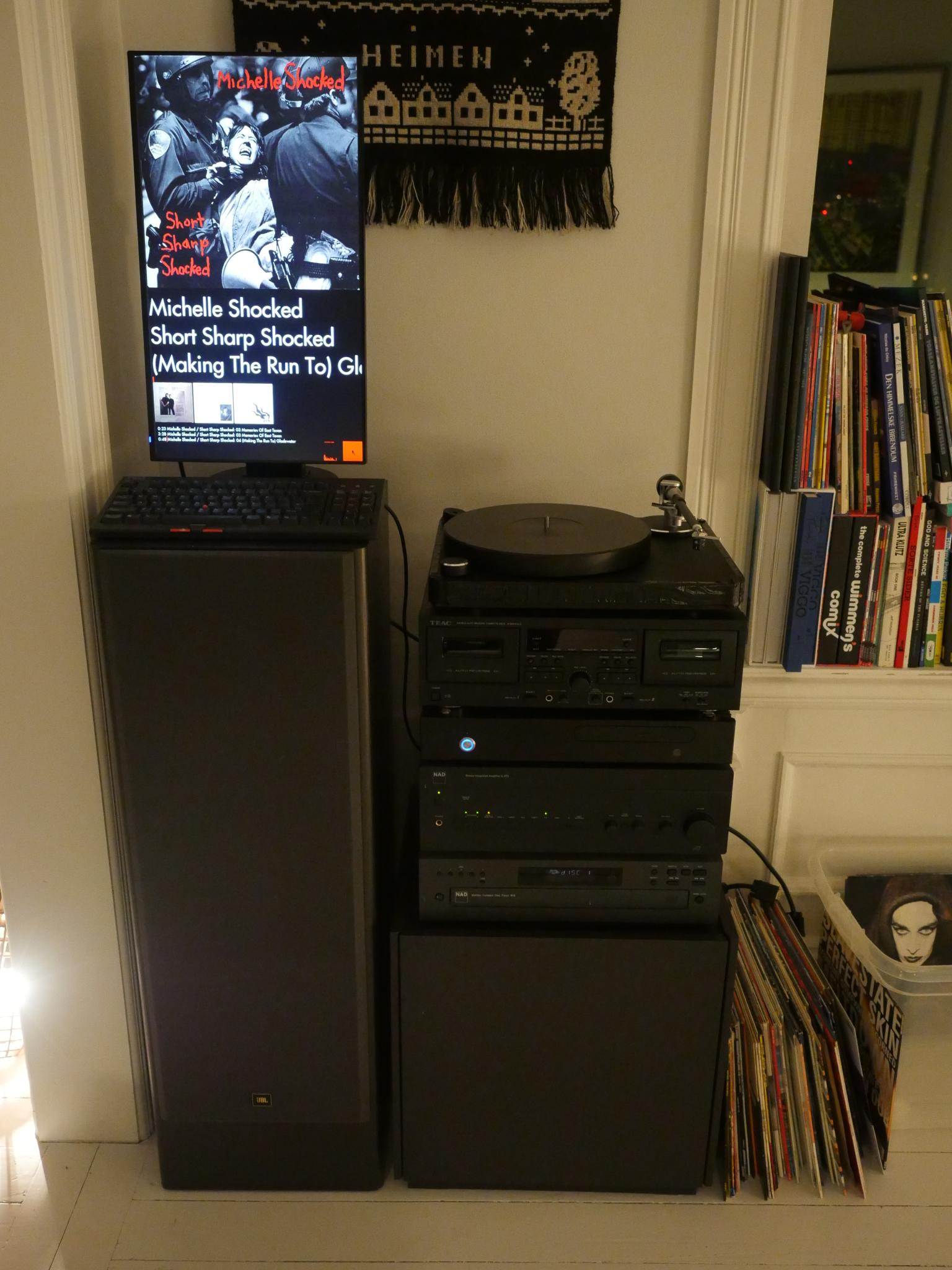 Of course not.  Not.

3 thoughts on “Obelisk: A Monitor Review”