Today I’m going to attempt a real screen printing.  I’ve selected an image from Daltokyo by Gary Panter — the first drawring from the first strip.

I’m printing on a black shirt, and the drawing is with black lines on a white background.  So I can’t really print the lines themselves, but I have to print the white background instead, so I have to create an inverted print on the transparency.  (It’s very confusing.)

Side note to summarise a bit what I’ve done wrong so far.  And hopefully learned a bit from:

1) There’s a huge difference in transparency quality.  I’ve bought three different “normal” transparencies (often called “overhead transparencies” or “OHP”), and they’re all too “pebbly” to be used for much of anything.  That is, they’re very coarse, so you get a very uneven distribution of ink.  In other words, you get a lot of white spots where you want total blackness.

2) All inkjet printers aren’t created equal.  The first one I had, an HP Officejet, printed out quite badly onto transparencies and other plastics.  Most people who do stuff like this seem to prefer Epson printers, so I got one of those, and it works perfectly.

3) There are different types of squeegees, and if you use a squeegee that’s not meant for printing onto clothes, it’ll be a lot more difficult to get a good result.

4) You need lighting to expose the emulsion.  Look at my professional-looking new rig: 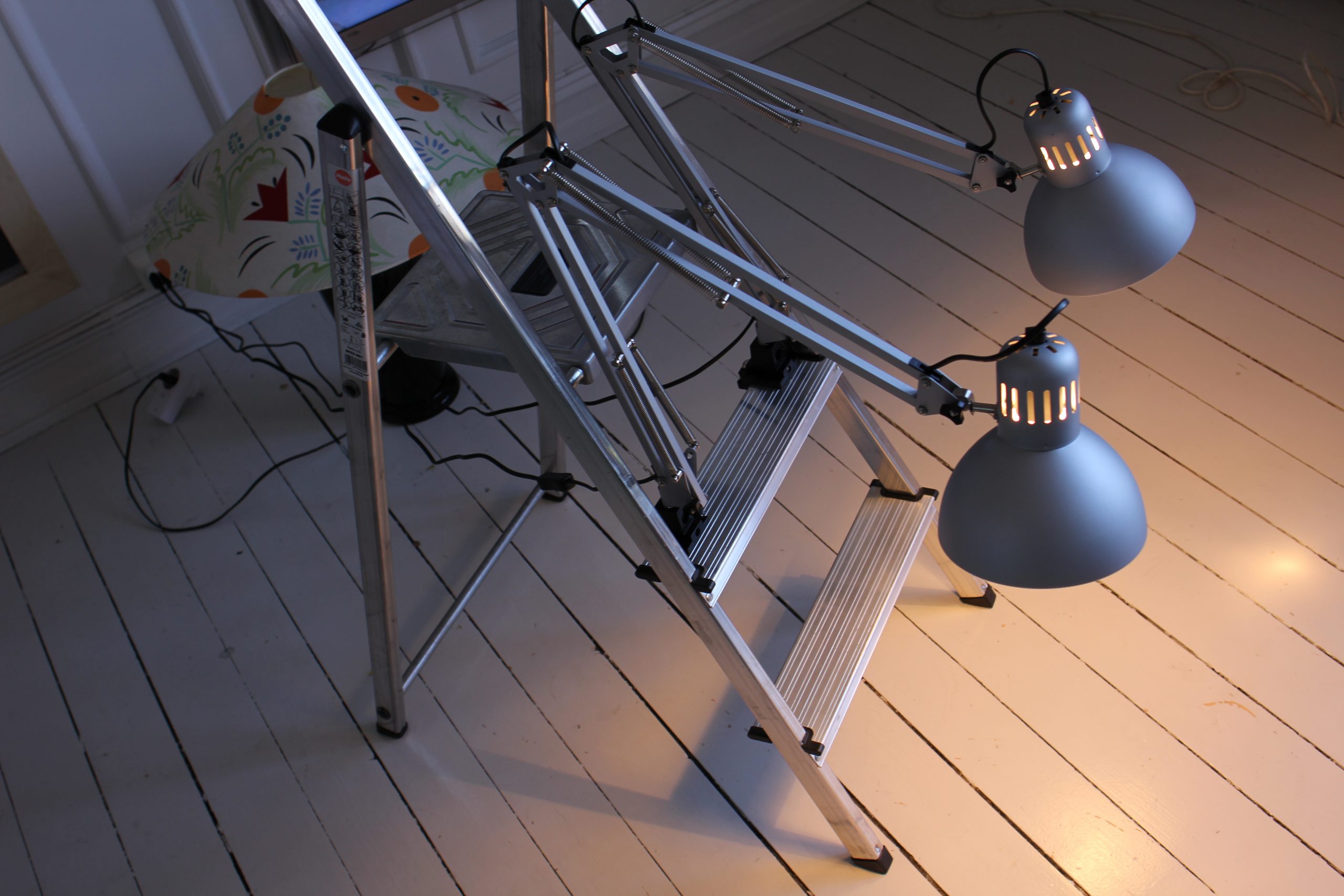 The recipes say “use either a 250W for this exposure or a 150W for that exposure”.  Well, guess what.  It’s virtually impossible to get any incandescent light bulbs in Europe these days, because of the world ending in a heat death or some other kind of trivial thing. But I’ve managed to score two 105W halogen bulbs that approximate 150W incandescents, allegedly.  And I’ve bought two really cheap Ikea desk lamps. 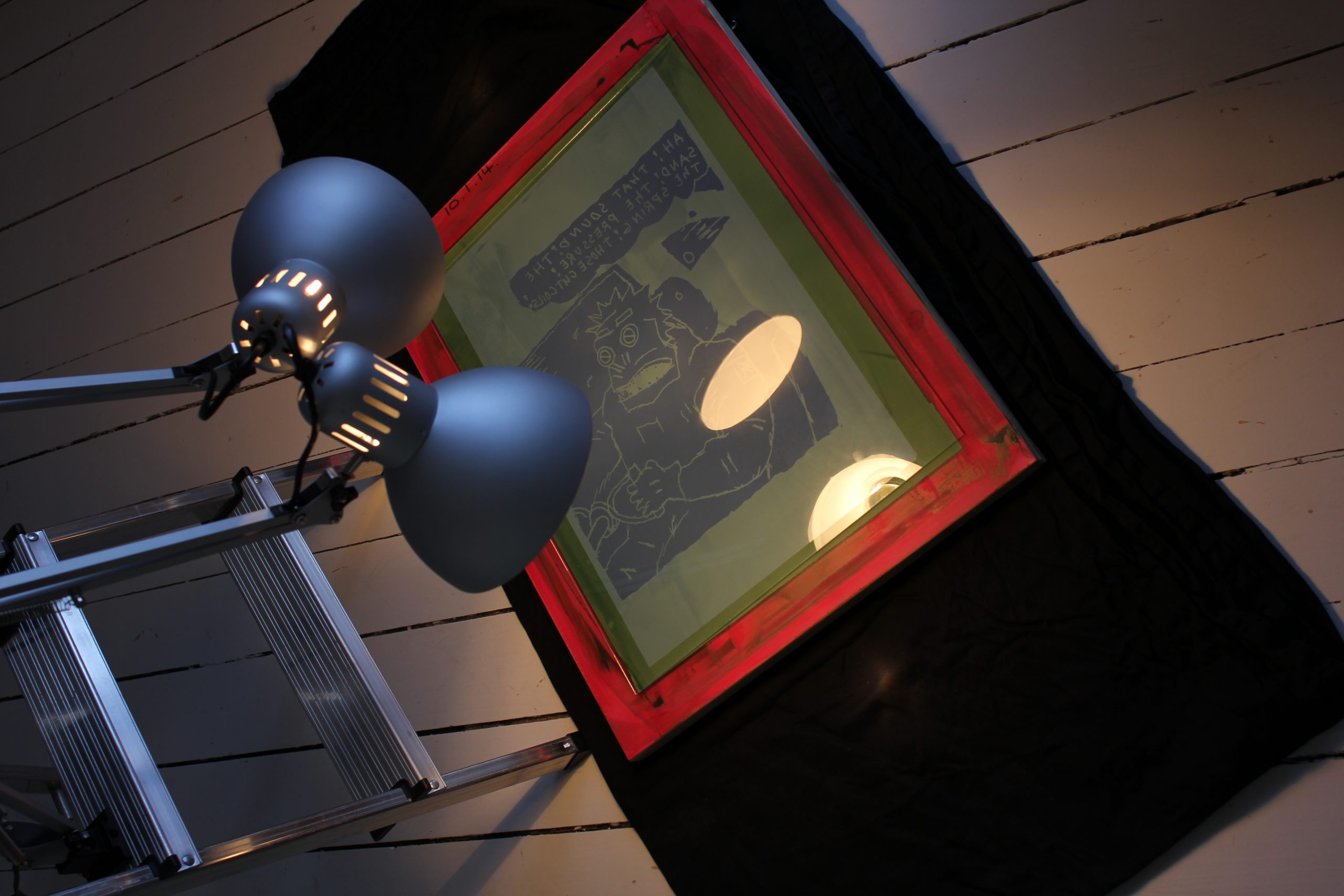 Washing the silk.  I take the head off of the shower thingie and blast it.  All the non-exposed bits rise off!  Looking good, but I could perhaps have exposed for five more minutes… 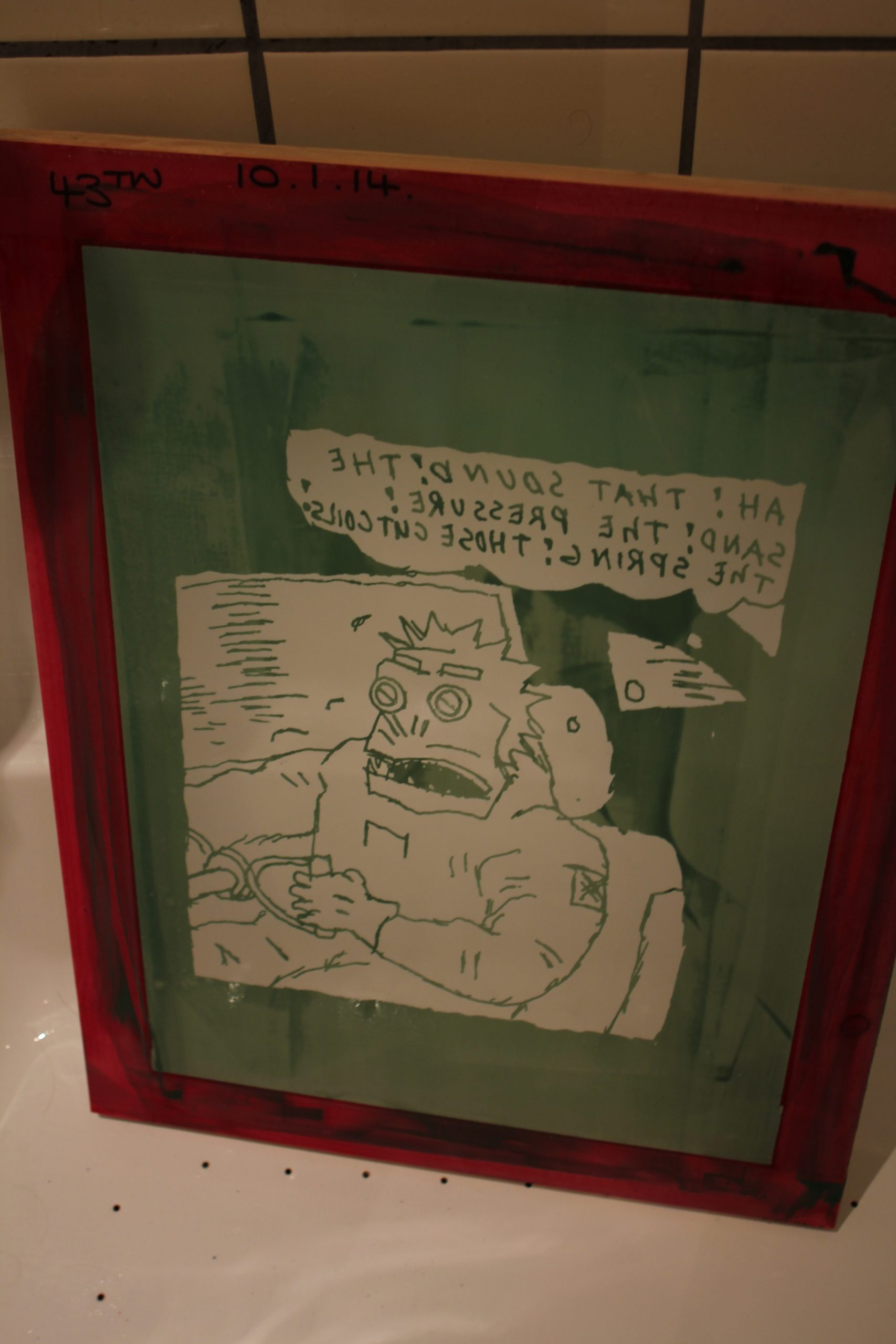 I bought a huge whopping cutting board to have something to strap the shirt onto, so that I have an even surface to print onto. 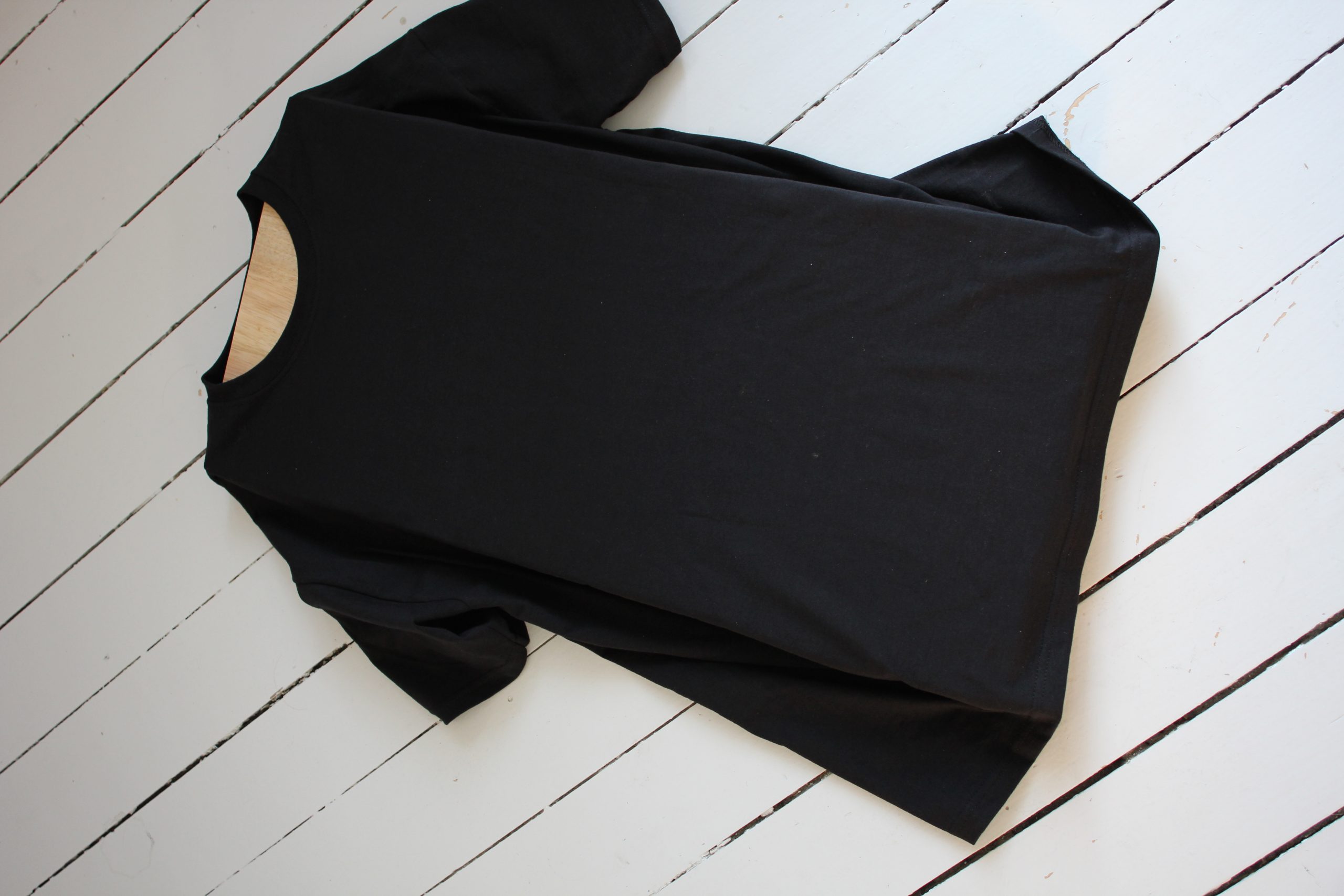 And then we just squeegee away. 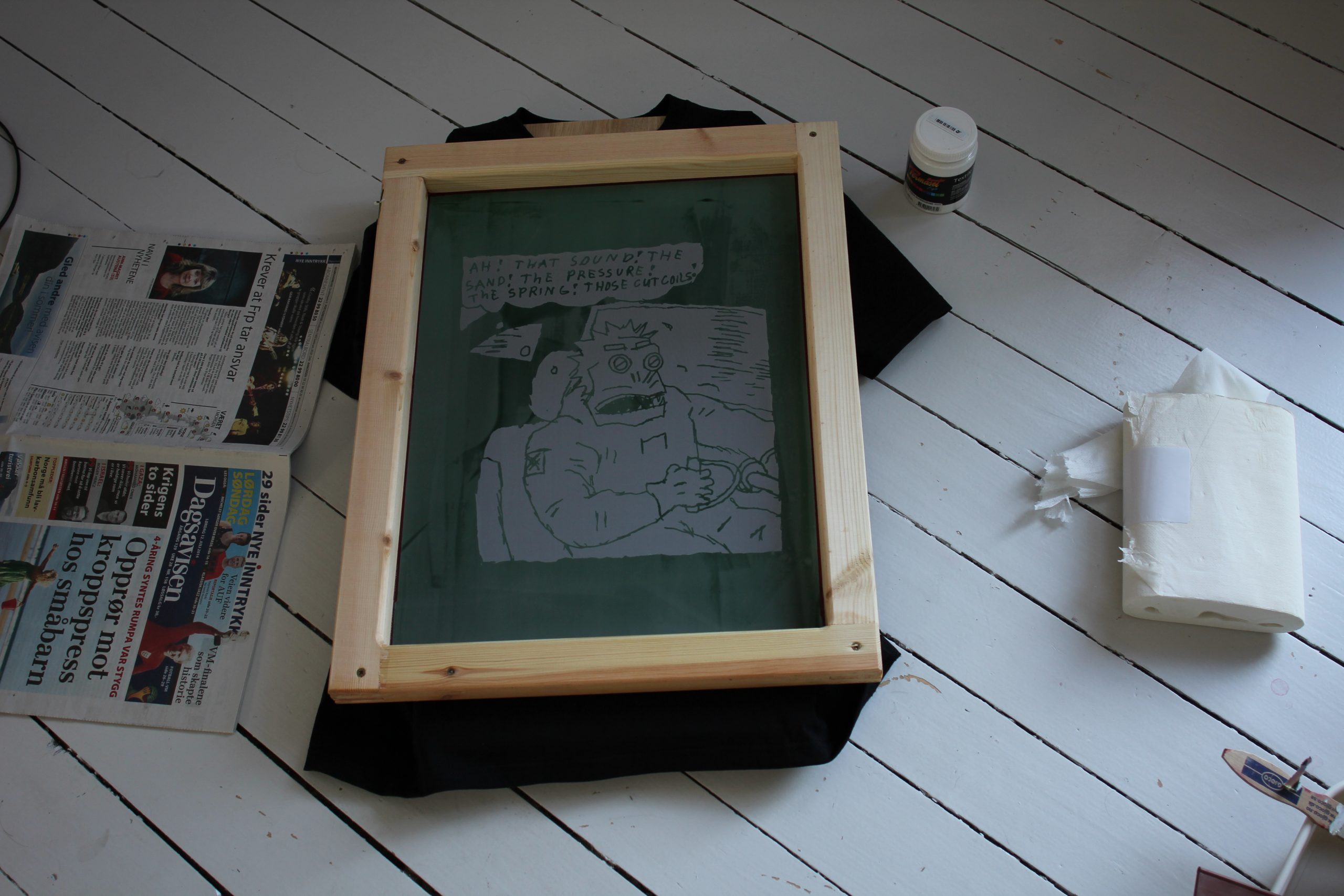 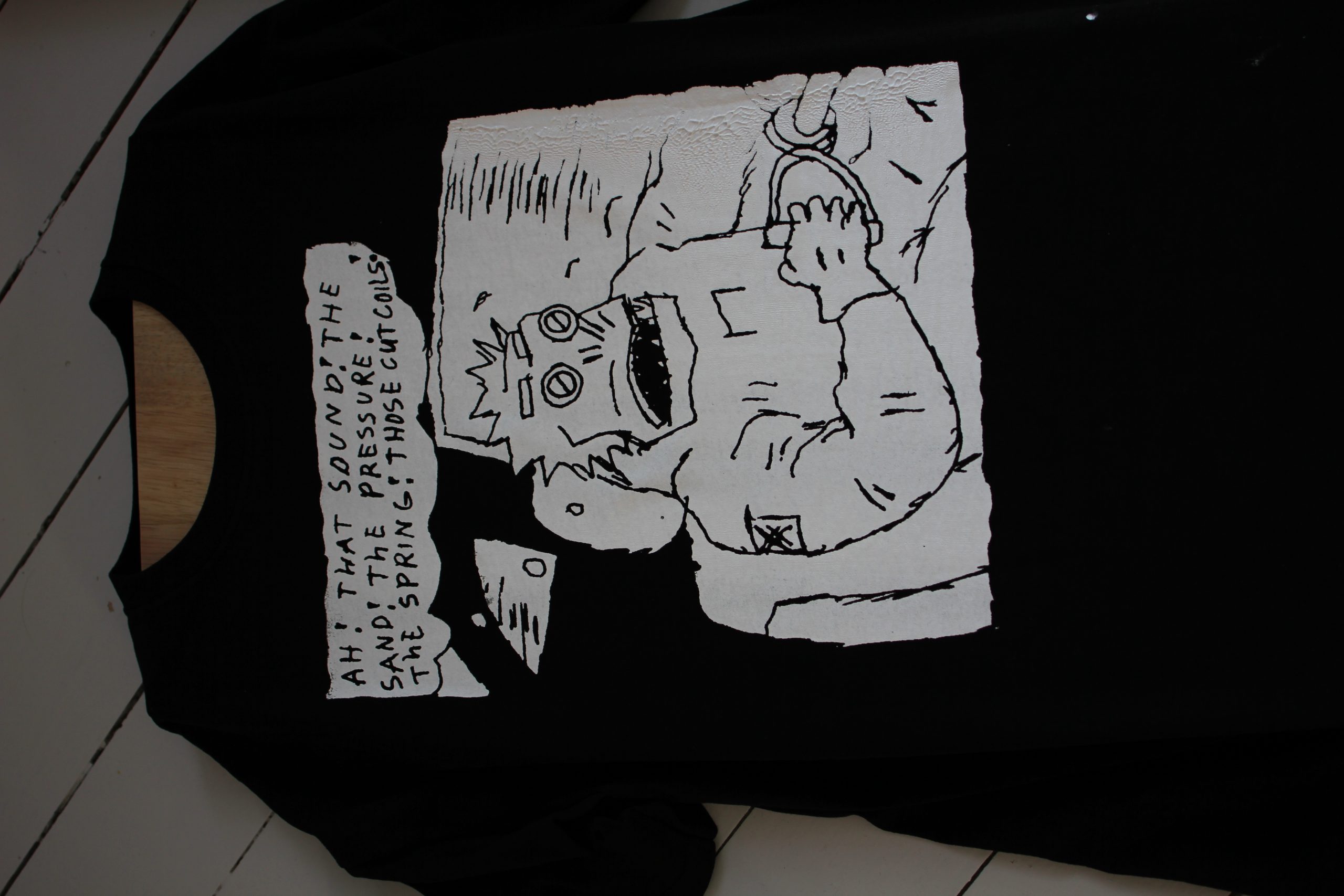 My squeegee action isn’t perfect yet.  I pushed too much ink through on the right there.  Probably because I’m right-handed…

Anyway, if you know what you’re doing (and I’m vaguely starting to), and you have all the right equipment, the turnaround on screen printing is just a few hours. It’s kinda fun and it looks nice once you get the hang of it.