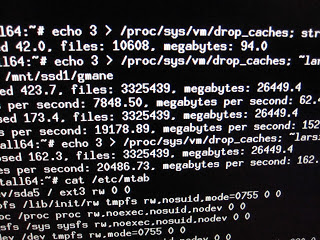 So my little utility is a C program that recursively reads a real news spool, and then just discards the result.  It’s extremely single-threaded, which isn’t typical of NNTP usage patterns, but otherwise it should be kinda ok.  It’s on GitHub.

(And always do echo 3 > /proc/sys/vm/drop_caches before testing anything.)

btrfs wastes a lot of room, though.  What takes 32GB on ext4 takes 42GB on btrfs.  But with max_inline=0 that shinks to 36GB.  Still kinda sucky.

Anyway, the results are, when reading files in readdir() order:

ext4 on spinning disk: 238 files per second (yes, I know.  With noatime.  Yes.  Yes.  Try it yourself.)
And when sorting the files in alphabetical order:

So two things stand out here:

I mean, when reading large files, I get 1.2GB/s!  This is bullshit!  Where are my IOPSes!  I want more IOPS!

Perhaps I should set the stripe size on the RAID to something smaller than the default, which is 128KB.  I mean, the mean file size in the spool is 8K, which means that it’s probably reading a lot more than it has to.