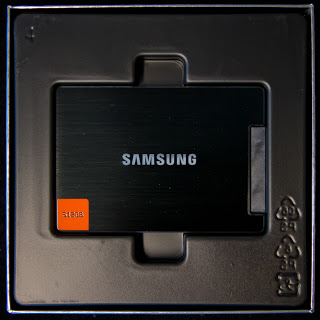 today is the most joyful day of my entire life.  The Samsung 830s for my new server arrived!  Sort of out of the blue!  The web shop insisted upon them not arriving until the end of the month, and then they sent them anyway.

Look at how pretty they are.  One might even suspect Samsung having learnt something from Apple by manufacturing most of Apple’s stuff.

The disks are so pretty that it’s almost a shame to put them into the server, don’t you think, Diary? 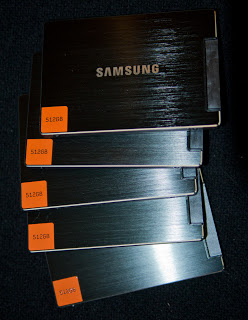 Anyway, 5x 512GB of SSD-ey goodness.  I installed them in some 2.5″->3.5″ adapters that we had laying around.  They were originally used for some WD VelociRaptor disks that had all died over the years.  Not very good disks, but nice adapters.  And that’s what counts.

I configured up the LSI MegaRAID SAS 9265-8I card in RAID5 mode, and then put ext4 on the partition.

Diary, you won’t believe this.  With a simple “cat /dev/zero > /mnt/ssd/file” command, iostat told me that I had a writing speed of 1.2GB/s.  Yes!  Jiggobytes!  Not bits!  Bytes!  Jiggobytes! 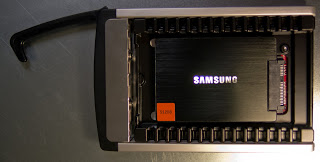 I only got 600MB/s when reading the same huge file back.

So to get slightly more serious about benchmarking, I installed iozone, and made it do its test on five 100GB files in parallell.  It reports 1.5GB/s on large writes, and 1.2GB/s on large reads! 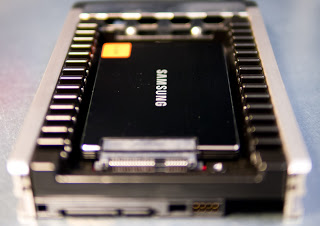 So I wasn’t just imagining things!  This thing is blazingly fast on pointlessly huge files! I mean, the theoretical max should be about 2GB/s, since each of the five SSDs have a writing speed of about halv a gig each, and it’s a five-disk RAID5 system, but I hadn’t actually expected the LSI RAID card to deliver anything like this, because, you know, Diary, all hardware sucks.

Now I just have to write something to emulate read NNTP server load (i.e., lots of small files in huge directories), and then do some benchmarking on differents file systems to see what happens.