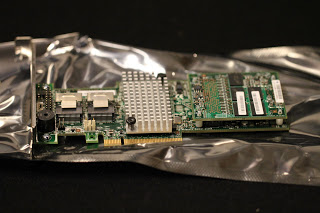 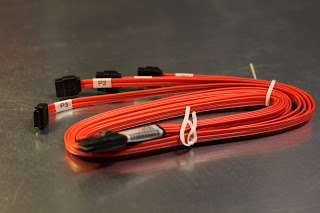 today the RAID card arrived for my new server. I had apparently only ordered a single SATA cable instead of the six I had meant to order.

But it turned out that the card didn’t use normal SATA cables at all, but a weird one-to-four connector.  It’s a big connector on one side, and four separate SATA cables comes out of it.

So for once messing up the order saved me some money.

I installed the card in my 2U machine.  As you can see, those weird connectors are pretty high up on the card, which means that the cables take a rather dramatic 90 degree turn.  I hope that’s not going to cause any problems…  At least the lid closes.

I connected it all up and booted the machine. 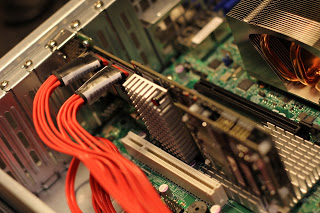 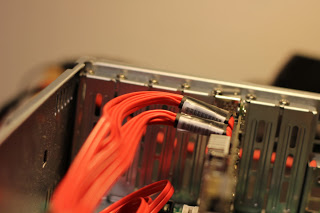 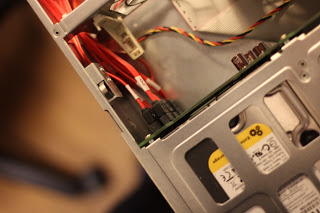 After fiddling aorund in the glorious and very oddly named “WebBIOS” (it’s not actually on the web at all), I managed to set up my test SSD in RAID0.  That is, a single Corsair Force 3 disk.  Apparently it doesn’t like doing JBOD…  At least, I couldn’t find any setting for it.

Writing to the device gives me 480MB/s, while reading gives me 375MB/s.  Not all that impressive, but at least is demonstrates that the old backplane really really doesn’t lead to any major problems, since that’s clearly SATA 3 speed. 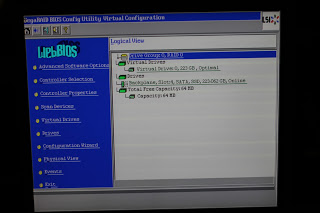 Now I  just have to wait for the Samsung 830s to arrive.  Surely they can’t be serious about that horribly late arrival date… I’ll be in Rome by then…  I won’t know whether this all works until months and months from now…

Woe is me, Diary.