after the rather disappointing random read benchmarks (I mean, 4K files a second? It’s pitiful) I almost went into a severe depression and started thinking about using vi.  Again.

But then I went back to the hardware pusher’s web site and noticed something strange.  They’re selling something that’s supposed to make their LSI MegaRAID 9265 card suck less!  It’s apparently a firmware upgrade that removes all the sleep(1) calls in their code!  Or something!  At least that’s what I got from reading what they’re saying.  It’s gonna make the IOPS-es on SSD be three times better!

On the one hand, one could be annoyed that they didn’t just leave out the apparent sleep() calls in the standard firmware.  On the other hand, perhaps this is the answer to everything!

Dear Diary, I forked over more money, and I’m now waiting all aflutter for the magical firmware stick to arrive.

Meanwhile, here’s a picture of Oslo.  Winter has sort of arrived, at last: 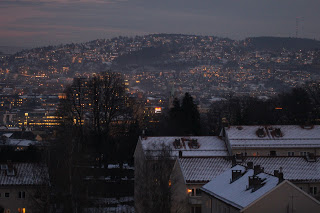