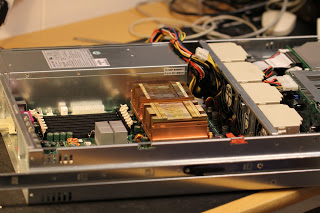 since the beginning of time, Man has yearned to have their news spools on solid state disks instead of those pesky spinning ones.

The load on the Gmane news server frequently tips over the 16 point (which means that access is denied) purely from people and bots hammering the web and news interfaces too hard.

SSDs have been too expensive until now, and they still are, really.  But today I’ve decided to take the plunge! 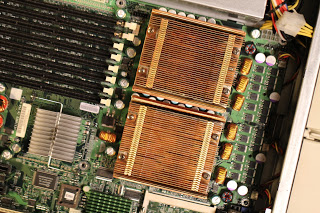 I’m giddy with excitement as I order five 512GB Samsung 830s.  They’re supposed to have lots of them there IOPS-es!  Like sixty thousand of them!  I’m not quite sure what that means, but surely it has to be enough.

But what to put them in?  I rummaged through the discarded servers that somebody (i.e. me) had schlepped out from the server room.  I found this nice 2U Dual Core P4 Xeon machine with room for six SATA disks.

But OH NOES!  It only supports SATA 1.5Gbps, while the disks are 6Gbps.  That’s a lot fewer of them bps-es than I want.  So I order a new motherboard that has SATA 3.0 and a new CPU.  I can’t wait to get this going!

(Read the next excerpt from my secret diary!)