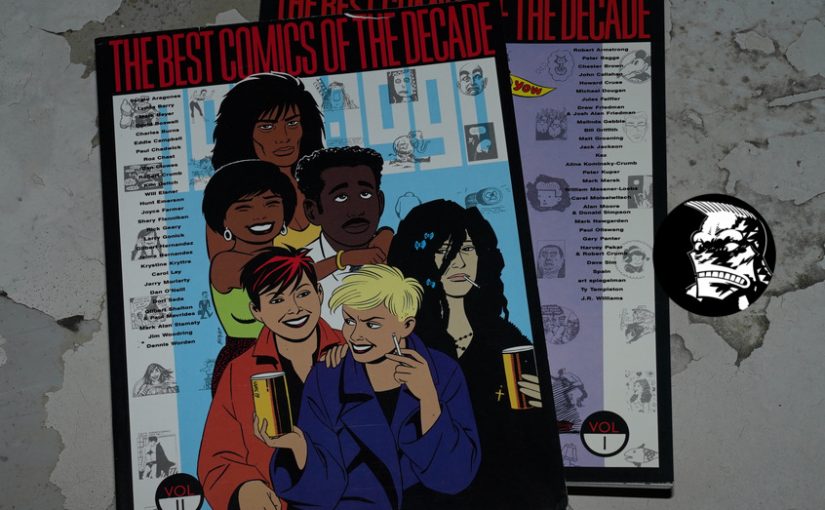 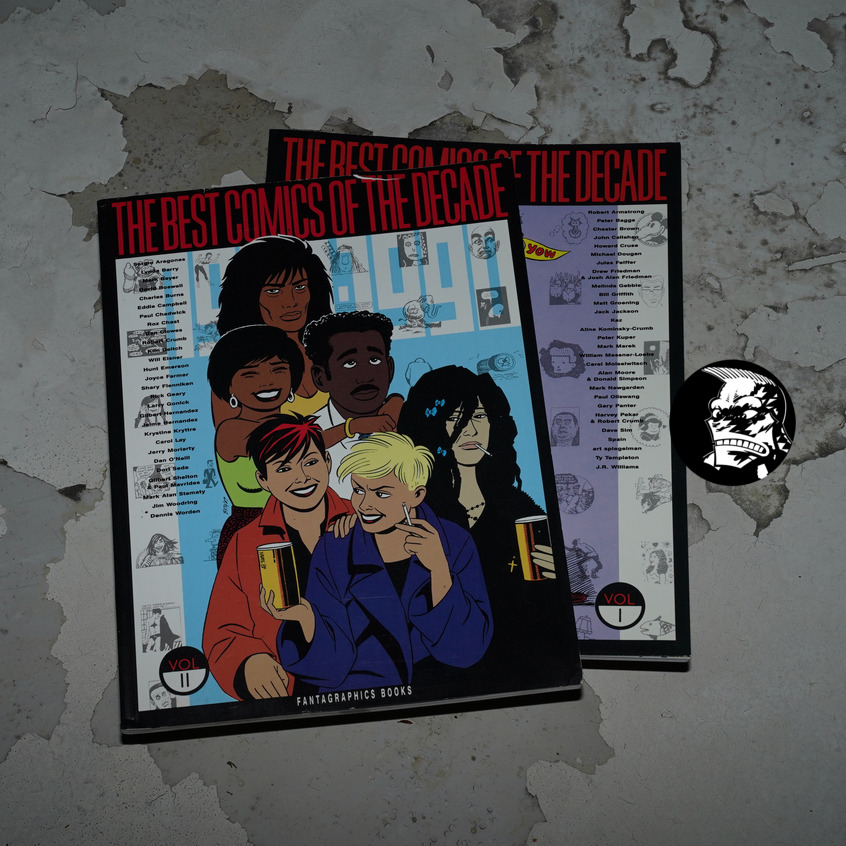 You’d think this blog series would be over now, right? Well, it was! But then when I was putting all the comics back into the bookshelf… 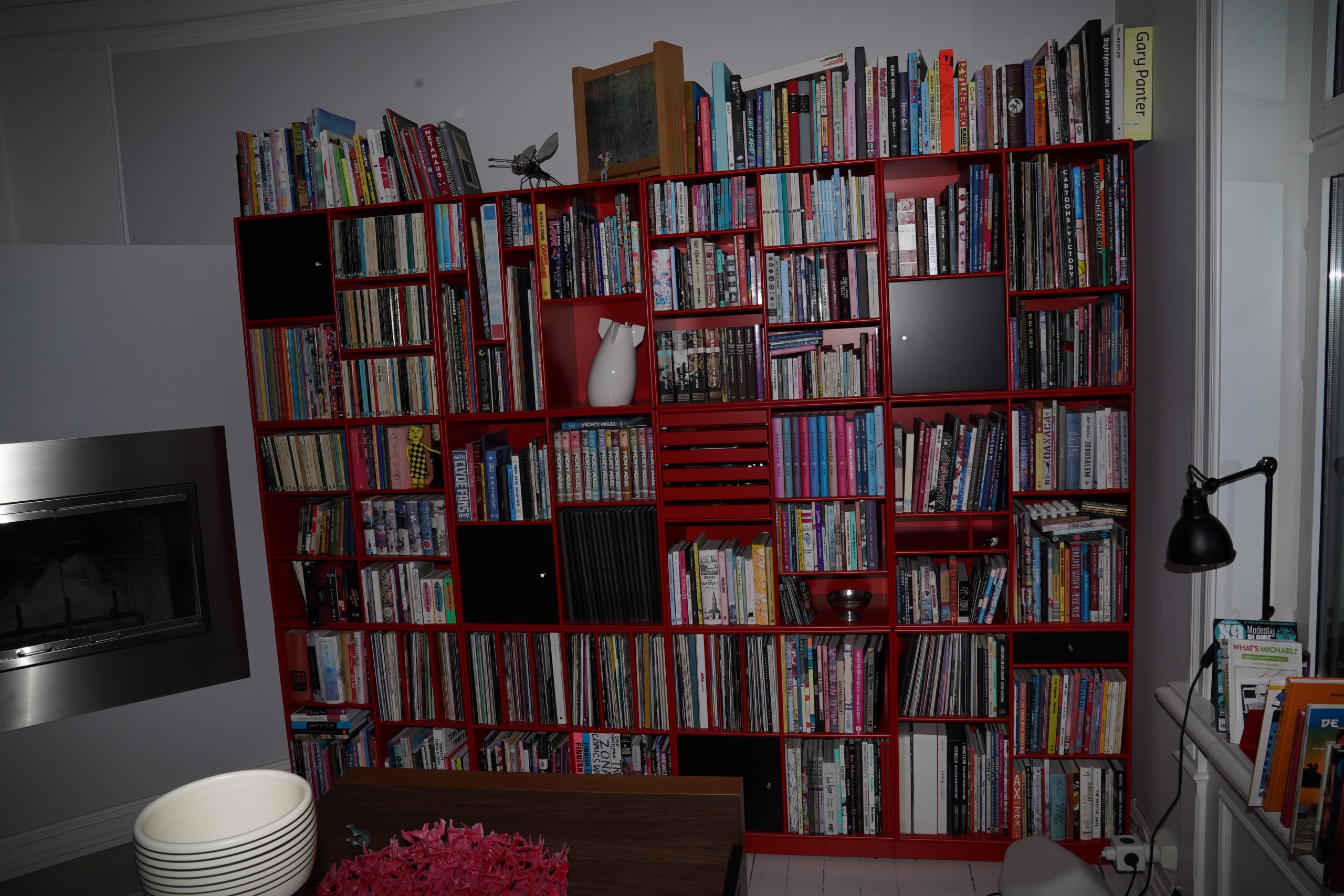 … I found stuff I’d missed when rooting through the shelves for punk comix stuff at the start of this Odyssey in … May? (And I also bought a couple more things from ebay.)

So there’s at least another week’s worth of posts coming, but then it’s over. Over, I teels ya!

Onto The Best Comics of the Decade. I remember this being a somewhat controversial publication — lots of people angry that they (or their favourite creator) hadn’t been featured. It’s an early stab at making a comics canon, sort of? And I didn’t have these books at the time: I was a poor student and figured that I’d most likely already have most of the good stuff in here, anyway.

But I was curious now to see what Fantagraphics’ view of the 80s comics world would look like, and which people from the “punk comix” sphere would be featured here, so I got these books now. 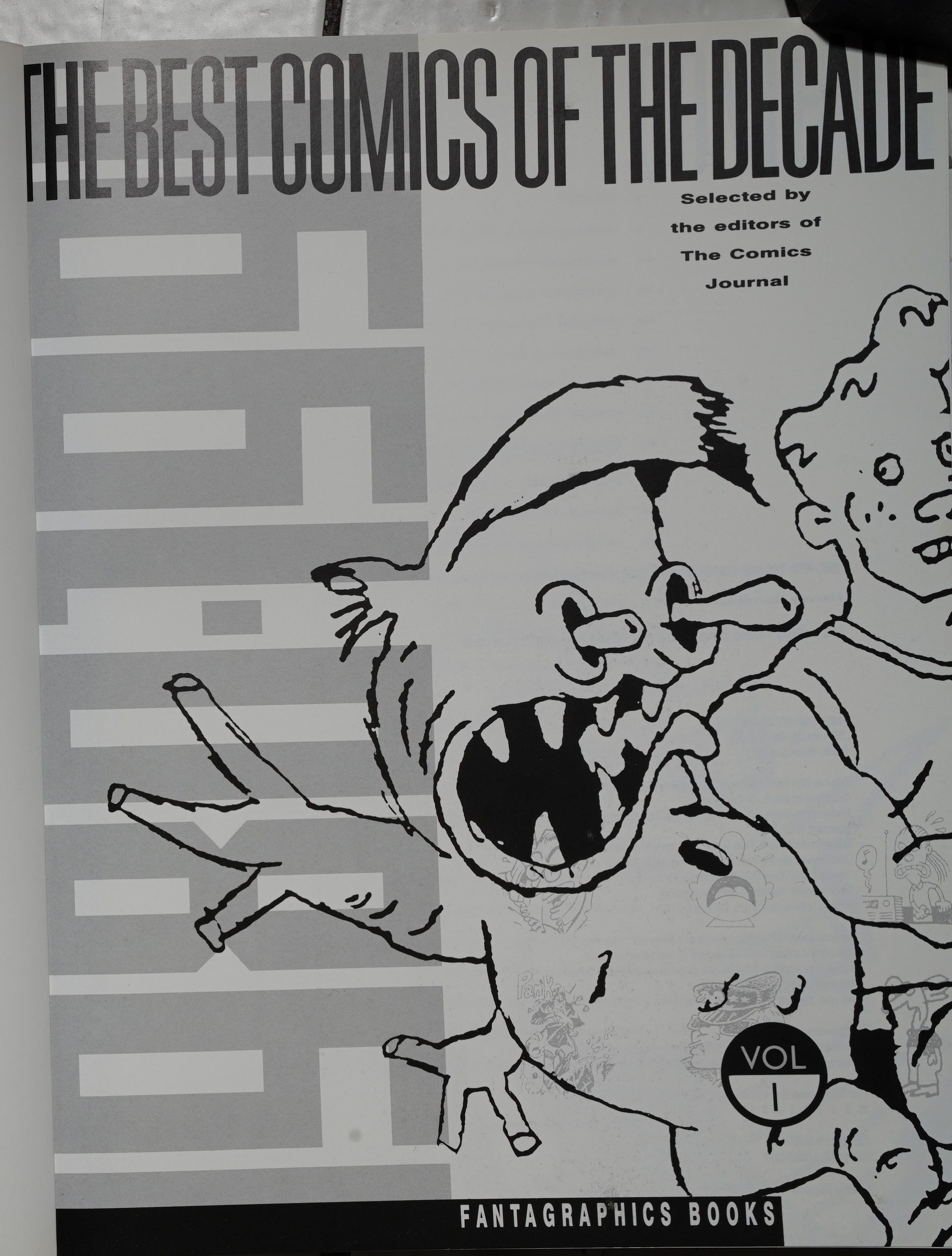 Ah, this is explicitly a Comics Journal selection — not a Fantagraphics one, which makes sense.

The editors, Gary Groth and Kim Thompson, write a short introduction that I’m sure offended nobody… 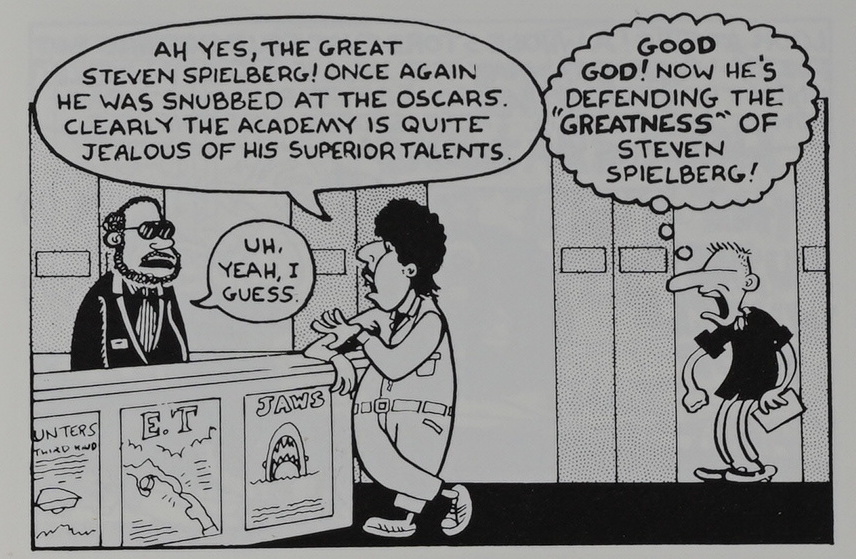 And then its just comics, comics, comics. There’s a brief introduction of each artist at the end of each of each book, but there’s no contextualisation in the book itself — no division into themes or anything. I guess the Peter Bagge story that opens the first book is a statement of sorts: Everything sucks, but at least we’re smart.

(I found this panel particularly funny, because Spielberg is swimming in Oscars now, and if you say something bad about him these days, you’ll get all of Film Twitter on your tail. Hm… let’s see if it works: “Schindler’s List sucked.” There. *waits nervously*) 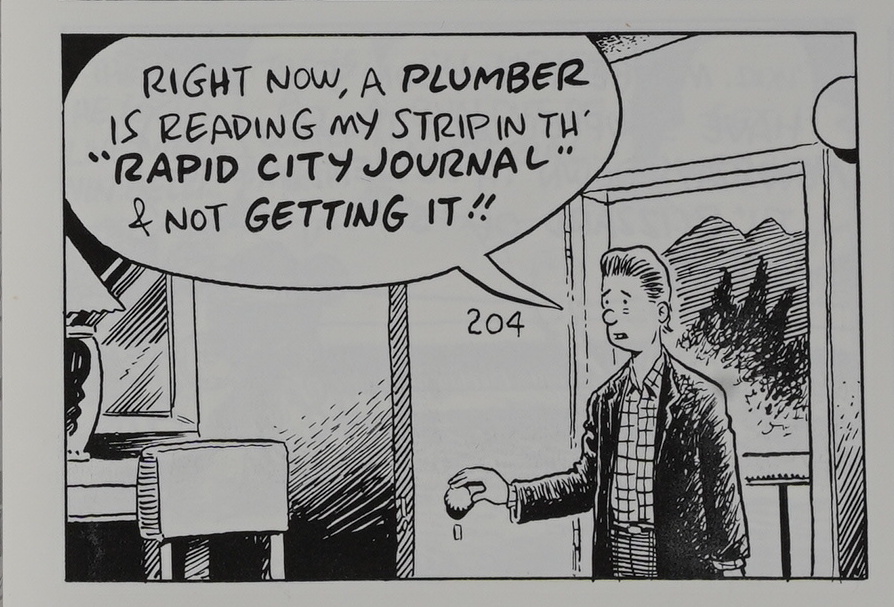 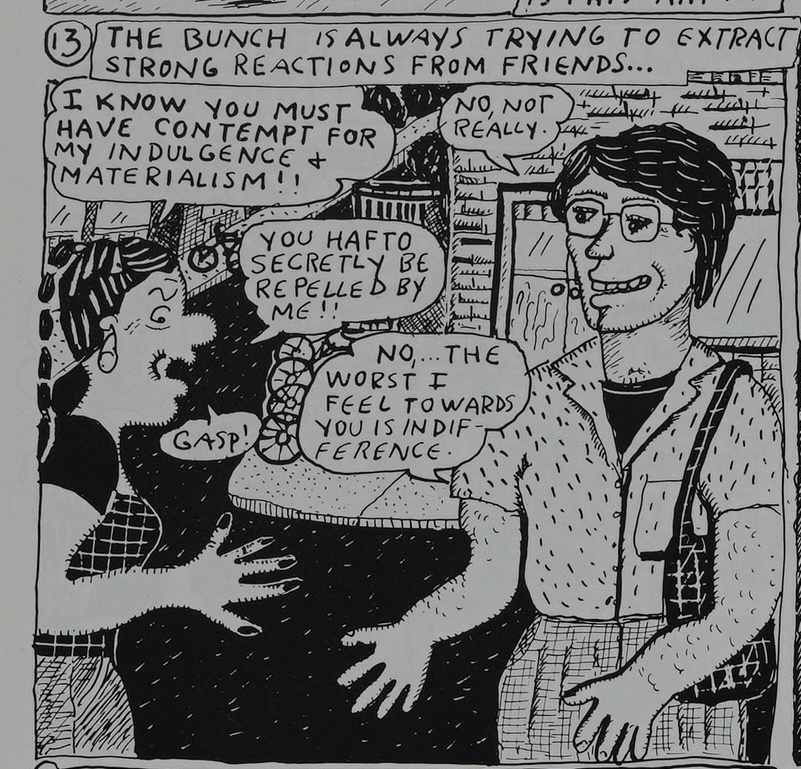 Every time somebody mentions Melinda Gebbie (including me), they mention how underappreciated she is. I’m starting to wonder whether she’s actually pretty appreciated? Perhaps she’s just the most “person-who-people-say-is-underappreciated?” Anyway, she’s great.

And then we get a colour section! With a colour Hercules Amongst The North Americans by Mark Marek. I didn’t know this was originally in colour! I’ve read the black and white version earlier in this blog series… 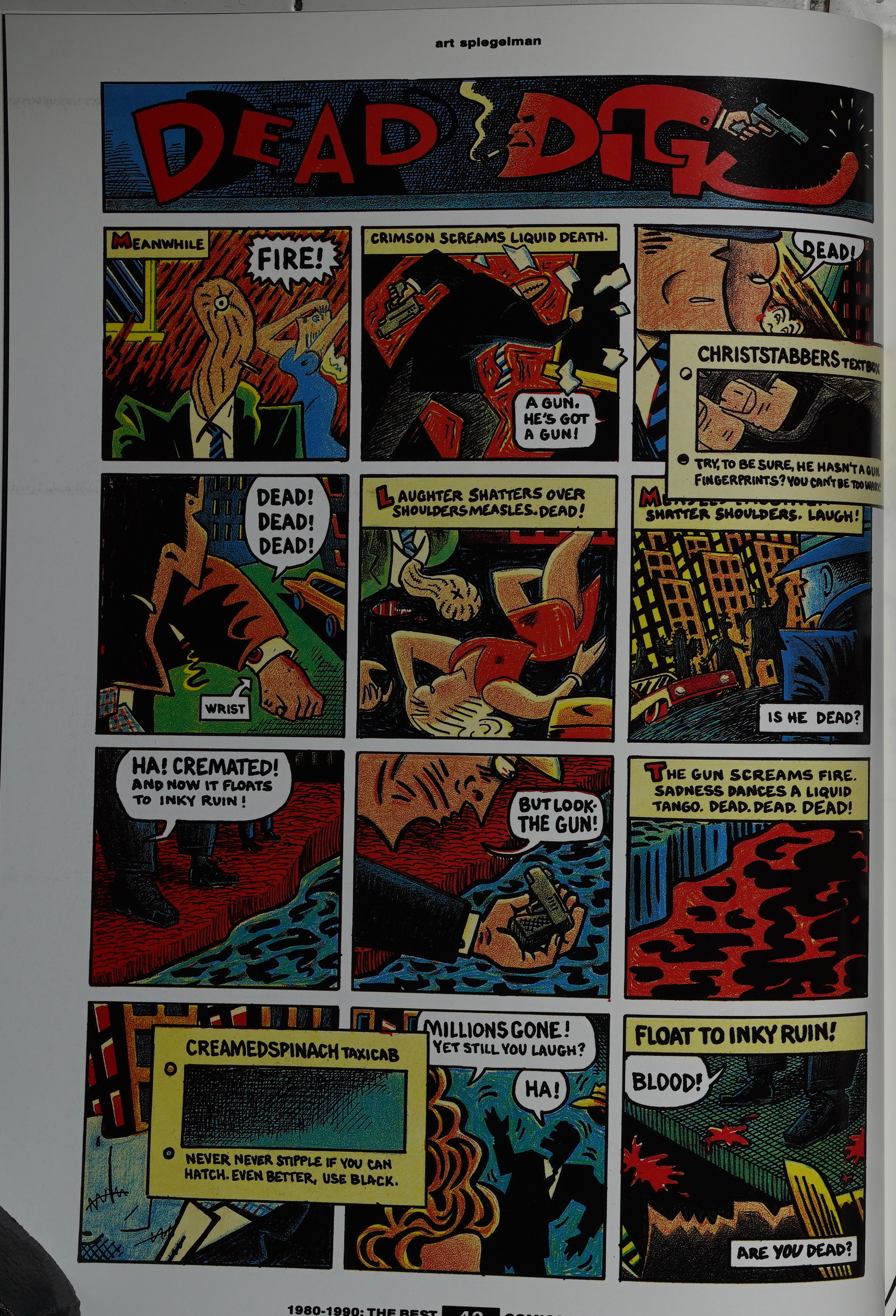 Anyway, I wanted to check these books for Raw artists, and here’s Spiegelman. But this is the only page of his here, which seems… er… odd? I mean, it would probably make no sense to include a Maus excerpt here, even if Fantagraphics were able to get the rights to do it, but it’s still a pretty odd selection. On the other hand, Spiegelman’s more famous shorter works were all from the 70s, so perhaps there wasn’t that much to choose from. 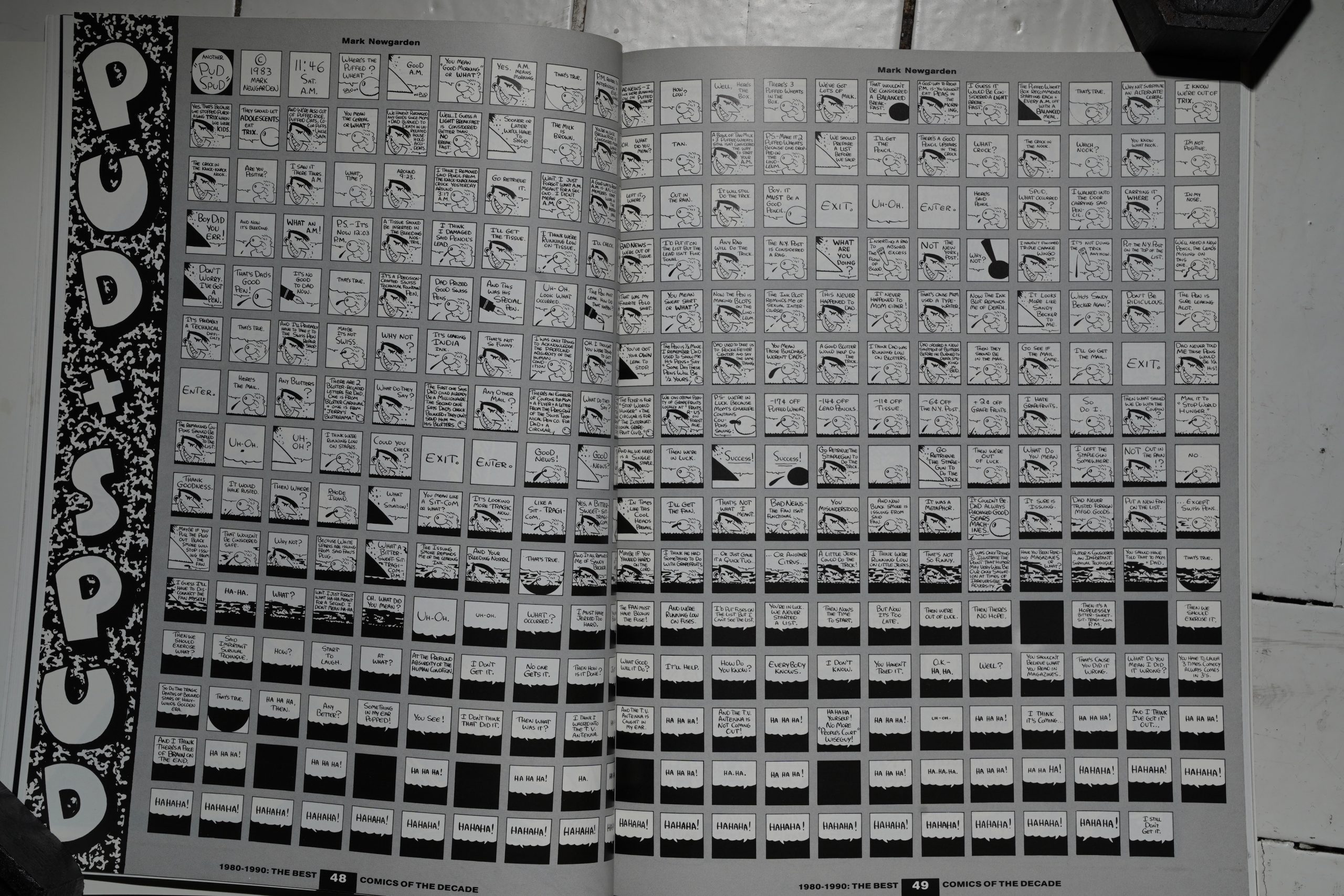 These books are pretty dense. Mark Newgarden’s very dense, too, but the editors have chosen works that are very compact. It makes total sense — if you’re cramming a decade into 240 pages, you can’t really go with any epics. But you still want to give the readers more than a single bite of each artist, so you choose the denser pieces. 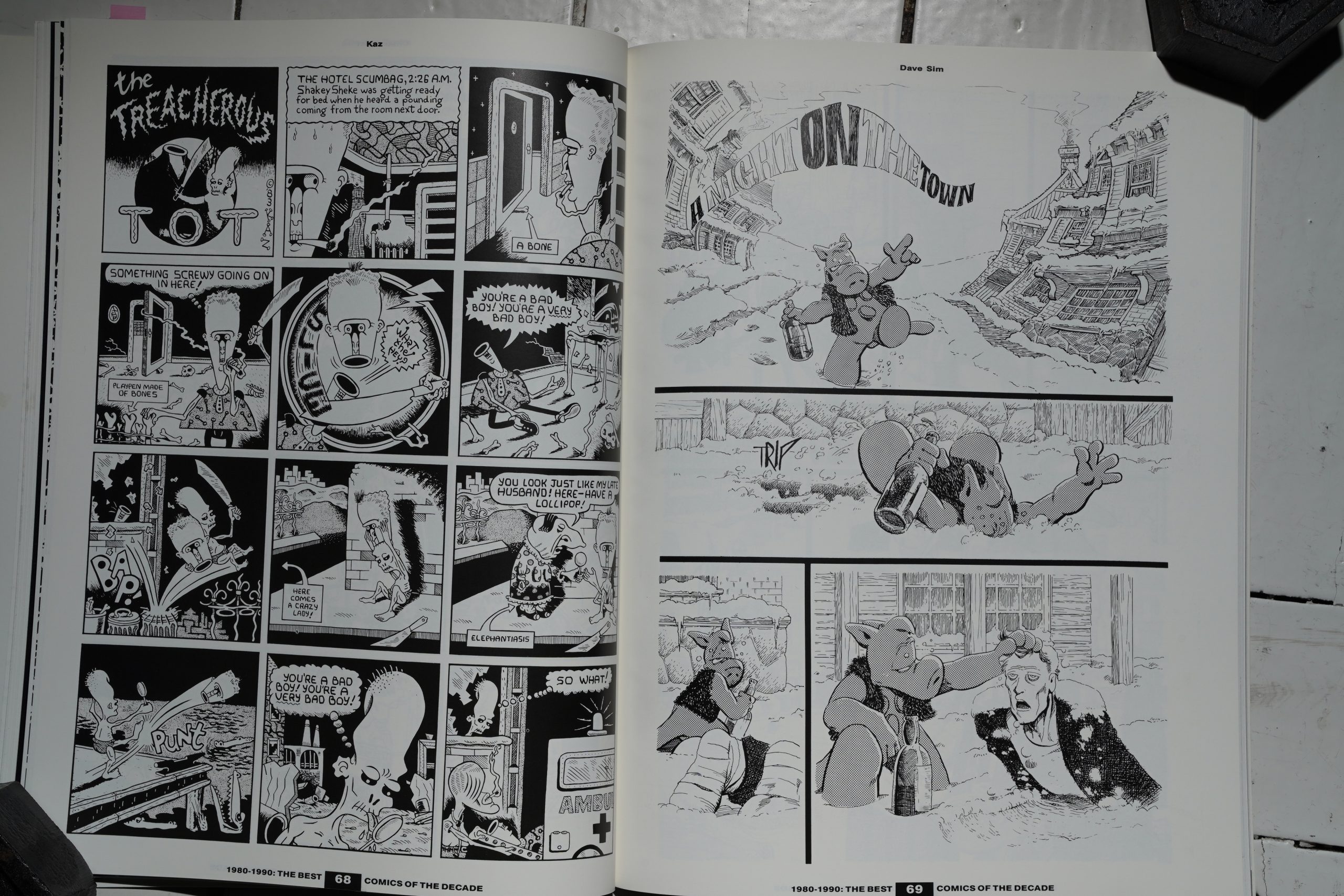 These books are a good read — they’ve got good flow, and they’re pretty cohesive. It’s clear that the editors have a particular taste in comics: They like funny stuff, and they like narrative stuff, and they don’t like much else. I think there’s only a couple of pieces you could call “experimental”, and the Spiegelman page up there is one of them. 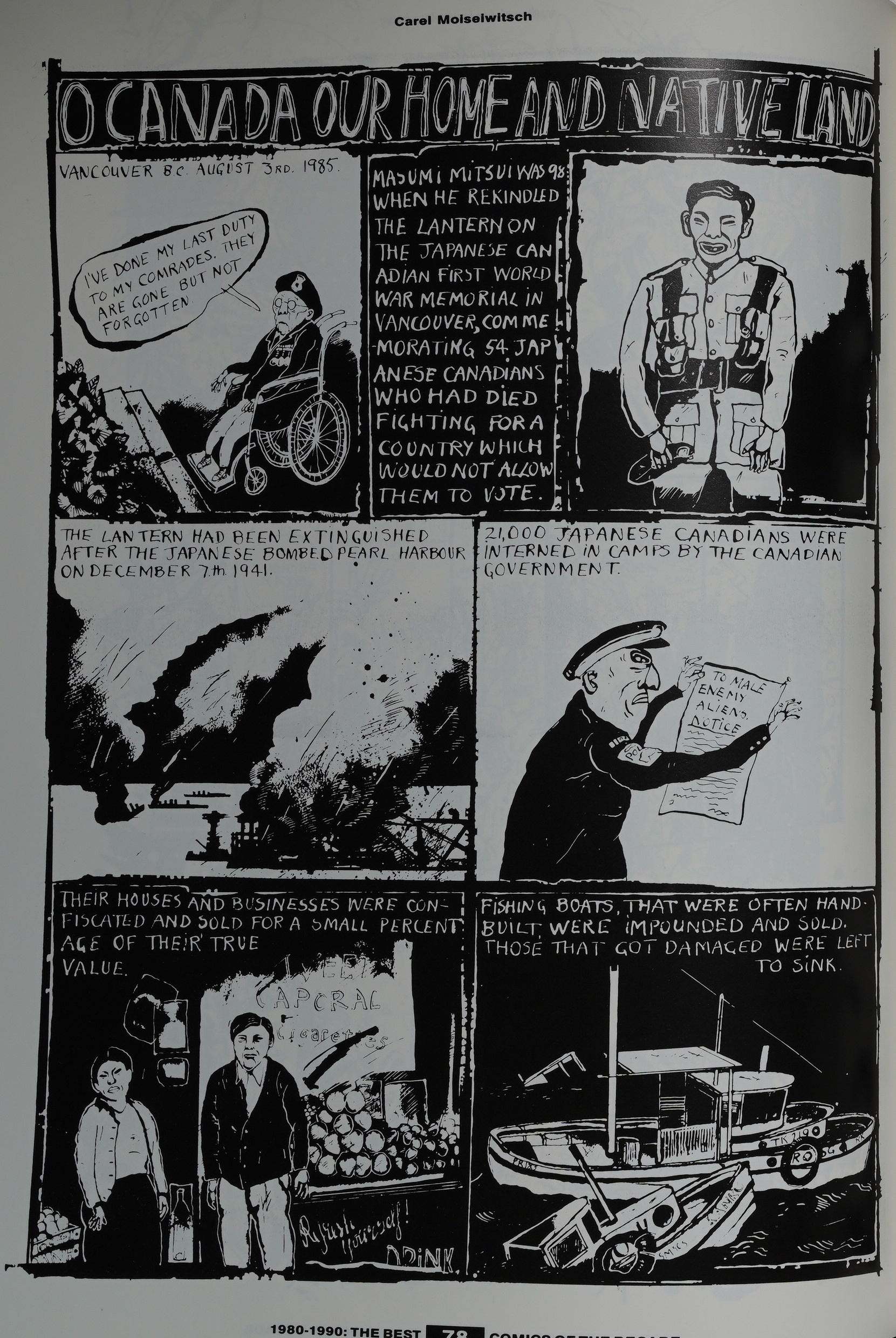 I was also expecting these books to be basically, wall-to-wall stuff from Weirdo and Raw. But there’s less than a handful of Weirdo pieces, and not more than a couple Raw pieces. Instead the editors seem to have gone out of their way to find pieces by great artists (Carel Moiseiwitsch here) that have appeared in out-of-the-way venues (Casual Casual here, but from all kinds of magazines and books). 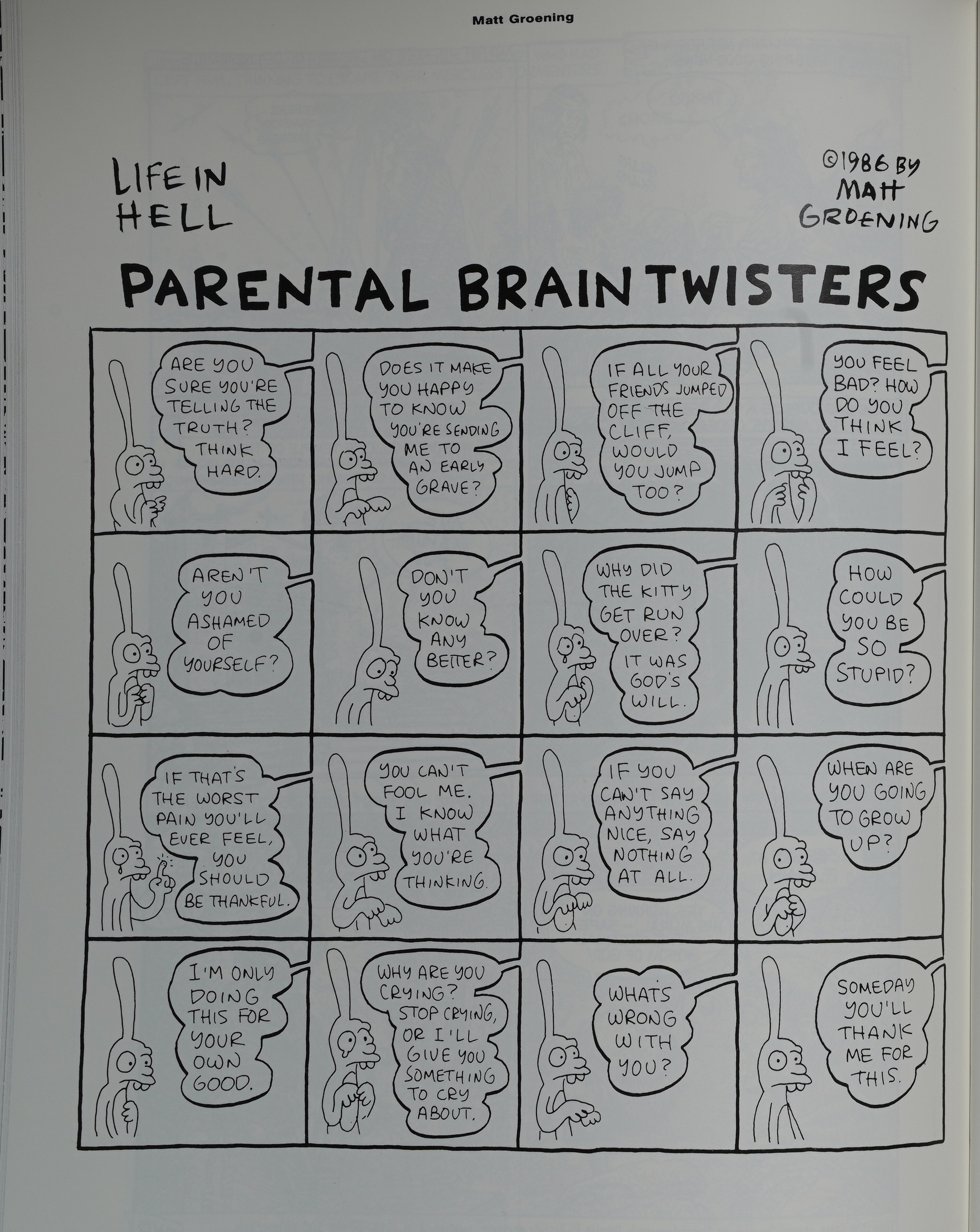 And you definitely can’t skip Matt Groening in a book like this.

Or Gary Panter. This book is printed on very shiny, white paper, which I don’t think really suits most of the work here… 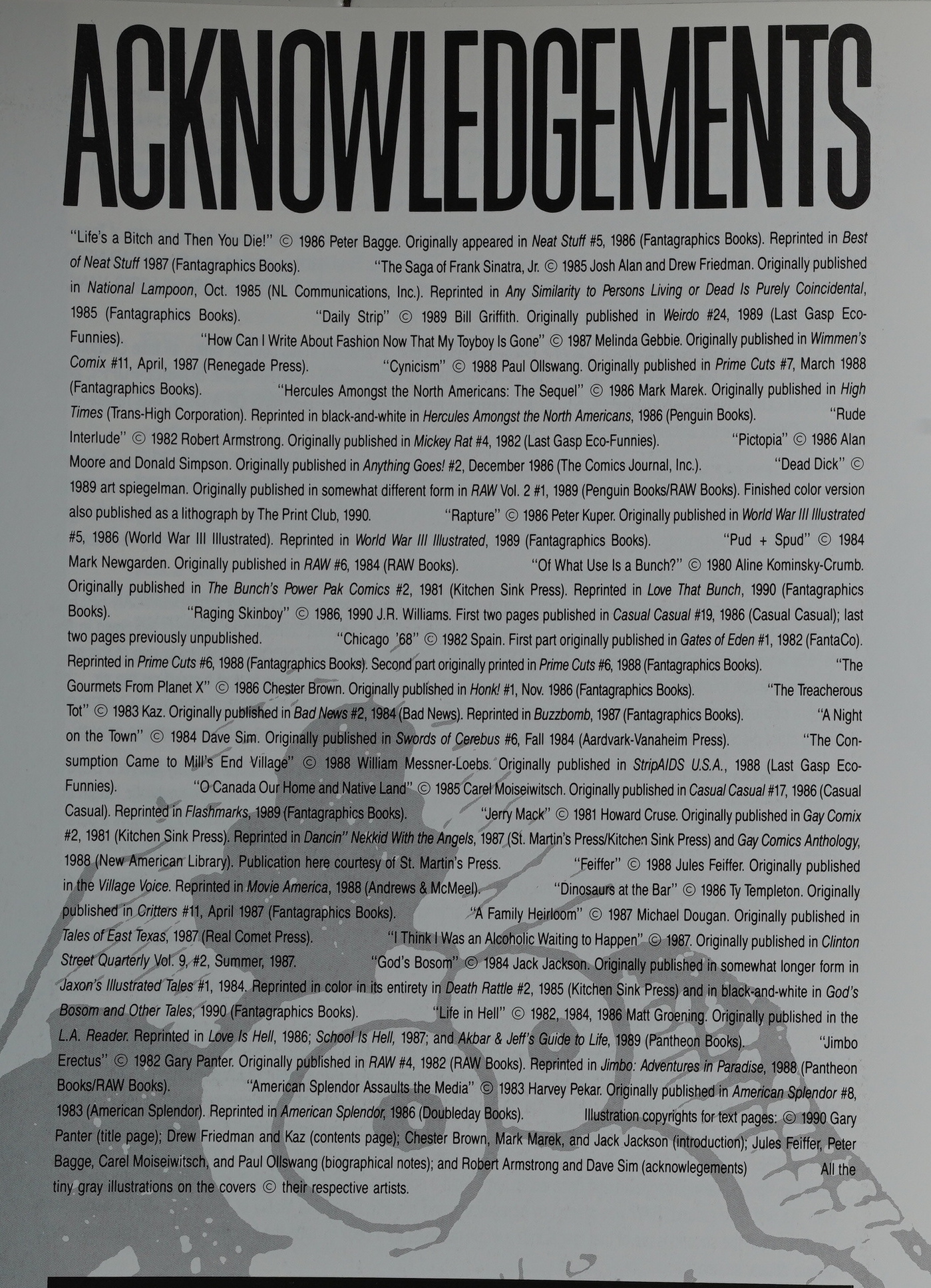 I appreciate that they tell us where all these things were picked from. 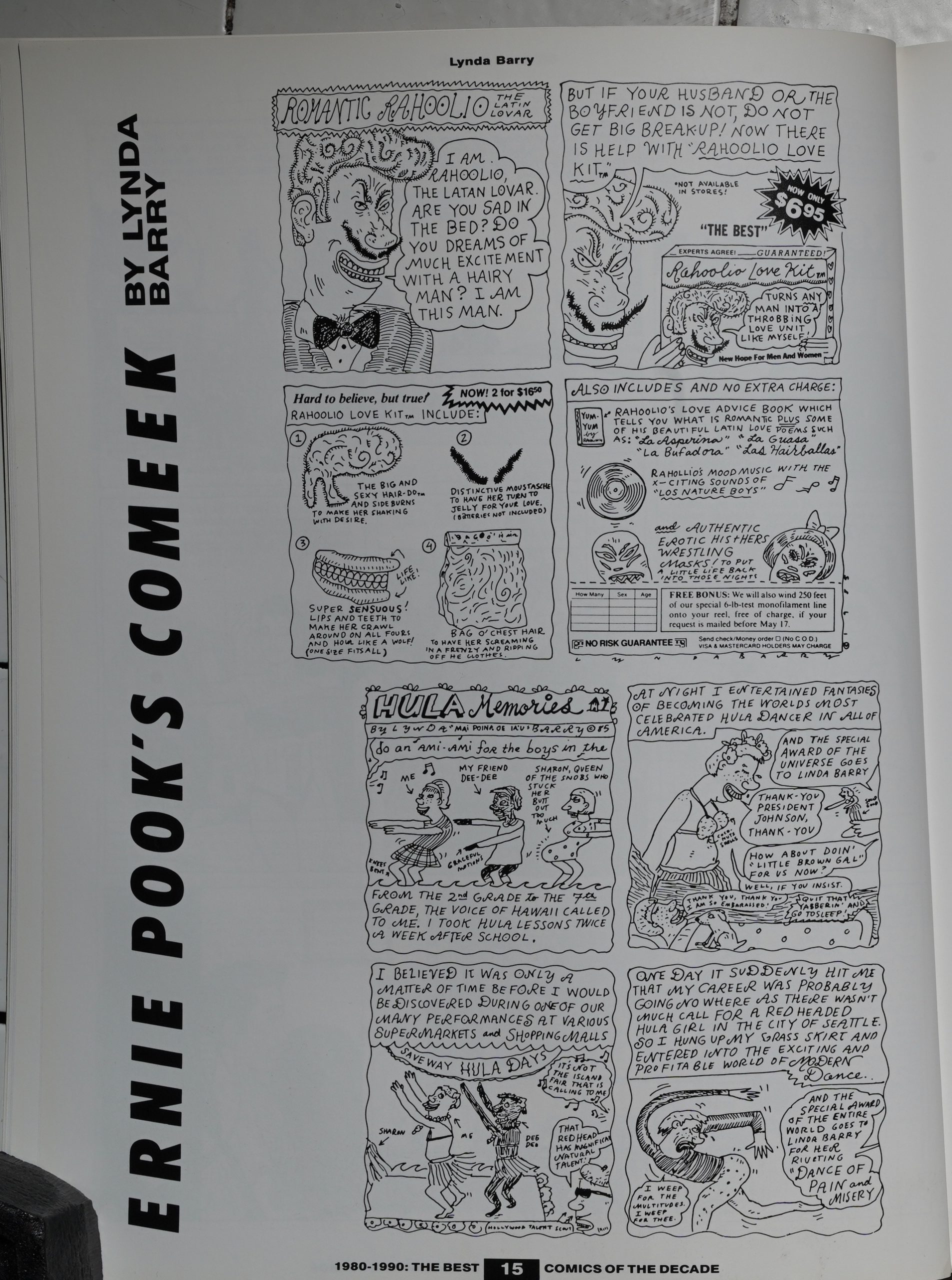 Perhaps not the best way to reprint Lynda Barry… 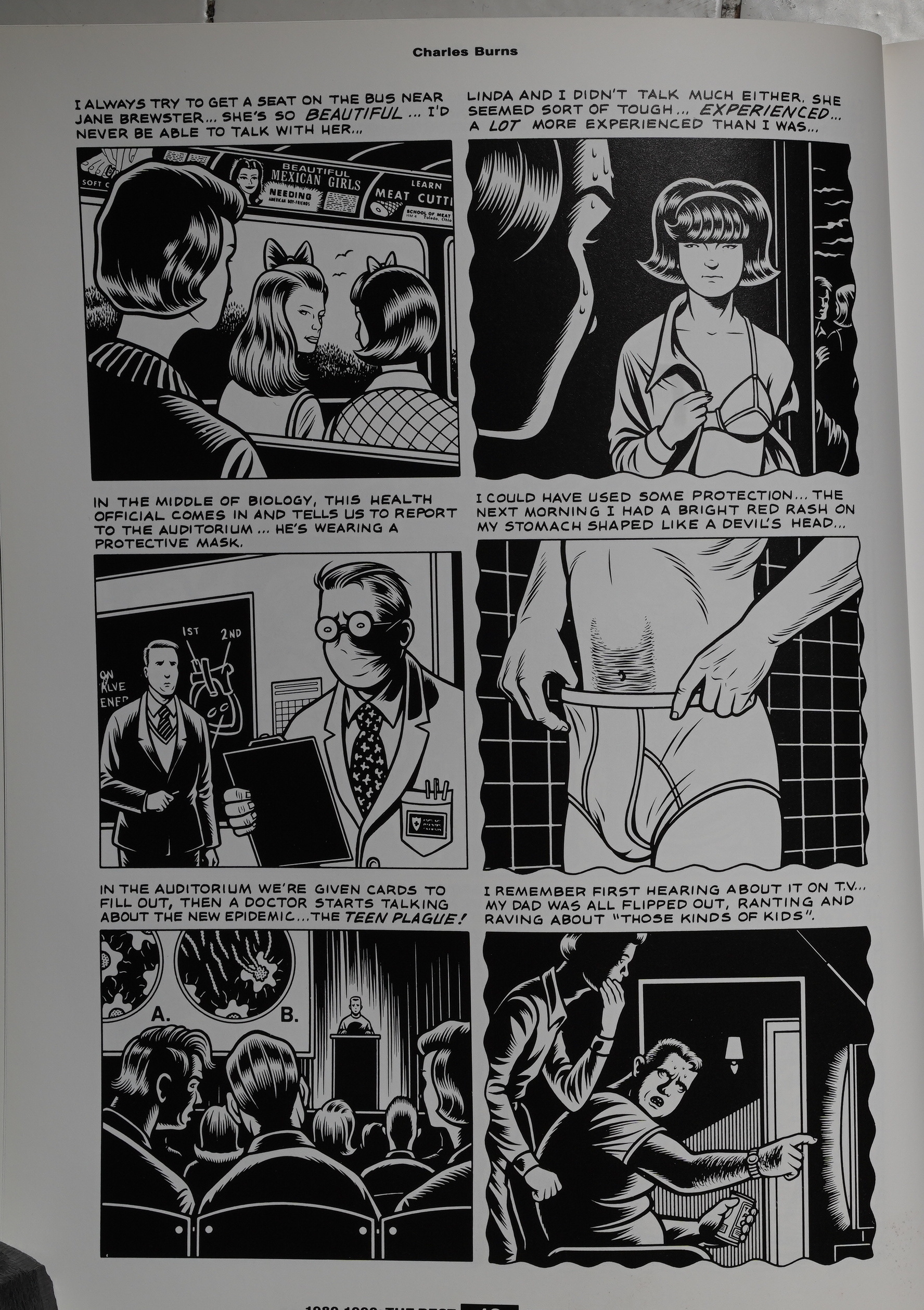 I’d say that basically everybody you’d expect to be here shows up. (Charles Burns.) There’s a few missing… the biggest oversight is perhaps Julie Doucet, who had published her mini-comic for a couple of years when this was released, but her breakthrough didn’t happen until 1991, so perhaps that’s understandable. 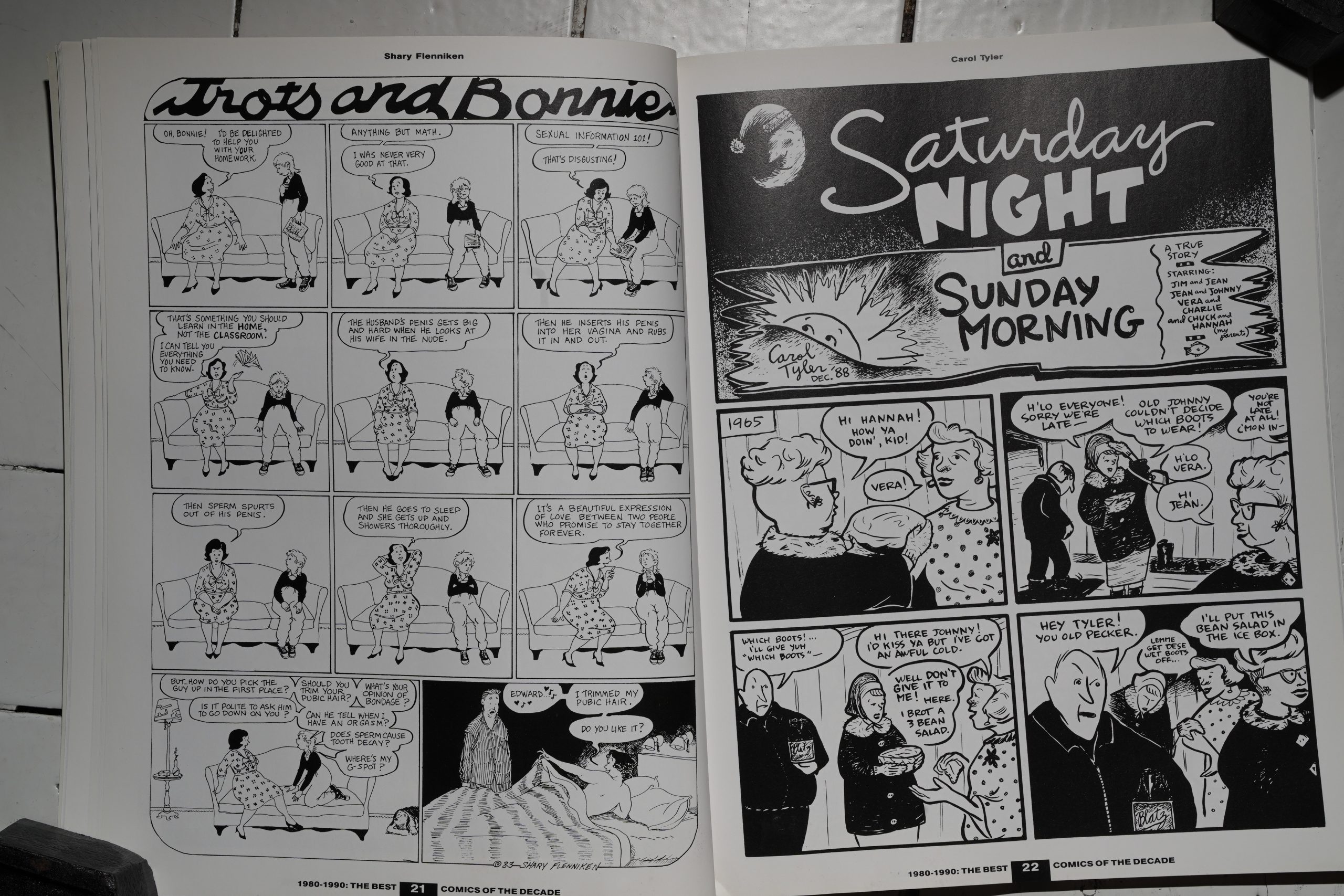 Mary Flenniken and Carol Tyler. I think I’ve seen that Tyler strip in a whole bunch of anthologies? It’s good, though, and short and self-contained, so it’s understandable.

There’s a good mix of longer and shorter strips, but sometimes it seems like the selection of strips is a bit odd. Why this Robert Crumb strip, for instance? It’s a very self referential piece, with Crumb ruminating on his career but…

It’s not like these books have been very coherent until this point, but the last half of the second book seems like a super random collection of randomness. 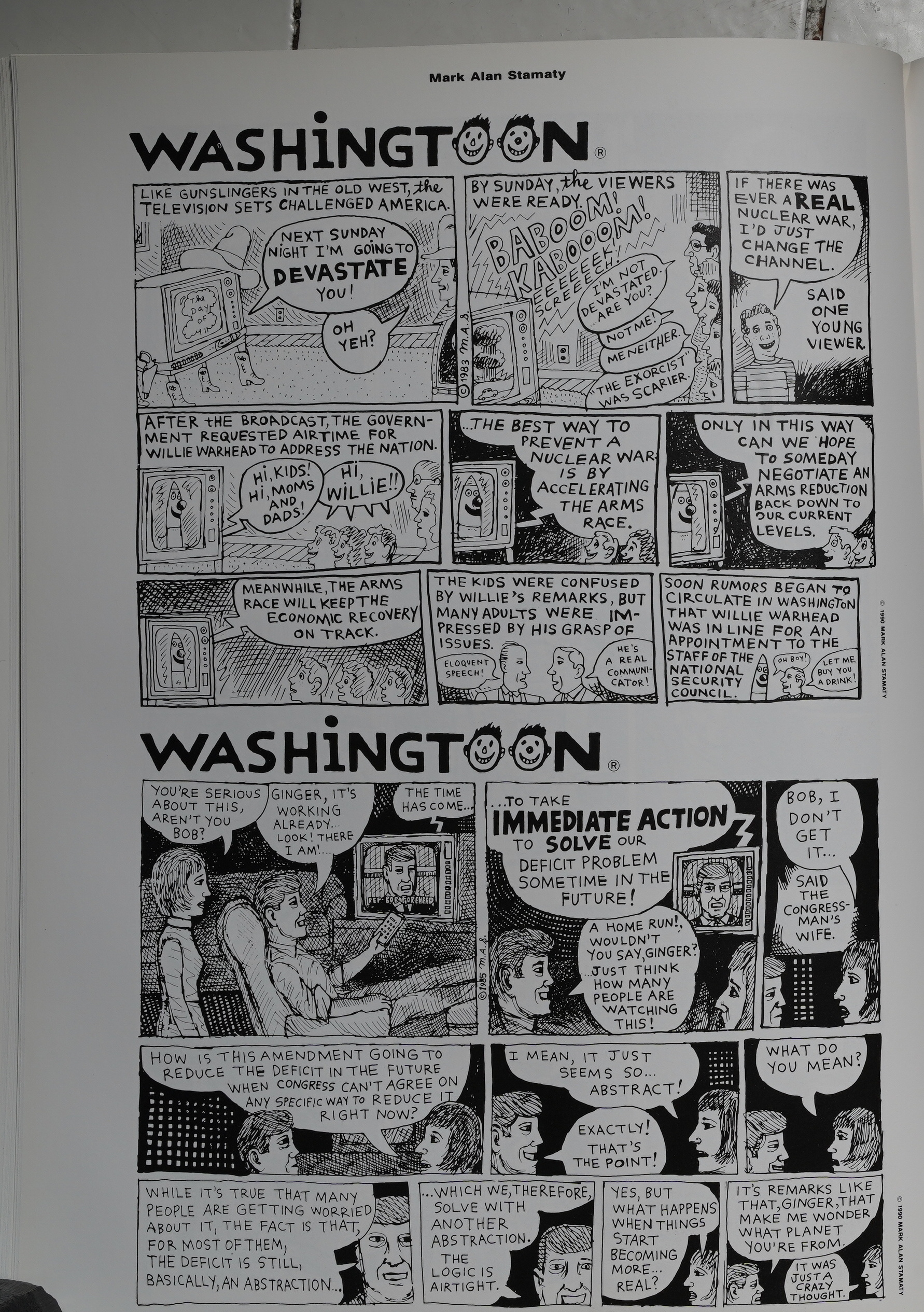 This is the only thing I’ve never read before: Washingtoon by Mark Alan Stanley, and… is this really one of the best things of the decade? Really? Kvetching about the deficit? 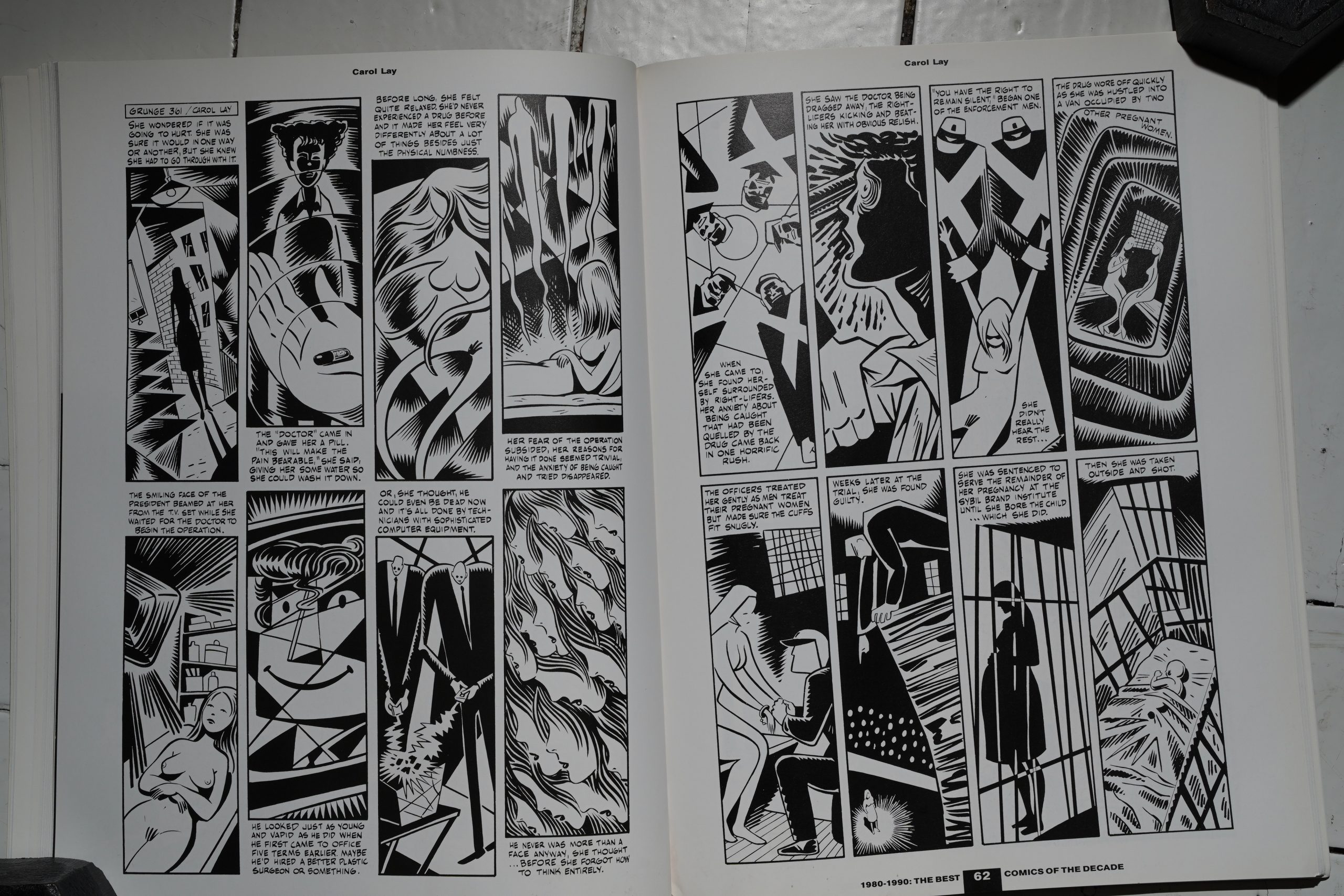 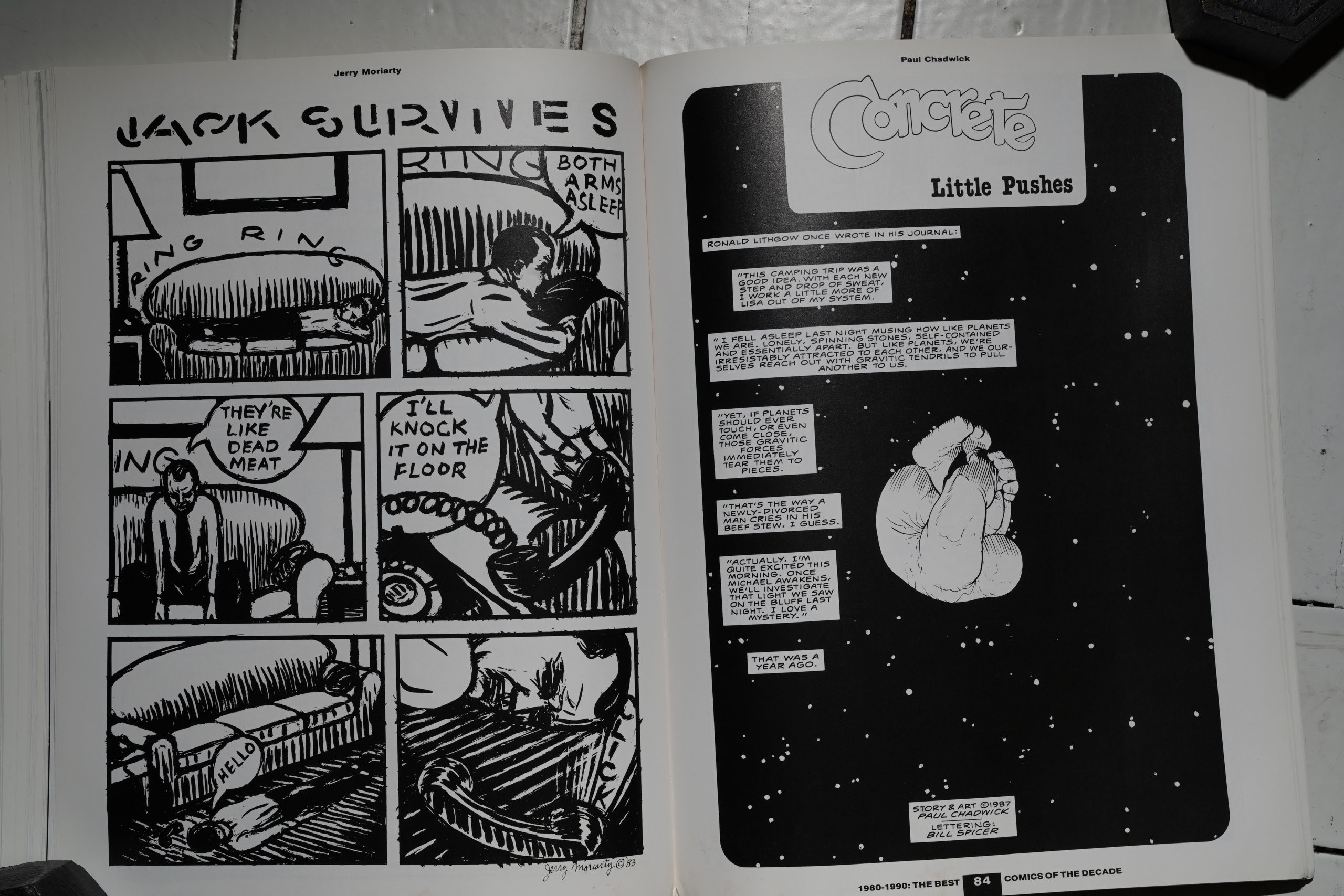 I can’t stress how utterly random the last half of the second volume is. Jerry Moriarty: Of course. Concrete by Paul Chadwick? What? I mean, I know that people used to like Concrete, but… what? 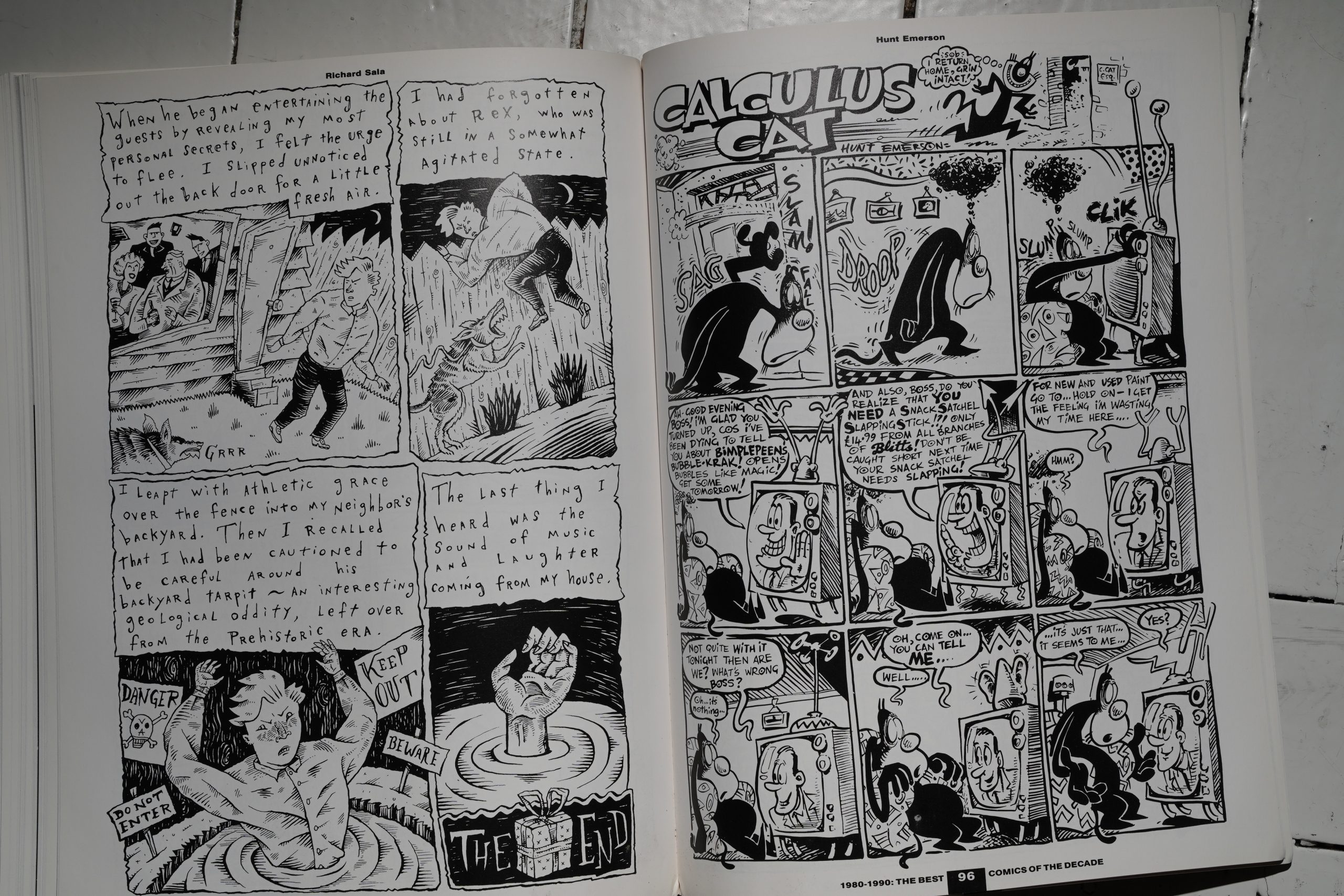 Fortunately, Congress instituted a law in 1986 making it illegal to publish an anthology without a Richard Sala piece in it. And then… Hunt Emerson? Well, that’s a piece that has never been published in North America before, so er whatevs.

So: These books are chock full of really good stuff. But perhaps they go on for about fifty pages too long: the books kinda taper off in essentialness (that’s a word).

Most of the major voices from the “punk comix” er “movement” are represented here, but not with their most striking work, and most of them seem to be grudgingly included — including just a single page of Jerry Moriarty, for instance, just seems absurd. And no Ben Katchor, or Sue Coe, or Paul Karasik, or Jayr Pulga, or…

But that’s fine — these books reflect the aesthetics of the editors very clearly: Chatty, clear narratives, politics and jokes. Traditional comics from an Underground tradition.

Rtwtws
THE BEST COMICS OF THE
DECADE VOL. 2
Written and illustrated by VARIOUS; edited
by GARY GROTH, KIM THOMPSON and
ROBERT BOYD. Published by
FANTAGRAPHICS BOOKS

The Hernandez brothers, Lynda
Barry, Robert Crumb, Rick Geary,
Eddie Campbell, Dan Clowes, Will
Eisner, Sergio Aragones, Carol Lay,
Paul Chadwick, David Boswell, Dori
Seda.. .and much more! What more
needs to be said? The quality of this
book is self-evident.
So—rather than analyzing the work
itself, I’d like to say a few things about
the nature of the beast. Any time
anybody says that they’re presenting
” they’re in for a lot
“The Best Of..
of debate, so the claim that these are
the best comics of the ’80s is naturally
problematic. Firstly, these are gener-
ally comics of a similar. sort—the
offspring of the undergrounds of the
’60s and ’70s (a Concrete story is the
closest thing to “mainstream” or more
traditionally-produced comics here)—
implying that what might be called
“avant-garde” comics is synonymous
with “the best.” The two terms are not
necessarily synonymous.
While these comics are unquestion-
ably among the best of the decade and
blow away most of what might be
considered more “mainstream” com-
ics, certain types of comics of undeni-
able quality are underrepresented (say,
perhaps, as way of example, Don
Rosa’s Disney stories, or Watchmen).
I’m not really arguing with the editors’
opinions here, but I’m trying to inform
you, the consumer, about what you’re
buying. If you wish a more descriptive
and less evaluative title, I’d call this
Cutting Edge Comics of the Decade.
Also, in some ways, this isn’t really
a selection of “the best” comics as
individual pieces of work so much as
it’s a sampler of these creators’ uorks.
It seems the editors sat around and
said, “Okay, who are the best cre-
ators?” rather than “Which are the
best pieces?” Certainly, it would be
impossible to choose the one R.
Crumb piece that is his “best” above
all others produced in the ’80s, for
example. And perhaps one could
argue that many R. Crumb pieces are
better than any Jim Woodring piece,
yet the two creators receive equal
representation.
So—what this really is is a
compilation of representative works of
some of the finest and most progres-
Sive comics creators of the decade. It
is an important collection. I think the
best audience for this is those who are
unfamiliar with these creators and
would like (or need) a comprehensive
introduction to the cutting edge of
comics today. And pick up Volume
One as well. There, you’ll find Dave
Sim, Bill Griffith, Alan Moore, Art
Spiegelman, Harvey Pekar.. .the
names speak for themselves.

BEST COMICS OF THE
DECADE VOL. I
Written and illustrated by VARIOUS; edited
by GARY GROTH, KIM THOMPSON and
ROBERT BOYD. Published by
FANTAGRAPHICS BOOKS
There’s so much genuinely good uork
in Best Comics of the Decade Volume
I that I have taken an unorthodox step
to cover my ass: several remarkable
stories and creators have been pur-
posely omitted from this review.
If I attempted to quantify and com-
pare the excellence of work by a
diverse group that ranges from Jules
Feiffer to Mark Marek to Jack Jack-
son, my omissions would speak as
loudly as my selections. As the Acad-
emy of Motion Picture Arts and Sci-
ences knows well at Oscar time,
choosing the best of the best sucks.
Therefore, I’m going to “Do the Right
Thing” here.
Some of the best (but not all!) of
Best Vol. I include:
—”Pictopia” by Alan Moore, Don
Simpson, and three other good folks,
a 13-page fable about the horrors of
continuity and the new mainstream
that should give Marv Wolfman in-
finite crises of guilt.
“Rapture” by Peter Kuper, an il-
lustrated transcript of a Jerry Falwell
sermon that is more damning than
any. laying of hands sessions with
fallen women.
—”O Canada Our Home and Native
Land” by Carel Moiseiwitsch, an
indictment of that country’s war
crimes against Japanese-Canadians
during World War II. Comics jour-
nalism and advocacy at its best.
“Raging Skinbw” J.R. Williams,
a wordless narrative that peels under
the epidermis of the “glamorous”
world of intoxication.

Though many will gripe at the
omission of mainstream “field hands,”
as Groth is fond of calling them, a
nicer argument is that those wealthy
and beloved folks don’t need the
publicity the way some of Best’s less-
er-kncywn contributors do. A less nice
argument is that mainstream creators
don’t explore new territory and expand
the medium, preferring to remain on
more familiar, well-trod, well-paying
ground.
The least nice argument is made, of
course, by Groth and Thompson in the
Introduction: “Virtually none of the
best examples of comics appeared in
the standard, tacky, four-color super-
hero pamphlets where pungent new
condiments (sex and gore, glossy
paper, higher prices, and glib nihil-
ism) never quite managed to obscure
the stench of 50-year-old ideas—
which hadn’t been all that fresh to
begin with.”
So there. A good vocabulary and a
bad attitude can be an obnoxious
thing, but their traditional arrogance
is certainly well-deserved here.