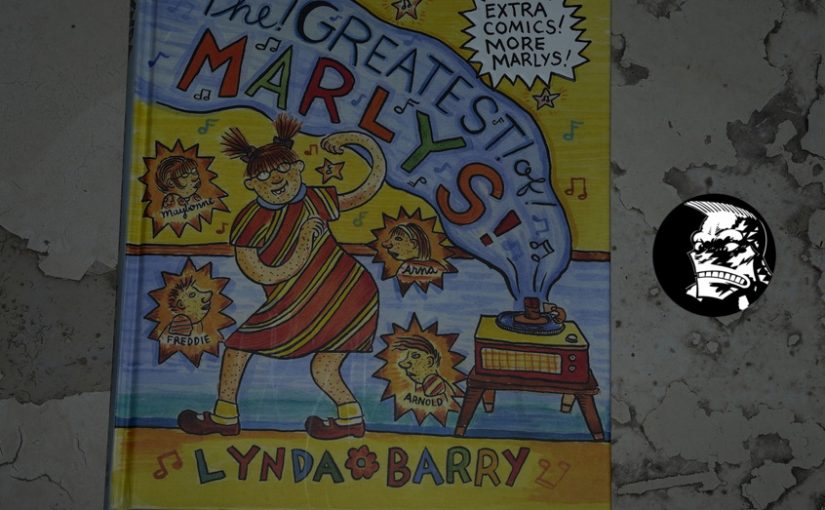 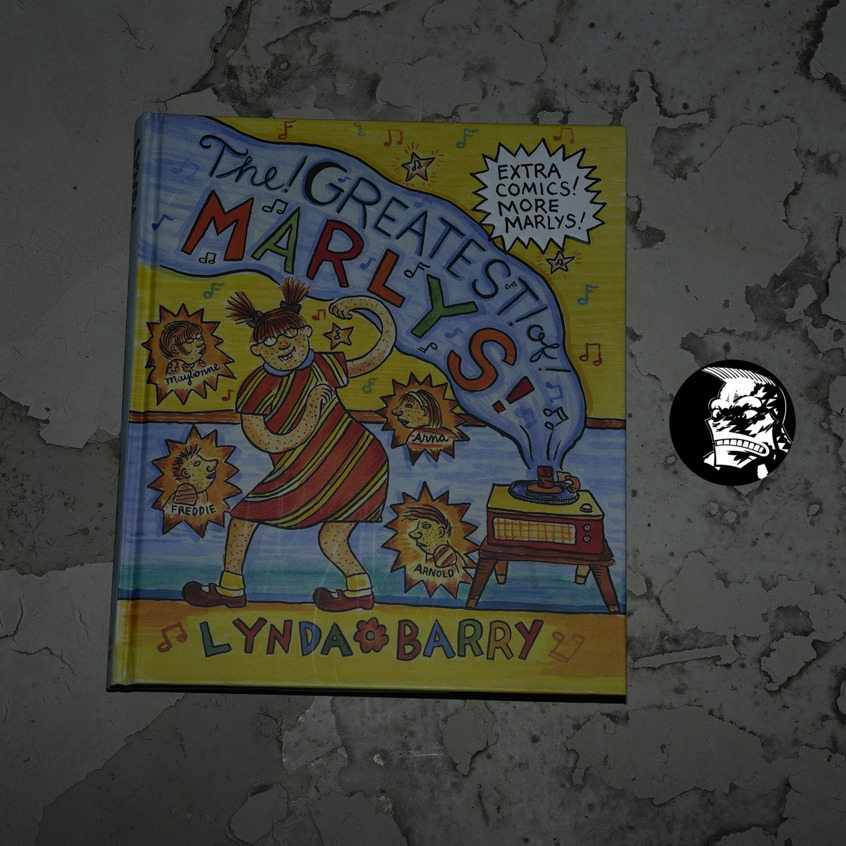 This was originally released in a smaller edition by Sasquatch Books in 00, but I’ve got the 16 edition from Drawn & Quarterly here. (I got rid of the earlier edition while weeding out duplicates the other year, and now I regret it. Sooo much.)

That edition was, according to Amazon, 224 pages, and this one is 248 pages. So it’s not that much extra. 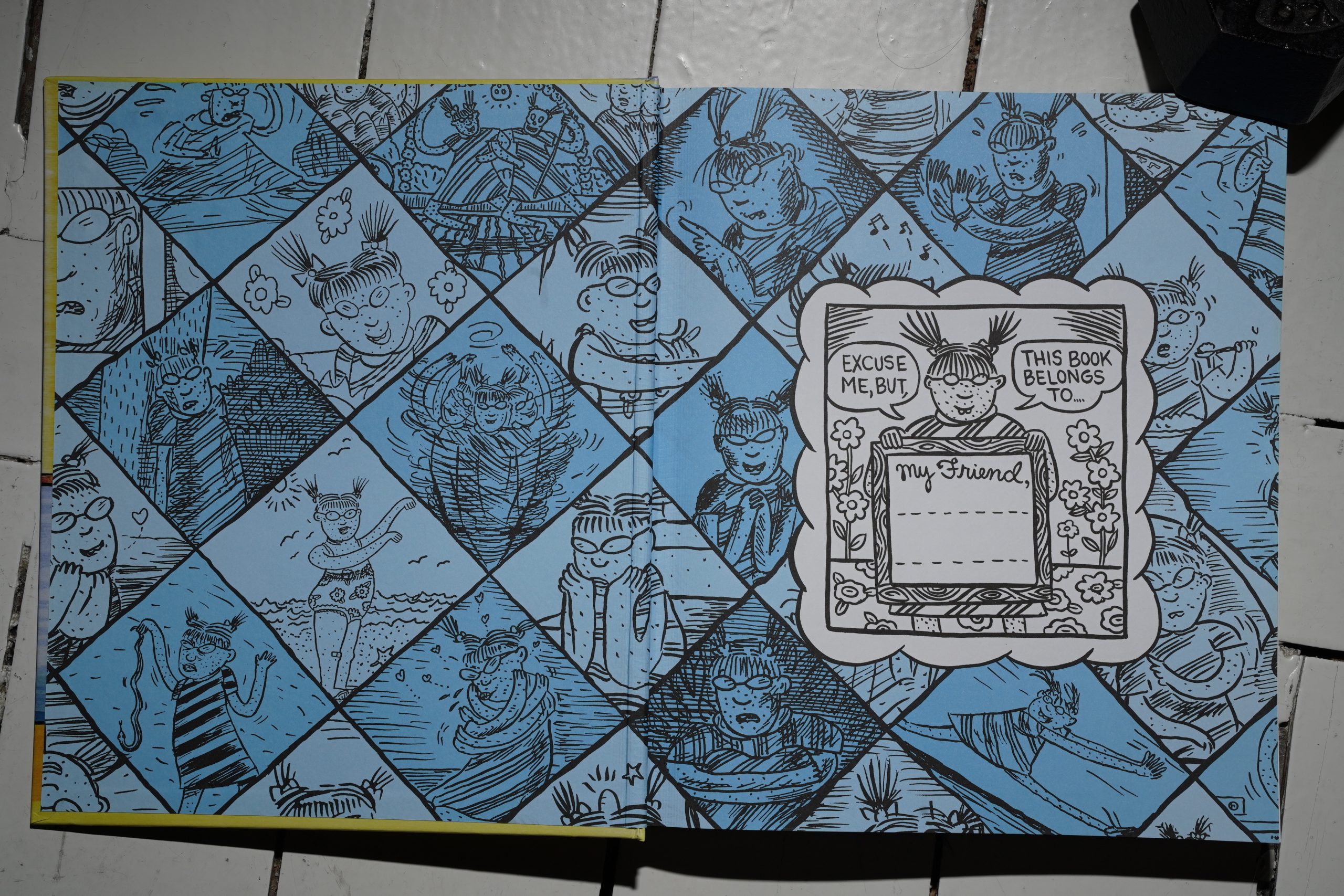 This is a quite handsome book — it’s pretty understated; no introductions by famous authors or anything… 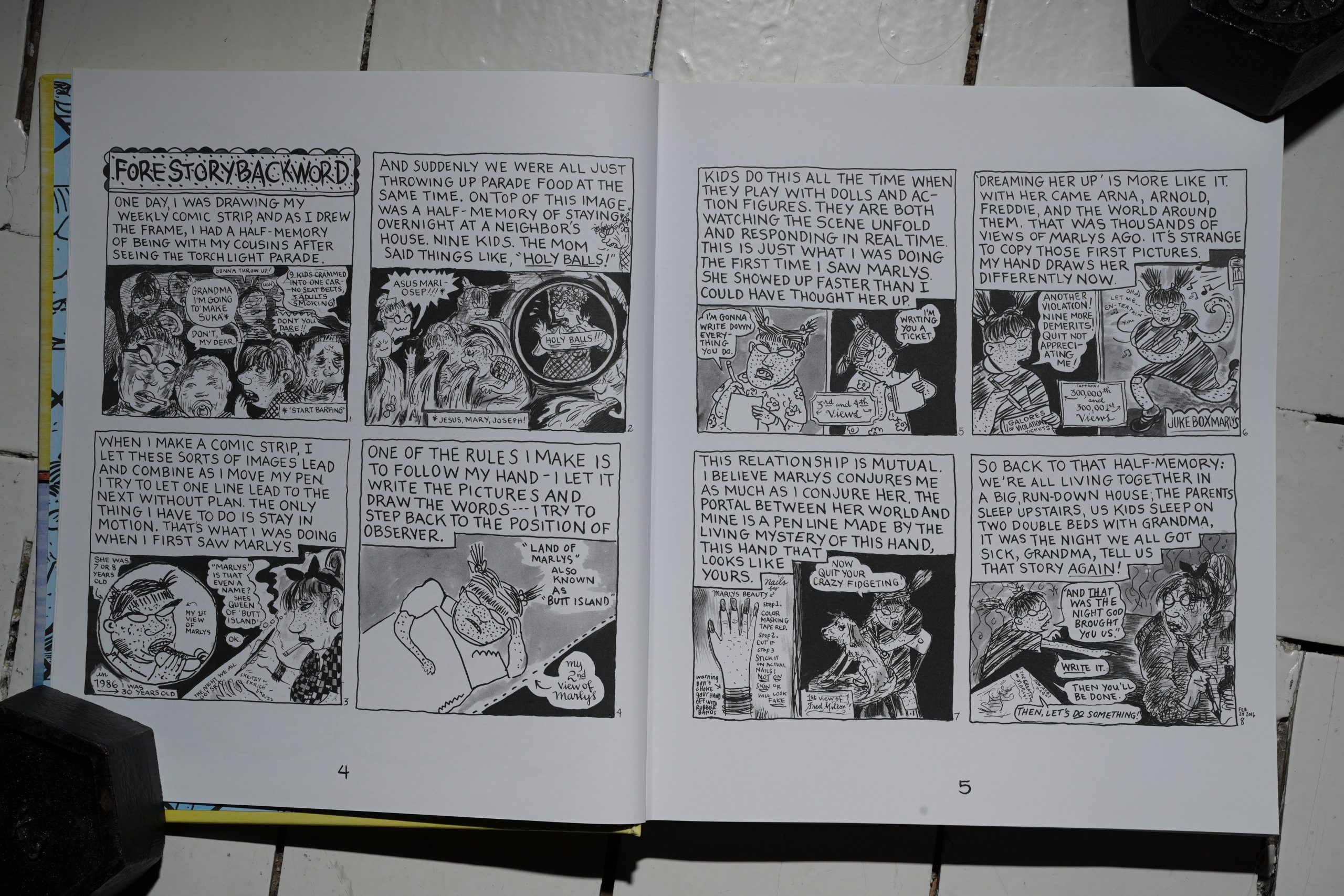 … just a two-page introduction by Barry herself, explaining how Marlys came to be. 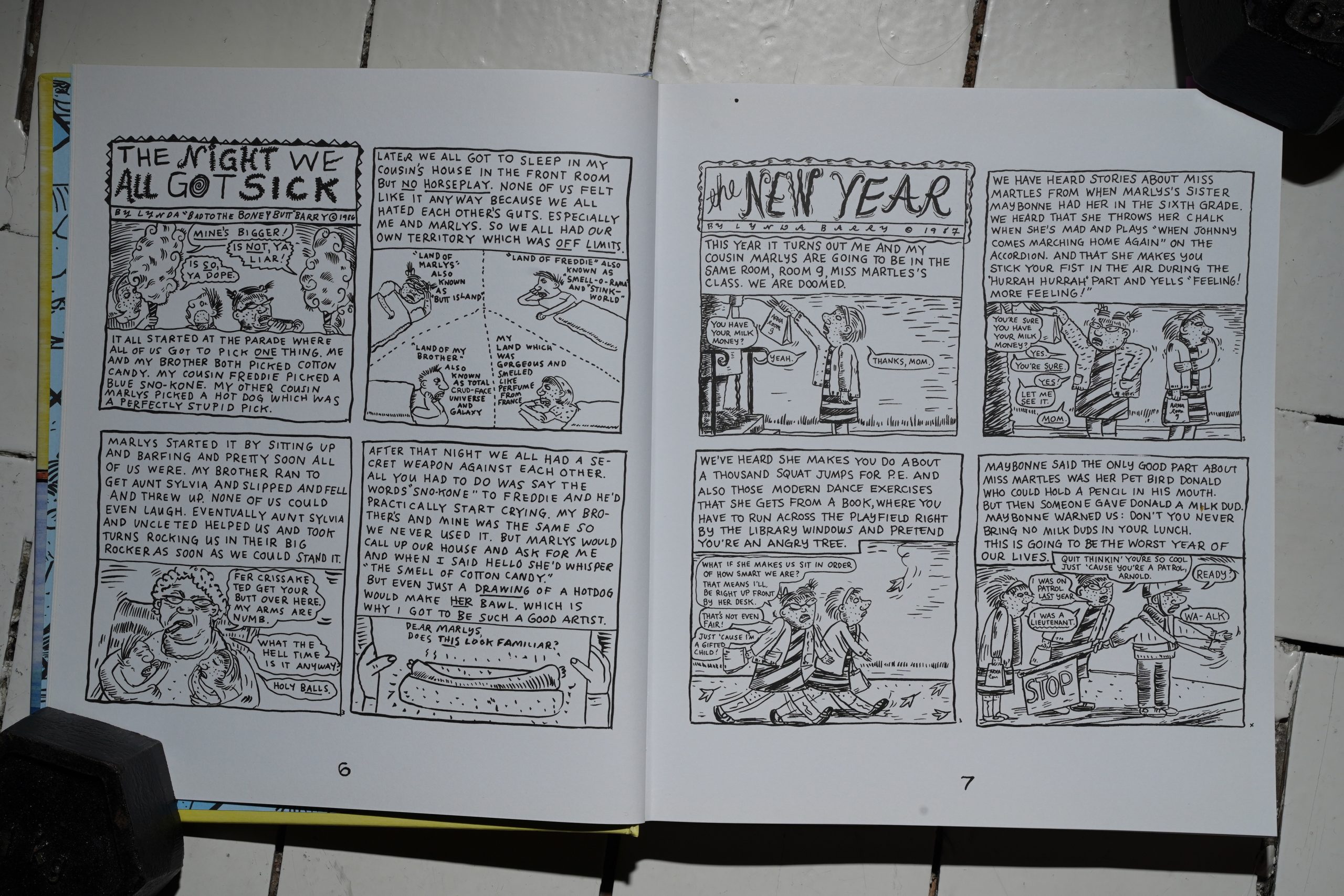 And then we get more than a hundred strips selected from the collections from the late 80s. There was one strip that I wondered whether was new (i.e., not reprinted before), but anyway — we’re getting most (all?) of the old strips that involve Marlys, but none that focus on the rest of her family from those books (in particular, none of the Maybonne strips). 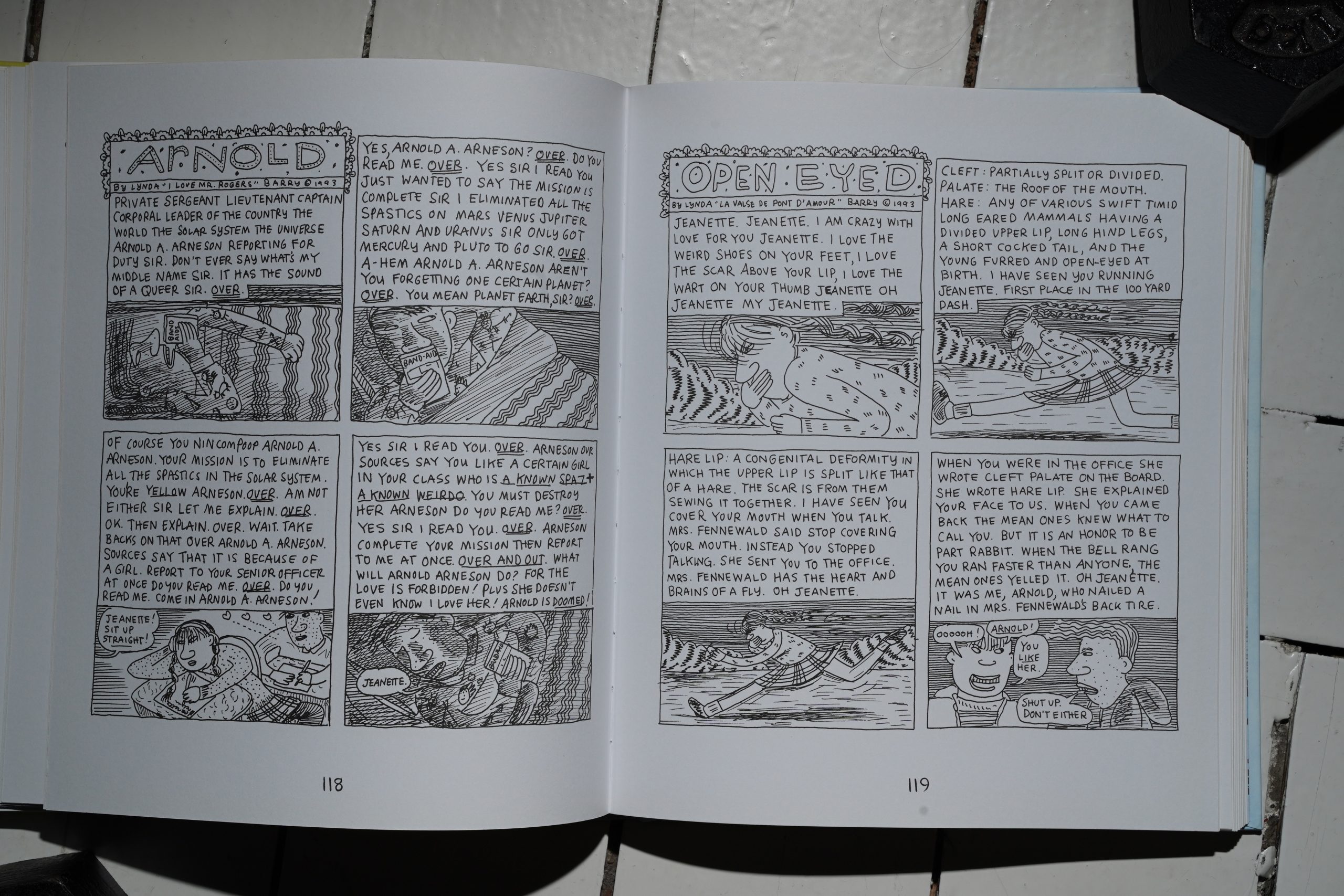 The final Harper Collins (published in 94) had strips (mostly) from 91 and 92… but this collection seems to pick up the reprints right where that book let up. So we get a bunch of strips from 93 and 94, but (confusingly enough) very few of these involve Marlys. Instead most of these are about Arnold (Marlys’ cousin).

I mean, I love finally getting to read these, but… why… stash them in the middle of a book collecting the Marlys strips? 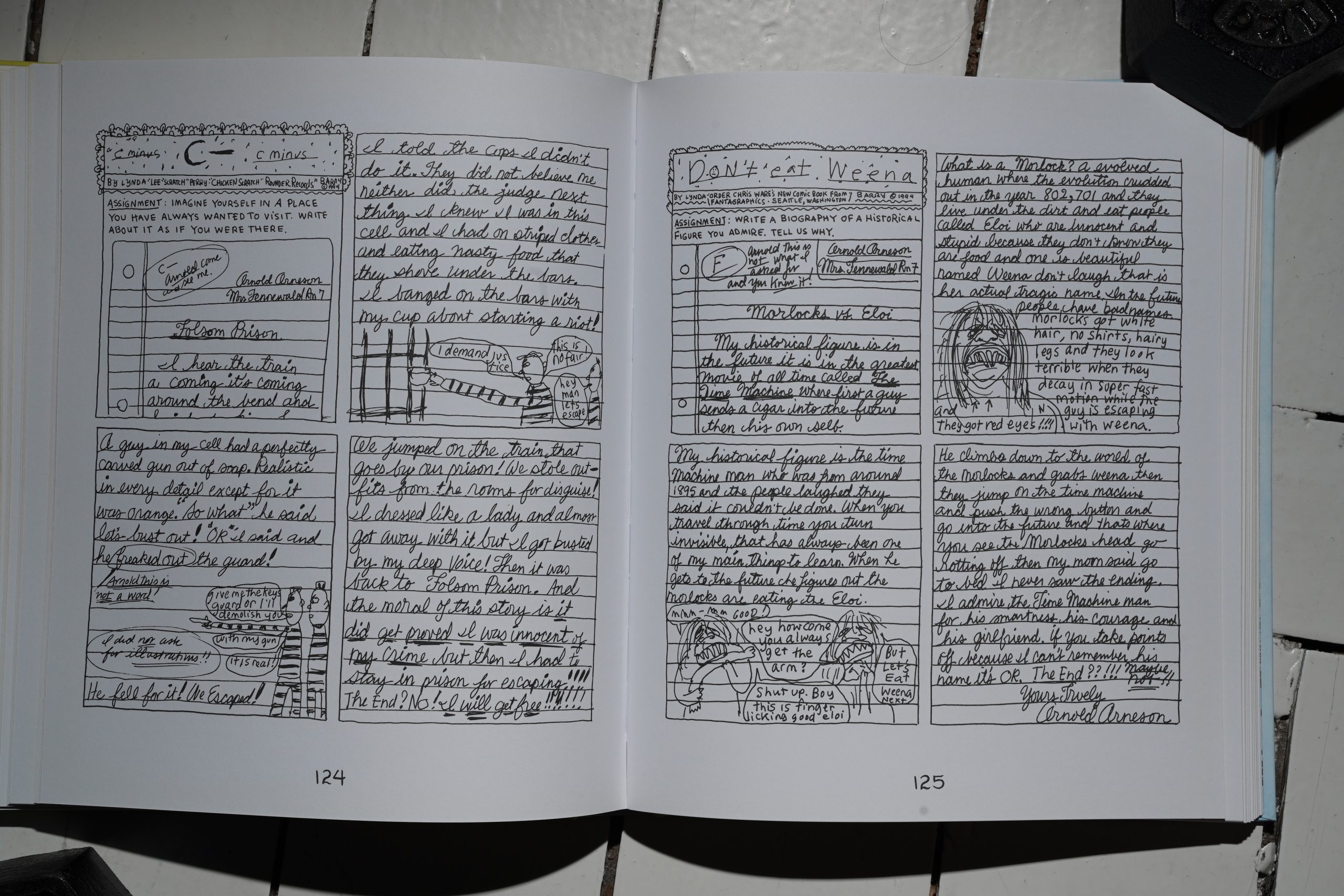 And then it becomes pretty clear — I think it would just be pretty difficult to get a publisher to do a stand-alone book collecting these strips. Barry like experimenting with different approaches, but many of these strips feel pretty dashed off. They’re not graphically attractive (which is very unusual for Barry) and they’re not that gripping (which is even more unusual for Barry). 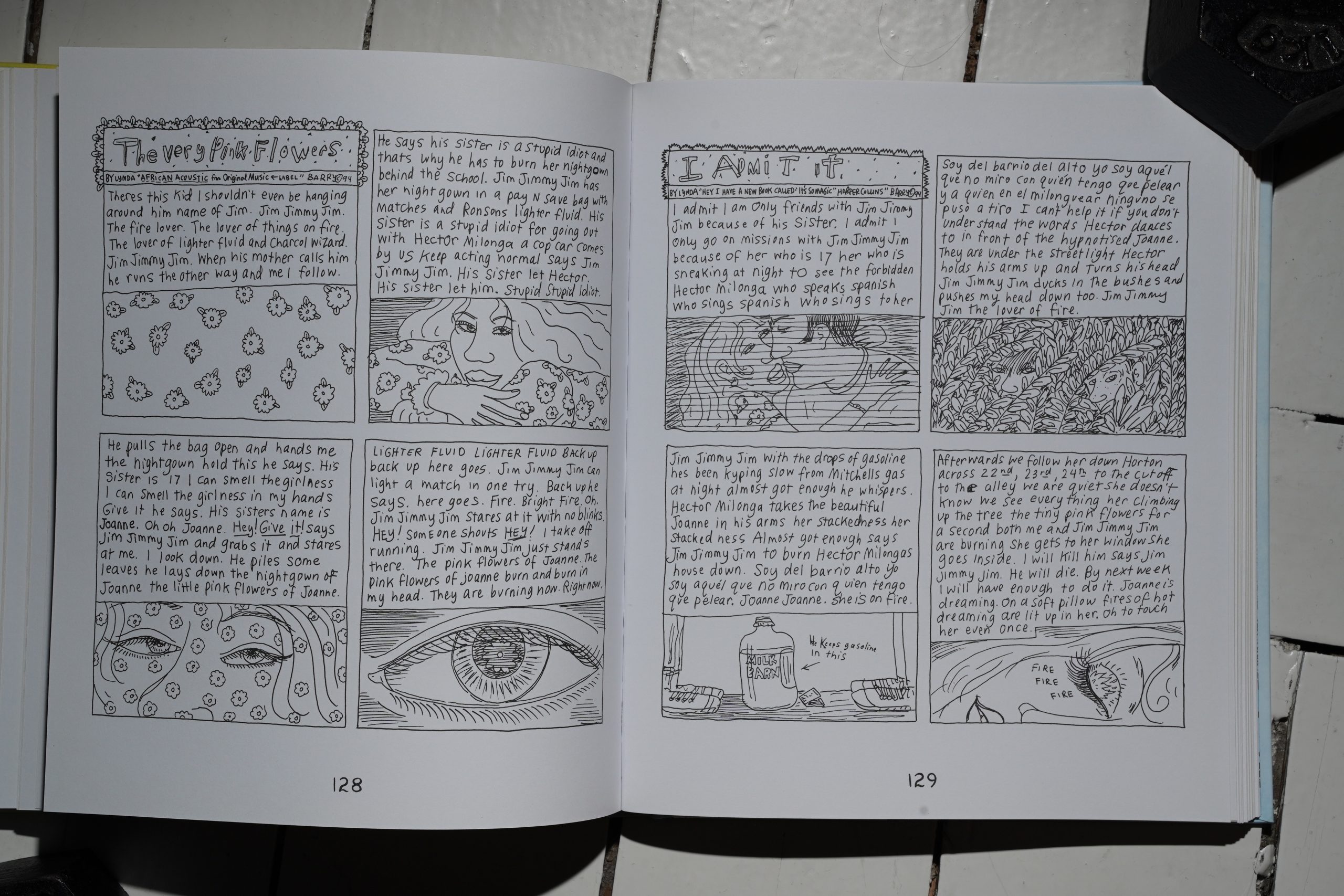 And then the strangest thing of all — the storyline (with Jim Jimmy Jim, the fire bug/killer) is the same as the one that was later printed as The Freddie Stories! But this first time around, it’s Arnold that’s involved with Jim Jimmy Jim and all that drama. 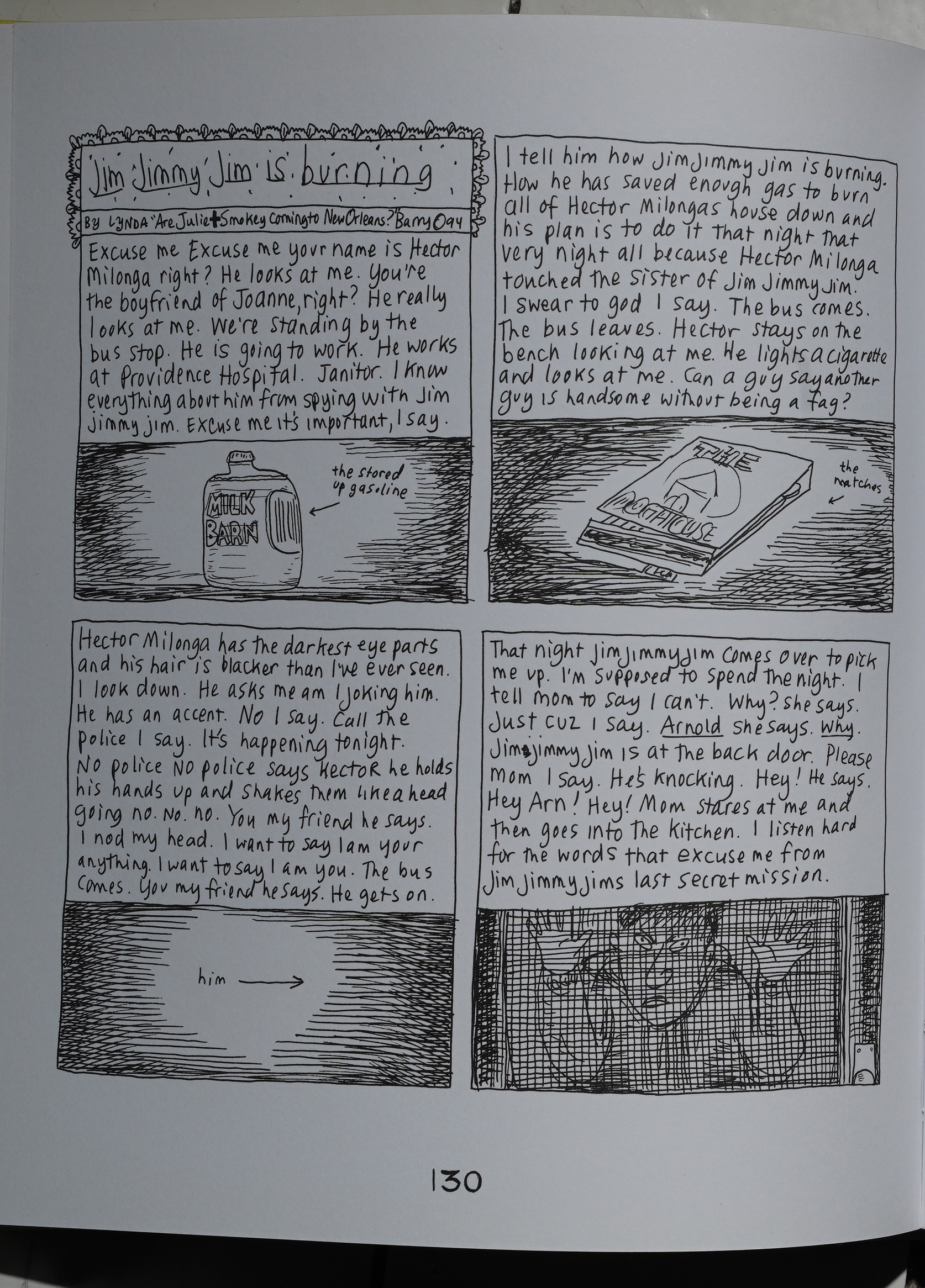 Was Barry just unsatisfied with the results? The storyline is sometimes repeated word for word, and it’s certainly more interestingly drawn in The Freddie Stories (here she seems do have ditched her brush and is just doing everything with a pen). 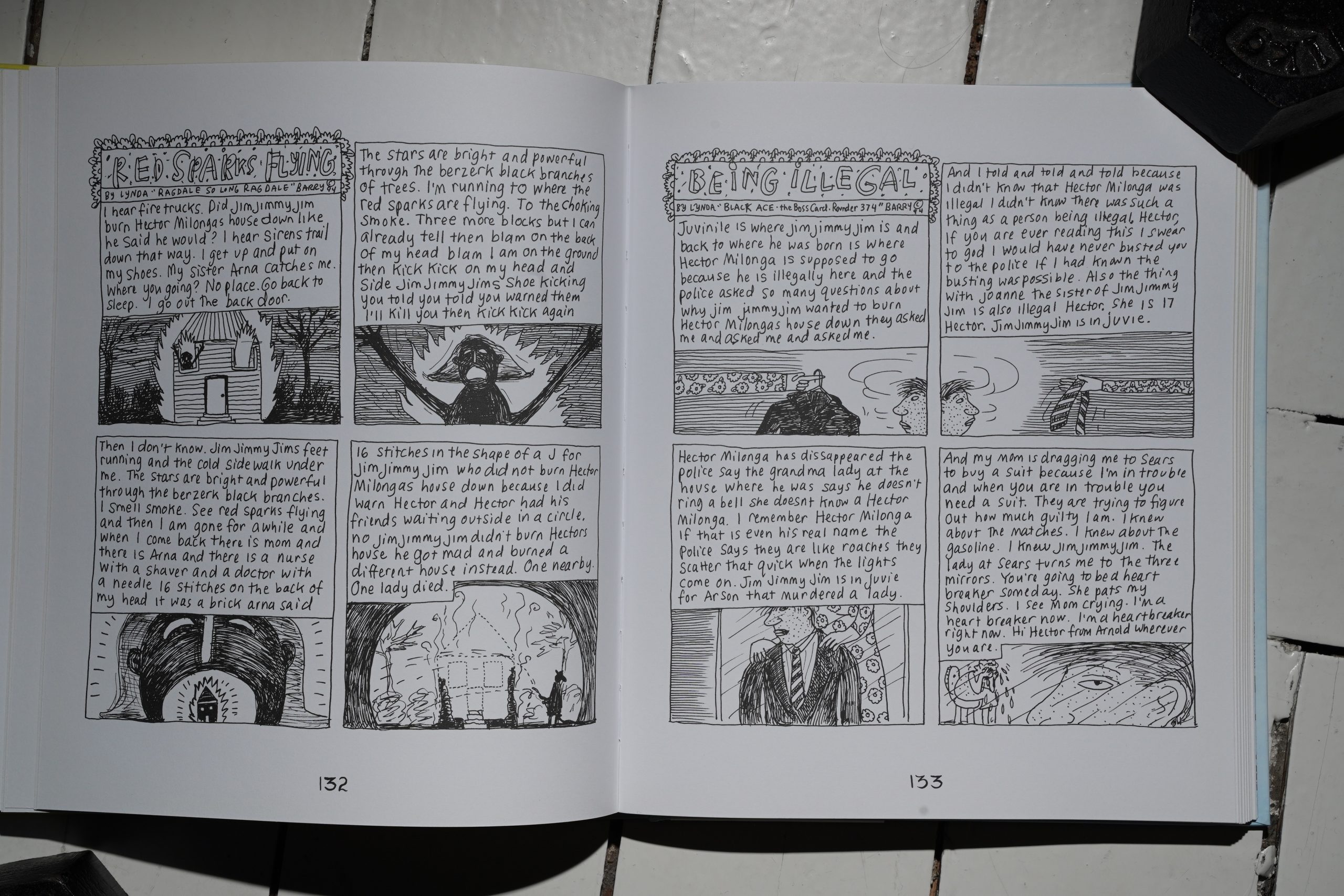 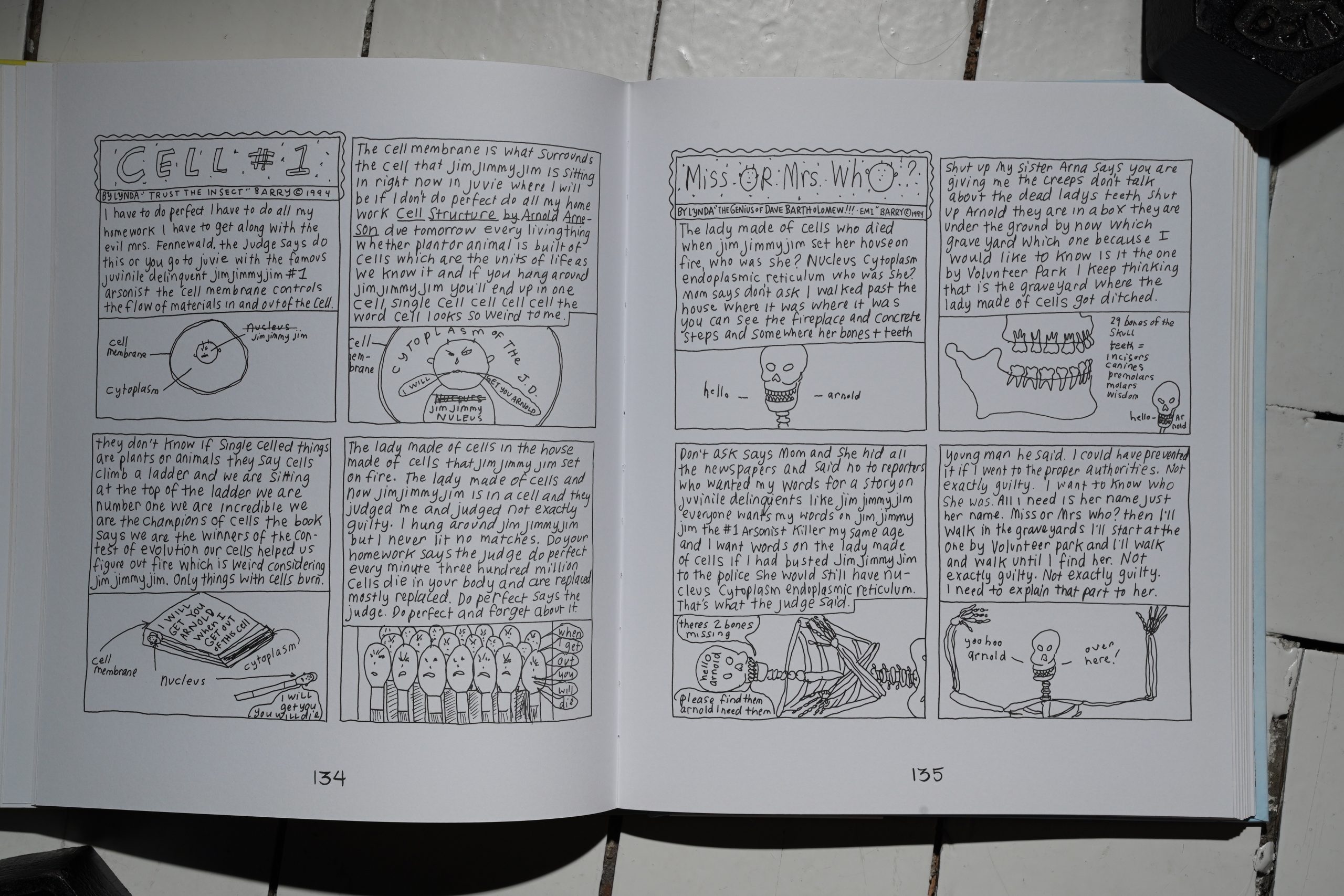 The artwork gets very basic indeed in parts. 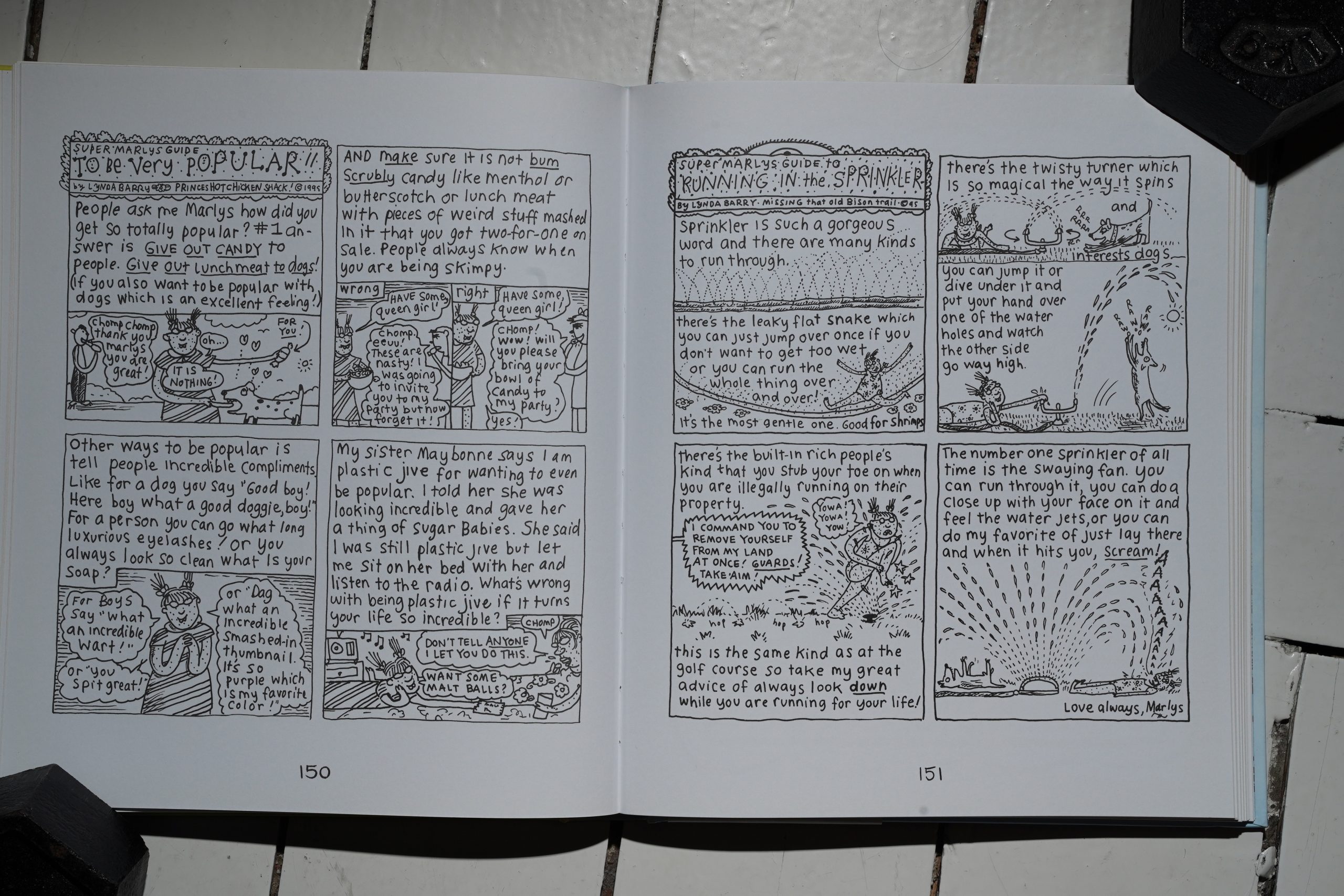 Then it bounces back a bit, but it seems like Barry avoided using a brush for more than a year. 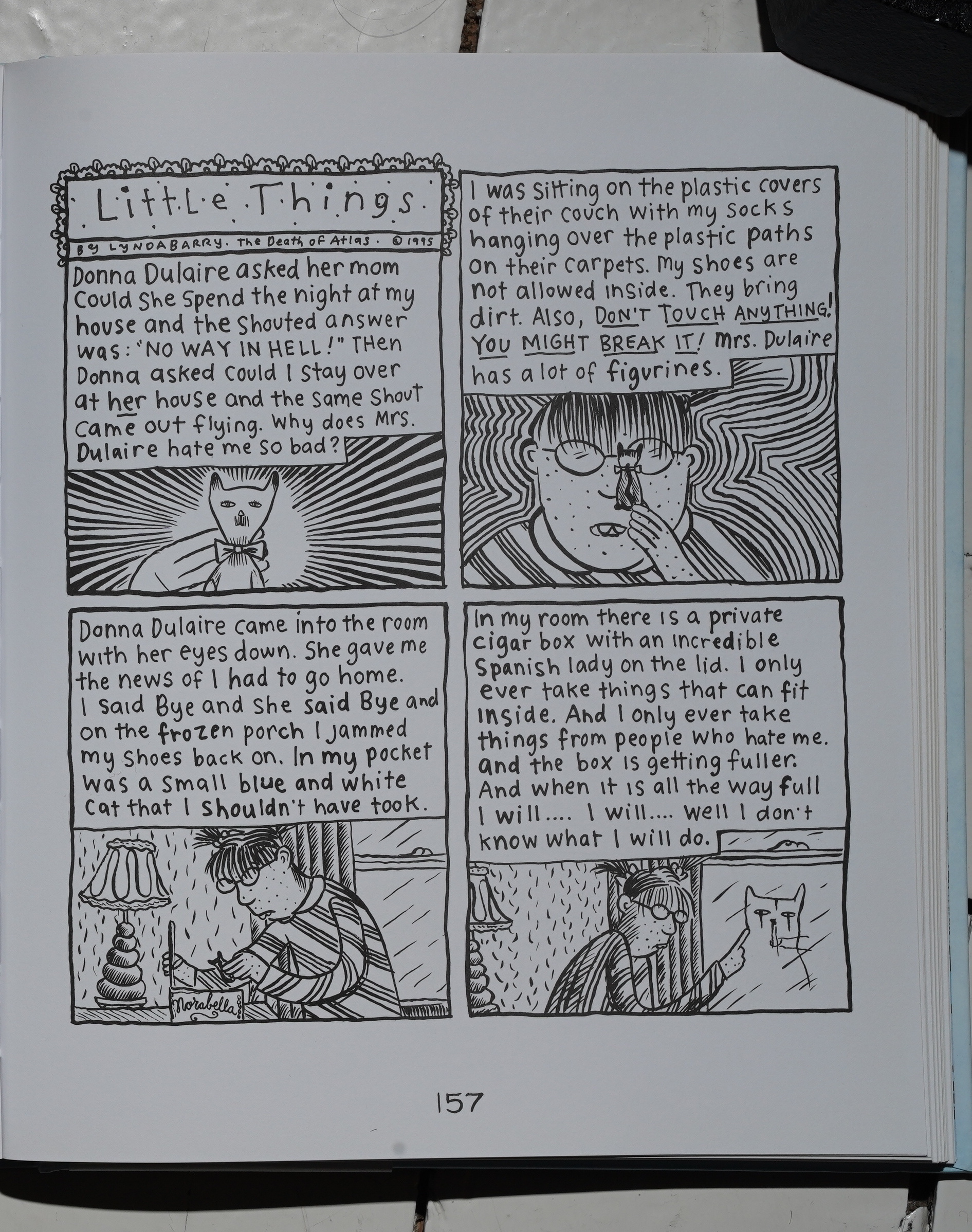 Then when it returns, it’s such a relief. But the storyline kinda evaporates and the characters start doing odd things. 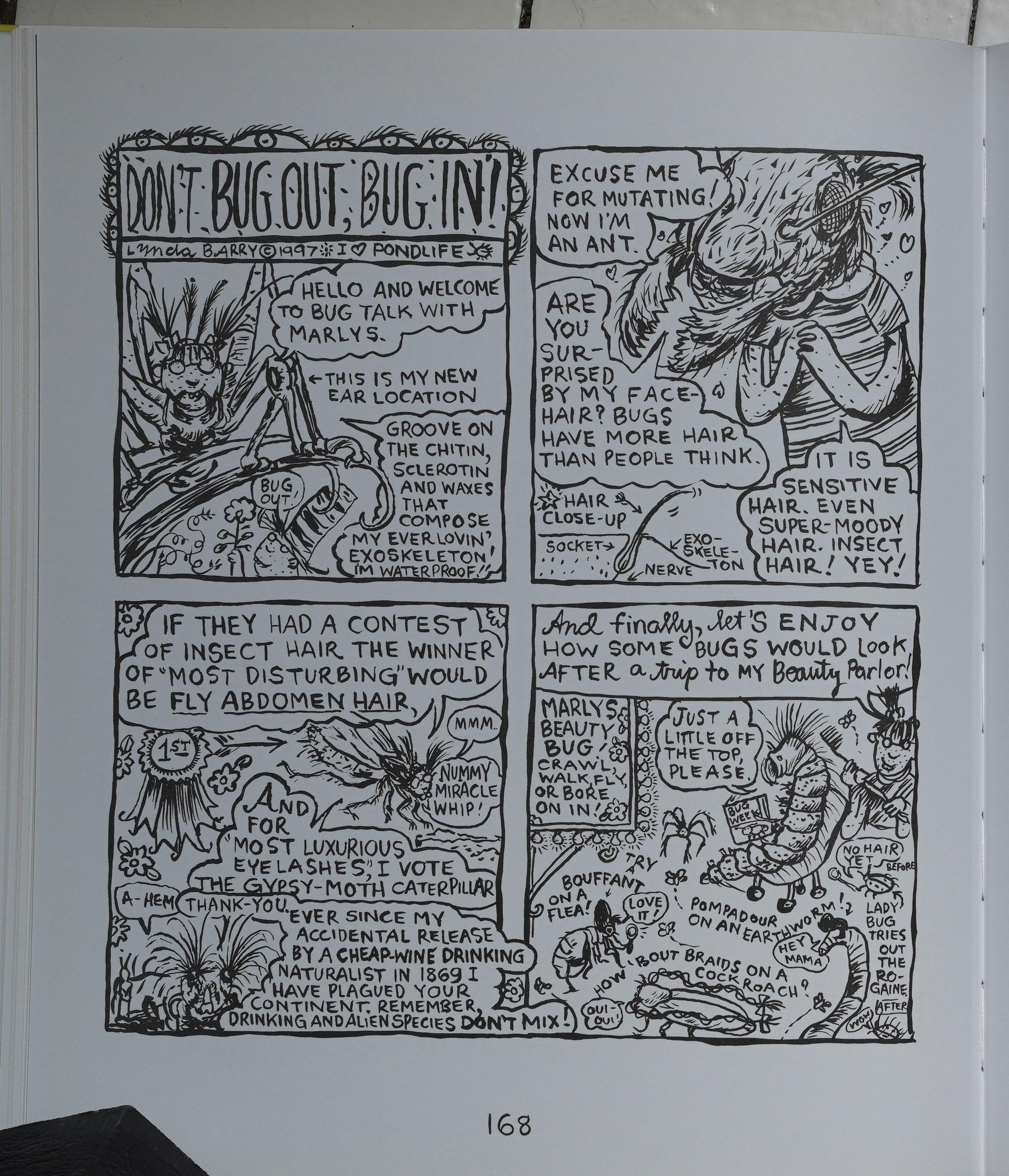 I’m guessing that Barry did other Ernie Pook strips in between the Marlysverse strips, but perhaps the two types of strips started blending together… 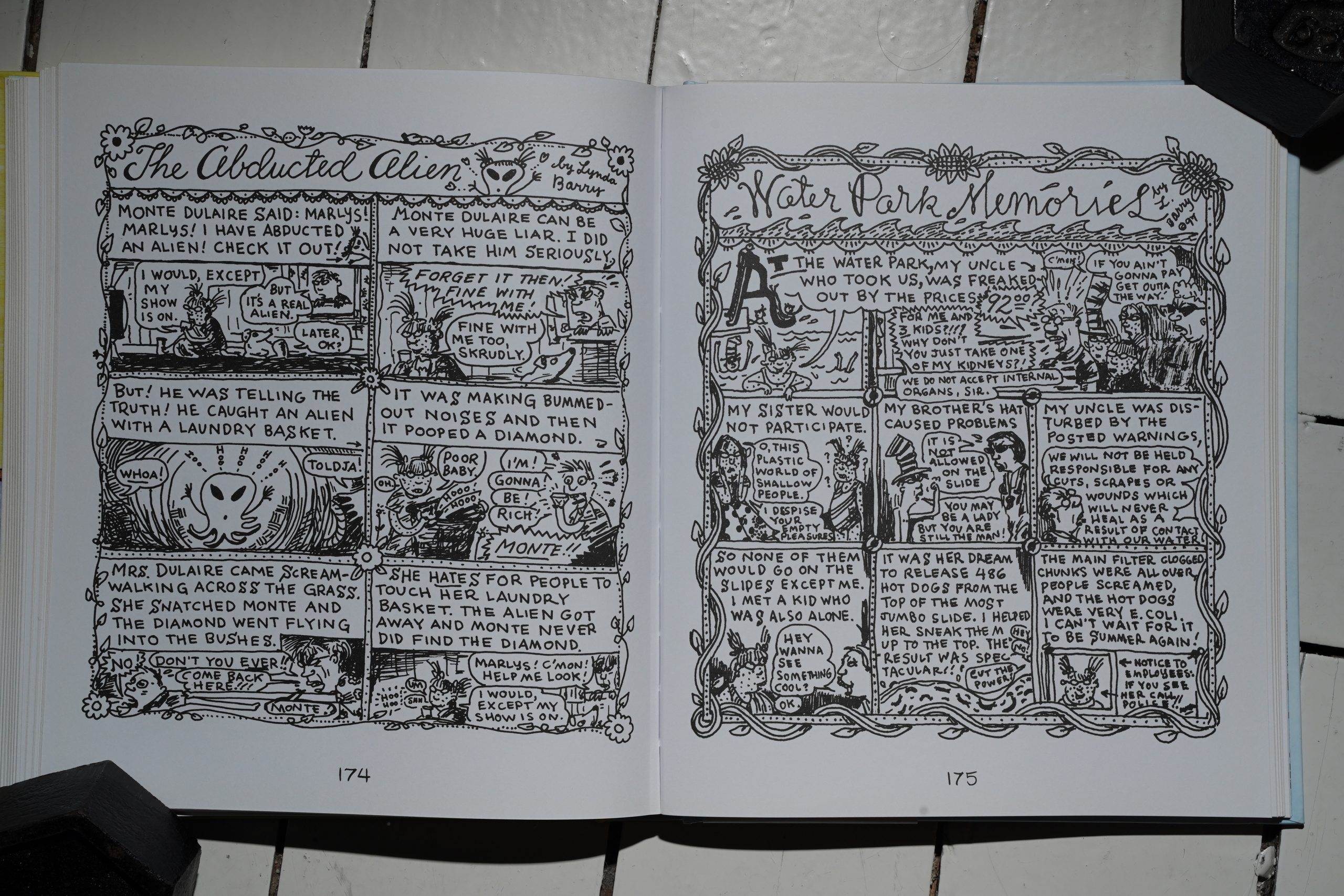 And then we get a bunch of pages done in a different layout — were these made for a different venue than the Pook comics? They seem to have been drawn very small and then blown up… or at least not reduced. The lines are very chunky. 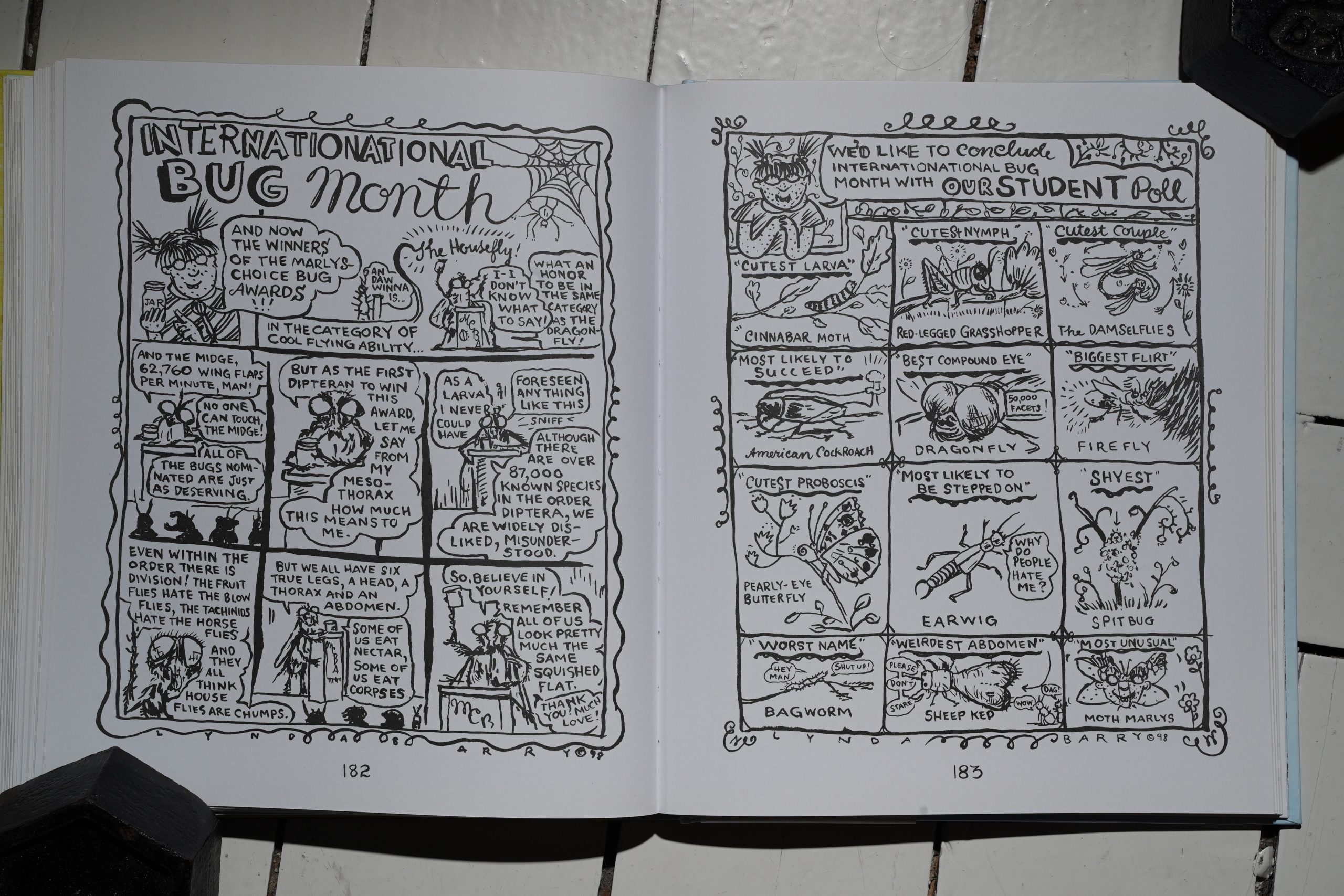 Lots and lots of pages about bugs. 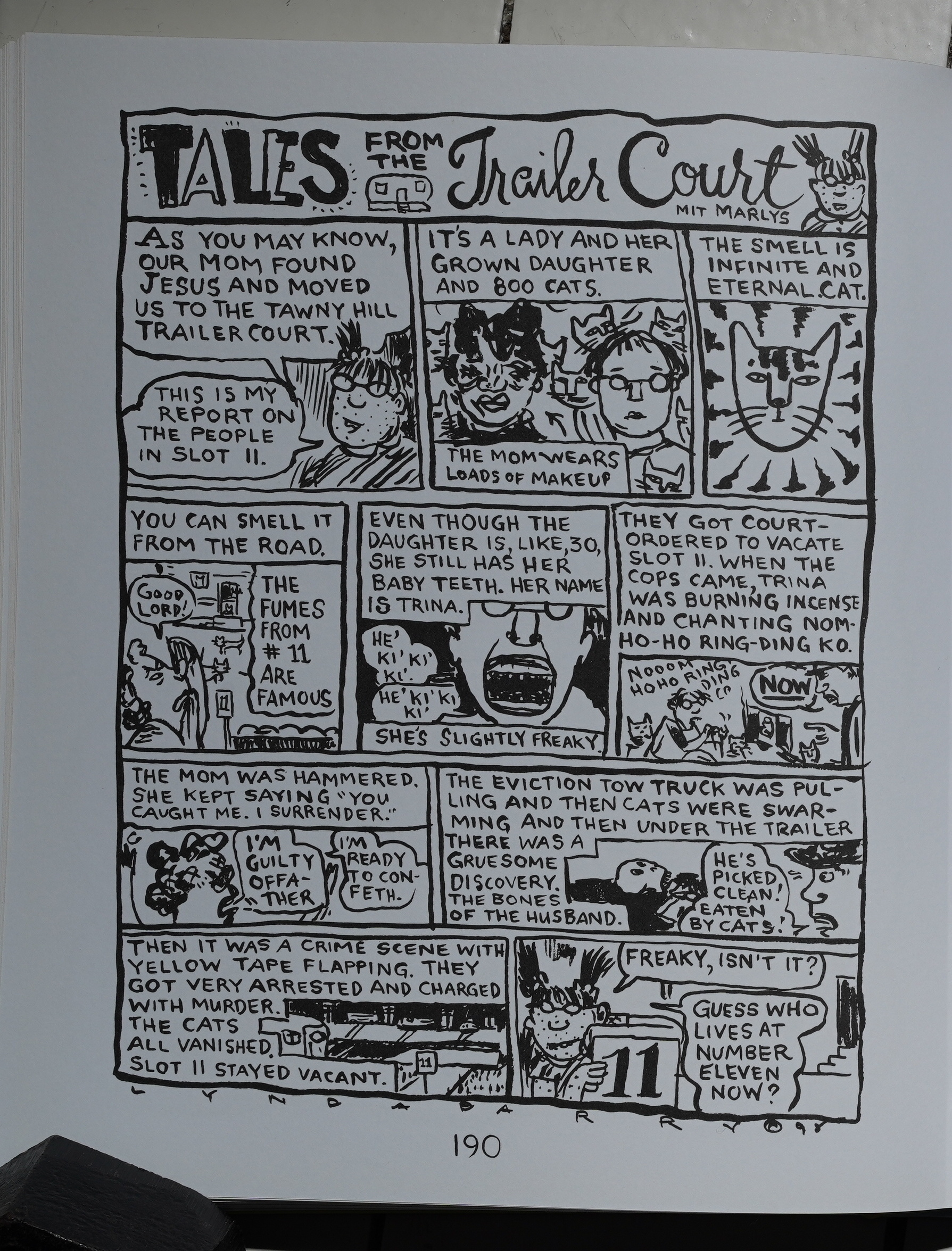 And then! Some plot! They’ve now moved to a trailer park. 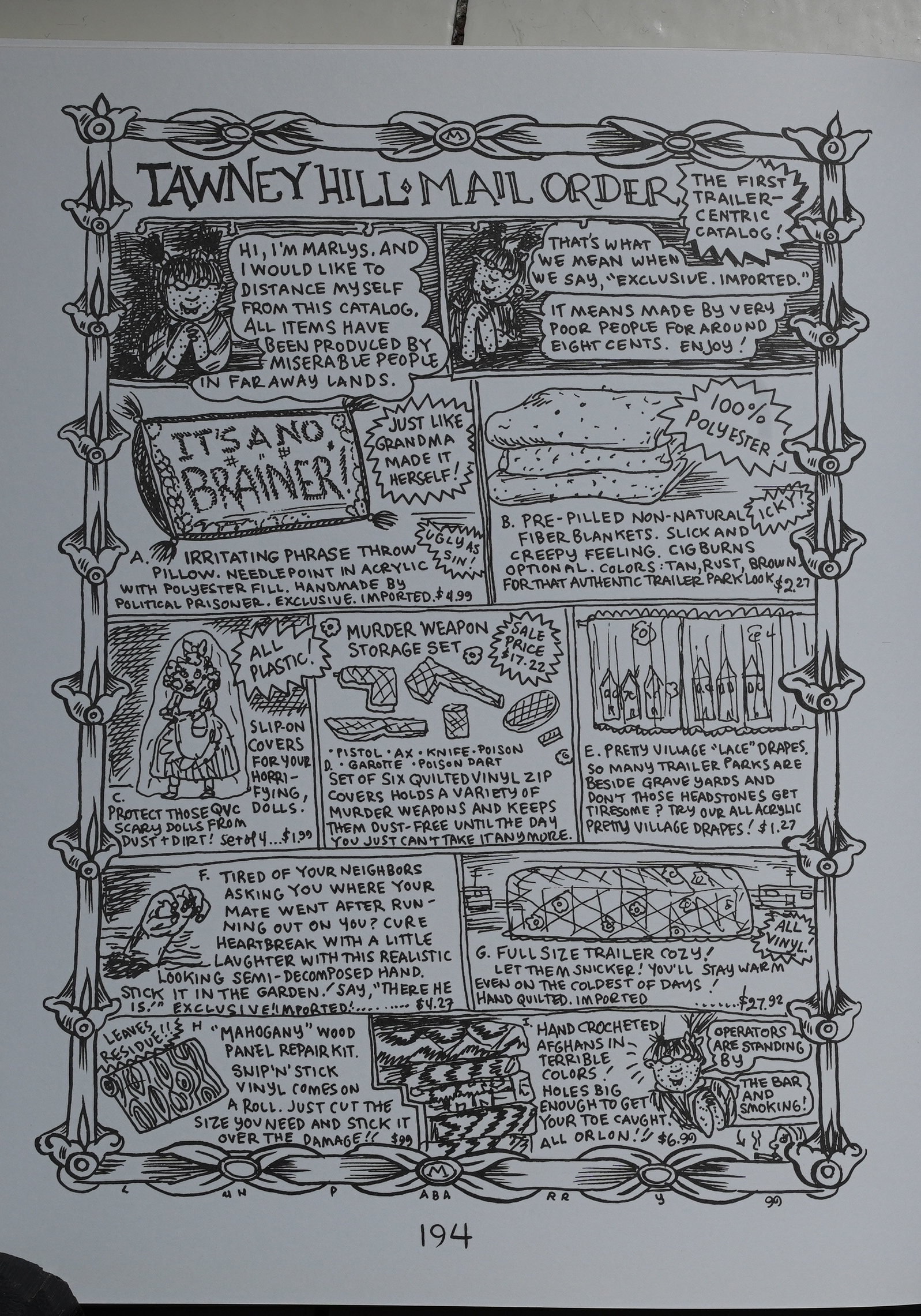 And the strips get funnier again. 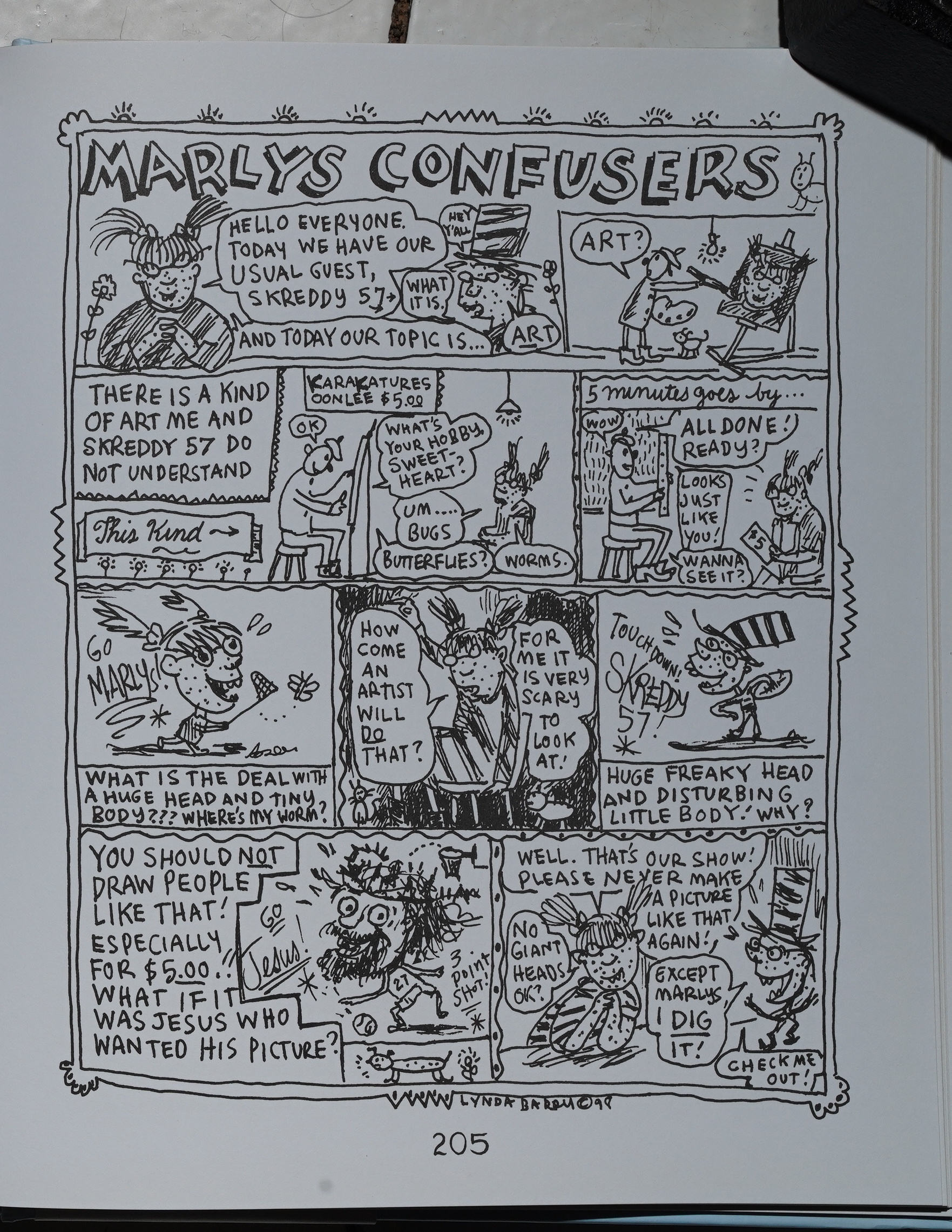 Yeah, what’s up with people drawing bobble heads? Those caricatures are repulsive! And don’t get me started about Funko Pops. Nauseating things. 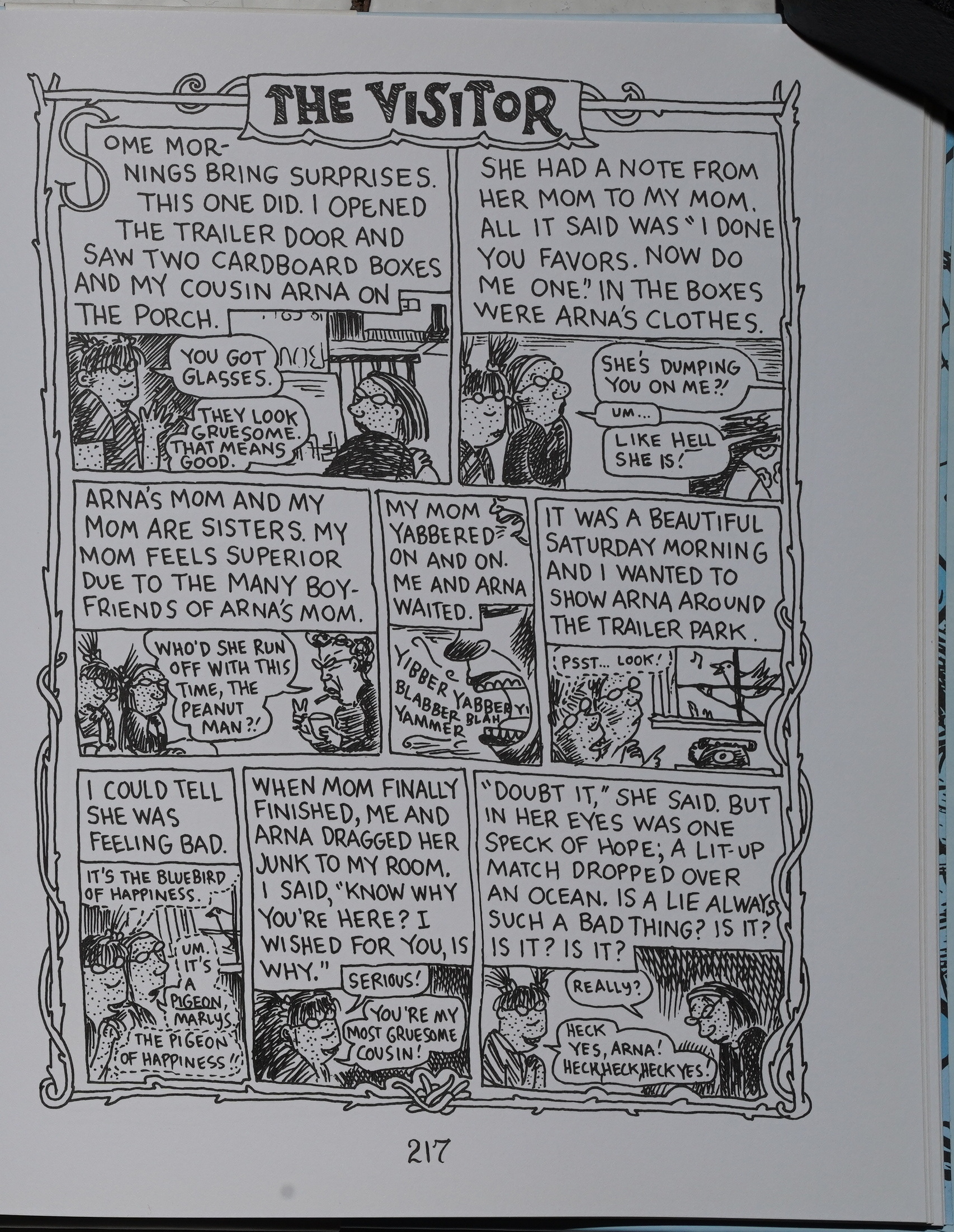 Arna returns! We get this slow drip of “real” Marlys strips in between all the pages about bugs… 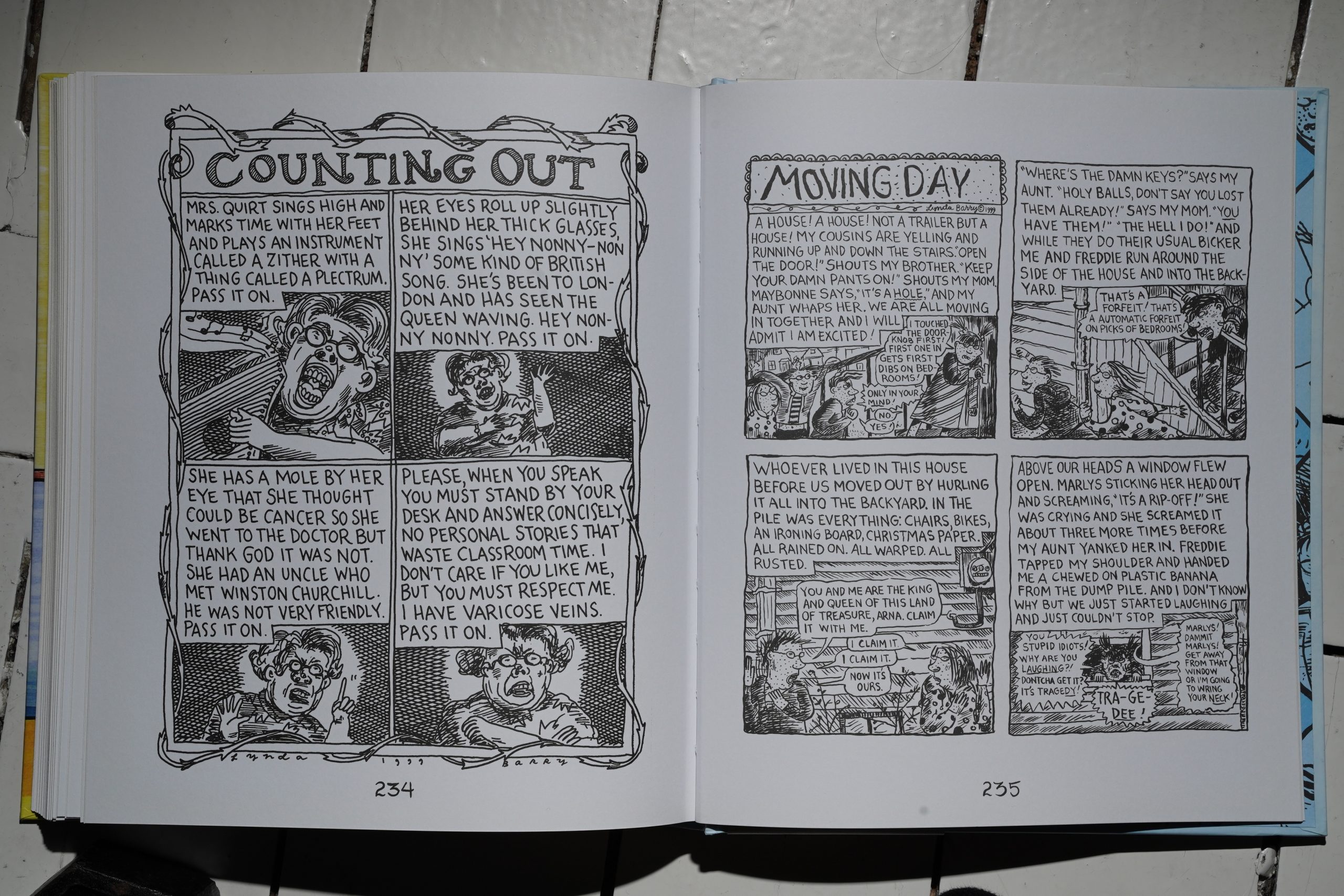 And then! Starting with strips dated 00, Barry snaps back to the style from the late 80s — fine, detailed brushwork, and a more day-to-day plot thing. It’s such a relief, because these strips are really, really good again.

THE! TOTAL! LIST!
lar, and/or otherwise most notable comic works that came out in the
year 2000. We list them here alphabetically, because at heart we are socialists,
and do not like to promote hierarchy when we can avoid it. Sort of unfortunately,

Lynda Barr’s flawed and chunky language, and corresponding unsmooth
drawing style have, in the opinions of many reviewers, lifted her right out
of the realm of comics and dropped her square into the lap of literature. Is
it right to grant someone so much approbation that they no longer fit into
a category of peers? Probably not, but her writing is so exquisite, it is dif-
ficult to limit her praise to that characterized by any sin-
field Of art. Barry is a genius, therek no getting
around it, and her dear darling sweetheart character
Marlys is the perfect vehicle for the underlying
The-world-is-so-dang-groovrsometimes-it-
breaks-your-heart message.
Take this example from “The Total Book,”
a four-paneled single page from 1988 describing
cousin Arnol& written masterpiece: “The most
exciting feature of the book, though, is called The
Earth’s Most ompletely Longest List in the
Galaxy and Universe, Of All Time. It turns out
just to be a list of anything, only numbered, so
by the end you can tell how many.” The final
panel has Arnold asking his sister to name things
while he checks if they arc already on the list: “Um,
ping pong balls?”
“Got it already. Something else.”
“Alfred on Batman.”
“Already got it. Something else.”
“A water wiggle.”
“Oh, yeah.”
For her ingenuity alone — forgetting for a
second about the clunky presentation distracting
you from the fact you’re looking at utter beauty —
Barry earns a place on my personal list of right ons.

She makes use of a powerful technique throughout the stories: often the visuals focus on a character reacting to a situation that has either already occurred or is now happening, while the characters’ narration tells the rest of the story. This implicates the reader, inviting her to fill in with her imagination, creating a rare level of interaction and play between cartoonist and reader.

But lots of artists are poignant, and lots of them “make you pause, cry and think.” Barry’s unique genius lies in her capacity to wiggle under your skin and, once there, to wiggle some more until you’re gasping and twitching, not sure if it’s with laughter or something else. She provokes existential squirminess.

It’s hard to find anybody being even the slightest bit critical:

The! Greatest! of! Marlys! is one of the best books ever written from a child’s perspective; laugh-out-loud funny, wise, silly, touching, awful, tragic yet ultimately so celebratory of how children survive, even in the worst possible circumstances, that Marlys Mullen is a hero as great as any to be found in fiction.

Marlys is a best-of collection from Barry’s long running comic strip Ernie Pook’s Comeek. The strip follows the adventures of eccentric eight-year-old Marlys Mullen along with her family and friends as they maneuver through the ups and downs of childhood. Each character is spot-on in the bizarre, delightful weirdness of being a kid. Marlys’ enthusiasm for life is endearing, and it’s rare to see such an accurate and nuanced depiction of an eight-year-old.