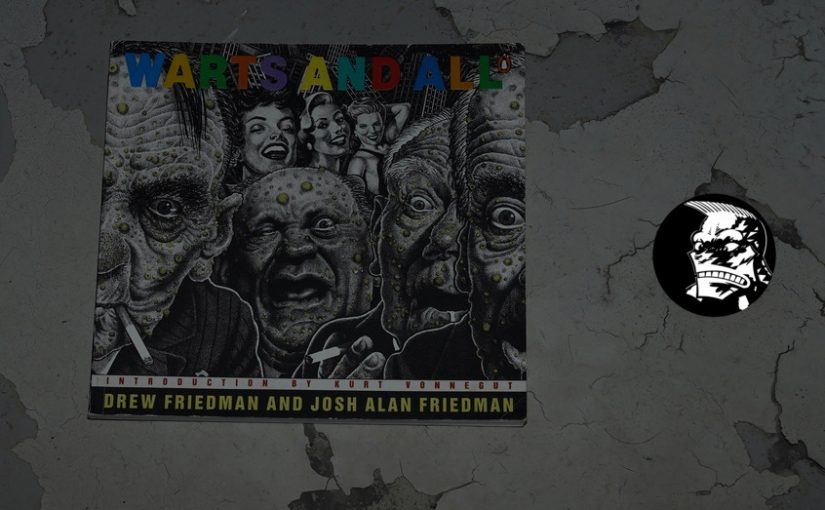 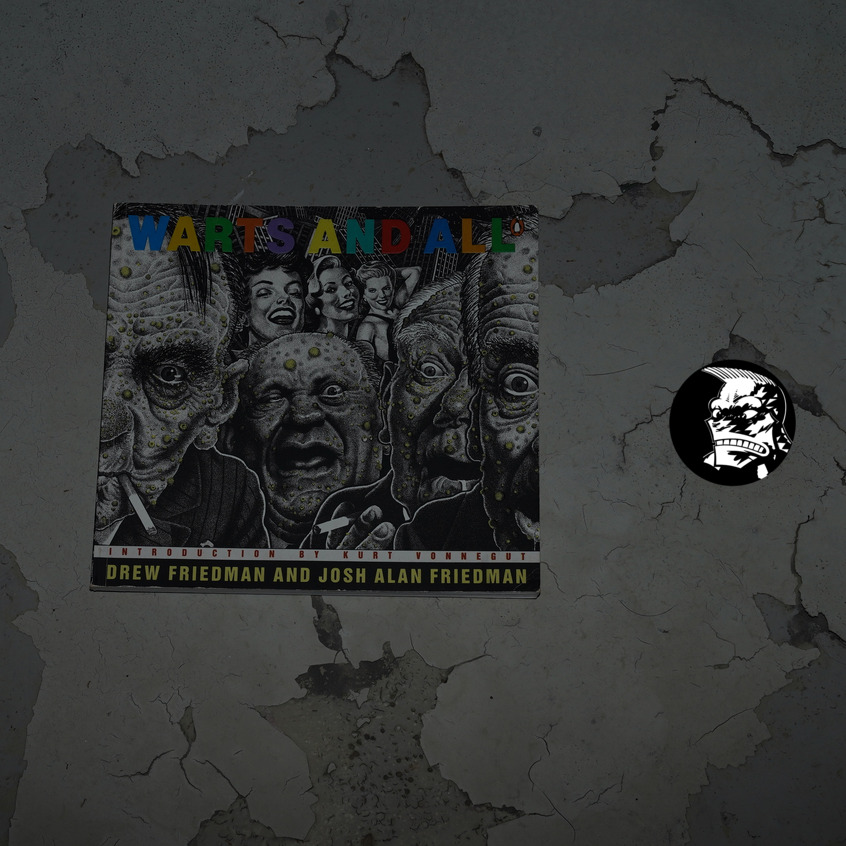 Warts and All by Drew Friedman and Josh Alan Friedman (204x190mm)

This is a very nicely designed book by the Raw crew. 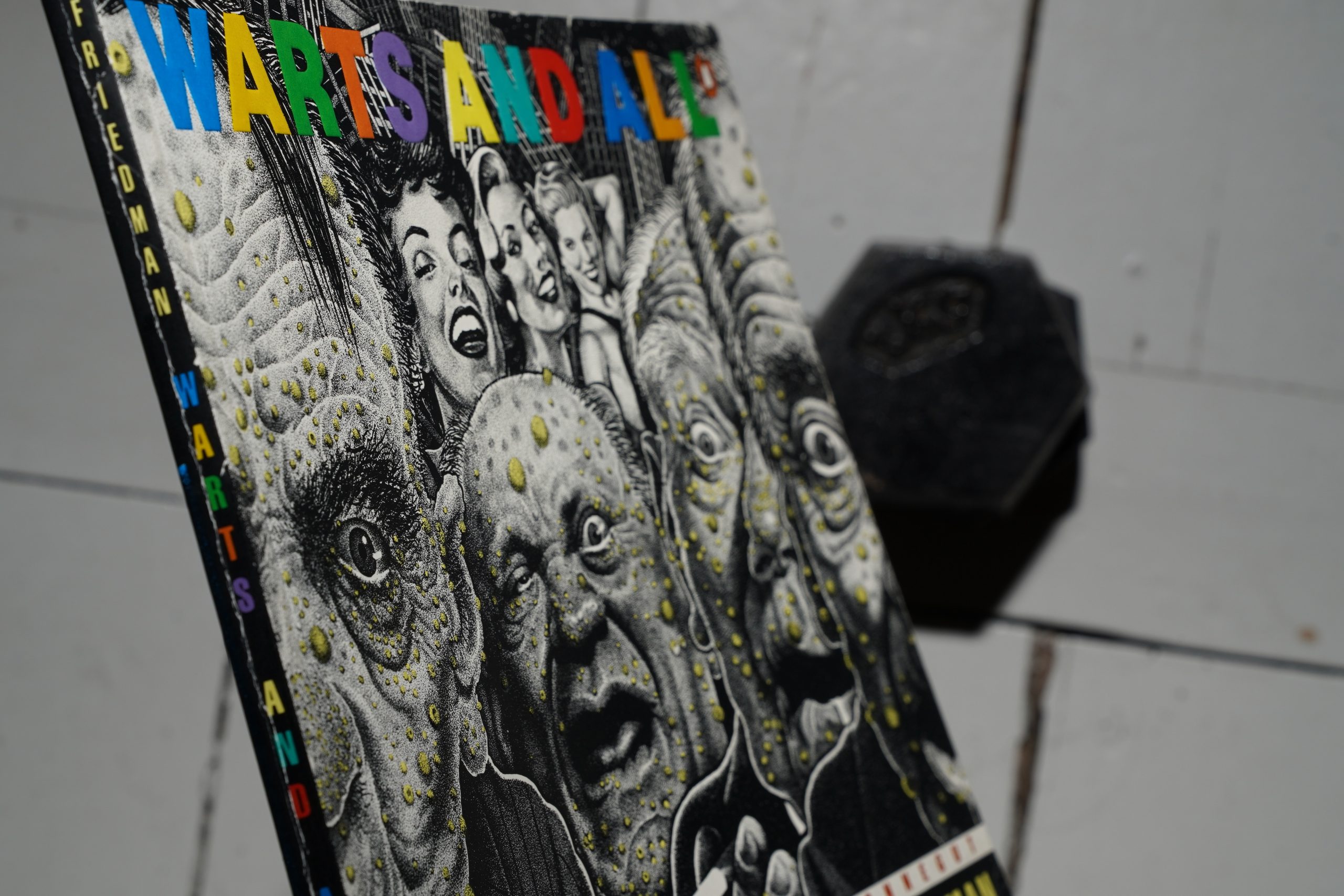 It’s probably not visible here, but those yellow warts are embossed — they give the cover a sickeningly tactile feel. It’s really cool, but… does it shift copies? I think the general effect is more eww than yay? 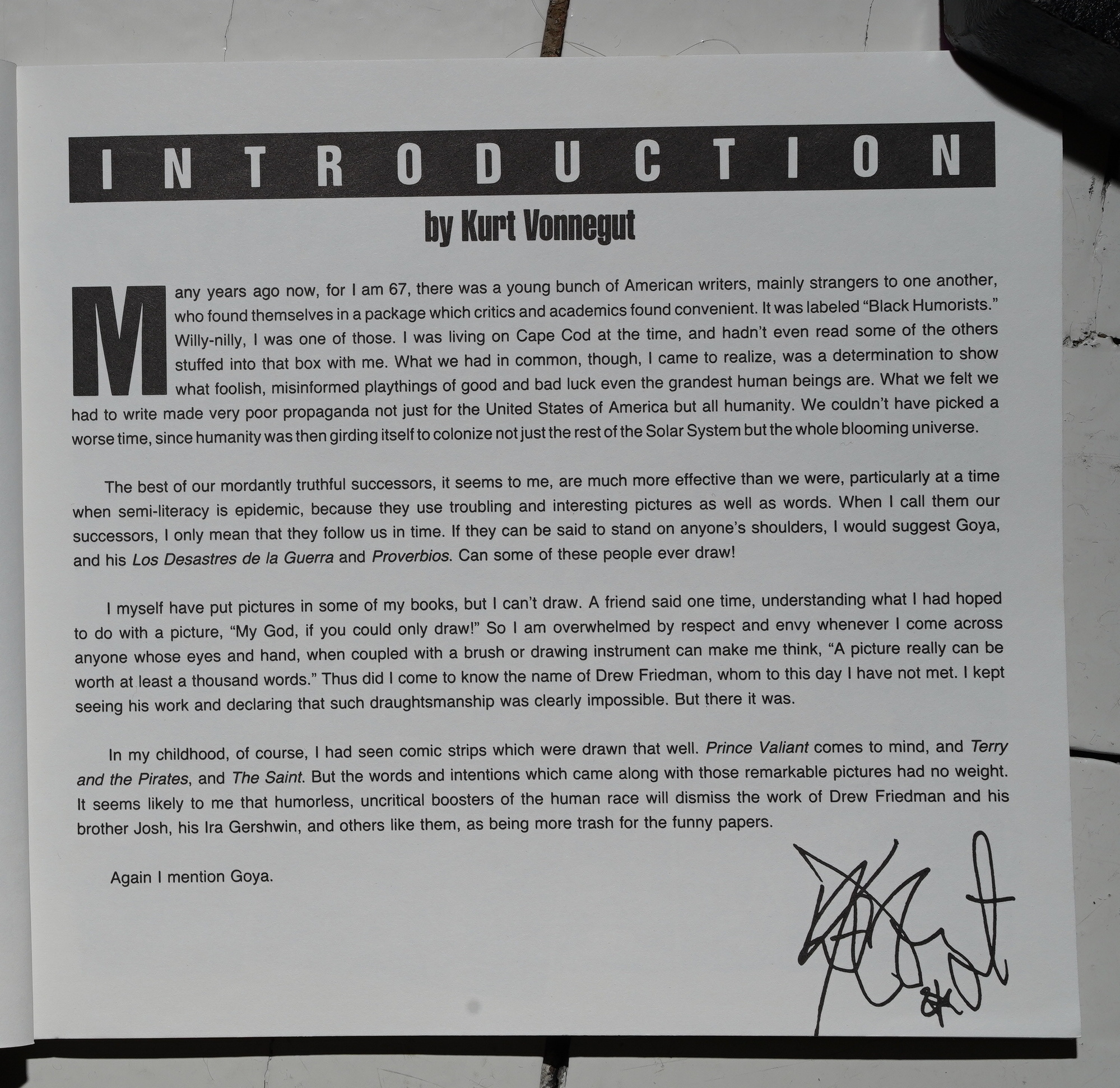 Gotta have an introduction, so here, at random, is Kurt Vonnegut. 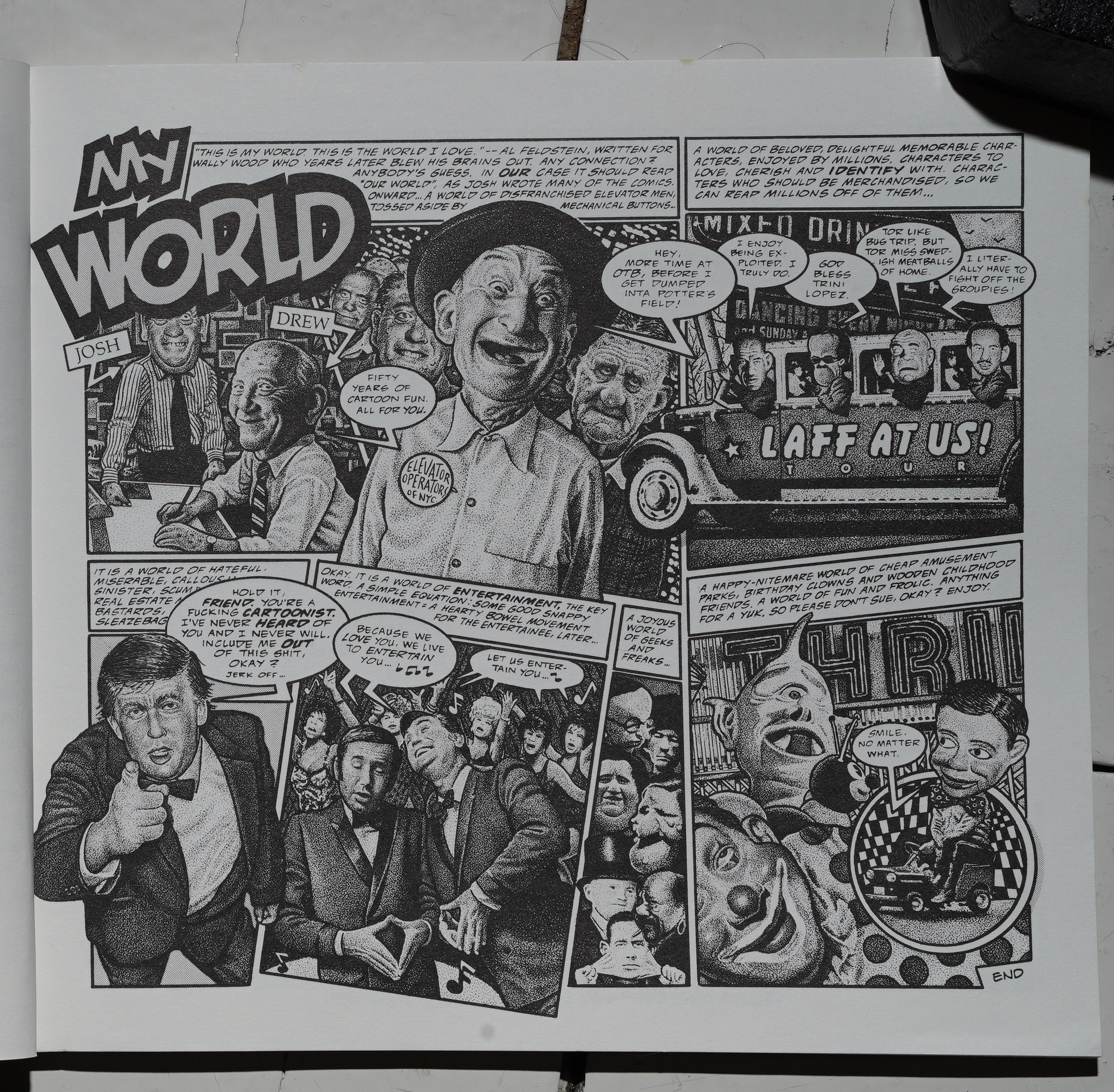 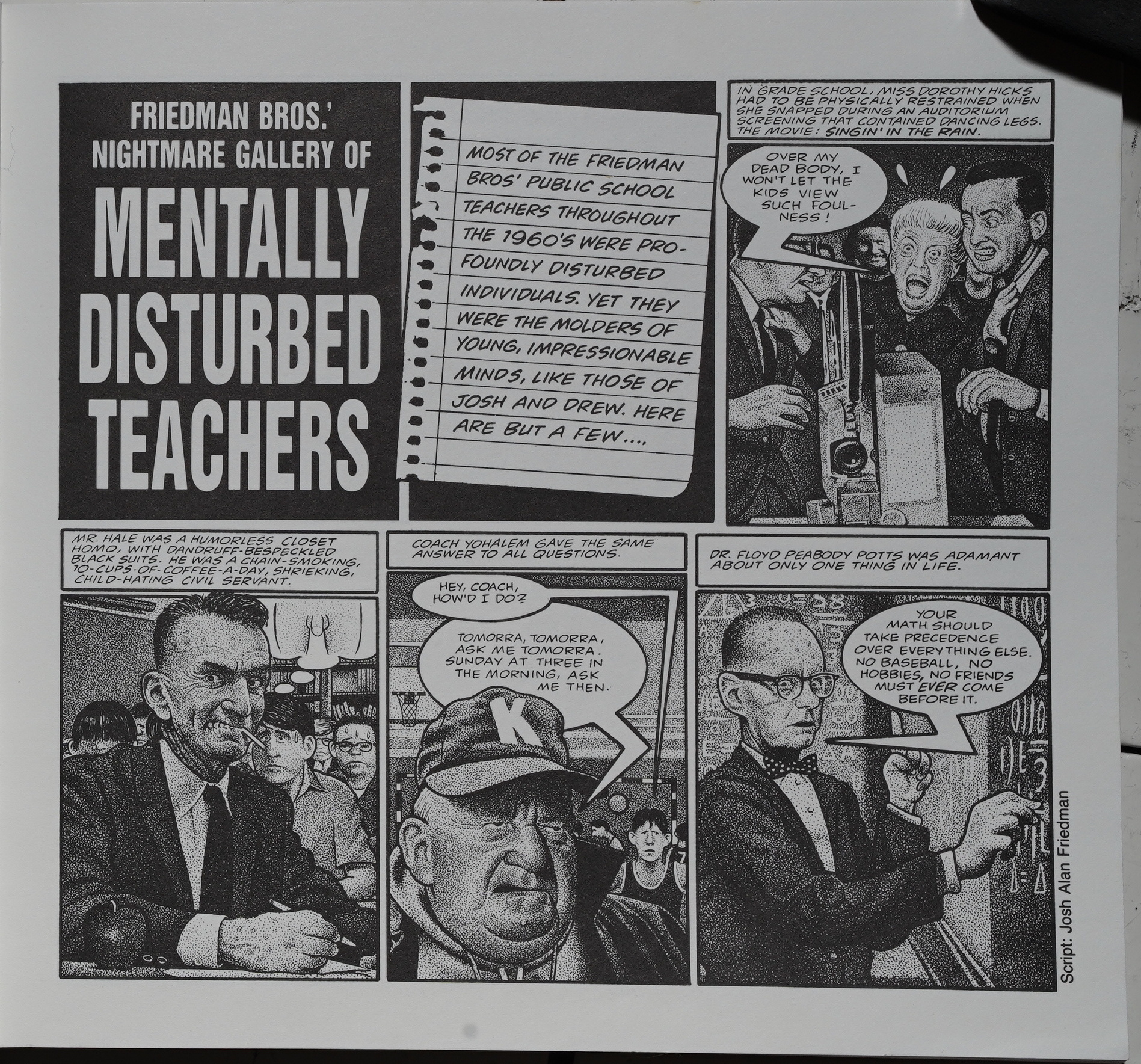 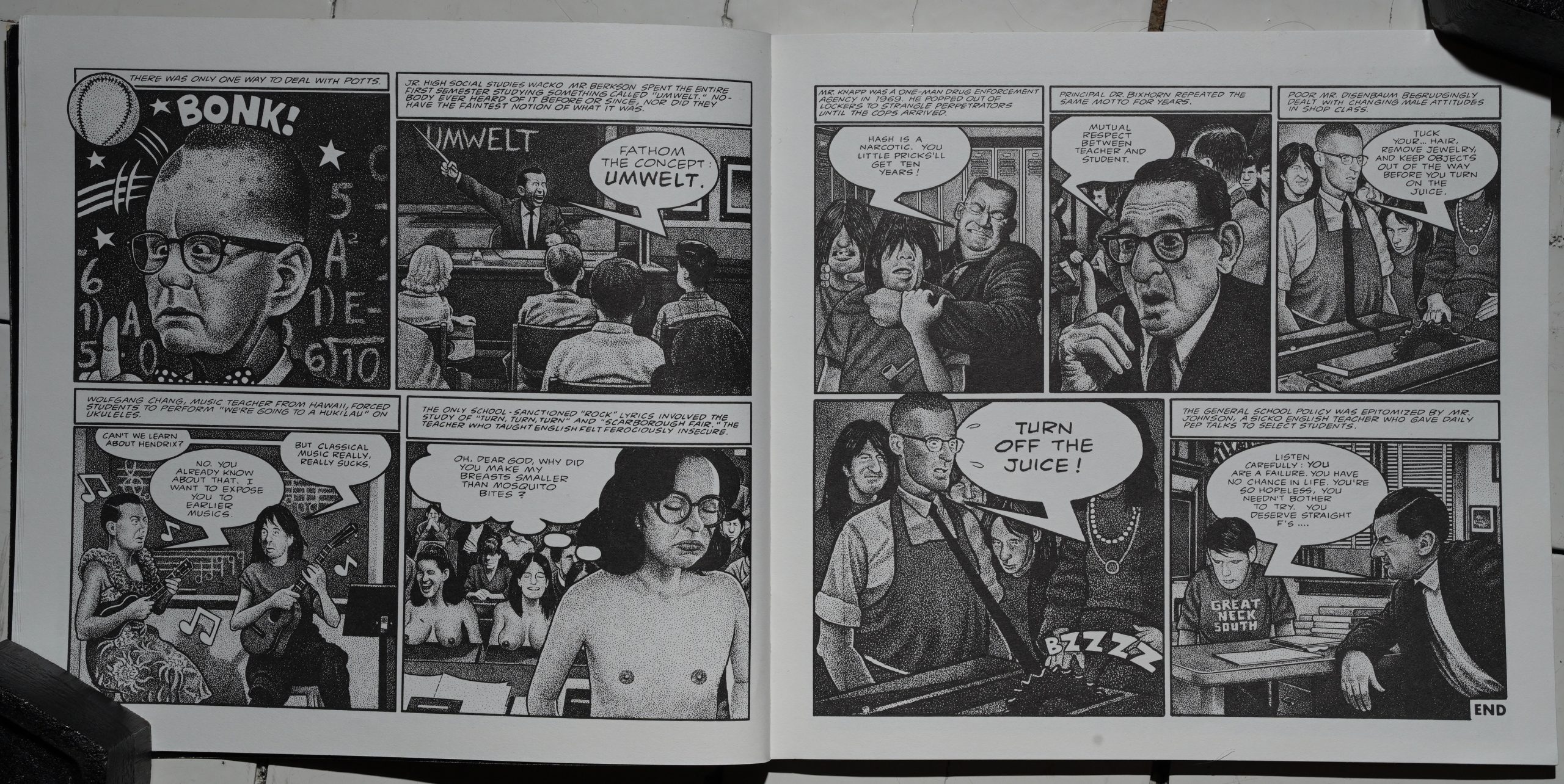 The Friedmans are famous for doing oldee tymey actors and entertainers in this insanely meticulous style, of course, so I was pretty surprised to find that a sizeable part of this book has nothing to do with those actors. Instead the Friedmans go after other targets — like apparently their old teachers here. 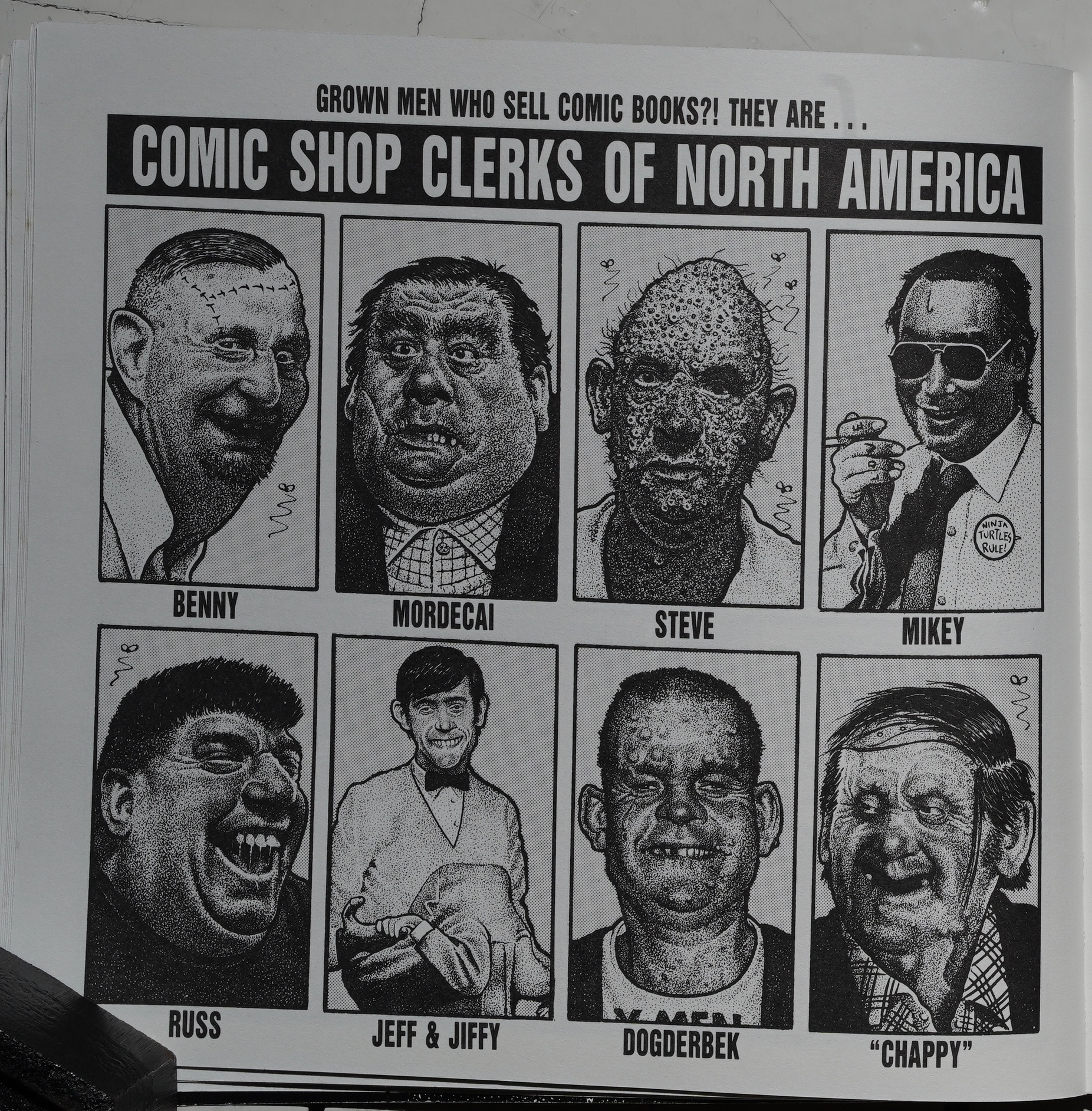 Seems accurate. I remember reading something from some comic book type about how disrespectful this page is. Yeah! 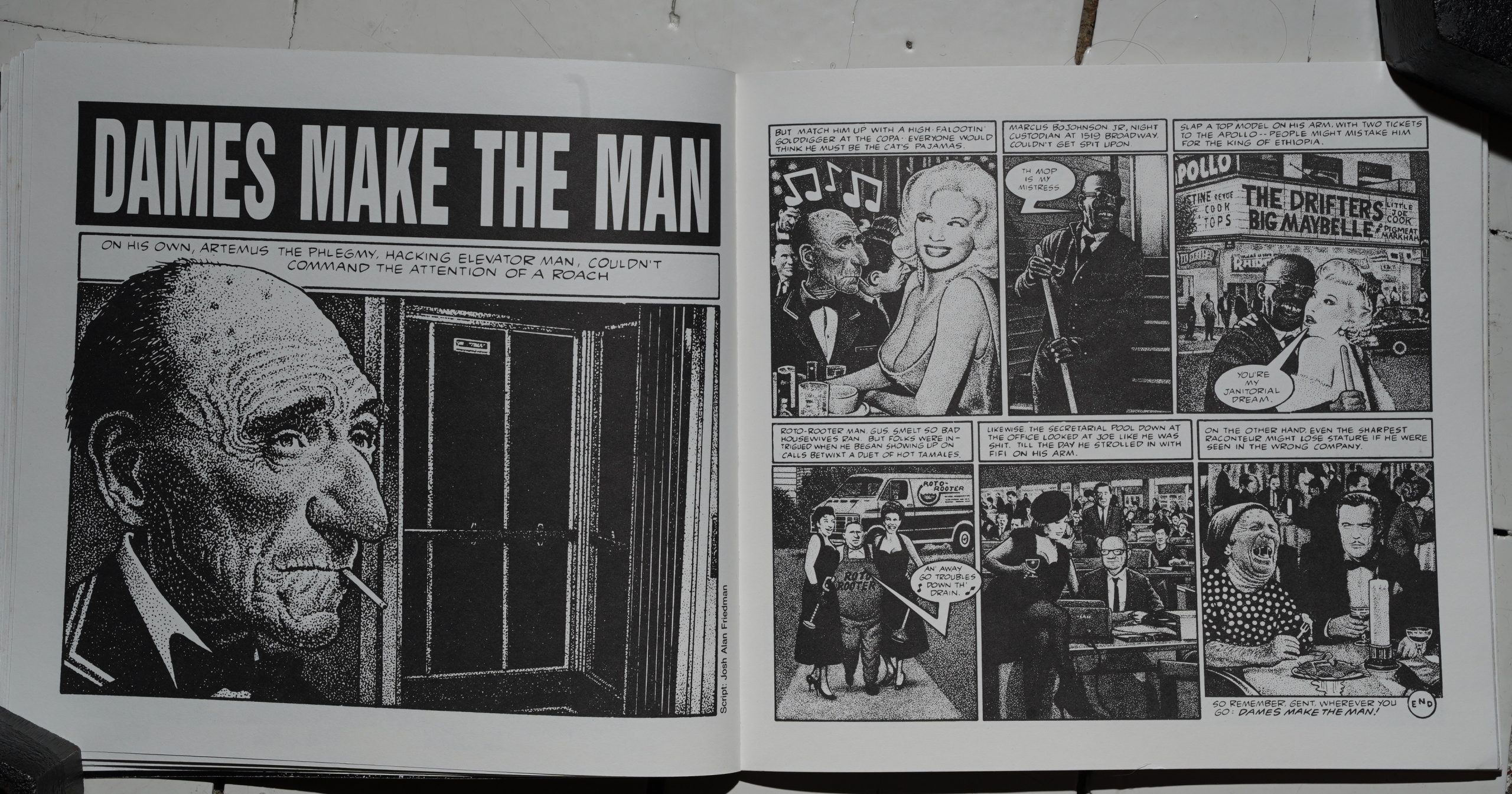 The format of this book is perplexing. I mean, the physical format — in dimensions, it’s a bit like a sawed-off album, which means that most of these pieces have been reformatted down into this format. If that’s the case, it’s understandable — because this book is just a bit more than 80 pages, and if they’d done this in the more usual format, it would have been too thin for the bookstore market.

But it means that some of the pages look pretty jarring. Above, the left-hand page has obviously been blown up from a much smaller drawing — you can see the individual dots. And… it looks like it was taken from the first panel on the right-hand page? According to comics.org, this was originally published in the magazine-sized Weirdo, so… how was it formatted there? (I’m to lazy to pull out my Weirdos.) 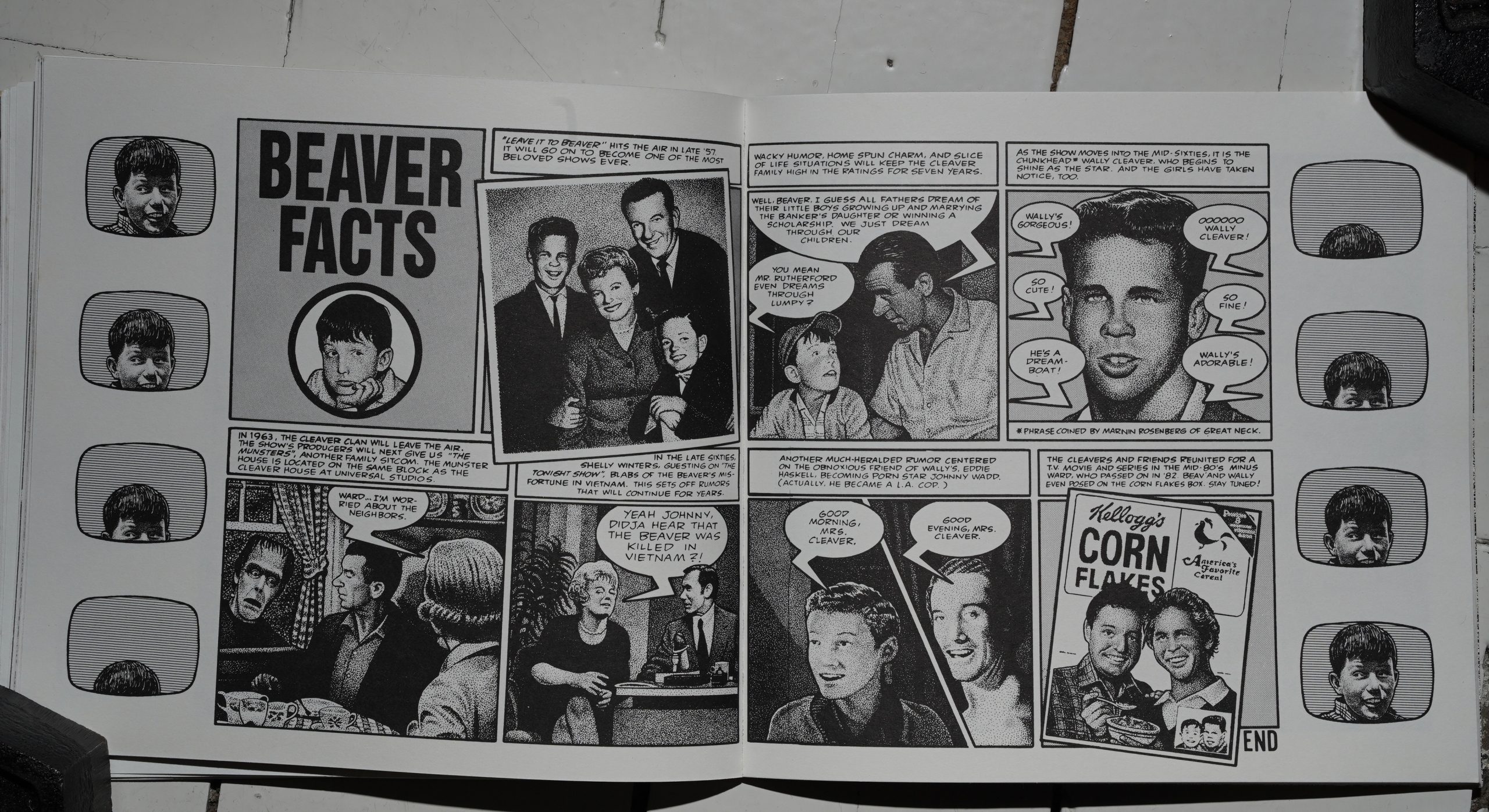 And this was presumably formatted totally differently originally? Or is it new here? 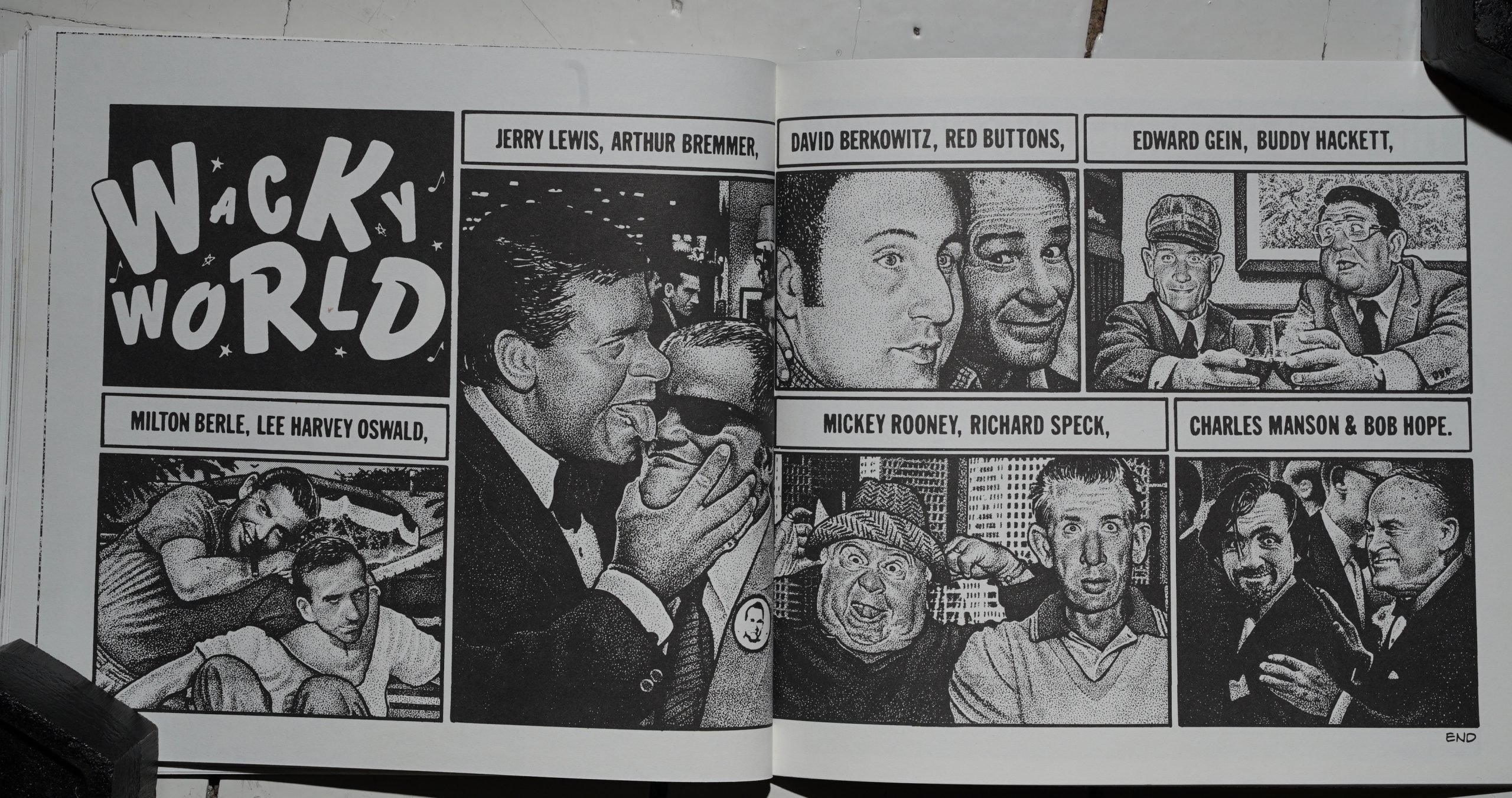 The thing with Freidman’s artwork is that even if he’s extremely photo-referential, he uses that to his advantage with these mash-ups — making them look as real as anything else. 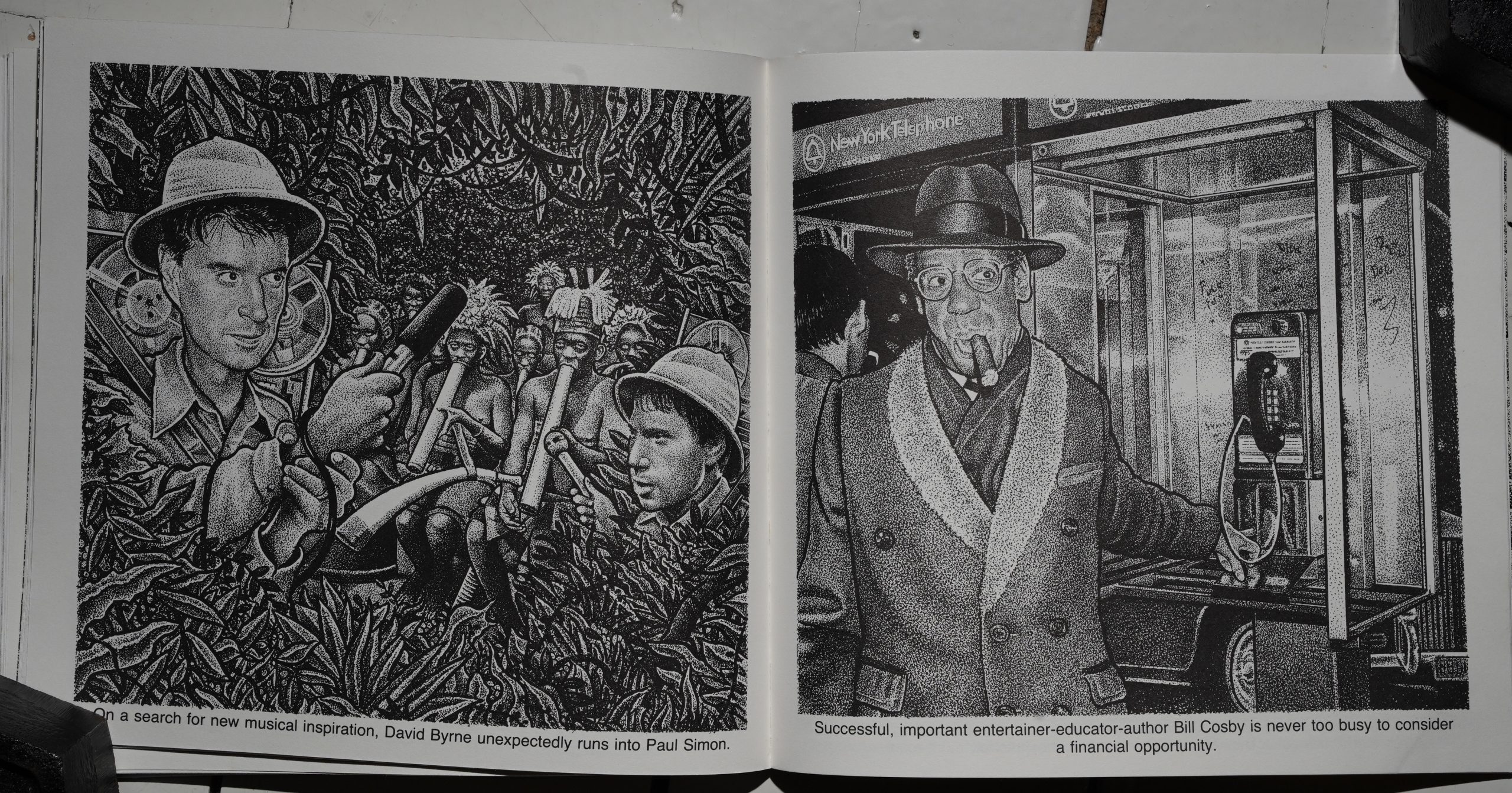 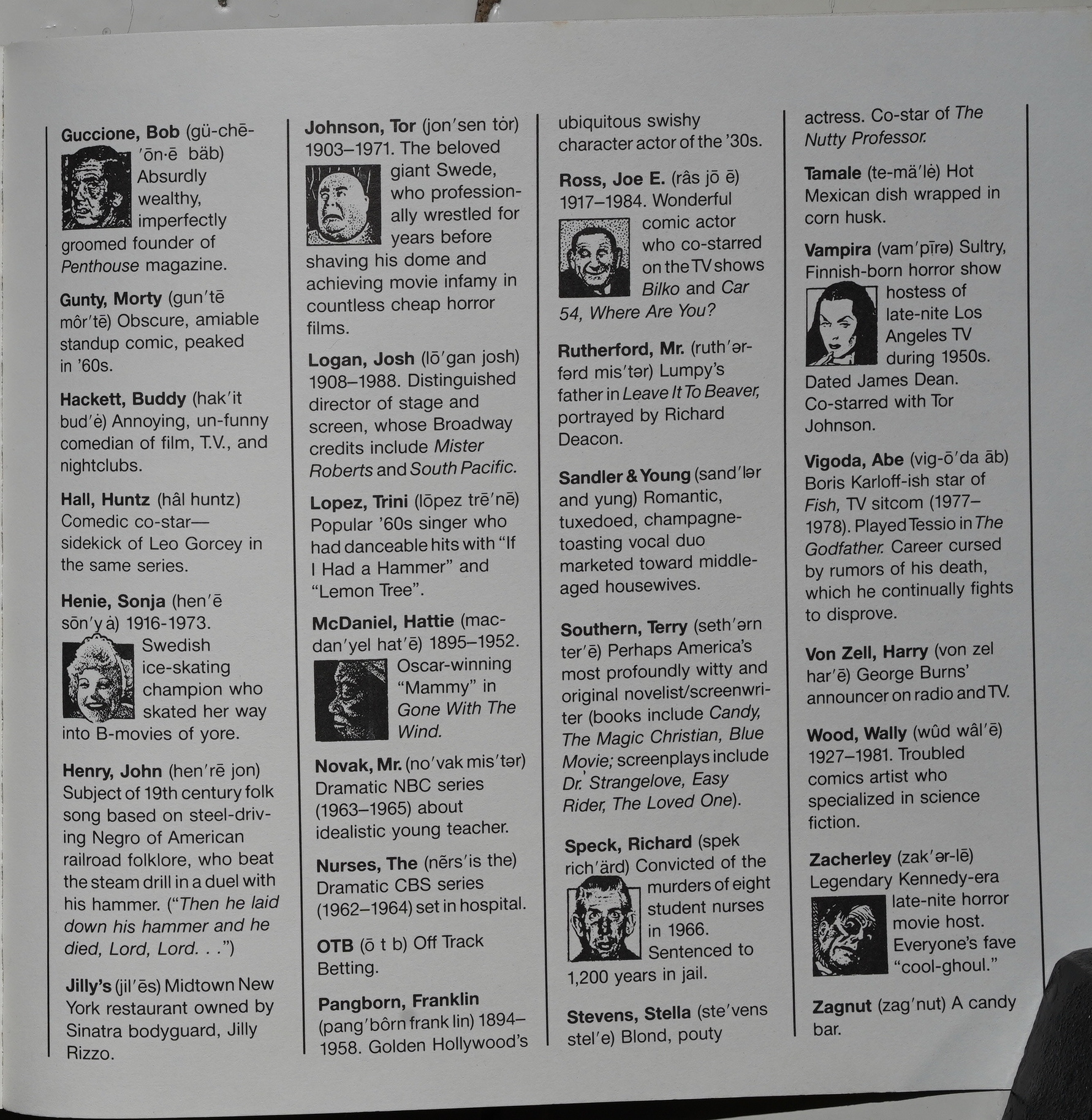 And then we end with a glossary for those that don’t know who Vampira is (this is meant for the bookstore market, after all).

Strangely enough, four years after Penguin published this book, Fantagraphics published a new edition. You’d think that Penguin would have marked clout to saturate the world with copies, but perhaps they just didn’t really care?

Drew Friedman is interviewed in The Comics Journal #151, page 85:

A FEW WORDS ON WARTS AND ALL

KELLY: Who came up with the idea to do the raised warts
on the cover of Warts and All?
FRIEDMAN: Art Spiegelman.
KELLY: And how were you guys able to convince Penguin
to do that?
FRIEDMAN: I came up with the title, Warts and All, and
the image of disgusting faces with warts. Art saw the art-
uork, and he said, “Boy, it would great to emboss these
warts, and have little hairs popping out of them.” And I
said, “Yeah, it would be great.” And he had enough power,
I guess, with the editors at Penguin to ask for that and
get it.
I was happy with it. I give Art credit for that. The
whole concept of the book, basically; a book that had been
at Doubleday, under a different title — it was going to
be the same format as Persons Living or Dead. Double-
day gave us an advance and everything, and then pulled
out when they were bought out by this German guy who
cancelled 50 to percent of the books they had scheduled
— our book was one of them. So we were fishing around
for a new publisher. I wanted to do it with a major; I didn’t
want to do another book with Fantagraphics at that time.
I wanted to to get it into major I have no regrets
about doing the first book with Fantagraphics — I was
delighted when Gary called and said, “We’d like to do
your book,” because I was ready to do an anthology. But
the second book I really wanted to be iO Waldens and B
Daltons, and Gary couldn’t get the first book in there, for
whatever reasons. So when it was dropped by Double-
day, Art called and said, “I hear you need a publisher.
Let me try to get you into Penguin; I have this deal with
them where I’m developing books.” Penguin was doing
RAW. So I said, “Great.” It was a long process before
Penguin agreed to do it.
Art had this idea of cutting the strips up and making
a square format, and when he first mentioned this I was
horrified. I said, “Wait a minute, how can you do this?”
But when he actually’ showed me what he had done, I really
thought it worked well. I supm»se some grople Mould think
it was cheating a little bit — sort of like stretching a book
out. And it was, but I was delighted with the results. It
gave it a story-book kind of feel rather than a presenta-
tion of comic strips. So I give him a lot of credit for that.
It worked Out well.
KELLY: How did the book do?
FRIEDMAN: As far as I know, it’s still racking up sales.
It’s up to 15000 now, last I checked. Obviously, it’s not
a best-seller like Maus, but not much is. I think it did well;
I don’t keep tabs on that kind of stuff much. I just asked
my editor last Christmas what the sales were, because
Newsweek had plugged it, and I wondered if the plug had
helped. And he said, “Yeah, the plug really did help.”
As far as I know, it did well. So now I’m going to have
enough work for another book, hopefully in a year or so.
That’s the plan. I might even want to go back to a comics
publisher for the next book, because comic book stores
had a hard time getting warts and All. So it’s like it’s one
or the other. You want your book to be in comic book
store, and you also want it to be in major bookstores. But
unless you’re Maus, you don’t really have it both ways.
KELLY: Or Dark Knight or Watchmen.
FRIEDMAN: Right.

Hah! I knew it must have had been cut down to fit that format.

KELLY: ‘ •Comic Shop Clerks of North America..
FRIEDMAN: That pissed off a lot of people. Although it
was turned into a T-shirt and did real well in comic stores.
I heard a lot of comic shop clerks got a big kick out of
it. I also heard that actor John Goodman loved it…
KELLY: So who did it piss or.
FRIEDMAN: Don Thompson types. “How could anyone
make fun of the fine folk who sell comic tx)0ks?” Basically
stuff like that.
KELLY: %ére these faces based on real people?
FRIEDMAN: Some of them are, yeah. I can’t really say
who, but there’s one in there who’s the son of the former
publisher of National lampoon. He actually got a kick
out of it.

Warts and All by Drew Friedman
and Josh Alan Friedman (Penguin,
$9.95) is the mistitled second collec-
tion by the pointillist caricaturists who
specialize in celebrating the grotesque
side of pop culture. (Actually, Drew
draws, Josh Alan writes.) Some of this
volume’s victims are predictable—
Friedman family standbys Tor Johnson
and Bela Lugosi both show up more
than once, though this time out the
litigious Joe Franklin stays at home
completely. But there’s a couple of
digs at the sad story of Rondo Hatton
(who during the 1940s used his own
facially disfiguring disease, acromega-
ly, to get cast in horror movies), and
Joey Heatherton (whose real life
deterioration as an actress and as a
human being is the subject of the long-
est and most resonant story in the
book). The full-page shot of Ernest
Borgnine and Ethel Merman avoiding
the consummation of their notorious
eight-day marriage isn’t recommend-
ed for anybody who needs absorbent
underwear. Still, I’m right when I say
the book’s mistitled. It should be
called Warts, Especially.